Who's gonna tell you things aren't so great

Conneaut Lake Park won't open for the summer. This is the first park we're regular visitors to that's announced 2020 to be a bust. We had missed the chance to get there last year, but felt all right, because 2018 and 2019 were such good years. They even earned more than a million dollars in revenue last year, thanks to the water park being open. (And was that for only a month? Or was that in 2018 that they opened the park in August and it gave them a recent-record year?) Anyway now we're worried about the park crashing again. If their creditors are decent they'll hold off, since there is no way that this reflects on park management or the viability of the park as it exists, but ...

In other circumstances, too, this would have been the first full day of Anthrohio. Probably we'd have gotten to opening ceremonies with minutes to spare, even though they start late, and where we wouldn't understand the theme of the convention's running plotline. Maybe we'd have had some of our panels today, although history suggests that, like, the Bunnies SIG or the Raccoons-and-Procyonids SIG would be stuffed into a Sunday early-afternoon block. It just seems like that, anyway. I bet we'd gotten Skyline chili at least once and talked about how we ought to go to that downtown Columbus White Castle.

Well, finally, let me get back to amusement park photographs. In September 2018 we took a weekend day to pop down to Cedar Point, and that was a great decision. It let us appreciate some of the Halloweekends stuff while the weather was really good. Particularly it let us see the parade, too, so we didn't have to worry during our proper Halloweekends visit that we might miss the parade (or that weather might cancel it). So here's the start of pictures from that little extra visit. The entrance to Cedar Point, with GateKeeper rising above it, and the train making one of its two loops over the entrance. Not the one that passes through the keyholes (which is the more exciting, of course) but the one on the return leg of the ride. ``How'm I doing?'' Skeleton greeting folks at the entrance. Note also in the far right that the Ocean Motion swinging-ship ride has its temporary, seasonal name. 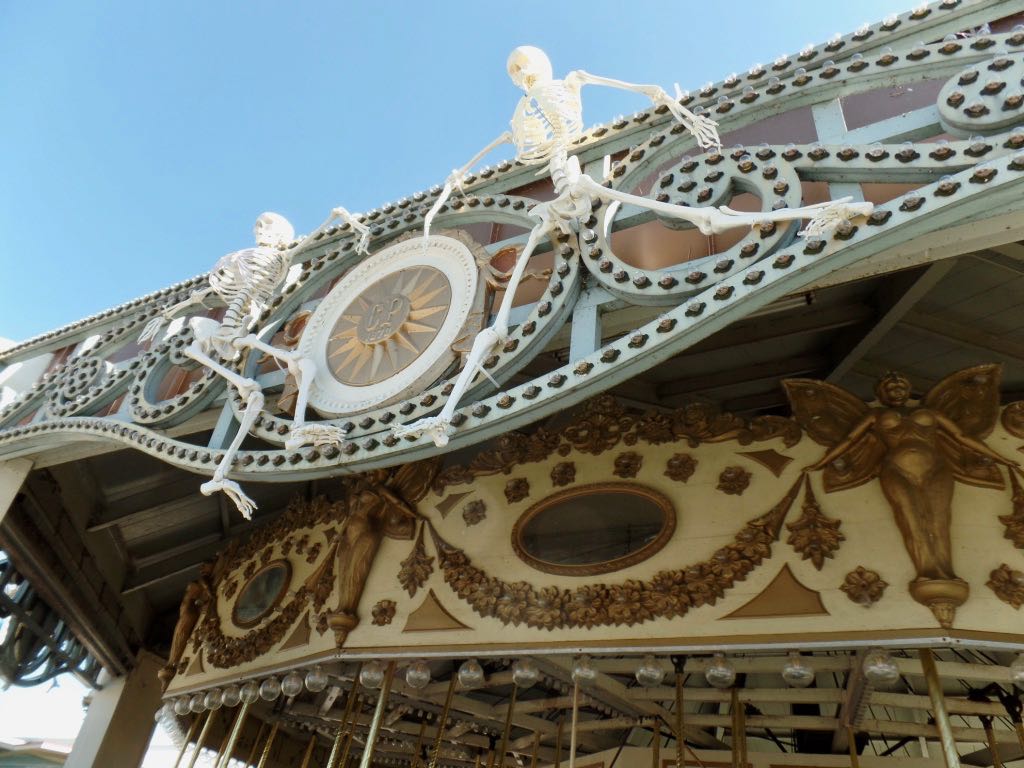 Skeletons hanging out on the Midway Carousel, in a curious parody of the Muller fairy-women along the rounding board. Actually they're probably not meant as any kind of parody, there. 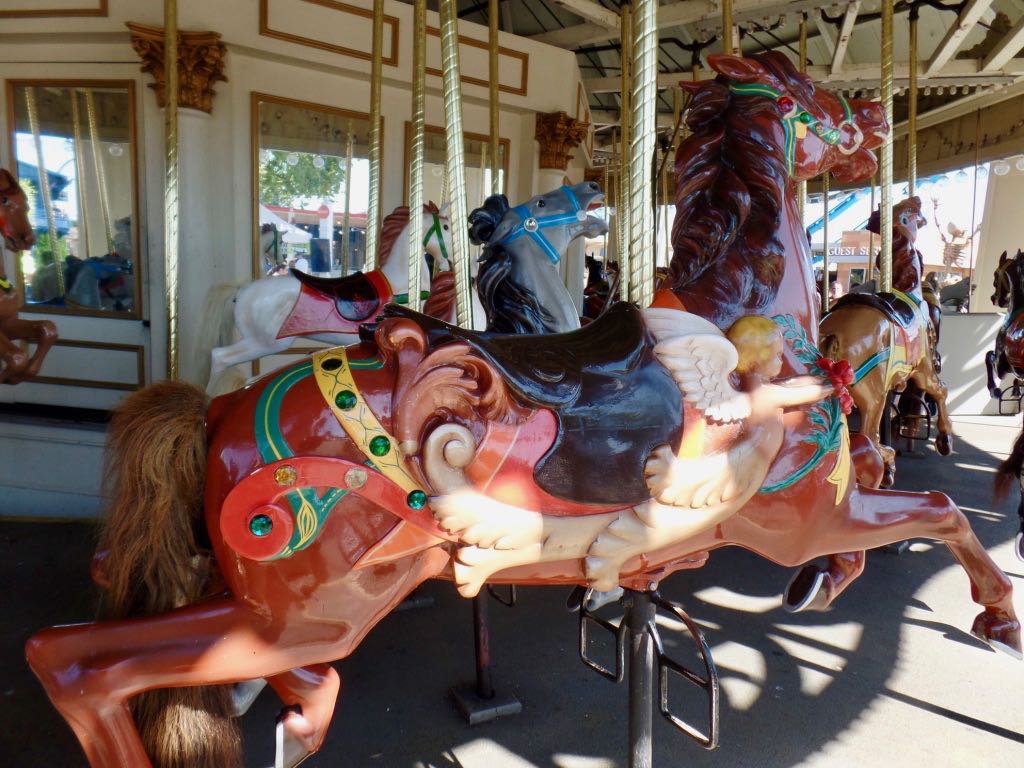 One of the Midway Carousel horses, this one with an angel secondary figure. It's possible that this is where

bunny_hugger started her project to ride every single horse on the carousel; we'd have to check her notes. 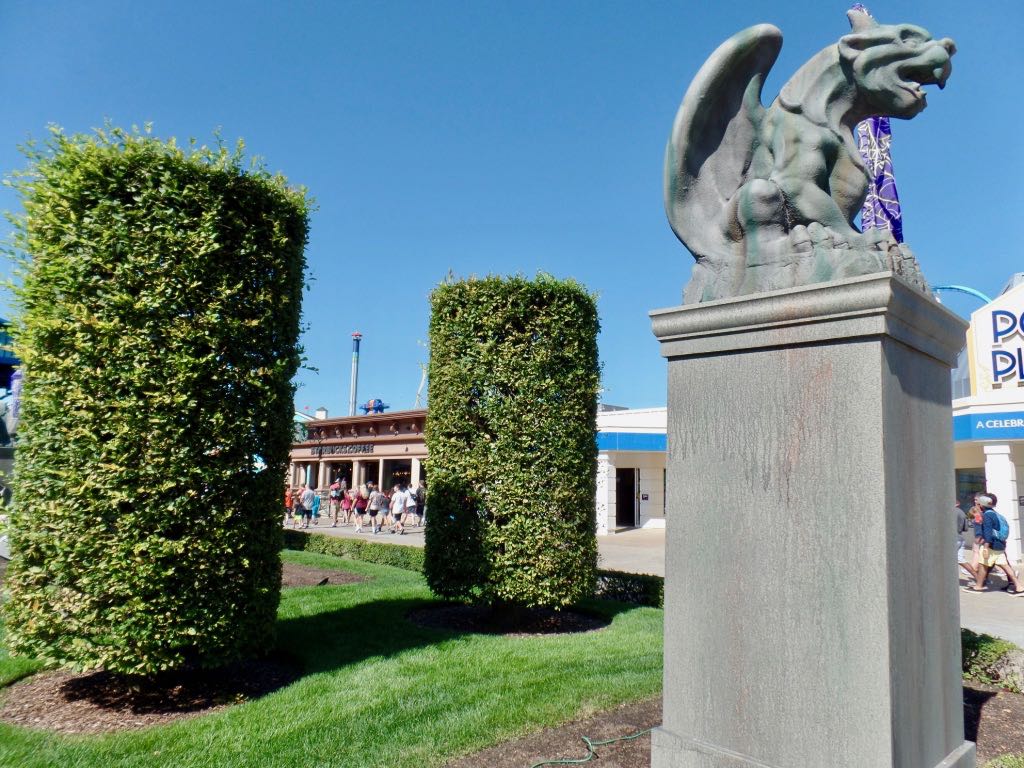 Gargoyle set up at the front of some of the midway lawns. Also, boy, this weather is about as anti-Halloween as it's possible to get. 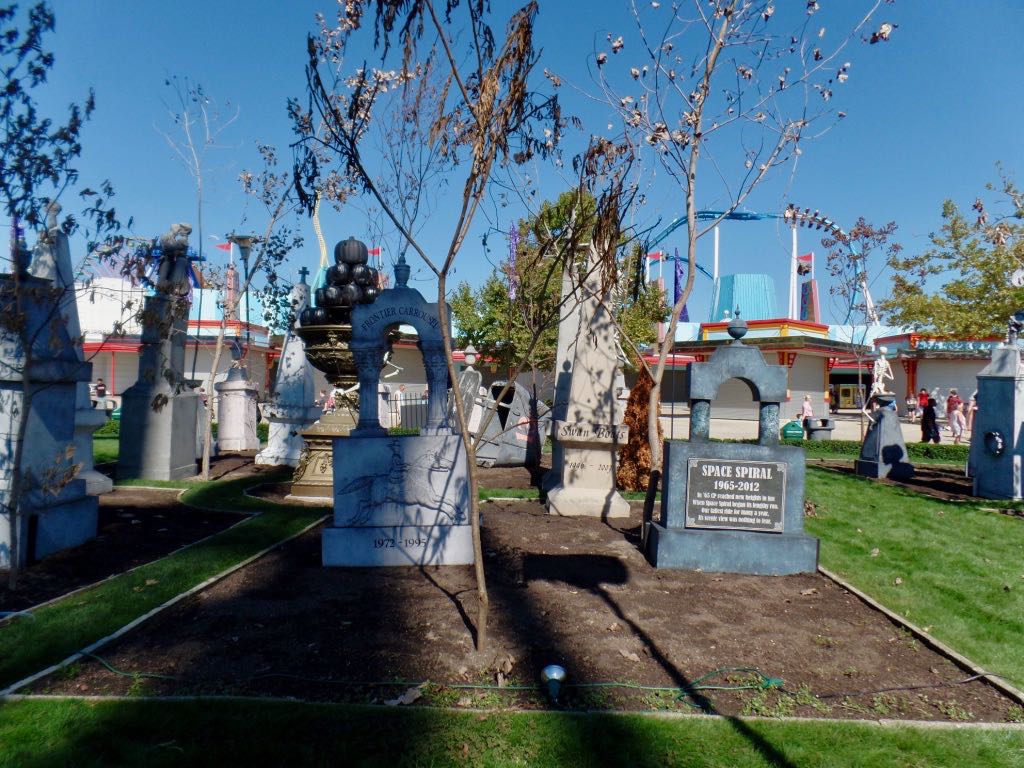 From the Rides Graveyard, set up every Halloweekends to commemorate stuff not at Cedar Point anymore. On the right is one for the Space Spiral, which

bunny_hugger and I only rode once, in an emergency visit to Cedar Point when they announced it was being demolished (as part of building GateKeeper). 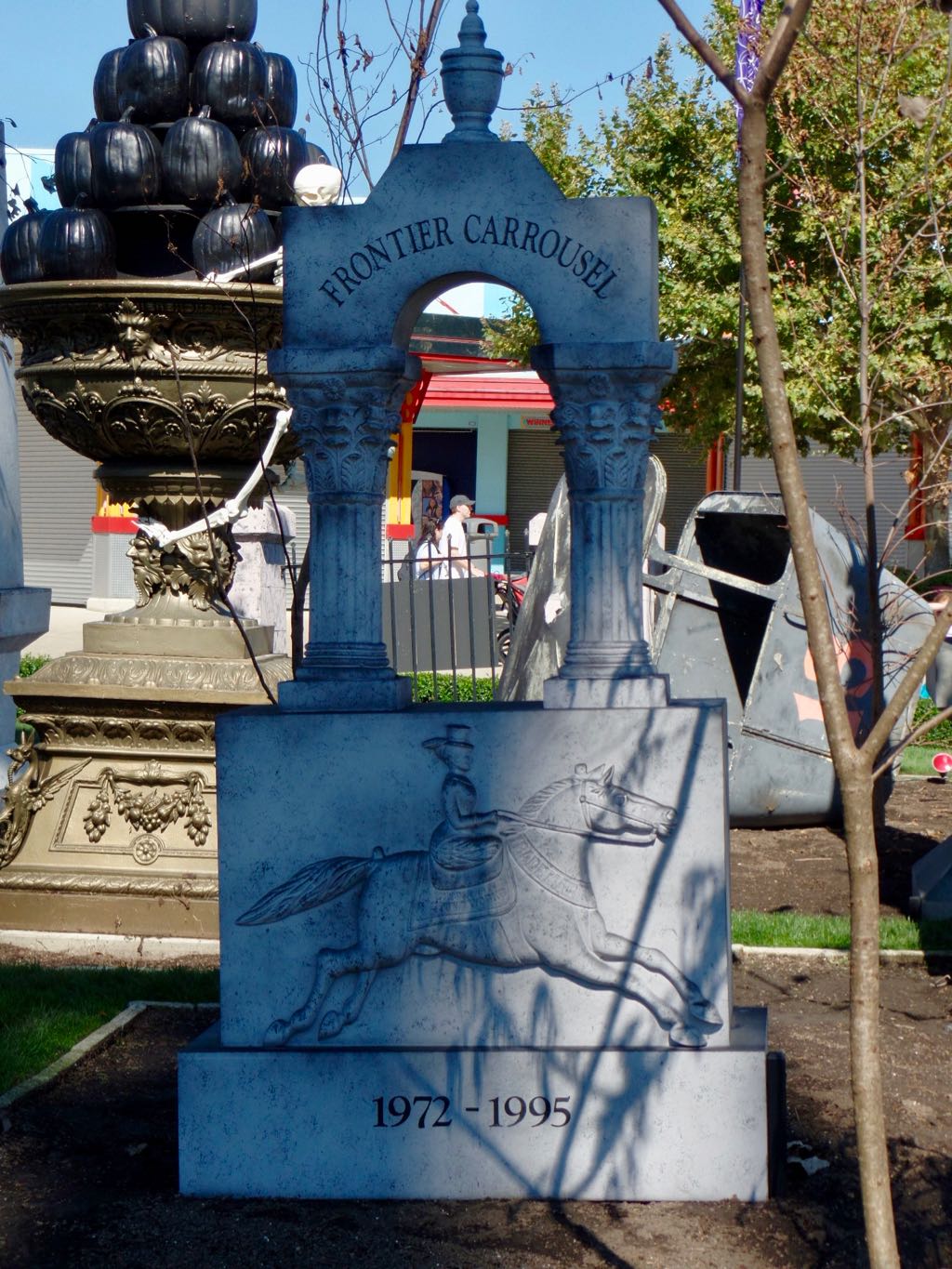 So, the Frontier Carrousel (sic; ``carousel'' is not a word with a unique spelling) is not actually dead. It's just gone to Dorney Park, in Pennsylvania, a replacement for the antique carousel destroyed by fire there. Note the Sky Ride car #13 thats' ``fallen'' on the ground underneath the actual ride, by the way. Demon Drop, similarly, is not dead, just gone to Dorney. 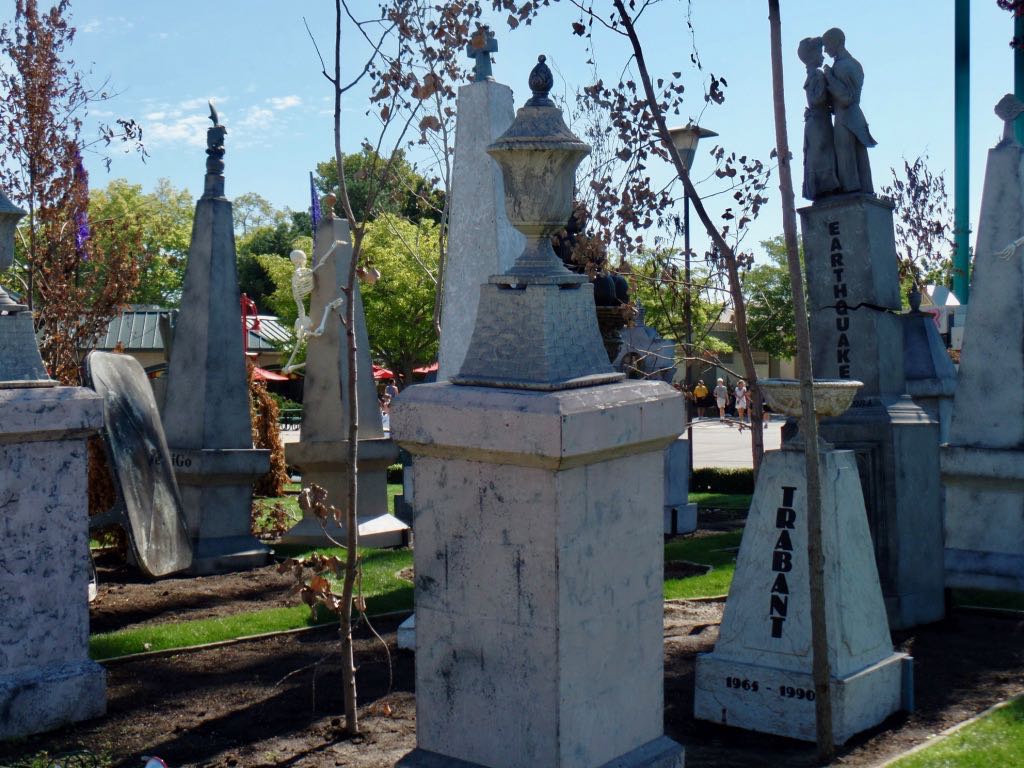 OK, now, Trabant and Earthquake, those are rides that are gone. Earthquake was in the building that's now the sweet shop. (It had formerly been at the short-lived Freedomland USA park in the Bronx.) 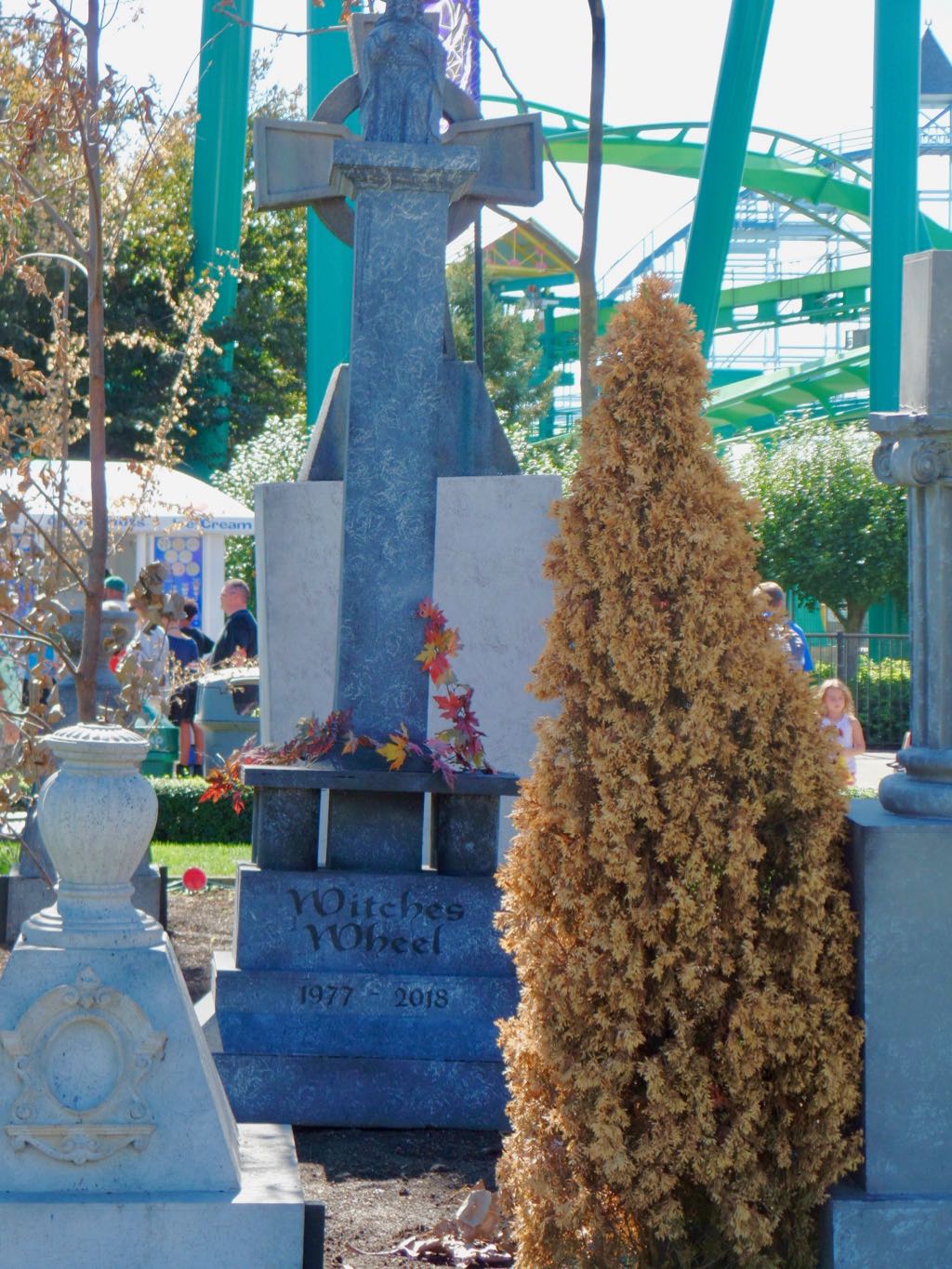 A new-for-2018 gravestone, for the Witches Wheel, which we'd visited in its last weeks just the month before. 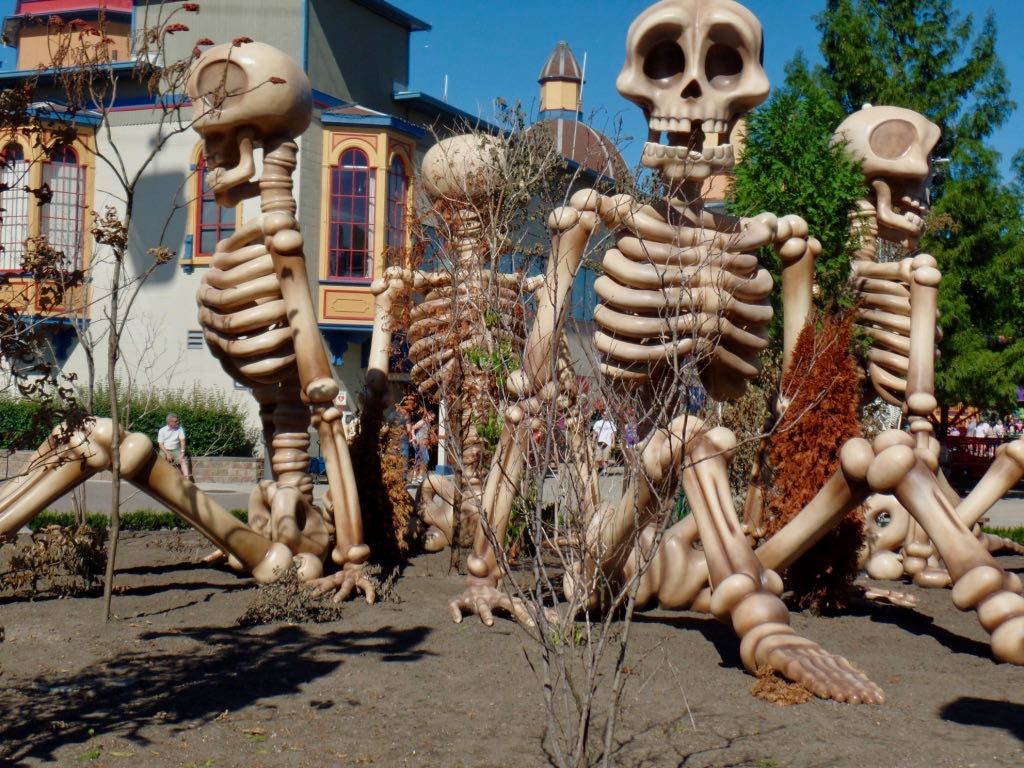 Quartet of skeletons set up outside the Coliseum. 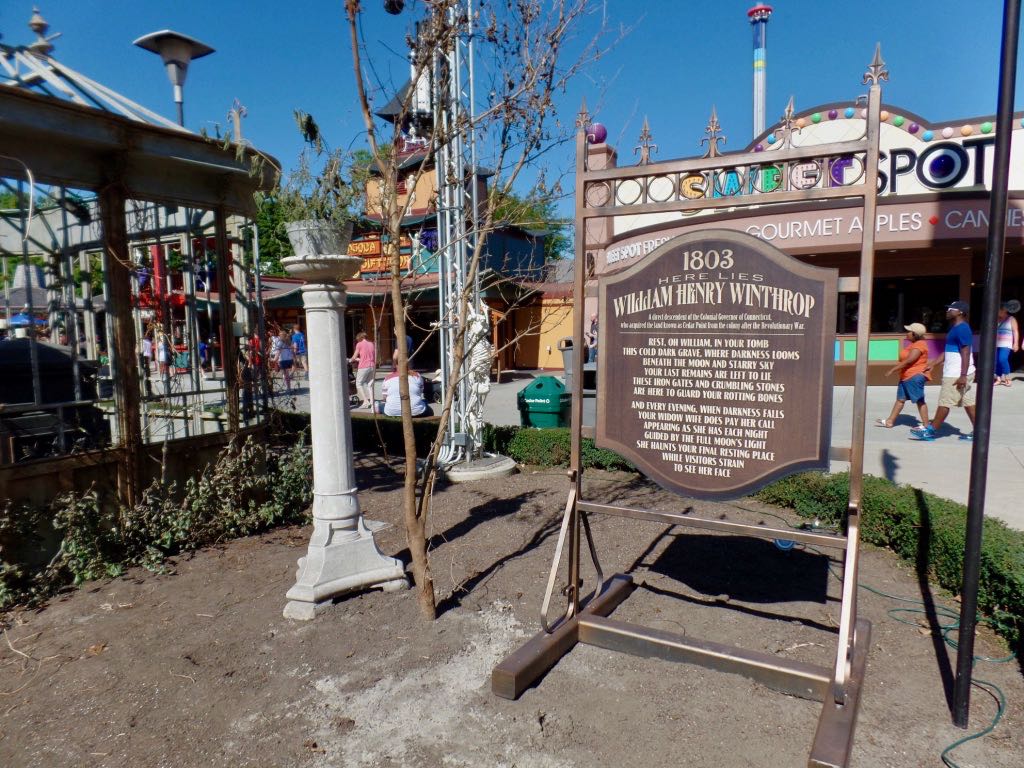 The sign asserts Here lies William Henry Winthrop, credited as a ``direct descendant'' of the colonial governor of Connecticut, and who acquired the land of Cedar Point after the Revolutionary War, you know, from ... somewhere. Is this legit? ... I can't find a mention of Winthrop in histories of Cedar Point that I can find without getting up from my chair. But it does look like a William Winthrop owned land in northwestern Ohio in the early 1800s so ... I guess? It's difficult to credit that he's actually buried there, though. 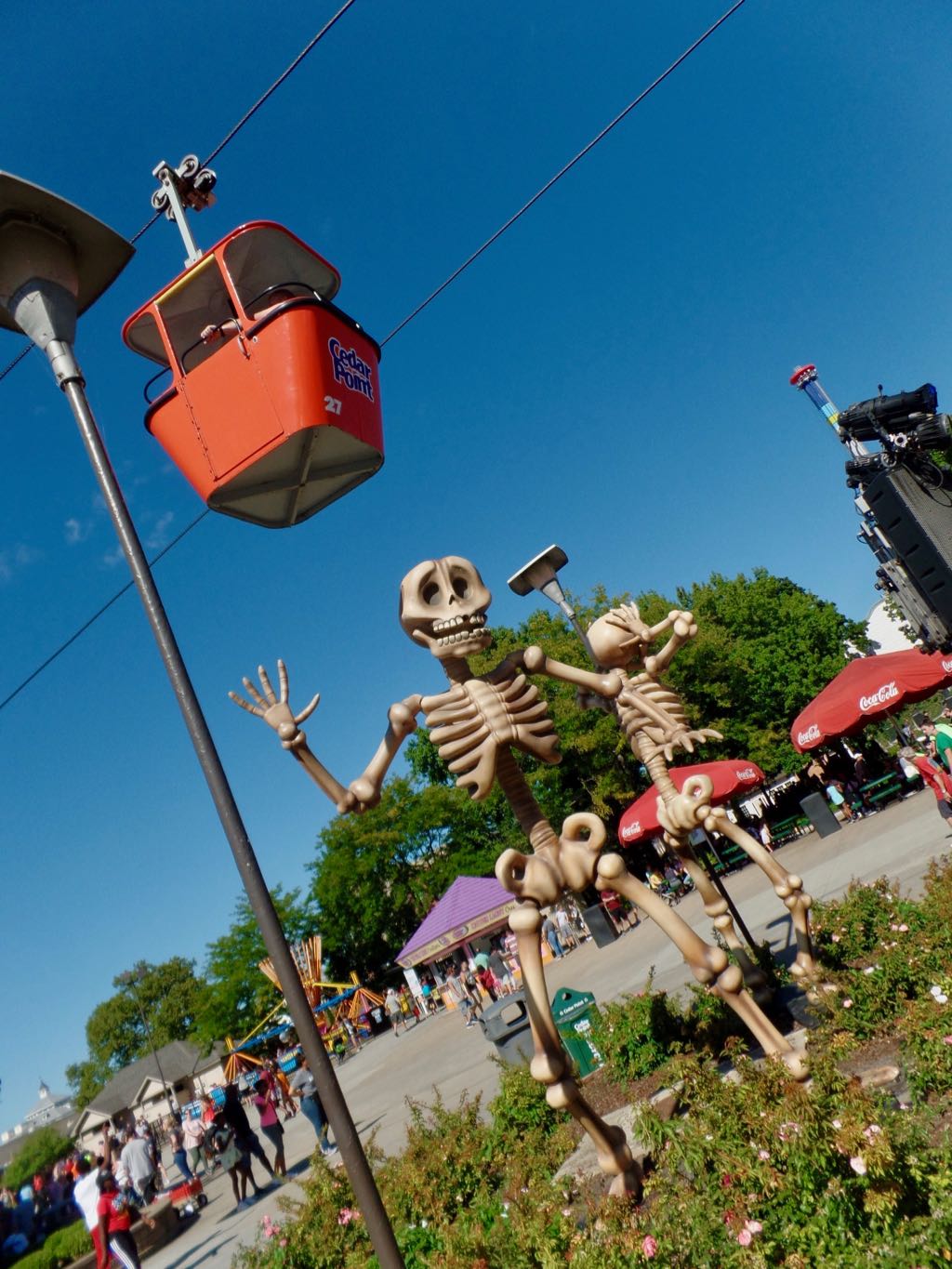 Anyway, more giant skeletons waving to you underneath the sky ride. 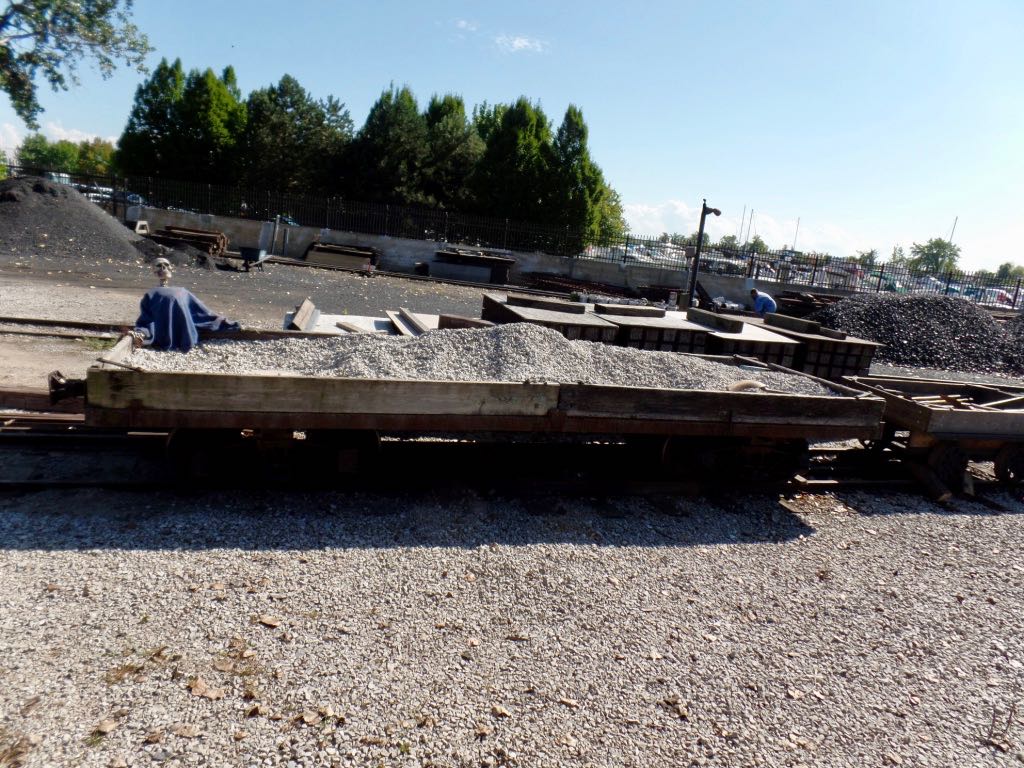 We took the train around to the back of the park. Here's some of the side yard, where the trains get to sit and wait for maintenance and stuff. 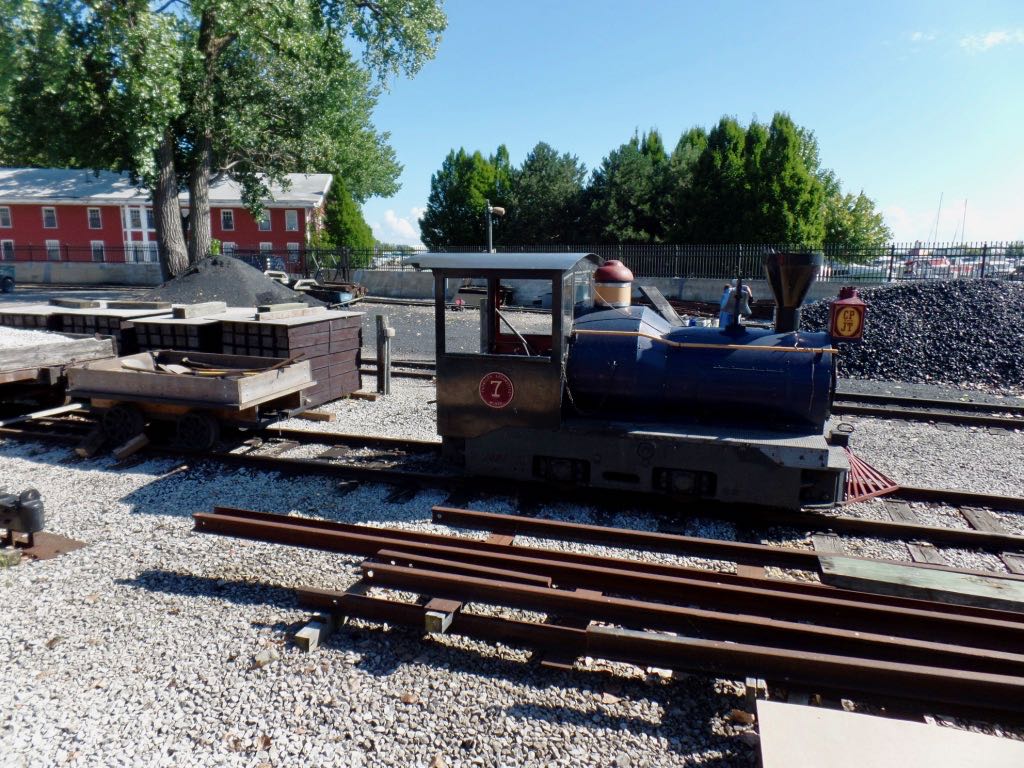 I assume it's a train undergoing a lot of maintenance here. Also note in the background The Cedars, formerly a hotel and for decades some employee housing in, legend has it, terrible condition. They'd be torn down over the coming weekend. 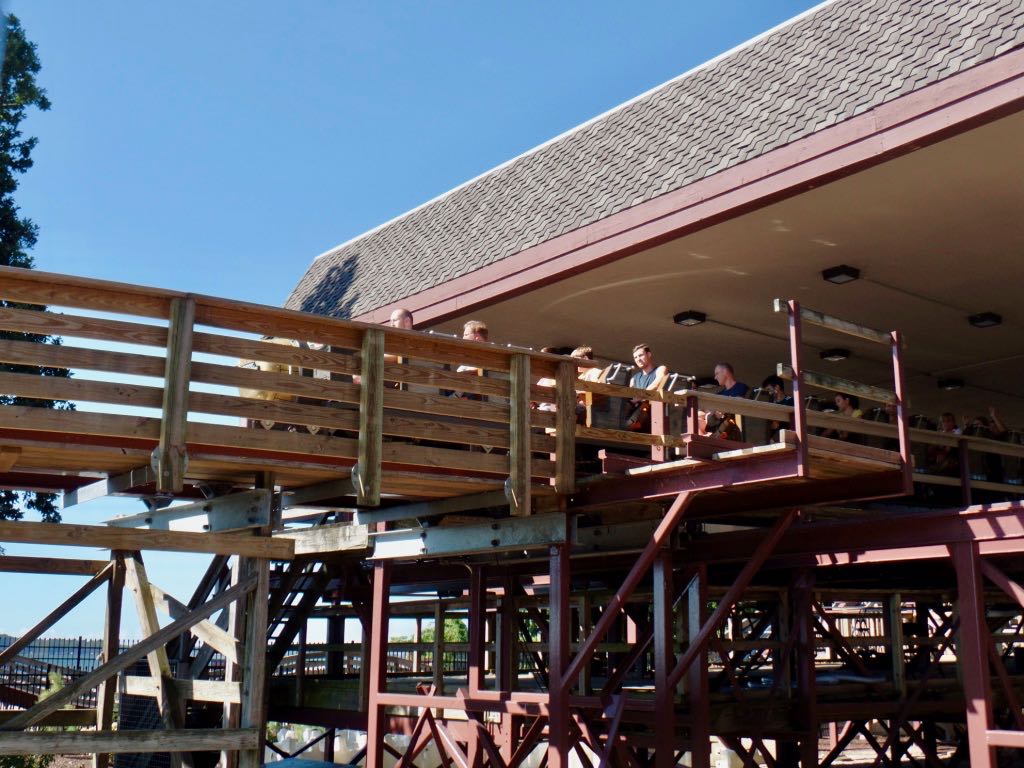 Trivia: The first American woman to fly a plane, Blanche Stuart Scott, became a stunt flyer, with feats including ``death dives'' from 4,000 to 200 feet, and upside-down flights under New York City's East River bridges. Source: Mastering the Sky: A History of Aviation from Ancient Times to the Present, James P Harrison.

PS: I turn out also to need B and C topics for the All 2020 A-to-Z so this is a good week to suggest things to me!