In other circumstances this would have been the big day for AnthrOhio: the fursuit parade, and the frustrations of trying to get a group photo where

bunny_hugger is visible. The cake-decorating contest and, I'm sure, our irritation that we once again forgot to bring the frosting tips that would make detail work at all plausible. Losing out to someone who had used the cake as a foundation to build a castle out of granola bars and everything else they could find in hospitality. Surely the dance. Part of it with

bunny_hugger in full fursuit. Going back to karaoke for a stretch and then returning, I'm assuming, in Angel and Stitch kigurumi so that I could sway awkwardly around while rave music plays. Renewal of our joke about how their using Toto's Africa to clear the room won't work on us.

Well, our little extra trip to Cedar Point Halloweekend 2018. We wandered into the Town Hall Museum and found ourselves barely able to escape. Here's some of what we looked at for a good long while. 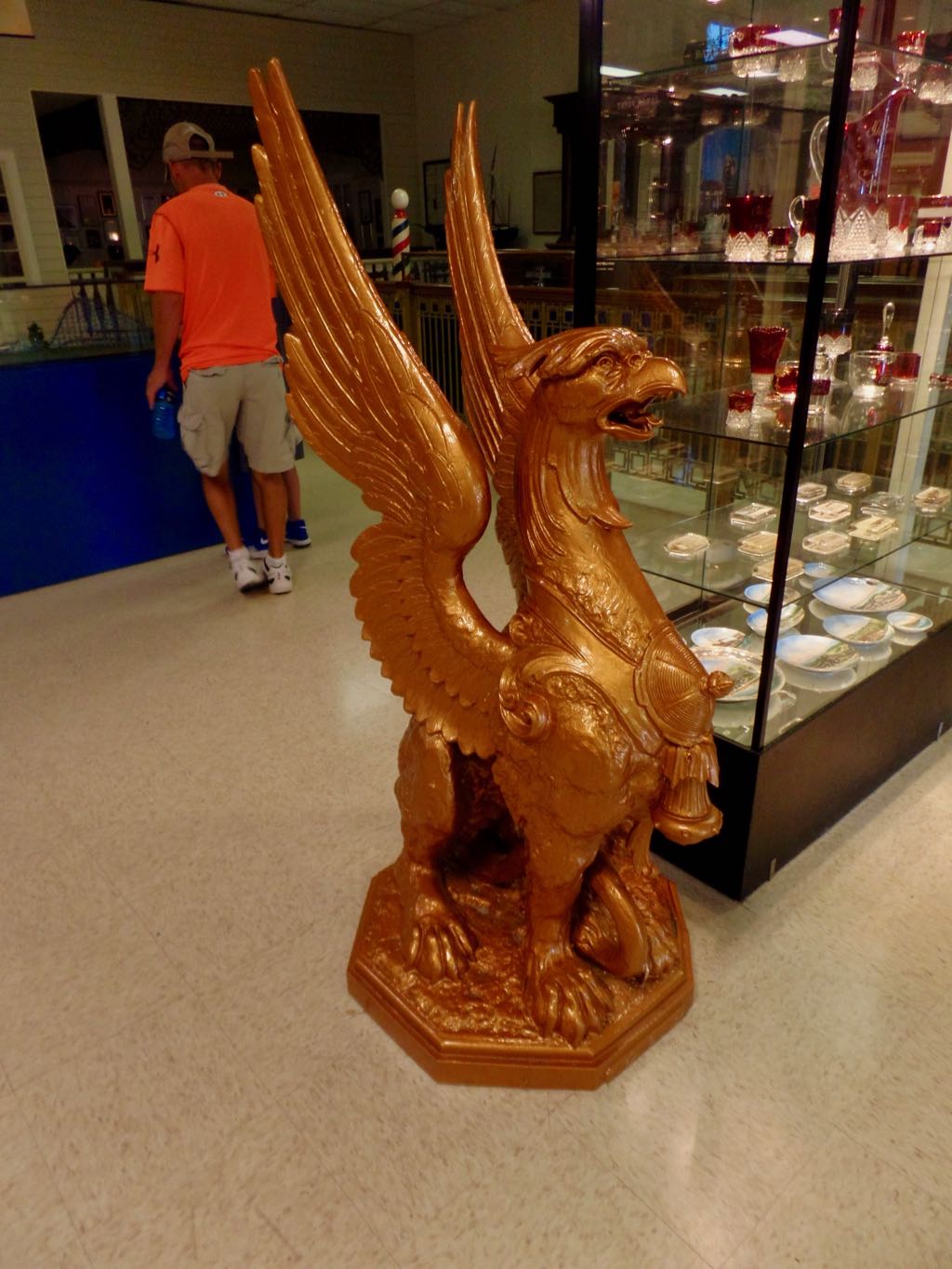 Reunited with a friend! This early-20th-century gryphon statue used to be posed outside Iron Dragon, because ... whatever reason. It vanished when GateKeeper started construction. Since GateKeeper's logo and theme is a golden gryphon, this statue and the rumors that it had been painted gold made it clear what would happen. And when GateKeeper did open ... the statue wasn't there. 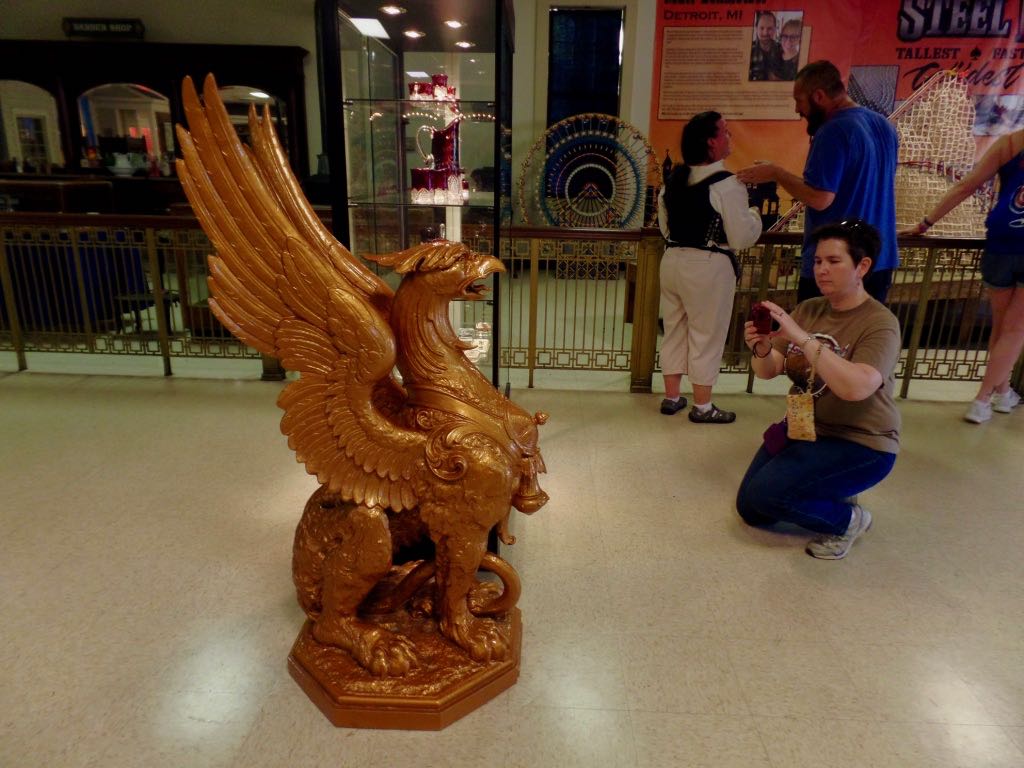 bunny_hugger getting a picture of the gryphon. We have never heard just why the gold-painted gryphon didn't attach to GateKeeper but the occasional rumored appearance of it in storage was a comfort, that the antique bronze statue wasn't lost. 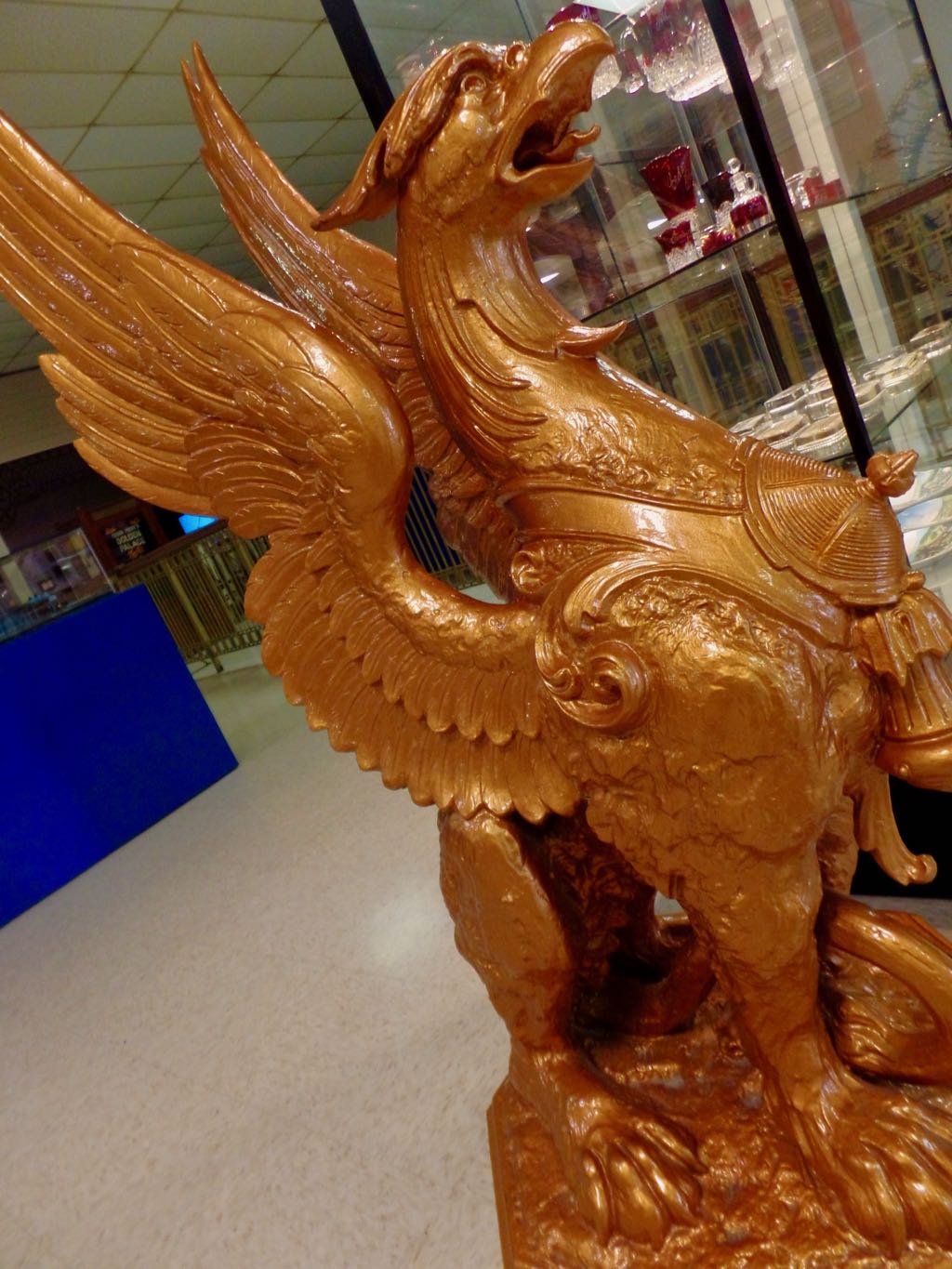 The wings are different from the depictions on GateKeeper, and I'm not sure that the head on the roller coaster is a match for this statue, but I also can't imagine anybody noticing or caring if they just put this fellow up there. 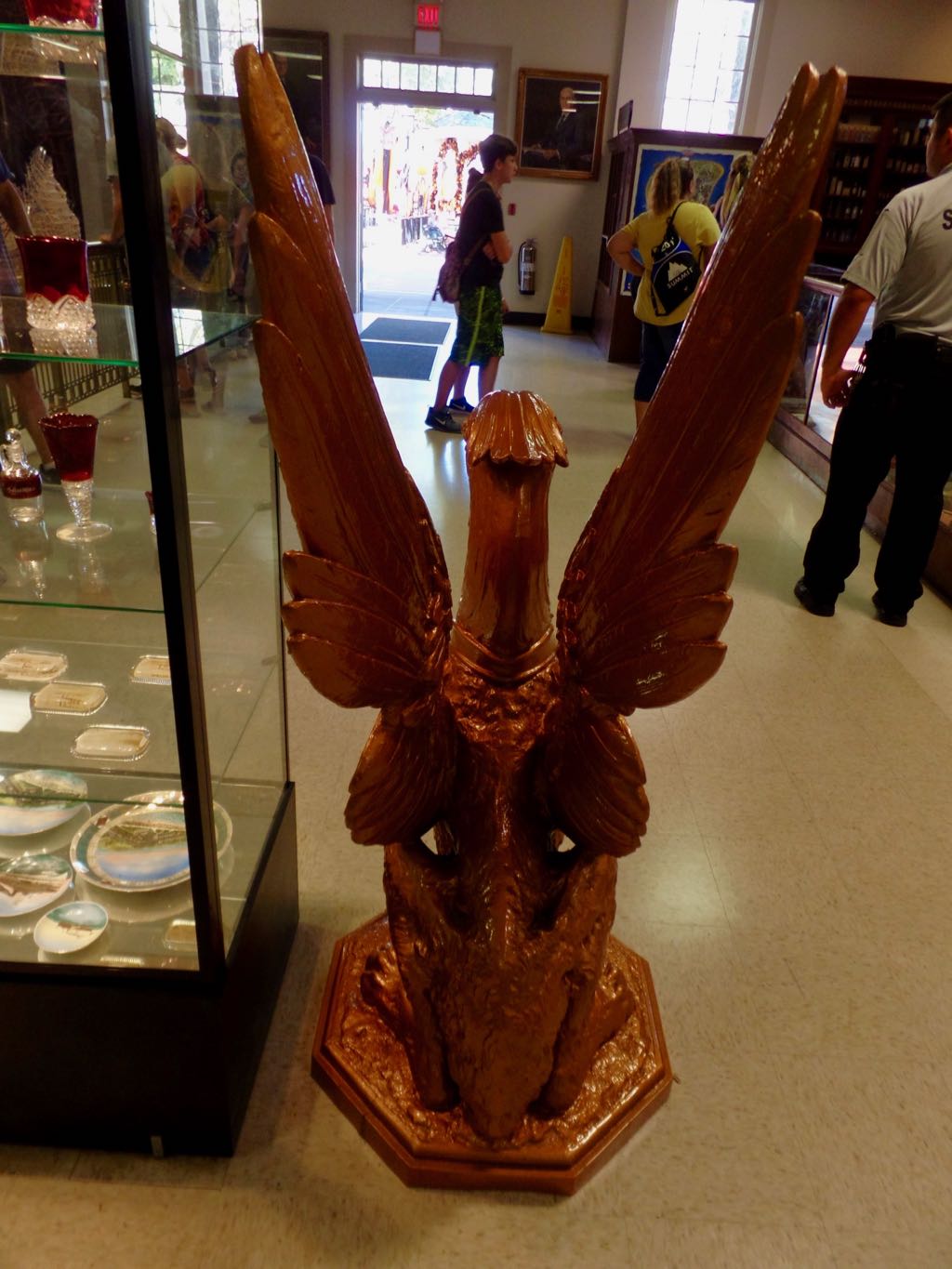 The gryphon from behind. That's some nice hind foot positioning there. Less tail than you'd expect, though. 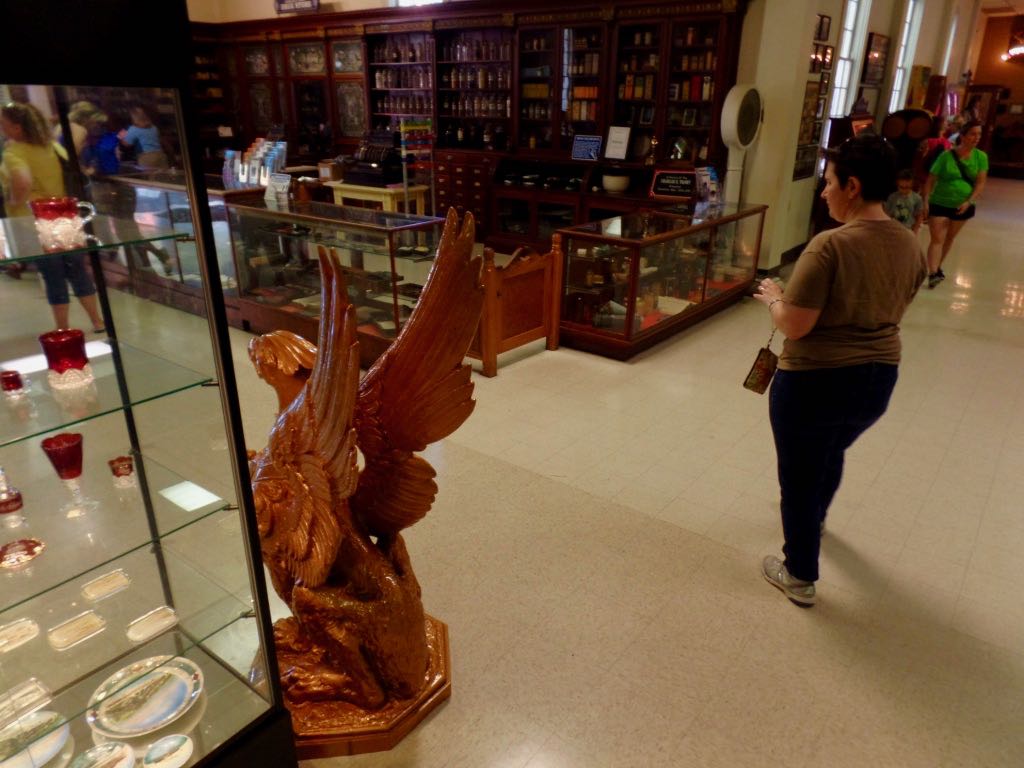 Anyway there's the gryphon from behind. And, incidentally, a picture of the old pharmacist's that Cedar Point bought around a half-century ago and put on display in the Town Hall Museum because they were going through one of those phases were they were trying to be educational and cultural. The park, alas, sold that stuff off over the last year on the grounds they wanted to focus on stuff more tightly focused on Cedar Point history. Neglecting that, like, this stuff was there for a third of the park's whole history. 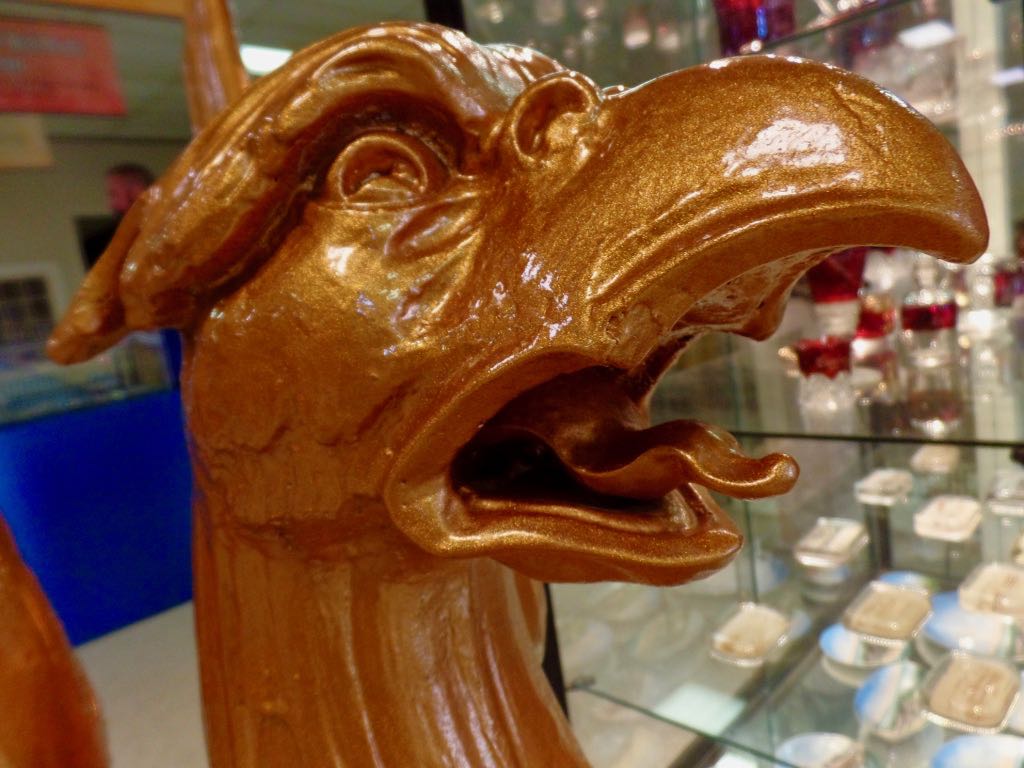 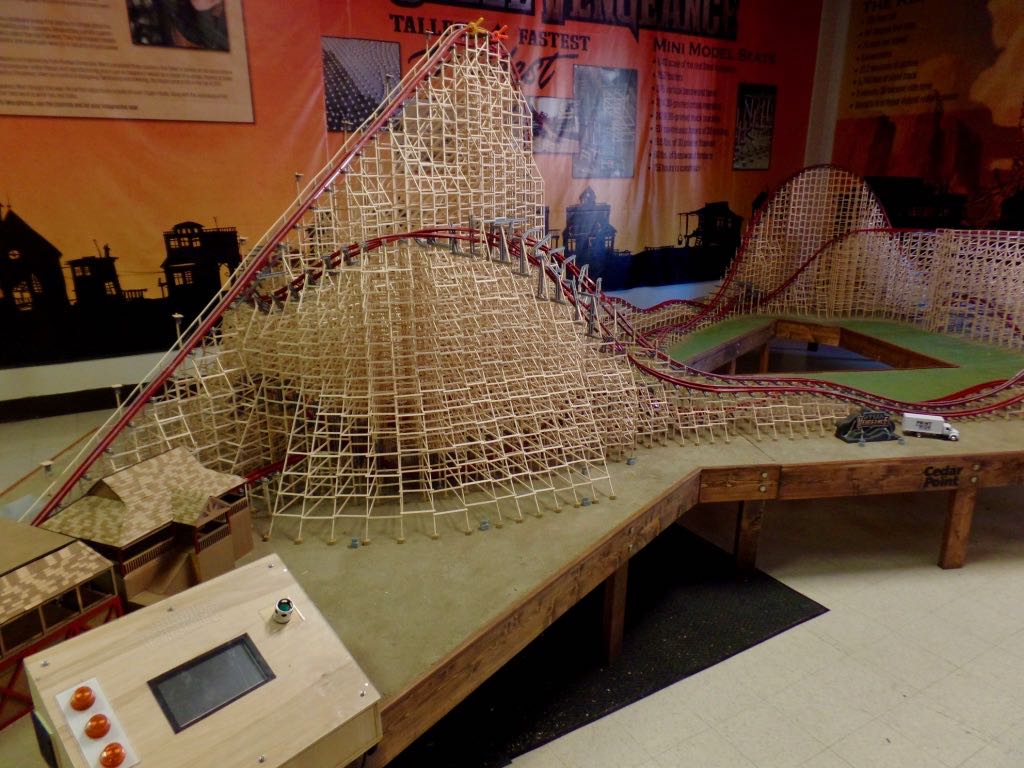 The museum cleared some space out to put in an amazing scale model of Steel Vengeance, which even has a control panel to suggest that you could make it work? We never saw that operating, though. 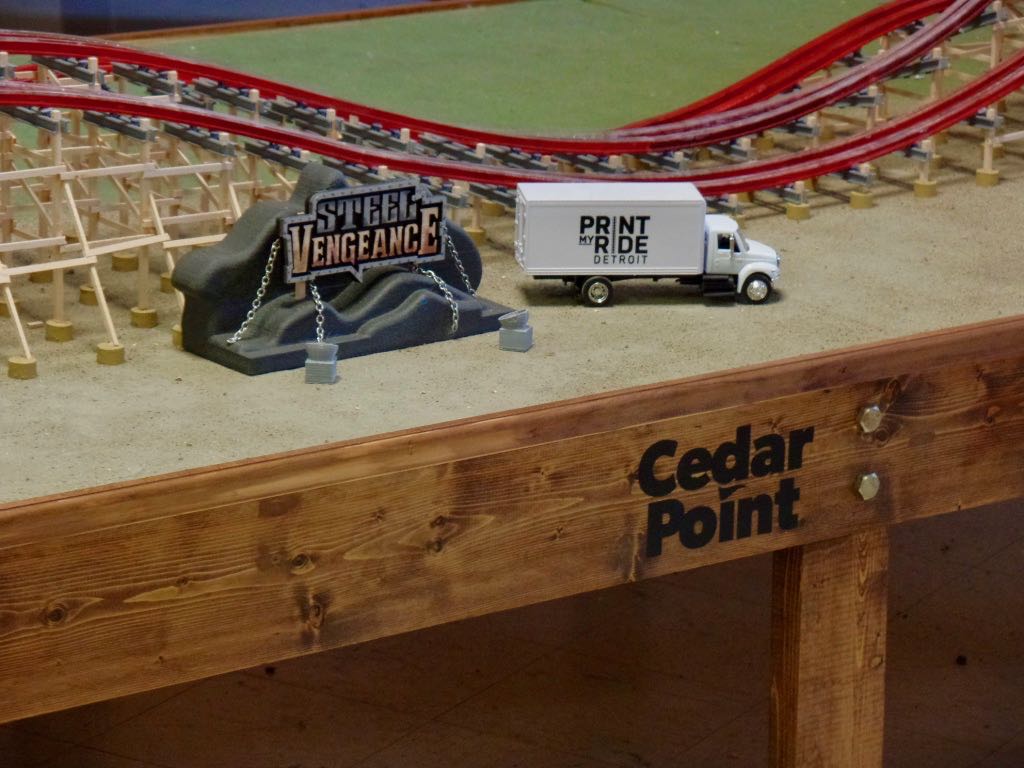 Miniature ride sign and a truck that, I guess, lets us know that Print My Ride will build a miniature roller coaster if you happen to be an amusement park in need of a scale model. 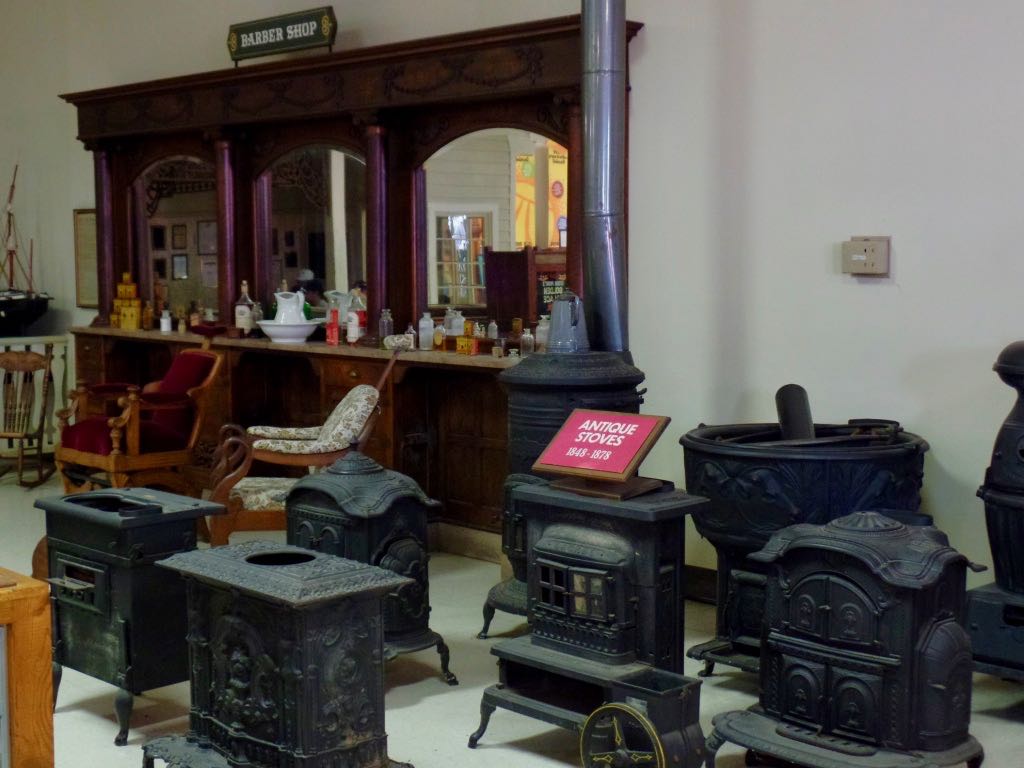 It's fairly easy to understand why they might have the contents of an old-time barber shop. Why they had quite so many antique stoves is a mystery. I must admit that as a museum, the Town Hall Museum failed, given that it didn't even attempt to explain what anything was or why it was there. But the stuff.

Oh, and here's a statue that used to be at the Marina Entrance, before that was renovate to put in ValRavn. It's another antique bronze statue, that I think may have been at the 1904 World's Fair, source of no end of fascinating cultural referents. It's Mercury, of course, drawing his sword after having lulled ... something ... to sleep with his music. You know, family fun! s 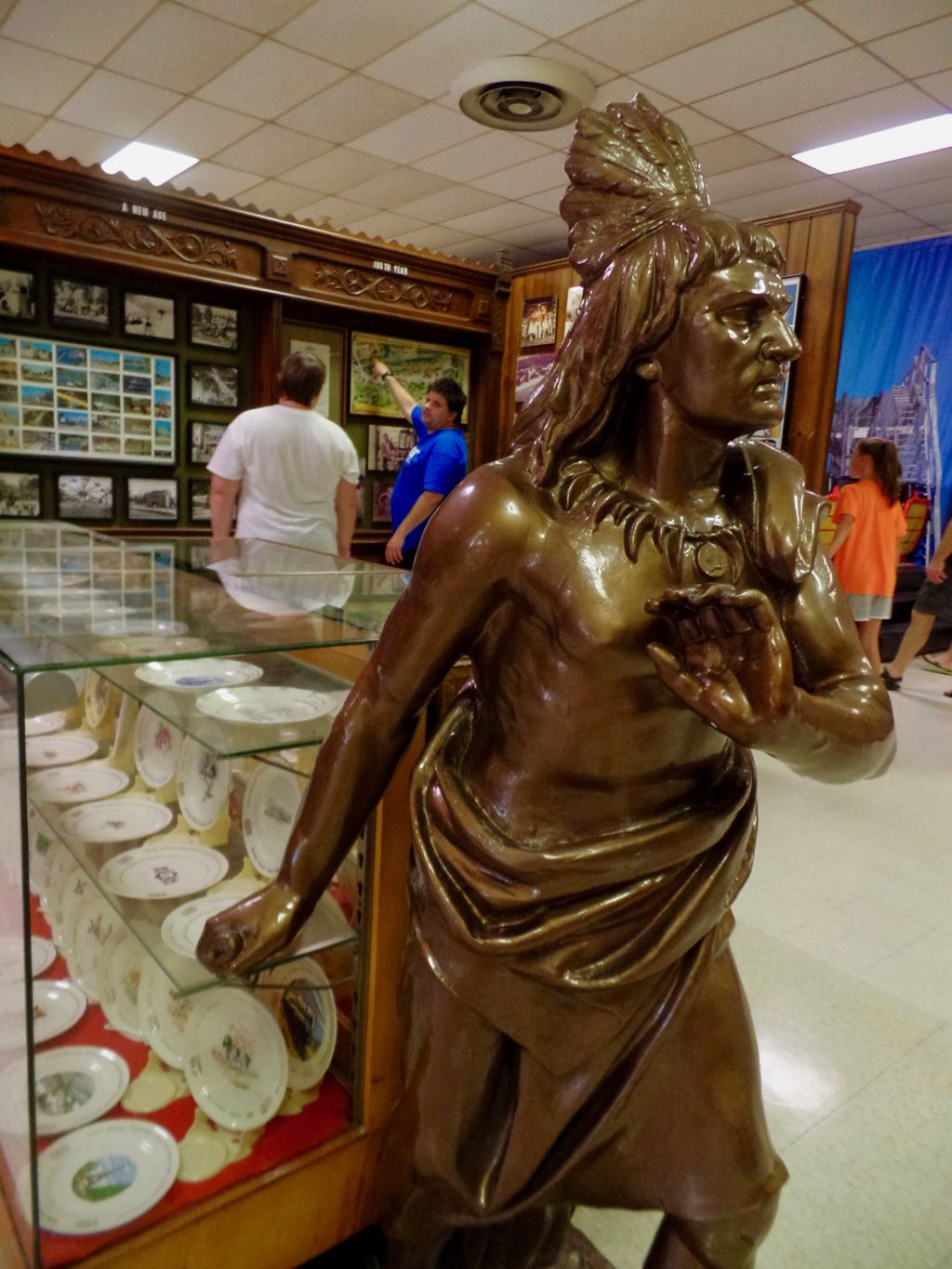 I don't remember the Native American statue. I've got no hypotheses why he's painted gold while Mercury remains unadorned. 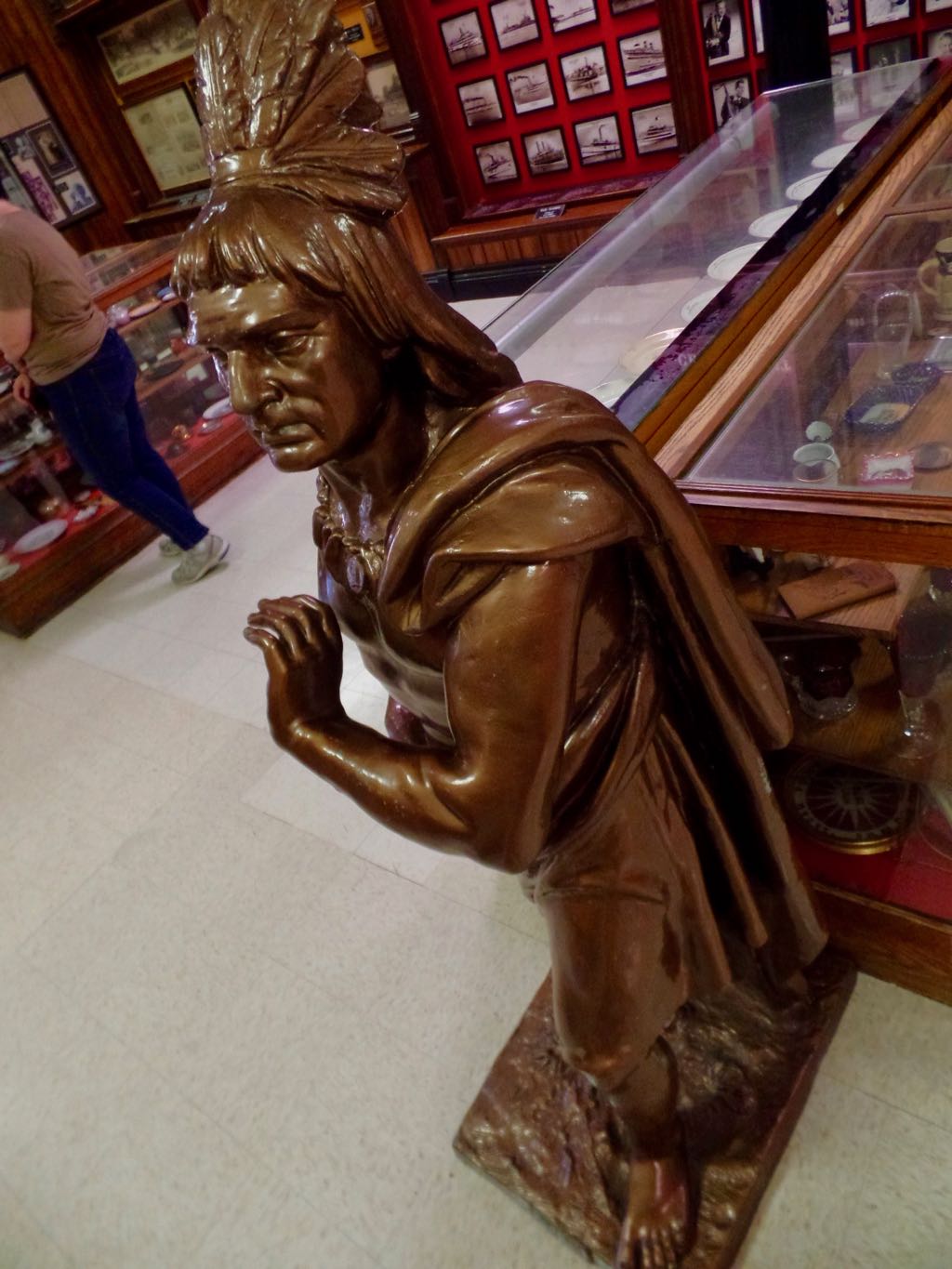 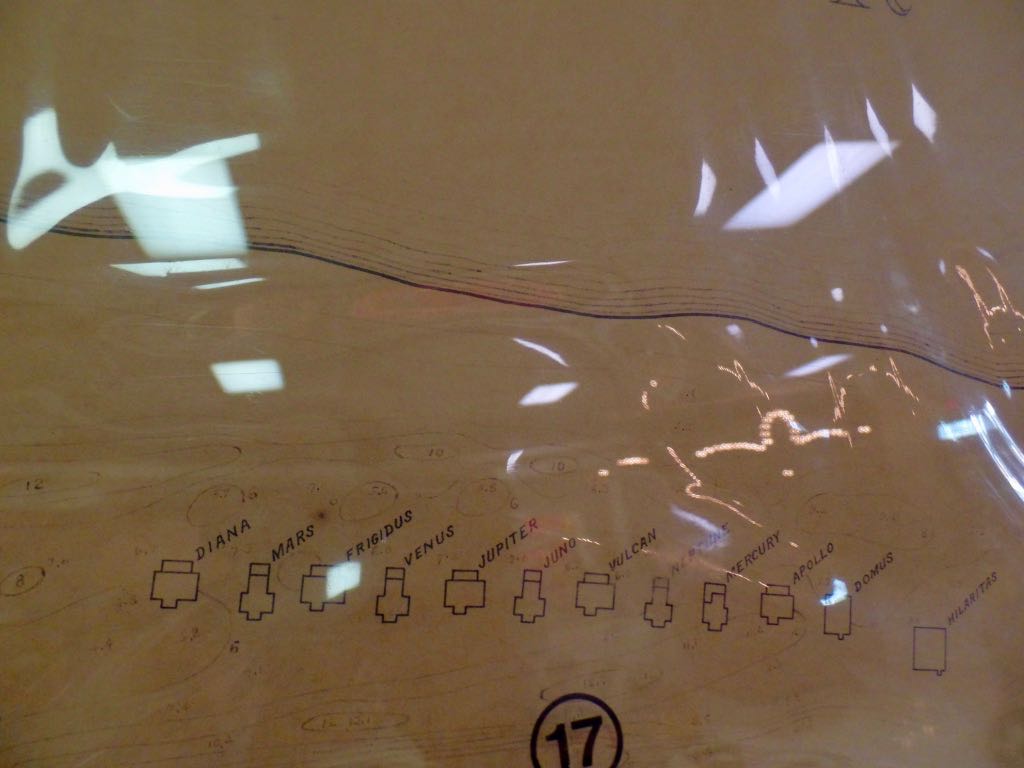 Detail from a turn-of-the-century map of Cedar Point, particularly showing the beach cabins of the time. There is just enough of a pattern here with the names that Frigidus and Domus and Hilaritas stand out. 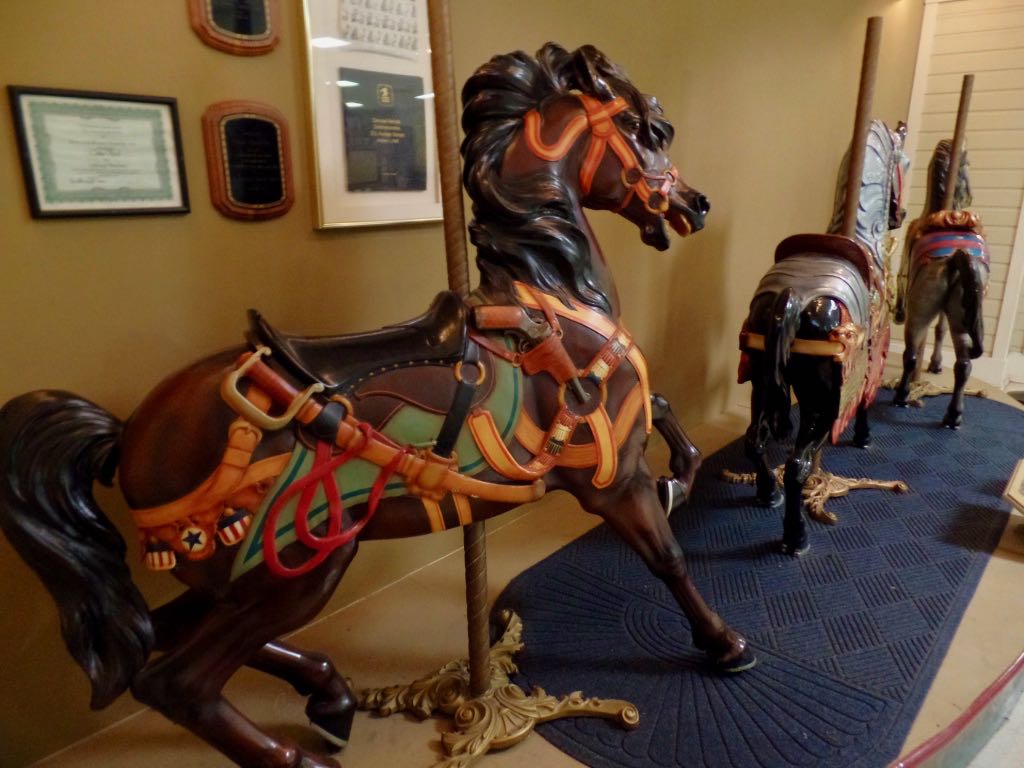 When Cedar Point sent the Frontier Carrousel to Dorney Park they kept three of the horses (and sent replicas out to Pennsylvania). The original horses are on display at the museum here. 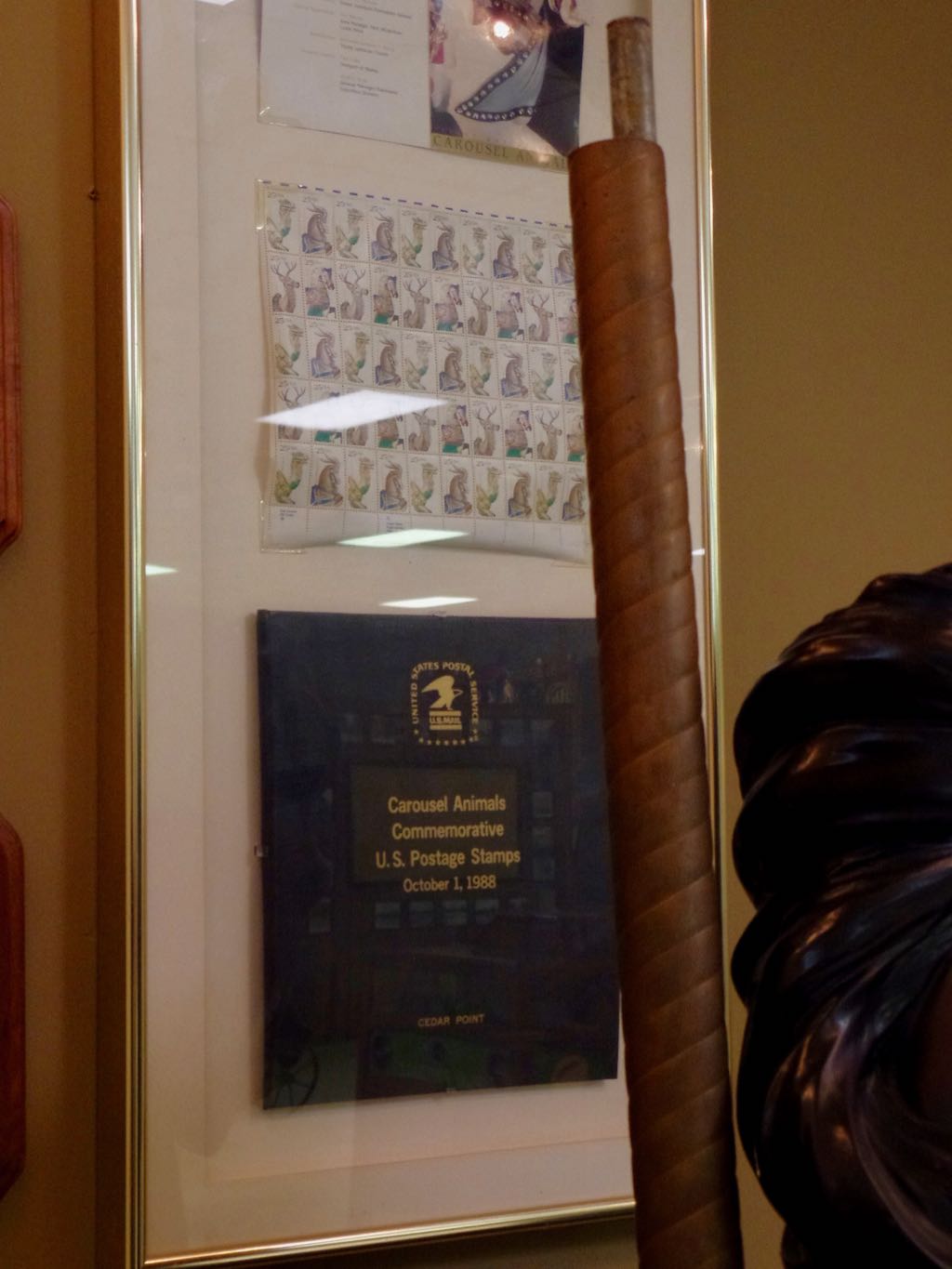 The Post Office famously had the 1988 Carousel Animals series of commemorative stamps. The dedication ceremony was held at Cedar Point, and you can see a program for the event here, along with a sheet of stamps. 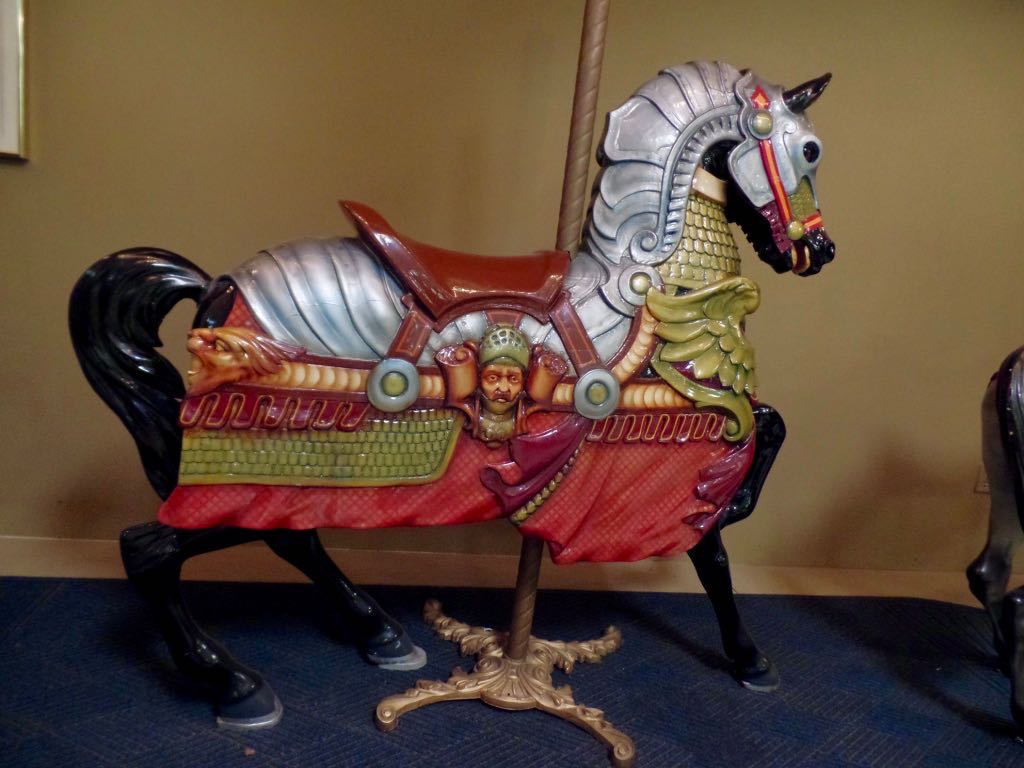 The lead horse from the Frontier Carrousel, which somewhere picked up a legend of being haunted. Photographs of it just don't come out, as you can see in this photograph. .. .Haunting isn't what it used to be. 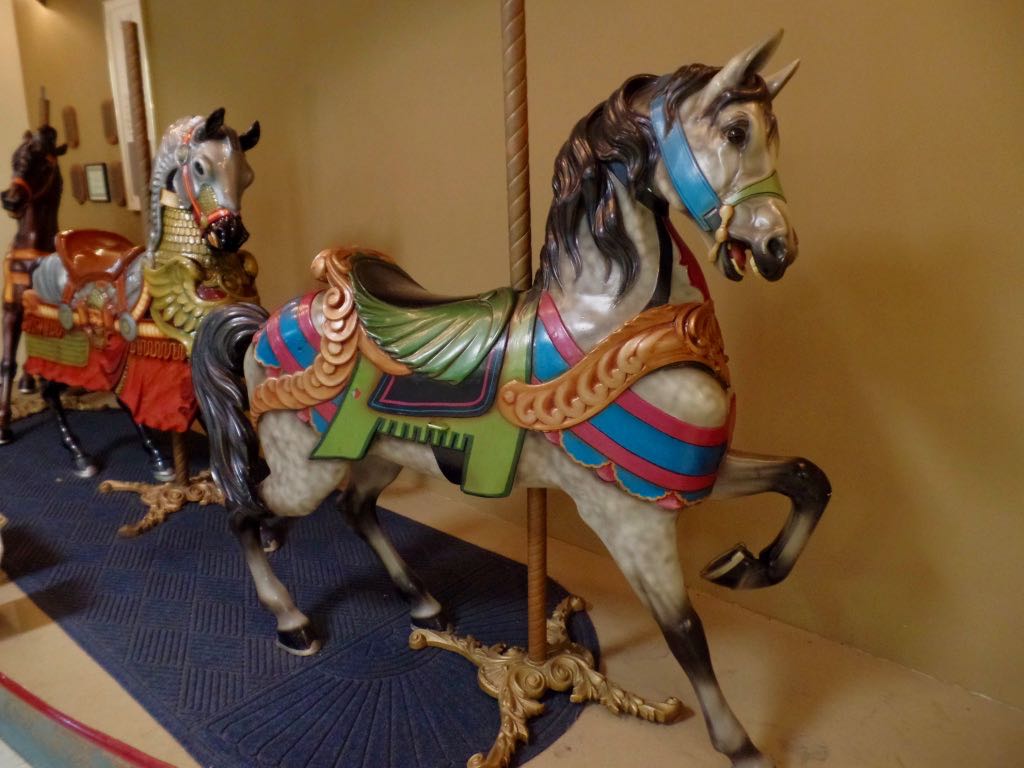 Last of the horses kept from the Frontier Carrousel. Oh, yeah, the Frontier Carrousel came to Cedar Point only in 1971. Before that, it was the carousel of Lake Lansing Park, a small amusement park just outside our town. It had been at Lake Lansing Park from 1942 to 1971. So we still have four more years of our little defunct trolley park being the longest-duration home of his ride.

Trivia: TerryToons's Kiko Kangaroo, who first appeared in July 1936, was merchandised in plush and inflatable toy versions, before the characer was dropped in late 1937. Source: TerryToons: The Story of Paul Terry and his Classic Cartoon Factory, W Gerald Hamonic.

Currently Reading: Beyond Earth: A Chronicle of Deep Space Exploration, 1958 - 2016, Asif A Sidiqi. OK so the film that the Soviets used for Luna III, which took the first photographs of the far side of the Moon? Apparently that was film stock recovered from a crashed CIA spy balloon. This isn't really your classic-style intelligence agency self-own (I mean, spy balloons are a pretty good solution to the problem even if they can't be kept from crashing) but it's still solidly funny.