Who's gonna drive you home tonight

bunny_hugger for some of it. That we'd feel we barely had time to see anything before the closing ceremonies were going. And then that the convention evaporated in the evening, before we even blinked. I bet we'd have thought once again about finding a pinball bar and then decided the only ones we could find were too far away to be worth travelling to, given how tired we were after getting up so early for the species SIGs. Maybe they'd have had karaoke going until late enough in the night, in one of those little small side rooms. I'd have probably sung something, and been trying to work up the courage to sing something else, before it all drifted off.

On to the mathematics blog. How did I keep it full this past week?

My cartoon watching? 60s Popeye: Sure, I heard of a Sheepish Sheep-Herder is the amiable Filmation-grade cartoon of the week.

Back, now, to Cedar Point in September 2018 and our extra trip to Halloweekends stuff. 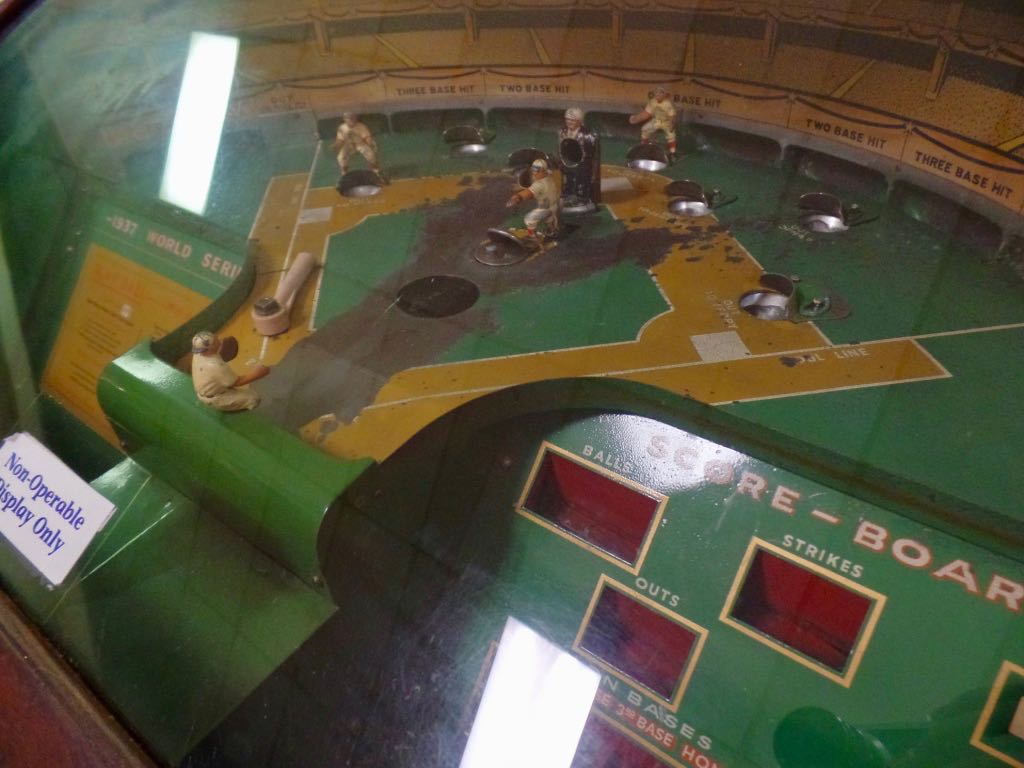 Something caught my eye about this coin-op baseball game. There are ones like it in any pinball museum too; the ball shoots out from the pitcher's mound, and you get one swing at it. What hole it falls in determines what you get. 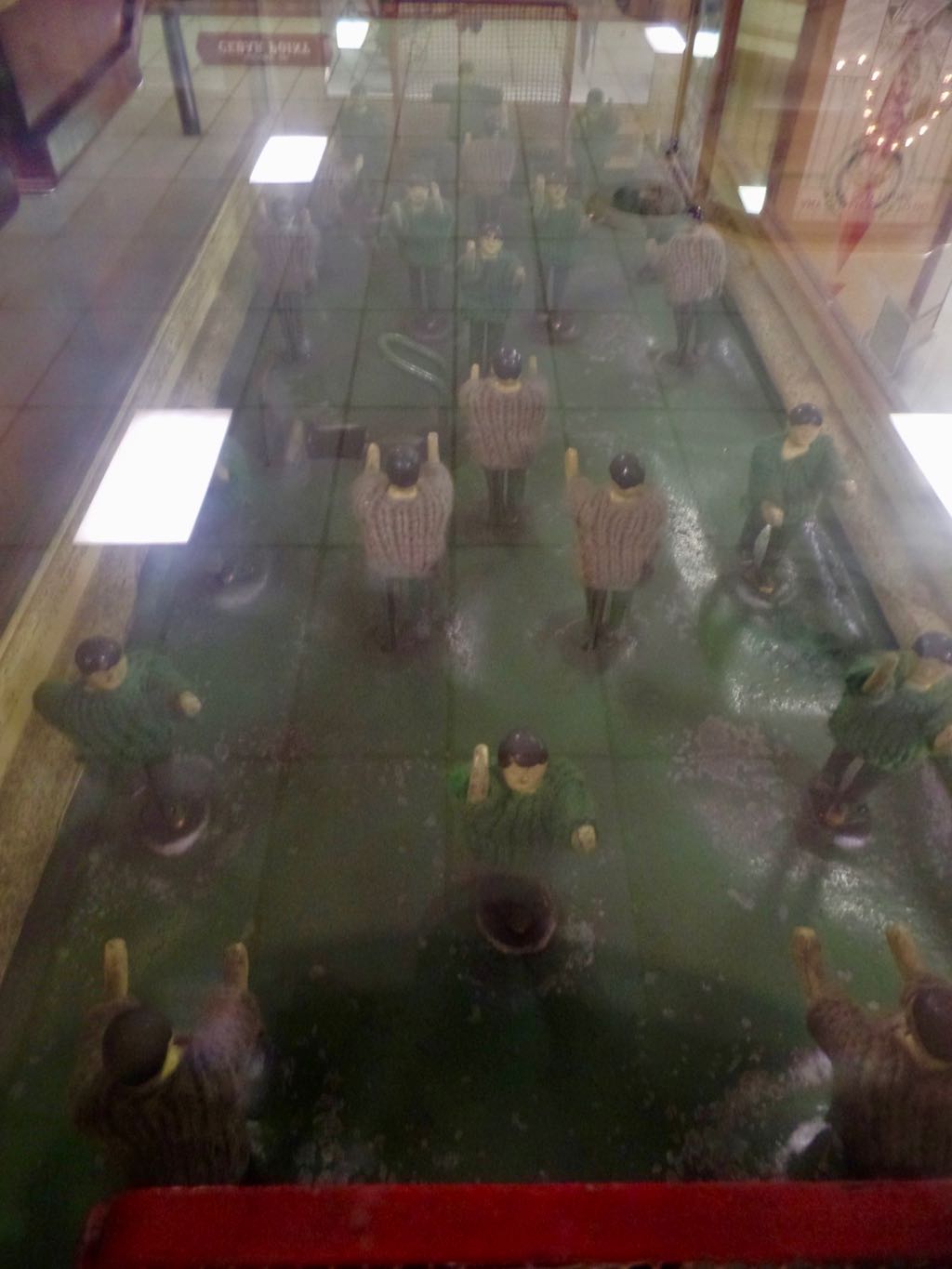 Briefly taking my interest was this coin-op soccer, I think it was, game, which isn't fooseball but you can see fooseball from it. 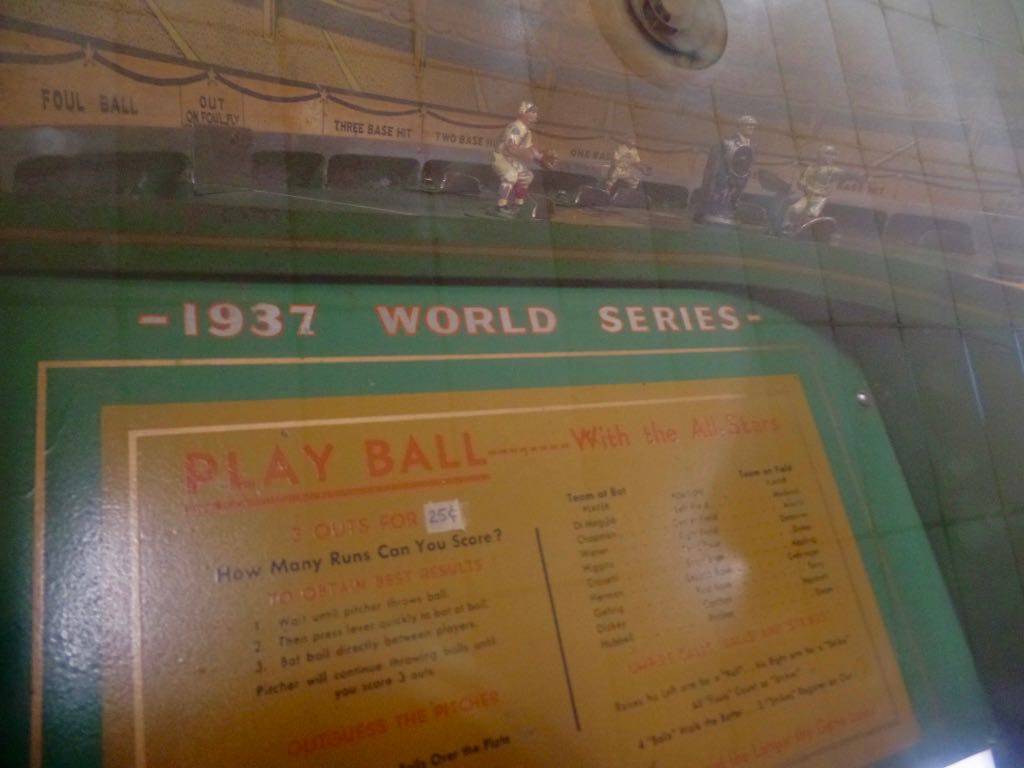 Back to the baseball game, though. It's themed to the 1937 World Series, you can see. 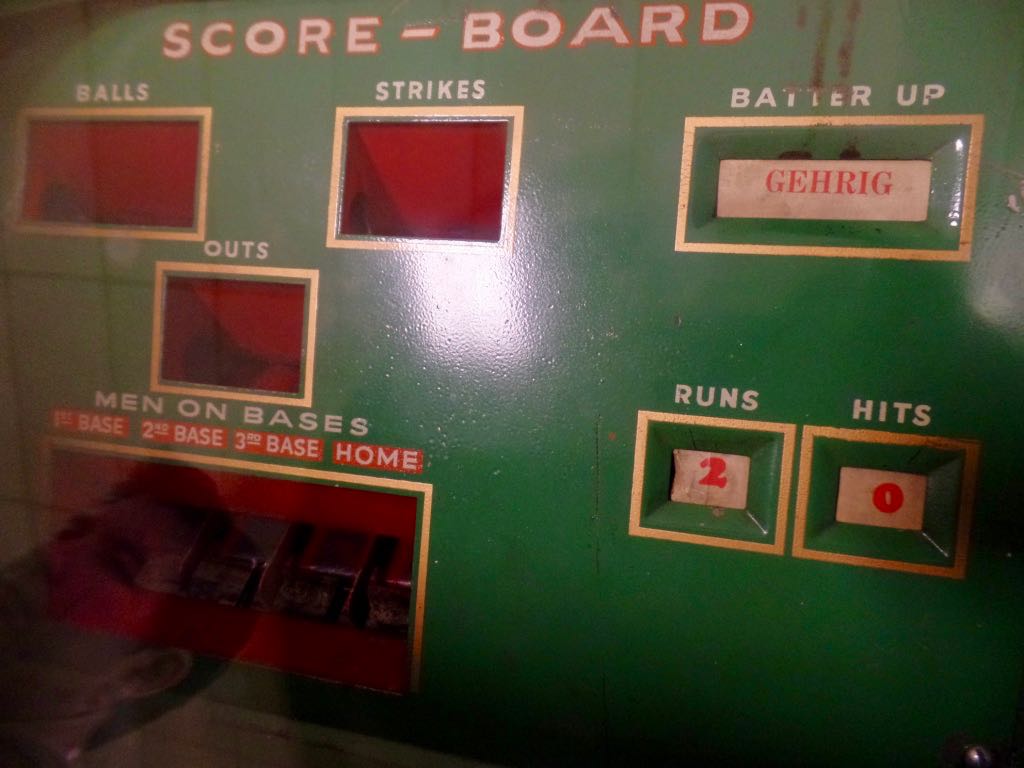 When did the - disappear from the word Score-Board? (World War II, surely, when words lost their - generally.) Anyway, yes, the Yankees were in the 1937 World Series so Gehrig could indeed have been up. 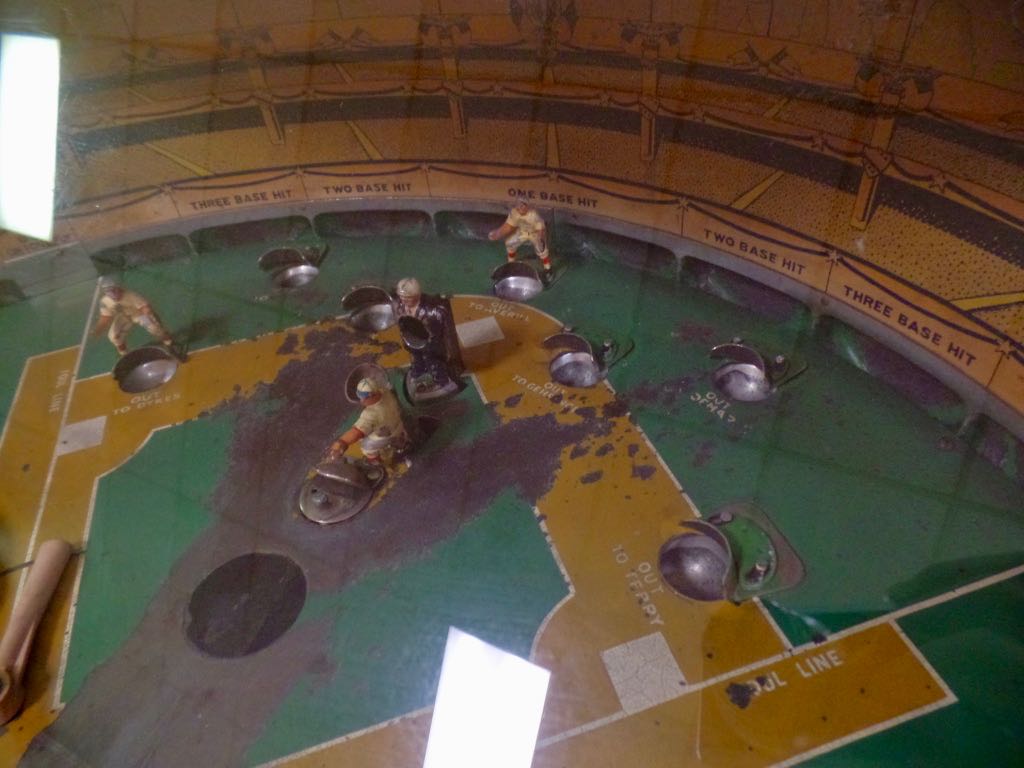 Here's the playfield. You'd think it's such a long shot to hit the ball to one of the fielders who put it out, but the streak of worn paint leading to the outfielders and shortstop say it's not. 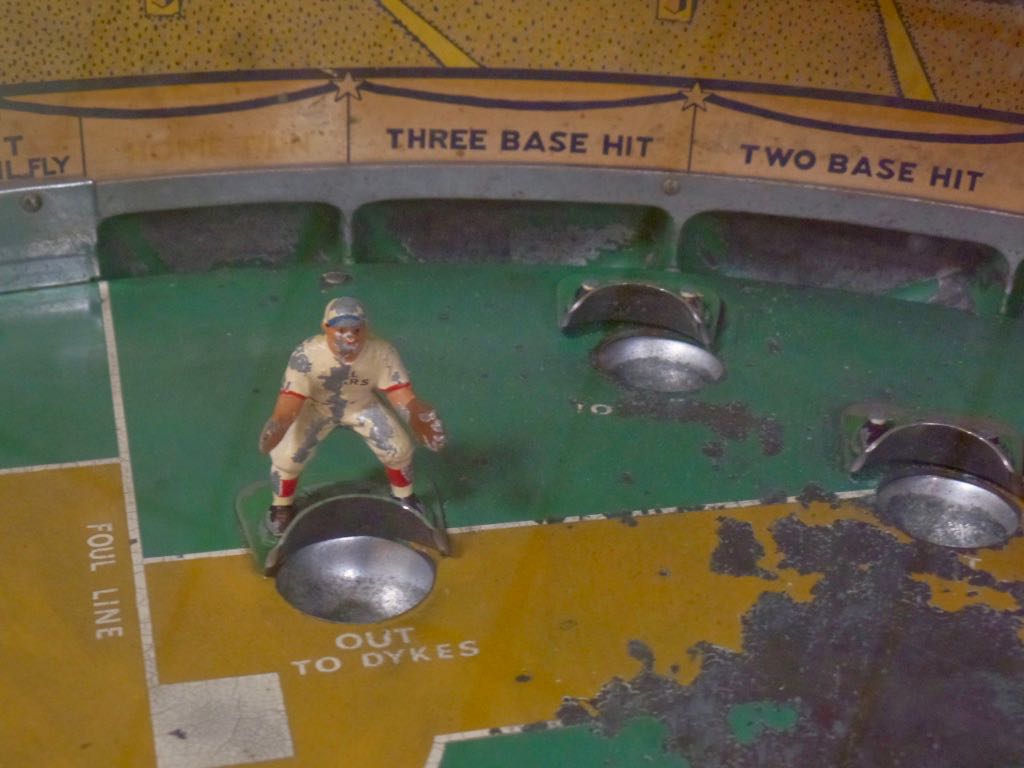 Left field, and your chances for a multiple-base hit. The positioning here makes it more obvious why outs are so common. 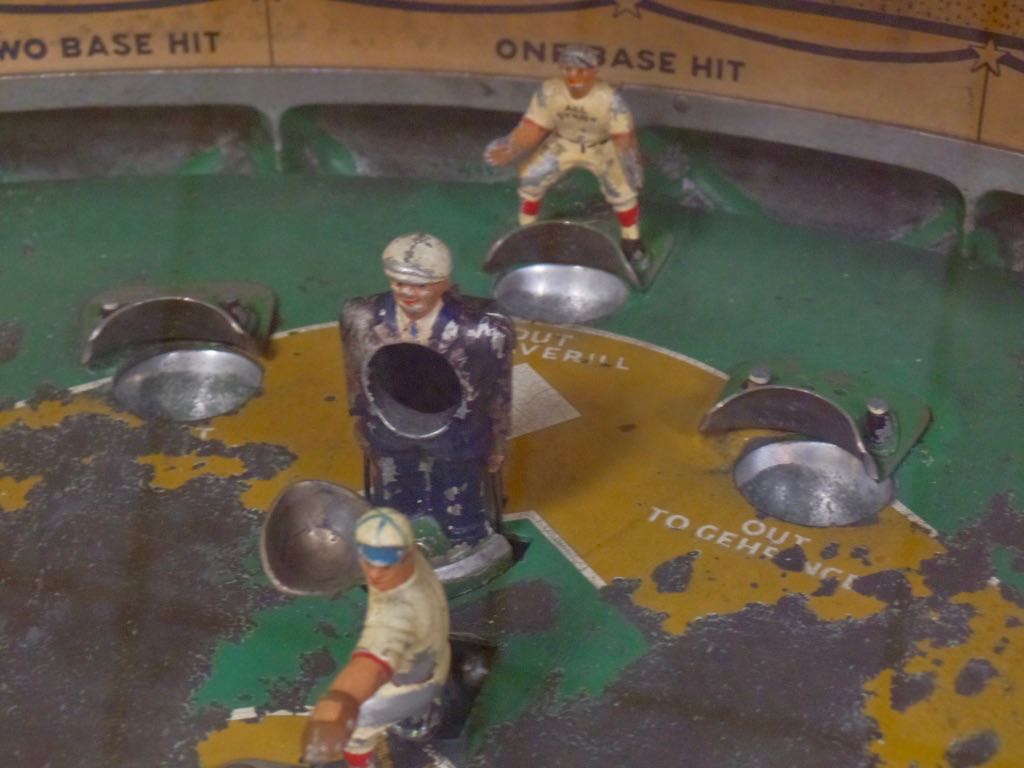 Here's center field, and a hint of why so many balls get out at shortstop or second. 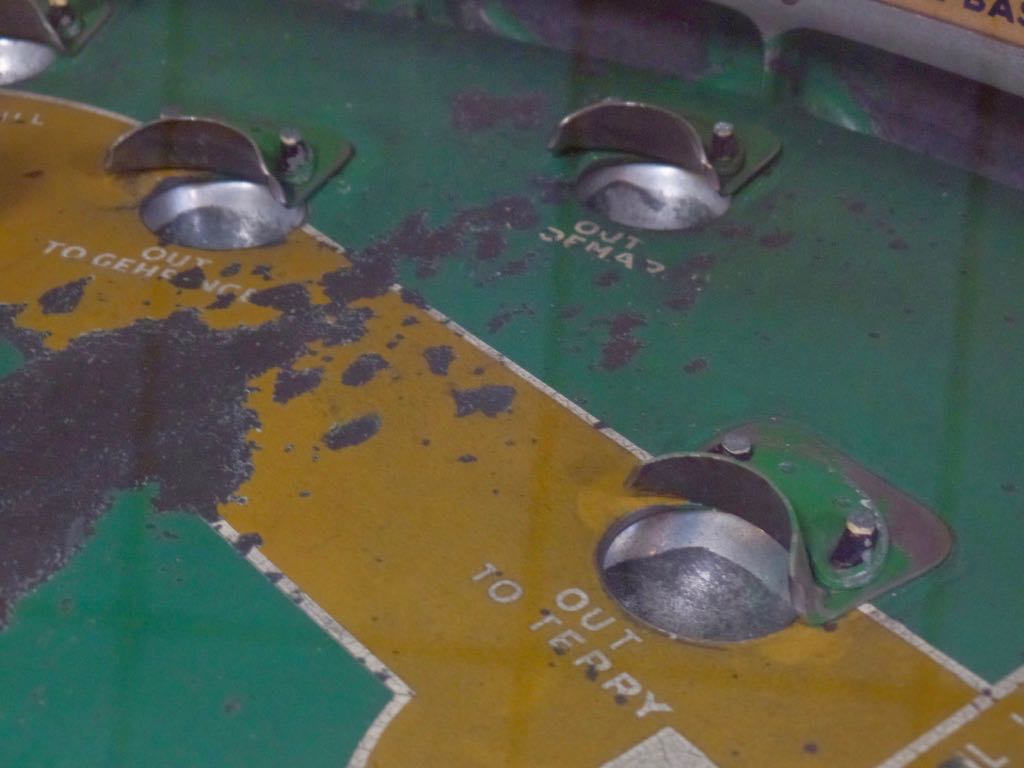 Right field. It looks like the posts are off-center here, but I believe that's to make them slightly better at catching balls than they'd be if they were perfectly centered. Batters are likely going to be hitting slightly sooner than they 'should', and that'll mean the ball goes to the left of where they might be aiming. 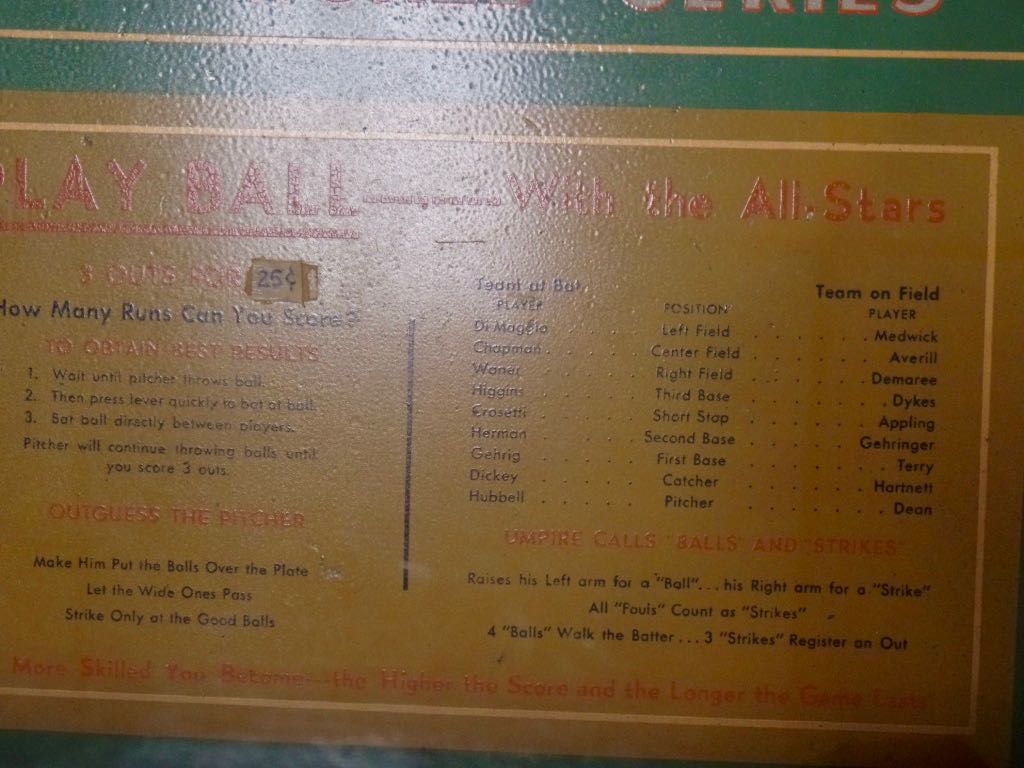 The actual 1937 World Series was between the Yankees and Giants. The lineups, though, aren't any actual team. At bat, for example, we have Lou Gehreg and Bill Dickey, who were with the Yankees in 1937. But also Carl Hubbell, who was with the Giants that year. Dizzy Dean was with the Cardinals in 1937. Well, I suppose it does say you're playing with the 'All-Stars'. The lineups are close to, but not quite matching, the 1937 All-Star Game lineup. 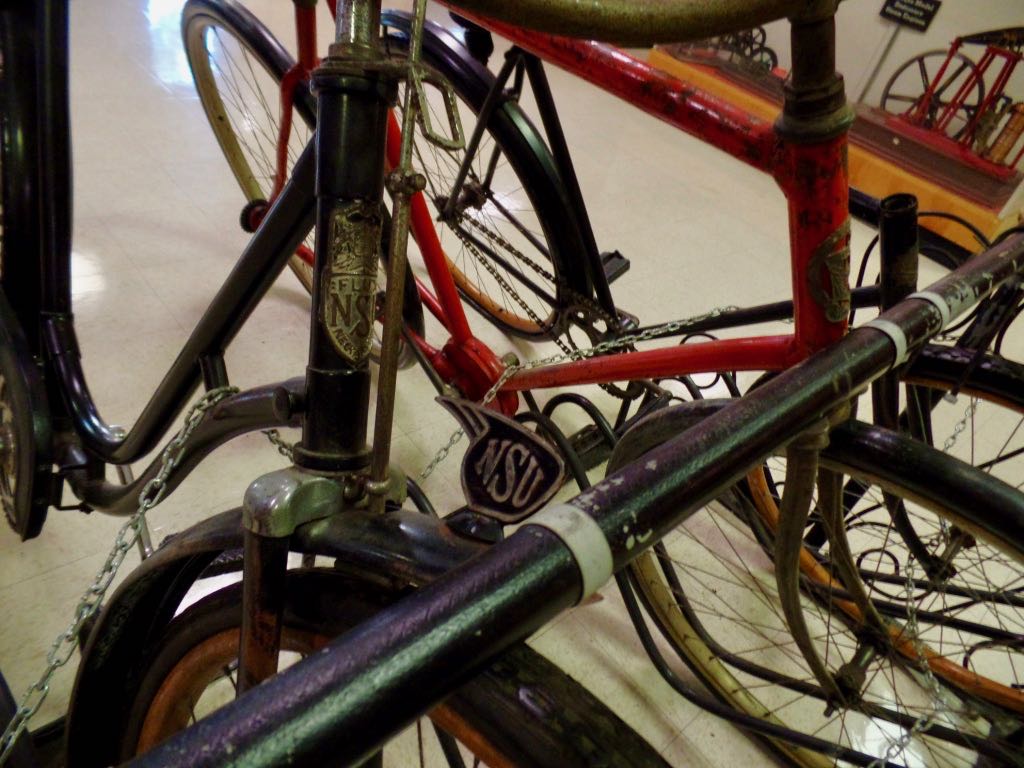 Some old-style bicycles they had in the Town Hall Museum, because ... they offered no explanation. 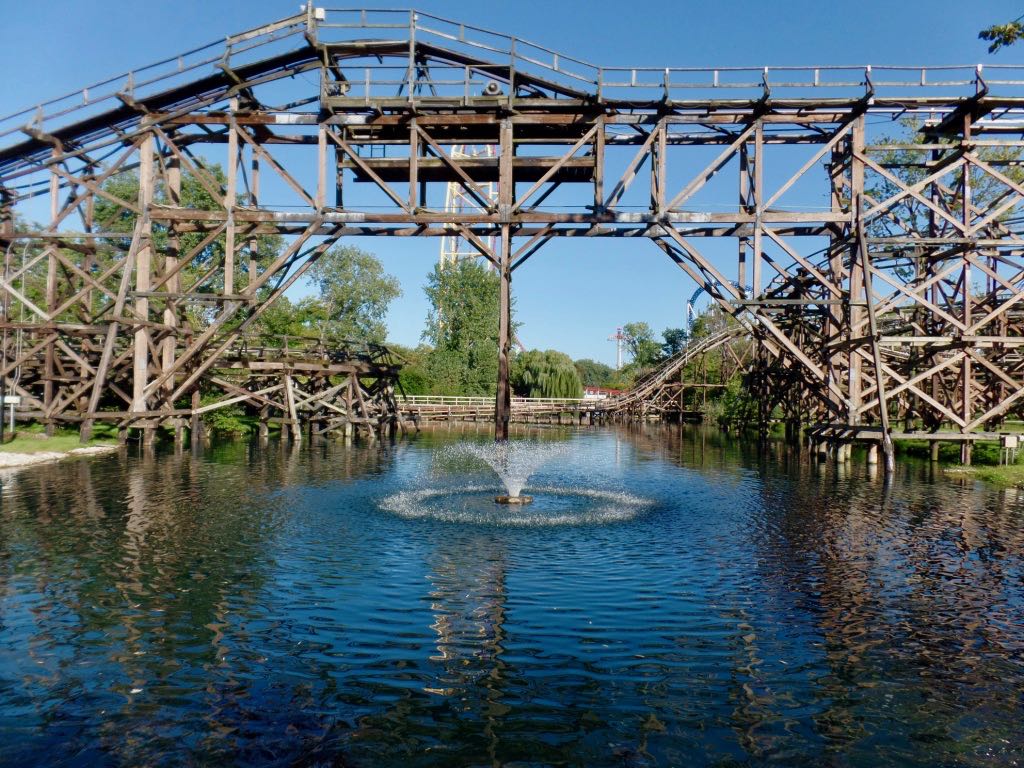 So, to outside. The Town Hall Museum is pretty near the Cedar Creek Mine Ride, and we were there the moment the colors were most gorgeous. 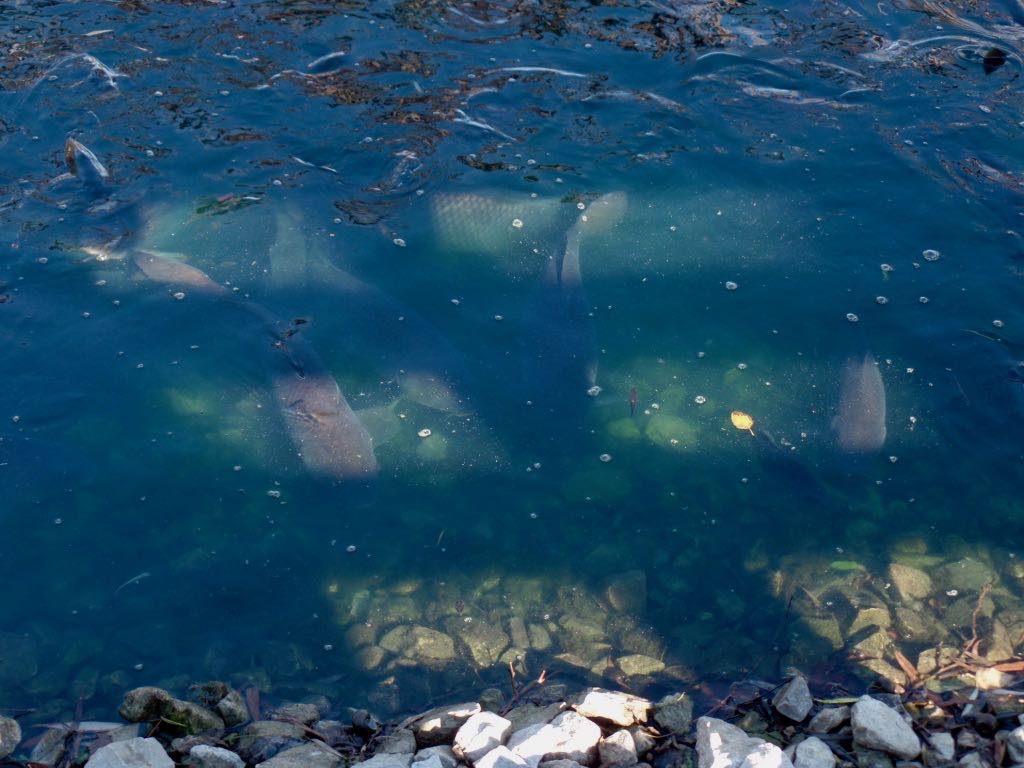 Carp! Oh, they're gorgeous! We should toss them some food, that'll go well. 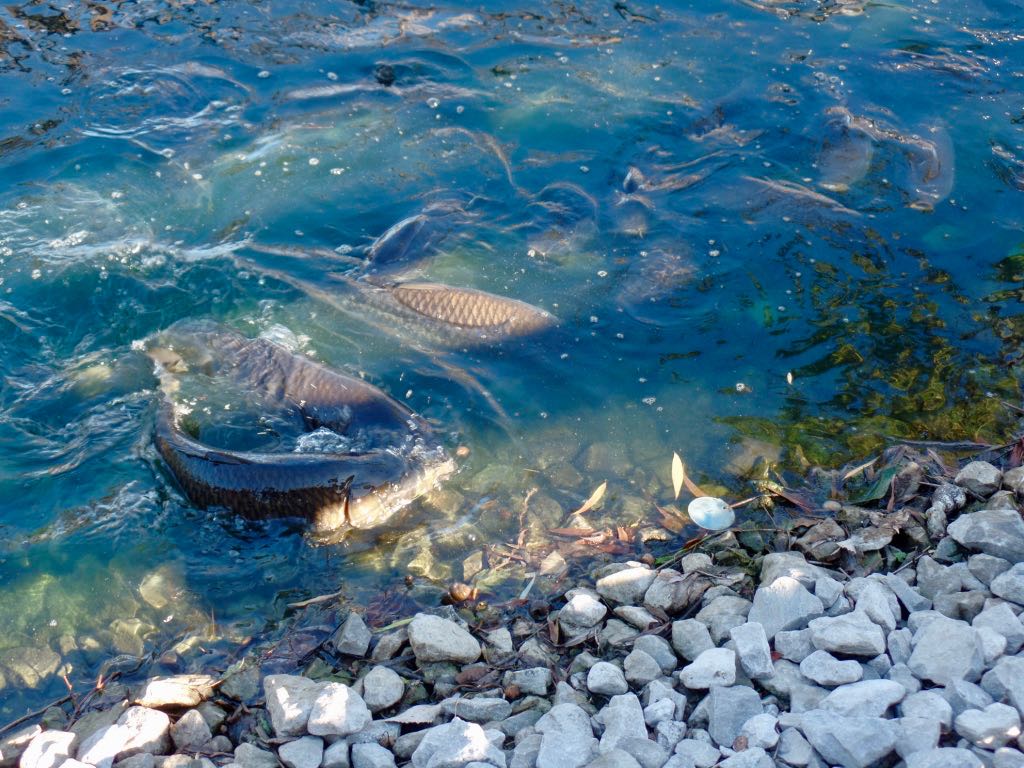 AAH THEY'RE COMING FOR US! STOP FEEDING THEM! IT'S OUR ONLY HOPE! 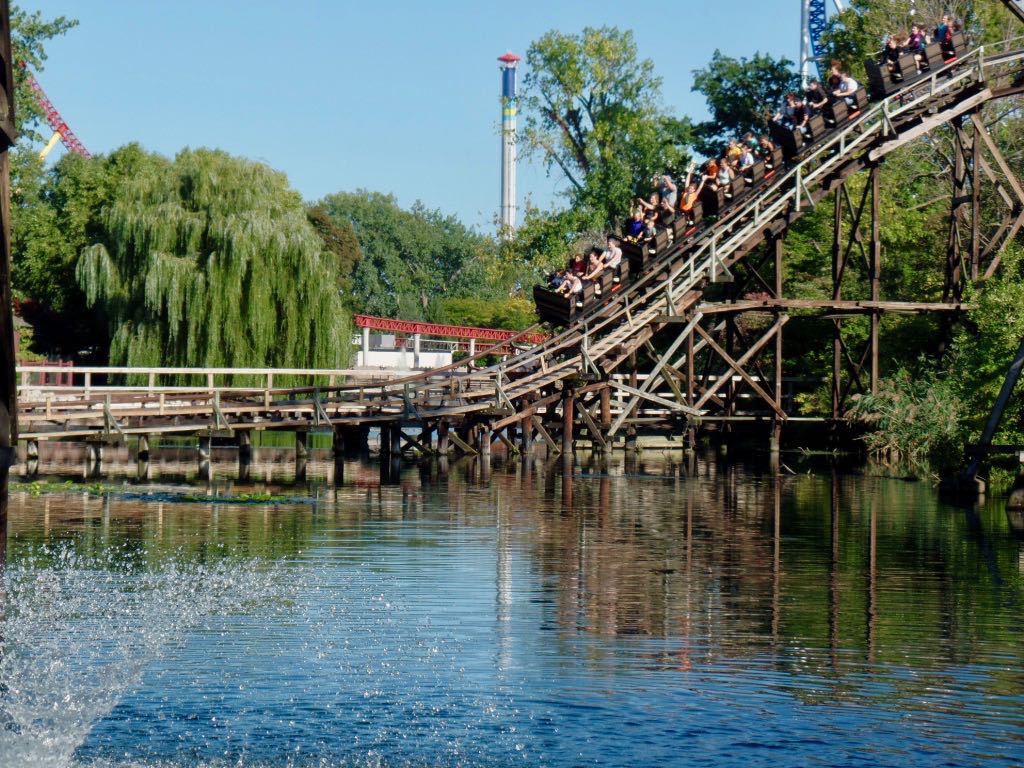 The one big drop on the Mine Ride, again just when the colors are at their most gorgeous. 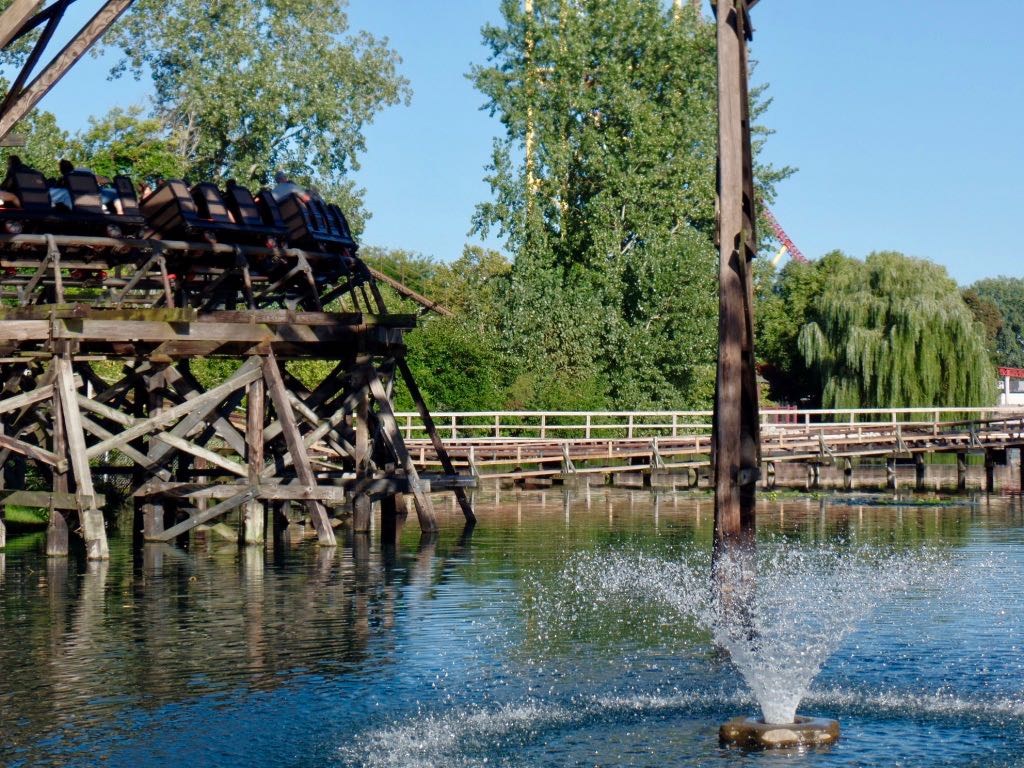 One of the many turns of the Mine Ride, again, taken when the ride was most ready to be a souvenir postcard.