In better circumstances today would have been the start of Holiday World's annual HoliWood Nights roller coaster convention. And I can see now an early-summer trip we might have done. AnthrOhio, then on Monday drive to West Virginia. Spend Tuesday at Camden Park. Then out to Kings Island in Cincinnati, and maybe Kentucky Kingdom in Louisville --- both parks with roller coasters we haven't ridden --- and finish at Holiday World. Maybe come back up and add a day at Indiana Beach, although that would be really pushing things. It's hard to get away for more than a week and a furry con plus five parks would be close to two weeks all told. Would have been quite the start to summer, though.

Cedar Fair has announced that, since Ohio thinks it's safe to open amusement parks, they're opening up Cedar point and Kings Island when they can arrange it. They're daft. I can't see any way that this can be safely done and I won't be rushing to the parks. In fact, I don't figure to go to any amusement parks unless the spread of Covid-19 drops considerably. I've come to realize over the past week that I am comfortable with the thought that I won't go to any parks, or ride any roller coasters, this year, and that is all right.

I'm not doctrinaire about this; if the evidence suggests that the pandemic has cleared up, all right, I'll consider it. But right now my default is no, no amusement parks. It's a sobering thought, but at least it will let me catch up a little in my photos here.

Speaking of photos, here. In September 2018 the guy who owns the VFW Ann Arbor Pinball Hall of Fame Museum club overcame his reluctance to let people in and opened it for a couple hours. It's got hundreds of machines in great order (to join the club you have to put in a certain number of hours repairing games), with generous tilts (which is one of the reasons there'll never be the state championship held there, as perfect a spot as it would otherwise be), and of course we went. 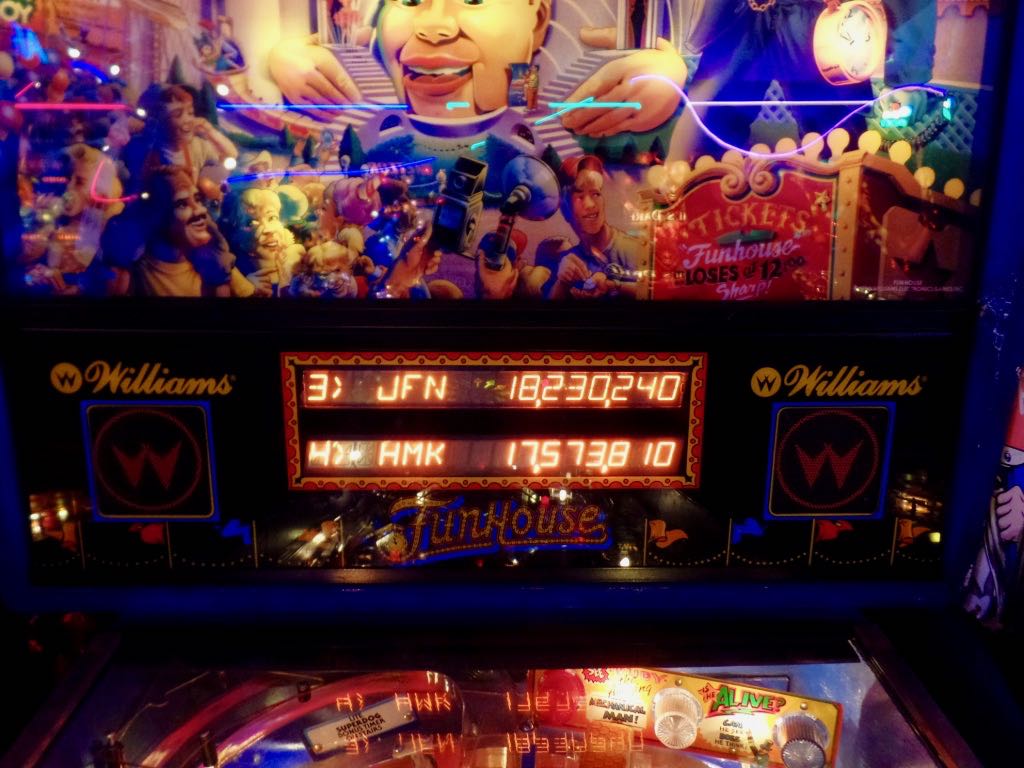 Oh also we dominated the high score table for FunHouse. 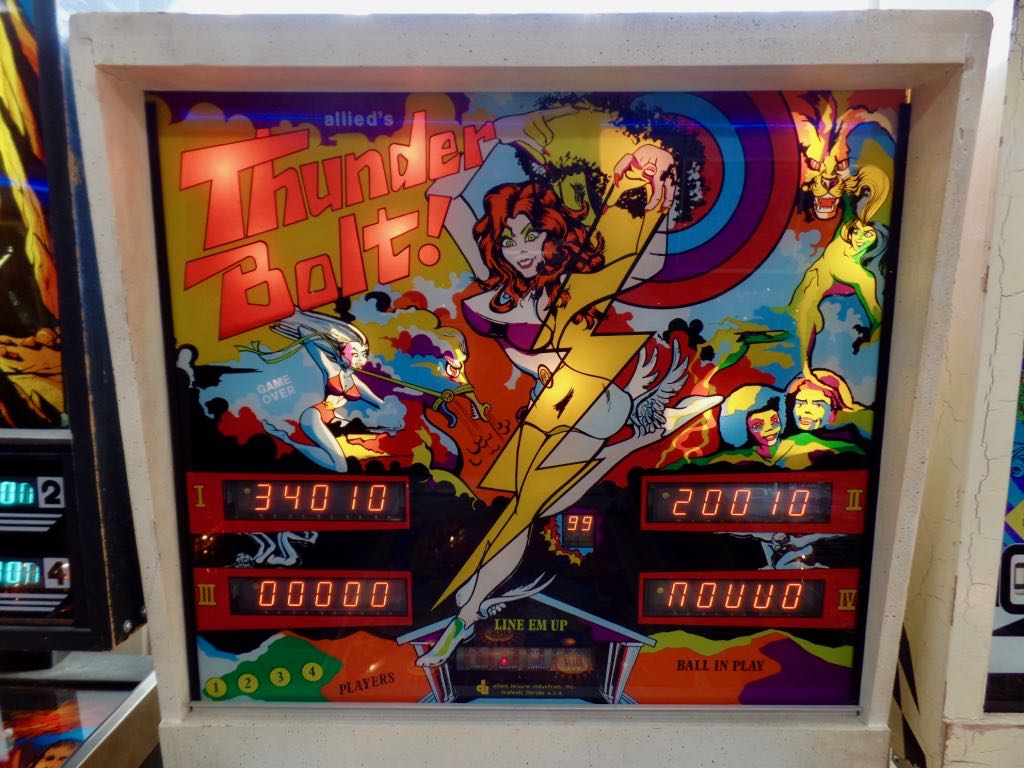 Allied's Thunderbolt is a fair enough game, but it's got a fantastic backglass that I've probably shared before. I did not remember sharing the Dolly Pardon early-solid-state game, though. Also on the left: a fine example of the Eight-Ball made in the era when pinball figured there was no sense asking about licensing characters and likenesses, just do it, man. 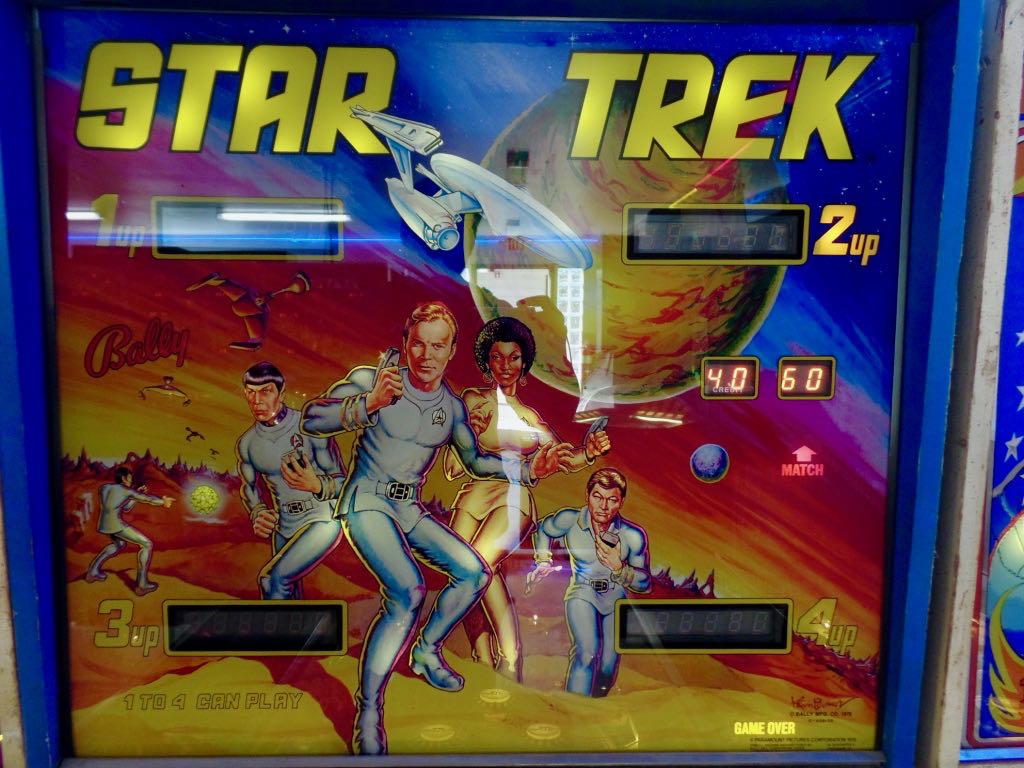 And here's an early-solid-state Star Trek from Williams, showing a rare era when they thought they would make Uhura part of the show. 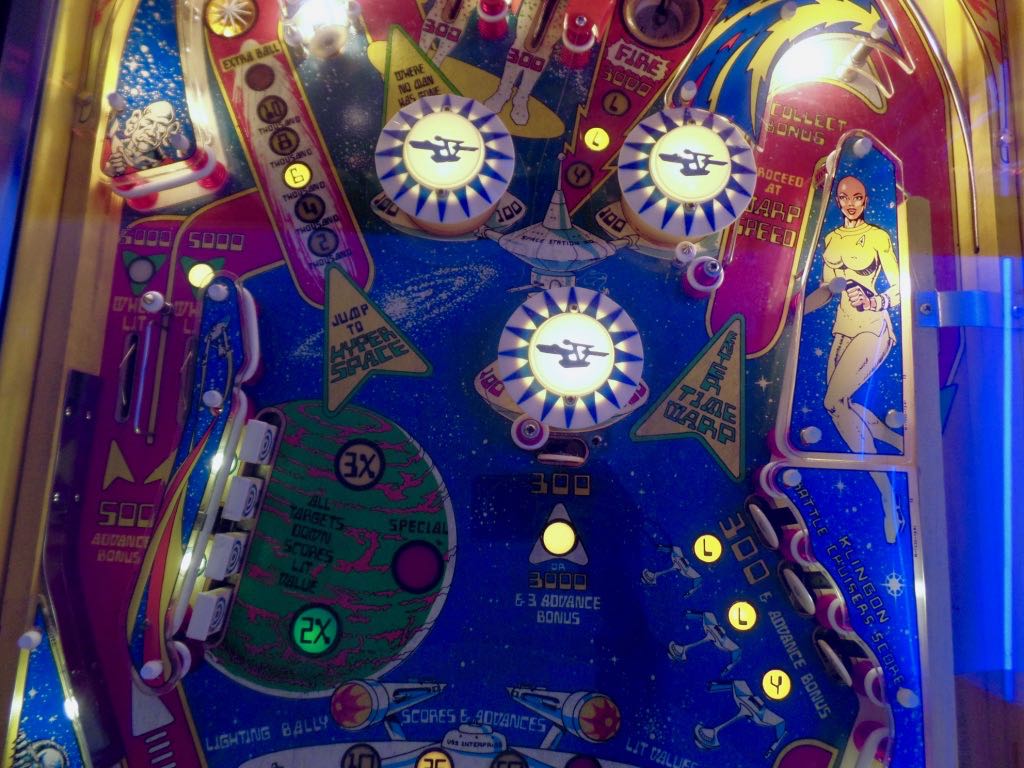 Star Trek playfield, showing just how in flux the Star Trek concept was at the time. For one, 'hyper space' has really not been a Star Trek thing. Time Warps weren't all that much of a thing in Star Trek at that point either (believe it or not). And notice that the starship at the bottom of the picture (sorry it's cut off) has the round nacelles of the TV show rather than the rectangular nacelles of the final movie effects. I have no idea what Big Ear Guy in the upper left is. 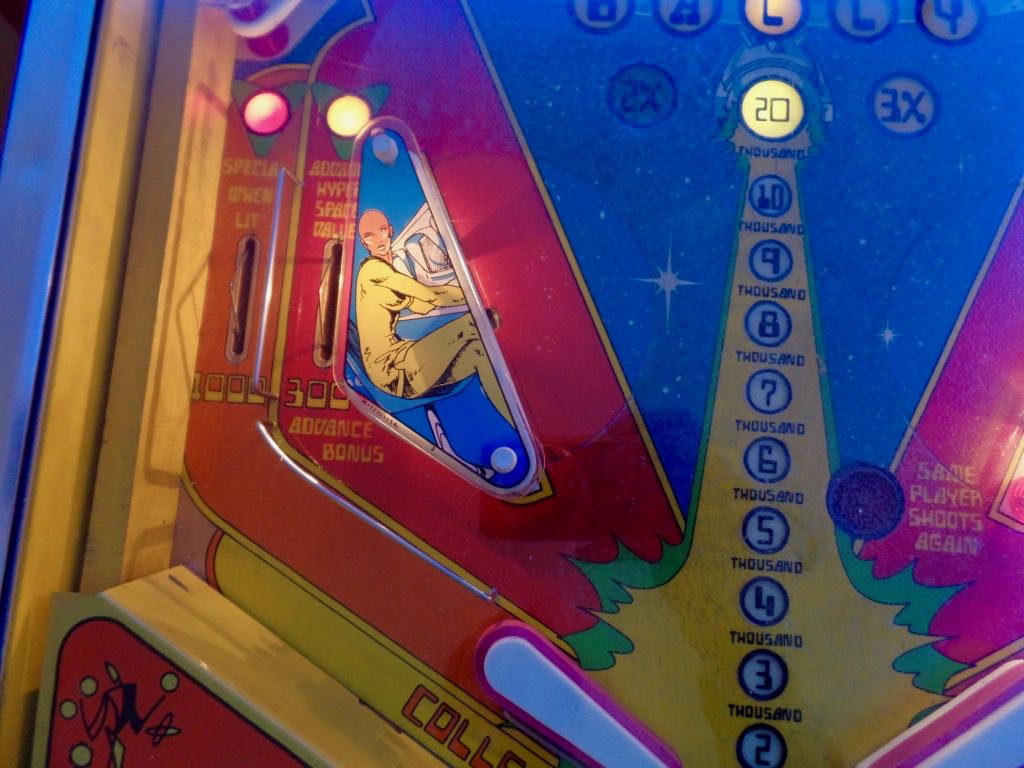 Also, wow, the pinball makers had the mistaken impression that Lieutenant Ilia was going to be part of Star Trek. Neat. 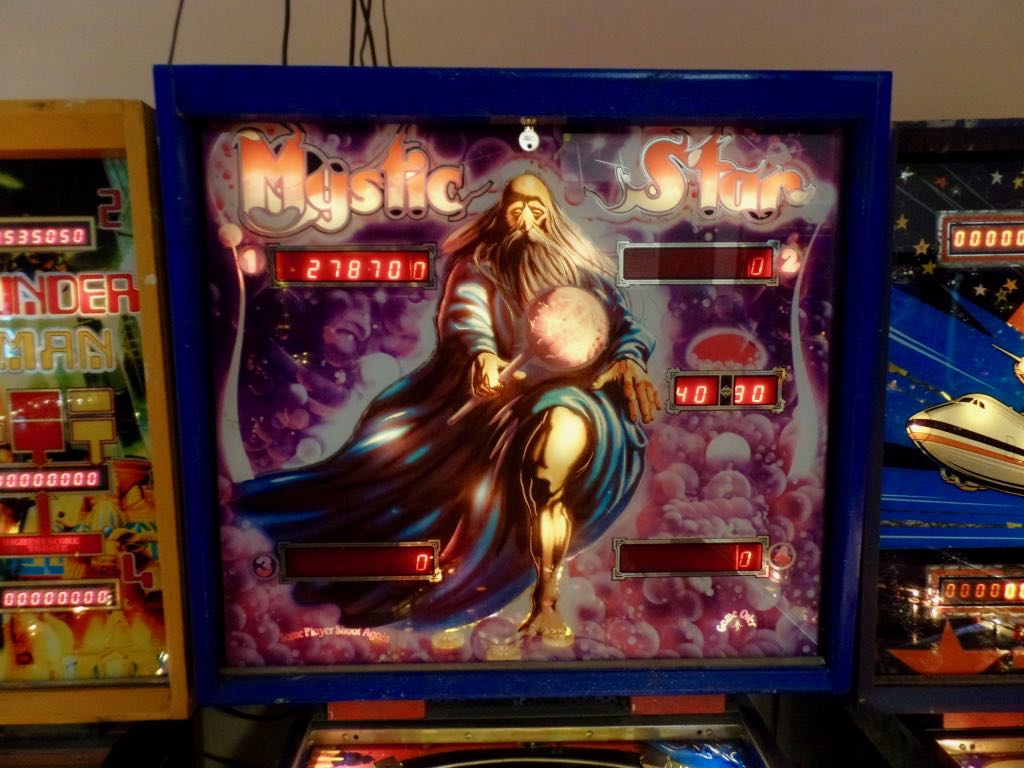 Part of what's great in the VFW is the guy behind it has a bunch of weird obscure games from companies you can't really swear existed. So here's Mystic Star, backglass produced by literally any fantasy novel of 1981. 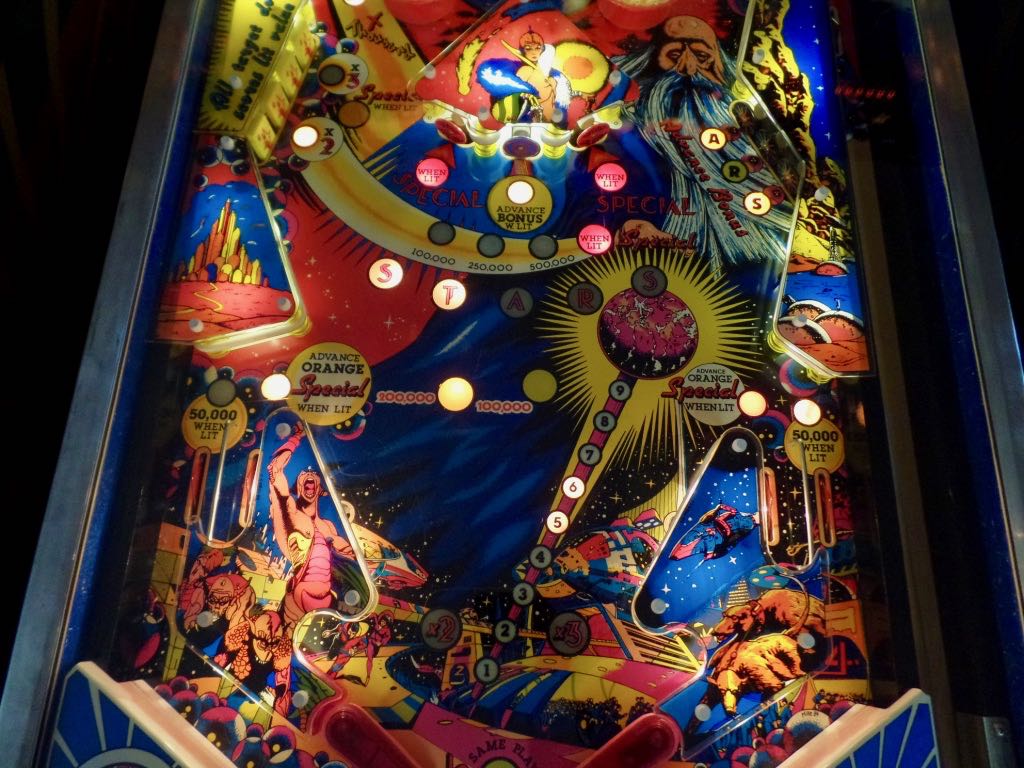 This is the playfield for Mystic Star, which hasn't got a lot of interesting targets but makes up for it by having every piece of art possible on it. 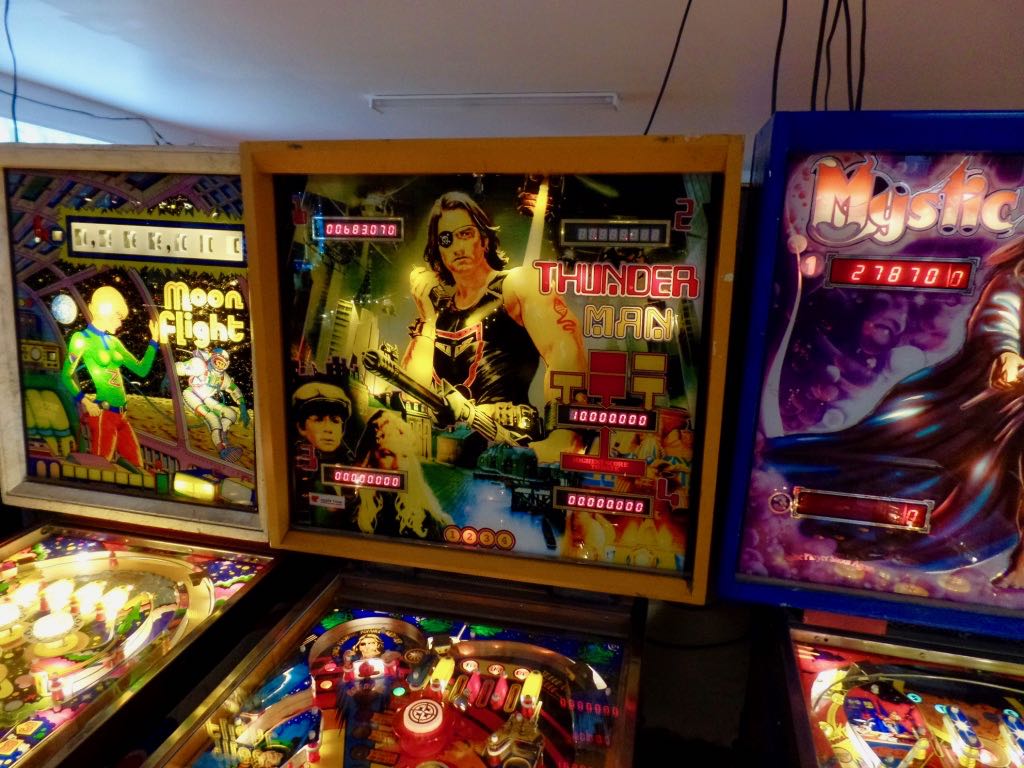 Thunder Man is the exciting pinball game version of the popular movie ``I don't know, it's just on USA all the time from 1985 through 1988''. 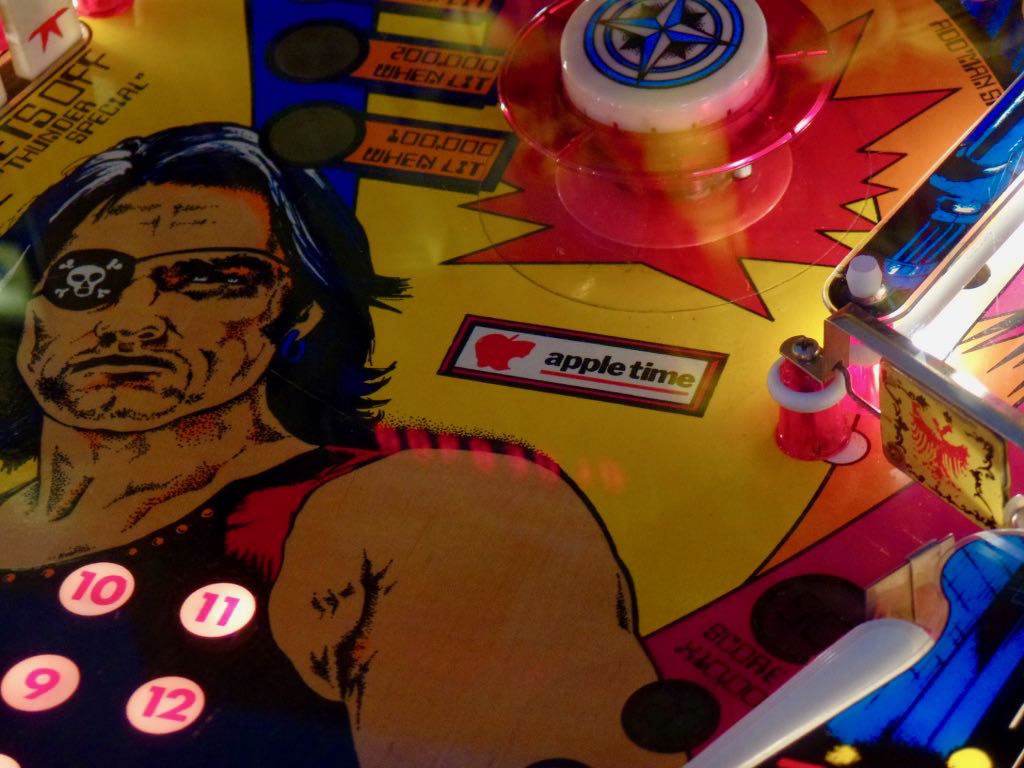 And the company that brings it to you? Apple Time! There is no end of stuff to love about their budget Apple branding. The game was made back before Apple gave up the rainbow logo. 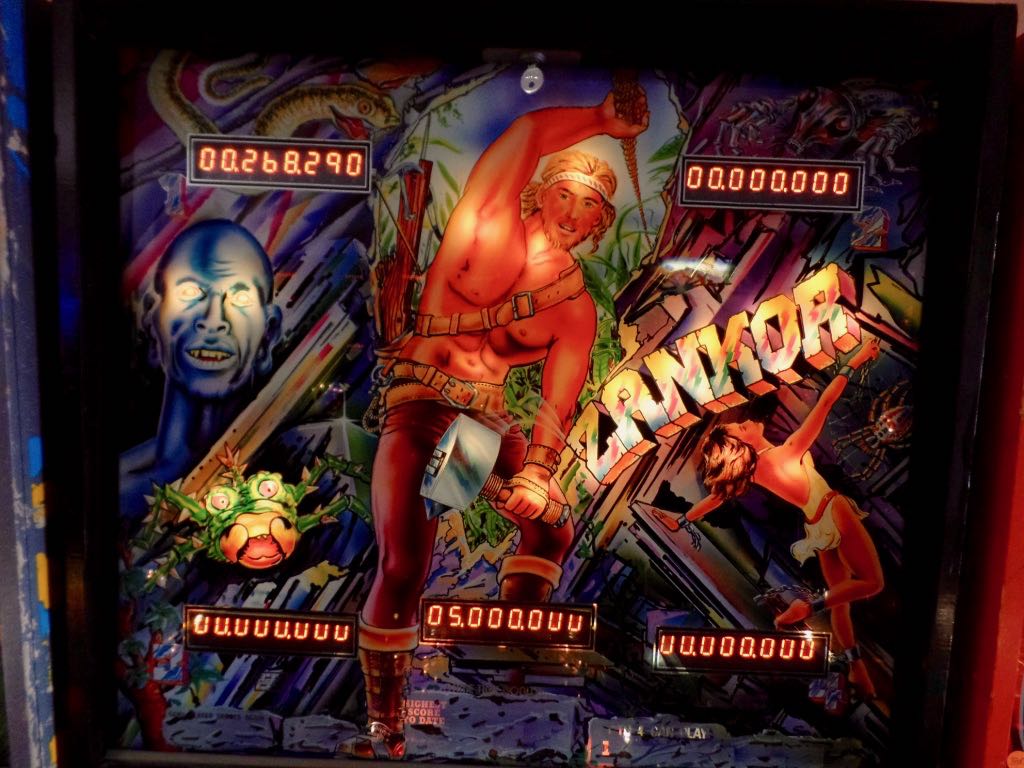 Zankor is one of the Zaccaria pinball games, from Italy. These games may have only OK play, but they have fantastic art. 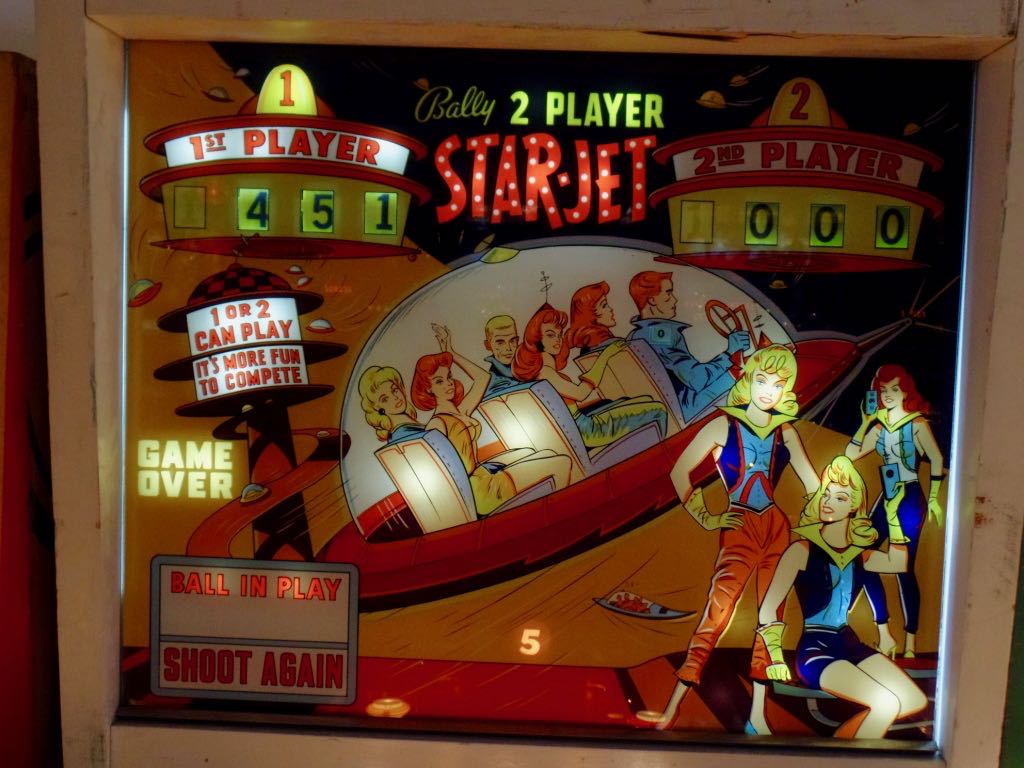 Bottom of the Star-Jet playfield, for all of you who wanted beehive hairdoes in glass bubble helmets, as you do. (Yes, I know her hair's not a beehive, but you also know at least some version of this artwork was.) 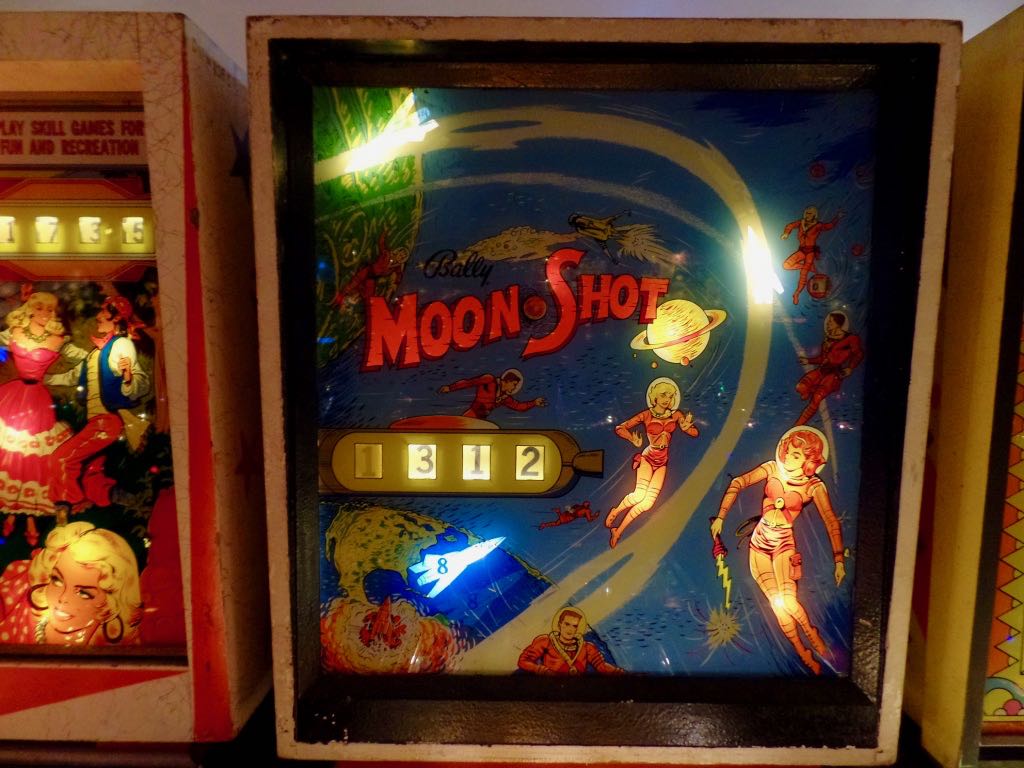 Moon-Shot's a more common early-space-race game. At least I see it more, but that might just be because Pinburgh and the Silverball Museum have it. 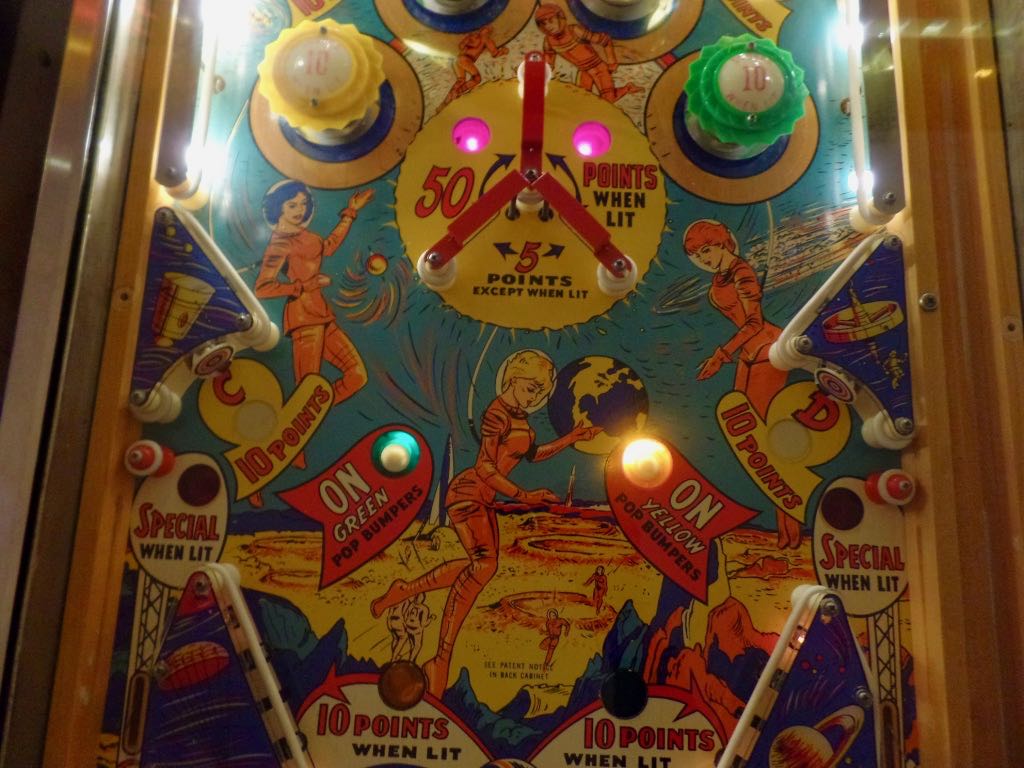 Moon-Shot's playfield. Among its fun features is that little Y-shaped thing, with one-way gates on the lower legs and a pass-through gate on the top. 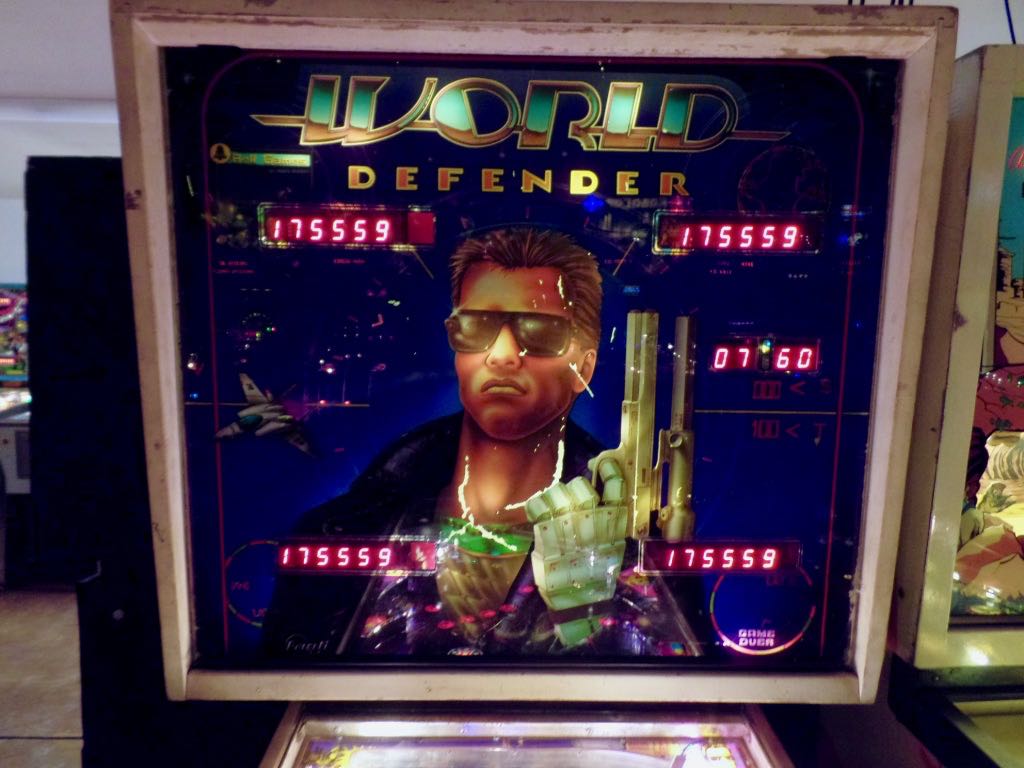 Getting back to the weird obscurities here: 'LVORLD DEFENDER', based on the classic movie, ``I don't know, it's just on TBS all the time from 1987 through 1990''. 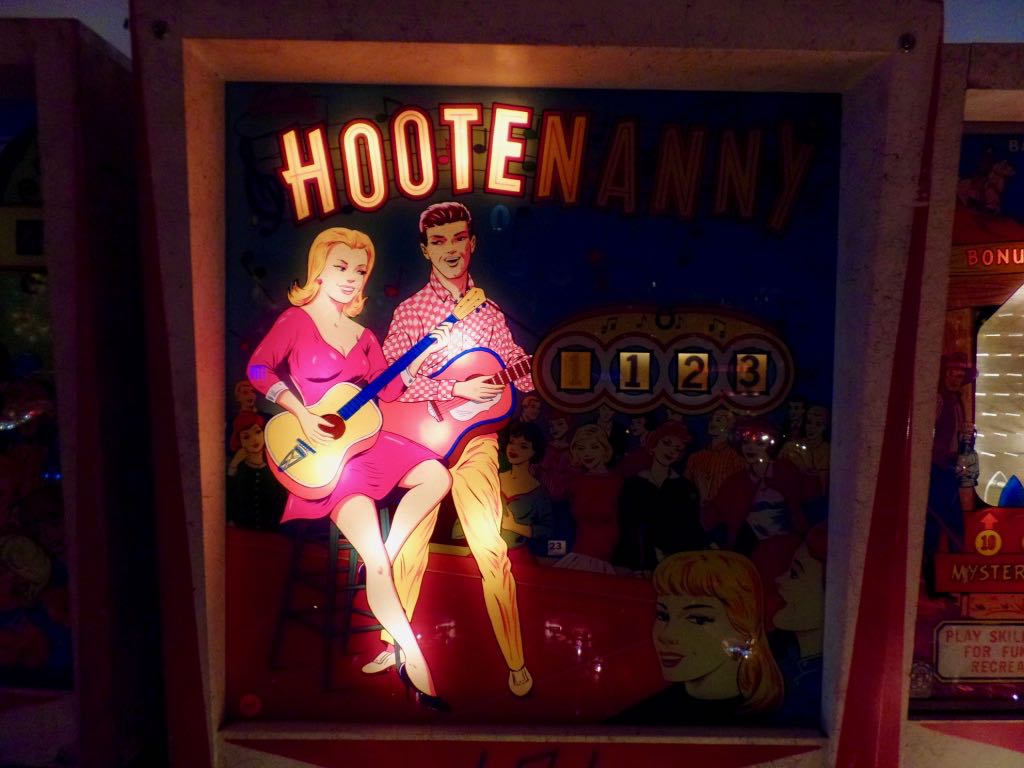 Hootenanny, a 1963 game from Bally, has lost some of its lights here but at least it's got the most important ones? The game's of some historical significance as it was Bally's first table to have a (passive) bumper. 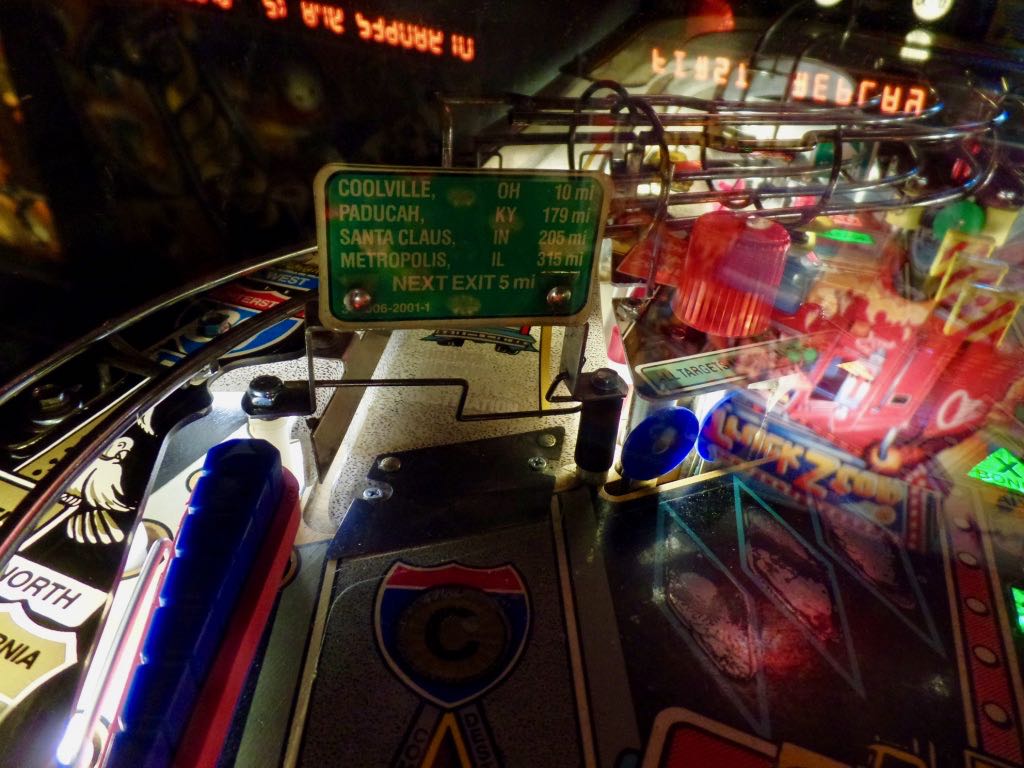 One of the ramps of the 1988 Bally/Midway game Truck Stop. (It was the first game the companies made after merging and there's an art detail about the merge on the playfield.) The ramps have mock highway signs and hey, look at that: Santa Claus, Indiana, home of Holiday World! So this game gets at least a listing with an asterisk when we compile ``amusement park-themed pinball games''. And isn't it neat how I tied this whole post together? But wait, there's more ...

Trivia: The sixth-largest city in the United States of the 1840s was Cincinnati. Source: The Long Space Age: The Economic Origins of Space Exploration from Colonial America to the Cold War, Alexander MacDonald. (Nicely done, isn't that?)

PS: Reading the Comics, May 29, 2020: Slipping Into Summer More Edition and I discover how Inspector Danger reuses stuff.