This is going to be a big photo dump today, but it's in a good cause: it clears out nearly all of October 2018! Other than the obvious, anyway. It's a blend of Halloween and Halloween-themed pinball stuff. You'll see. 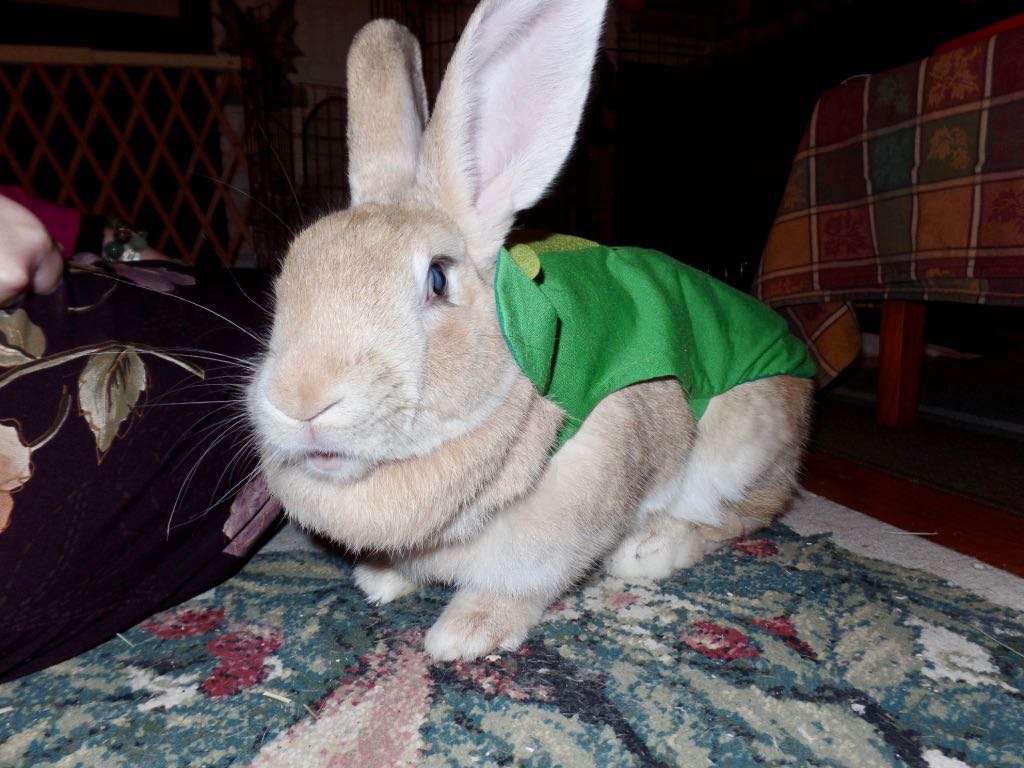 We got our pet rabbit a Halloween costume! Here she is modeling the dragon look, with a mouth open just enough to look flabbergasted by it all. 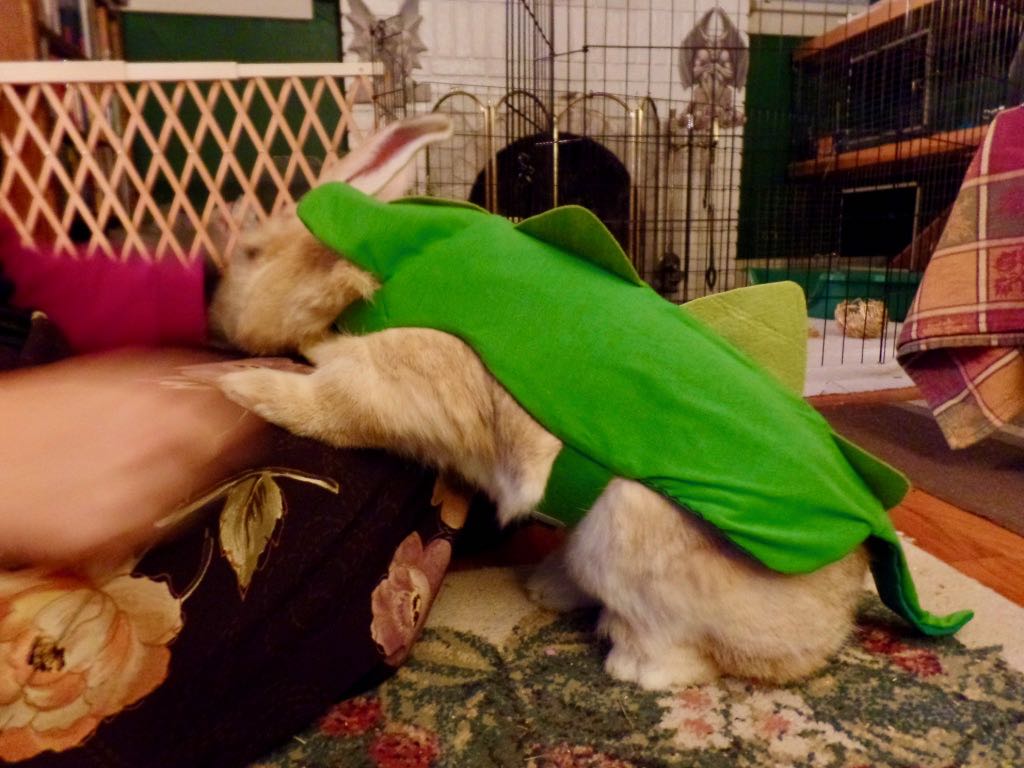 And here dragonbunny asks whether this is really something she needs to deal with. 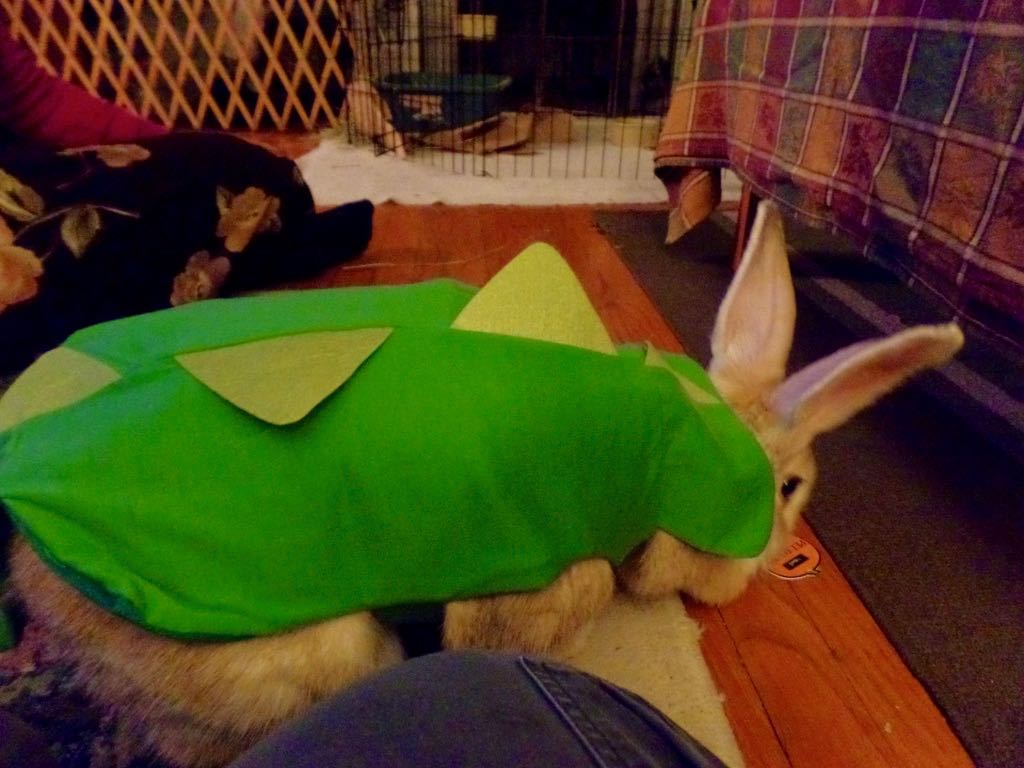 Here, dragonbunny notices a thing on the floor and examines whether it's something she can chew. (She can chew everything.) 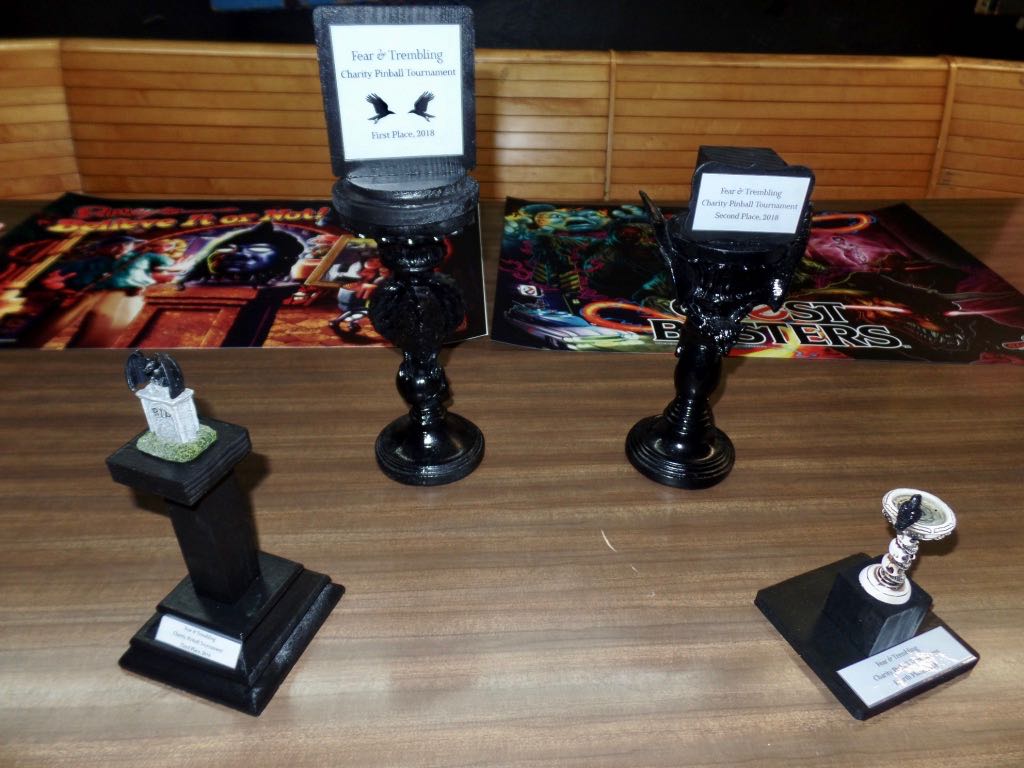 Back to pinball! Here's trophies and backglass prizes for the 2018 Fear and Trembling tournament. This was a pin-golf, where you try to complete various objectives in as few ball plunges as possible. But the trick here is you had two objectives you could aim for, and had to pick one, and then you went and completed the other while failing to do the first, and feel bad about yourself. 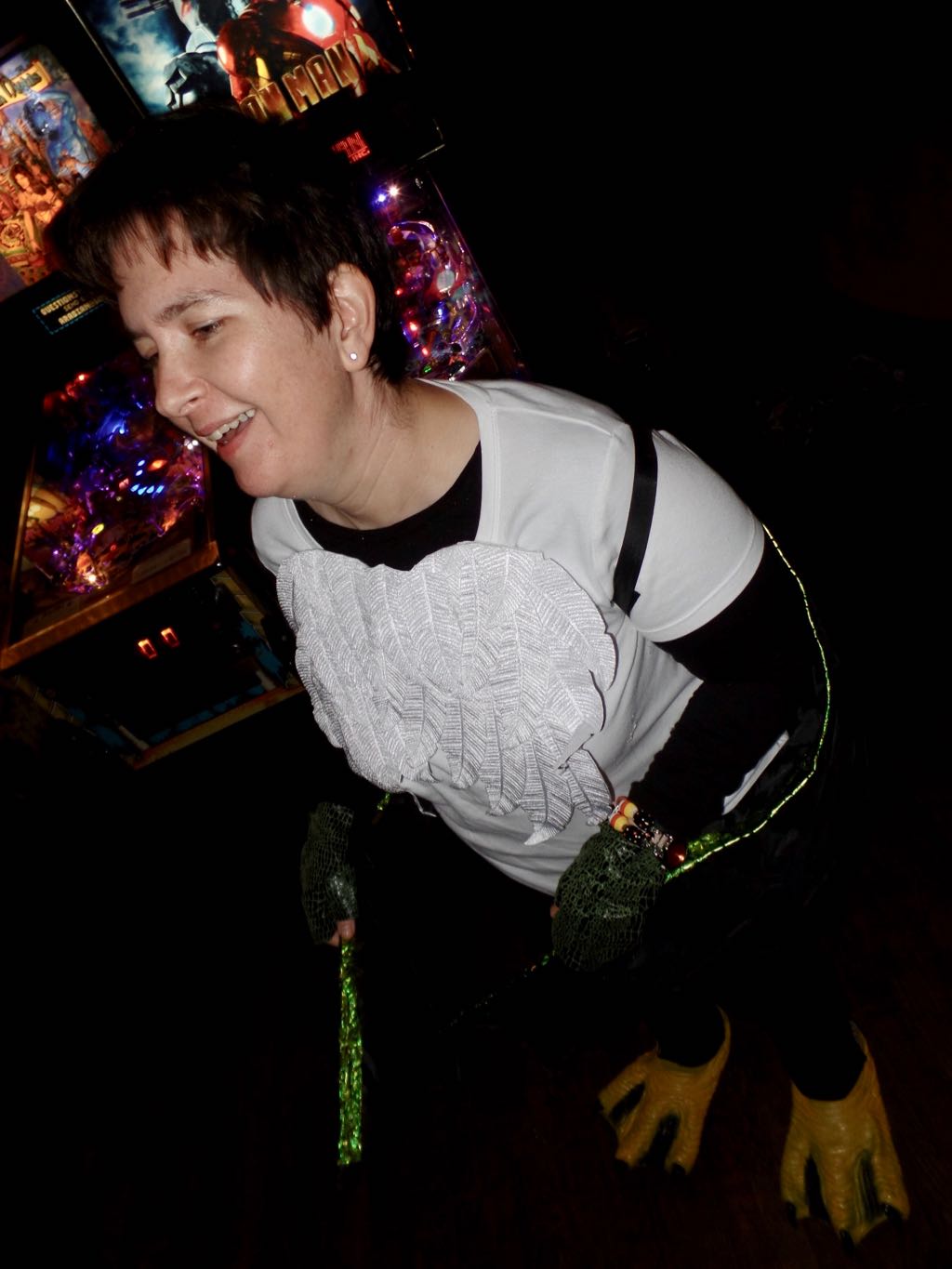 We were invited to attend the tournament in costume.

bunny_hugger here has on most of the cockatrice outfit she'd built. (She'd taken the head off so she could give instructions.) 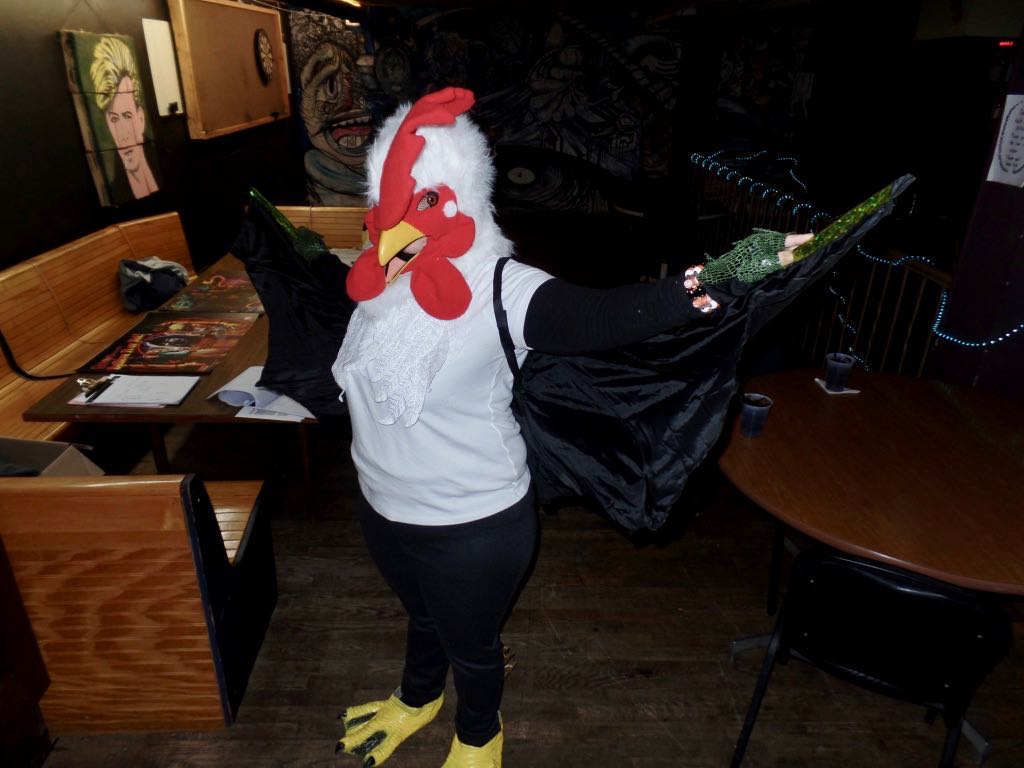 Here she is in full costume and dominating one of the many, many dark corners of our hipster bar. 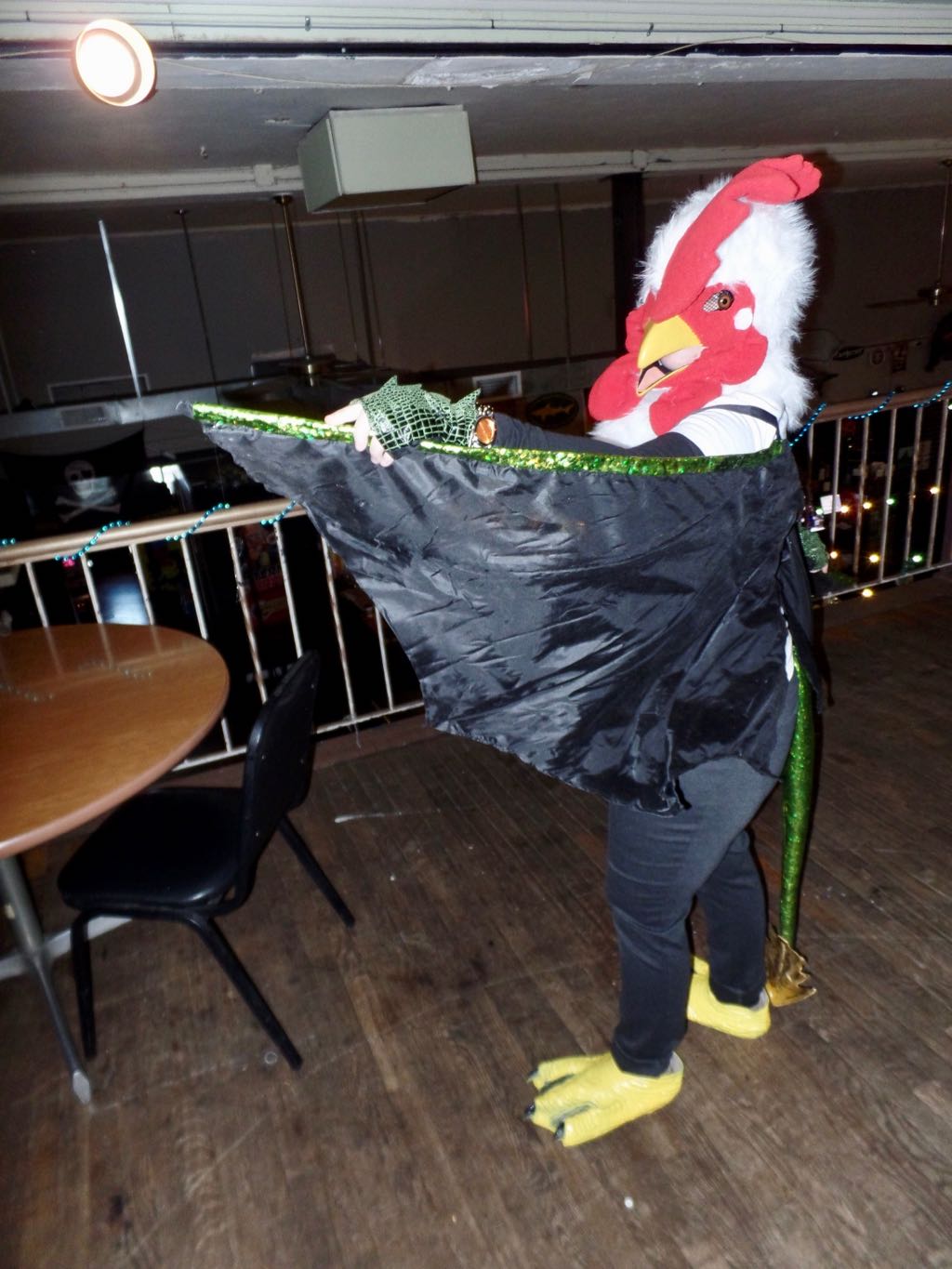 bunny_hugger shows off her home-made wings. 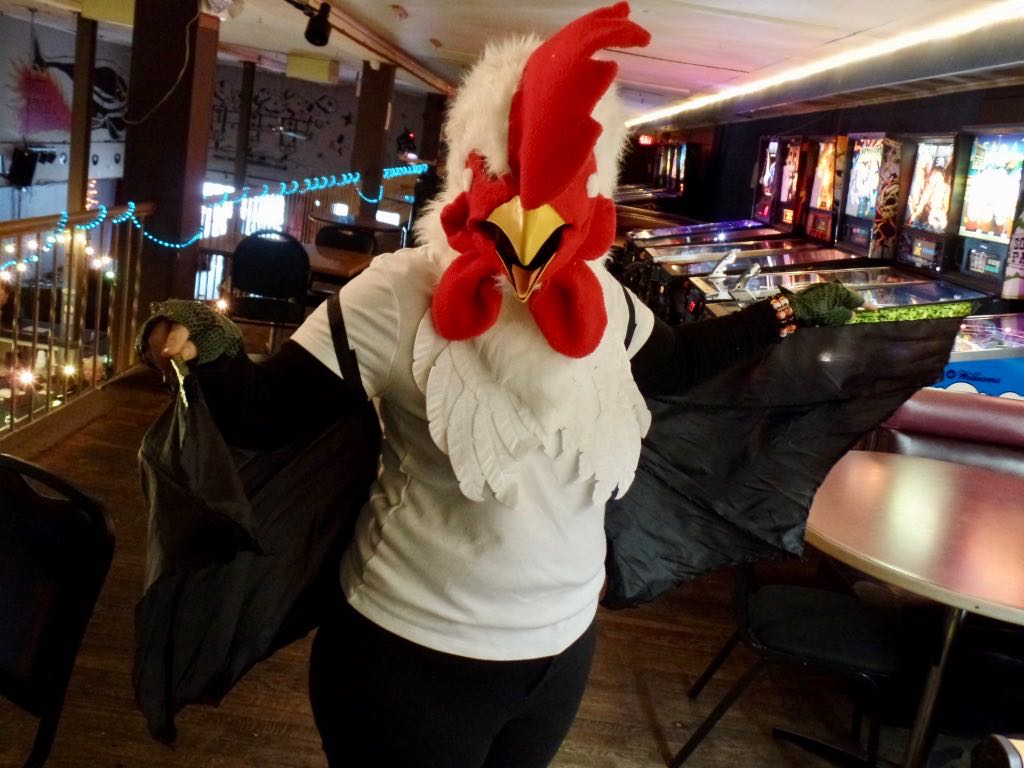 And now she welcomes you to the cockatrice's lair! 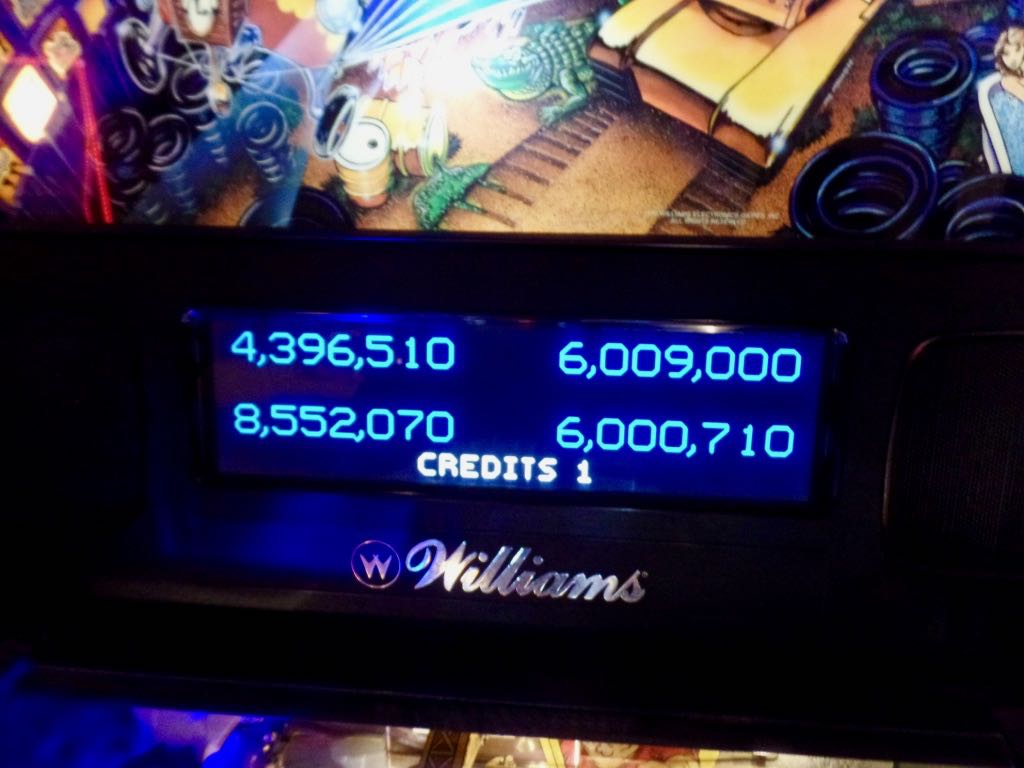 This one, well, that's a pretty close finish for players two and four. (Although as it's pingolf, what matters is whether the objective was met, not what the score is.) 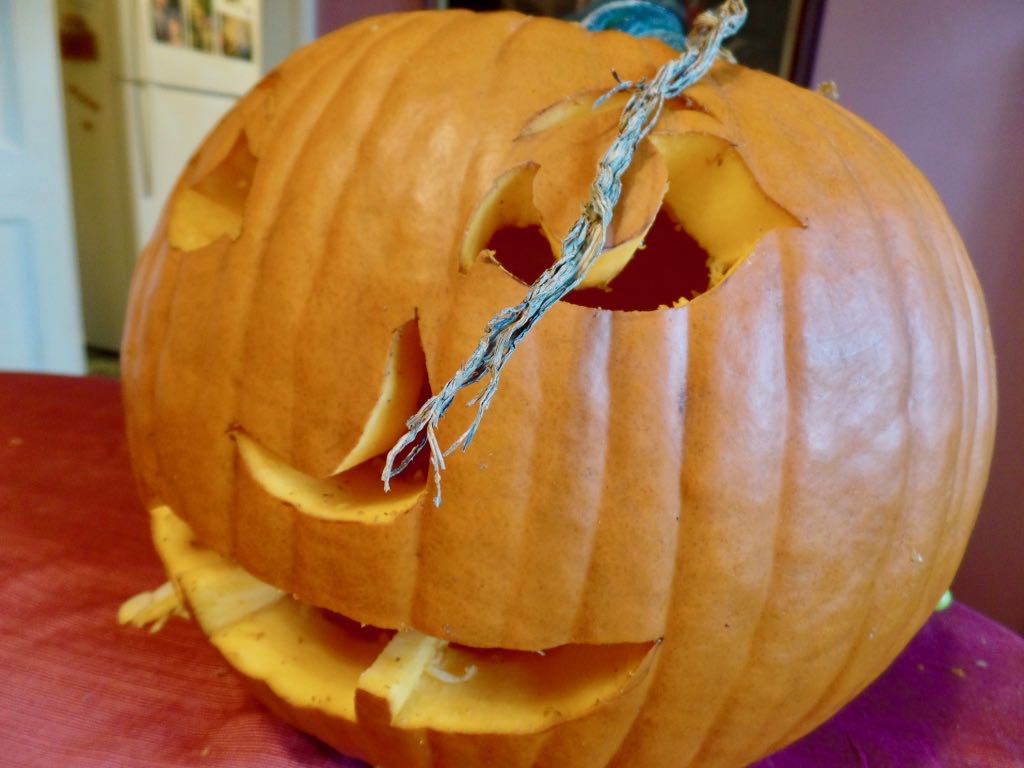 Pumpkins! I got a couple to carve with

bunny_hugger's parents. This is the pumpkin I picked out for

bunny_hugger because I knew what she wanted: one with a lot of stem. 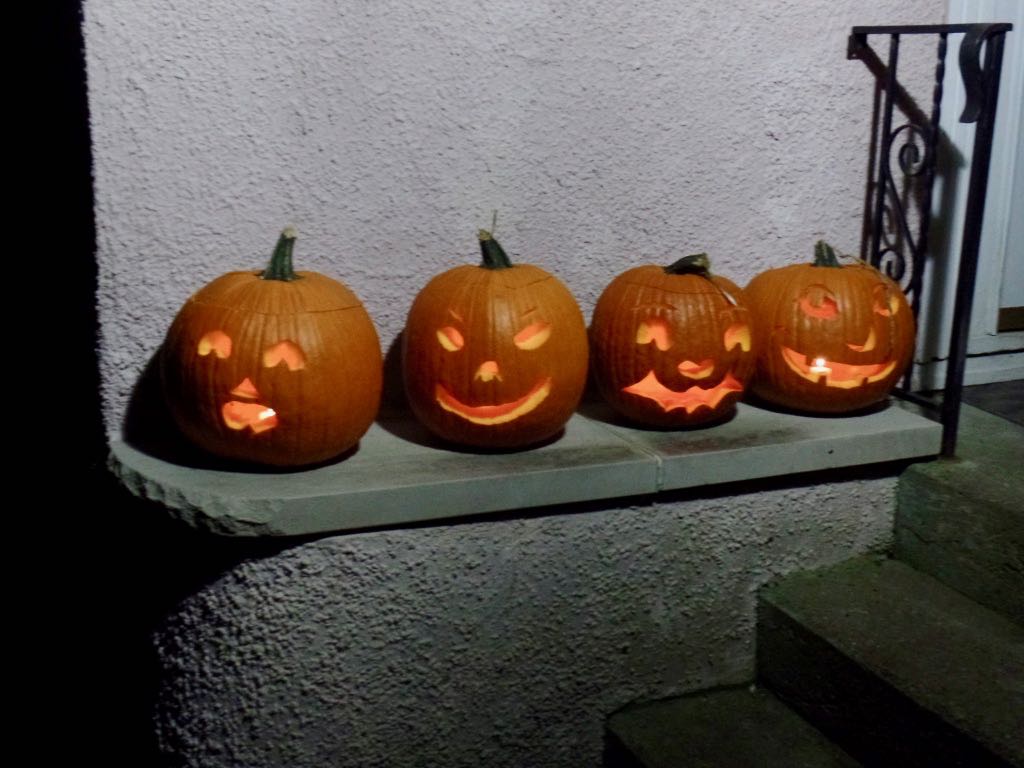 Here's how our pumpkins looked at night, after the carve. 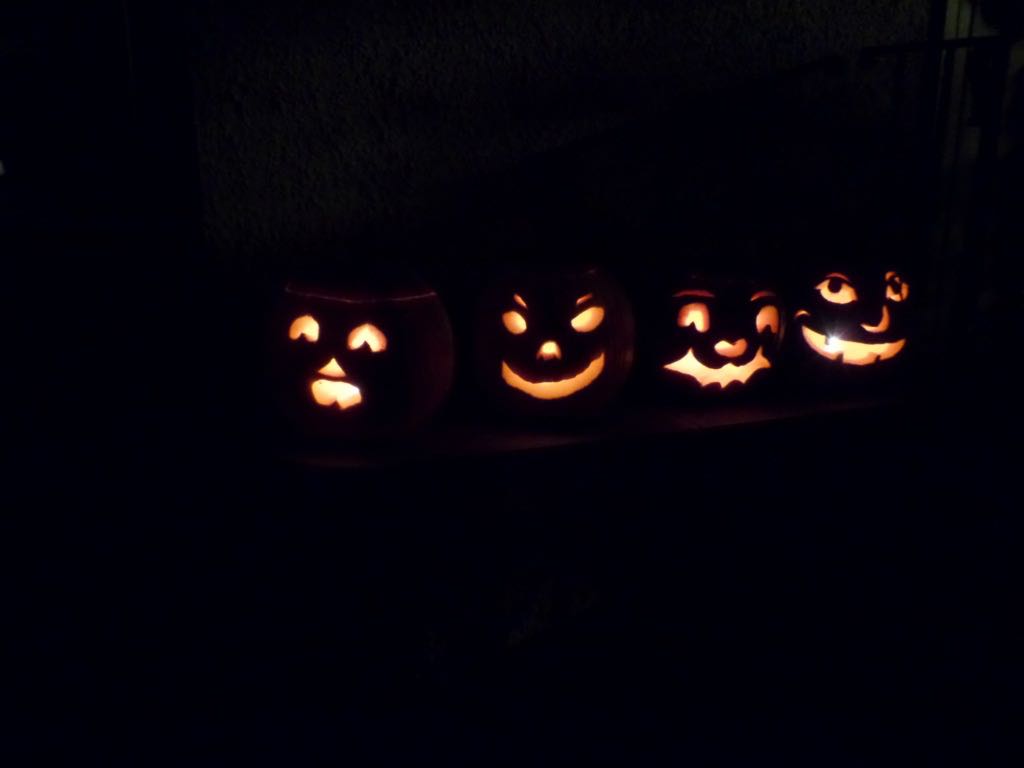 And what they look like without the porch light on. My pumpkin's the third one in the row, with the face meant to look like a bat silhouette, because I am always pulling some nonsense like that. 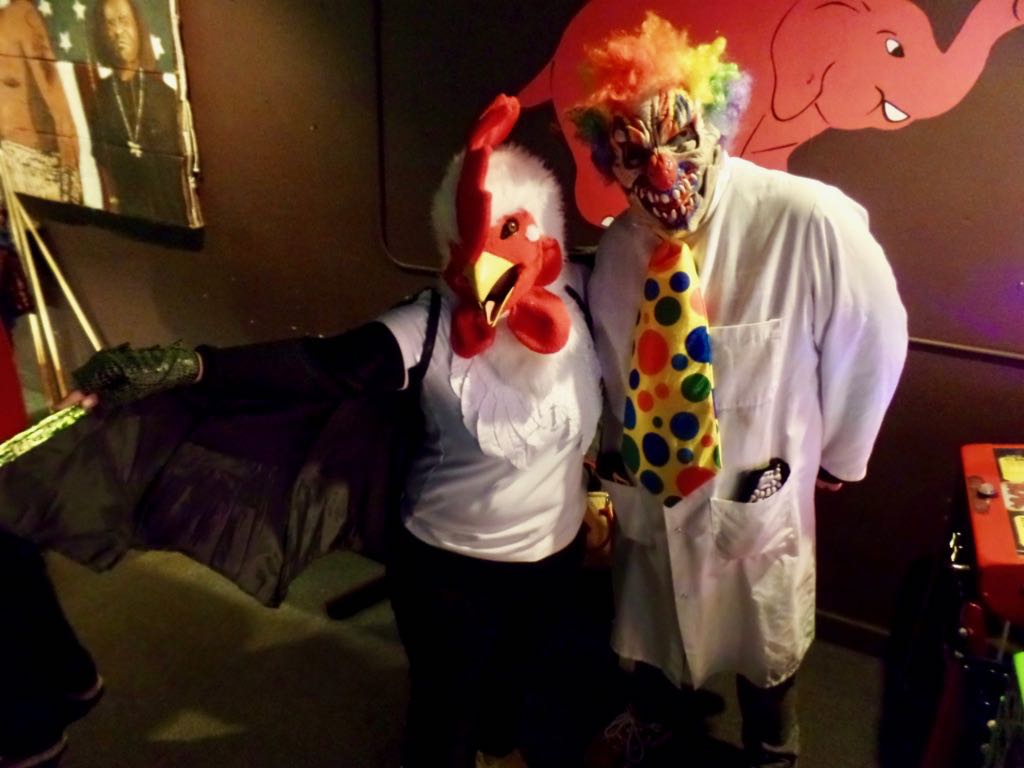 Halloween at the hipster bar!

bunny_hugger got her costume back out, and here she's joined by MWS for some photos. 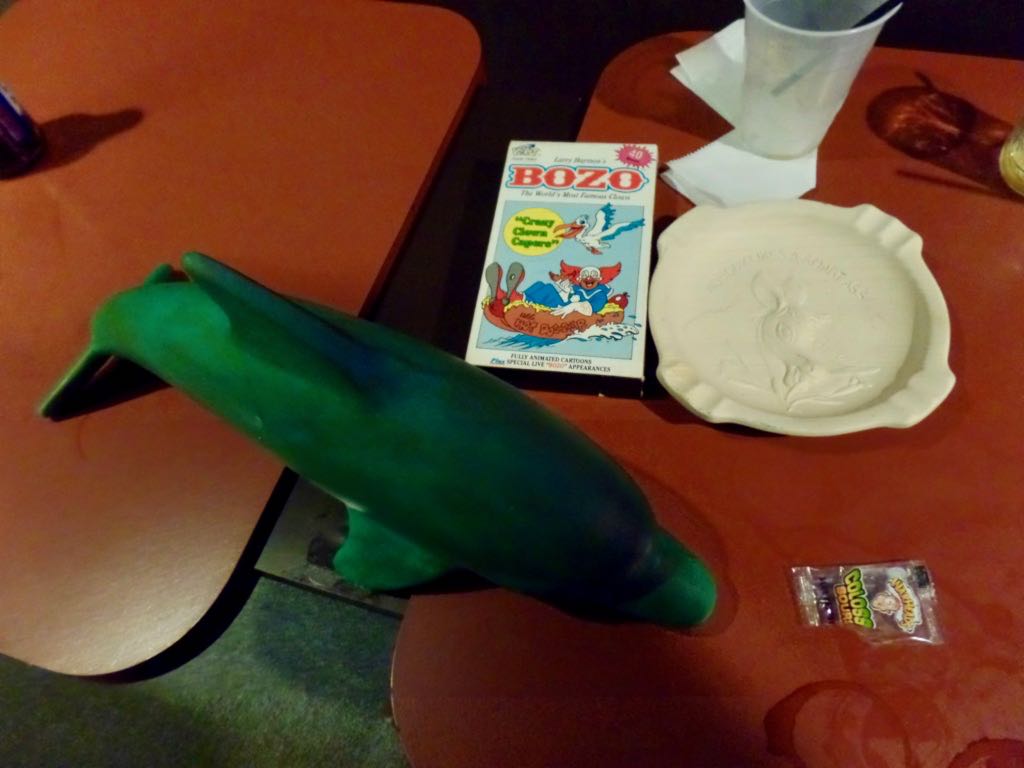 MWS won a bunch of prizes in the bar's costume contest, or at least by a lucky drawing. I forget which. The prize theme was ``$20 in the thrift store''. 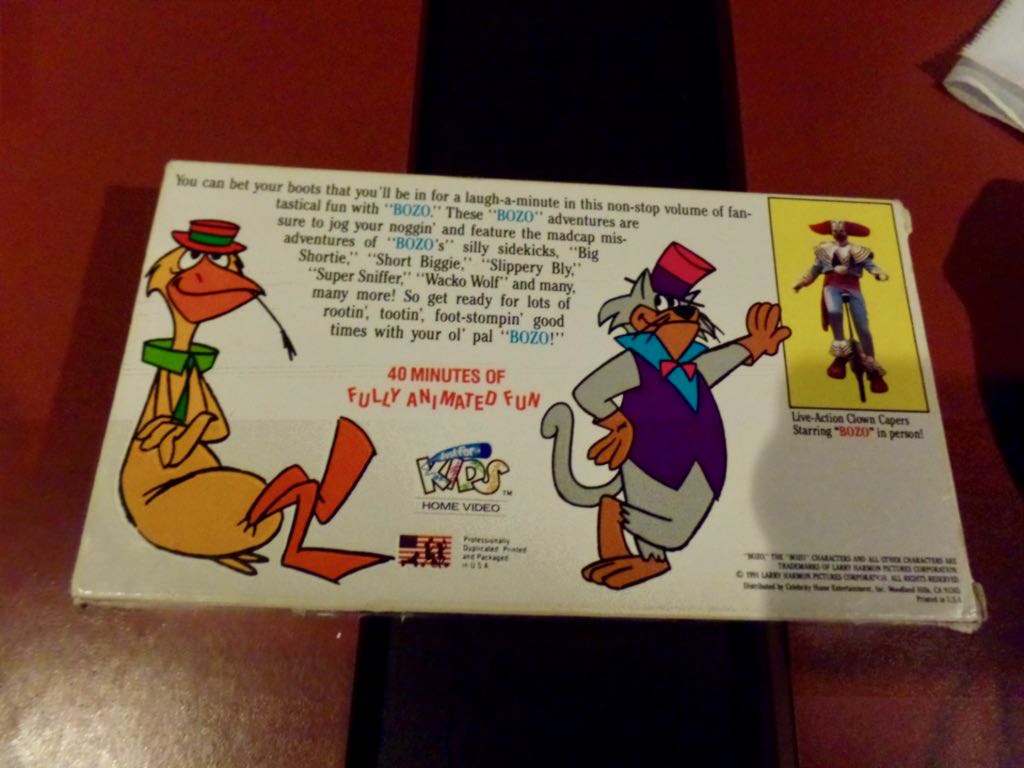 The back of that Bozo the Clown VHS promises 40 minutes of fully animated fun, and that it's laugh-a-minute. So, 40 laughs seems pretty good. I'm sure ``Wacko Wolf'' is a great character. 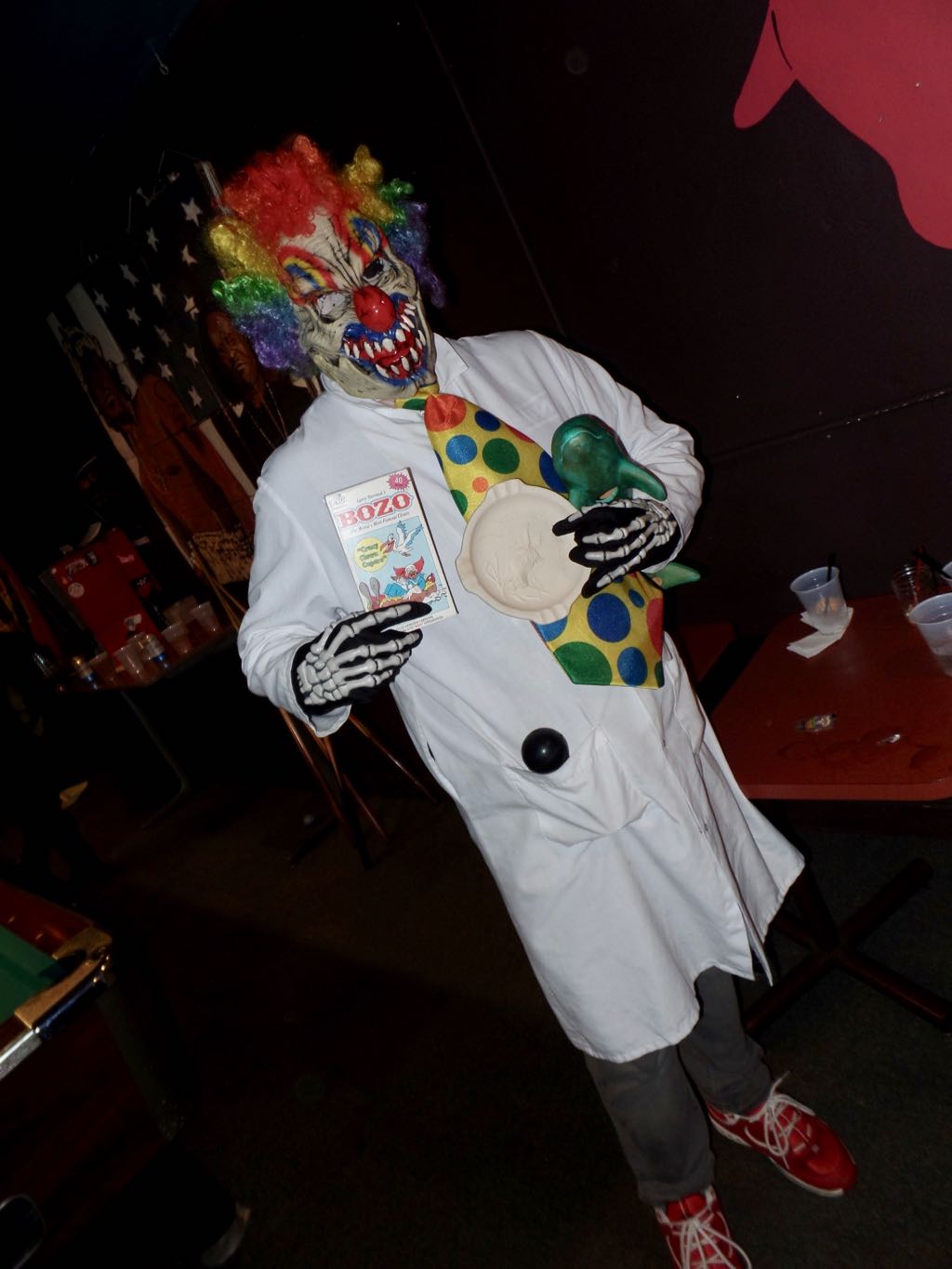 MWS shows off his prizes. 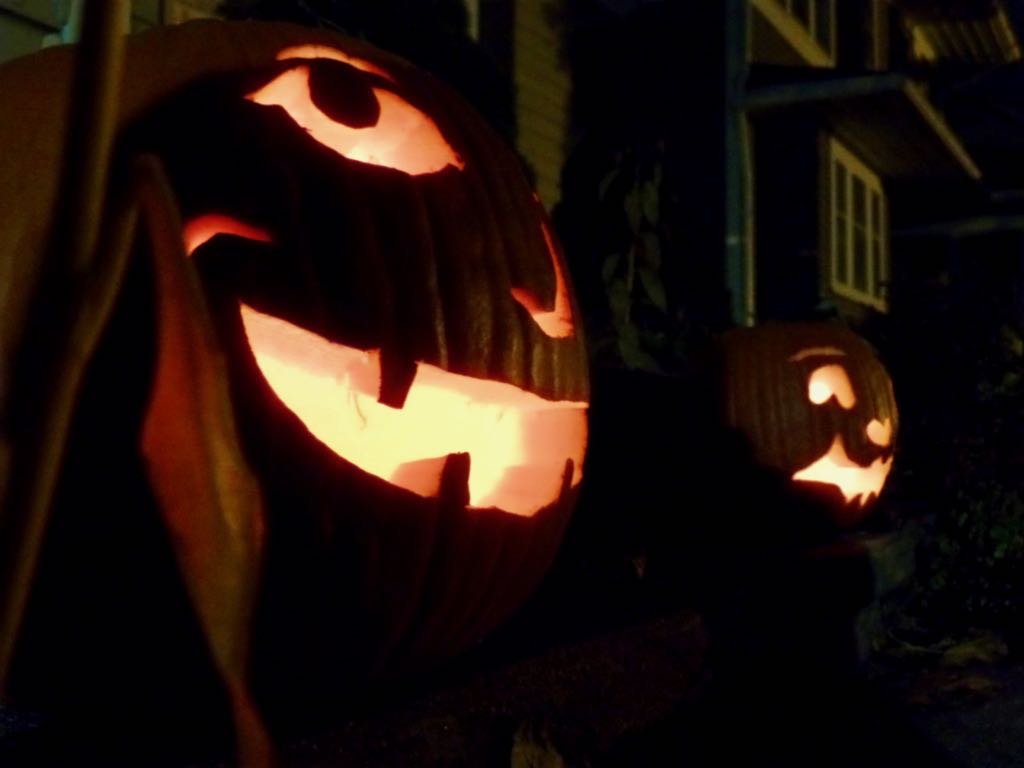 And here's our jack-o-lanterns sitting up on our front porch. 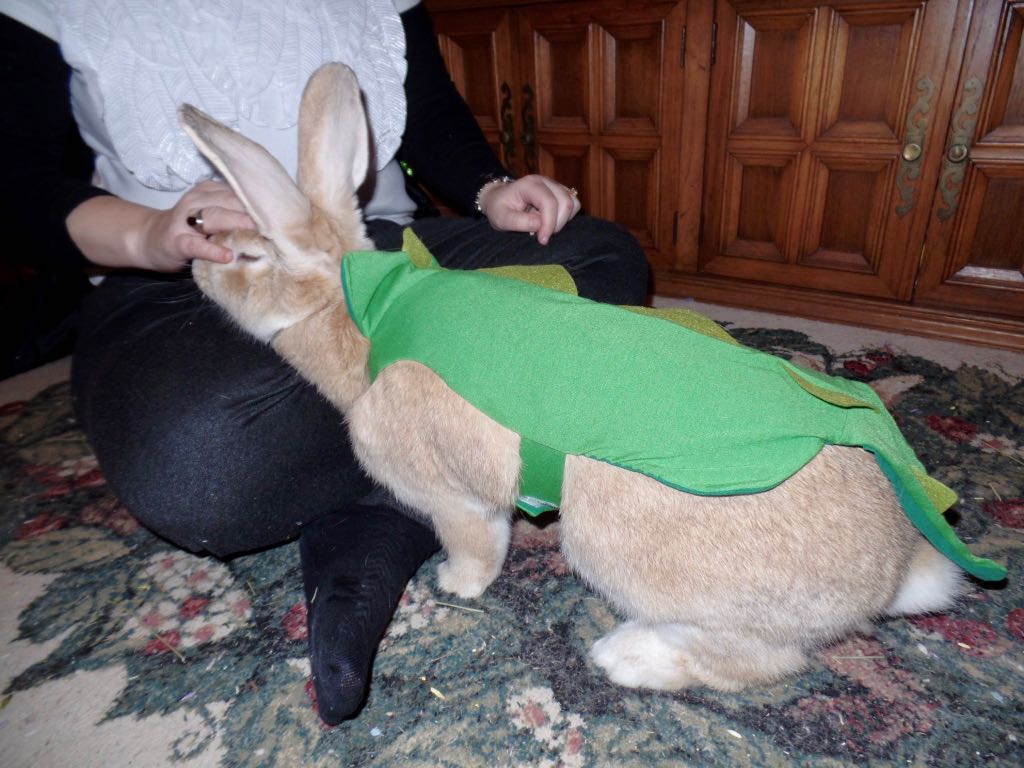 Some more photographs of our rabbit in dragon costume. Here, she tries to mind-meld her way out of it. 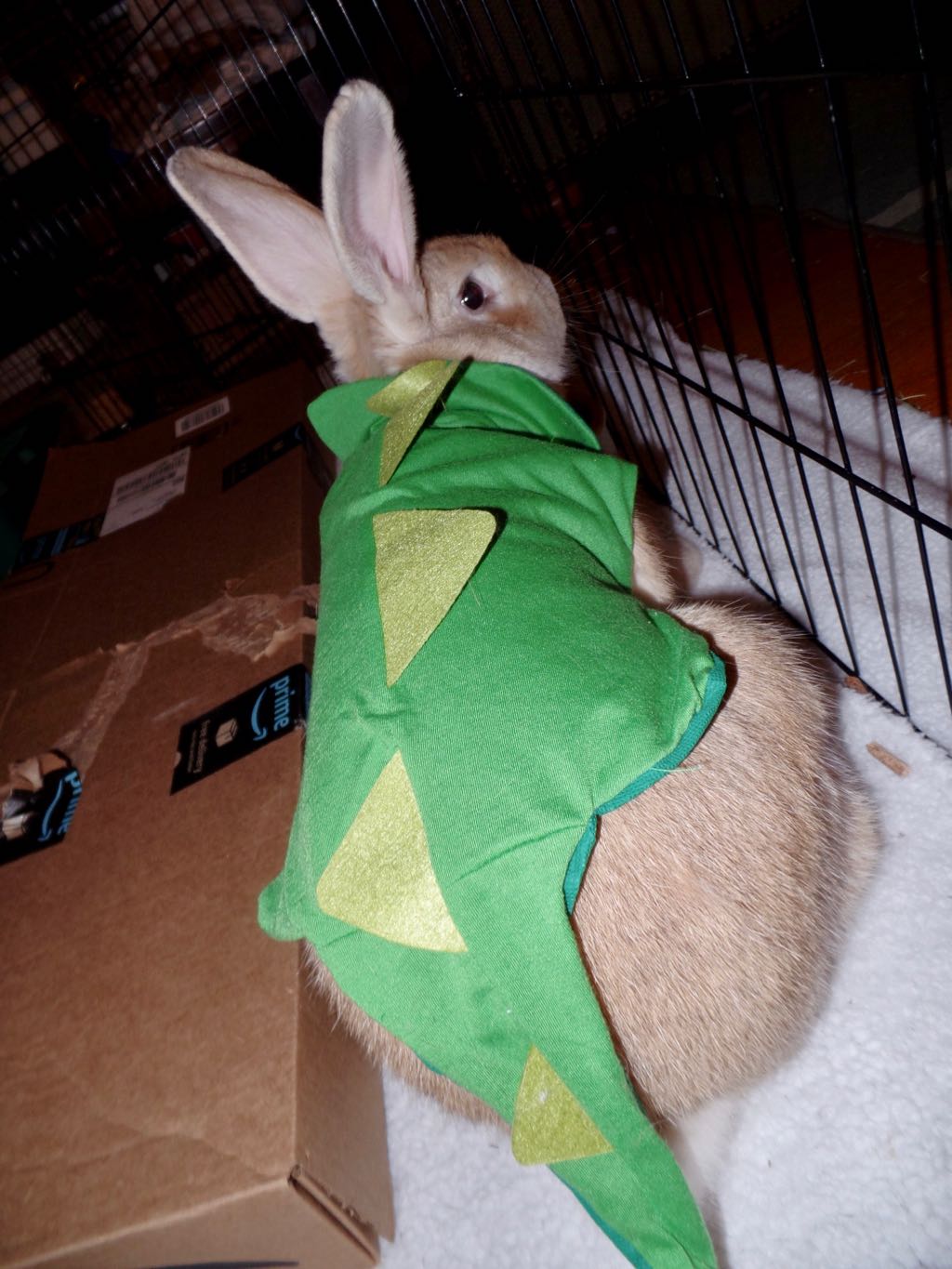 Here she shows off a dragonbunny rump. 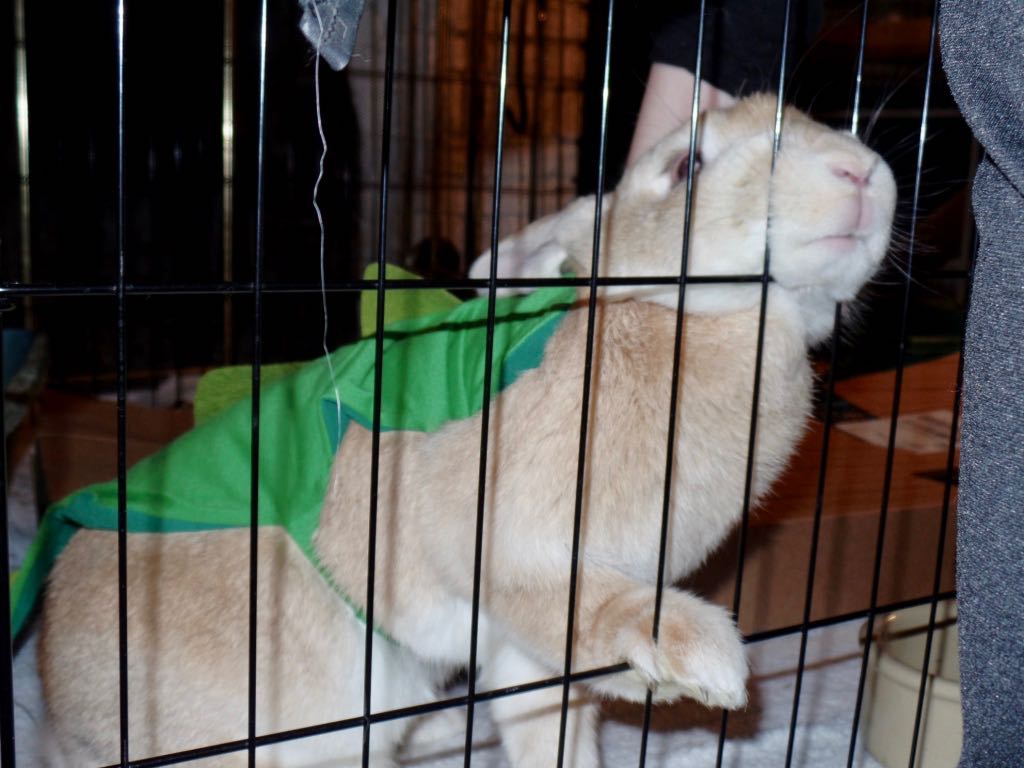 And here, dragonbunny asks politely if we're just going to leave her in costume all night. (We only left her in costume for a few minutes. She didn't seem distressed by it, but we'd rather have her patience for things being strapped around her, like we might need if we have to harness and leash her, not worn down by trivial stuff.)

Currently Reading: Death at the Excelsior and other stories, PG Wodehouse. The title story is weird; it's a legitimate locked-room mystery and I have the feeling that I'd be chuckling more about it if I were better-versed in the kinds of mysteries Wodehouse is clearly parodying. Like, I know maybe four Sherlock Holmes stories but I recognize bits that are clearly riffing on them, the one that comes across most clearly being the senior detective explaining how he solved most mysteries by remembering that unlikely stuff usually doesn't happen, so stop fretting about that.