I heat up, I can't cool down

We finally started preparing our pond to reintroduce the goldfish. The first step: pouring in the algae killer and then, a couple hours later, vacuuming out the pond. This we did with no particular difficulty, other than the slight protest of one of the at-least-three goldfish that wintered over outside.

Today we tried to dose the pond with praziquantel, which should knock out any flukes out there. It's maybe not necessary but after losing two goldfish to it, why take the risk? Well, the bottle sent to us had it in powder form, directing us to use, for a pond our size, 13 grams or equivalently four tablespoons and one teaspoon. Four tablespoons and one teaspoon turned out to be the whole bottle, or 25 grams, and there's no explanation for the discrepancy. Also, since the bottle was suposed to treat a pond twice the size of ours ... had we just way overkilled the flukes and maybe threatened our goldfish?

There's suspiciously little about praziquantel overdosing online. I called the pet store and, after a consultation, they recommended doing a 25% water change and watching to see how the fish looked after three days. If they seemed lethargic or to be having trouble breathing, then do another 25% water change. This is annoying, not least since a 25% water change is 325 good gallons of aquifer water, but that's better than having the fish at excessive risk. Still want to know how the praziquantel bottle got the amounts so far off. Being a little bit off is fine, maybe the medicine compacted in shipment more than they anticipated. But getting the packing fraction wrong by a factor of two is just not right. Plus it's caused us to worry we're poisoning our fish, and forced another week's delay in putting our goldfish back outside.

On the bright side, it turns out we have baby red squirrels in the yard. They're so small and young they don't even know to holler at me all day and night.

Let's have some more Cedar Point Halloweekends 2018. From the first night of our visit and when we were worried what else might disappear from the Coliseum. 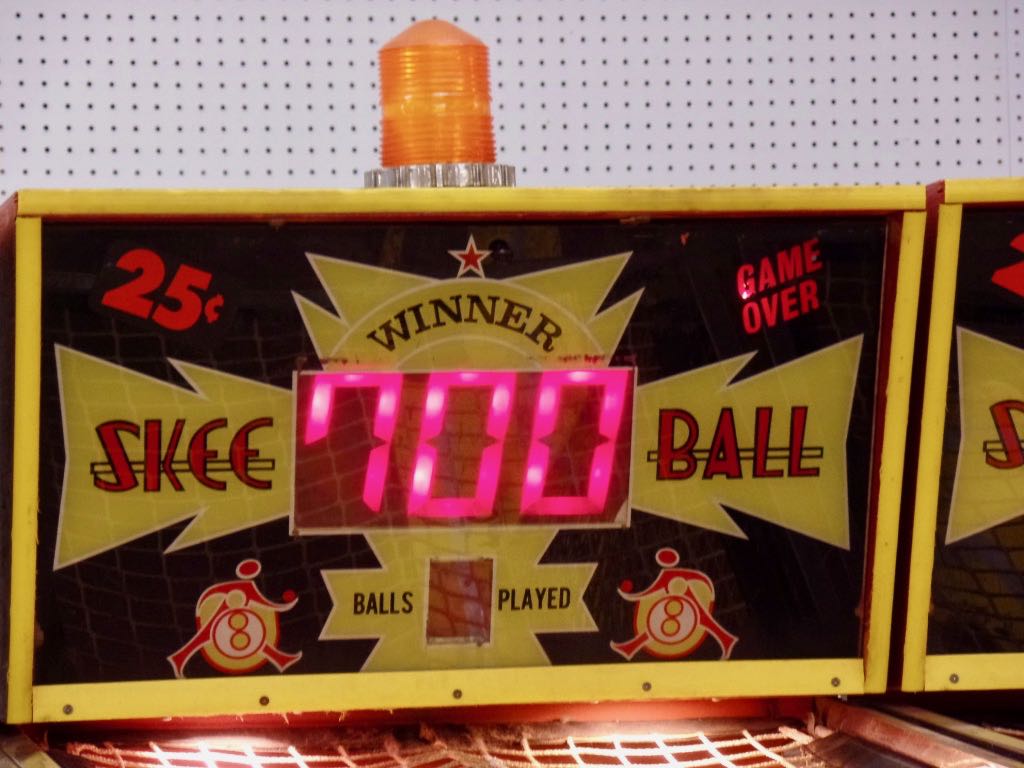 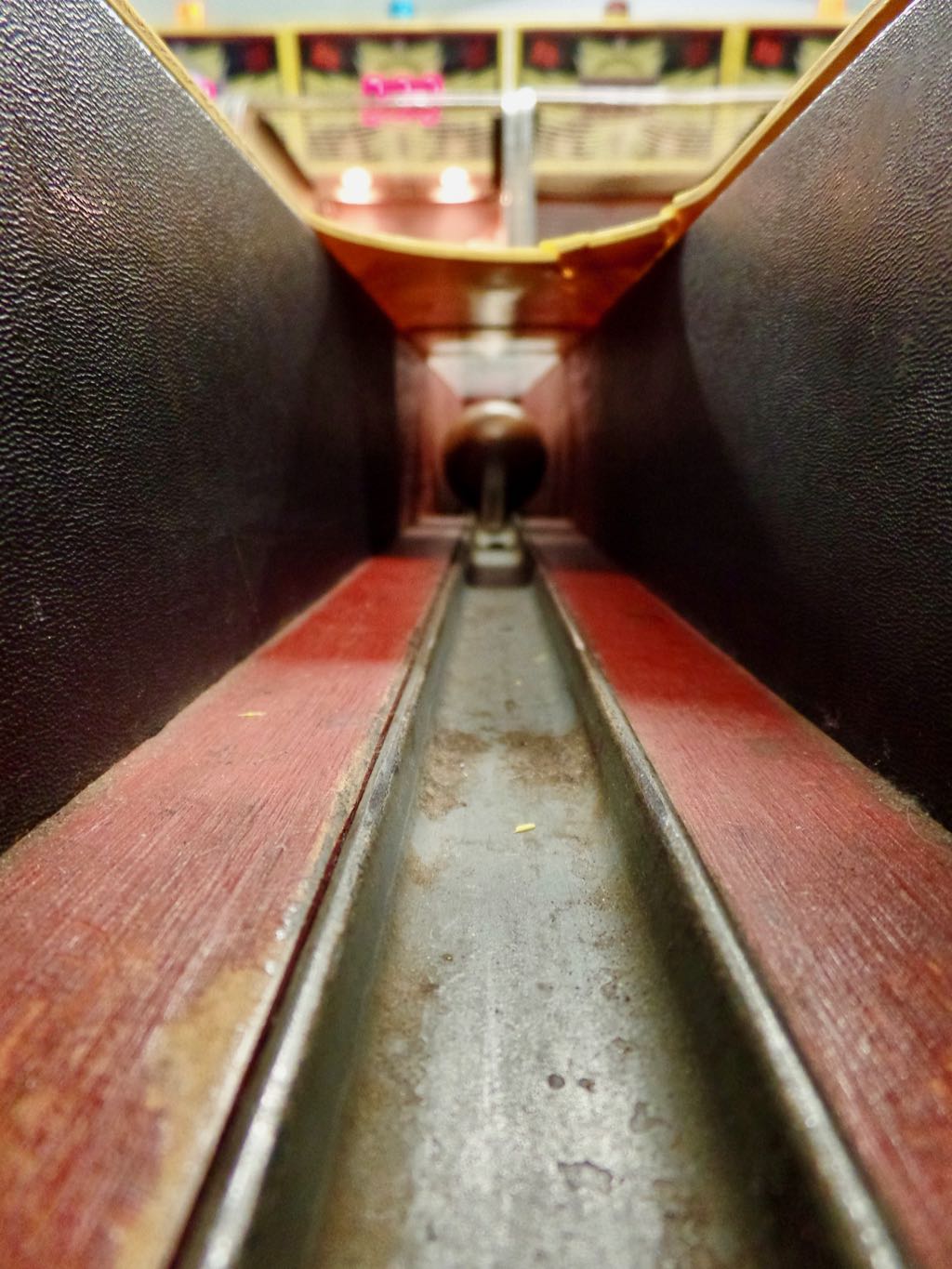 Looking from the ball lane inside the Skee-Ball machine. Another good album cover, here. 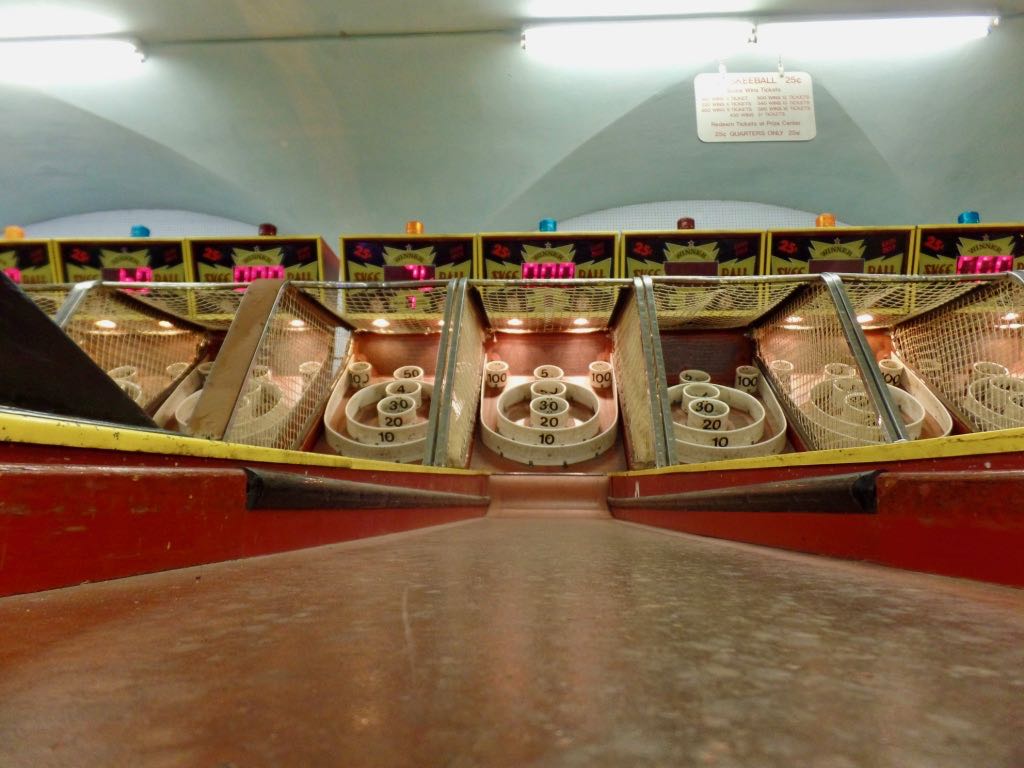 And here's the lane for one of the Skee-Ball machines. Note that this model is late enough to have the 100-point targets on the left and right. 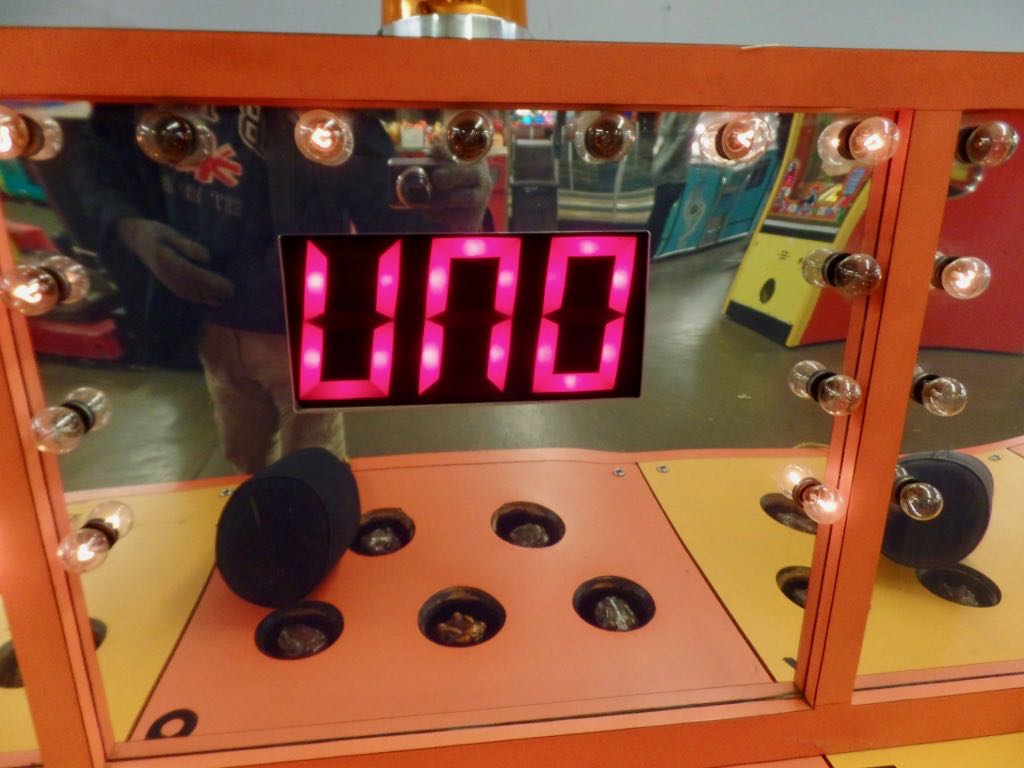 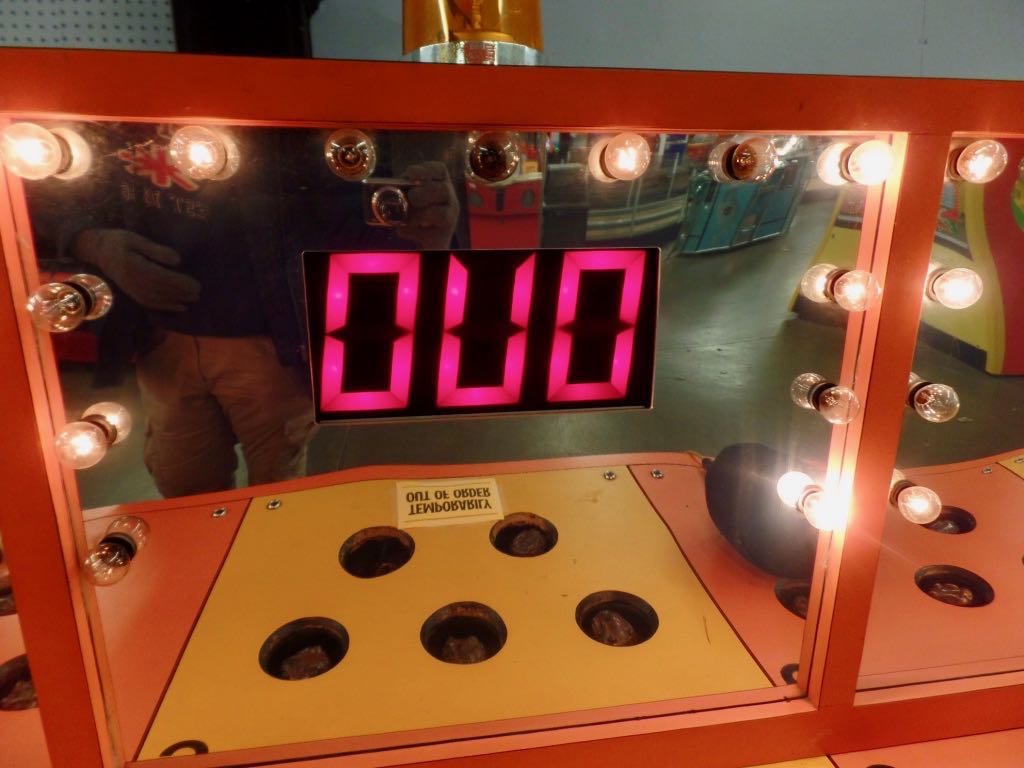 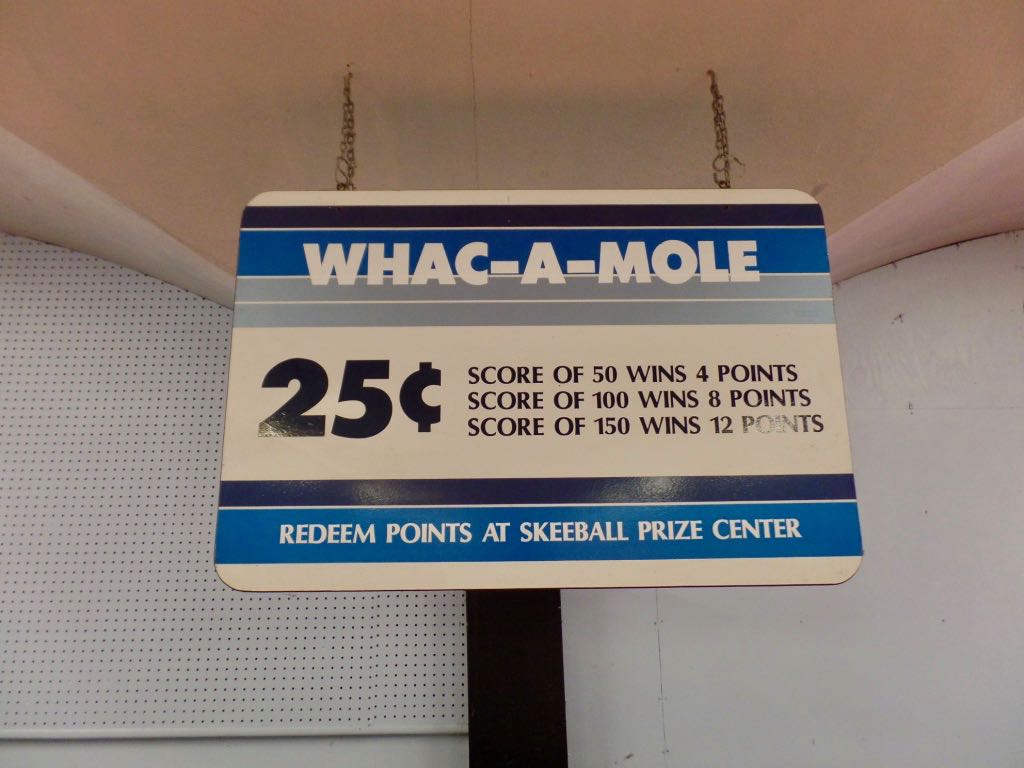 I suppose the Whac-a-Mole and the Skee-Ball awards are roughly comparable in difficulty level. Whac-a-Mole is harder to find a machine that works, though. 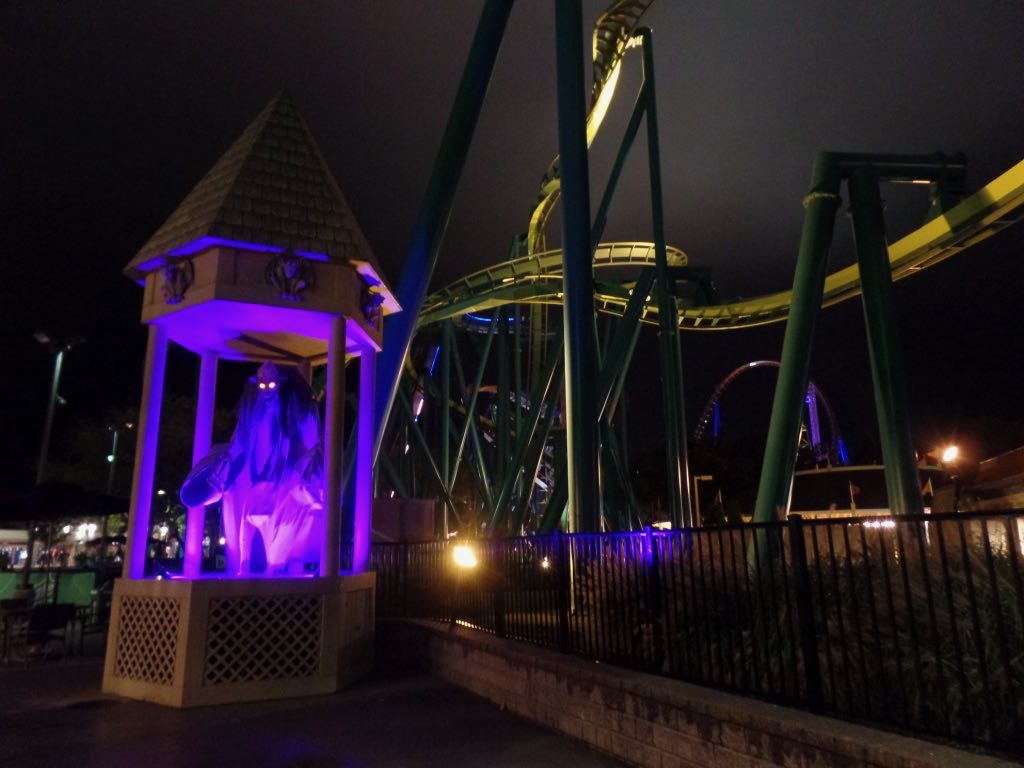 Grumpy old wizard animatronic set up outside the Raptor ride. 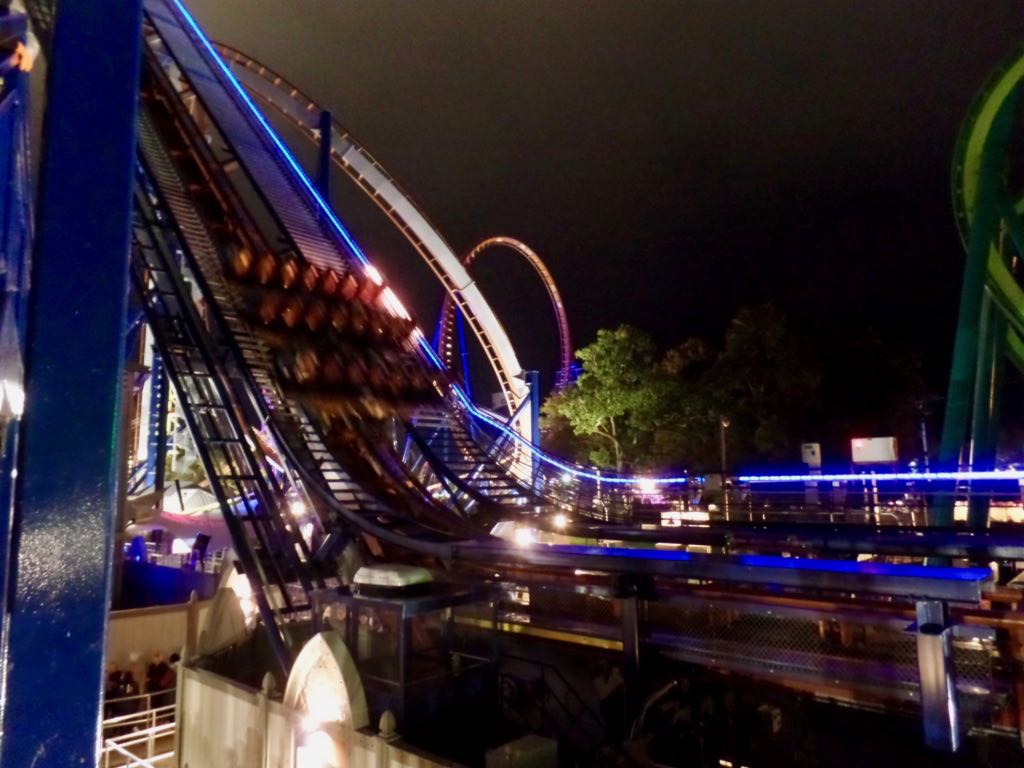 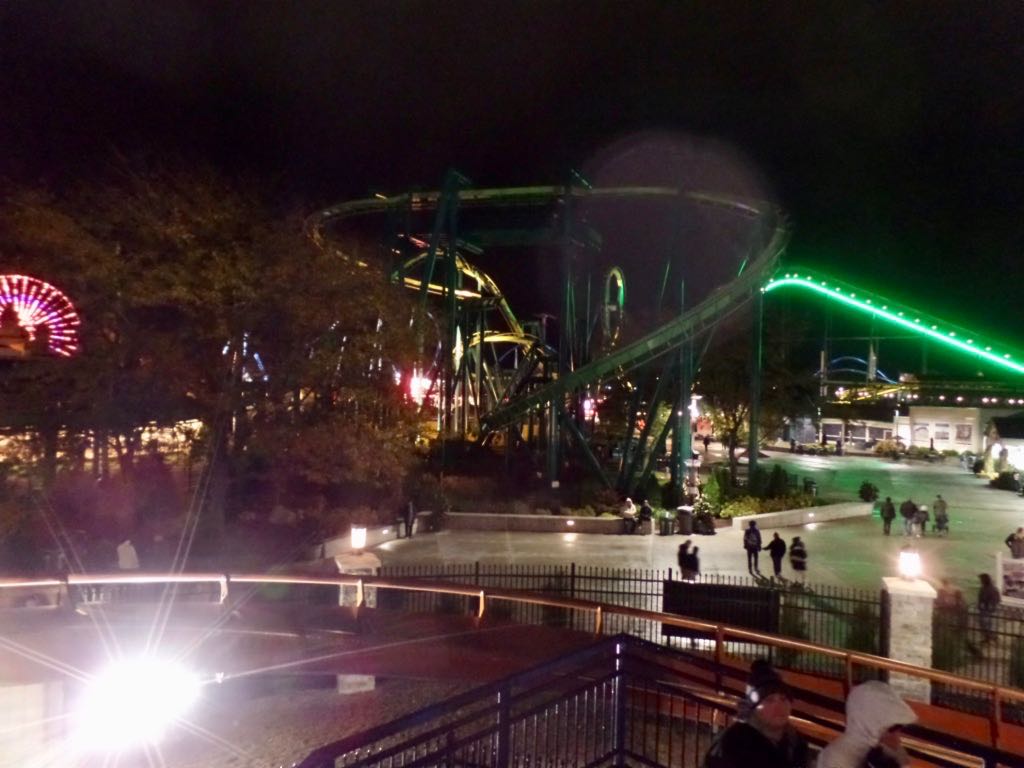 Looking out rom ValRavn on the Raptor roller coaster, and the rain-slicked night generally. 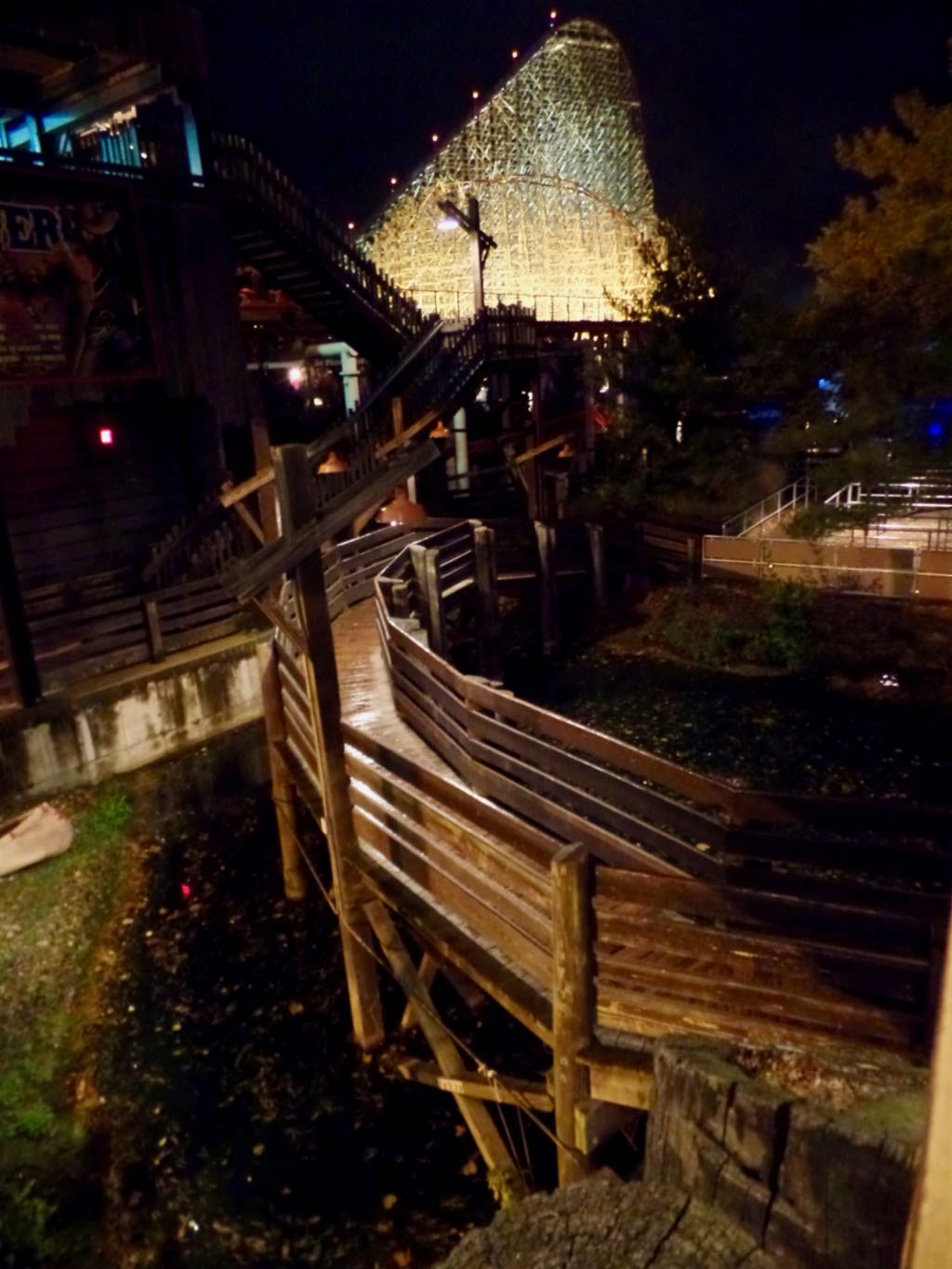 Entrance path for Maverick, which was our last roller coaster of the night. Steel Vengeance stands tall in the background. 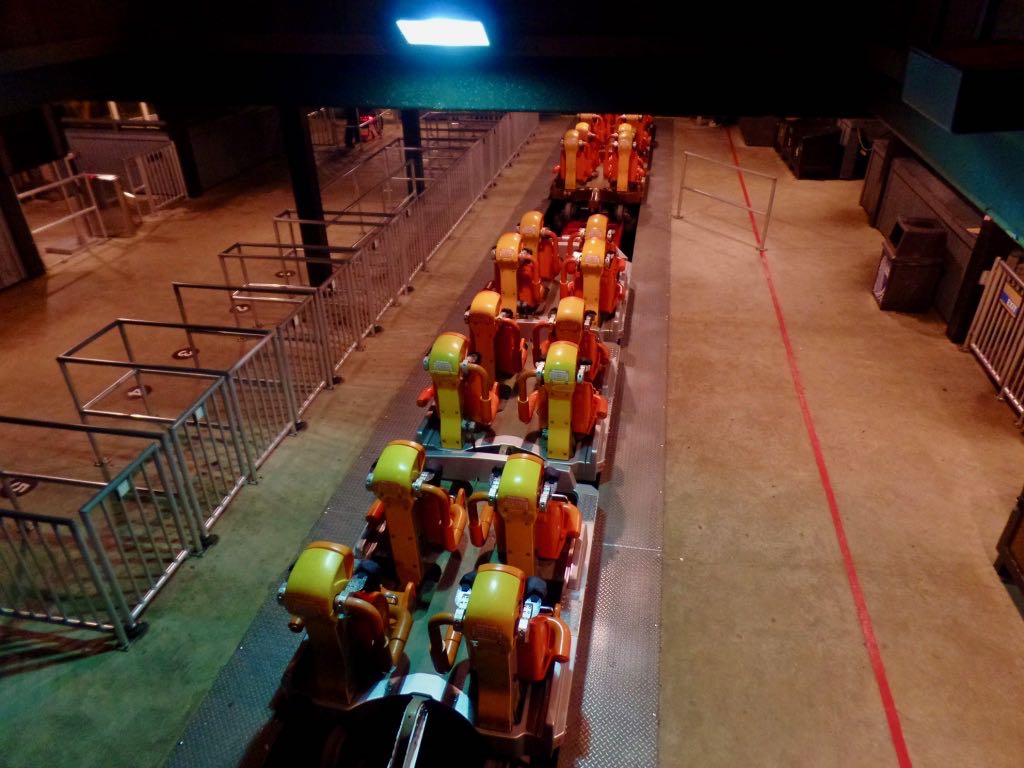 Maverick's trains being put to bed for the night. The exit path goes over the launch station, which is why this works. The load two trains at once, but dispatch them one at a time. 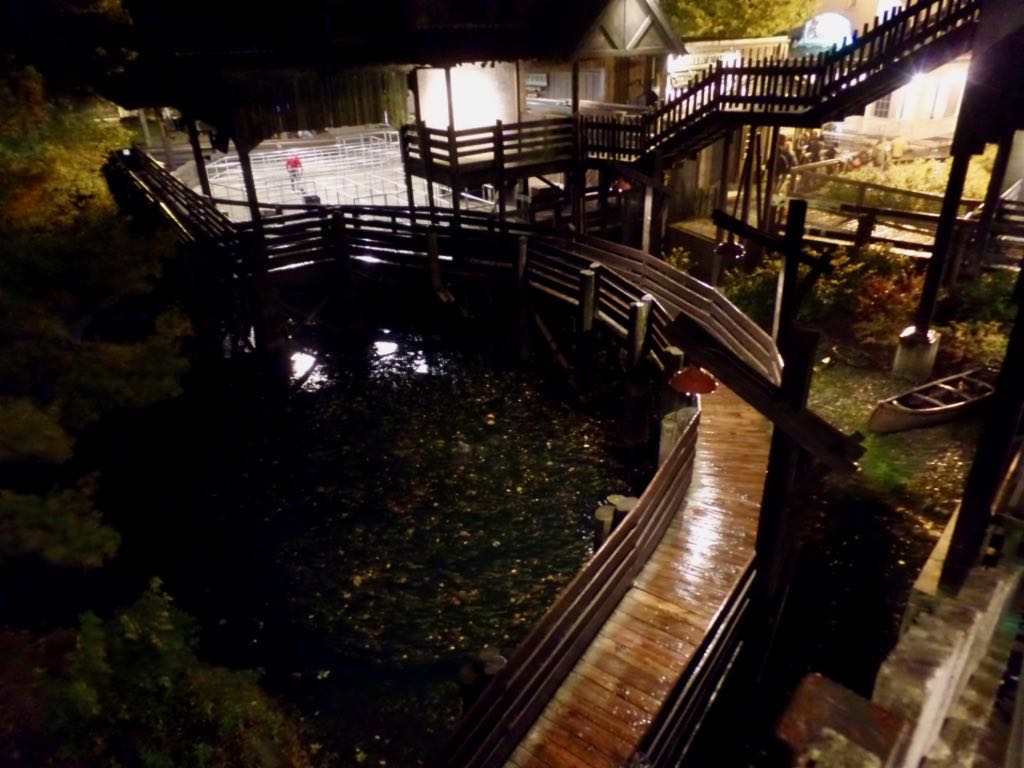 The rest of Maverick's entrance path and many of the switchbacks for its queue, which is reliably an hour or more long. 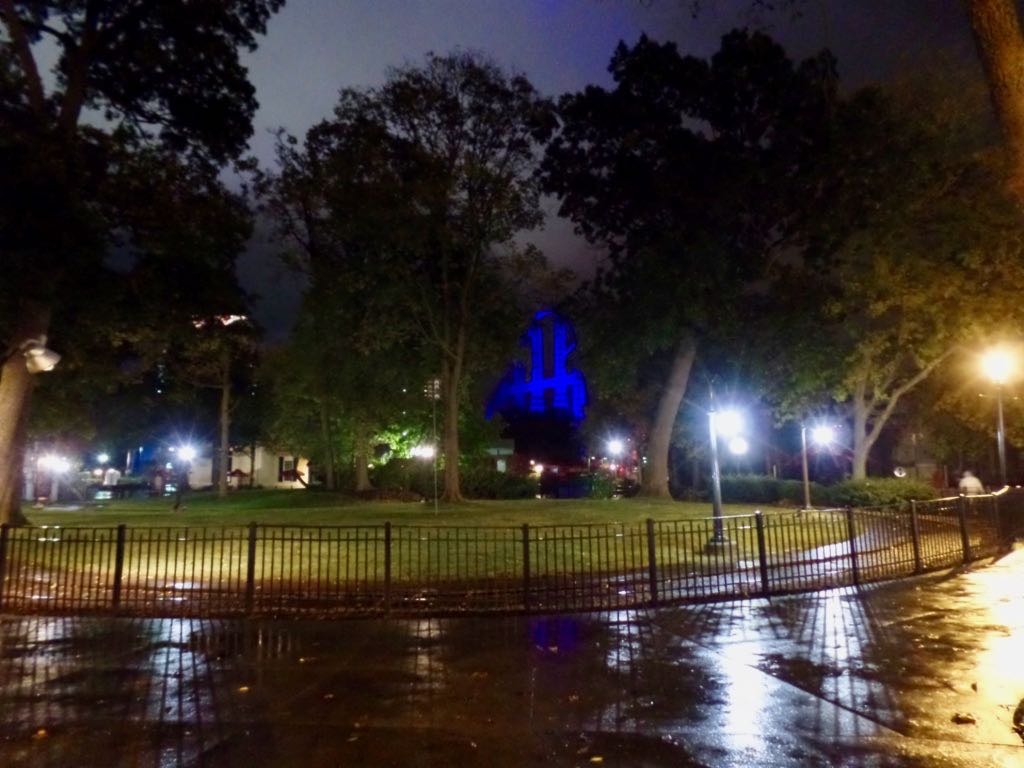 Walking back through the rain-slicked park. Here through the trees we get a view of Millennium Force, the great blue structure in the far background. 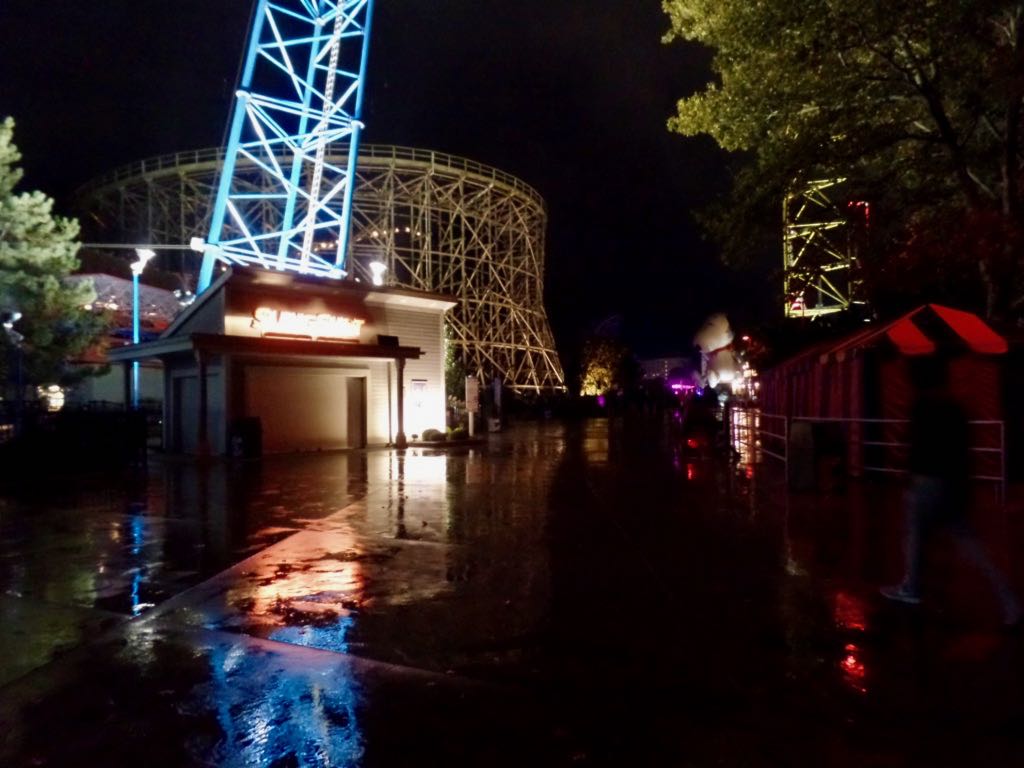 Slingshot, an upcharge attraction, plus the Gemini roller coaster seen in the night and in the puddles. I think it was just starting to drizzle here.

Trivia: The Hyatt chain opened its first airport hotel in 1954 at Los Angels International; it was a ranch-style, with palm-fringed patio and swimming pool. Source: Naked Airport: A Cultural History of the World's Most Revolutionary Structure, Alastair Gordon.