Cedar Point's announced its plans for a reopening fiasco. (I assume Kings Island, also in Ohio, is using the same plans.) Reduced capacity, as anyone would have guessed. In fact, even season pass holders have to buy a day's reservation. Health declaration given over their app, and a temperature screening before entering the park. Social distancing ``markings and signage'' and who knows what that'll do to the queues. Face masks required at all times, which as

bunny_hugger notes, will be very interesting on Top Thrill Dragster, the roller coaster that goes 120 miles per hour.

A certain kind of person --- let's dig deep in the barrel of euphemisms and call them ``big whiny crybabies unable to imagine not wanting other people pointlessly killed'' --- is Very Upset about this mask requirement. Apparently they're making promises not to go to Cedar Point if they have to wear a mask all day. Which, you know, great: these are the people who should not go out in public. But they're bluffing, unfortunately, and they'll go and they'll be so annoying to deal with that park employees will give up.

Cedar Point plans to have season passholder-only days the 9th and 10th of July, to open the weird season. As a fan of systems-struggling-through-the-chaos I am really interested to see this. I'm almost offended by how much I want to see how big a fiasco this is and, actually, how well it works through the craziness. I doubt that it's safe, or wise, though. Maybe, if things get better, we can go in August, or more likely September. I just don't feel good about this, not right now.

The Merry-Go-Round Museum announced a similar plan, requiring face coverings and putting direction arrows through the museum. Big whiny crybabies unable to imagine not wanting other people pointlessly killed are apparently Very Upset about this, too. But they hope to reopen ... well, the 11th. Anyway, here's some pictures from our October 2018 visit, a pleasant time as always. 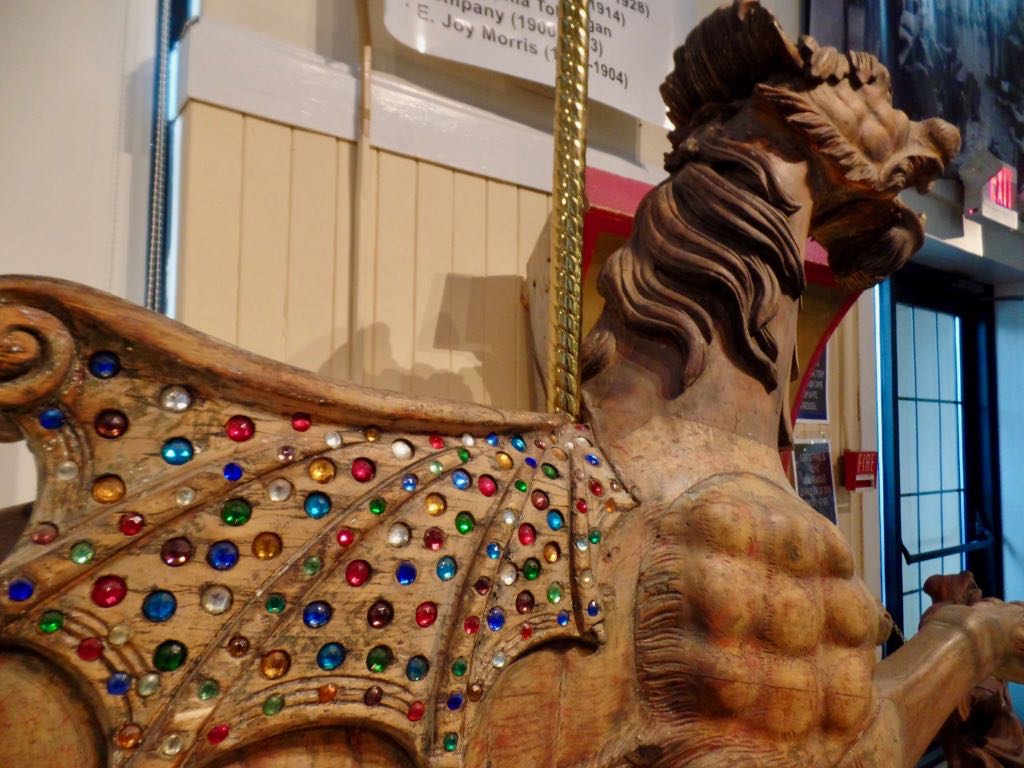 Charles Carmel-carved sea monster, from 1905, and festooned with jewels by one M D Borelli. I know what you're thinking: isn't that the same model sea serpent seen on the Michigan's Adventure carousel? No, it's not; look at the wings more closely. Next time we get to Michigan's Adventure I'll try to take a picture from a roughly similar pose, and then I'll forget to do anything with the picture. 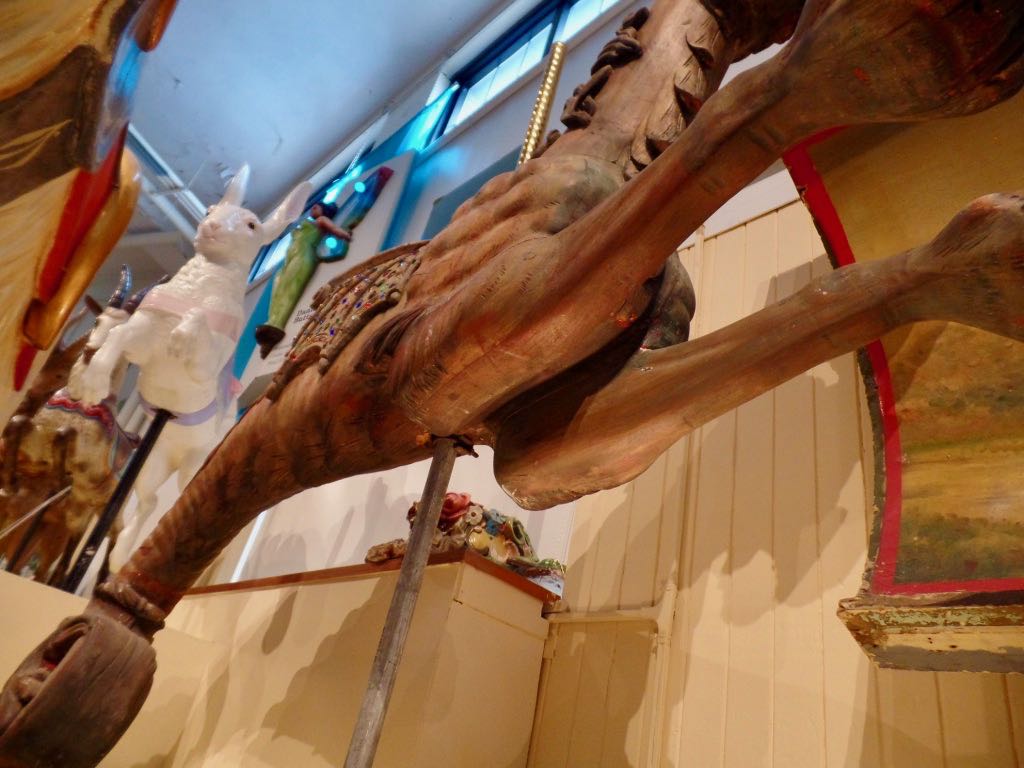 Looking up at the sea monster. In the background is a 1910 Dentzel jumping rabbit. 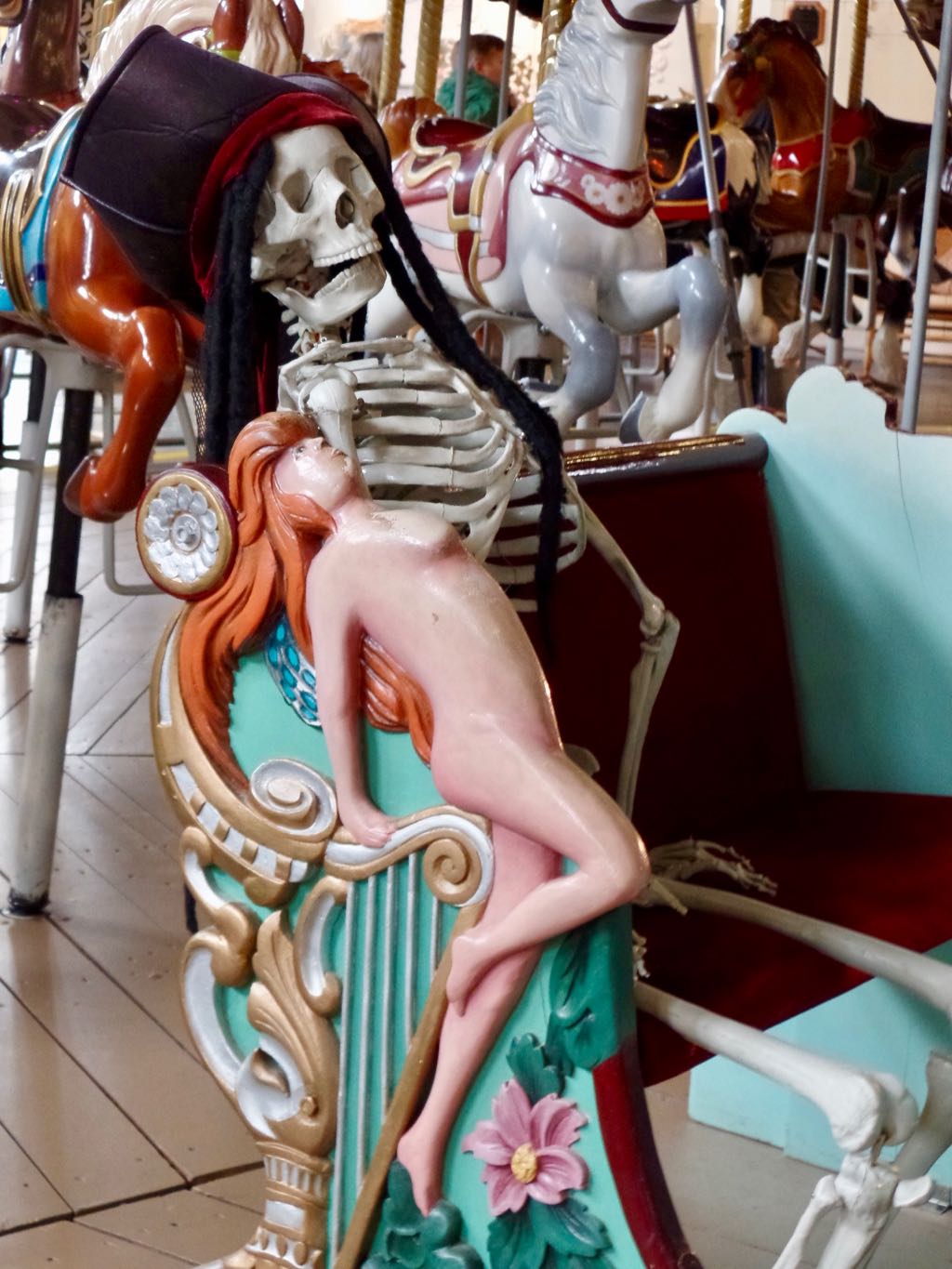 The Merry-Go-Round Museum has its own carousel, an antique mechanism with mounts either on loan or that they've carved themselves. Here's their chariot, with a seasonal decoration sitting right next to the naked harp lady. 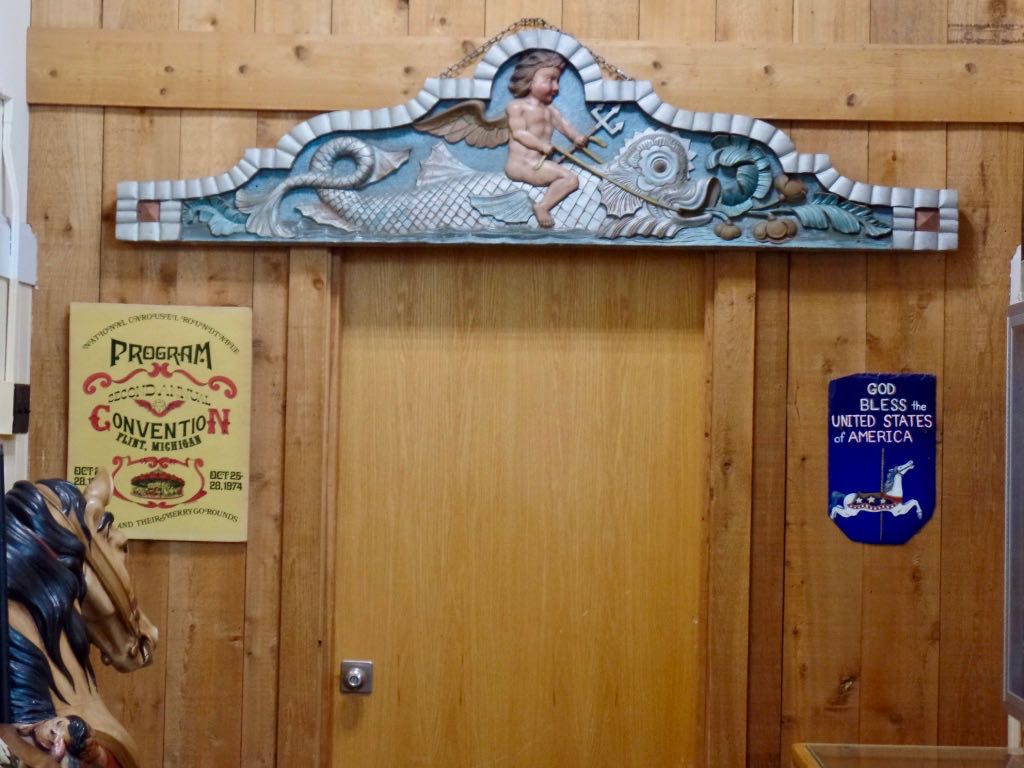 King Triton, I suppose, riding a fish in what had once been the rounding boards atop a carousel. This is the private-events door again. Note the poster for the National Carousel Association's second-annual convention, held in Flint a week and a half before 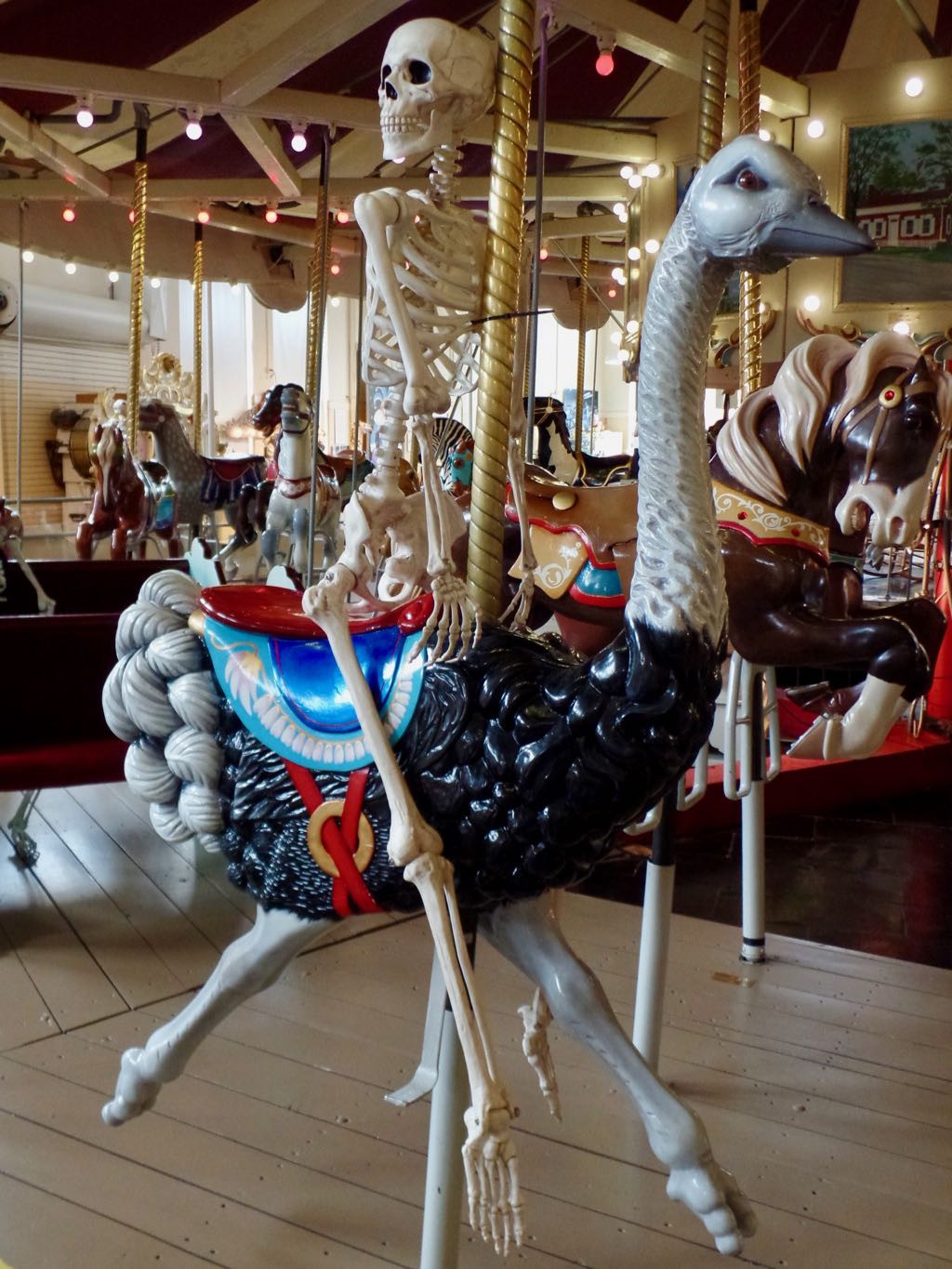 Skeleton riding the museum's ostrich. Seems like an over-dramatic way to keep riders from getting on the ostrich, but it is classier than a ``Do not ride this animal'' saddle cover. 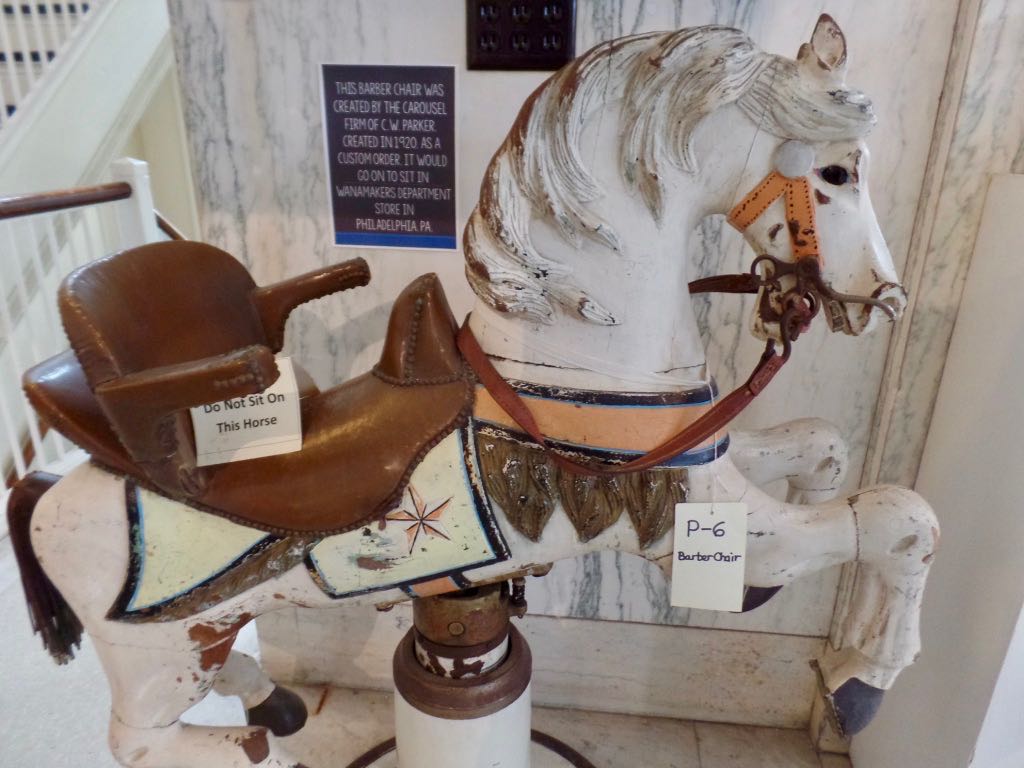 Children's barber chair from the Wanamaker's in Philadelphia, from back when the barbers needed kids to be hopping up and down all the time. 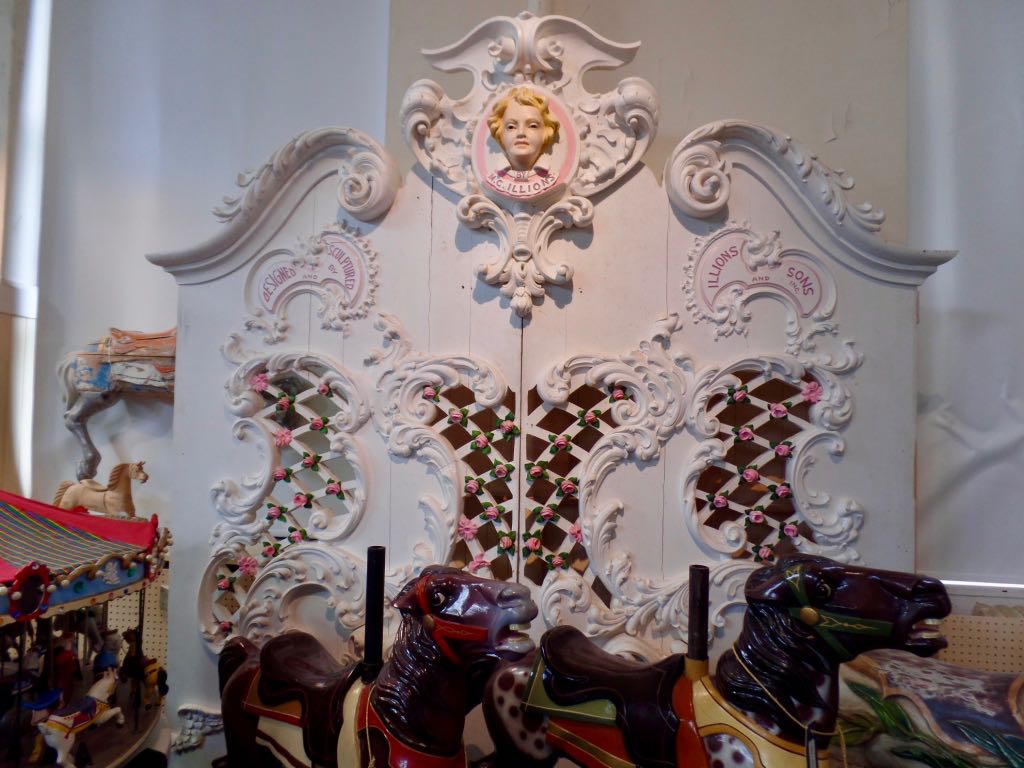 M C Ilions decorative panels. I believe there's like four more of these, in storage, because already this reaches like twelve feet side to side. 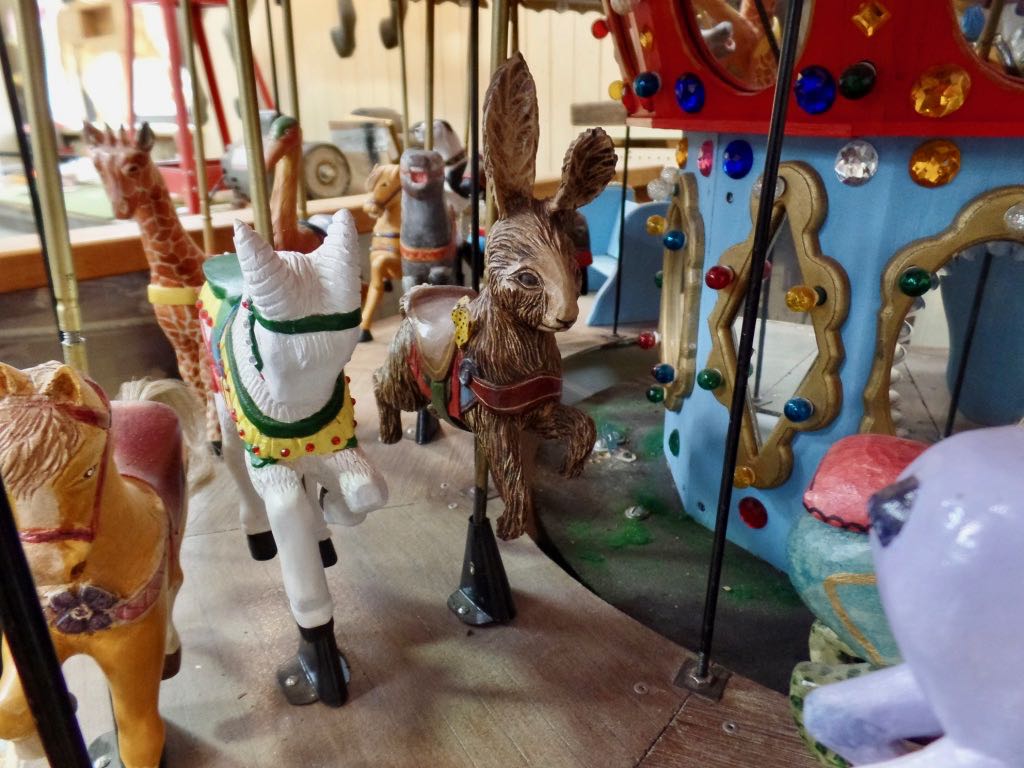 There are a couple miniature carousels. Here's one with a tiny goat and bunny that wasn't yet stored to working condition in 2018 and I don't think it was running when we were there in 2019. I think the lighting had been repaired, though. 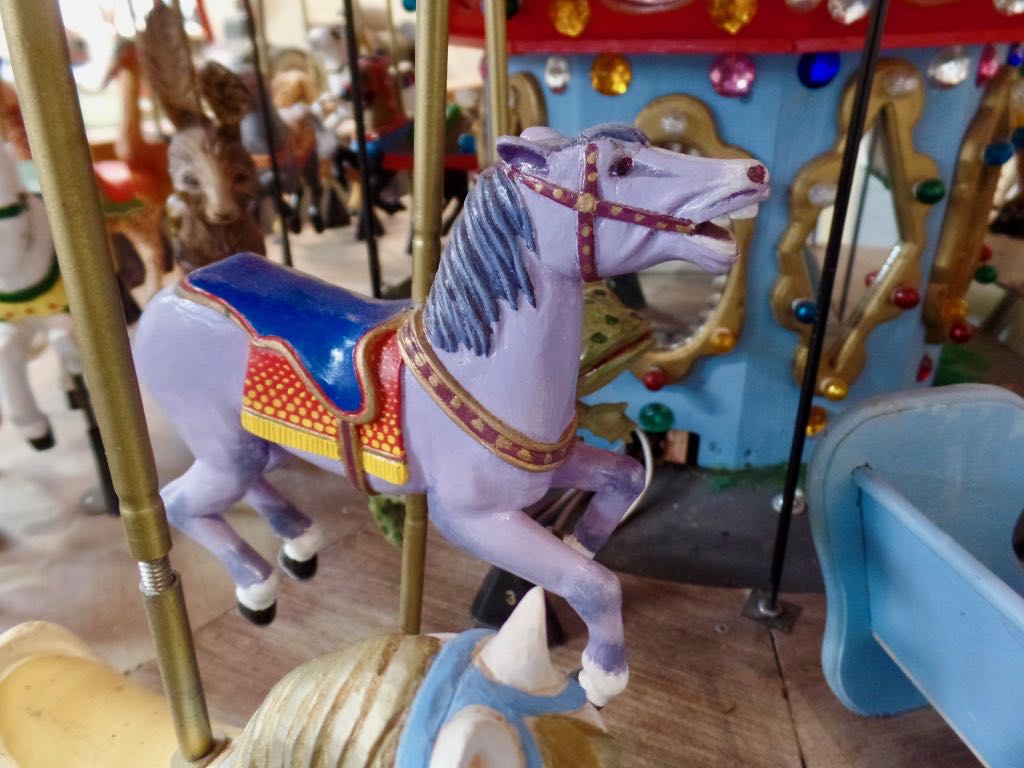 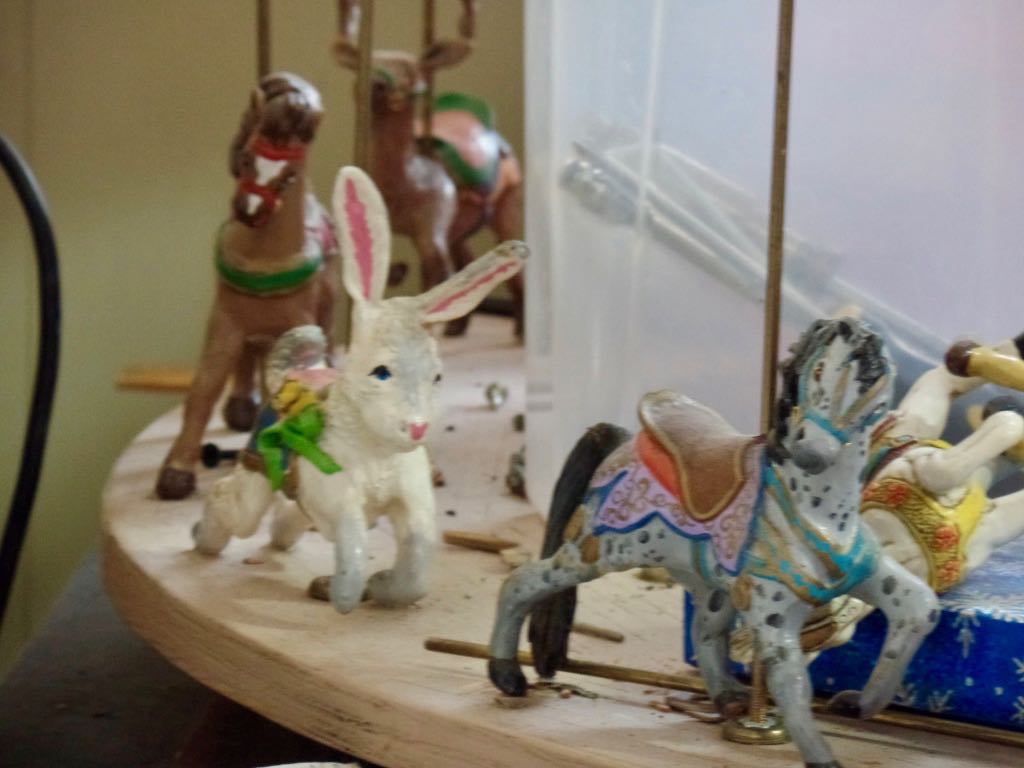 Different tiny bunny and horse on another miniature carousel. 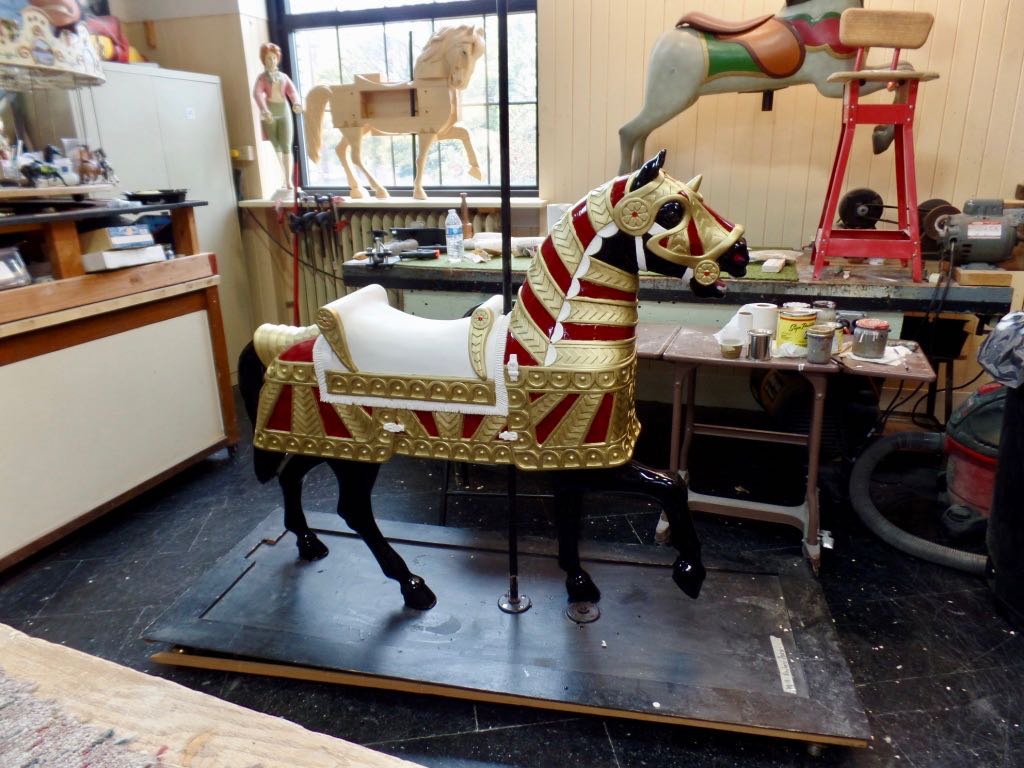 And here's the 2018 raffle horse, being carved. I don't think this was tied to a specific holiday, which made a break from routine for the museum. 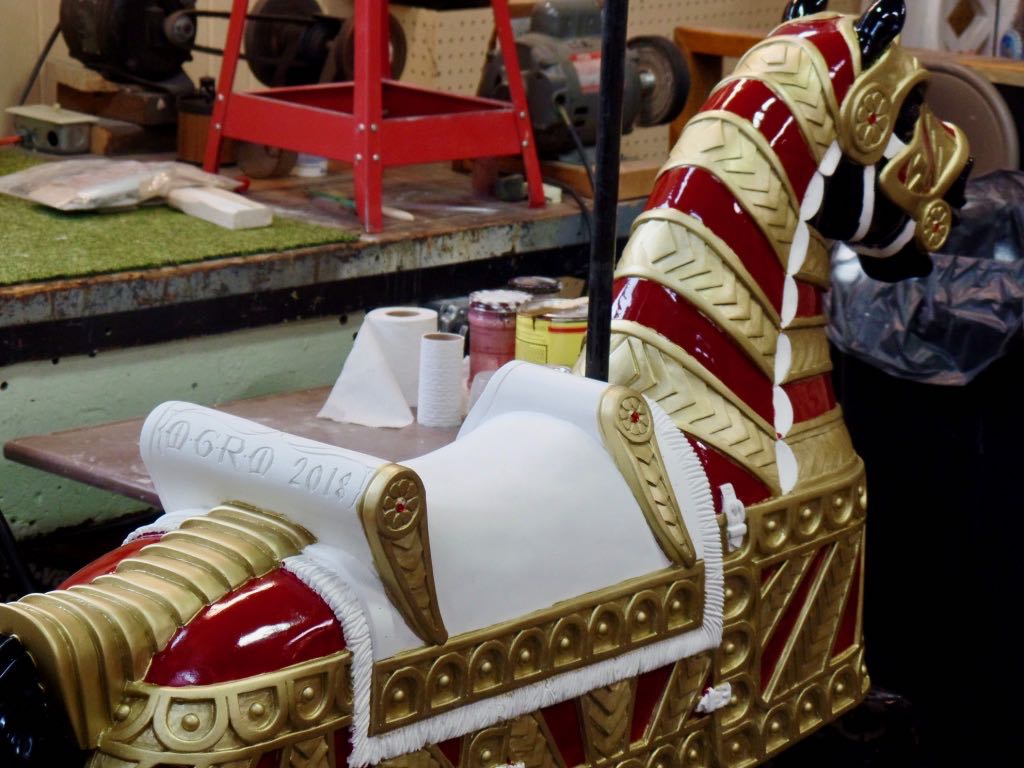 The saddle of the raffle horses carries the museum's initials and the date. They also include markings inside the mount so that nobody doing restoration work on one in the future should be mistaken into thinking it's older than it actually is. 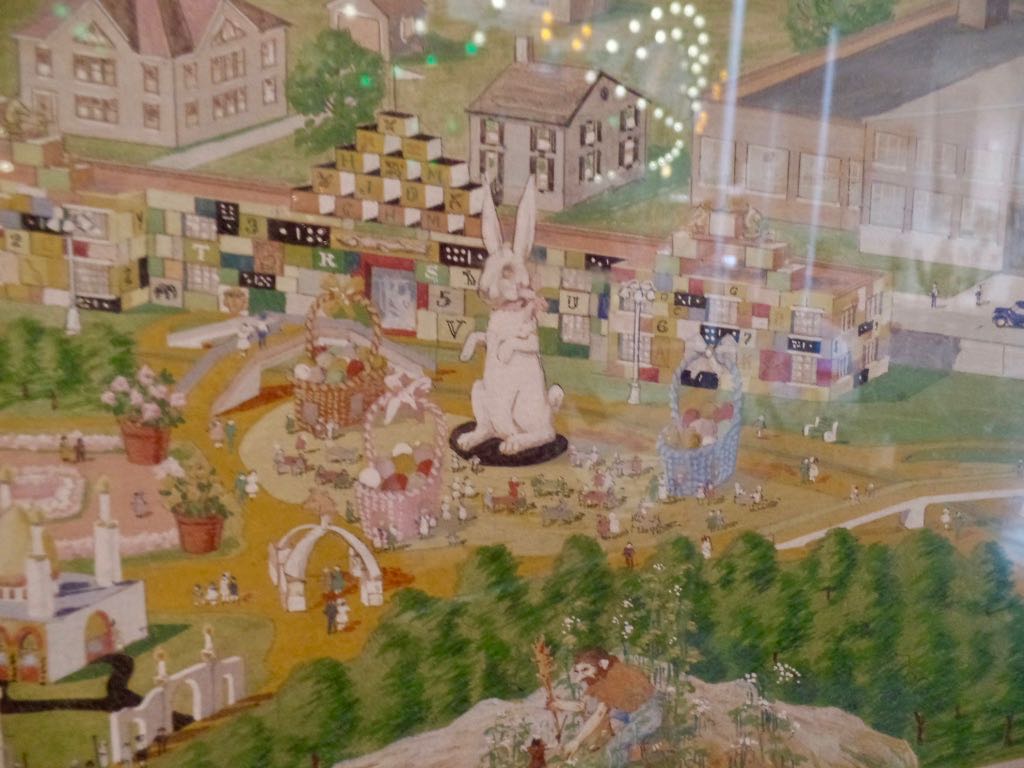 Easterland! The museum has a strange, enormous poster showing a hypothetical amusement park, Toy Town, that we keep watching and keep finding fascinating and know nothing about. I know I share pictures of this, and details of it, every year but it's just endlessly fascinating. 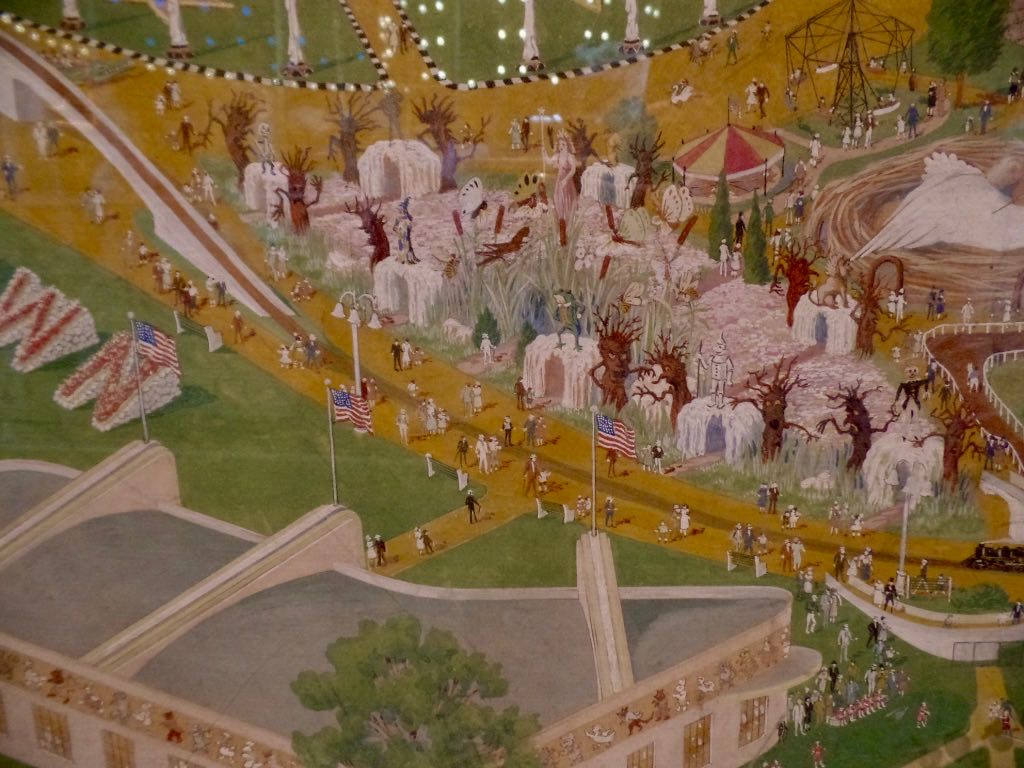 Here's the Wonderful Wizard of Oz-themed area for the park. You should be able to spot the Scarecrow, Tin Man, Cowardly Lion, and Glinda. I can make out Jack Pumpkinhead, H M Woggle-Bug (TE), and the Frogman of the Yips. So it gets into the later books too. 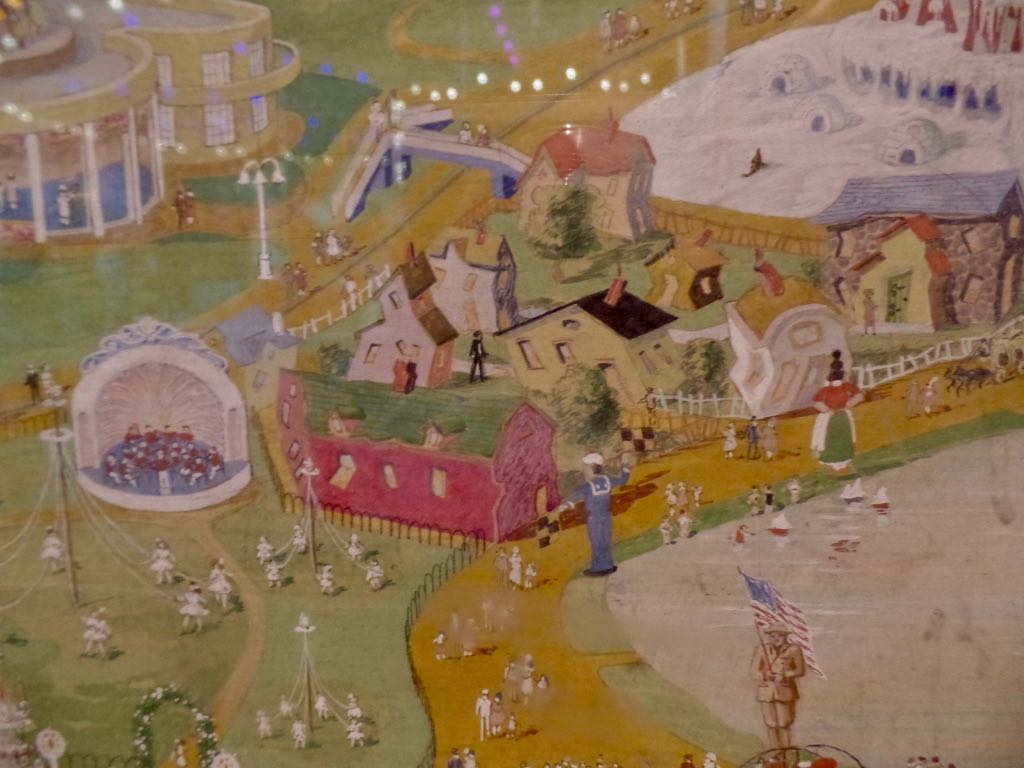 Looks like the Crooked Man has found a whole Crooked Neighborhood to move in to, right between the bandshell and Santa's Workshop. Good for him. ... Obviously this place was never built, but wouldn't it have been fantastic if it were? Even granting that it would have declined and been abandoned. It would make such a superlative ruin. 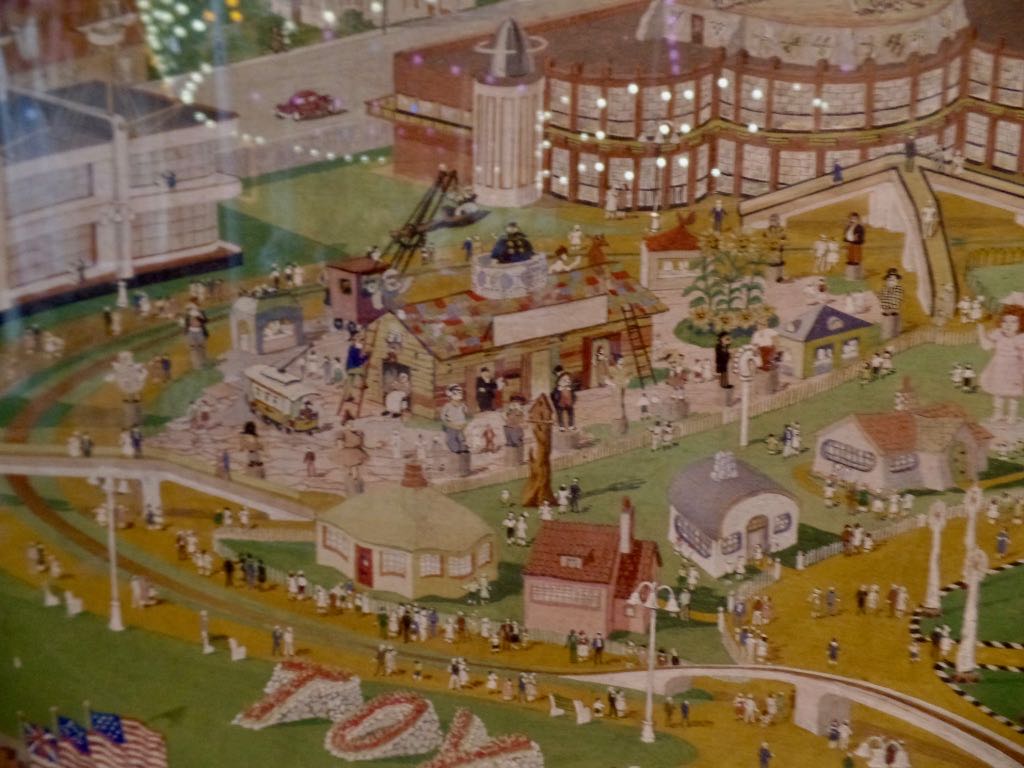 Upper corner of Toy Town, showing off some of the little houses and what seems to be a fanciful look-at-the-construction-equipment thing. Also some of the many, many stairs people could climb to get to the stairs leading back down. It does seem like Toy Town was a little short on rides and very well-stocked with walking paths that rise for little clear purpose. But look at the beauty of those curved buildings in the background; aren't they great? Sincerely.

Trivia: Kārlis Ulmanis, first provisional prime minister of Latvia in 1918, was a graduate of the University of Nebraska. Source: Paris 1919: Six Months that Changed the World, Margaret Macmillan. (There's a bit of a mess here. Macmillan specifically writes ``the provisional president of Latvia, an agricultural expert from the University of Nebraska'', without naming him. Which is all right since the point was something else. But. The provisional president, Jānis Čakste, did not go to Nebraska. The provisional prime minister, Ulmanis, did. Which person was the intended reference? Either is plausible and Macmillan doesn't clarify. Anyway, Ulmanis would serve several terms as prime minister and then, after a coup, president of Latvia.)

PS: Reading the Comics, June 6, 2020: Wrapping Up The Week Edition which does just what the title says.