Where it stops nobody knows

The National Baby Food Festival's cancelled for 2020. This is getting serious. While Pinball At The Zoo, in Kalamazoo, is the state's biggest event and the one that I always think I do well in without actually doing so, the Baby Food Festival is the second-biggest event and the one that actually does launch me into state finals.

The pinball tournament normally held at the Baby Food Festival might still happen. It's officially part of the Meijer State Games. Some of these events have been cancelled for the year, but as best I can tell there's no declaration about what the state of pinball is. Even if the event is held, though, a lot of what makes the Baby Food Festival's tournament so valuable, IFPA-wise, is that people attending the festival come in and play a few games, depositing their slight value as tournament players into a jackpot that us serious players take in. Even if the Games do happen, they might not be worth enough to help me get to a top-24 position and invite to the State Championship Series.

If there even is a State Championship Series for this year. It's now been longer without any sanctioned pinball than has been with, for 2020, and the International Flipper Pinball Association hasn't announced plans for that to change. Even if there is, I'm not convinced that it's safe. I think I wouldn't feel safe going to a tournament event before the state opens up arcades for socialization, at least, and maybe not even then if the daily infection rate remains too high. Sitting this year out might be the best thing for me.

Not sat out, technically: my humor blog. Here's what's run on it the past week.

Let's wrap up the Merry-Go-Round Museum and get back to Cedar Point, where I'll get wrapped up in something maybe better than the Town Hall Museum. You'll see. 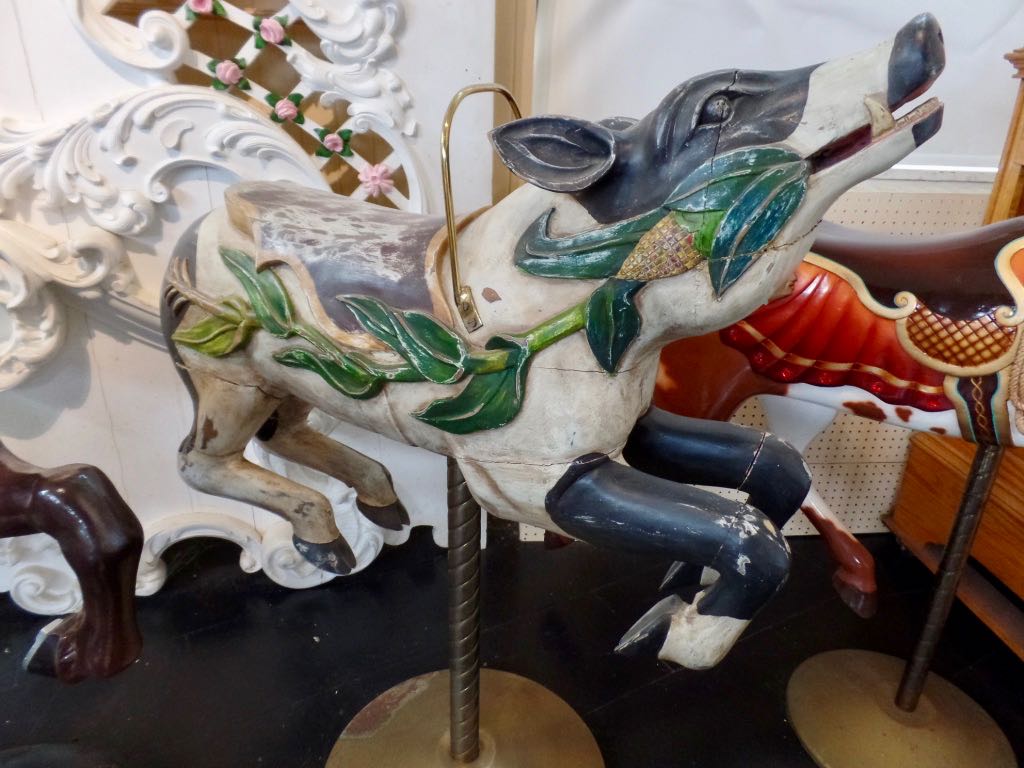 Carousel hog making off with some corn. 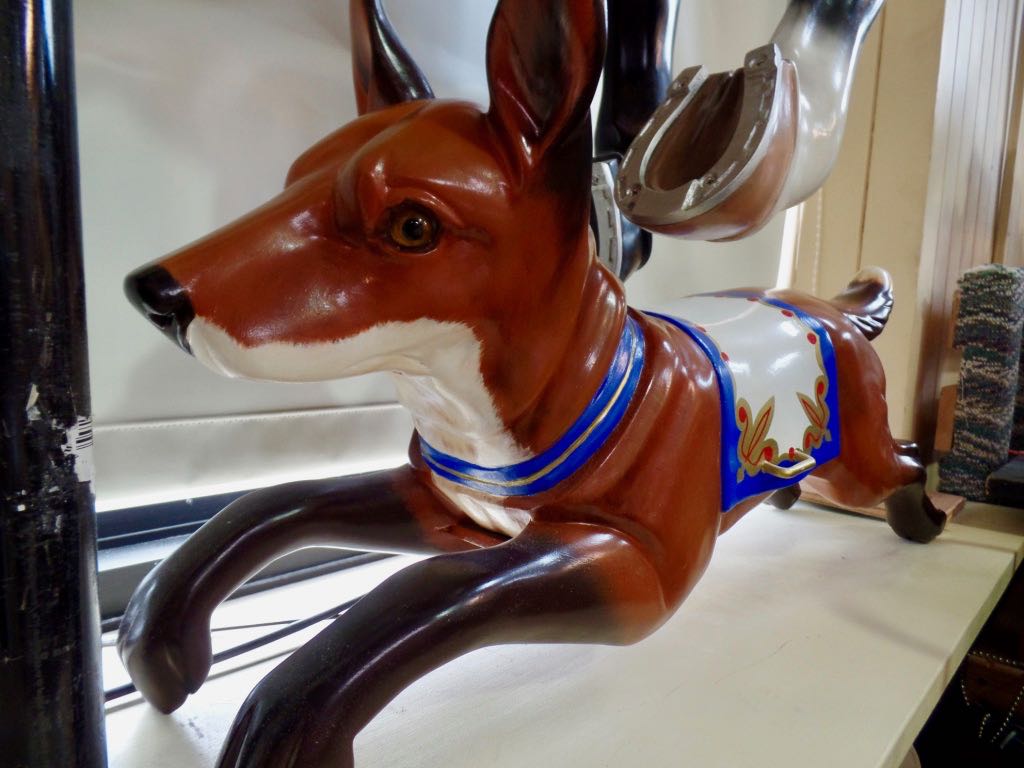 Carousel fox sneaks into your house, eats all your pasta ... 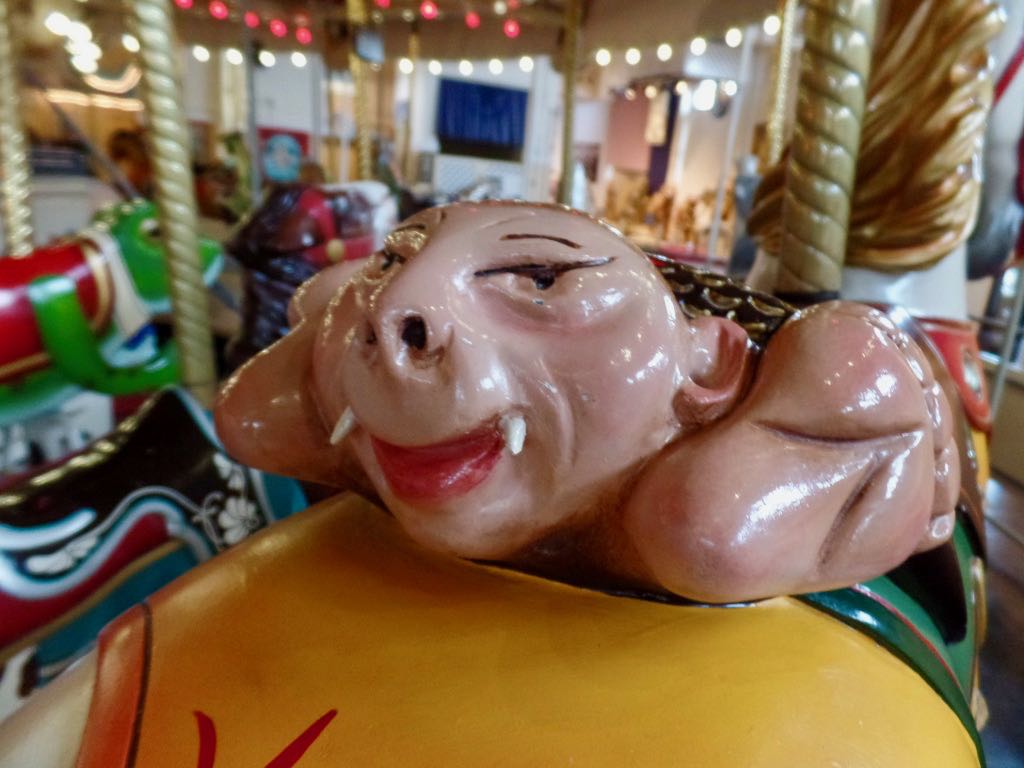 This fangy creature, a secondary figure on one of the Merry-Go-Round Museum's horses, is a billiken. Billiken are not some minor spirit of long-ago ancient days; they were charm dolls created from the early 1900s. Around the time Kewpie dolls came out. So if you're wondering where Saint Louis University got its mascot from, it's this thing. 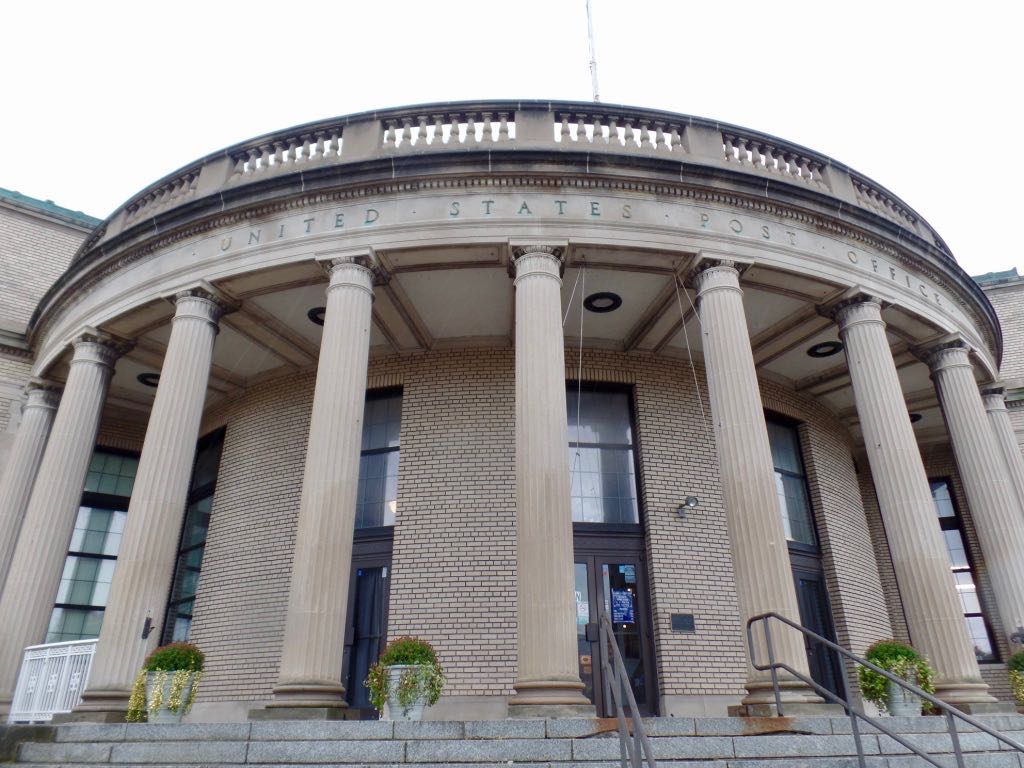 The front of the Merry-Go-Round Museum, which was a WPA-era post office and one of the surprisingly few round ones. 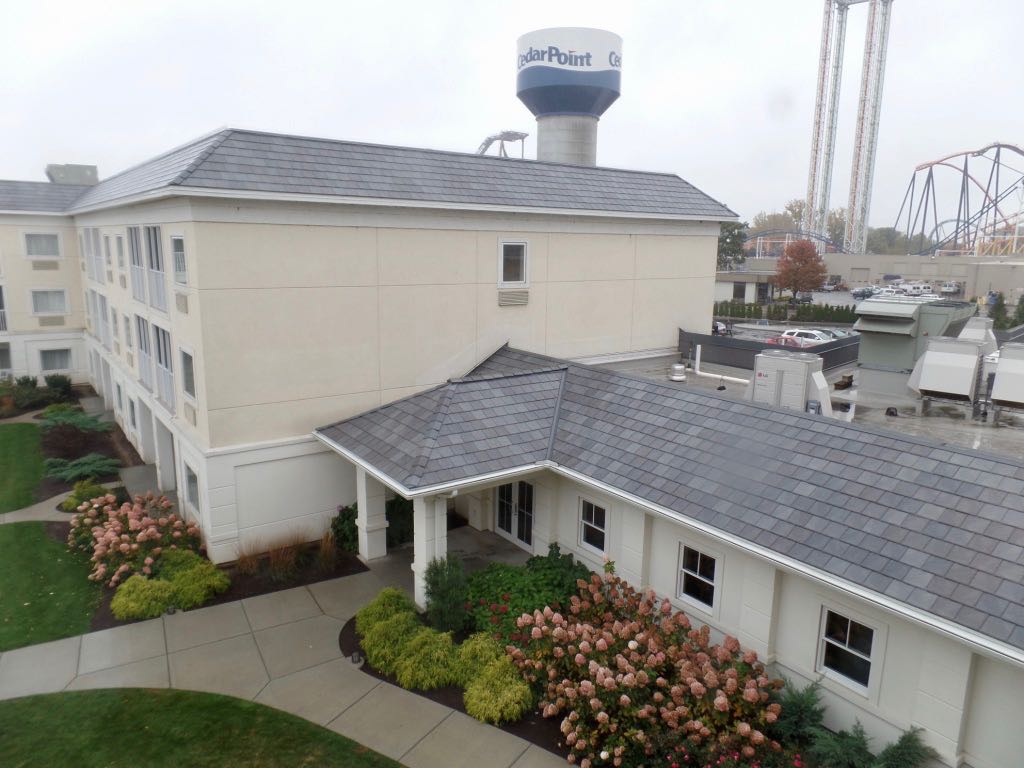 Back to Cedar Point! Here's the view out our Breakers hotel-room entrance. 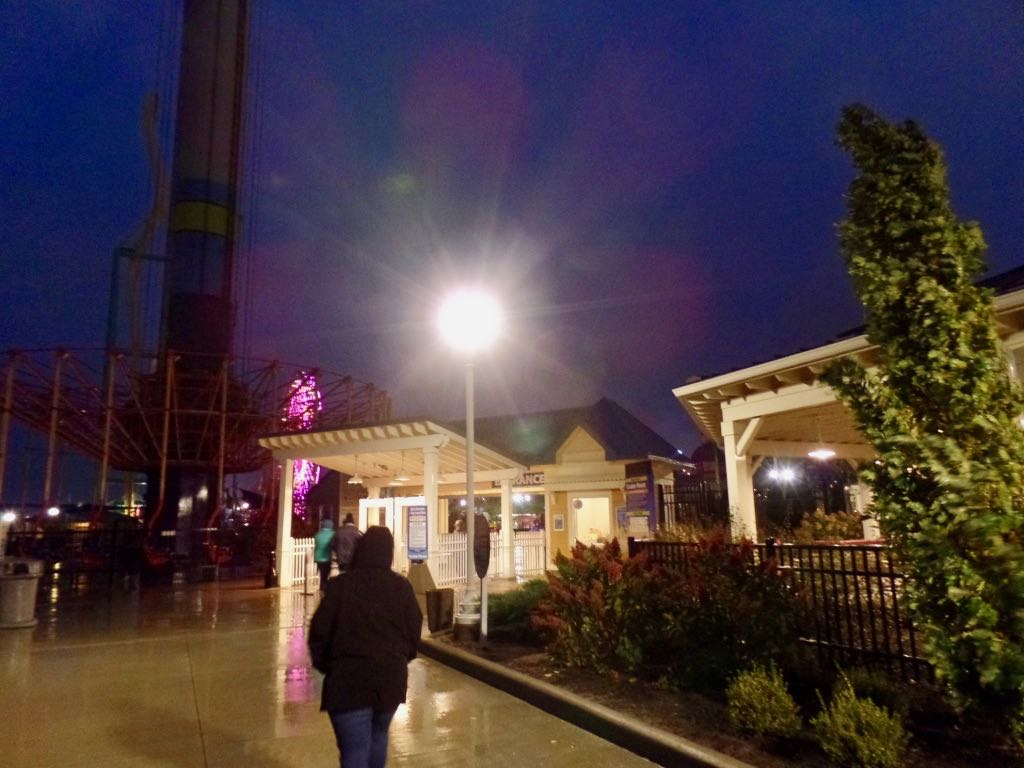 And here, after a rest, we finally get in, near sunset and after there's been a spot of rain to get us in a reflective mood. 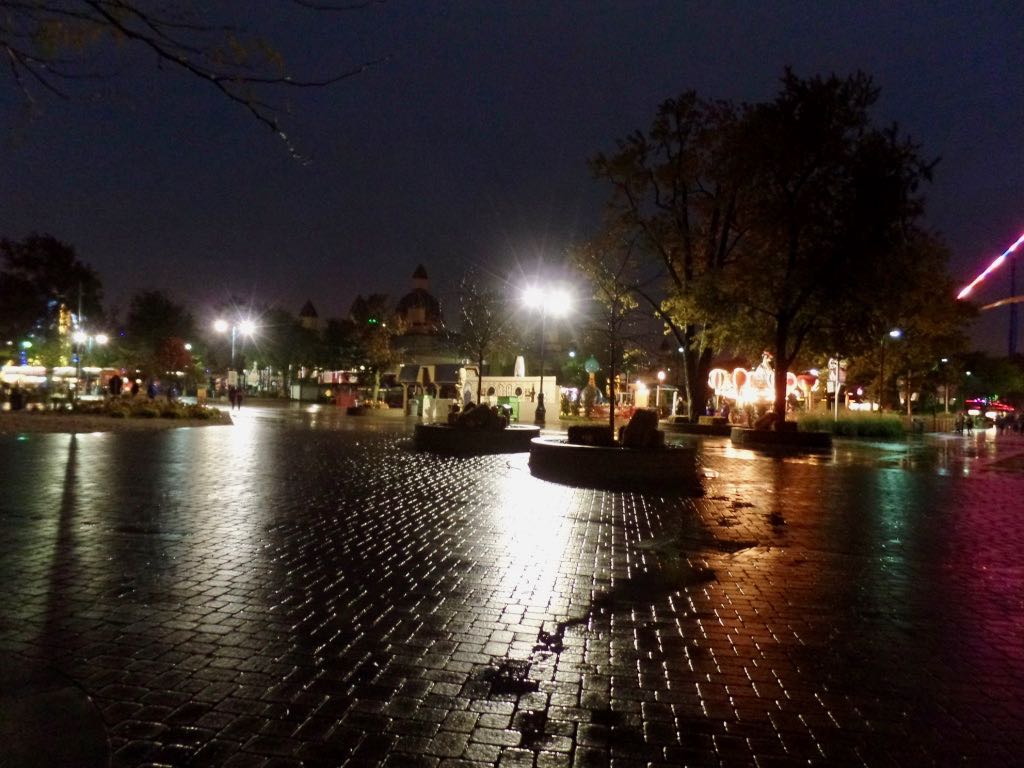 The area near the beach entrance, over where the Oceana stadium had been torn down. The dome in the center-left is the Coliseum. Most of the rides here are from a secondary Planet Snoopy kids' area. 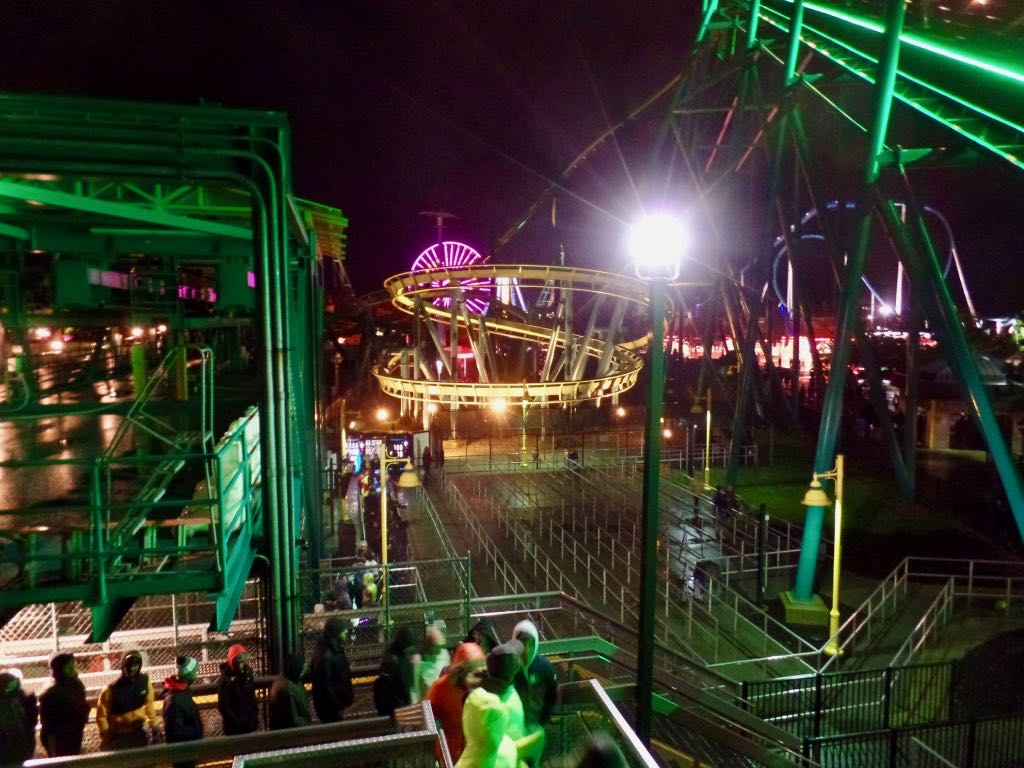 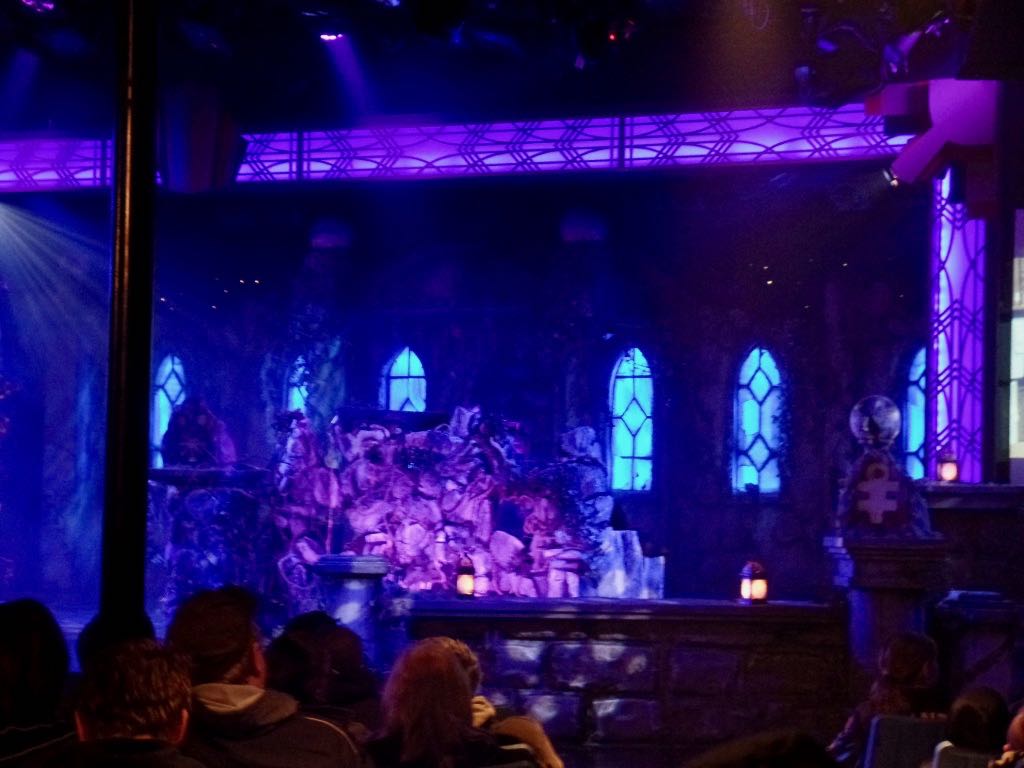 The stage at the Aldrich Theater, waiting for the Midnight Syndicate show. It had returned to Cedar Point, displacing the magic-and-dance show, with its blend of live music and fourth-wall-breaking horror. Always fun to see. 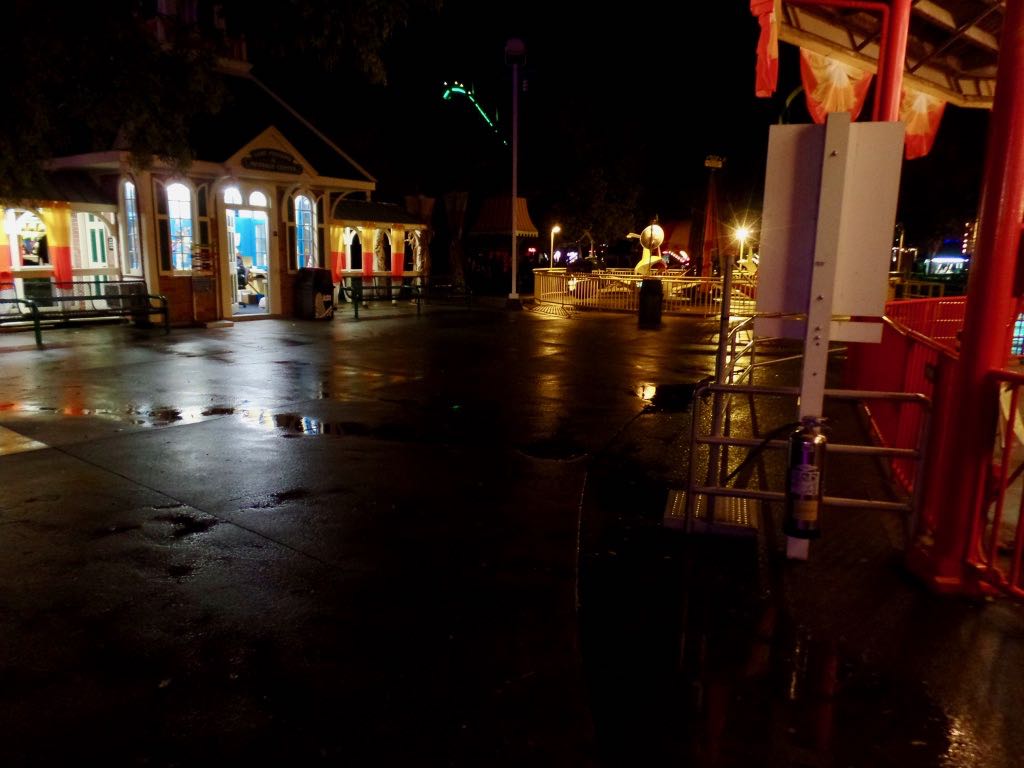 Back toward the Kiddie Kingdom. The building on the left is a lost-persons and message center (Cedar Point has no central public address system). It also clearly at some point was a train ride station. Interesting building reuse. 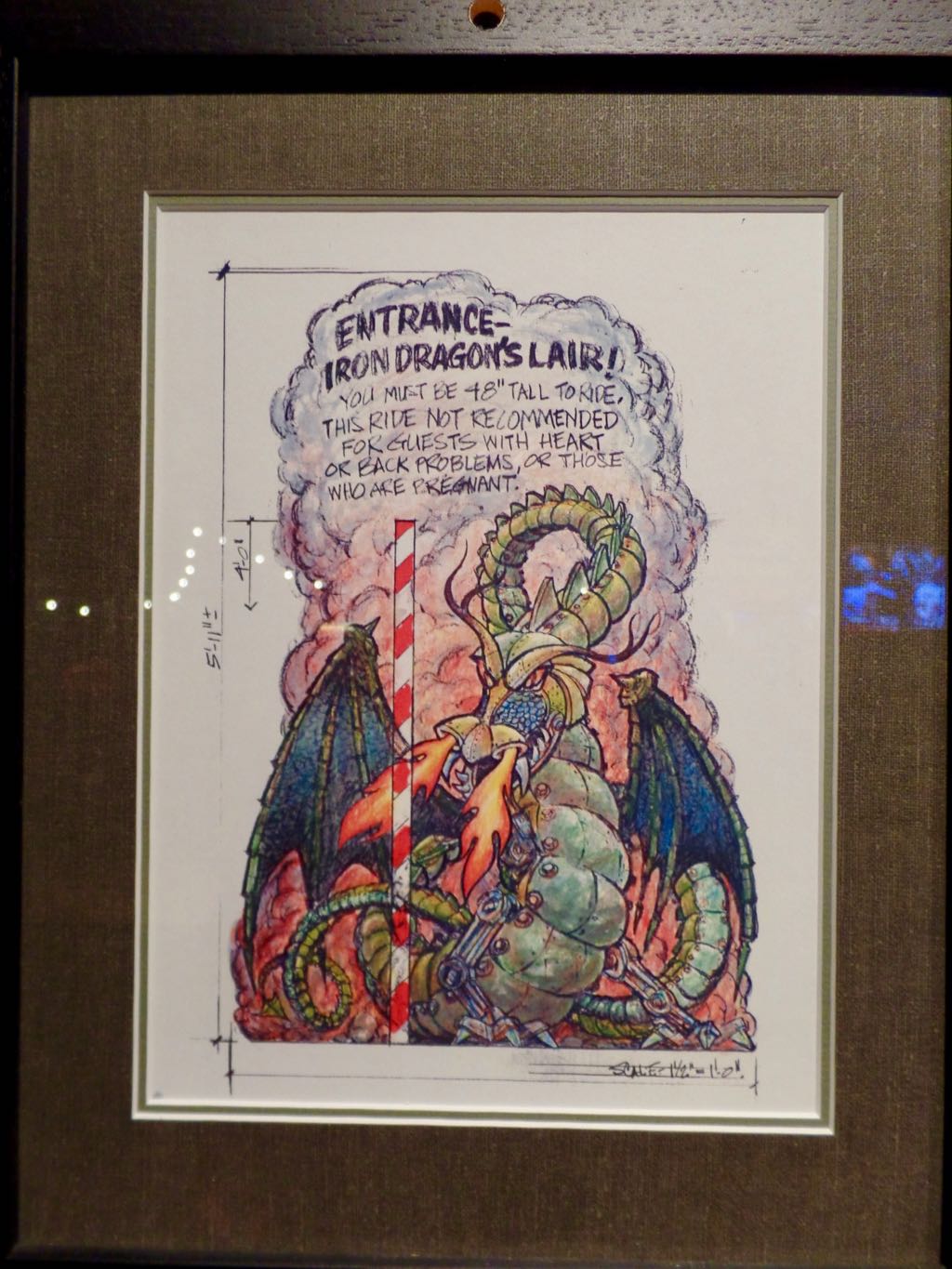 For dinner we went to Melt, one of the few sit-in restaurants, and over by the Kiddie Kingdom. Melt is in fact an Ohio-area chain, serving sandwiches the size of bricks; we each had a fried-grilled-cheese sandwich that would have adequately fed both of us. The thrill, though, was in the wall decor, which was all old Cedar Point stuff. Here's artwork from the old Iron Dragon ride-height sign, from before they replaced it with a dull generic chainwide height notice. 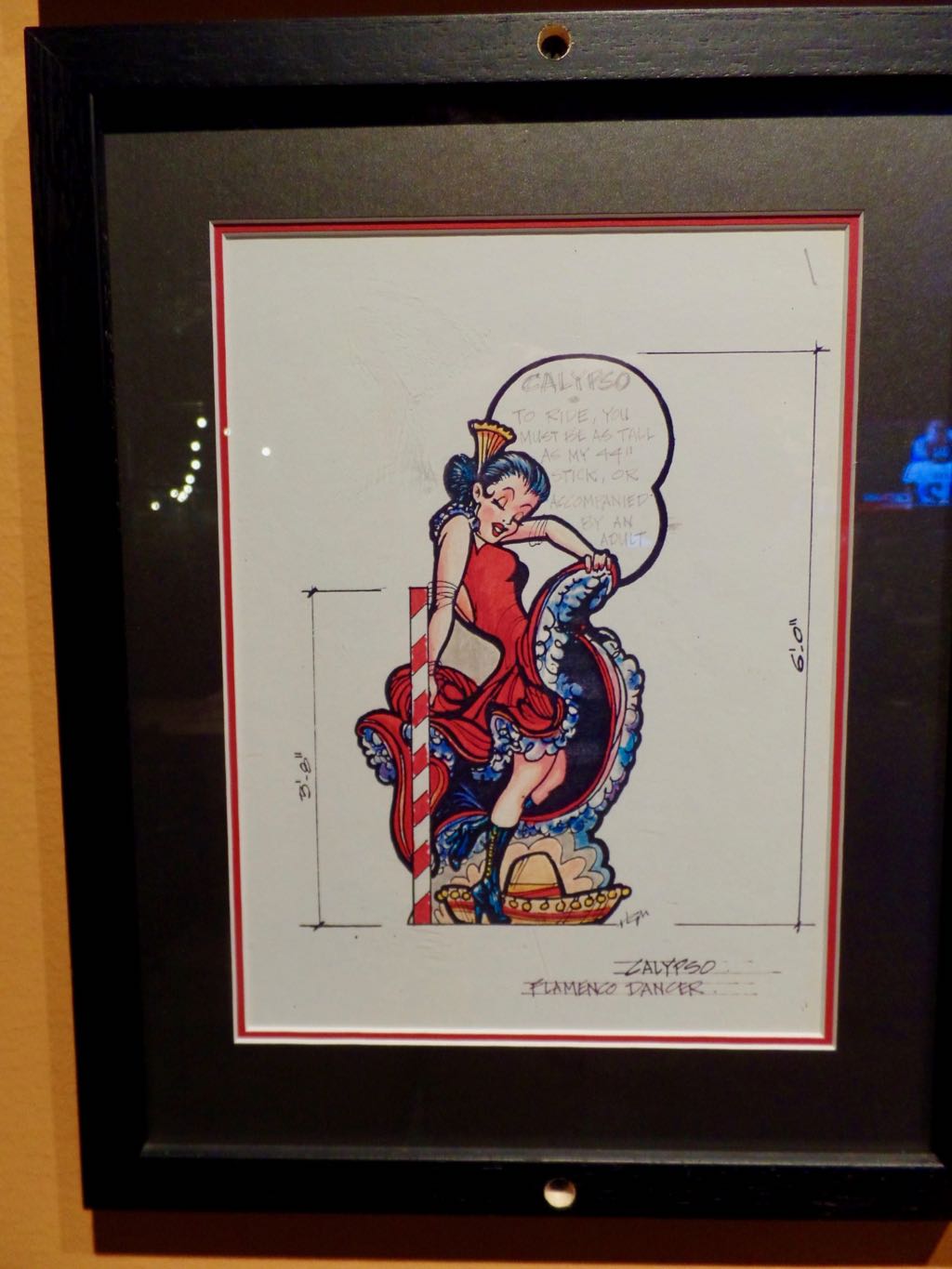 And this is the minimum-height sign for Calypso, a ride which they've since relocated and renamed the Tiki Twirl. 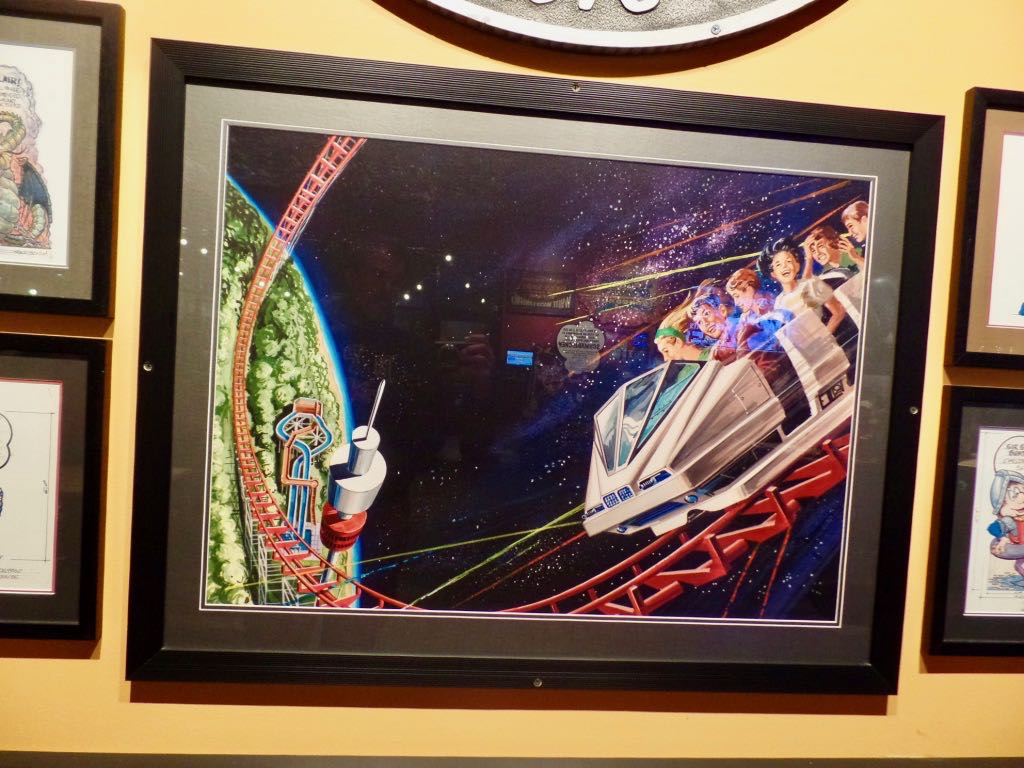 Circa 1990 advertising art for Magnum XL-200, rather fancifully suggesting the ride goes all the way into space, or at least above the Space Spiral (which was at the other end of the park). The Space Spiral was 330 feet tall, although riders only got up to 285 feet. Magnum XL-200 is 205 feet tall. 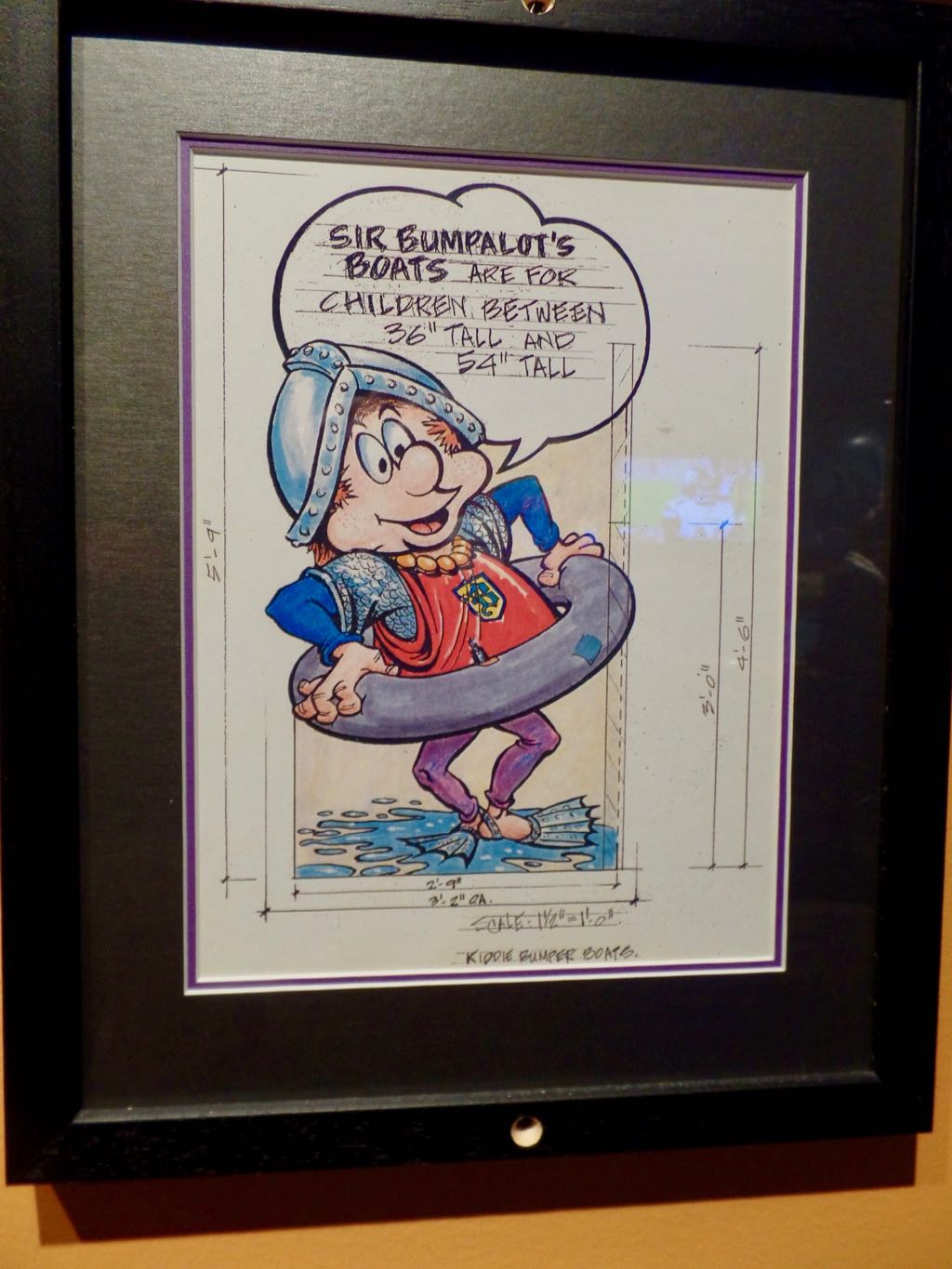 Old ride-height sign for a kiddie ride, Sir Bumpalot's Boats. Wikipedia lists no such ride, but the list of former Cedar Point attractions mentions the Bumper Boats, a kiddie ride near the Gemini children area, from 1993 to 2013. 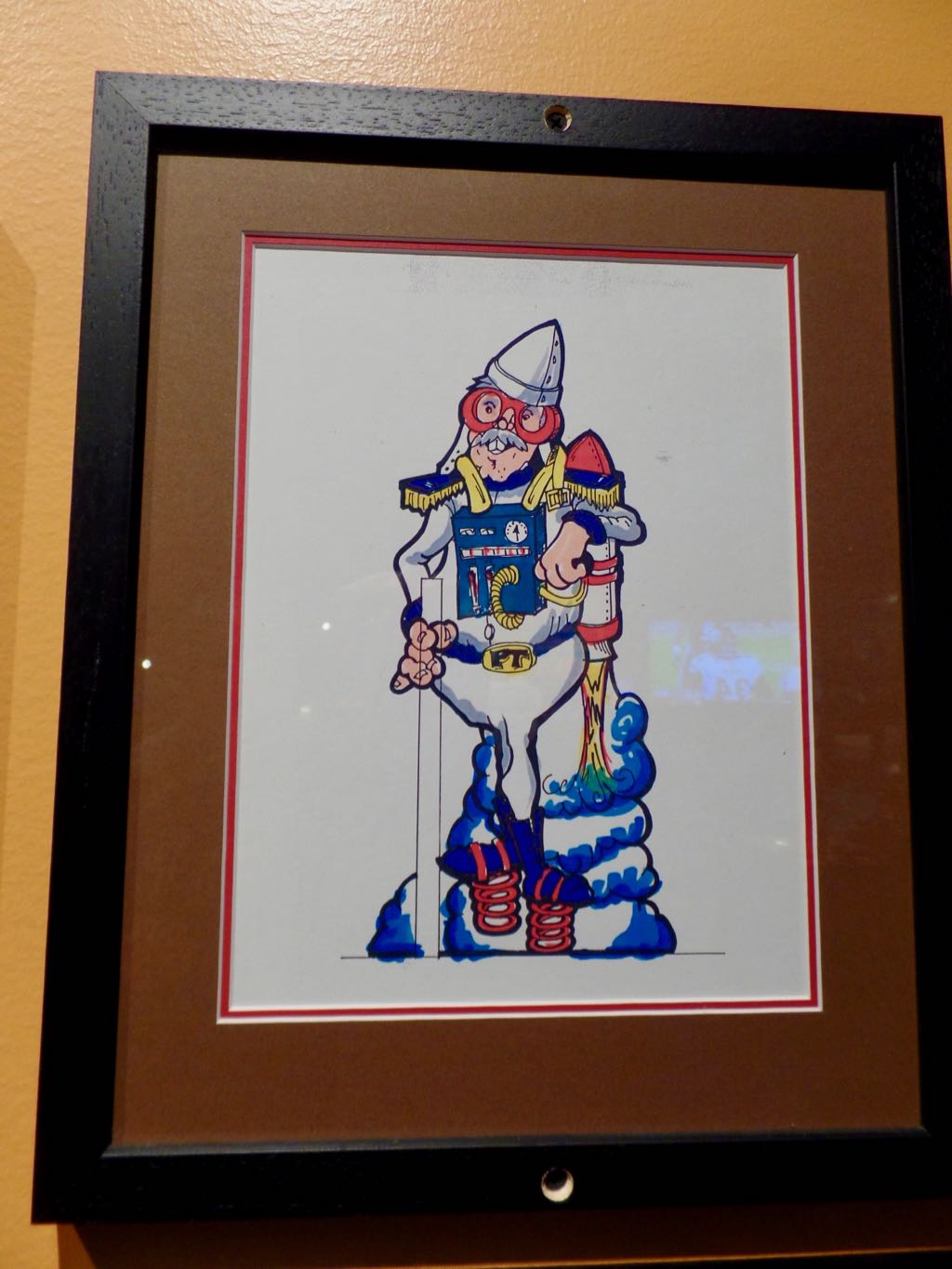 Ride sign art that isn't complete enough to identify it. But

bunny_hugger remembers this as the art for Power Tower, which opened in 1998, giving some idea of how recently, really, Cedar Point got rid of these more interesting custom signs. 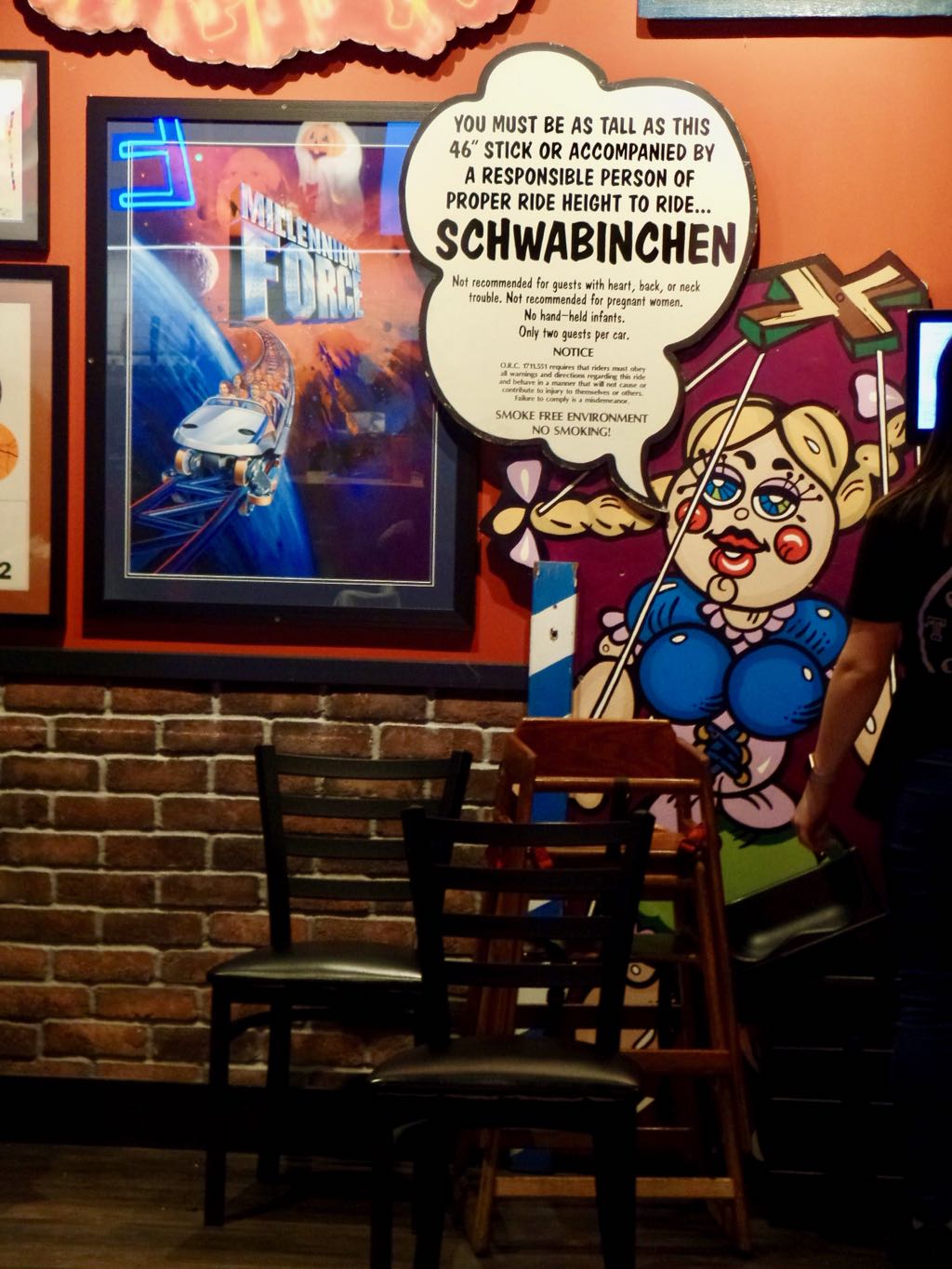 Schwabinchen was at the park from 1970 to 2002. I assume this is the actual ride height sign and, boy, the marionette aspect is certainly an artistic choice, isn't it? I'm sorry they went to generic height signs because the artistic impulses that create something like this are wonderful and quirky and strange and I want more of that.