Every time you call me name

We had a major storm roll through the other day, the remains of Tropical Storm Cristobal getting way out of its zone. We got something like an inch of rain in one hour, which is a bit much. No serious problems, although some neighborhood streets were flooded and some branches knocked down.

And it turned productive. The rain weighed down a bunch of tree branches, blocking our satellite TV. But we had just borrowed a tree-trimmer-on-an-extendable-pole thingy from

bunny_hugger's parents. Right after the inch of rain in an hour there was a relative lull and no obvious signs of lightning. So out I went to trim the branches that were obviously in the way. Unfortunately it was daytime and still bright enough I couldn't use a flashlight at the receiver to confirm that I got every branch that's in the signal's way. But I did get enough that our reception came back, and it stayed back as the tree dried out.

The next day we got some extremely high wind gusts, bad enough that the county warned they might sound the tornado siren, and we moved our mouse into the basement and got ready to move our rabbit there too. This dire circumstance never happened. But it did blow the trees around enough to intermittently block the satellite. But it was for only a couple seconds each time, and is probably just that the trees were getting thrown way out of their lanes. So it's probably not something worth trimming for.

We still need to get a working over-the-air antenna for the local channels and sub-channels, though.

Let's spend a lot more time looking at obsolete Cedar Point ride signs and related memorabilia. This is literally the plurality of my photos for the amusement park that Saturday in October 2018. 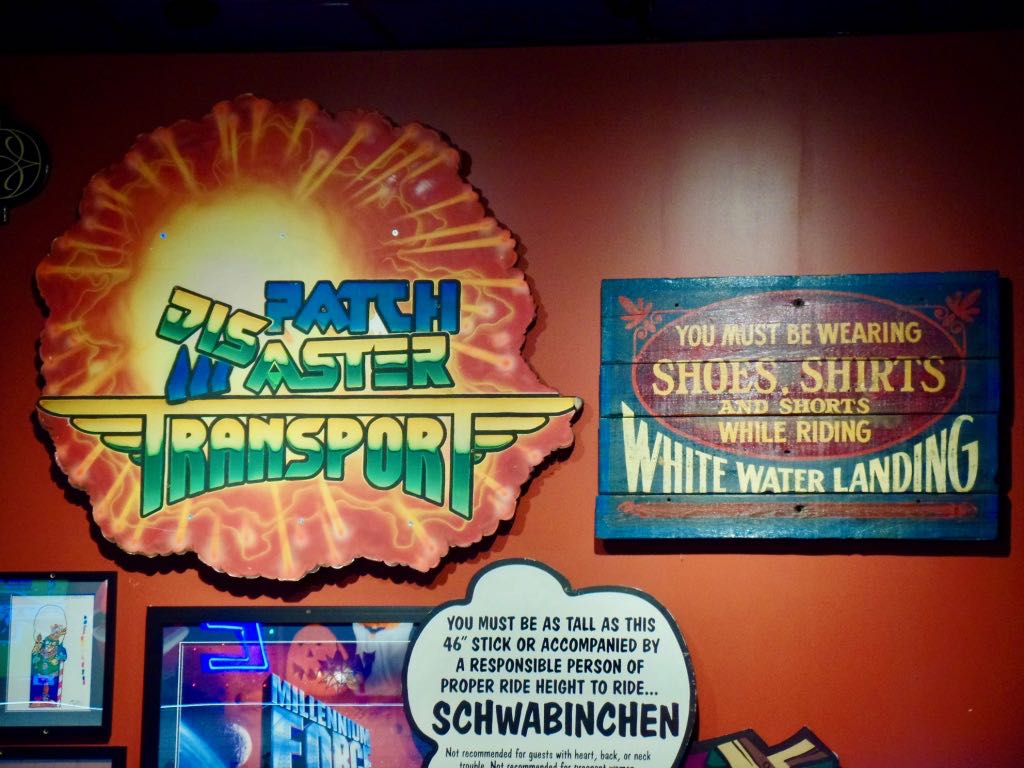 Signs for two defunct rides. White Water Landing was the log flume, 1982 - 2005. Disaster Transport was the bobsled roller coaster from 1990 to 2012 (before 1990 it was named Avalanche Run); the design reflects that it was ``supposedly'' called Dispatch Master Transport, with a theme of sending Macguffium to Alaska for the reasons, only something Goes Wrong and you have this exciting out-of-control bobsled ride. 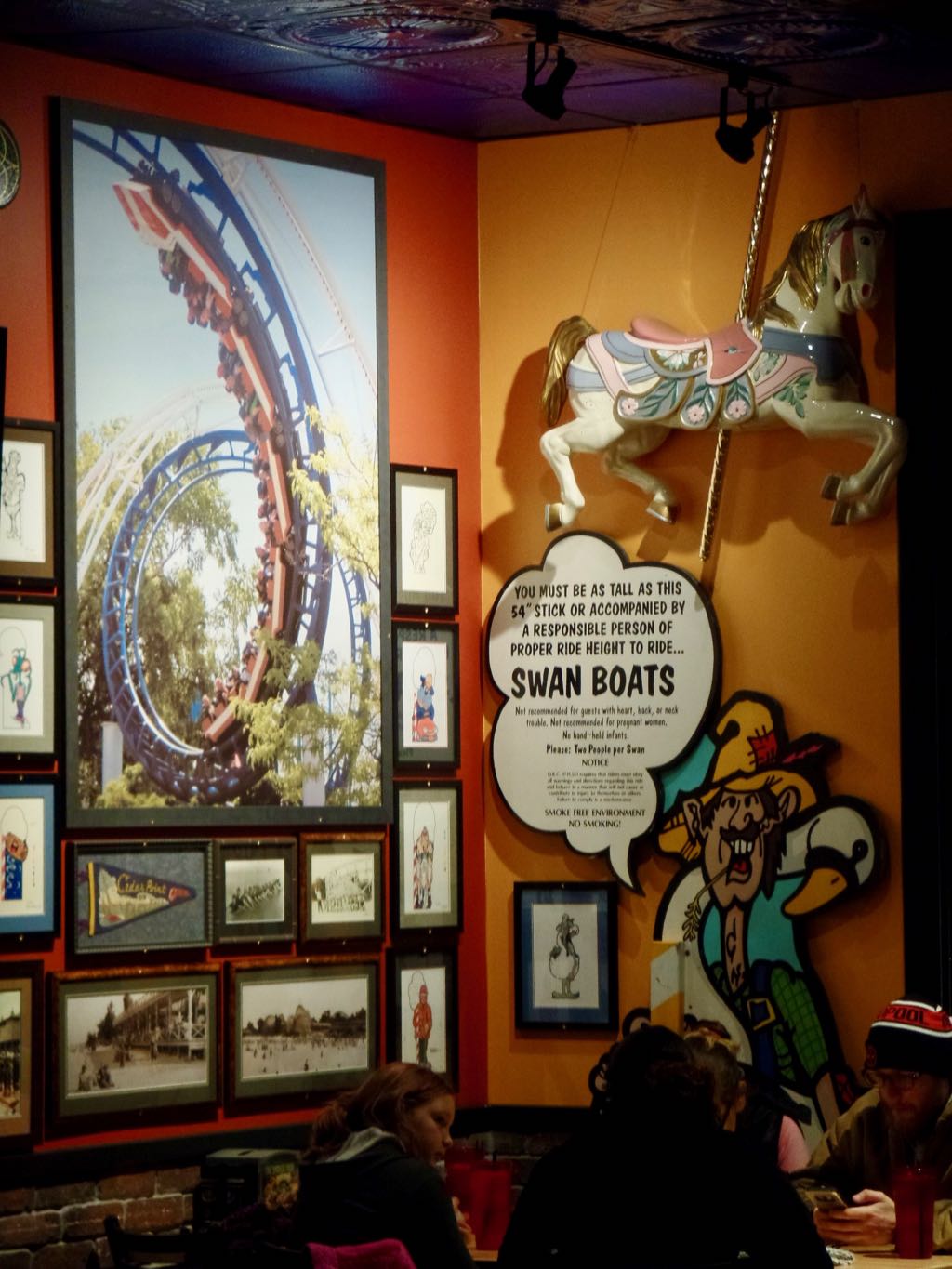 Height sign for the Swan Boats (moved to Michigan's Adventure for 2004), along with a carousel horse I have no idea where it came from. Also a bunch of smaller pictures, plus a giant one of Corkscrew. 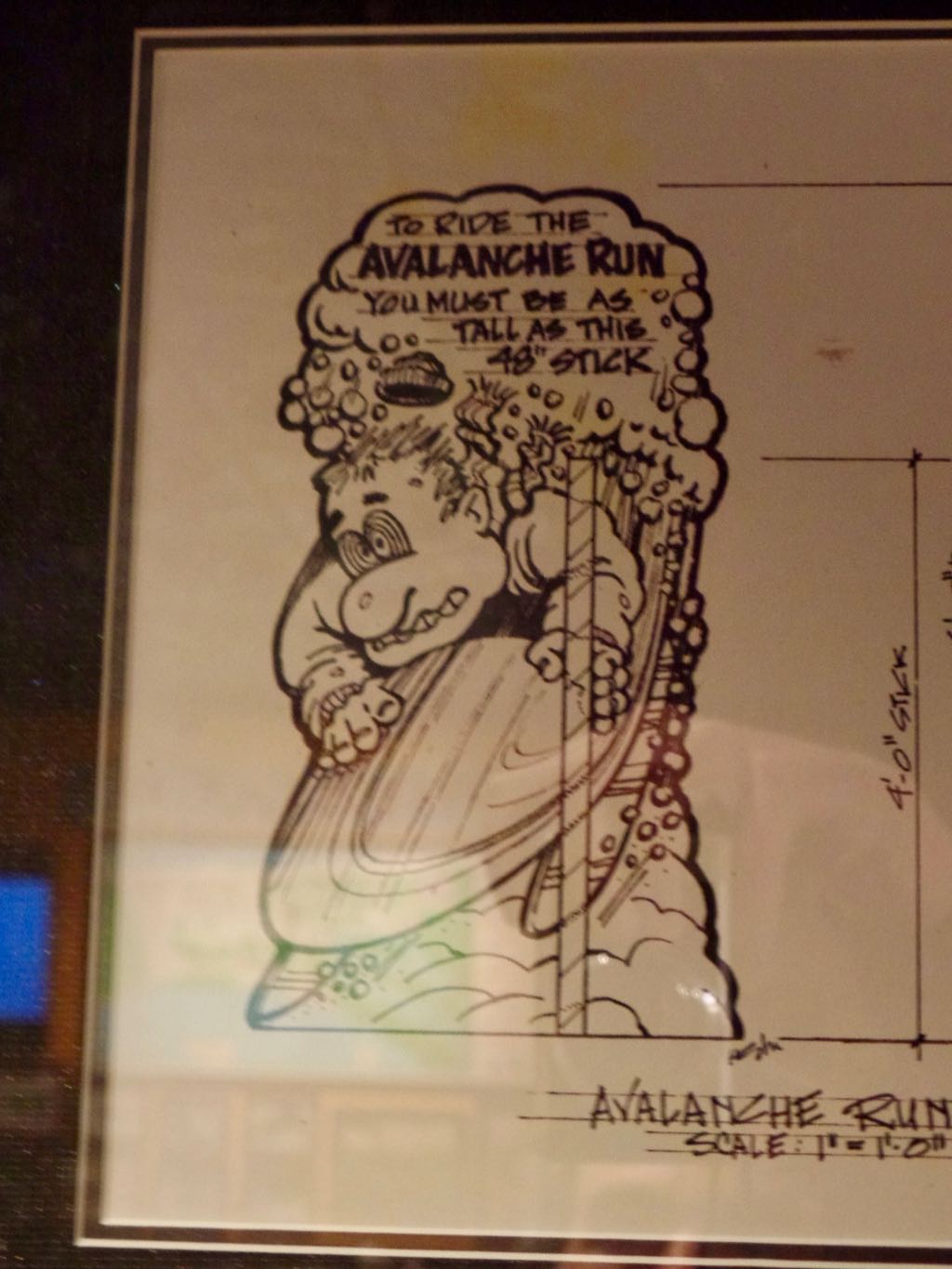 Black-and-white art for Avalanche Run's ride height sign. Avalanche Run is the bobsled coaster that would be enclosed and turned into Disaster Transport. 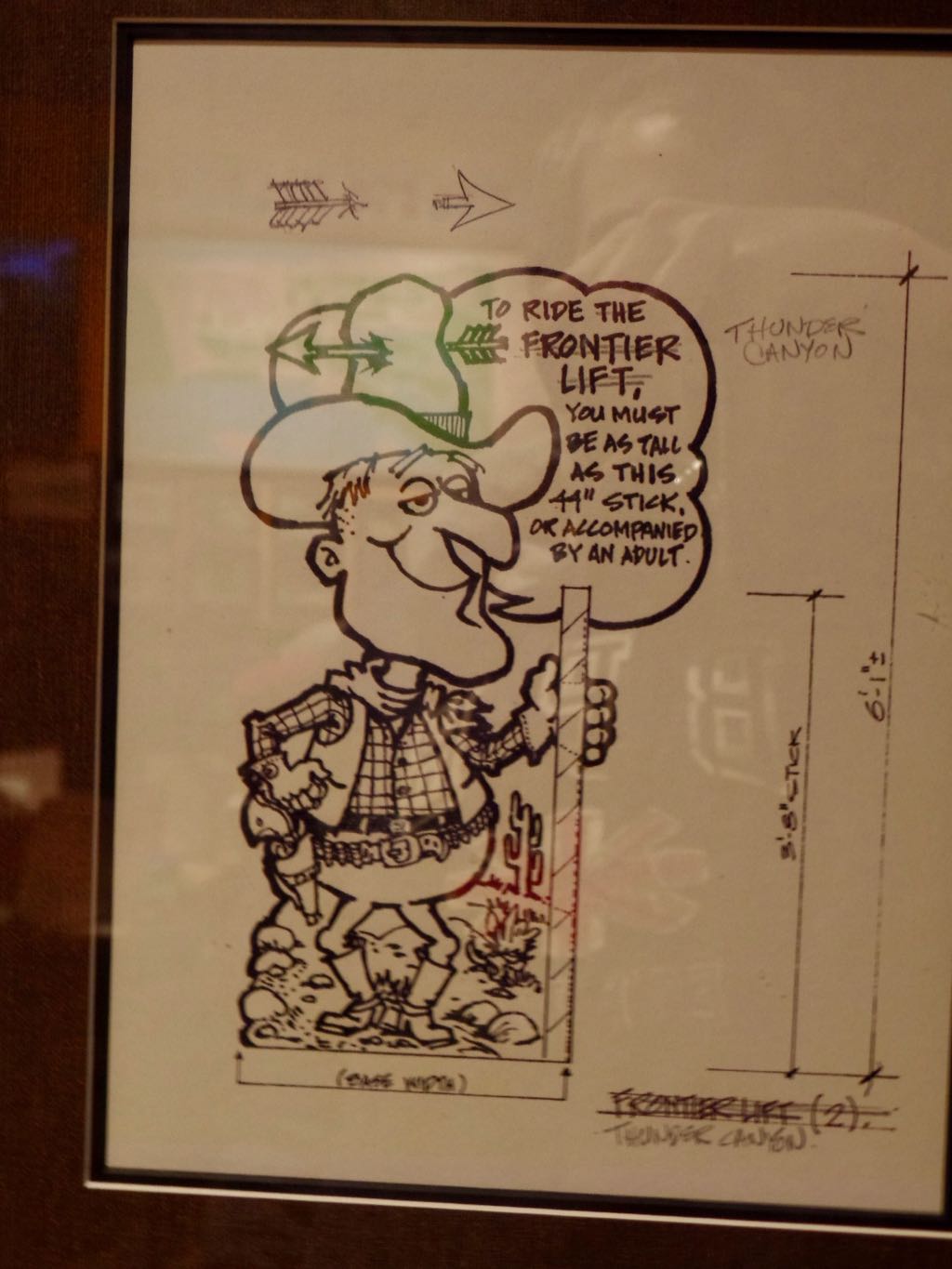 Height sign for the Frontier Lift, a sky car ride that would get you from the front to the back of the park. It ran from 1968 to 1985, bringing folks from what's now the Iron Dragon station to what's now this oversized bathroom building near the Town Hall Museum. 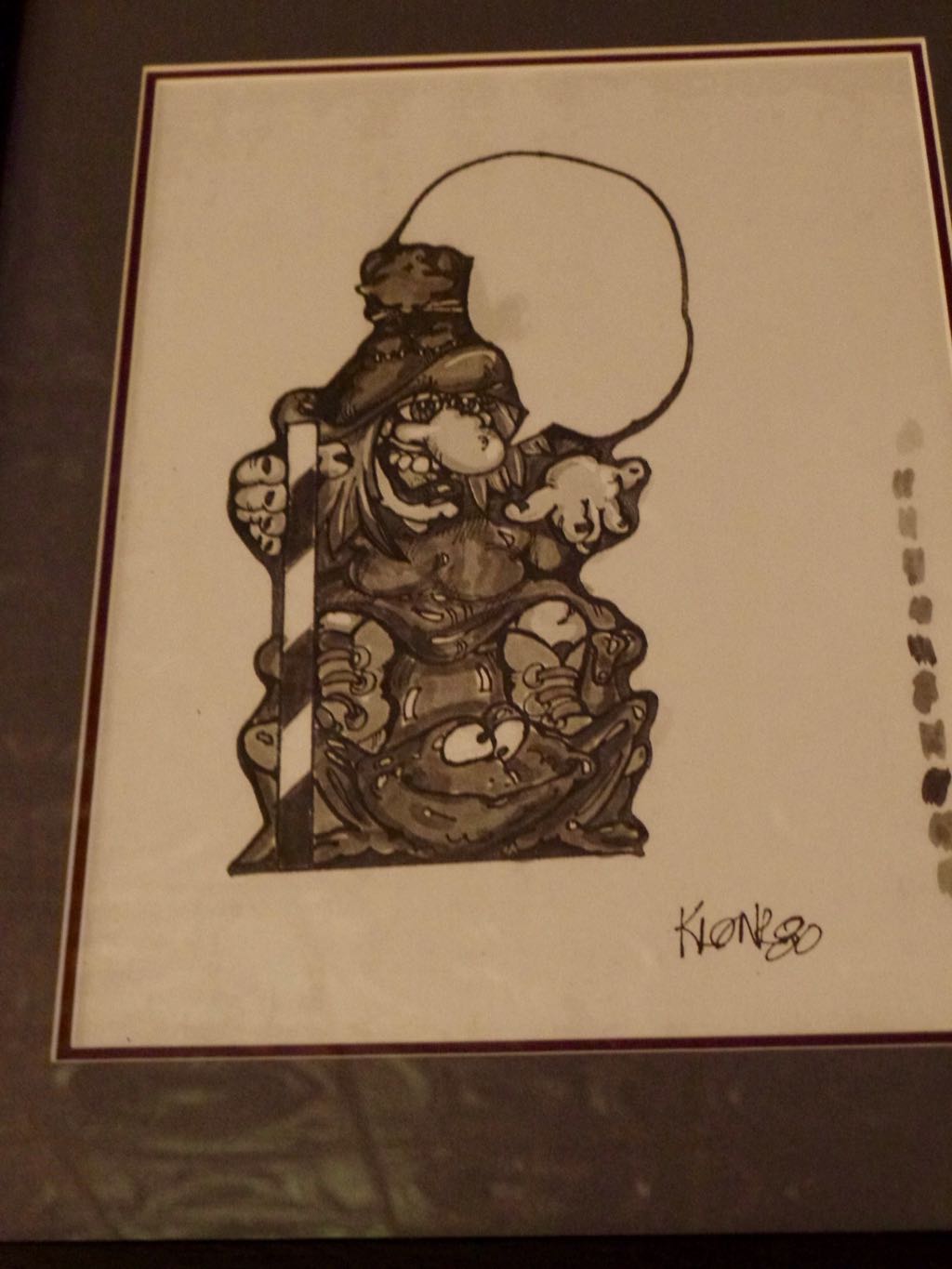 I don't know what this was for. Sorry. Apparently it's something they had in 1980? 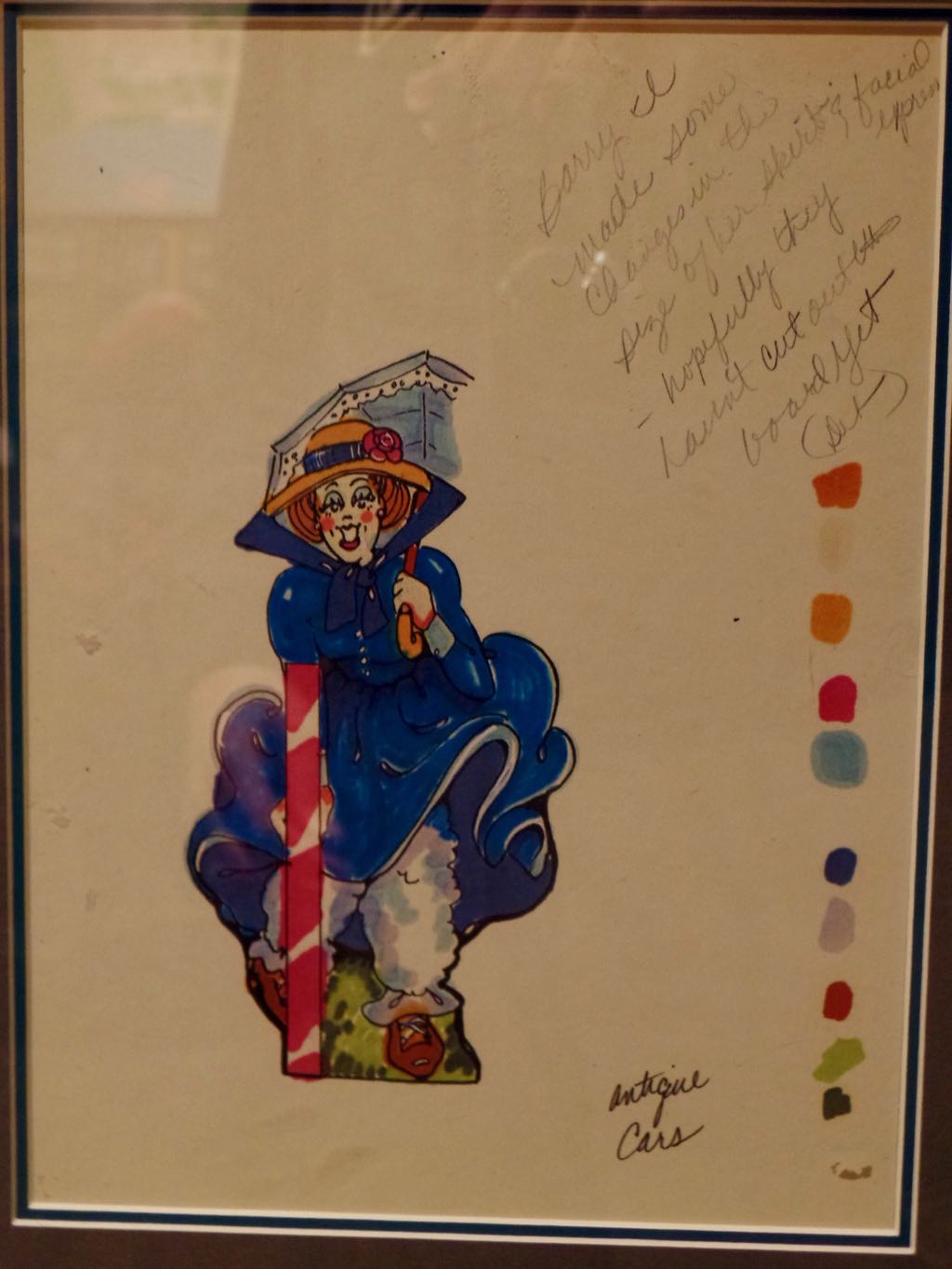 Plans for another ride height sign. No indication what ride it's for, but the handwriting on it reads, ``Barry I made some changes in the size of her skirt & facial express[ion] --- hopefully they haven't cut out the board yet (Det[?])''. 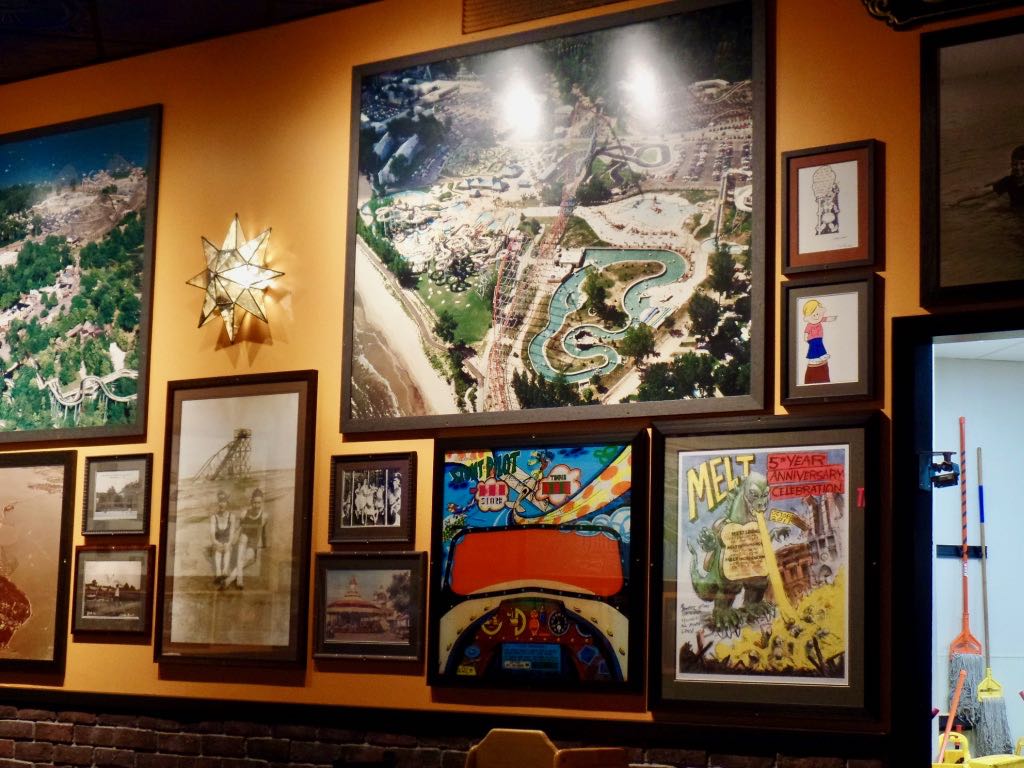 More pictures from the wall, including several vintage Cedar Point photos, and the backglass from an arcade flight simulator (Stunt Pilot, bottom center), and some celebration of Melt's own doing. 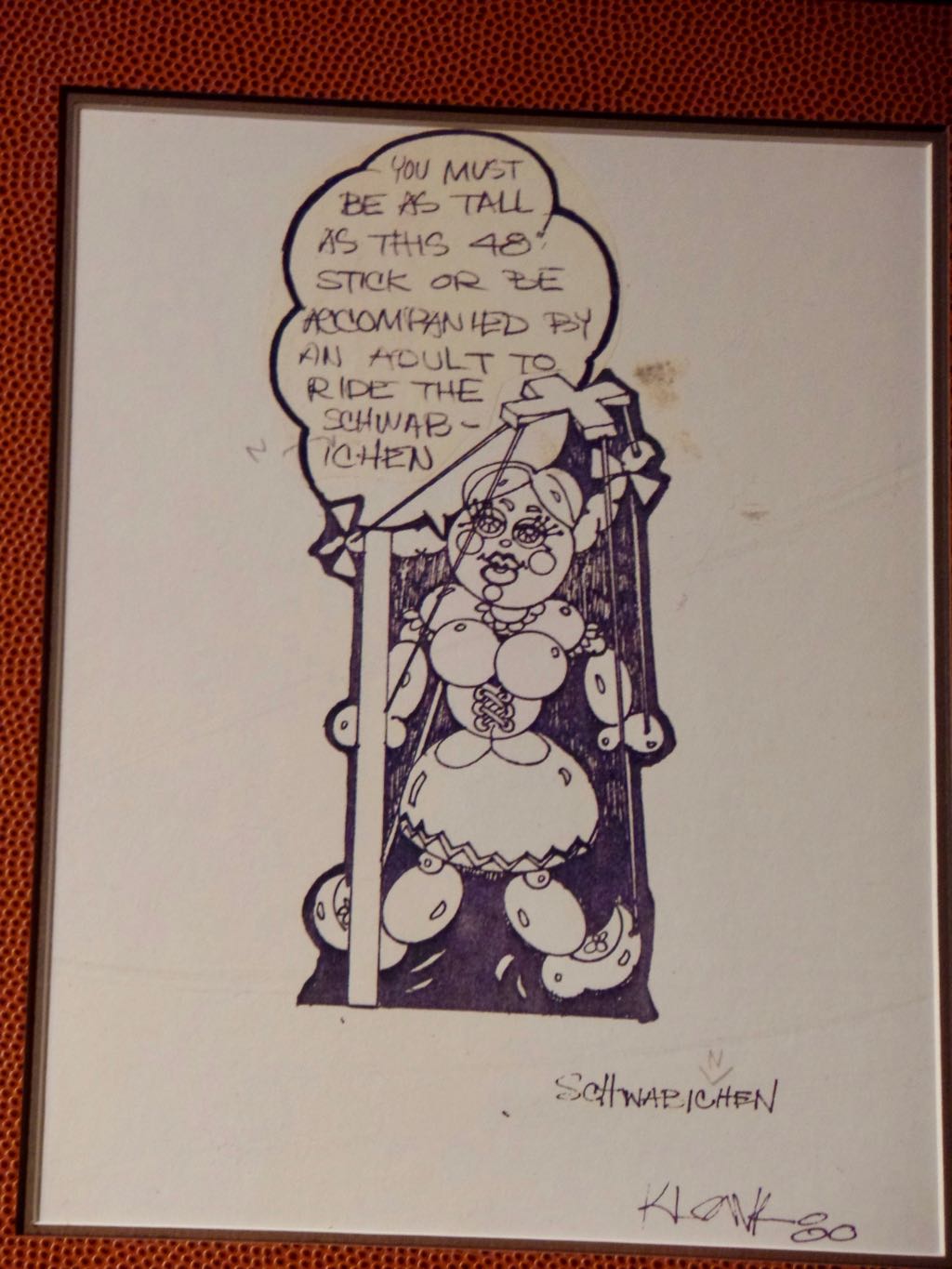 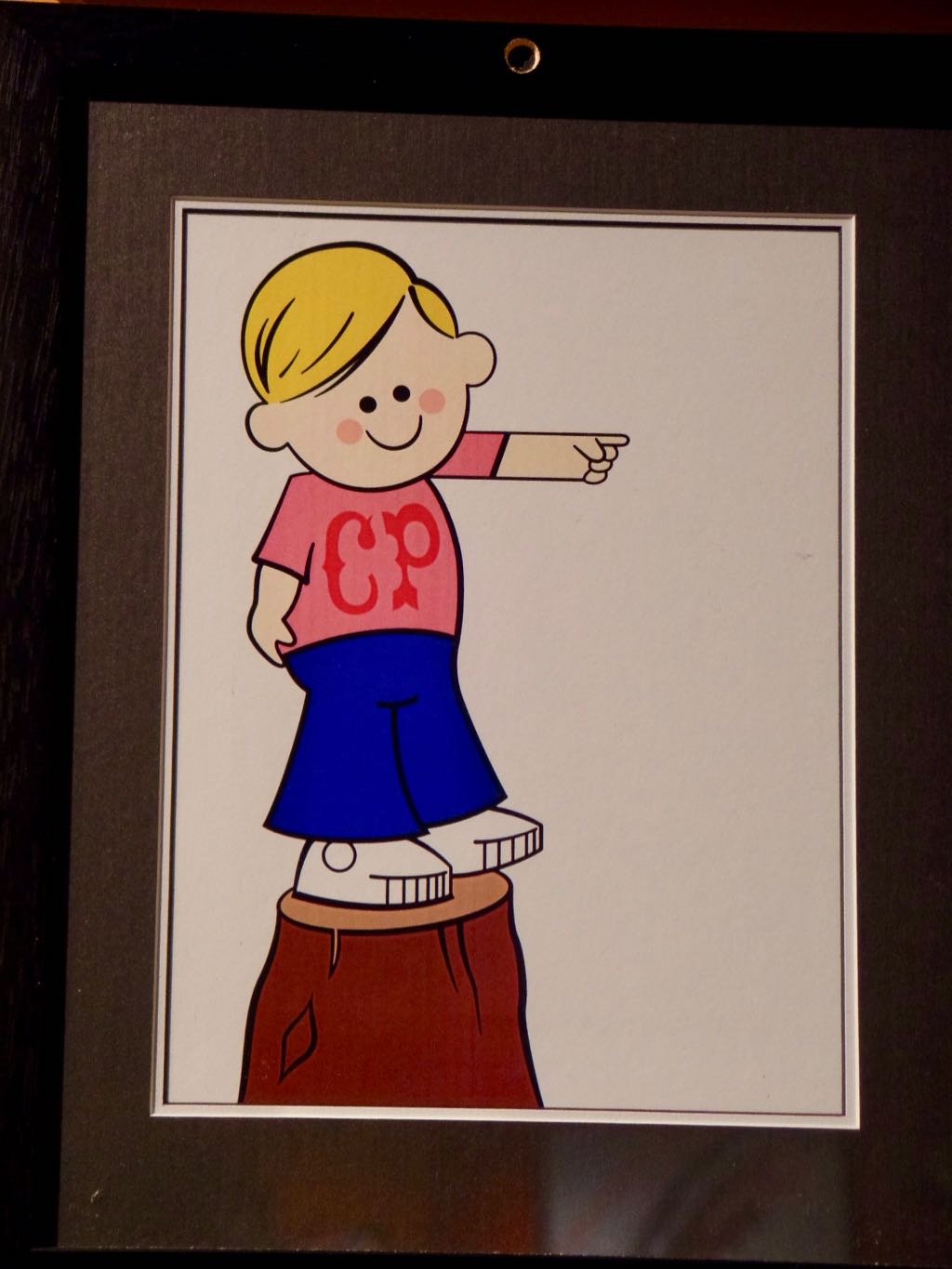 I'm going ahead and guessing whatever this was for was done in the 70s and animated by Rankin/Bass. 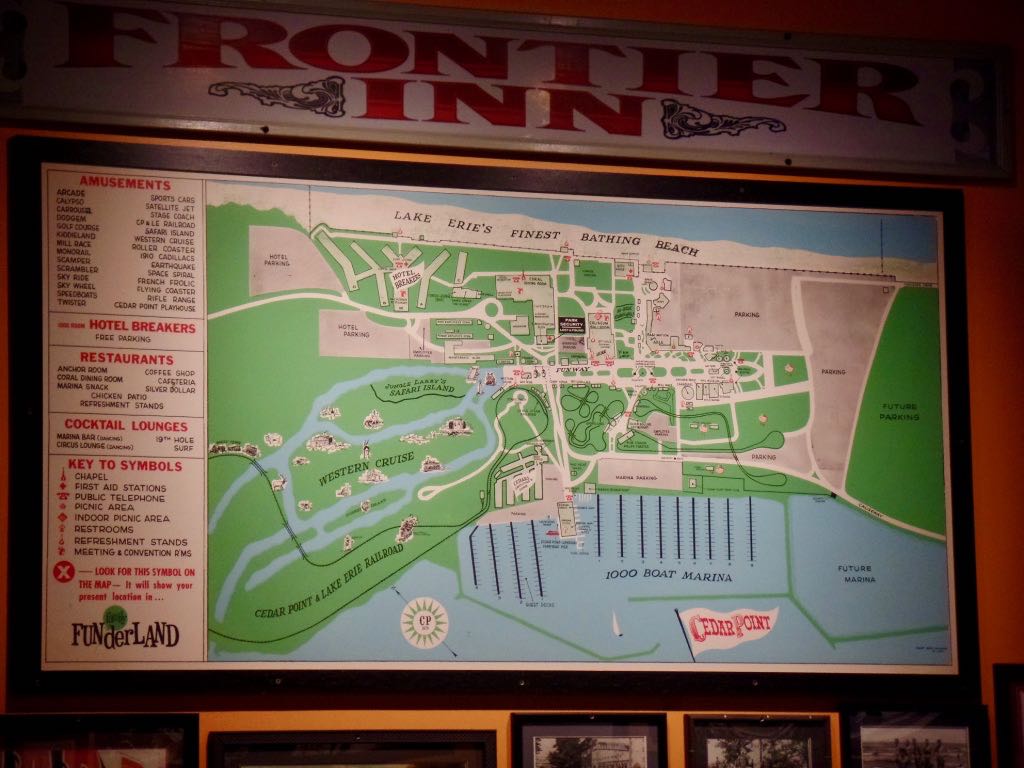 1960s-vintage map of Cedar Point, which is just incredibly tiny, compared. The Western Cruise area is about the location of Iron Dragon and Top Thrill Dragster and that feels like the front of the park to me. 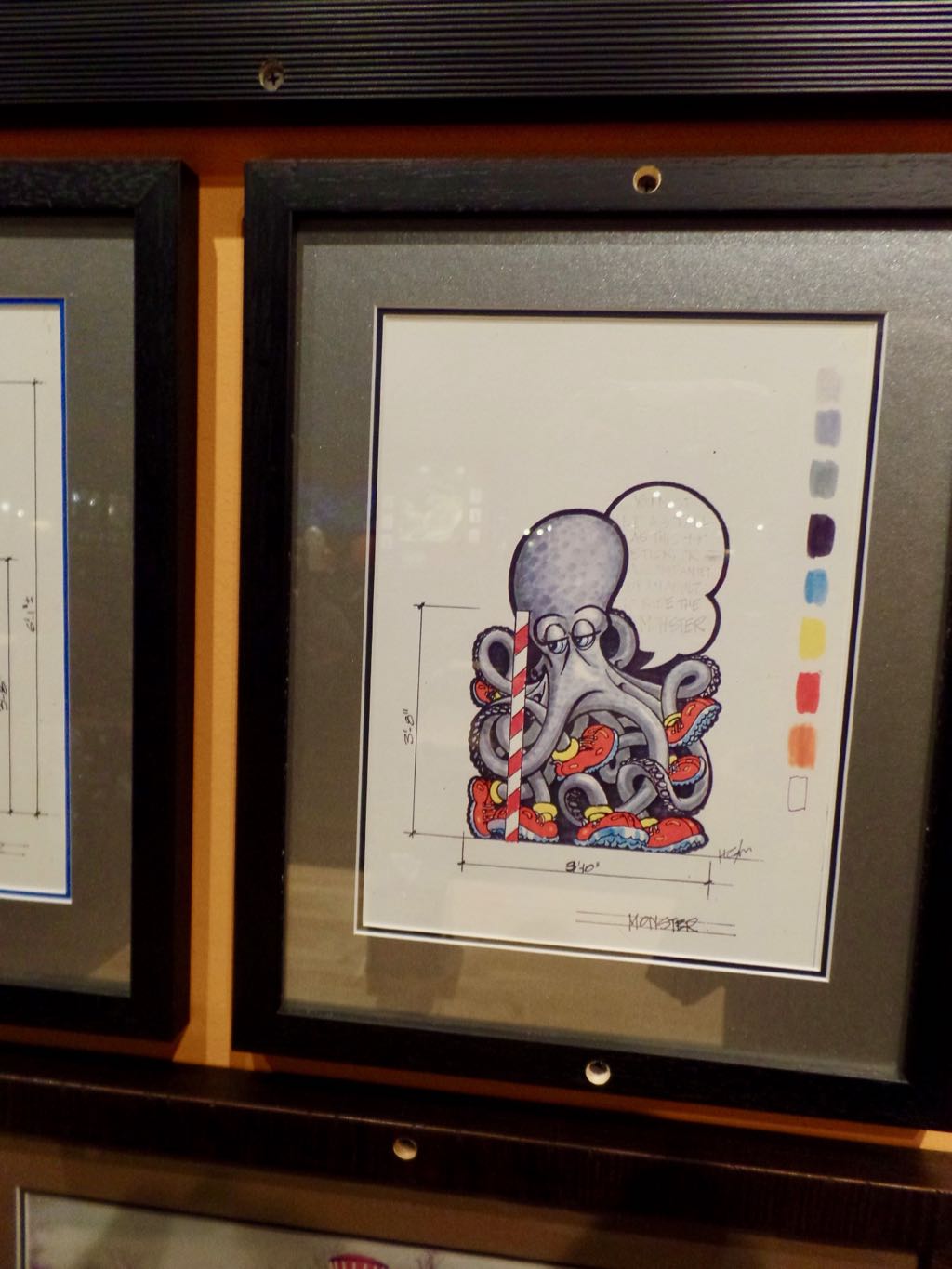 Ride sign drawing for, certainly, some Octopus ride. Possibly Monster, which is technically a different model of the same basic ride type. 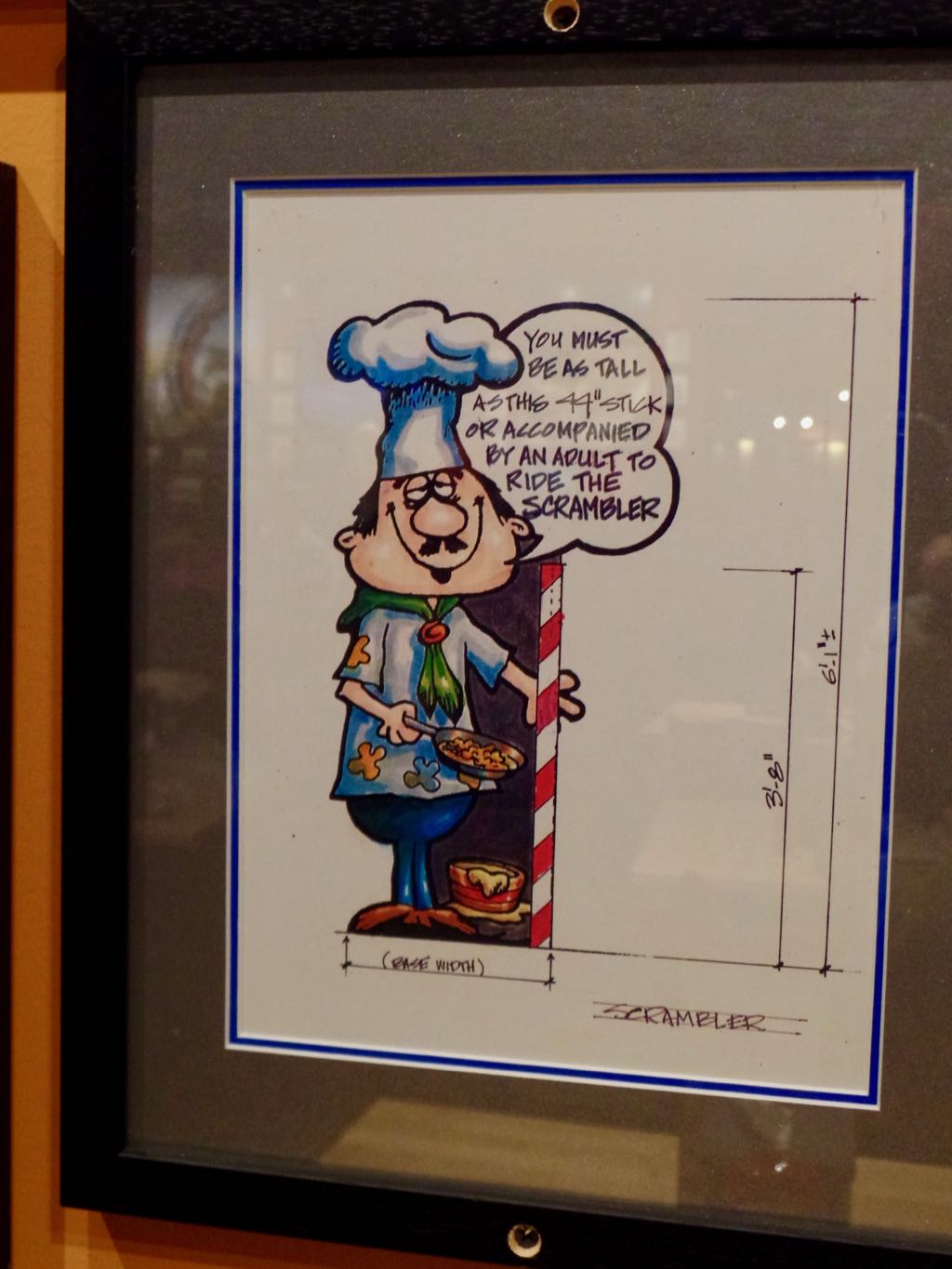 Ride sign for the Scrambler and boy but isn't this a delight? 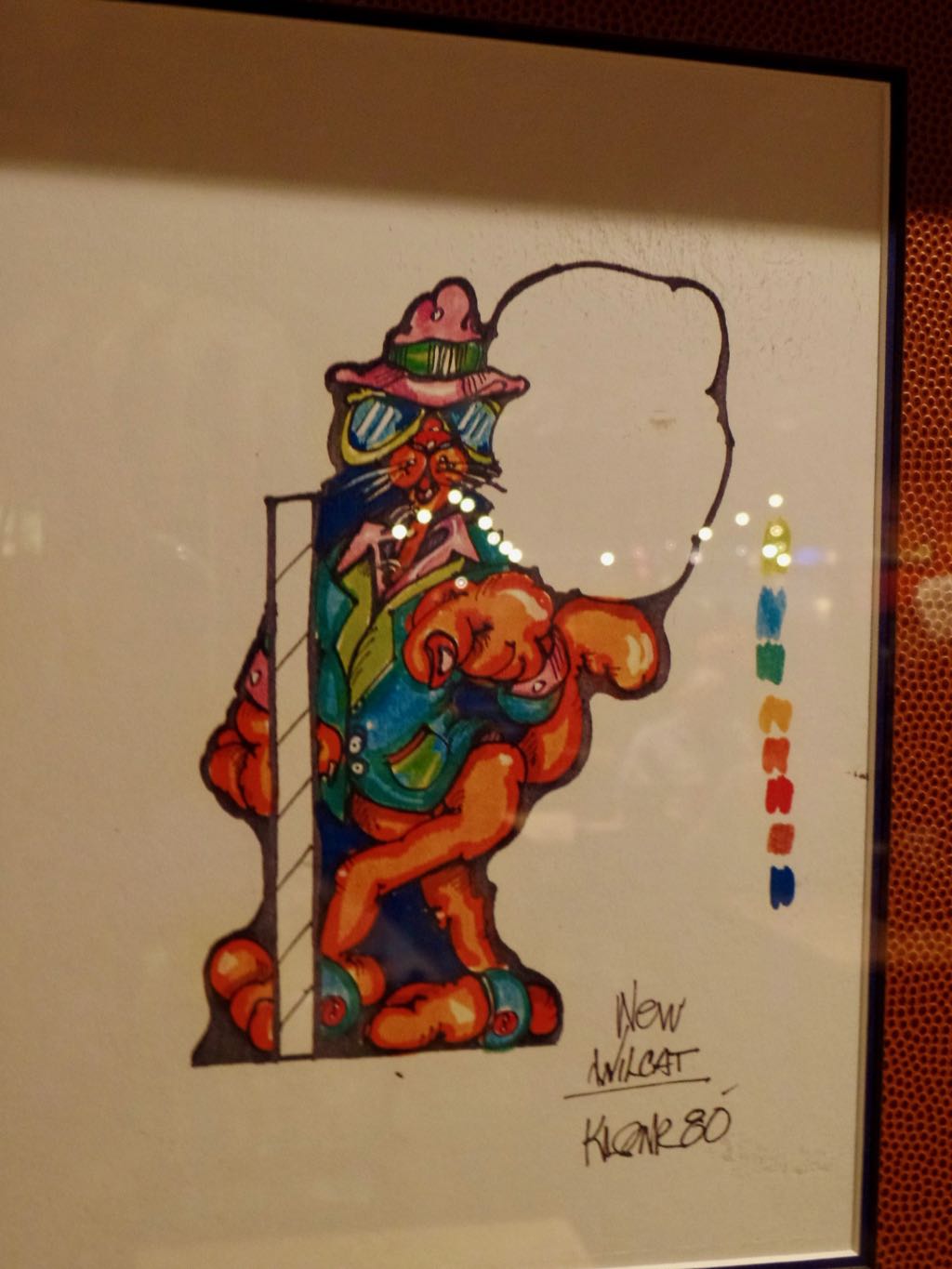 Ride sign that I'm guessing was intended for the Wildcat roller coaster. 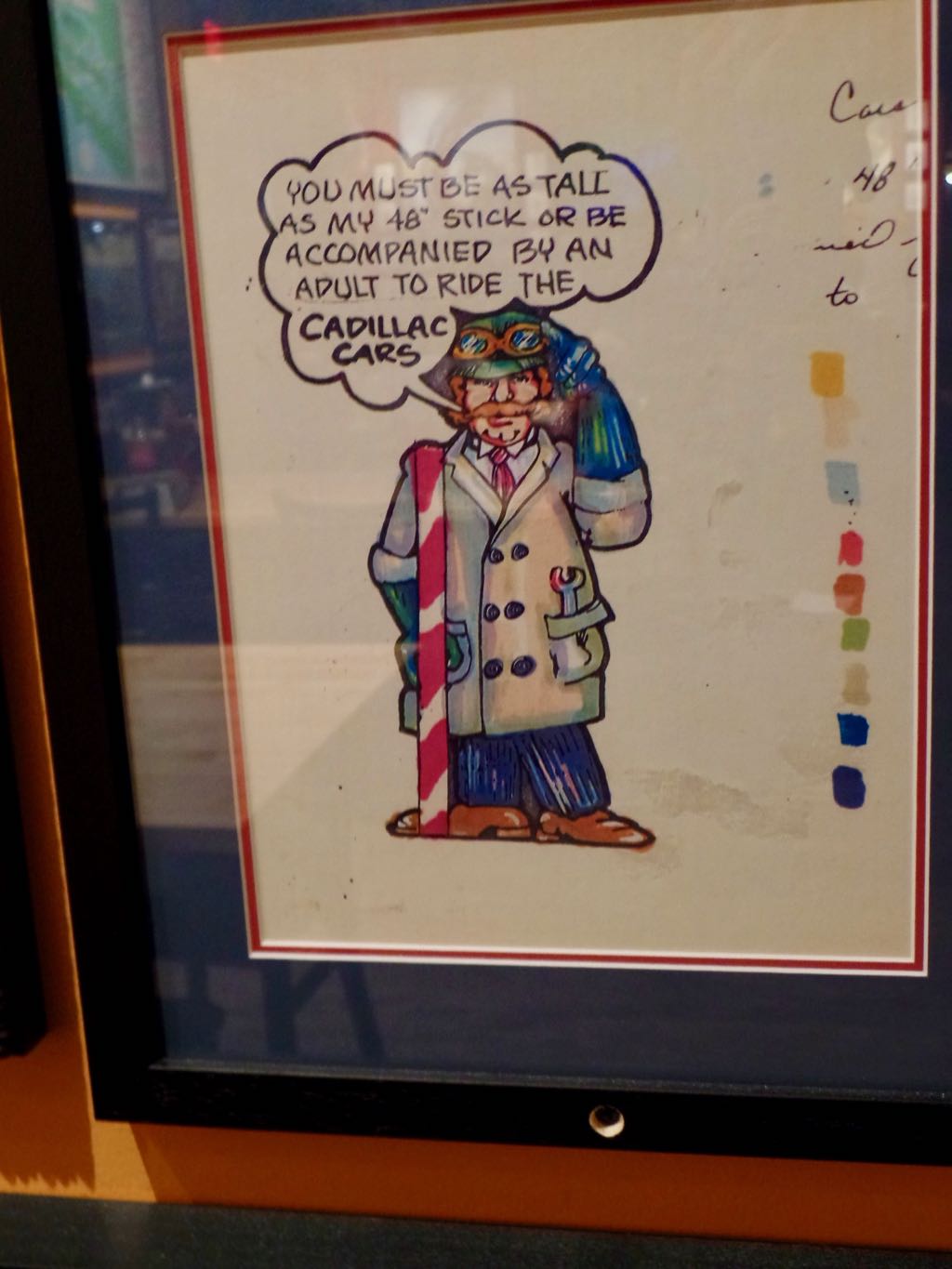 Ride sign for the Cadillac Cars, an antique-cars ride that's still there. 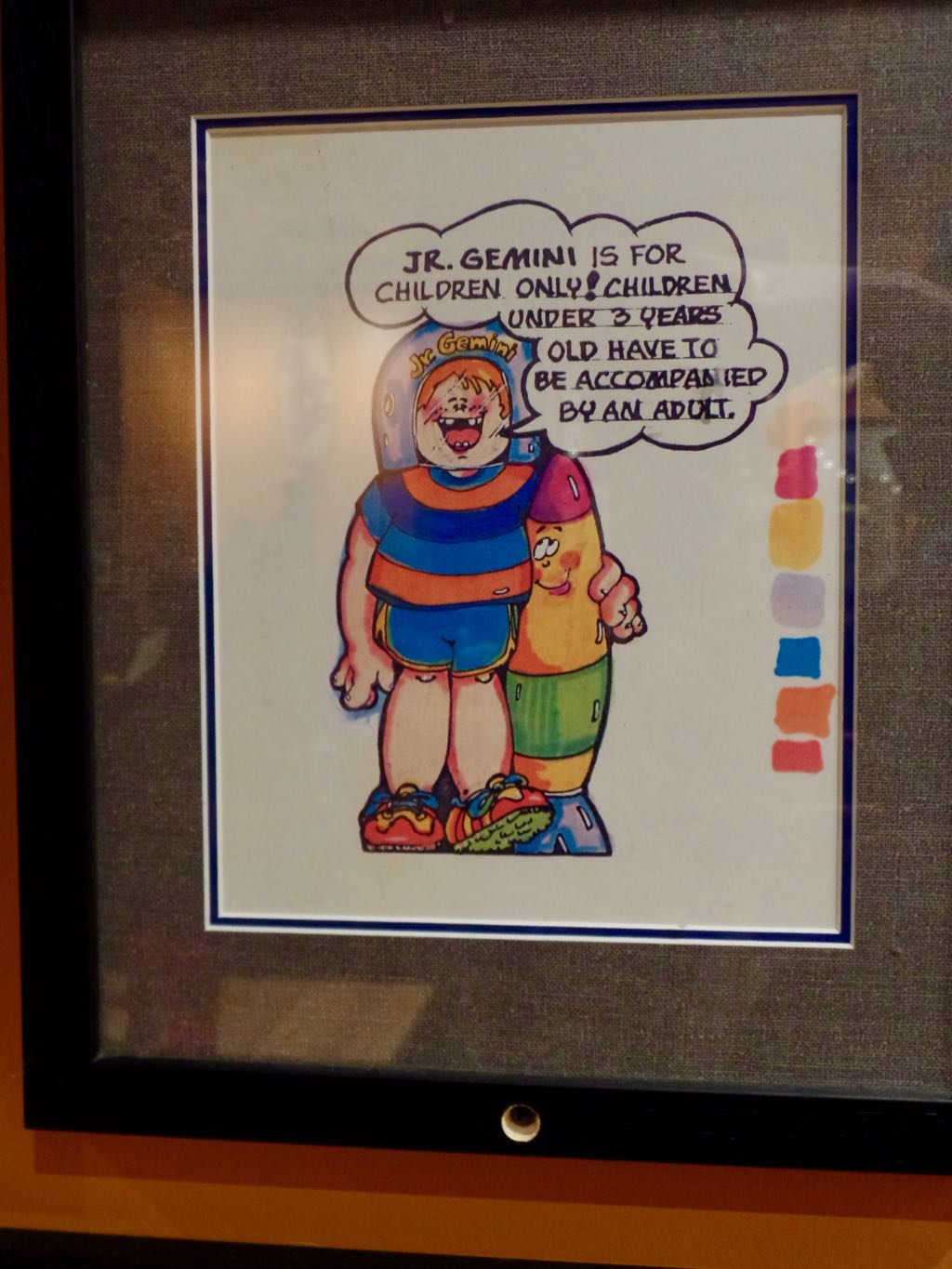 Ride sign for Junior Gemini, which is still there and still children (plus parents) only but is now named Wilderness Run, a common kiddie coaster name for Cedar Fair kiddie coasters. 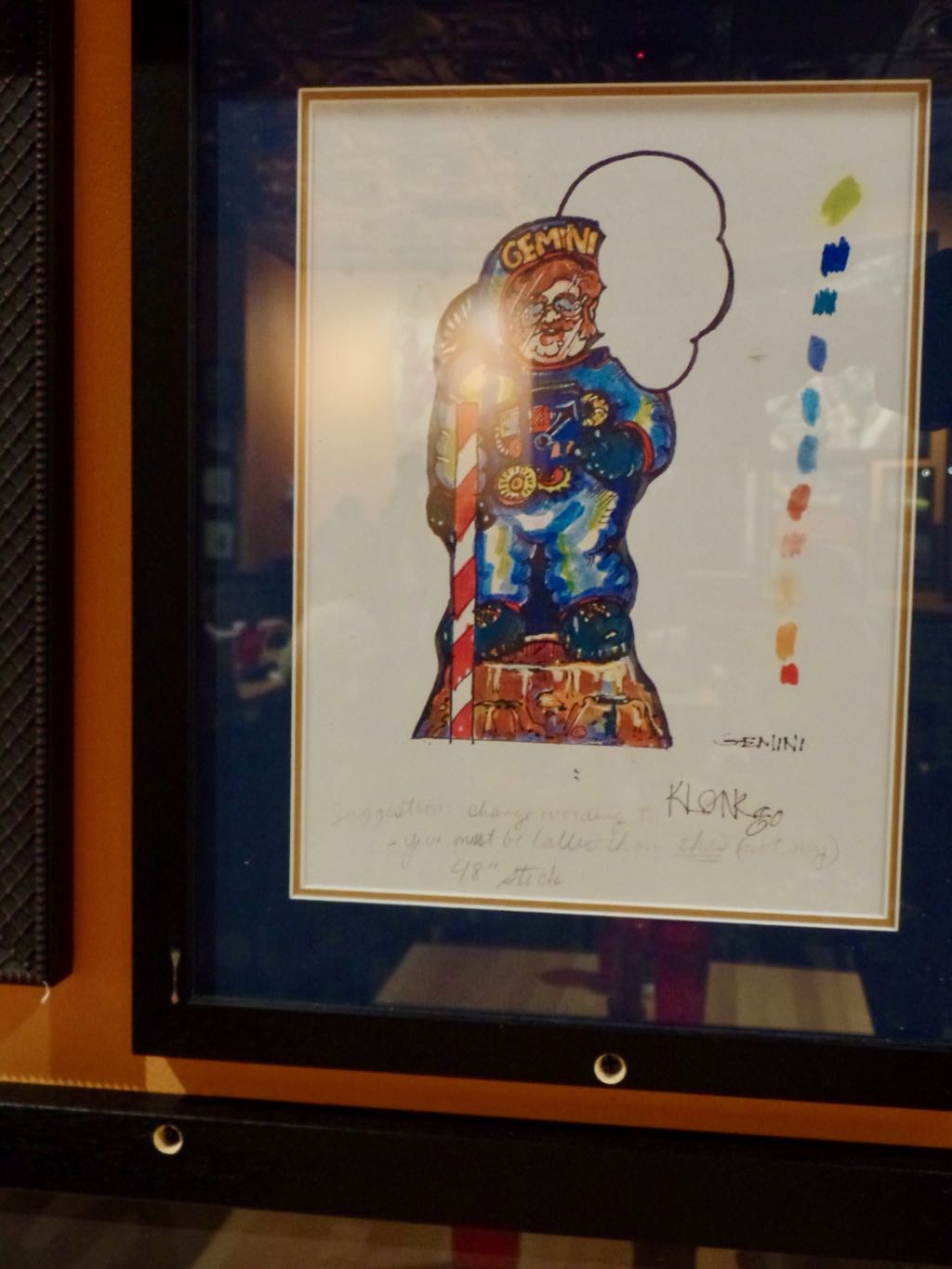 Ride sign for Gemini. The handwriting at bottom reads ``Suggestion: change writing to - you must be taller than THIS (not my) 48'' stick''.

Trivia: In Caesar's day the spring equinox was at the 25th of March; spring's treatment as beginning the 21st of March, set by the Council of Nicea, may have been an attempt to compensate for the drift in the calendar against the solar year. (The actual drift, by 325, was closer to three days than to the four shifted, though.) Source: The Calendar: The 5000-Year Struggle to Align the Clock with the Heavens --- And What Happened to the Missing Ten Days, David Ewing Duncan.

Currently Reading: Perfect Behavior, David Ogden Stewart. It's a really quite dated etiquette guide (well, it's 95 years old) and dedicated to that social set they made dopey comedies of manners about in the early 30s but there's still recognizable jokes and even premises that I could probably adapt as inspiration for my own stuff, when inspiration flags.

PS: How May 2020 Treated My Mathematics Blog, the usual sort of review.