Kiss me baby, let the fire get higher

How about we jump right to Cedar Point pictures? Sounds good. From the last operating day of 2018, a Halloweekends day ... 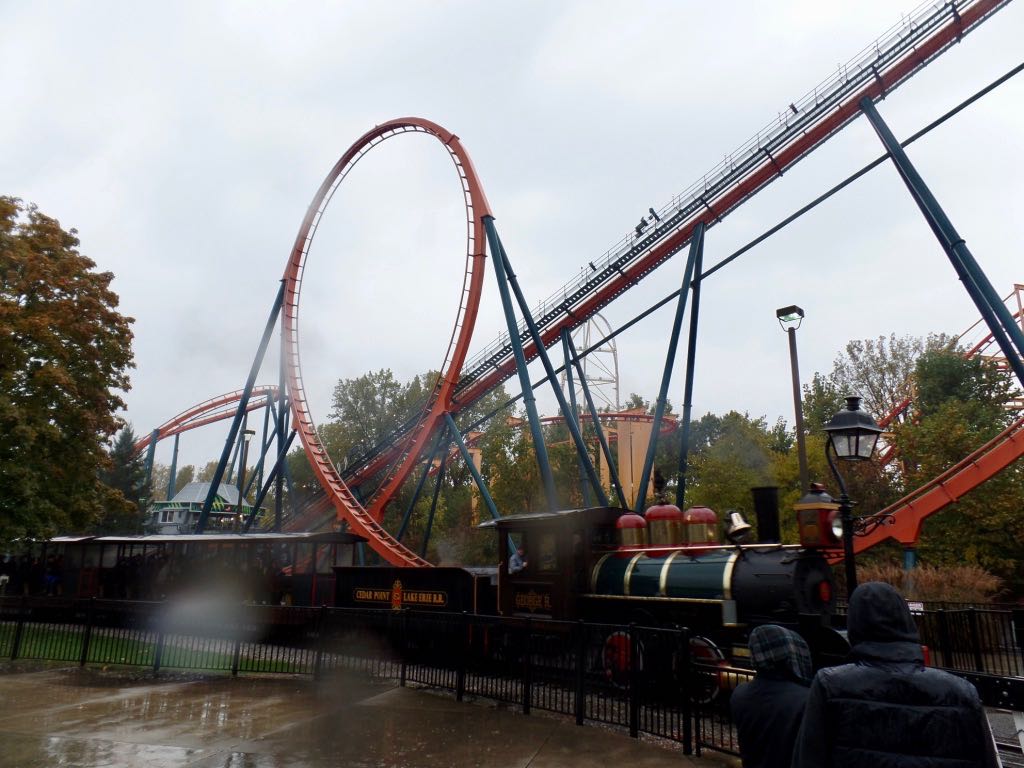 The Cedar Point and Lake Erie railroad chugging its way past Rougarou and blocking us from the front of the park temporarily. The engine is the George R, originally built for the Carbon Limestone Company of Hillsville, Pennsylvania. 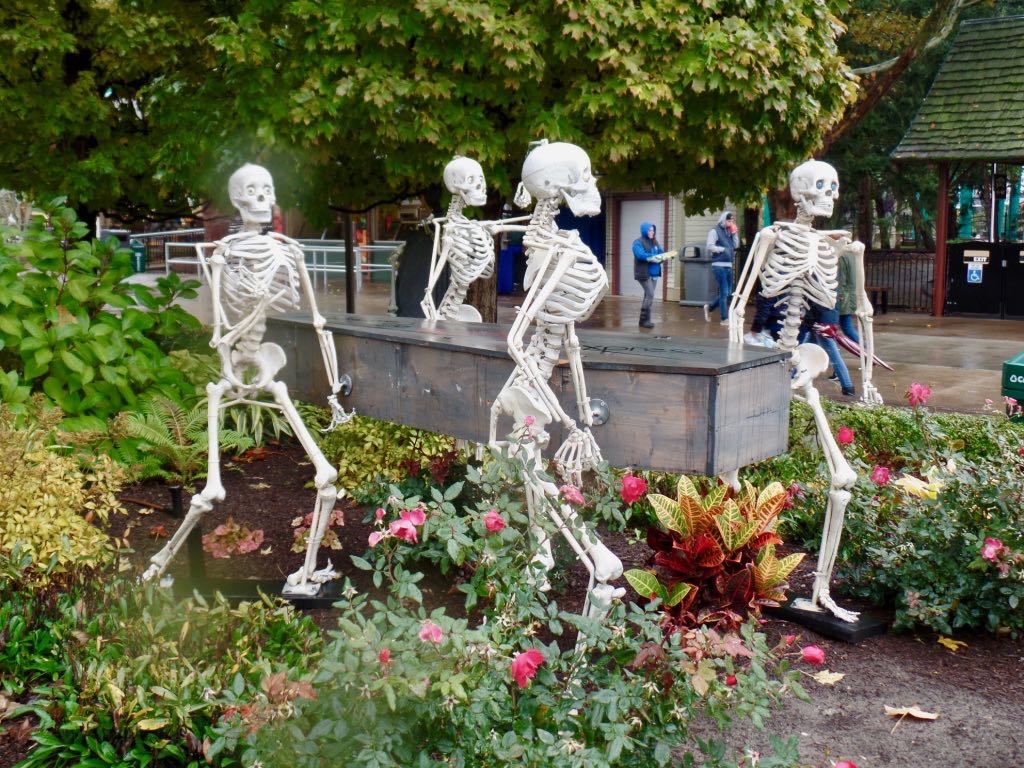 Halloweekends decoration of skeleton pallbearers. This could be a 30s cartoon scene. 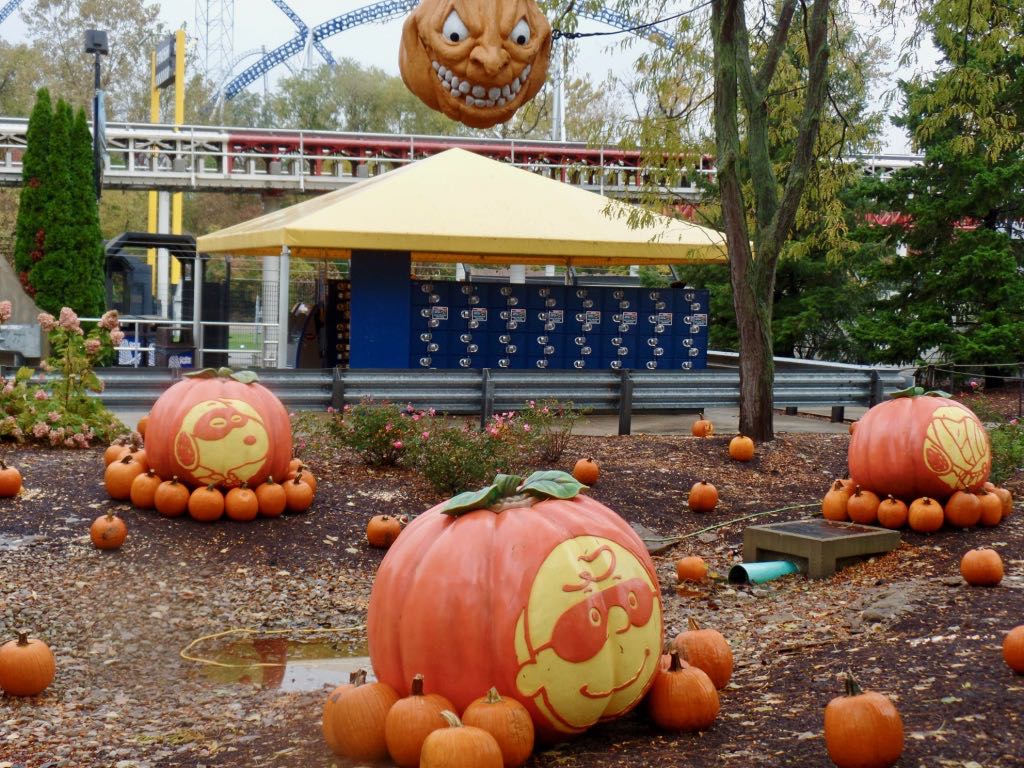 Scene from the classic special YOU'RE the Great Pumpkin, Charlie Brown?! 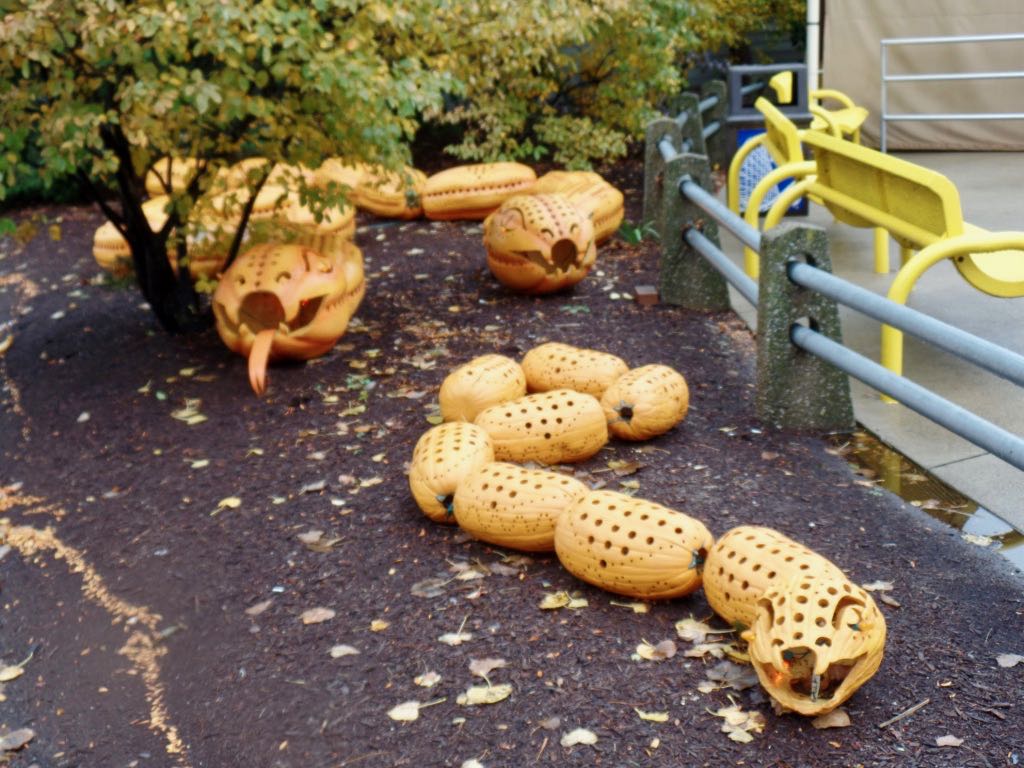 Plastic pumpkin-based snake figures that fascinate me every year, and that I keep trying to photograph, and never feel satisfied with. Note the zucchini mongoose in the background. 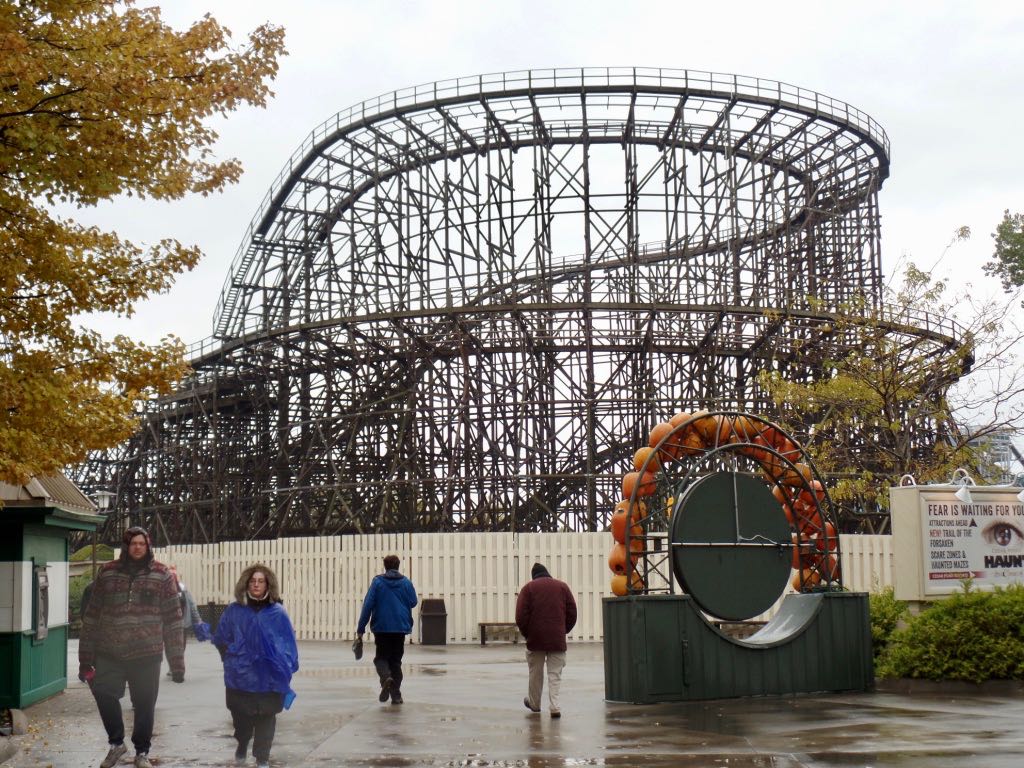 Gemini's turnaround, with the back of a sign announcing the Halloweekends parade. The sign is of the size and shape of the ride sign for Mantis/Rougarou ... except that Rougarou still has its ride sign on a mount just like this. So it's a duplicate or something? 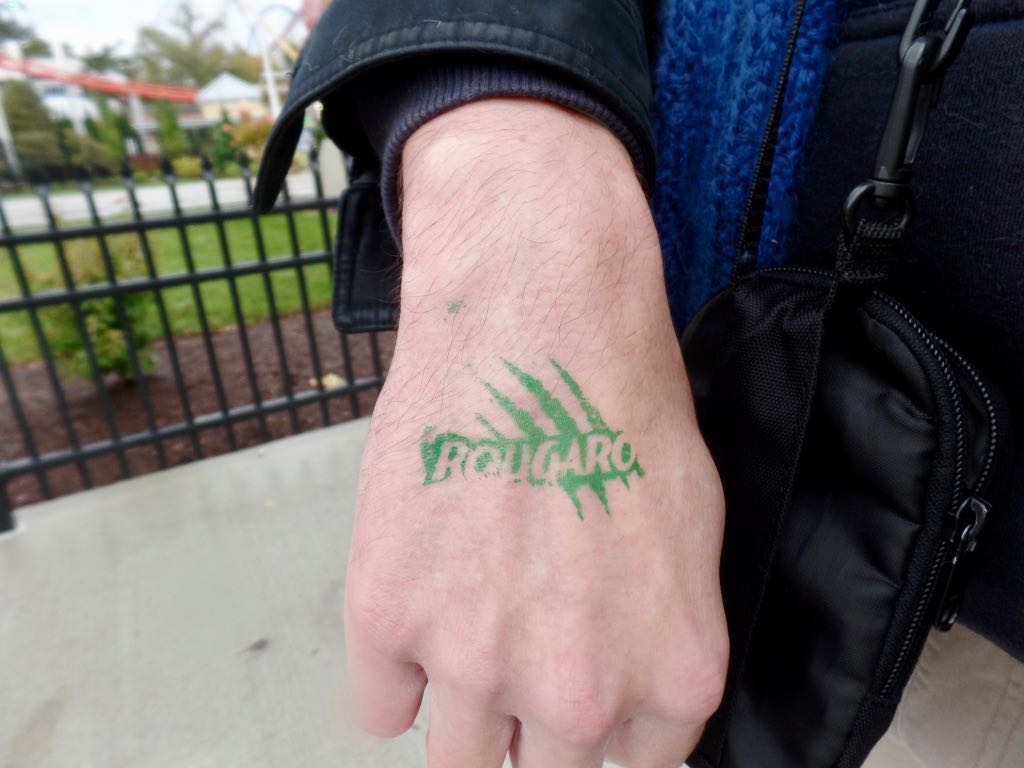 That day's hand stamp for park reentry. We'd gotten some souvenirs and stowed them in the car. 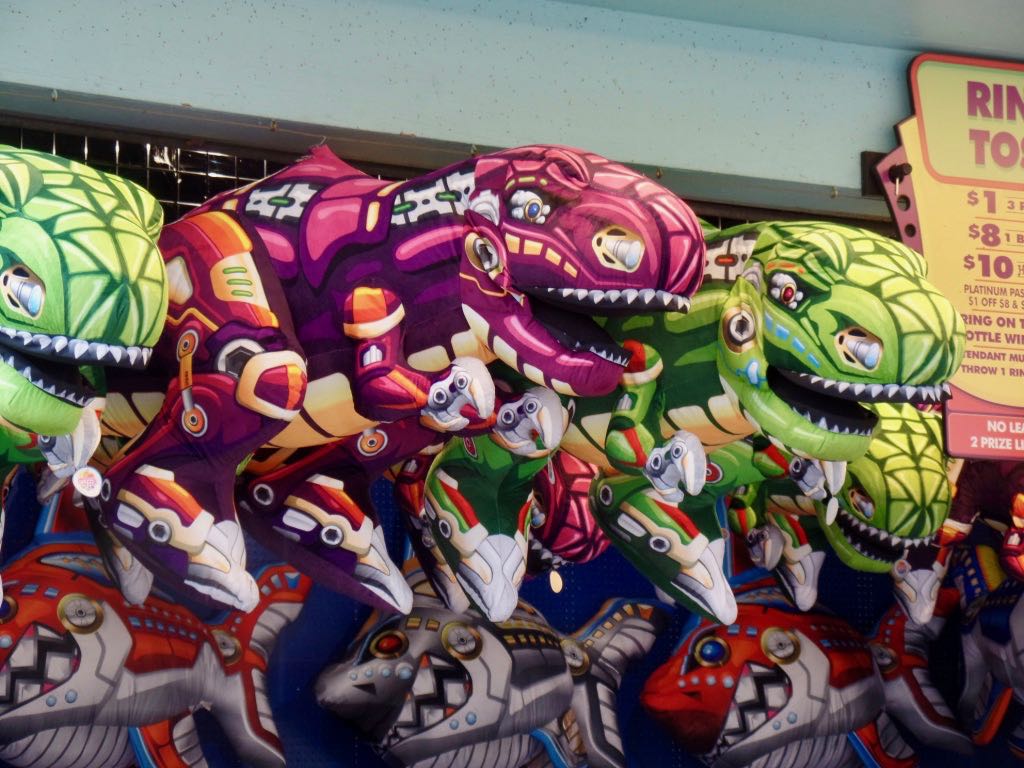 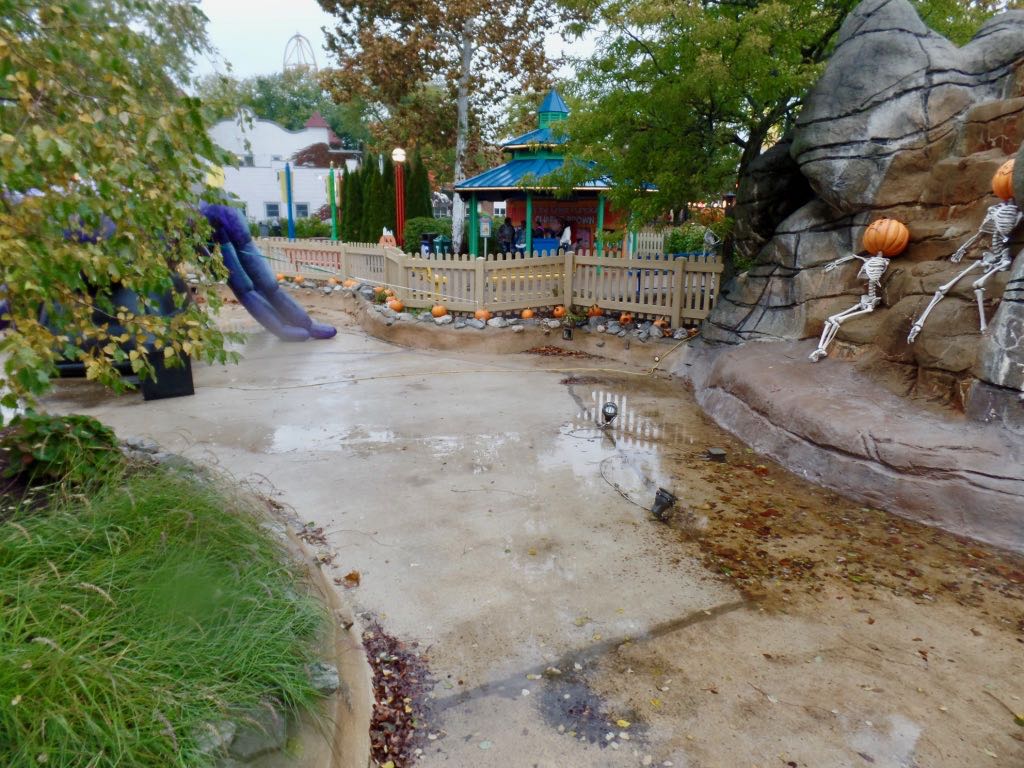 One of the Peanuts themed areas --- I think Planet Snoopy --- with the water attraction drained and decorations put in its place. Dig those pumpkin-head skeletons lounging on the rocks. 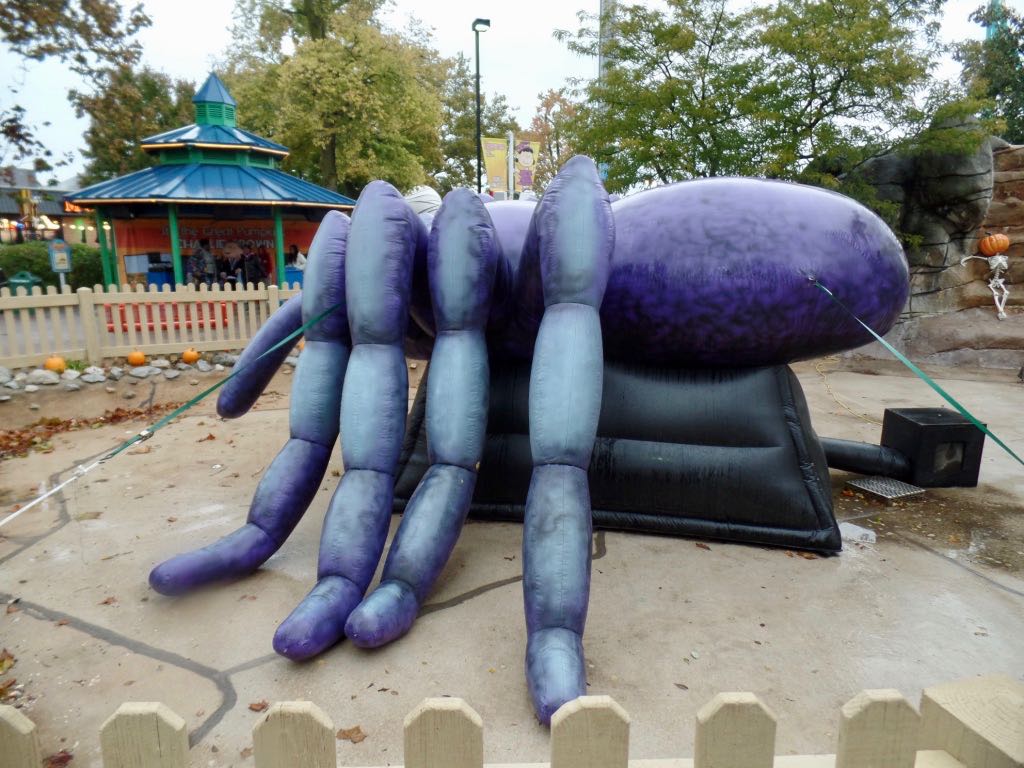 This large and probably inflated spider used to be a regular part of the Halloweekends parade. 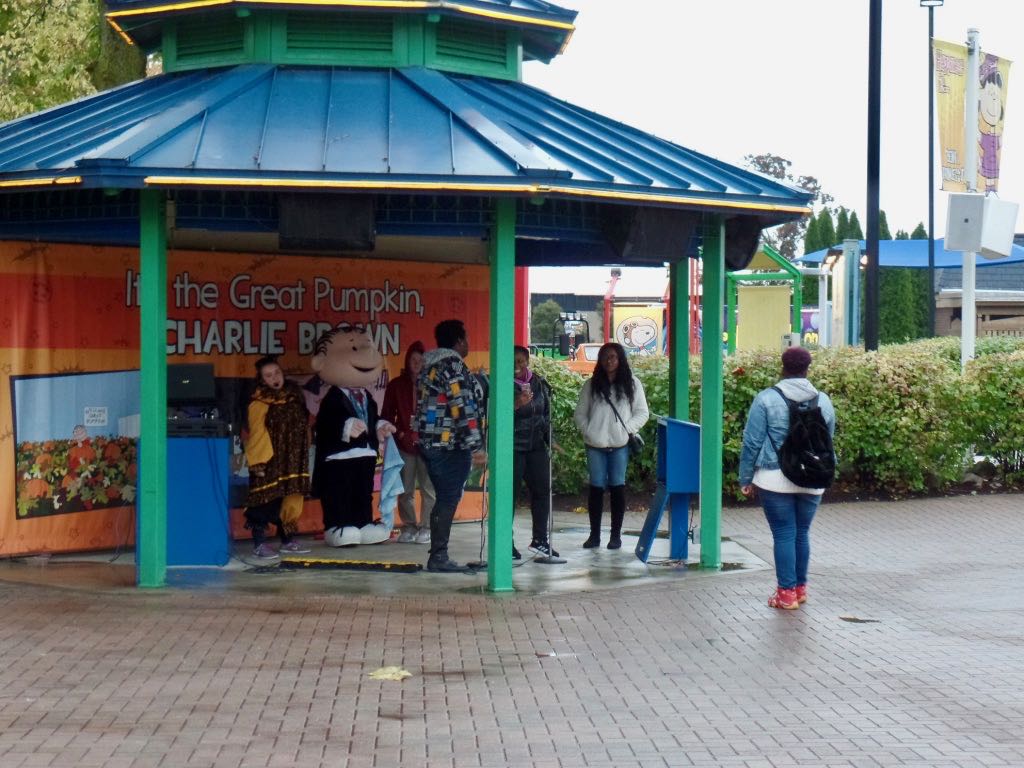 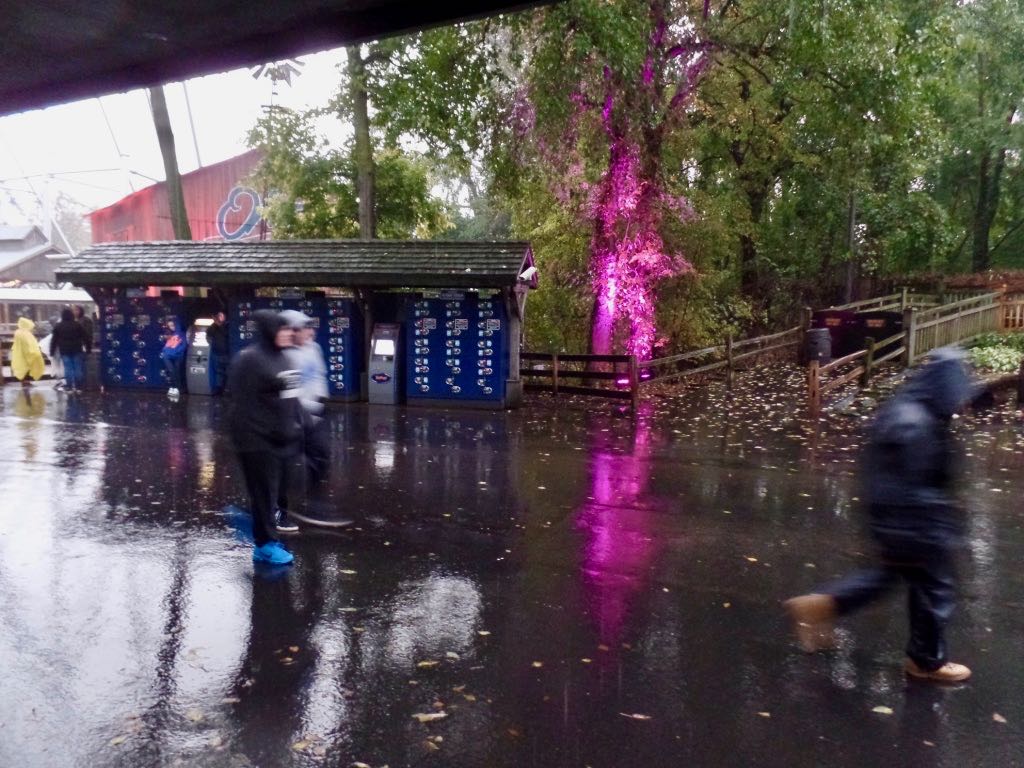 There's always one tree on the Frontier Trail that lights up for night first. 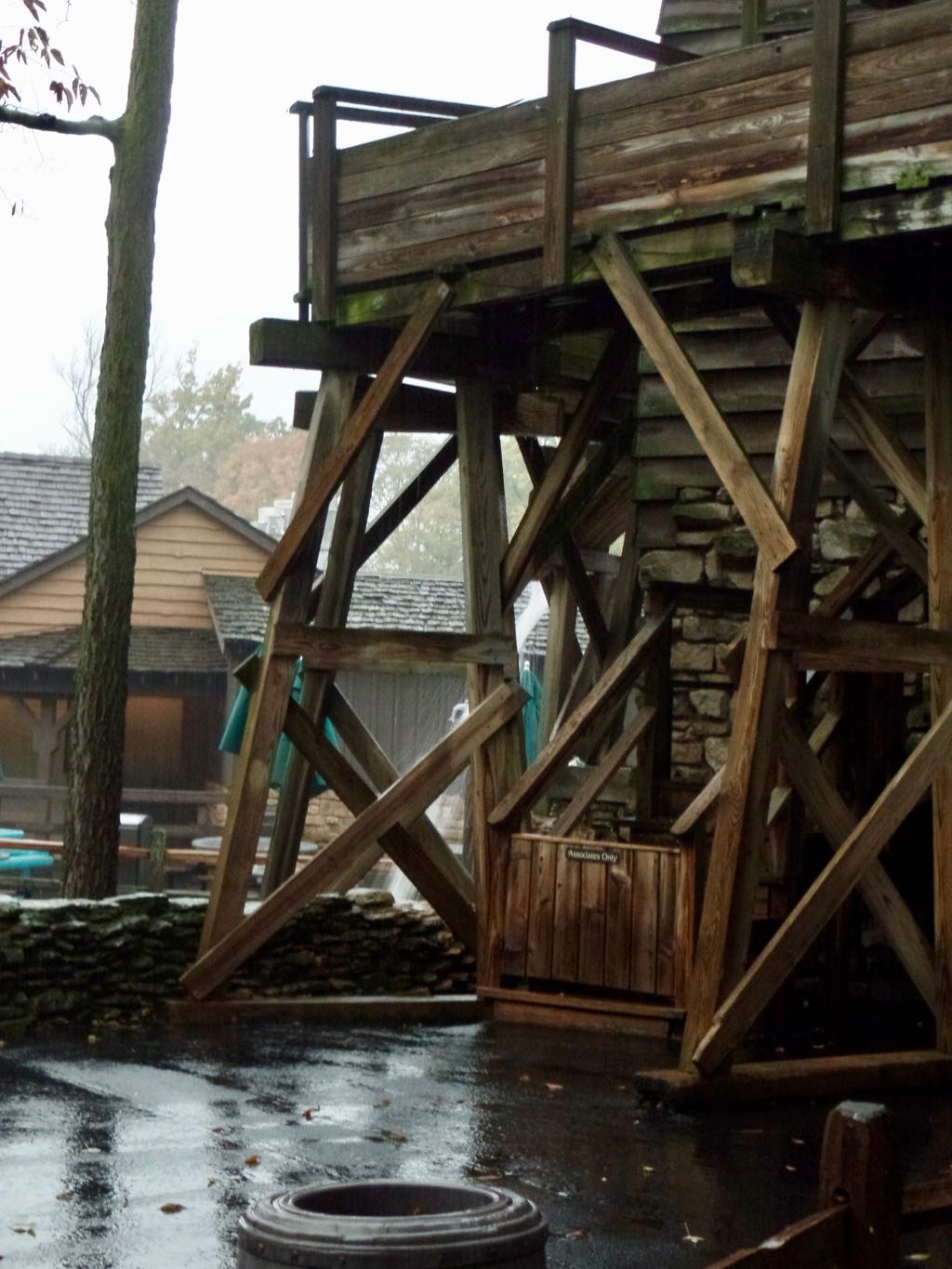 You ever notice this grist mill on the Frontier Trail before? We hadn't, so we figured to take a serious look. 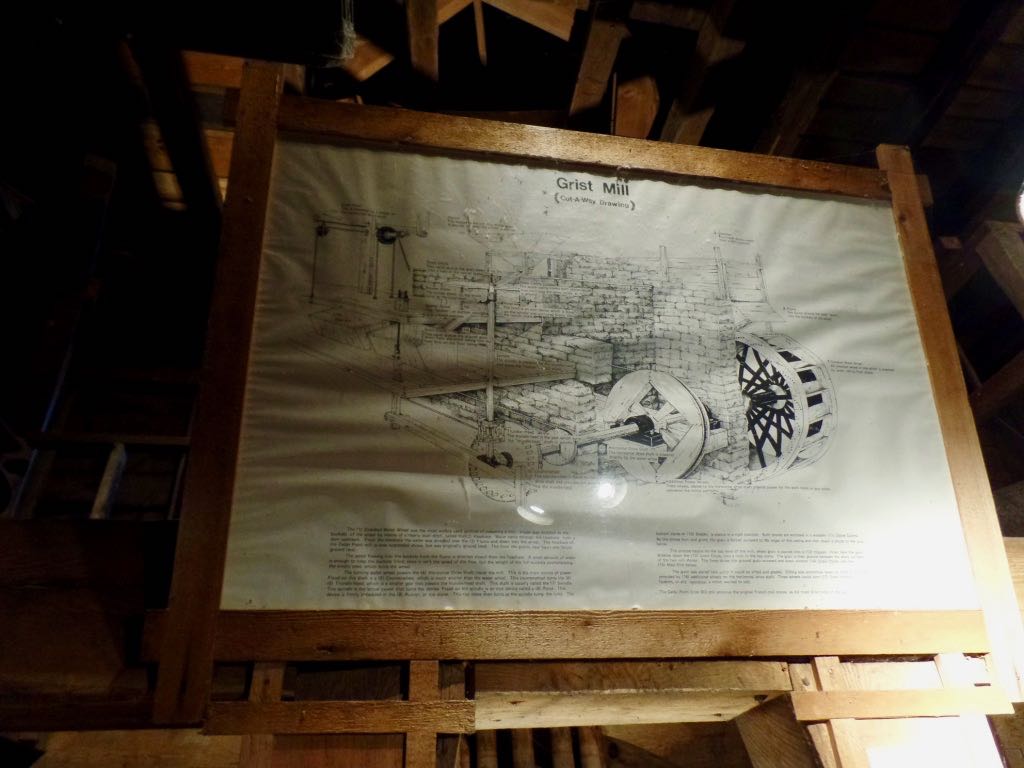 Interior diagram showing off the grist mill in fine enough detail that I'm not sure it was close enough for my eyes to make out any of the text. 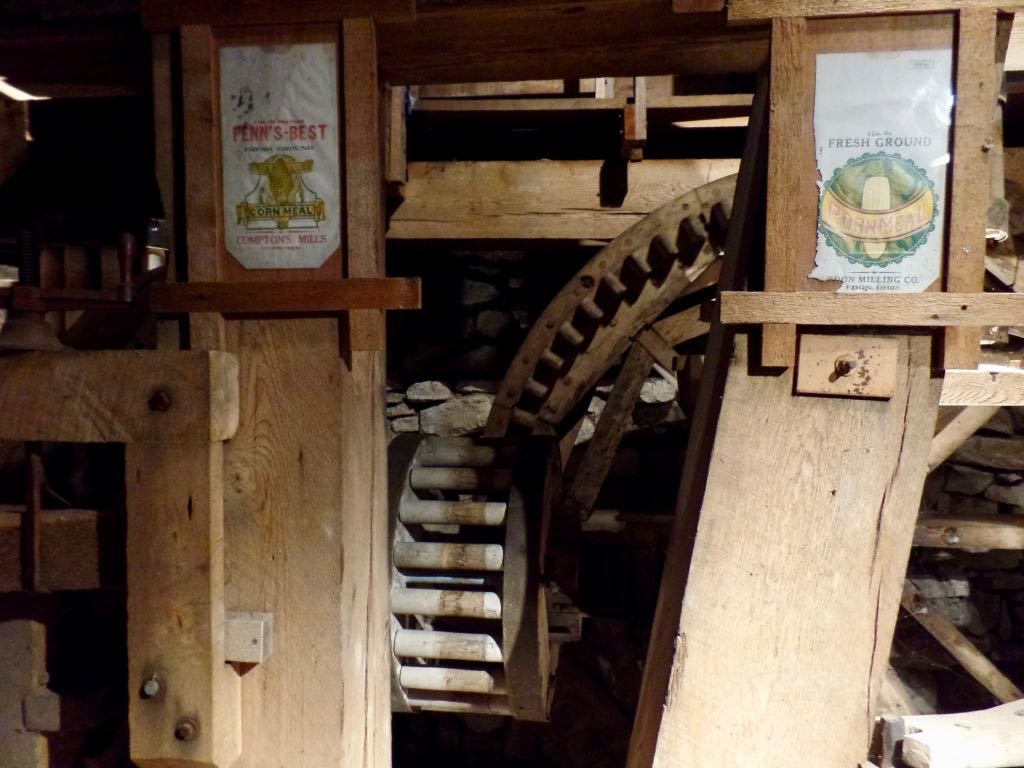 Parts of the mill, featuring bags from Ohio-area mills. I'm assuming that Penn's Best took that name because they wanted some of that Quaker cachet. (Quakers having a deserved reputation for reliability and value.) 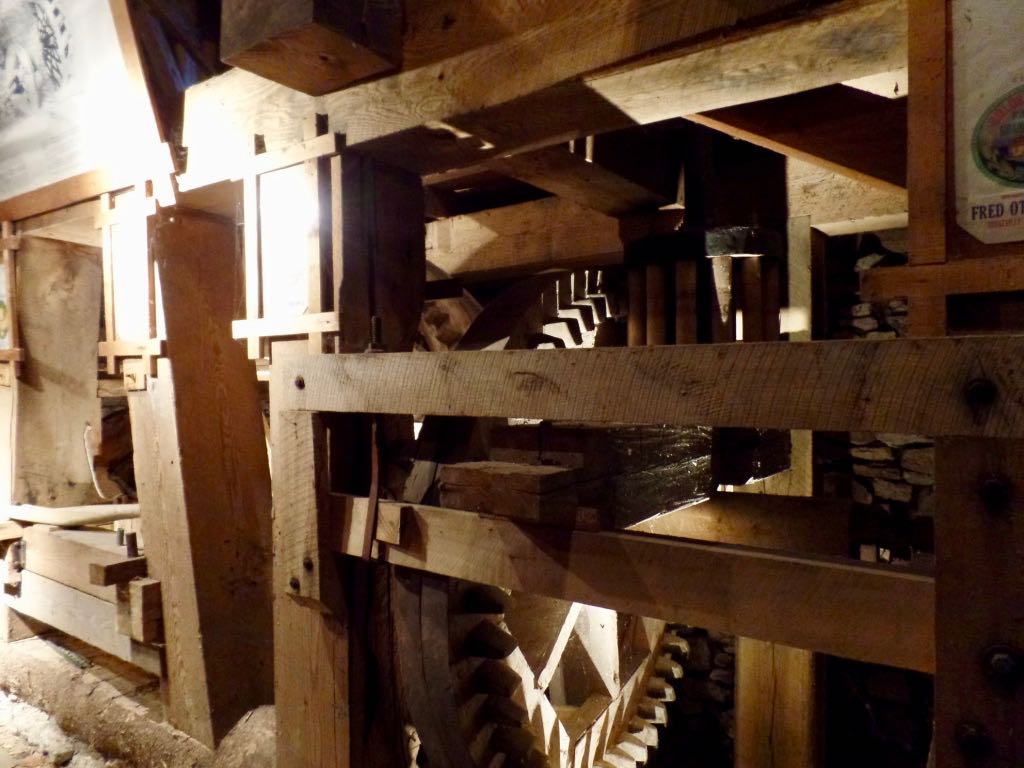 Peeking through slats to see the great wheels and cogs and slowly turning mechanisms. 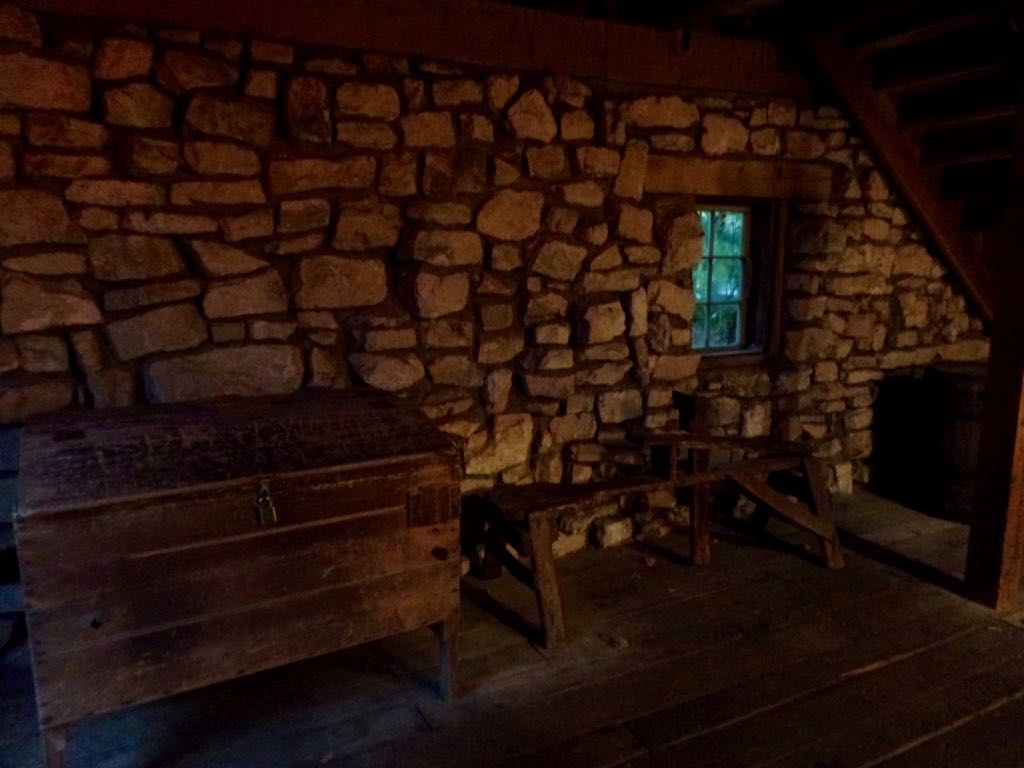 Fieldstone (?) wall that makes up part of the working space of the grist mill.

Trivia: American cookbooks of the late 19th century recommended sprucing up leftovers by tossing in some curry powder and some cream or stock. Source: Eight Flavors: The Untold Story of American Cuisine, Sarah Lohman.