Walking in a winter wonderland

Let me now wrap up pictures from the 2018 Silver Bells in the City parade. This includes the end of the parade and some walking around downtown afterwards, taking in the sights. 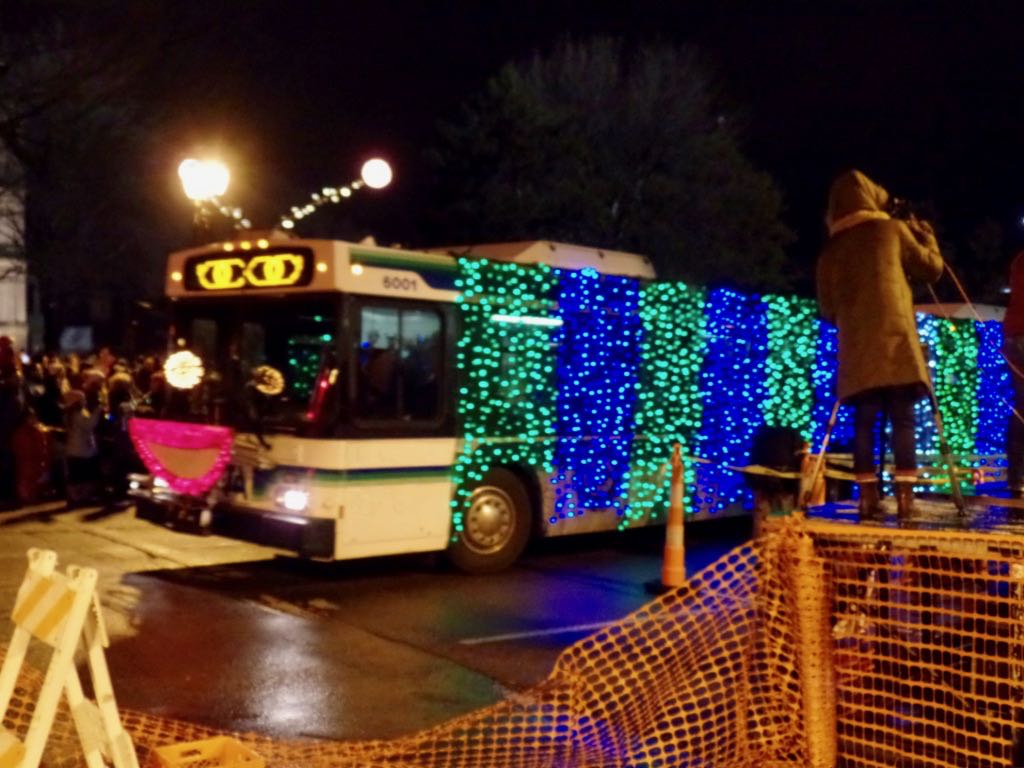 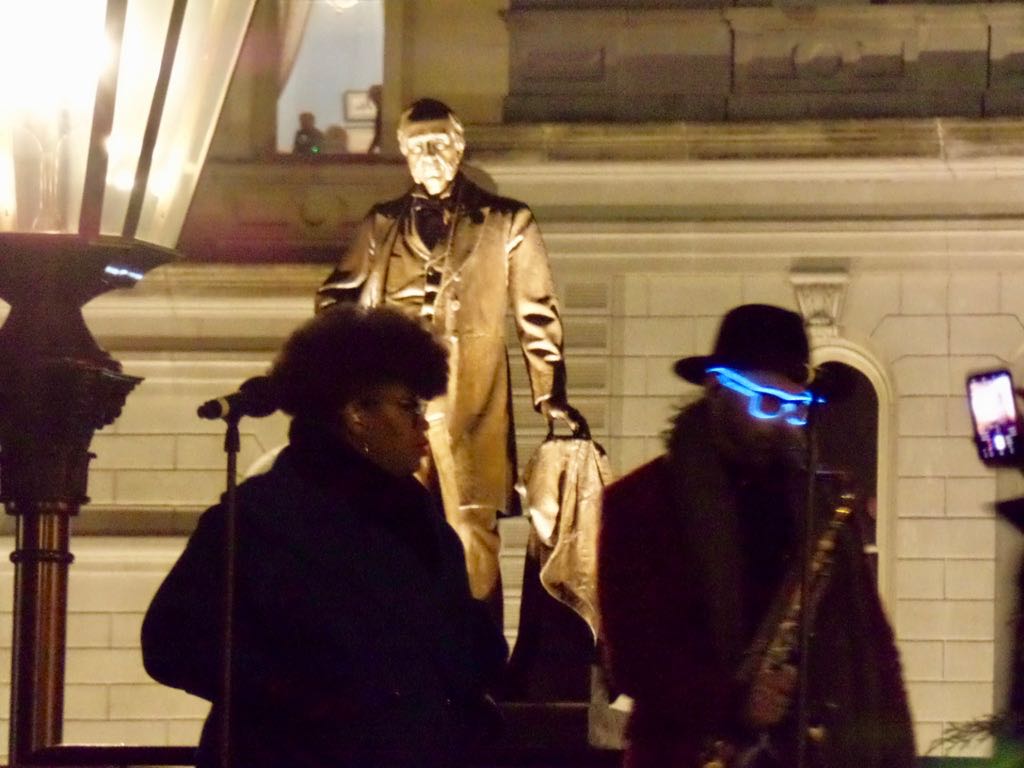 Singer and saxophonist leading the group song, here in front of the statue of Austin Blair, Civil War-era governor of Michigan. 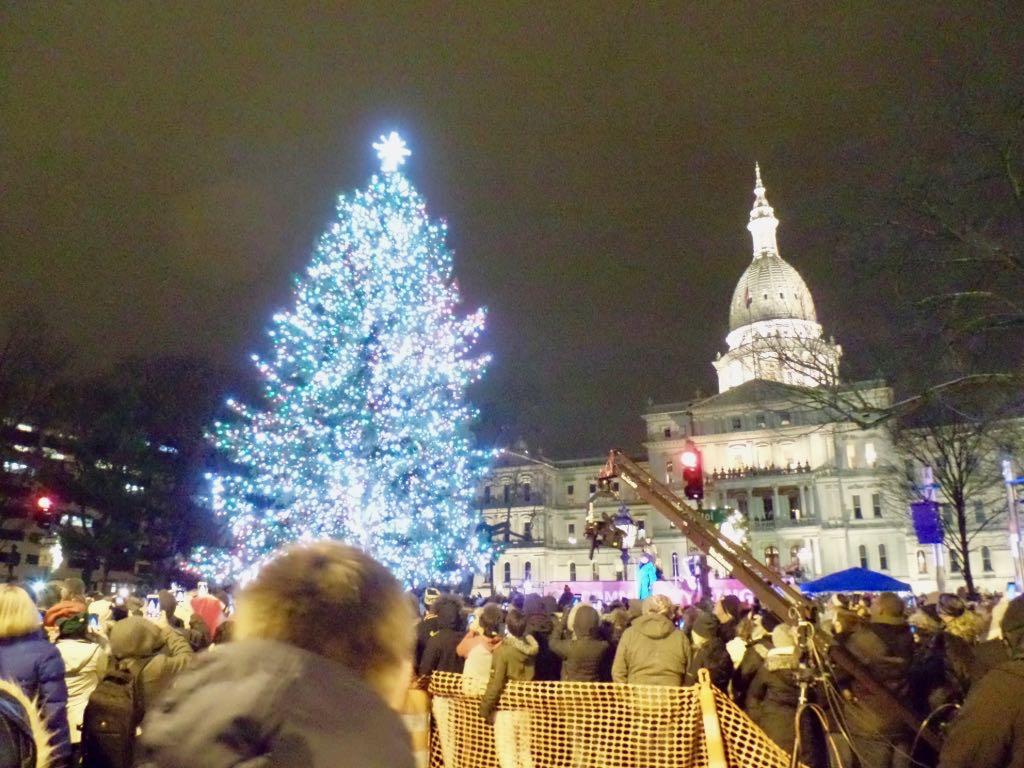 And the tree is lit! ... Sad to say there were no fireworks this year, because it would interfere with some construction work somehow. 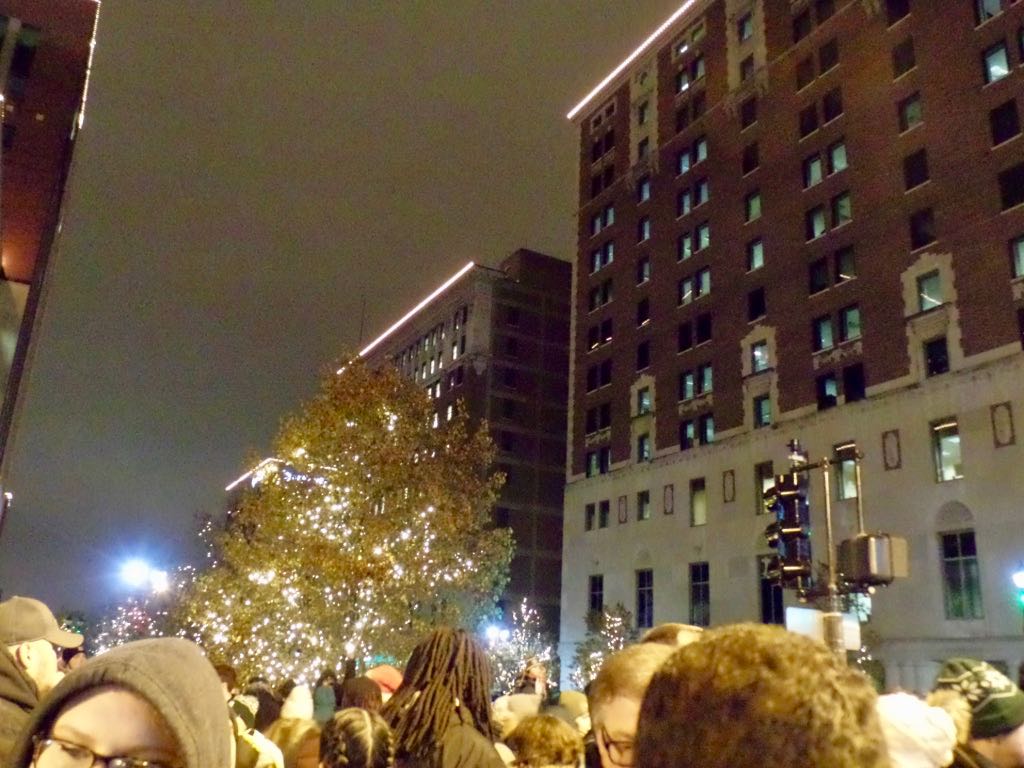 Looking back down Michigan Avenue away from the capitol; there's other, smaller trees decorated, as are buildings throughout downtown. 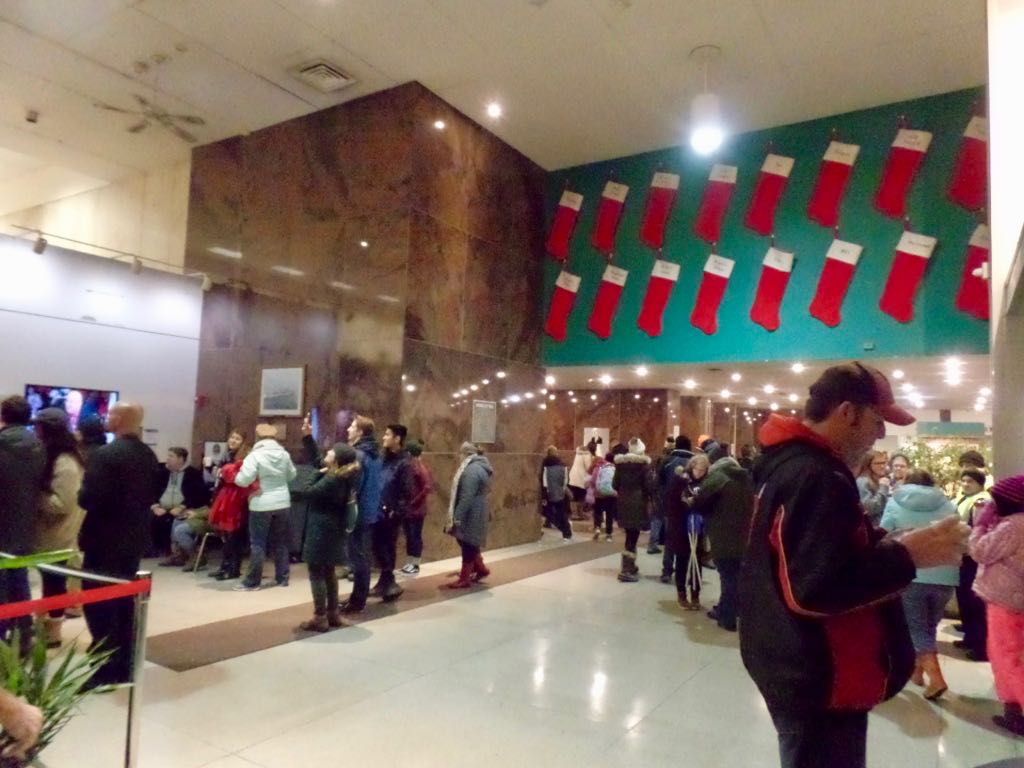 Here's the interior of City Hall. The stockings represent each of the city government departments. 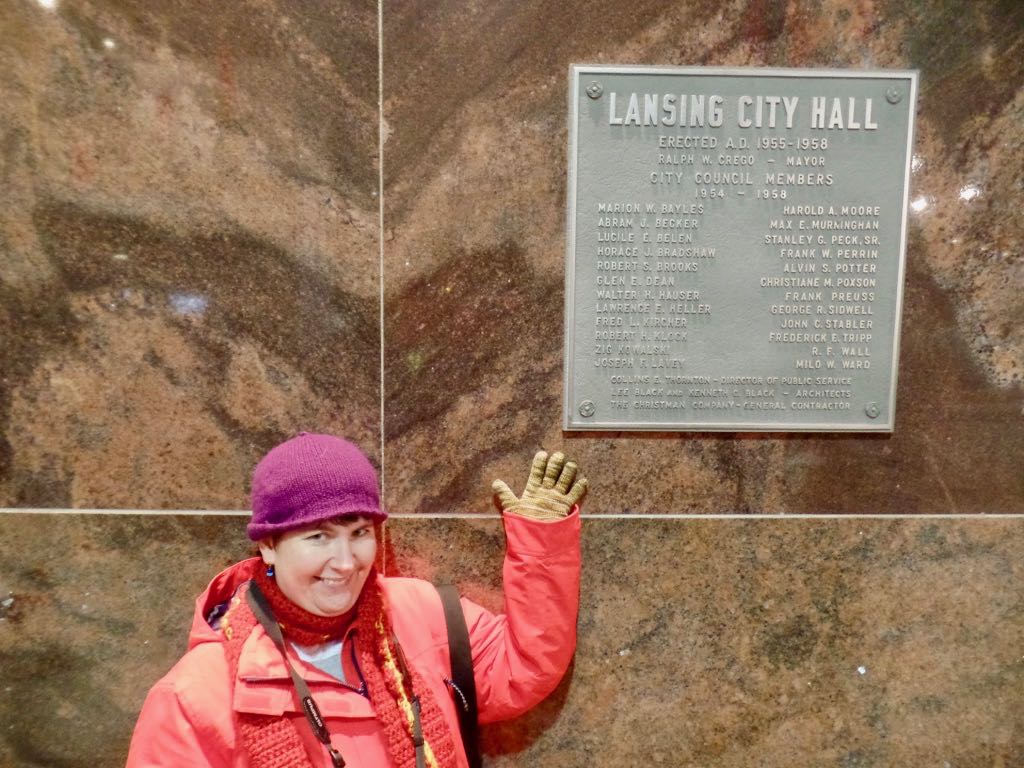 bunny_hugger shows off the plaque commemorating City Hall's construction. Ralph W Crego was mayor for about 580 years, and was finally commemorated with a city park that was closed as unsafe due to environmental hazards for years. (It finally opened a couple years ago and is, also, in walking distance.) 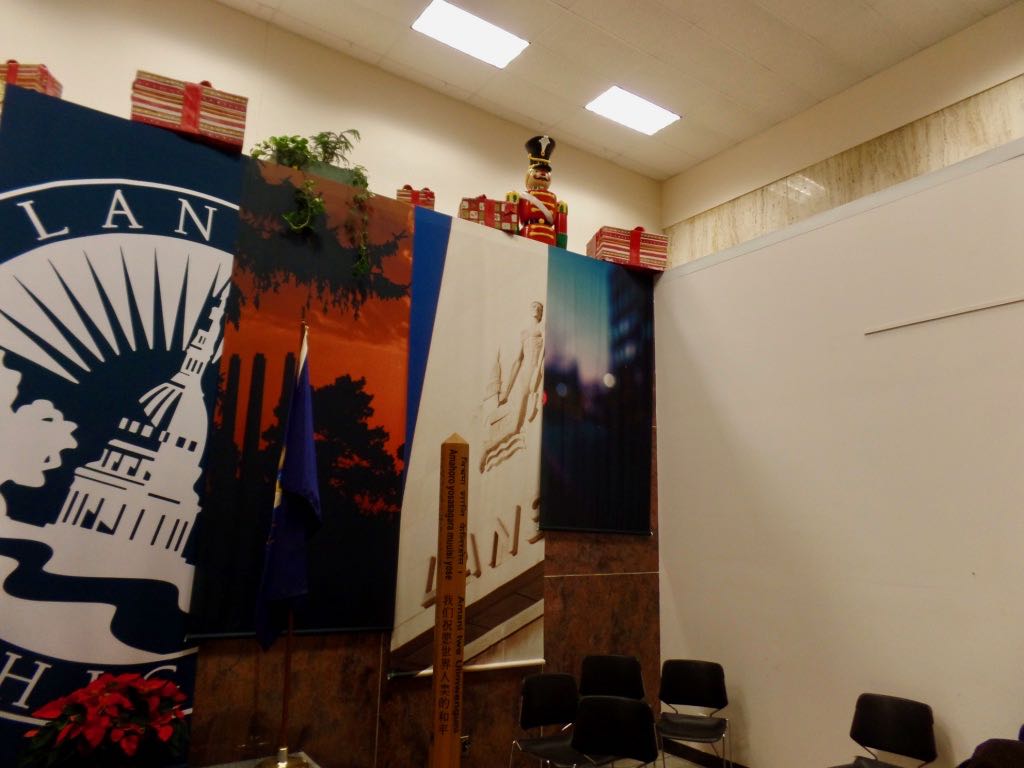 Ceiling Nutcracker is watching you Christmas! 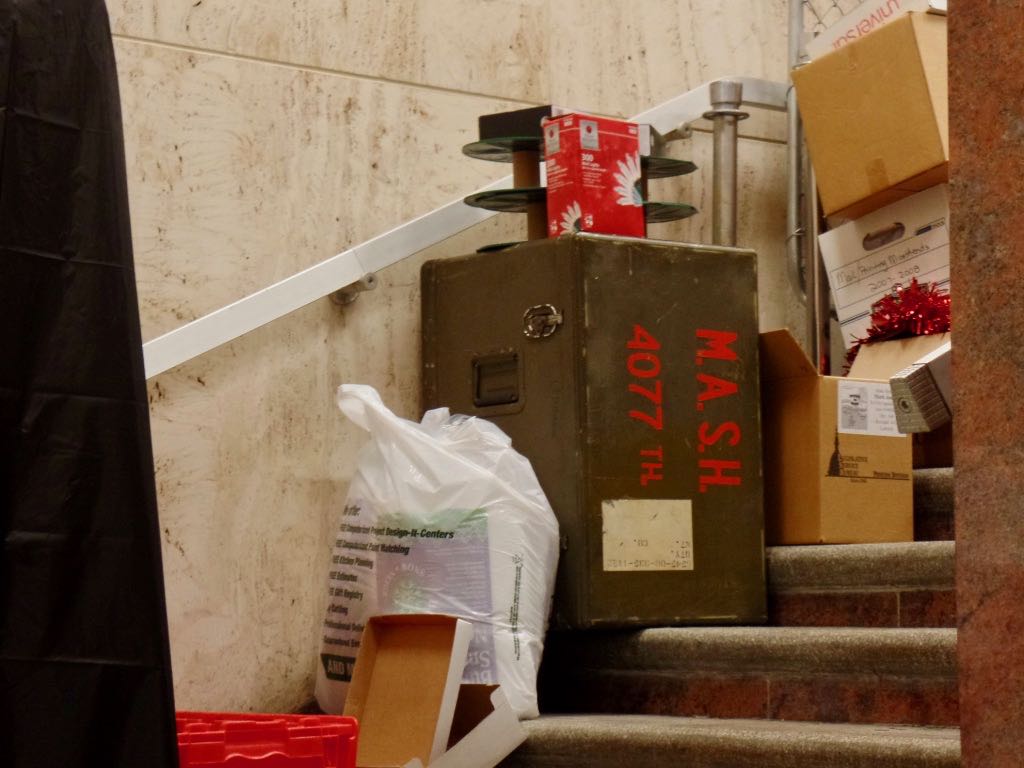 Miscellaneous boxes of things piled up on City Hall steps that are roped off and ... why is a trunk labelled as if it were part of the show M*A*S*H? We have no idea. 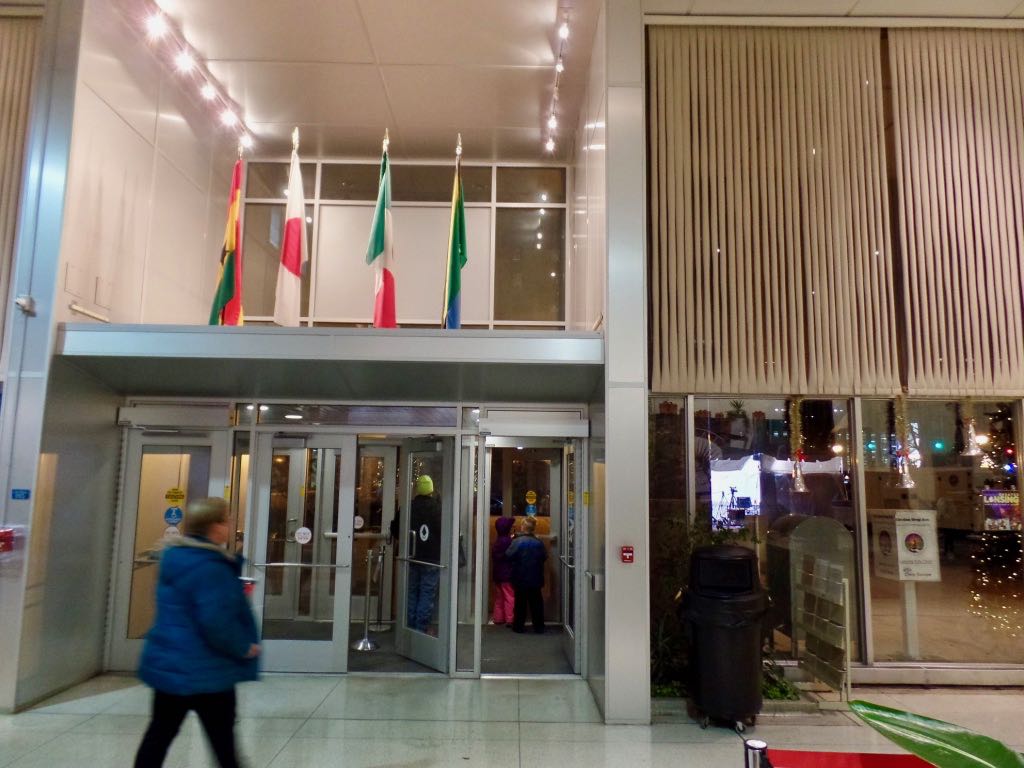 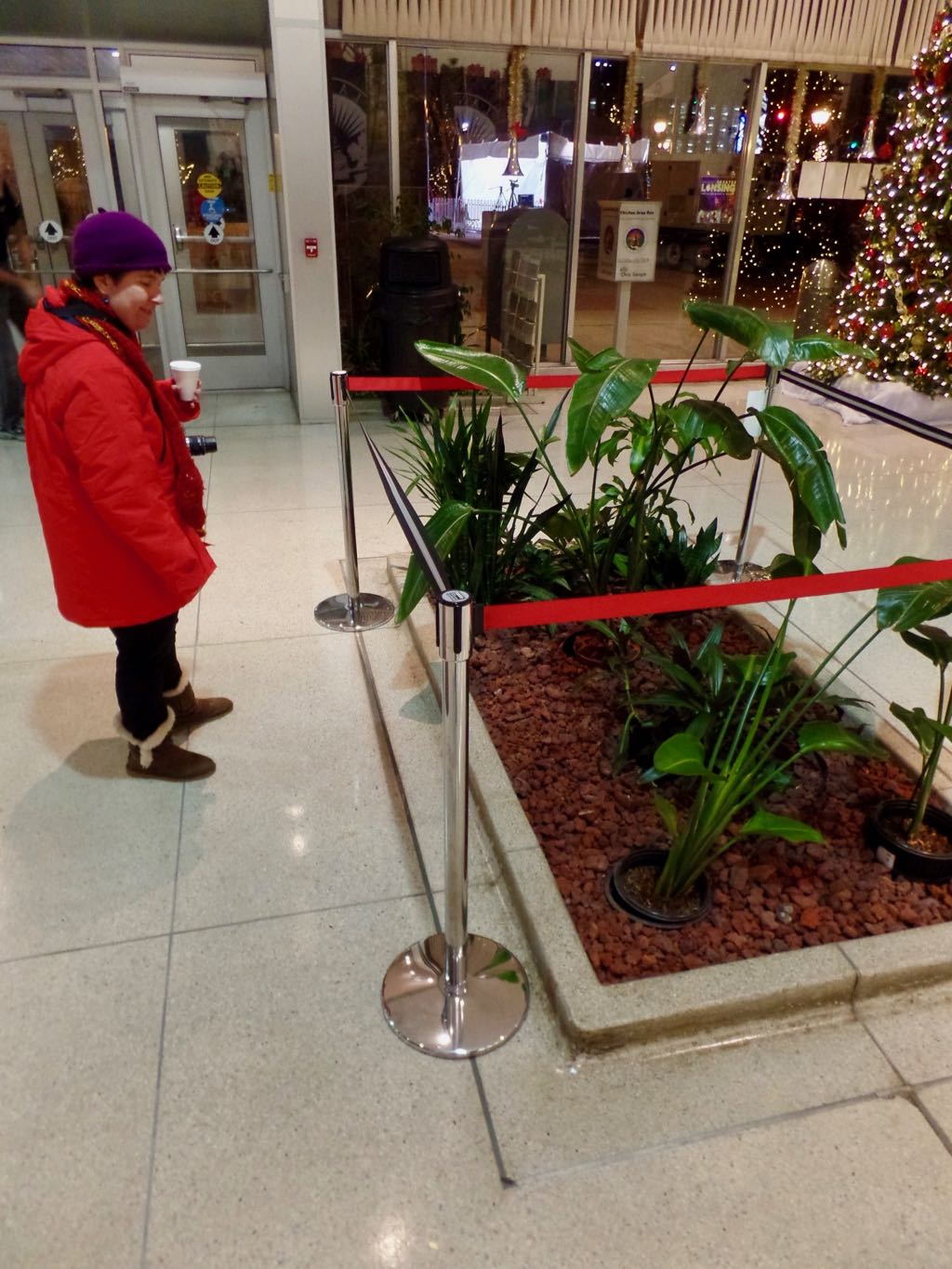 bunny_hugger admires the low-wall planter that's a handsome bit of Modernist styling for the lobby and probably, honestly, a bad idea for accessibile building design. It's got to be very easy for people to trip on that and is probably why it's roped off. 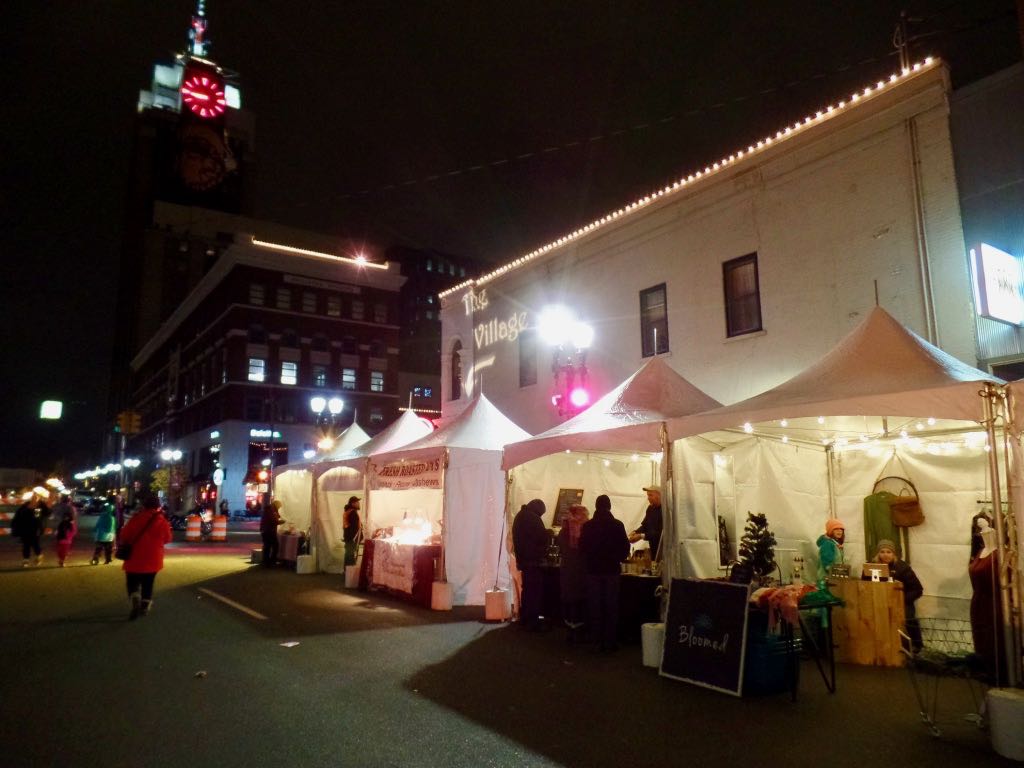 And outside there's The Village, featuring little shops set up for the event. (This was what Silver Bells in the City started out as.) We were there late, as we almost always seem to be, so stuff was wrapping up. 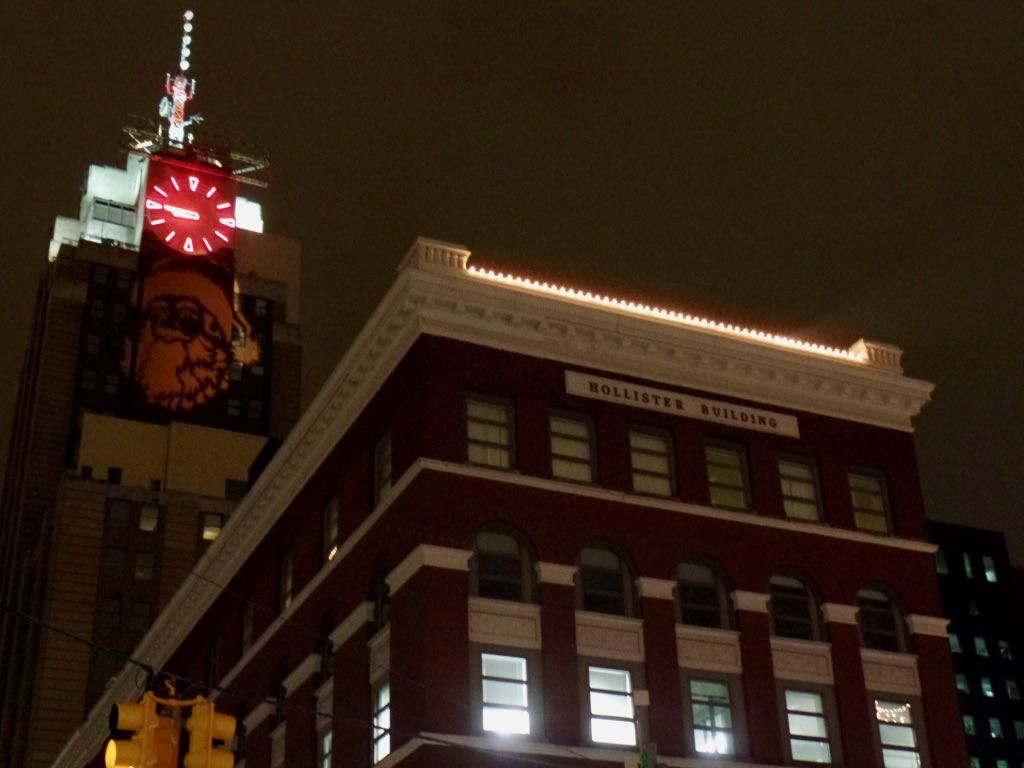 View of the Boji Tower, tallest building in Lansing (and formerly the Olds Tower), with Santa's image projected on it. 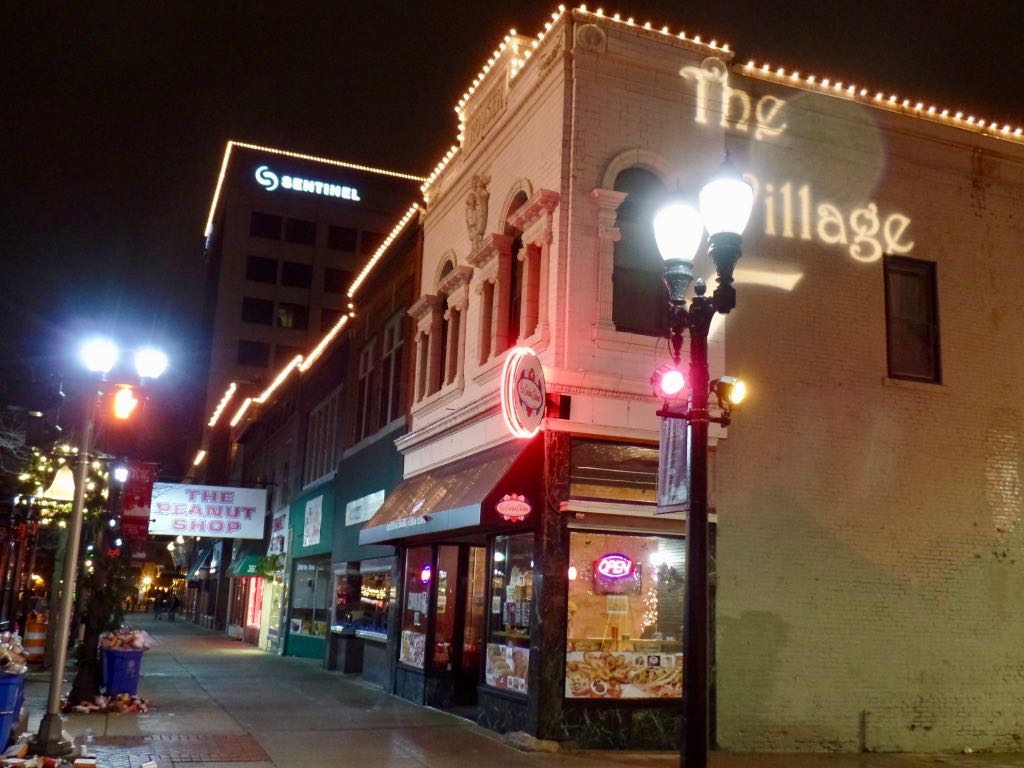 Peering out around the corner of The Village to see the Peanut Shop, which is exactly what it promises. 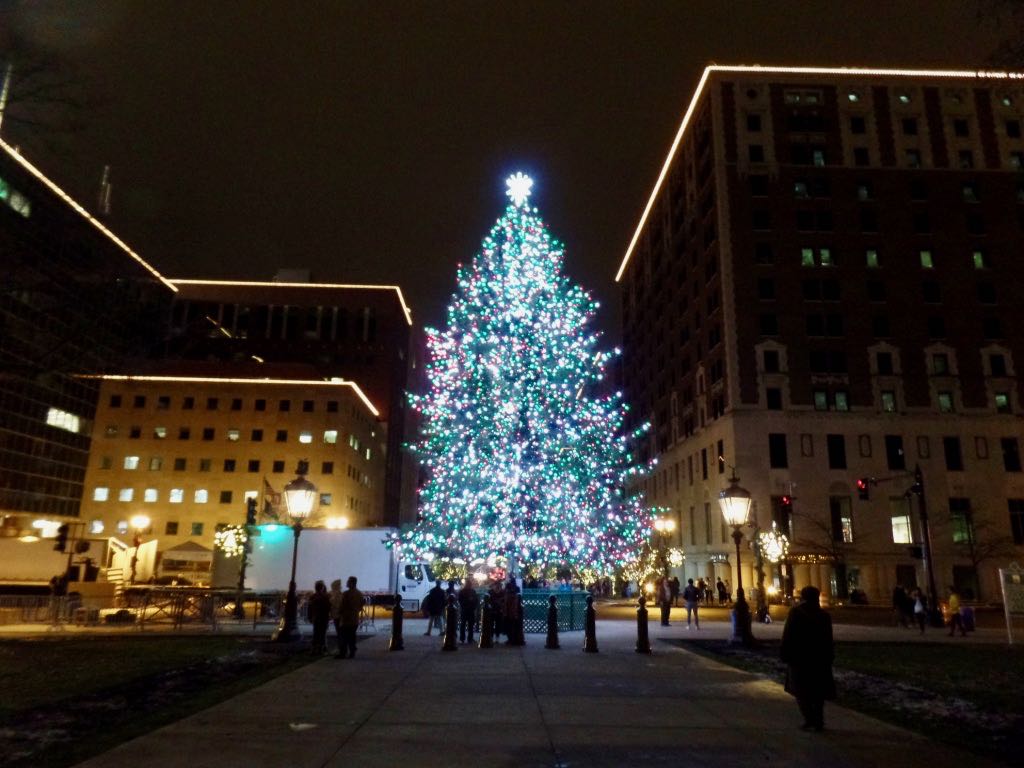 And here we see the State Tree, as viewed from nearer the capitol and looking east. The reviewing stand, being deconstructed, is on the left. 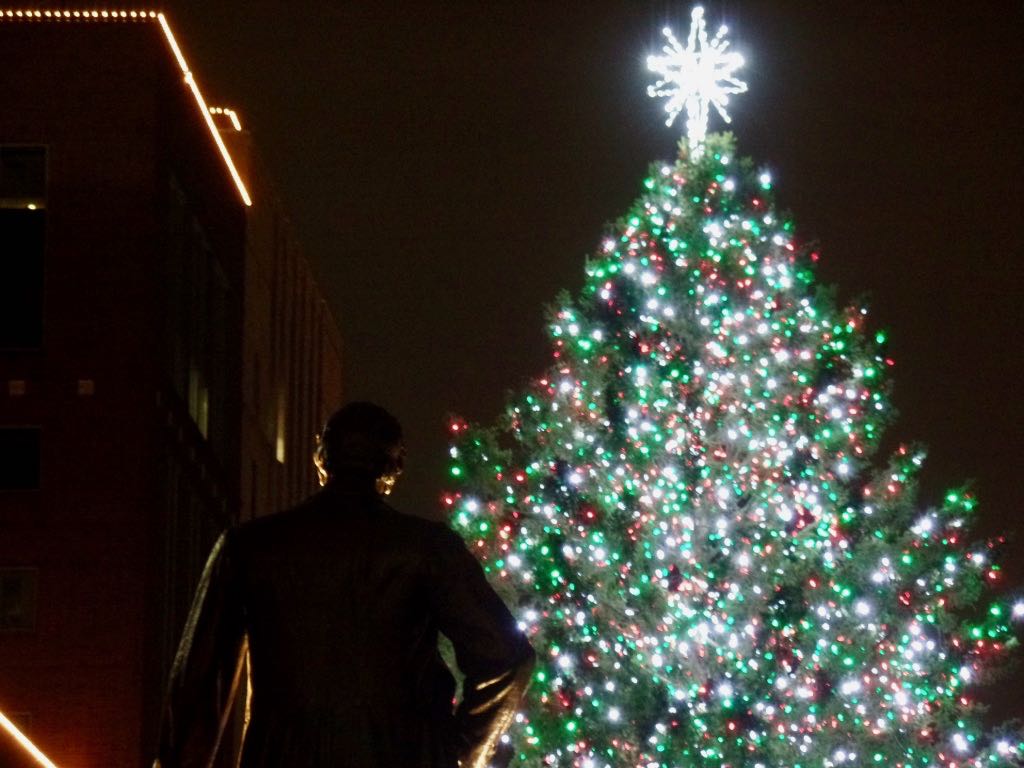 The statue of Austin Blair looks over the State Tree. 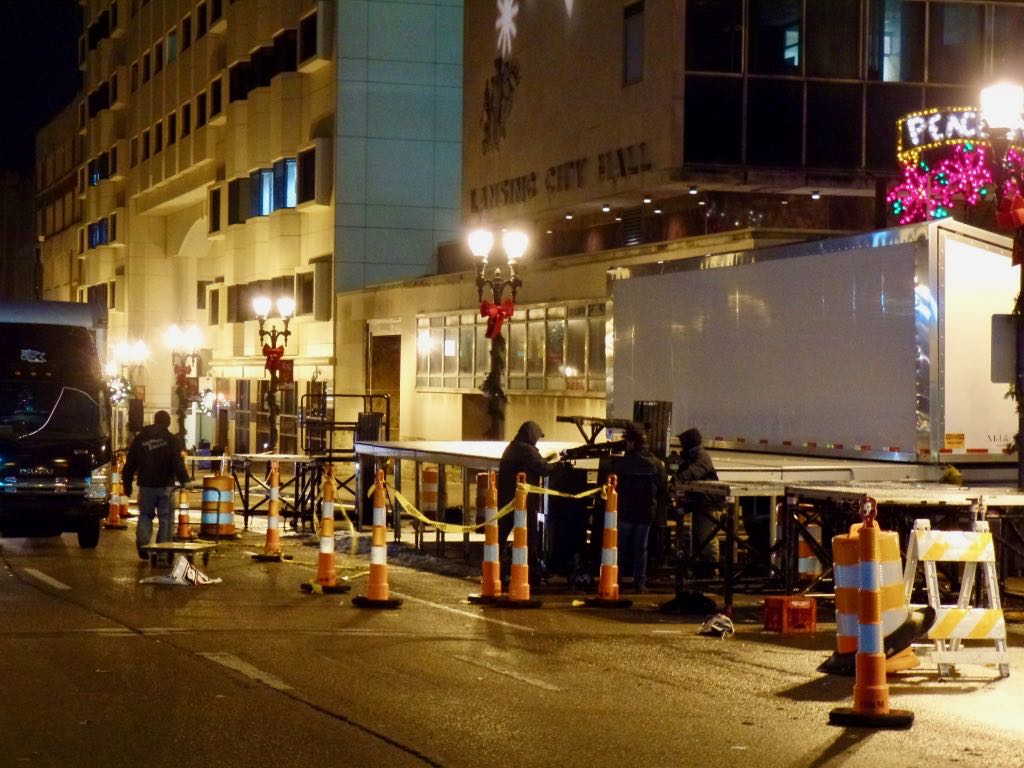 The reviewing stand getting taken apart.

Trivia: By January 1943 U-boat attacks on supply convoys had reduced the Royal Navy to only a two-month supply of oil. Source: Why The Allies Won, Richard Overy.

Currently Reading: The Girl on the Boat, P G Wodehouse.