And the music plays on, as the bride passes by

My mathematics blog made its big transition this week! How'd that all look? Kind of normal, actually.

The VFW Ann Arbor Pinball Hall of Fame etc had one of its rare open house nights Black Friday, 2018. We went of course. 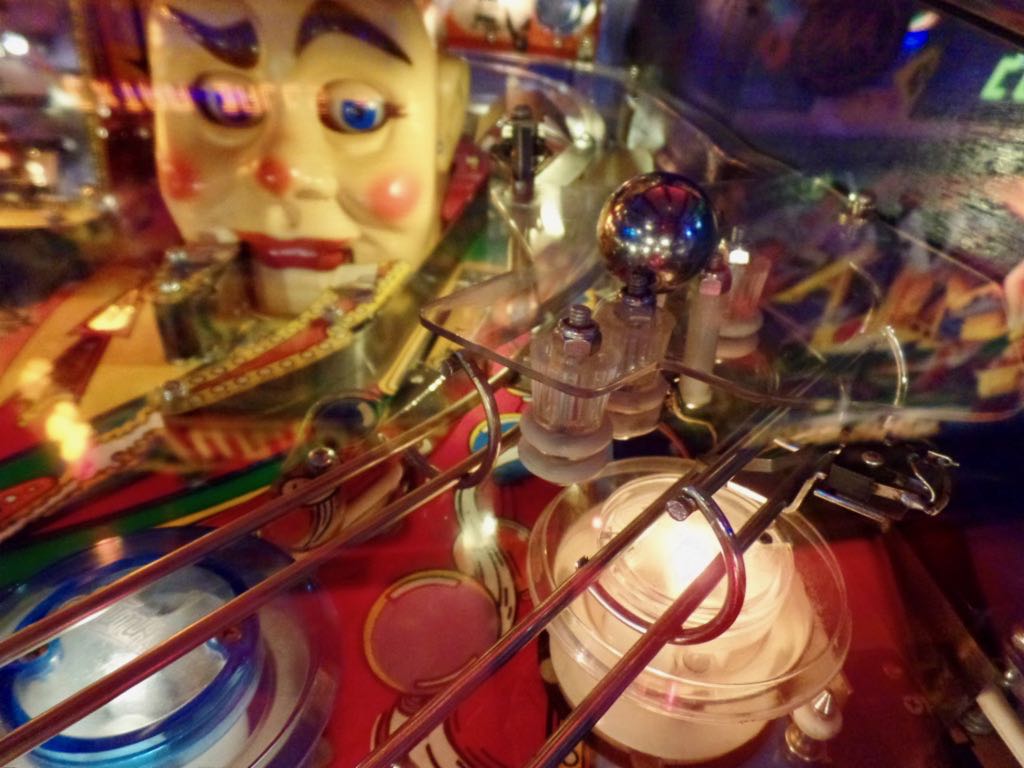 At the VFW for Black Friday 2018 we played a game of FunHouse, of course. And, not to brag, but I was on fire, so this happend. Of course. Happily we were able to get it out without breaking my magic; I think we might have even shaken it loose because they don't actually have tilts on the games at the VFW, which is one of the reasons they'll never hold the State Championship there, as great a venue as that would otherwise be. 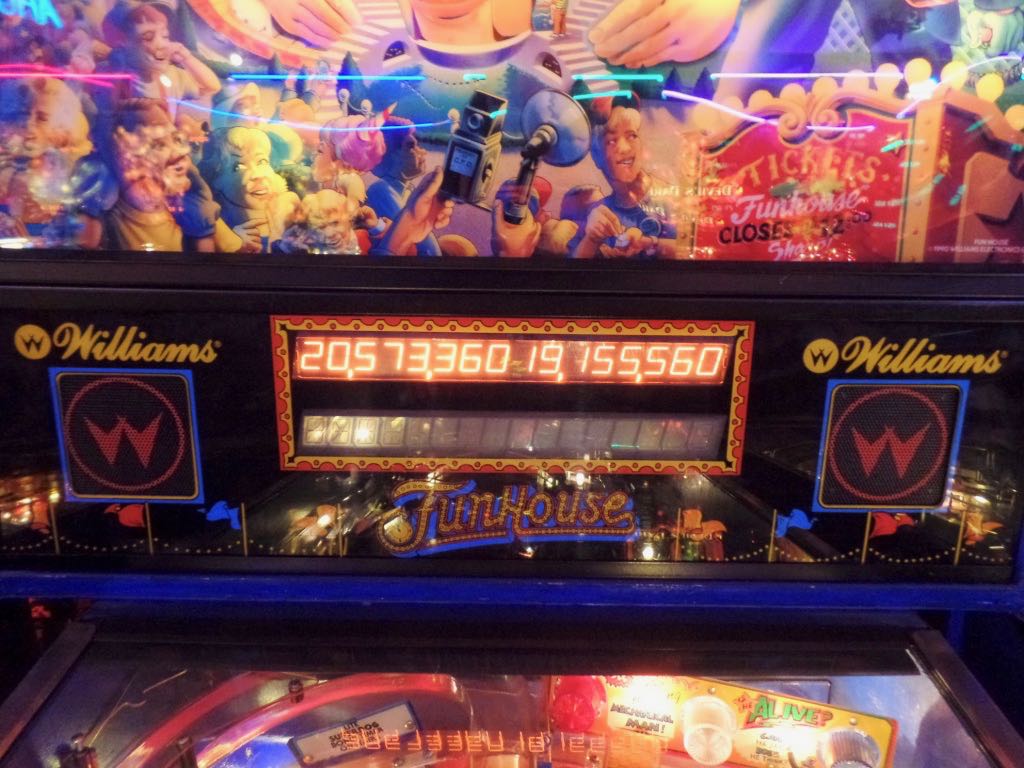 But ah, look at that! Both

bunny_hugger and I had fantastic games. FunHouse scores are, at most, eight digits long so the 16-digit LED screen has a bit of a problem when players one and two, or players three and four, have good games. Also, you know who it was squeaked out the other in this high-scoring game? 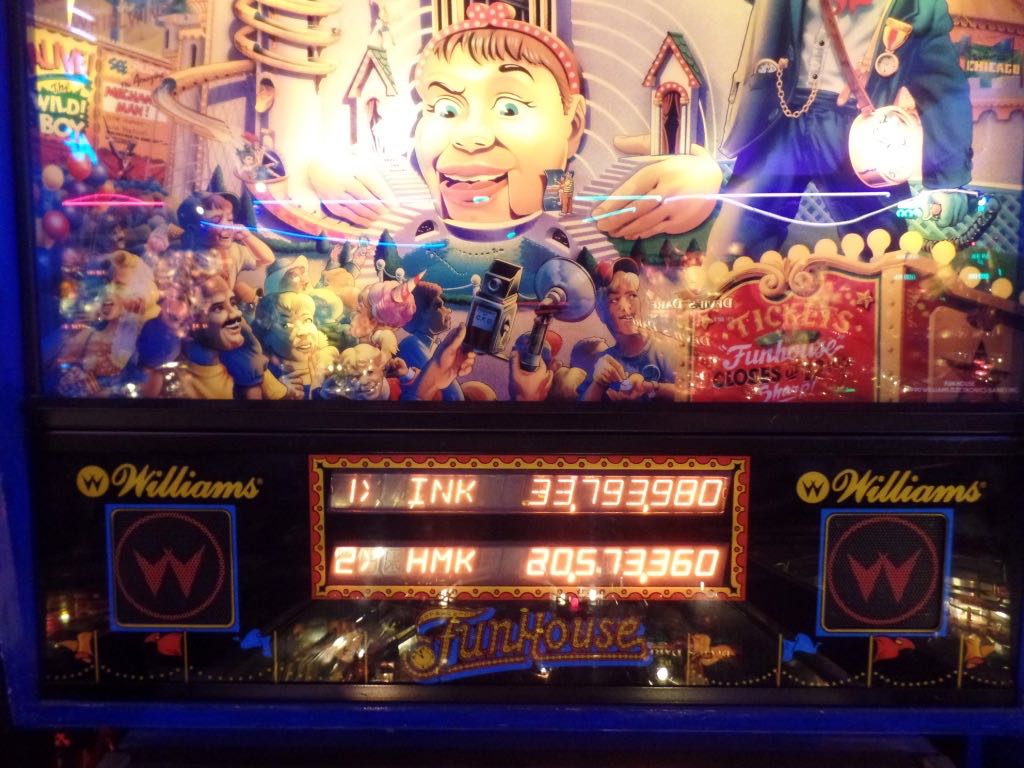 bunny_hugger beat me, and beat my high score from back in September that was still on the board somehow. 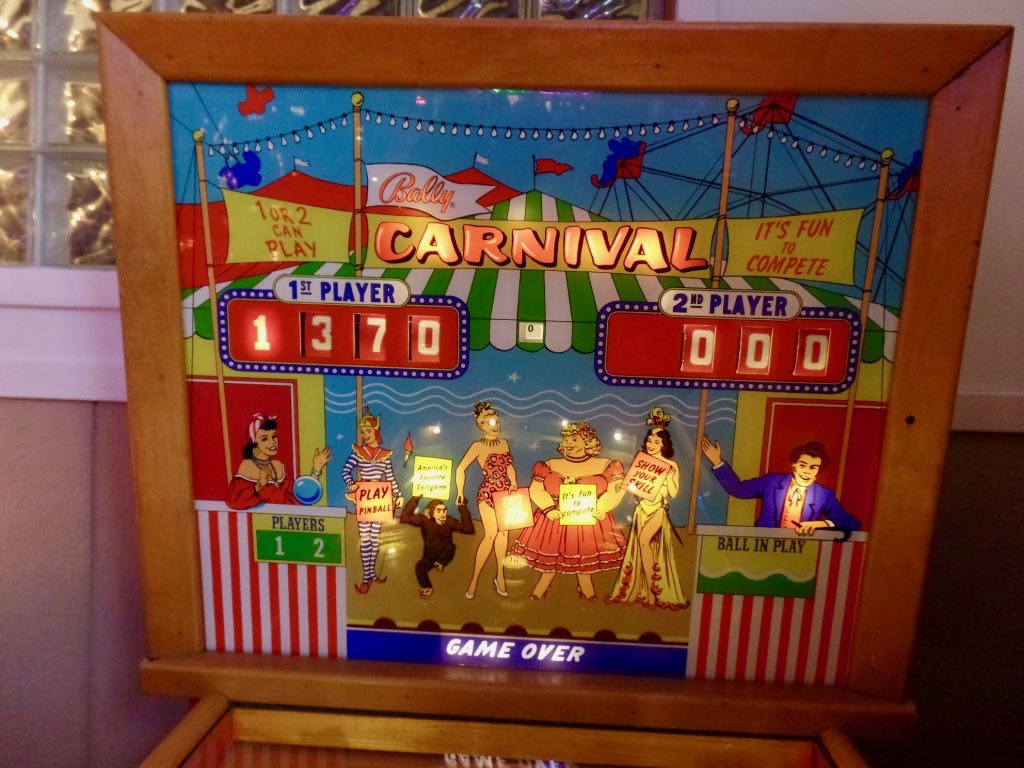 Looking around to games of interest, though? Here's 1957 Bally Carnival, one of the surprisingly few amusement park-themed games. Also Bally's last pinball machine for a good half-decade; they made exclusively bingo machines, batting games, and other novelties until Moon Shot in 1963. 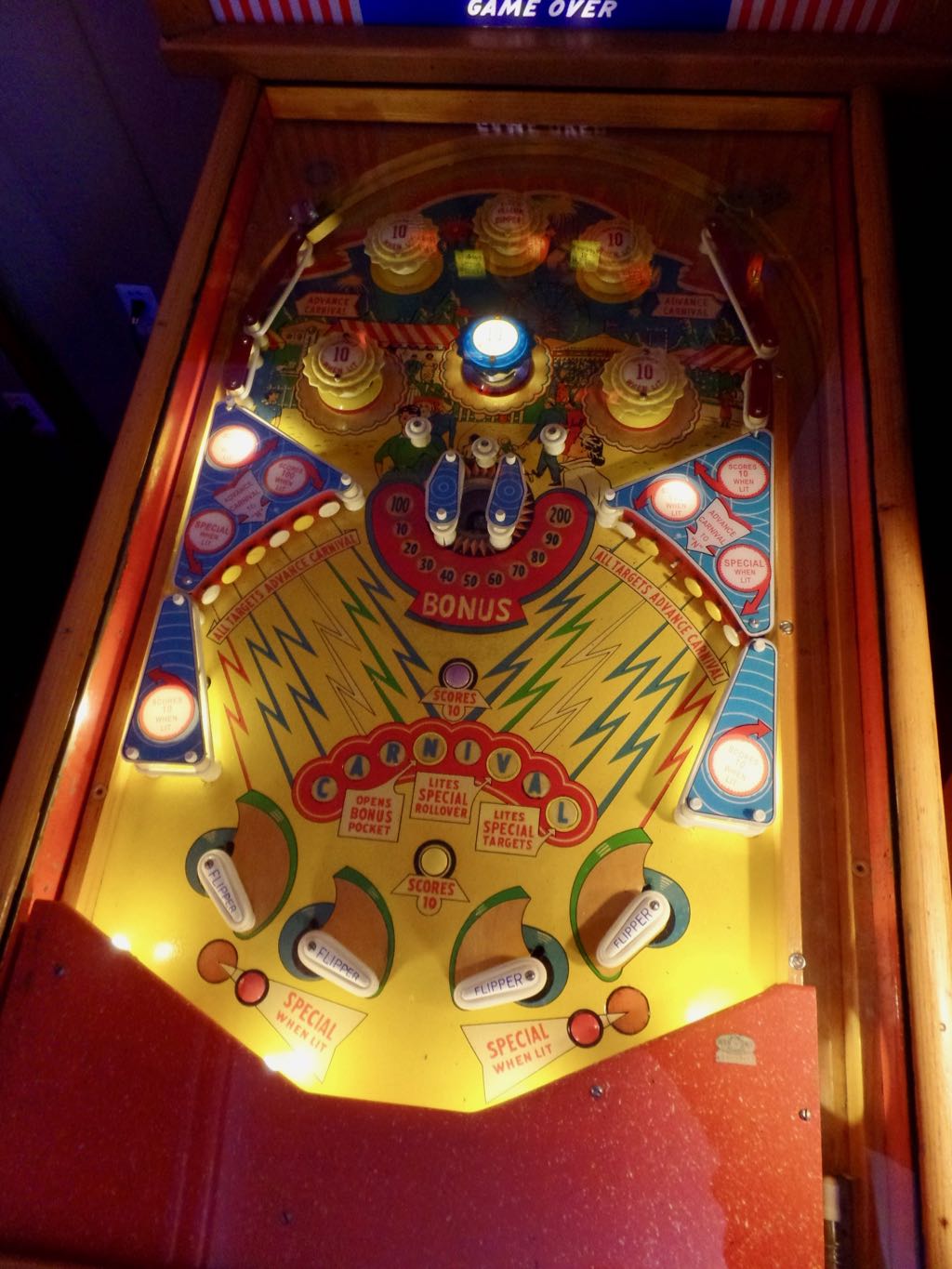 Thing about 50s pinball is that while they had flippers they didn't have the modern assumptions about how flippers should be placed or arranged, so you get absolutely wild combinations like this, which I'd like to see come back into play. 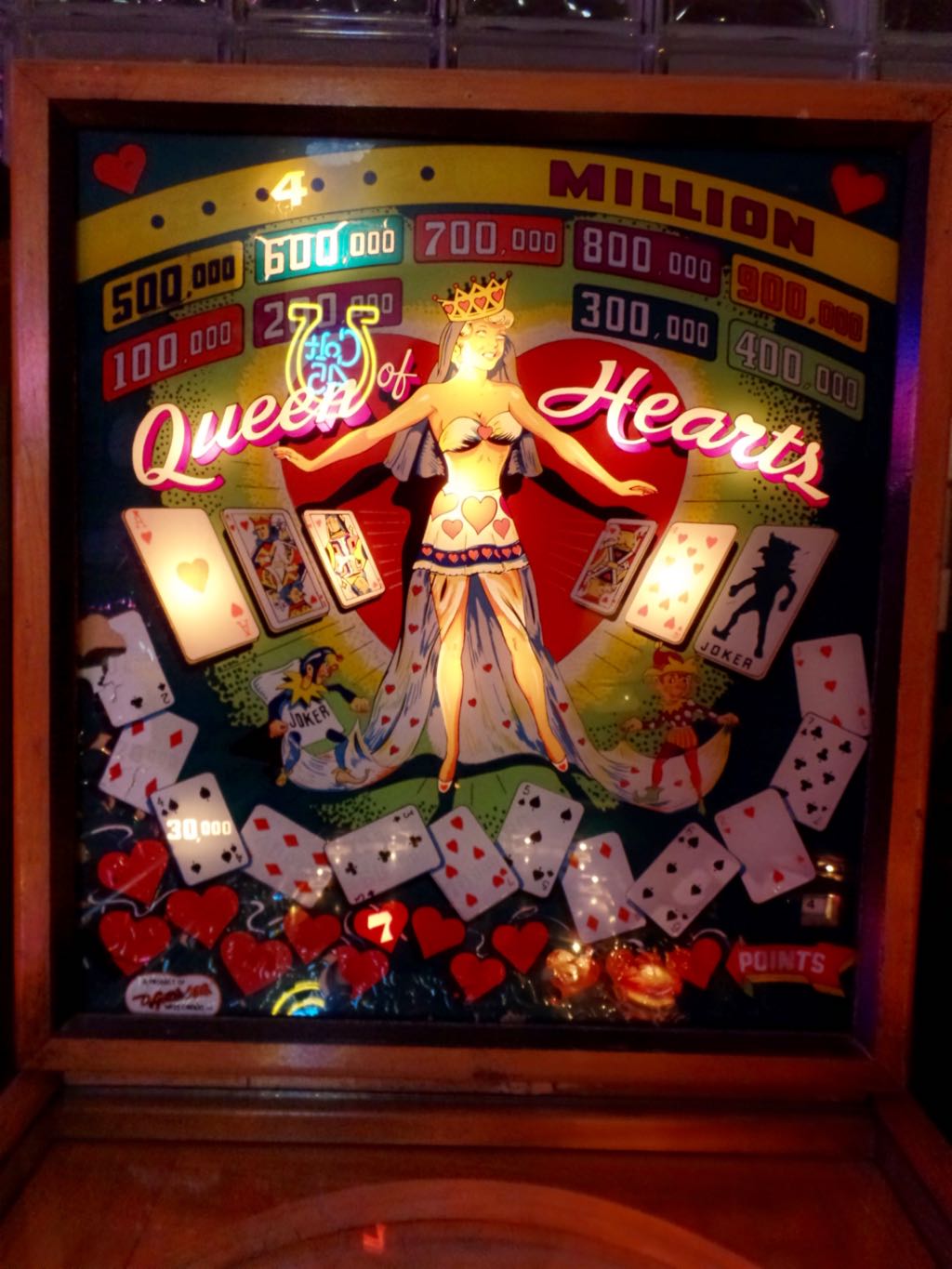 Gottlieb's Queen of Hearts, made 1952. Lights behind the number of millions, hundred thousands, and tens of thousands replace scoring reels. Also there's a separate 'points' system on the bottom that can give you an alternate way to earn extra balls or replays. Here, I'd scored 4,630,000 in the main game and collected 7 points. 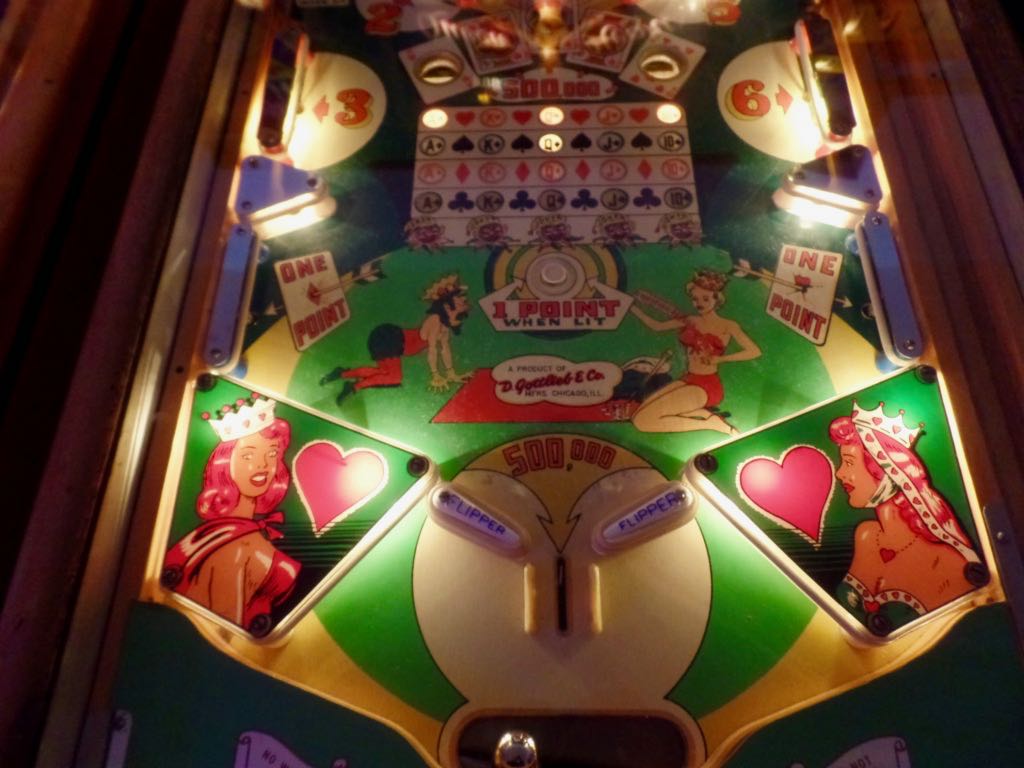 Lower playfield of Queen of Hearts, showing off again the experimental flipper layouts of the early 50s. And neat things you could do to earn points, as opposed to scoring. I'd like this sort of separate scoring track to make a comeback. Note that I've drained one ball (of five) at this point in the game. 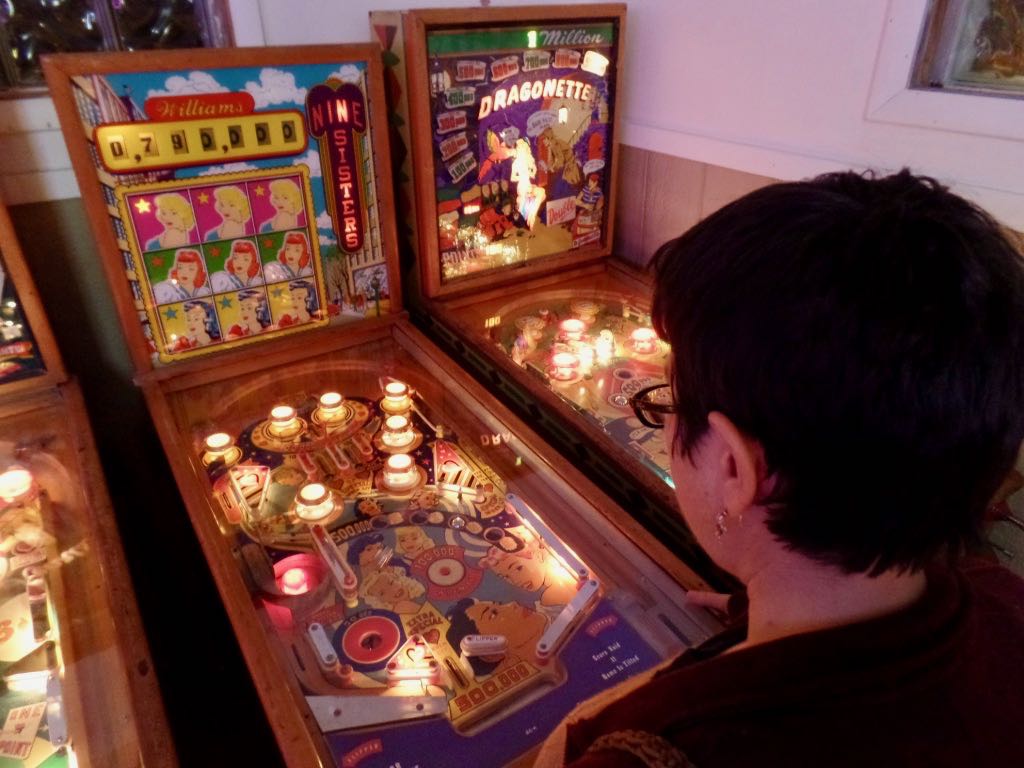 bunny_hugger plays the Williams 1953 woodrail game Nine Sisters, which among other things has a kickback mechanism, on the left outlane. It shoots the ball up a little spiral, which then shoots up back to the top of play again. There are almost no games of that era with such a three-dimensional element to play. Also, note that the game has gobble holes: you drop a ball in for (hopefully) a big points payout, but that ends the ball and you have to plunge a new one. Also there's just the one flipper, but to the right of that flipper is a kicker that honestly is pretty good at tossing the ball somewhere good anyway. The scoring reels were a short-lived innovation for Williams at the time; after a half-dozen tables they went back to bulb scoring for a couple years. 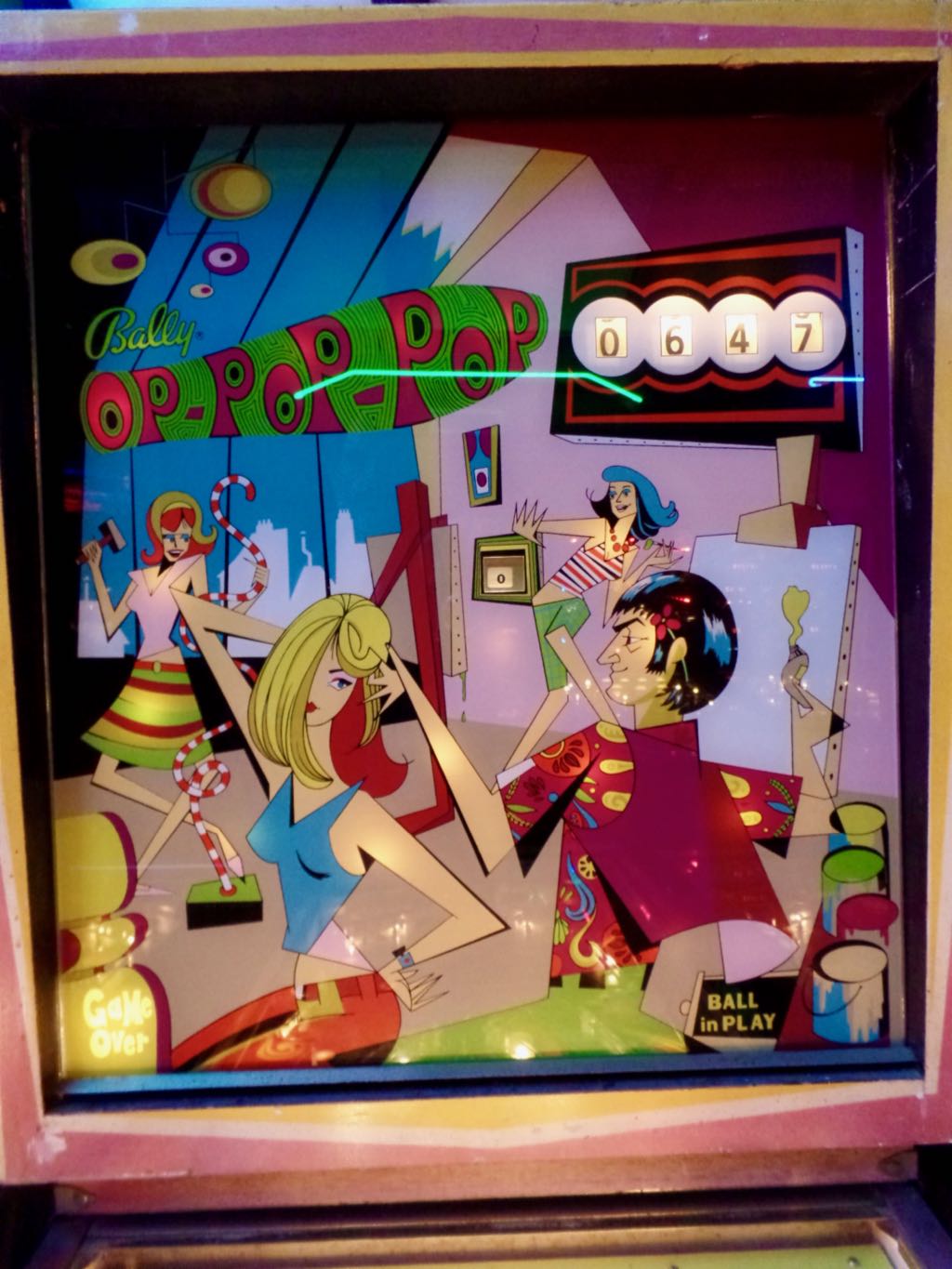 So you say this is Christian Marche artwork, huh? 1969 Bally game Op-Pop-Pop. 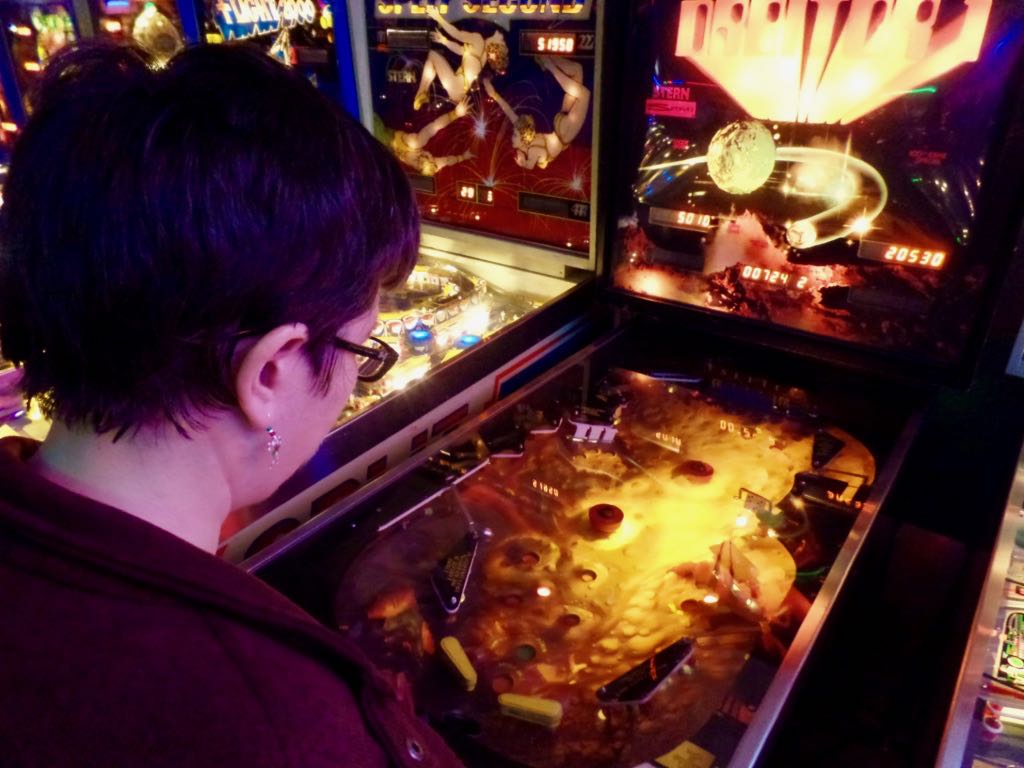 bunny_hugger having a game of Orbitor 1, the last production game made by Old Stern. This 1982 game has got an irregularly-shaped playfield, with color-changing lights (I don't know if that's original design or a mod that's been put on). It also has posts in the midst of the playfield that are actually spinning faster than the eye can see, so that when the ball touches them, it responds in weird and unpredictable ways. It's honestly a lot of fun, but I can also see why players would say this is ridiculous. 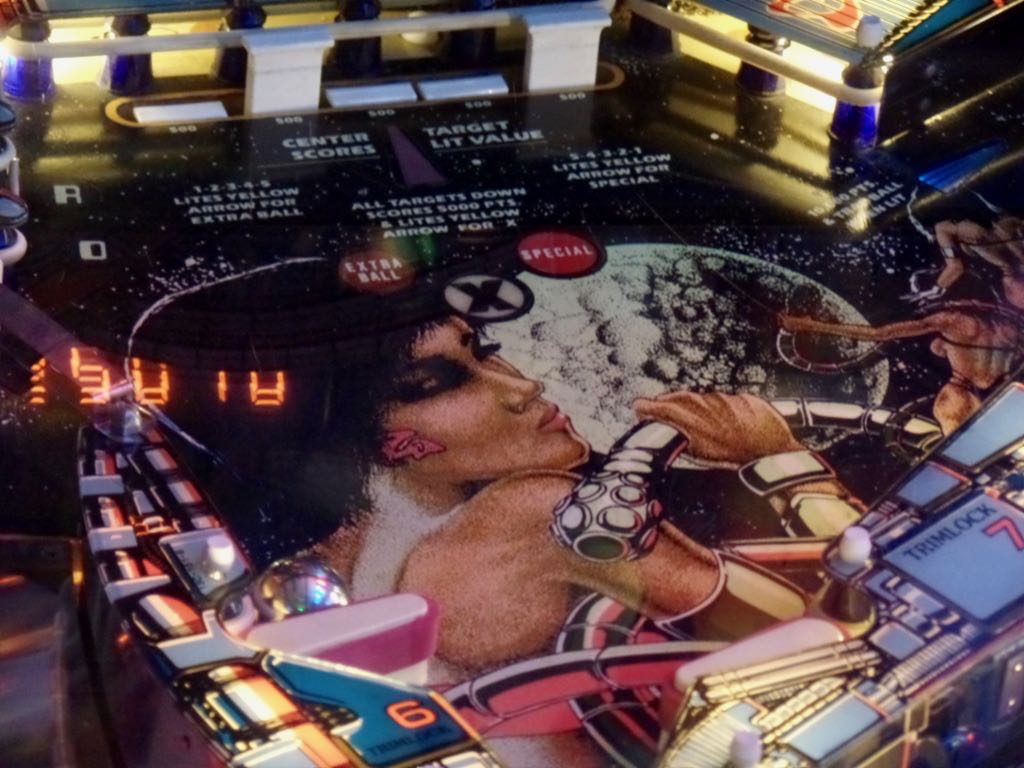 Detail of the upper playfield of the 1980s Stern game Iron Maiden, which features ... uh ... I'm sure that woman has a good reason for holding a long, complicated shower-head massage against her shoulder while in space? Right? 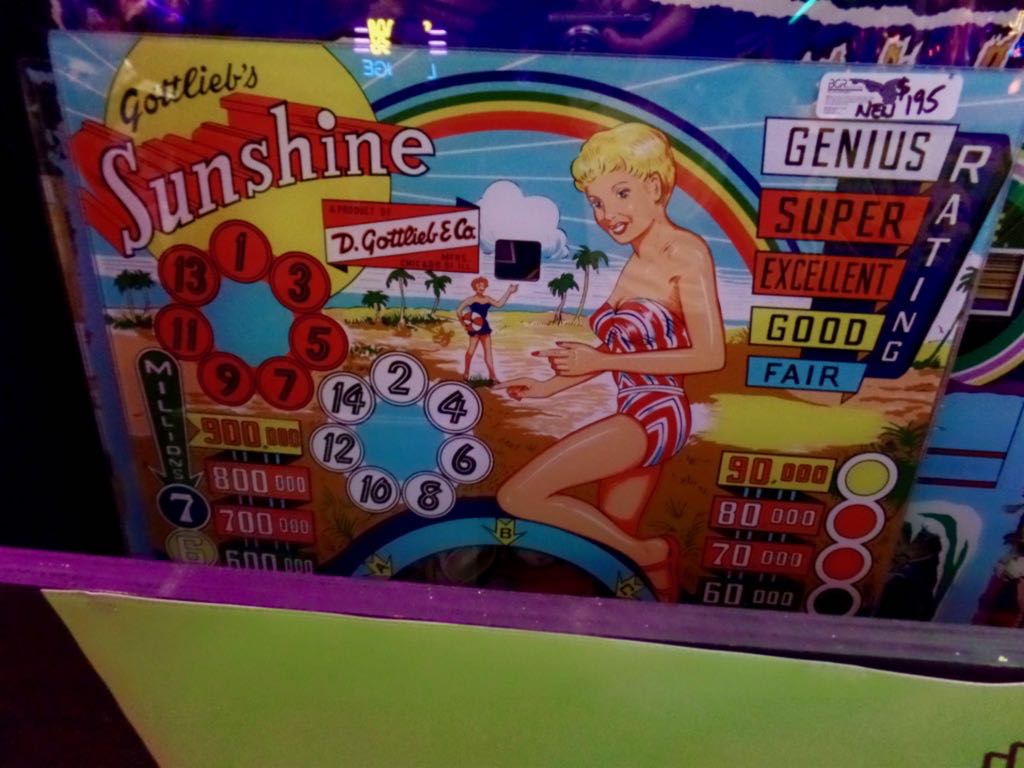 Backglass, on sale, for the 1958 Gottleib game Sunshine, which is just a bit too pricey to get because we happen to have a pet rabbit of the same name. They didn't have the actual table, so I don't know how the Rating bit comes into play. 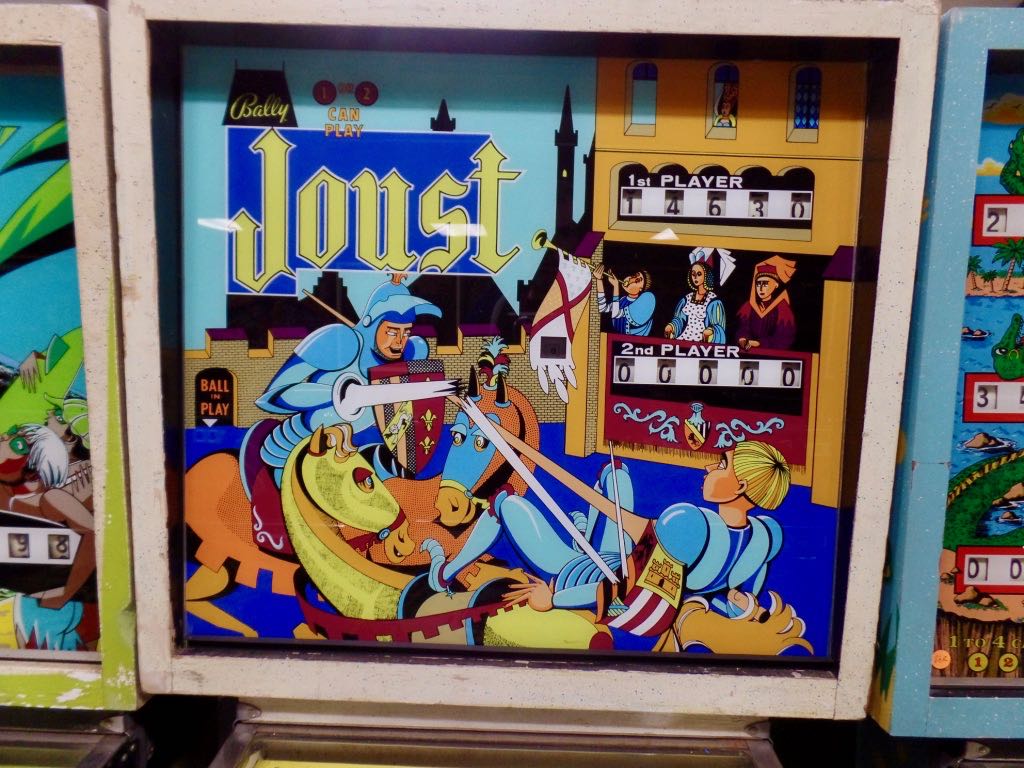 Trivia: The Agena engine burn which brought Gemini 11 to an orbit with 850-mile apogee --- the altitude record for human, non-lunar-mission, spaceflight --- was 26 seconds. Source: Gemini: Steps to the Moon, David J Shayler. (The starting orbit was about 180 miles.)

Currently Reading: Winnie the Pooh, A A Milne. Since, y'know, it came with iBooks I thought maybe I'd finally read it after all.