Help me if you can, I'm feeling down

Kokomo's Family Entertainment Center reopened earlier this month. As bad ideas go that's not a horrifying one. Their outdoor entertainments are miniature golf, bumper boats, go-karts, a batting cage ... stuff you can do with reasonable distance if you can get a flock of kids to behave. When we go it's always kind of sleepy so whereas I would not go to Michigan's Adventure in the current circumstance, Kokomo's would be plausible. Plus, they have a roller coaster. A small but legitimate one, that, during a sleepy business day, would probably be reasonably non-Covid-hazardous.

The other day it had some kind of accident. I'm not sure what happened; ordinary press reporting won't get into the kind of detail I need. (This is not to call it inaccurate; just that, say, if the incident says a roller coaster car derailed the same word applies to 'it came two inches off the track and got stuck' as 'it fell off the track into the grass below'.) This article makes it sound like something went wrong with the rollback mechanism, the thing that keeps the cars, as they ascend the lift hill, from descending rather too fast instead. Hal Shilling, Kokomos' owner, was in the car and injured, but is recovering.

The ride's shut, of course, for at least as long as it takes to investigate the accident and make needed repairs. I'm hoping they make needed repairs, rather than giving up on the roller coaster. It's a point of pride for the center, but I could see them deciding it can wait until after the Flash Depression, which might be forever. Unfortunately their online presence is basically defunct; their web site still lists their Google+ account, for crying out loud, and their Twitter and Facebook presences are about as bad.

We were not likely to go there for our anniversary, not this year. If we go out to do anything it'll likely be to a drive-in, which Michigan has a pleasant number of, although none near us. But if we absolutely had to ride a roller coaster (and there have been years we did not) this would have been the least unsafe one to visit. I suppose we could still go to the outdoor activities, but that's a pretty far drive go to for miniature golf and go-karts.

Today in pictures? Bit of a grab bag, a couple photos each from a night at Marvin's Marvellous Mechanical Museum, and then at the FrostyFest tournament AND held in his house. Then some Christmas tree setup, and finally the Lansing Beatles Launch Party. I know, I too am amazed I didn't somehow spread this over 200 pictures. 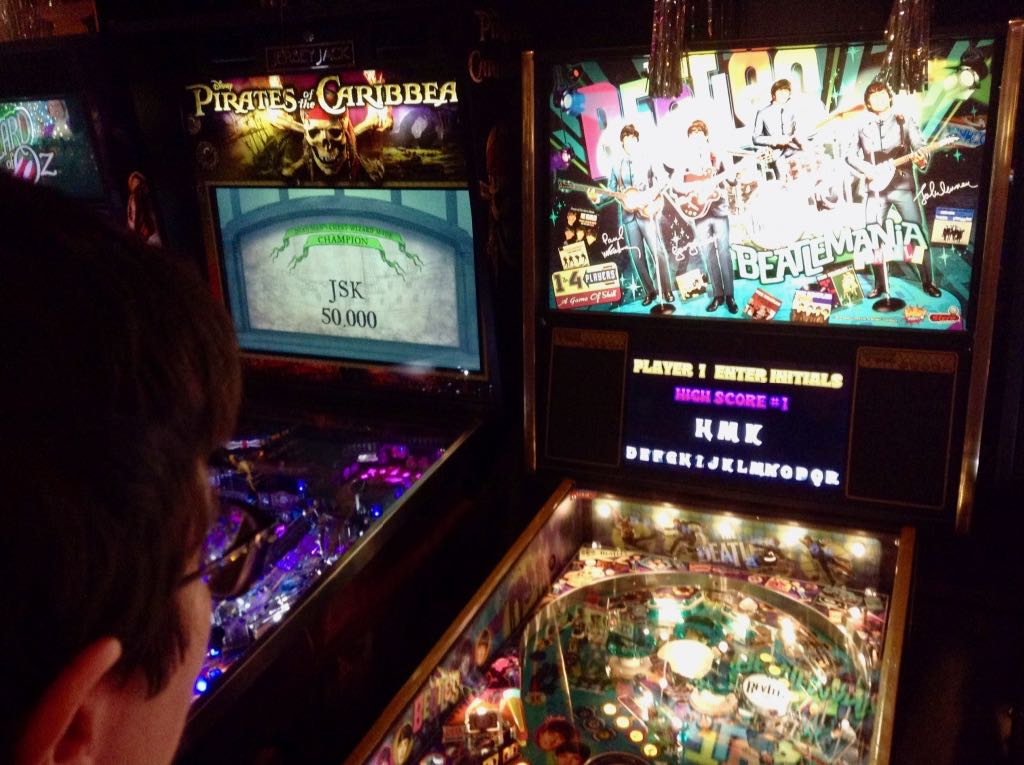 At Marvin's, the first night they had the Beatles game there.

bunny_hugger was a natural. This was before the launch party tournament started. 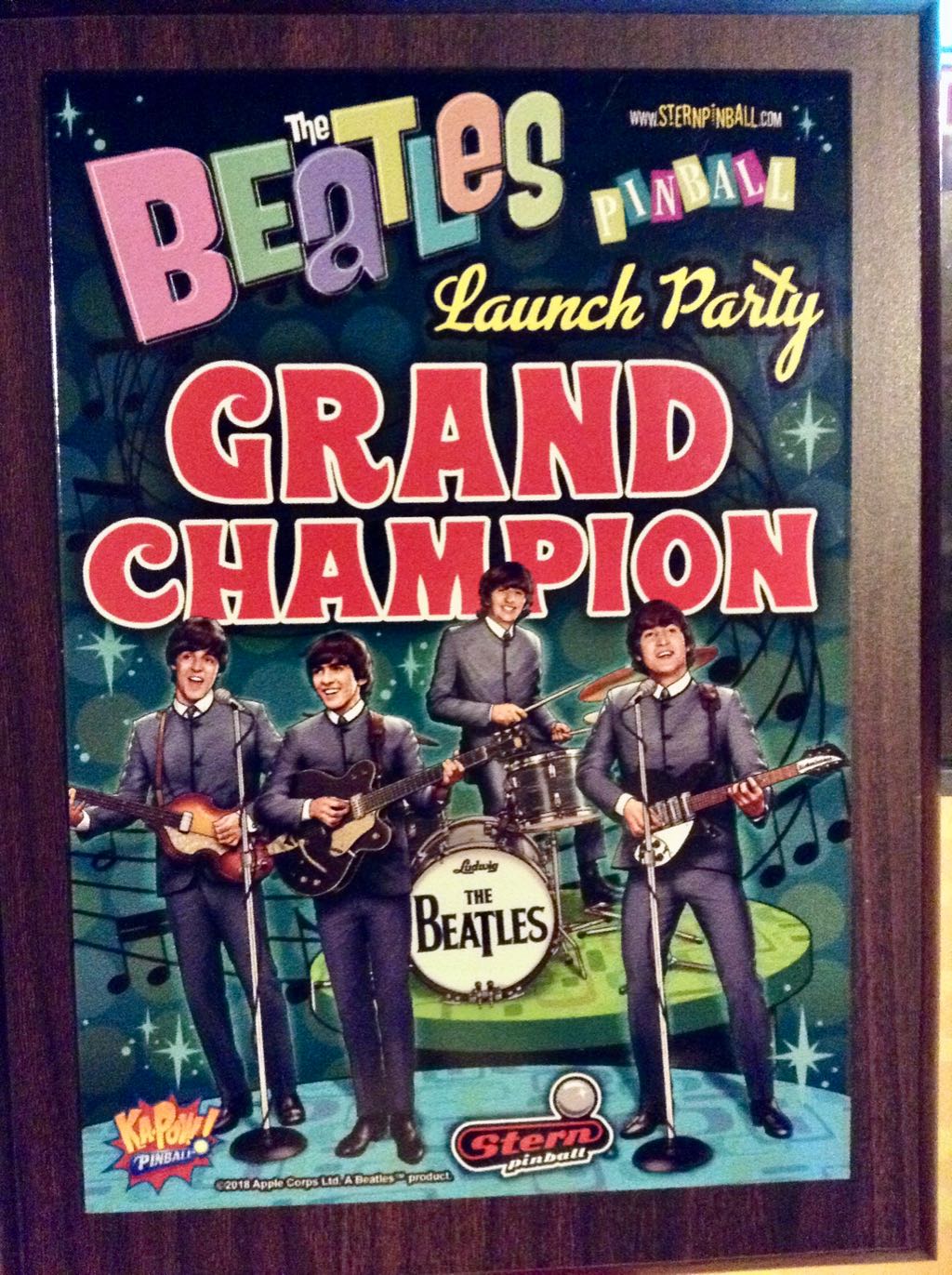 And here's the Grand Champion prize for the launch party which, to my eternal delight and surprise, I took home! 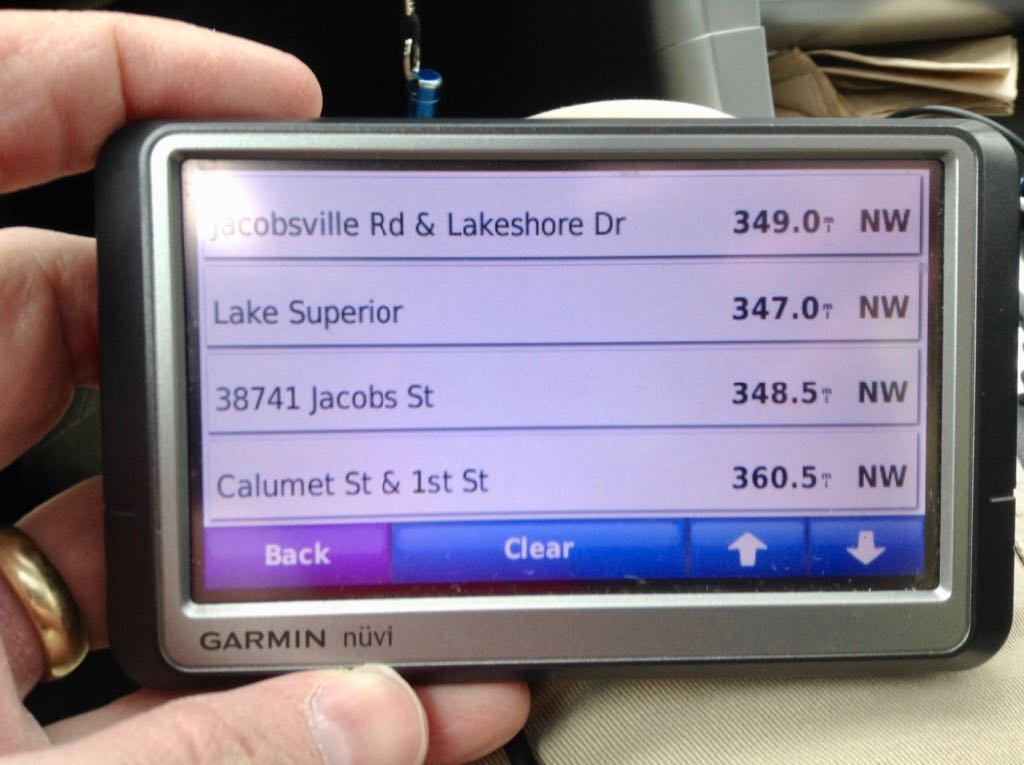 Going to the (separate) FrostyFest tournament at AND's house was almost the first time I'd used my satellite navigator since our trip to the upper peninsula and it still had this stuff in my recent-locations inventory. Note the machine's attempt to get us to drive into the water when we were looking for a lighthouse. 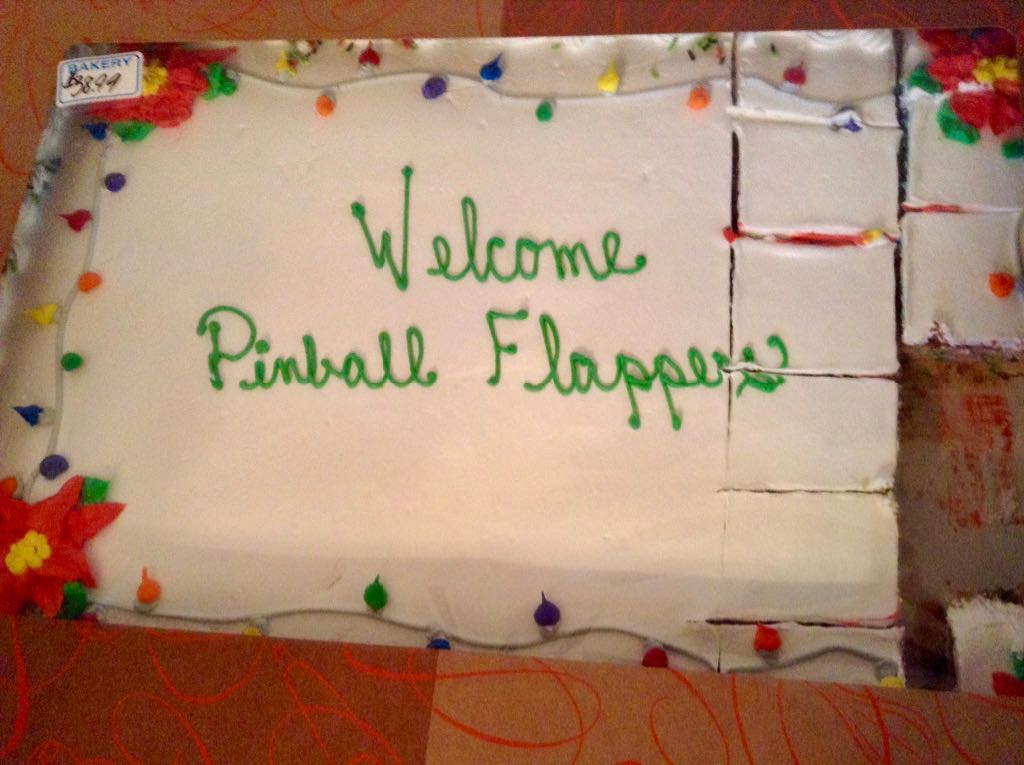 They had cake at FrostyFest! It's possible that the store didn't quite understand the message they were to write. 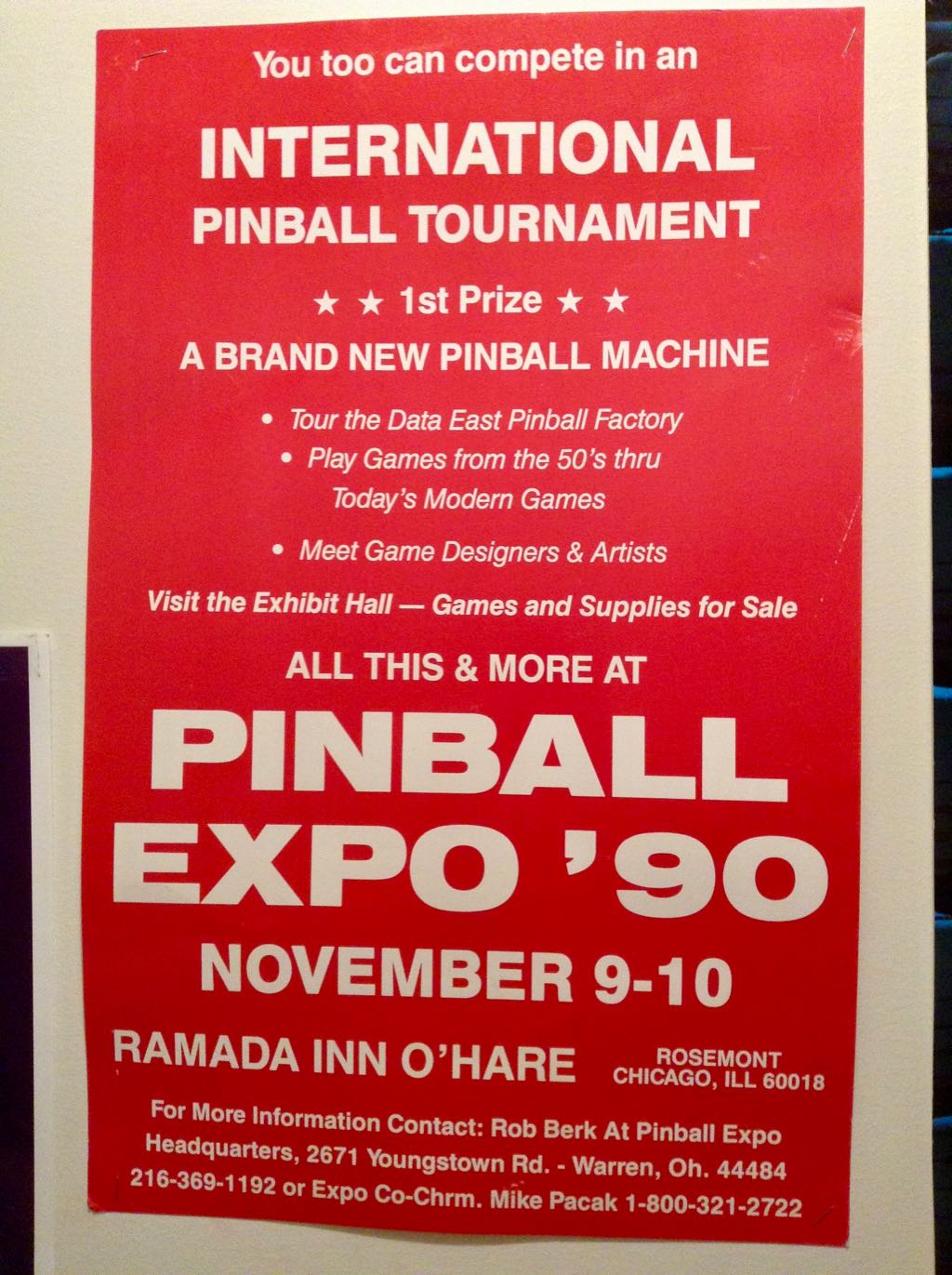 AND has been in pinball since before the Great Crash at the end of the century. 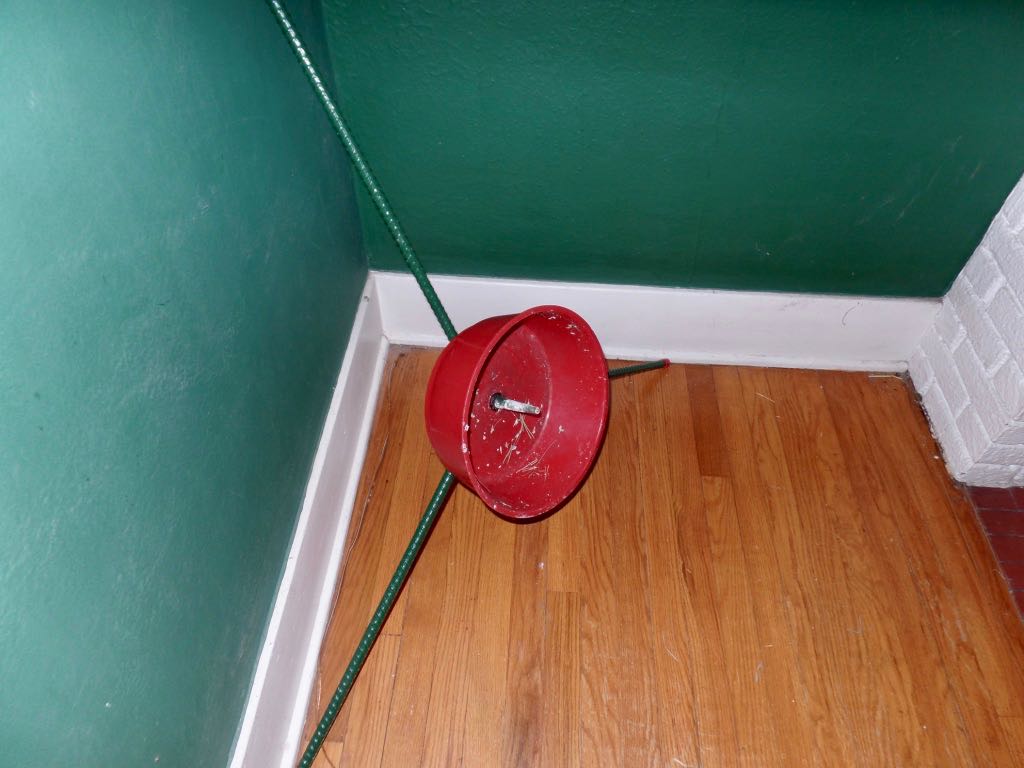 Back home, now! So here's the stand for our downstairs tree, being Pioneer 10. 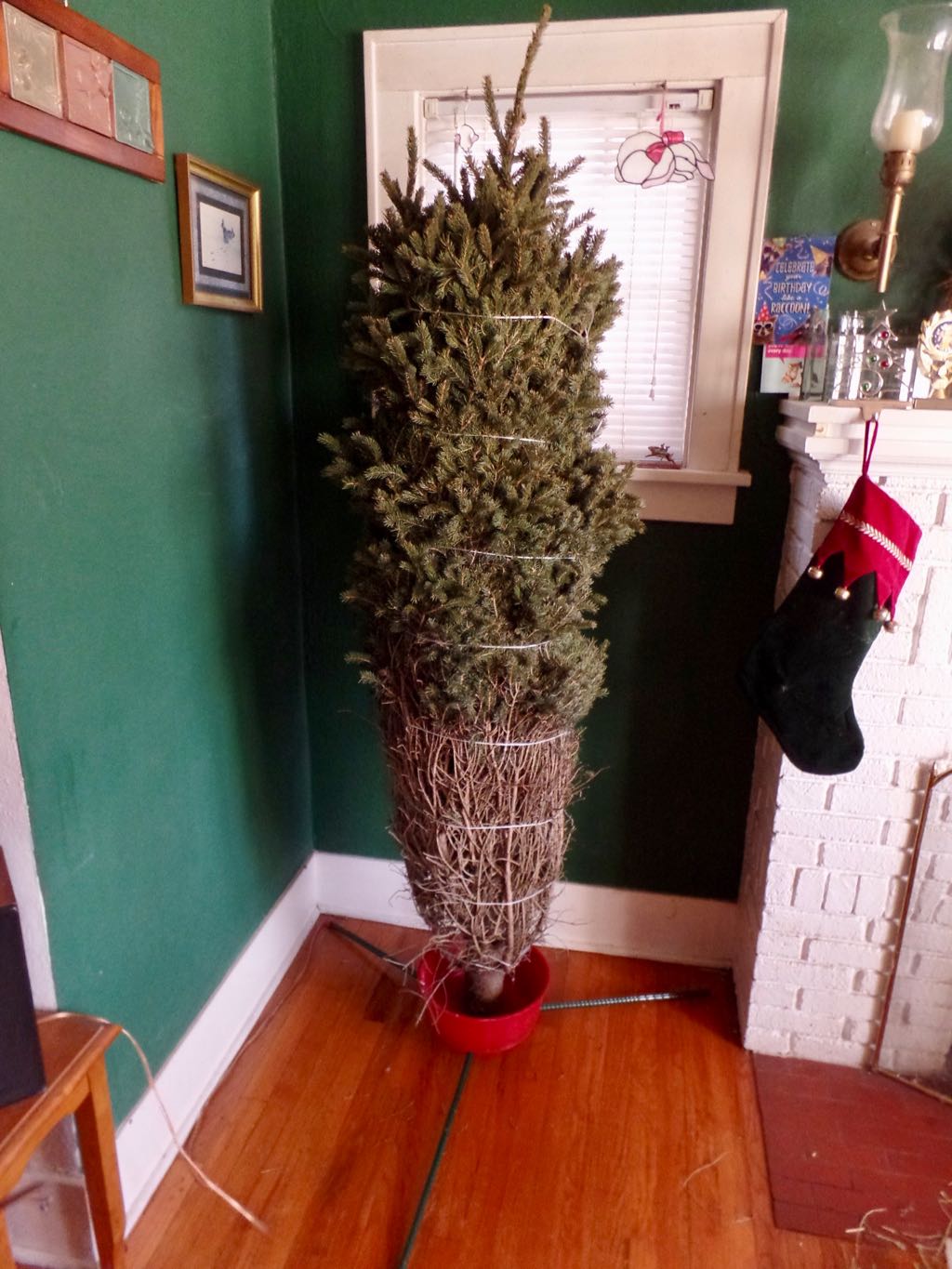 I failed to take pictures of cutting down our trees, somehow. Well, here's our downstairs tree, all bundled up and ready for the release. 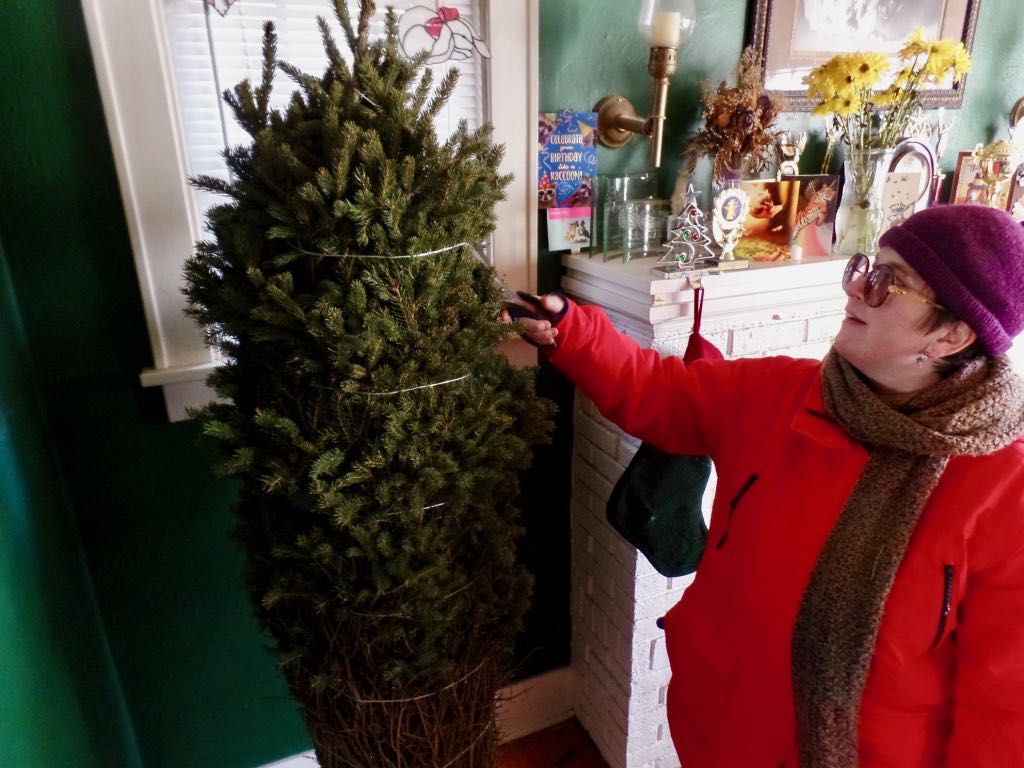 bunny_hugger didn't even take her jacket off for it. I think we also failed to think to fill the bucket with water before opening the tree up, when it would be easier. 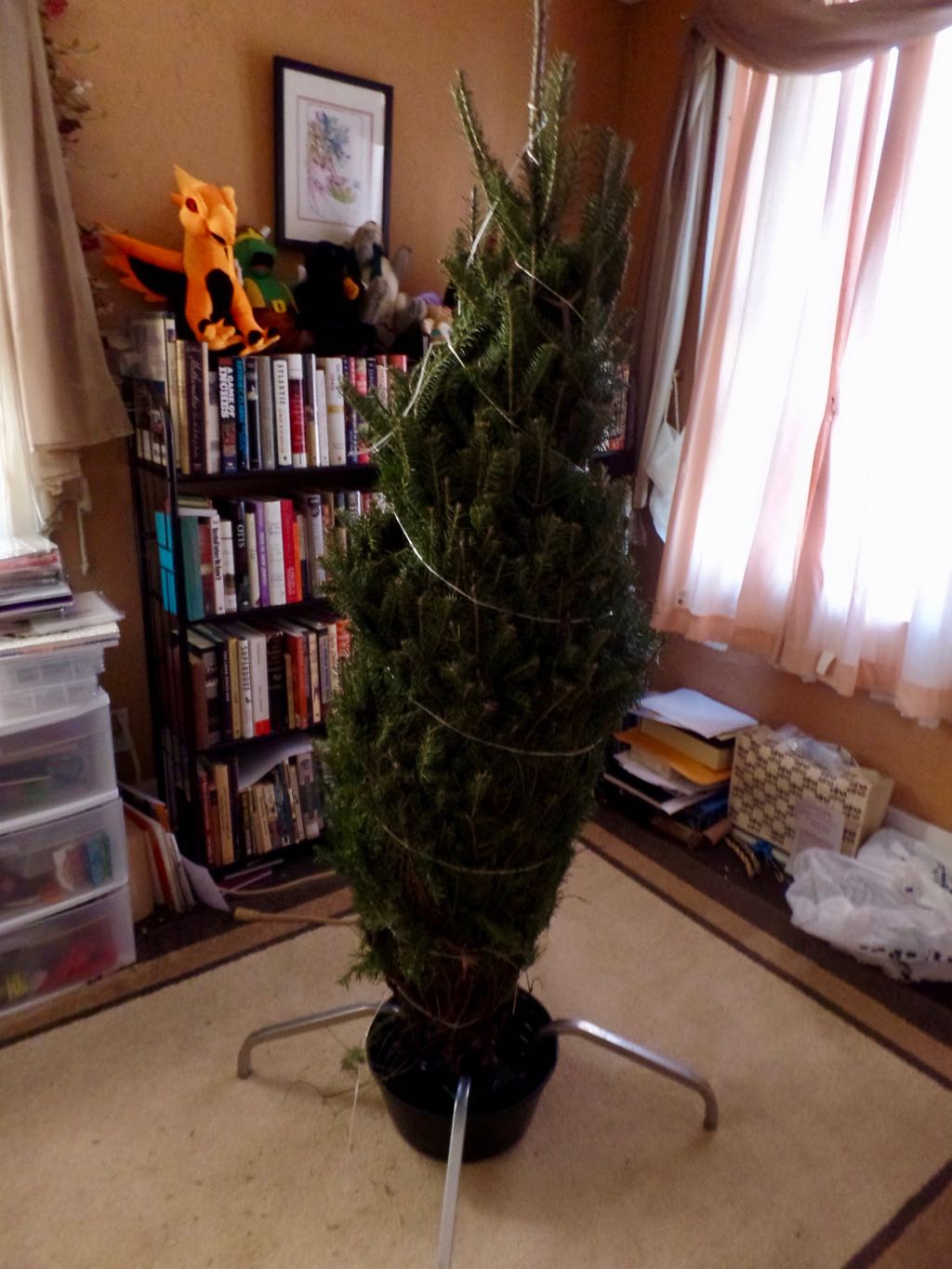 And here's our upstairs tree, bundled up and ready for release. 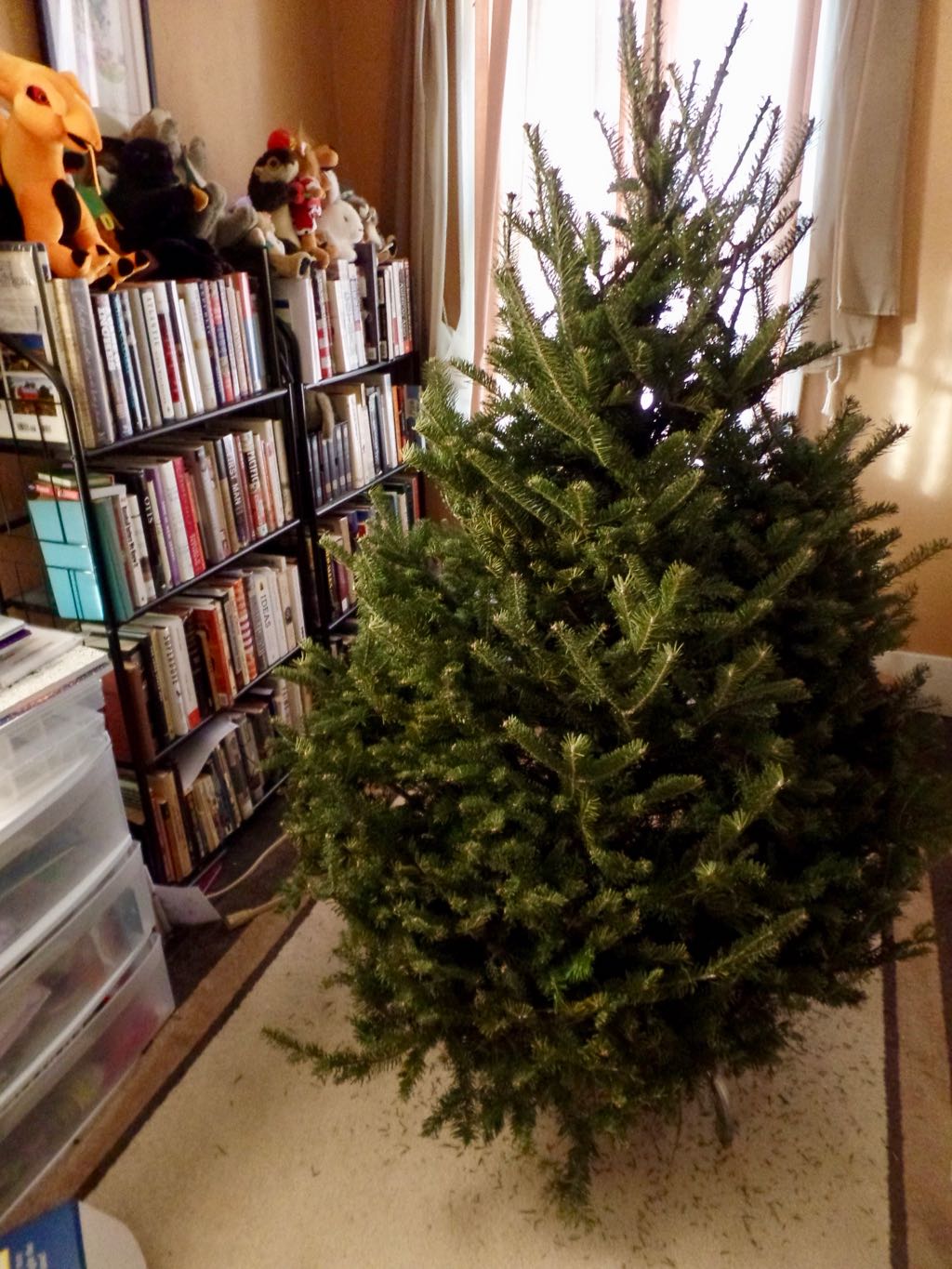 That's what it looked like. It was short, but had a great shape. 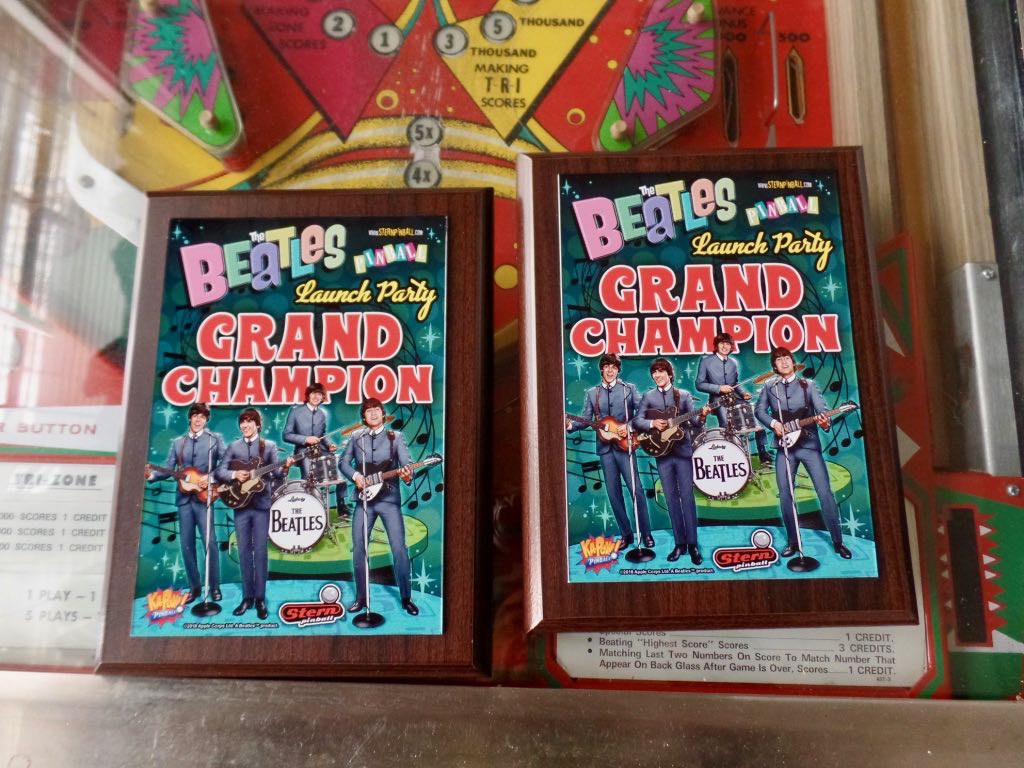 bunny_hugger to give to the launch party winner, whom we so hoped would be one of us. 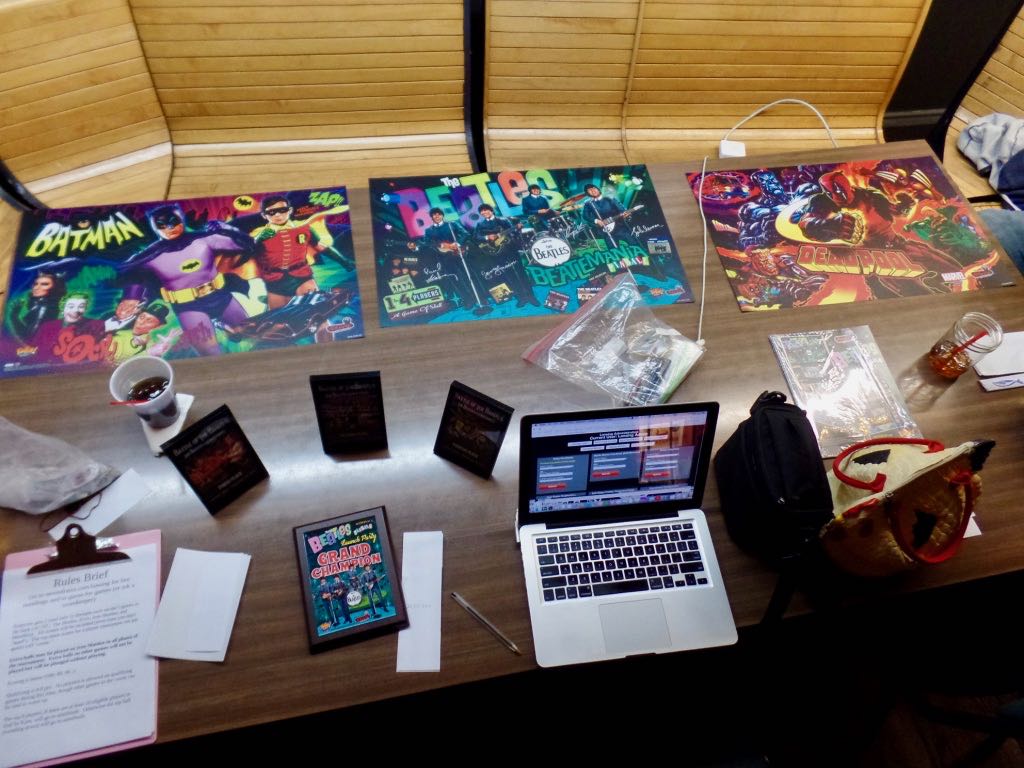 The Lansing Beatles Launch Party prize setup. Once again we commandeered the one good, big table at our hipster bar for it. 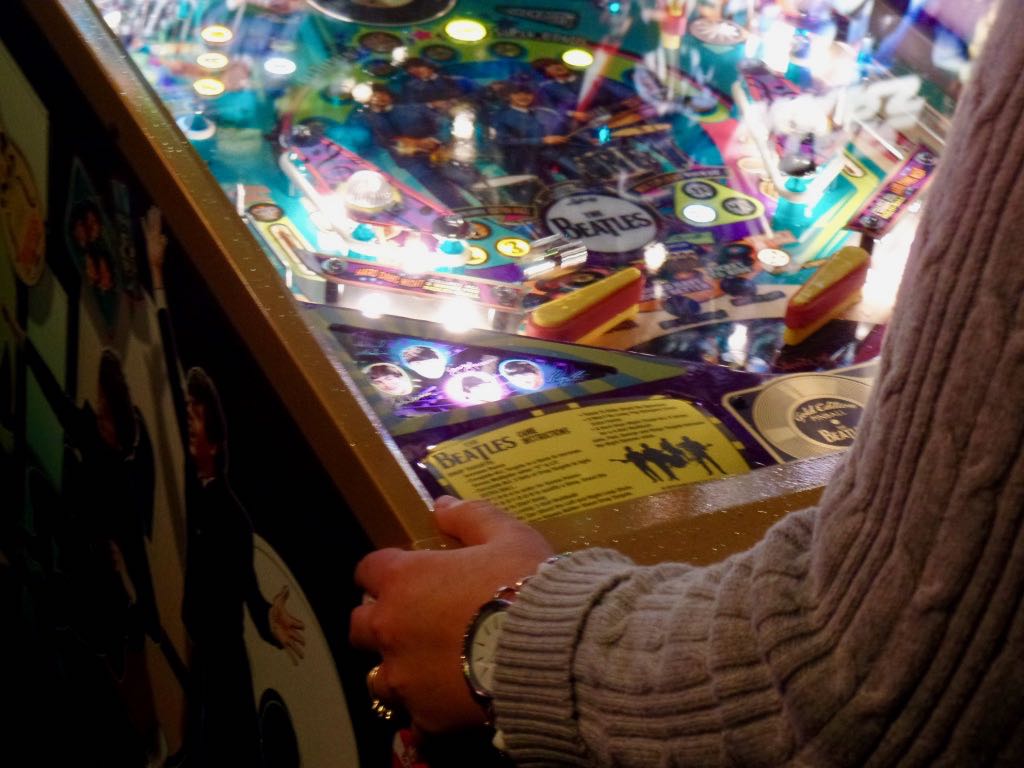 bunny_hugger being all expert at the game already. 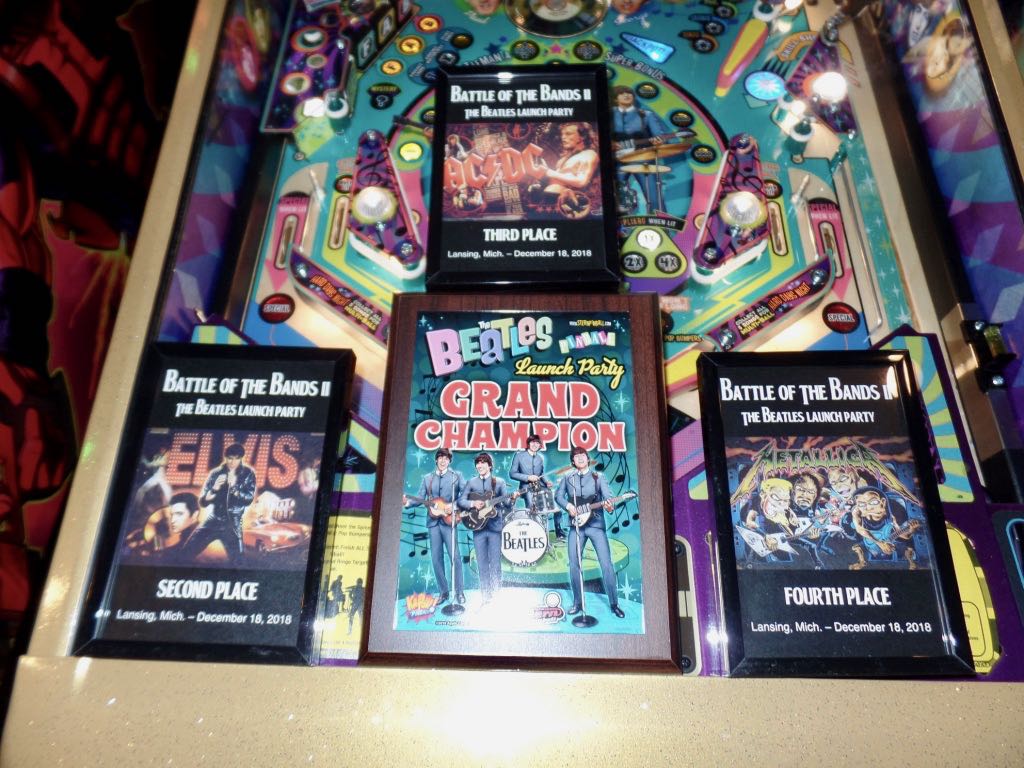 bunny_hugger the Grand Champion trophy. She made trophies for second through fourth place, based on some of the other games used in the launch party tournament.

Trivia: The English word ``fiasco'' was first borrowed from Italian, in which it means ``a glass bottle'', and (in English) first referred to a long-necked, straw-covered wine bottle. In the late 19th century it appeared in the current sense, meaning a failure; this seems derived from the French term ``faire fiasco'', literally ``to make a bottle'' but figuratively ``to fail'', and the Italian ``fare fiasco'', with the same literal and figurative meanings. How it got that sense is hard unclear. Source: Webster's Dictionary of Word Origins, Editor Frederick C Mish.