Run through the light

bunny_hugger's parents Saturday. Not to fix anything, either, although it turns out they're having some confusing issue with BritBox. No, this was just to hang out, ``chilling and grilling'' as they put it. We took, we trust, reasonable care: the whole thing outside apart from going to the bathroom or getting lemonade from the fridge. Even then, six feet or more distance between us and them.

We also brought sausage. BeyondMeat vegetarian sausage, to grill along with vegetable skewers and have with baked beans. Also, later on, strawberry shortcake. It was a great mass of food; I don't know how much weight I gained because for two days after I refused to weigh myself.

It was a bright, sunny day and their side yard doesn't really have enough shade trees. We had to move around several times to catch what shade there was, and at one point I got hot enough that I had to go inside and scrub my face with cold water. It happens this came while they were talking about some nasty health issues one of their dogs had, decades ago, and they worried they had grossed me out. Not so; I was just in danger of melting in the not-fun ways.

Meanwhile their dogs spent the whole time running around the large side yard, as though they weren't wearing fur coats during the hottest day of the month. And sometimes tearing off to bark at people walking by, or dogs walking by, or squirrels running around a tree not noticing them at all. Great day, really, even if we couldn't play Mice and Mystics or anything else.

And how about the story comics? What's Going On In Rex Morgan, M.D.? Is Rex Morgan really not doing a pandemic story? March - June 2020 gives you the plot recap.

How about pictures? Here's a bunch of ones from around Christmas 2018. And that means I am technically less than a year and a half behind! There's a ``good'' side to the pandemic after all! 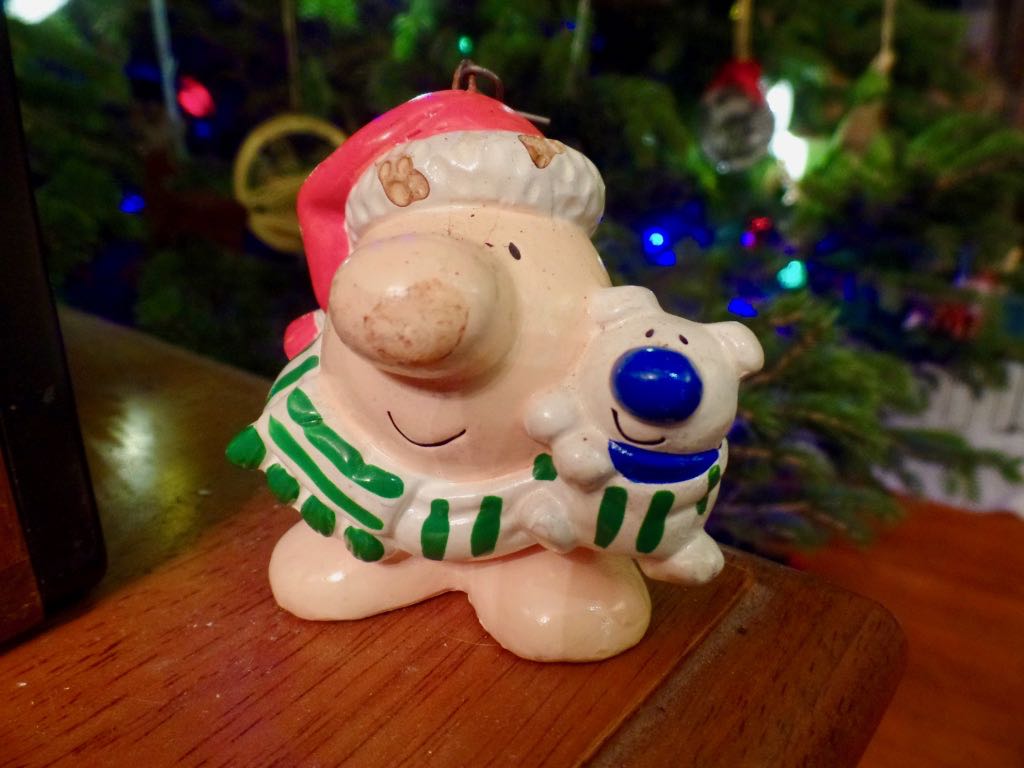 One of my own oldest ornaments, a Ziggy with his dog that we got for ... some 70s reason. Probably my love of comic strips and the indiscriminate nature of parents buying stuff for their kid's weird obsessions. 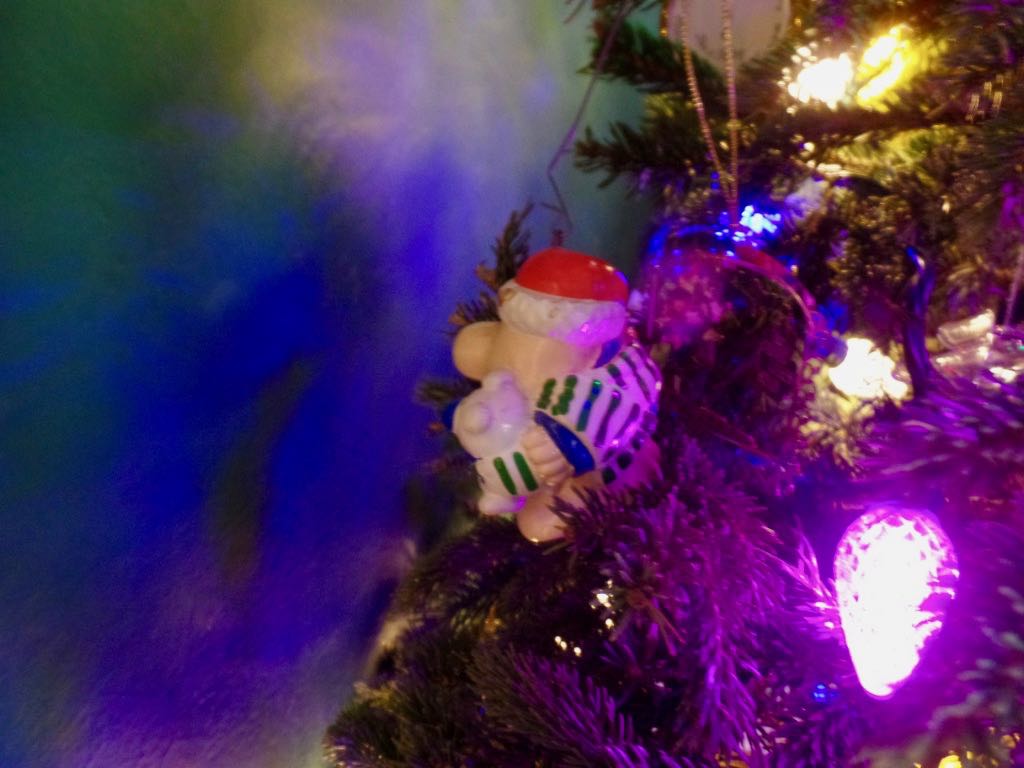 We did not deliberately place it so Ziggy would be staring close at the wall, but it's certainly on point. 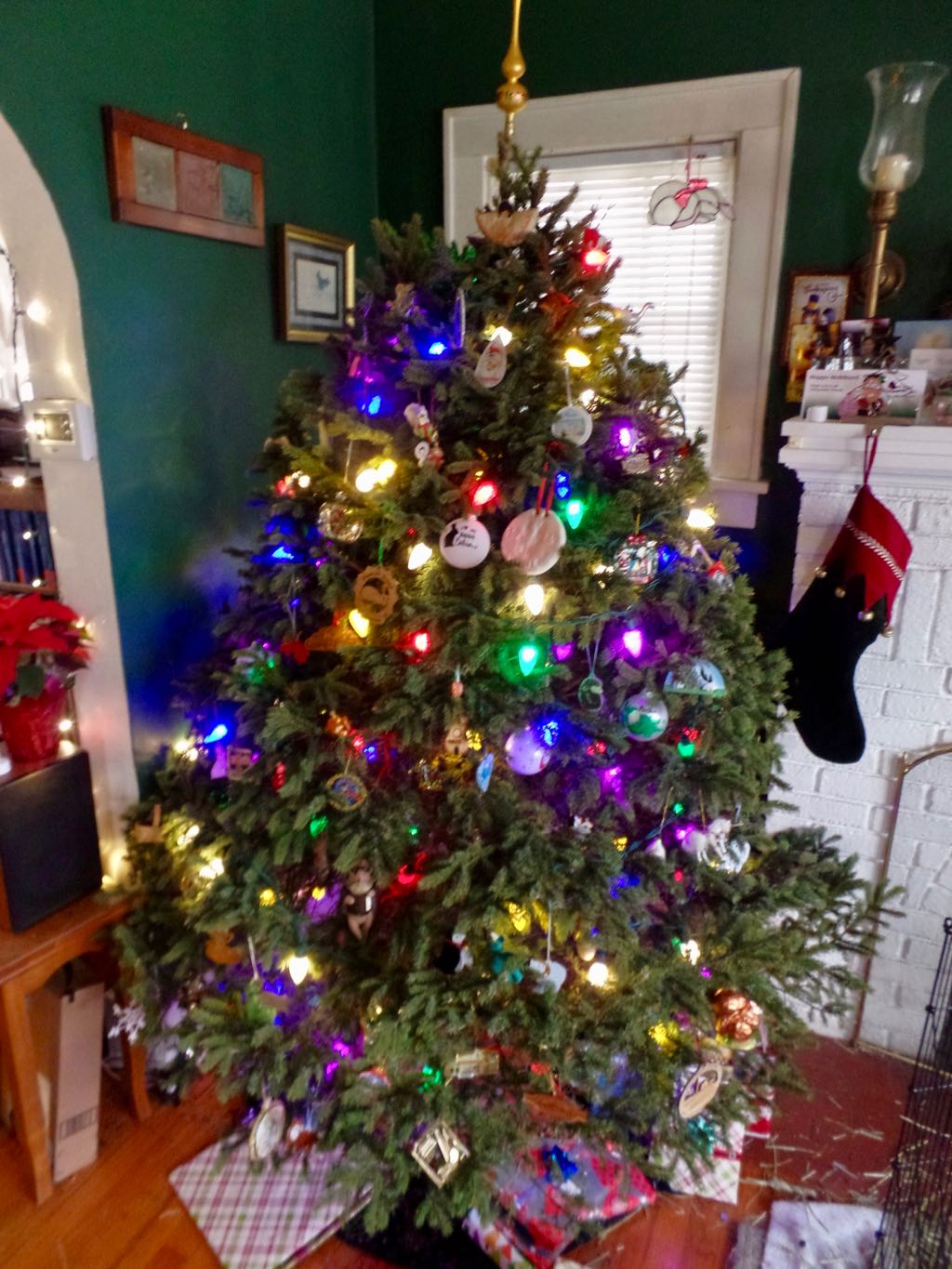 What the downstairs tree looked like, ahead of packing up all the presents to bring to 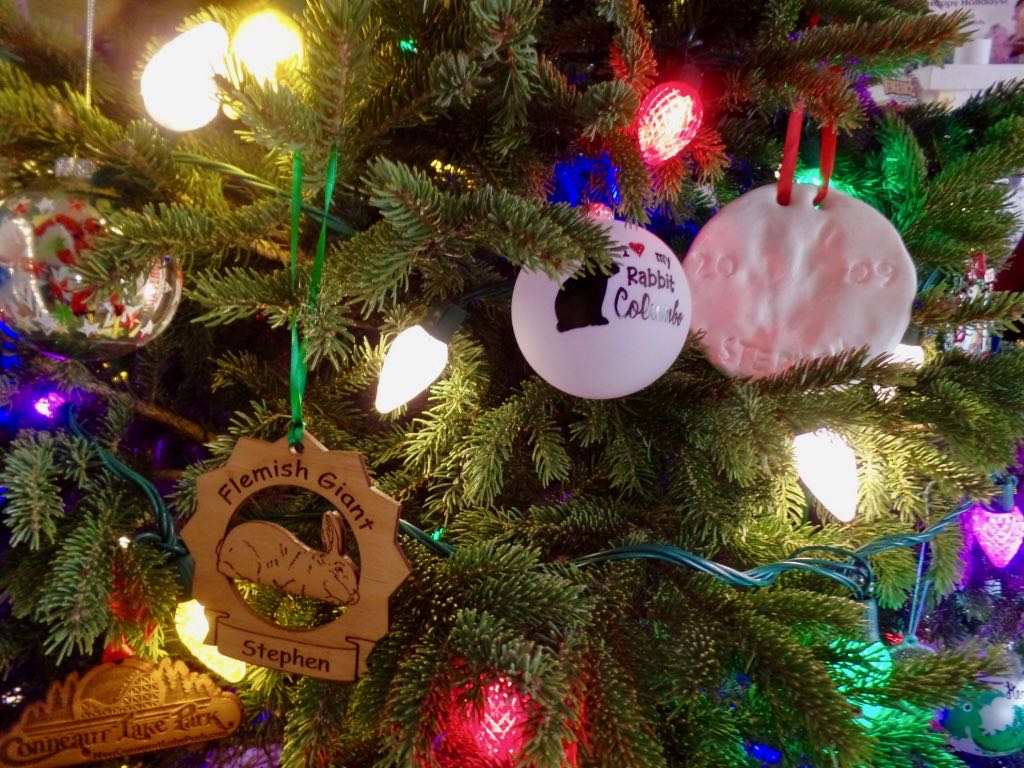 A focus on some of the ornaments dedicated to Stephen and Columbo. There's the footprint of Stephen made in 2009 during an experience he HATED. This drew zero sympathy from

bunny_hugger's mother who said he could put up with it for a couple minutes; we'd have this for years. 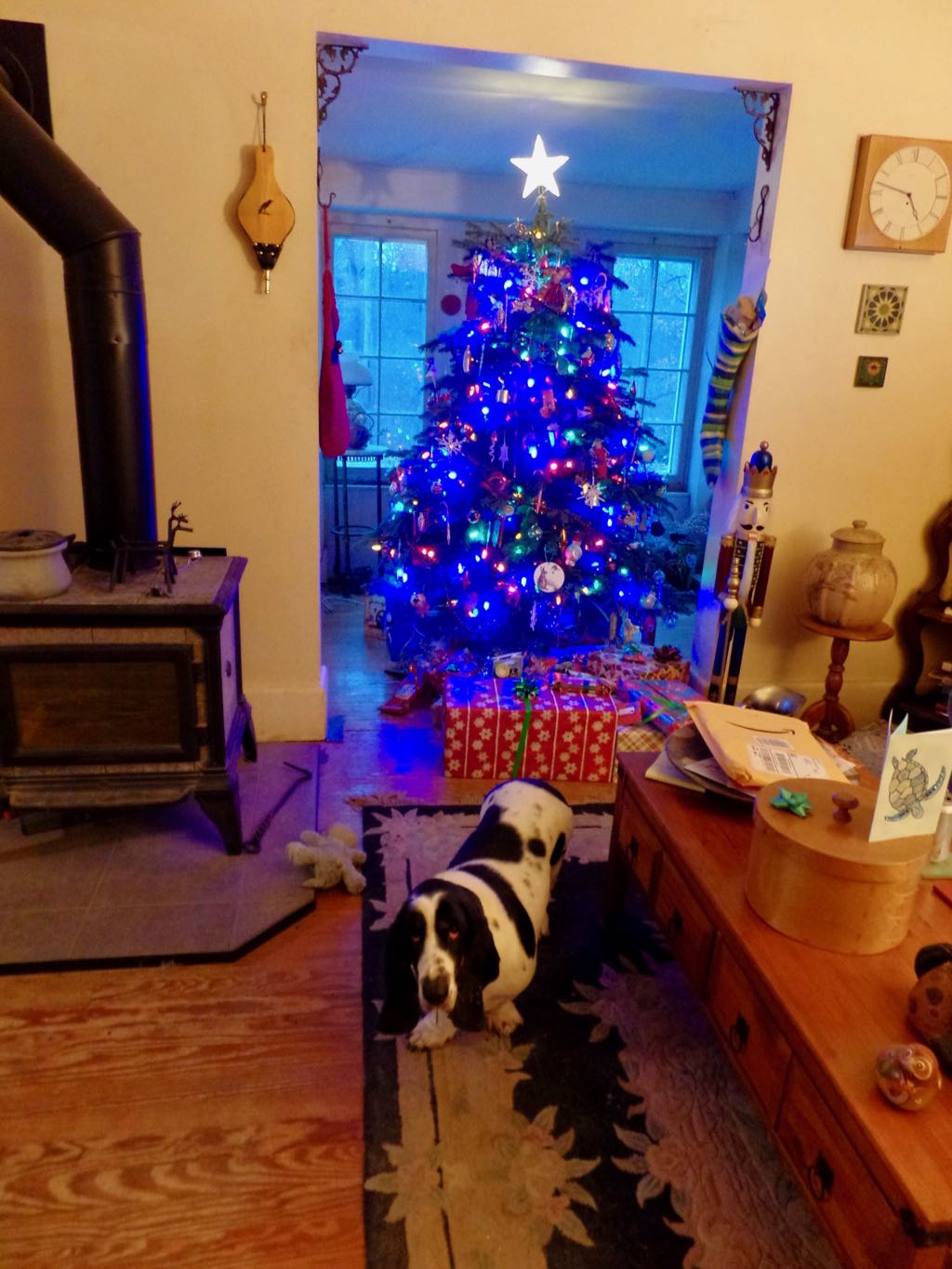 Her parents' home, and tree, and dog wondering why she has to endure a life with me in it. 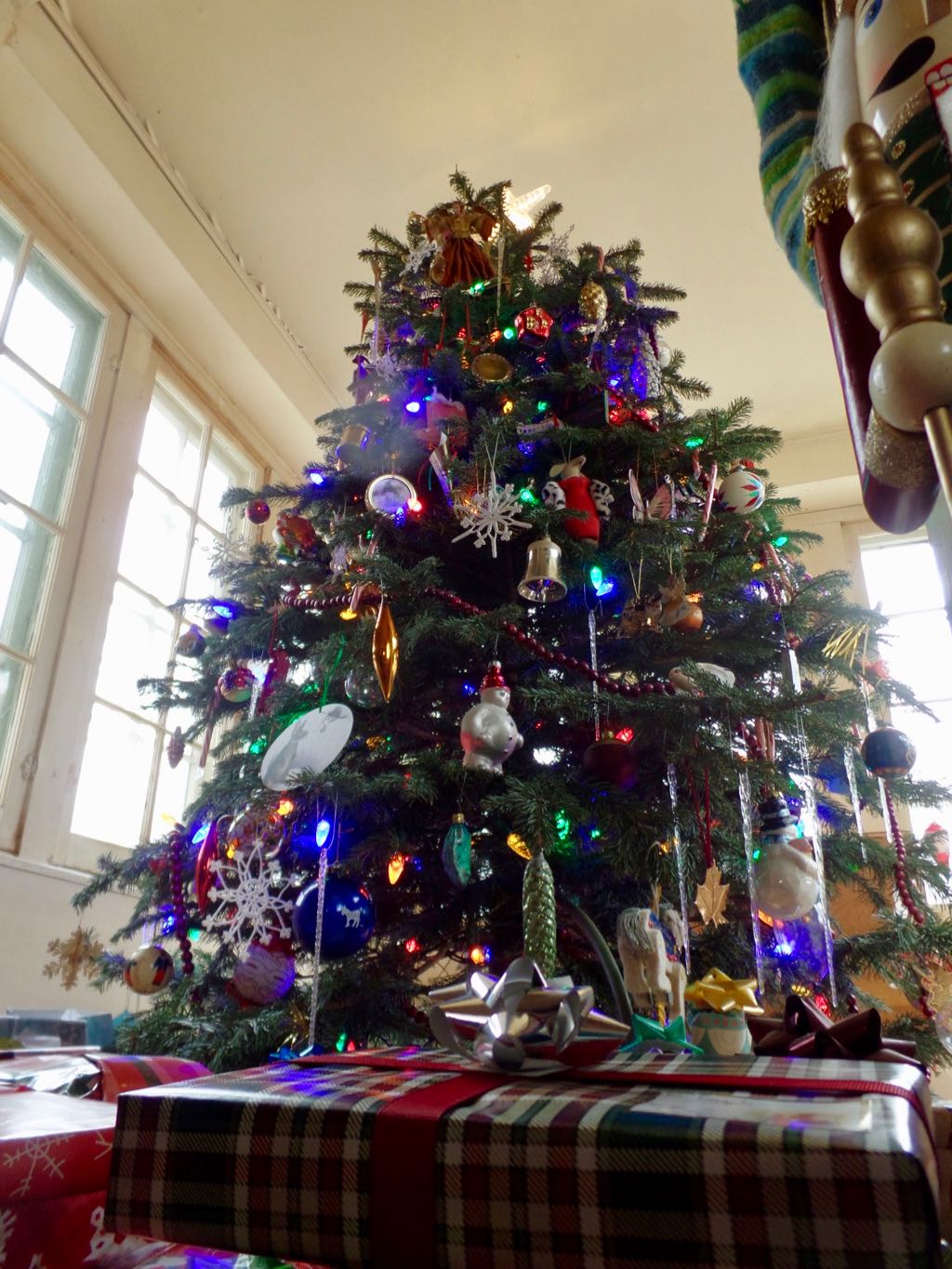 Their tree seen from below and in full daylight. 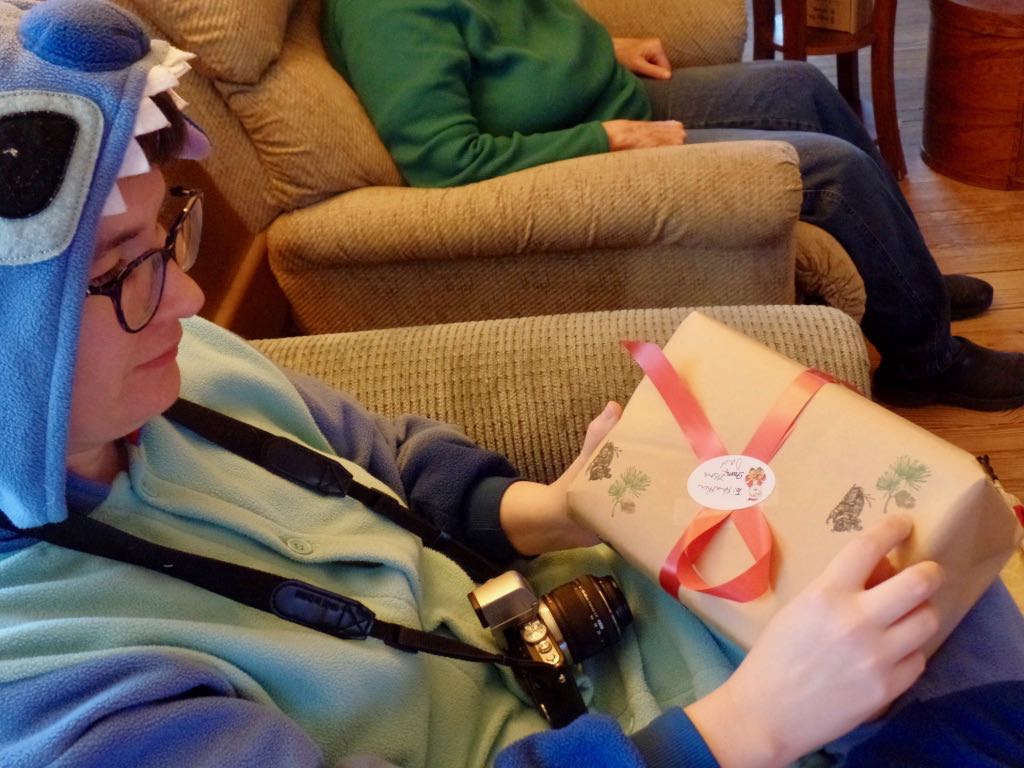 bunny_hugger, as Stitch, enjoying the opening of a gift from her parents. 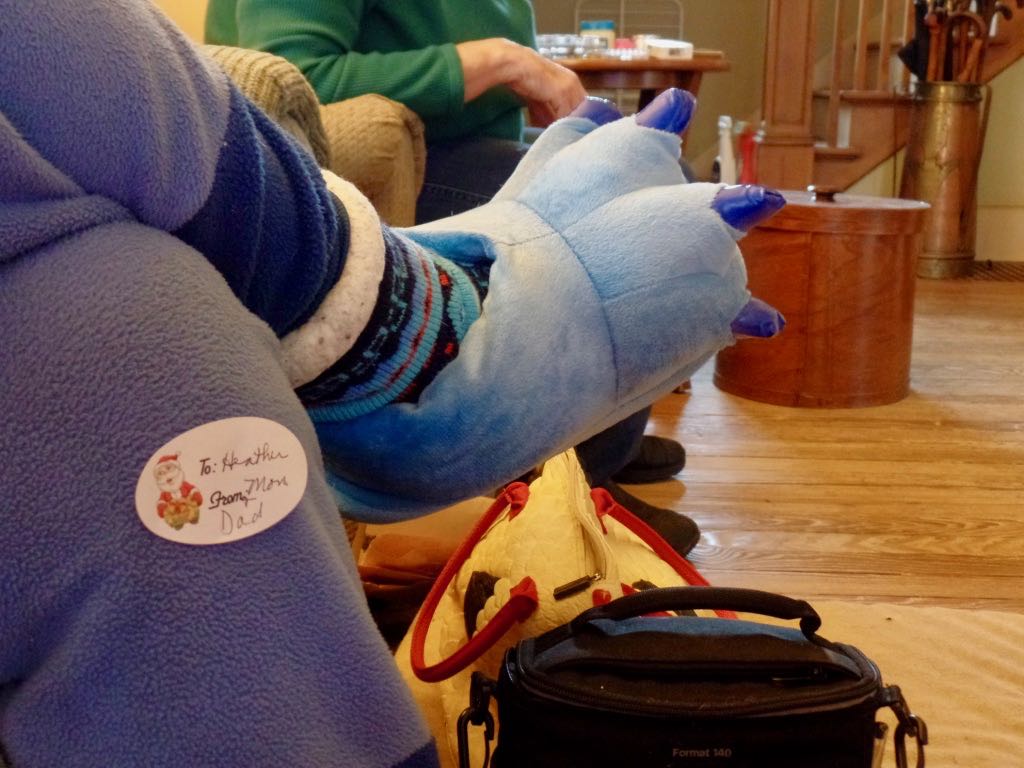 bunny_hugger is a gift herself! 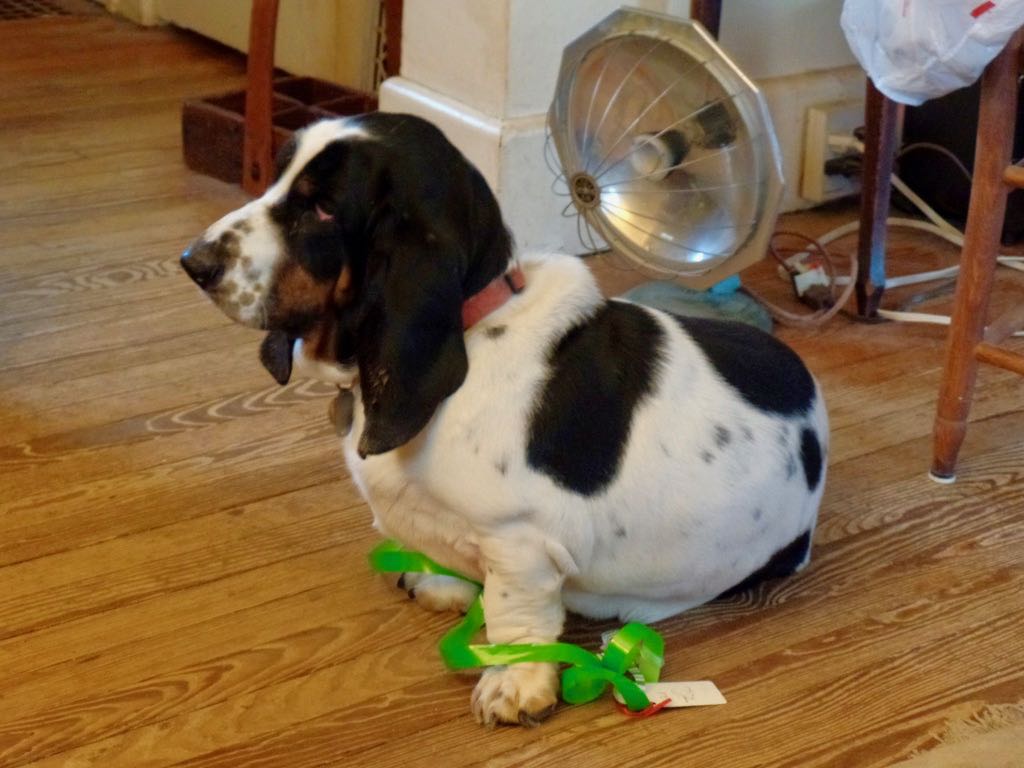 Her parents' dog (our dog-in-law?) is not at all happy dealing with the stray ribbons. 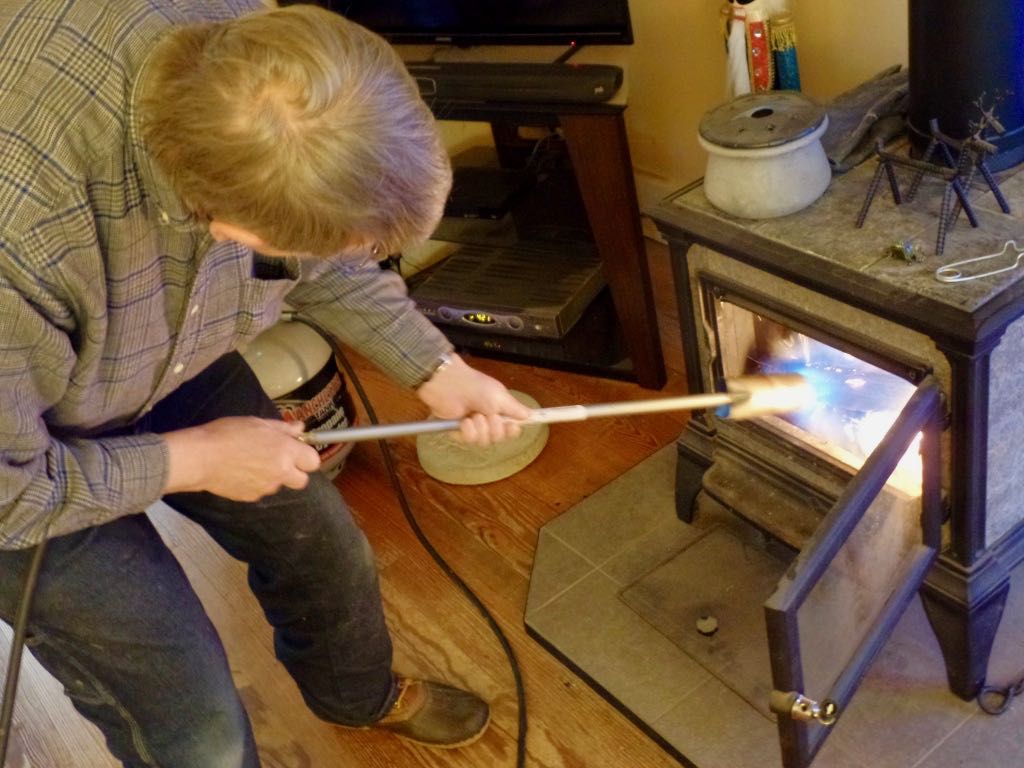 Her father lights the fireplace using a flamethrower, as one will. 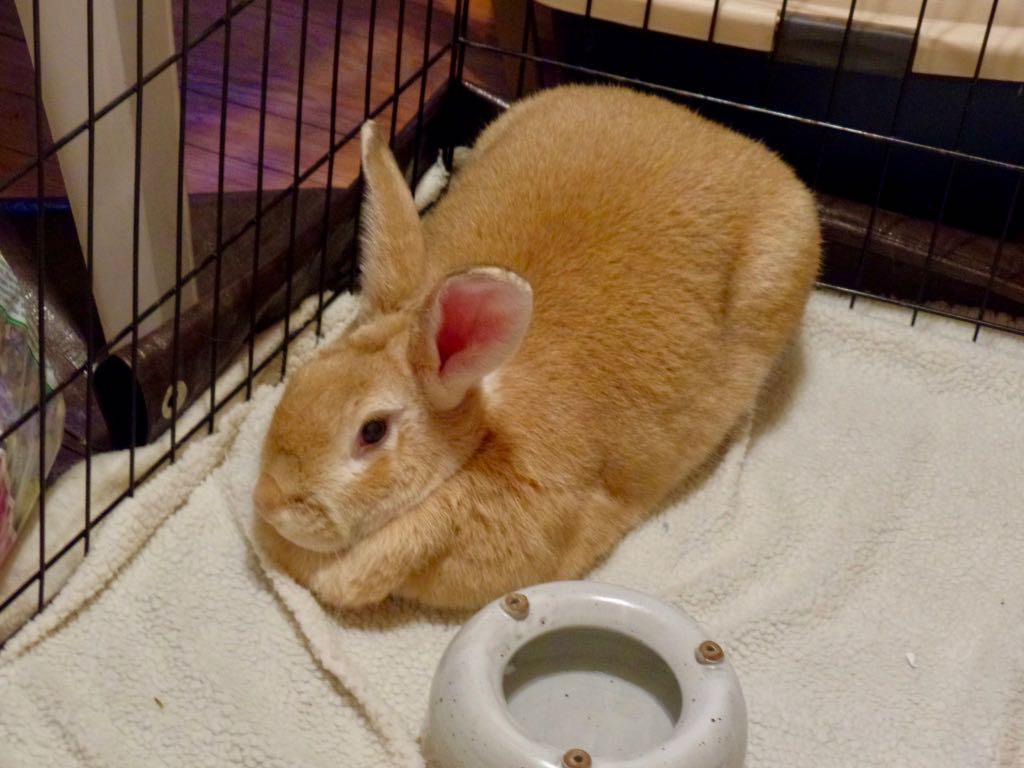 Sunshine came with us for Christmas, despite the bother of having to be put in her carrier and all that. 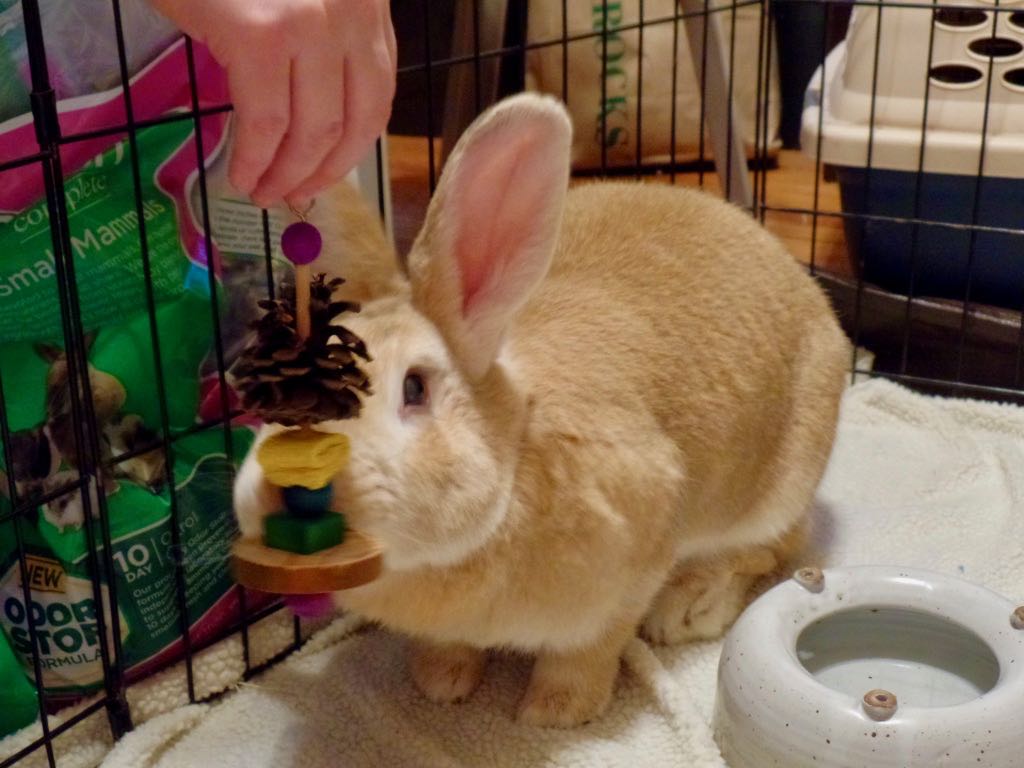 She is a little interested in her presents, though. 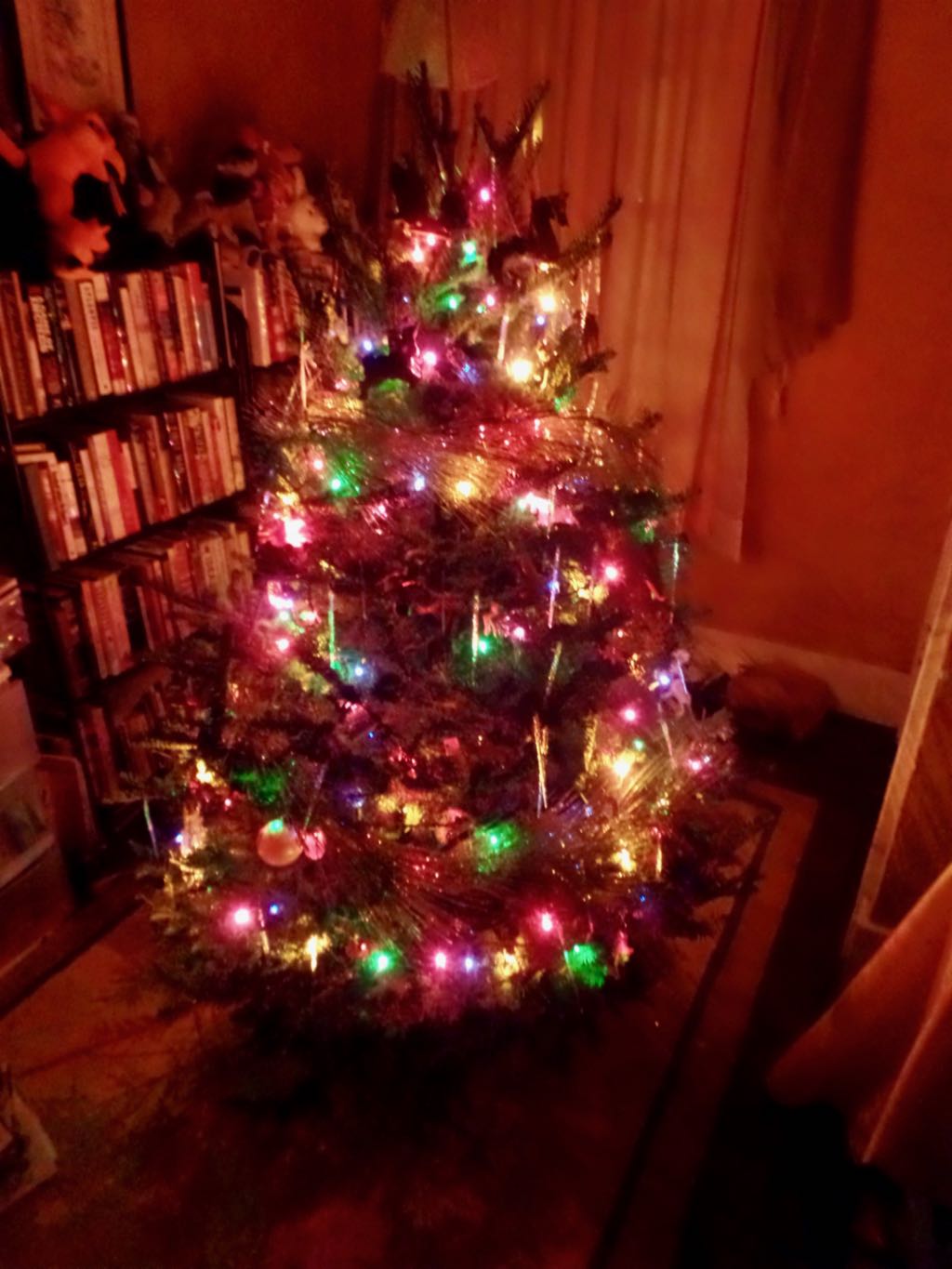 And, back home, a look at the upstairs tree decorated and lit by night.

Trivia: Pert Kelton (among other things the first Alice Kramden) was part of a family vaudeville act as a child. Later, she and her mother appeared as a ``sister'' act, Pert and Sue Kelton, which concluded with the two women doing vocal imitations of the trombone and clarinet. Source: The Encyclopedia of Vaudeville, Anthony Slide. (Pert also, in the performance, did impersonations of Charlie Chaplin and William S Hart.)

Currently Reading: Emblems of Exploration: Logos of the NACA and NASA, Joseph R Chambers, Mark A Chambers. Monographs in Aerospace History Number 56. So there's an Army Institute of Heraldry, and since 1957 any federal agency can call on them for advice on symbols and seals and iconography, which fills me with lovely silly thoughts. There's a lot I enjoy in the book, particularly all the graphic design stuff, but you can see where Chambers and Chambers aren't expert historical writers. It's small things, mostly ones about not connecting threads. Like, there's talk about how long it took the NACA to get a seal at all, and then how just five years later NASA got formed and got the Army Institute of Heraldry's advice. Why in 1958 and not 1952? ... well, because the Institute of Heraldry wasn't authorized to advise non-military groups until 1957, a thing clarified only in endnotes. It's a nice resource but it's not really a history yet.