Now everything is all right

So there's a rumor that M-Brew, a bar, might be shuttered for good. If that turns out, it'll be the first (major?) Michigan pinball venue lost to the pandemic. It's also, it happens, one of two major Michigan pinball venues we haven't been to. (The other's in Kalamazoo.) This isn't specifically because we're avoiding anyone or something; it's just that the location is pretty seriously into the Detroit metro area, and to get there for league we'd have to drive into city traffic during rush hour. Evening rush, so it wouldn't be as bad, but still pretty bad. And all that to get crushed by AJG, if he's suspended his retirement-from-competitive-pinball-forever-and-this-time-I-mean-it this week?

It's just a rumor, for now. But it's not one easy to shake off. Marvin's Marvellous Mechanical Museum --- having as it is a huge footprint and eighteen kajillion devices that all need maintenance, and a revenue base of ``large bunches of kids put in a cramped space for hours'' --- seems also very threatened.

The Lansing Pinball League's barcade hasn't reopened and doesn't plan to before July. But then a student bar in East Lansing that opened two weeks ago produced at least fourteen Covid-19 cases before they shut back down. Ingham County had gotten down to about one new case a day before this, a level where public gatherings start to seem not-obviously-crazy. This, though? It's a bad sign for any bars reopening, of course. It also suggests the reopening of campus is going to be an incredible and supremely avoidable disaster so that's exciting to watch for.

What do we always do after Christmas? Visit Crossroads Village, of course, and get a ride on a carousel ... but fast. Here's some pictures. 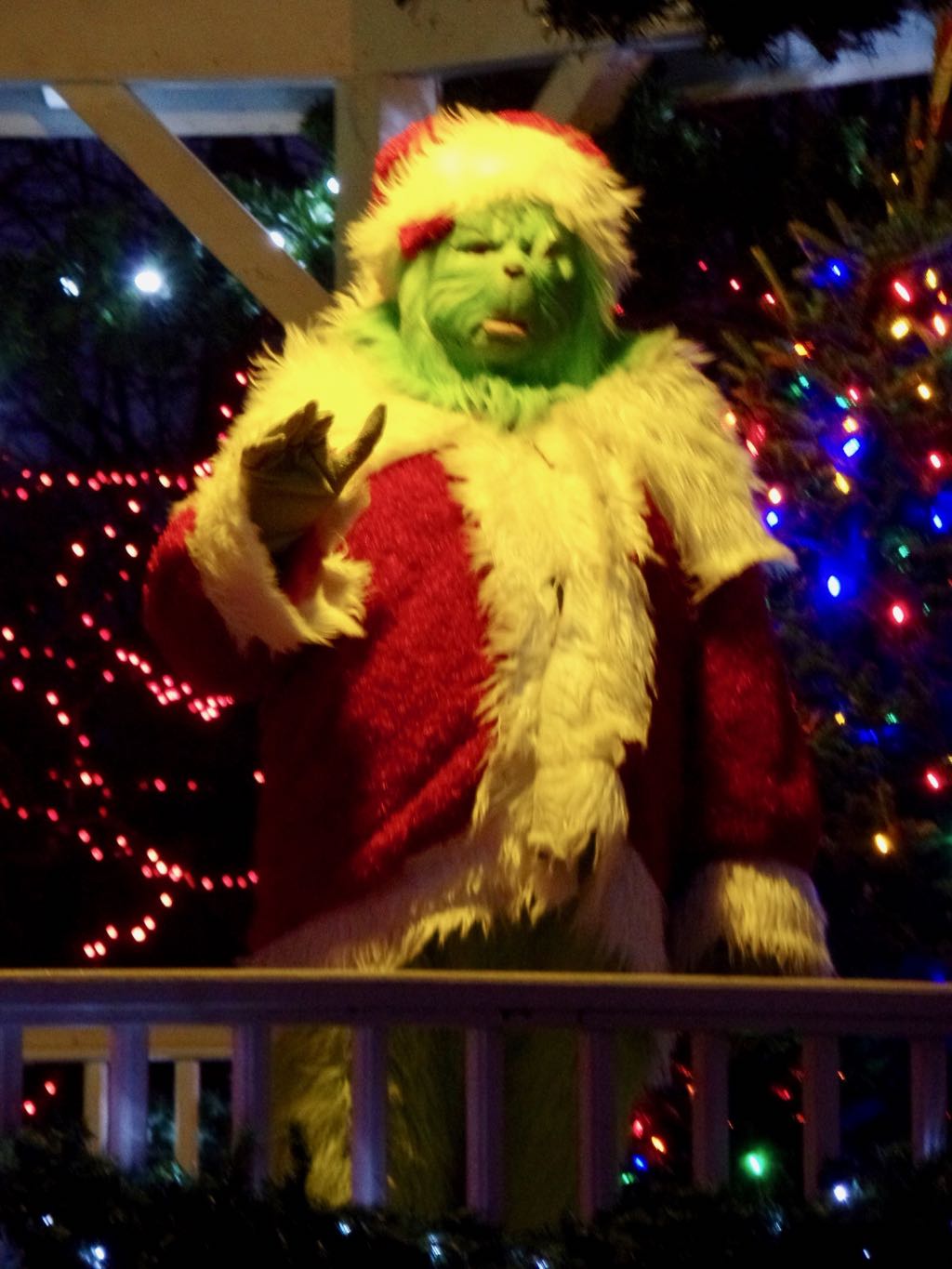 Crossroads Village had a special guest grump for 2018! He held court in one of the gazebos at a street corner. 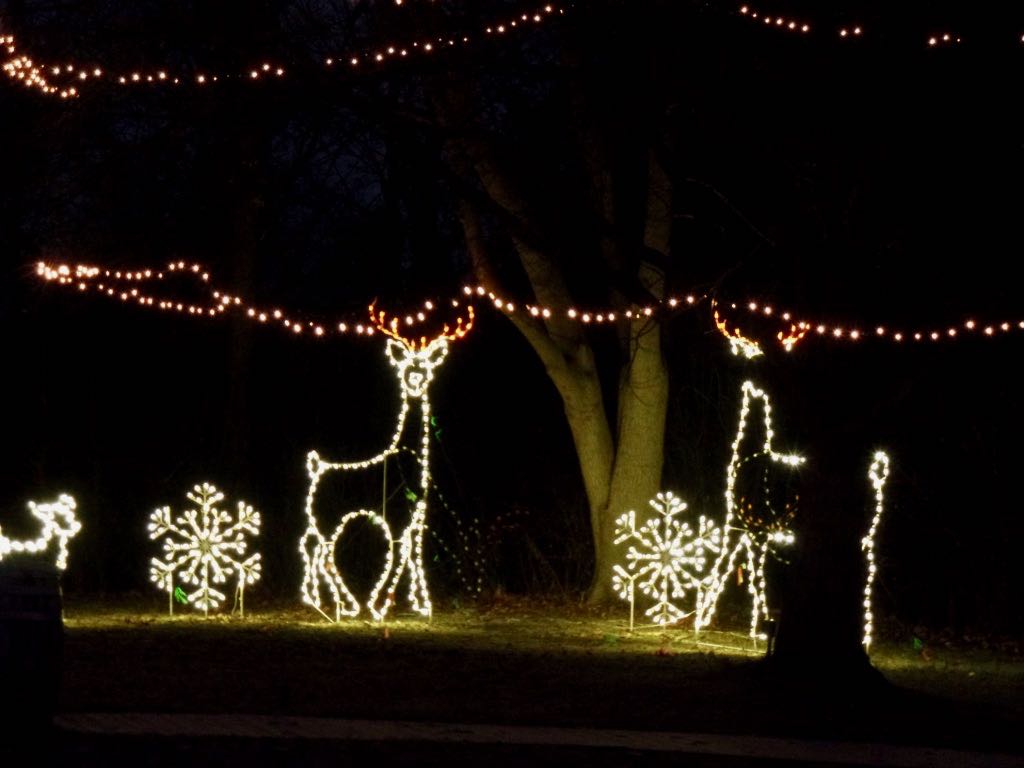 Animated deer-light fixtures; you can just make out for the one on the left where its head goes when it's 'grazing'. 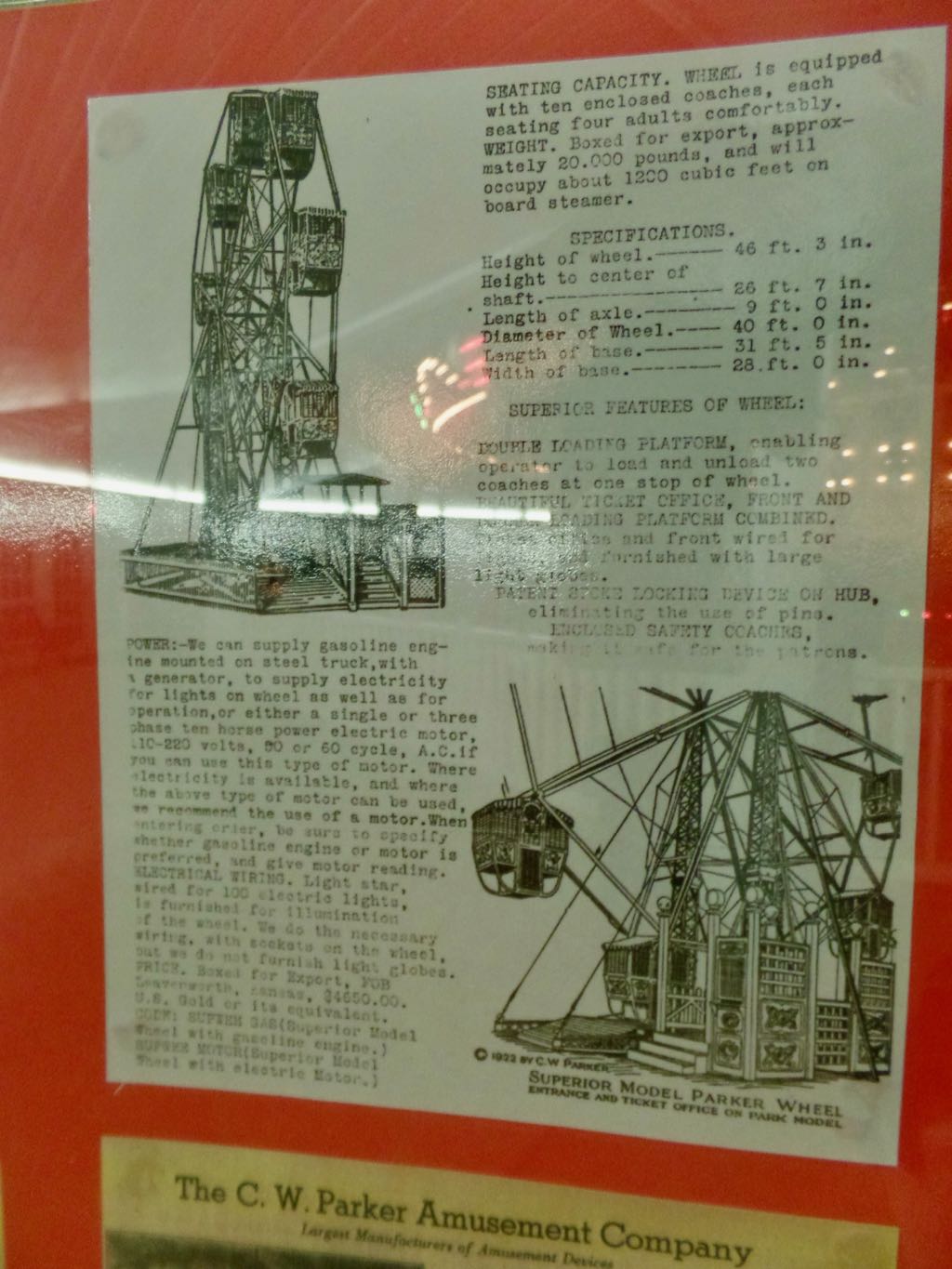 Catalogue page for C W Parker's Superior Wheel, the quite fast Ferris wheel they have at Crossroads. 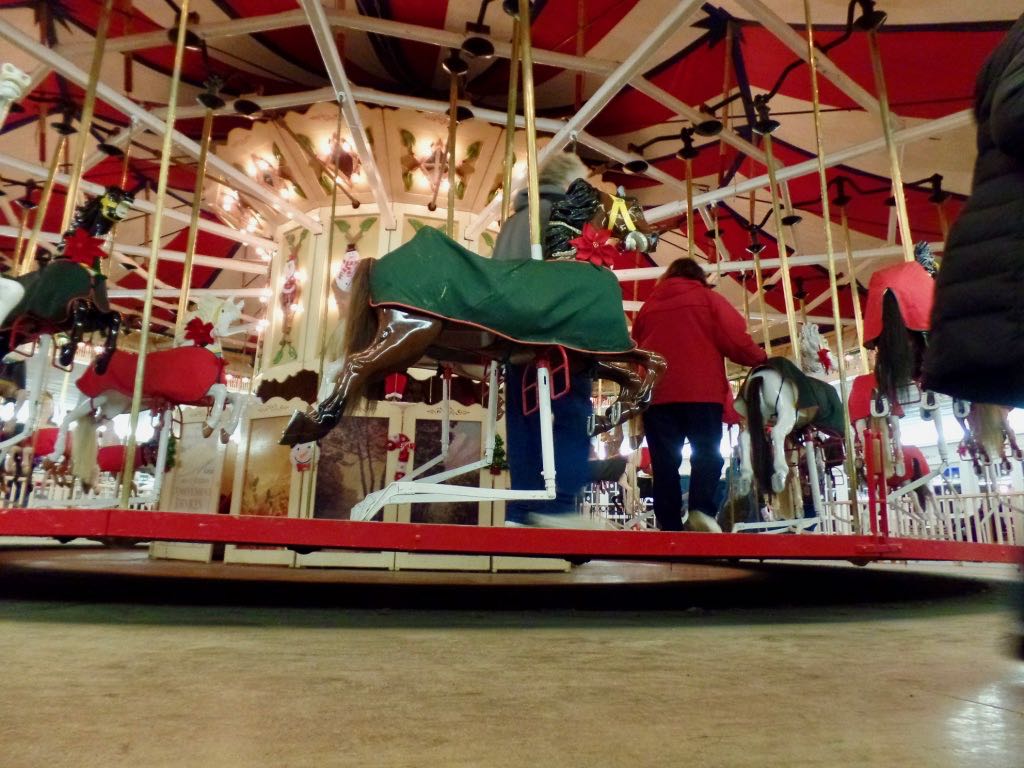 And here's their carousel, and the reminder that carousels don't actually rest on the ground! The horses, I think we learned that visit, have the red and green blankets less to be Christmas-y and more to keep snow and mud from being tracked onto the animals. 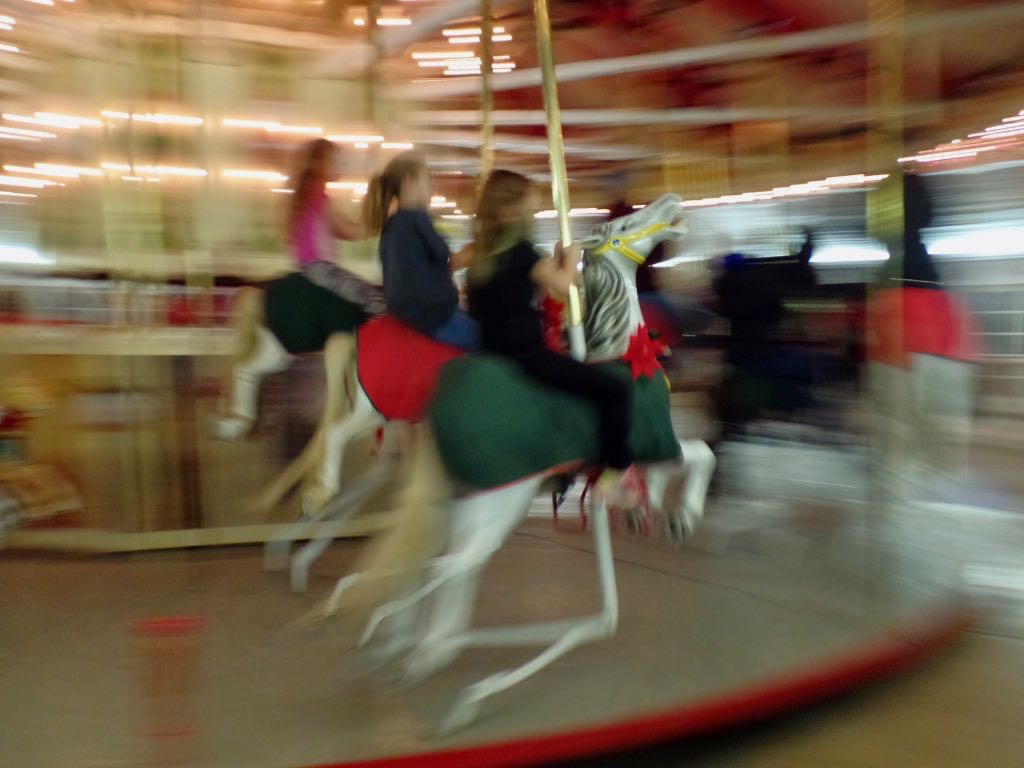 Did I mention the Crossroads Village carousel is the fastest in Michigan? Six rotations per minute, which is the speed where carousels become thrill rides. 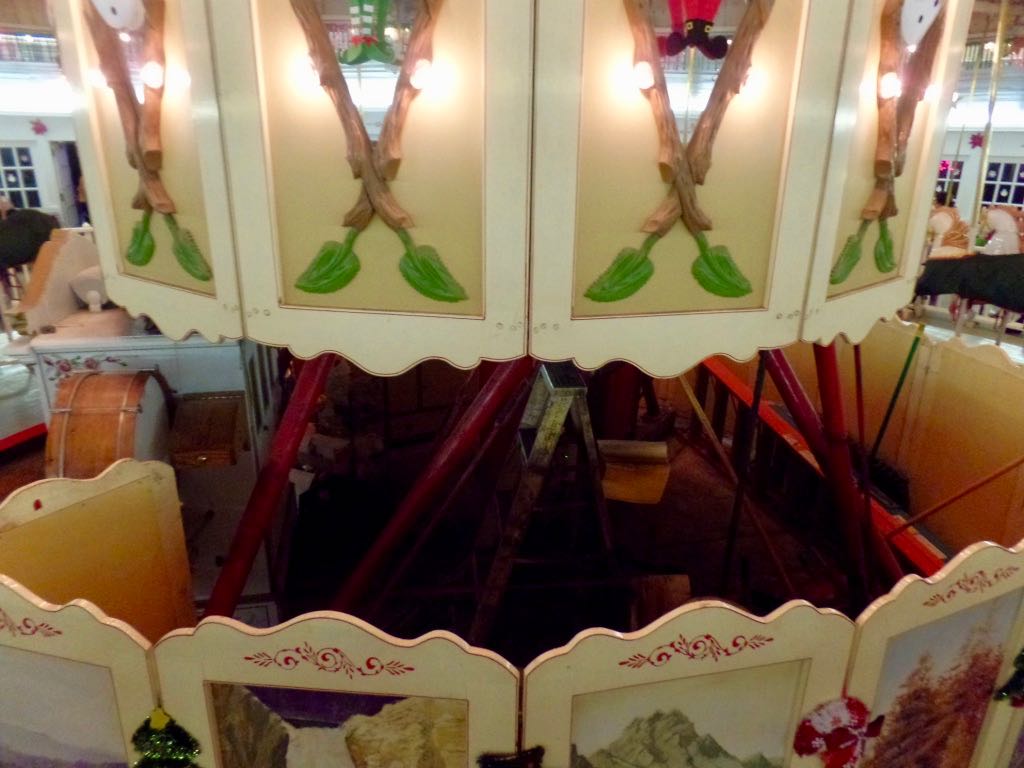 A quick little peek into the mechanism at the center, including a view of the band organ. 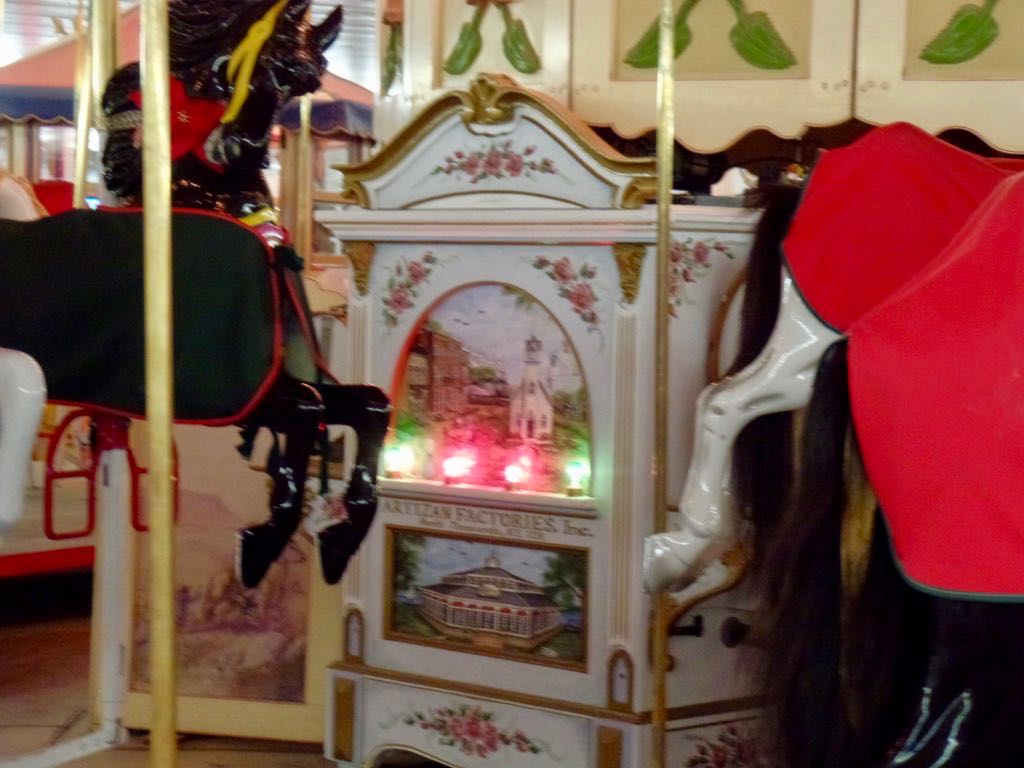 Here's a not-as-good-as-I'd-hoped view of the Artizan band organ. It's got a painting of the current carousel building on it, nicely. 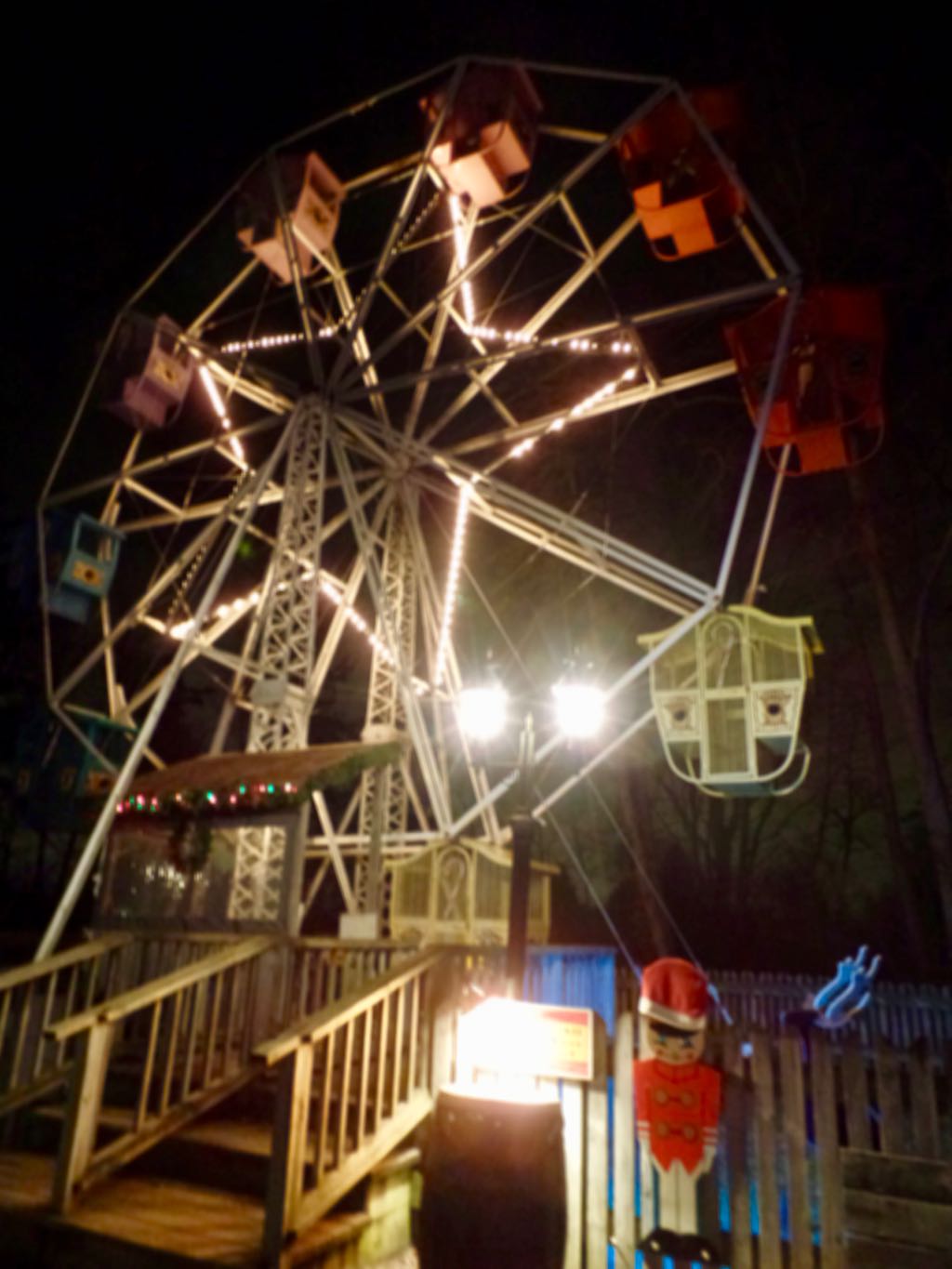 Here's the C W Parker Superior Wheel outside. It, too, is a fast one. 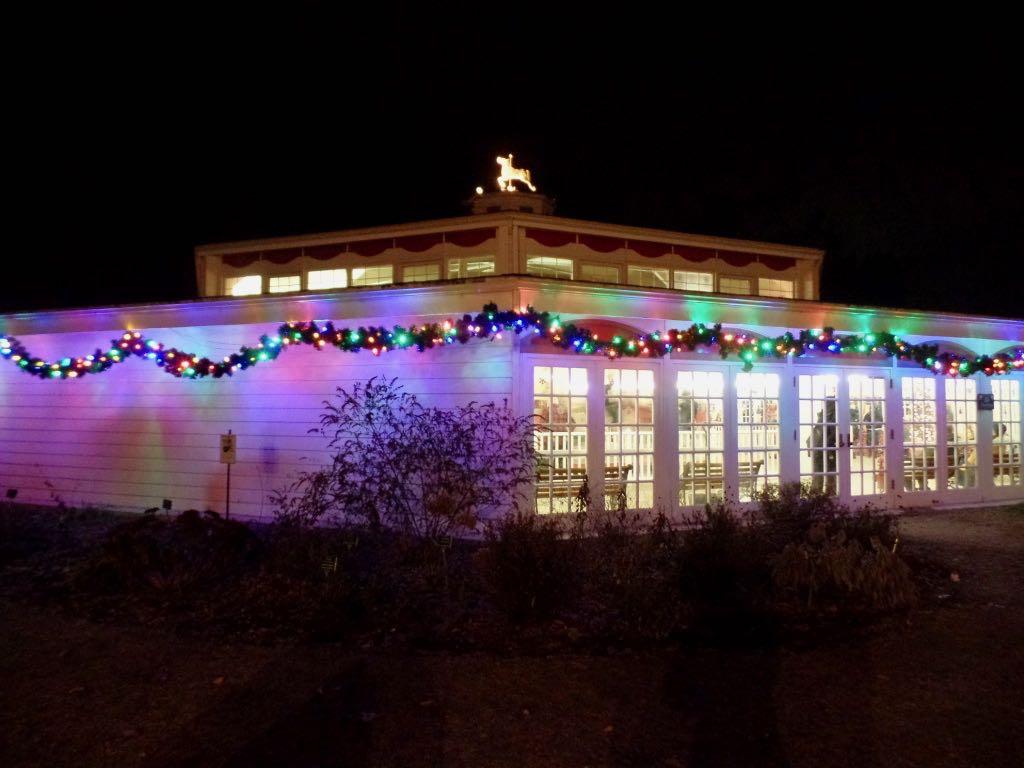 The carousel building seen from outside and lit partly by the decorations. 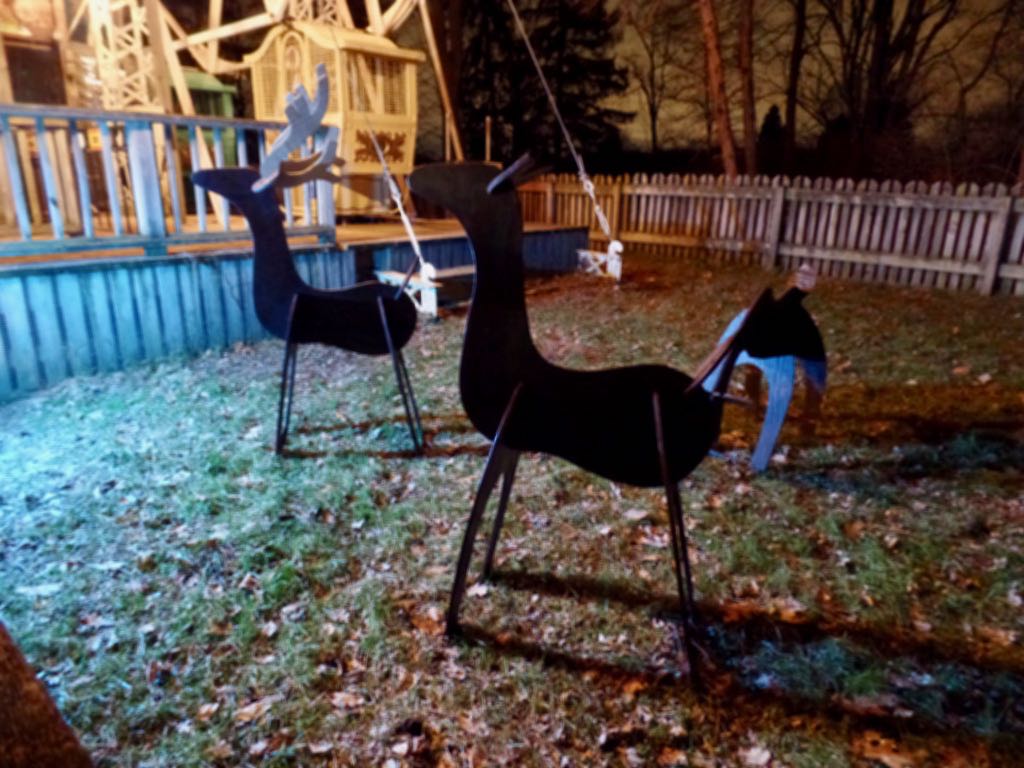 Fixed deer decorations set up by the Superior Wheel. 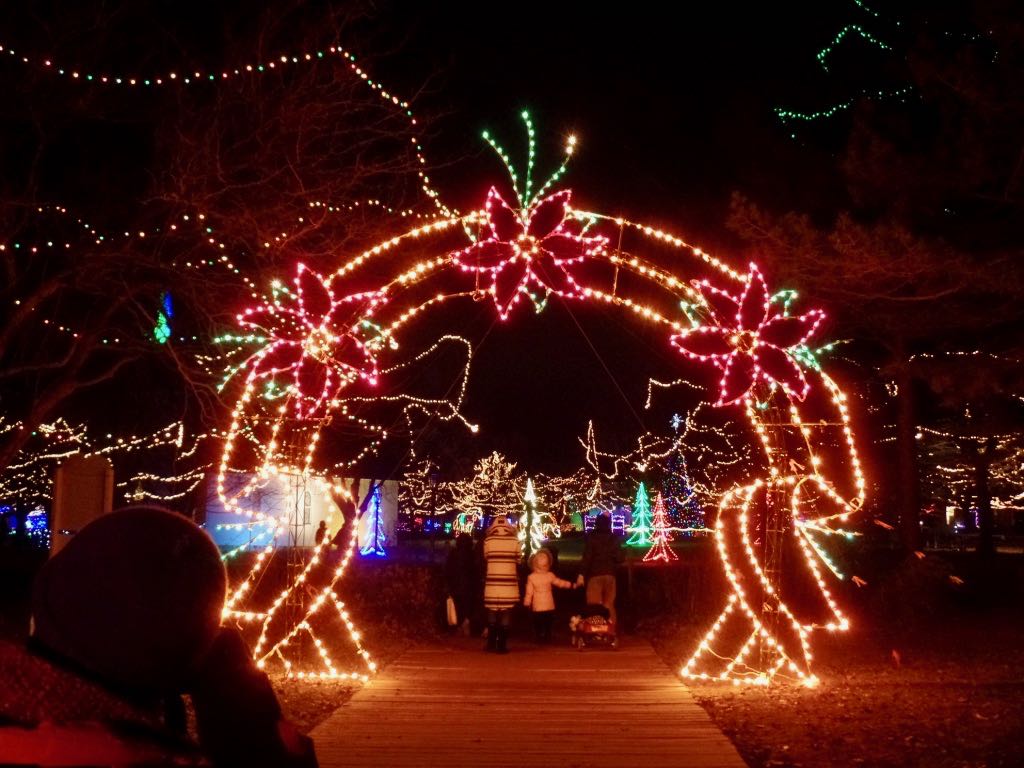 The lighted arch over the walkway into the carousel building, as seen from the carousel's side of things. 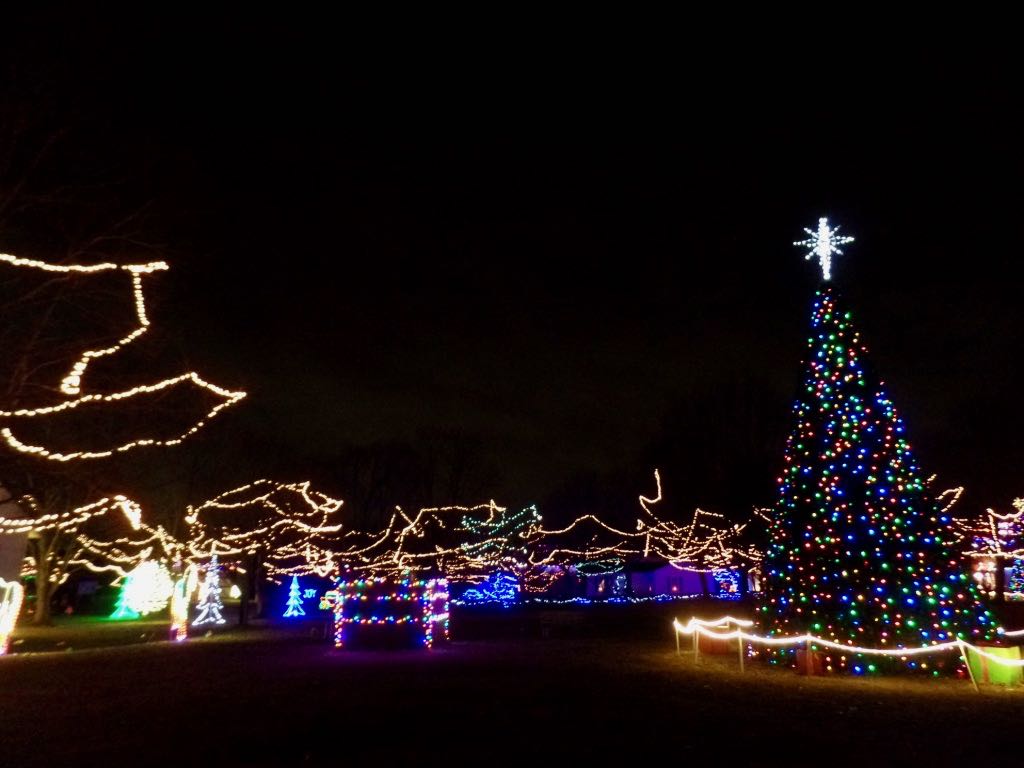 Christmas tree and some of the many decorated ordinary trees in that portion of the village. 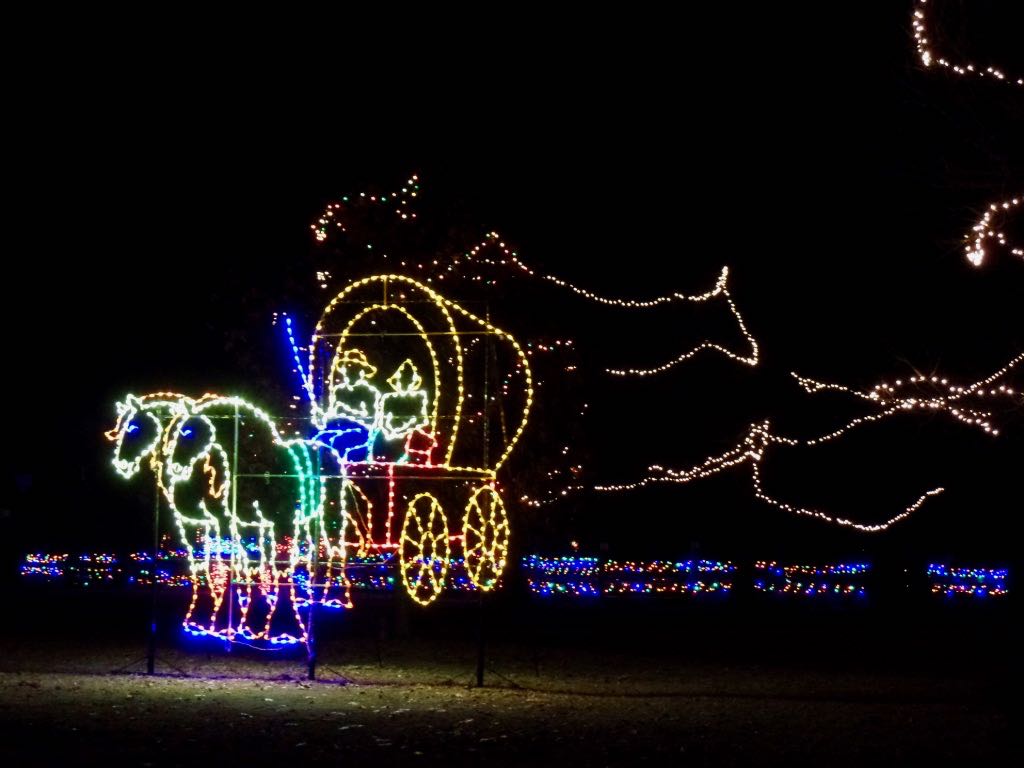 Christmas decoration of ... a covered wagon ... ? because holidays? 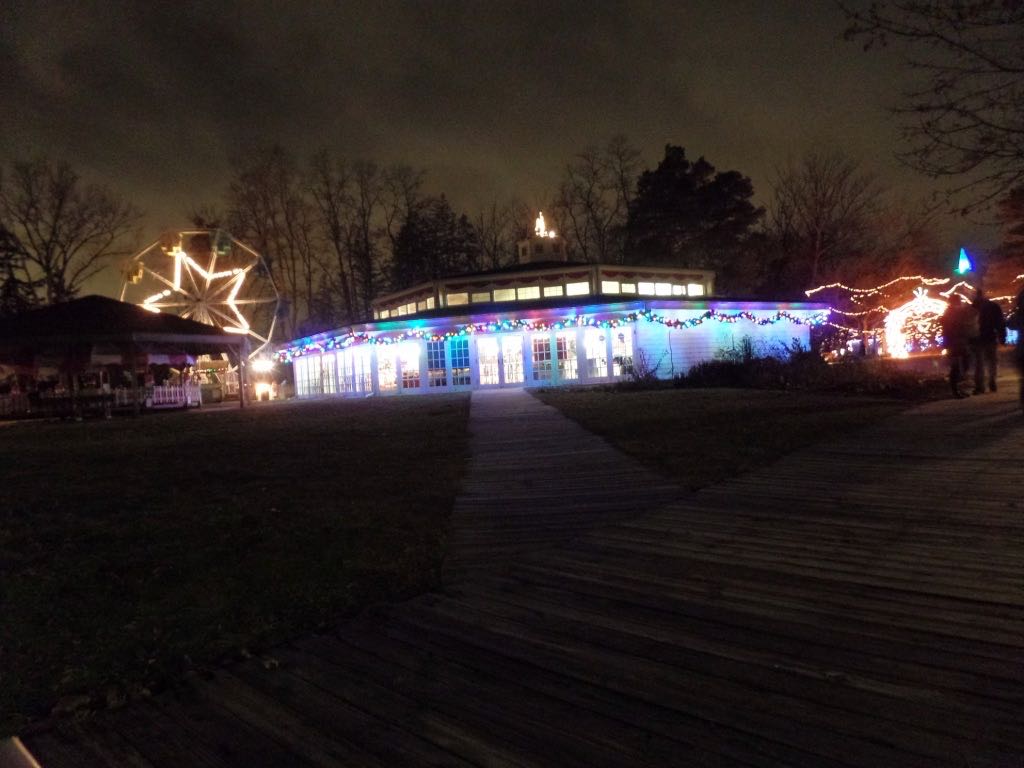 Anyway, one quick look back at the carousel building with the Superior Wheel in the background, and the arch leading to it over on the right. To the left, in the dark, are some other antique kiddie rides not used during the winter. 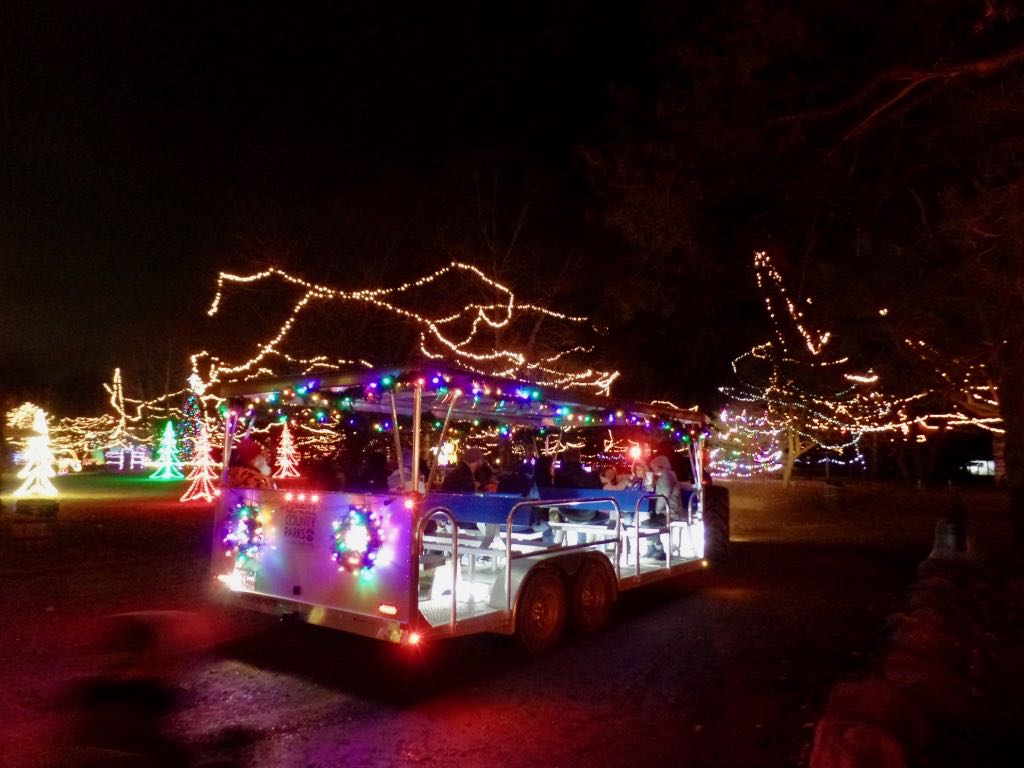 The lighted trolley that hurries people from the back to the front of the park, if they aren't up for the long walk. 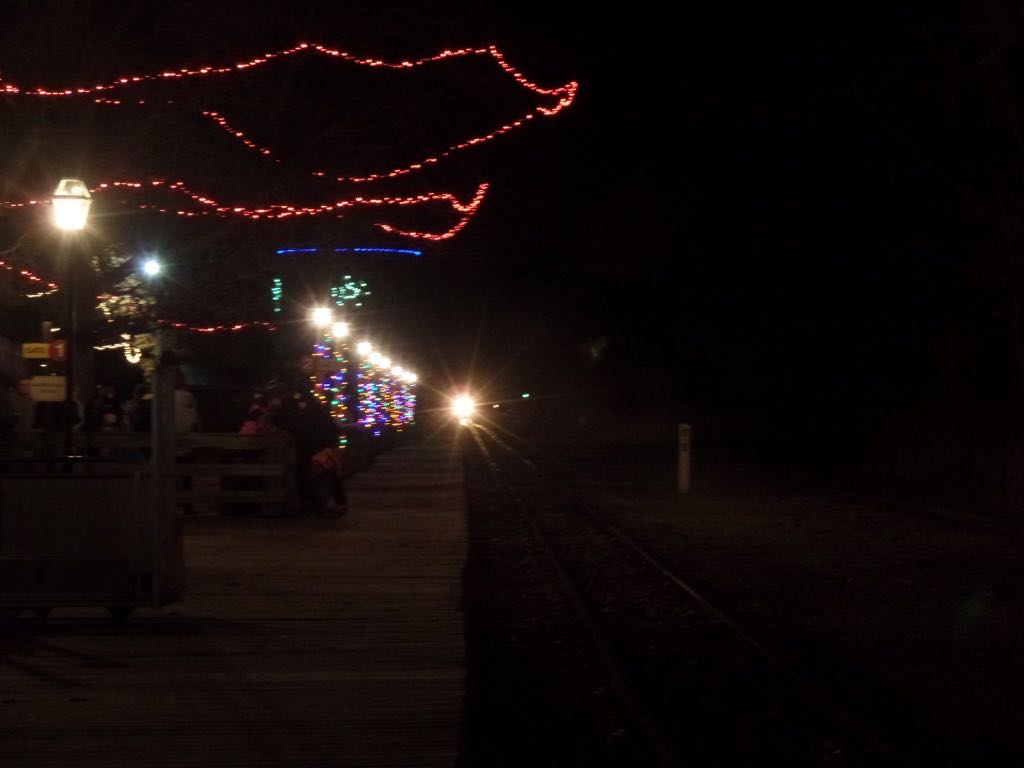 Ooh, what's that bright light? And heading right towards us? That must be a good thing!

Trivia: The New York World wrote that Hiram Maxim's 1895 1.5-horsepower car motor ``is one of the most serviceable ever built, as it will not explode''. Source: The King's Best Highway: The Lost History Of The Boston Post Road, The Route That Made America, Eric Jaffe.

Currently Reading: Lady Into Fox, David Garnett. A 1922 novella that I got on my iBooks somehow, I don't remember. It's about a man whose wife one day just turns into a fox, like it says. It's got some callous killing of animals in it, so be advised if you think about reading it. But it's an interesting transformation story, not least as the woman seems to be turning more animal over the course of things. Unlike every furry tf story ever, though, it's told from the man's perspective, so he's got this struggle of trying to understand some big mental changes from someone he loves and who can't communicate any of them.