Run to the light of nights

I returned my books to the city library today. Douglas Preston's The Lost City of the Monkey God and Martin W Sandler's Lost To Time: Unforgettable Stories that History Forgot. I remember when I got them, the first week of March, thinking that maybe I should get a third book, but also that I probably wouldn't finish all that many books before they came due, not with me also having two books out from the university library.

But the Capital Area District Library is opening up, slowly, for this little window before we have to lock down again. They started taking returns and doing curbside pickup this past Monday; everything that had been checked out is due this coming Monday. I figured to beat the rush. I didn't borrow anything, but I might while the window is open.

I remember when I checked them out thinking that the City Library, main branch, wasn't all that far and maybe I could try walking to it over the summer. I didn't think that was likely to happen --- it's a mile and a half one-way --- but maybe I'd get to the nearby Foster Branch library --- three-quarters of a mile one-way --- on foot. Under lockdown daily walks became one of my habits and the Foster Branch was the first thing I tried walking to. Now the main library proves to be so near. The Michigan State University library is about two and a quarter miles one-way, and now that doesn't seem really far at all either.

Back to Crossroads Village 2018. Here's the finish of the railway trip, the show we went to afterwards, and some wandering around town to close out the night. 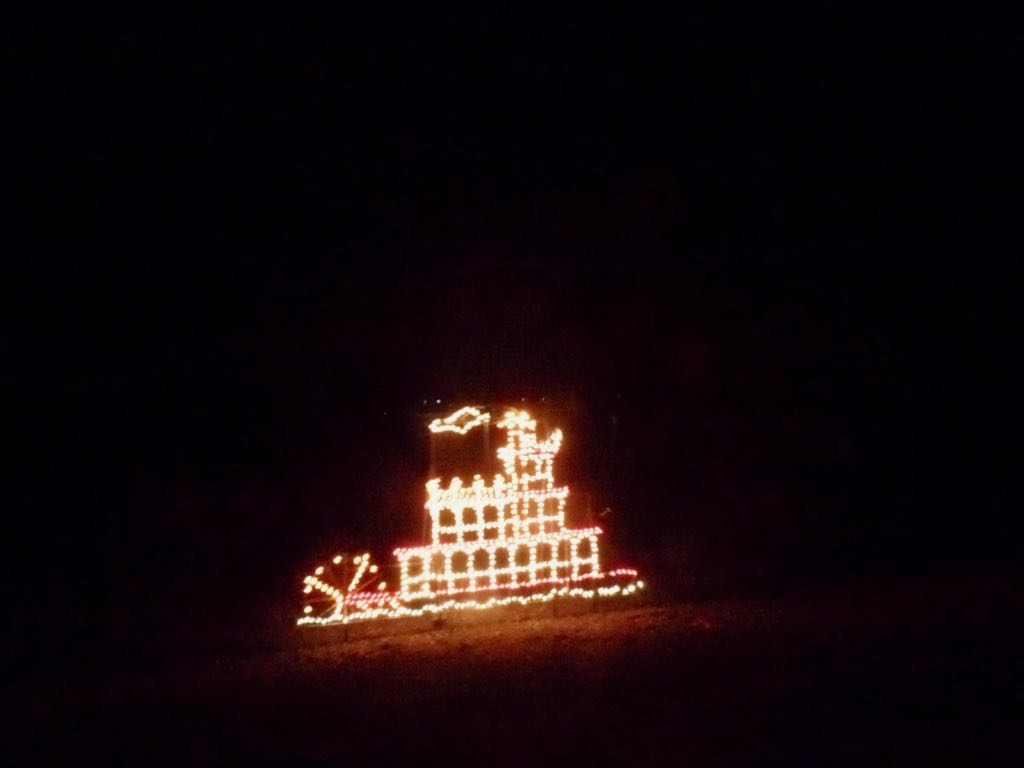 And here's their riverboat fixture, which they identify with the Genesee Belle, their boat that runs during the summer. 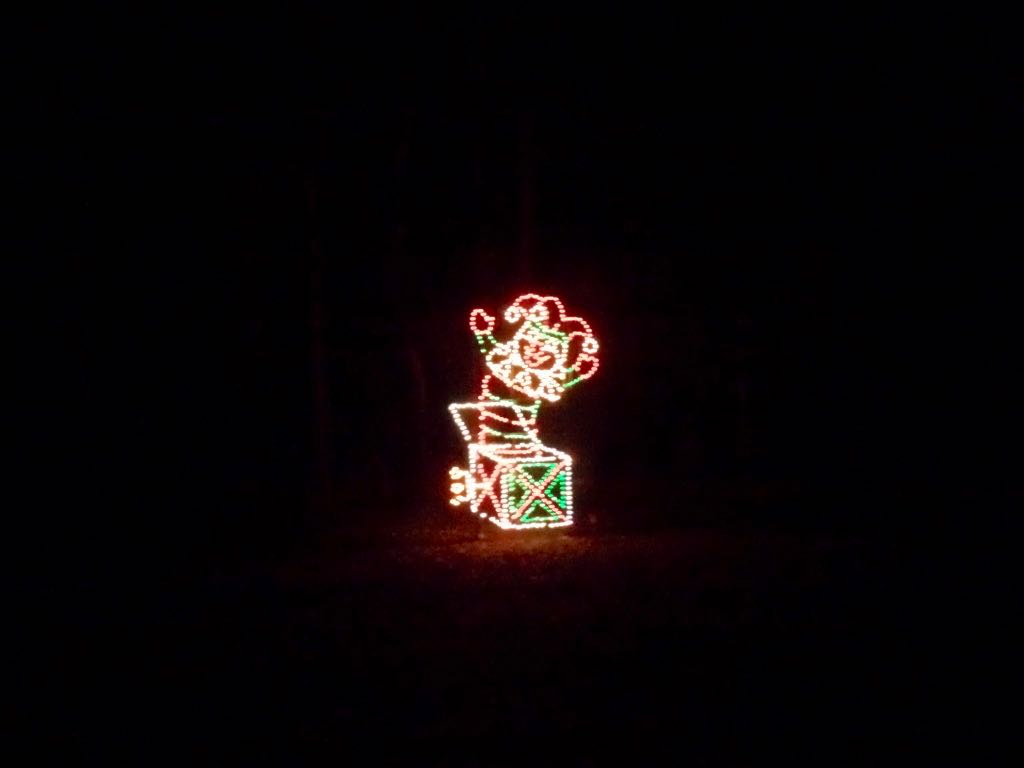 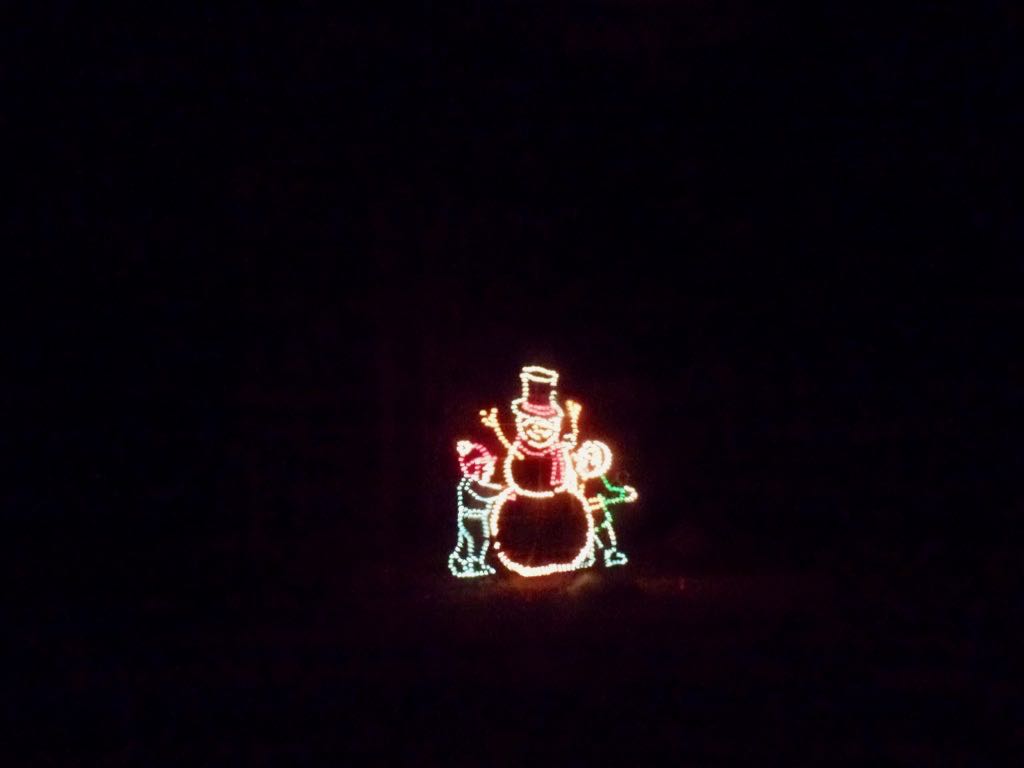 This is a nice one of kids building a snow figure. 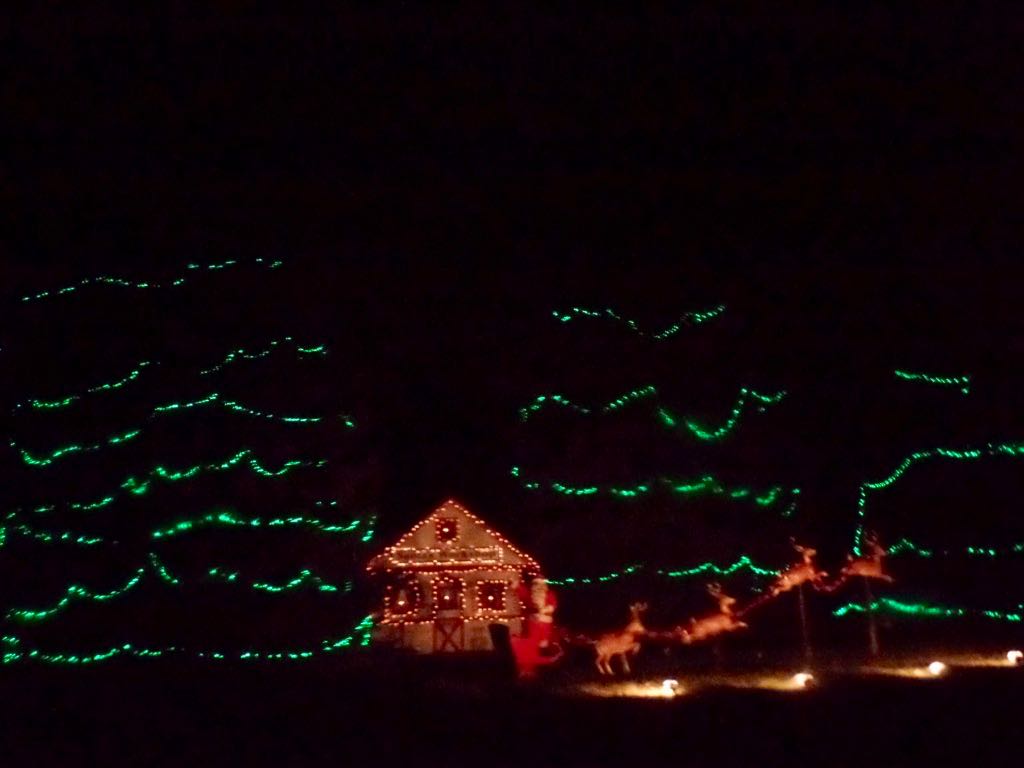 And here's the real Santa Claus! They have a fellow who comes out and waves at the train both times it passes and

bunny_hugger did not realize for a while it was a real live person, not an animatronic. 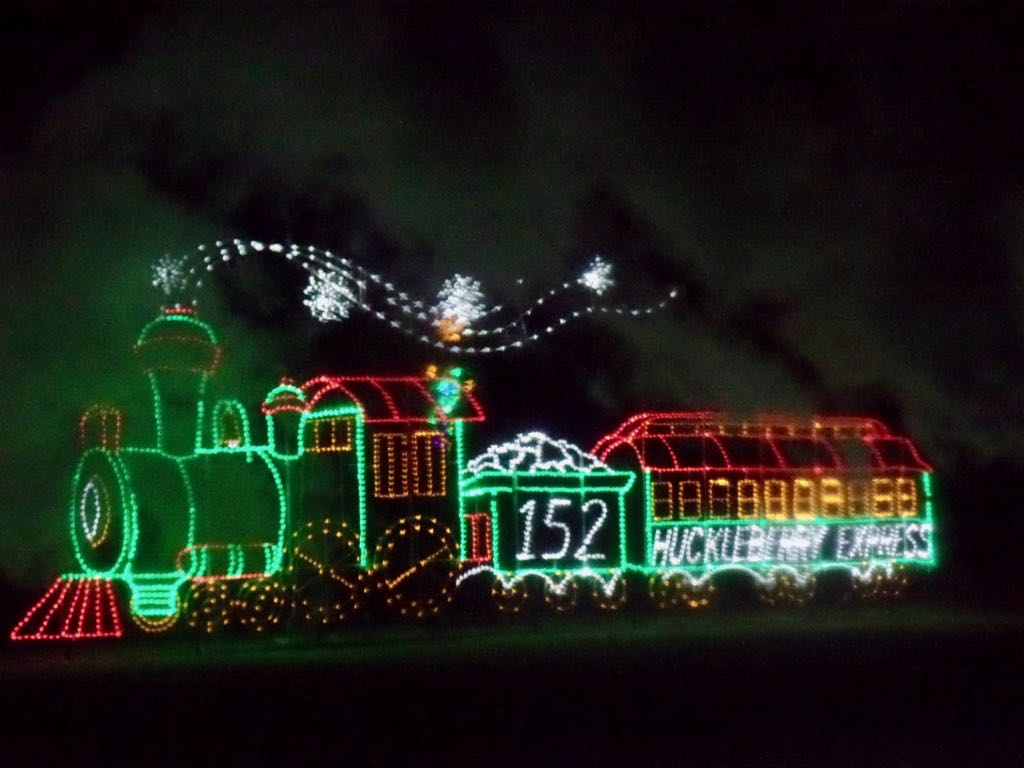 Another train in lights, this one representing the train we're on. 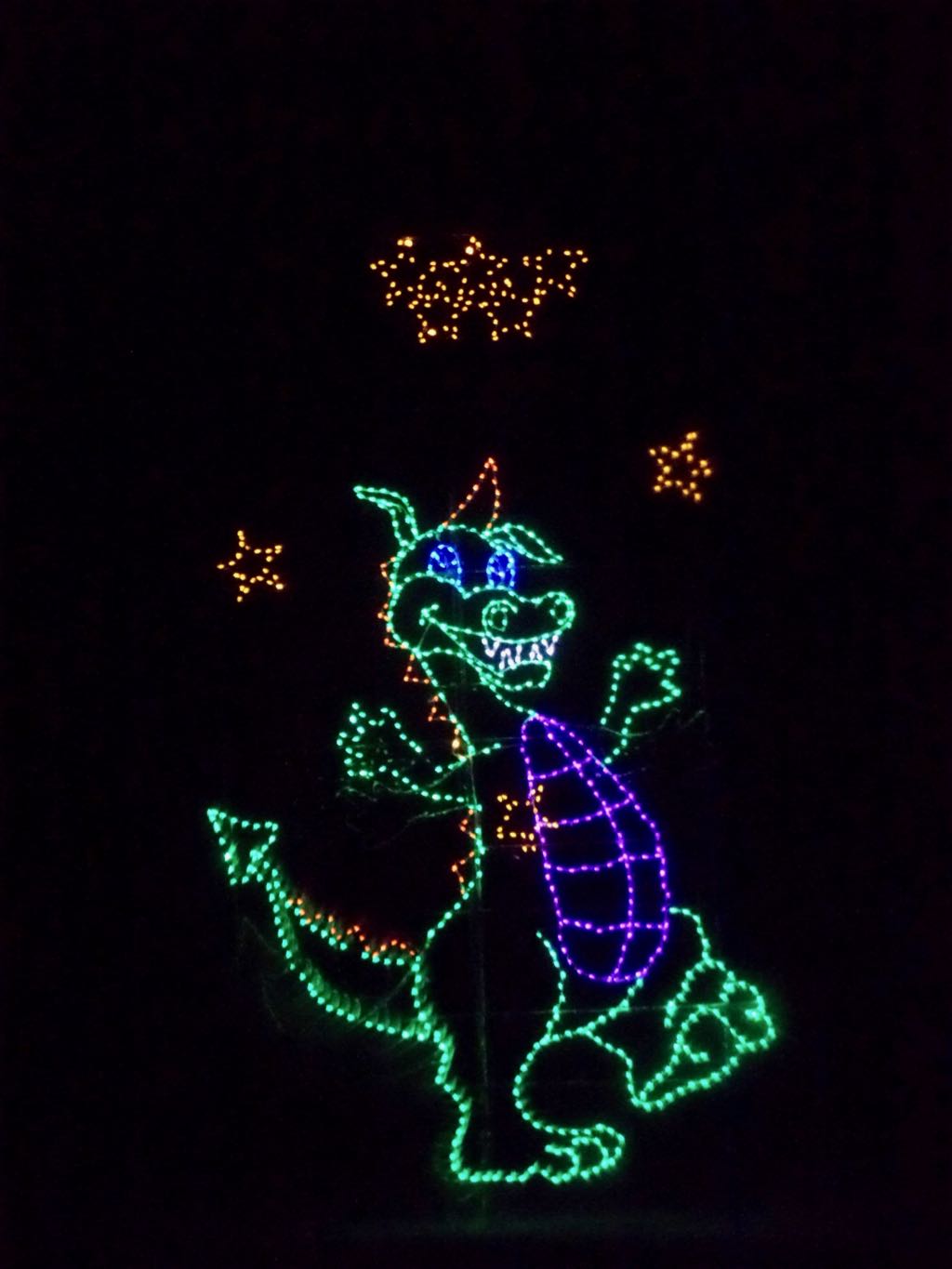 And their Christmas dragon! The conductor's spiel no longer explains how they had bought this for their Halloween lights show, and it arrived late, so it became the Christmas dragon. I won't forget, though. 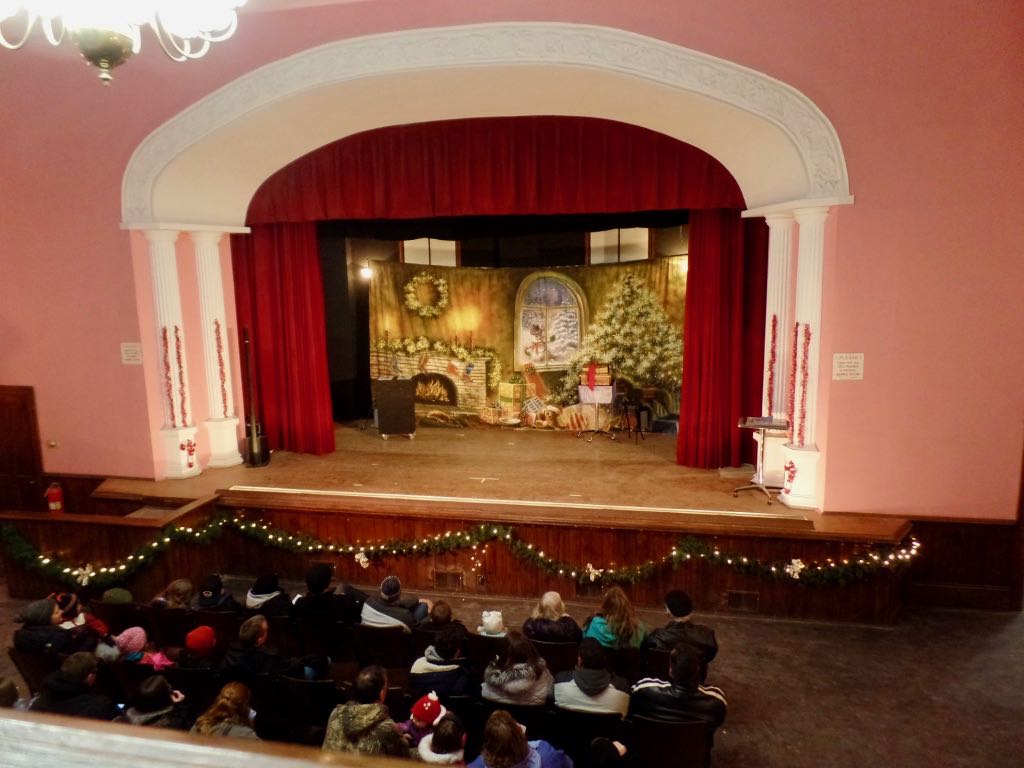 After the ride we went to the opera house to enjoy the show, which turned out to be a magic show rather than the expected Christmas Melodrama. The background makes it look like they're still ready to do a Christmas Melodrama, they just haven't. 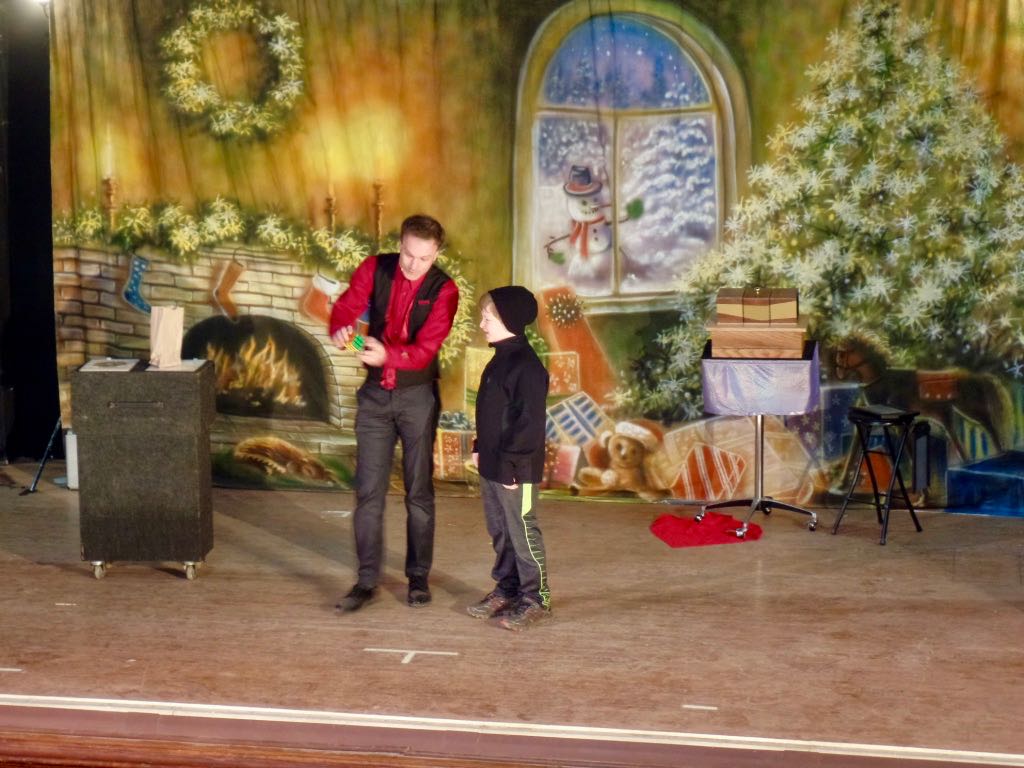 Magician getting ready to do his Rubik's Cube trick, that of tossing a cube in the bag and having it somehow copy the moves the kid made. 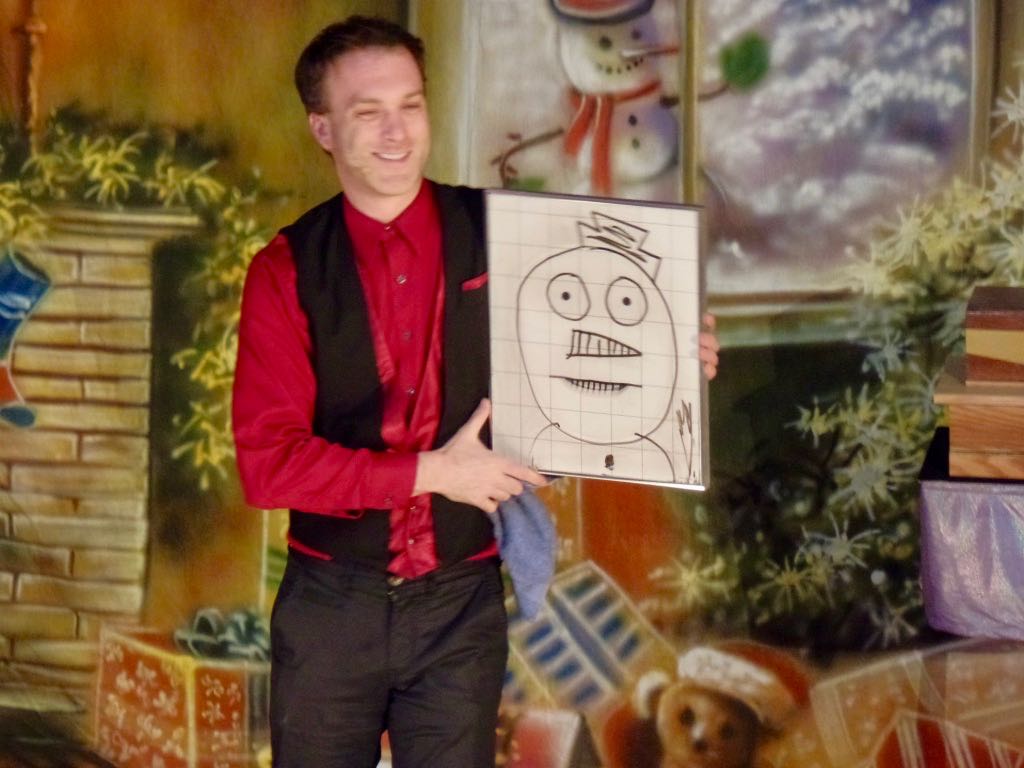 The trick where a sketch transforms into a real picture. 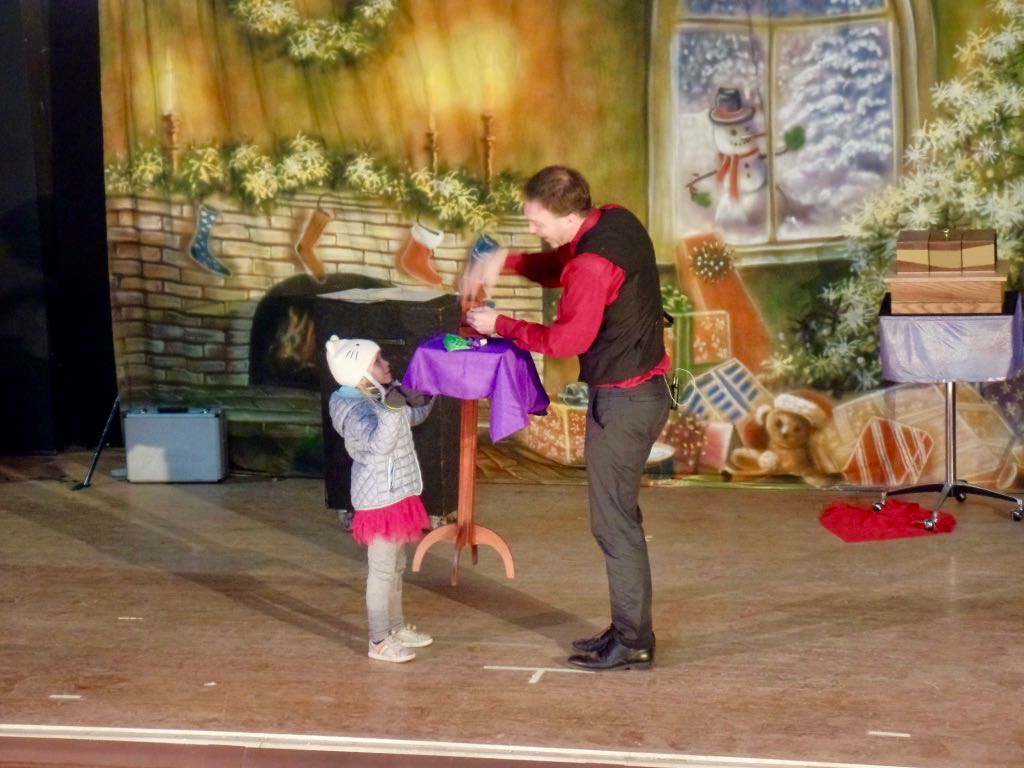 A trick with a kid on stage. I forget what the trick was but the table floating in air was a good part of the magic. 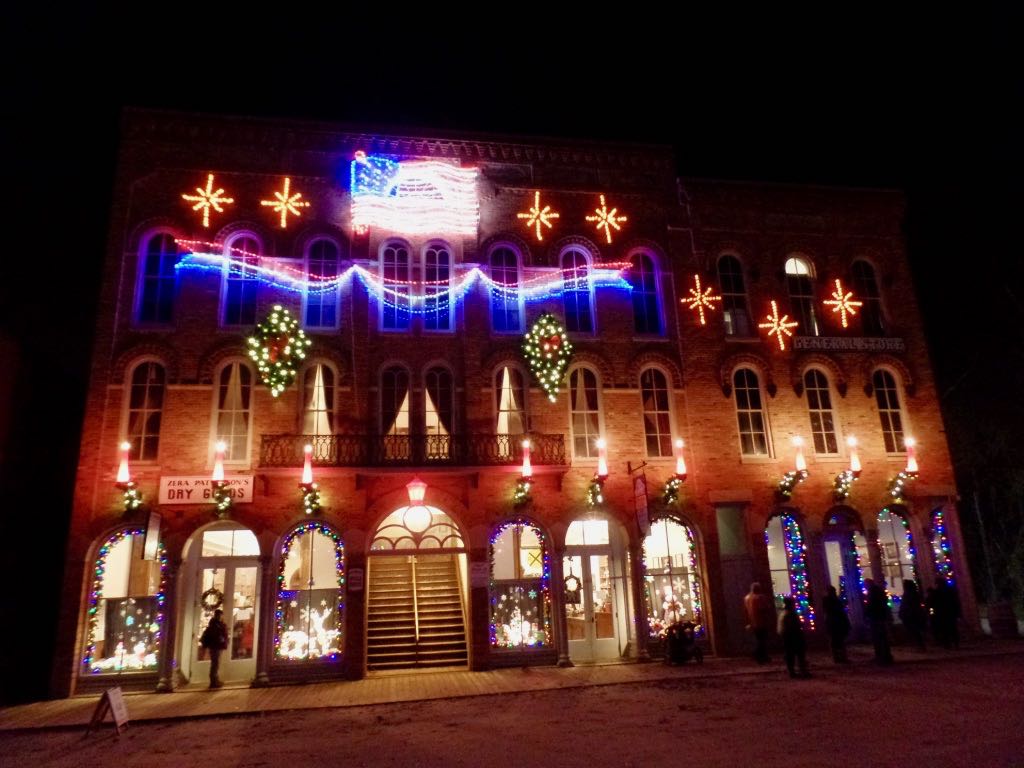 And here's a view of the opera house, and the gift shop, from outside. 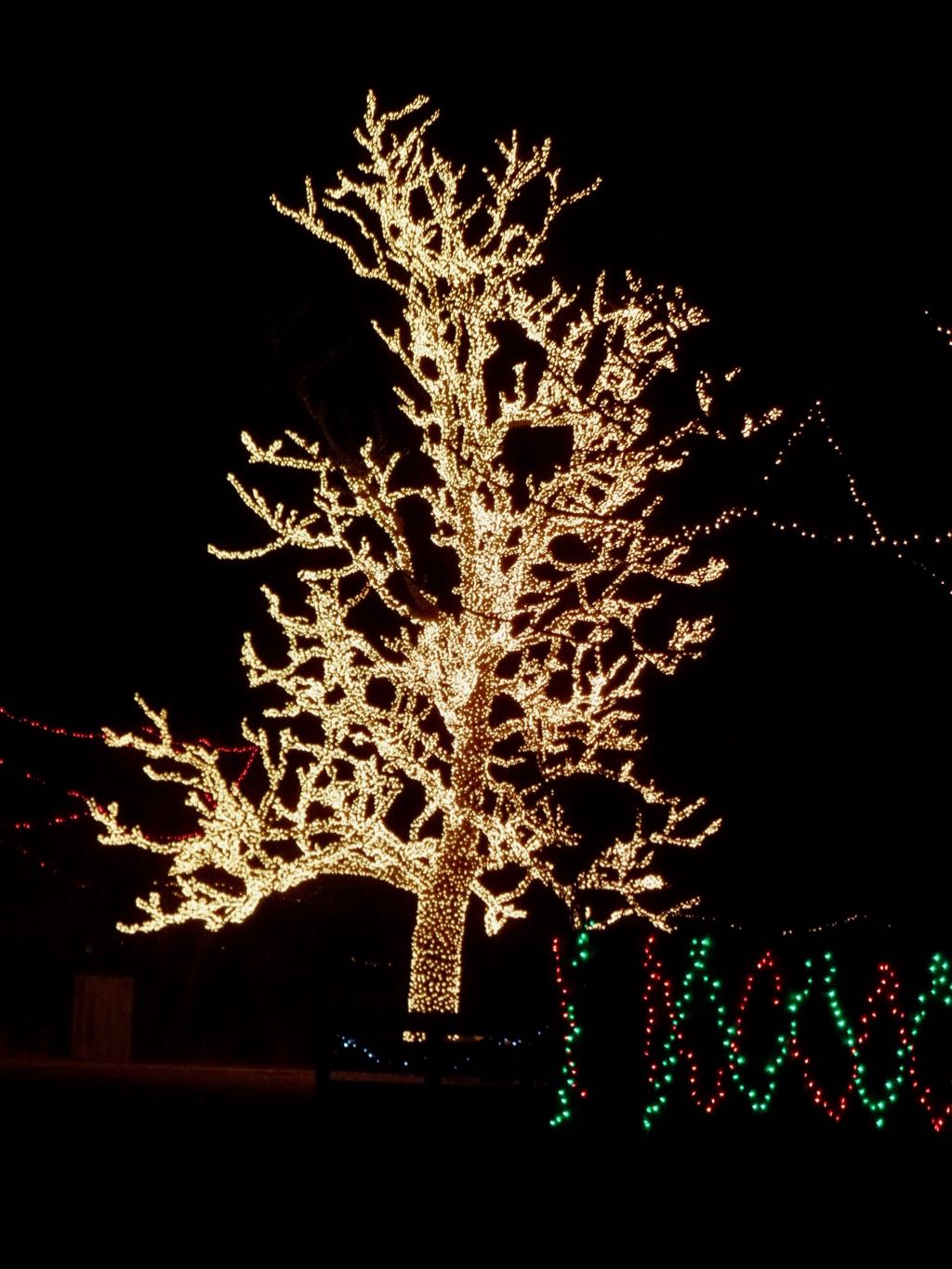 Here's their over-decorated tree, with lights they leave up all year because would you want to take that all down? 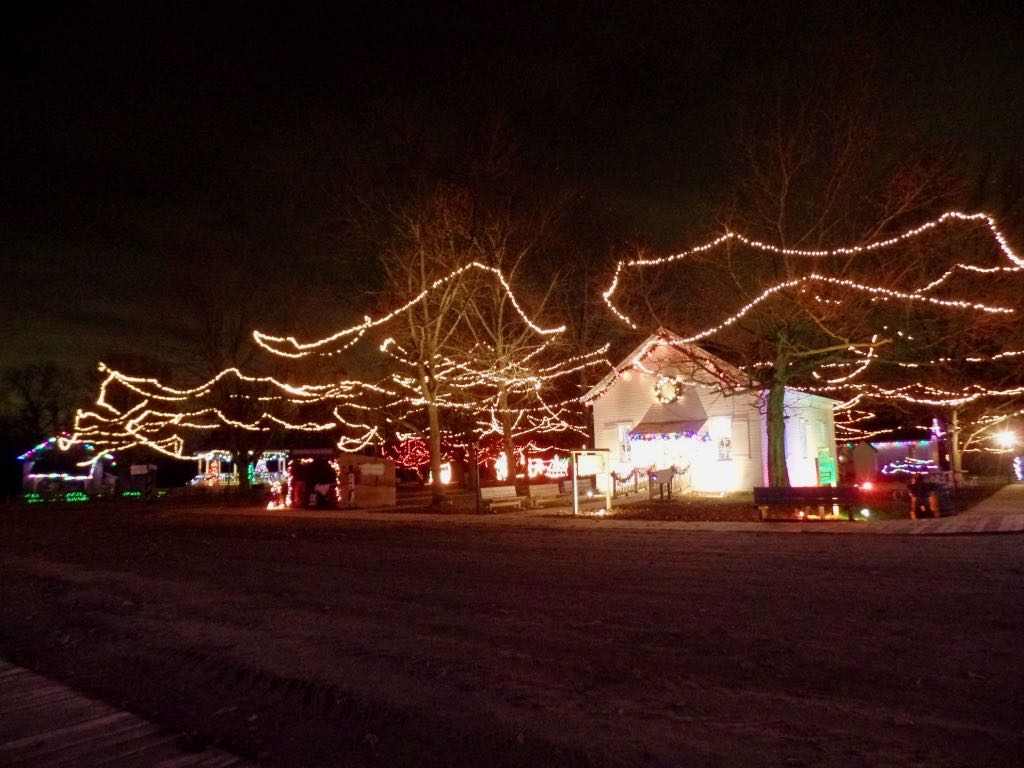 A look down main street at the village. 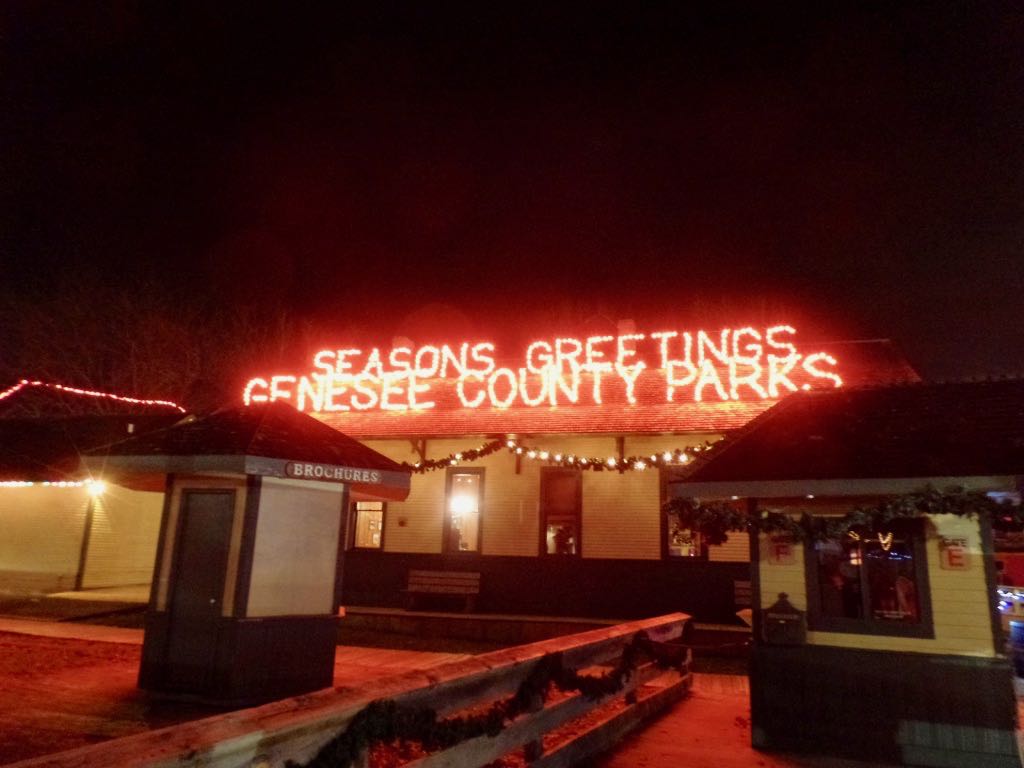 And the entrance, and exit, as we left.

Trivia: Michele Brekke was, in 1985 the first woman named as a flight director for NASA. In the long downtime after the Challenger disaster she went to another position; Linda Ham would in 1992 be the first woman actually serving as flight director. Source: Go, Flight! The Unsung Heroes of Mission Control, 1965 - 1992, Rick Houston, Milt Heflin.

Currently Reading: Love Conquers All, Robert Benchley. The back half of the book is Benchley's book reviews, from when he was reasonably seriously reviewing books for the New Yorker. There's some pieces that are just whimsy, like reviewing the train schedule or a manual on bricklaying. Or that are satirical, like outlining how to turn a Zane Grey novel (``[his] latest contribution to the literature of unrealism'') into a movie (``take every third sentence from the book and make a subtitle from it''). That said, I am so relieved every time I read his review of WEB Du Bois's Darkwater that Benchley is strongly on the side of justice for Black people, but also angry that it's denied so long, and that (to use a modern term) white people tone-police Du Bois. You can have very big catastrophic failure modes when someone is habituated to being funny looks at social movements.