My mathematics blog continues in its all-A-to-Z format. There's a new post, sure, and then recaps of old ones, like:

With that, let's return to the Potter Park Zoo's Wonderland of Lights which it turned out closed earlier than we figured. How did we cope with that disappointment? You'll see! 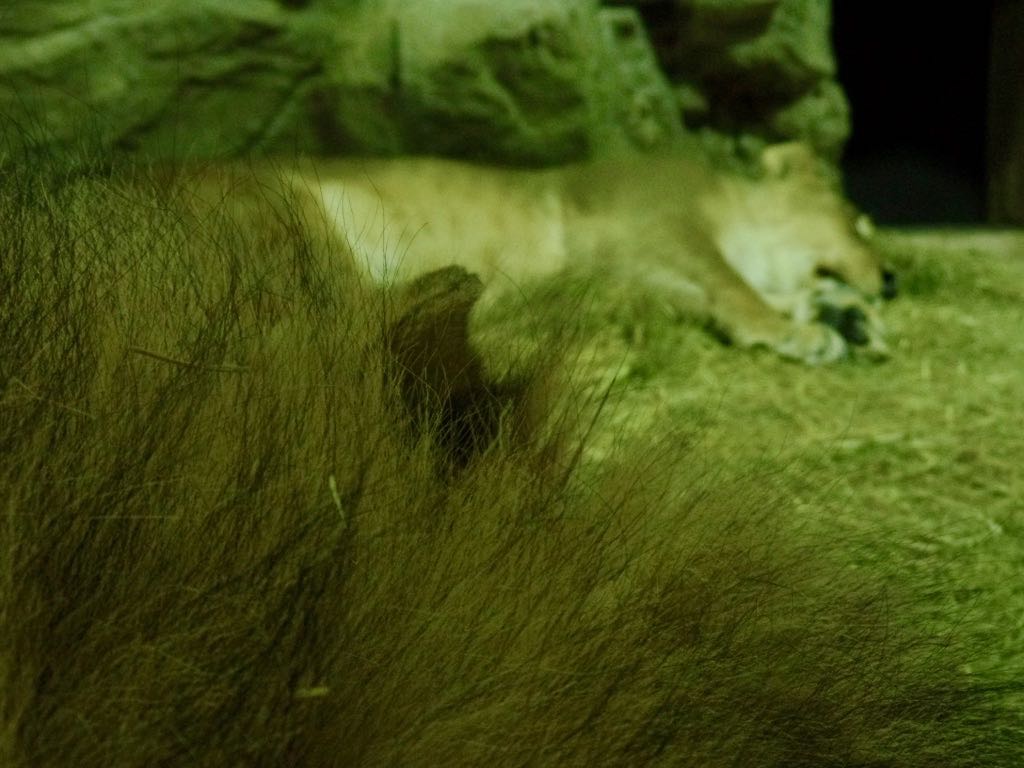 Lioness seen through a lion's mane. 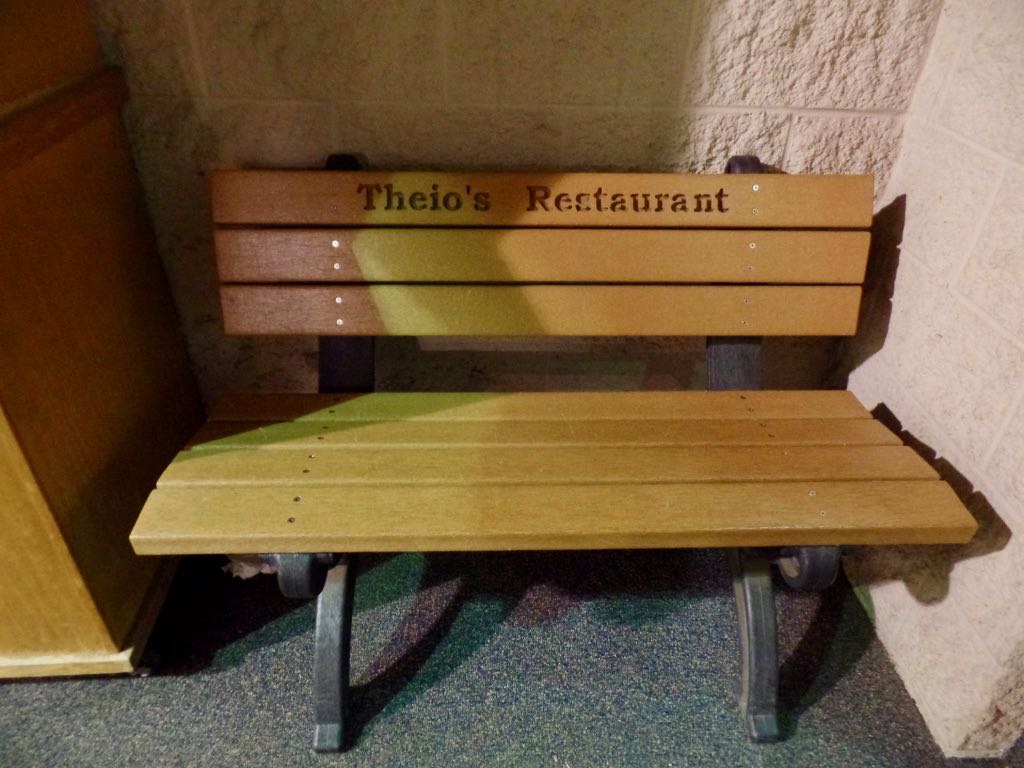 A bench in the Big Cat building sponsored by Theio's Restaurant, which had been demolished the spring of 2018. The bench was still there for Christmas 2019. 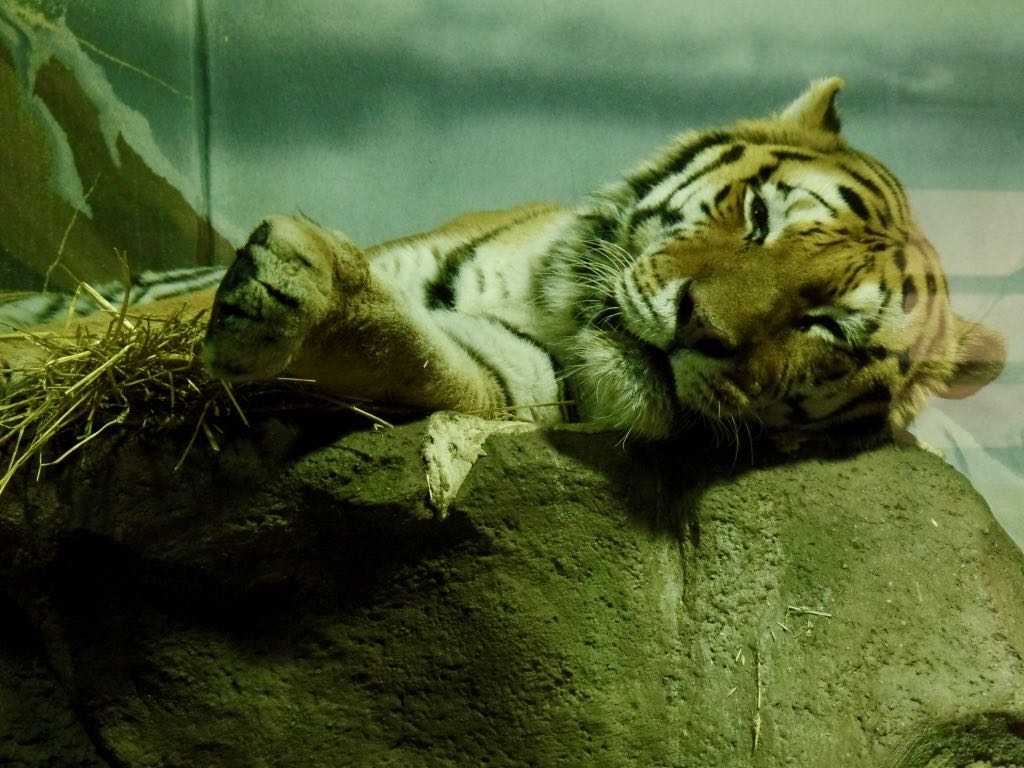 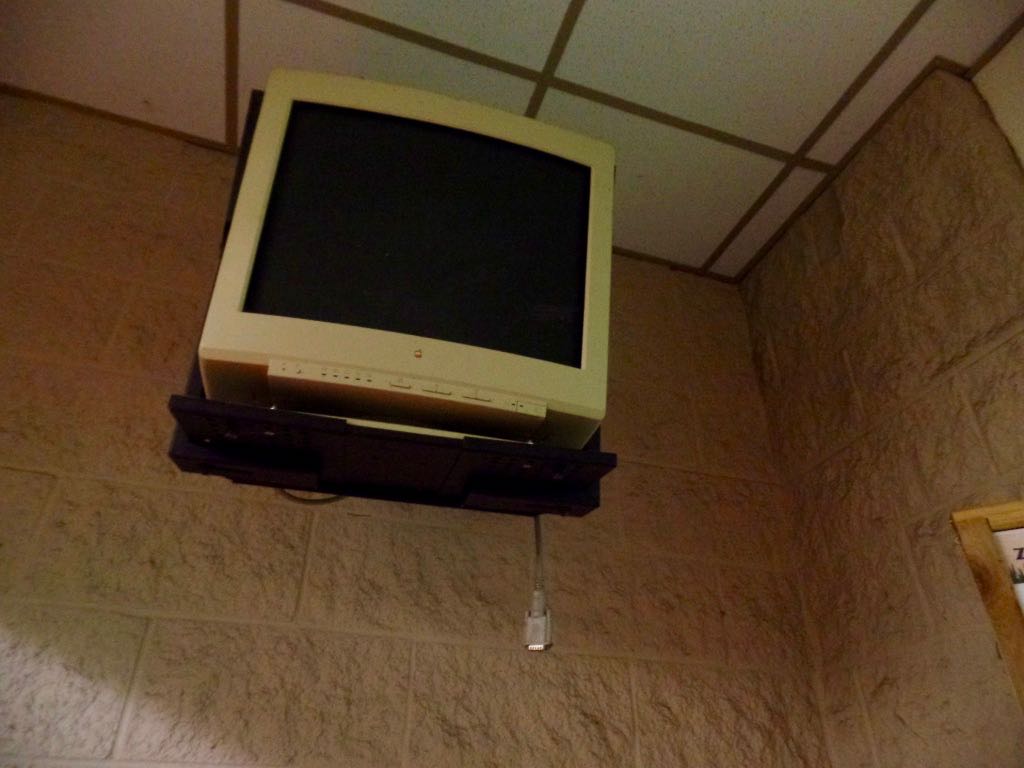 An ancient Apple-brand CRT monitor! It likely provided information about the cats and the park when it was in service. By 2019 this was removed and no new monitor was in its place above the Theio's bench. 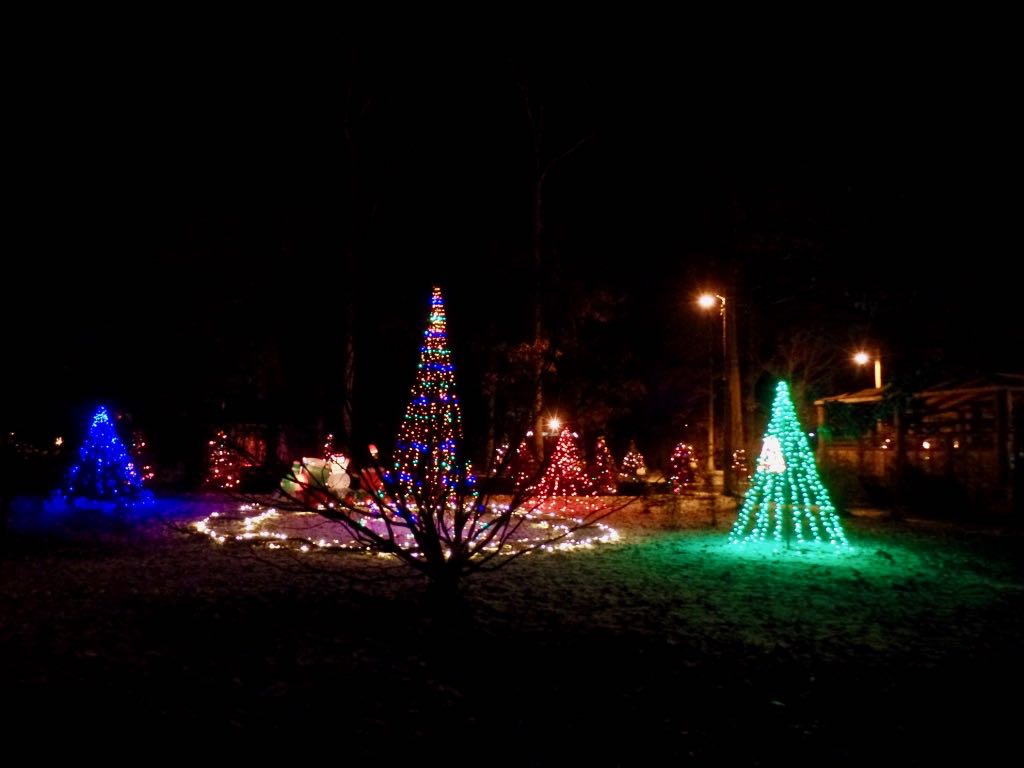 Outside again: trees set up in a broad field between some of the animal houses and the snack stand. 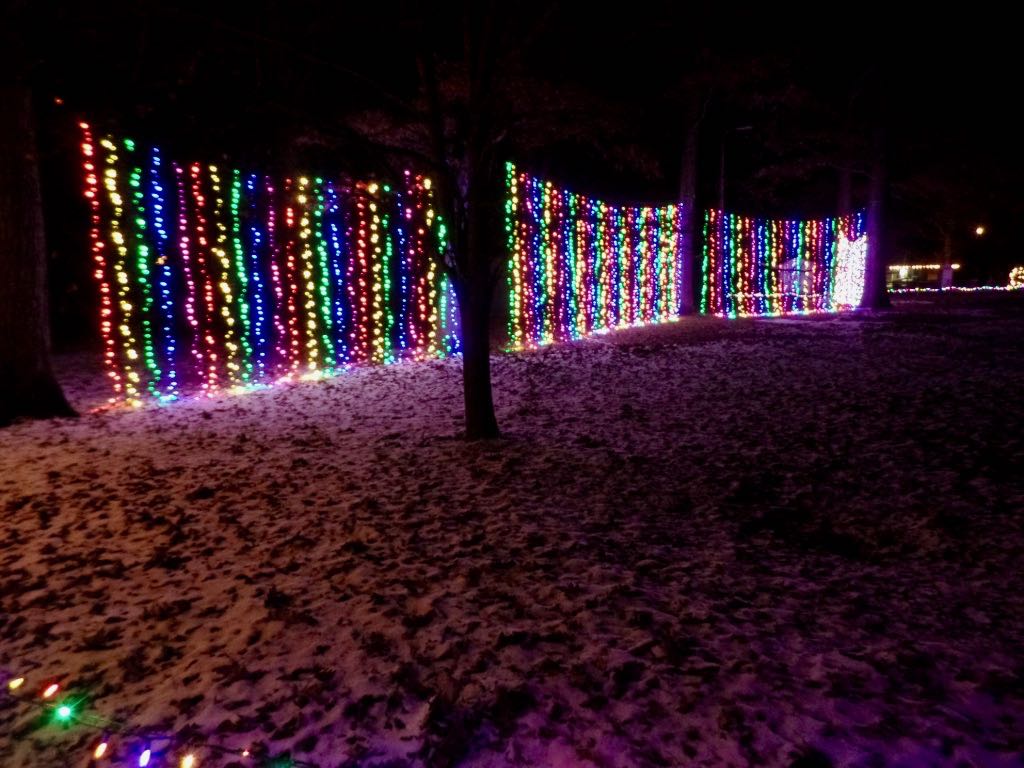 Wall of colored lights and the footprints of so many people come up to see the lights. 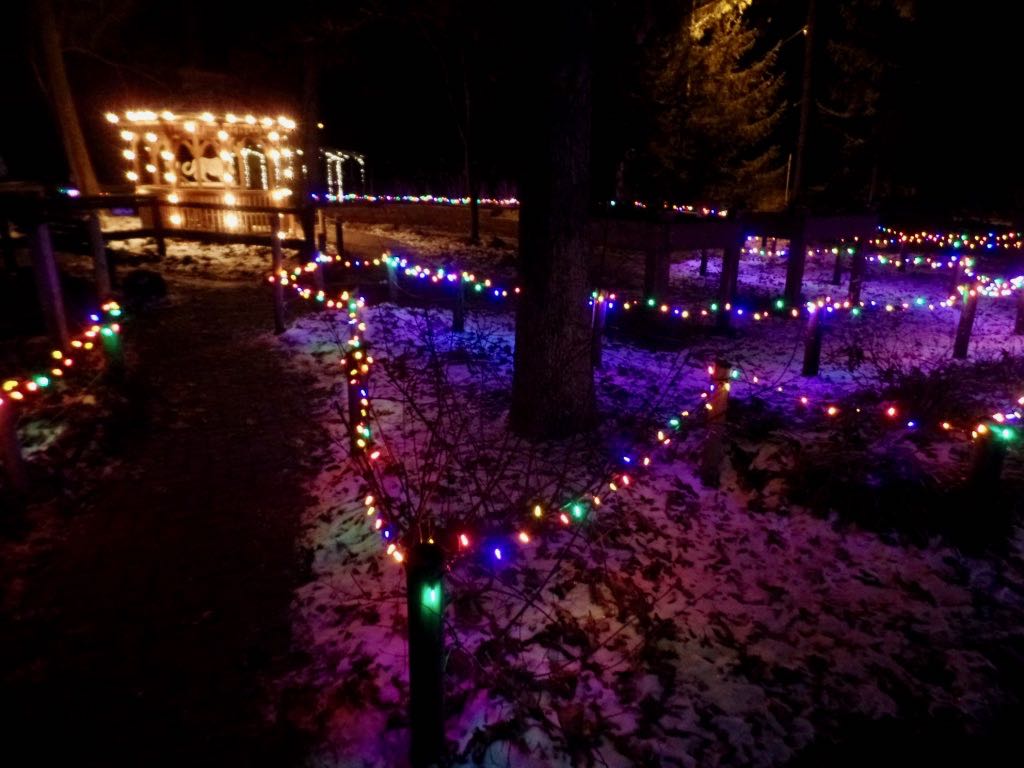 Complicated pathways around a gazebo which, I think, is near the butterfly enclosure. (The butterflies were away for the winter; I don't know where.) 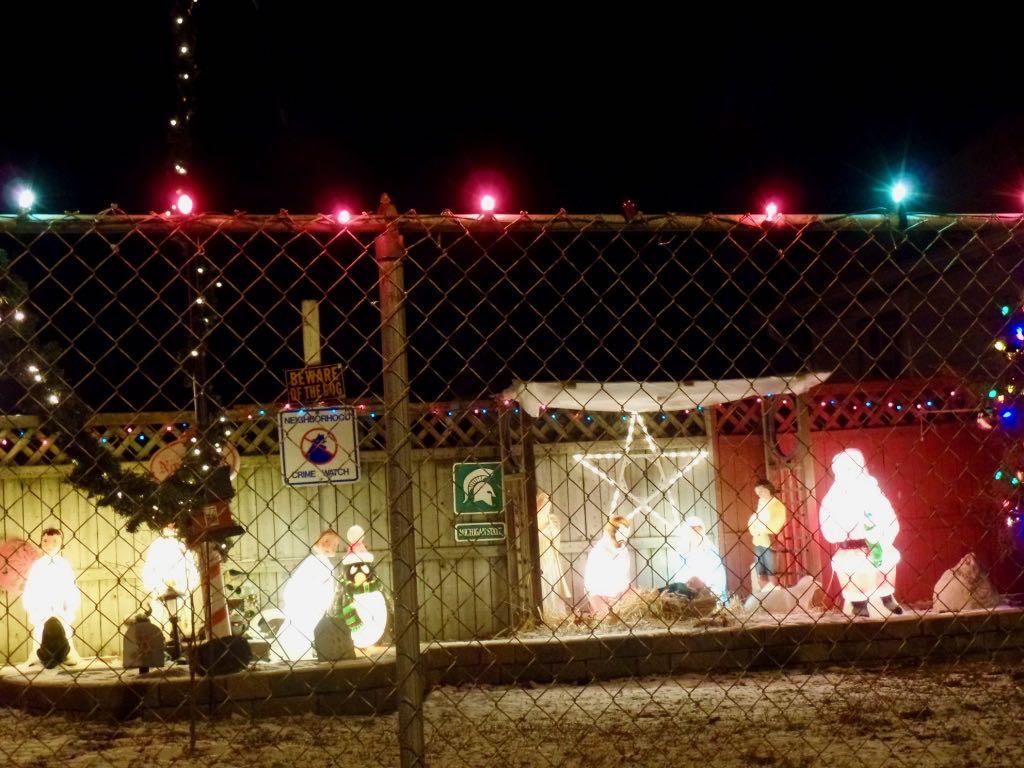 So we forgot, once again, that the zoo closed at 8 pm, not 9 pm. In consequence we went driving around town to see decorated houses and this one did not disappoint, with a big sprawling manger and Santa Claus and sign warning they're part of the neighborhood crime watch. 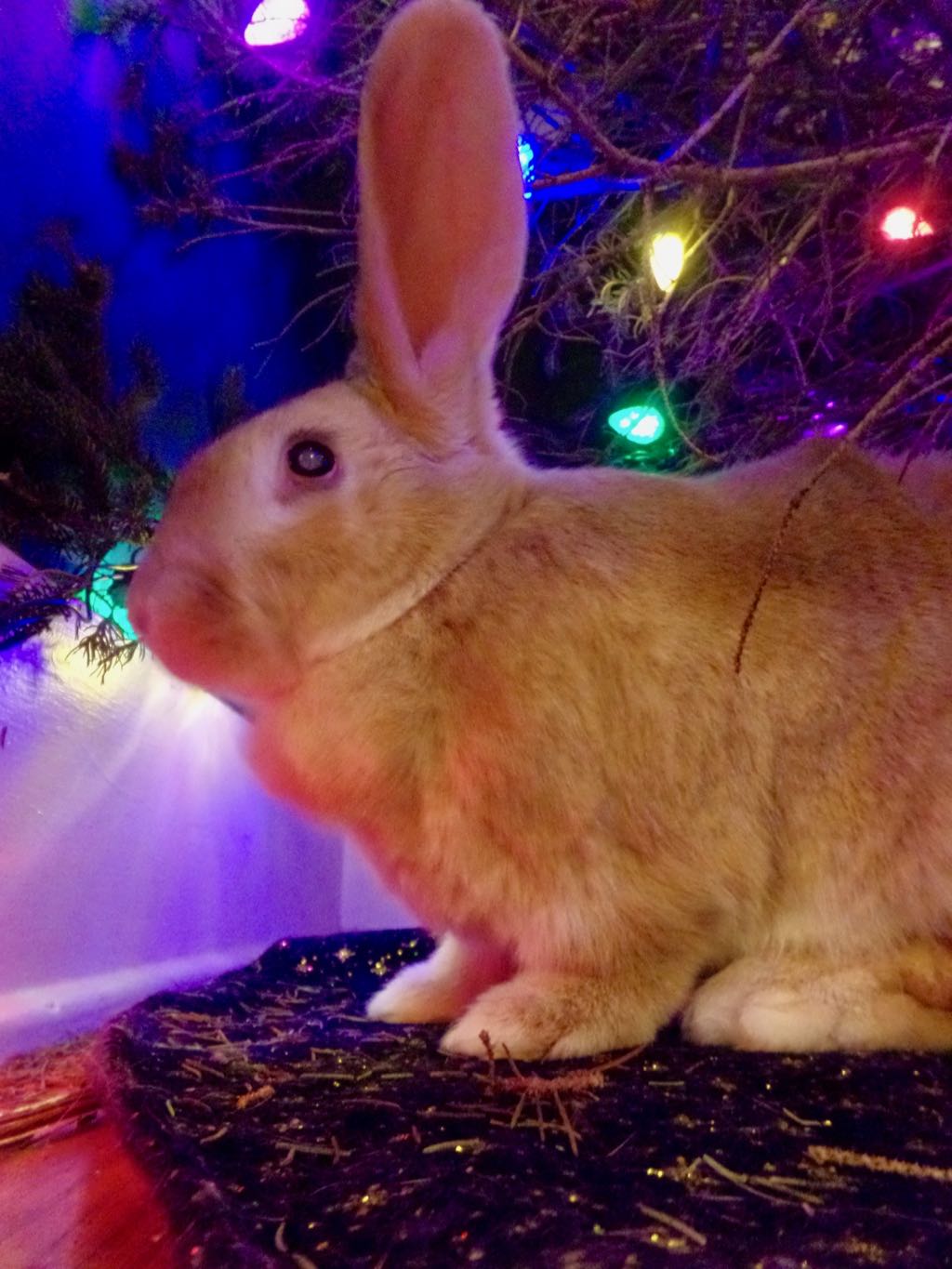 And back home. When Sunshine has some free run time she loves going underneath the Christmas tree. Here, she considers whether she can eat the lights. (She could not.) 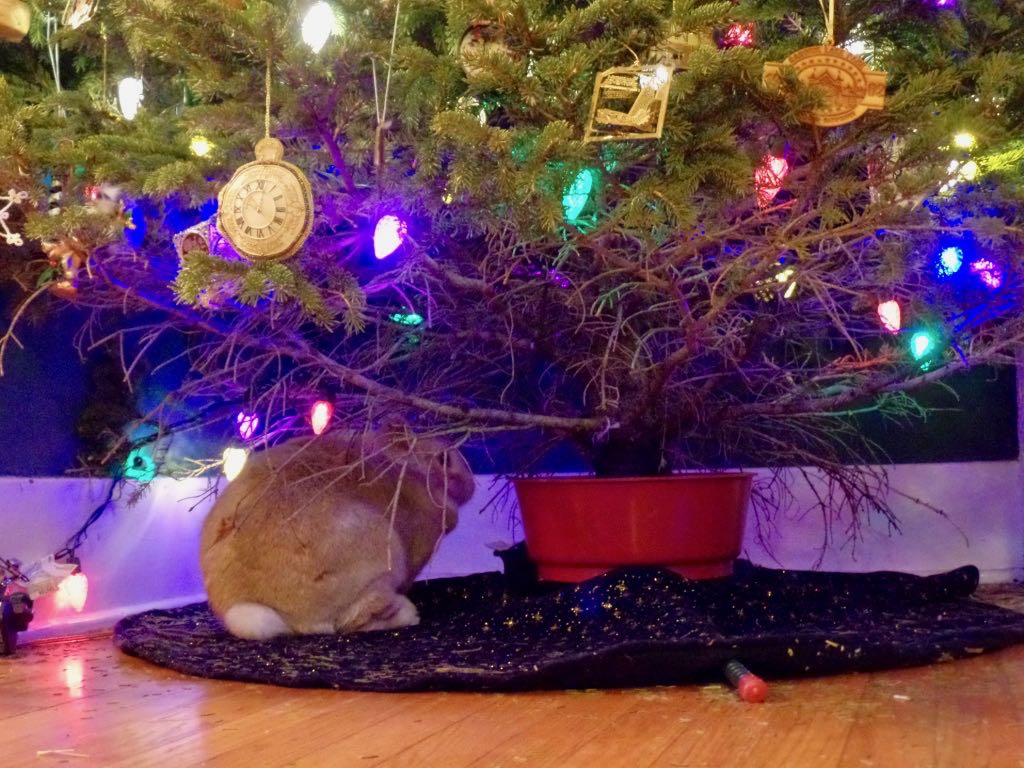 I did not catch a picture of her lapping up tree water, but she'd done it some. 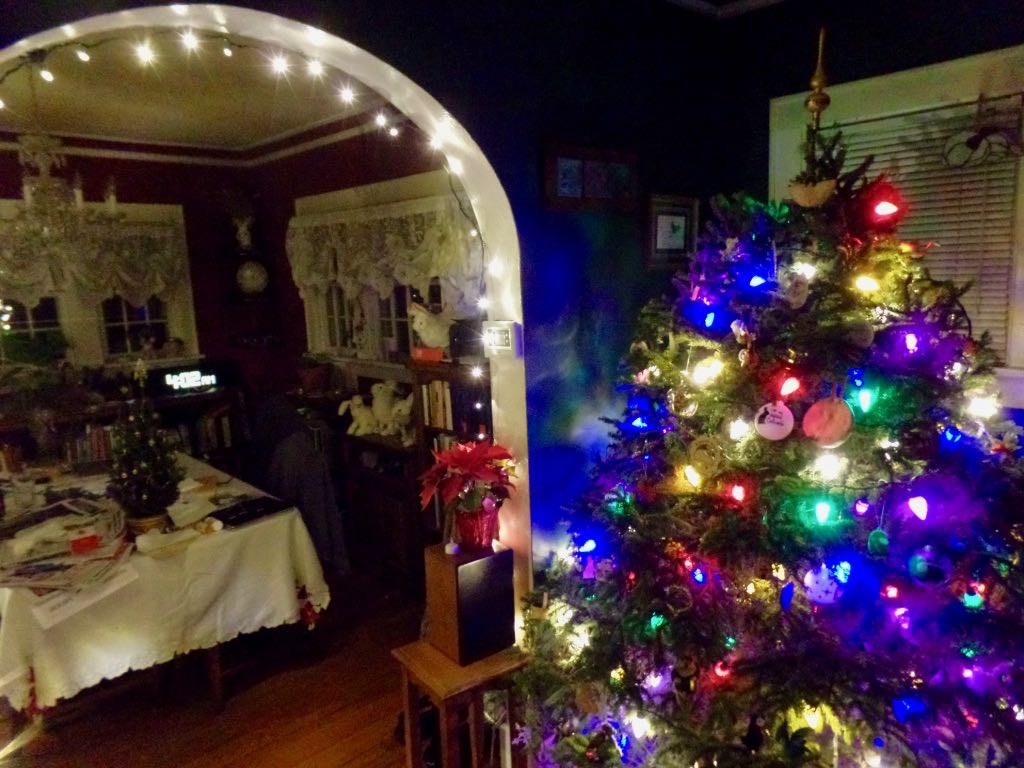 And a picture of our tree, and arch decorations, by night. Yes, that's 4:02 am by the Run DMD pinball clock there. We went to bed early. 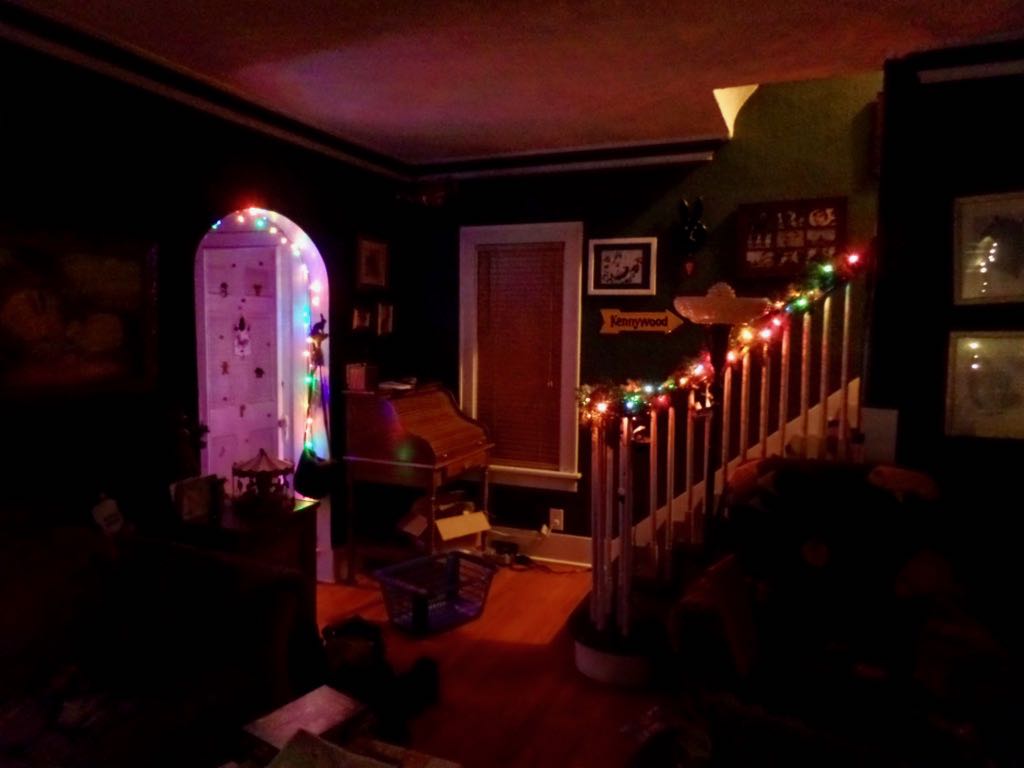 Our lit arch and the stairwell, going up to bed. Note the Kennywood arrow which does not point directly to Kennywood, but does tell you which turn to make, at the end of the block, on your journey to the park. 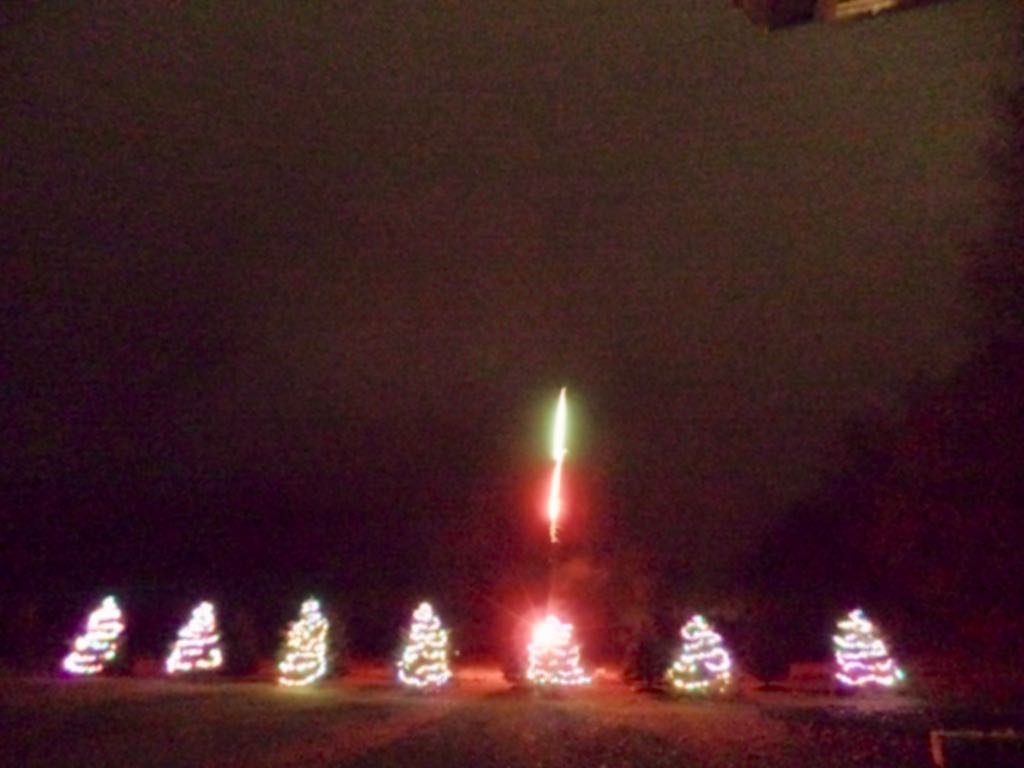 New Year's Eve! We spent that at MJS's pole barn for a tournament and party, and as will happen, they set off fireworks that just look like they're being launched by a tree. 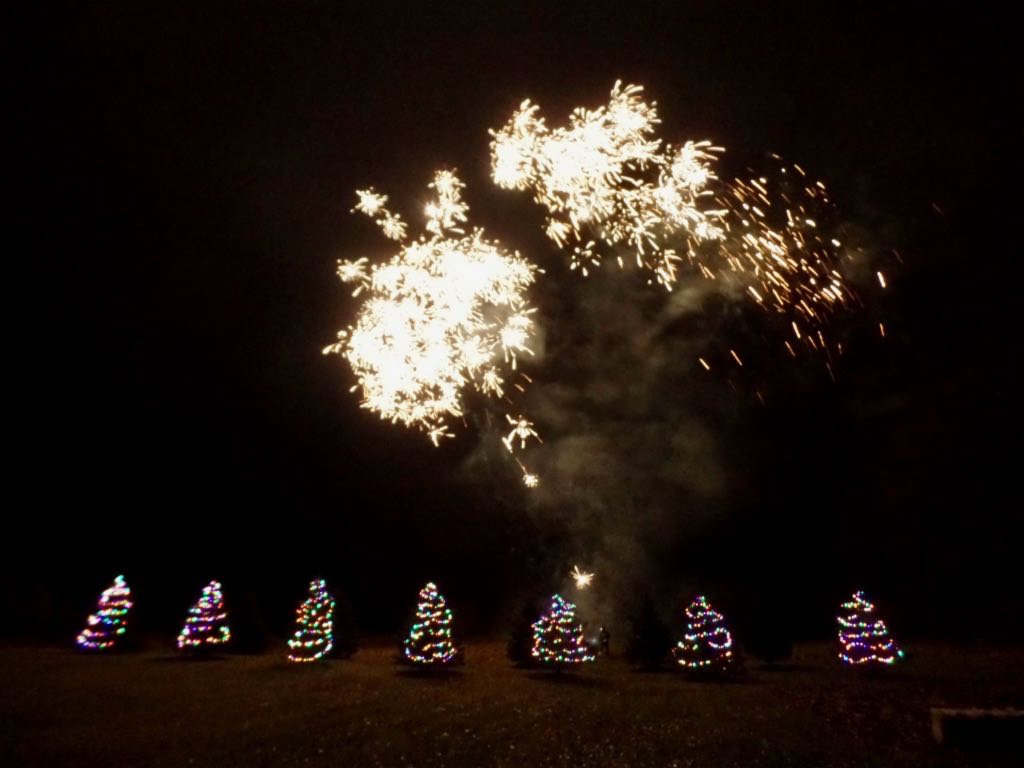 I'm still amazed that you can just go and buy fireworks like these, though. 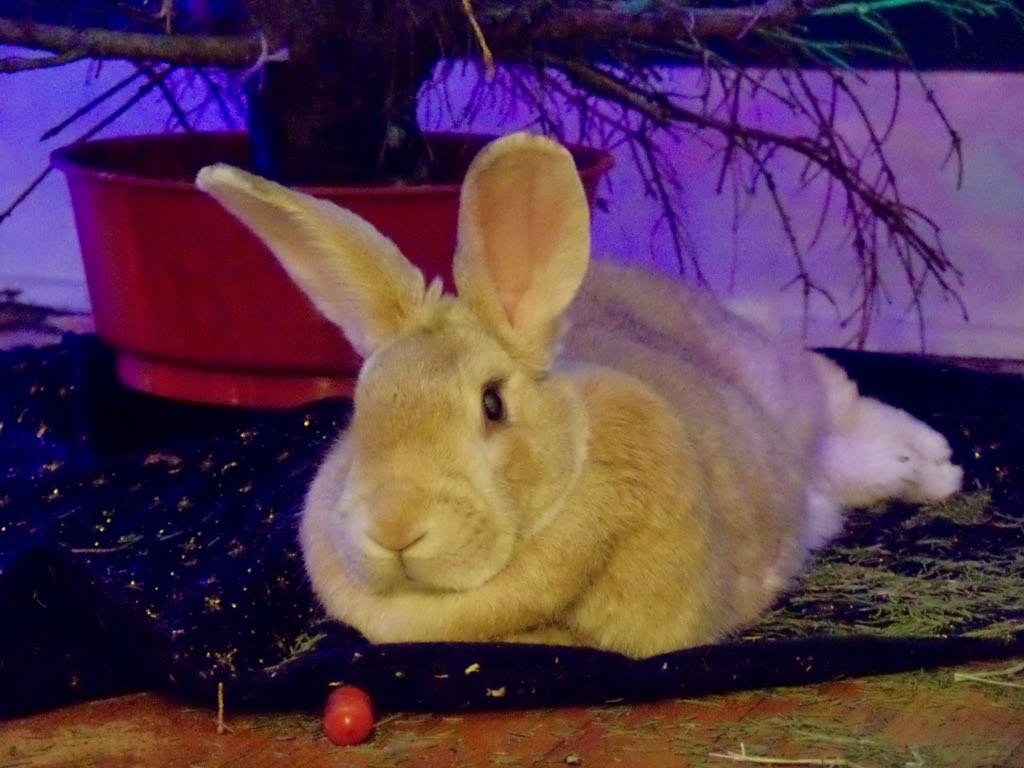 Back home. Poor Sunshine sprawls out under the tree, having forgotten where her front legs are. 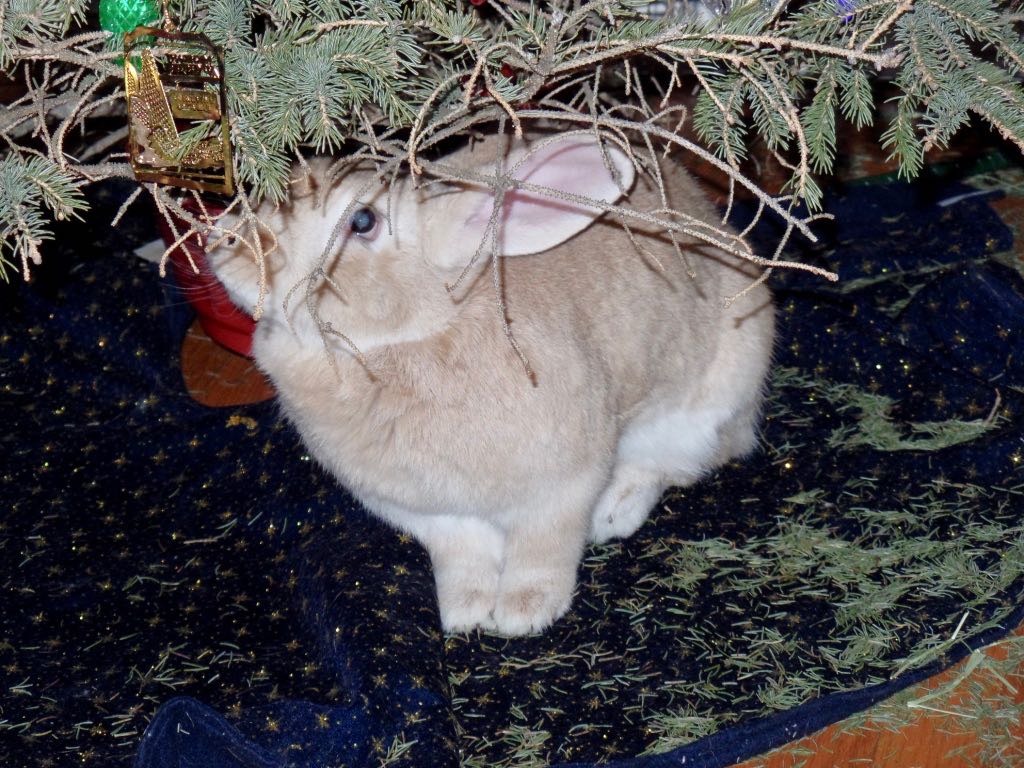 Oh! She found her legs and now she's eating the tree. All's well.

Trivia: In 2003, the Gap had 4,250 stores in the United States, grossing more than $13.6 billion, the leading apparel chain in the country. Source: Big Cotton: How a Humble Fiber Created Fortunes, Wrecked Civilizations, and Put America on the Map, Stephen Yafa.

“Years ago, Hinnissy, manny years ago, they was a race between th' dimmycrats an' th' raypublicans f'r to see which shud have a choice iv principles. Th' dimmycrats lost. I dinnaw why. Mebbe they stopped to take a dhrink. Annyhow, they lost. Th' raypublicans come up an' they choose th' 'we commind' principles, an' they was nawthin' left f'r the dimmycrats but th' 'we denounce an' deplores.' I dinnaw how it come about, but th' dimmycrats didn't like th' way th' thing shtud, an' so they fixed it up between thim that whichiver won at th' iliction shud commind an' congratulate, an' thim that lost shud denounce an' deplore. An' so it's been, on'y the dimmycrats has had so little chanct f'r to do annything but denounce an' deplore that they've almost lost th' use iv th' other wurruds.”

This is from 1899-1900 and it's not like he's wrong, even today.
Tags: mathematics, potter park zoo
Subscribe