She makes sure I see her teasing, hear her say, ``Who is Johnny''

bunny_hugger. Thank you so for giving me this day.

Meanwhile over on my mathematics blog? Using my A to Z Archives: Benford's Law gets a bit of attention today and I share a story of my achieving the first possible level of decency.

So now we get to early 2019 --- I'm less than a year and a half back! --- and the first important event, the State Championship Series pinball tournament, in Fremont. 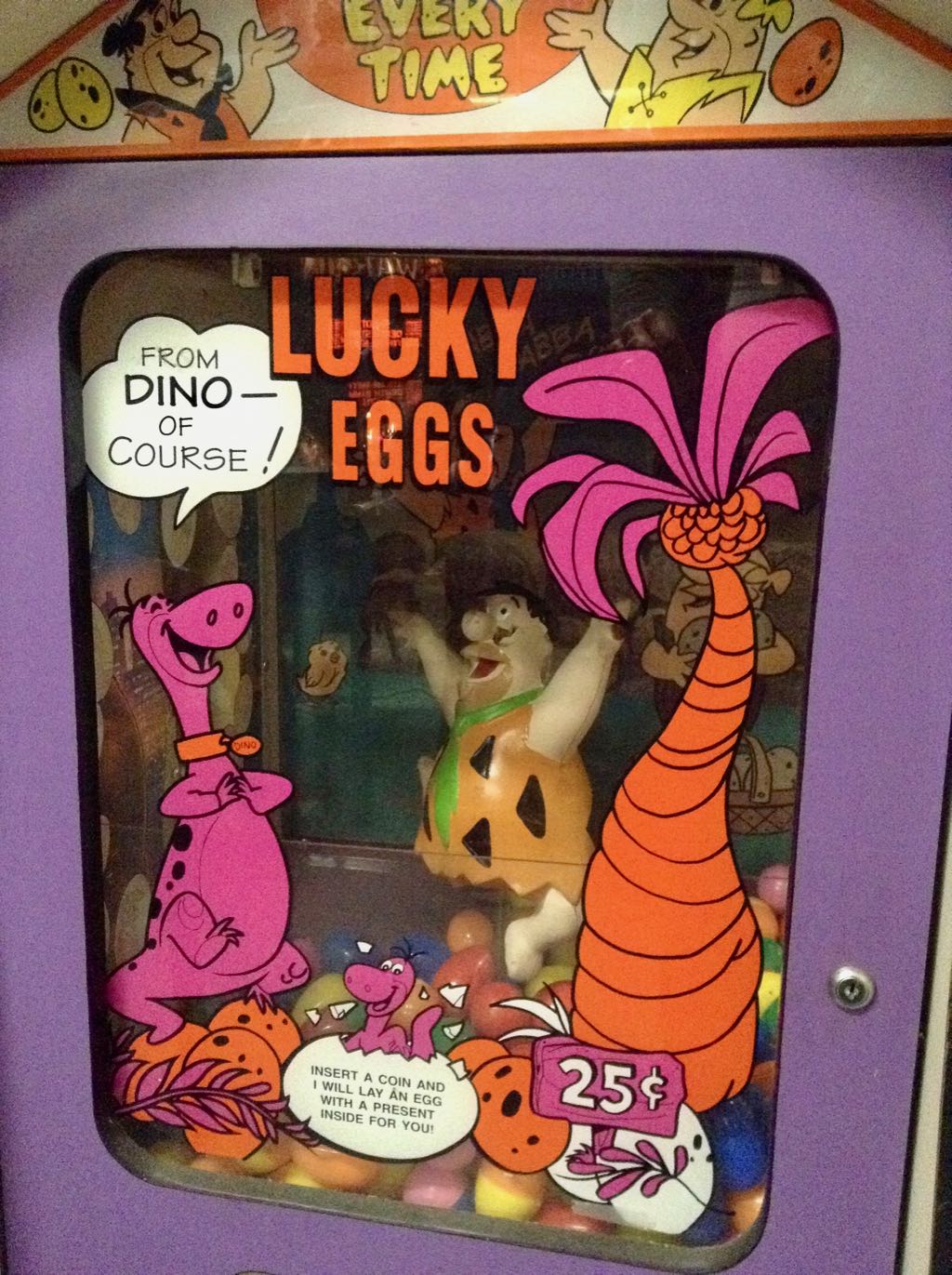 Oh, yeah, a Lucky Eggs dispenser, never turned on, that they had at the venue. (I've seen another, on the opposite end of the state, at the Chesterfield bowling alley where that league meets.) So ... I guess we're supposed to take that Dino is a female Snorkasaurus? 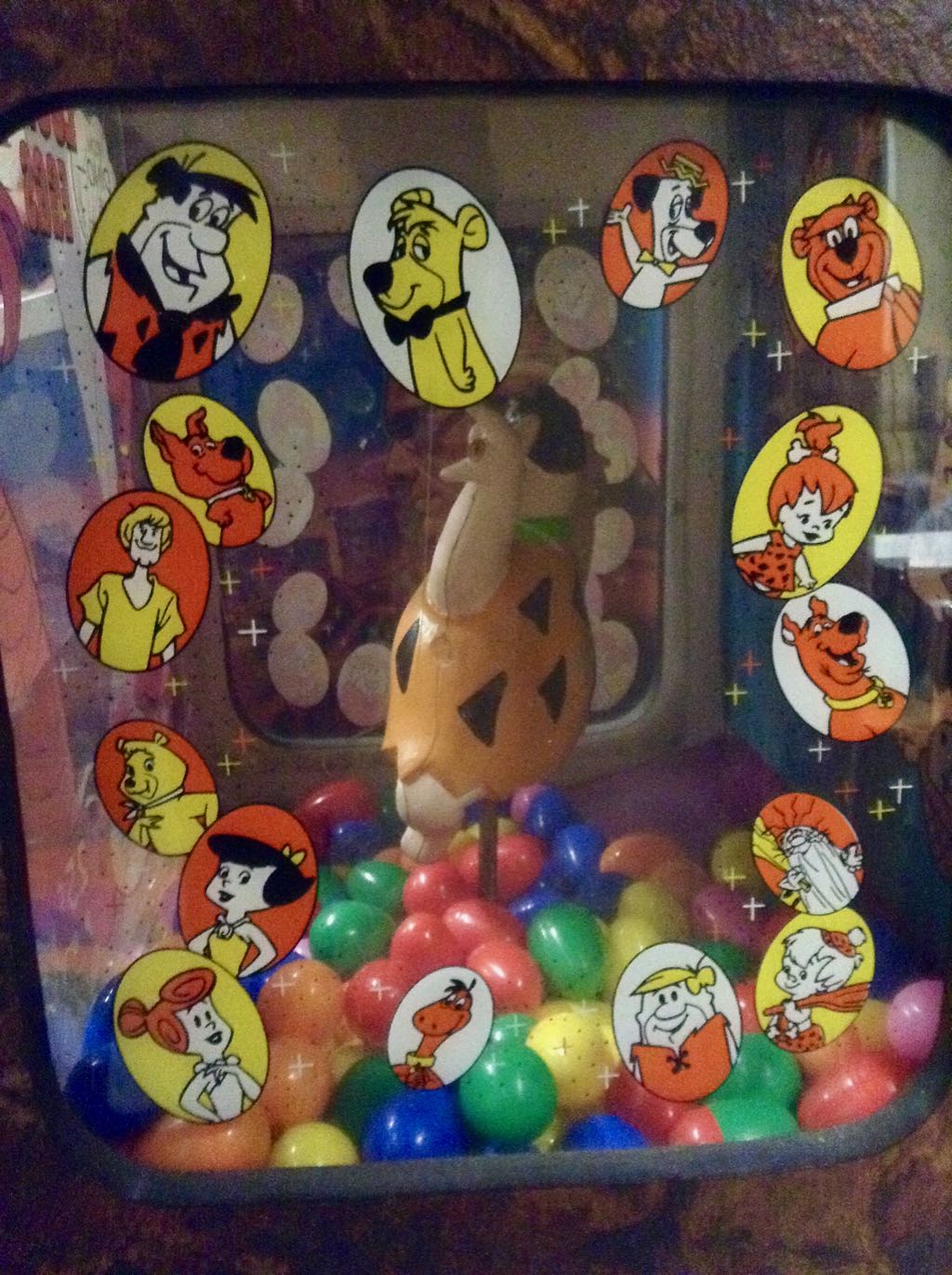 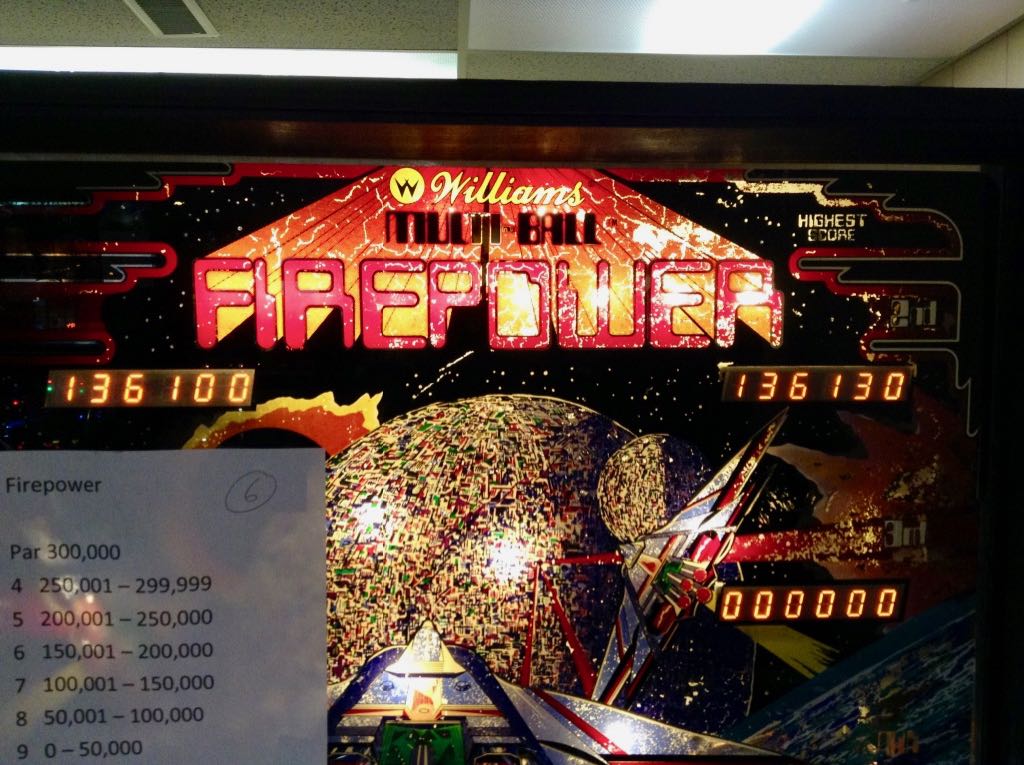 Bit of a tight score there! Although this is from the pin-golf tournament held the night before, so that both players were scored the same (taking seven strokes on the objective here). Still, thirty points out of 136,000 is abnormally close. 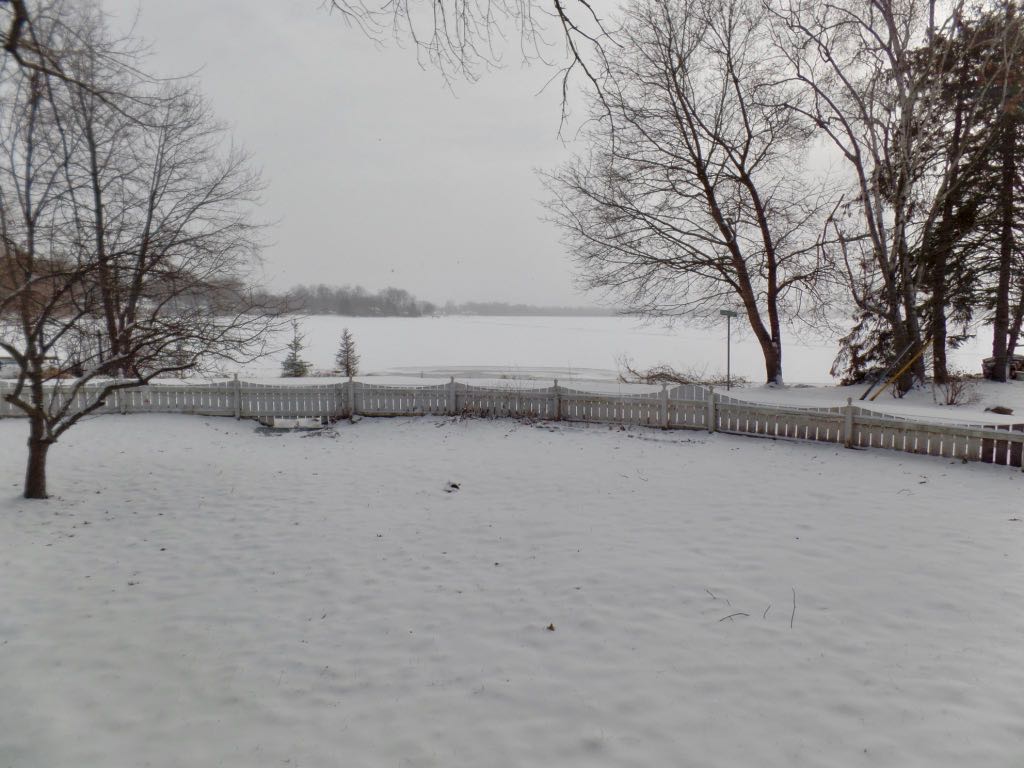 The view outside the AirBnB that we rented. It's just on the lake, and also there's a lake there. Our pipes froze up the next morning. 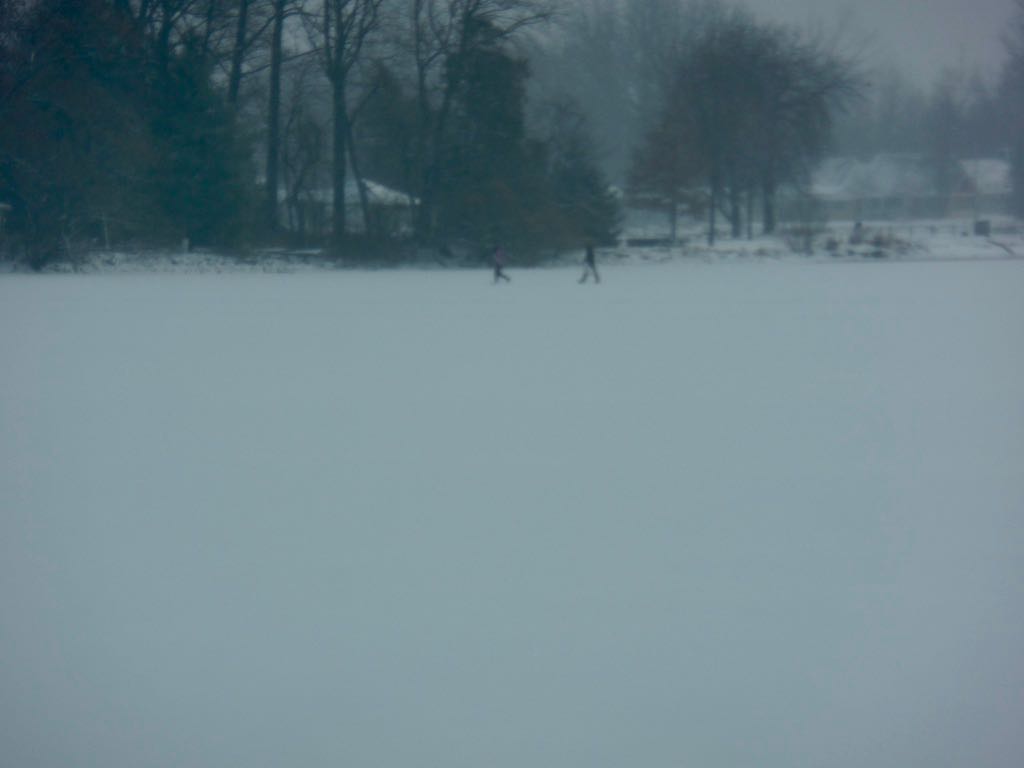 People scurrying along the pond in the morning. It was pretty close to zero Fahrenheit. 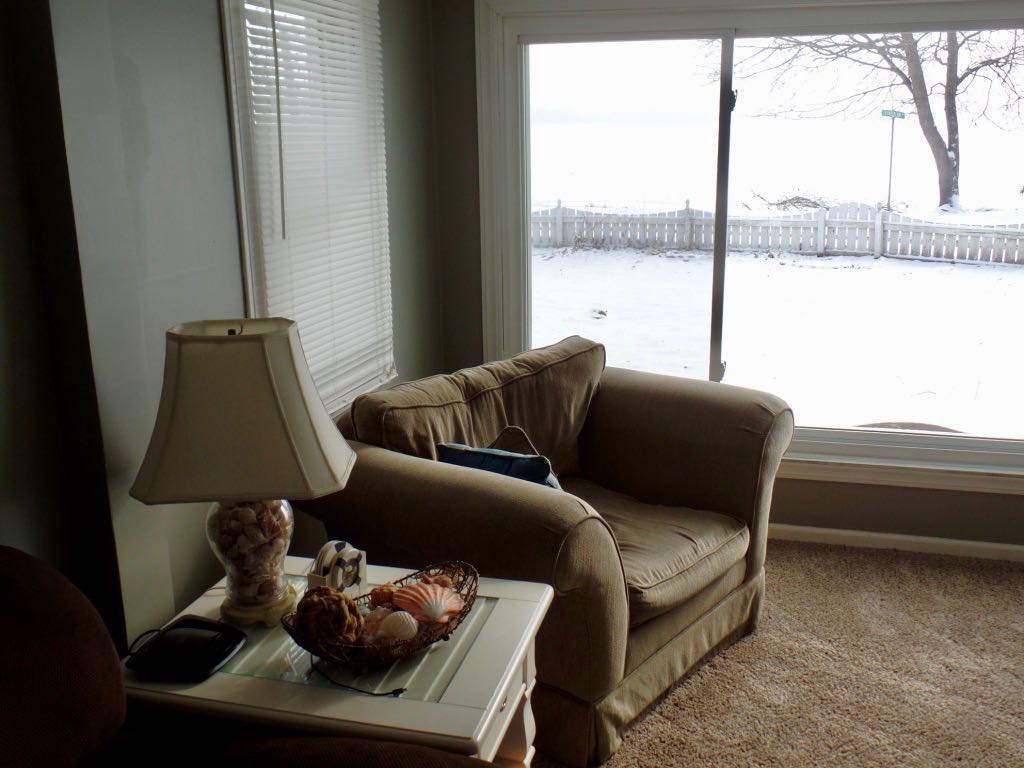 Partial view of the living room and couches and you can see where this is a great space in the hot summer and a really cheap rental when it's zero degrees Fahrenheit out. 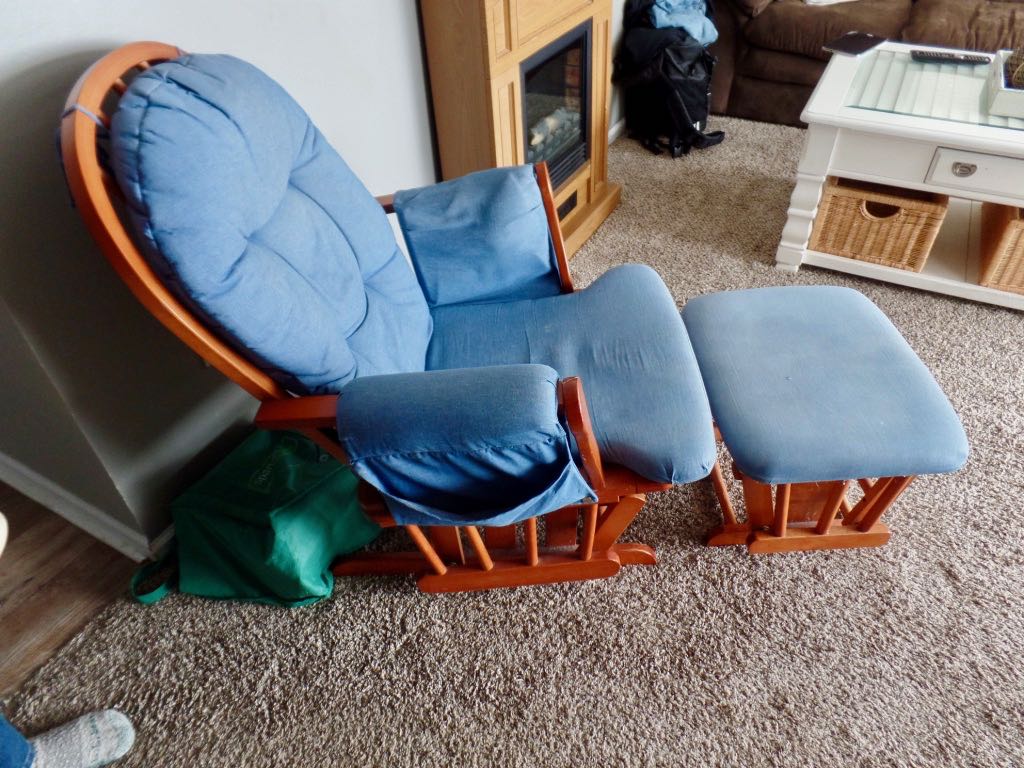 Reclining chair that's quite comfortable if you haul it out from the wall so you can recline. 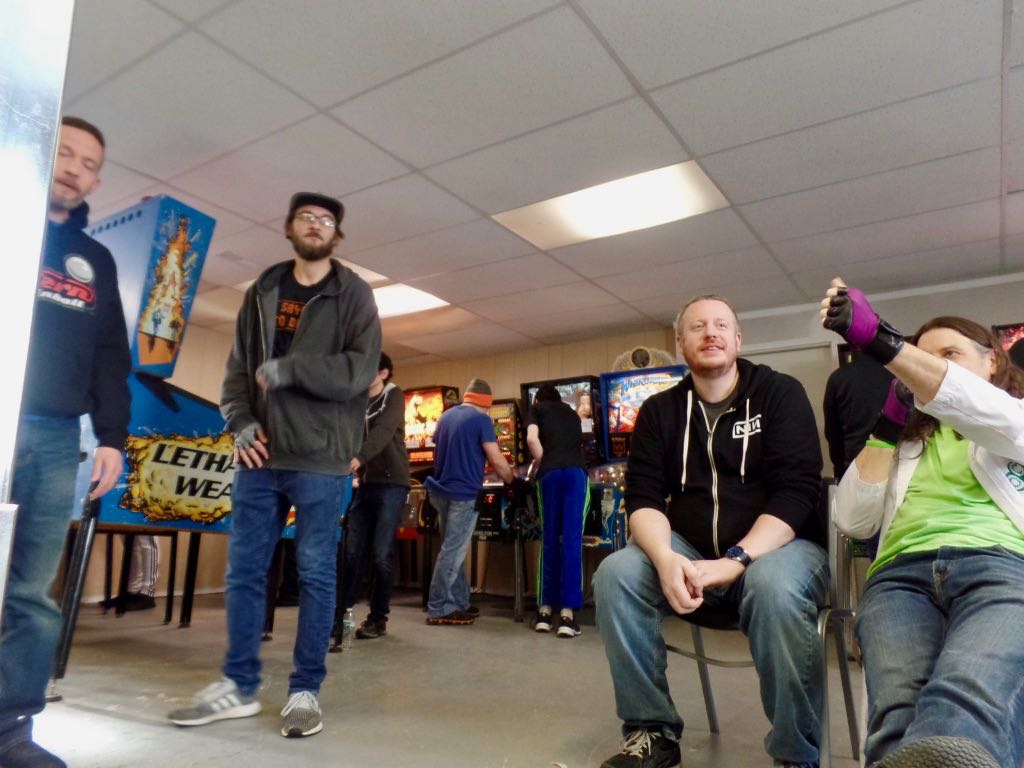 Players wrapping up their warmup games, or gathering for instructions, ahead of the start of the tournament. 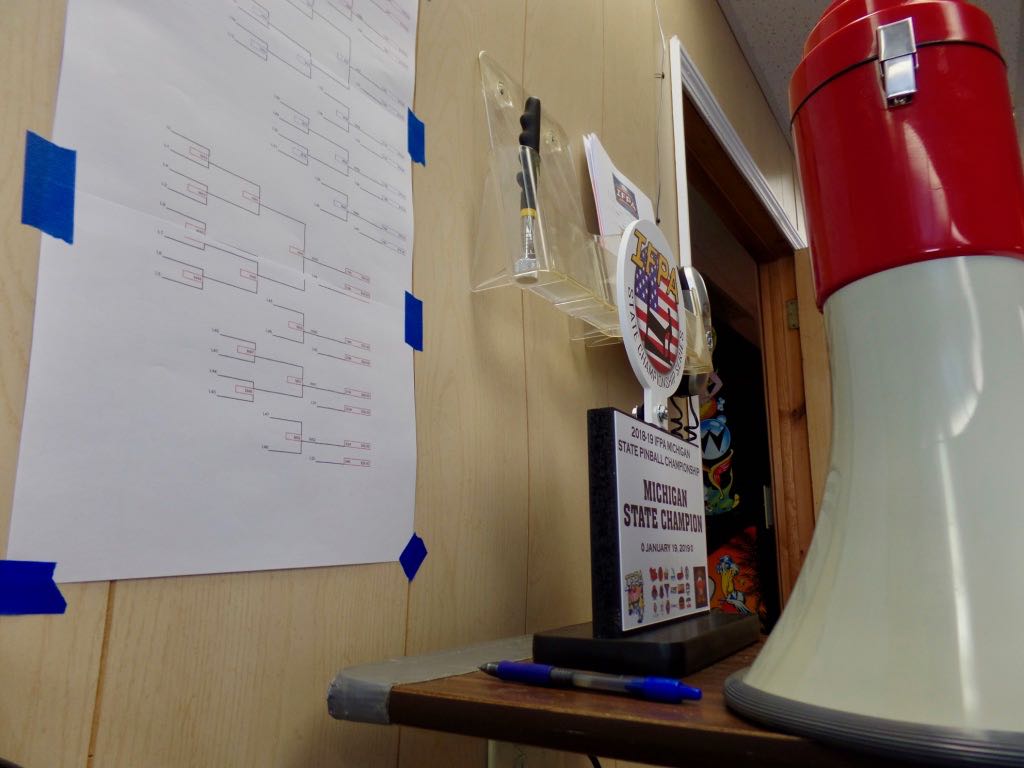 Everything you need for a pinball tournament: the complete bracket chart for all the competitions, the International Flipper Pinball Association-provided trophy, and a bullhorn for the tournament director to feel too shy to use. Also pens. 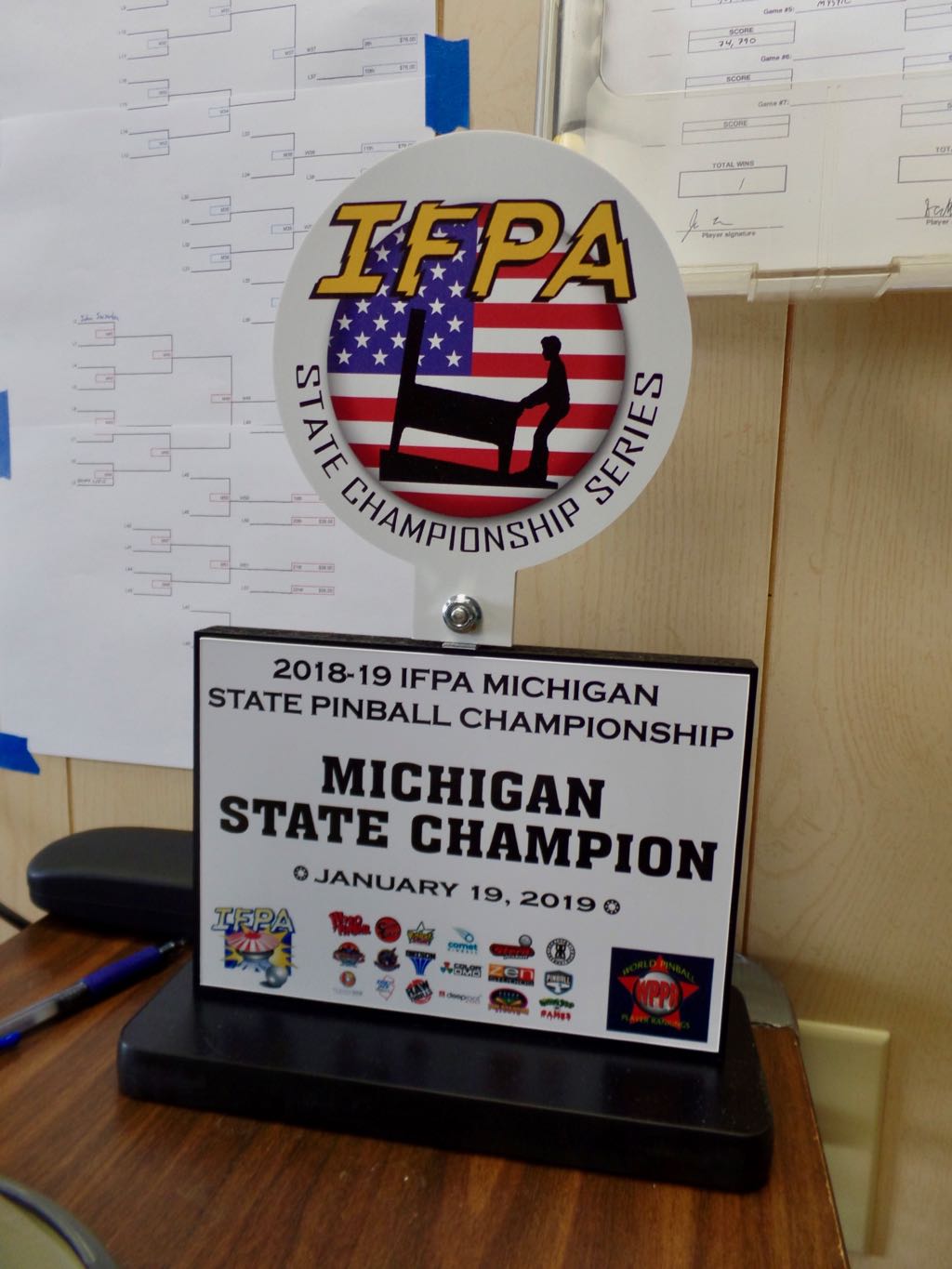 The thing only one of us could take home: the championship for the state of Michigan, on Ojanuary 19, 20190. 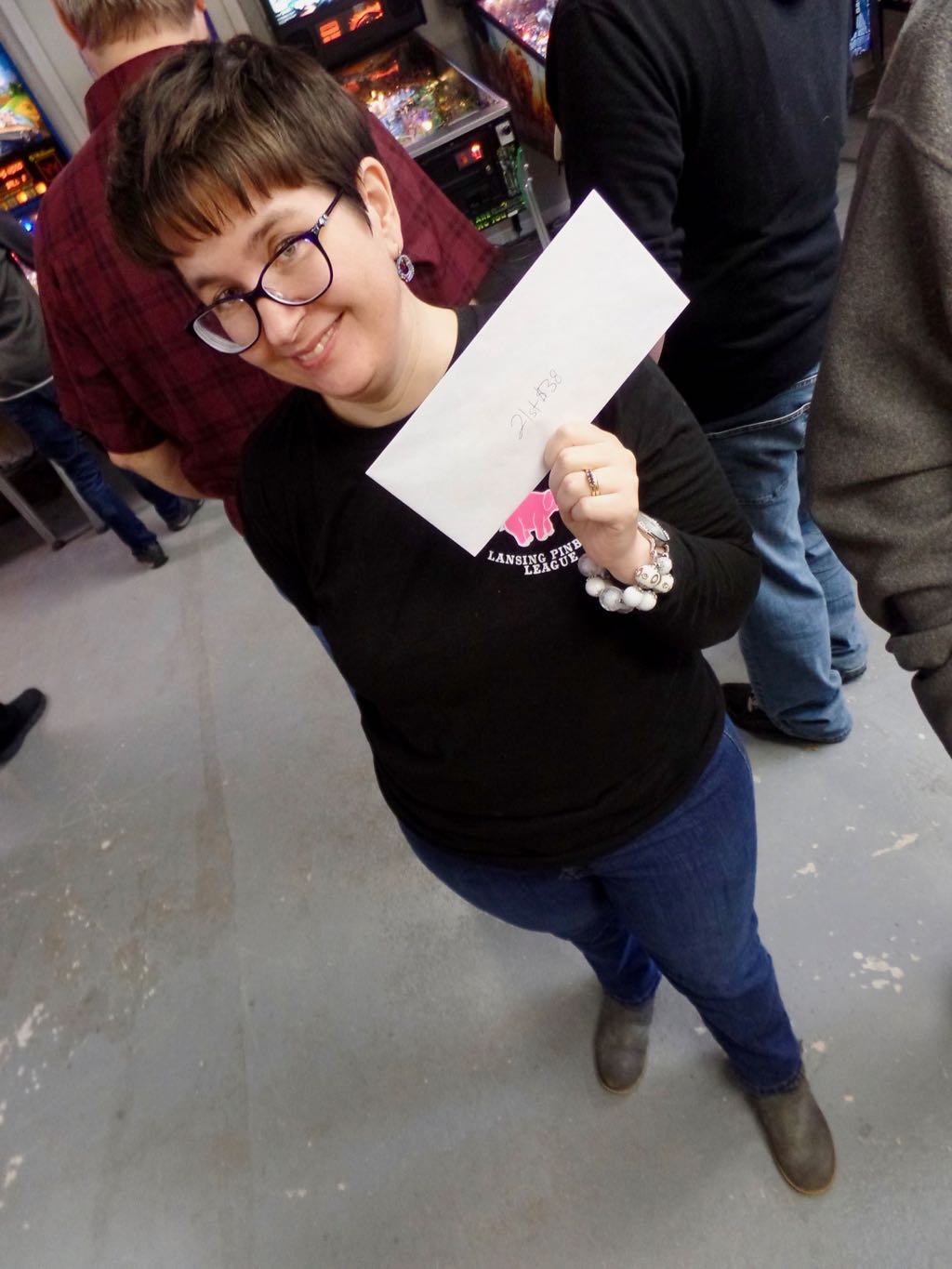 bunny_hugger showing off her winnings! They were thirty-eight dollars. 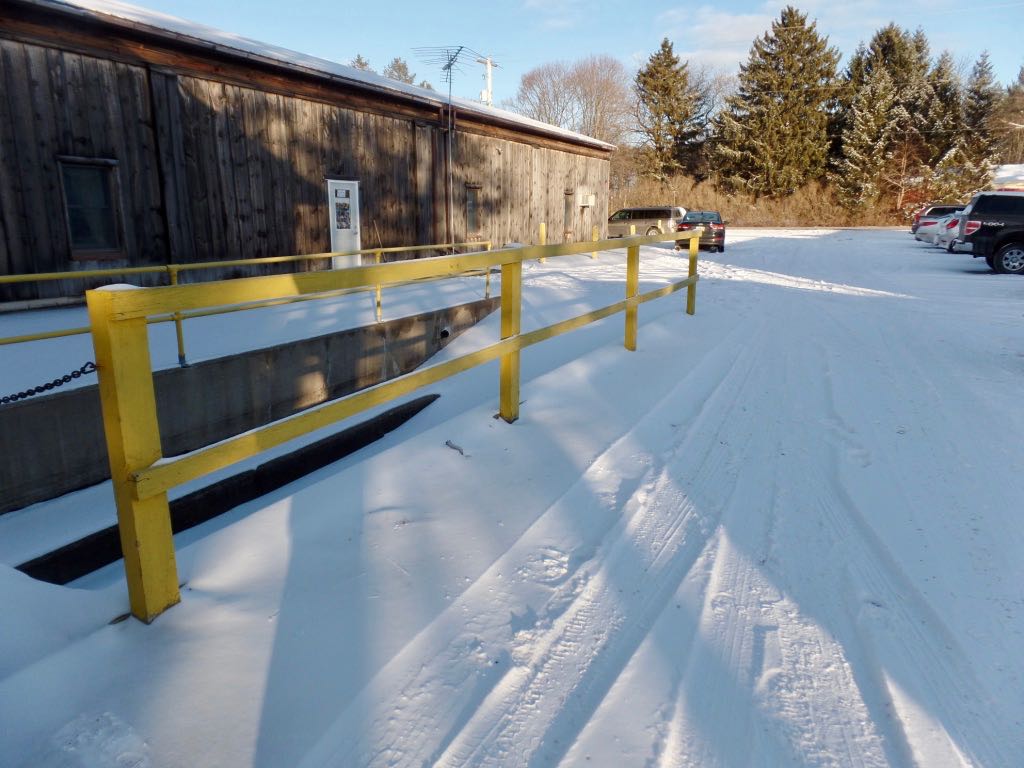 A look outside the facility. We were worried there'd be terrible weather getting to Fremont --- this is why we'd rented a place to stay the night before and after --- but as you can see, it wasn't all that much snow. Mostly it was a lot of bitter cold. 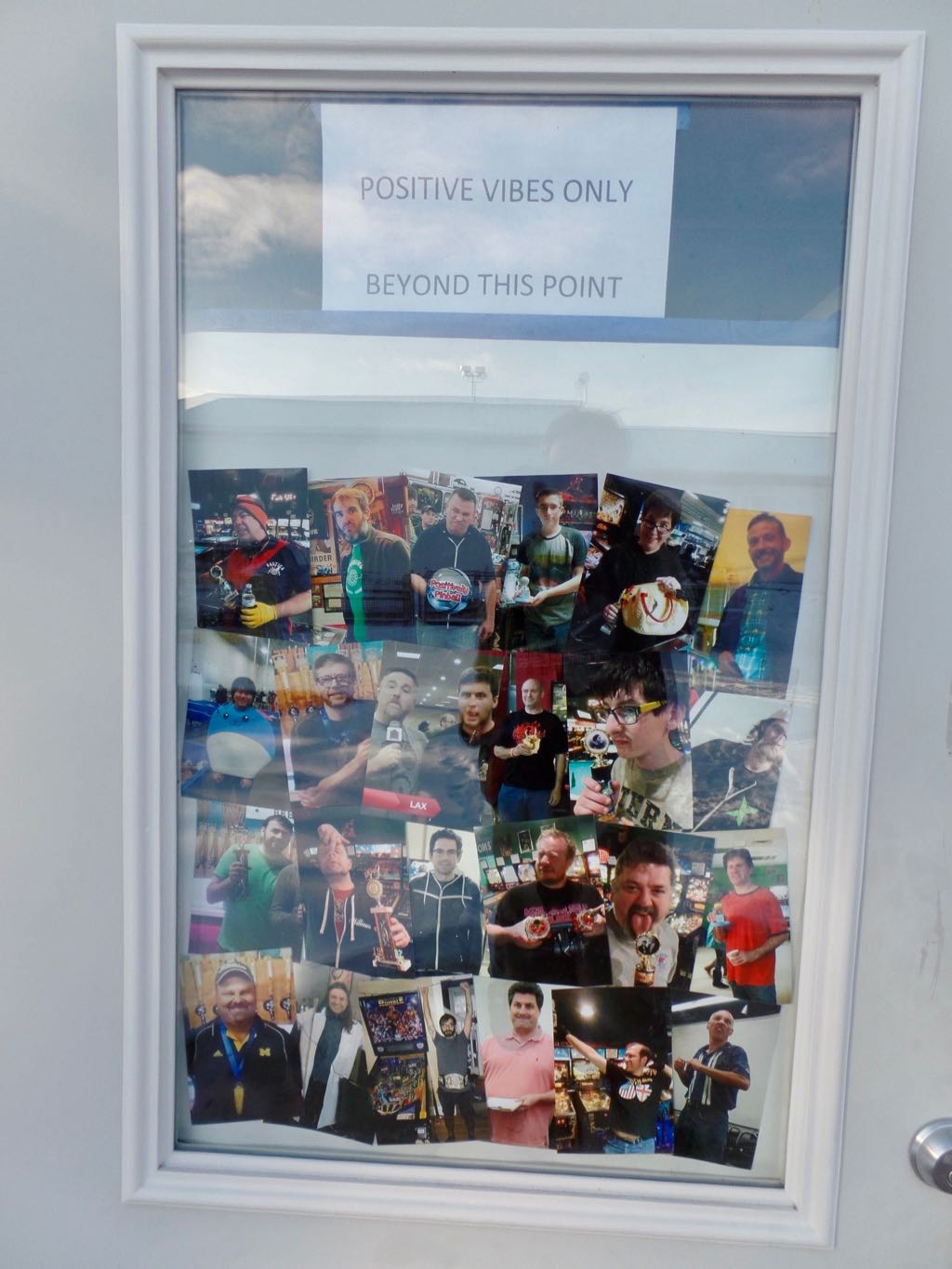 Collage of all the competitors for the event. Some were making goofy faces on purpose. Me, I just look ike that in pictures. See if you can find 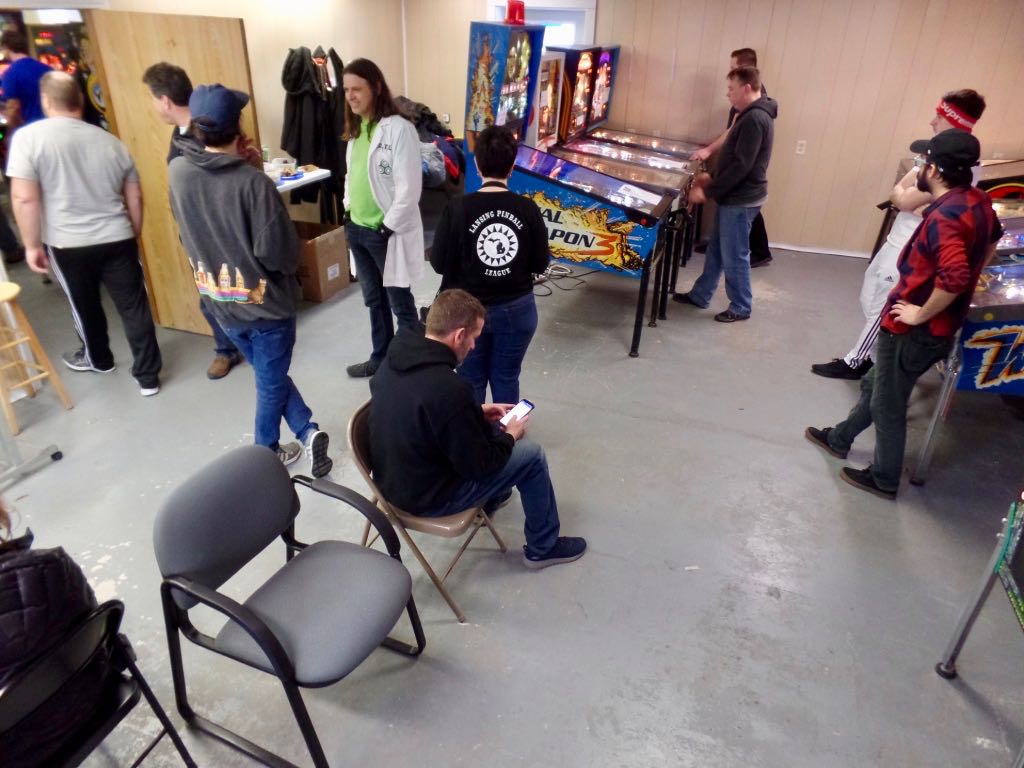 Later in the day. The State Championship Series is head-to-head play, making it (ironically) less valuable than it might be. But, there's still a lot of waiting around for your next opponent to be known. 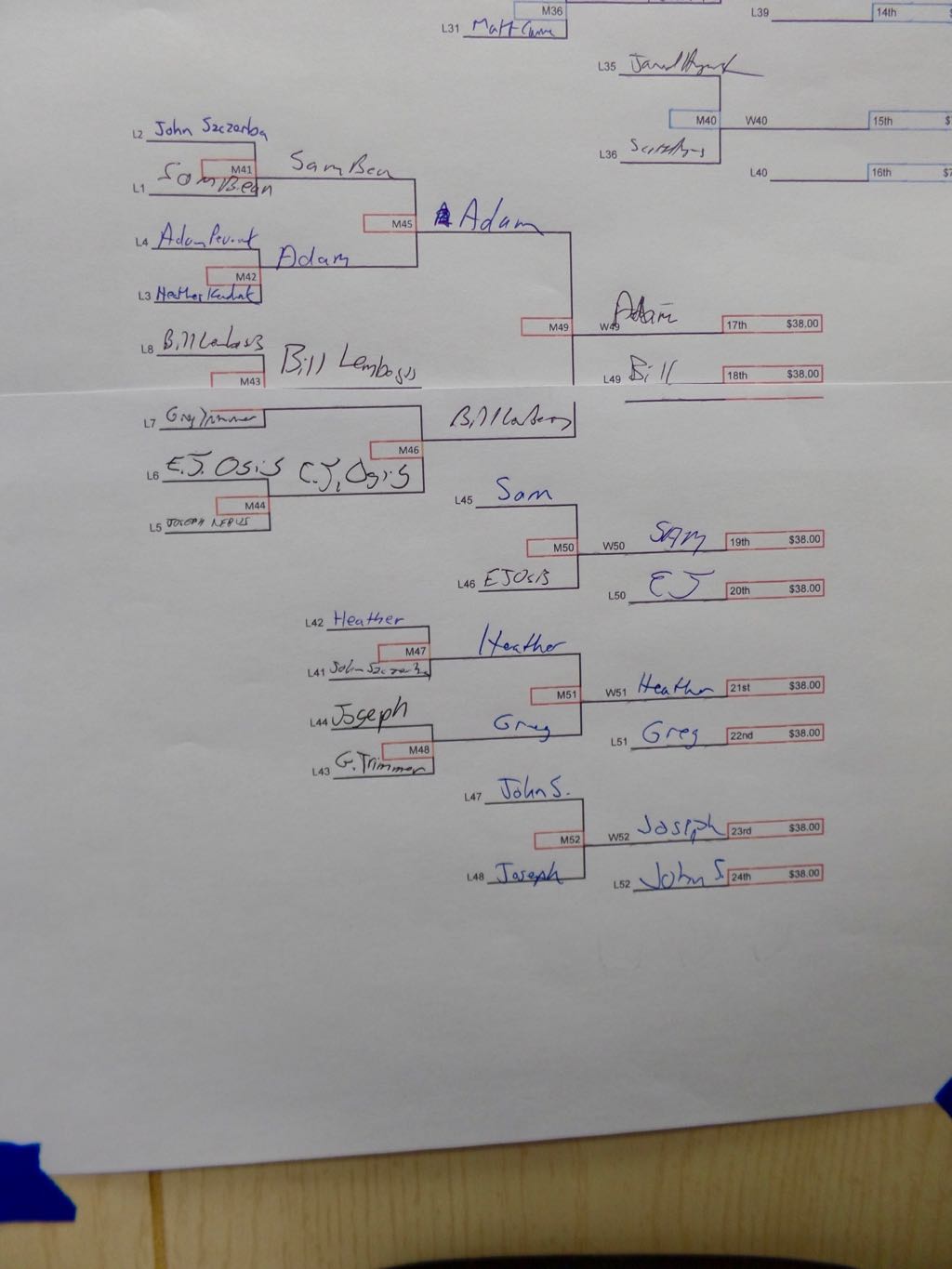 And here I plummet from a top-16 position all the way to 23rd place.

bunny_hugger has abetter day than me, finishing in 21st. I'm just sincerely glad we didn't have to face each other. 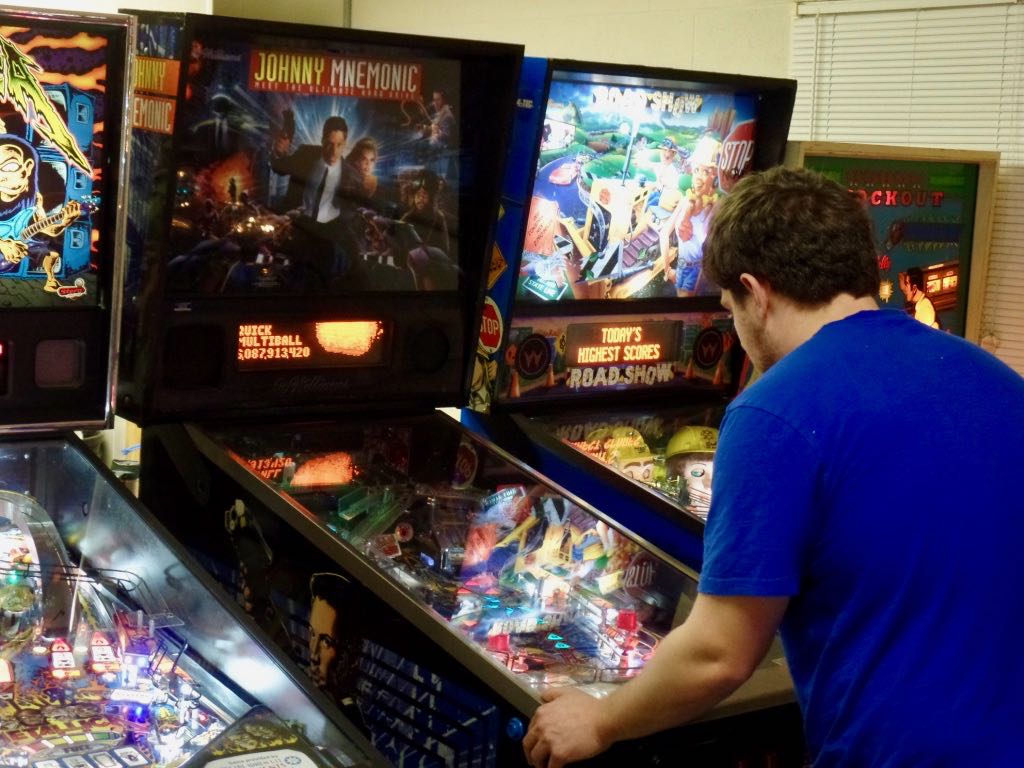 Final round! AJH versus CST and it comes to one of AJH's specialties, Johnny Mnemonic. 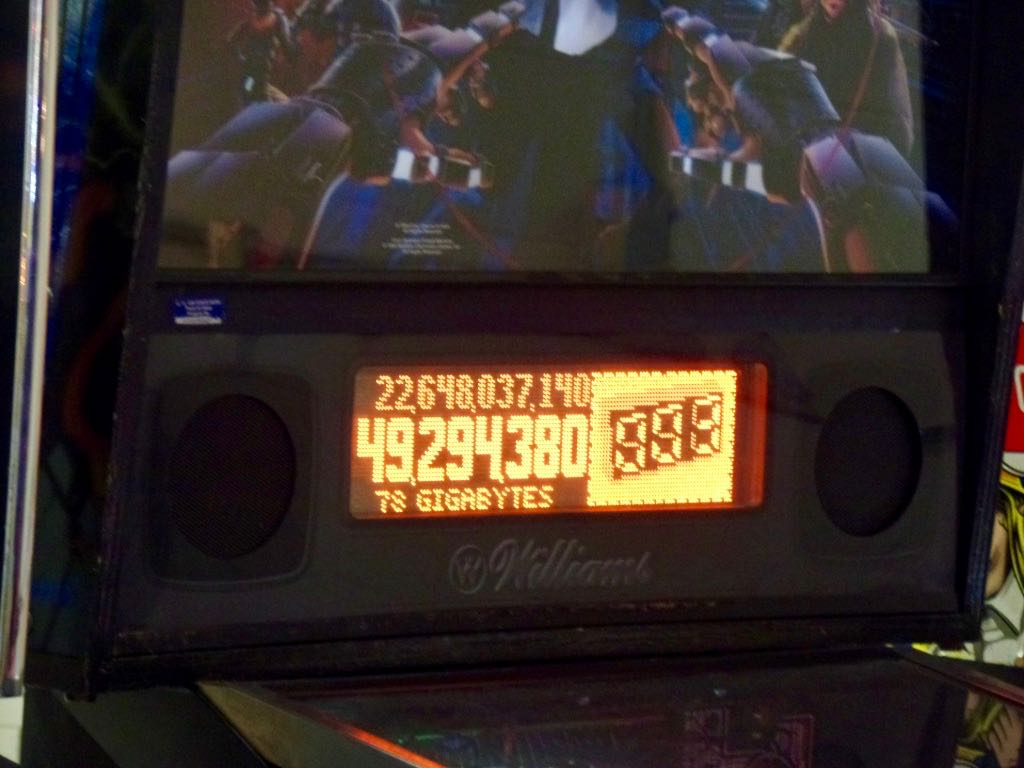 So, this was ball three. Johnny Mnemonic is a high-scoring game, but 22 billion is abnormally high. I can't blame CST for deciding that it was not worth his energy to try to fight back from a deficit that big. He just took the loss and they went to the next game. 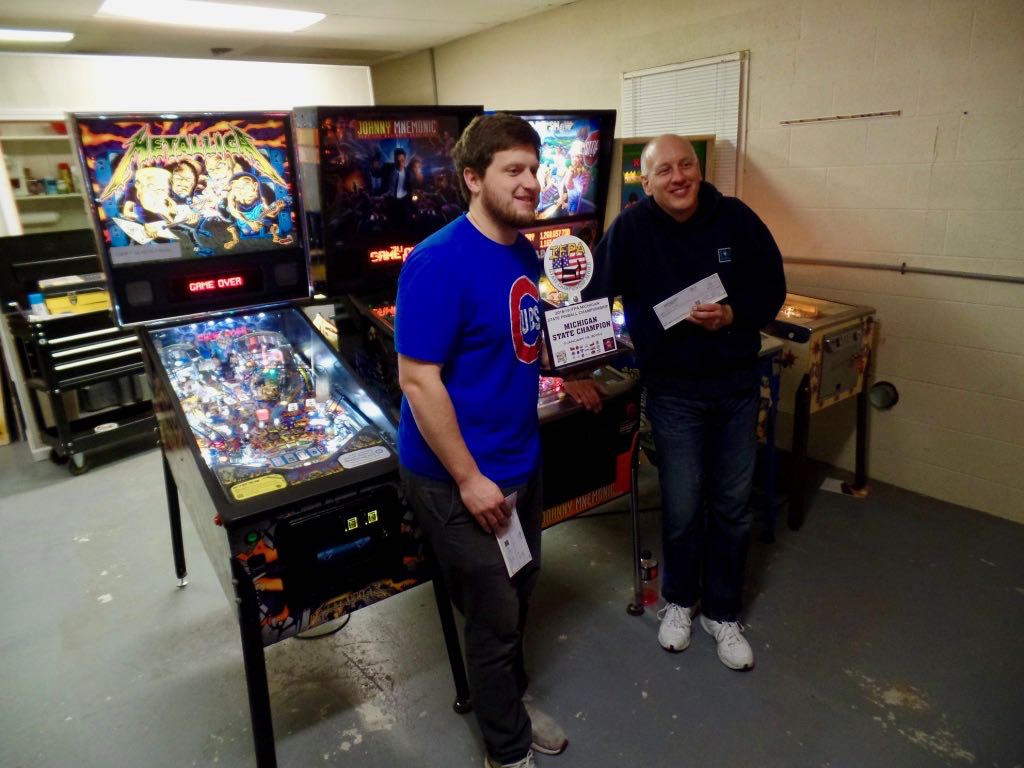 Trivia: In January 1714 the rumor that Queen Anne had died caused a slide in London stock prices. Her actual death later that year had no such effect. Source: Devil Take the Hindmost, Edward Chancellor.

Currently Reading: Mr Dooley's Philosophy, Finley Peter Dunne. And while Dunne, writing in 1899-1900, stabbed pretty hard with that Democrats-and-Republicans thing, he draws blood and leaves organs sprawled on the ground with a piece titled, The [ Soft N-Word ] Problem:

“I'm not so much throubled about th' [ dialect version of the Soft N-Word ] whin he lives among his opprissors as I am whin he falls into th' hands iv his liberators. Whin he's in th' south he can make up his mind to be lynched soon or late an' give his attintion to his other pleasures iv composin' rag-time music on a banjo, an' wurrukin' f'r th' man that used to own him an' now on'y owes him his wages. But 'tis th' divvle's own hardship f'r a [ C-word ] to step out iv th' rooms iv th' S'ciety f'r th' Brotherhood iv Ma-an where he's been r-readin' a pome on th' 'Future of th' Moke [1]' an' be pursooed be a mob iv abolitionists till he's dhriven to seek polis protection, which, Hinnissy, is th' polite name f'r fracture iv th' skull.”

and to finish off the essay

And I mean I do believe the North to have been far better than the South for Black populations, all along. There was a uniform direction for the Great Migration, after all, and one section of the country that would pass laws prohibiting the offering of jobs to Black people. But I'm not such a fool as to think that the North was safe.
[1] I believe this to be a slur and would edit it except I so fail to recognize the word through the eye-dialect that I don't know how to describe the word or its connotations. I do not intend offense and apologize for any needless upset.
Tags: anniversary, michigan state pinball championship
Subscribe