Don't you want to know What's Going On In Gil Thorp? Is Gil Thorp really not doing a pandemic story? April - June 2020 saw not a mention, but, I'll tell you what the strip did do.

Our first big non-pinball activity of 2019 was going to a Walk The Moon concert in Grand Rapids, at a venue named 23 Monroe. (It's on Monroe Street.) It's a pretty hip place and the crowd was quite big, befitting Walk the Moon's status as now a technically successful band. Let's look. 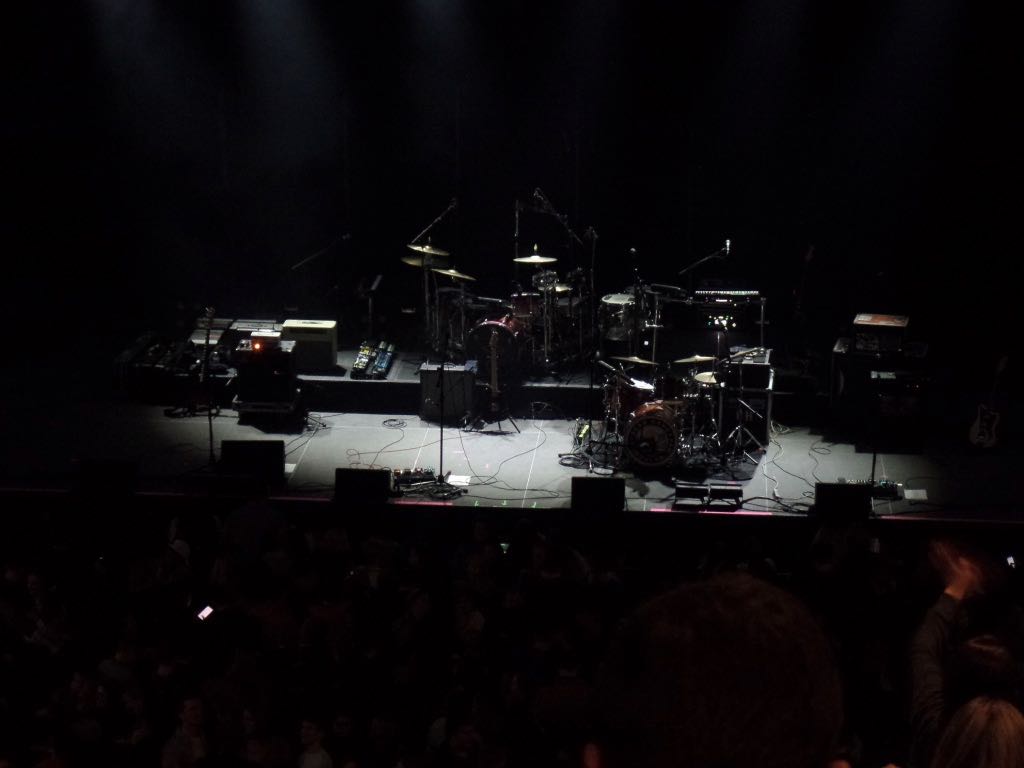 Getting the stage ready! The opening band's gear set up before the show. 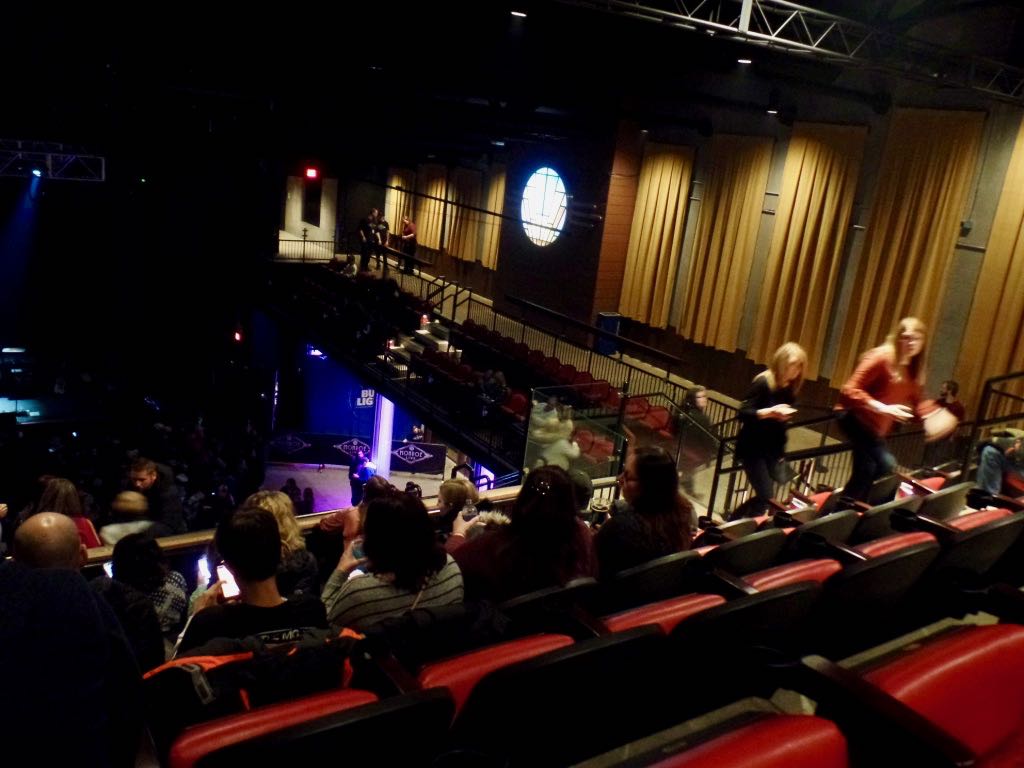 A glance at the sides of the auditorium; there's that nice faux-stained-glass image in the circle there that I think is the venue's logo. 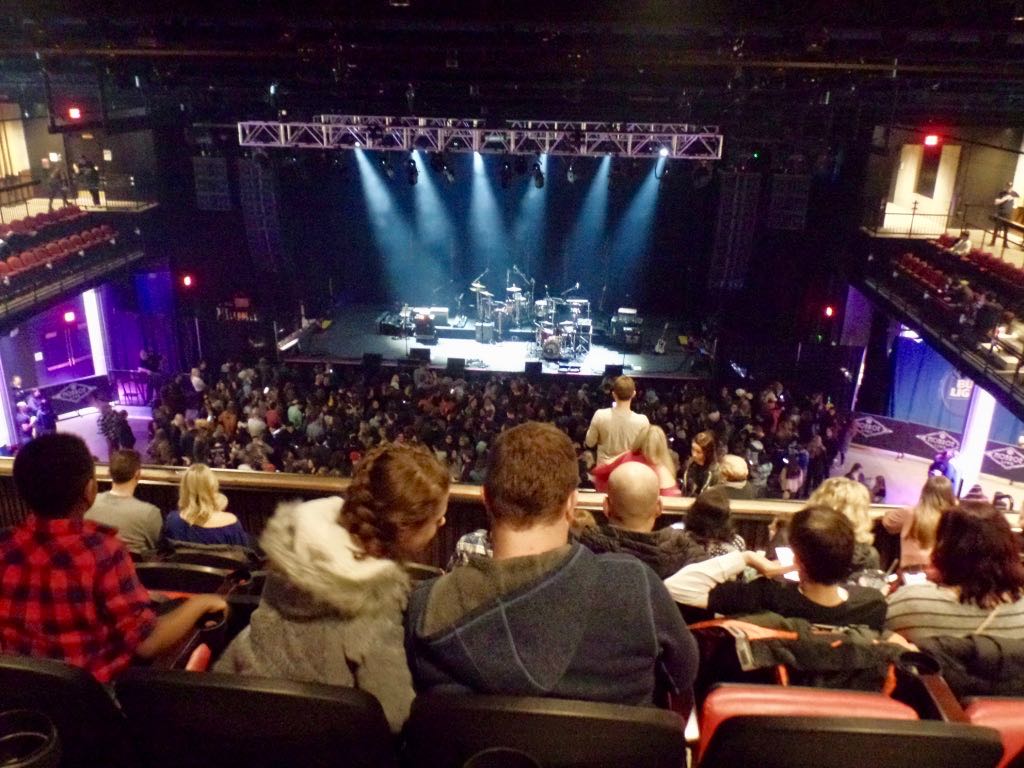 And here's a look at the stage. So, not the closest seats, but they are ones that gave

bunny_hugger a clear view of the stage, which is something. 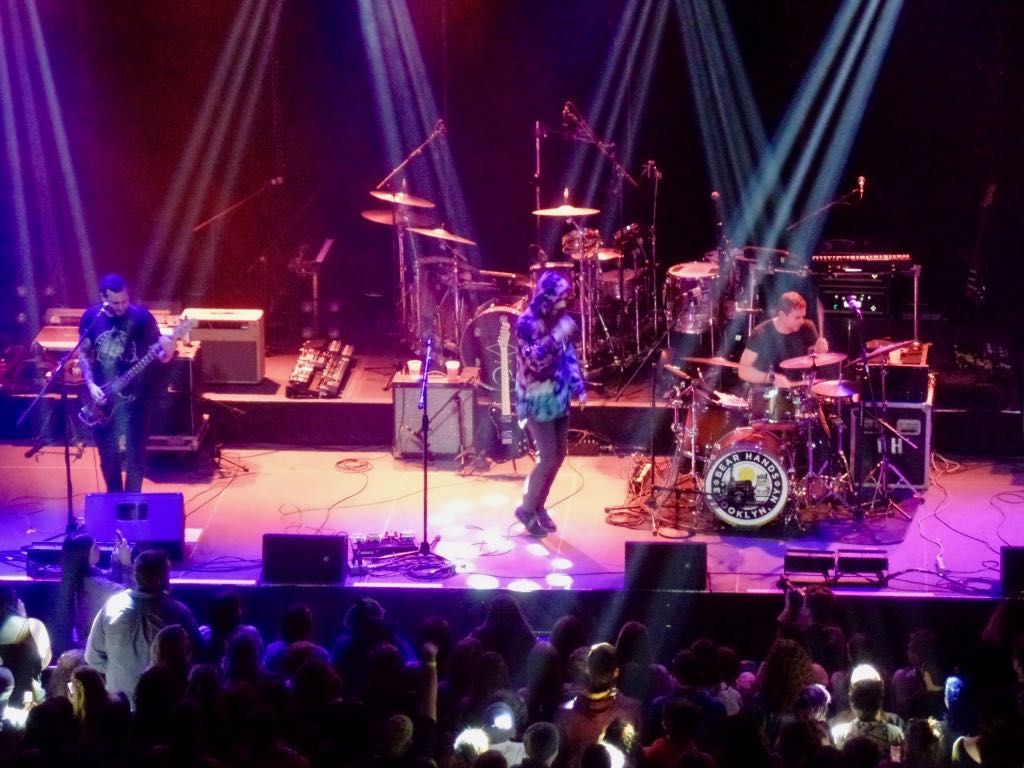 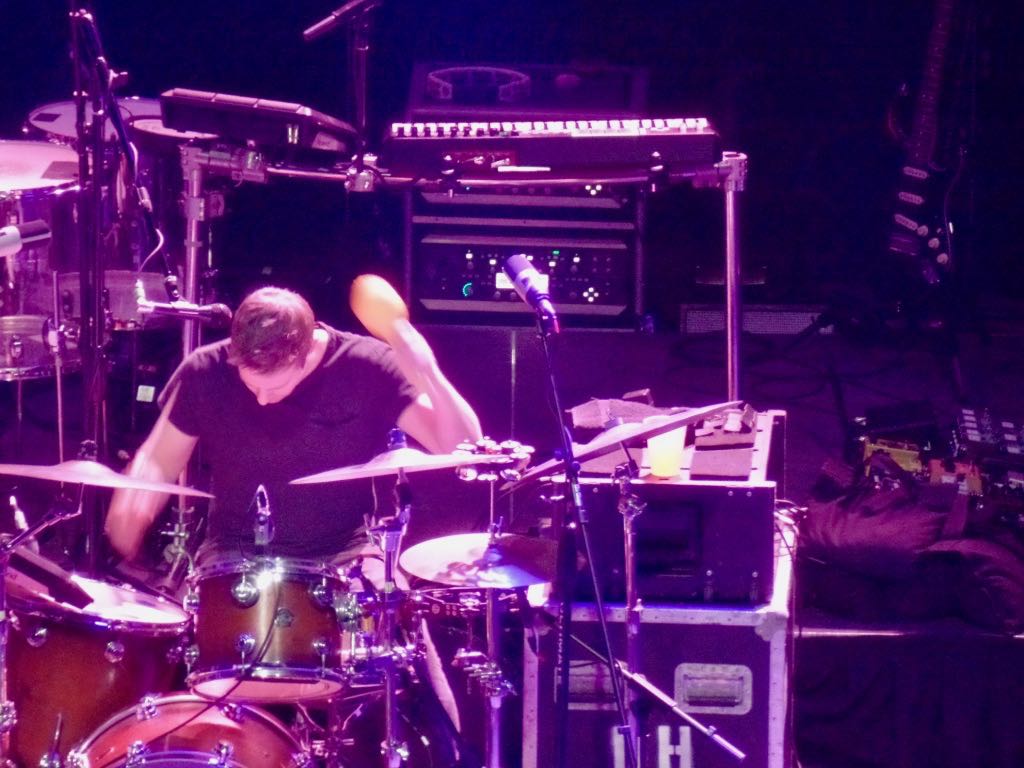 The drummer for Bear Hands showing off his trade. 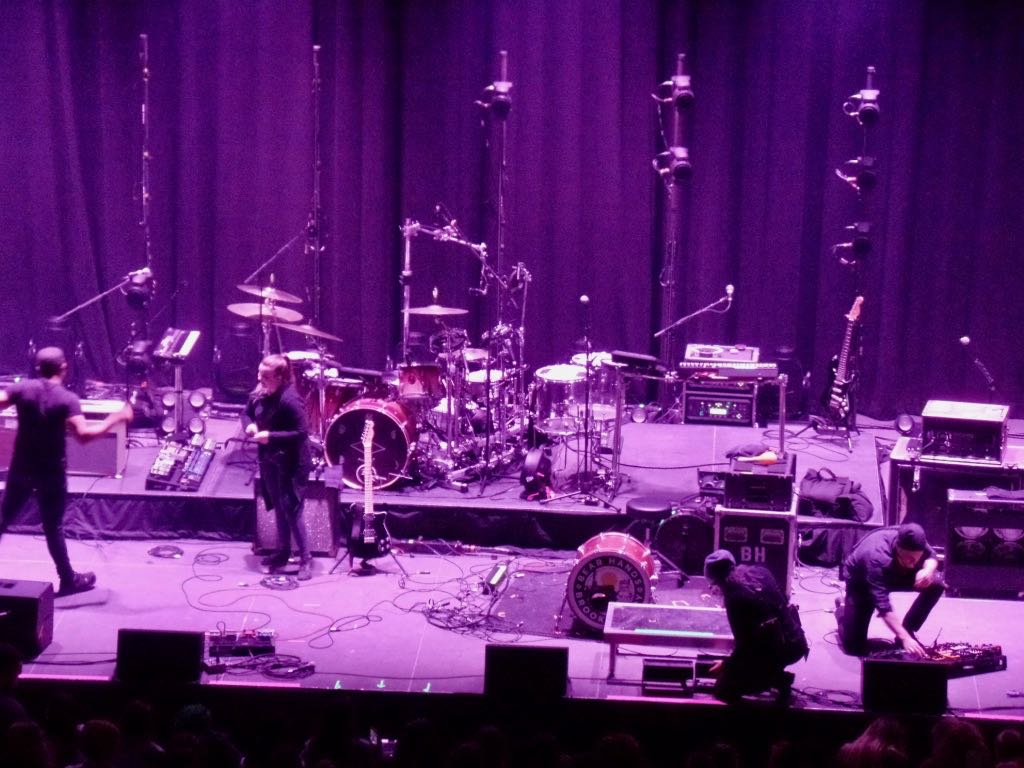 Stage crew working to get things re-set for Walk the Moon. 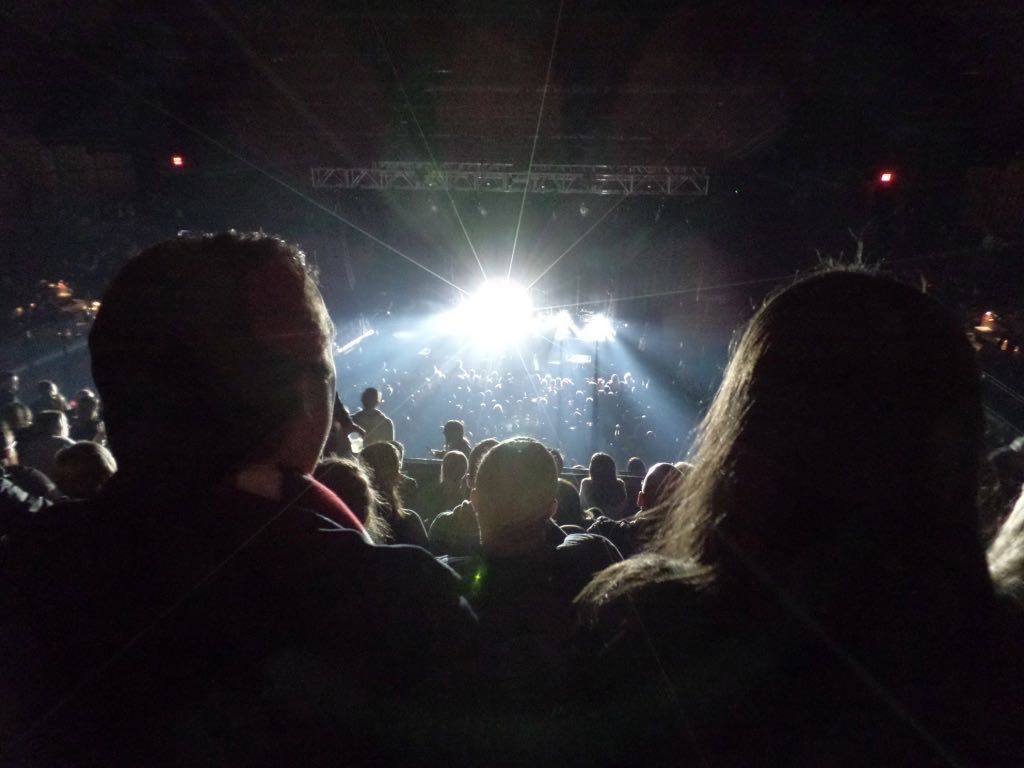 The circle of life! Walk the Moon has in our experience always taken the stage to Elton John's song, and we can only guess why. (If they're not furry they're seeing how close they can get without being called out for it.) 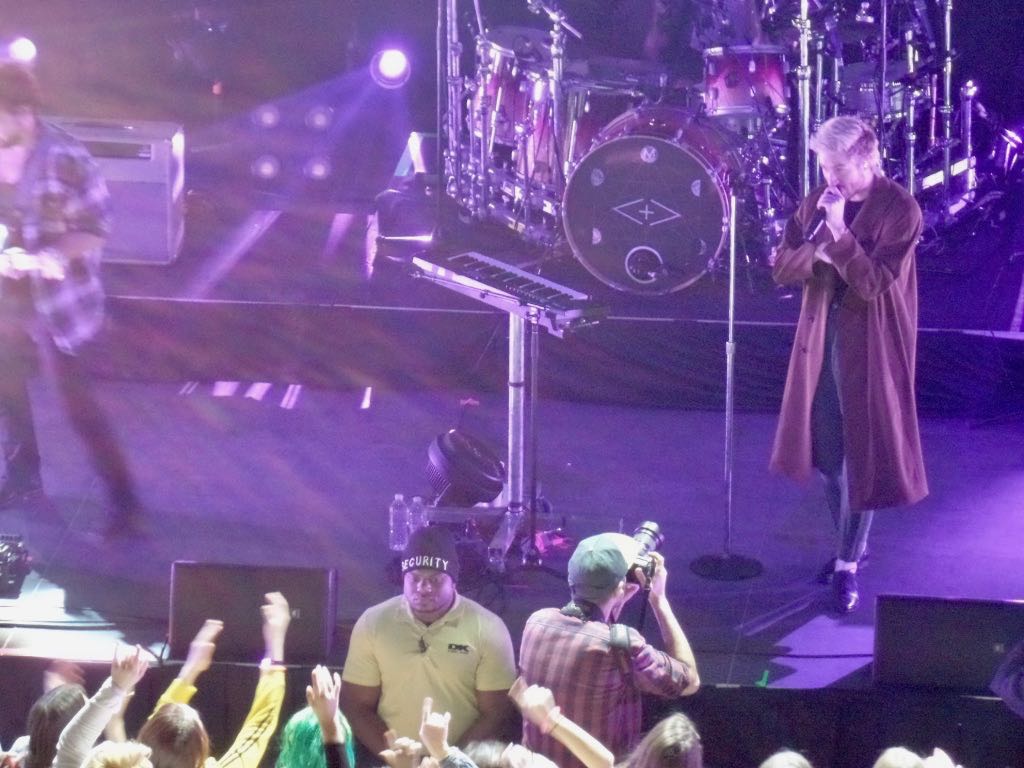 I can't tell you why the lead singer was wearing a long coat like this, sorry. I know why I picked this picture, though: it's the shot of the guy taking his photo with a pretty big camera considering he's five feet away. Also maybe the look on the security guy. 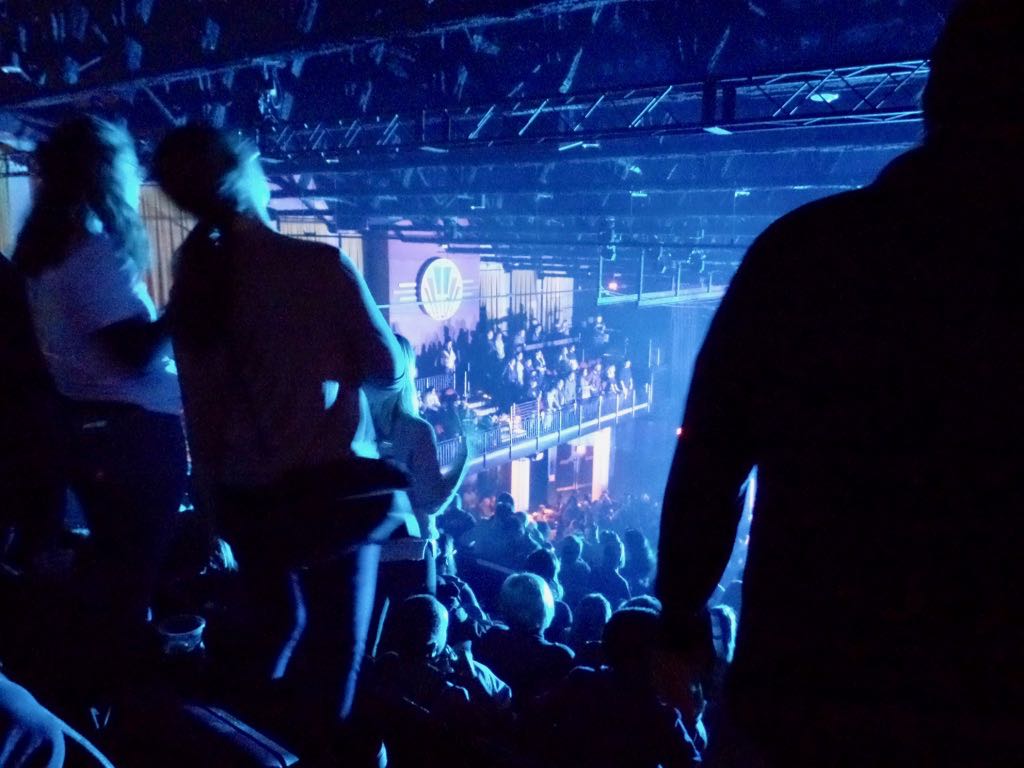 The song's fun enough for some but not all people to get up and sing along. I suspect this was their cover of the Ghostbusters theme. 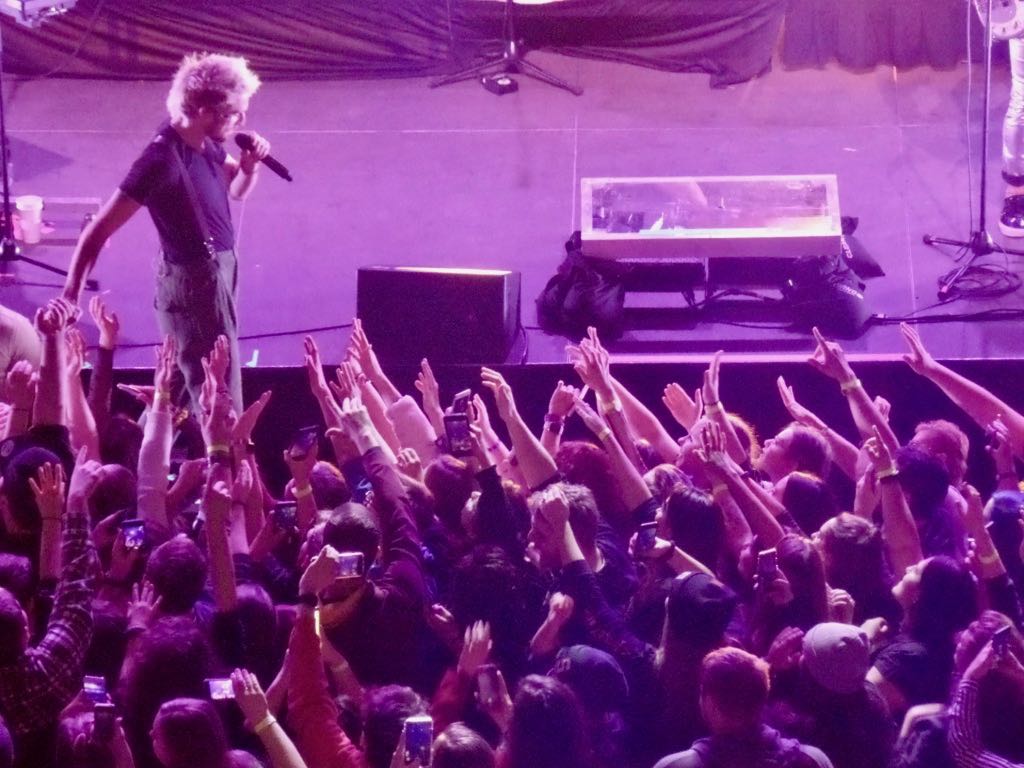 o/` I said I'm not gonna take it from you, I'll let you give it to me o/` --- a much-repeated verse from ``Jenny'', the most outright call-and-response song they do in their set. 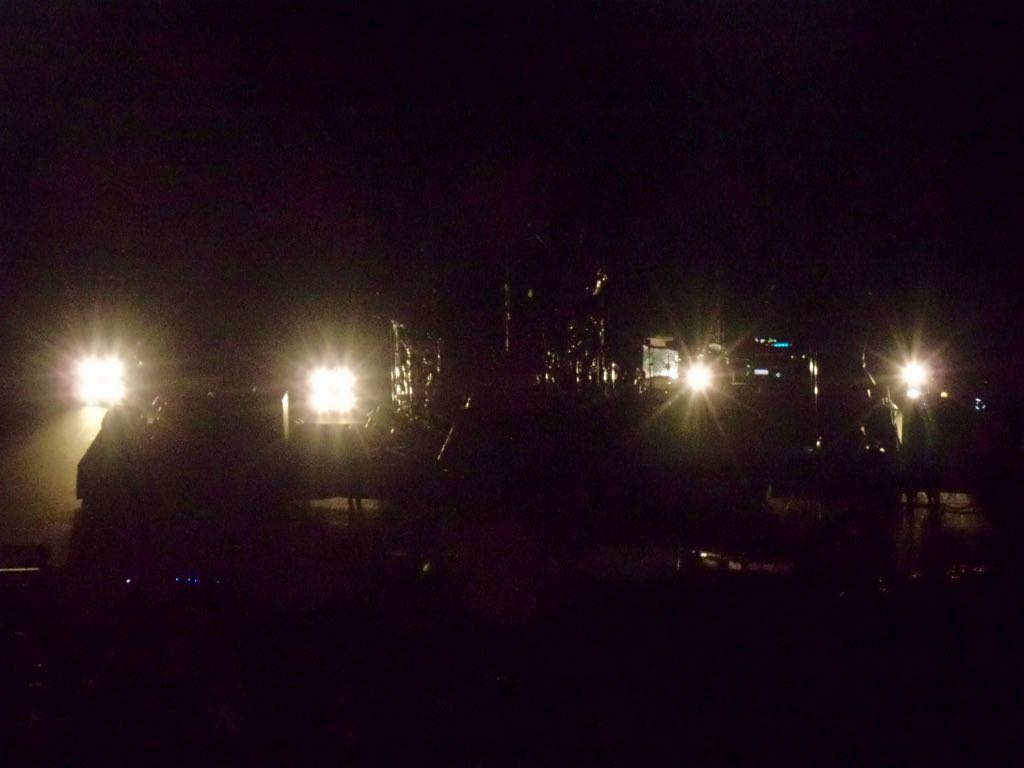 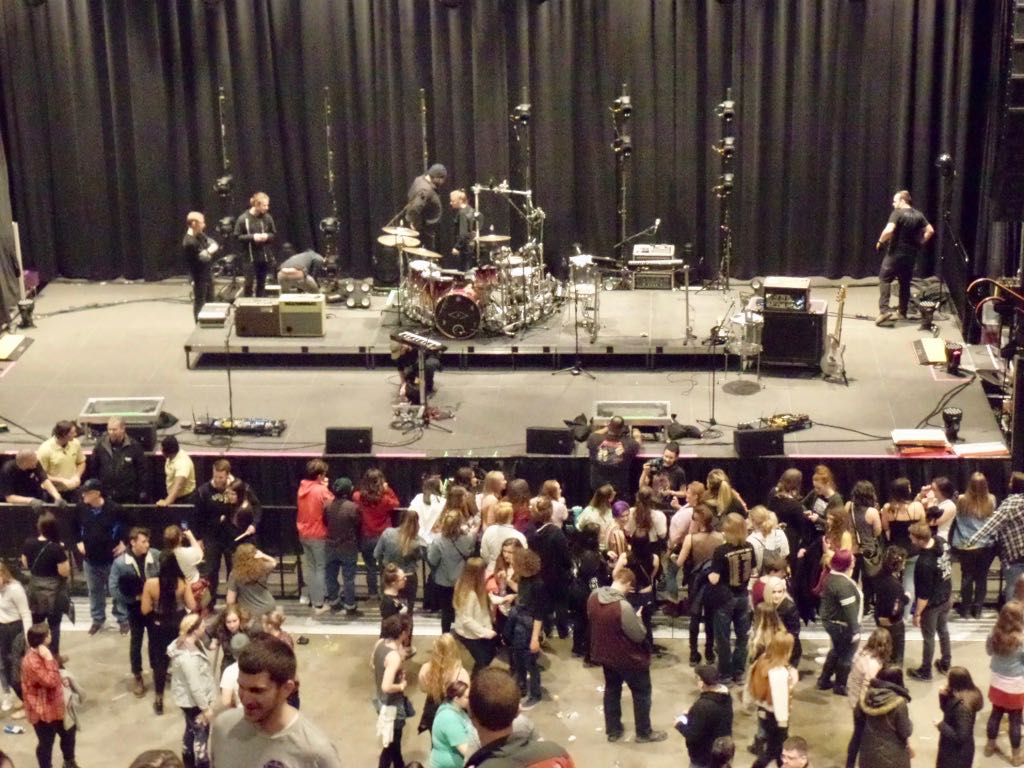 Crew cleaning up after the concert, and people milling around deciding whether they want to do stuff like get in the merch line. We hung out a while waiting for the coat check line to not be so terribly long, and soaking up the atmosphere of a finished show. 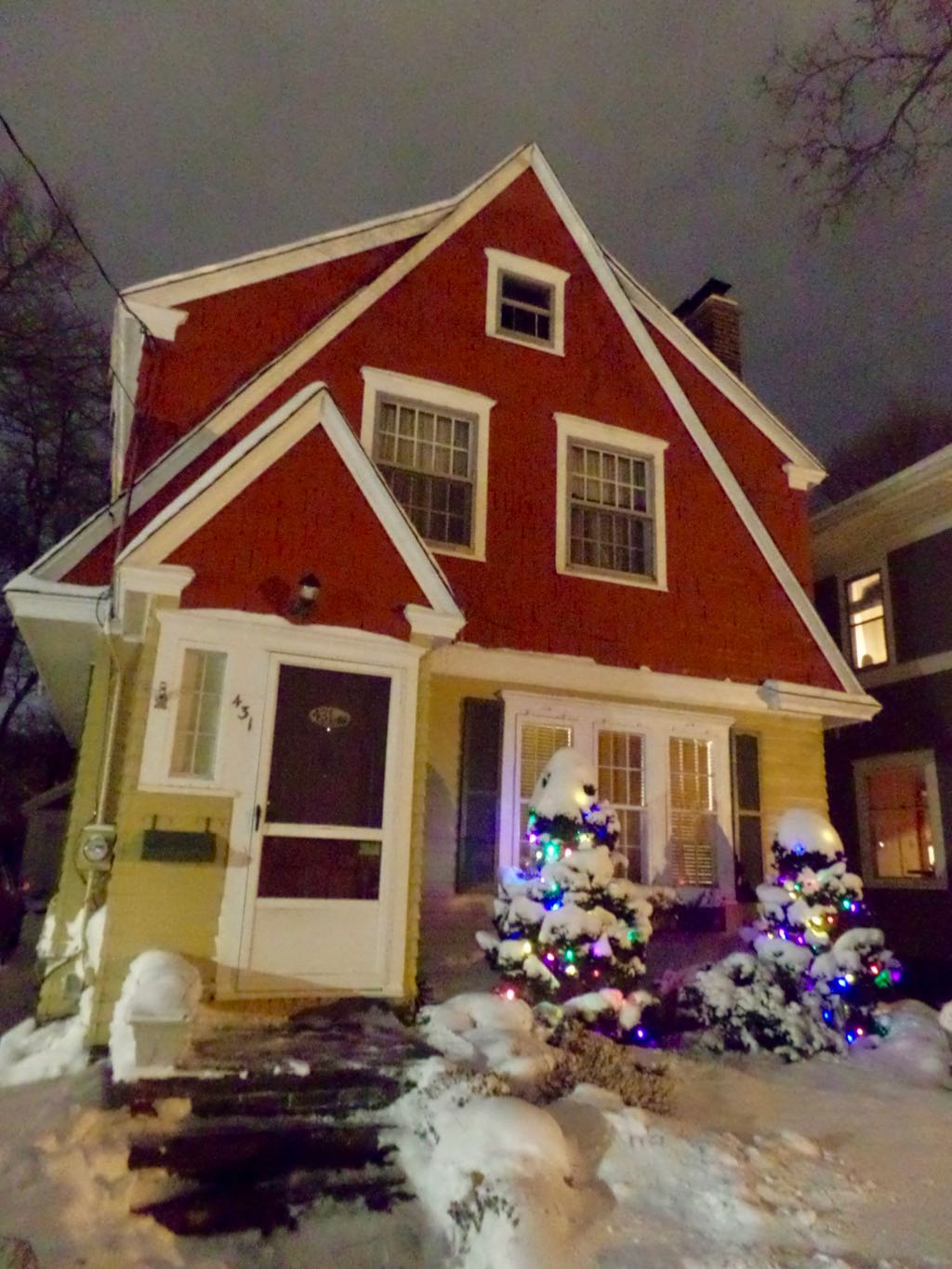 Our home, still decorated for Christmas and enjoying a couple inches of snow. Our house enjoyed the snow more than I enjoyed doing anything with it. 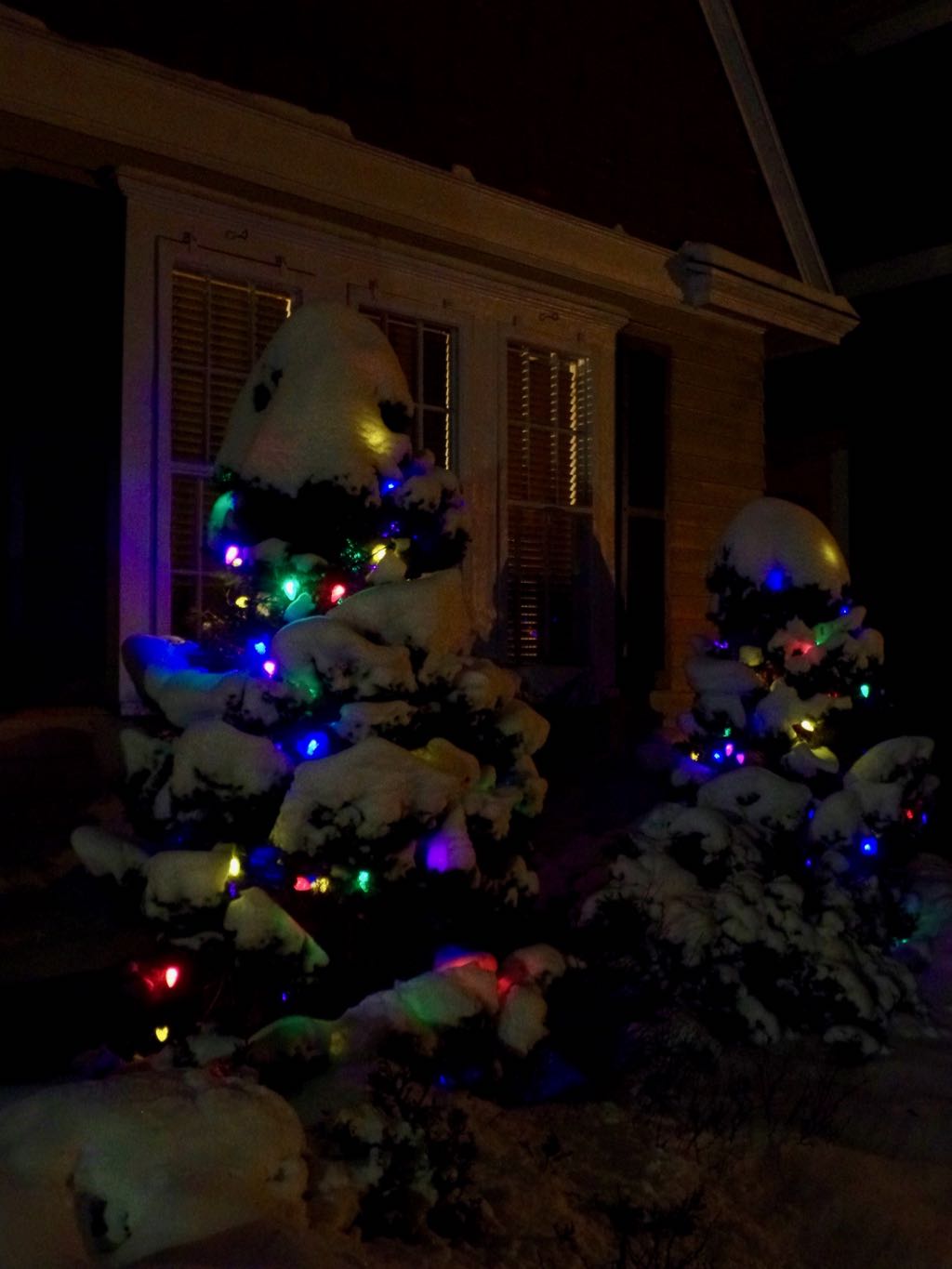 But, the snow makes the lights in the bushes out front look great, even without a flash.

Trivia: Among the arguments English bishops used to delay adoption of calendar reform was that the world was about to end soon, so the reform of the calendar was not particularly useful. Source: Mapping Time: The Calendar and its History, EG Richards.

Currently Reading: The Untold Story of the ZIP Code, US Postal Service Office of Inspector General report RARC-WP-13-006. No individual named that I can figure out. I expected more stuff about, like, how the system was designed and what kind of thinking went into even little things like low-numbers-east, high-numbers-west but, no. There's a bit about how big cities started using two-digit local zones in 1943, and in 1944 the Philadelphia postmaster proposed dividing regions of the country into three-digit codes for general sorting, and then how 19 years later they put these two together for five-digit Zip codes and that's about it. And then a lot of attempts to quantify how much money is saved, or gained, by the existence and use of Zip code, in-between paragraphs in which they admit there's no way to quantify that. In short, this is an extremely me document to exist, and yet it's not me enough for me.