Nothing's happened yet today and yet I have to feel

In better circumstances, we'd probably have spent today on the road. I bet meeting up with MWS later after noon than we really wanted, but, all right. Then the long drive down to Cincinnati, stopping, exhausted, near enough Kings Island to get there. We'd regret not being able to show MWS Jungle Jim's, but, there's events we have to meet.

For the 4th of July we went to

bunny_hugger's parents' home. The city fireworks were cancelled, down there and here in Lansing, like you'd figure. We figured to, as a couple weeks ago, spend the day outdoors, have something off the grill, and set off fireworks after dark. Our one big change from the previous visit was we got some $5 beach umbrellas, the better to not bake in the afternoon and evening sun, and we succeeded in this. We were warm, yes, but never so hot as to be in danger of baking.

After dinner, and after dark, we went for a walk around town. This took longer than should have for the distance walked, but we had reasons. One was a rabbit we saw by Victory Park, just grazing on the edge of the sidewalk until one too many cars drove past. Another was my insistence on stopping and reading every little plaque we passed. There turn out to be a lot of small parks in that town, including one that commemorates the shop, formerly on that location, which hosted a shoe-repairer for fifty years. The Electric Shoe Repair Shop, I think was the name, and I assume it means the repairs were done with electricity-driven machinery because electric shoes sound like trouble.

We afterwards set off fireworks. Well,

bunny_hugger's father set them off, while I hung back, him rushing to light the fuse and then walk directly at me, obscuring the fountain or whatever. I'm sure it just seemed like that.

bunny_hugger had gotten a couple of fireworks at Meijer's, including one ten-dollar variety package that had a lot of small fireworks. This turned out to be a surprisingly good value, although it was one of her father's that made a big enough light show that people up the block applauded.

When we drove home we came into Lansing and saw a sulphurous haze covering the whole Eastside. If the accounts are to be believed, from about 10:30 to 11:30 the neighborhood was a continuous racket of explosions, so many and so frequent that people could not hold conversations. It's hard to believe, but when we got there after about midnight there was the haze and the smell of gunpowder. And, always on some other block over, fireworks going off, sounding like the last half-minute of microwaving popcorn.

It's hardly been long enough to say but it does seem like the rolling fireworks show that's been all town since Memorial Day was lessened on Sunday. It would be nice to think that everybody's finally gotten it out of their systems. We'll see. 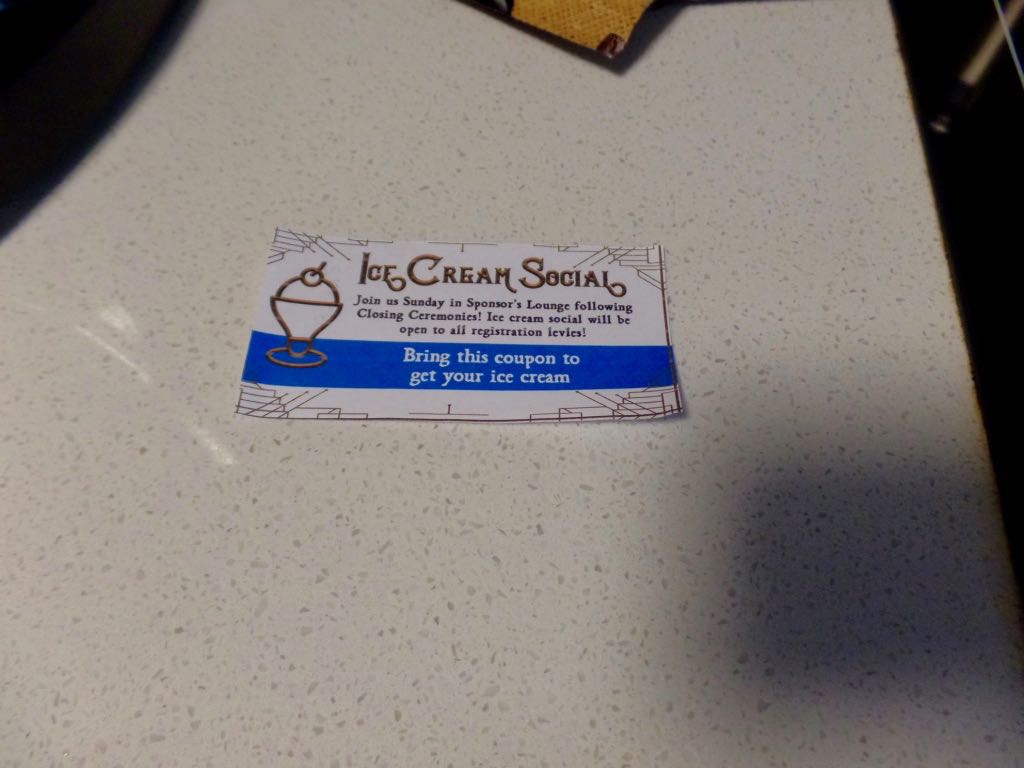 Oh yeah, sponsors were entitled to ice cream. It was set for after closing ceremonies, a nice way to add some life to a dull evening. 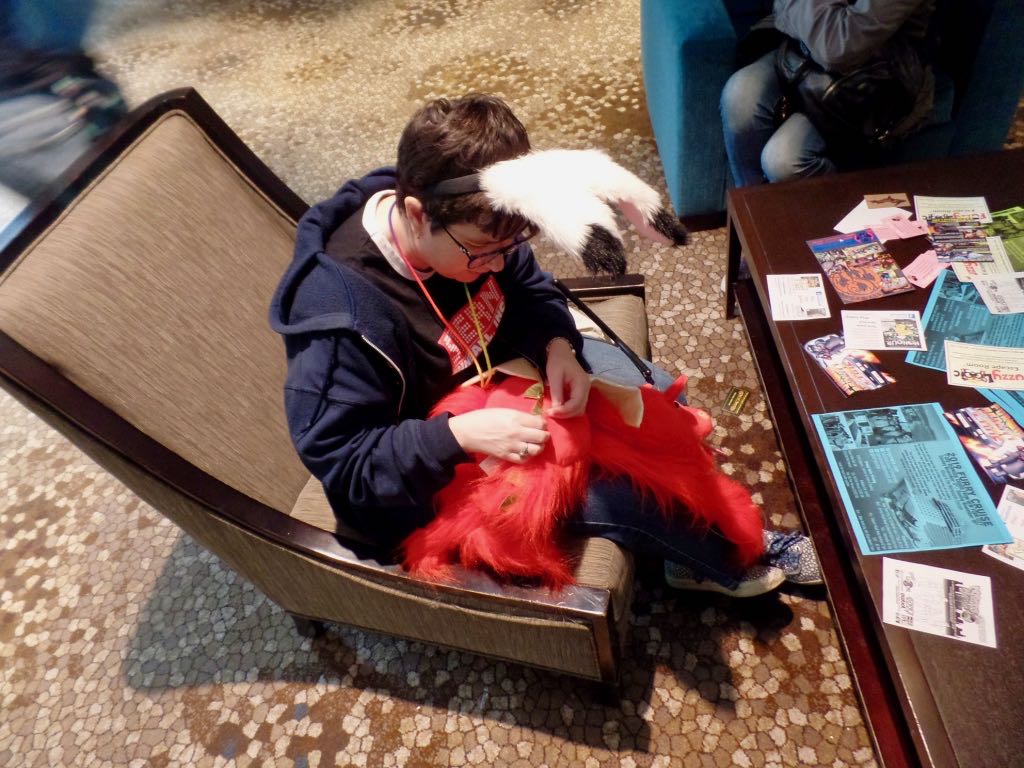 bunny_hugger working on some emergency repairs to her fuzzy dragon marionette. She would not be at all happy with her work, even her emergency work, and it would spoil so much of her mood Saturday. 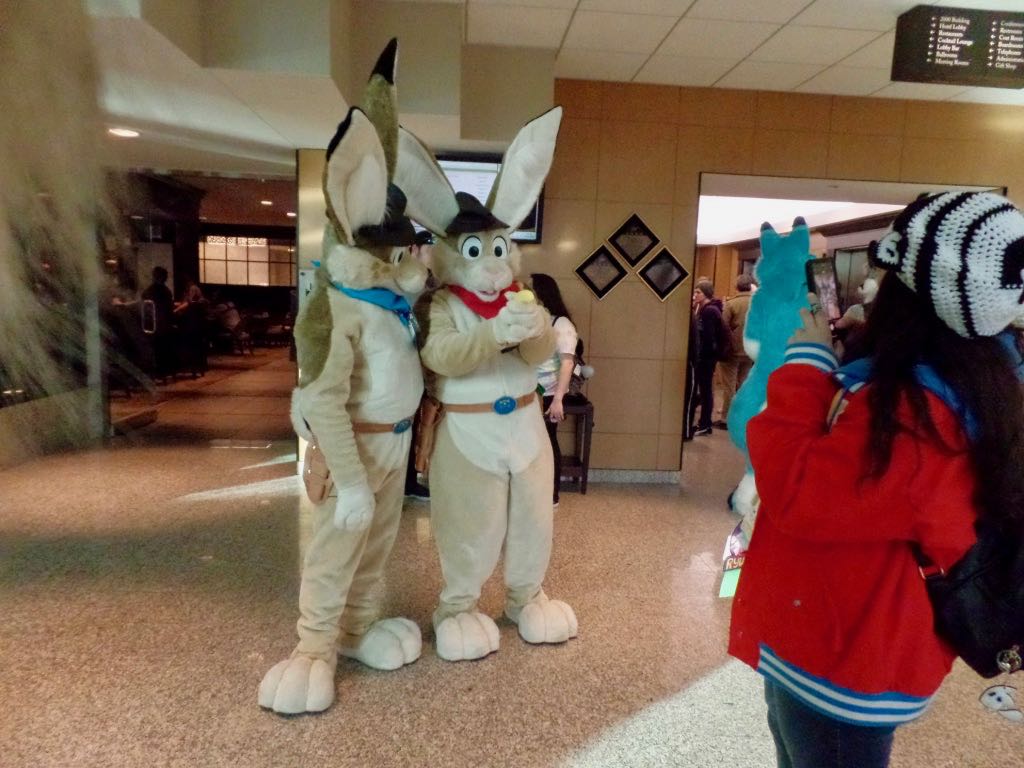 The two jackrabbit sheriffs who we kept seeing at this con. Someone playing a virtual reality game in the video games room. 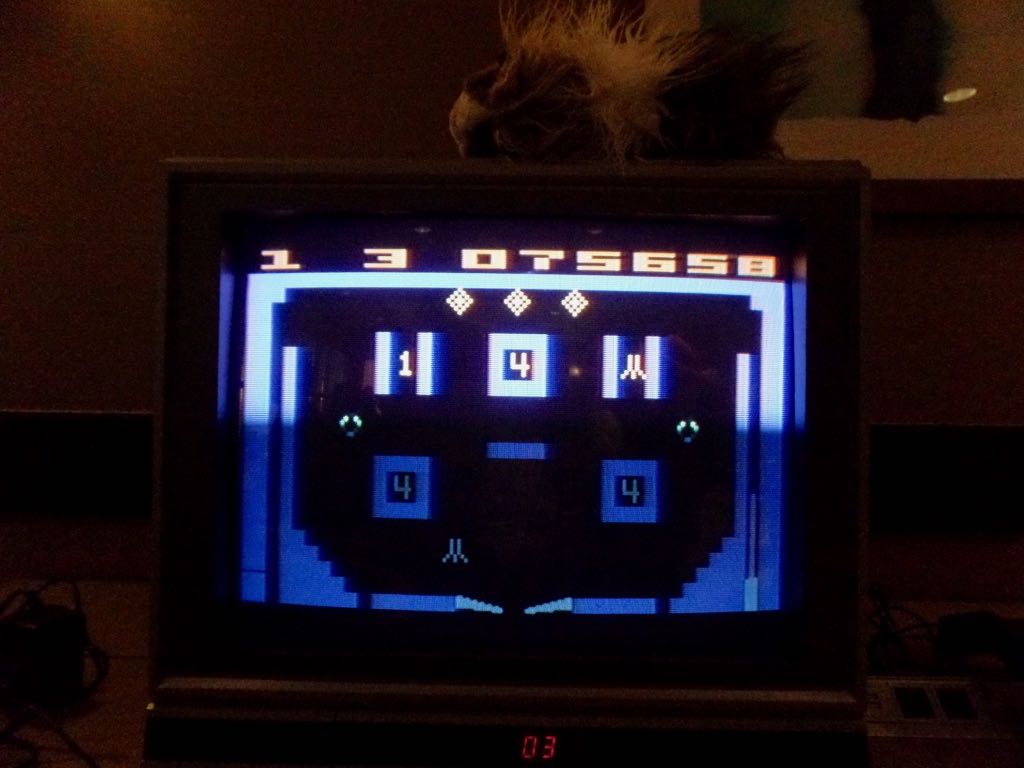 Me, I play the Atari 2600 Pinball game and get enough of a hang of it that I threaten to reach the point where the game will never ever end. The secret, as often happens with older games, is to flip as little as possible and just let things happen. 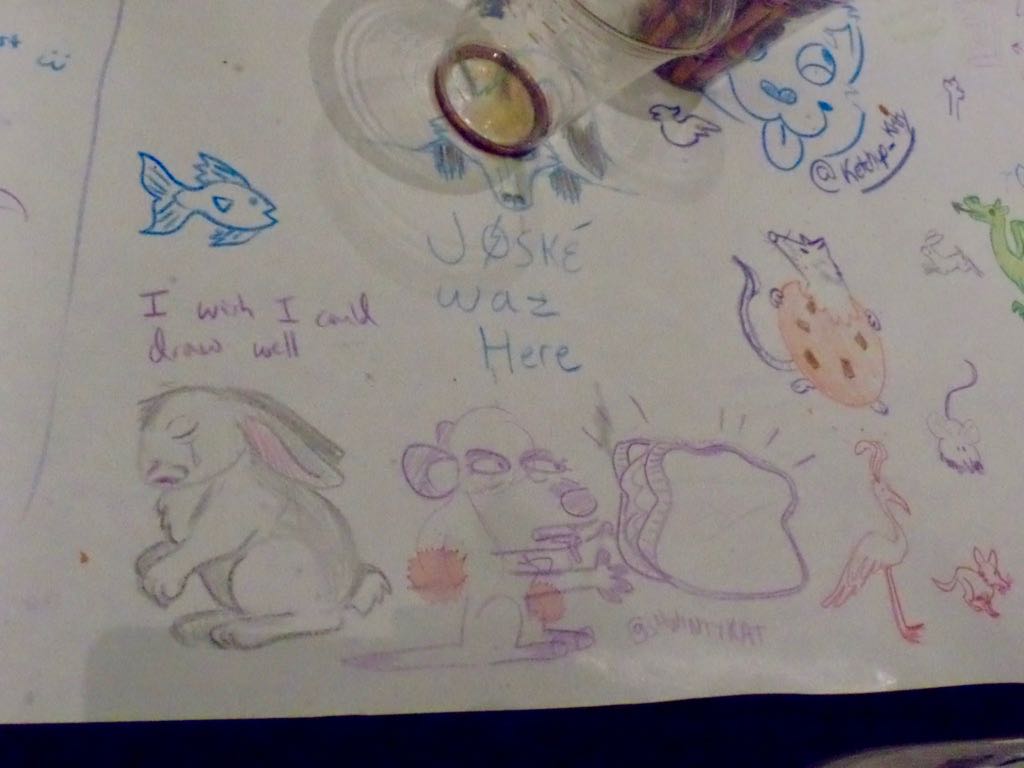 bunny_hugger adds to her Hospitality table sketching with a terribly unfair assessment. 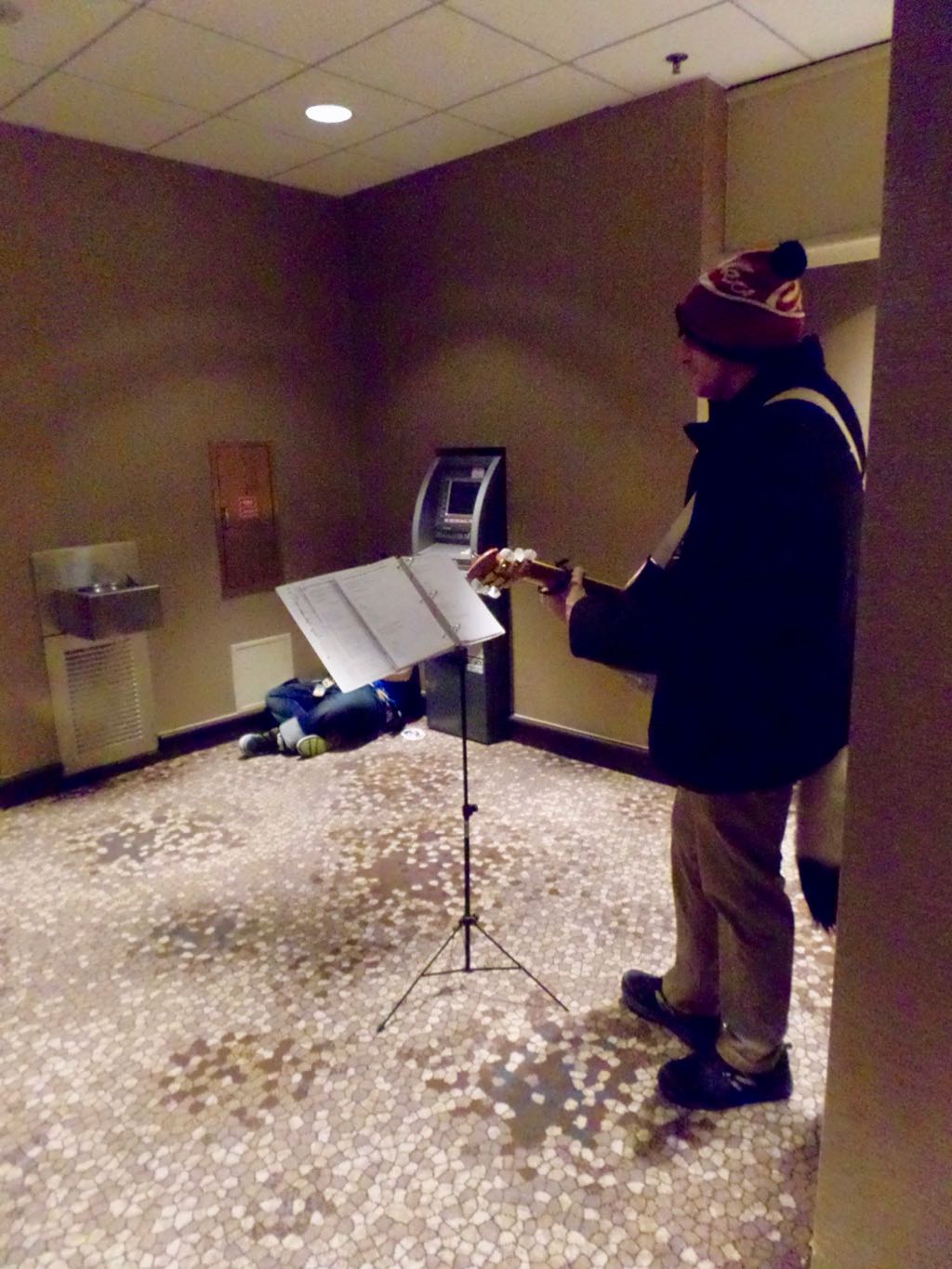 Guy with an acoustic guitar and a music stand. He was hanging around outside the main ballroom. 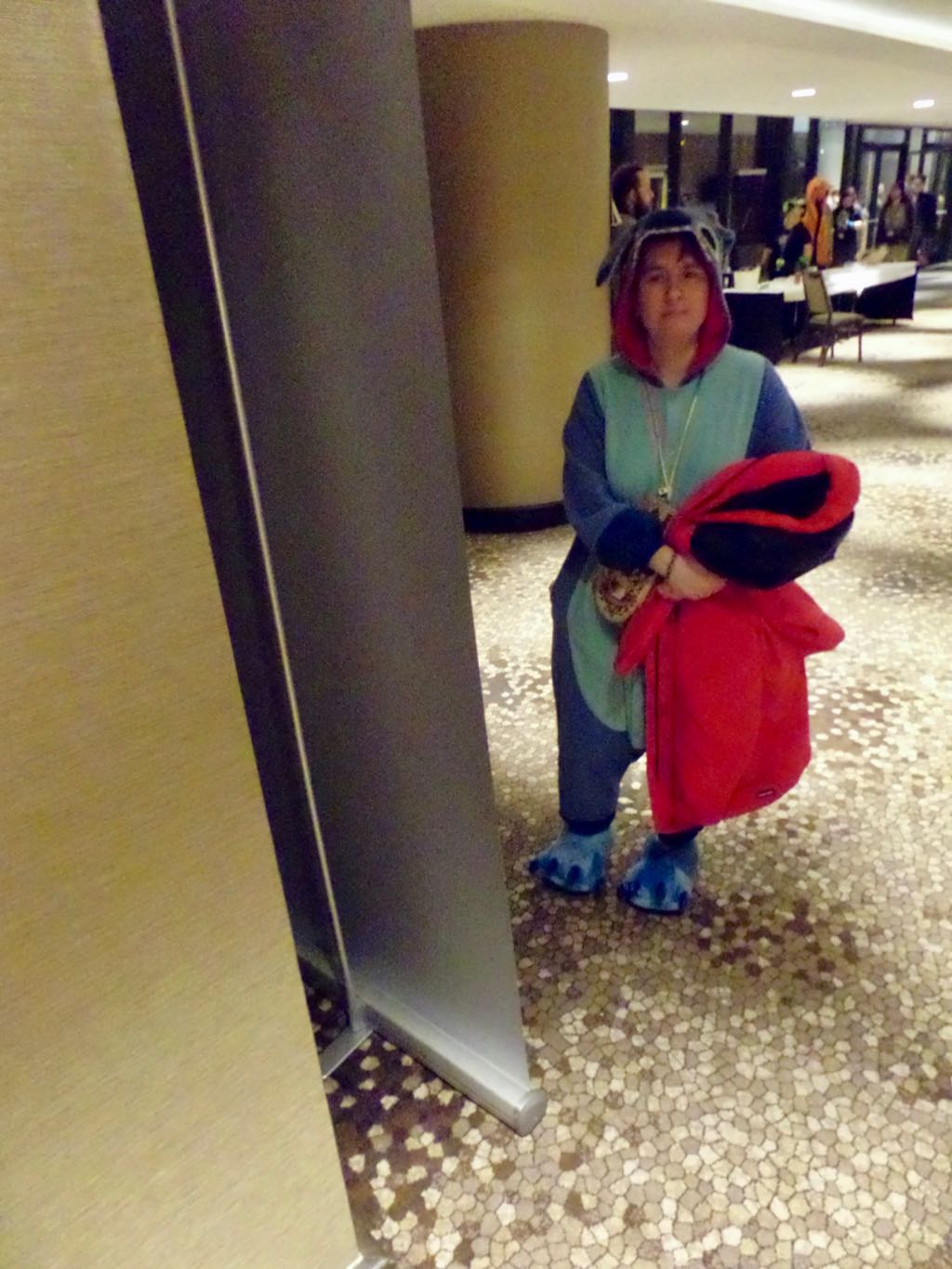 bunny_hugger in her Stitch pelage, ready to go dancing. Also ready to go back outside since we'd driven from another hotel and we really needed our jackets to get to the car. Problems of a spring con, you know? 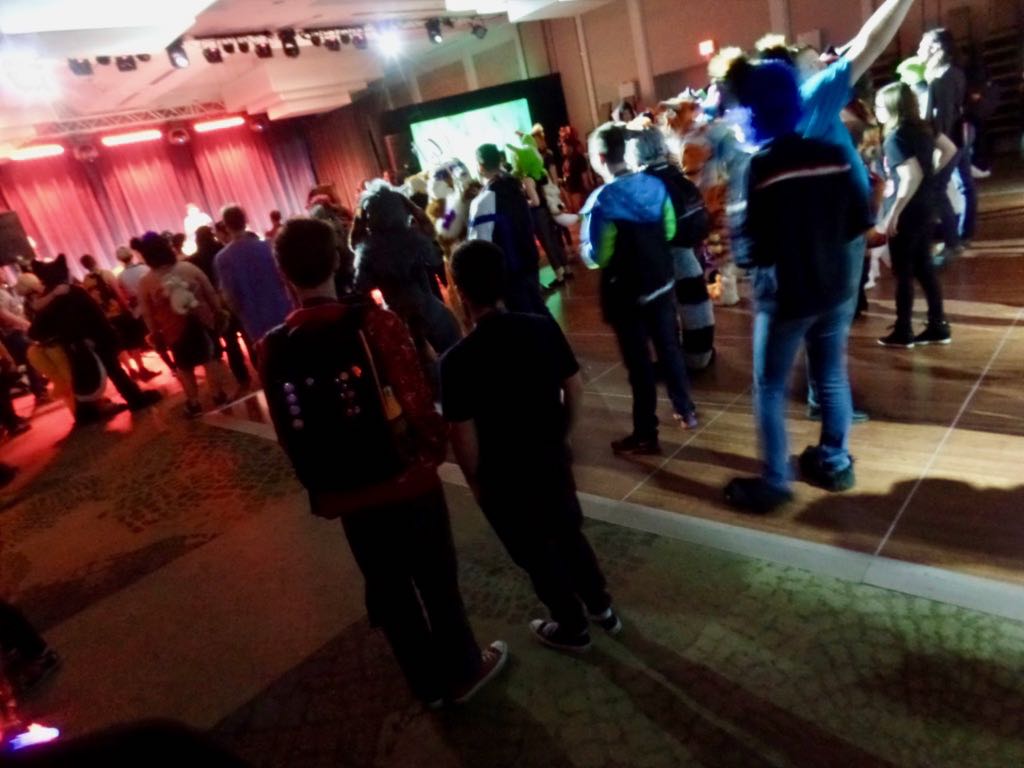 The Saturday night non-safety dance, at one of those moments when everyone's paused to listen for instructions or something? It may have been a change of DJs. 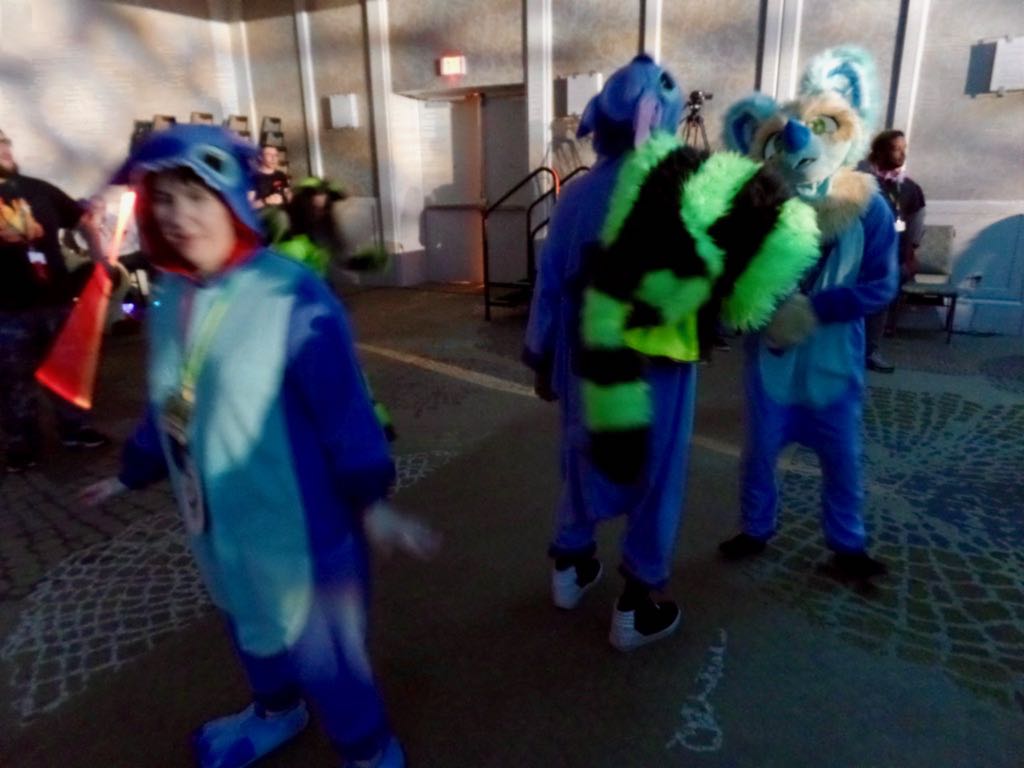 Trivia: The definition of the second, based on the transitions of the outer electron in a cesium atom, was set to approximate as best as possible the length the second was thought to have in 1955, when the first cesium clocks were built. Source: The Disappearing Spoon: And Other True Tales of Madness, Love, and the History of the World from the Periodic Table of the Elements, Sam Kean.

Currently Reading: And some more miscellaneous Harvey comic books yet. This was a huge box.

PS: Using my A to Z Archives: Commutative, an essay originally done by request.