In better circumstances this would have been our travel day, getting into Pittsburgh. If we had come from Kings Island in Cincinnati we likely would have driven through Columbus. Conceivably we might have stopped at the Columbus Zoo, to ride the antique carousel and the Sea Dragon roller coaster, and maybe some other rides. It would depend how MWS felt about this. He'd presumably have ridden Orion as his 100th roller coaster, so there wouldn't be the pressure to save that. But it is zoo admission prices for, for him, one ride of particular interest and then, mm, oh, a Himalaya. Probably we'd have just driven through, taking the advantage to sleep late in the morning and then have some free hours in the evening to gather with Michigan Pinball and probably have the first of about three trips to the taco place.

Knoebels has put in a mandatory-mask policy, kicking out people who aren't wearing some face protection. From reports, this has cratered their attendance, with barely anyone in attendance and barely anyone on rides. And sociopaths on Facebook saying they deserve it for ... wanting to reduce the chance someone dies for it. This, if it held up, would make Knoebels ironically another good park to visit: outstanding rides, an outdoor venue even for an amusement park, and nobody around? ... Cedar Point and Kings Island apparently are having similar well-if-you-want-to-risk-it small crowds.

Michigan's Adventure is not going to open its amusement park rides. It is opening the water park, though, with conditions. Now, I know that the water in these rides is chlorinated (or treated with something as good as chlorine) but ... jeez, I guess if it keeps them from losing too much money to operate at all? Still.

And here's the last hours of Motor City Furry Con 2019. What do you guess is next: amusement park, pinball, or furry con? 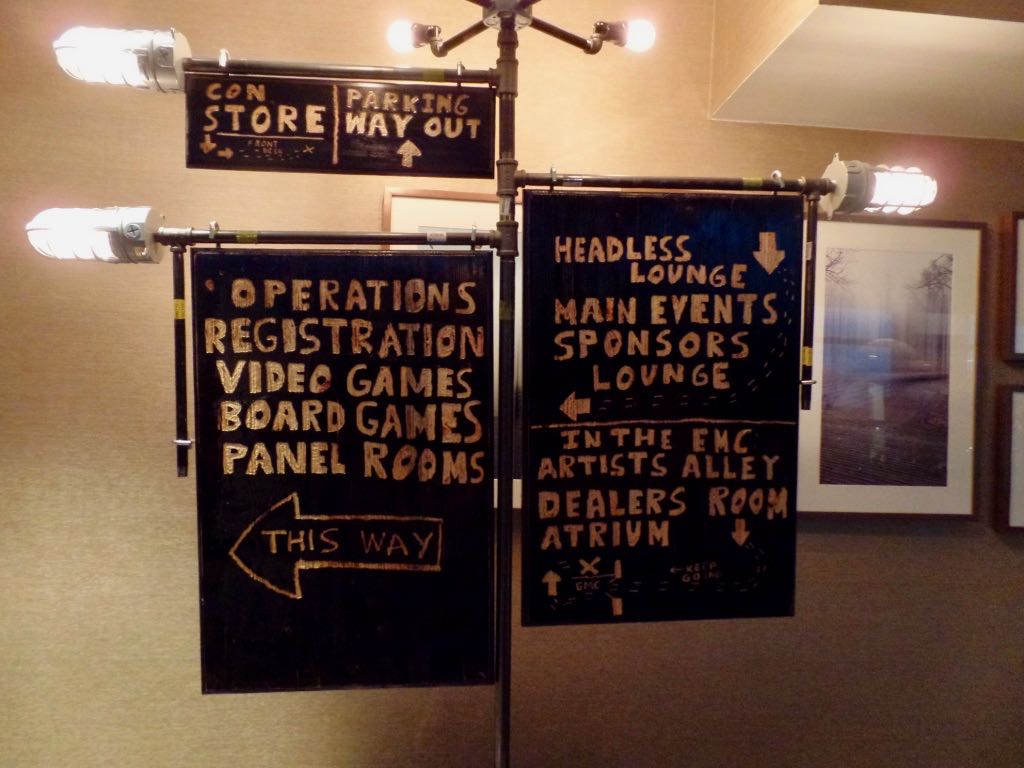 Some of the new signs Motor City Furry Con had to direct things, since the hotel had a lot more linear space as well as some rooms in some conference space semi-detached from this. 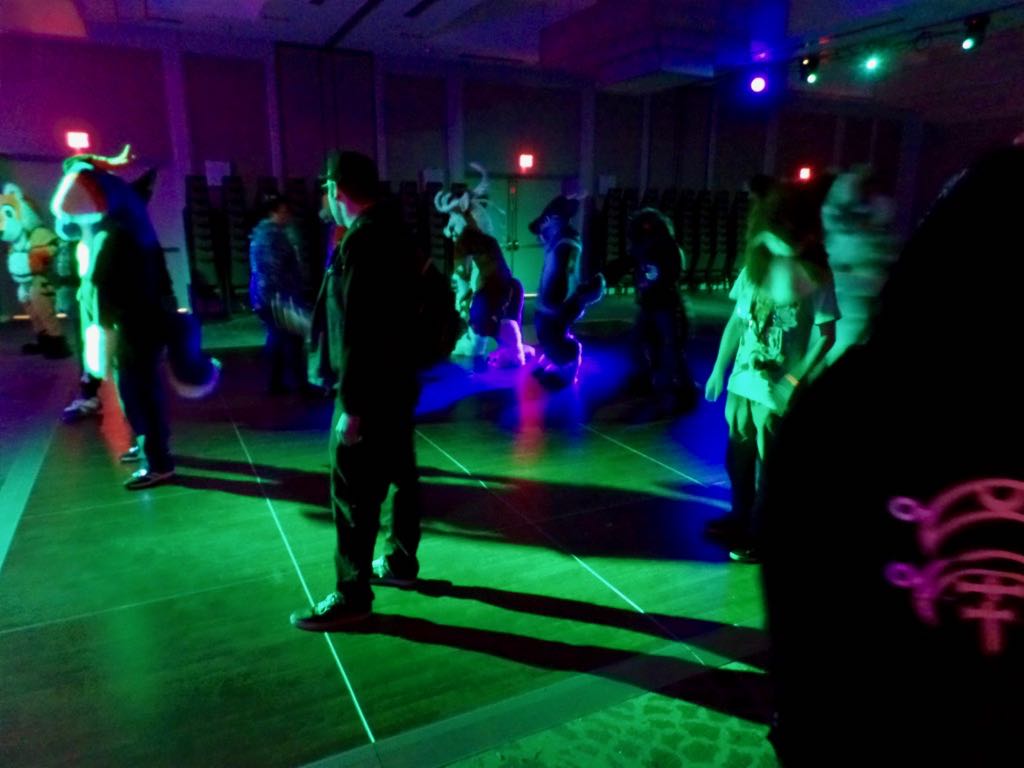 And we're dancing! There's always a bit of that to close out the convention. 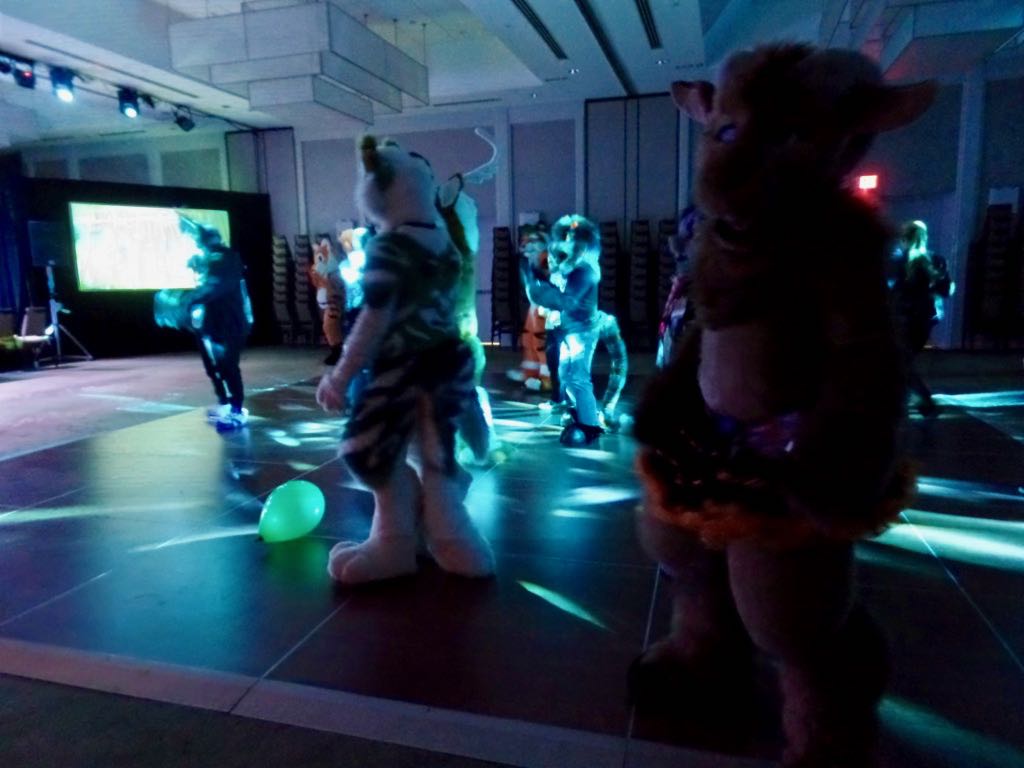 Someone's brought a balloon to make us worry that one of the fursuiters is going to step on a balloon. 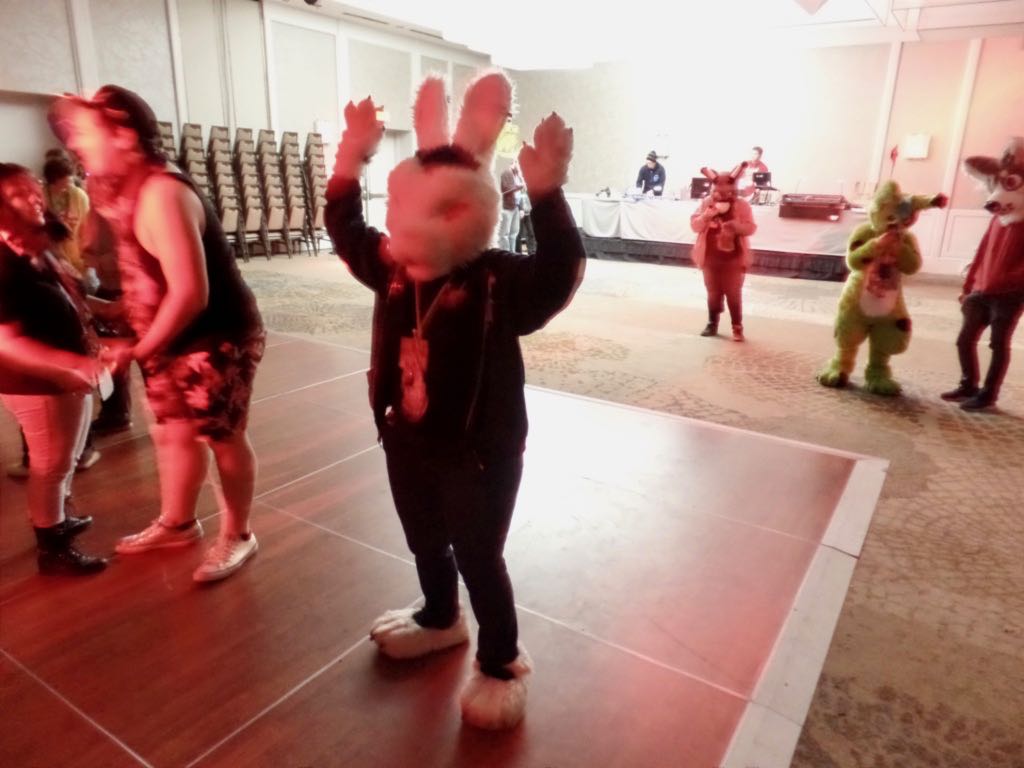 bunny_hugger being all cool with the explosion going on behind her. 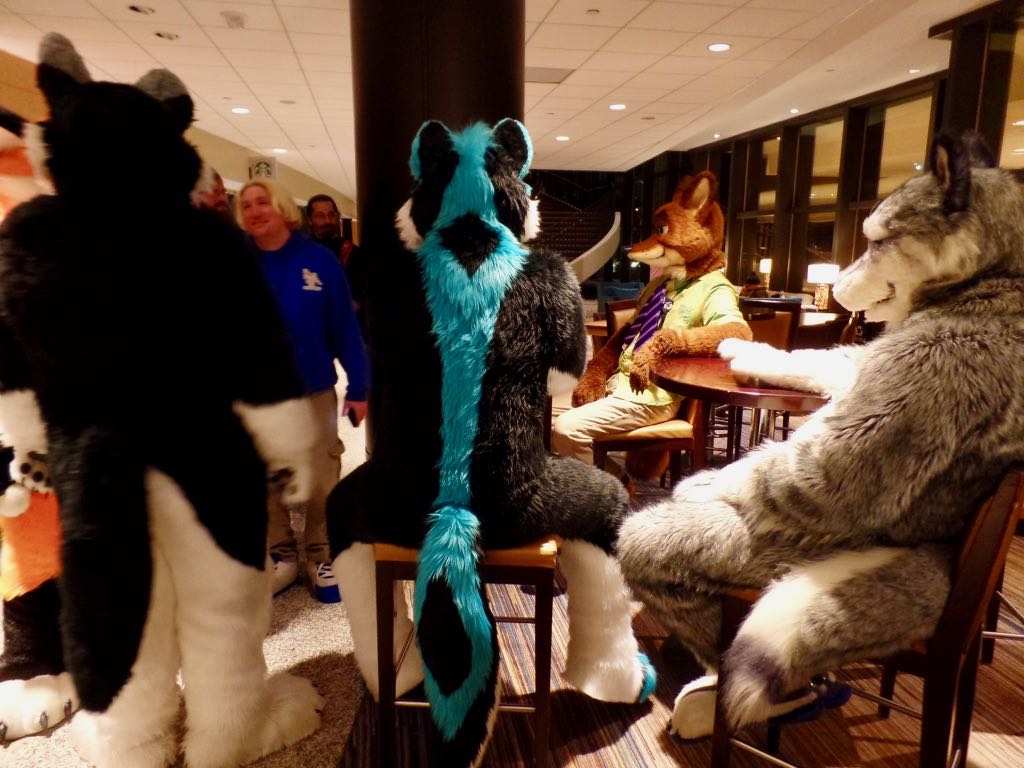 Fursuiters hanging around outside or possibly after the Dead Dog Dance. 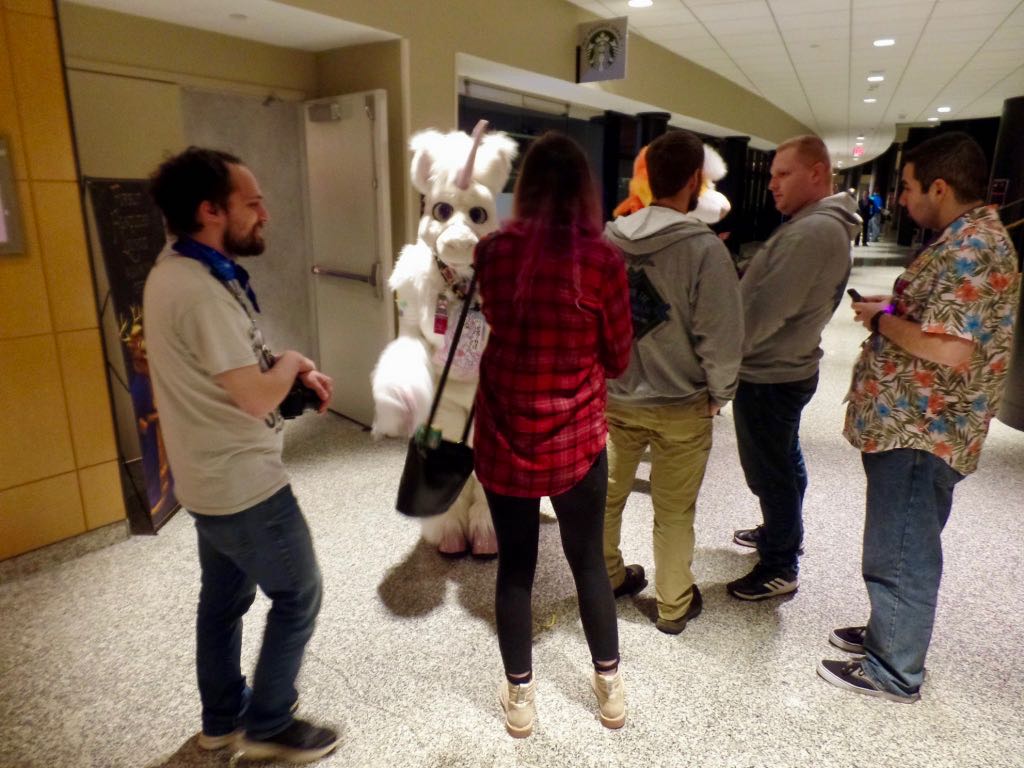 Folks gathered in the hallway in one of those little moments you see when nobody really wants to leave but there's nothing particular to stay for either. 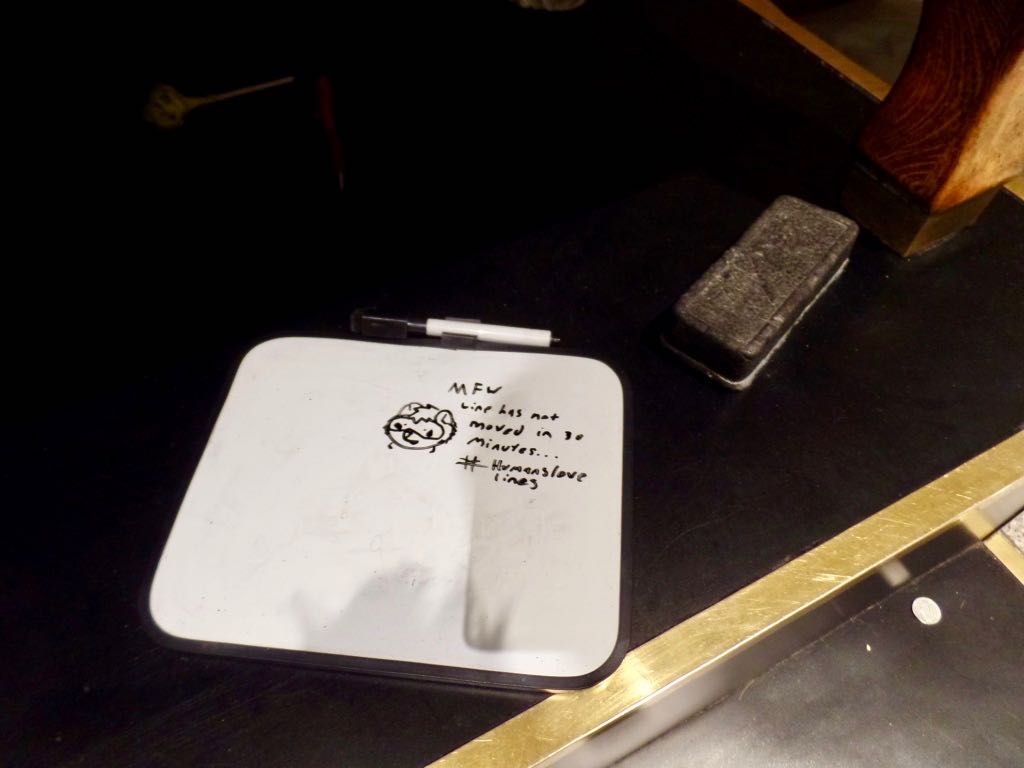 A complaint about a slow-moving line, although since this was found on a Sunday I'm not sure what the line would have been from. Maybe the ice cream social? 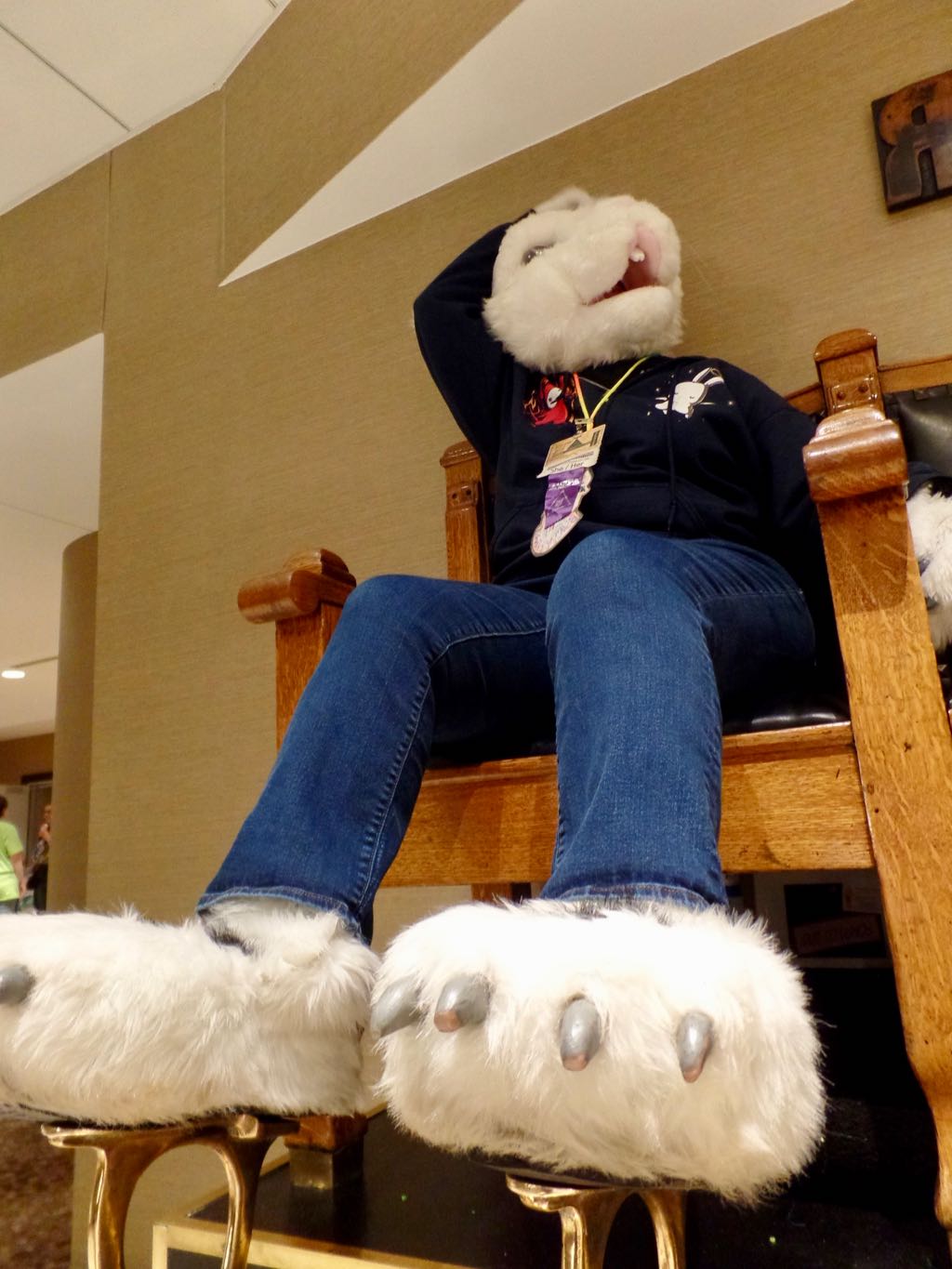 bunny_hugger using the shoe-shine stand as her throne. Bow to the bunny paw, everyone! 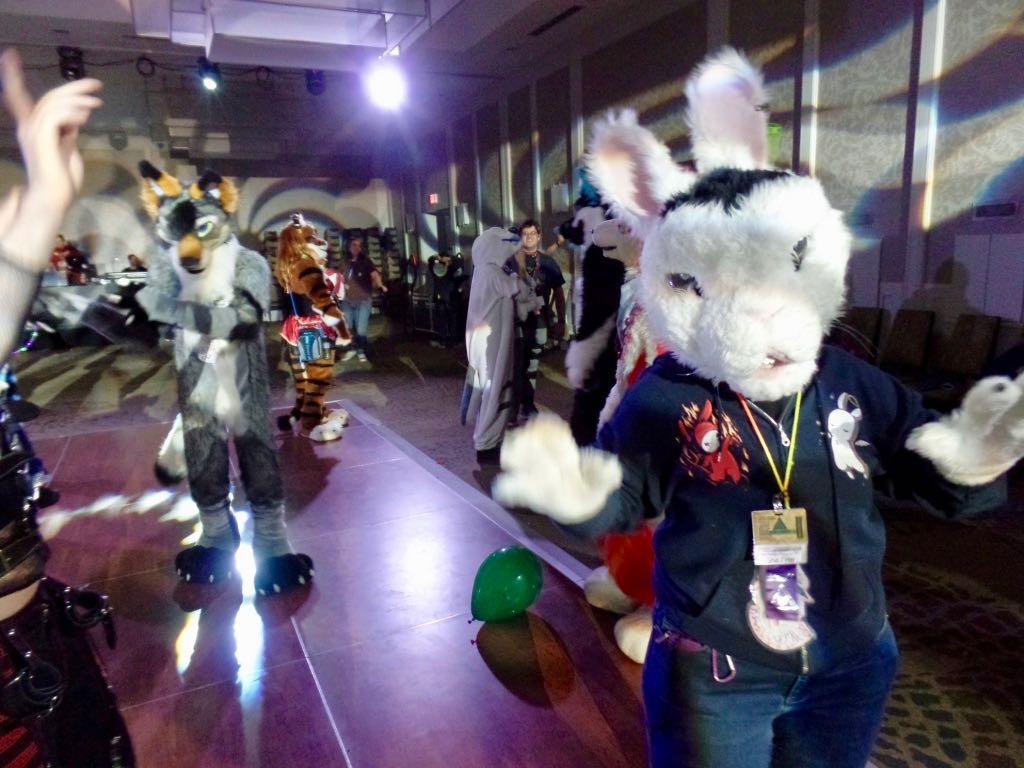 Ah, here we go. There's a bit more dance yet and I got a moment when the lighting was in my favor. 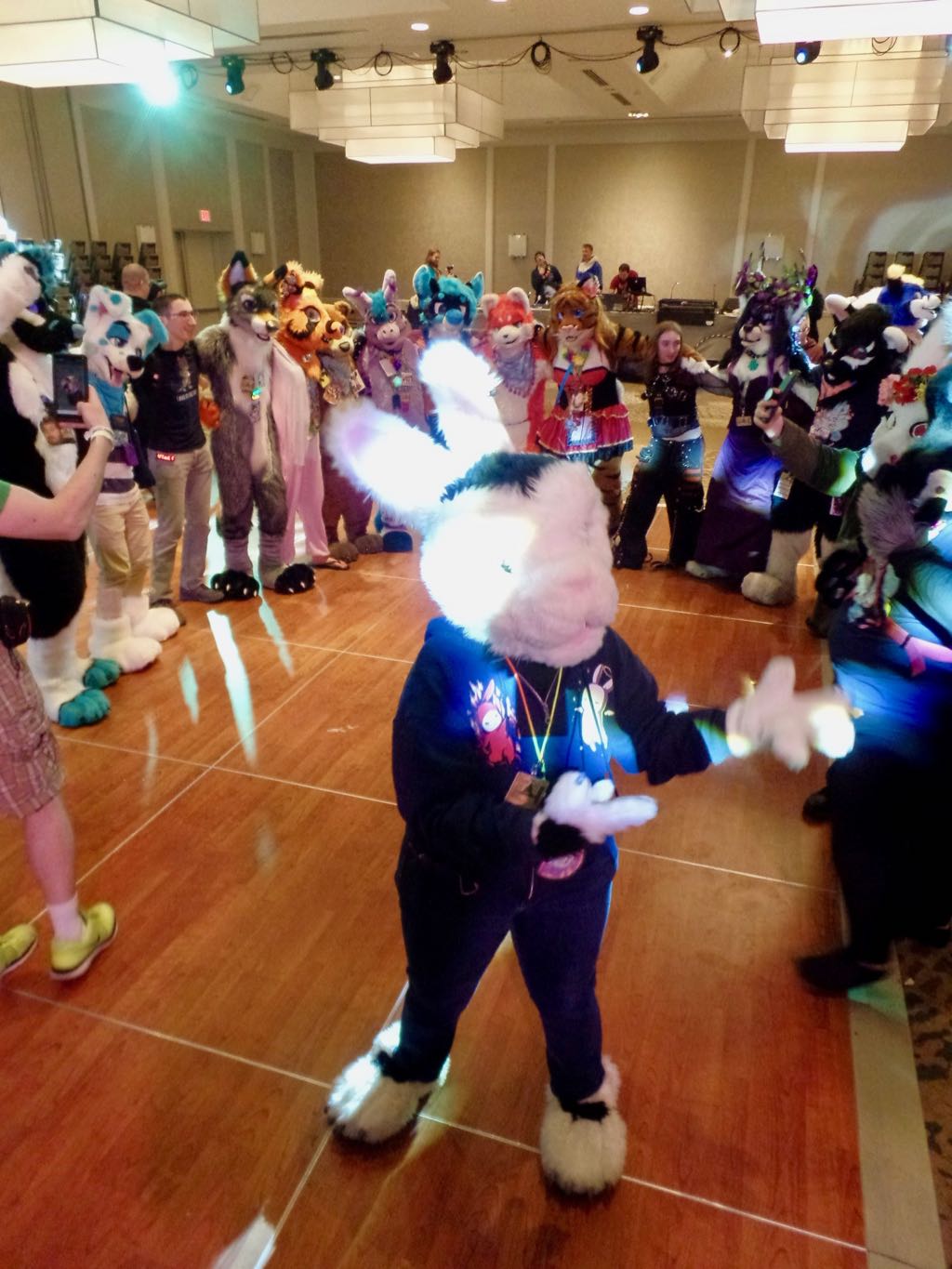 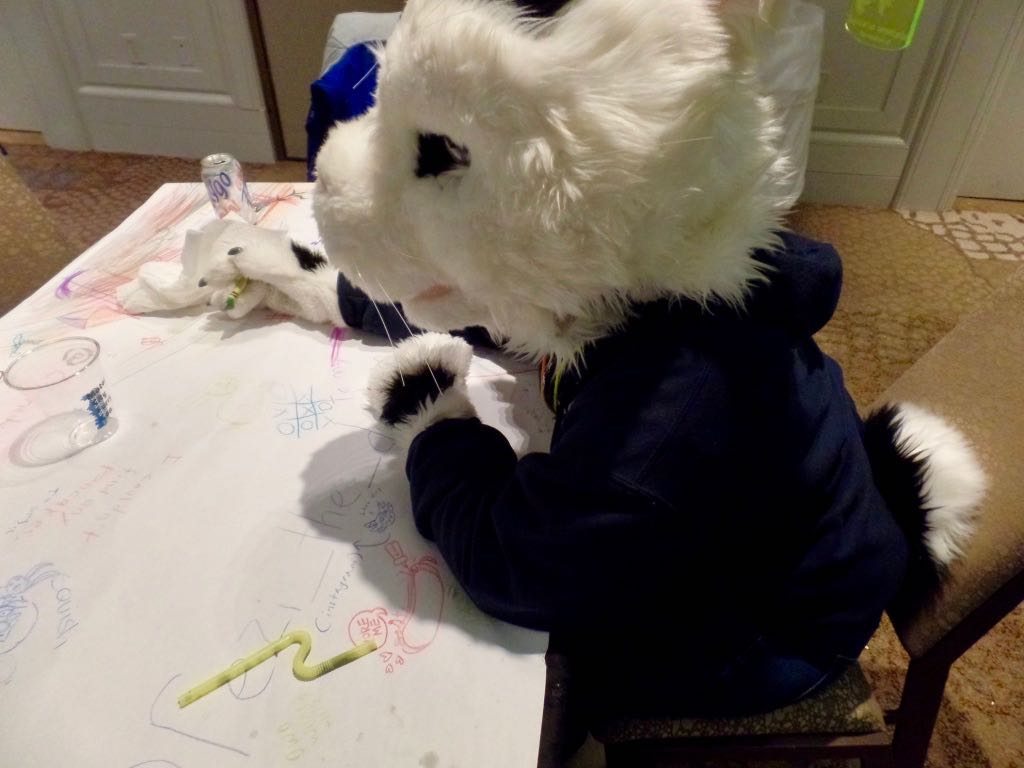 bunny_hugger gets a last doodle in on the Hospitality tables. 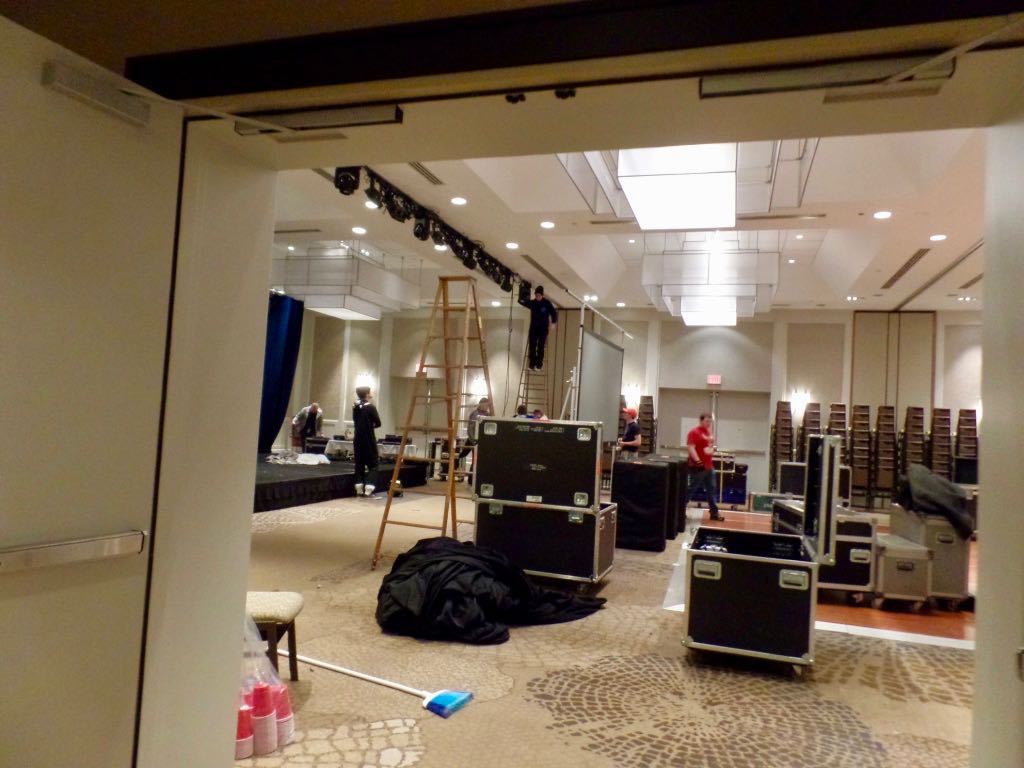 Now the dance is done, and the Main Events ballroom is getting cleaned up and turned back to its generically usable condition already.

Trivia: The 1939 World's Fair time capsule did not include a radio set, and certainly not a television. Source: Please Stand By: A Prehistory of Television, Michael Ritchie.

Currently Reading: Miscellaneous, mostly Harvey, comics again. You know, it's a little bit weird that a comic book aimed at fairly young kids just comes right out and calls him The Sad Sack when you remember what phrase that truncates.

PS: How June 2020 Taught Me How Many People Just Read Me For The Comics, a sobering moment as I shift to A-to-Z writing.