So when you can't get it all together, improvise

In better times, this would have been the second day of Pinburgh. Someone on Tiltforums posted a 'game banks' list for the tournament and people are using random number generators to simulate their days. What the heck; I can join the fun. Here's how I make out my simulated days. Game order is modern game, electromechanical, late-solid-state, early-solid-state, for the most part.

First round: bank 74. Cactus Canyon, Odds and Evens, Title Fight, and Seawitch. I like this. Odds and Evens looks like a mess but all the other games I know tolerably well. Seawitch is a particular favorite so I'm sure to faceplant on that.

Third round: bank 50. Airborne, Mini Zag, Road Show, and Power Play. Apart from Road Show these are all games that have crushed me in earlier Pinburghs. Airborne is a weird quirky Capcom game from the mid-90s so literally anything could happen on that, including one or more of my competitors turning into a werewolf.

Fourth round: bank 38. Walking Dead, Hi-Lo Ace, Class of 1812, and Incredible Hulk. Hi-Lo Ace is a mystery to me but I like the layout. I love Class of 1812, as everyone does, so I would go in expecting disaster and emerge ... ooh. Who knows?

Fifth round: bank 32. Tron Legacy, Gay 90s, Dr Dude, and Seawitch. A different Seawitch from before. Another bank where I like everything on it. I've been playing virtual Dr Dude and getting to know the rules and also some nice easy repeatable normally safe shots, so that should send me up in flames very nicely.

Could I reach 30-30 on this set? ... I certainly know the rules well enough on enough of these games to. If I could find the plunge on Title Fight that would probably be a solid bet. Two Seawitches is a gift to me and I'd hope I could carry it out. I expect I end in D Division, though I might earn it rather than be restricted into it.

Sixth round: bank 54. Terminator 3, Star Pool, Terminator 2, and Nitro Groundshaker. Now that I know Terminator 3's RPG shot is a sure five million points, rather than ``disabled'', I feel good about my chances there.

Seventh round: bank 72. Batman The Dark Knight, 300, Gladiators, and Dracula. What would keep me from a perfect failure round here is that everybody else would be in the same desperate straits I am. 300 is a fun bowling game, though, and if it's set up like last year, it's a tilt monster, so I like my chances there.

Eighth round: bank 25. Terminator 3, Hot Tip, Dr Dude, and Cyclopes. Different instances of Terminator 3 and Dr Dude, but still. This is a bank designed as a gift to me; Hot Tip I've played at PAT's and at RLM's facility so don't feel lost there. Cyclopes I play at MJS's pole barn all the time and the ugly art might scare off everyone else. This will be the bank I hate myself for not doing better on.

Ninth round: bank 37. Shrek, Time Zone, Big Guns, Frontier. This will be an average bank for performance, but I'll have a great time playing it.

Tenth round: bank 51. Independence Day, Derby Day, Jokerz, and Pinball Lizard. Well, the last two I've played before. Independence Day is a mid-90s Sega game so that'll be a disaster, albeit with an automatic multiball last ball that won't help.

For my photo dump today? ... Uh ... how about pinball tournament stuff? Pictures from the first day of Pinball At The Zoo 2019. Pinball At The Zoo 2020 is still officially on the schedule, for the first weekend in October, but ... I notice the Cleveland Pinball Show, set September 10-13, just cancelled and that's feeling like a harbinger. It feels to me that if PatZ 2020 can't be held, then the whole state championship series for the year is off, too. That's just my feelings, though, not those of anyone with actual knowledge of anything. 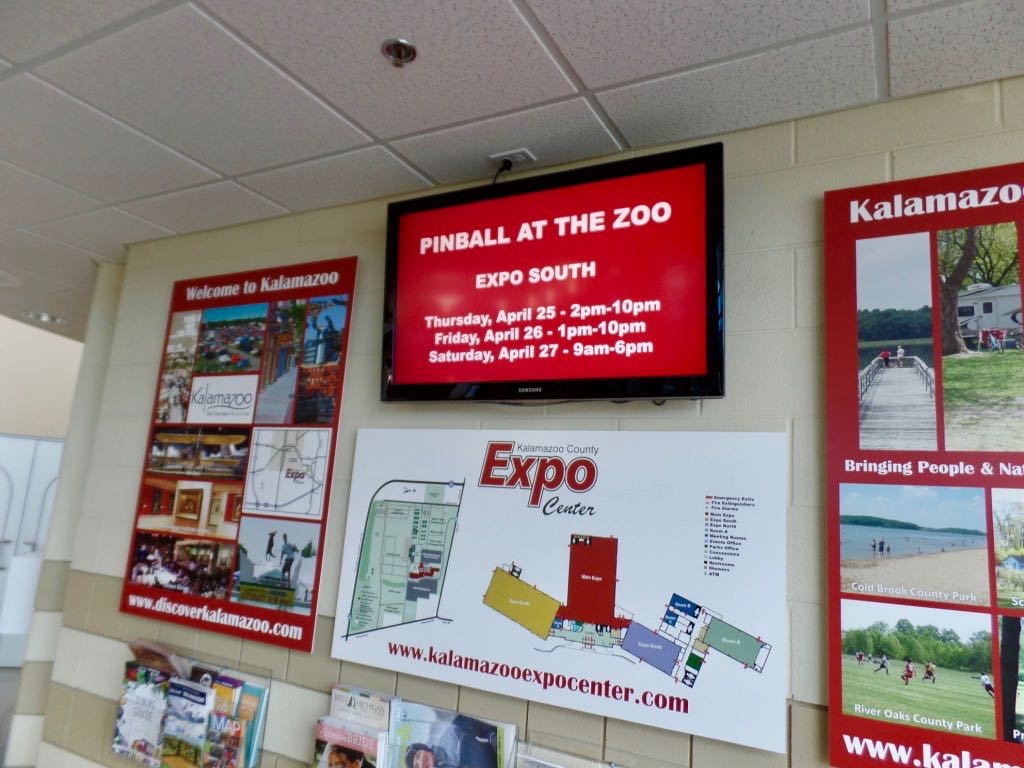 Pinball players being welcomed to the Kalamazoo County Expo Center. 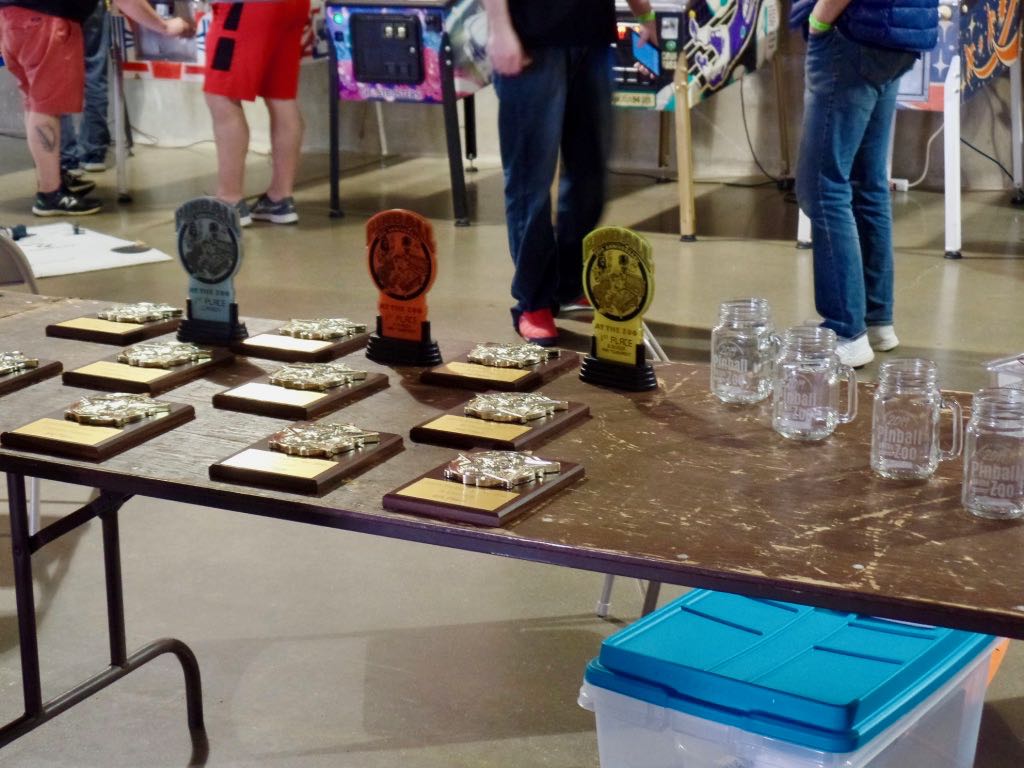 Trophies! For the whole tournament, for B Division, and daily and other side tournaments. Guess which one I took home! That's right, it's 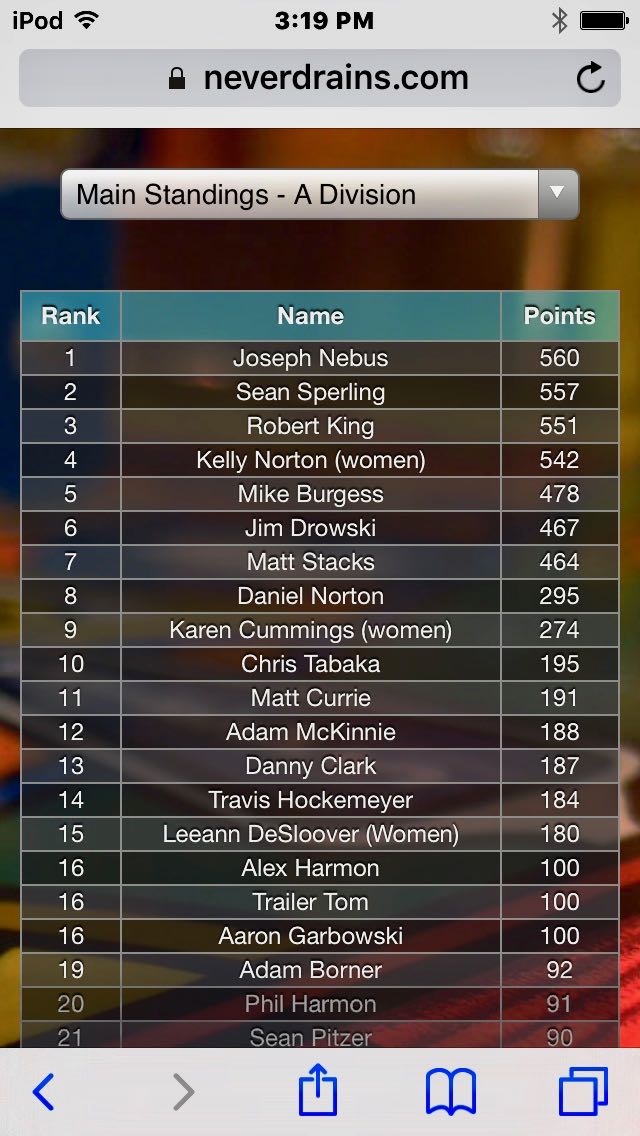 Photograph of the standings from that brief time when I was the top-ranked player at Pinball At The Zoo. This time would be 3:19 pm, the first day, eighty minutes after the competition opened, and when only three other people had played the six-game minimum to complete a full scorecard. Still, I was there! 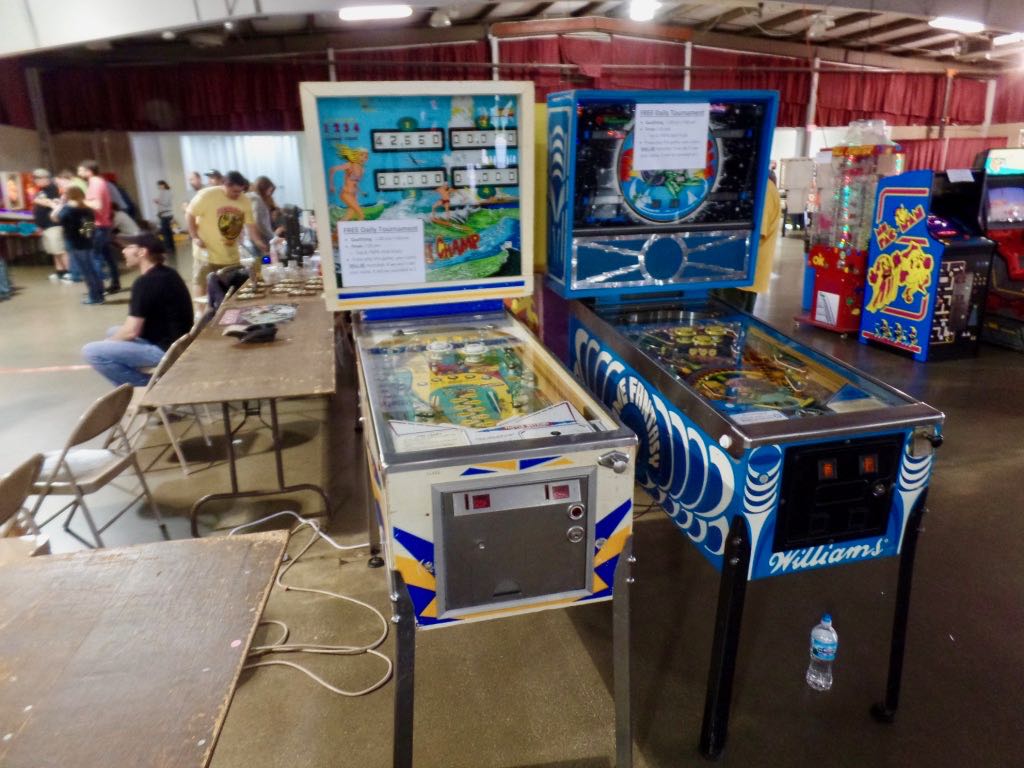 Surf Champ and Time Fantasy, games from Fremont that always whomped me and that were the daily tournament games for Thursday. I would, later in the year, get to be okay in them, but not that day. 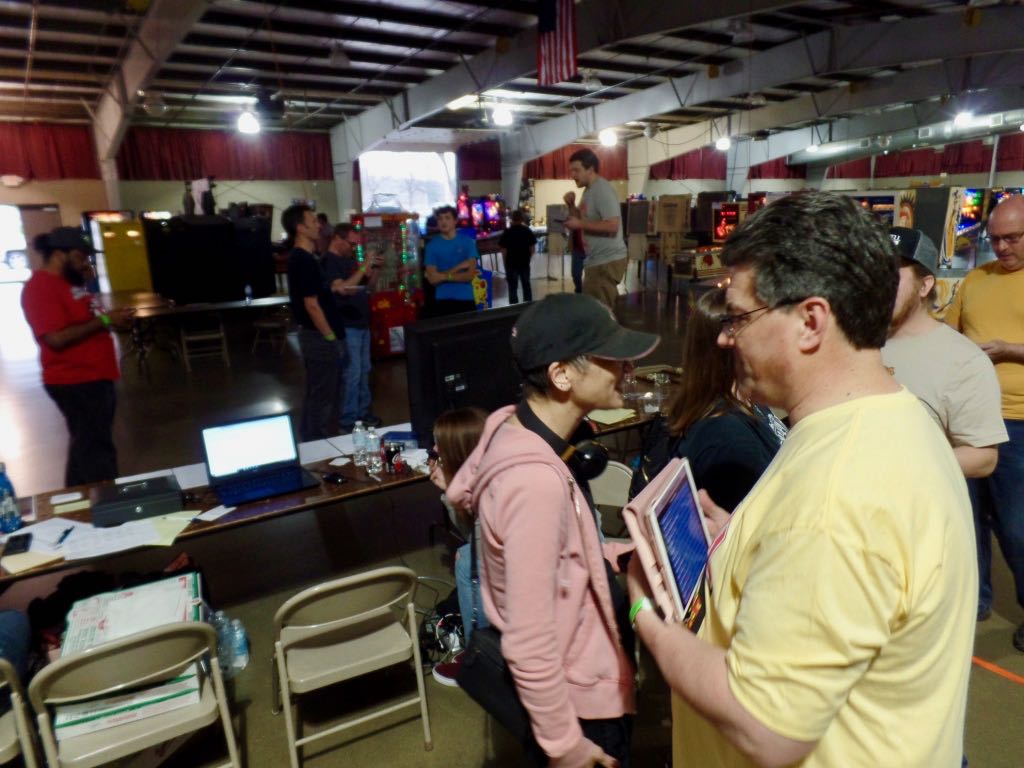 Gathering instructions for the Thursday daily tournament. Since Pinball At The Zoo was a circuit event it drew a lot of high-power players from outside the state that we Michiganders couldn't really compete with. But --- everyone realized --- the daily tournaments were, because of how they were set up, worth almost as much as a good finish in the main tournament would be, and required a less big streak of good play so ... everybody crushed onto those games instead. 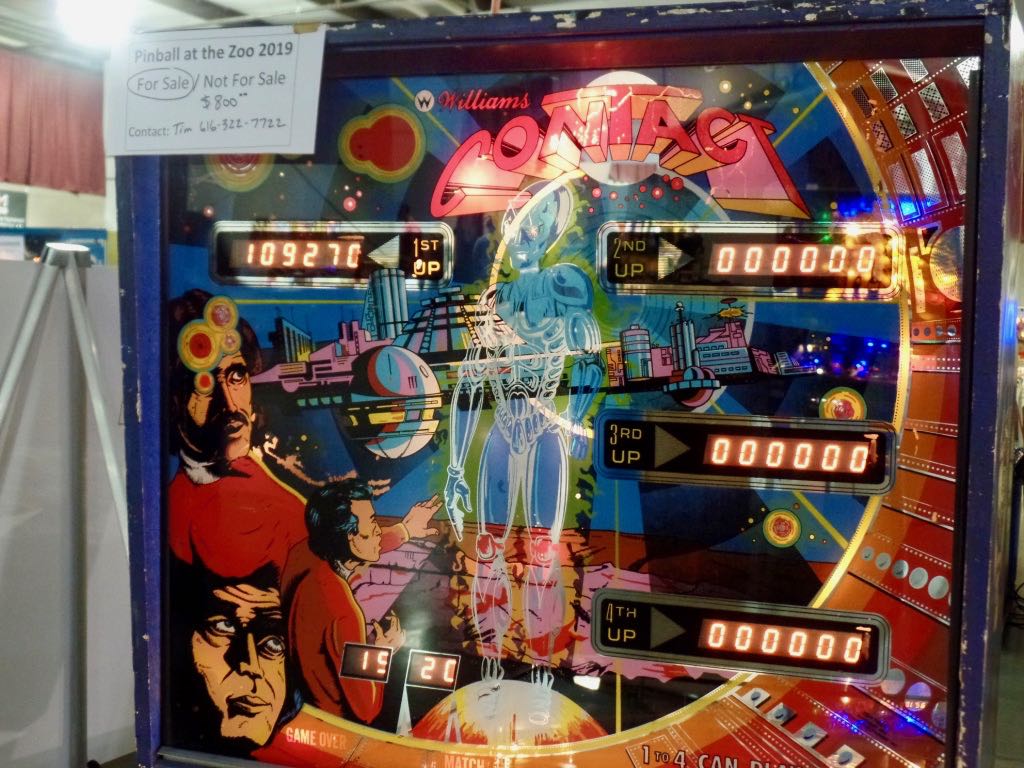 I like the ghost alien robot theme of this Williams Contact. I remember nothing of what the game was like. Not a tournament game, just one on display. 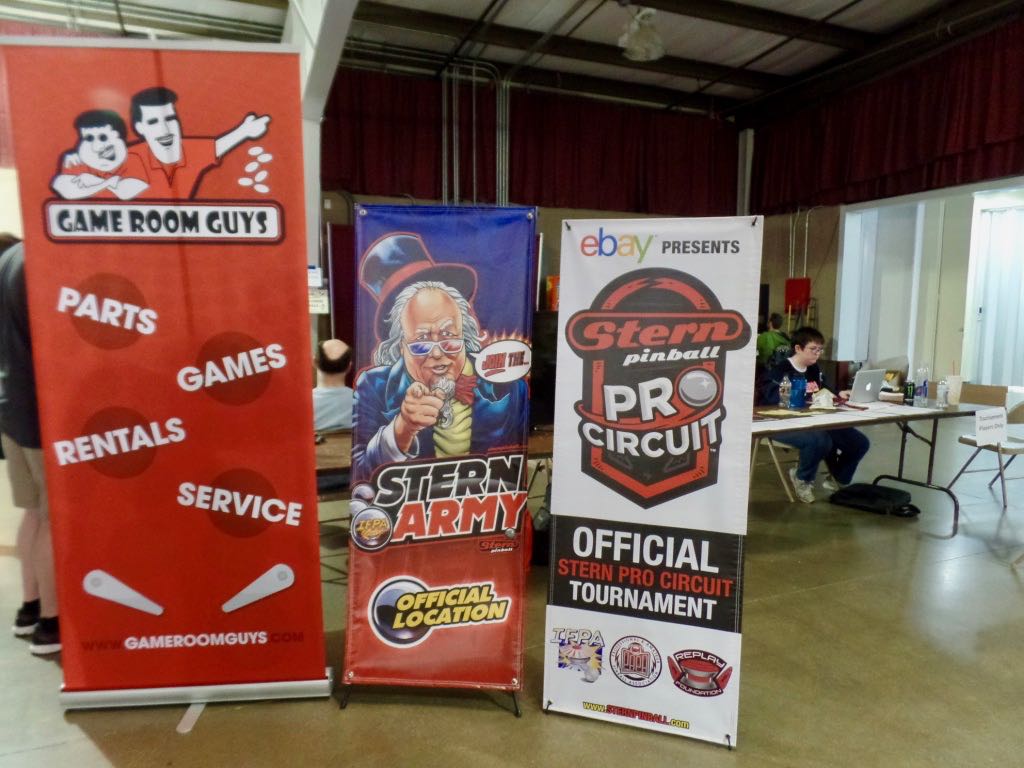 In the heritage of ``Krystal can't enjoy her sandwich'', here's ``

bunny_hugger can't enjoy her pinball tournament'', because she had student exams that needed grading that weekend and the only thing to do was work on them in free time and hope nothing got lost, including her laptop. 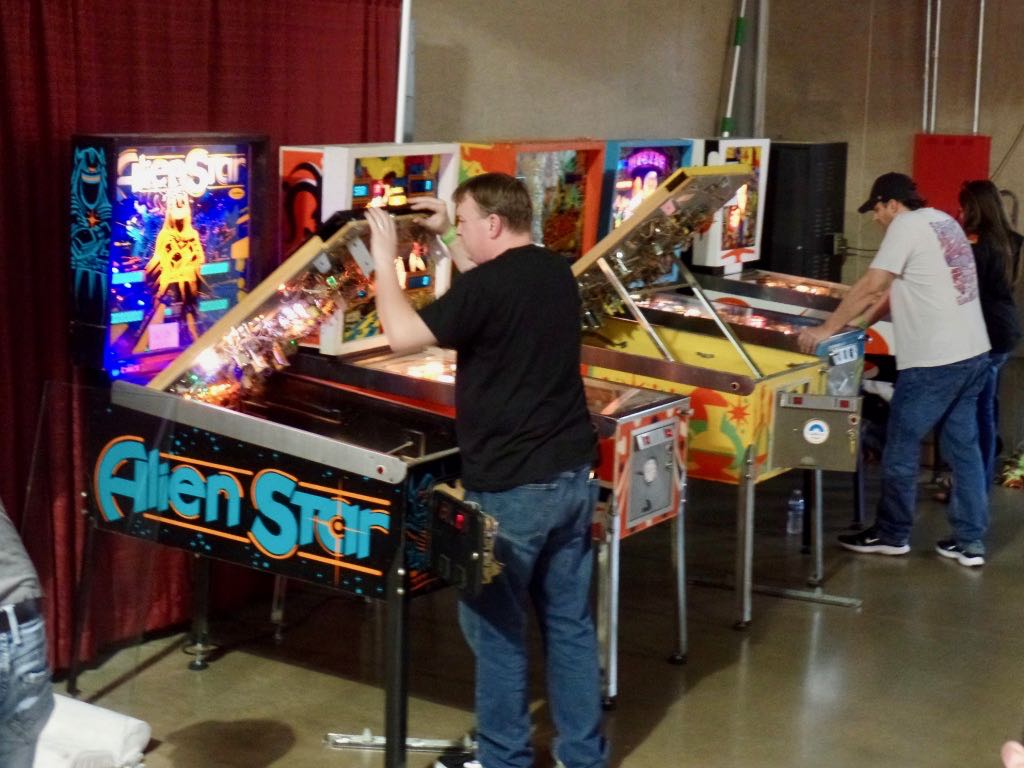 Alien Star and Genie being taken in for their 10,000,000-point routine servicing and oil changes. 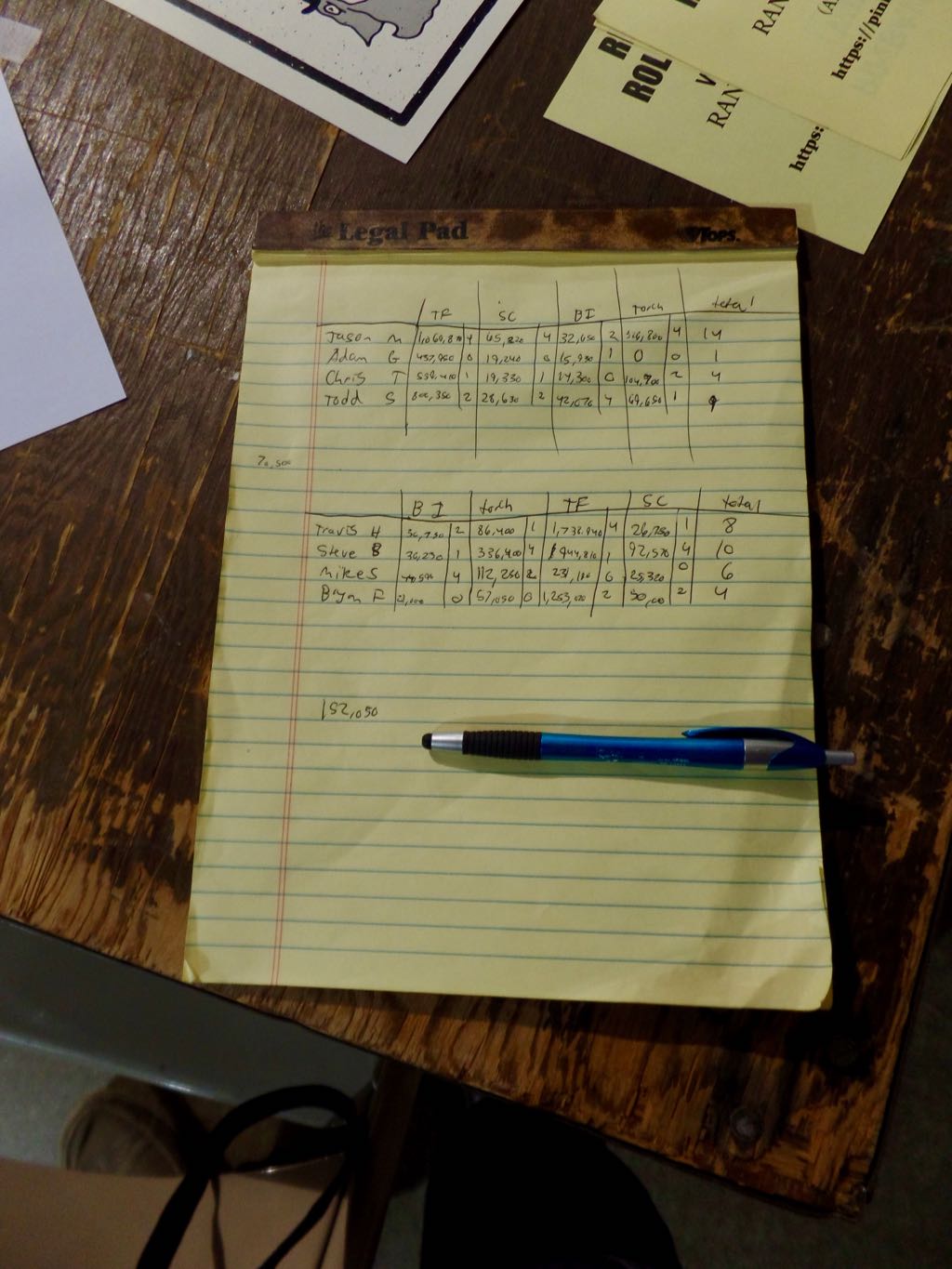 Scoring sheet recording the first round of the daily tournament, in which eight players all competed on four games. The top two in each group went on to the final round, another set of four games, four players. This format, combined with the high rating of the participants, is why the daily tournament was worth so much to play. The scoring is PAPA-style: first place finisher gets four points, second place two points, third place one point, fourth place zero points. So if one person is claiming all the first-place finishes like Jason M did in the top group, you can get through with a pretty average performance. And as Travis H did in the second group, you can get through just by not ever coming in last. It's a great scoring system if you can't reliably play great. 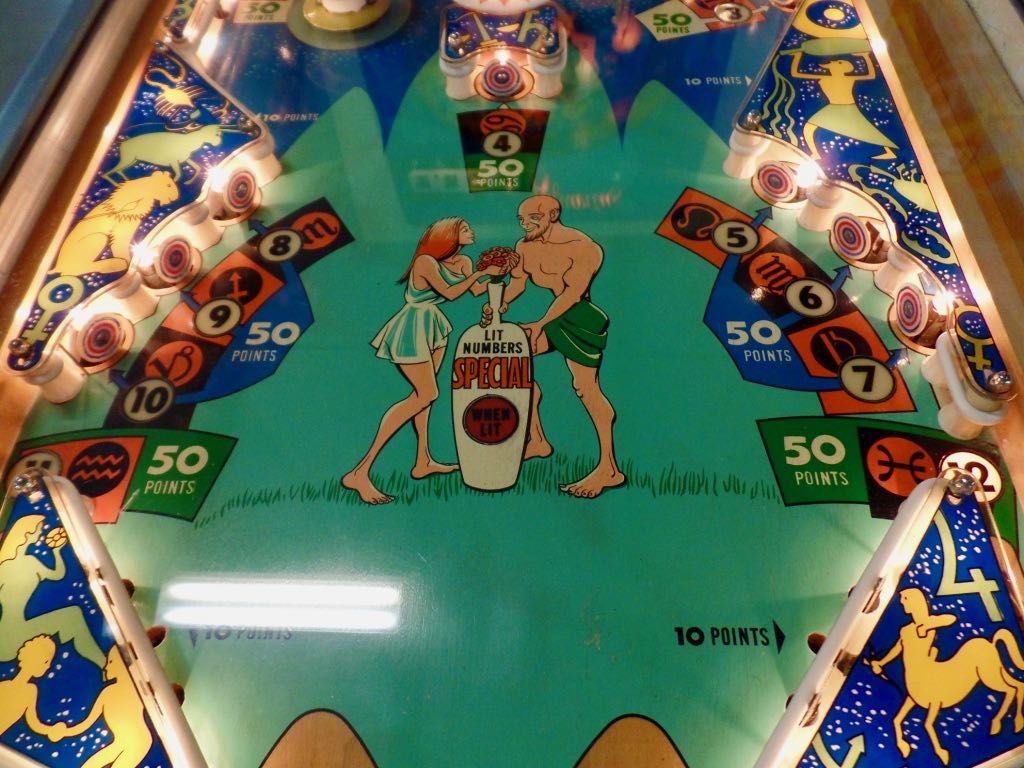 Playfield for Aquarius, a Gottleib electromechanical that was in the main tournament and that I enjoyed, and that moved to Fremont where a scoring reel got intermittently sticky, so it's always ruled out of tournaments. Shame; it's a fun theme and a pleasant playfield. 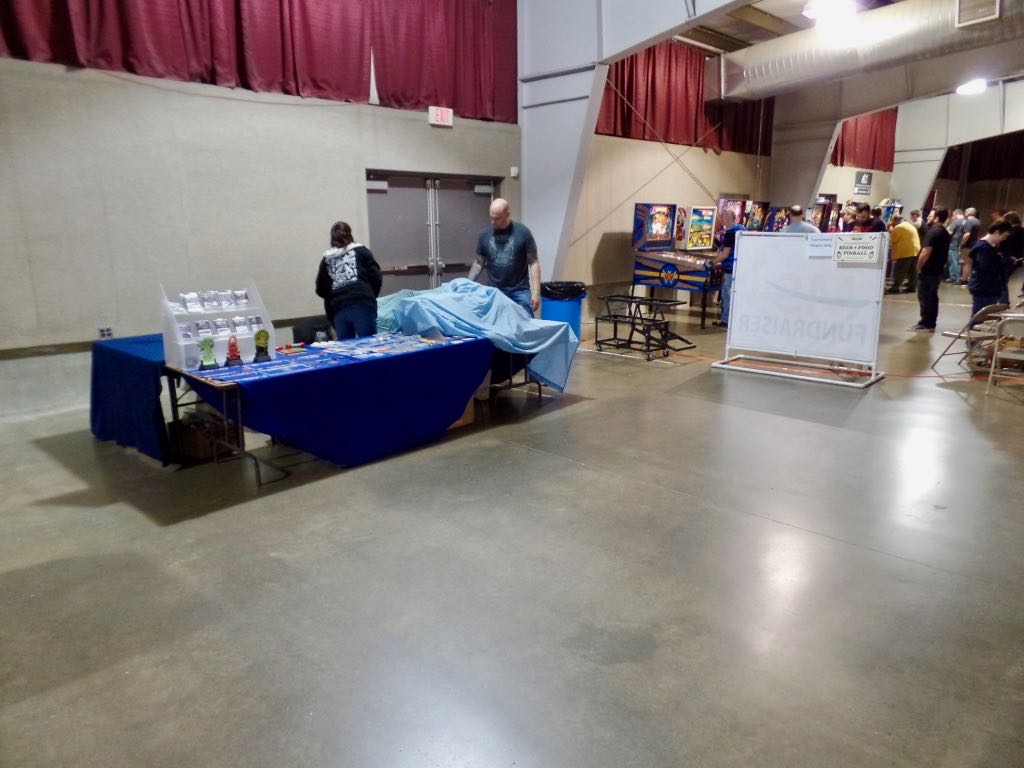 Tucking in the convention for Thursday night. 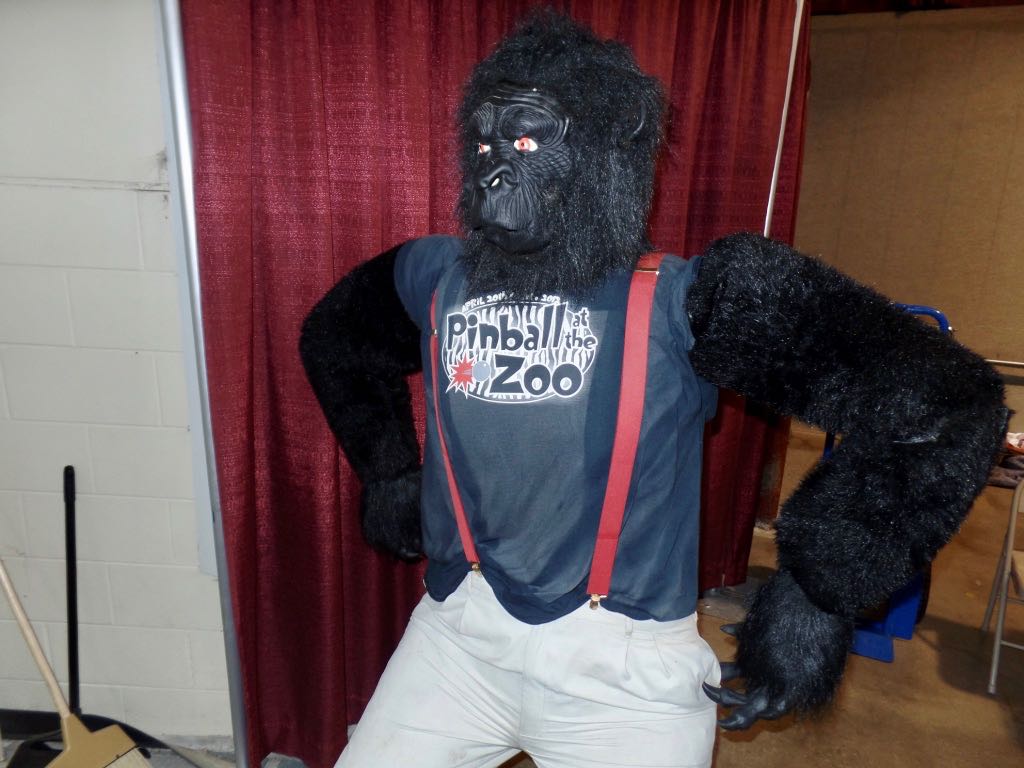 Little picture of the gorilla at the main entrance, a PatZ in-joke I'm not fully in on. I would have sworn they've worn a nametag in past years but I can't find a photograph showing it, or what their name is. There's a gorilla reliably on the PatZ logos, though those usually include other animals too. s 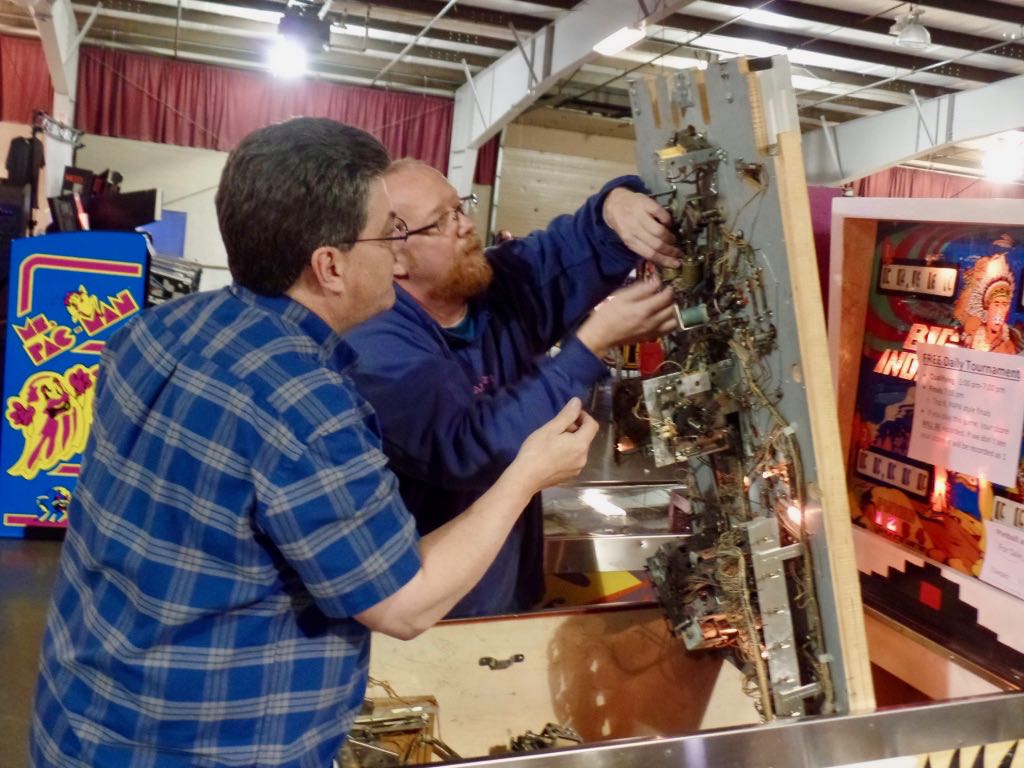 Friday! When we revisited the place for a couple hours to try brushing up our scores. (

bunny_hugger had classes so we only had a short window of the day when we could have gone. Arguably this was a bad use of our time, but, as it happened,

bunny_hugger did get into the B Division of the main tournament, partly from her play that short day.) Anyway, here some repairs get done on Big Indian, one of the daily-tournament electromechanicals. 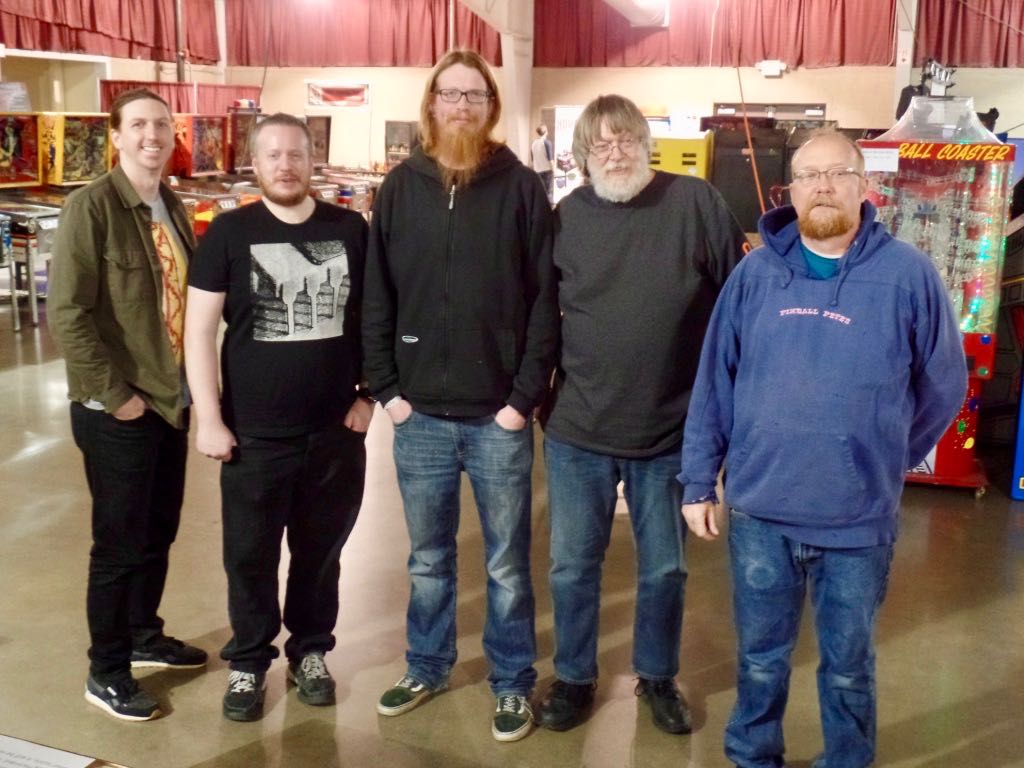 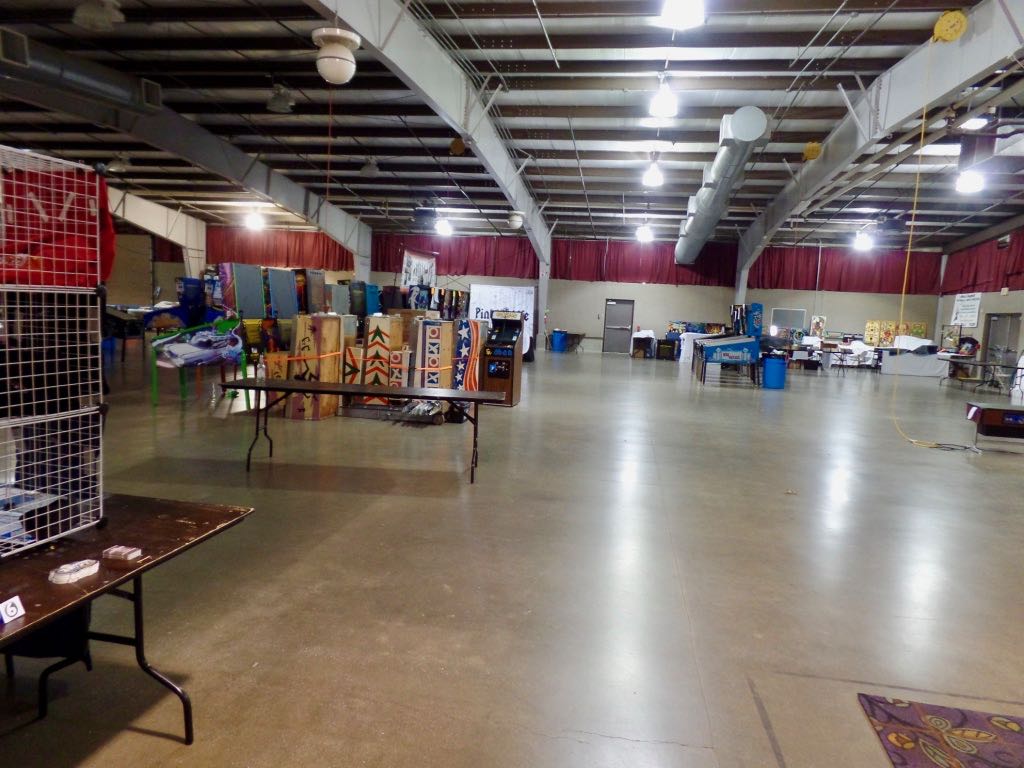 And here's PatZ being tucked away for the night again.

Trivia: Saturn's moon Titan had a diameter estimated at 4,160 kilometers before the Voyager missions. Afterward it was estimated at 5,150. Source: Mission to Saturn: Cassini and the Huygens Probe, David M Harland. (It's today estimated at 5149.46 kilometers.)

Currently Reading: Well, gosh, it's the end of that batch of comic books. Honestly was not sure I'd ever see it.