'Cause even a miracle needs a hand

Nintendo has still not called back.

My mathematics blog: what's it doing? It's had slightly more than usual this week, partly by power of asking for stuff. Run recently have been:

Meanwhile, in the cartoons I look at 60s Popeye: Uranium on the Cranium, because Popeye cartoons are where you say things like 'cranium'. What did I think of the episode? Well, the subject line takes a long while to say not much, so that's a hint.

And now let's close out our May 2019 visit to Cedar Point, and what we had hoped would be a new tradition of very early-season visits to amusement parks. 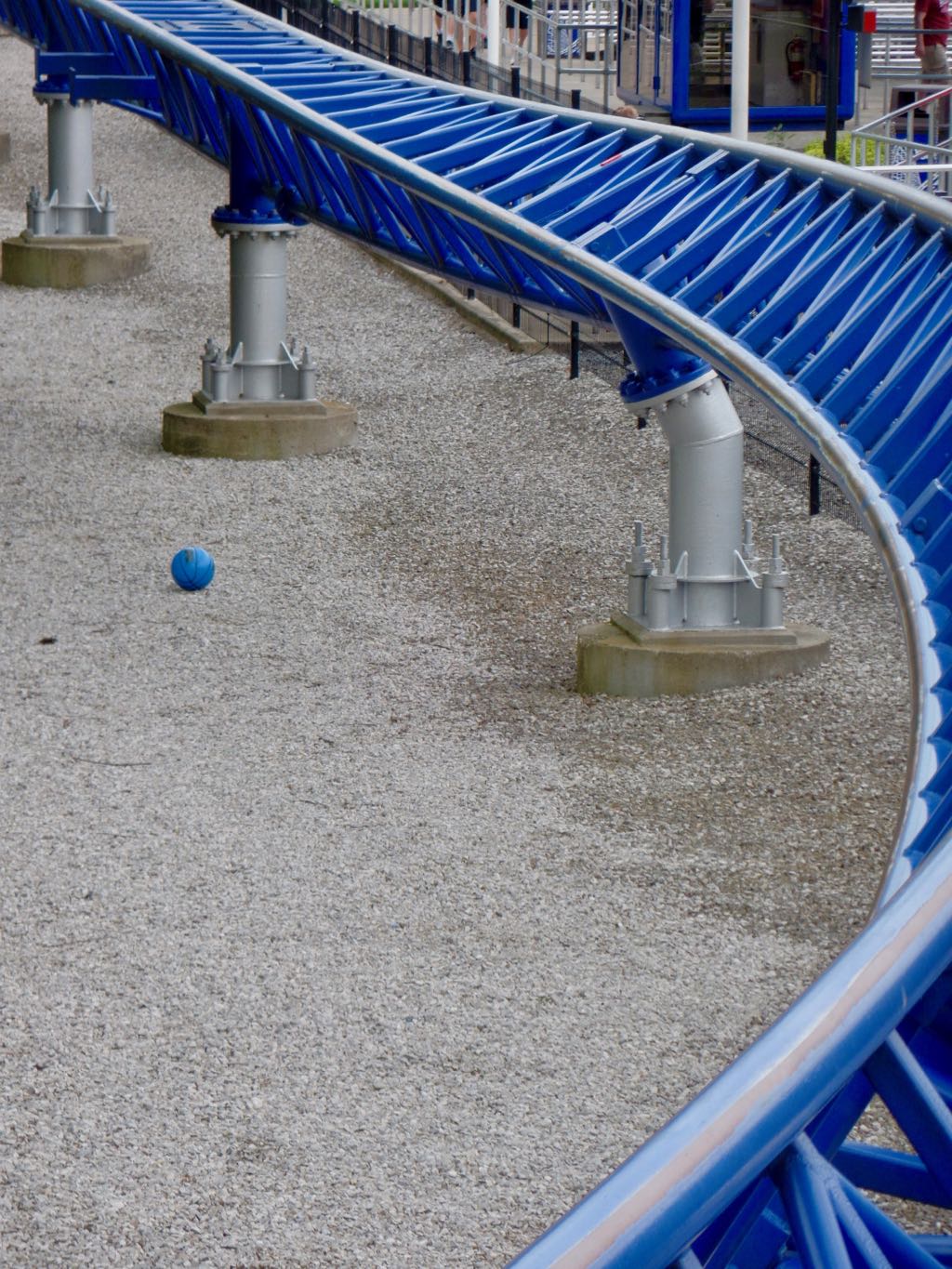 Someone's inflatable ball on the infield of Millennium Force, where it passes back by the station and swings around again. Please tell me why this is so funny. 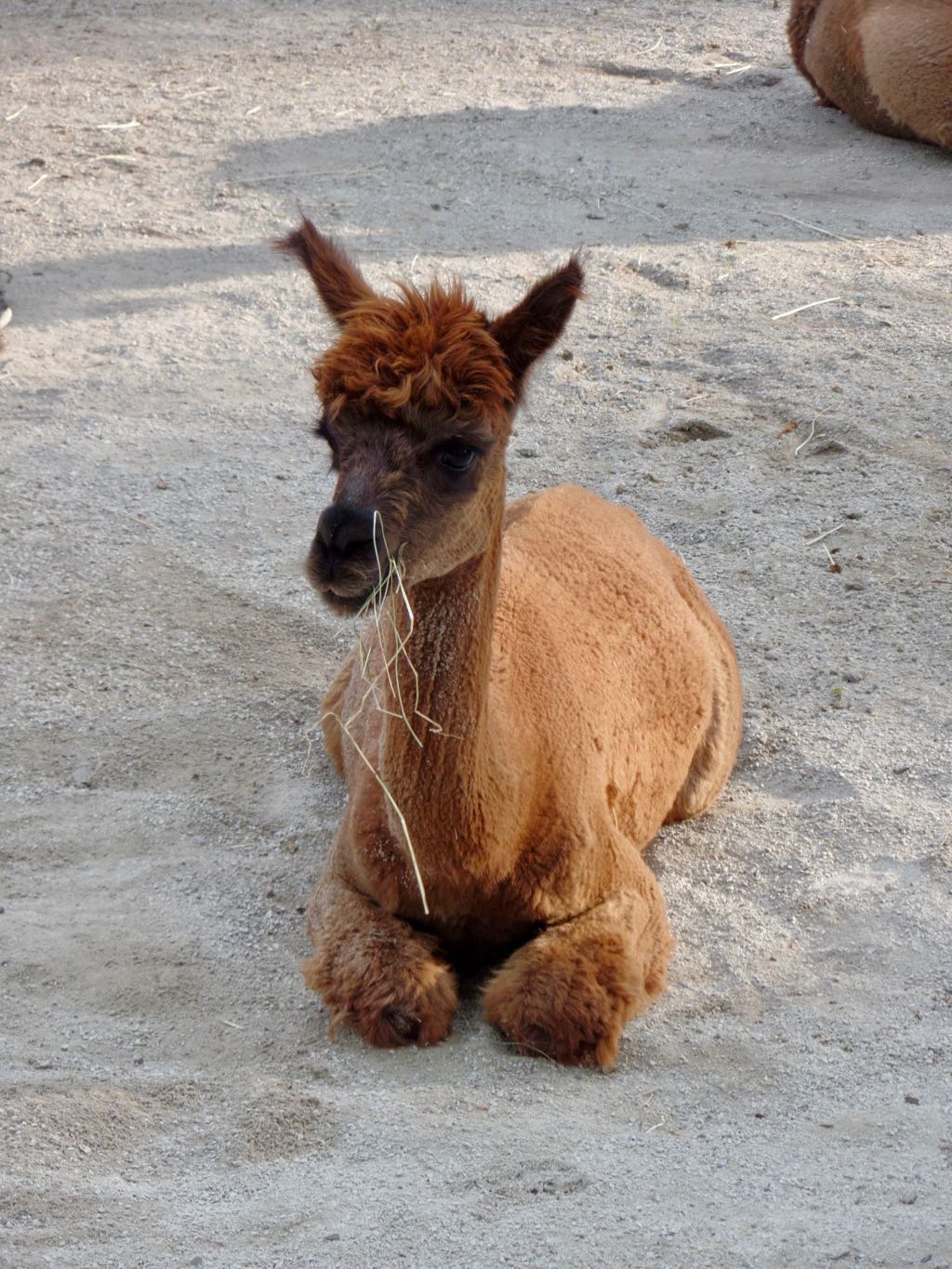 A llama at the petting zoo, part of the exhibit at the start of Frontier Town, where it shows how 19th-century Ohio farmers had llamas and stuff which they totally did. 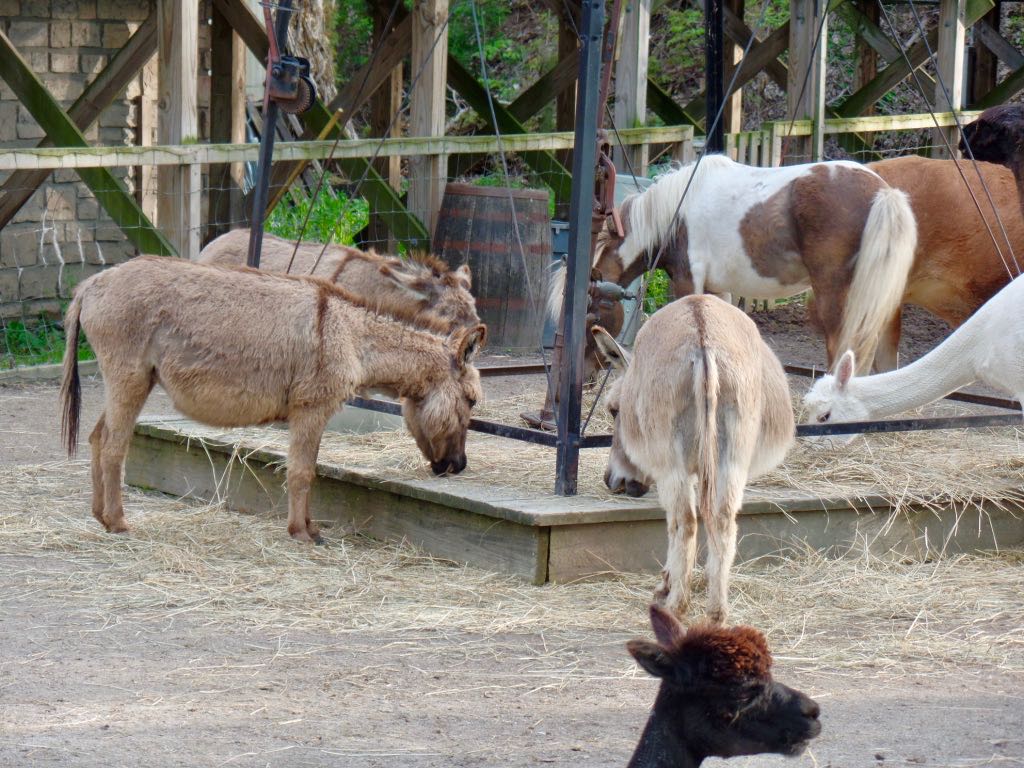 Some more Ohio hoofed animals with maybe more historical authenticity to them. 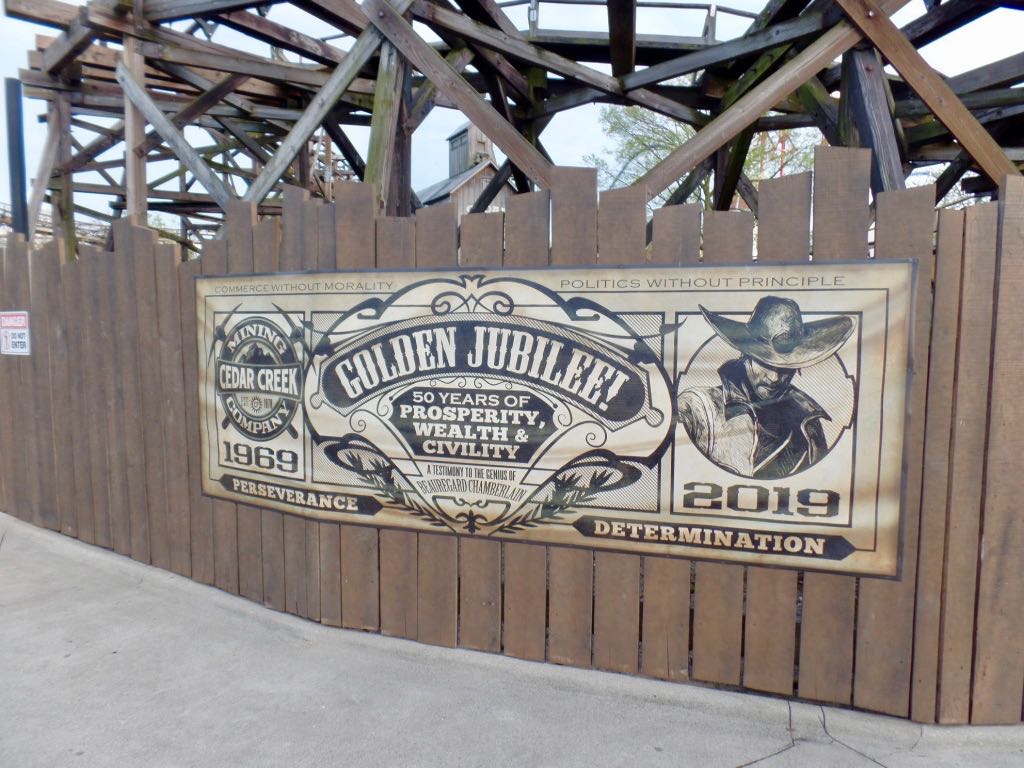 2019 was the 50th anniversary year for Cedar Creek Mine Ride and it got some extra decorations to celebrate and tie it in better to the Frontier Town area. 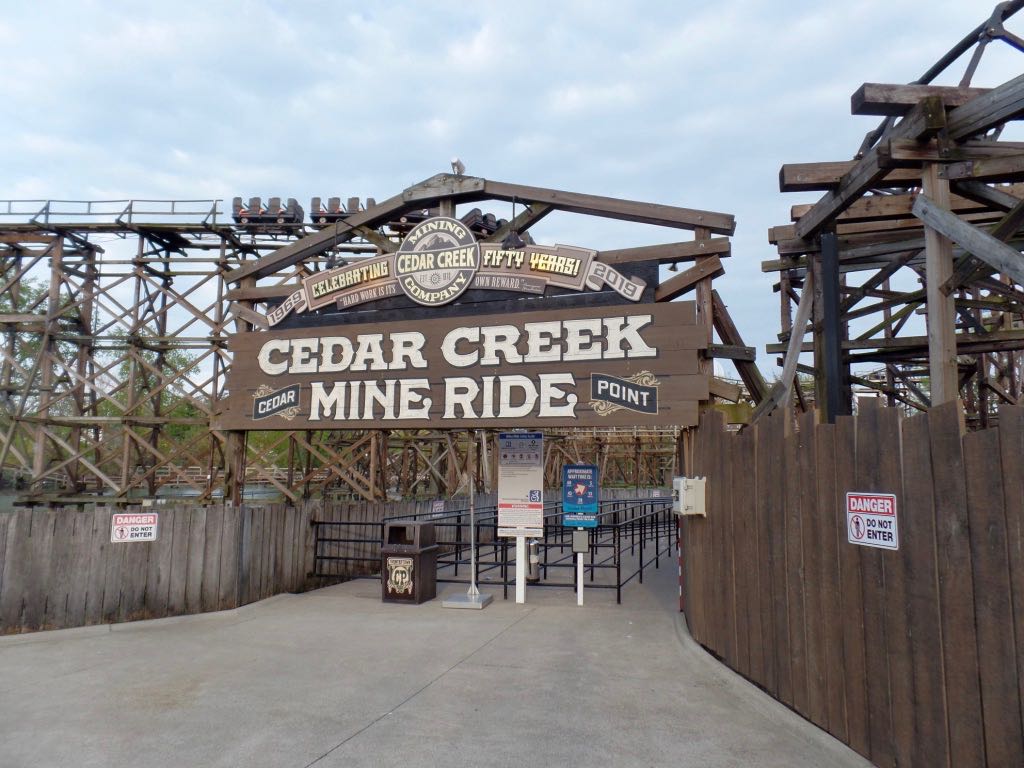 Cedar Creek Mine Ride got a new front sign that looks old-fashioned in a different way for 2019. Note the test train going around the track, too. 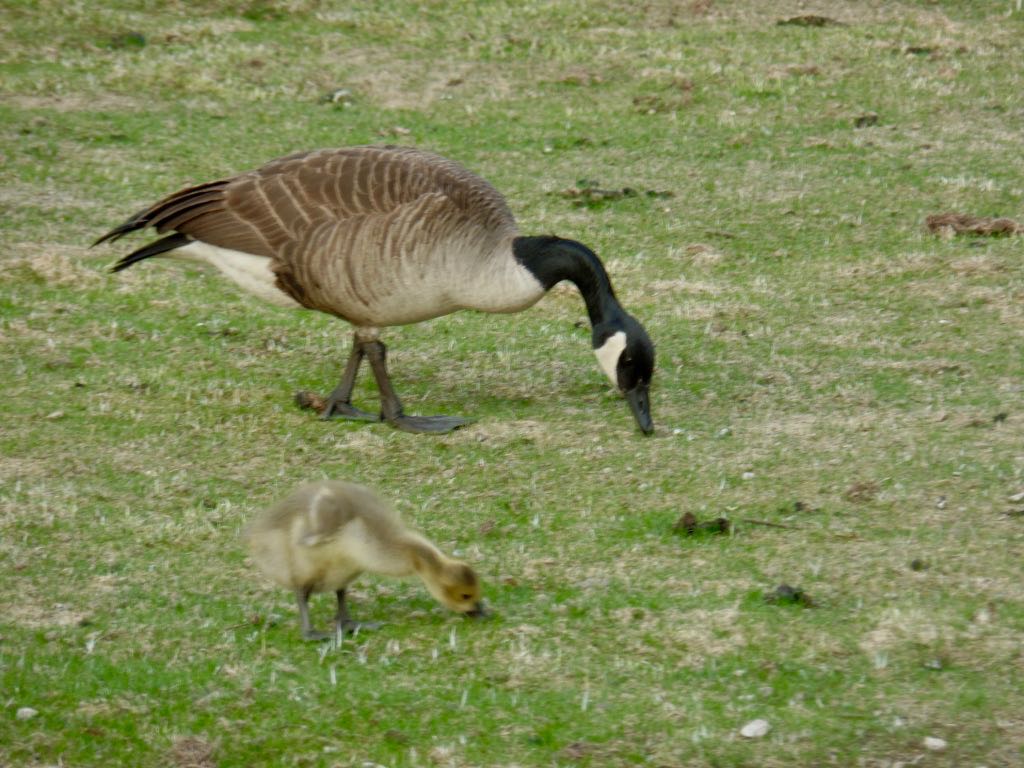 Still more wildlife: a goose and gosling prowling around the Mine Ride infield. 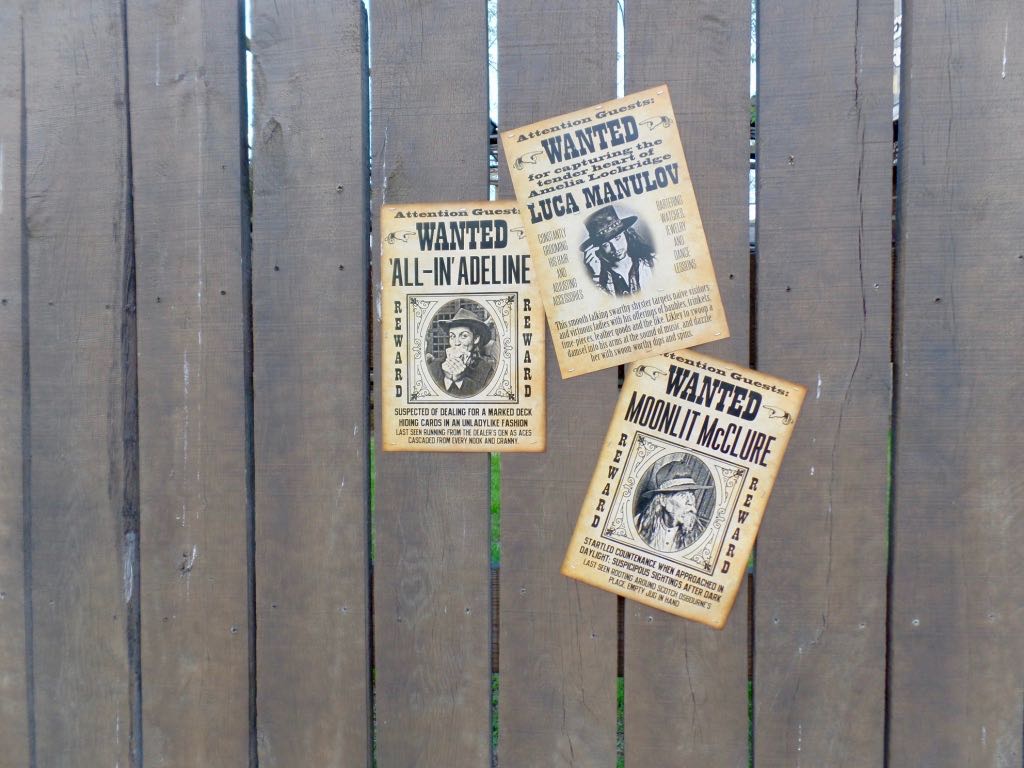 Some wanted posters put up at the Mine Ride and to flesh out the Fronter Town setting. 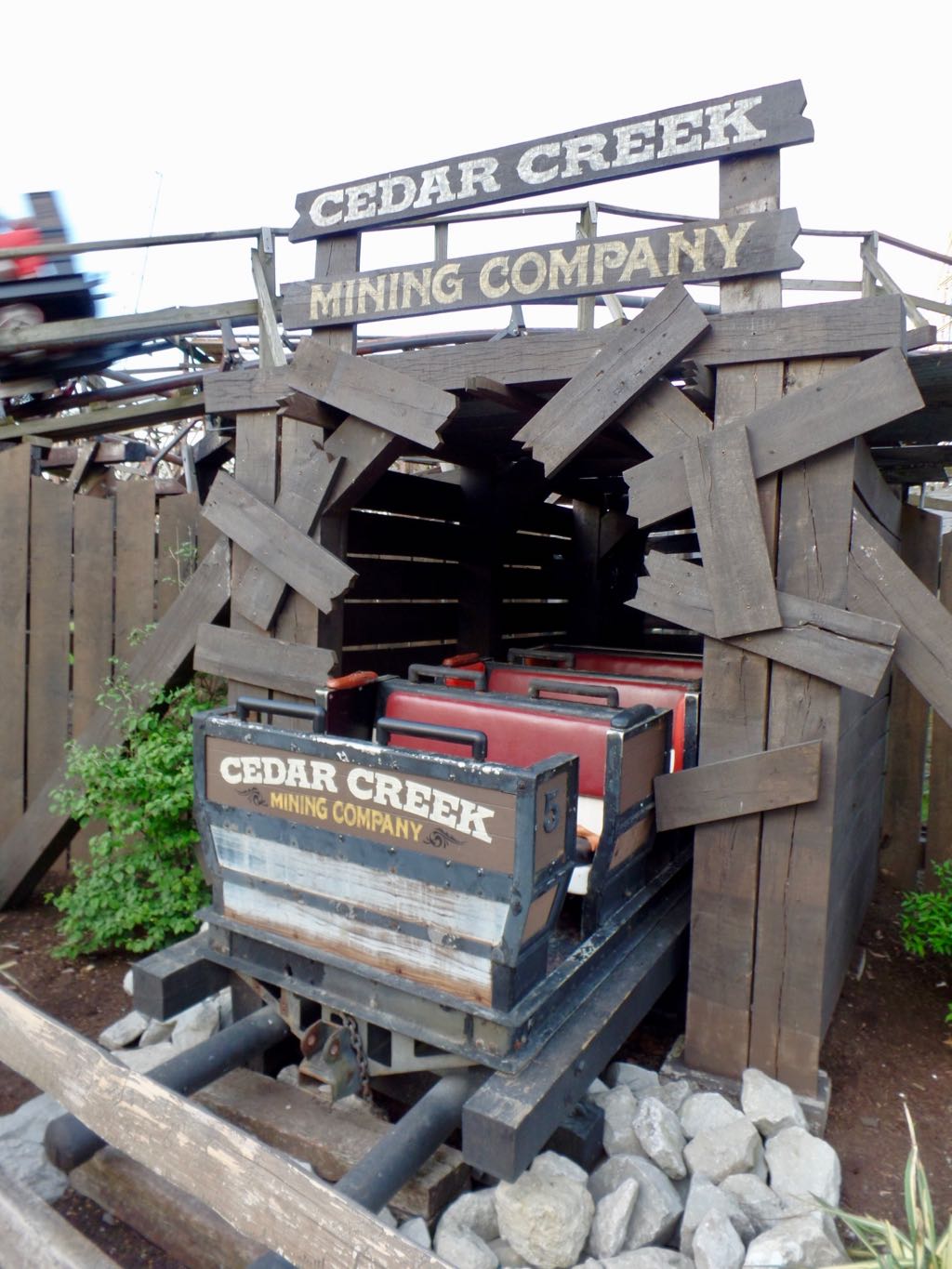 The long-out-of-use former entrance to the Mine Ride's queue area got this prop. The roller coaster was designed to be able to run five trains at once but I've never seen more than three and even that's a rare event. 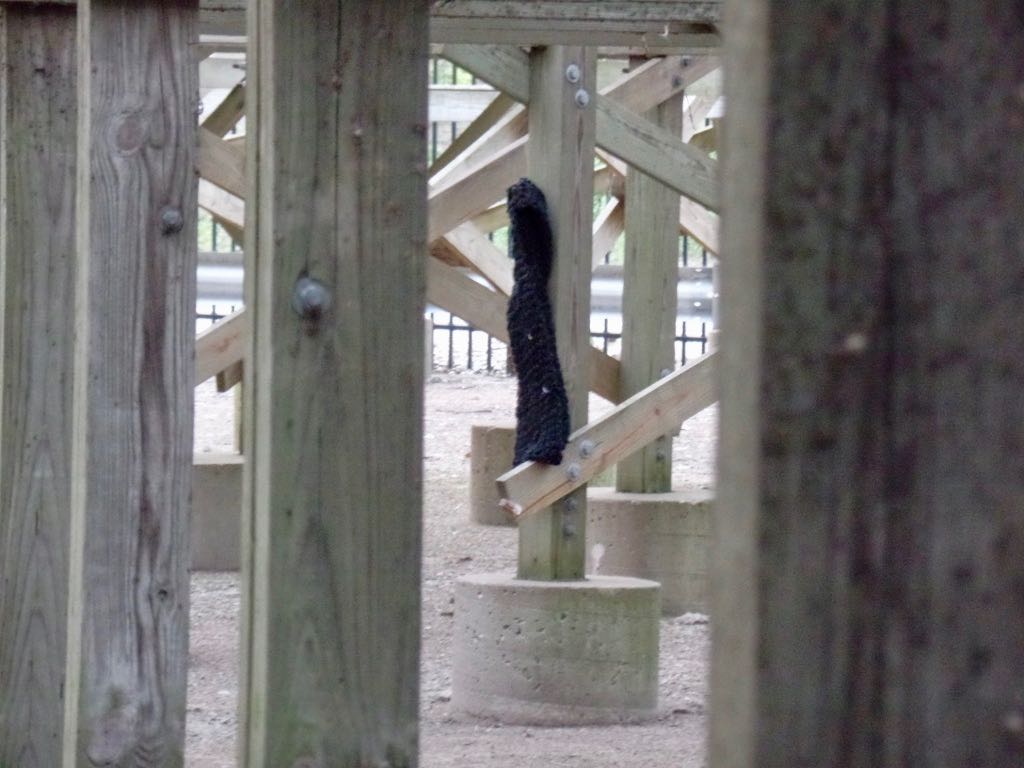 Gone back for a closing ride on Steel Vengeance. Here, there's a shag carpet nailed to one of the pillars for some reason? 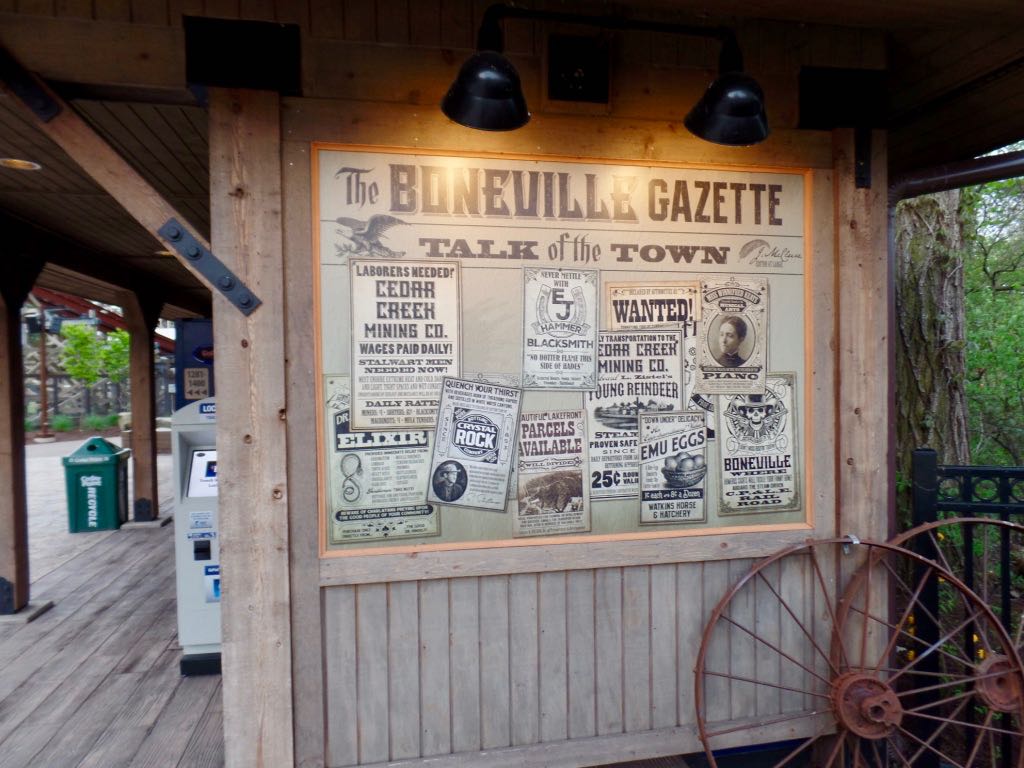 Billboard for Frontier Town. Note the emu eggs for sale; one of the Steel Vengeance-related fellows is given the backstory of being an Australian emigre who figured he could raise emus in the American West, which is a quite plausible daft idea. It smacks of someone at the park having the idea that emus are so very funny they've got to be worked into stuff, but it also serves as a pretext to add some more exotic wildlife to the petting zoo/dubiously-historical-farm. 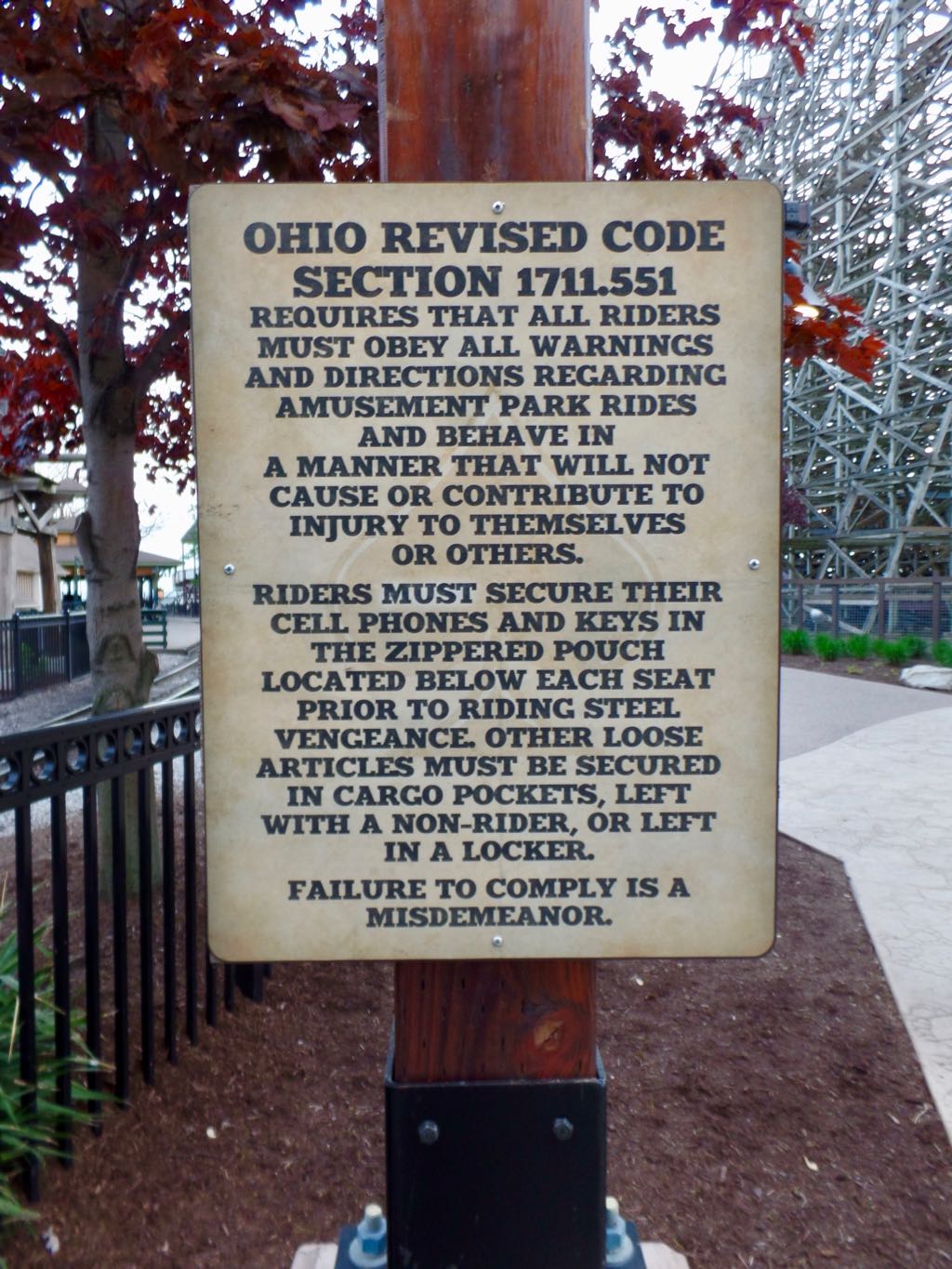 A ride safety sign done vaguely in an Old West style and also letting you know about the cell phone zipper pouches and whatnot. 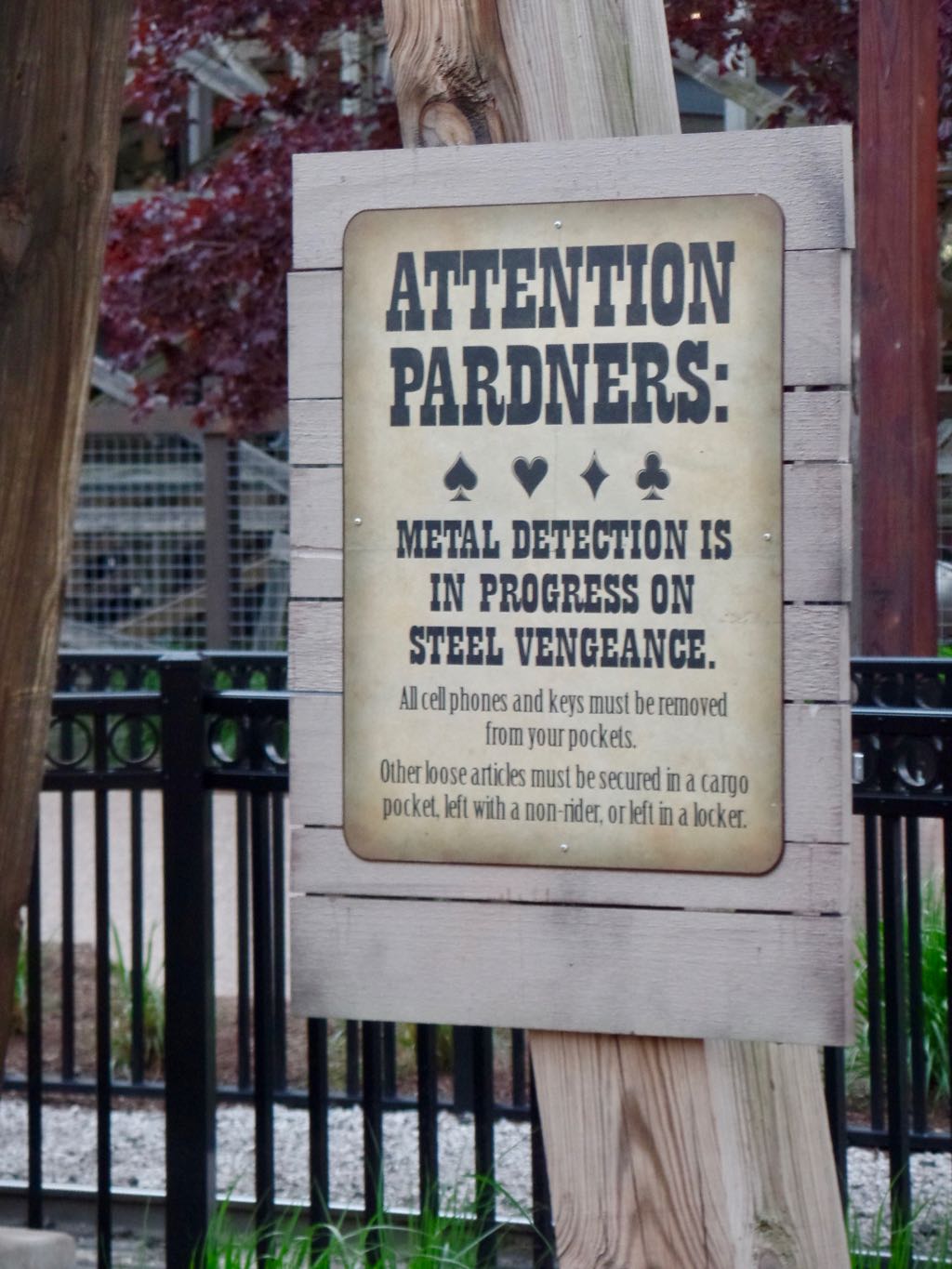 The attempt to write about very modern things like metal detectors and cargo pockets in an old-timey way always comes across amusingly weird. 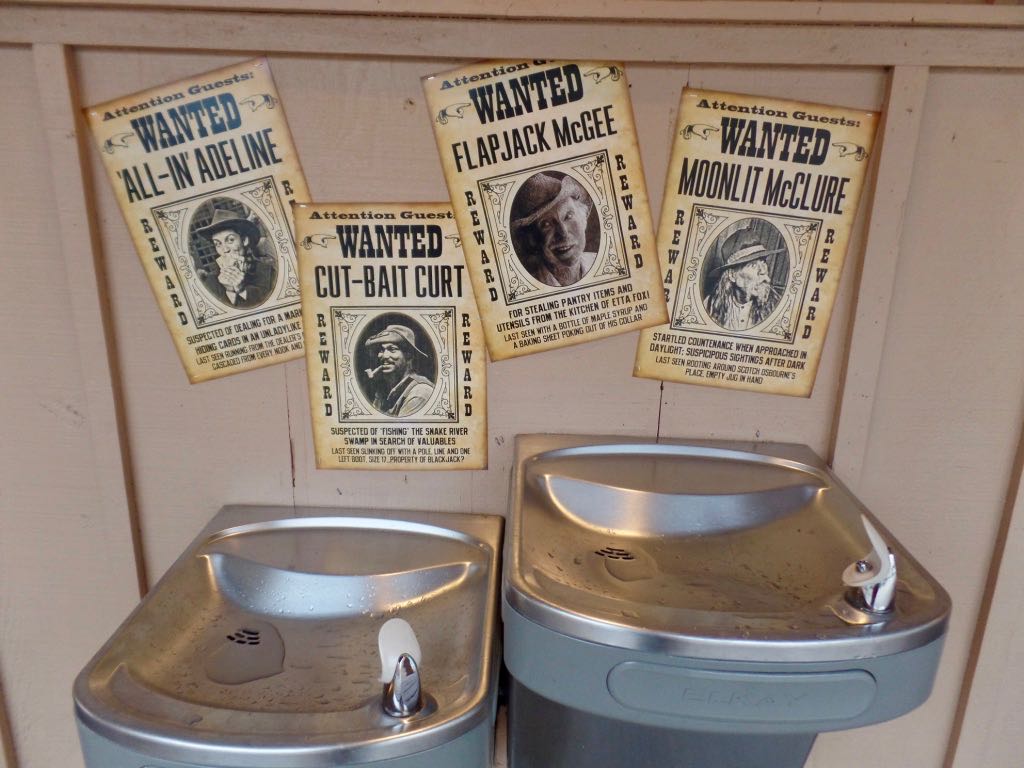 And some more wanted posters, here at the water fountains outside one of the Frontier Town bathrooms.

Trivia: The flag deployed by Apollo 11 was a three-by-five foot nylon flag bought from an ordinary US government supply catalogue for $5.50. Source: Safely To Earth: The Men and Women Who Brought the Astronauts Home, Jack Clemons.