The kitchen light stopped working maybe a week and a half ago. No clear idea why. I couldn't get the dome covering the light fixture off; it's held by three metal clips that are clearly under tension together.

bunny_hugger's father had gotten it off once, a decade or so ago, and advised that it was just a matter of pulling. Also that there wasn't any bulb, just some weird ... thing ... there. All right. Also the light switch, which has that little drop of mercury so it glows amber when the light is off, glowed only dimly. Defeated by what all this means, we called an electrician, who was able to come out this morning.

Also in the meanwhile

bunny_hugger's father sent about 120 nagging e-mails about how we should get a new fixture for them to put in. Had he recommended this only once, or twice, we might have gone for it. But the repeated insistance tripped my contrarian impulse. Also, last night, we were too busy cleaning to go anywhere we might have gotten a light fixture anyway.

So this morning they showed up, took the light fixture off, and identified the problem: the halogen light bulb was burned out. They recommended replacing the fixture and that they'd waive the service charge for a return visit. This was all done without my even stirring; I got the news when I came down this morning, much later than I figured I'd be waking.

When I went to Meijer on a separate and failed light-bulb-related incident (more later and you have no idea), first, the recycling center was already closed for the day, and second, they had halogen bulbs, two for eight bucks. So I got a pack and put it in. And we cleaned off the frosted glass dome. And, with

bunny_hugger having gotten some advice from the electricians, we learned how to put the dome on and off. You have to push it as hard as it'll go against two of the three clips, and pull the third clip out until the dome will snap into (or out of) place. Having tested that a couple times, well, good. The kitchen light is now bright enough --- four thousand lumens, says the box --- that it lets us see into the refrigerator while the door is still closed.

It does mean at heart we paid a hundred-plus bucks for the electricians to tell us we needed a bulb replaced. But we wouldn't have dared get the dome off the light fixture without them, so I guess that's something. And it might be valuable insight for the light fixture in our bedroom, too.

Meanwhile I'm content to kick the ``replace the kitchen light'' issue down the road twice the lifespan of a halogen bulb. (The box says 2,000 hours, but then the old fixture had been in place at minimum 21 years.)

For the first part of today's photo dump, it's a couple final pictures from Friday at Anthrohio 2019. 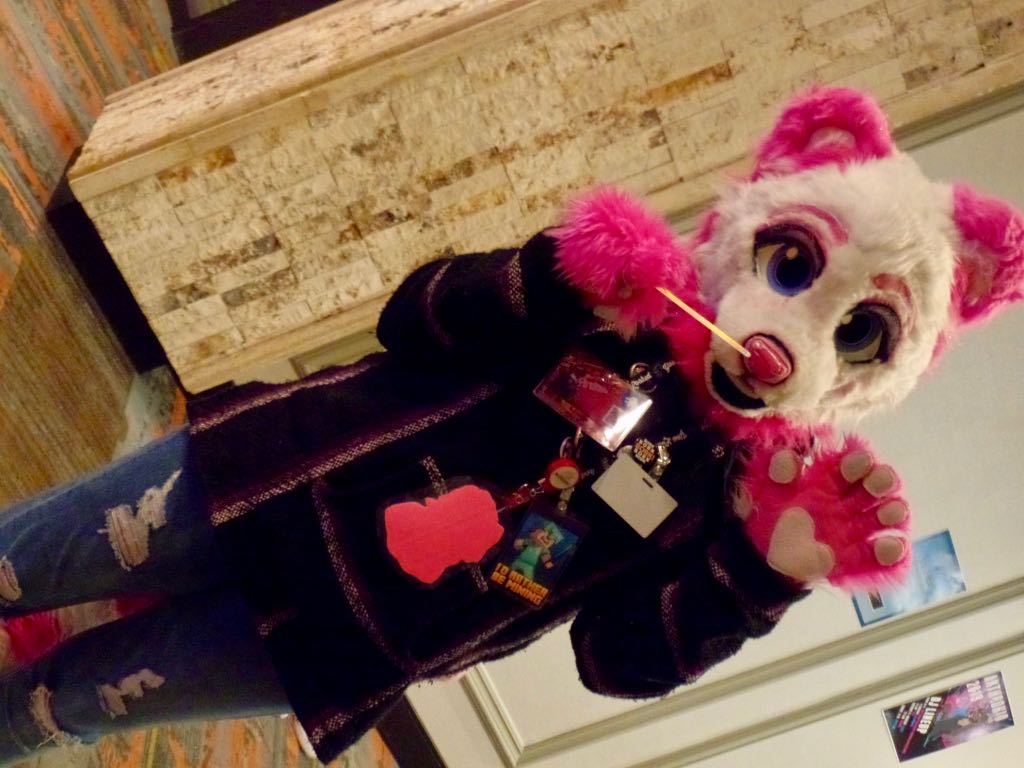 I believe this suiter was waving the popsicle stick like a baton, outside the dance. 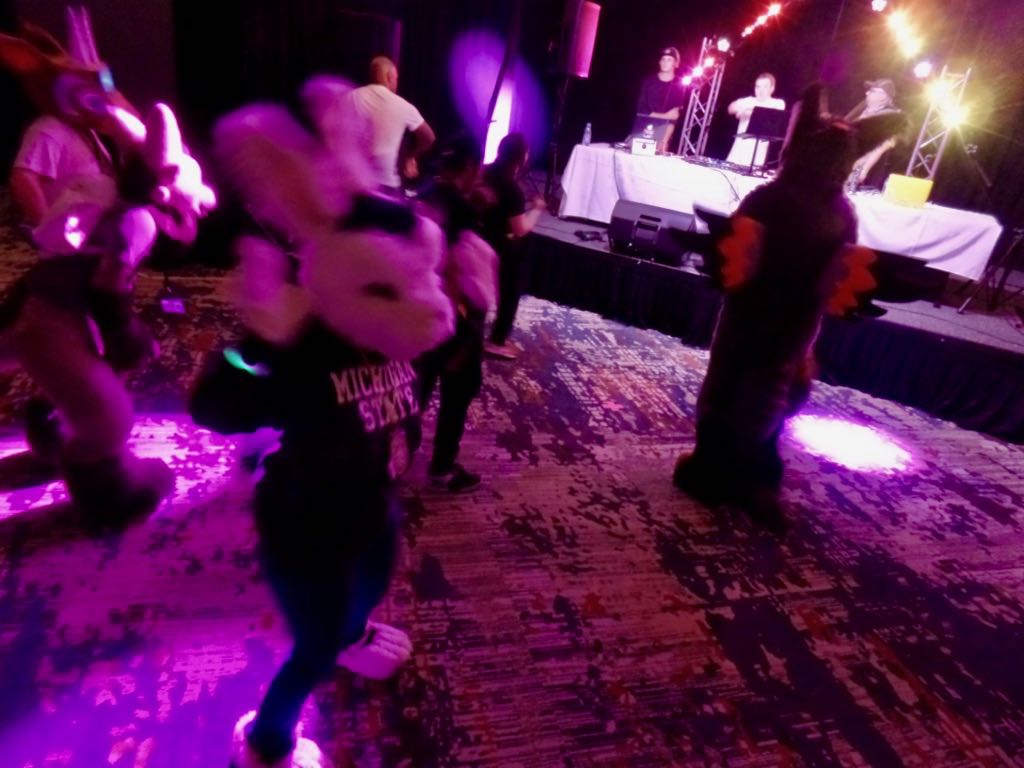 Friday night's dance was lightly attended but had a pretty good floor space for it. 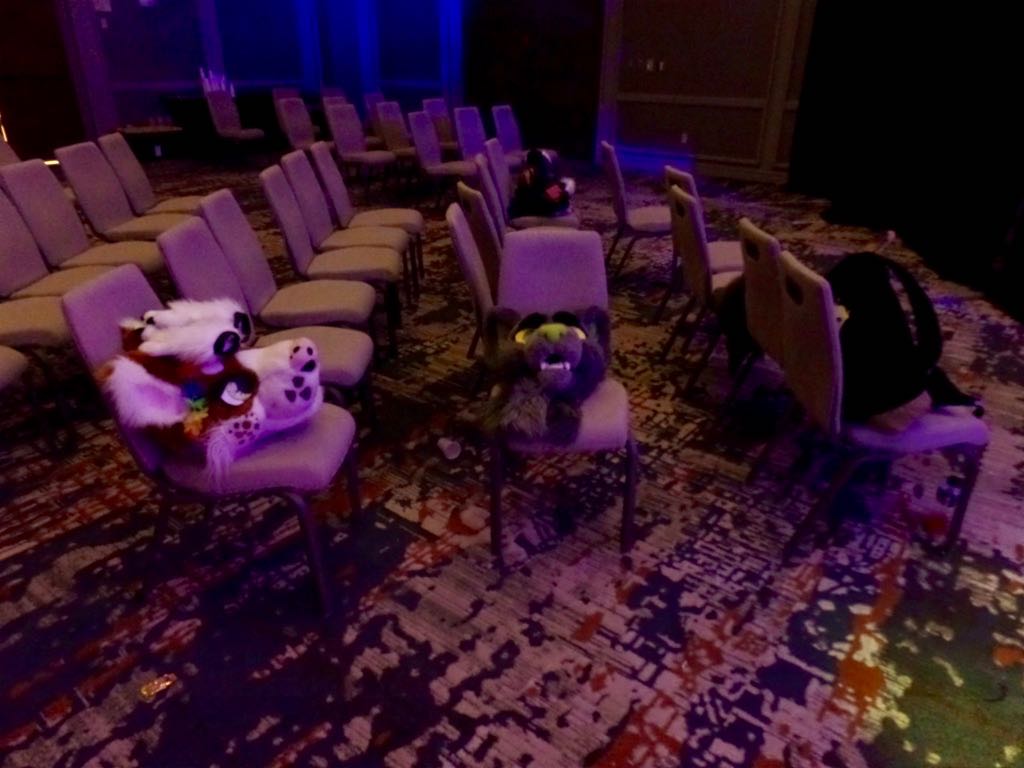 Lot of detached heads in the audience tonight! Let's give them a big hand, they can't do it themselves. 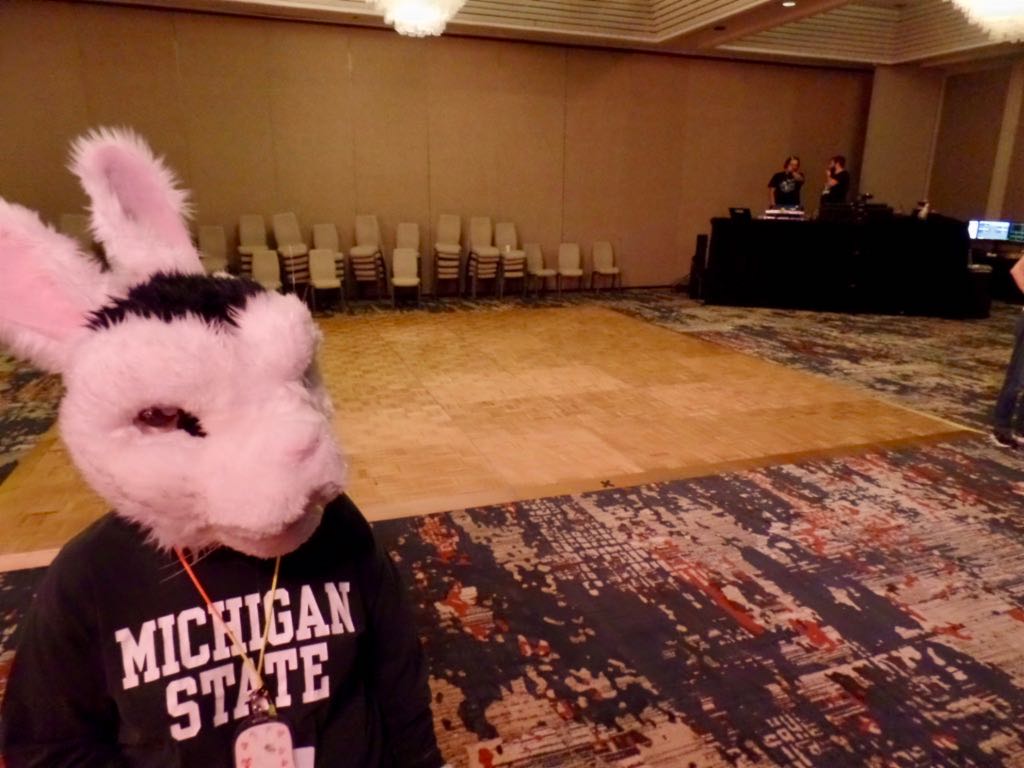 bunny_hugger not satisfied with the length of the dance. (I think it ran through 2 am.)

And now to Saturday! We got up in time for the fursuit parade, of course. 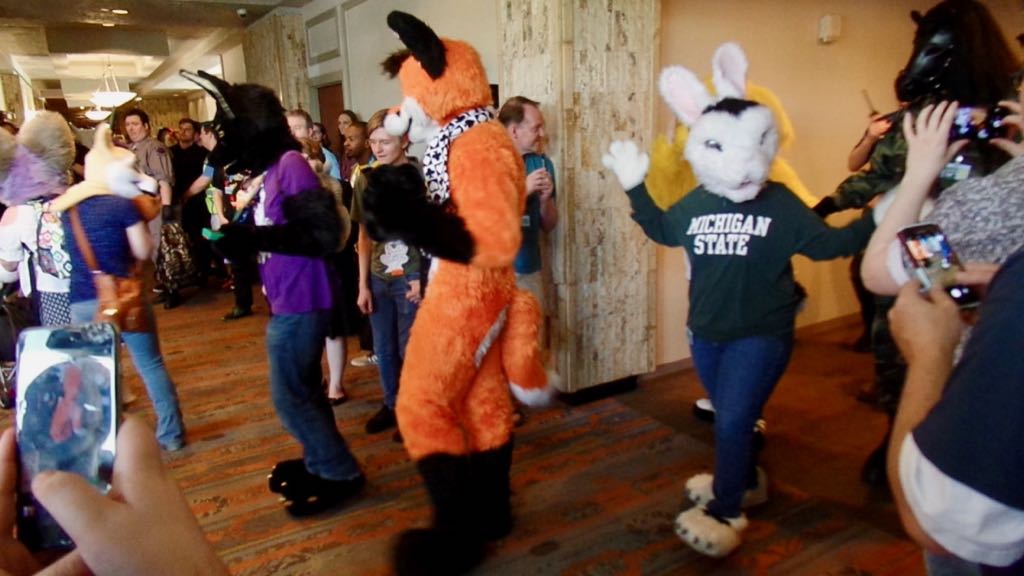 bunny_hugger leads the fursuit parade! And by ``leads'' I mean ``marches as close to the back as she possibly can so she's not left at the back of the group picture''. I haven't figured out the angles of the new hotel yet, nor learned what the parade route really is, but I figured a corner was probably a good place to get people from different angles. 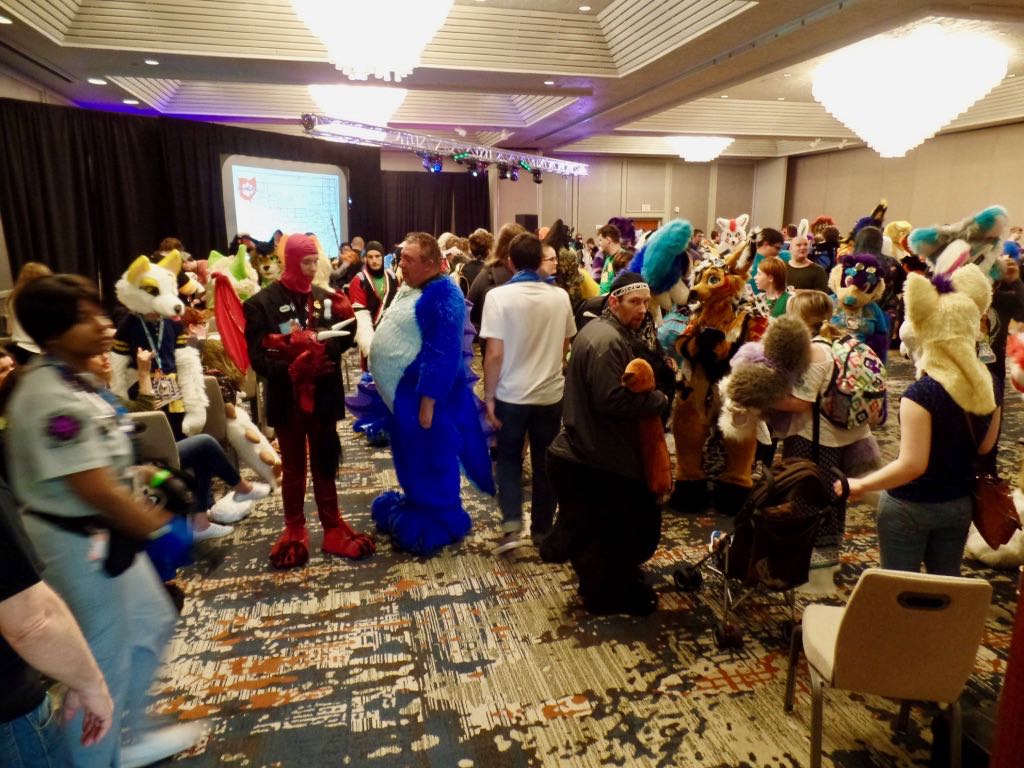 People gathered around the ballroom, the start and end point of the parade, figuring out what they need to do next. 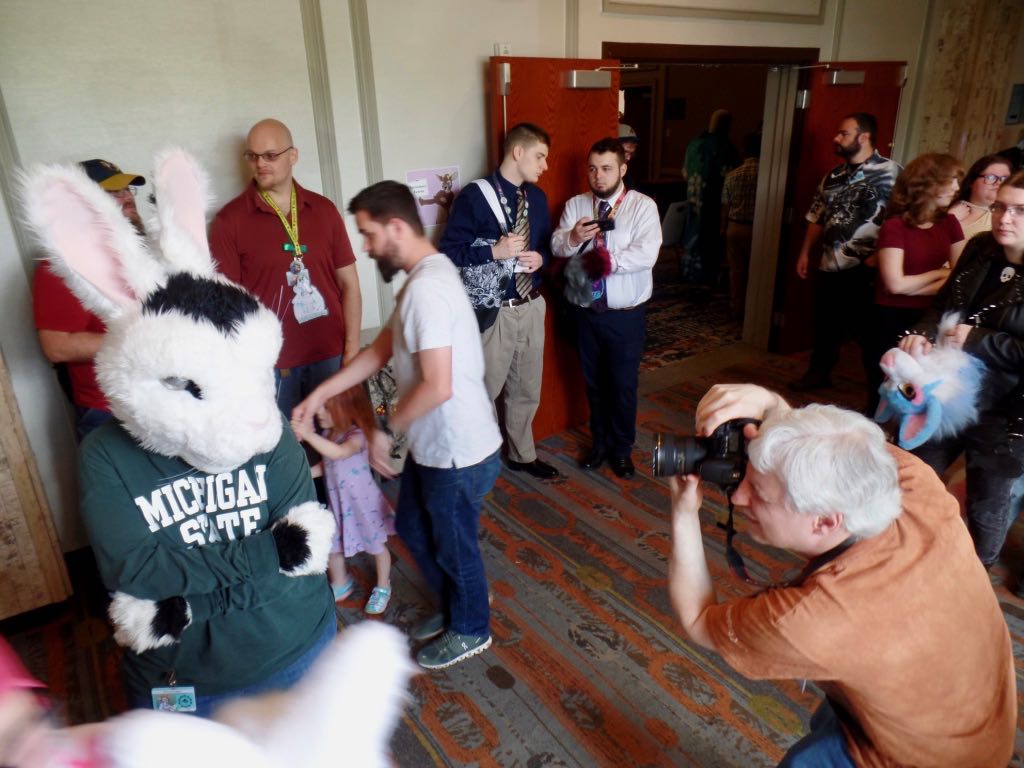 bunny_hugger poses for some pictures from Freddie Grey. 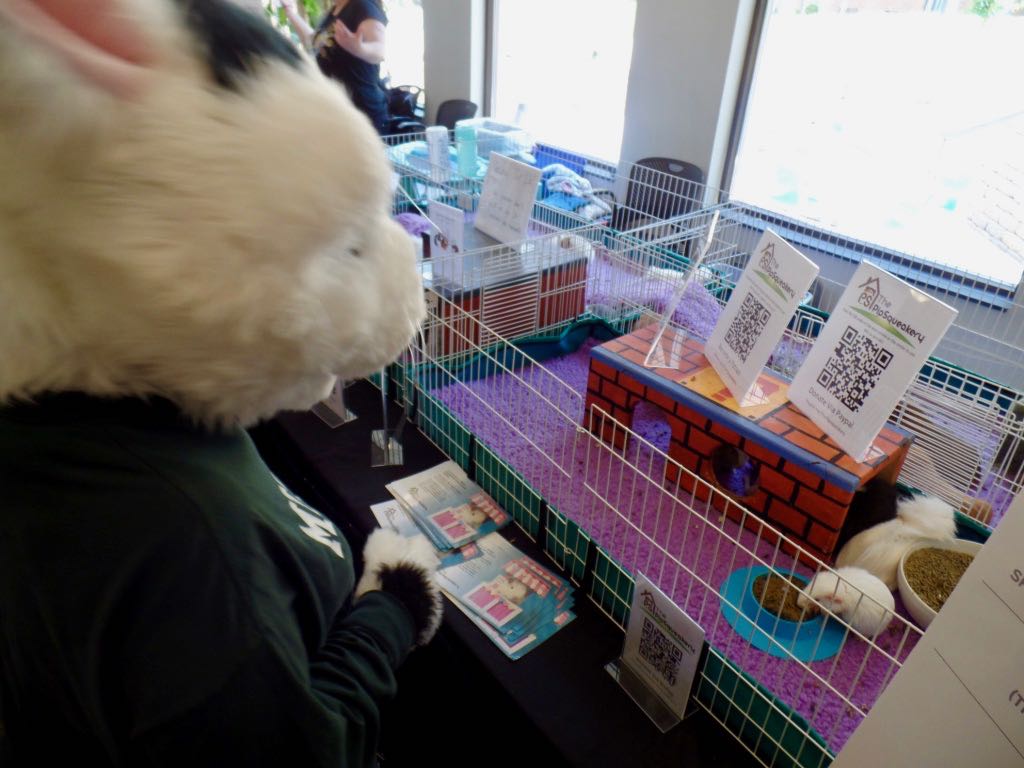 bunny_hugger pays a visit to the rodents, if you accept that guinea pigs are rodents. 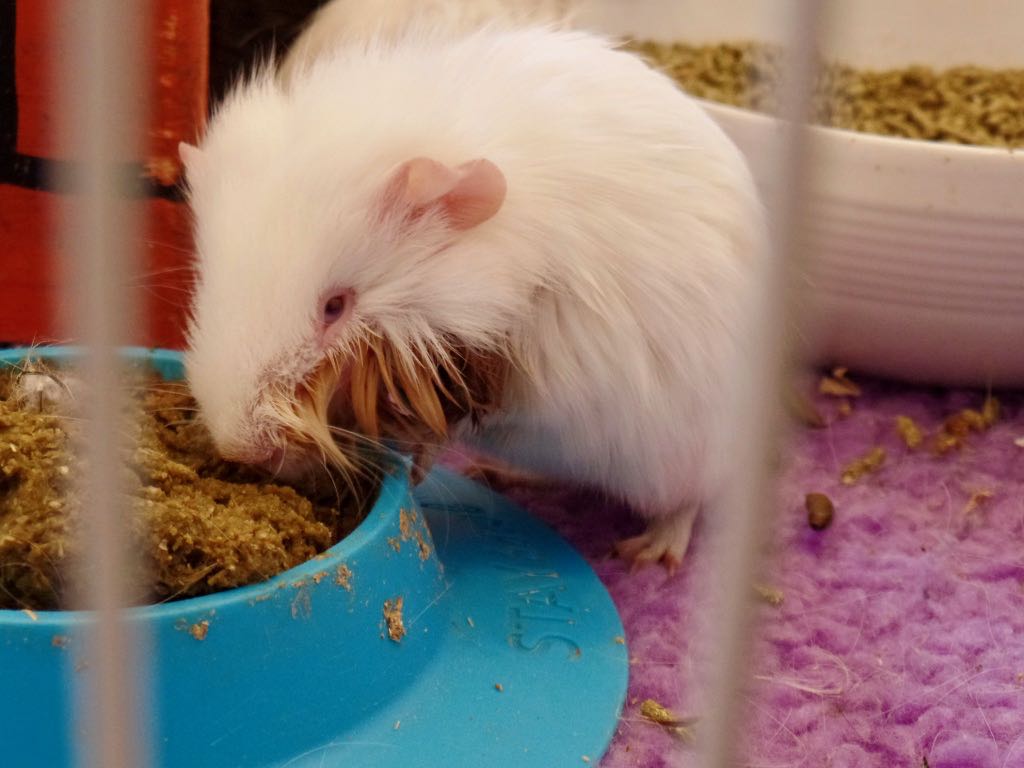 Guinea pig having a bit of a messy lunch. 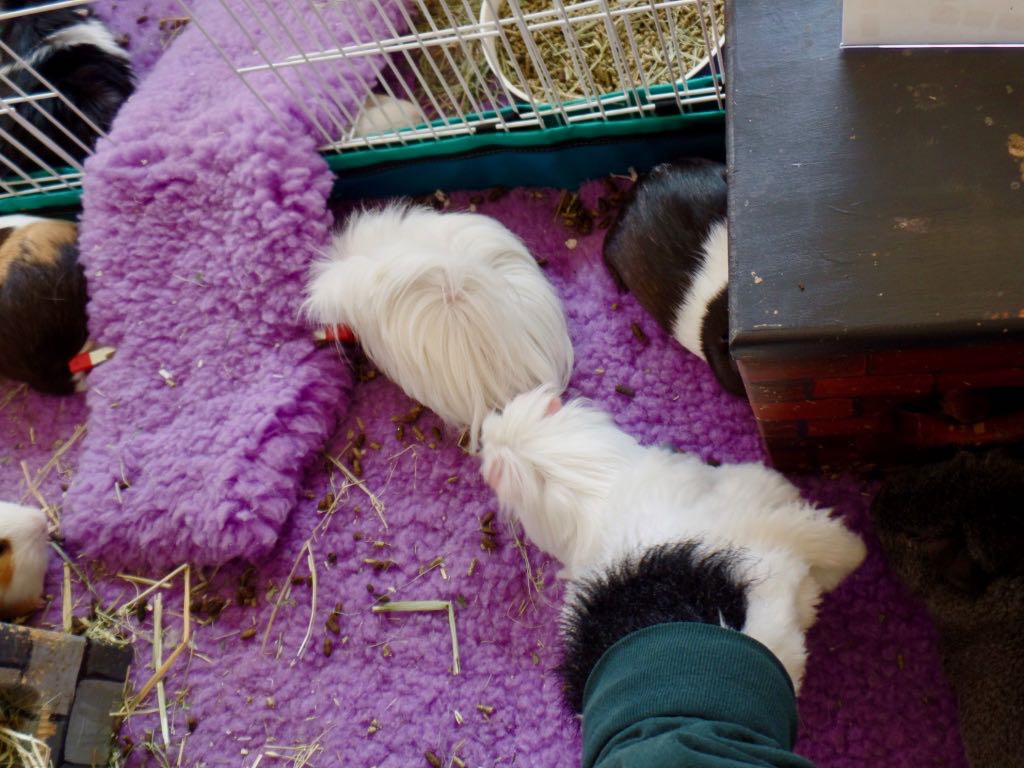 bunny_hugger reaching in to pet some guinea pigs who aren't sure if they were meant to be invited to this meeting.

Trivia: Napoleon Bonaparte, held as prisoner after losing to the Allies in 1814, was almost lynched in Provence and disguised himself as an English lord and then an Austrian officer Source: The Discovery of France: A Historical Geography, Graham Robb.

Currently Reading: Let's Go To Europe And Draw, Peggy Macnamara. This month's free e-book from the University of Chicago Press, and this one you don't even need to request by e-mail. Just download it by the 1st of August.