So will you please say hello

bunny_hugger decorated the house for Christmas. She's talked about this some, inspired by people who had set out lights as a promise there would be joy after the pandemic. And she even said last night how she had to get some things down from the attic; I took her vagueness about what the things were just to reflect that she figures I'm rarely worried about things.

Unfortunately I went and slept just the right length of time that she couldn't see me coming downstairs and my surprise and delight and joy at this. She'd even set the stereo system playing from her Christmas soundtrack, so I first saw all this while something from Jethro Tull's Christmas album played.

It's been a rough month, with a lot of disappointing and frustrating and aggravating developments. She gave to me this moment of lightheartedness and delight and I know that it was the giving that she wanted. I'm only sorry that I couldn't share the moment of discovery with her.

Back to Anthrohio 2019! I took fewer pictures of just hanging out in conference rooms for SIGs this year, and of stuff like hanging out in Hospitality, because, hey, I can get plenty of those pictures every single year, right? That worked out great. But, to the stuff I did photograph. 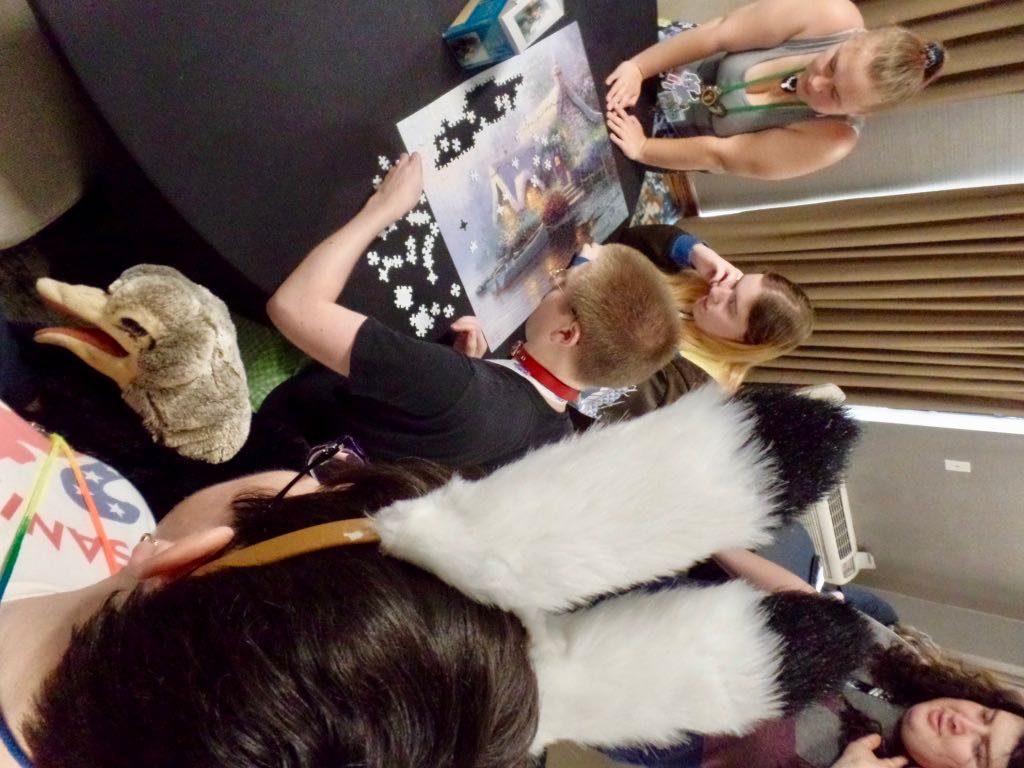 bunny_hugger watches other people approach completion on the jigsaw puzzle. Her ostrich can not believe their technique. 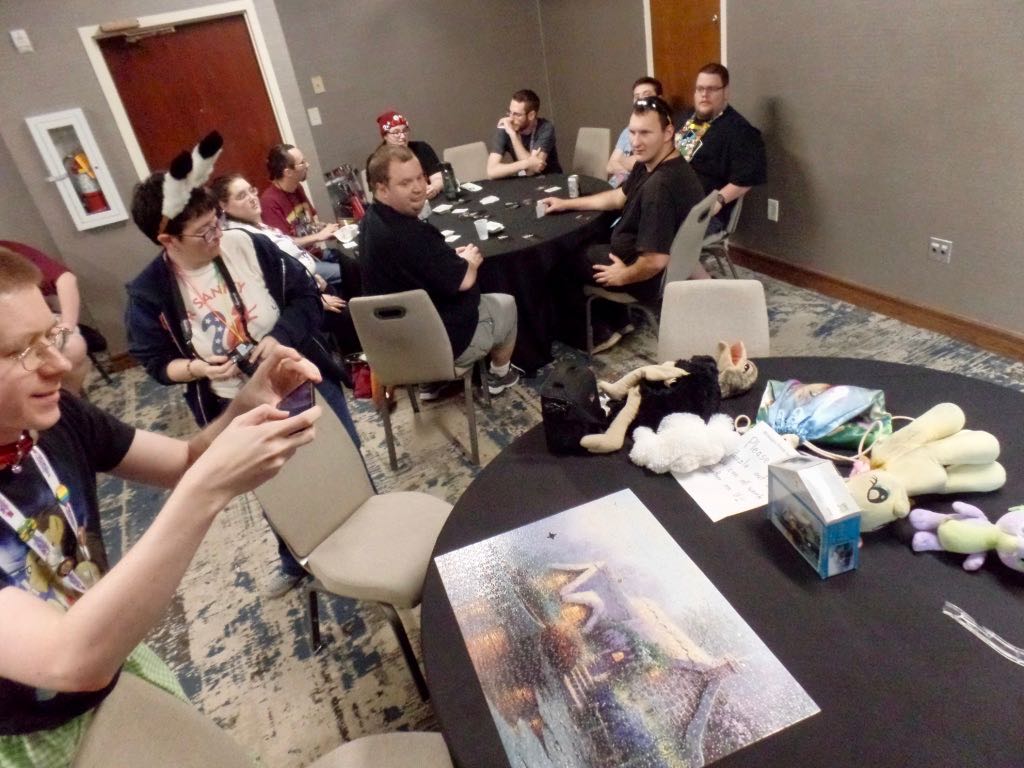 And completion! Or as close as it gets: there was the one piece missing and as best we could tell it wasn't on the floor or anything. One person quite bothered

bunny_hugger is an experienced enough jigsaw puzzle solver to know that piece counts are only approximations. A ``thousand-piece`` puzzle may easily have some number near to a thousand but more convenient for cutting into rows and columns that fit the picture's aspect ratio, such as 992 (31 rows and 32 columns) or 1008 (28 rows and 36 columns) or 999 (27 rows and 37 columns).Anyway there was that one piece certainly missing. 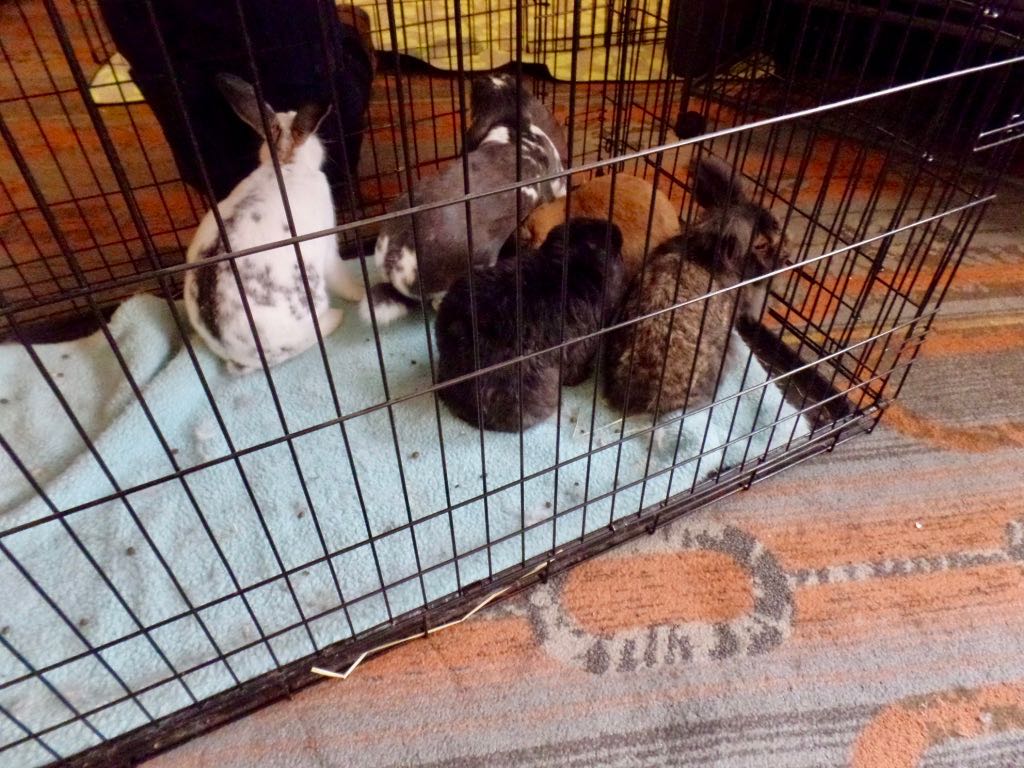 Last look at the bunnies! The rescue was gathering them up to bring back to the shelter. 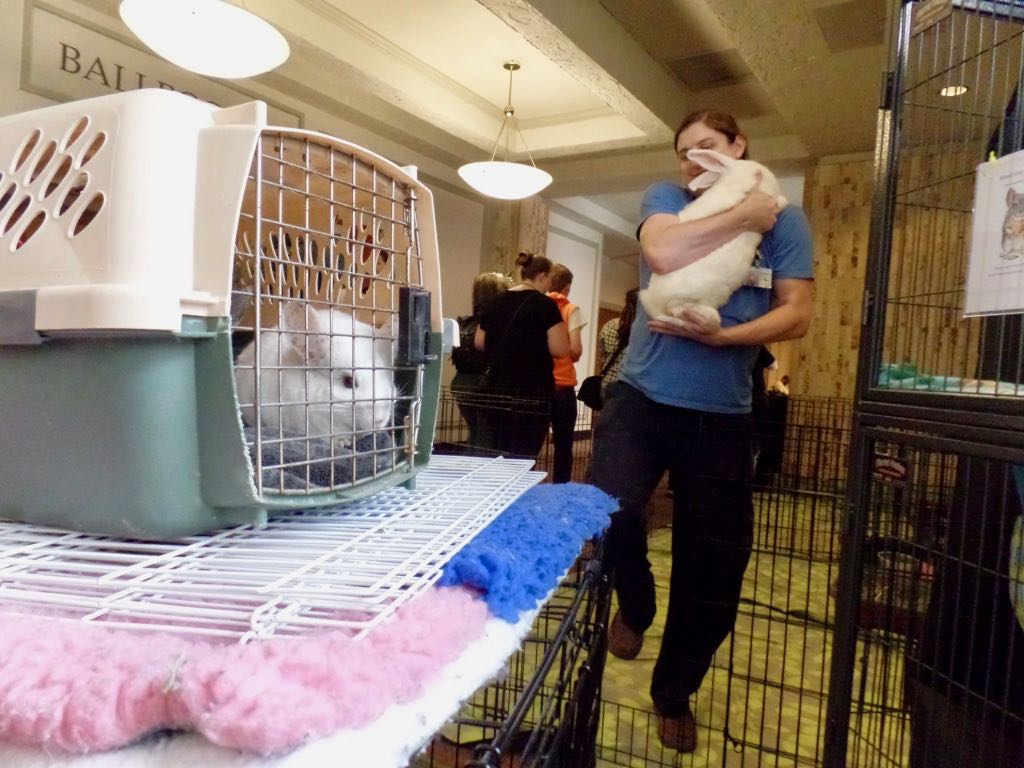 Red-eyed white rabbit being taken to the carriers. Chinchillas not at all sure about this. 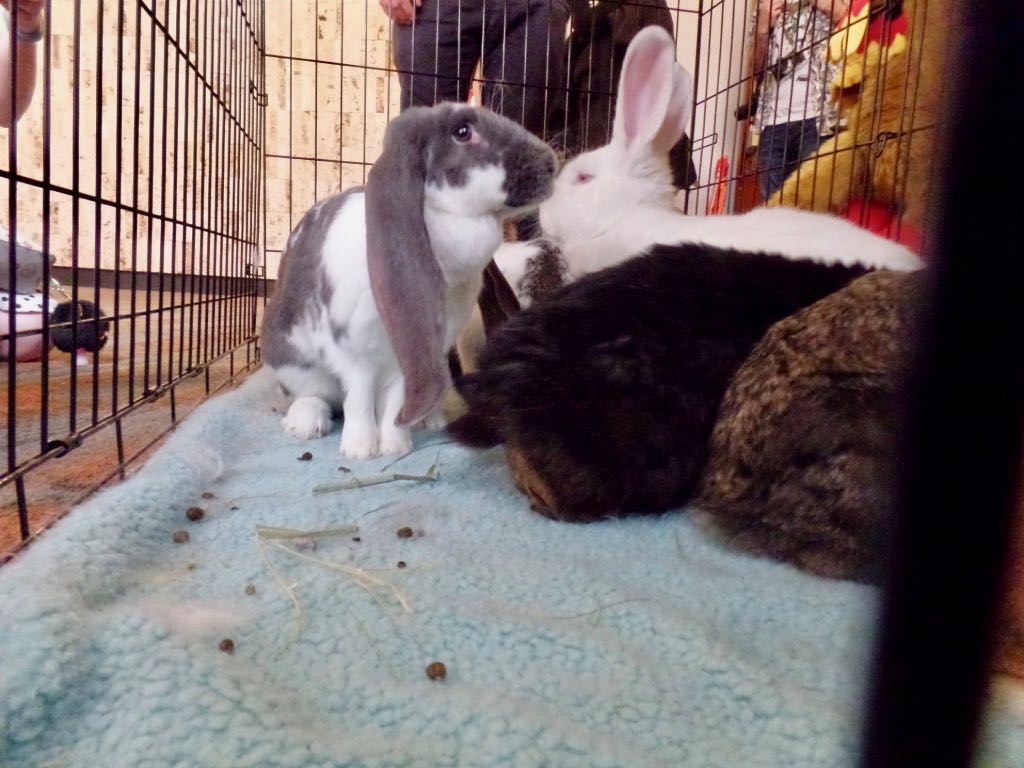 Big-eared bunny gives a quick little kiss as they face their journeys ahead. 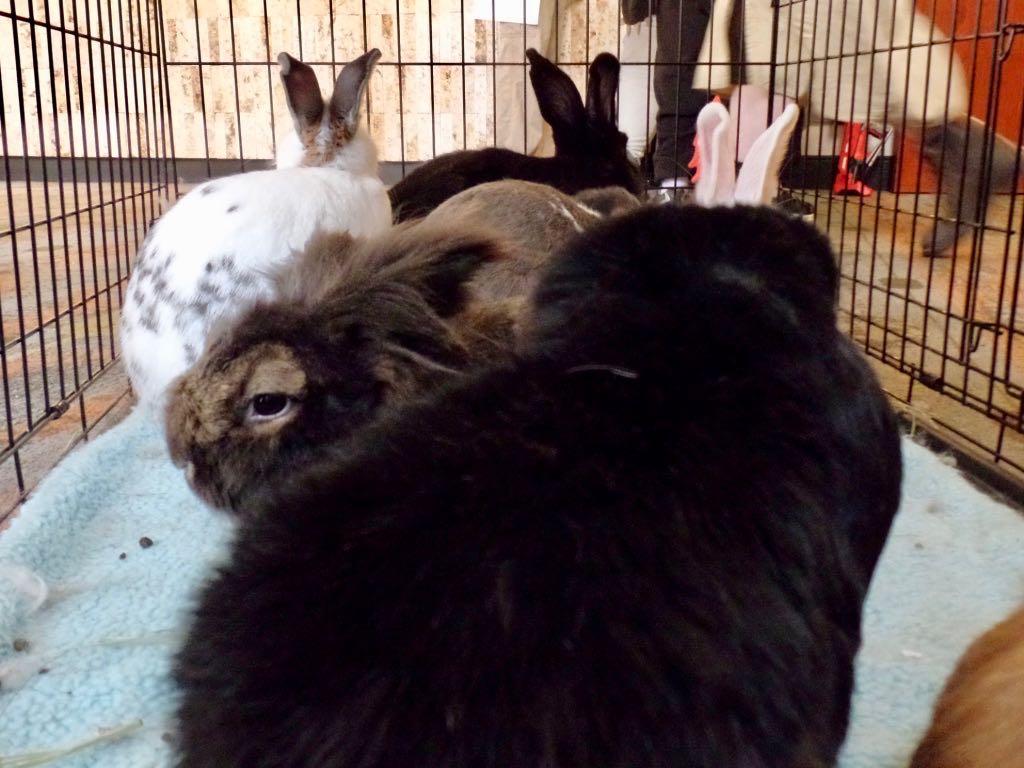 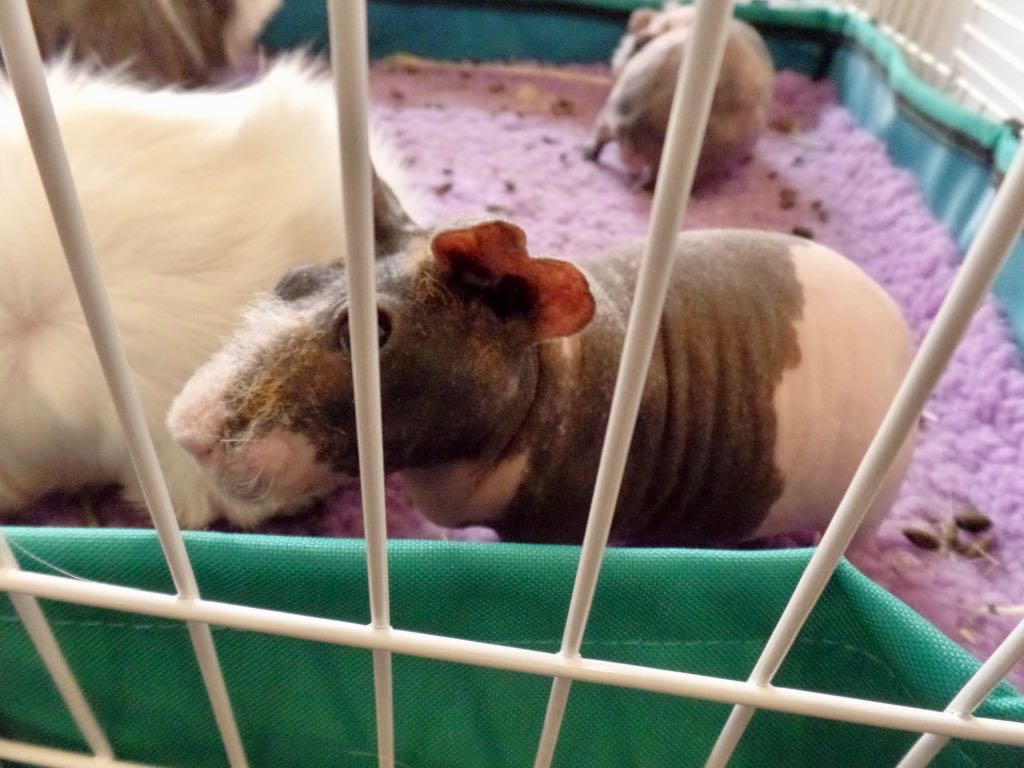 Here's one of the hairless breed of guinea pigs, sometimes called ``skinny pigs`` by people who want to make them sound worse. 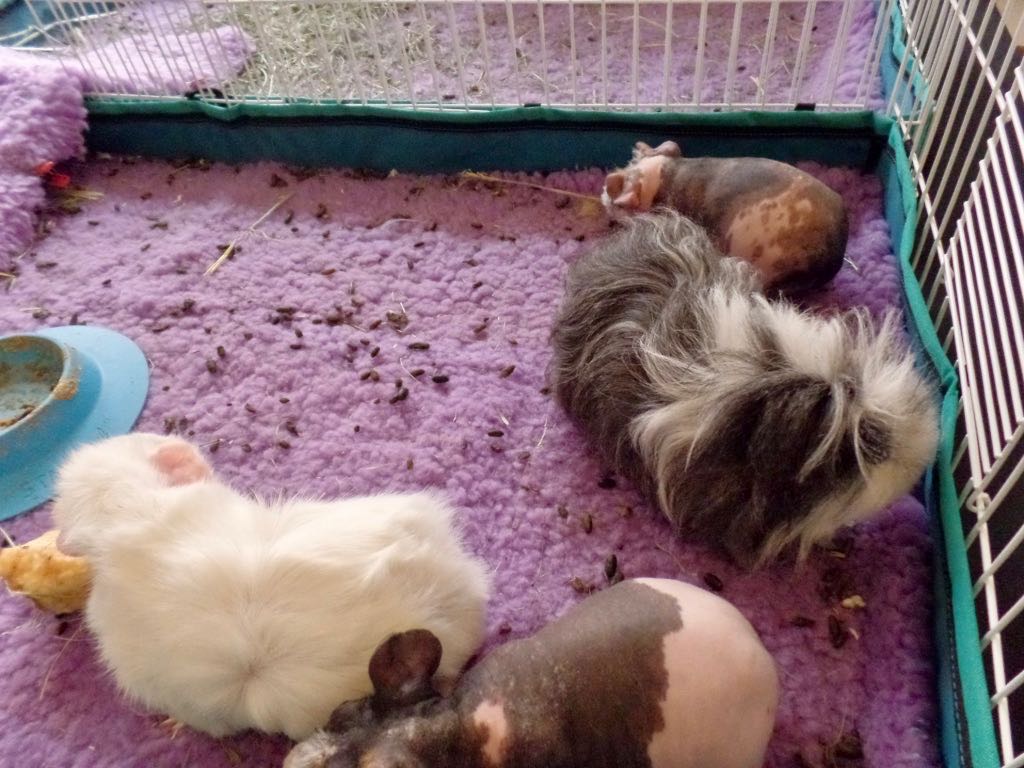 Bunch of the guinea pigs, Abyssinian and hairless, wondering why they were invited to this meetings. 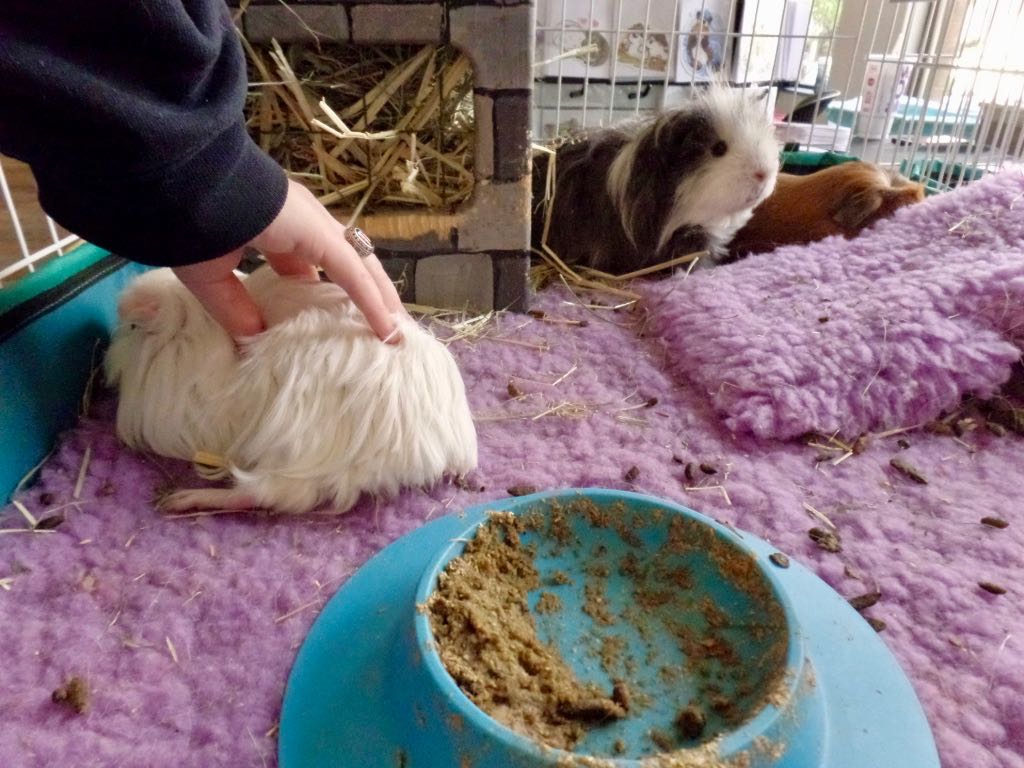 Guinea pig looks very concerned by what the future holds! 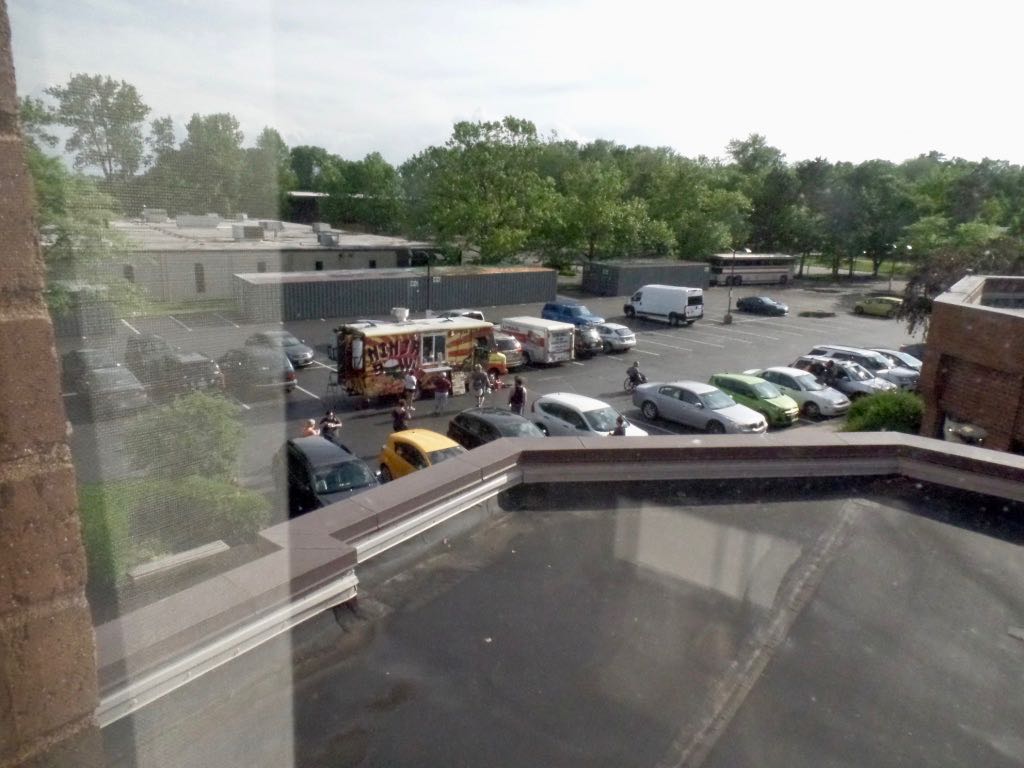 And a look out on the grease truck the convention had gotten for extra eating options.

Trivia: The first leaded gasoline was sold in Dayton, Ohio, in 1923. By 1924 William Mansfield Clark of the US Public Health Service warned that tetraethyl lead was exceedingly poisonous and could be a public health risk. Source: Down to Earth: Nature's Role in American History, Ted Steinberg.

PS: Using my A to Z Archives: Fourier series, to share something about really useful mathematics.