Oh, Chrissy, the Christmas mouse lives in the middle of Santa's house

bunny_hugger set up lights and decorations for Christmas In July. And this inspired our movie choice: the DVD The Nutcracker and the Mouseking, which she had gotten as a door prize at a party. We'd tried watching it once long before, when our DVD player broke. We finally gave it a new try.

It's a 2004-released traditional-animation based loosely on ETA Hoffmann's story of the Nutcracker Prince. It's also really quite bad. Originally in German, I believe, although there's a lot of Russian animators and staff in the credits. But this stands out because the dialogue is done in that Bad Dubbed mode, where way too many words get shoved into each line. The English voice actors are a bunch of respectable enough comedian names, Leslie Neilson, Eric Idle, Fred Willard, Robert Hays ... and they say just way too much. A lot of the dialogue is nervous, fidgety stuff. A character's climbing and it's not enough that he's struggling, he talks about he's got to get to the fitness center. Are there fitness centers in Vaguely 1900 Russian City? Who cares? It's zany, like all those great riffs Robin Williams did at the Genie, so that's why it's all here. Idle and Willard play mice named Bubble and Squeak, so that's the level of joke pitched here. (At one point Bubble, or maybe Squeak, asks the other if he has a match. The answer: ``Yeah, your face and my rear end!'' But ha ha ha he has a match match, too.) Neilson plays the Mouse King, using a voice that makes him sound like Jerry Stiller except when he forgets and turns back to Frank Drebin.

I'm not being snarky when I say the best part is when the movie is quiet. There are fair patches where they try seriously to animate the thing and when that's done there's a commitment to well-crafted designs with full backgrounds in motion. But it sure seems like they run out of money along the way; the great ballroom scene at the end tosses up some basic 3-D computer animation that looks like a test run for a Beauty and the Beast scene. Also there's about twenty seconds that use Tchaikovsky melodies; the rest of the soundtrack is generic music product.

The story is about a little noble(?) girl who's enchanted by Drosselmeyer's toy store (which he pulls out of his hat, an impressive animation and fun idea), and loves a nutcracker toy whose backstory Drosselmeyer gives in a flashback that includes flashbacks, just to baffle the level of story reality. The Nutcracker had been a selfish and bratty Prince who tossed Drosselmeyer's magic nut into the fireplace and went and got him and his whole palace staff turned into dolls and the Mouse King, envious of the Prince's place, wants to get the magic nut that blossoms in the land of imagination only on Christmas Eve and the girl fights the Mouse King's army to ... oh, you know, stuff. It's in that weird bad-movie zone where stuff is happening relentlessly and yet nothing is happening and it's exhausting but also boring. Definitely the movie of 2020, anyway.

There's some nice bits. Drosselmeyer growing his toy shop out of a magic hat, for example. Or as the girl goes through the kingdom(s?) of imagination and journeys through weird, surreal landscapes, that gets good. Each link in the shawl the Mouseking's Aunt/Granny knits turning into a mouse warrior. But at the core, the Nutcracker Prince is shown as this incredible brat, and there's no reason to care for him or about him. There's a scene that feels awfully grafted on where he declares how he cares for his staff --- with bubbly hearts appearing in front of him and sent out to something the something for each of them --- but it's no balance for all we've seen of this central character being a jerk. The girl who's fascinated with the doll never threatens to develop a personality trait besides ``is vaguely scolding them to be nicer''.

I'm glad to have seen it, because a movie that's genuinely bad is always a delight, and for it to be Christmas-in-July-seasonal is great. But wow, was it not worth destroying a DVD player for.

So now we come to June 2019, and our great big road trip for the year: our first trip to Canada's Wonderland, and to upstate New York parks, and an amazing expedition in which we got onto every roller coaster we wanted. So here's our first park, and my first visit to Canada. 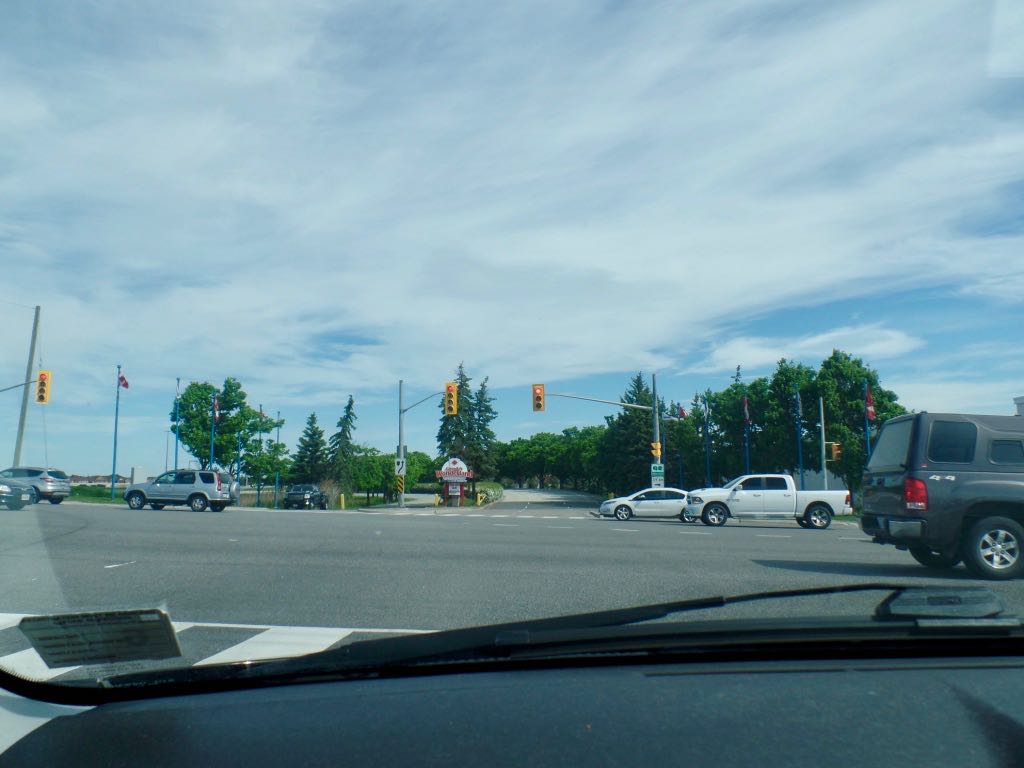 First view! Canada's Wonderland is just off the side of the highway and we came to it from the leg of a T intersection. It's not exactly the rear entrance but might as well be; it's not a particularly prominent sign. There's a bigger entrance way off to the right, from here, but we were just following the satellite navigator's suggestions here. 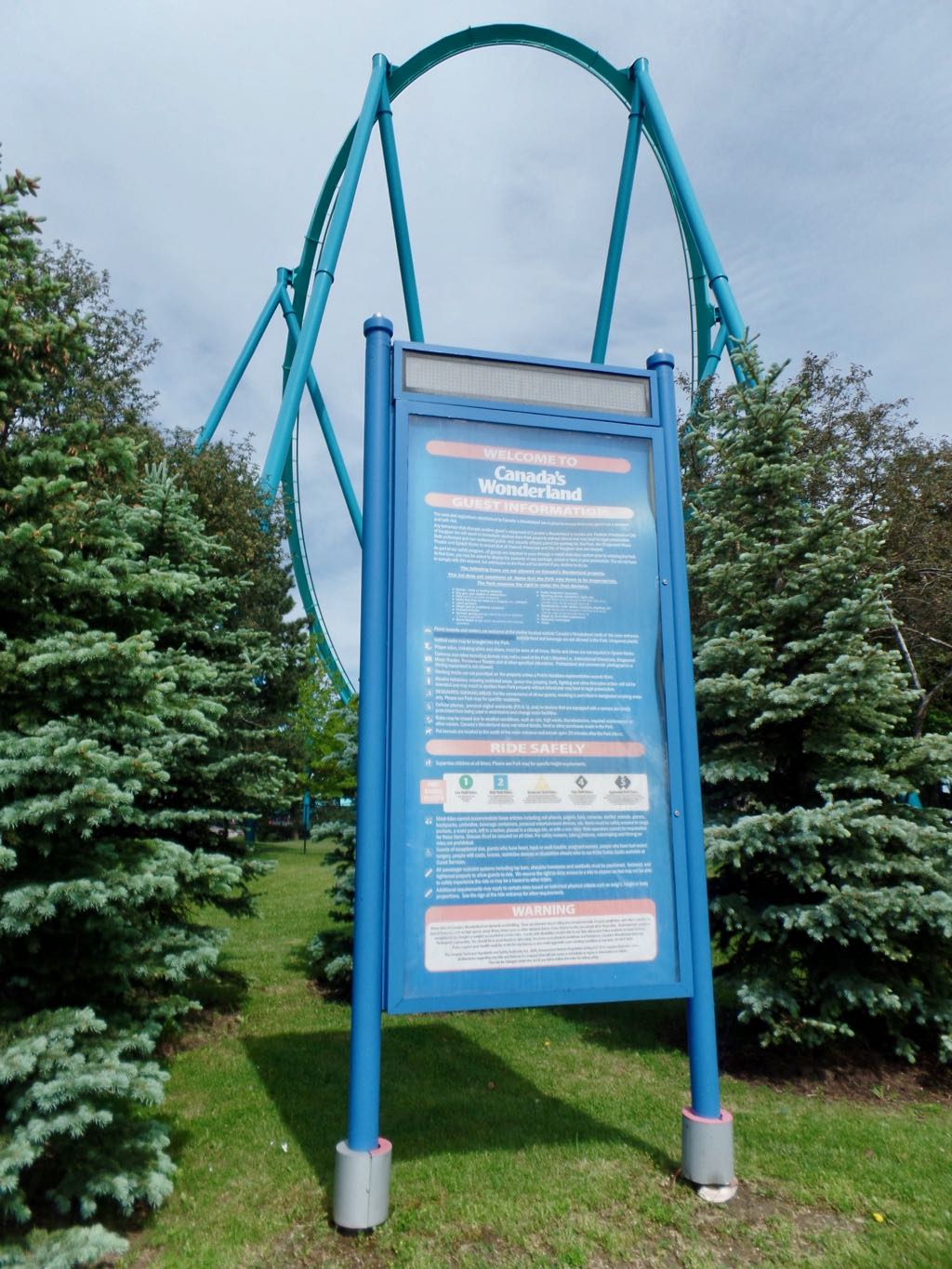 Welcome to Canada's Wonderland! I liked the way the roller coaster loop here framed the safety information sign. I don't know what's taped over either . 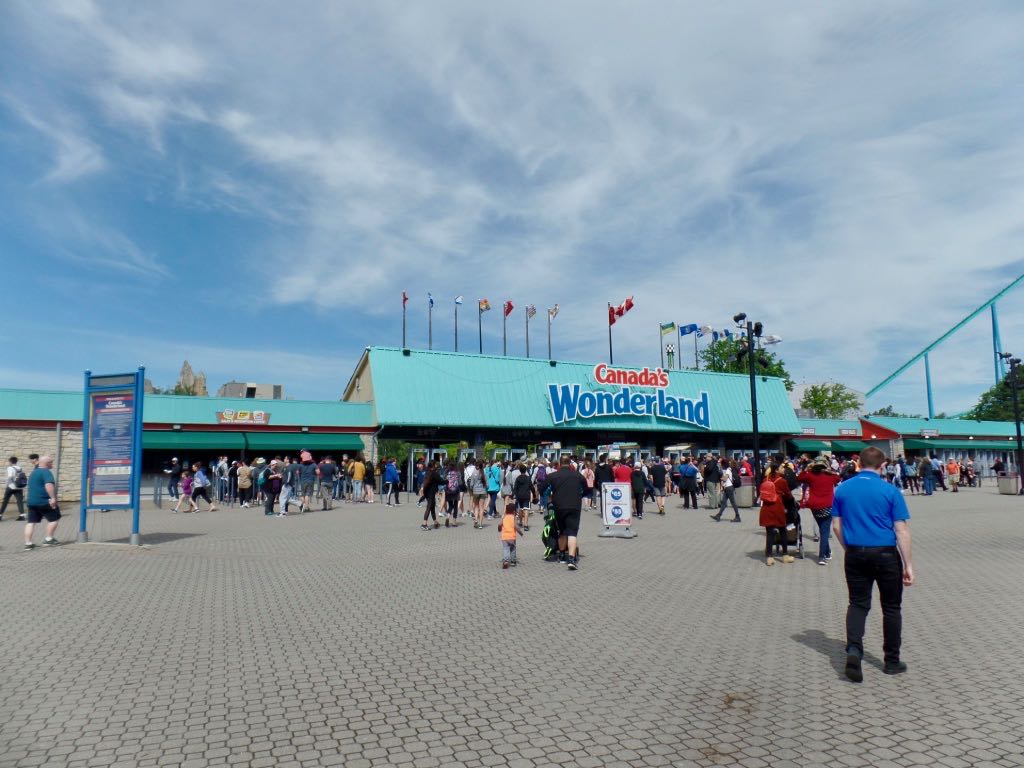 And here's the entrance to Canada's Wonderland, which still has more or less the look Cedar Point had earlier in the 2010s. 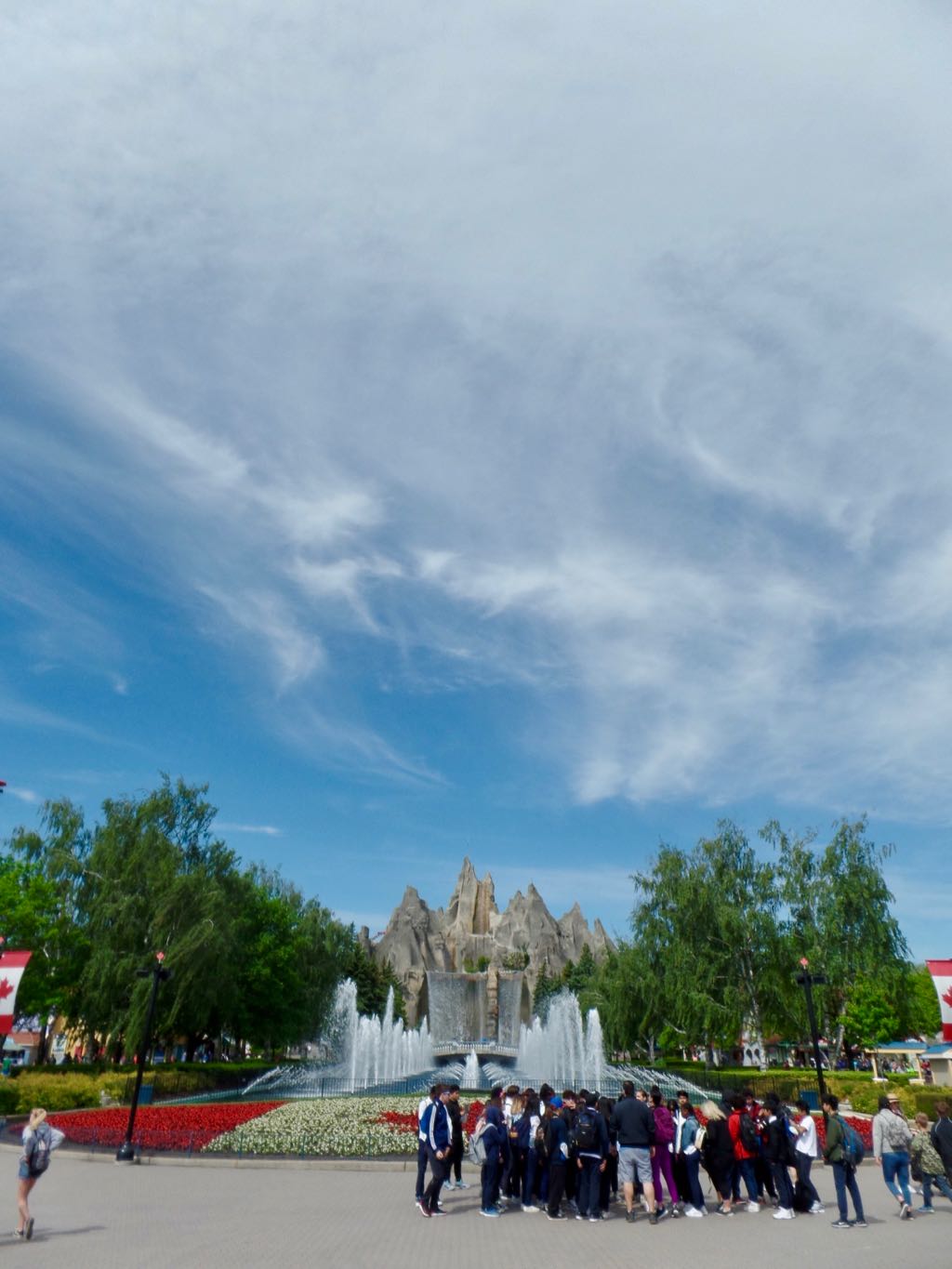 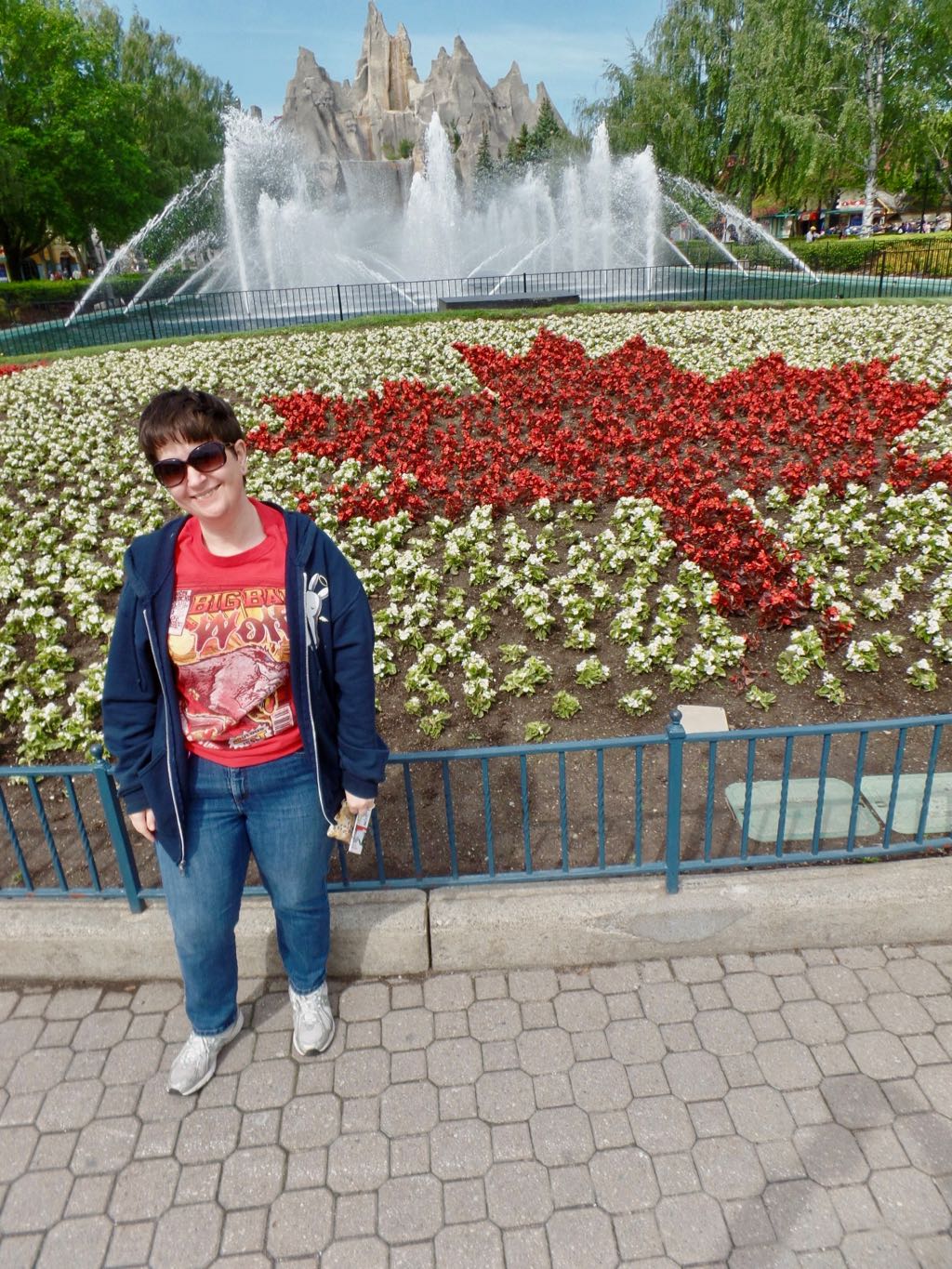 bunny_hugger posing in front of the floral Canadian flag and Wonder Mountain. 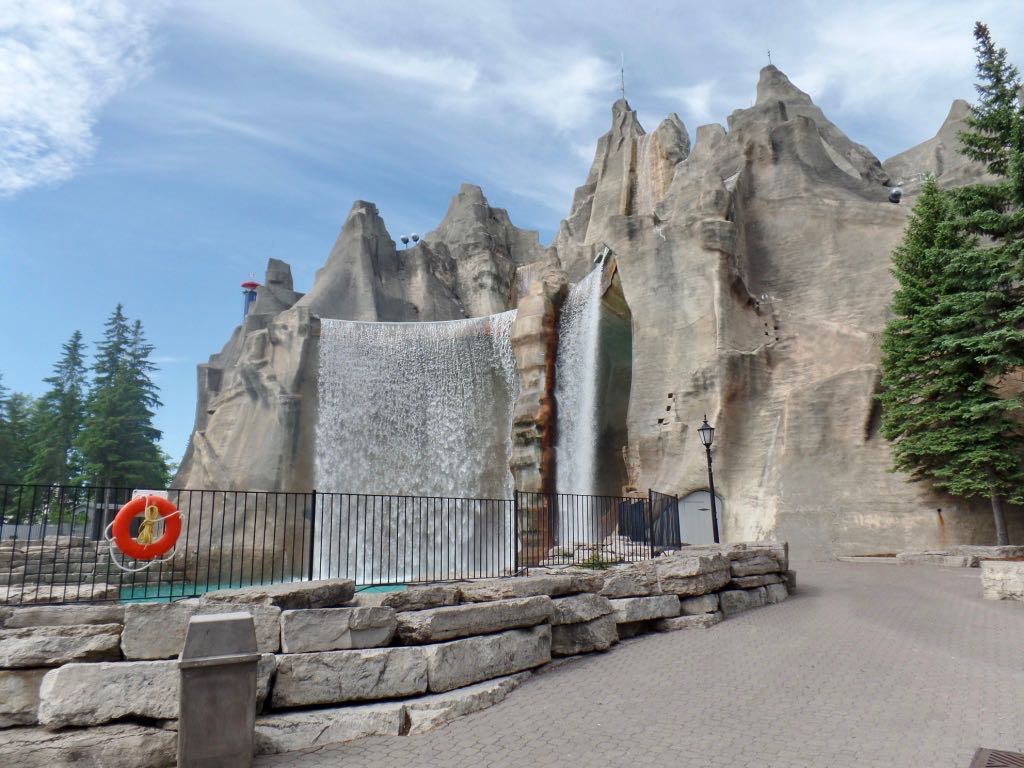 Coming up on Wonder Mountain, which has at least two levels of waterfall. 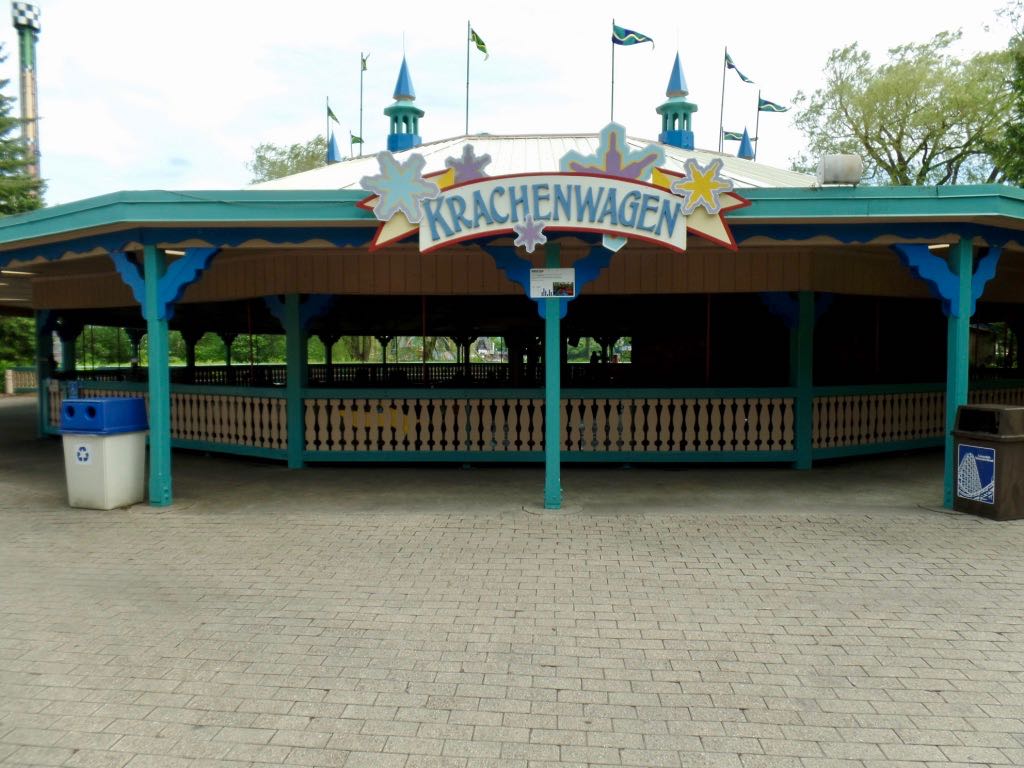 While we didn't ride the bumper cars you have to admit they've got a great name here. 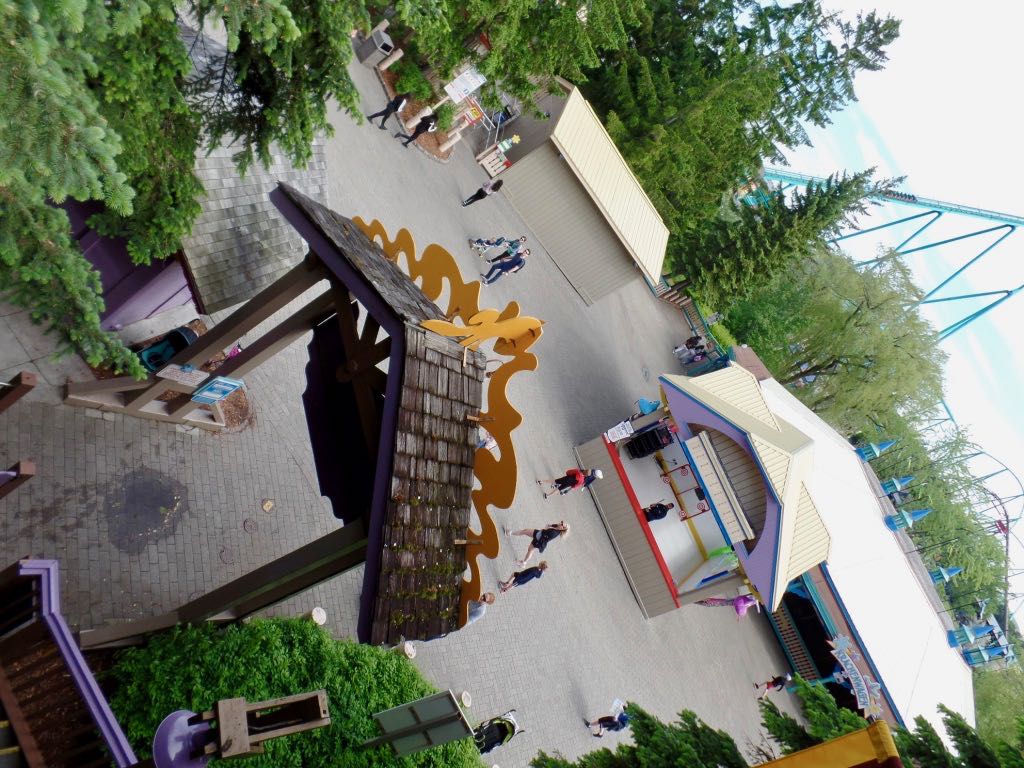 View of the park from the entrance to Thunder Run, an extremely popular roller coaster built into Wonder Mountain. 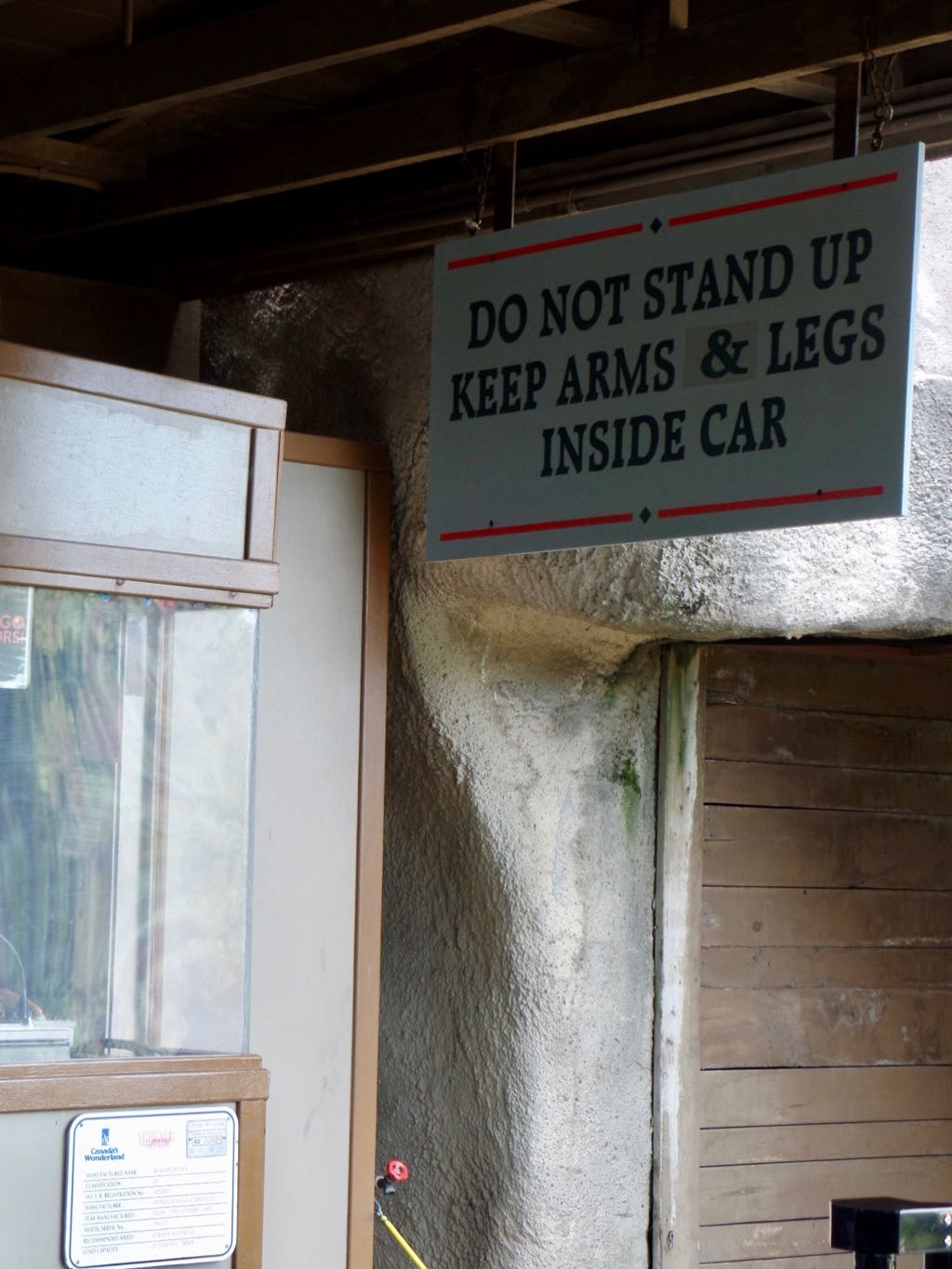 Warning sign at Thunder Run. The question: what did that sticker with the ampersand replace? 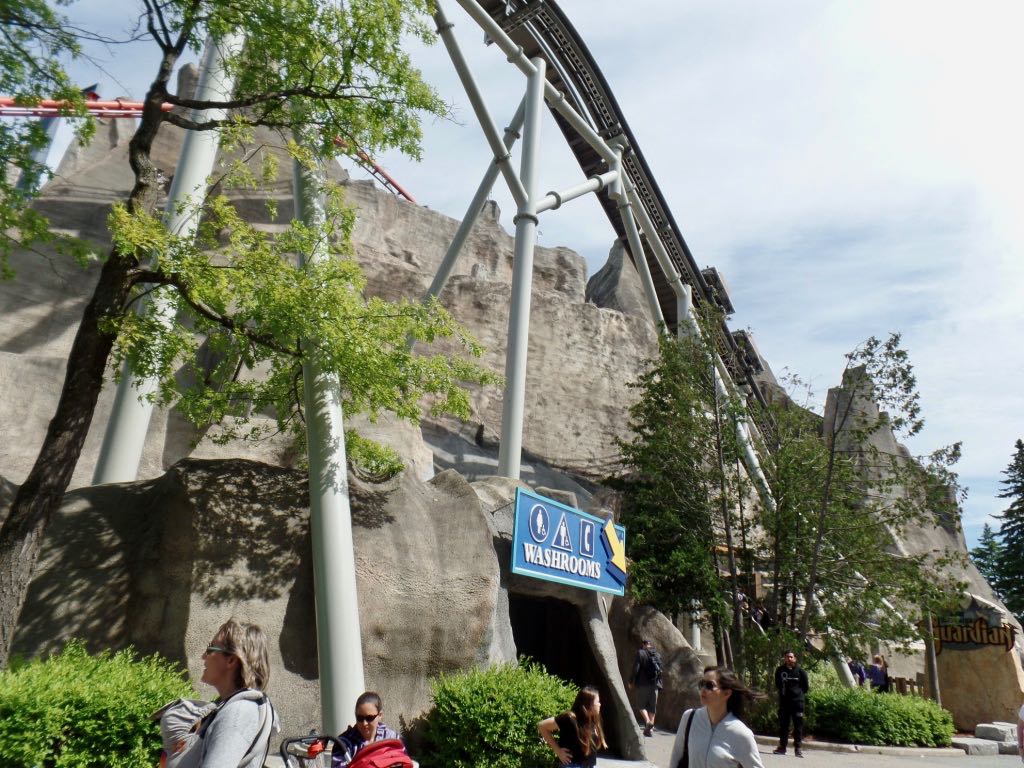 The other side of Wonder Mountain, which has always had bathrooms in it, and the lift hill for Wonder Mountain's Guardian, a hybrid roller coaster and interactive dark ride. 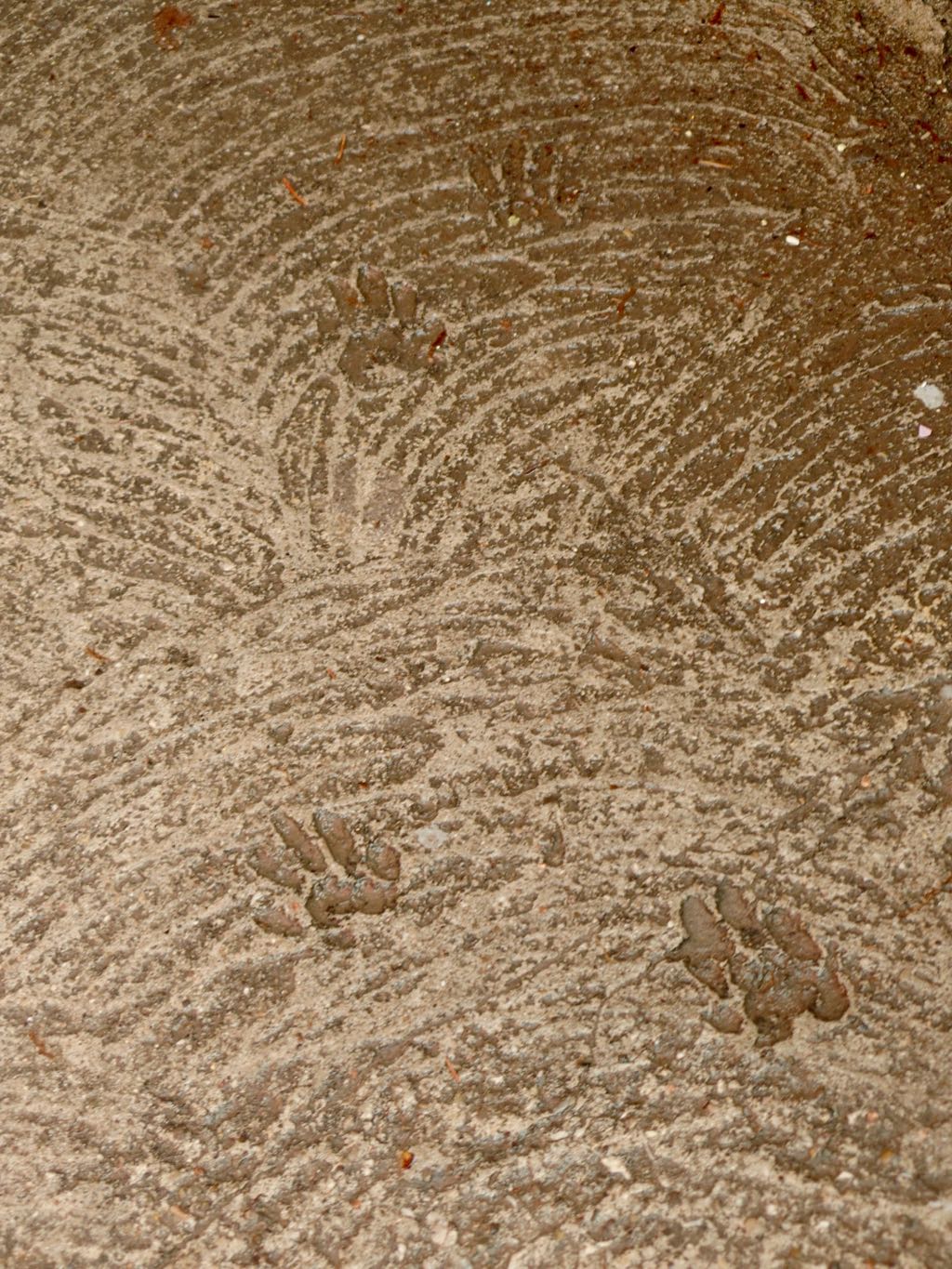 Animal tracks embedded in the Wonder Mountain cement. We debated whether they were legitimate or art-directed. 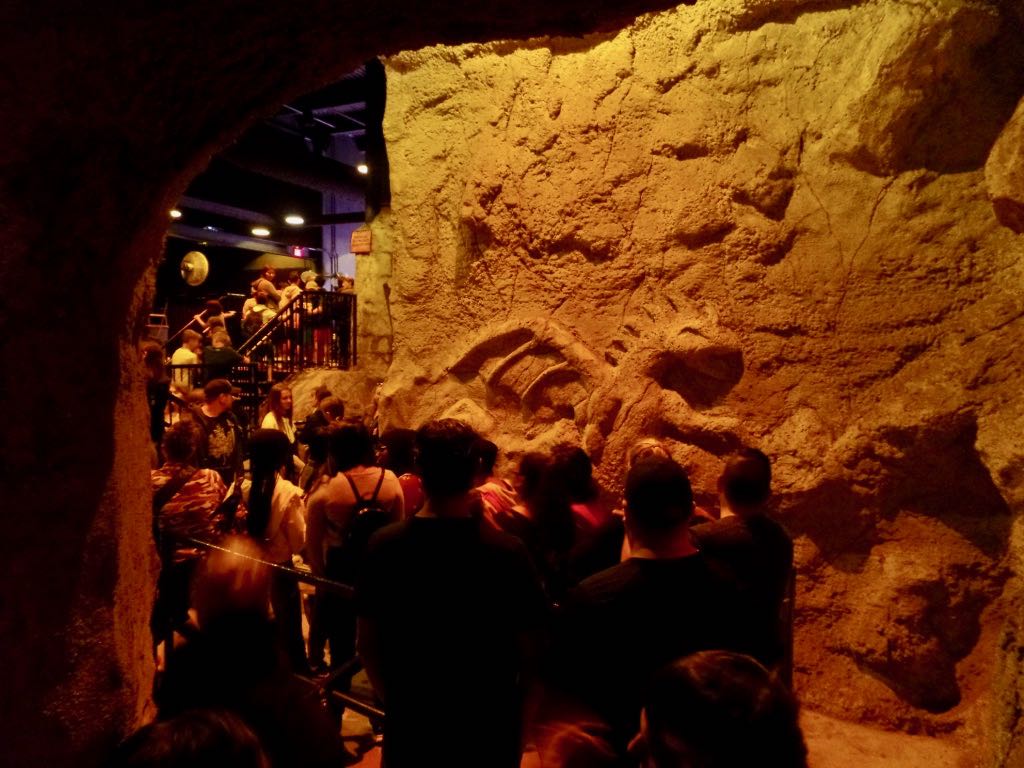 Queue for Wonder Mountain's Guardian, including a couple fossilized dragons, which is pretty cool.

Trivia: The first balloon ascent in New York City was an ``Aerostatic Ascension'' the 2nd of August, 1819, by Charles Guille, riding a hydrogen balloon and ending the show with a parachute jump. Source: The Bowery: The Strange History of New York's Oldest Street, Stephen Paul DeVillo.

PS: Using my A to Z Archives: Grammar for those interested in reading older stuff on my mathematics blog.