All my life, compromise on wings of resignation

While giving our quarantined fish the last of his PraziPro I noticed something in my periphery. It was a fish.

A baby fish, about the length of a fingernail, and swimming in the left tank. This is one of the tanks we use for wintering the fish over, and we had never fully emptied it. We'd been drawing water from it to change the quarantine tank's water, rather than let it go wholly to waste. And that it's been so long --- the quarantine tank's water was perfect the last several measurements --- gave the baby fish time and space enough to grow big enough for me to see.

There's at least one more baby fish in there too, about half its sibling's size.

So, we're startled, of course. We did not imagine the fish got up to any fish sex while they were inside, for one; we would not have imagined the water clean enough for them, or for the water to have warmed enough (the signal that it's fish sex season). It forces us to wonder if this might happen every year and it's just a bunch of weird circumstances, including some fish illnesses that made us delay returning everybody to the pond, that let us discover it. This may complicate closing down the basement fish tanks in future years.

For this year, though? We're just delighted to have discovered baby fish, in a tank we had stopped paying attention to, that wasn't even getting filtration or water tests or food.

Their water, now, we've checked and it's ... okay. Could be better. I got some coon's-tail plants from the pond and put it in, so they have something to eat and to hide within and to soak up the many nitrogen compounds of a closed tank. And ... just ... gosh. Who would have imagined?

And now I bring you back to the United States, in June of 2019, and the next park we visited in upstate New York. This was Fantasy Island, on Grand Island near Buffalo. It was a cool, rainy day, and we chose the park because it was a low-priority one compared to Seabreeze, so if any park would have its day cut short, this was the better. It turned out both parks got their days cut short. And that this would be the last season for Fantasy Island as we know it; owner Apex Park shut it down and sold every ride but the wooden roller coaster. There's a group near Buffalo trying to put together a plan to buy the grounds and rebuild a park there and I wish them luck, but for now? Here's our lone trip to Fantasy Island As It Was: 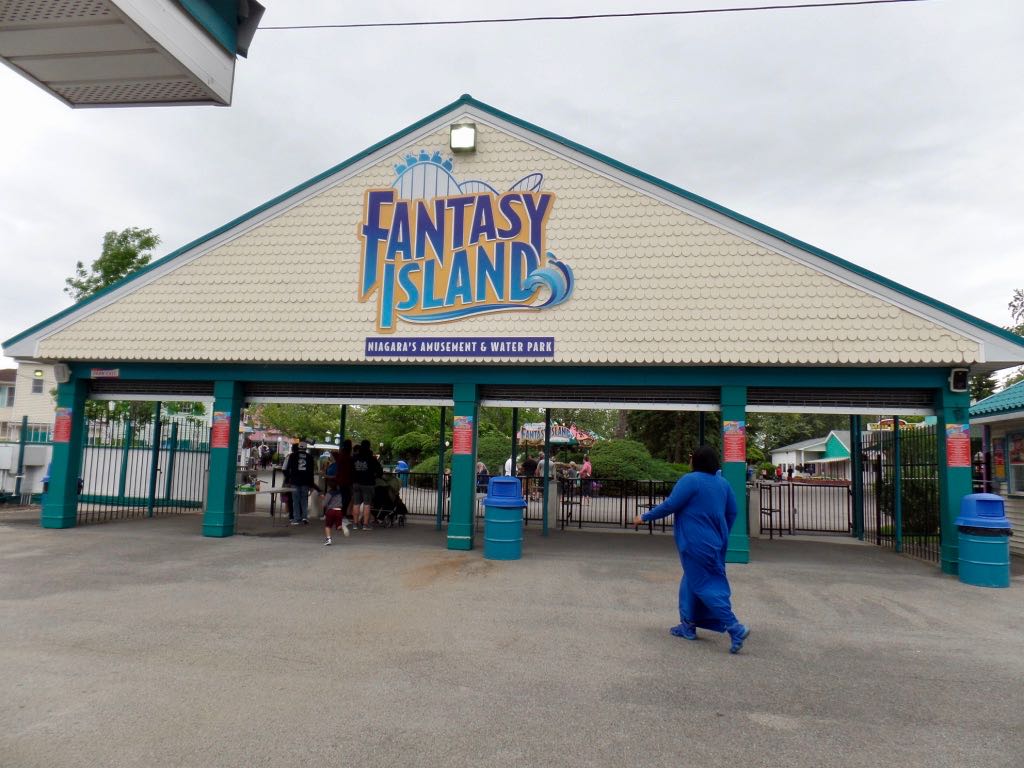 Fantasy Island's entrance. You can see other people more ready for the rain than we were. 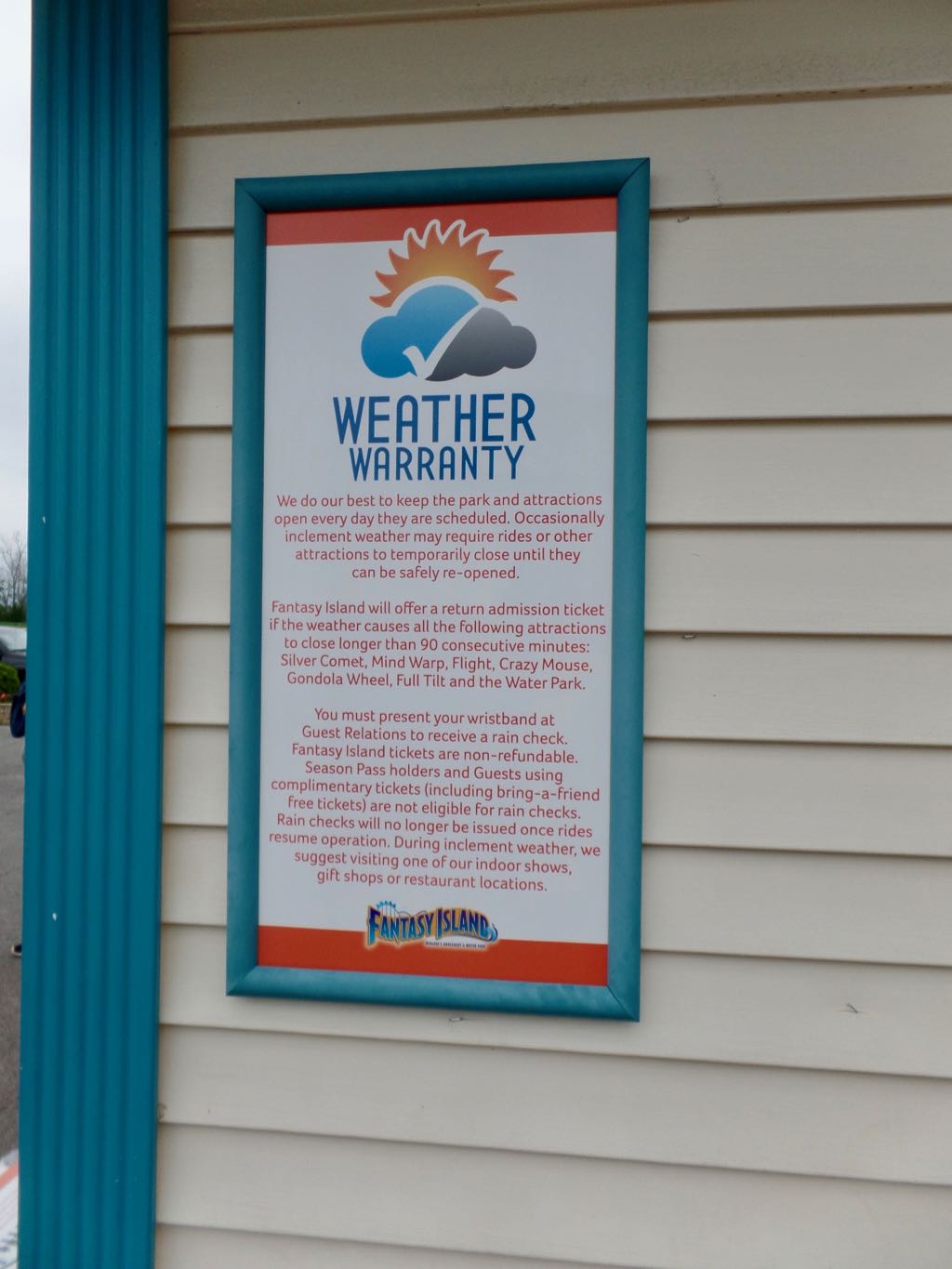 Something compelled me to take a picture of the Weather Warranty. Possibly just that they gave it a more fun name than ``rain check policy''. 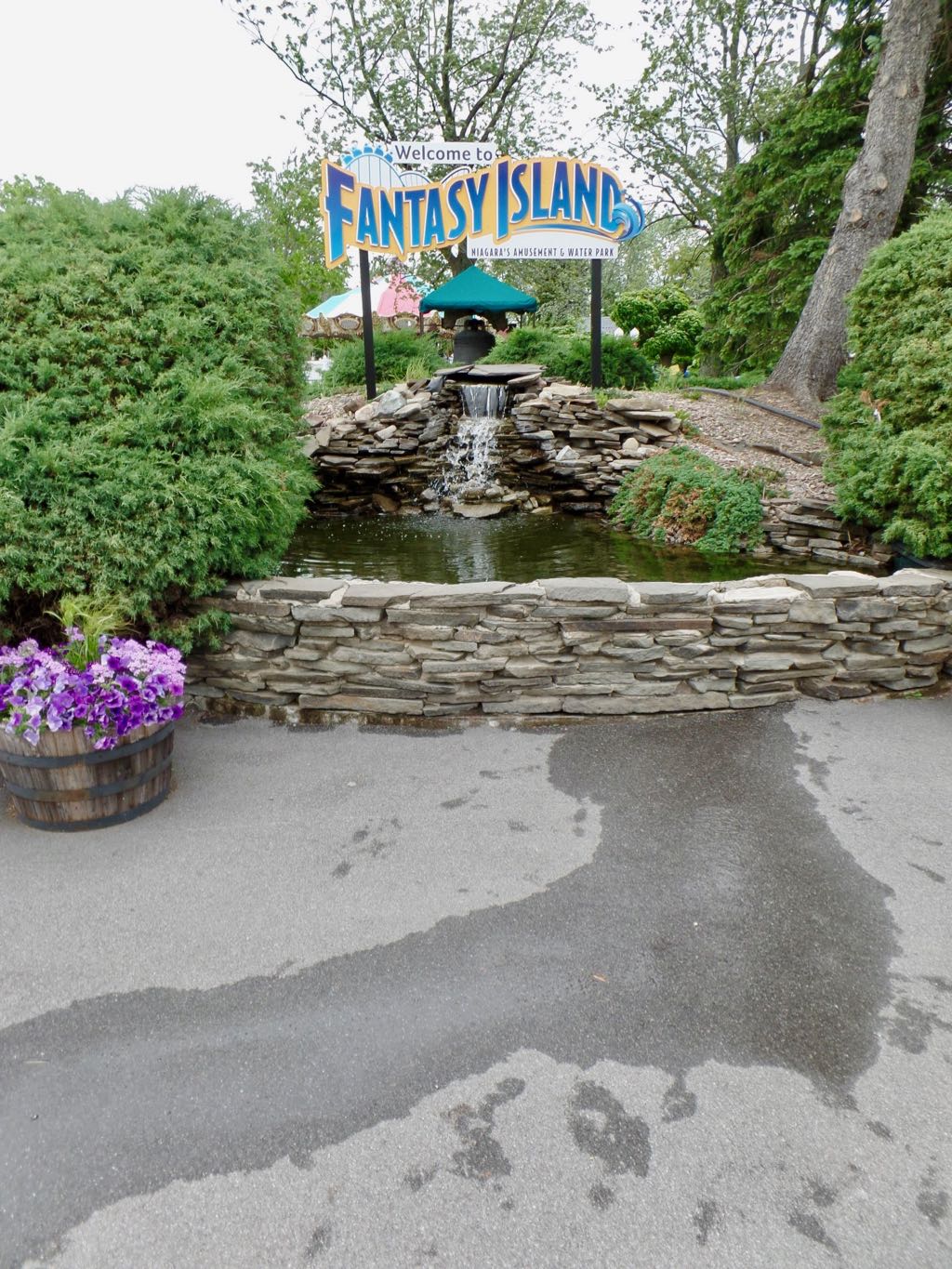 The fountain at the front of Fantasy Island's midway, which I'm sure wasn't leaking more than they expected. 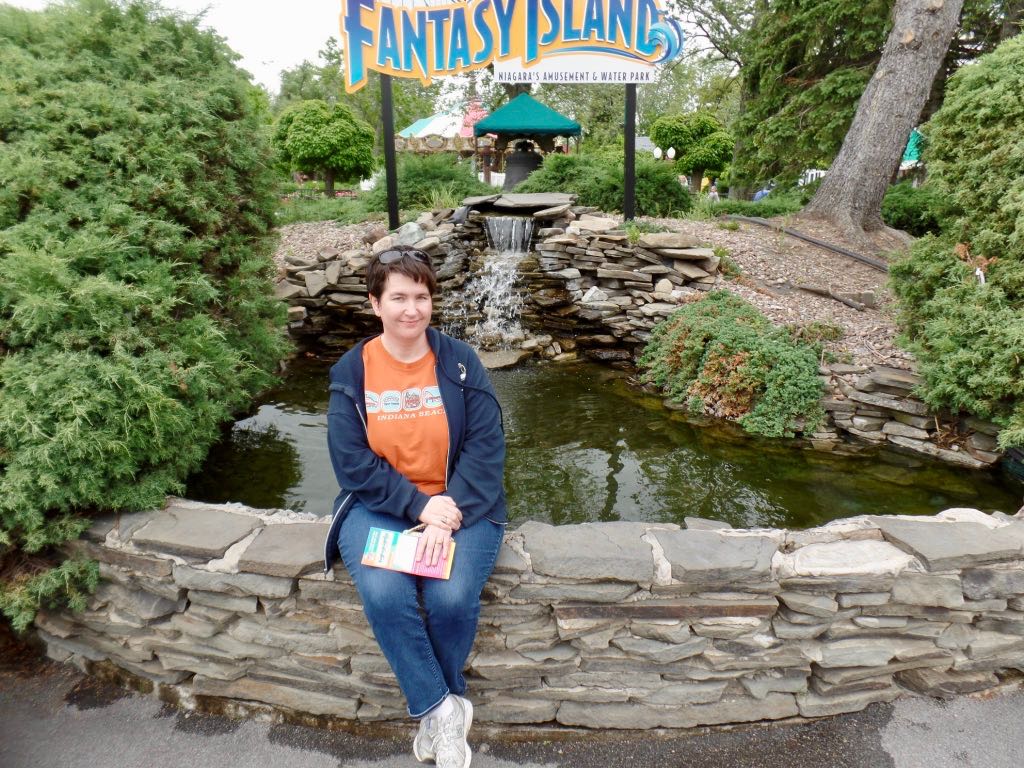 Sweet picture of a dear

bunny_hugger at the fountain. She's wearing an Indiana Beach T-shirt, I think because she remembered Indiana Beach had the same owner. Later in the day a park employee spotted her shirt and came to talk with us partly about Indiana Beach. (Apex Parks closed Indiana Beach over the winter, but a local group bought it out and reopened it, even though that's a terrible thing to do in the pandemic summer.) 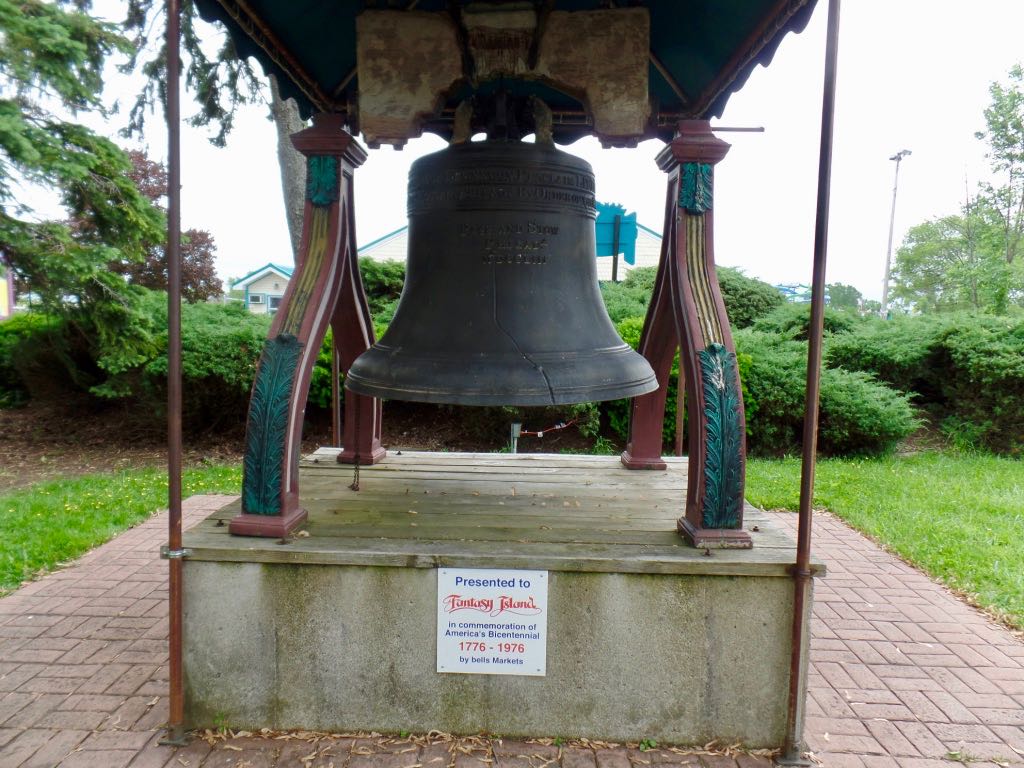 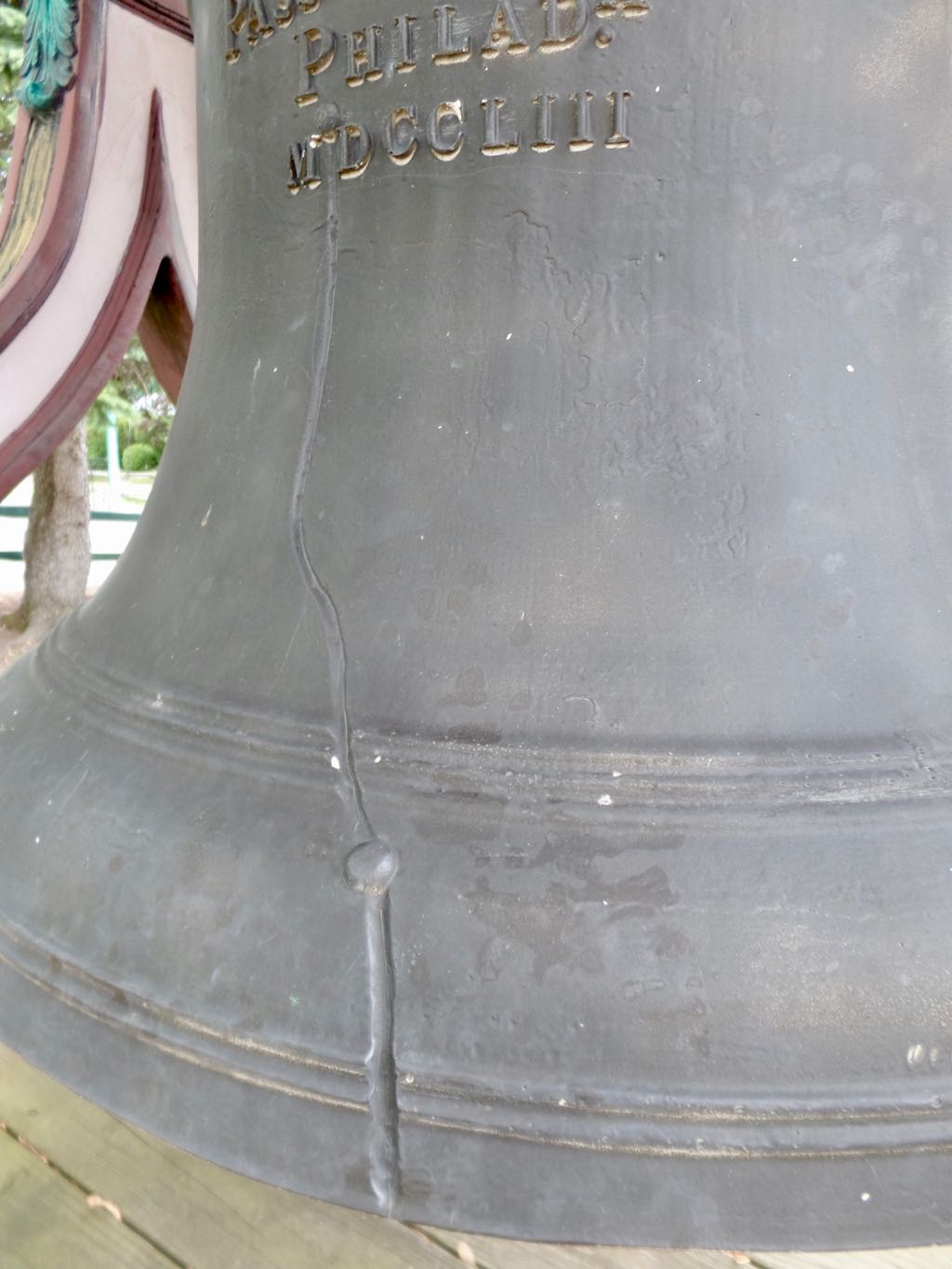 The replica Liberty Bell does not have a real crack, just the illusion of one. 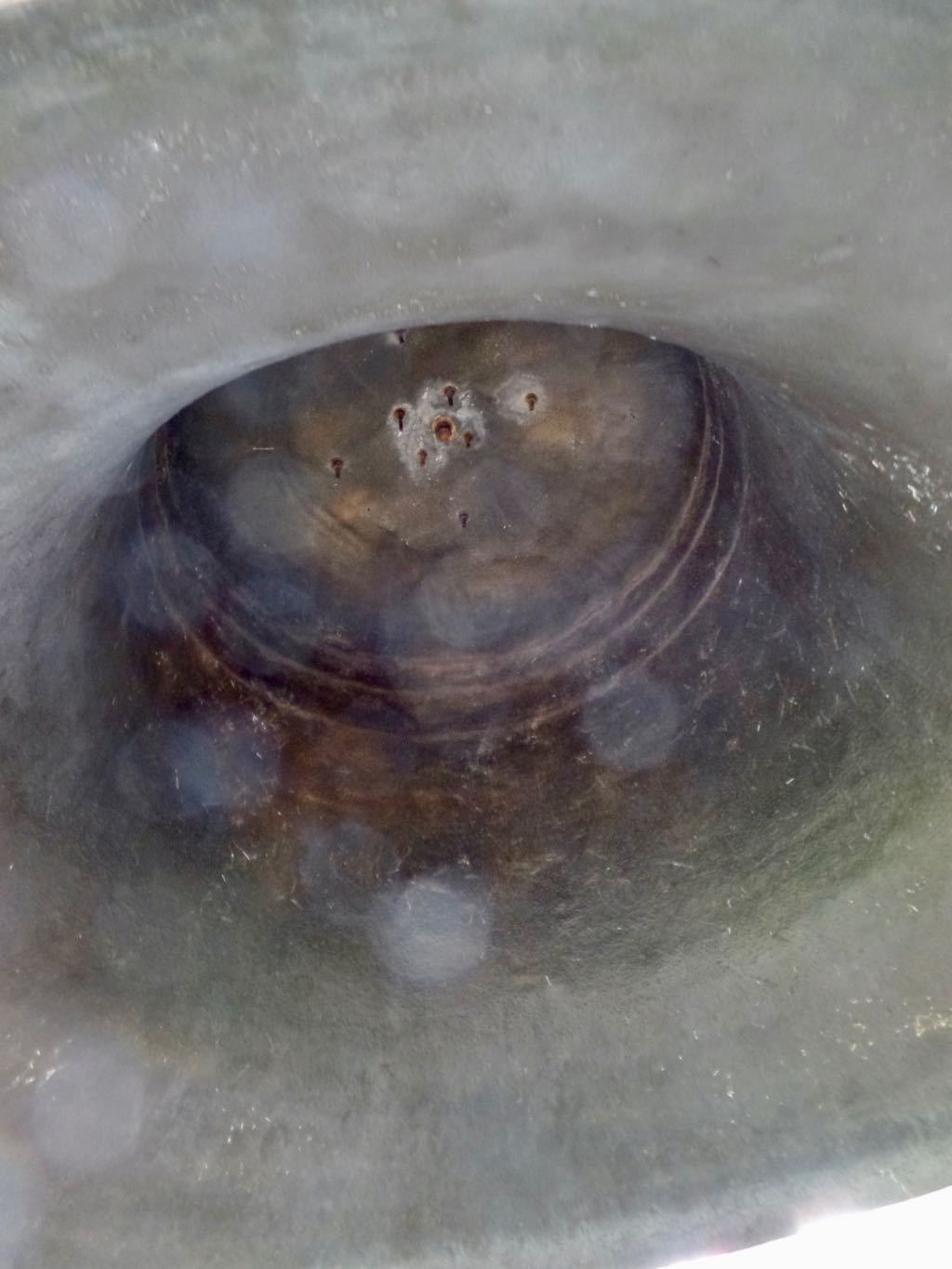 Fantasy Island's replica Liberty Bell also does not have a clapper. 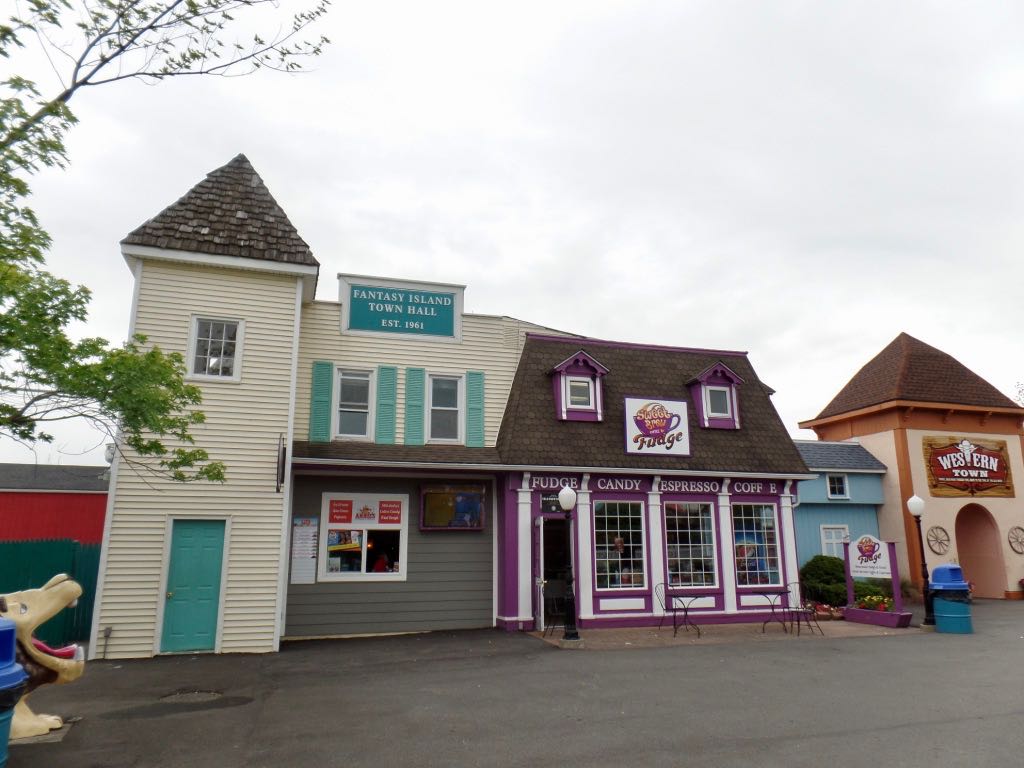 The entrance midway of Fantasy Island, with the Town Hall (the customer service center), a candy-and-coffee place, and the entrance to the Western theme area. 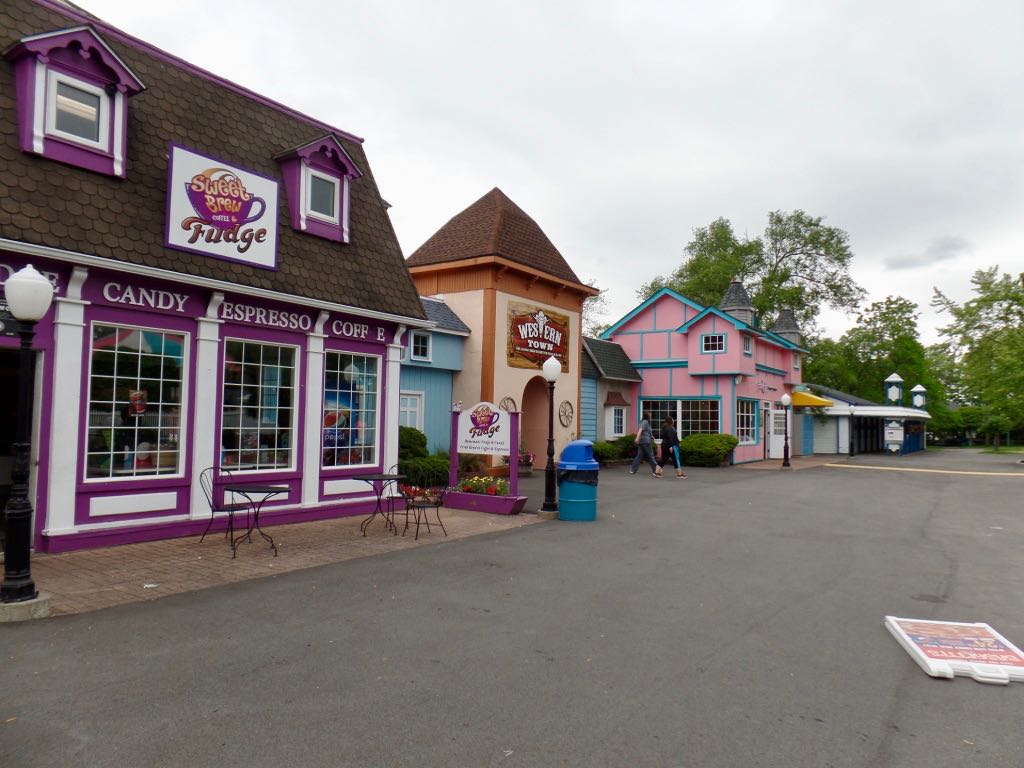 A look down some more of the entrance midway and yeah, one of the store offer signs fell over in the breeze. 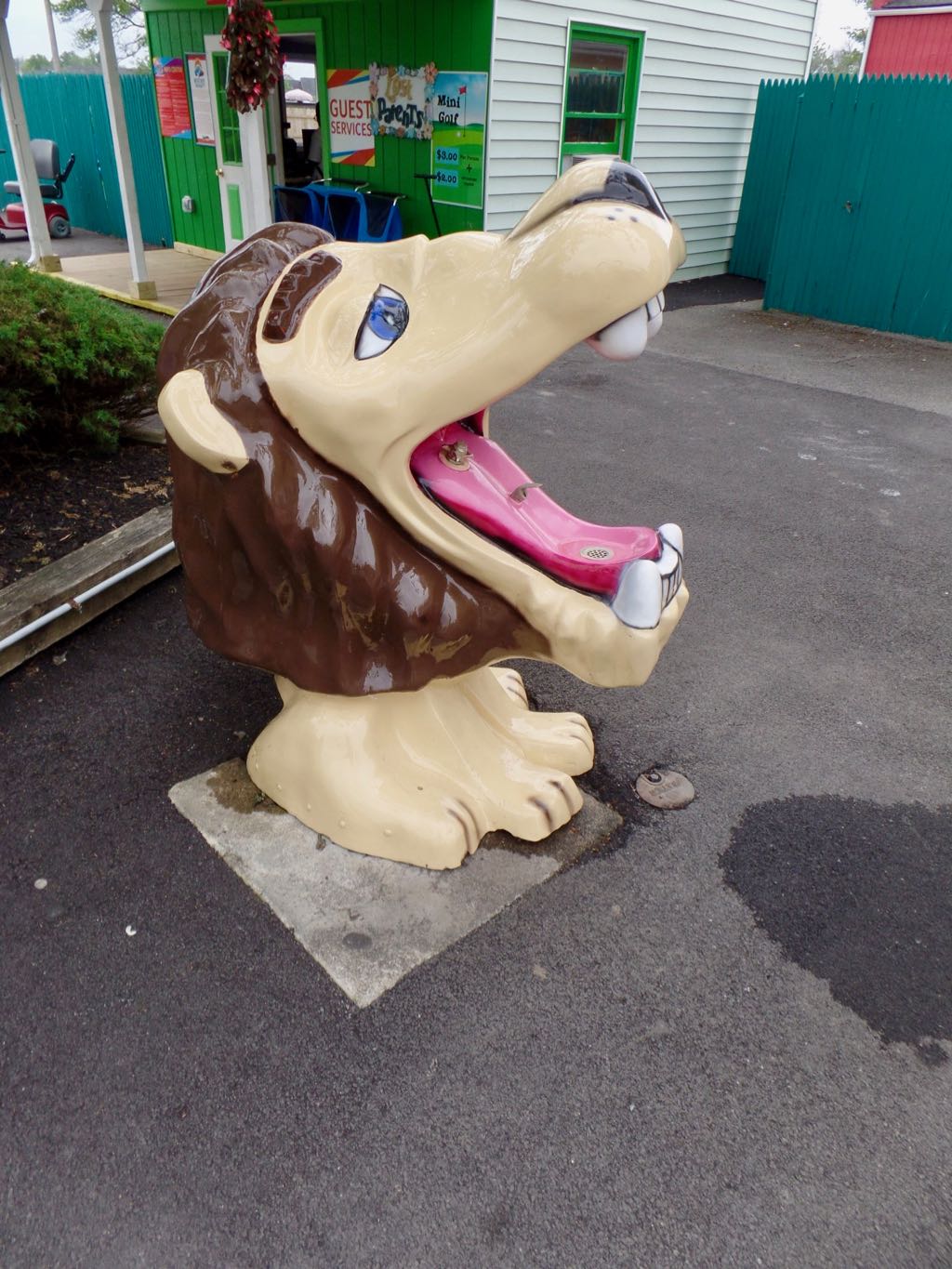 Lion-head water fountain that really has a kinda weird anatomy when you look at it seriously like this. 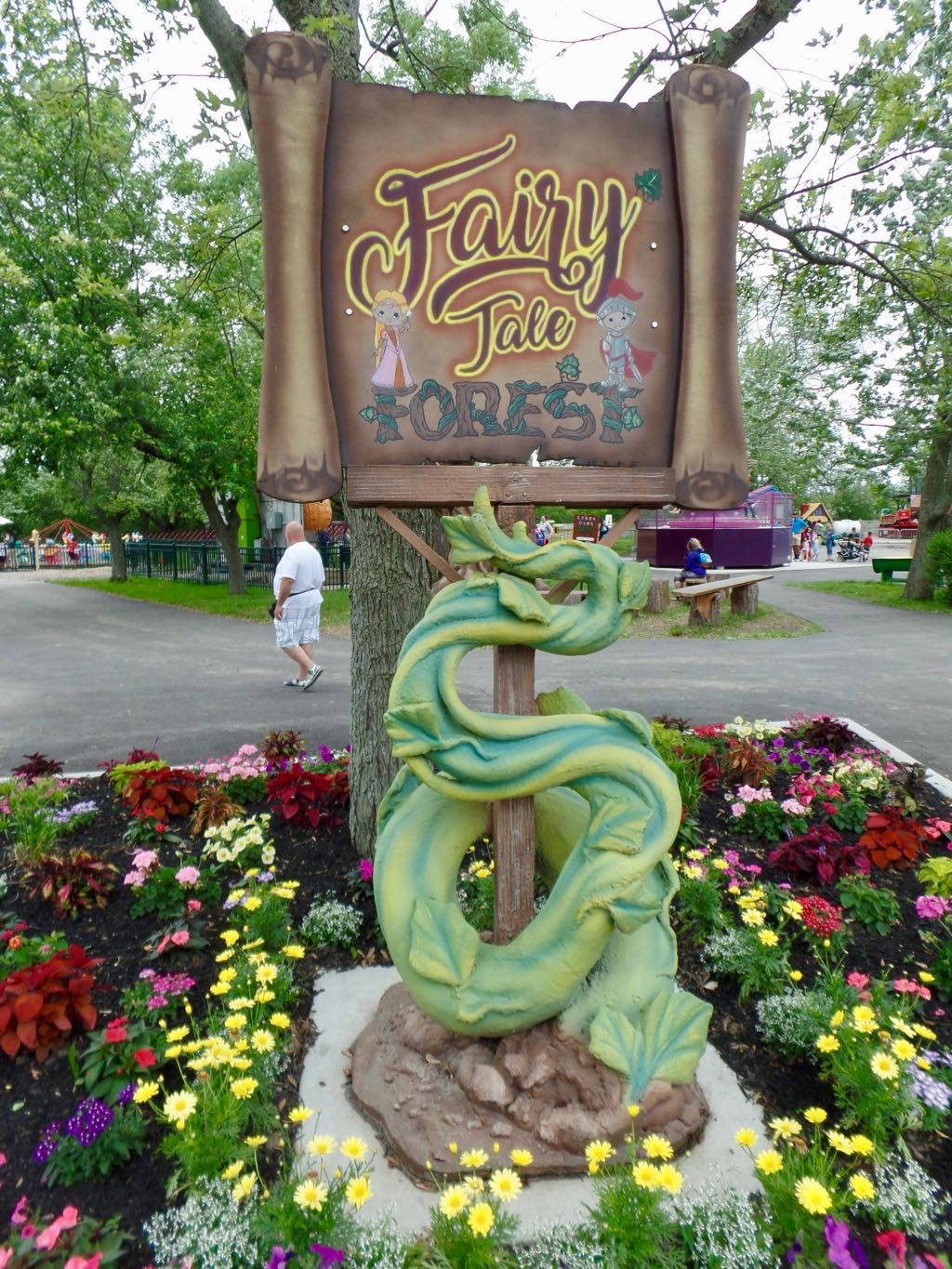 Fantasy Island had this nice Fairy Tale Forest and we looked forward to having time there. 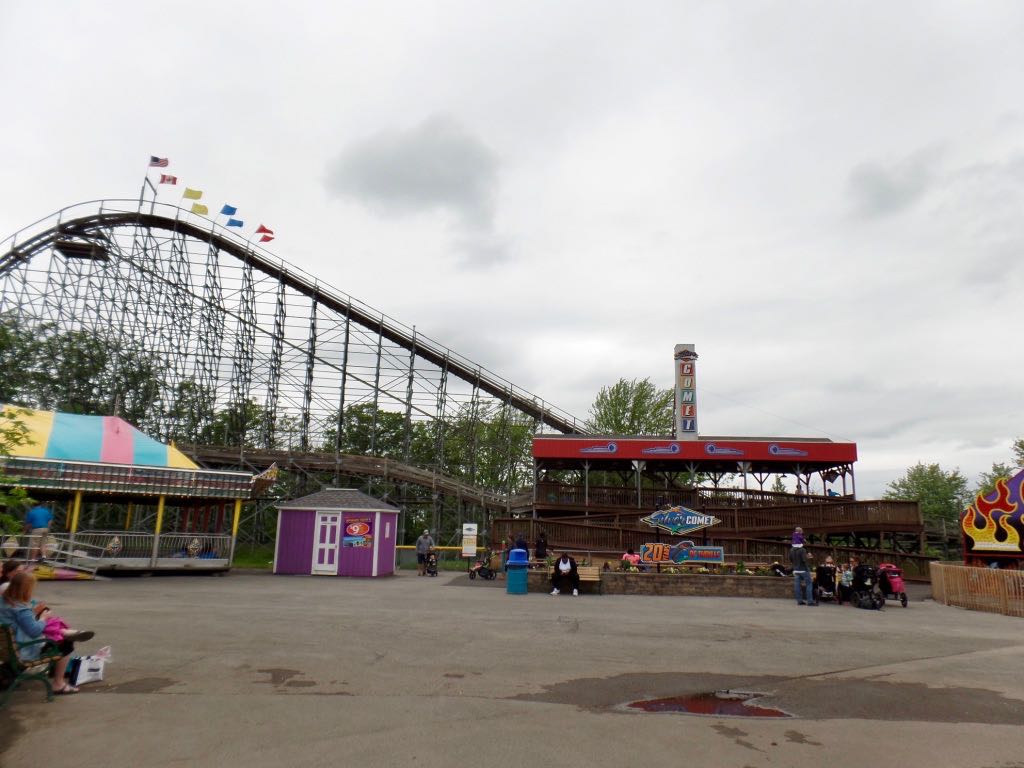 Silver Comet! The big wooden roller coaster, and the thing we came to this park particularly for. It's also, as of 2020, the only ride left on the grounds.

Trivia: The first significant general conference among steamship companies (for establishing uniform freight rates and abolishing preferential treatments) was the Calcutta Conference of 1875. Source: Box Boats: How Container Ships Changed the World, Brian J Cudahy. (Cudahy doesn't discuss what they agreed to in 1875 and I find it harder than I would like to get specifics myself.)

PS: Using my A to Z Archives: Hypersphere, a note about an interesting set of surfaces.