Baby fish update: there's at least four of them downstairs.

bunny_hugger fed them a dollop of the frozen mealworm food we'd gotten as emergency quarantine rations and we'll see if they can grow into something safe to either put in the pond or have around when it's time to bring everybody in come October.

And to catch you up on the story strips, here's What's Going On In Dick Tracy? Who is Dethany and why does she look like a villain? May - August 2020 in recap.

So now let's get back to Fantasy Island, in our June 2019 visit to the park. 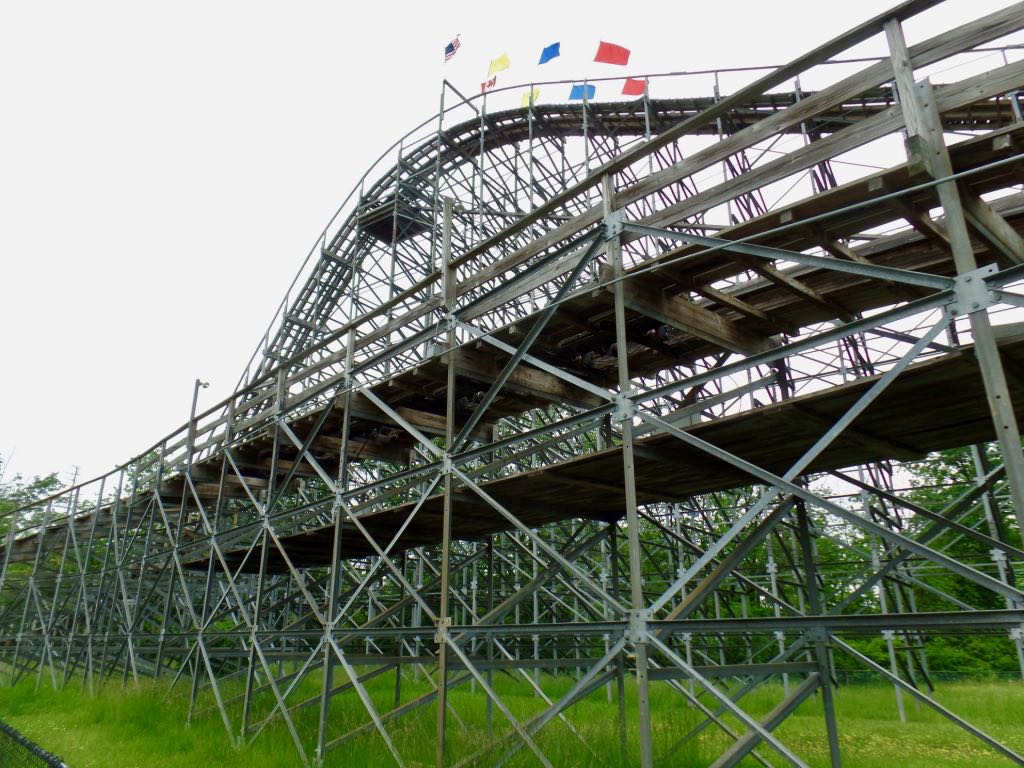 Silver Comet's lift hill, and return leg of the roller coaster. The entry queue goes underneath the coaster so you get some good angles. Note the United States and Canada flags, much like those at the lift hill for Ravine Flyer II at Waldameer, also on a Great Lake. And you see why the park was named Two Flags Over Niagara Fun Park for surprisingly long considering they weren't sued out of existence for it. 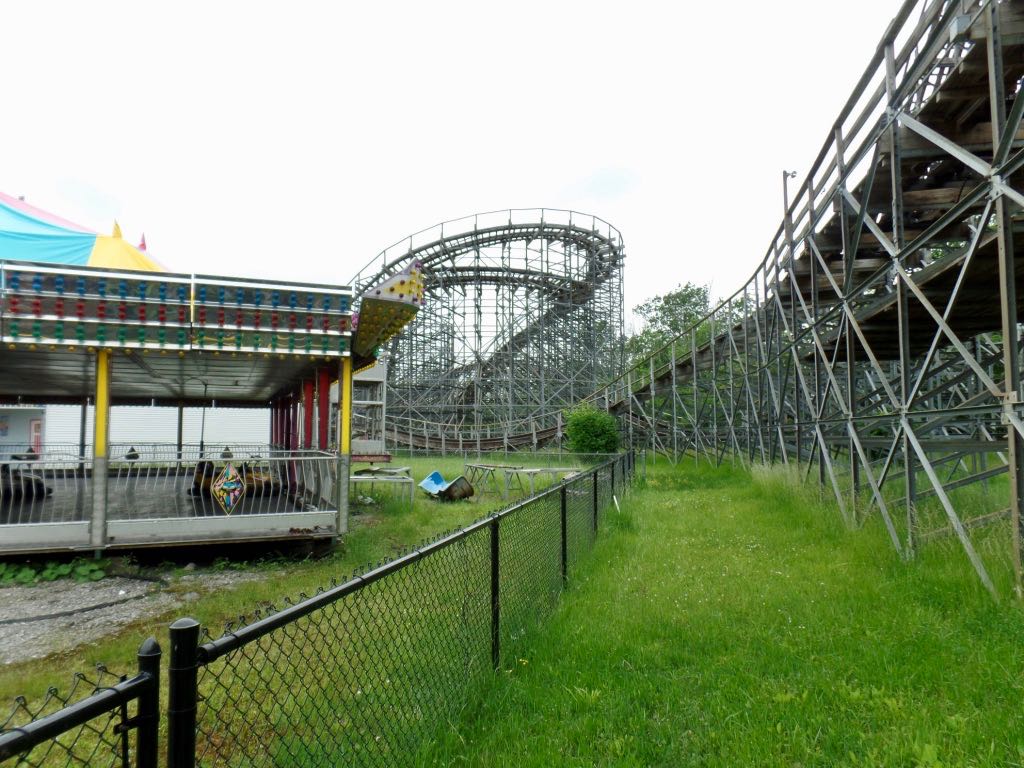 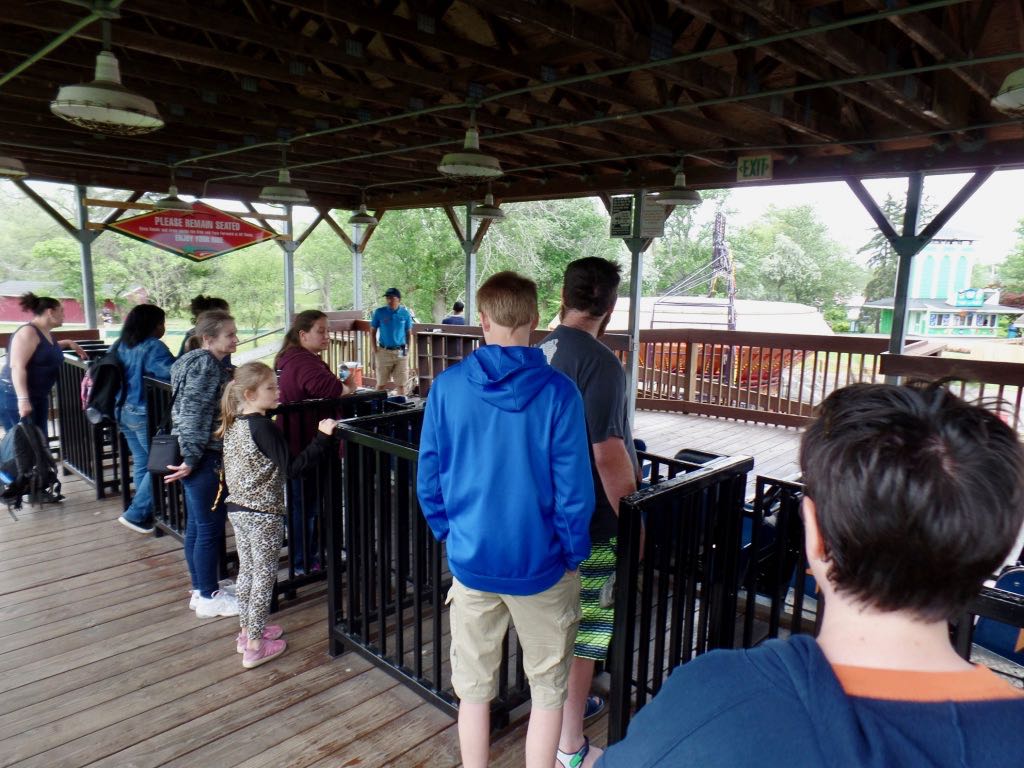 Waiting for the train. I believe we waited for a front-seat ride for our first experience, trusting that the rain would hold out that long at least. And we succeeded, joking that now, we could leave. 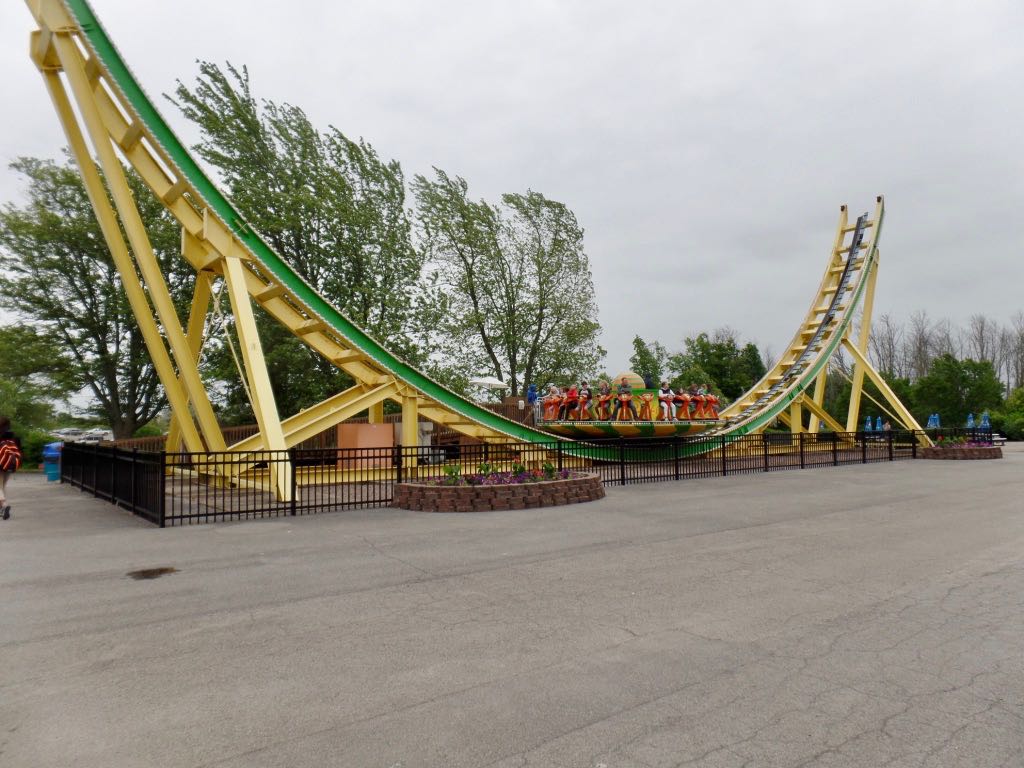 bunny_hugger was not going to be up for riding. You can see how breezy it was. 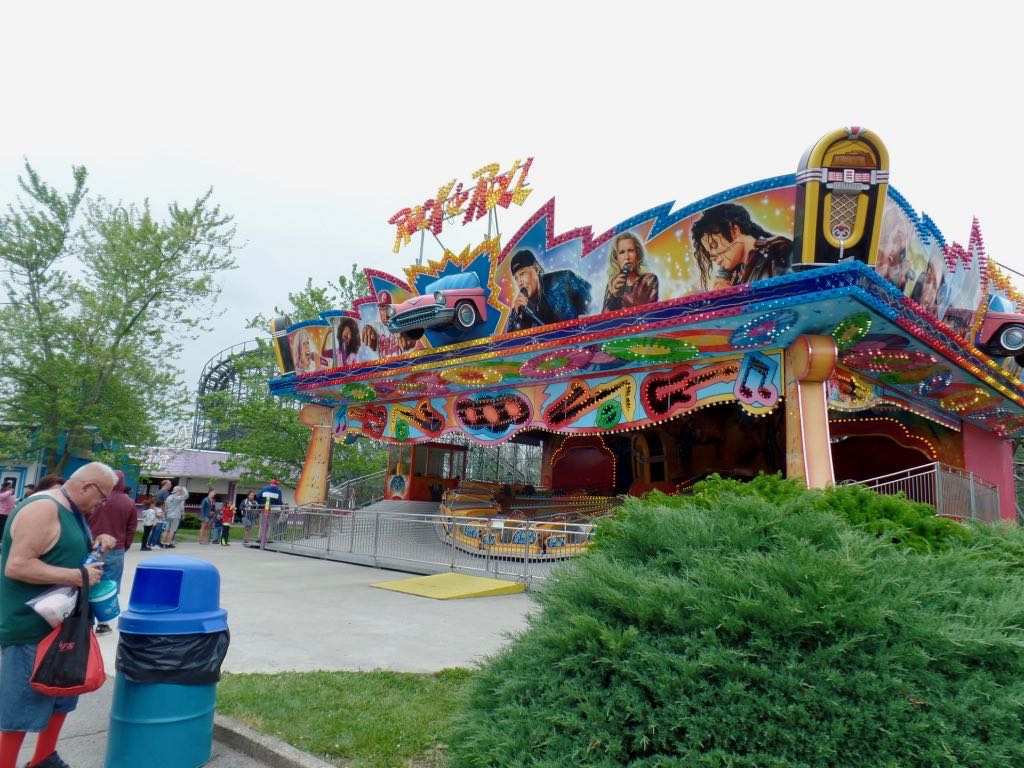 Looking down the westernmost end of the park, with a couple of the pavilions and rentable space off to the left. The drop tower, wild mouse, and Ferris wheel are off in the distance. 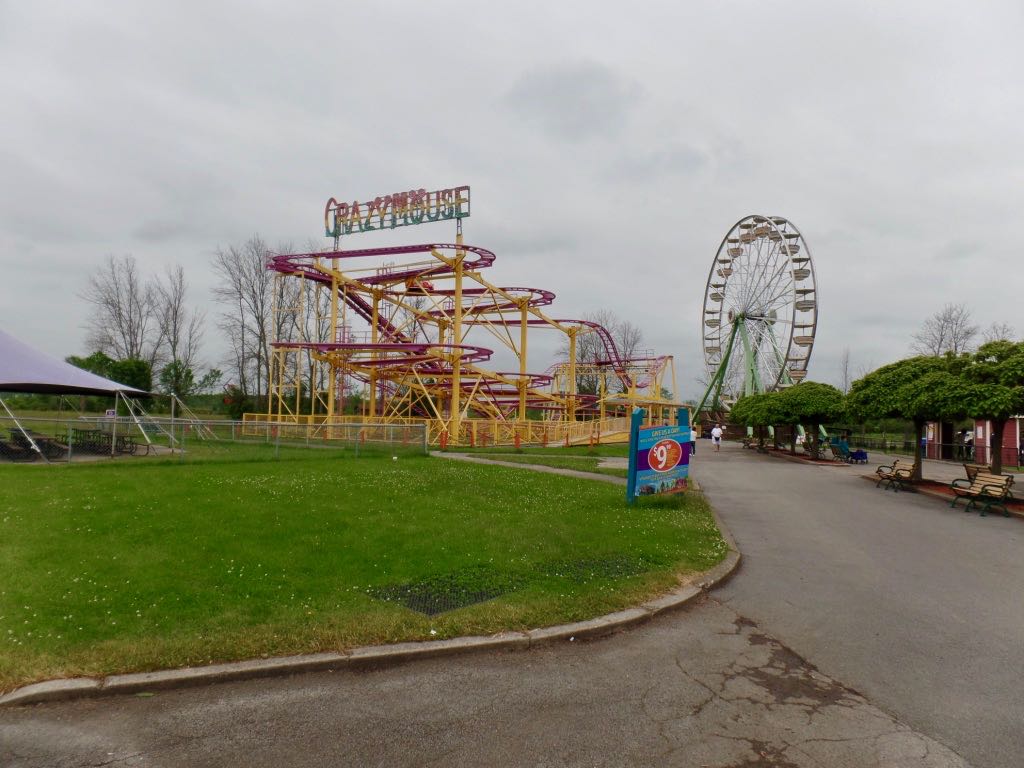 The Crazy Mouse and the Ferris Wheel, far off. They're pretty close to a spur of the Thruway, that you can see from the top of the rides. 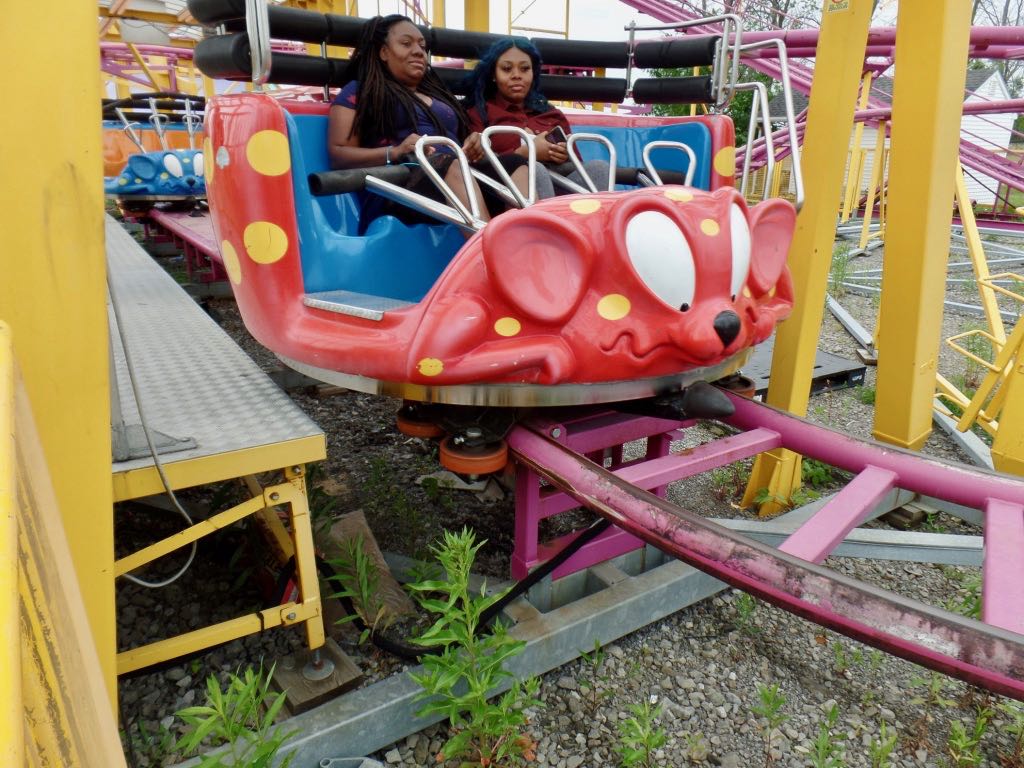 The Crazy Mouse had a warning sign that in the weather they might need to send out groups of four, no matter what, but they didn't need to. It's the same model spinning wild mouse as at DelGrosso's and as the Exterminator at Kennywood, and the Raton Logo at La Feria in Mexico City. 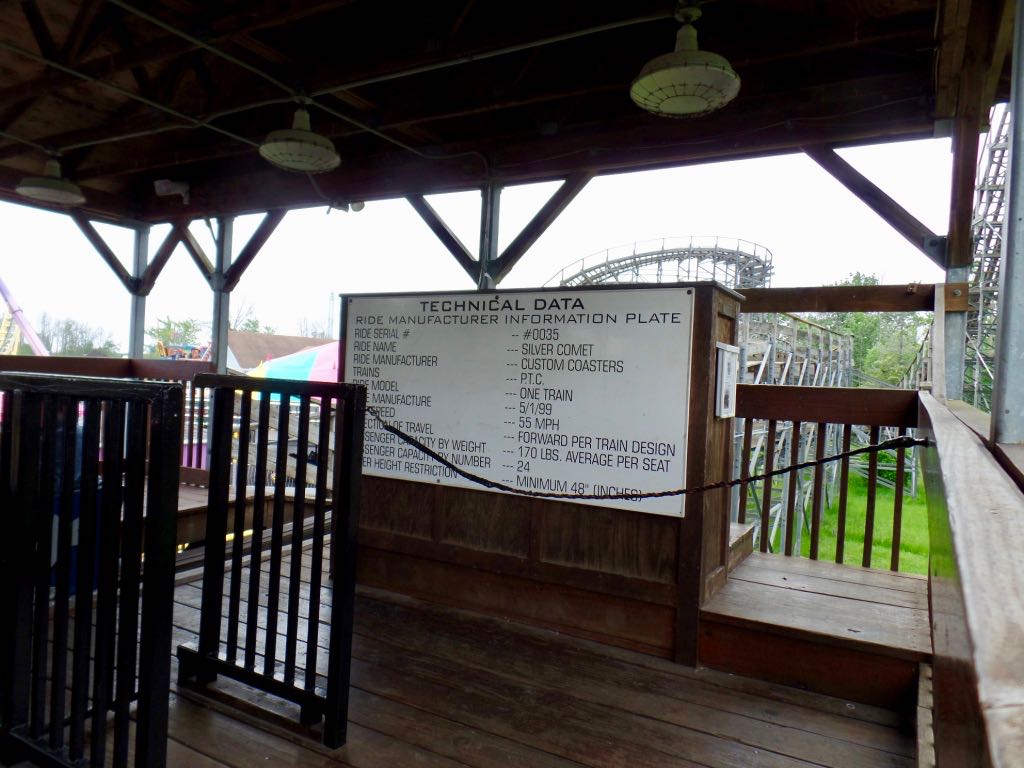 Back to Silver Comet for another ride, though! And here's the maker's plate describing important facts like it's supposed to run forward. (There used to be a fad for setting a train facing backwards, which runs fine but that parks have gotten shy about.) 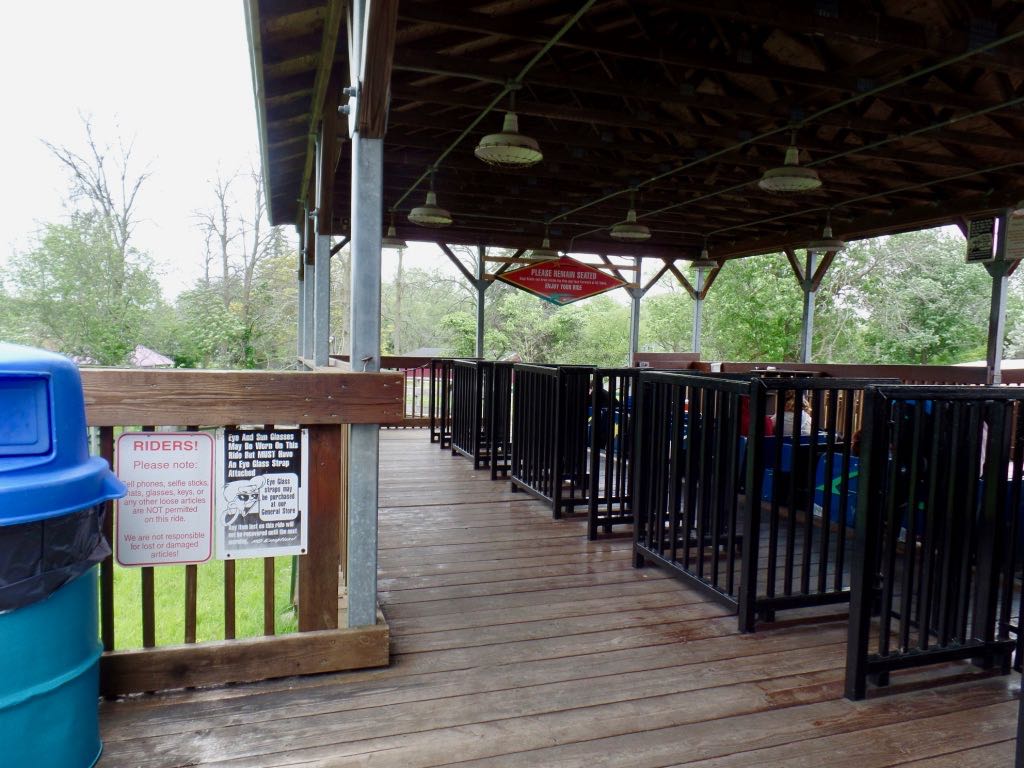 Another look at the Silver Comet launch station, along with signs warning about stuff you should not have on the coaster, and how you need eyeglass straps and whatnot. 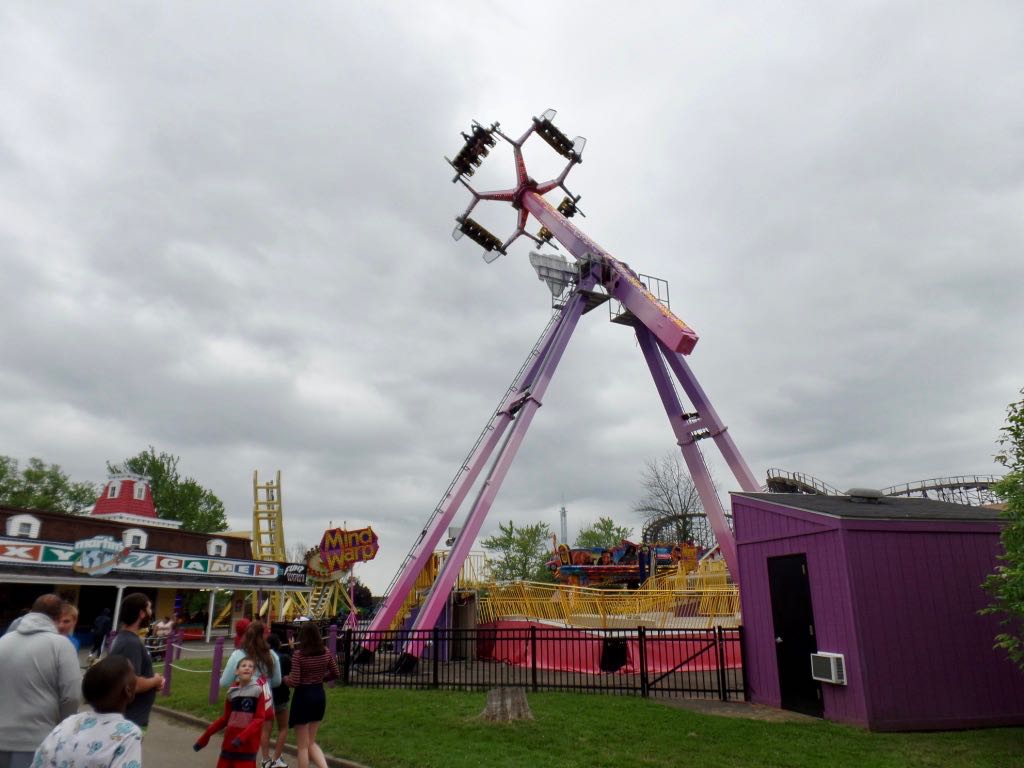 Claw ride in the middle of its swing. Also something that's not really 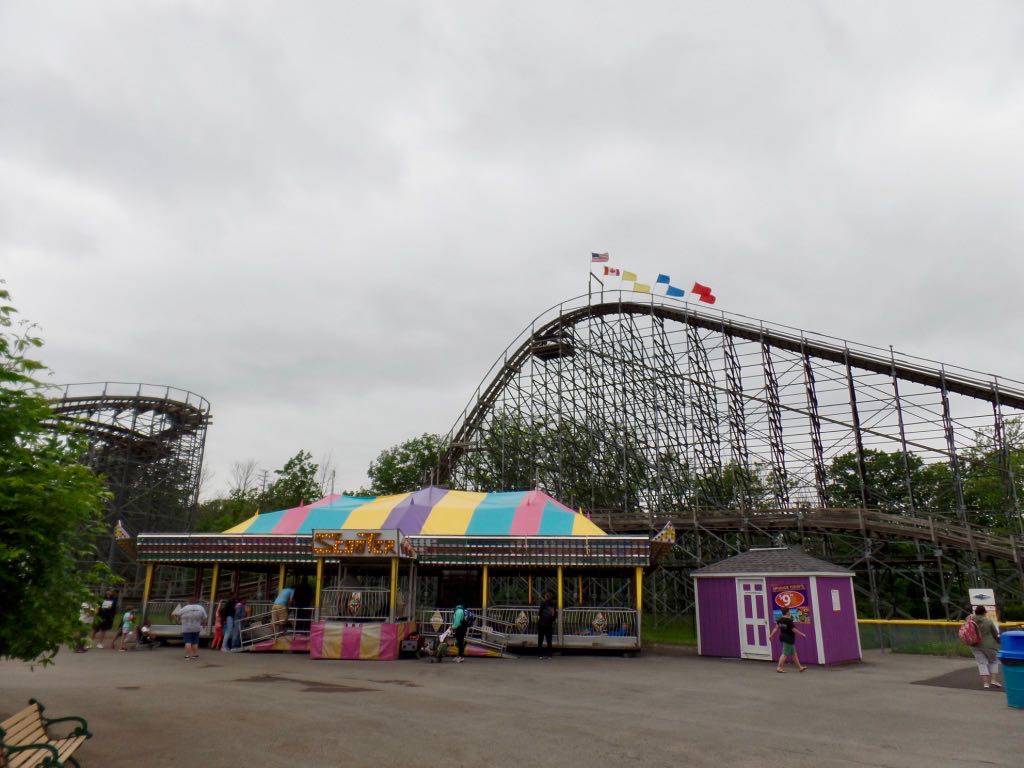 Silver Comet again, but also a look at the bumper car ride, Scooter. This was part of Martin DiPietro's travelling carnival before he bought the park and renamed it Martin's Fantasy Island. 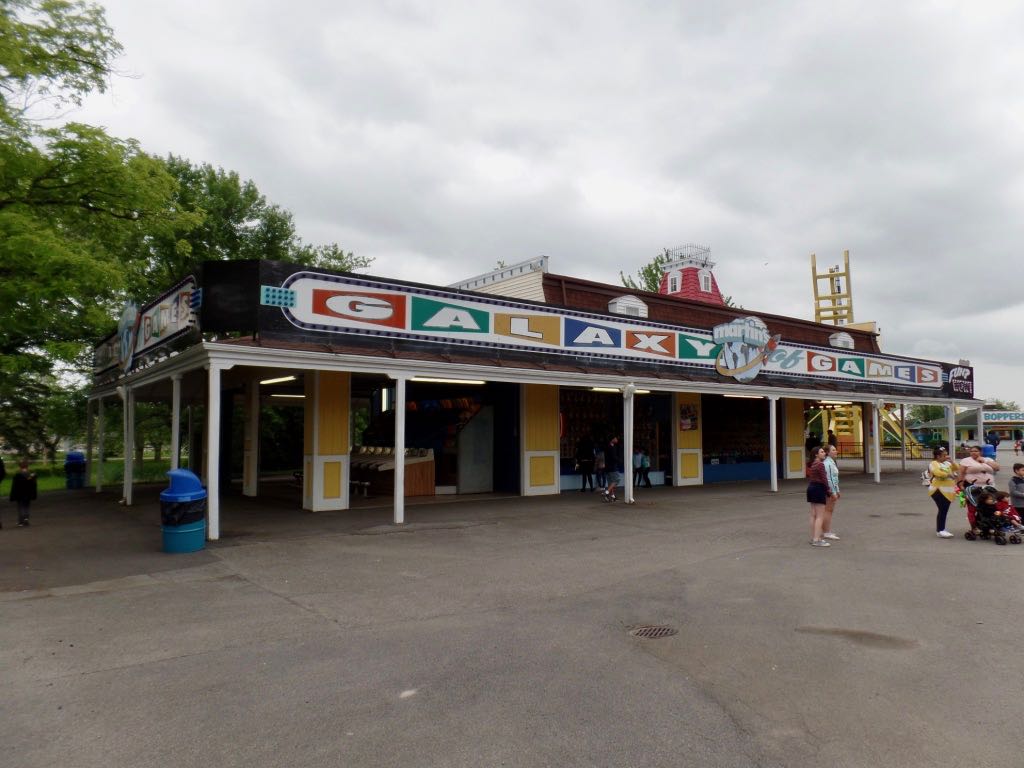 Martin's Galaxy of Games --- Martin's name is still on a couple of pieces --- although the only game I have a particular picture of is one of those ball-rolling horse-racers. 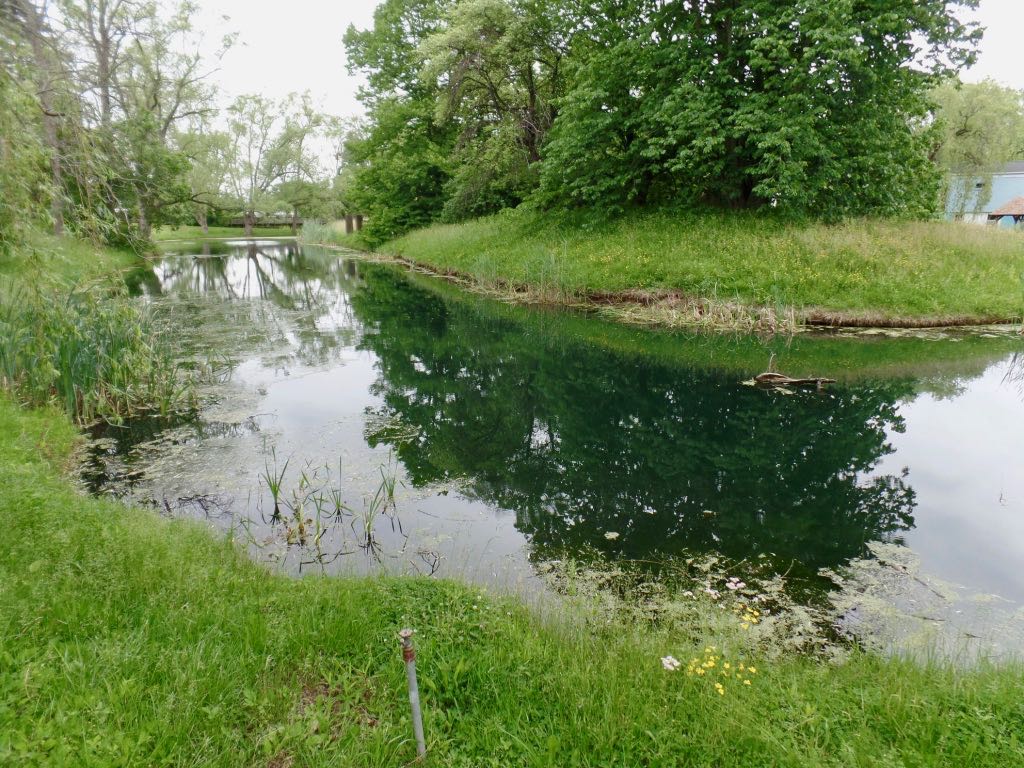 Pond or river, with an island opposite it. It's the sort of thing that looks like a camping area but I don't know that they ever had that. 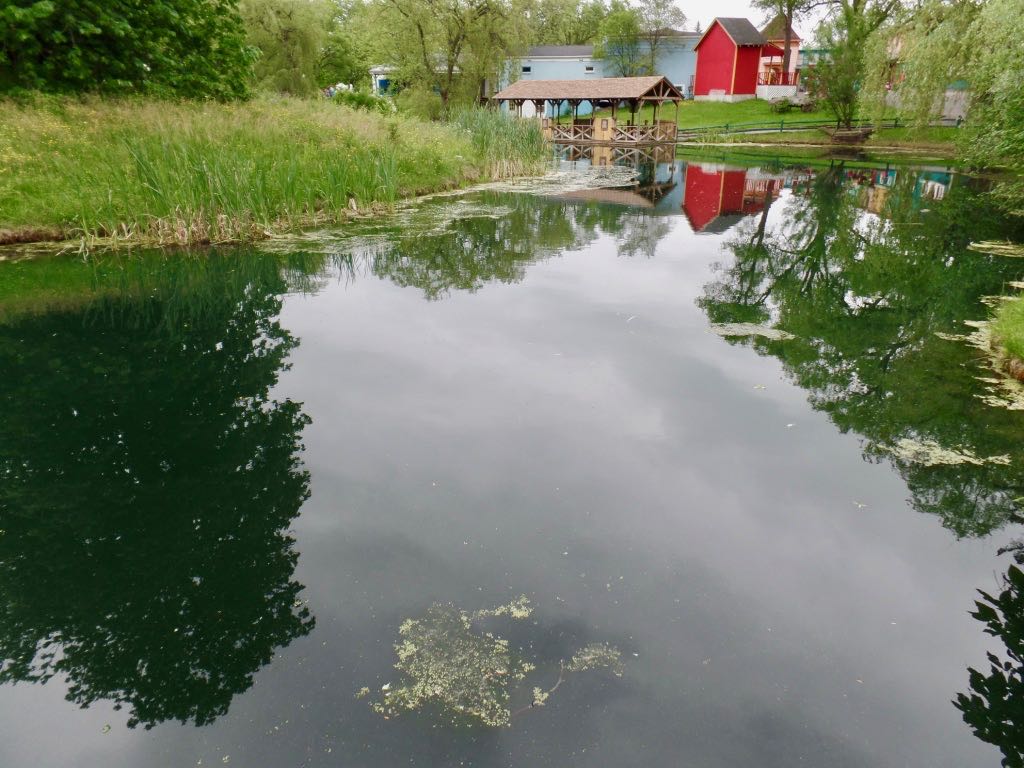 Looking over the pond back at the Western-themed area; this is a rare chance to see the backs of those buildings. bunny_hugger about to learn whether the fish would like a handful of Cheerios. 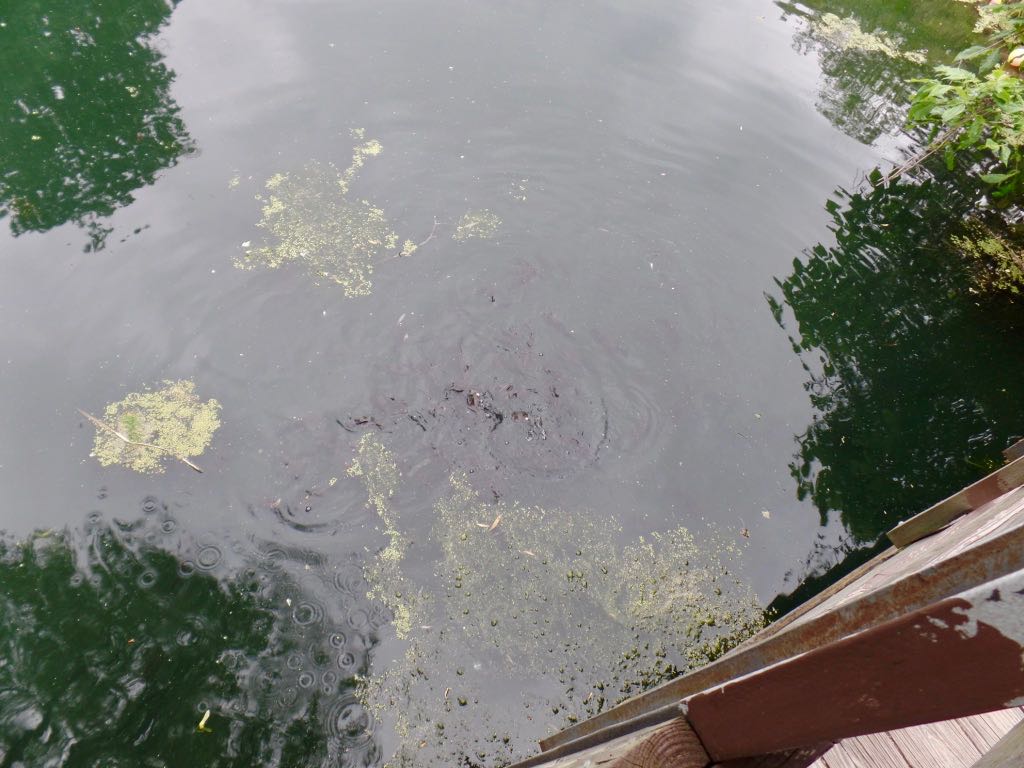 They would! The fish are quite happy with the Cheerios idea. 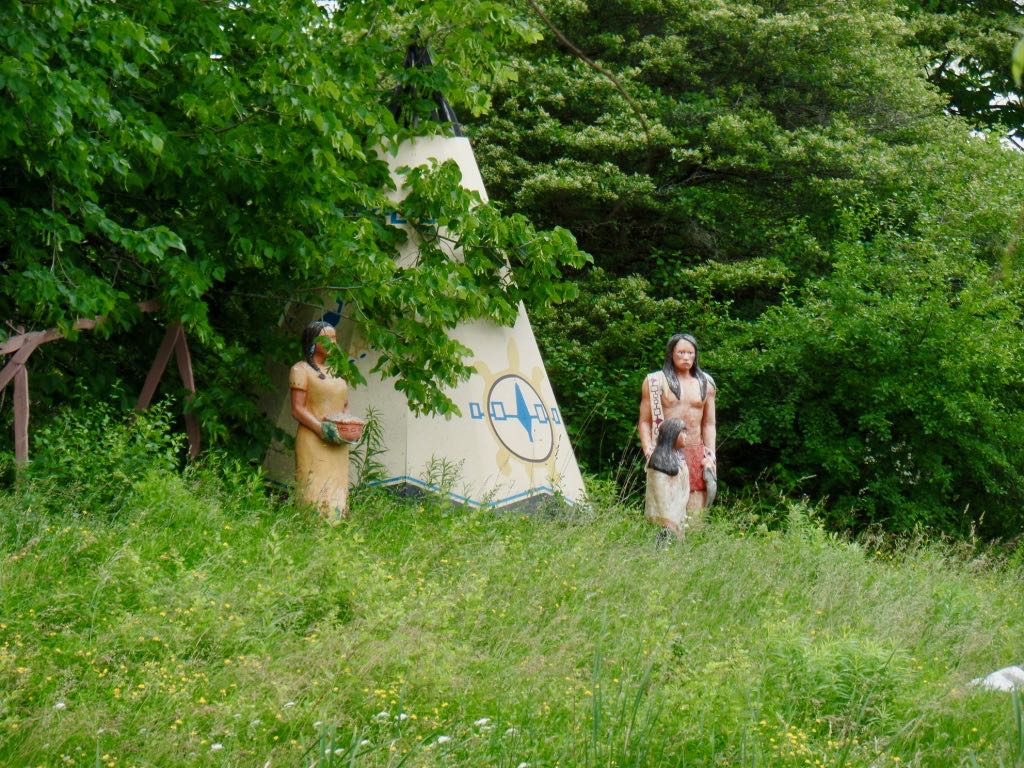 And, oh, Indian statues that I'm assuming go back a ways at the park. They're off on the island, inaccessible so far as I know.

Trivia: When the flying aircraft carrier USS Akron crashed into the ocean off Barnegat Lighthouse (in April 1933), the Naval blimp J-3 launched, to drop life jackets to the survivors. J-3 also crashed, killing two of its seven-person crew. Source: Fighting To Be Heard: New Jersey In History, Thomas P Farner.

Currently Reading: Promise Denied: NASA's X-34 and the Quest for Cheap, Reusable Access to Space, Bruce I Larrimer. The title and prologue suggest it's going to be a book from someone Very Mad about experimental spacecraft development of the 90s, an admittedly quite frustrating time, and that's the sort of teapot-tempest I feel like these days.