Am I humble enough now?

So that fish who was swimming funny? And that we suspected had some disease, possibly flukes, and so were quarantining? Monday he got the last of his PraziPro treatments for flukes. He was looking fairly good, swimming around more albeit still in his weird, working-too-hard manner. Eating regularly. I checked in early afternoon yesterday, examining the wonder of the baby fish. And then six hours later he was dead.

No specific idea what. There was black tissue under his skins, which

bunny_hugger judged was internal hemorrhaging from some infection. PraziPro isn't a general-purpose antibiotic so whatever was bothering him we managed to miss, again. We've got a terrible track record at helping fish recover from illness; the only exception we can think of is Gemini, one of our original and biggest fish, who came back from a mild fungus and something that scraped off scales. Magnum, the other of our original set, also survived scale-scraping, but that's injury rather than illness. It's a disheartening end.

The baby fish in the other tank, though? This afternoon I counted five, possibly six. Some are hard to make out and move around in ways making it hard to tell. And given how the biggest seems to be growing it's possible there are quite a few more and they're just not yet visible, or not yet recognizable. To see baby fish you have to look at empty water until something changes and you see them everywhere. (The flashlight helps.)

Yes, it's occurred to me that had the bigger fish not been in quarantine, we would have emptied out that tank long ago, and the baby fish would never have hatched, or been killed when they were specks. It's tempting to think he gave his life for a half-dozen baby fish to live, except that the bigger one made no such choice, and that there was no reason he had to die; he just did.

Still, we're not emptying the quarantine tank, against the possibility that there might be baby fish in there. This seems improbable, since there have only ever been three fish in there (Magnum and Gemini together all winter, and this one this summer). But it's imaginable. And we've taken water and thus possibly fish eggs from the left tank to change out the quarantine tank's water. There's a good chance that our now-dead fish ate baby fish, but, there's also the chance there were more eggs or eggs waiting to hatch than that. Or that some babies got lucky.

And I suppose in future years we're going to be much slower about emptying out the tanks after we move the goldfish back to the pond.

Well. Let me take you back to Fantasy Island, back in the middle of June 2019 and the Wild West Shootout show. 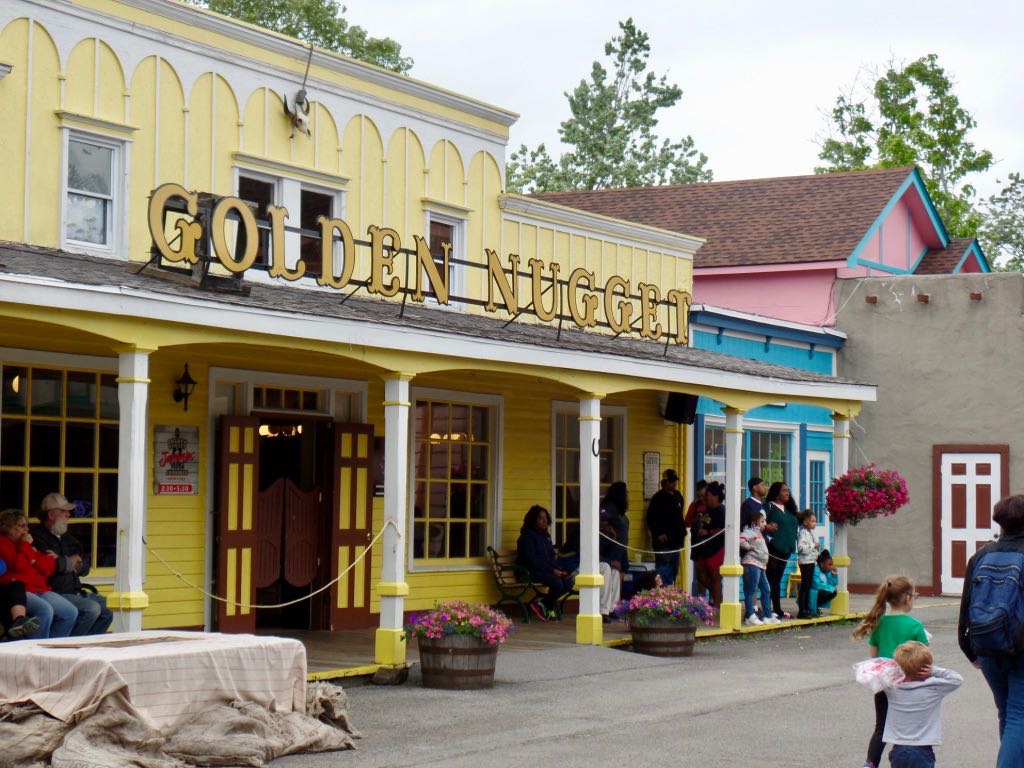 Back to the western midway. Fantasy Island had an Old West Shootout, every two hours, a live show that used to be extremely common and that's almost faded out now. We were eager to see one. And say, what's that shrouded thing on the left? 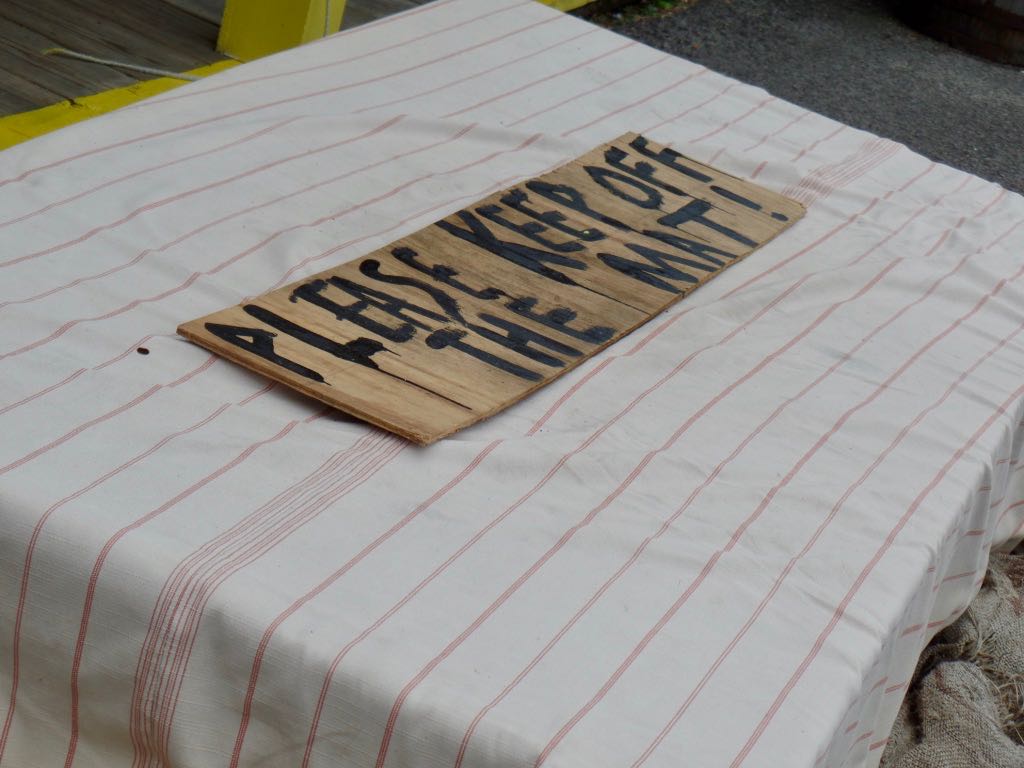 Huh, that's funny. Why would it be so important that no one be on the mat? 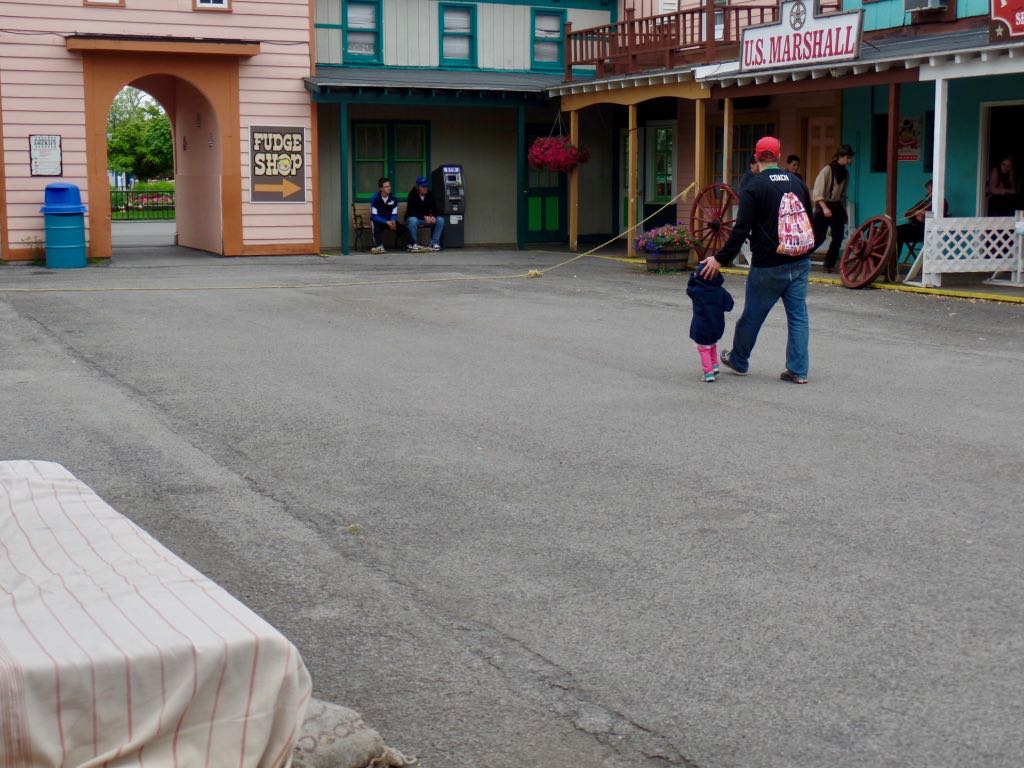 Adult trying to hurry a kid out of the way as the pre-show warmup gets under way. 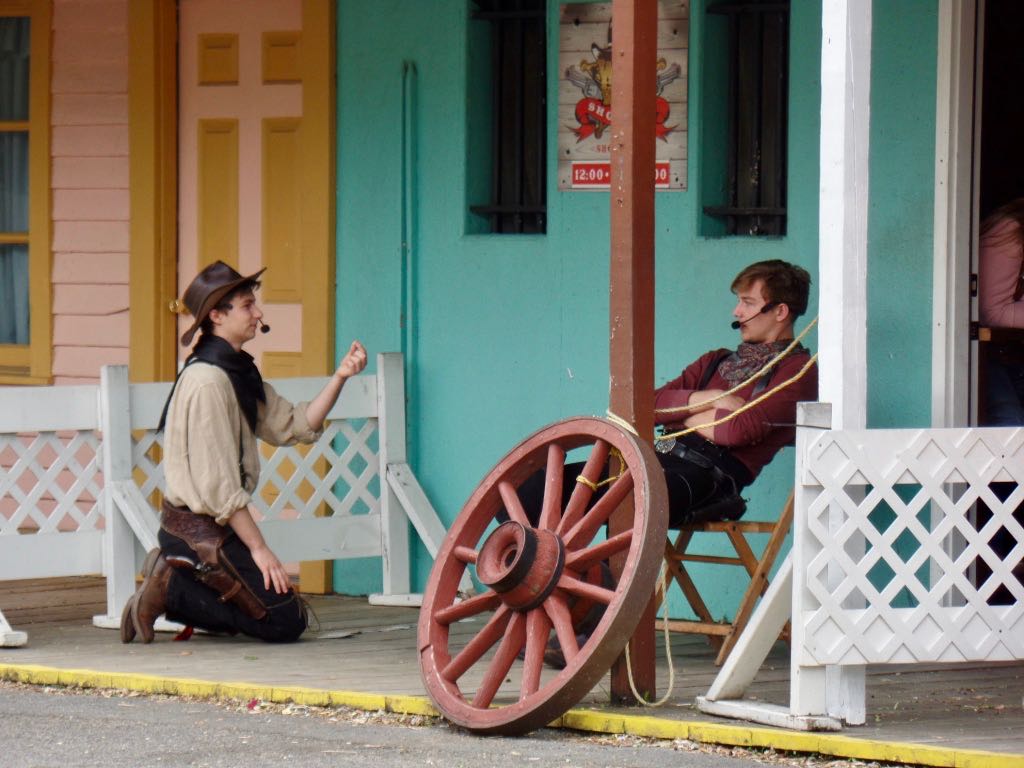 The shootout's pre-show. The premise is about the sheriff of the town being an incredible screwup, and that's introduced with stuff like this where he tries to talk someone into playing chess with him. 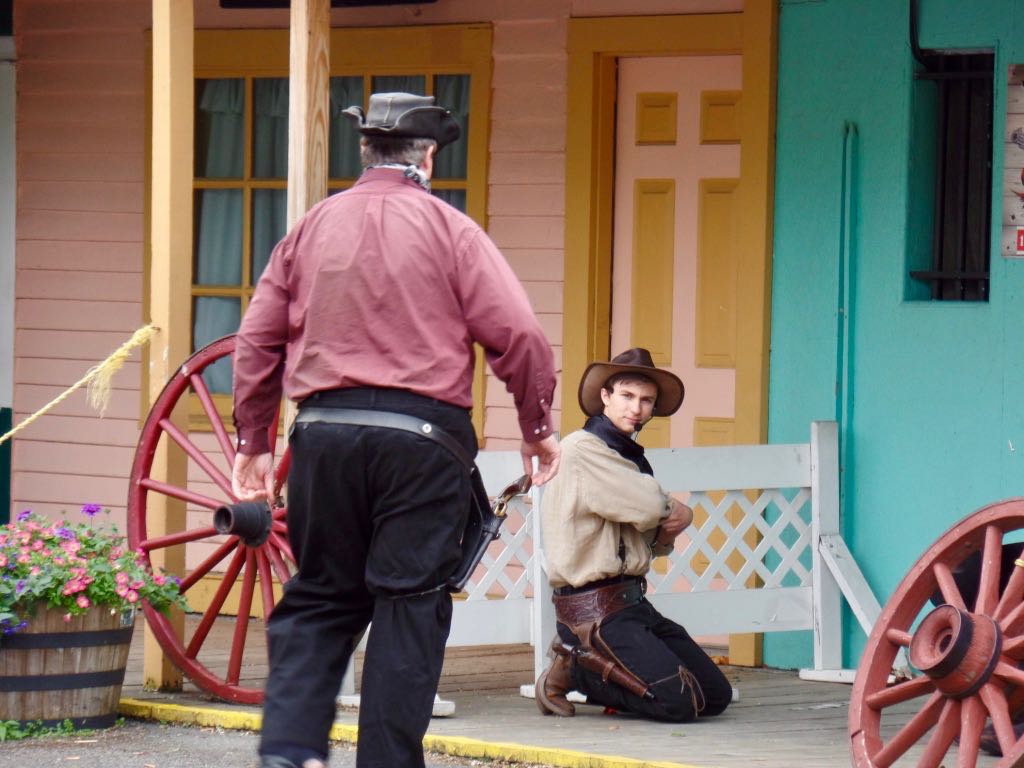 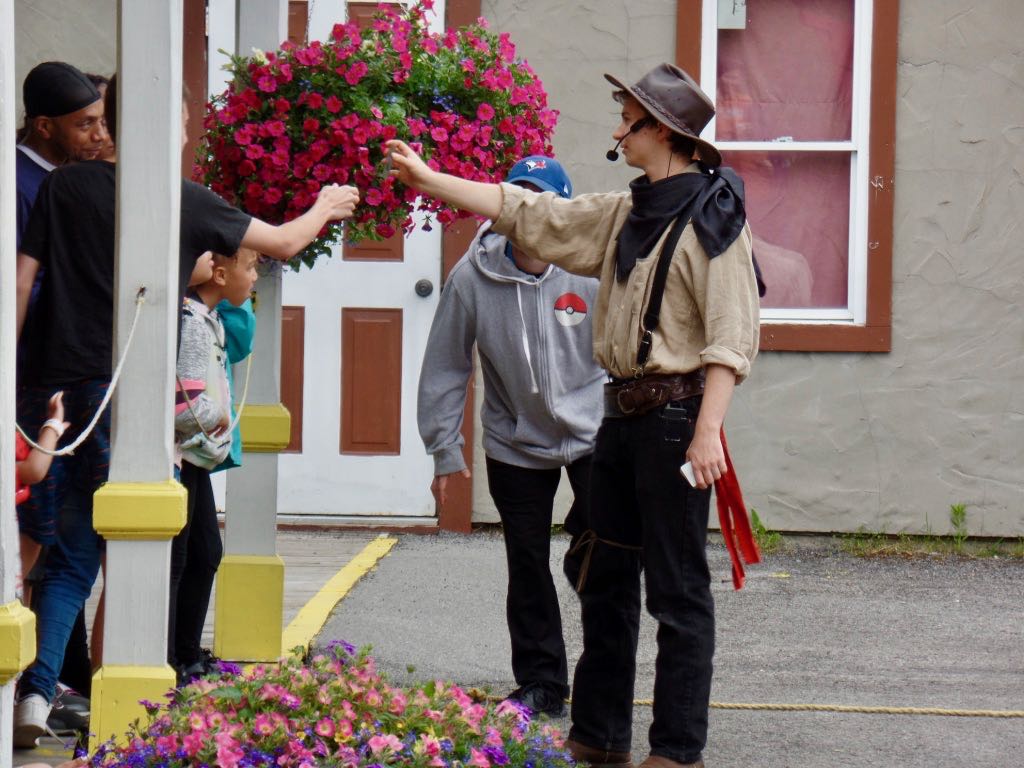 And a bit of crowd work before the sketch really gets underway. 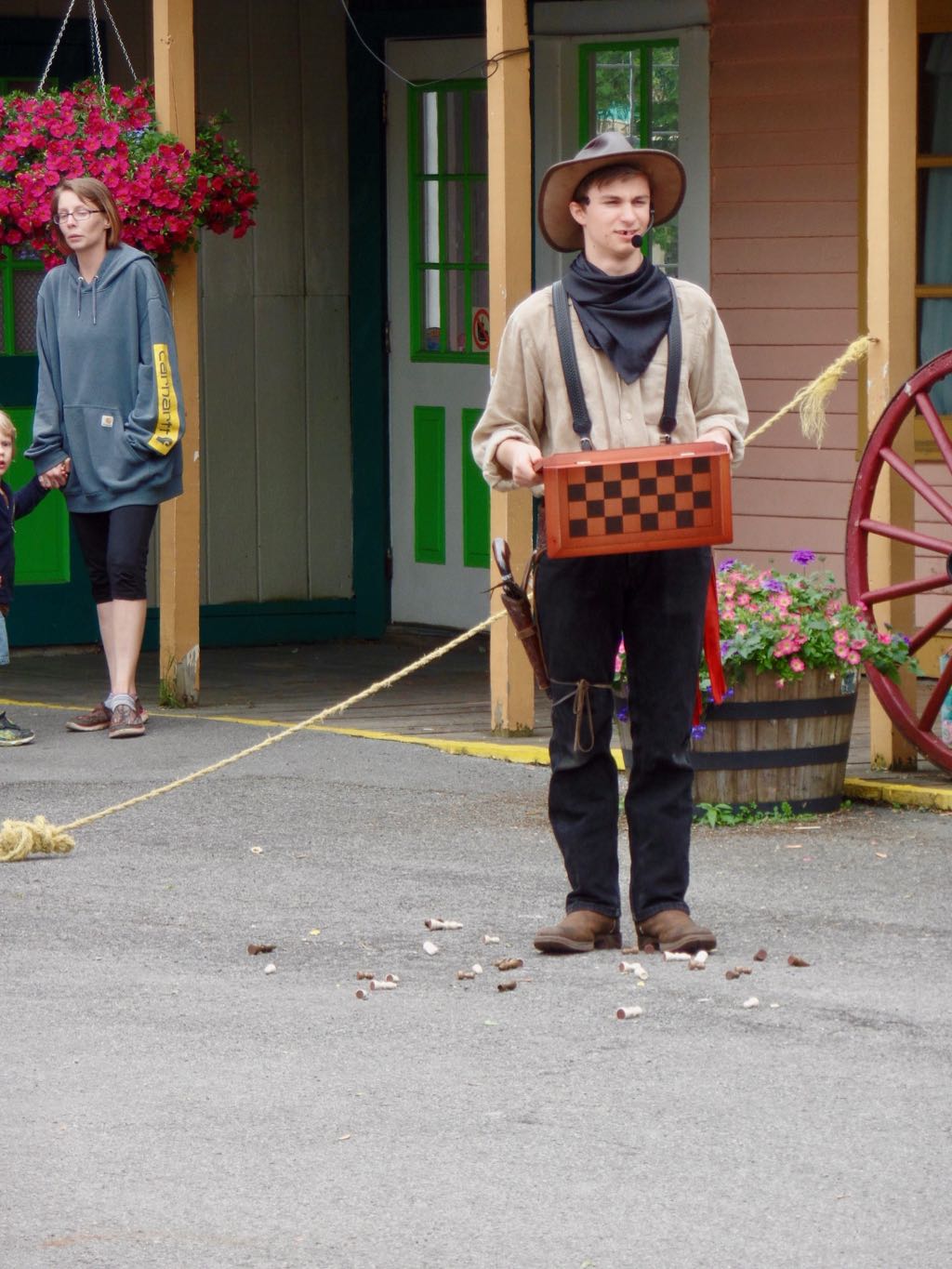 The baddies are not up for a game of chess. In fact, they get to be a bit bullying while the hapless sheriff tries to pick up the pieces. 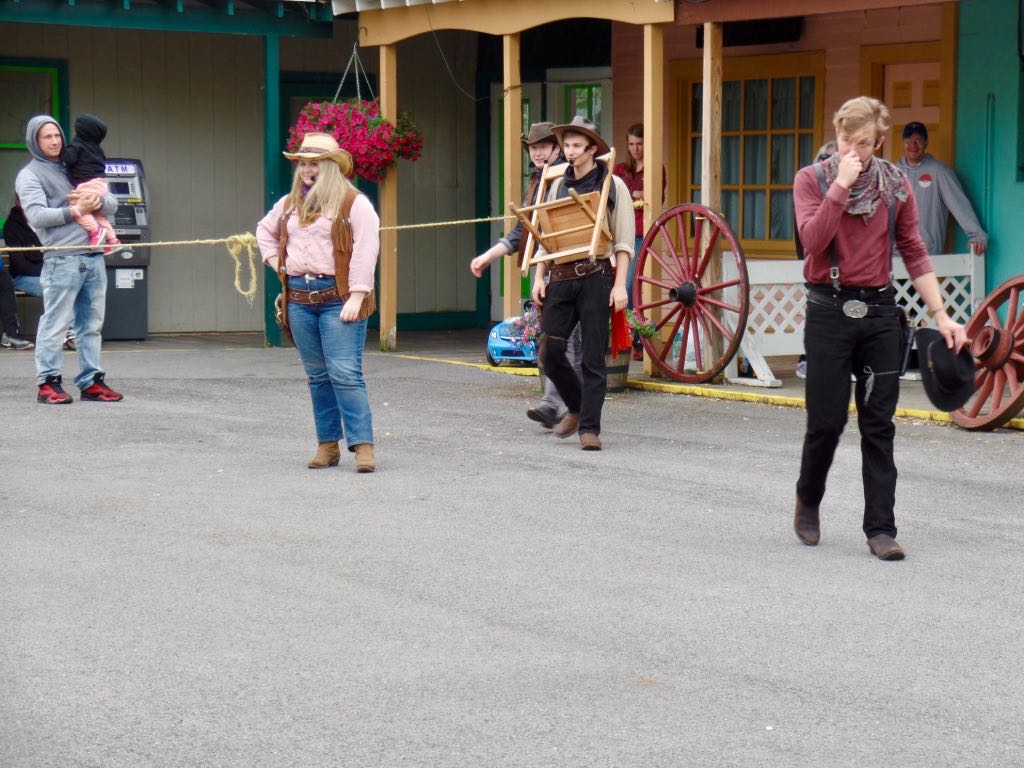 The Deputy, the competent woman of the scene, tries to get the bandits back in line and things put in order. 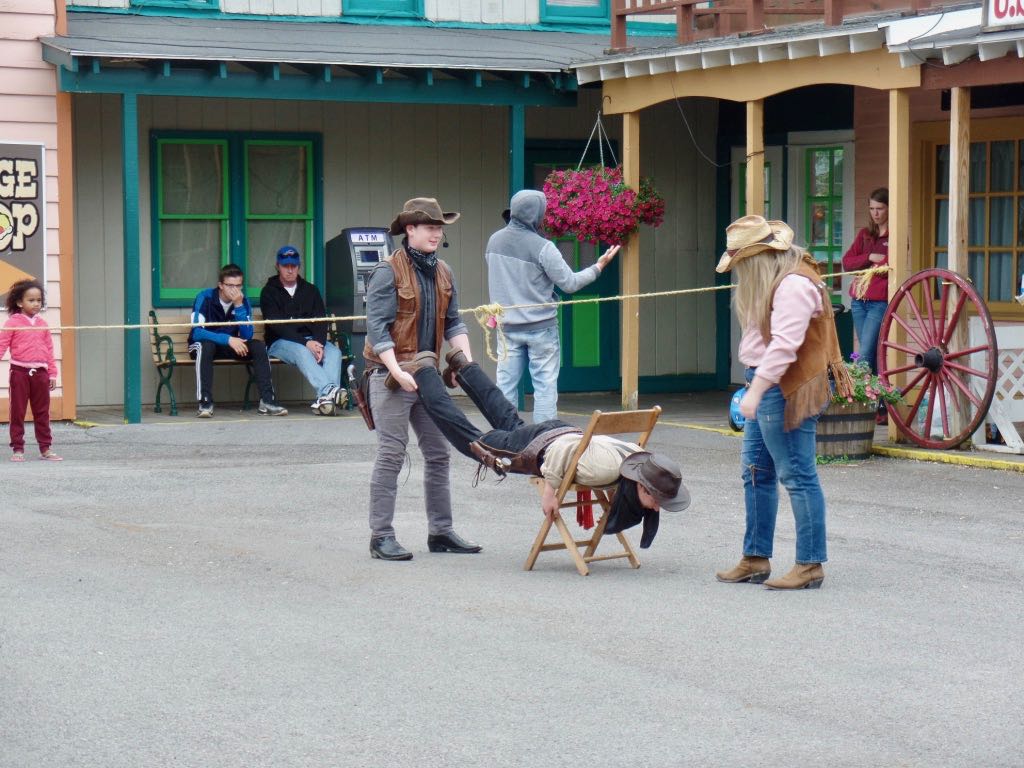 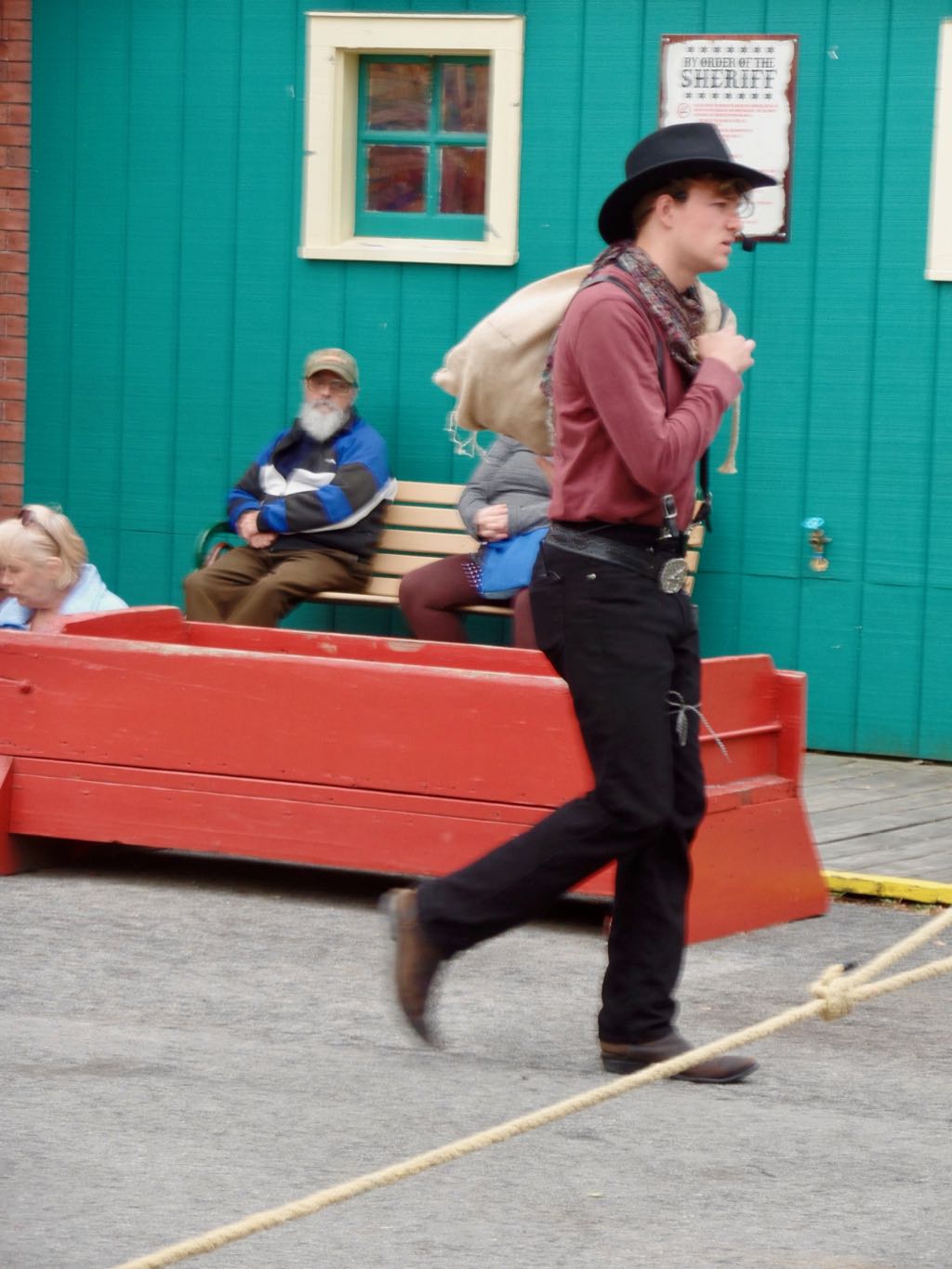 Bandit making off with a heap of gold, as they will. 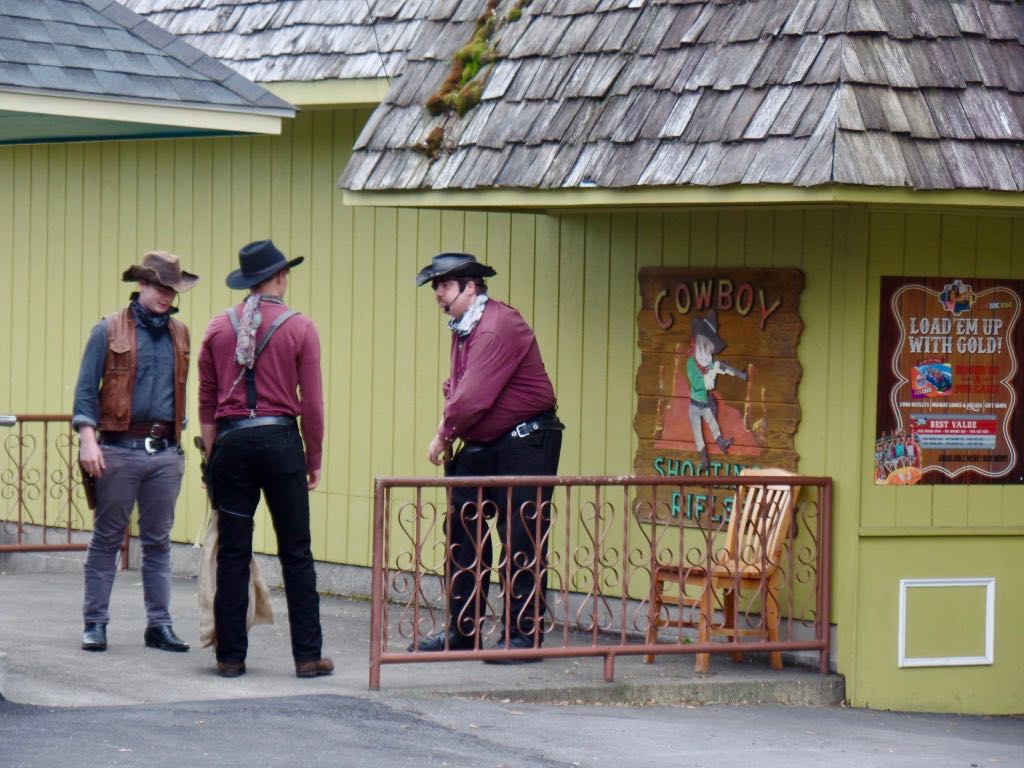 And the bandits go off-stage for a bit, before the climax to the first act. 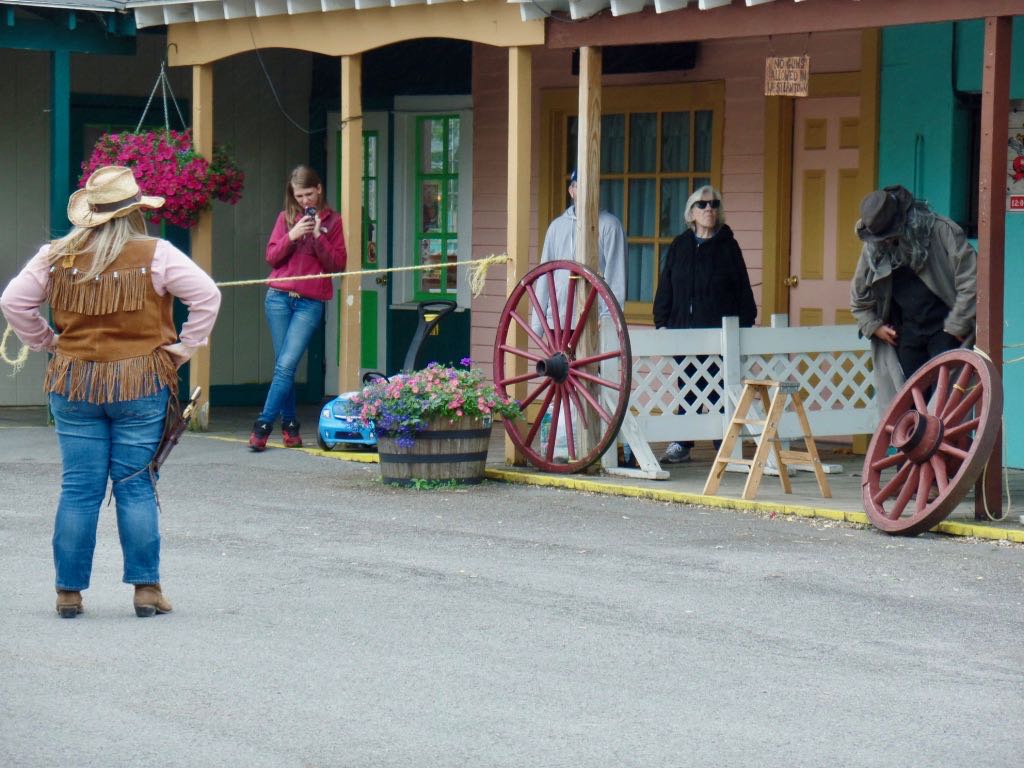 The Deputy Sheriff tries to shame the Sheriff into doing something about the lawbreakers; he's dressed up as very old man. 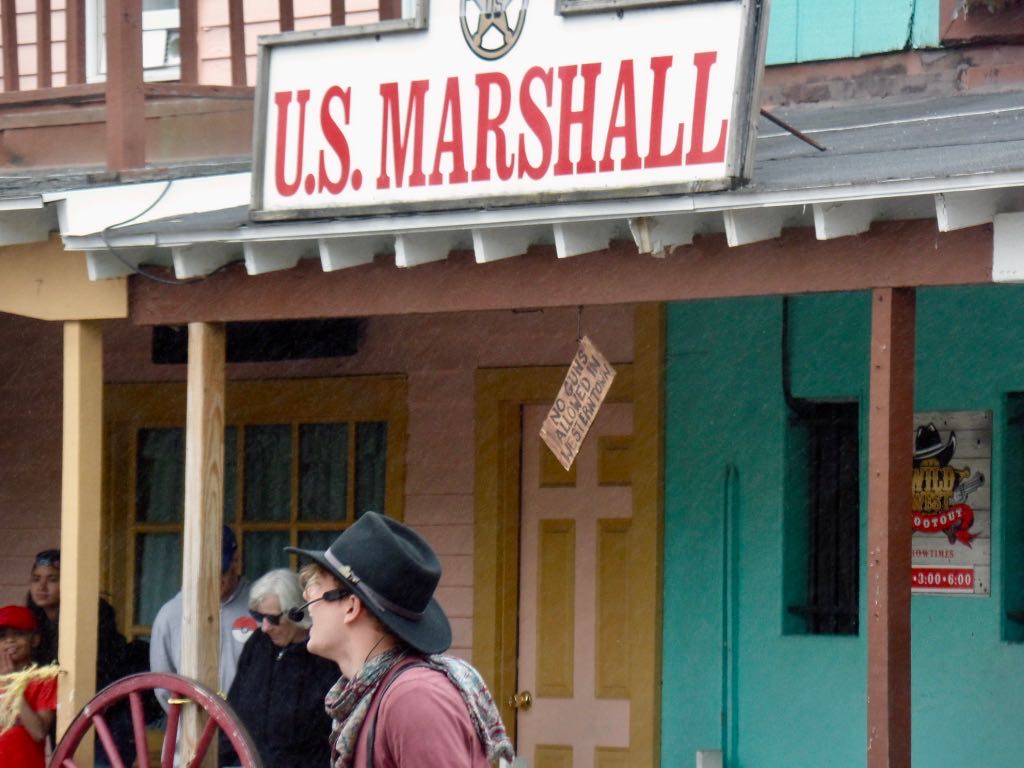 Bandits shoot off part of the 'No Guns Allowed In Western Town' sign. 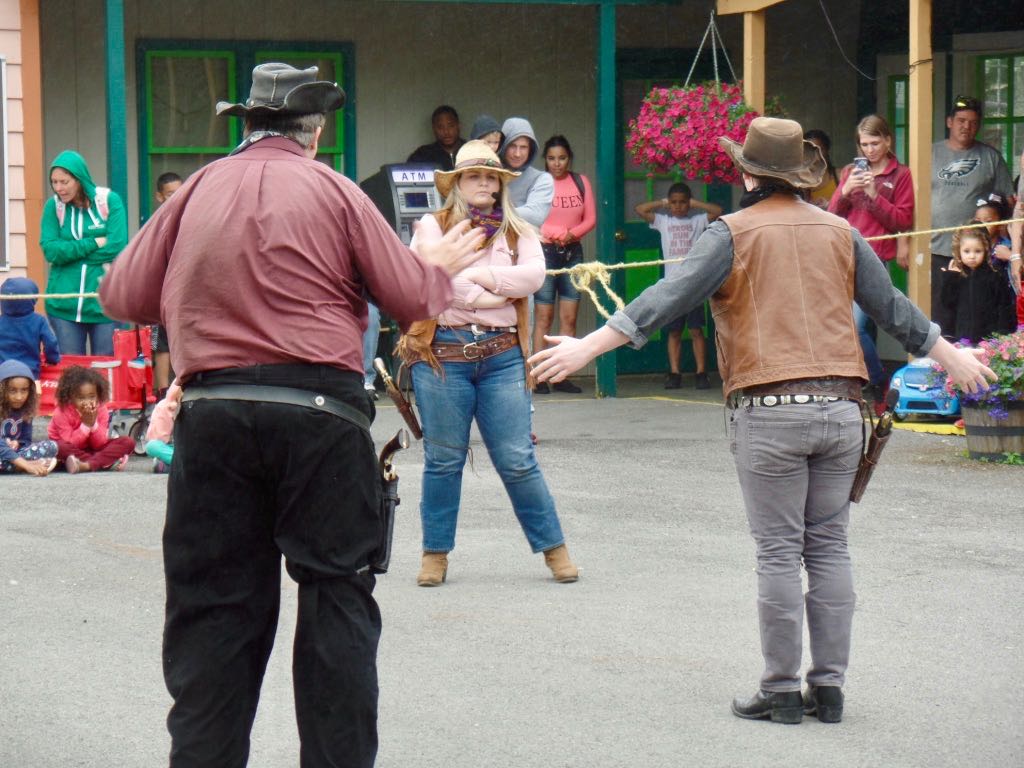 Bandits can not believe they're dealing with a gurl. 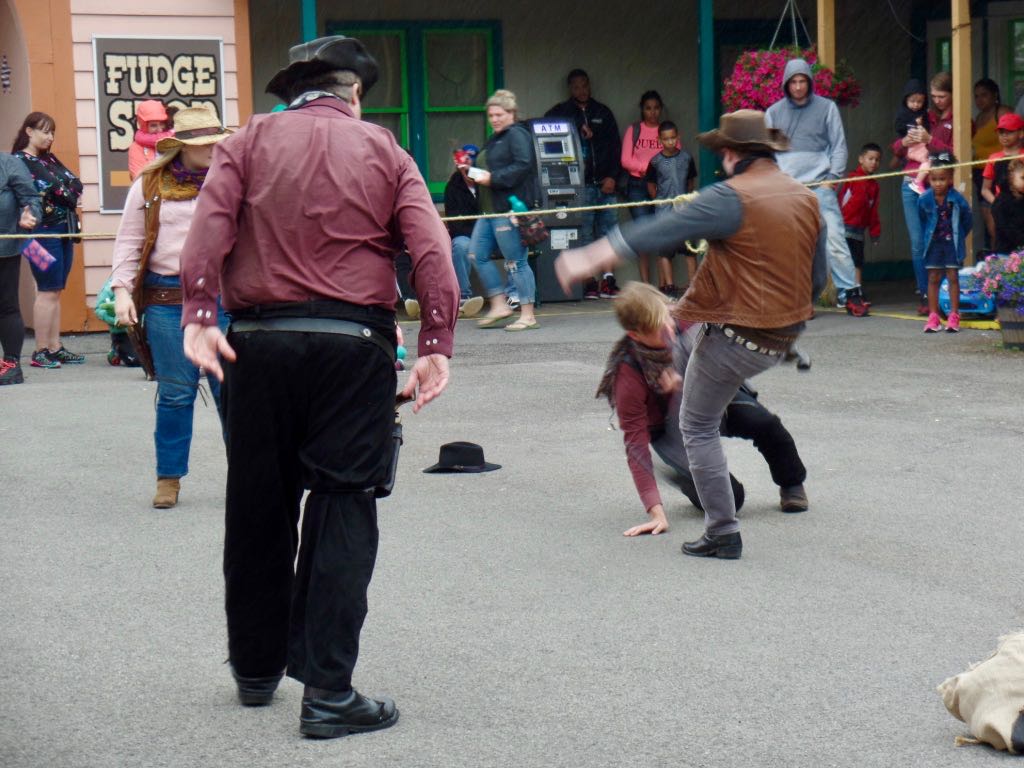 And they take to beating up the Sheriff. Will he be able to come back from this humiliation?

Trivia: During the six months of the Columbian Expo the fairground's police issued thirty fines for carrying Kodaks without a permit and 37 for taking unauthorized photographs. Source: The Devil in the White City: Murder, Magic, and Madness at the Fair that Changed America, Erik Larson.

Currently Reading: Promise Denied: NASA's X-34 and the Quest for Cheap, Reusable Access to Space, Bruce I Larrimer. Oh, yeah. This has got me wondering now, whatever happened to Burt Rutan and his Scaled Composites stuff? (Looks like he retired and Scaled Composites ... is still telling itself that its spaceship stuff is going to happen, this time for sure?)