My skinny arms, my evil intentions

bunny_hugger has reached the end of her chronotherapy, getting to bed now finally after midnight again and waking up, we're hoping, reliably in the morning. By a quirk of fate the last week or so I've been sleeping in late, only by an hour or so but still a fair bit considering.

It's comforting to have our schedules back to something like normal. And that I won't be sitting around for long hours wondering if I'll wake her by going to the bathroom. I occasionally think it'd be nice to have a second bathroom, I suppose in the basement; this past month, it's felt like it would be a great idea. That's sure to fade, now.

The drawback, I suppose, is that both of us have had the gift of time in the house by ourselves. I always have that during the semesters, but she gets time alone very rarely. At heart, of course, both of us really like being with each other, more than we even like being with ourselves. But everyone does need their alone time, and it feels like a loss to not have any more of that.

Michigan State plans to open its libraries the 24th, initially to 5 pm, then to 9 pm, then closing them down when the pandemic flares up again. But that might be for a short while a place I can walk to, and just exist a while. I don't believe it's safe to go to our hipster barcade or a restaurant or anything like that. But sitting somewhere around Q8.4.O94, with my mask on? ... That's probably a fairly low risk of infecting or being infected by anyone.

Let's return now to poking around Fantasy Island and the Fairy Tale Forest within it. There's a neat surprise return, too. 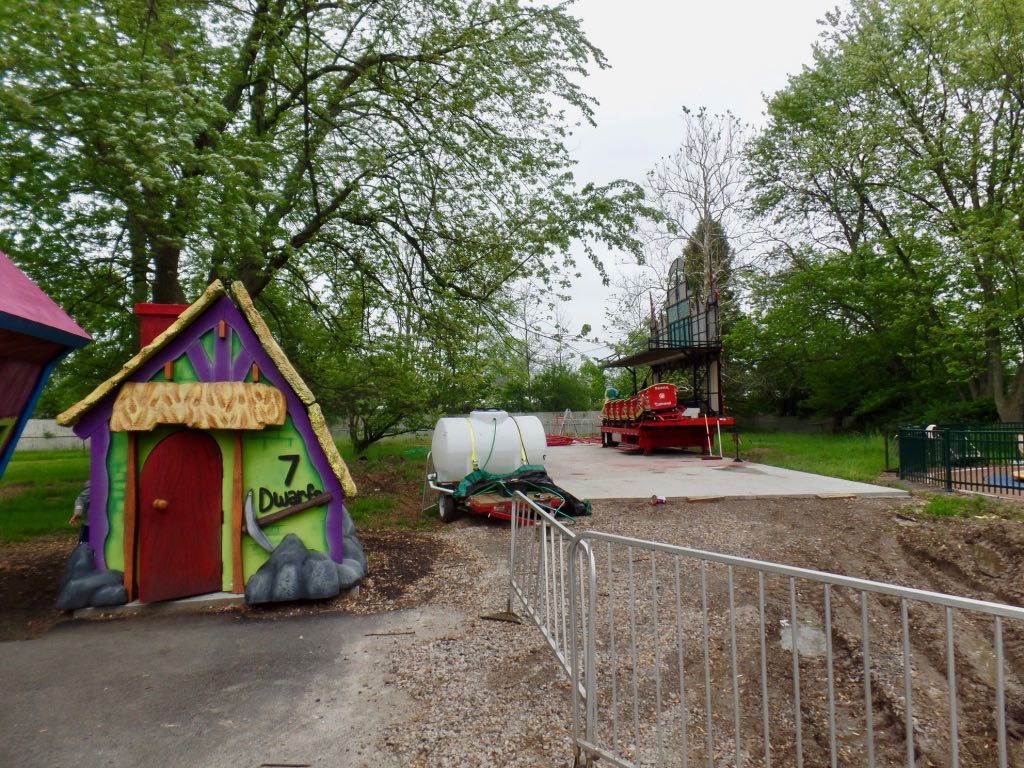 The house of the seven dwarves and ... some construction! They were putting in a roller coaster, Dragon's Flight, that would open in August 2019. 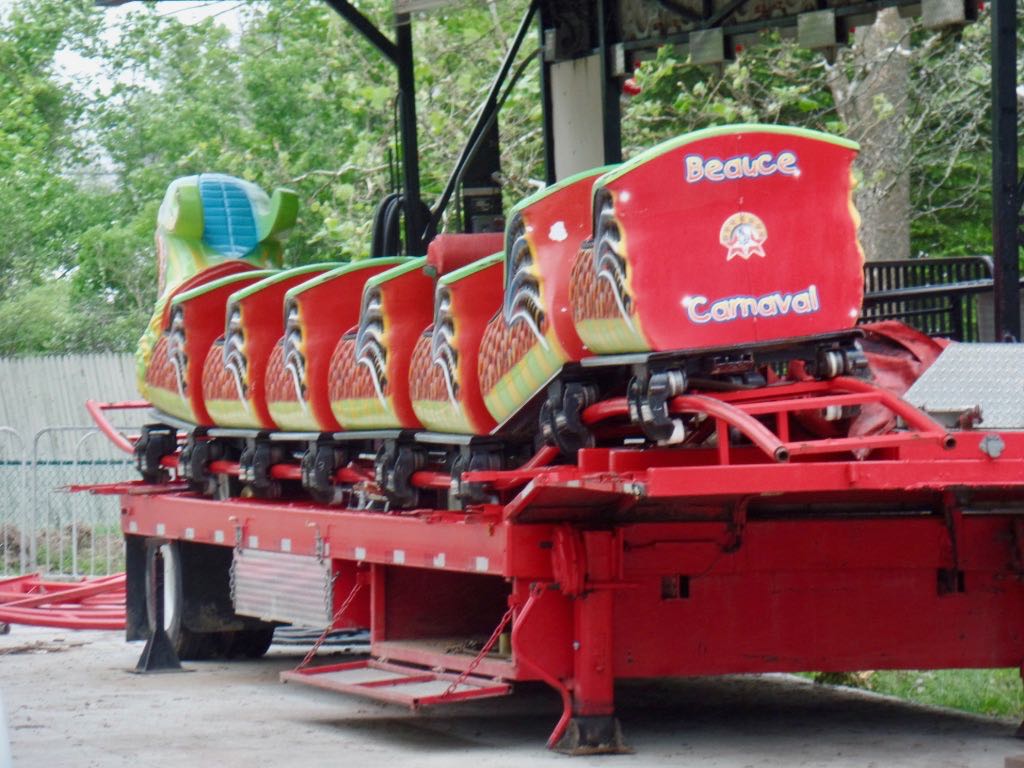 It's a Dragon Wagon that they got from the Beauce Carnaval, running out of Ontario. The neat thing is that Fantasy Island sold this ride to the Beauce Carnival, according to Wikipedia, so that this was a return of an old ride to the park. (The Roller Coaster Database does not make a note of this.) 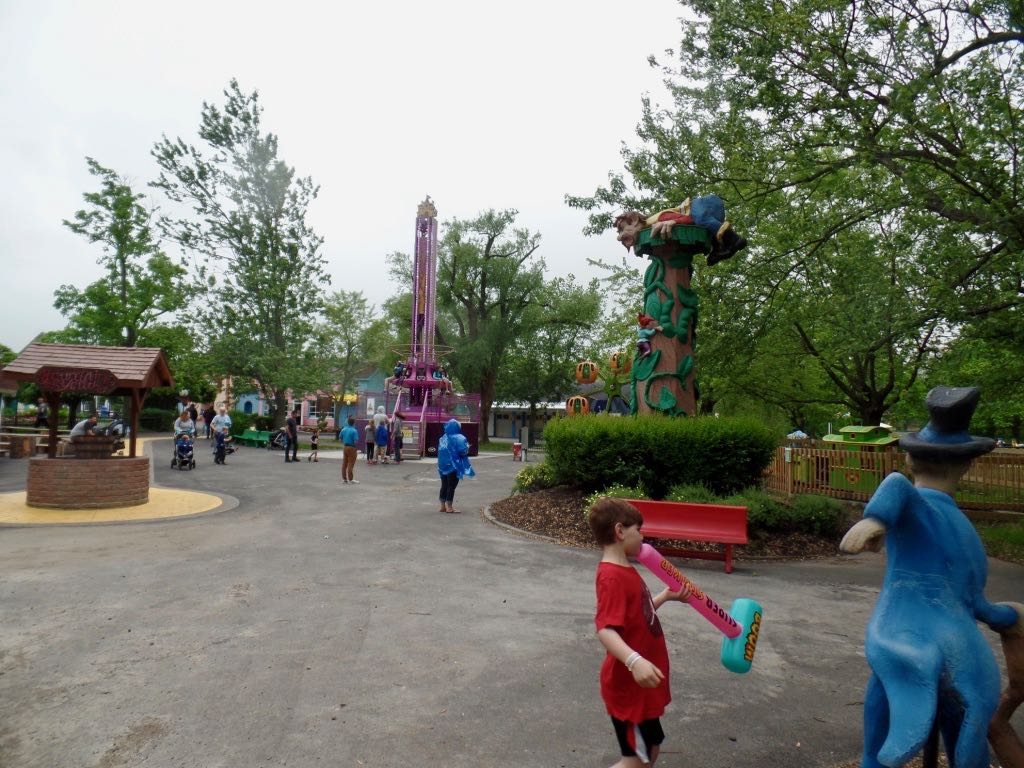 View of more of the Fairy Tale Forest area. Jack and the Beanstalk are over on the right. 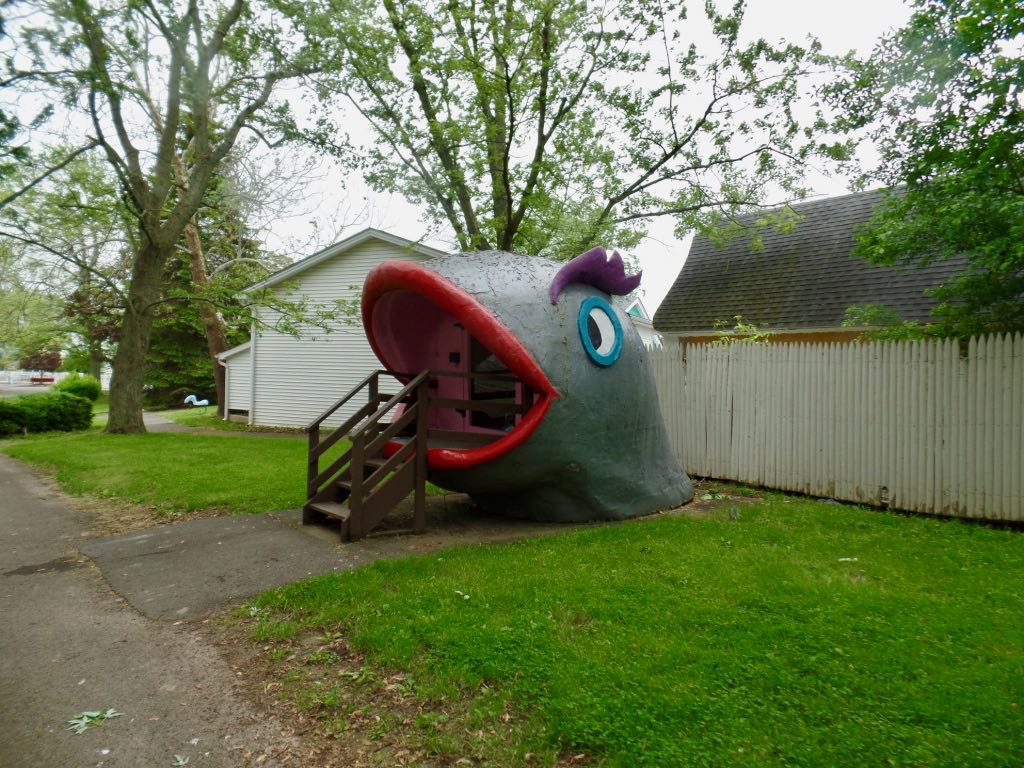 Jonah and the Whale? Moby-Dick? Nope, this is the whale that swallowed Pinocchio and his father. 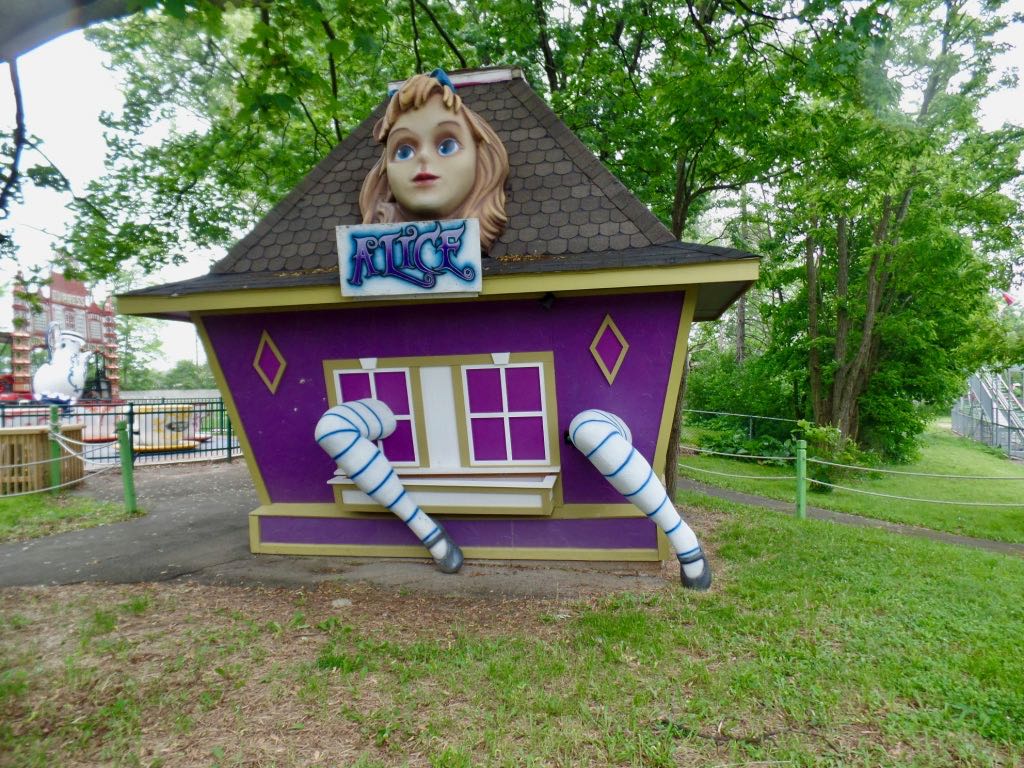 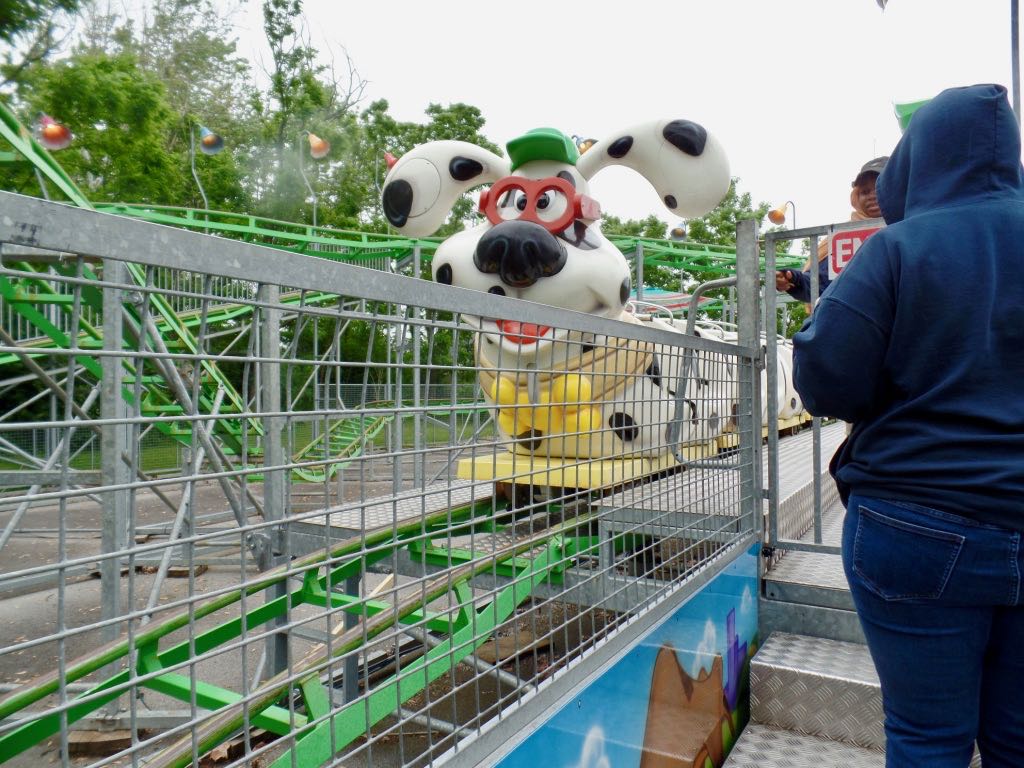 The third and last of the roller coasters we could ride, Max's Doggy Dog Coaster. It's a Wacky Worm model, like at DelGrosso's, in the other theme you can get for it. 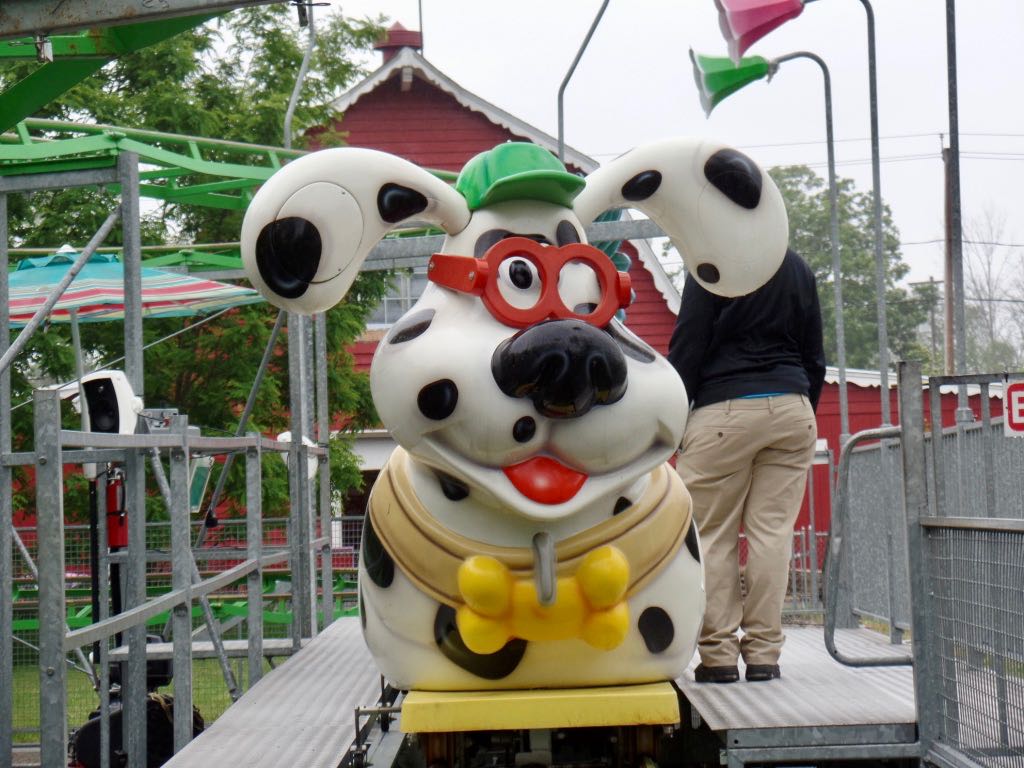 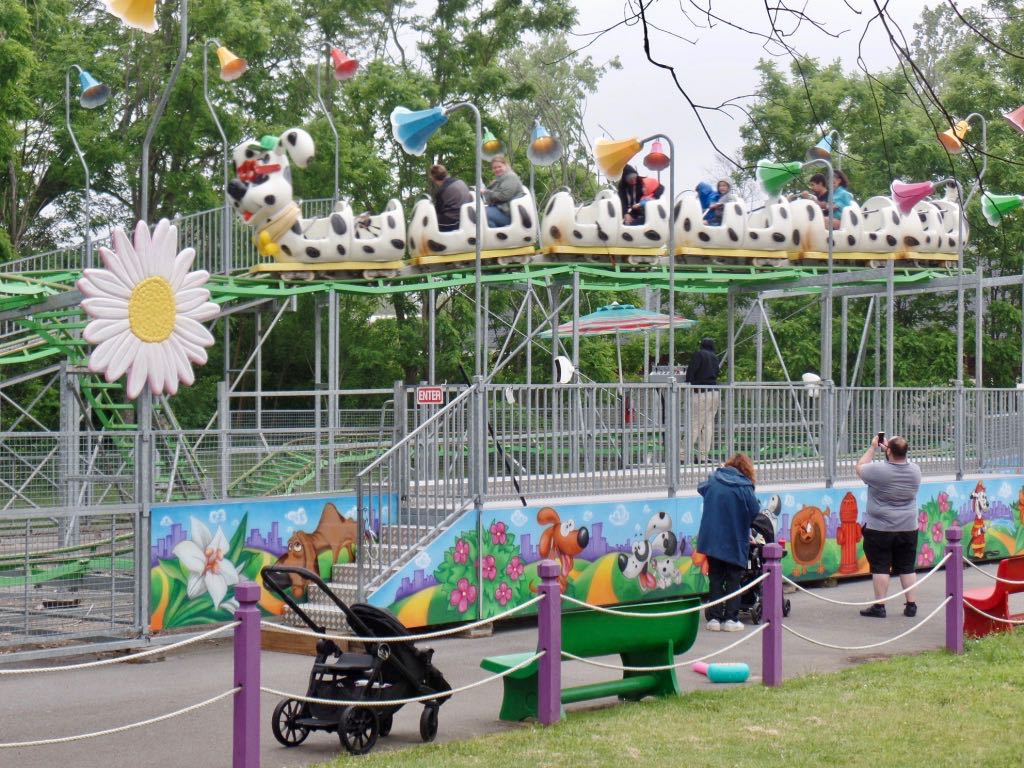 I suppose it makes more sense for a worm to be going along a path lined with flowers like this. The flowers make good lighting, though. 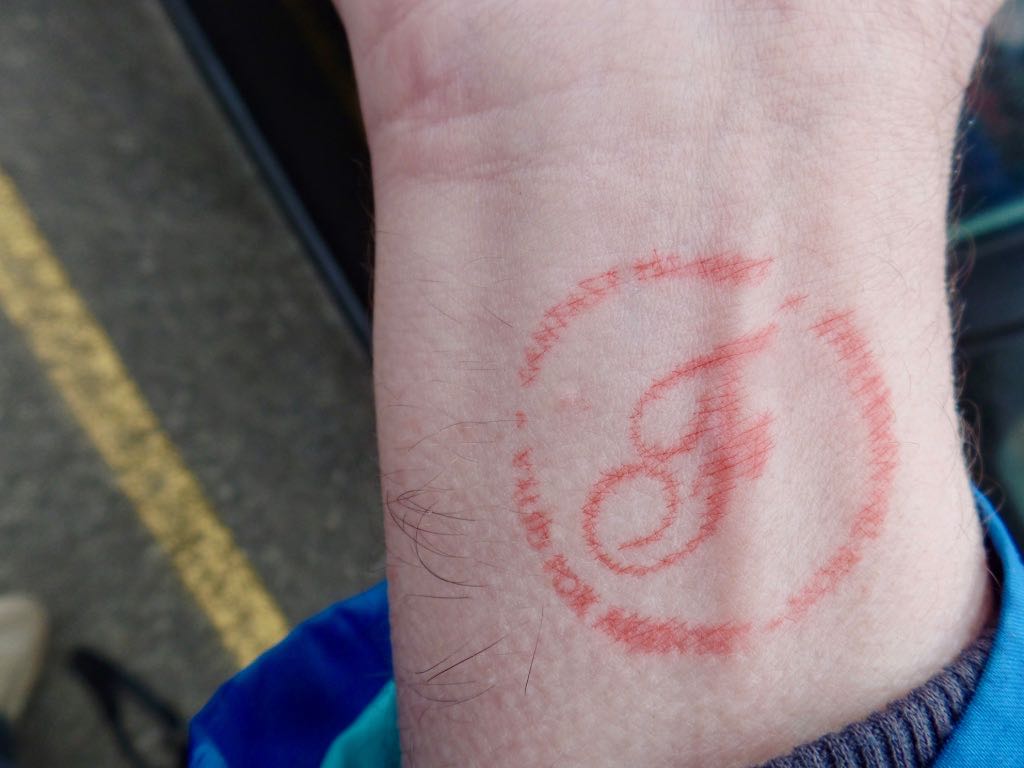 The reentry hand stamp! We went out to get our raincoats. We should have gotten stuff from the gift shop and brought it out to the car too, but I said we could wait for the end of the day for that, and was wrong. 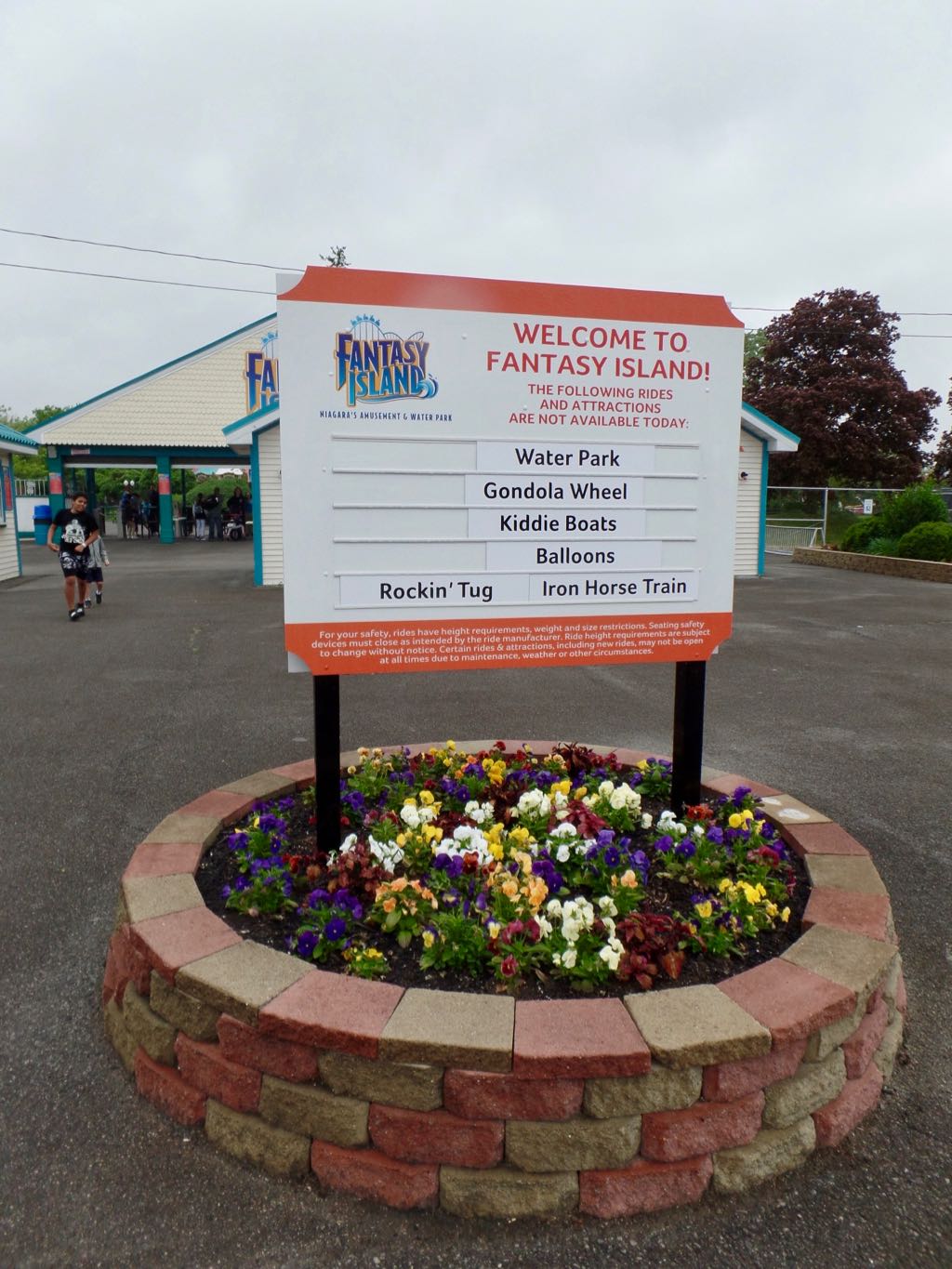 Oh, but going back in I thought to photograph the rides-not-available sign. The biggest disappointment here was the train not running. 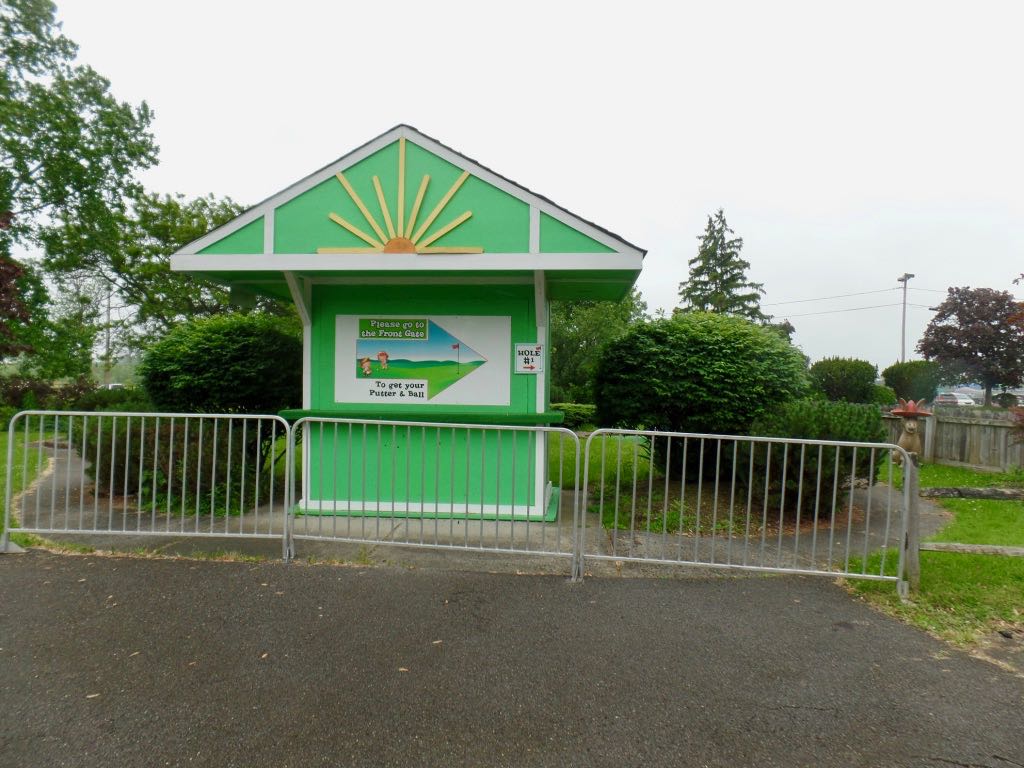 The miniature golf course wasn't open either, probably from being too wet. We'd have played if we could. 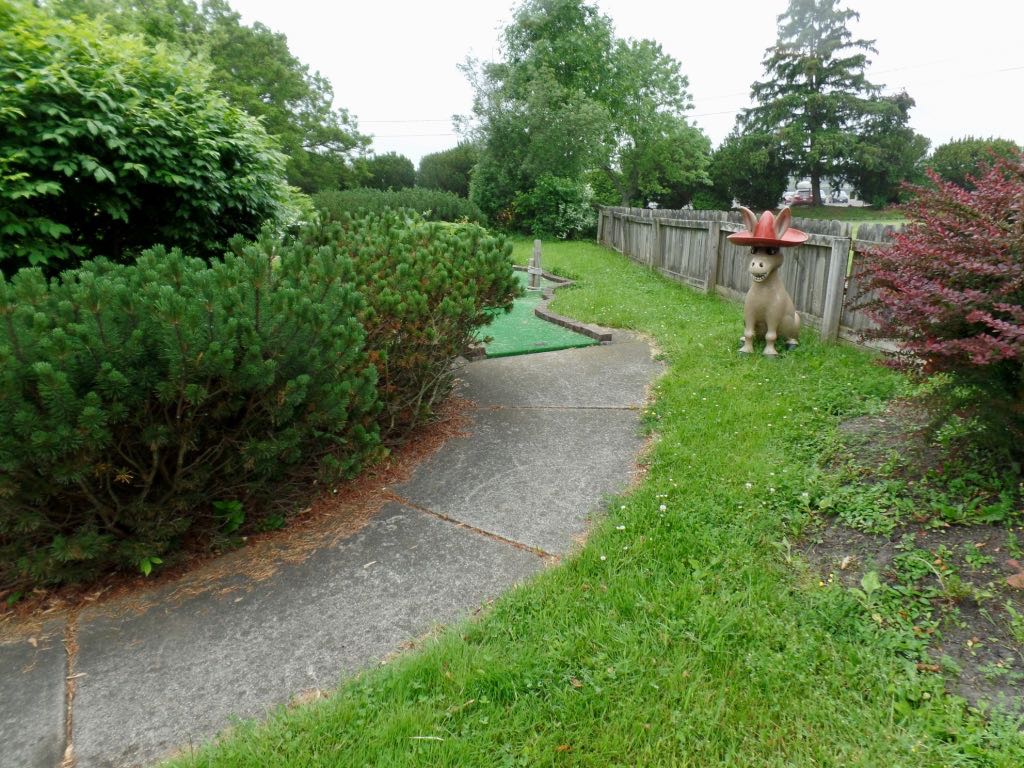 That's surely the Bremen Town Musician donkey on the right. 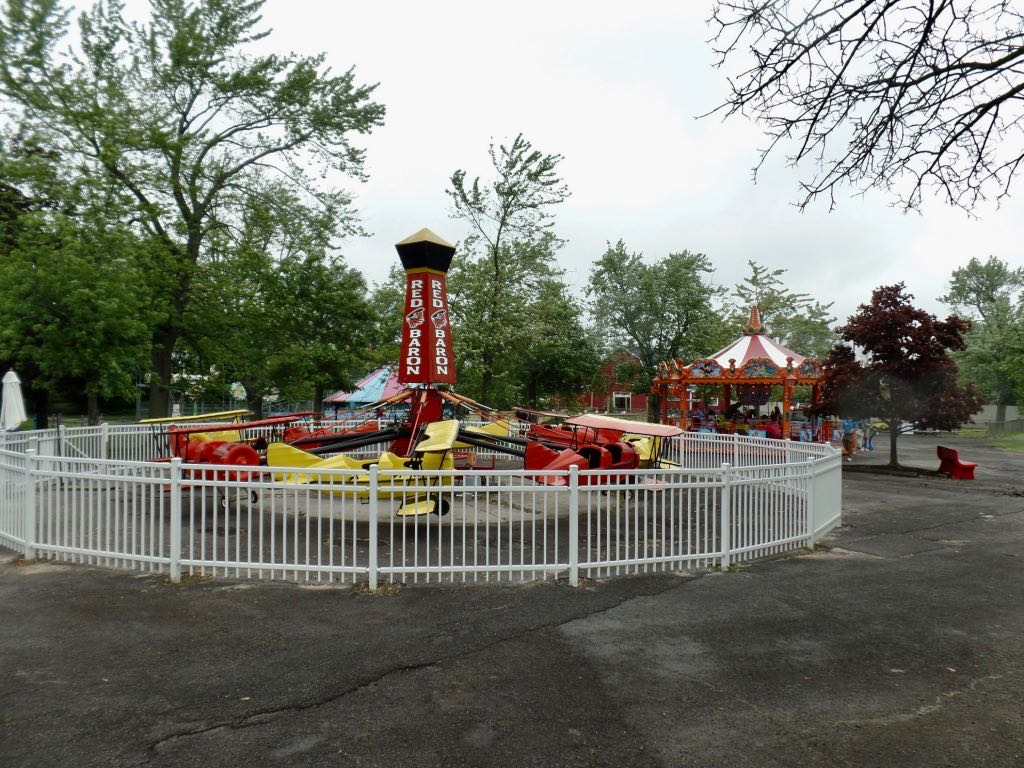 Airplane ride in Kiddieland; Wikipedia says it was moved to make room in the Fairy Tale Forest. 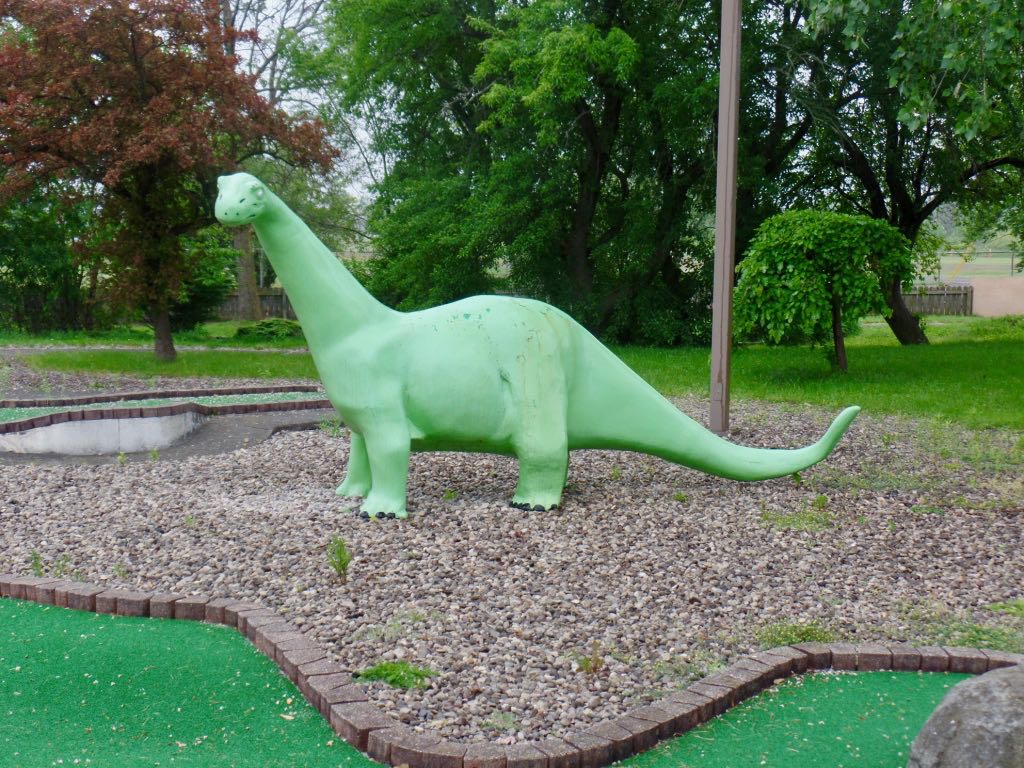 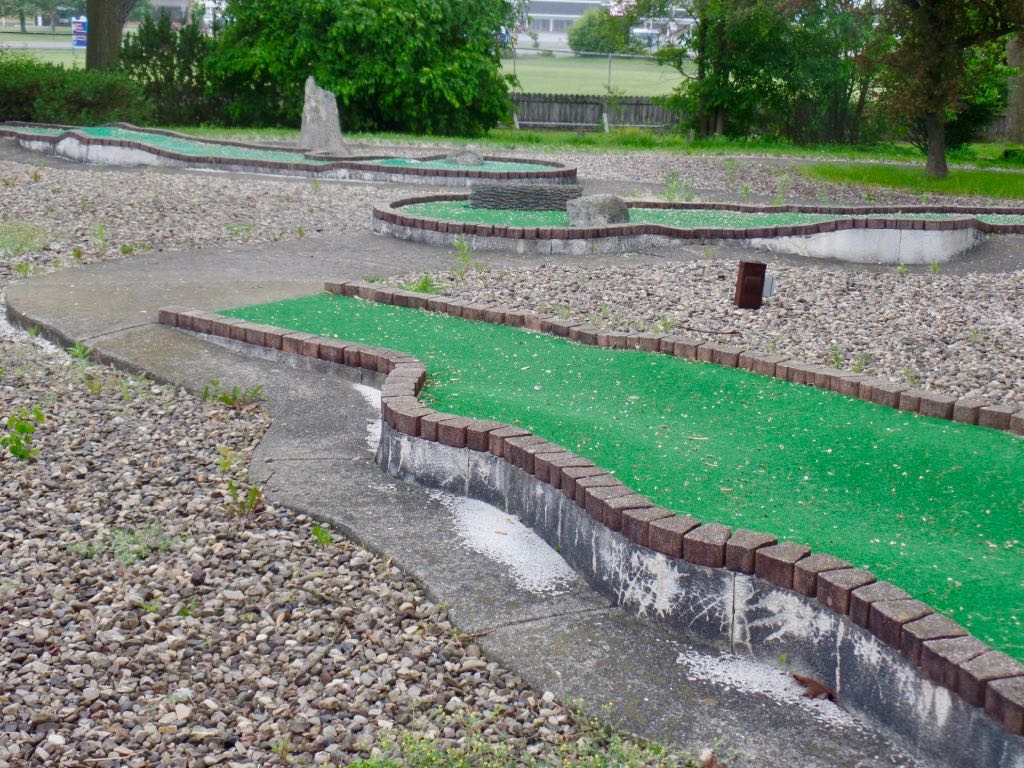 Some more views of the miniature golf course. It looks normal enough. 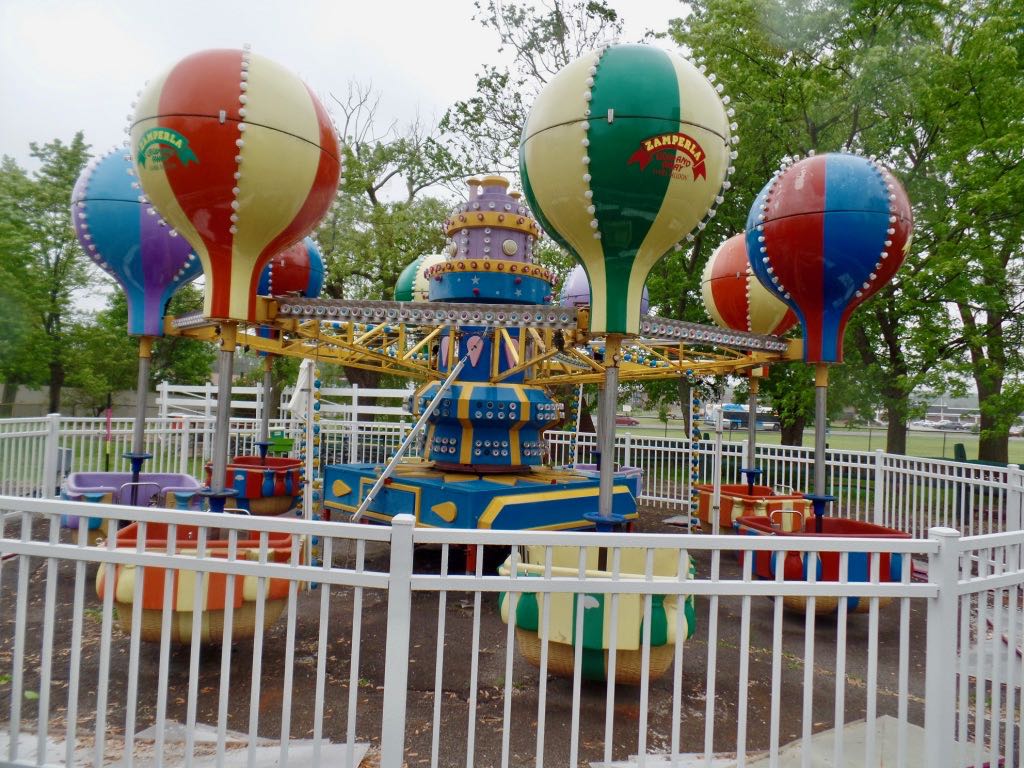 And here's the Zamperla balloons ride.

Trivia: The average grocery store in the United States takes in $516,000 per week. Source: Grocery: The Buying and Selling of Food in America, Michael Ruhlman. (Book published 2017 so the data is probably current to about 2014-15.)

Currently Reading: Promise Denied: NASA's X-34 and the Quest for Cheap, Reusable Access to Space, Bruce I Larrimer. You know, the book makes a bit of fuss about the X-34 Project being converted to a Program, but as far as I can tell never explains what difference that makes. And this annoys me because I'm sure it's of administrative significance and I love to know how that sort of shift affects the rules by which something operates.

PS: Sally Brown knows some imaginary numbers too, the littlest possible follow-up post. I bet it's my best-liked thing of the month.