And back at school, hitting the fire alarms

The Covid-19 cancellation of competitive pinball, and the three-year expiration for events to count for our world ranking, have finally hit me. After a couple months of my world ranking staying about steady, or even increasing, we passed the three-year mark for one of my twenty highest scores. That was a Fremont tournament back in 2017 when I finished in third place. And so my world ranking dropped from as the 820s to 897th. I'll lose another score at the end of August, when that month's Fremont finish (second place!) expires. But after that I won't lose anything until next July. This though events will still degrade, when they turn one or two years old. They just won't vanish altogether.

bunny_hugger meanwhile continues to sit pretty. None of her top twenty events will expire altogether until next March, and fifteen of her top twenty are from 2019. So she's sitting at 1118th, basically unchanged from last month's 1124th. Mind, last year at this time she was in 1353rd place worldwide. So we're about 250 places closer together than we were last year. I find it likely when competitive pinball resumes that we'll get even closer, and the clearing out of our oldest scores is going to help that along. (Before my love protests that I am over-rating her, I point out that according to the statistics, her average finish last year was 19th place, while mine was 23rd place.)

Whenever it is that competitive pinball does resume. I haven't heard any rumors from the International Flipper Pinball Association. But I can't imagine them resuming the sanctioning of events until the whole country, or at least the whole pinball-playing country, is safe to open arcades and bowling alleys again. Certainly not before it's okay to have public gatherings of, like, a hundred non-family-members. (Michigan is on ``ten''.)

Pinball At The Zoo, rescheduled for early October, hasn't cancelled yet, but it's got to be readying to. If the schools weren't reopening it might be almost safe by early October, but the plague factories must run and that's going to put us back by months. Maybe it'll be possible to have the kinds of gatherings you'd need for a small pinball event, like Silver Balls In The City or a Fremont tournament, by the end of December. Maybe there'll be the New Year's Eve party at MJS's pole barn. If things go better than they look now.

Let's get back to Fantasy Island. Here's some more prowling around the Kiddieland and Fairy Tale Forest and then the one thing an amusement park just has to have. 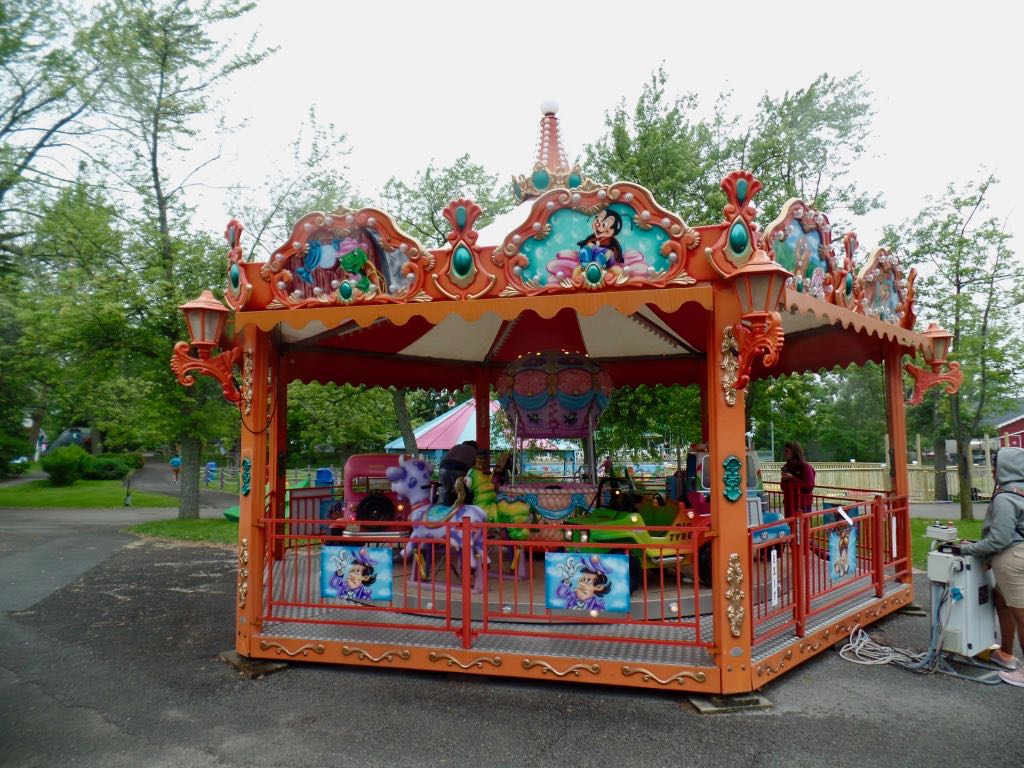 Another kids ride. I think this may have been the Grand Circus Menagerie, which Wikipedia tags as a mix of antique cars, animals, and motorcycles. I wouldn't call those antique cars but I do see the purple cow. 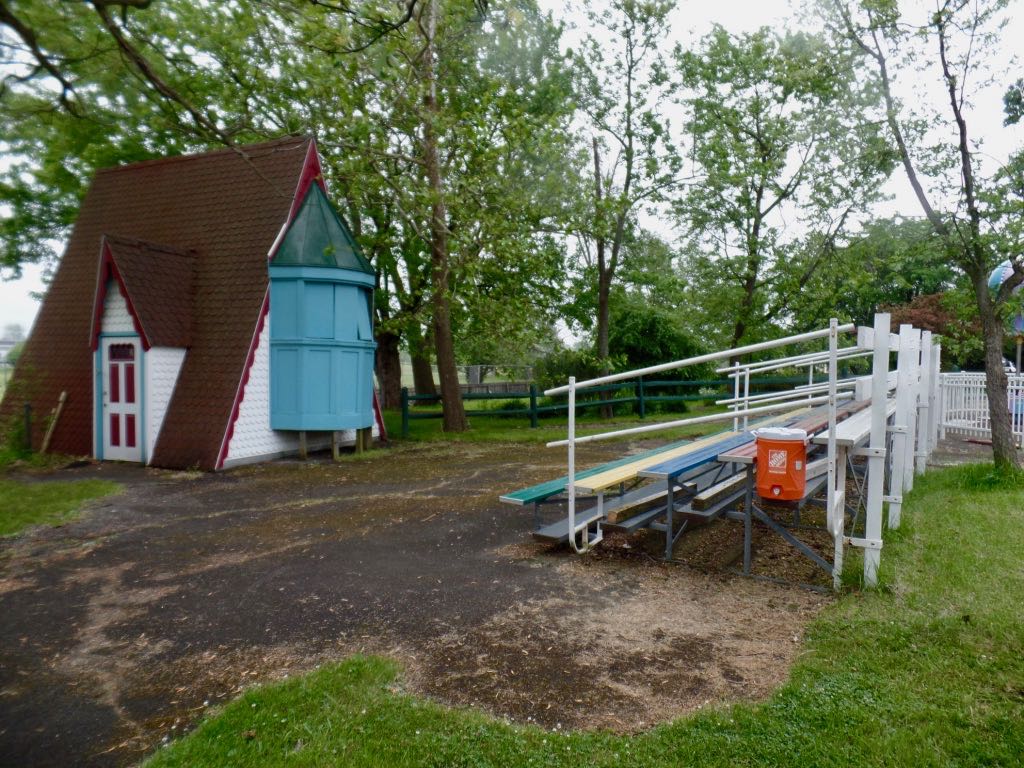 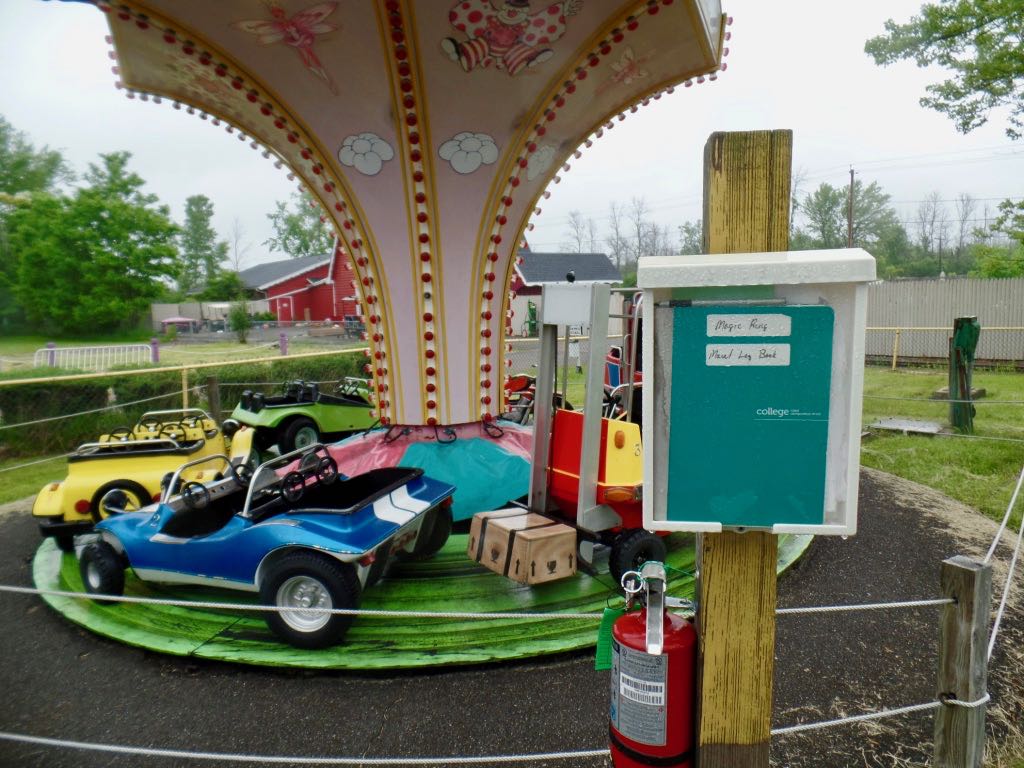 Magic Ring, another kiddieland ride, and the Magic Ring Maint Log Book, because I love that sort of operational detail. There's a notebook and a pen in there. 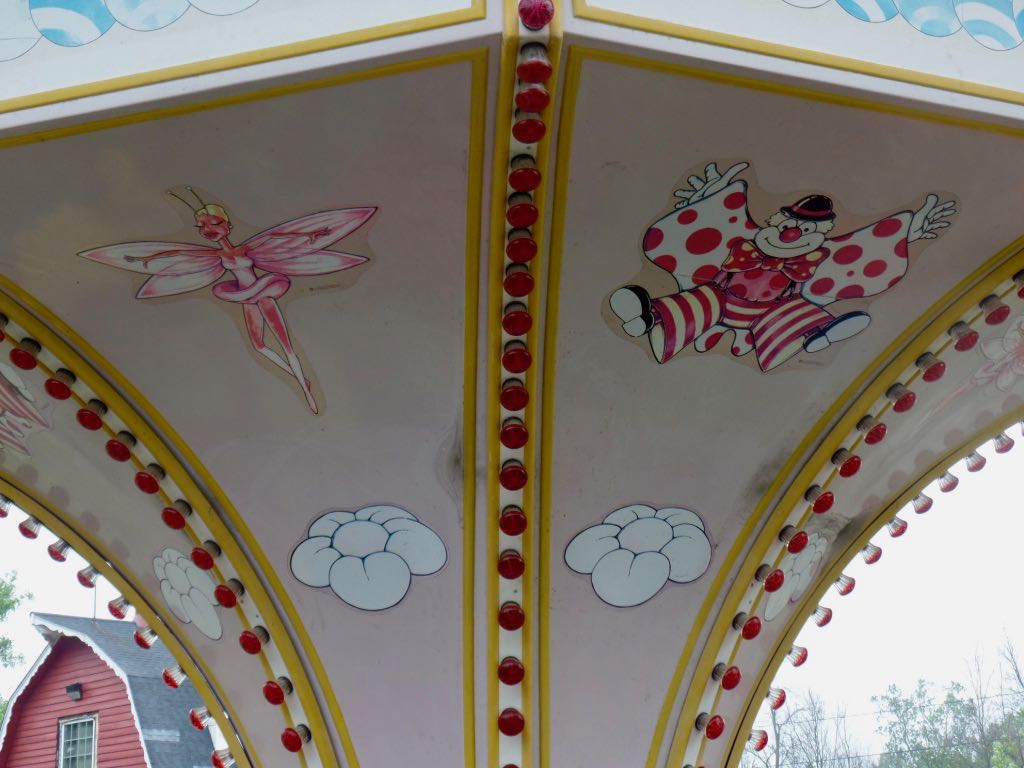 Fairy and clown figures on top of the Magic Ring. The ride itself dated to 1961 and the art tracks with that. 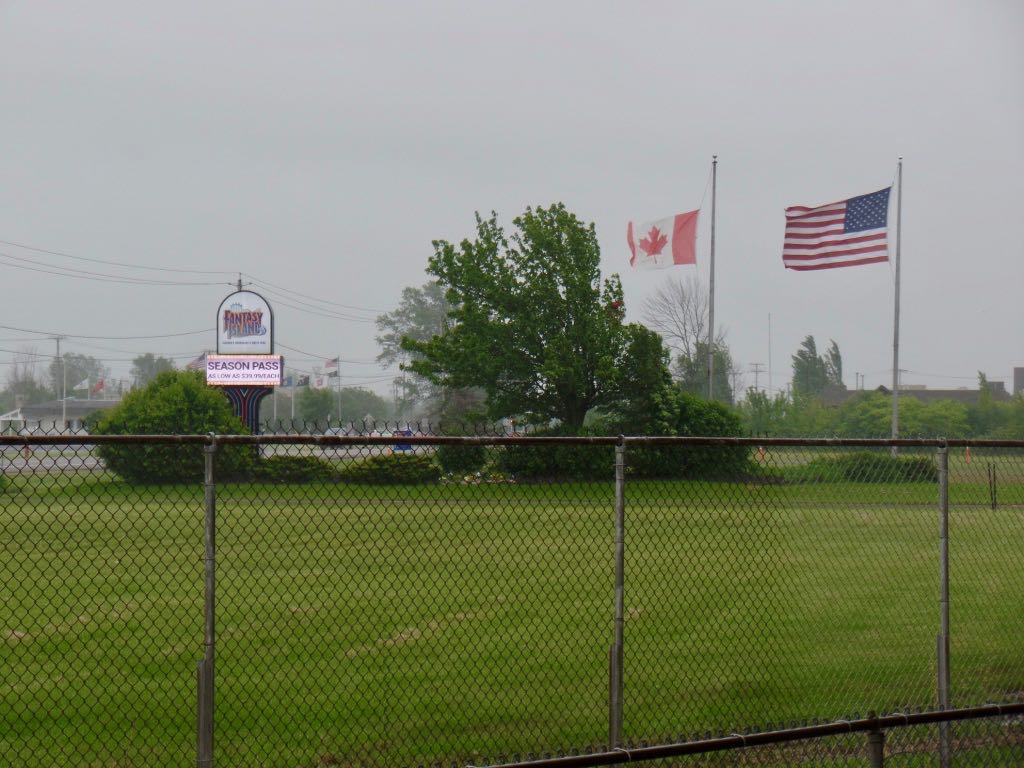 Looking from the park out to the main entrance. You can see what kind of day we were facing. 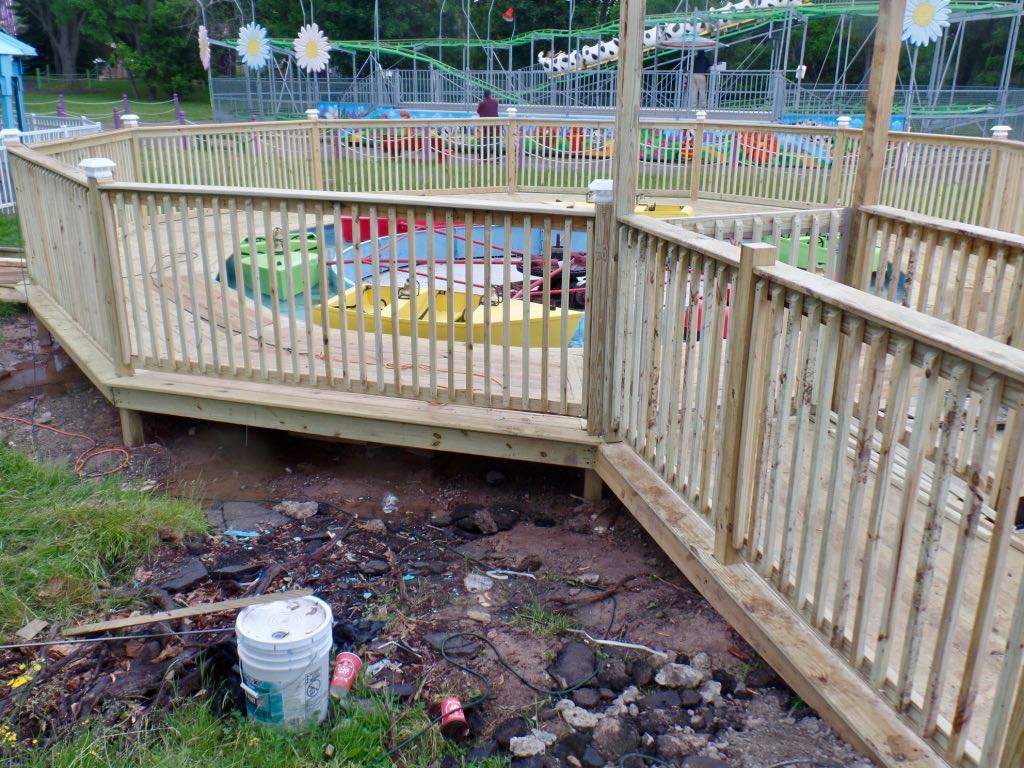 Boats, I assume, another of the park's original rides but here in the midst of maintenance. Notice Max's Doggy Dog Coaster in the back. 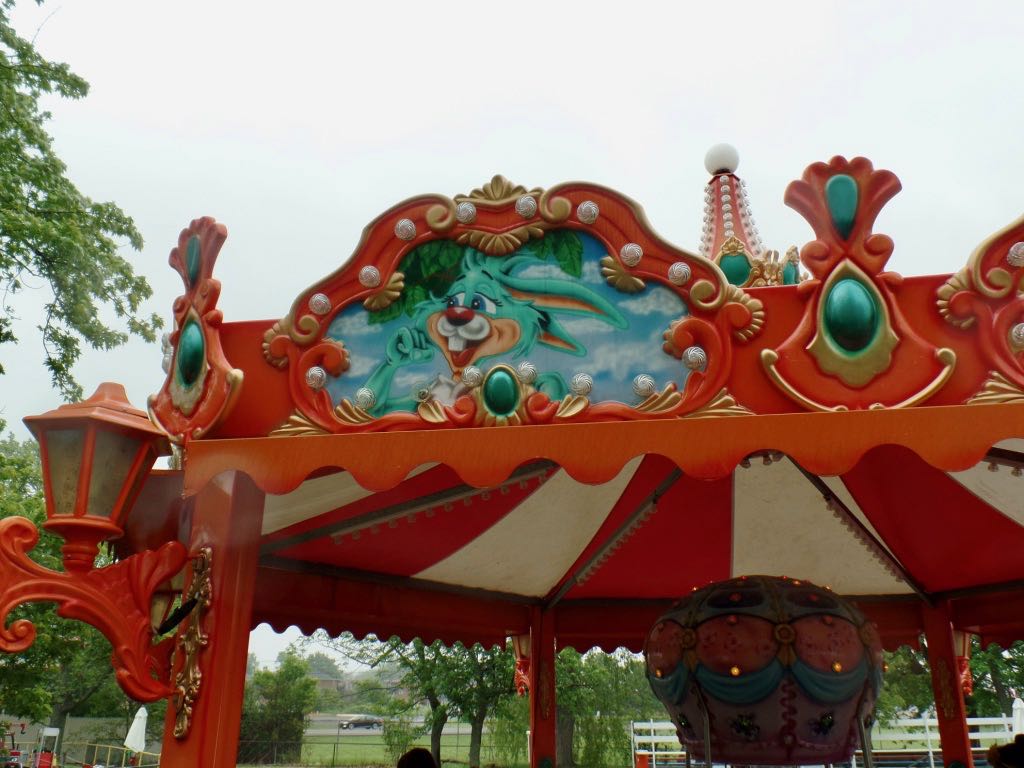 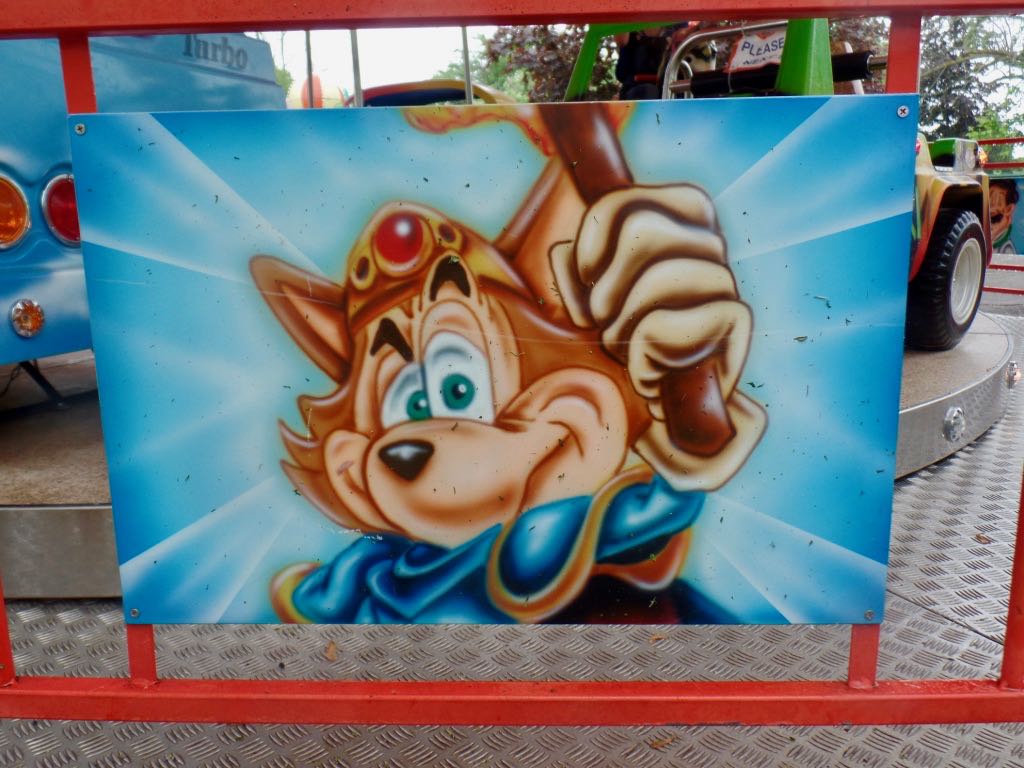 Also ... heeeey, I recognize that wolf with the magic tiara! We saw that same art back at Bowcraft, on the back of a truck ride. 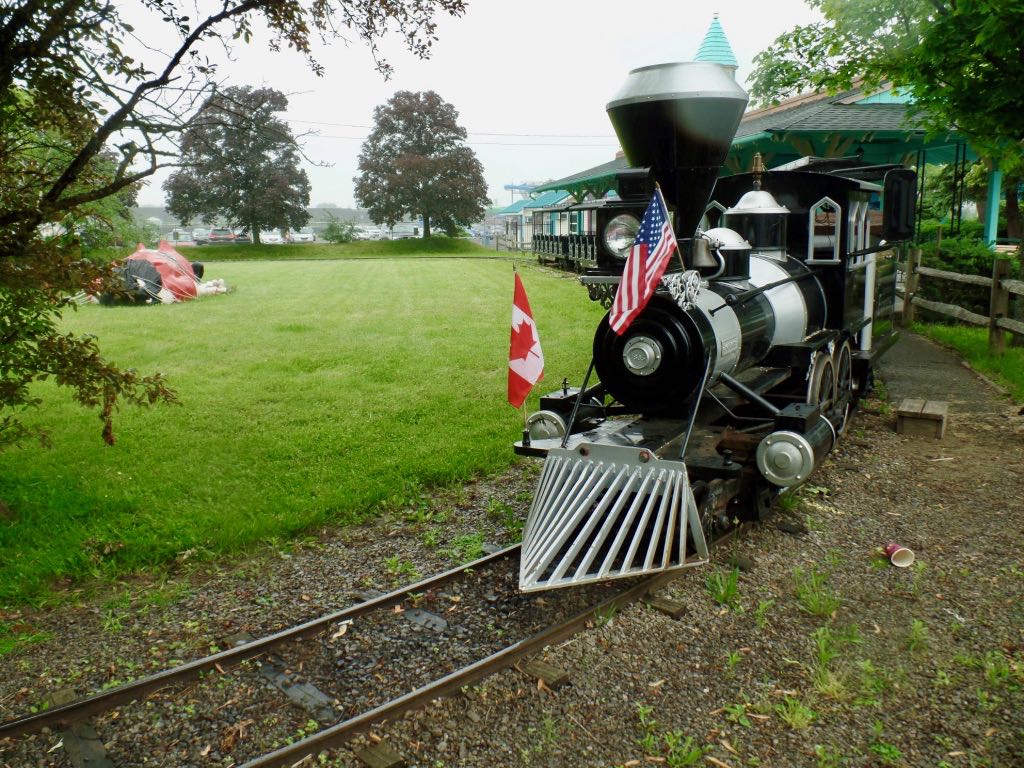 The train ride, apparently originally named Iron Horse and renamed Fanta Se (which tickles me). Unfortunately it wasn't running the day we visited. 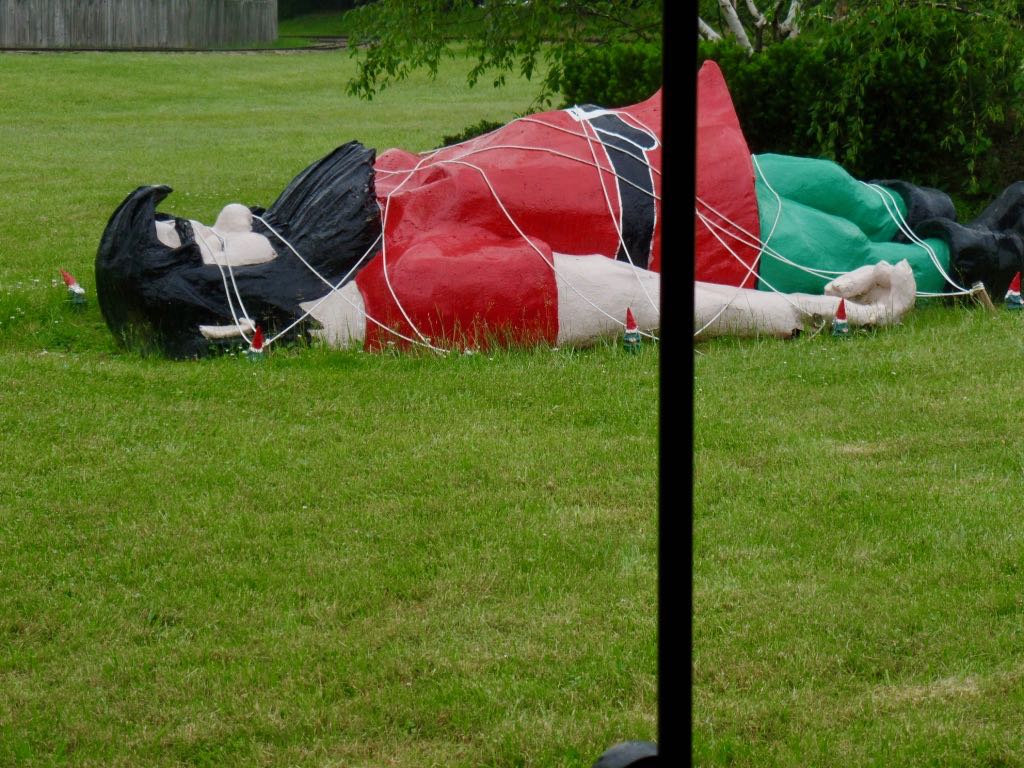 Gulliver, bound by garden gnomes. I read somewhere that he had started out as a different figure --- maybe the beanstalk's giant? --- and was repurposed as Gulliver when that was easier to maintain or something. In the closing of Fantasy Island someone local was able to grab the statue for themselves and bring it to their home, so at least some things are staying in the area. 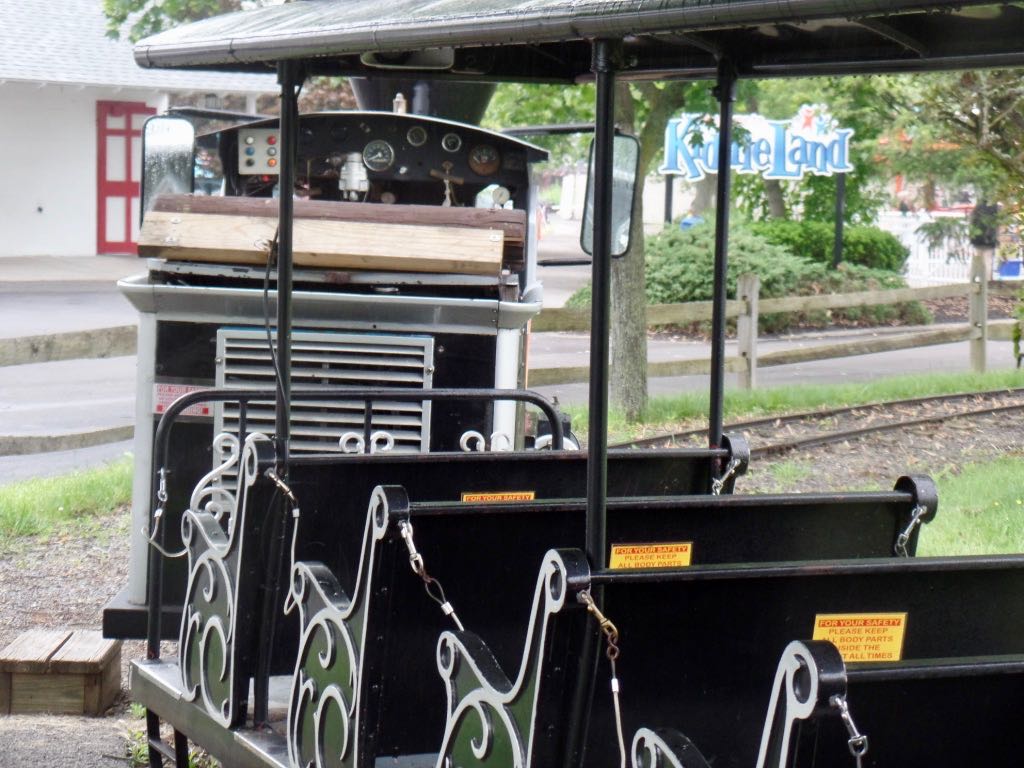 A look at the Fanta Se's seats, and engine. 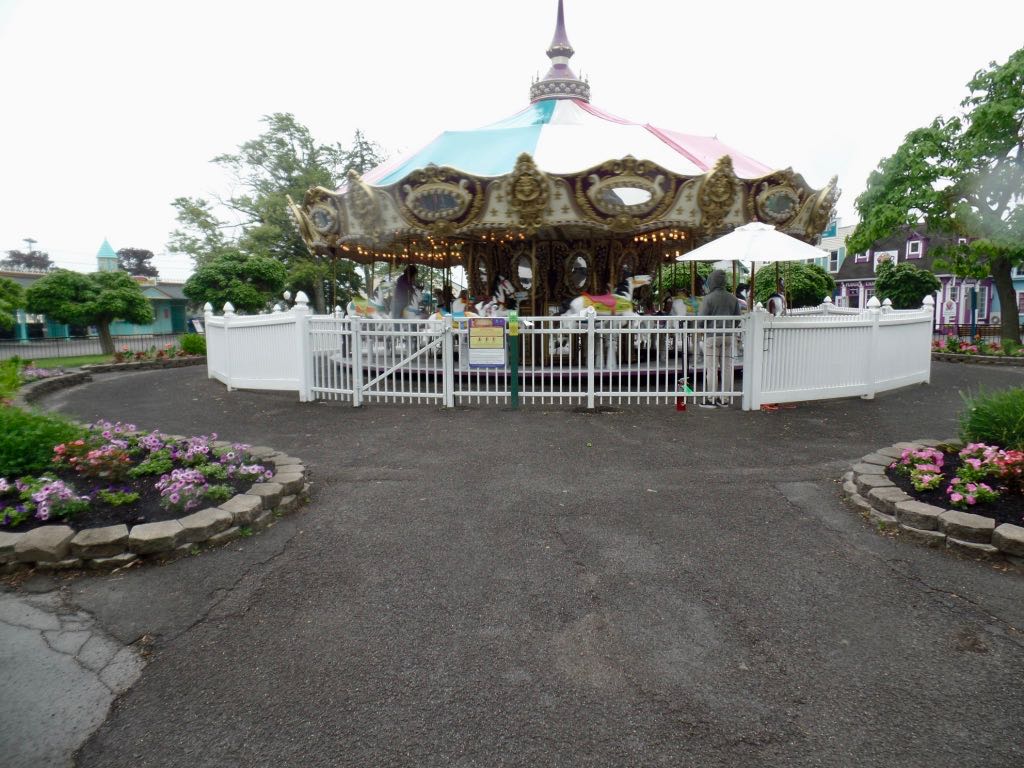 And here at last we approach the carousel. It's a Chance fiberglass carousel, much like you'd see at any travelling carnival. 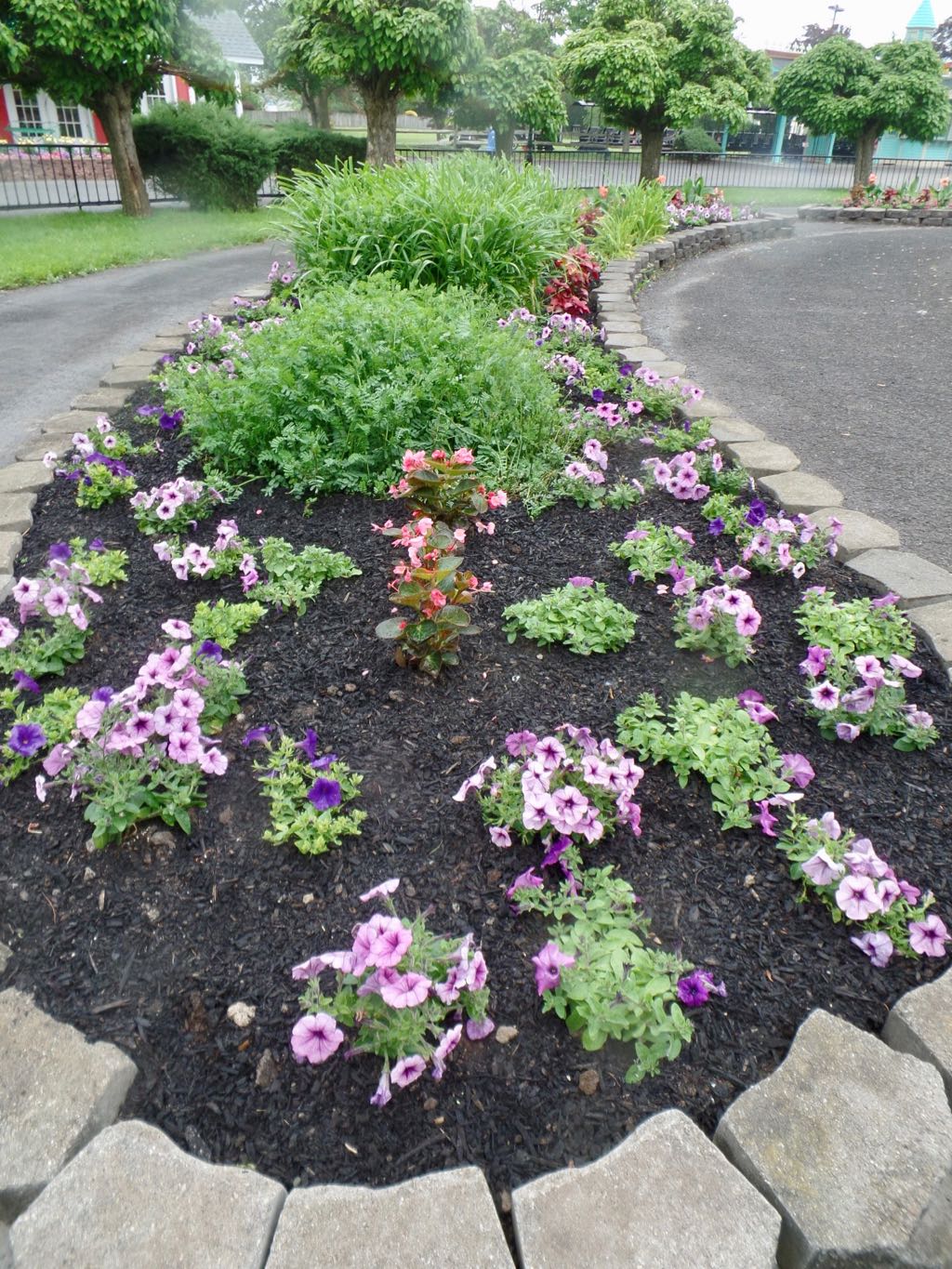 Flower bed surrounding the carousel. It's a nice bit of decoration and the overcast skies helped the flowers look sharp. 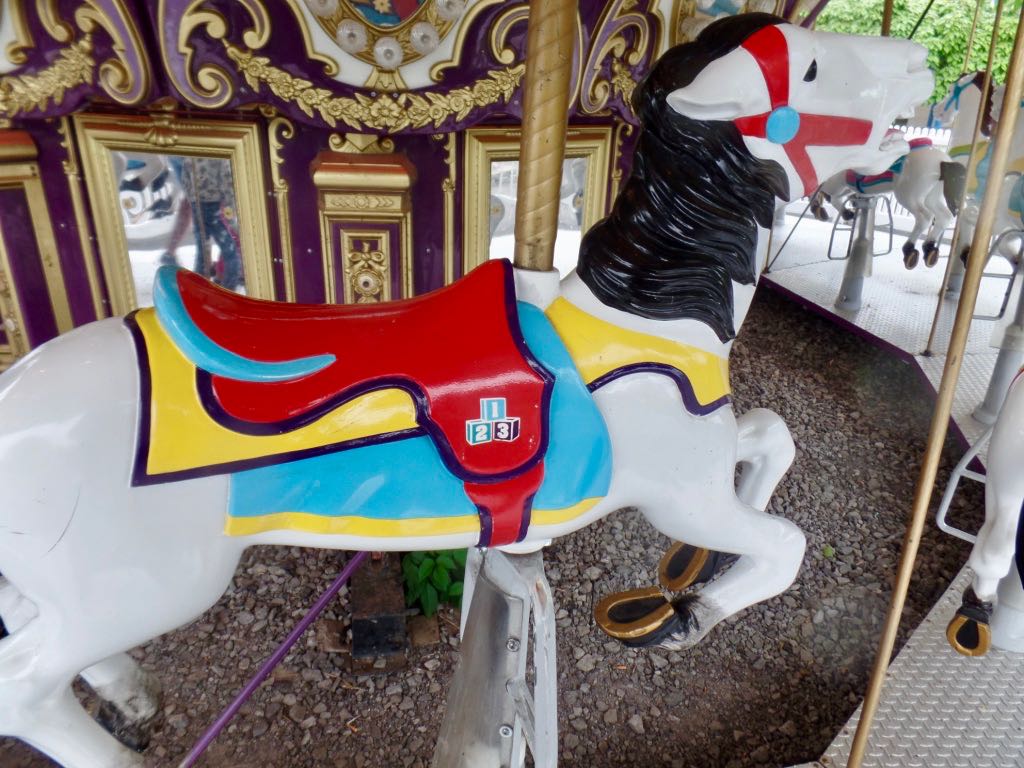 One of the carousel horses. The toy 1-2-3 blocks underscore what a kids' park the place was. 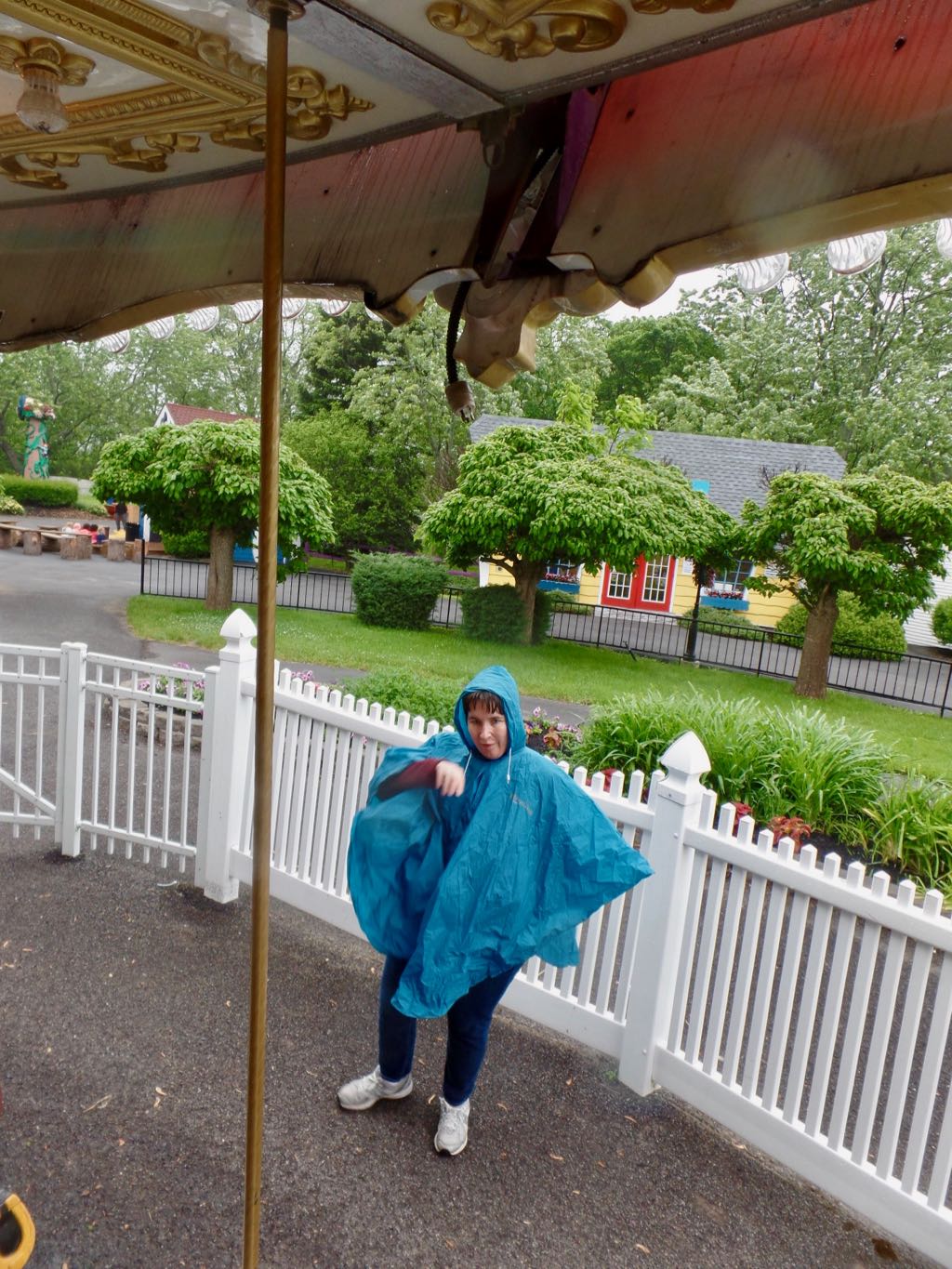 bunny_hugger considering her photographs of the carousel. (It happens a picture of this carousel is her calendar photograph for August, so it's possible that this is a picture of her taking that picture.) 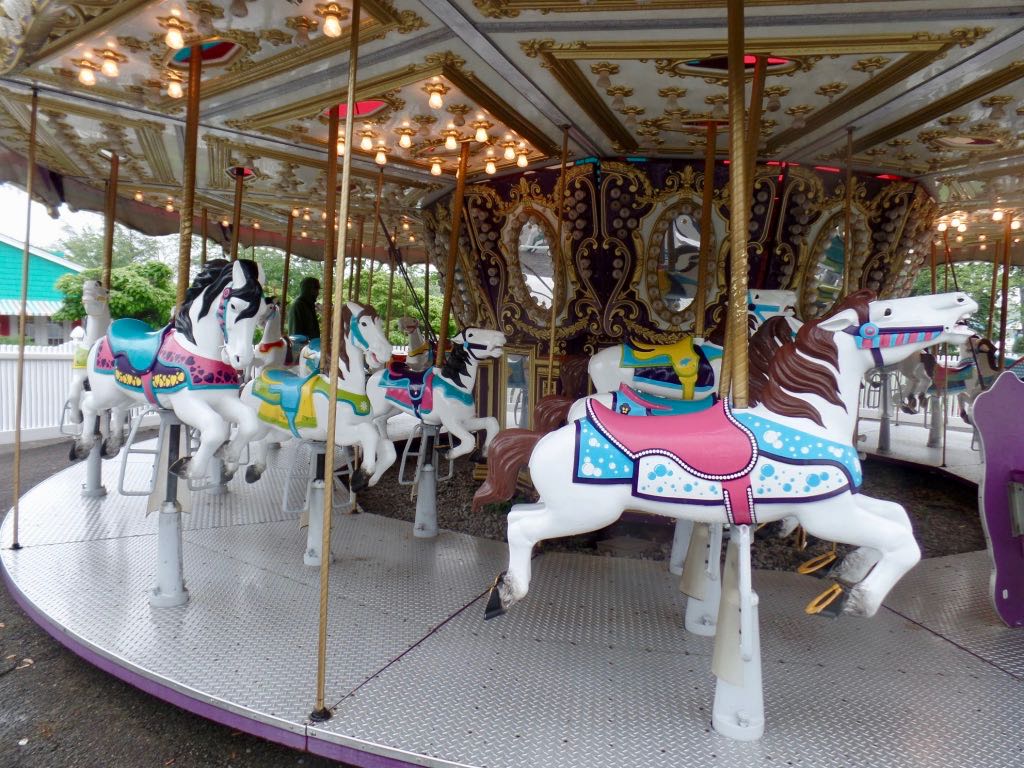 The horses on the carousel. The paint's in good shape even if it's not ornate.

PS: Using my A to Z Archives: Into, one of those little words that gets you in trouble.