Of course I want attention for my mathematics blog. Not enough to do anything about it more than include cryptic links to it from over here, but still, attention. To that end, here's pieces that I've run over there recently:

And we have a bit of a special 60s Popeye: Swee'Pea Soup plus a cartoon I noped out of. Swee'pea Soup I liked enough to almost forget the other one.

Now let's get back to Fantasy Island, June of 2019, and the other show we saw there. 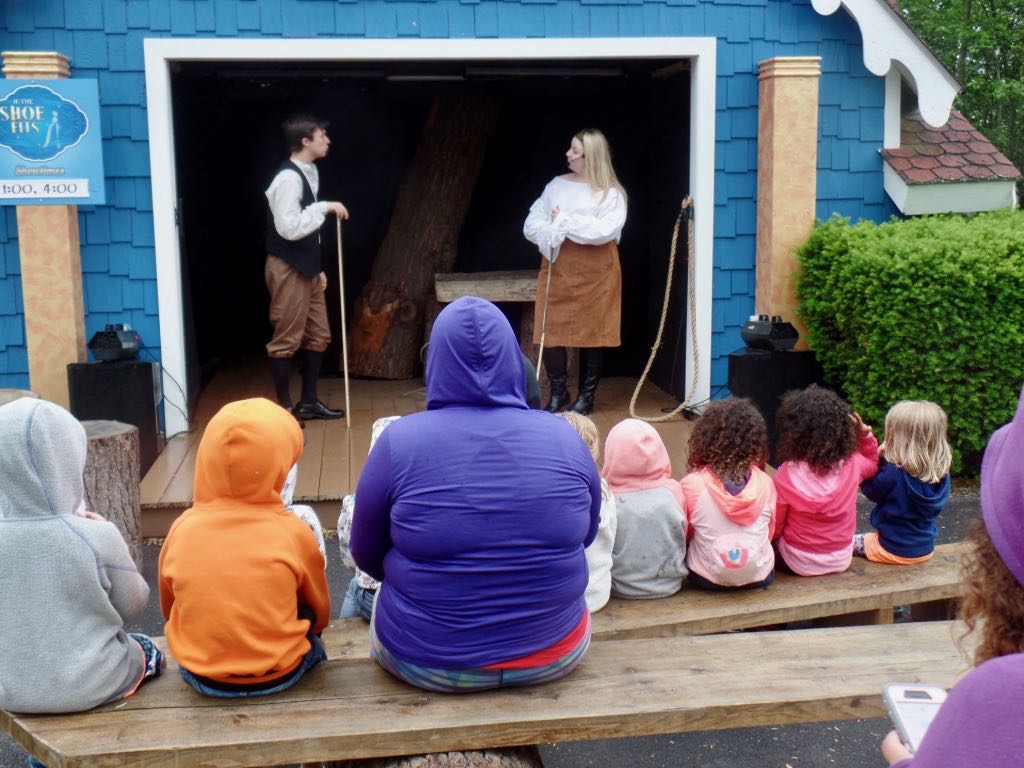 The show at the Fairy Tale Forest's stage. The title card says ``If The Shoe Fits'' and that title makes no sense for the contents. 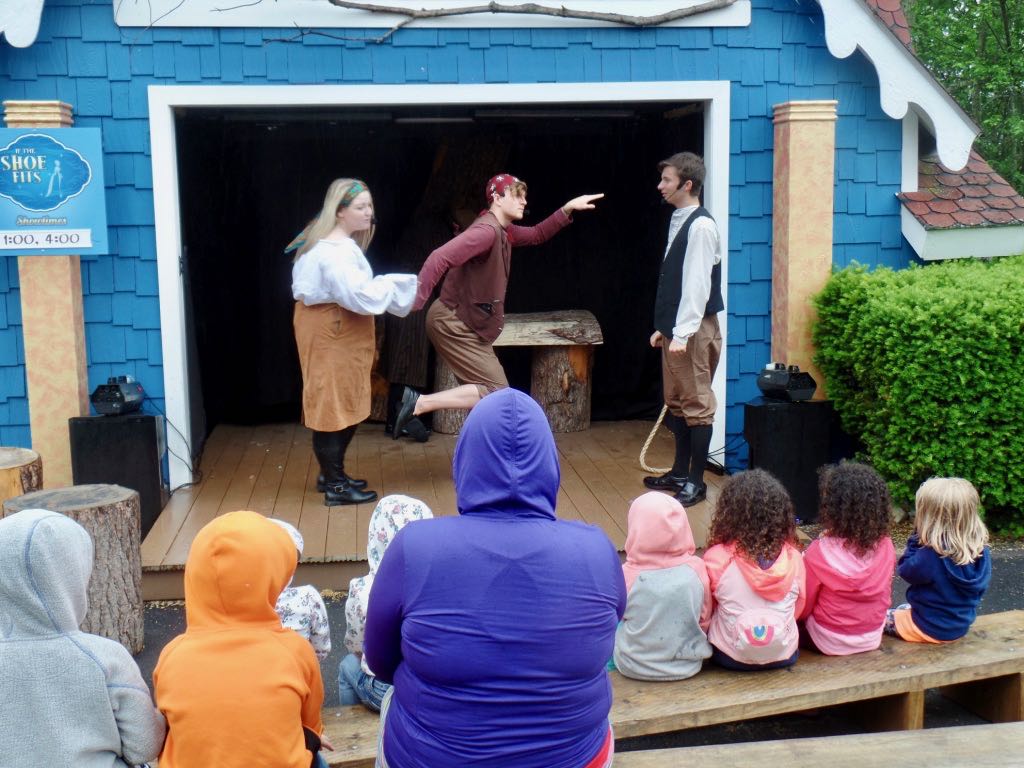 The show we watched had the prince, played by the Sheriff from earlier, being this general screw-up who needs his majordomo, played by the Deputy, to help him through his rash decision to challenge semi-competent pirates at something. 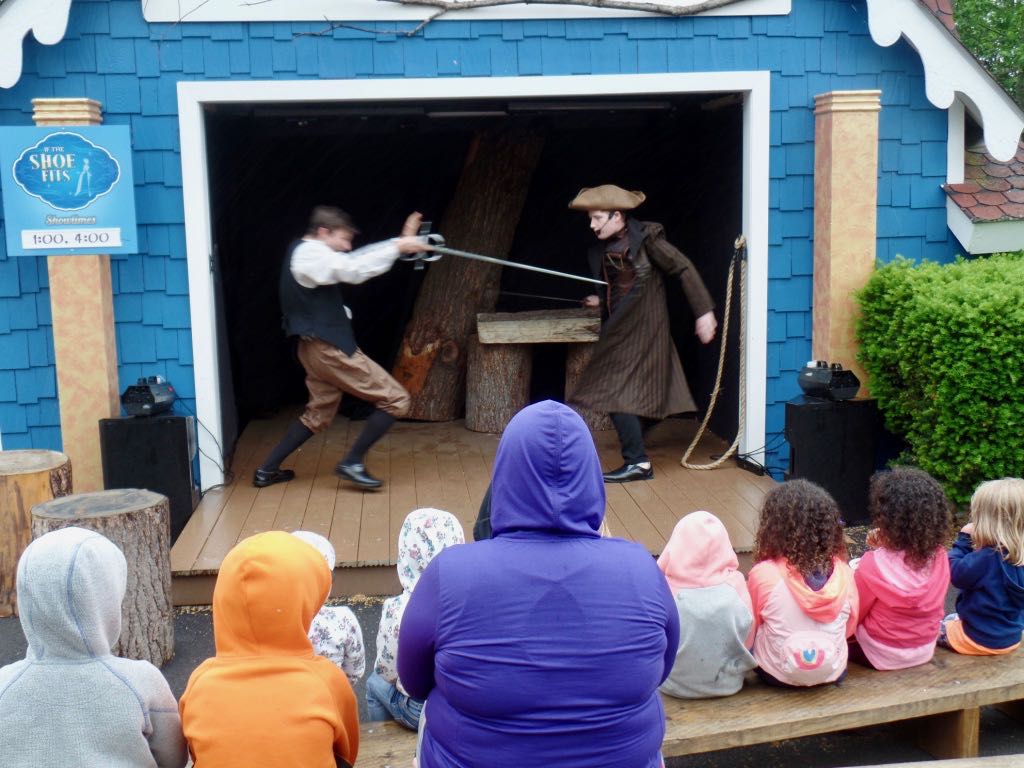 But we get to sword-fighting! Which is pretty exciting to see. 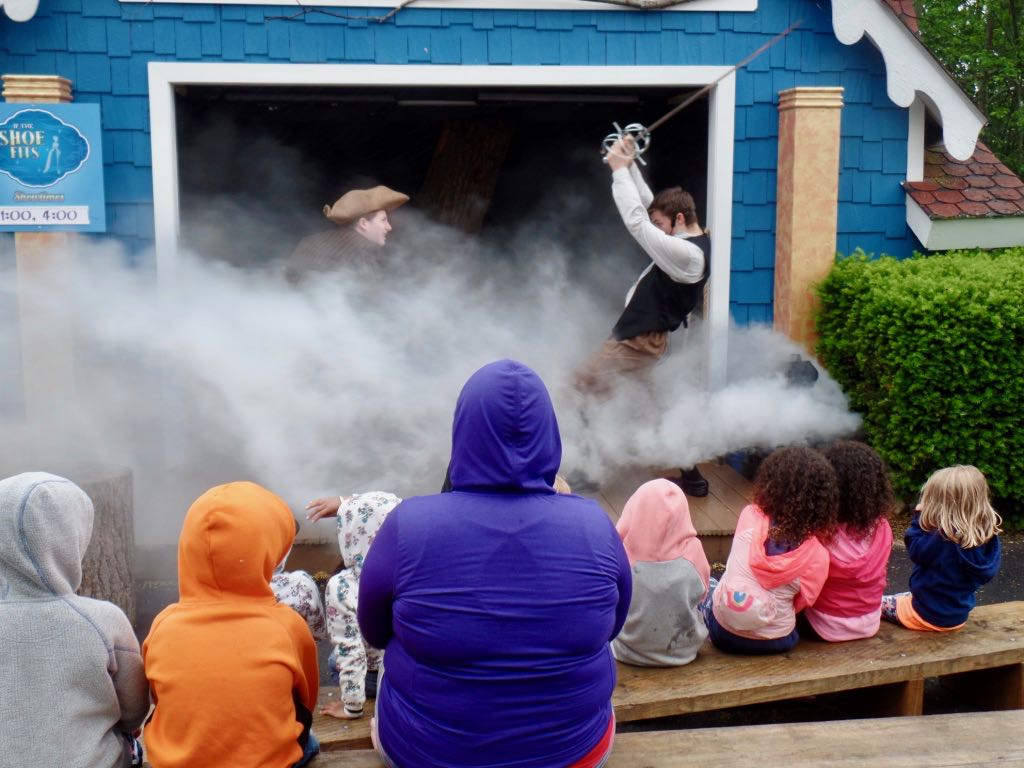 Does our hero get his act together and finally win? ... Well, yeah, how about that? 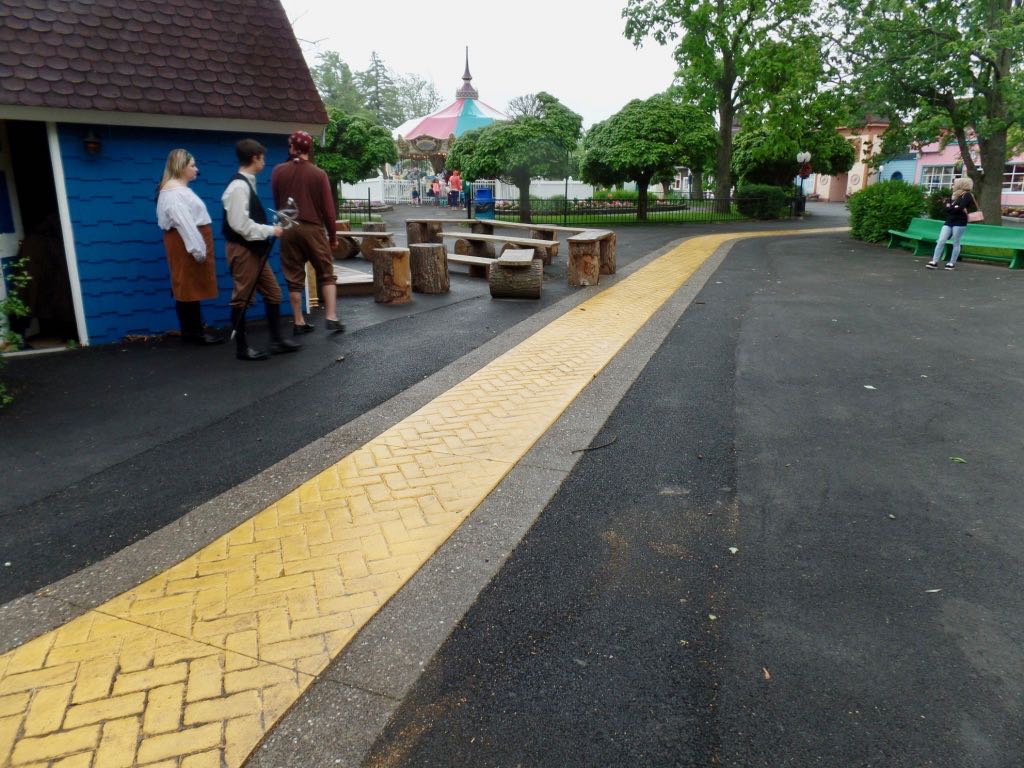 Show's over and the performers go back to prepare for the 5:00 Wild West Shootout. The Yellow Brick Road leads the way. 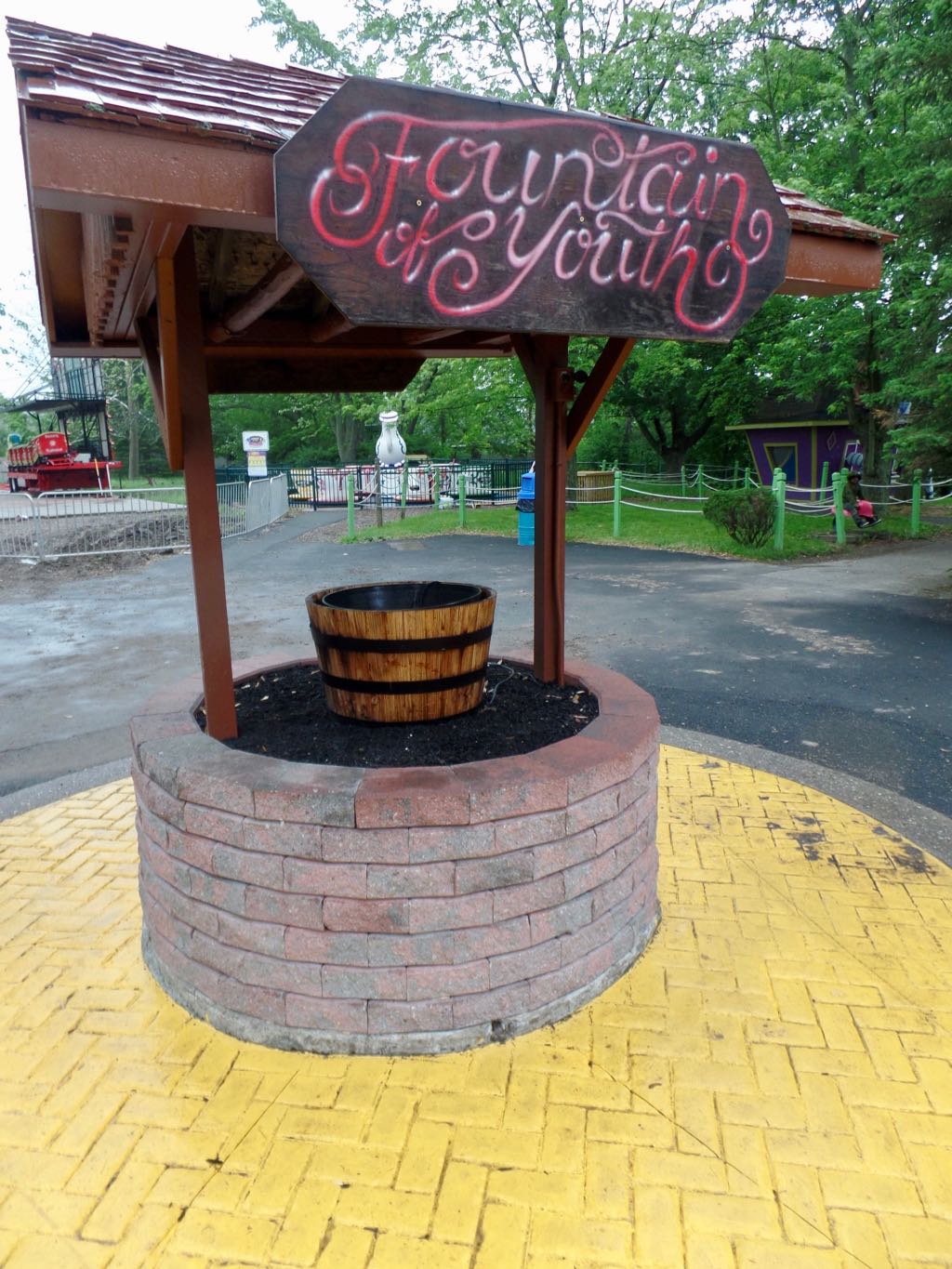 Ah yes, the famous item one finds at the end of the Yellow Brick Road: the Fountain of Youth. 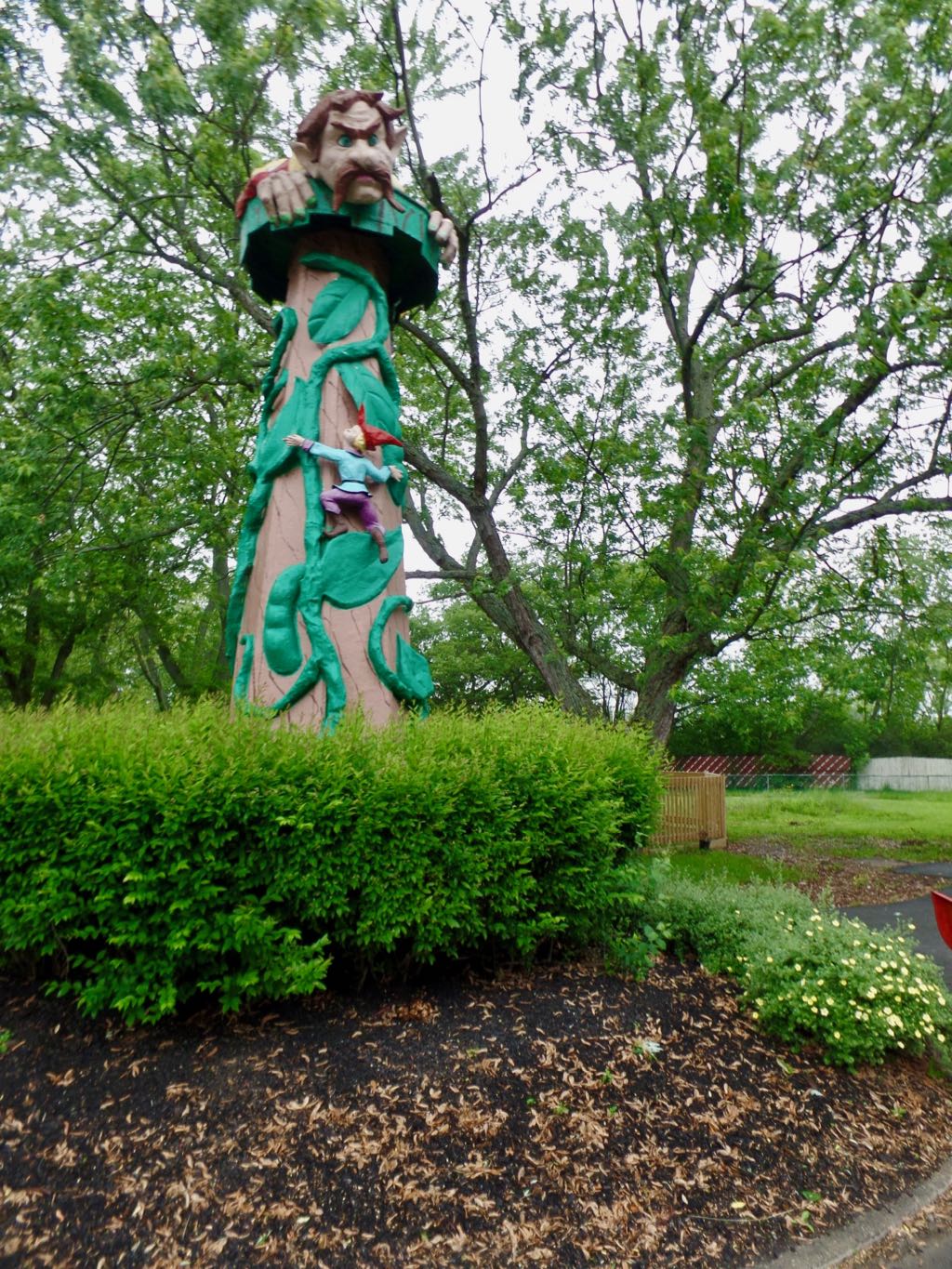 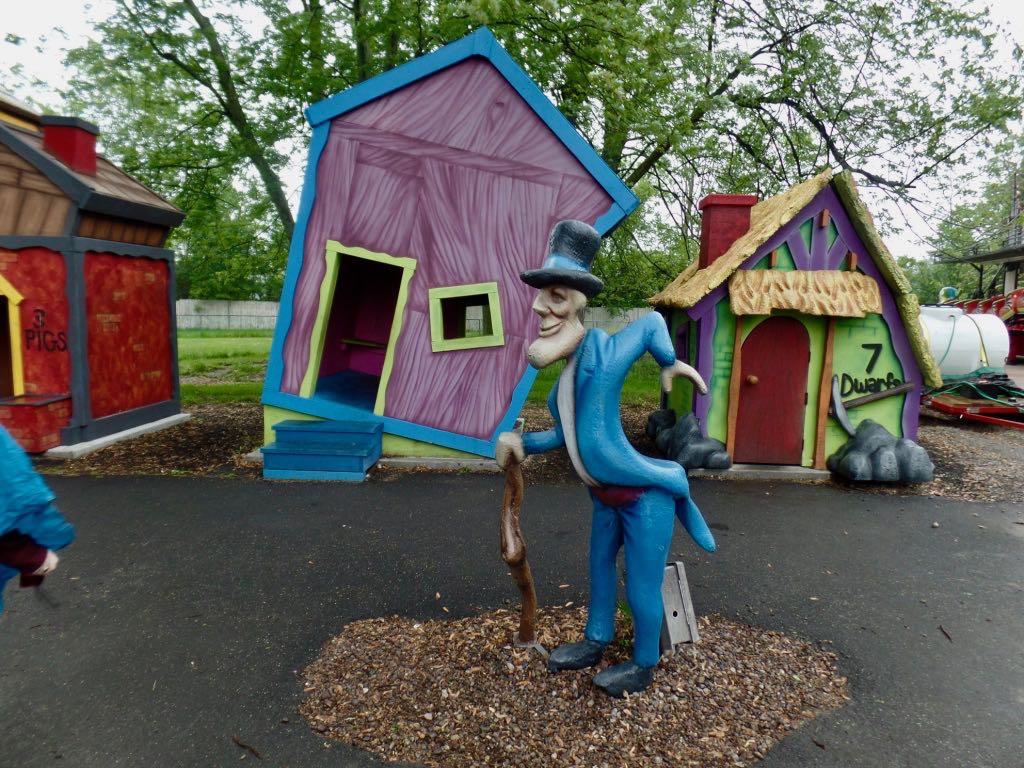 Ah, it's the Crooked Man and his Crooked House, much as at Idlewild or Story Book Land. 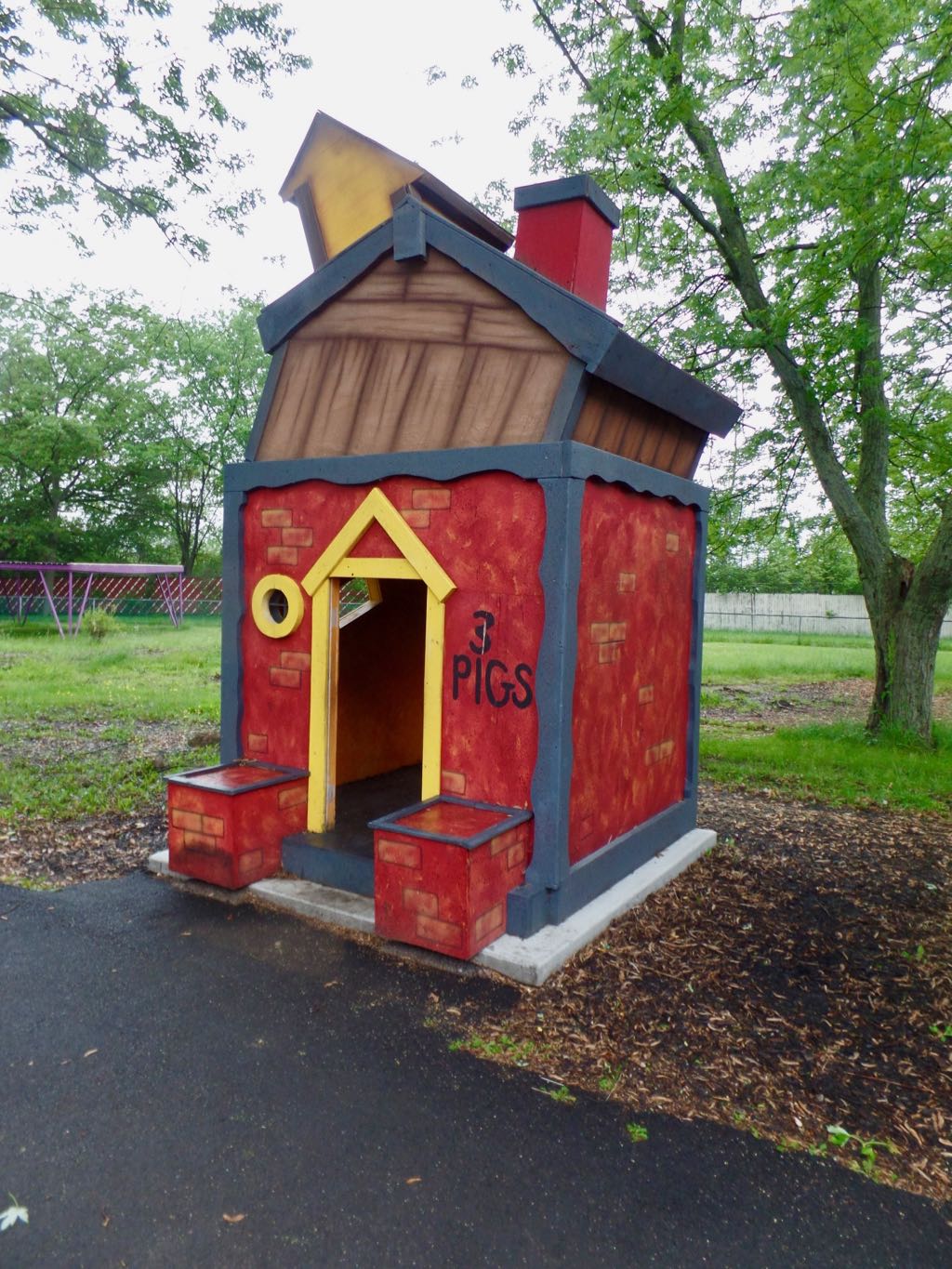 Did not know the Three Pigs built a high-rise. 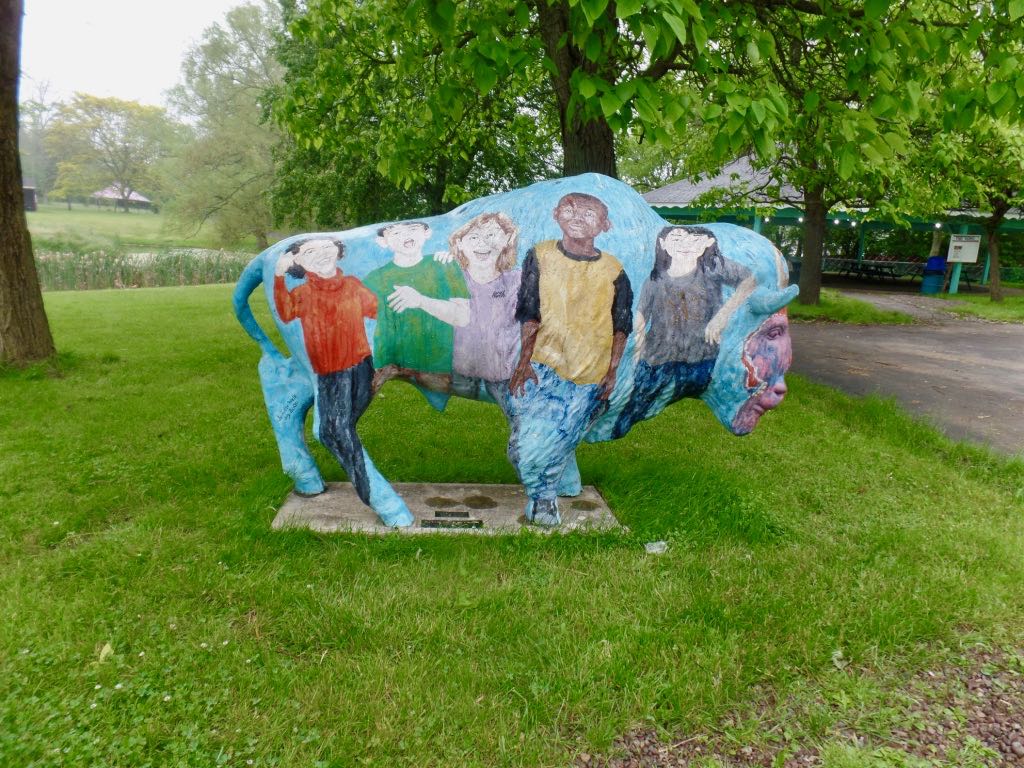 A buffalo painted with kid figures. I assume this is a Buffalo-region thing. That it's buffalo, I mean; I know about having a metro region make a bunch of statues of the same kind and have locals paint it in wild ways. 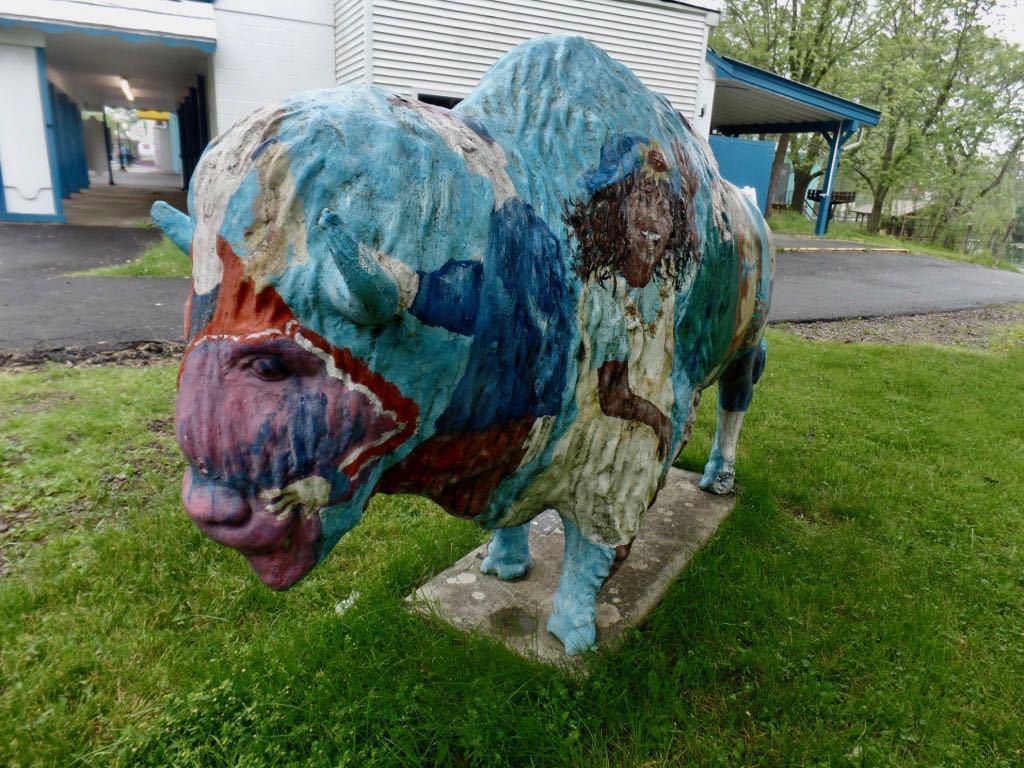 Another look at the painted buffalo and incidentally a shot down the western midway too. 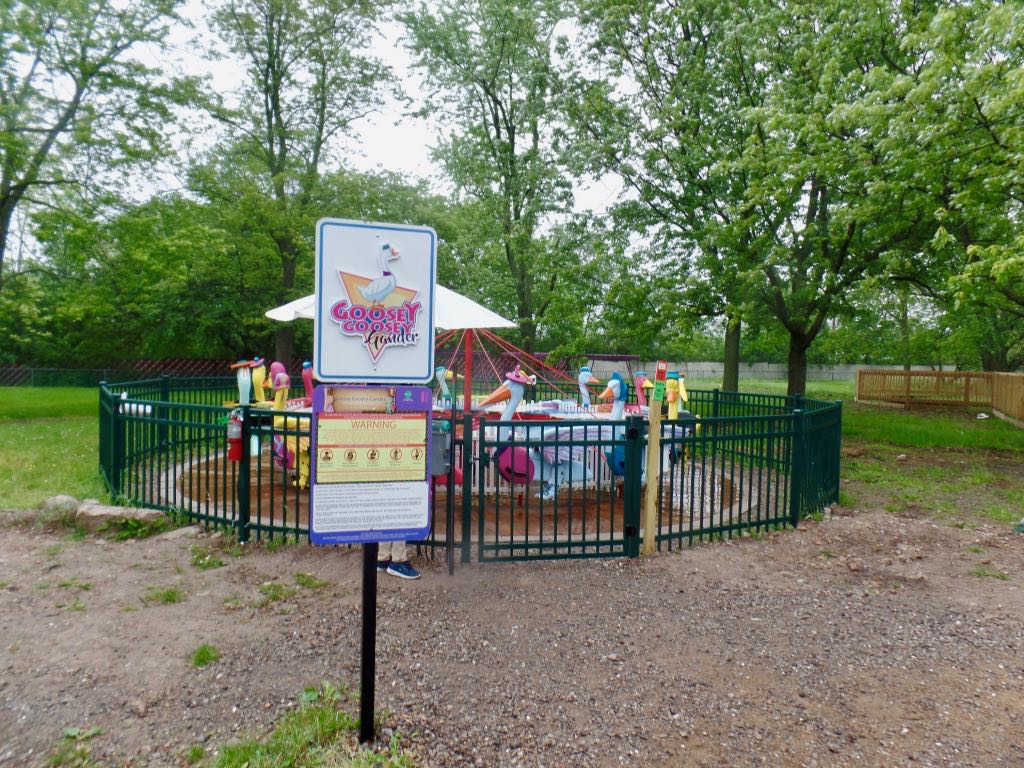 Goosey Goosey Gander, before 2018 called Blue Goose. We did not know what this was but knew it was something special, and to our regret there weren't any kids coming back to ride the thing so we could see it in motion. 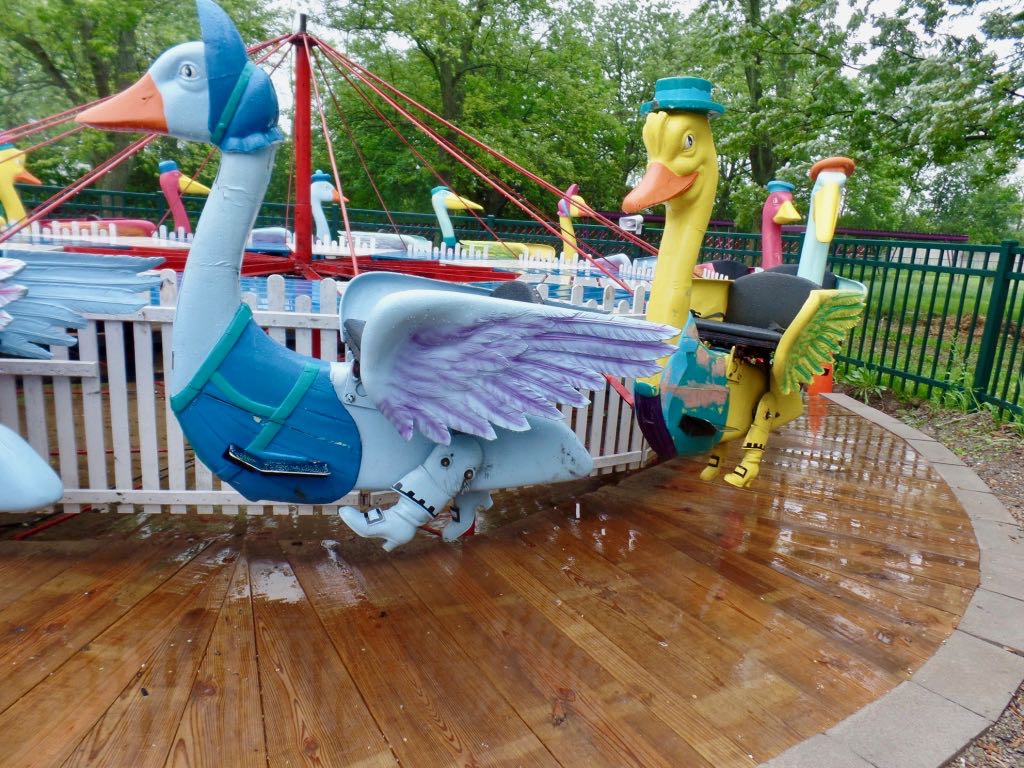 It's a simple enough circular ride, but it sure looked like the legs should move. Our research says yes: as the cars move in cicles the legs should run forward and back. This was a long-beloved ride at Fantasy Island, but was sold off in the 90s. 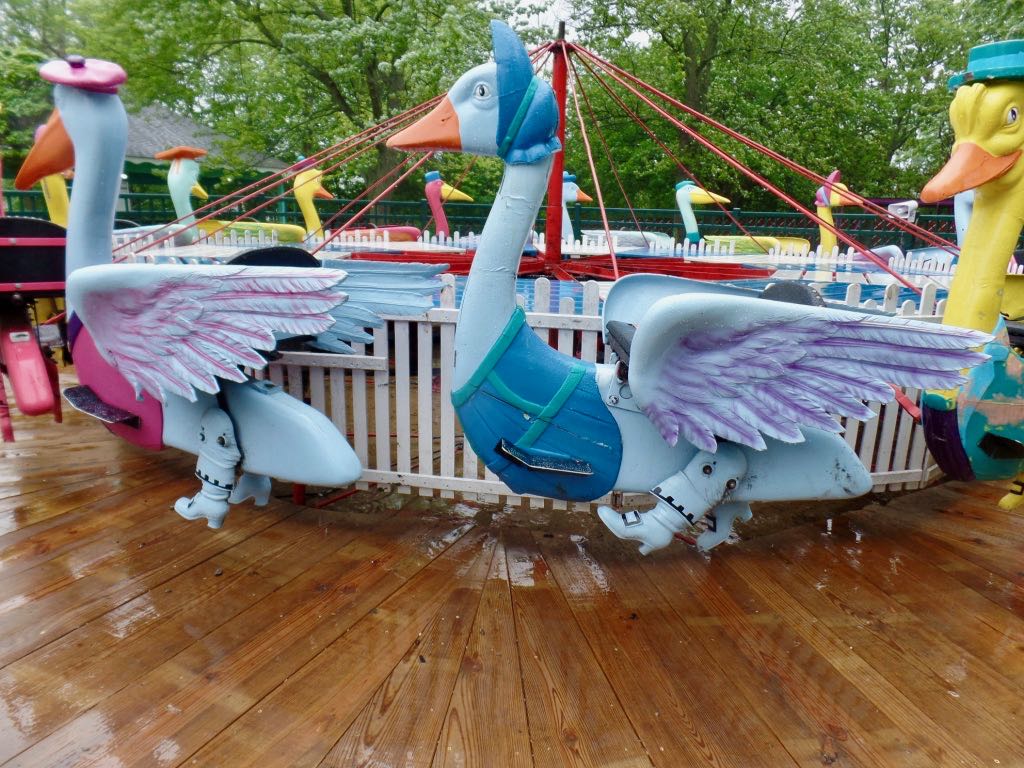 And in 2011, for the park's 50th Anniversary, the ride was found, bought, and restored to the park. (This is why I find it plausible that that roller coaster was a ride returned to the park, too.) 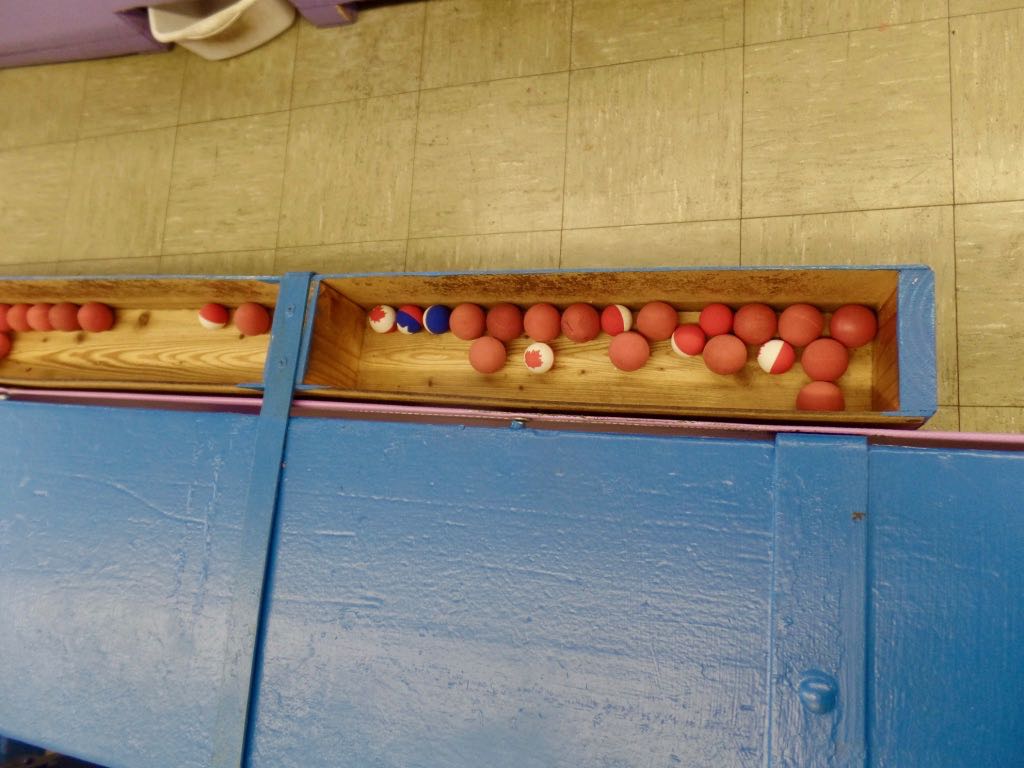 On to a midway game. Why all these rubber balls, some of them with Canada-flag maple leaves on them, and others with United States-flag stars? 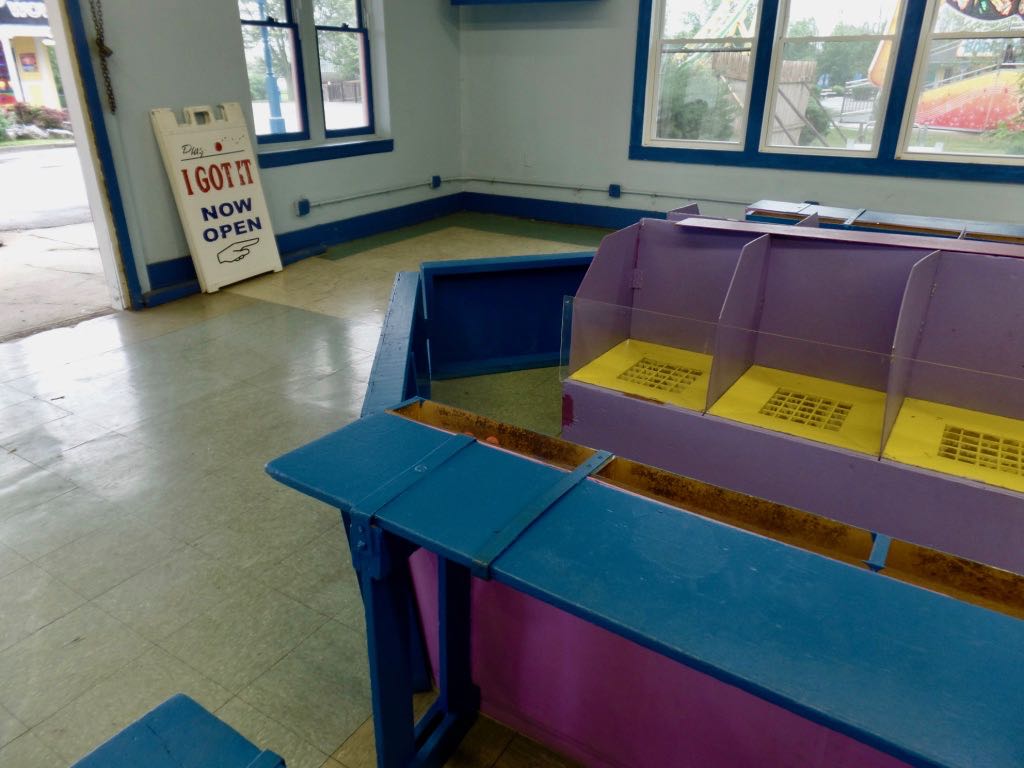 They're for playing I Got It, a sort of low-tech Fascination game. You sit behind the blue counter and toss, one at a time, balls in to the grid there. When you get a bingo you call out ``I got it!'' First caller with a valid bingo wins.

Trivia: The treaty by which the United States bought Spain's claim to Florida, in 1819, also included the establishment of the 42nd Parallel as the northern border between (New Spanish) California and the Oregon country. Source: Prisoners of Geography: Ten Maps that Explain Everything About the World, Tim Marshall. (About half a year after the treaty went into effect, in 1821, Spain acknowledged Mexican independence.)

bunny_hugger's semester starts tomorrow. She's teaching exclusively online, mercifully. Still, the university has, as of the time this posts, seven hours and 50 minutes to stop the catastrophe. And they won't do it.