Well I was just a boy, out there on my own

bunny_hugger yesterday asked where I was going to go on my walk, and I said I didn't know; I'd find out when I got to the end of the street. I try not planning out my walks too much, unless I know, like, that we need a couple things from the grocery or whatnot. Keeps things fresher. I ended up walking to Downtown East Lansing, a hike about two and a half miles long. And noticed that Curious, the used book store, was open. So, yes, reader, I ducked in, and looked around the two open floors of the building. (They have an upstairs too, that you can only get to from the outside door. It's quirky.) And bought a couple books there, my first purchase from them ... obviously since February, possibly since last year. It was nice to get a visit in before Michigan State University gets back into things and we have to lock the area down again.

Afterward I realized there was a book

bunny_hugger needed, and while she has plans to go to her office (where there's a copy) sometime, I might have been able to pick up a copy for two or three bucks and at least reduced the chore load some. Well, next time.

We're coming now near the end of our day at Fantasy Island. Here's what we were looking at and thinking about in June 2019. 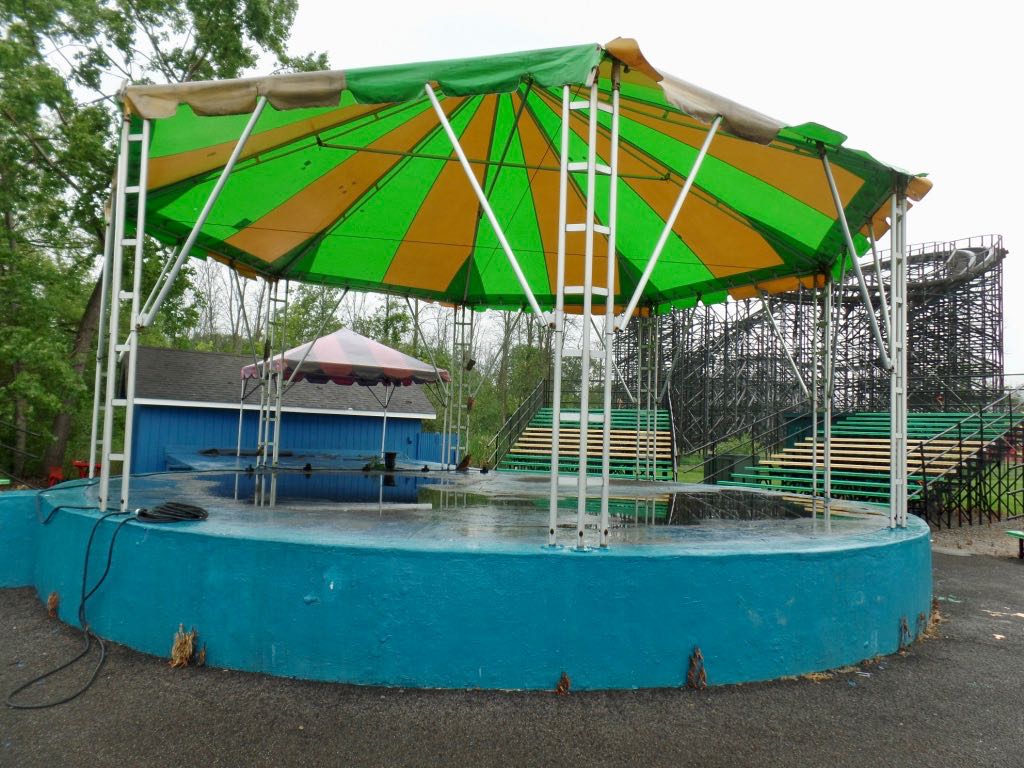 And here's the main performance stage for the park, towards the western side and near the turnaround for Silver Comet. 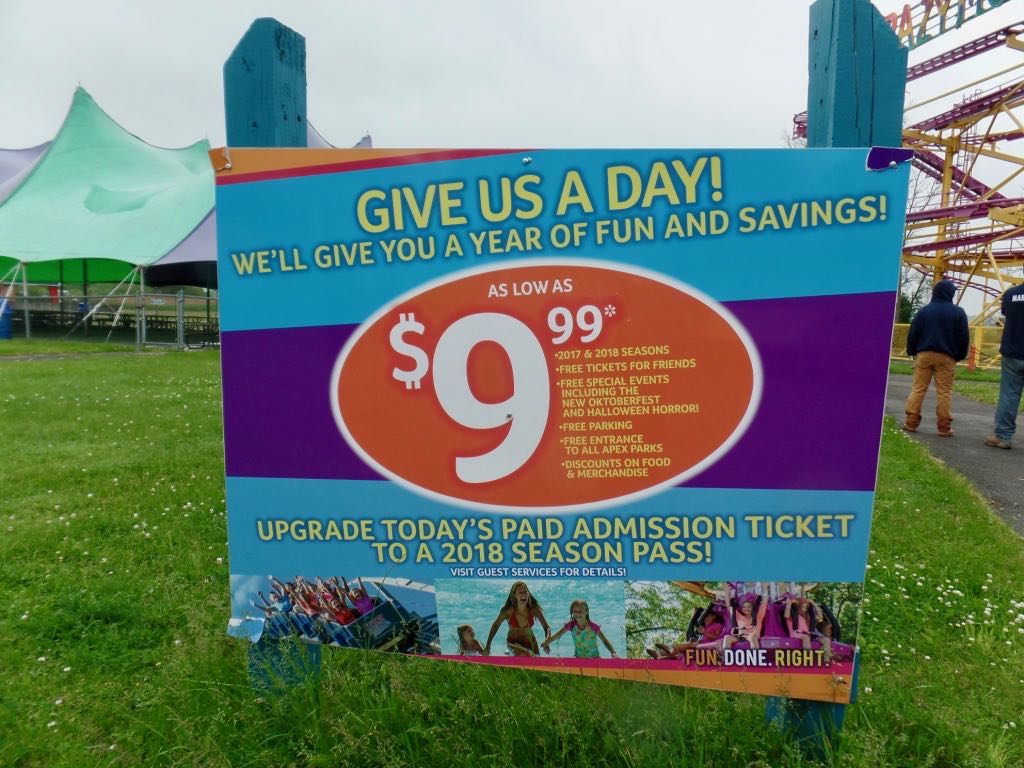 Oh hey, that looks like a great deal for a season pass! Free entrance to all Apex parks, which, great for Indiana Beach! Plus the Halloween events. And look at that, it's good for the 2017 and 2018 seasons! ... Wait a minute, we visited this park in June of 2019! 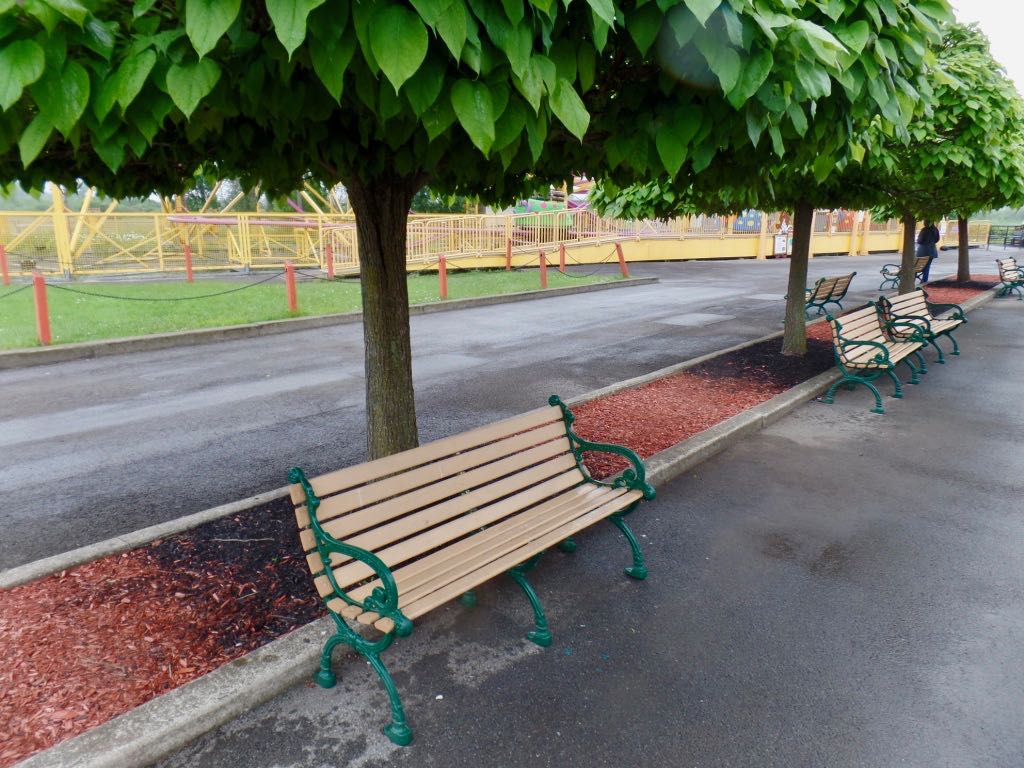 Benches and trees along the way to the Wild Mouse, which you can see in the background. So if you need decoration ideas for Roller Coaster Tycoon, consider this. 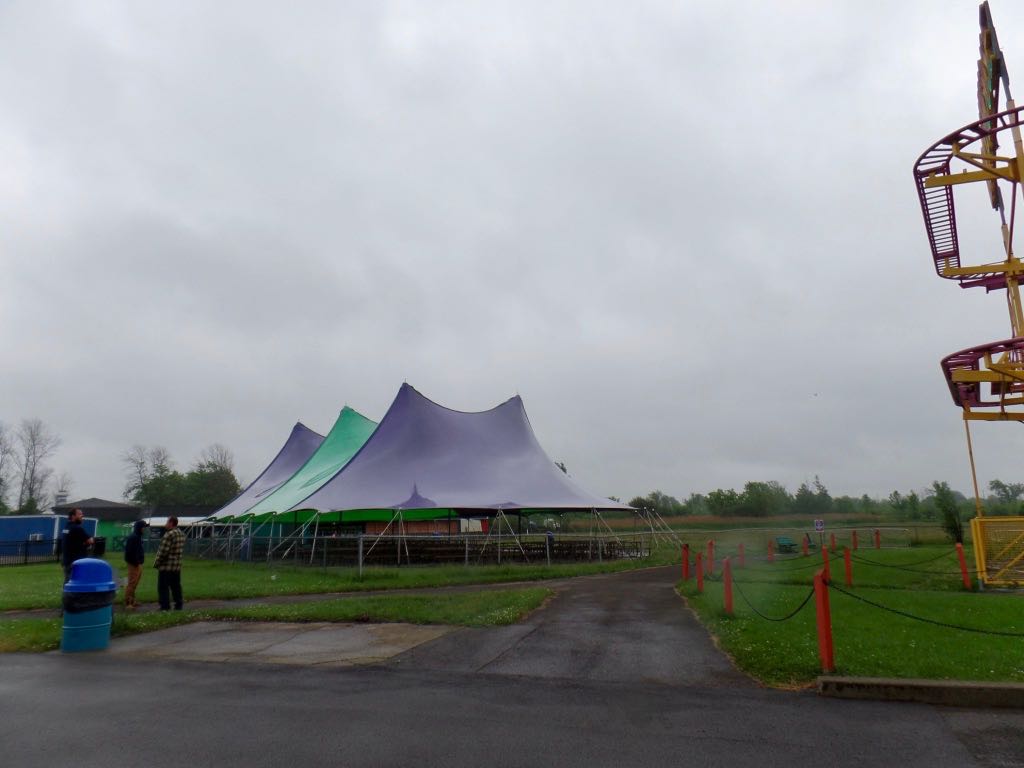 A look at some of the picnic pavilions and what cheerful skies we faced. 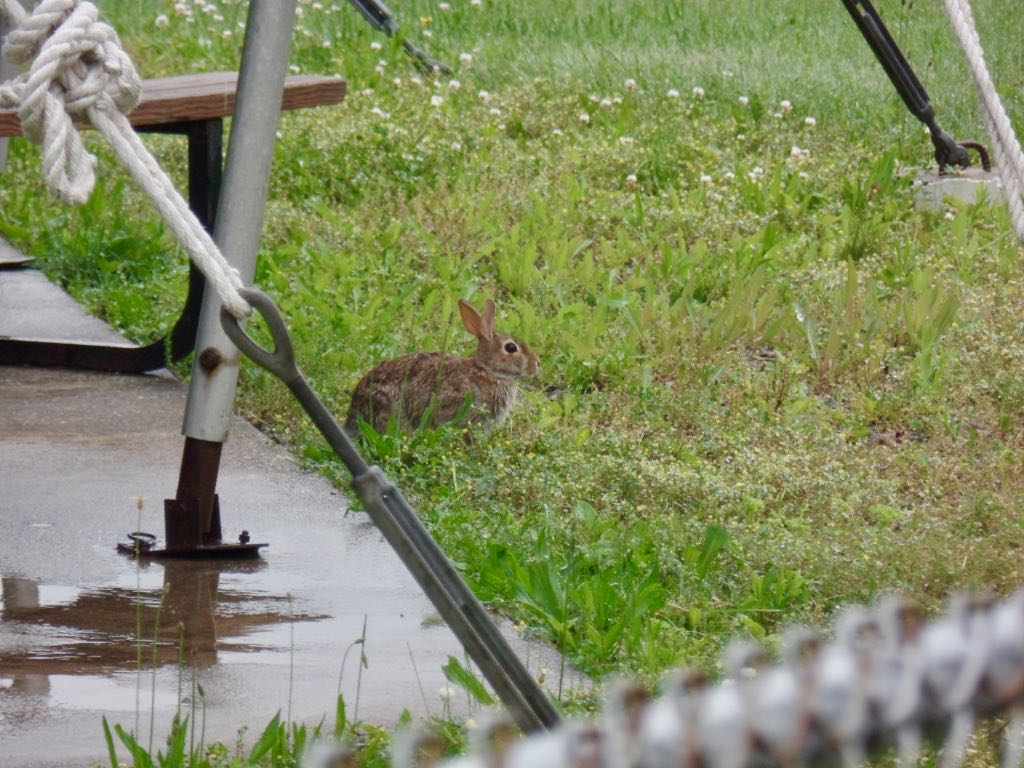 And ... hey! A cottontail enjoying the wet lawn, near the pavilions. 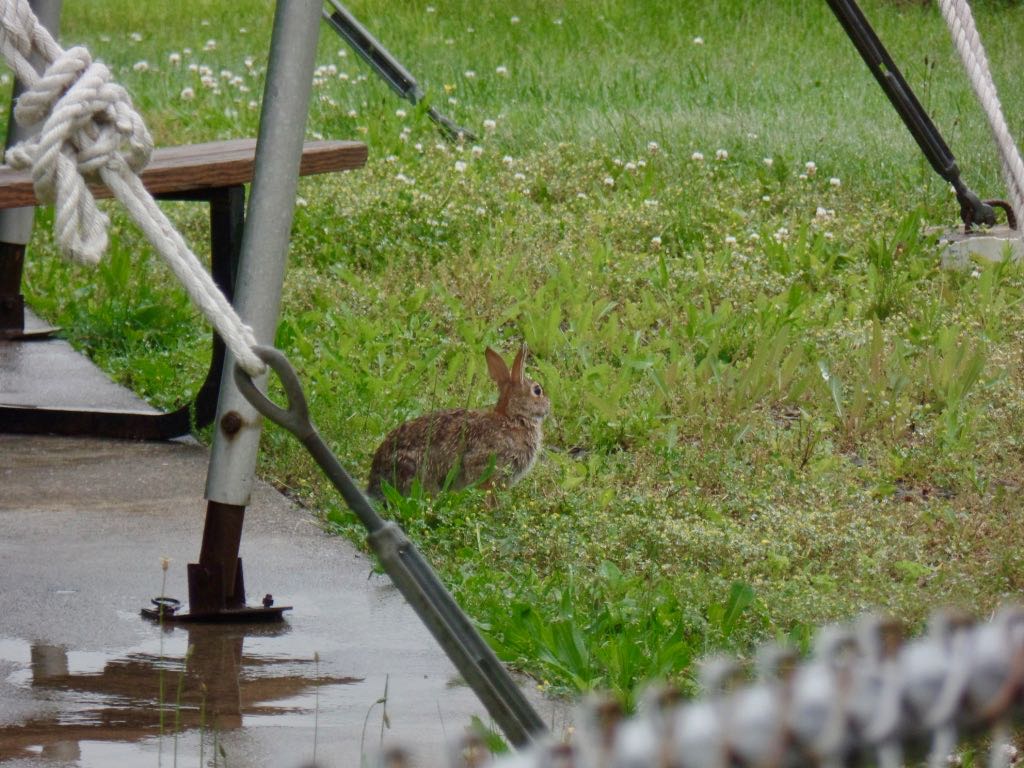 We watched the rabbit eating a fair while because we love this sort of park wildlife. 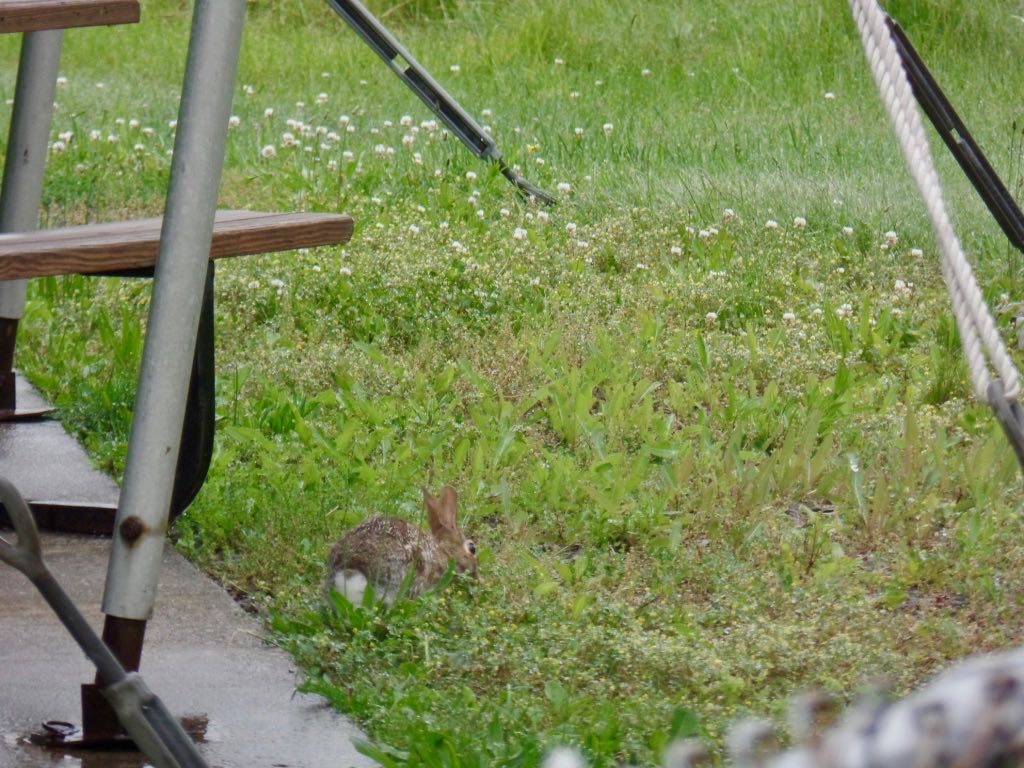 The rabbit nestles down for some more of the fresh grass. 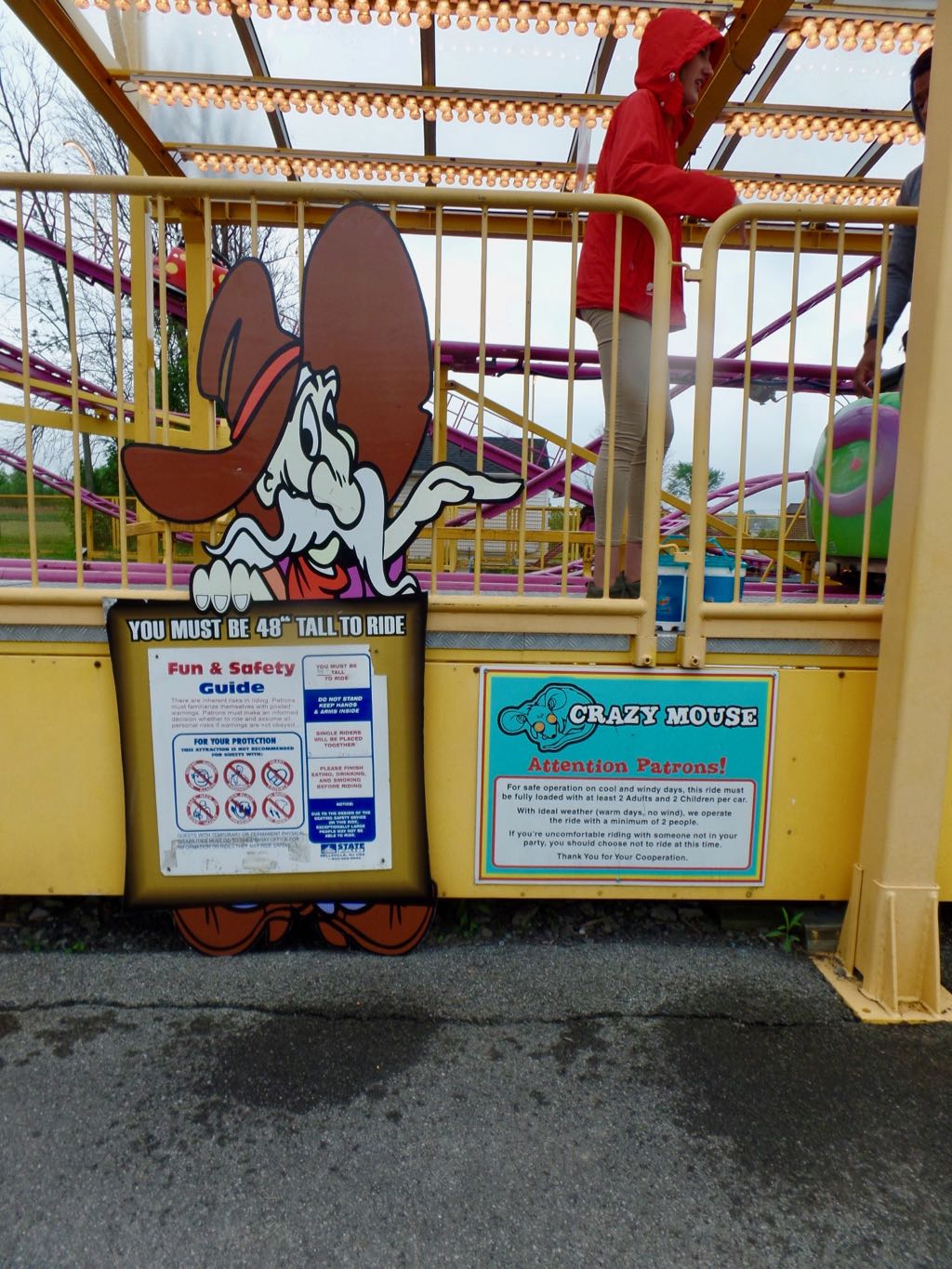 Ride safety sign for the Crazy Mouse roller coaster. Also a nice mouse icon there at the warning that they'll only send out two people in a car when the weather is ideal. They were not sending groups of four people that day even though it was cool and rainy and windy. 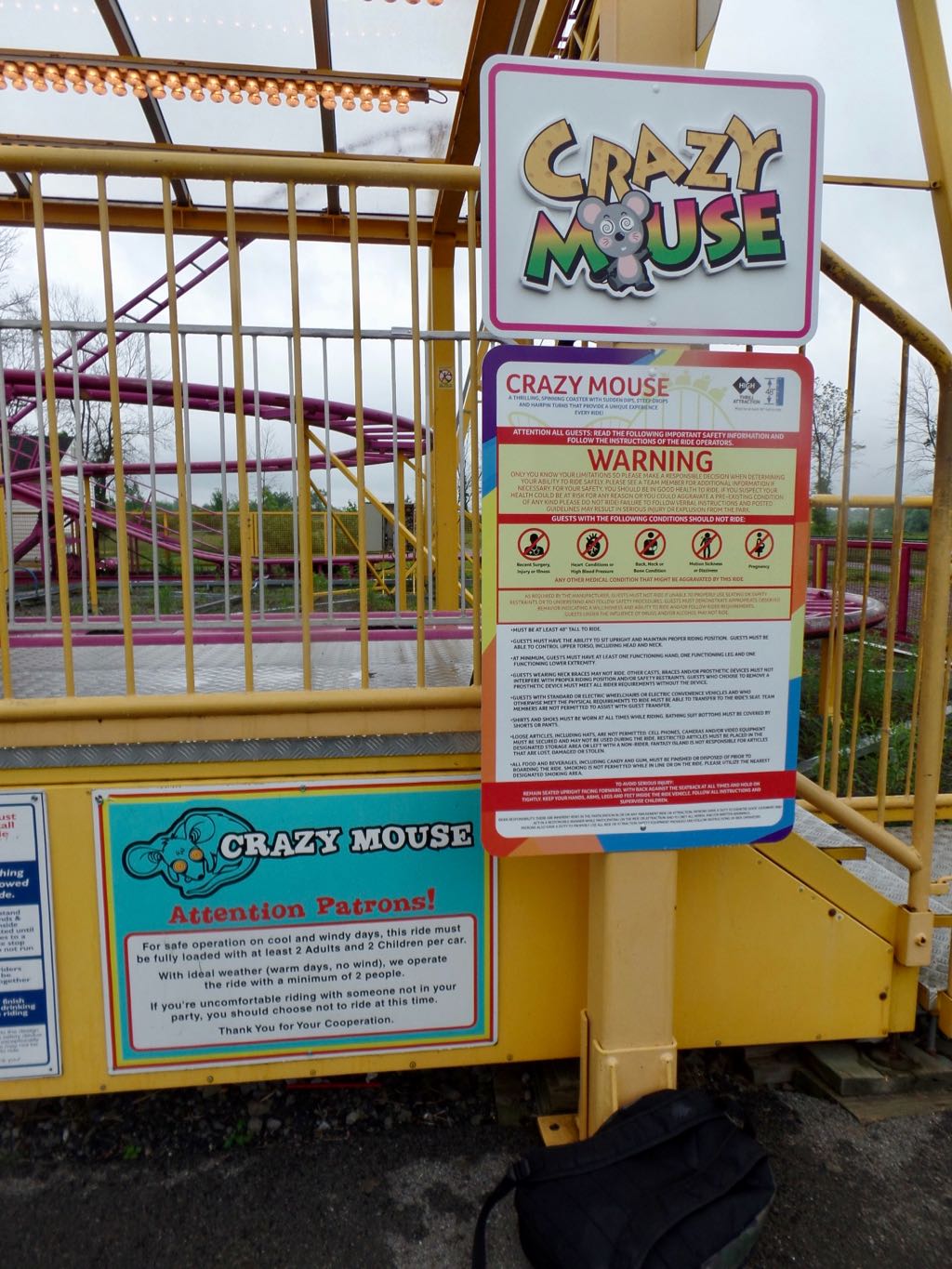 And between the signs here we get two versions of the Crazy Mouse logo. Pick your favorite. 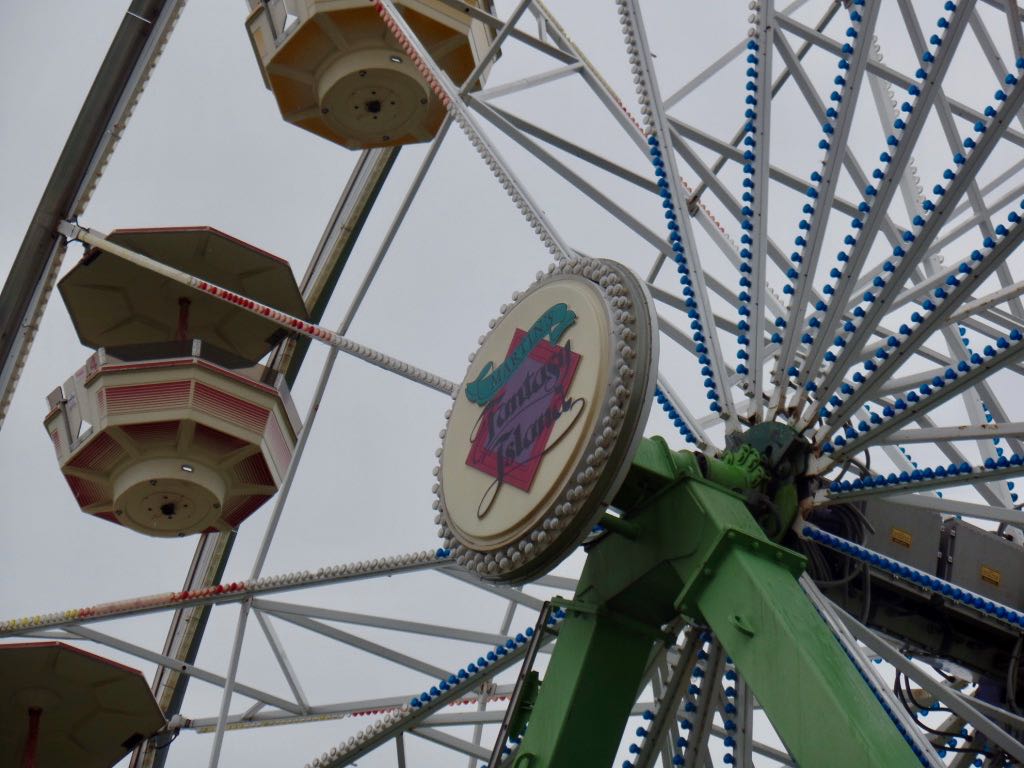 Close-up on the logo at the center of the Ferris wheel, which still shows the old Martin's Fantasy Island name and logo. Martin [ DiPietro ] sold the park to Apex in 2016. 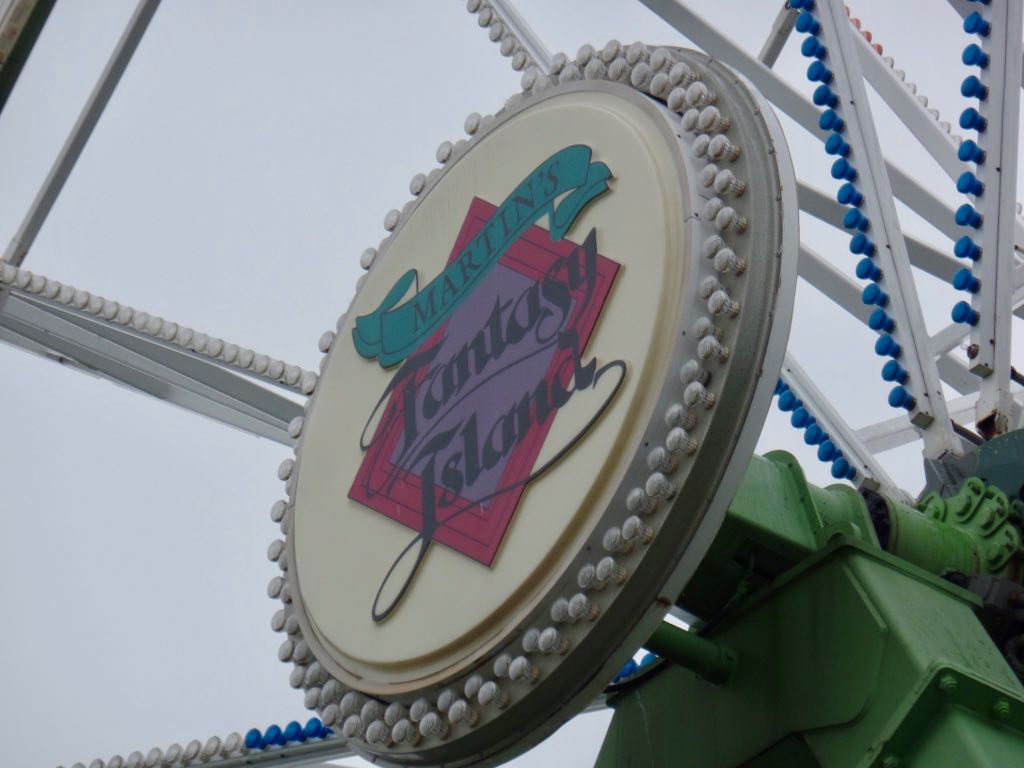 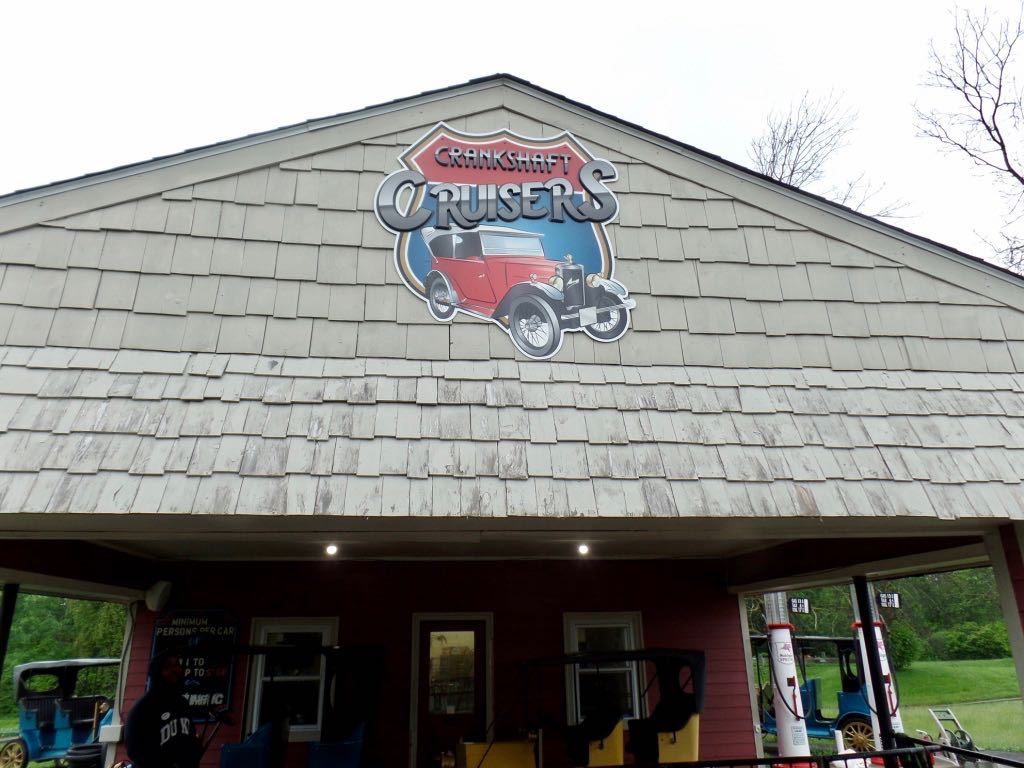 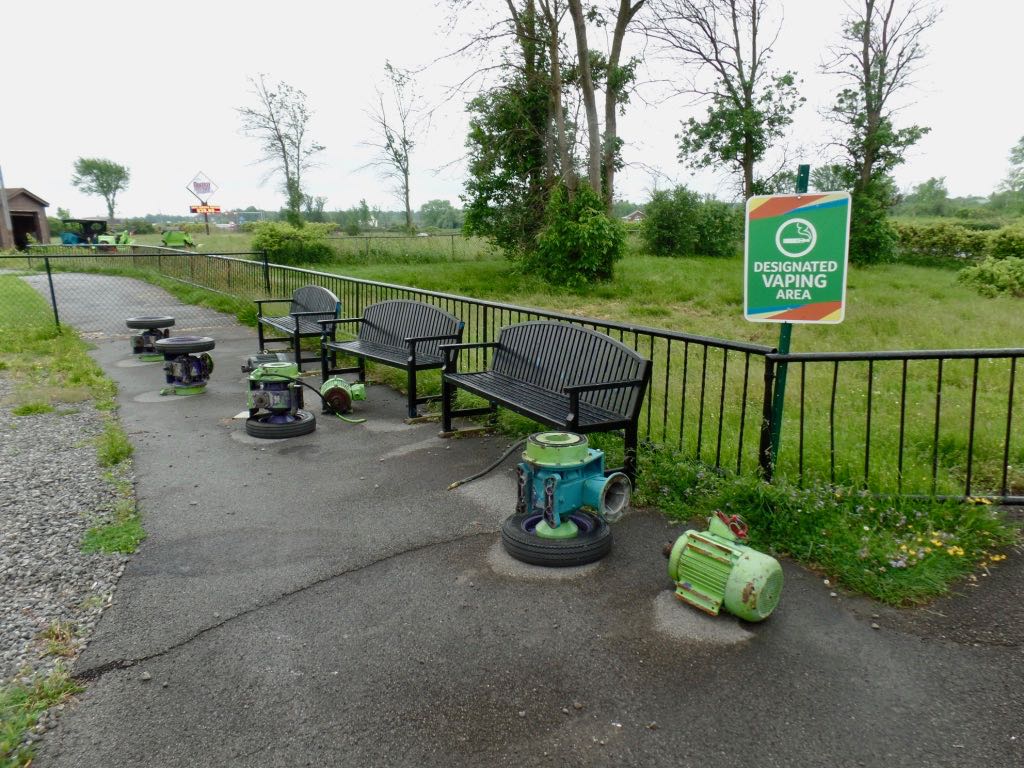 While Fantasy Island had many things which had been around since 1961 --- including the Crankshaft Cruisers --- they were keeping up with the times, too. The vaping area was separate from the smoking area, too, I guess so fights don't break out. 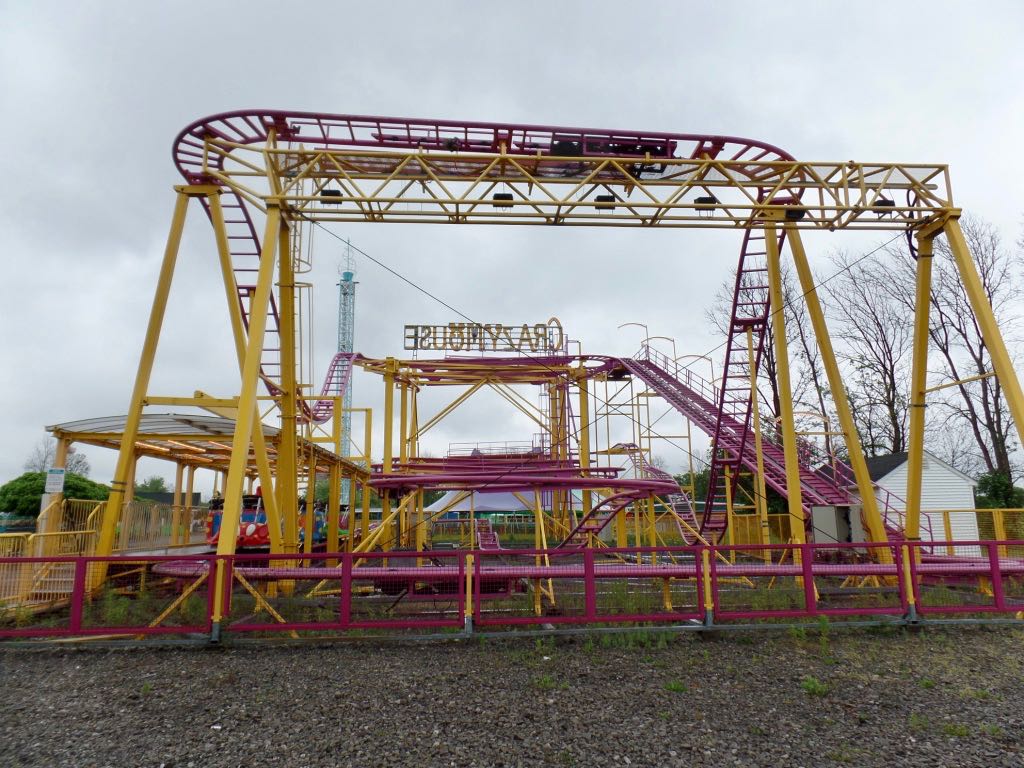 Prowling around the vaping area allowed me to get

bunny_hugger to roll her eyes and also to get this view of the roller coaster that you just don't ordinarily have the access for. 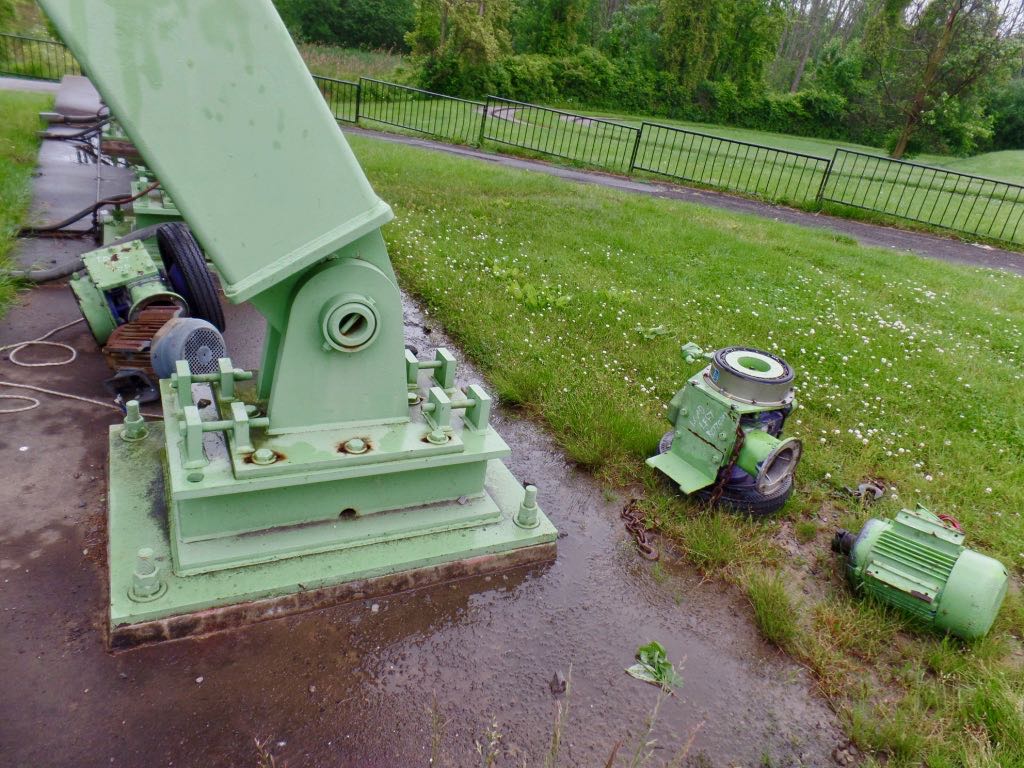 Support structure for the Ferris wheel plus some miscellaneous parts that I'm hoping they don't need and that are used for decoration or maybe found art. Trivia: In his first trip to England, in 1672, Gottfried Leibniz met several prominent mathematicians, but not Isaac Newton. Source: The Clockwork Universe: Isaac Newton, the Royal Society, and the Birth of the Modern World, Edward Dolnick.

PS: Using my A to Z Archives: Image, something else useful from functional analysis.