Wishing I could fly, fantasy island

Third, I walked to a used book store near the Michigan State campus and found a Robert Benchley book I'd never seen before. The owner agreed, he's never seen the title before that he remembers. So that's great.

Fourth and best of all: Michigan State is shutting down the plague factory. It's going to a virtual campus, not two weeks before they were going to open and be a fresh round of Covid-19 cases. Thank goodness. Have not yet heard of University of Michigan doing the same. But hopefully they, and the other state schools (Eastern Michigan, Western Michigan, Central, North, and of course ... Northwest) will do the same. I don't know how this will affect the planned reopening of the university library, for now set for the 24th, but we'll see. Wouldn't think they could do even a virtual semester without the library open at all, but they did shut down completely in March, which is why I've still got some books I took out in ... maybe February, when I thought maybe someday I might walk all the way to the university library ... hanging out here.

And now for my last bunch of pictures from Fantasy Island. Maybe it will emerge from its death again, maybe even get back some of the rides. It'll be a different place, though. Our day was cut short by rain, although I think by only a half-hour or so. I regret that we didn't buy stuff from the gift shop before we went back to the car for our rain jackets; it was a bad decision and was all mine. 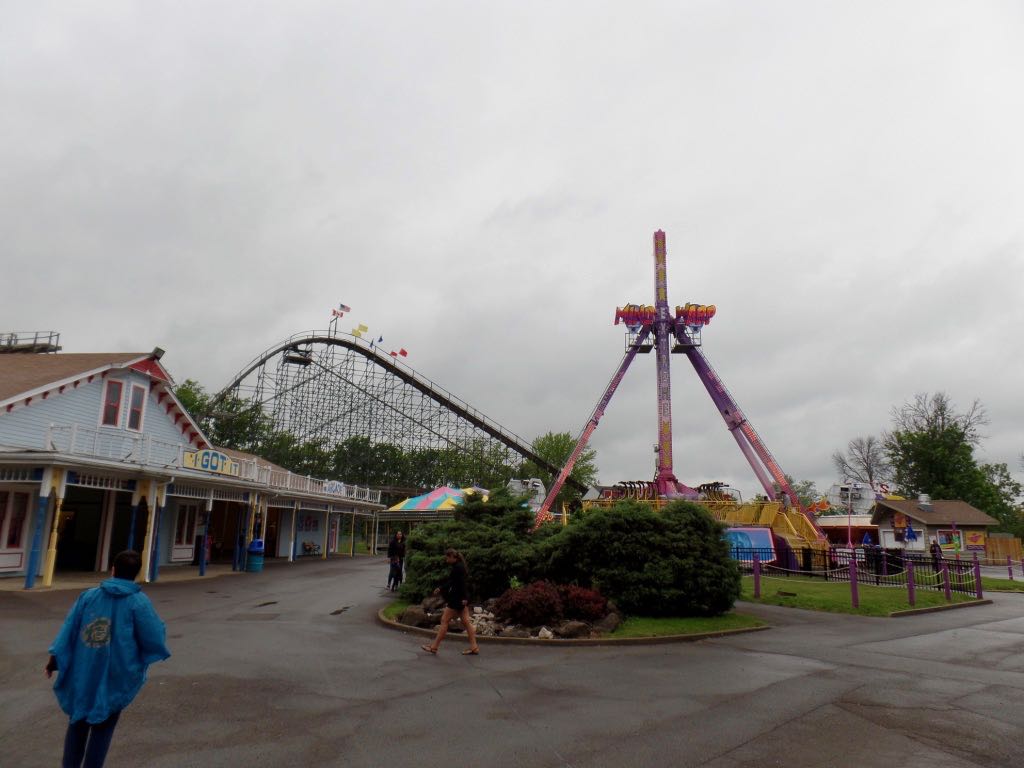 Getting back to the thrill-rides area of the park. That's 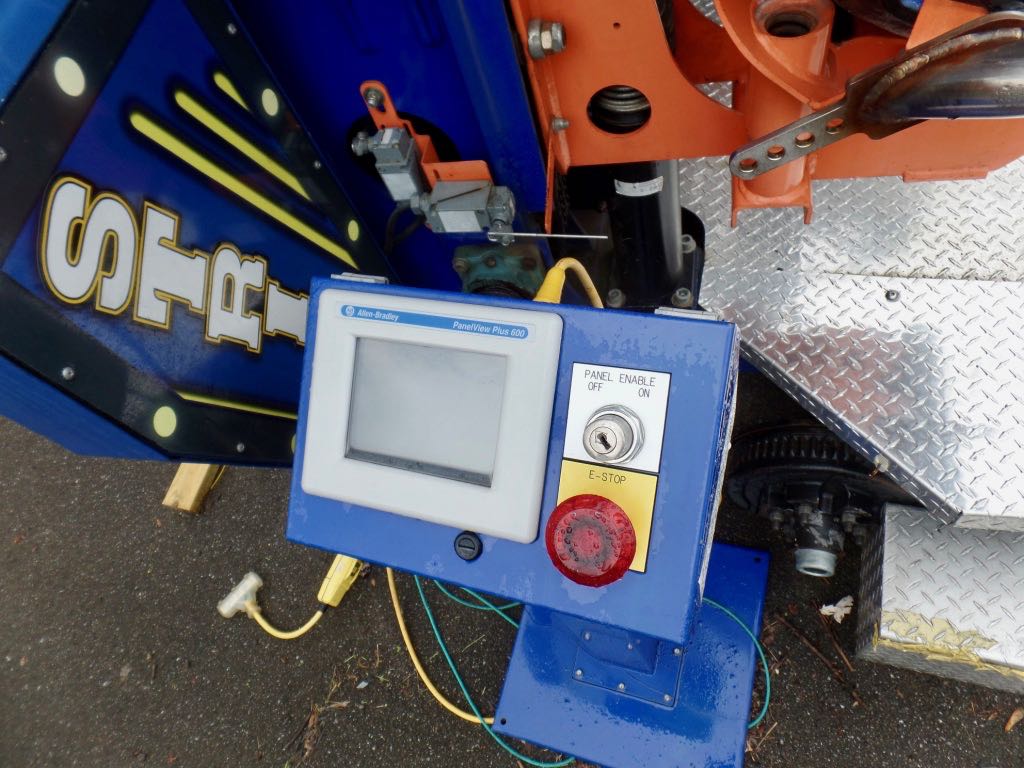 The control panel and emergency stop button for something or other that puts one person in one chair. It wasn't attended and didn't seem to be operating. 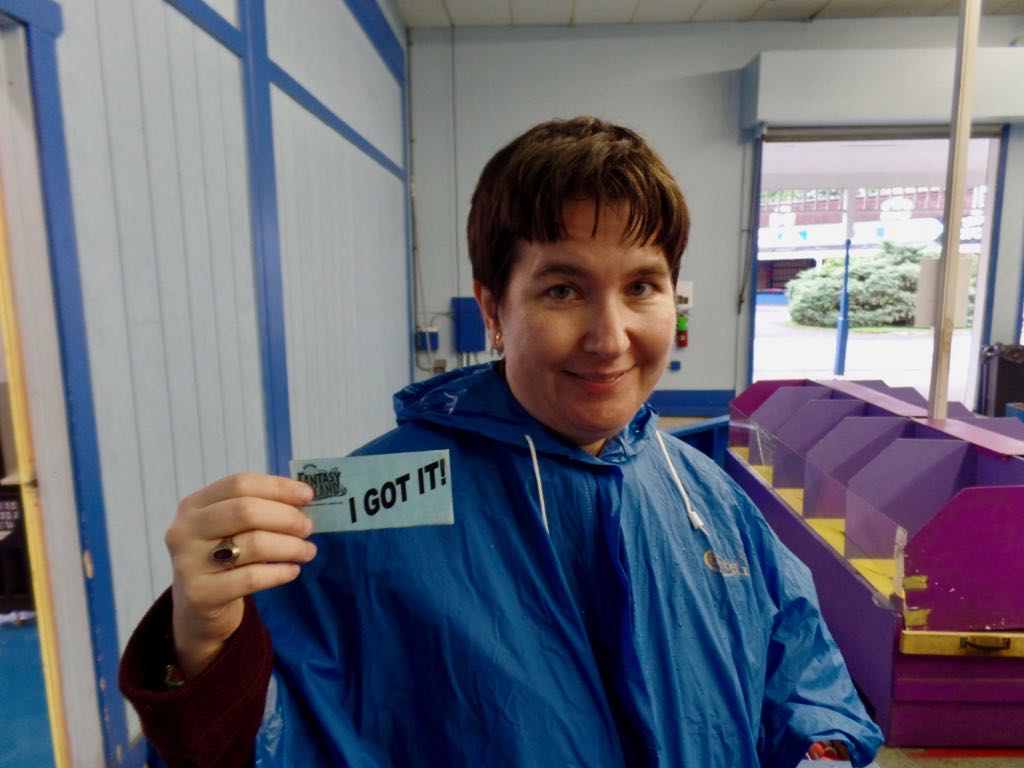 We played a little more I Got It and look what happened!

bunny_hugger found no redemption prizes worth anything for a single I Got It ticket, and we kept the ticket in the hopes that we'd visit the park again and maybe win some more. So now that's a good souvenir too. 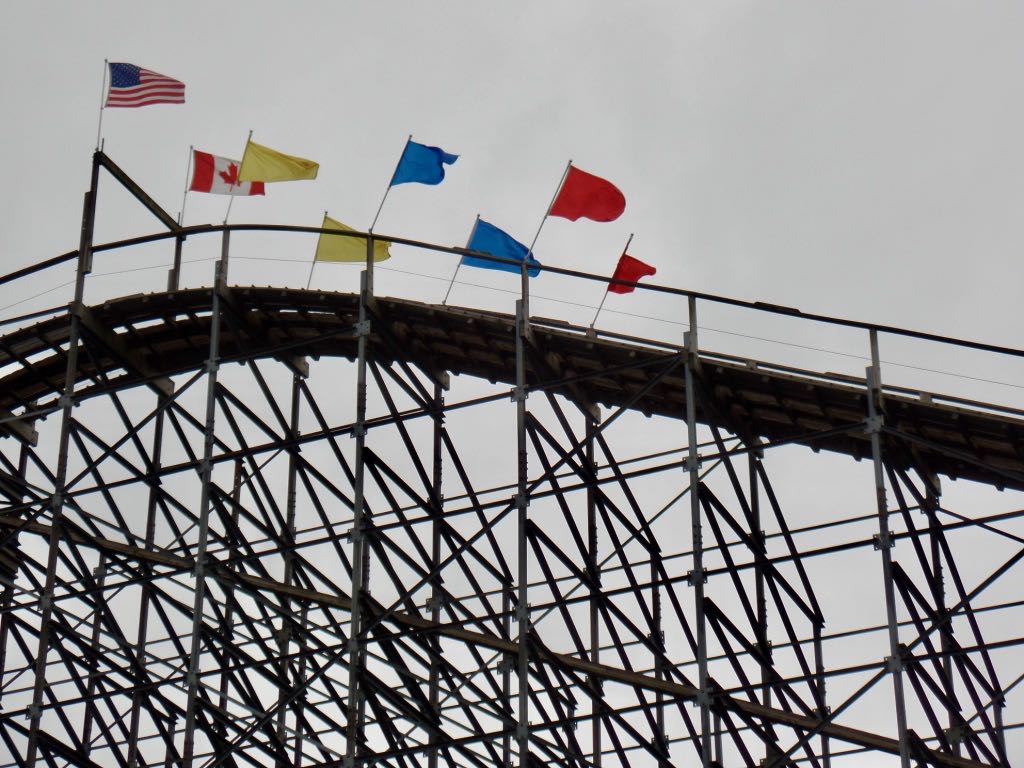 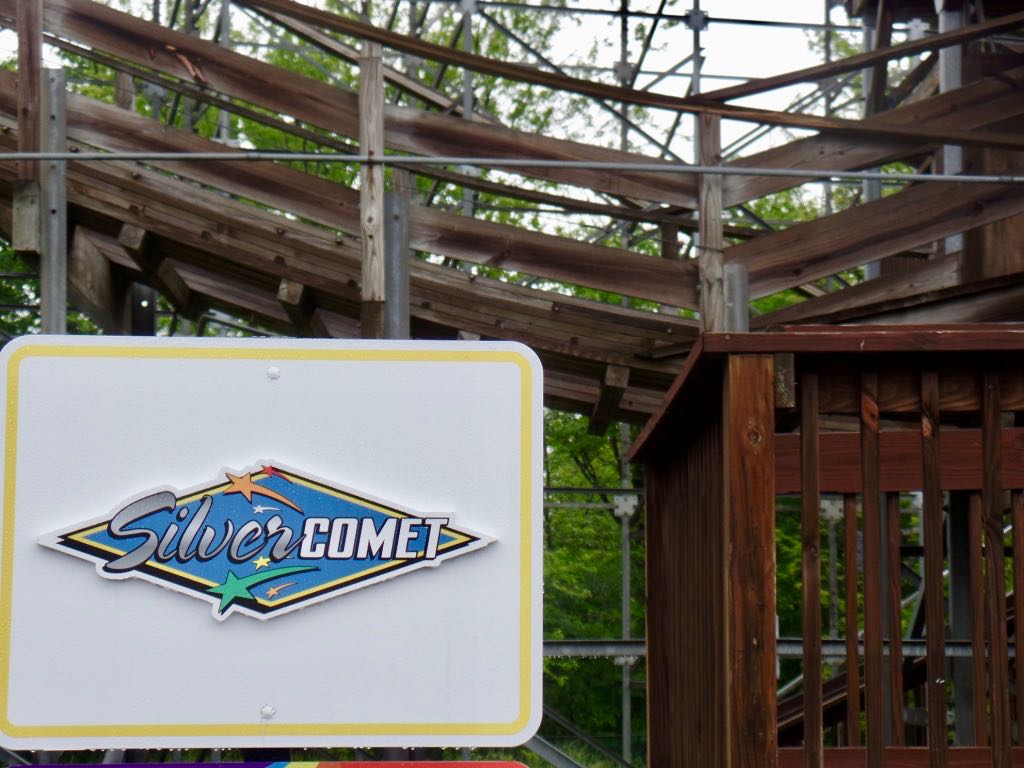 And a look at the Silver Comet's ride sign. 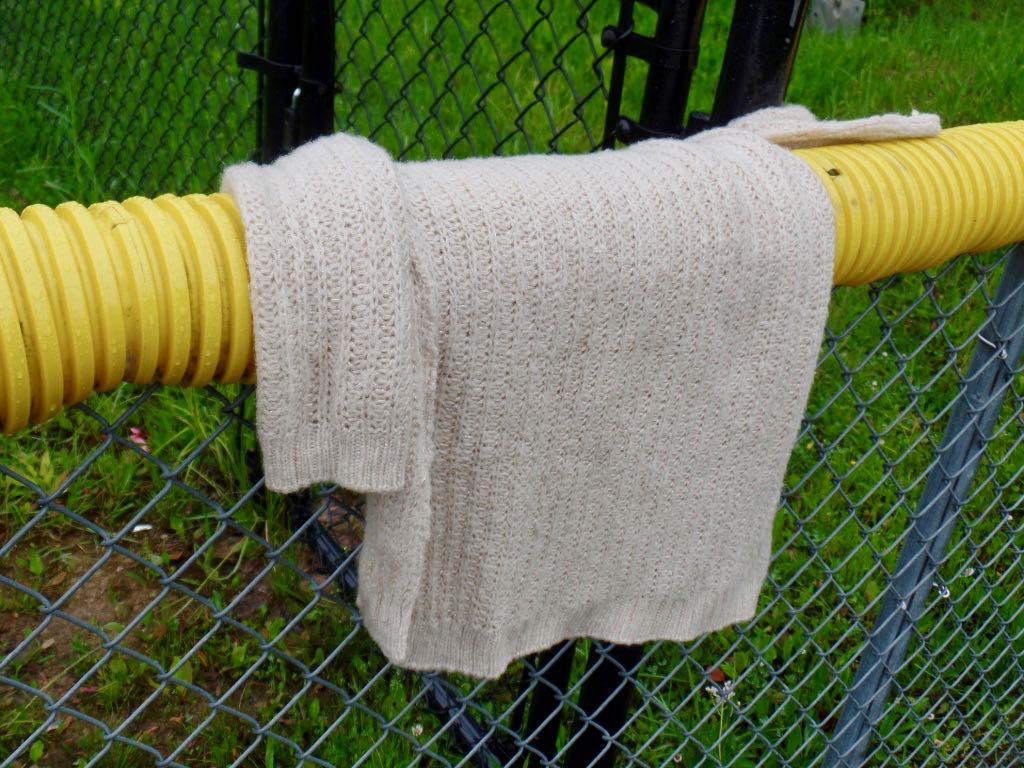 We found a sweater on the ground at the Silver Comet queue, and this gave us the eternal question about what to do. Like, it's obviously bad to just leave it in the puddle, but should we take it away from where whoever lost it? Would they know where the Lost-and-Found even is? So we put it on the fence here, where hopefully it wouldn't get any more damaged, but still be really easy for people to spot. 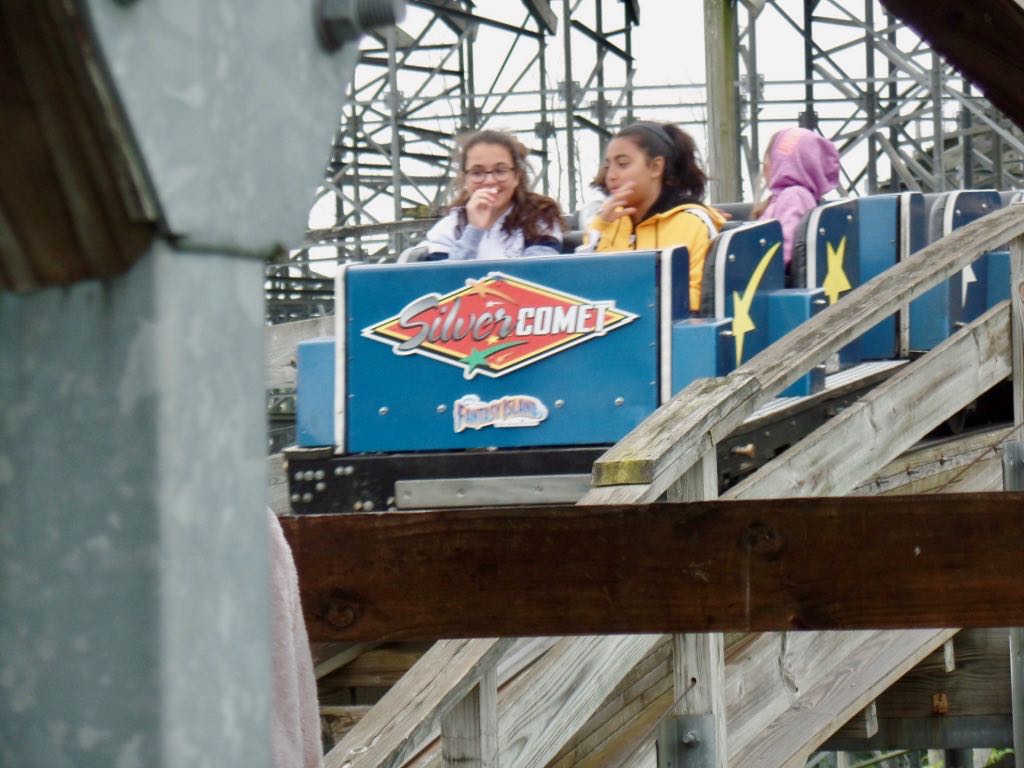 Silver Comet returning to the station. 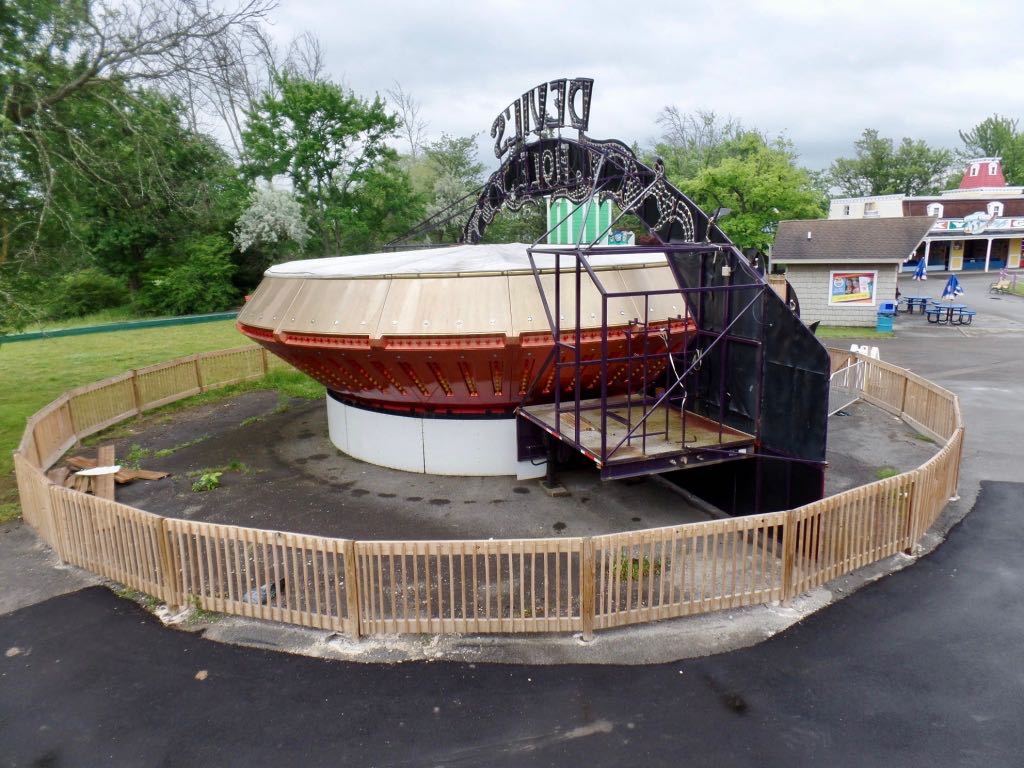 Looking from the Silver Comet exit queue down at the Devil's Hole. The original Devil's Hole was a Rotor but that kind of ride is almost extinct. This is a Gravitron, which has a lot of the same appeal but isn't yet the same. 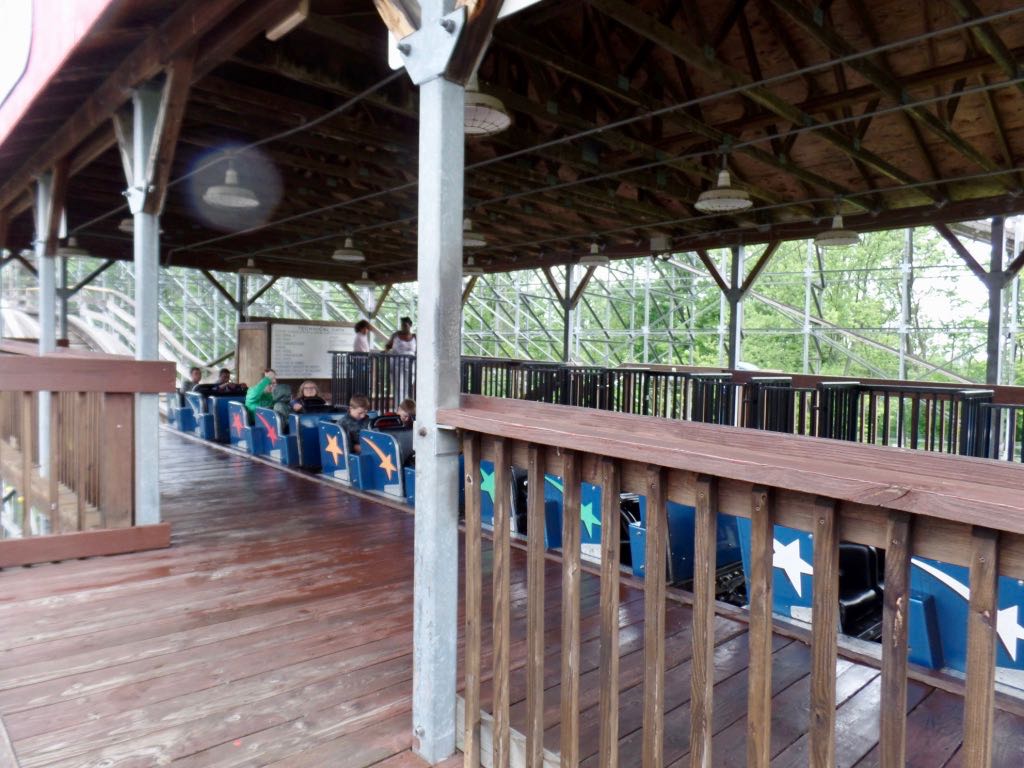 Another look at the Silver Comet, from the unloading side. 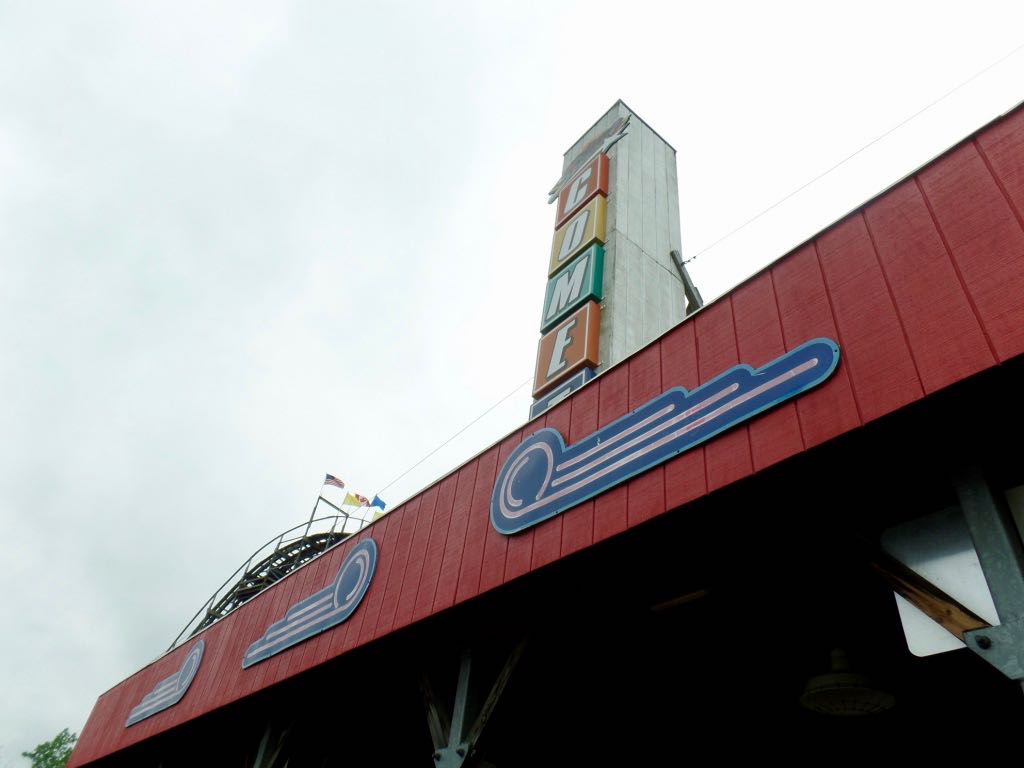 And looking up high at the Silver Comet station's sign. 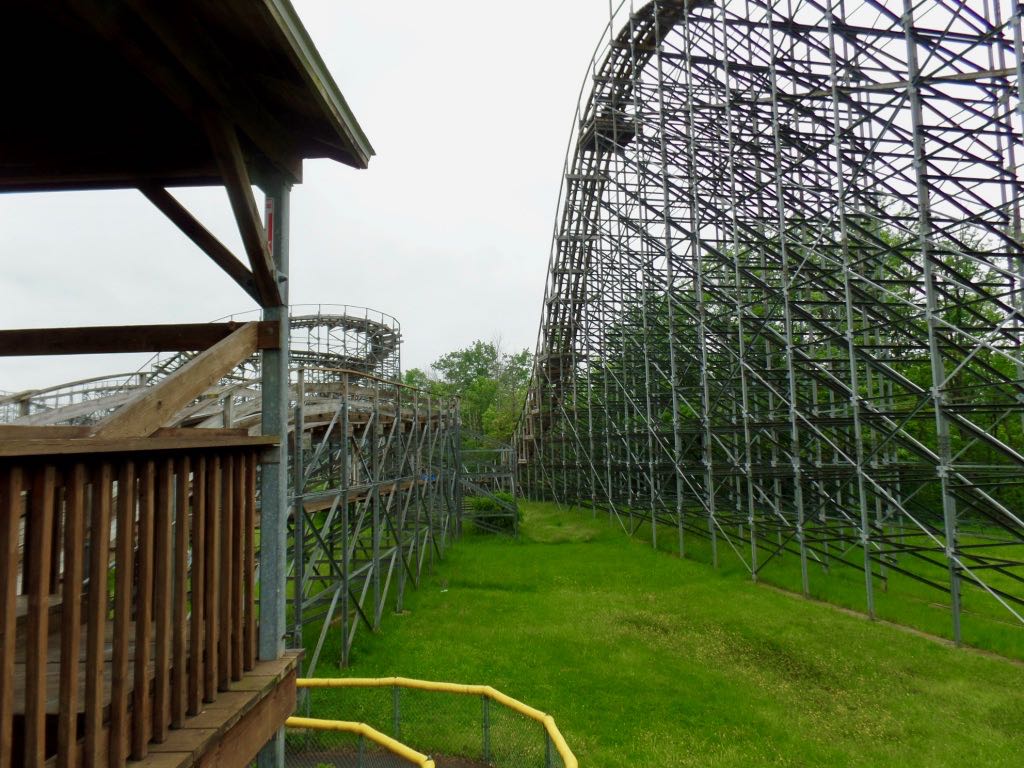 We got another ride in. Here's the gap between return leg and lift hill. I believe there was another rabbit eating the wet grass here, but that it was far too far away to make out. 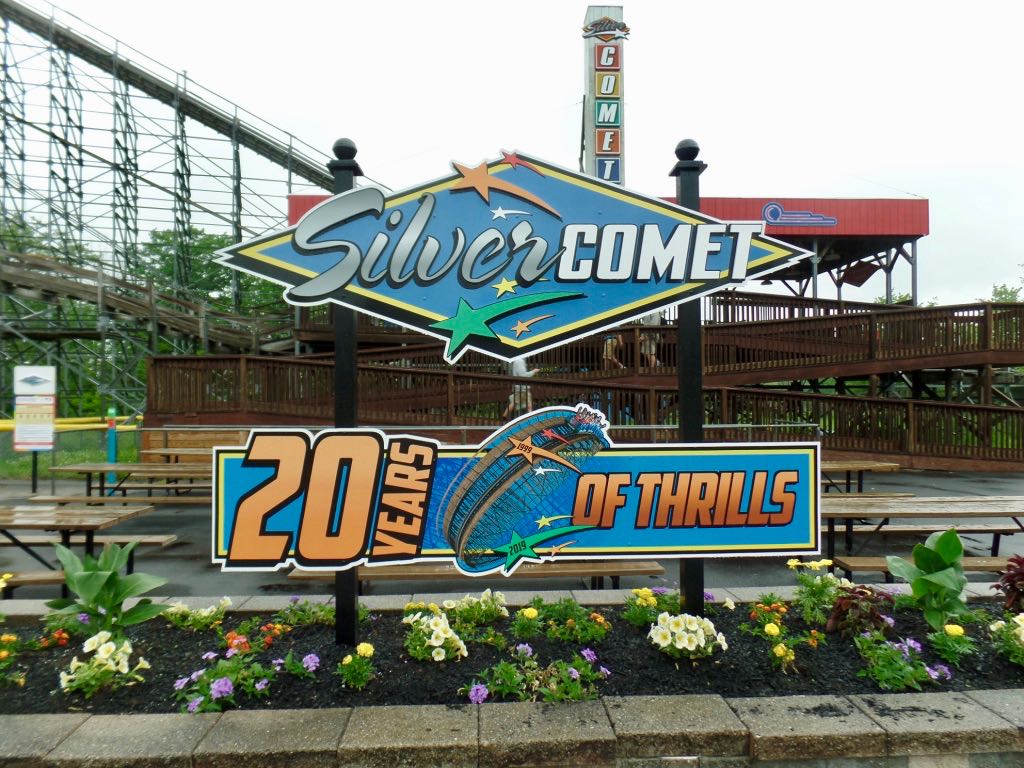 Silver Comet's station and the sign put up to celebrate its 2019 anniversary year. 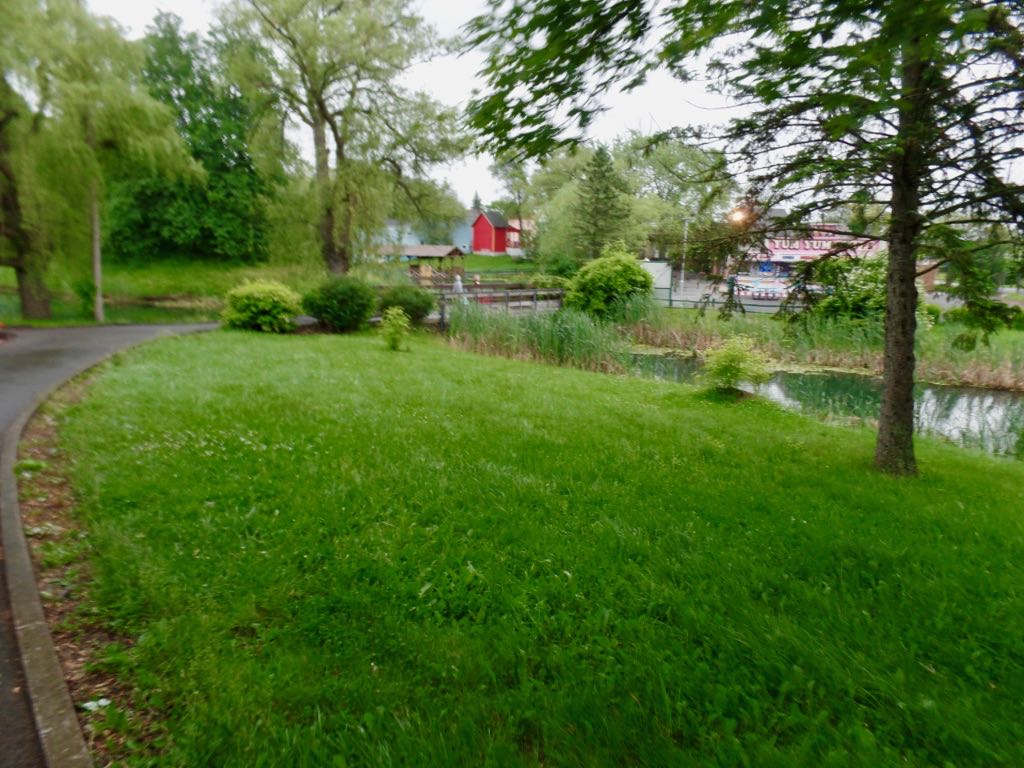 The park would close early, because of the rain. Here's a photograph from near the funnel cake stand where we spent way too much time trying to get a funnel cake back towards the Wild West Town; we could hear the 5:00 show going on, in the far distance. 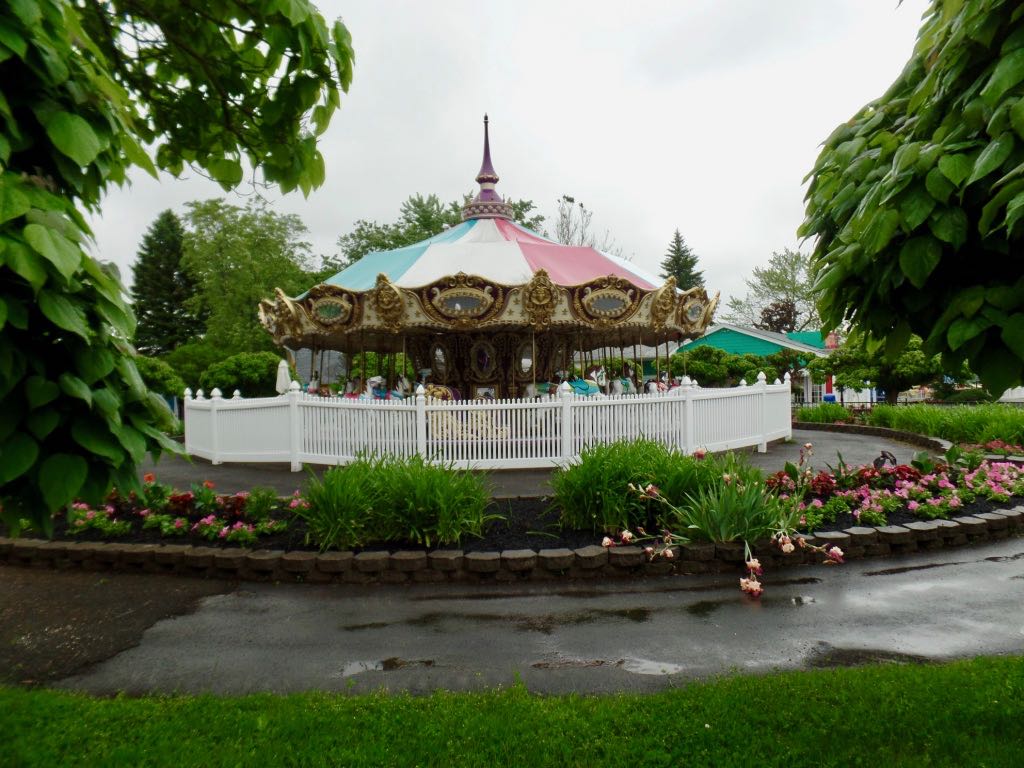 A last look at the Carousel. 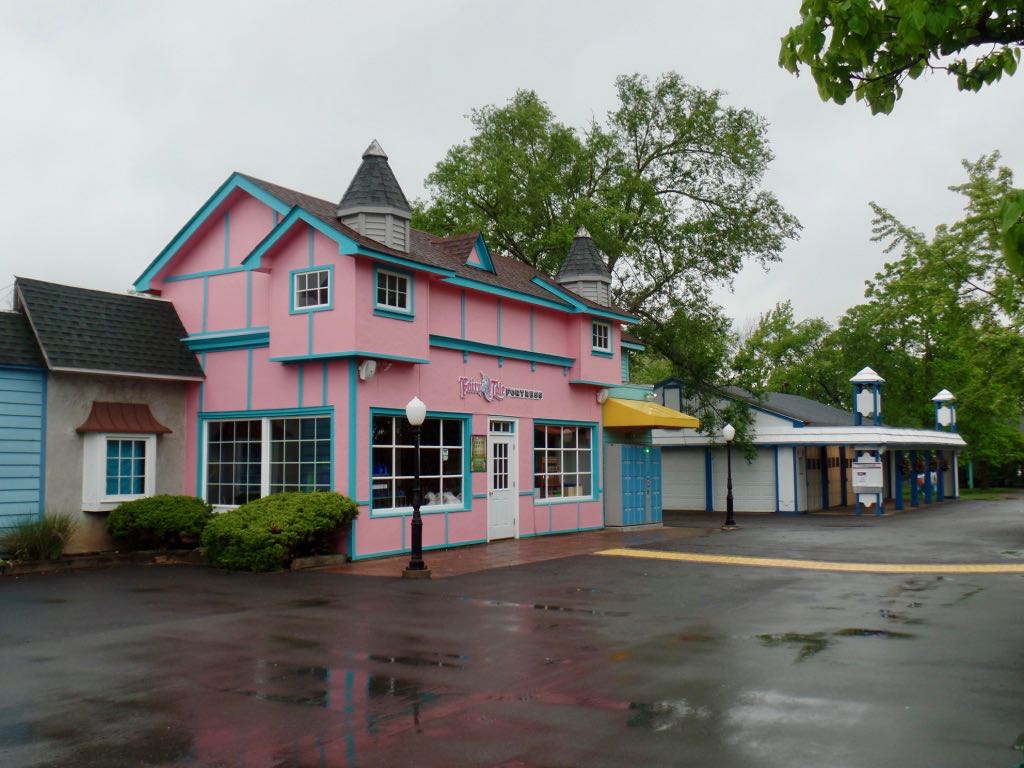 And a farewell look to the Fairy Tale Fortress and the Yellow Brick Road and, well, Fantasy Island. Here's hoping you can come back from oblivion.

Trivia: In June 1849 the Russian czar sent 100,000 troops into Hungary and 30,000 into Transylvania, to suppress the rebellions that the Austro-Hungarian government had been unable to quell, following an appeal they requested from the Austrian government. Source: 1848: The Revolutionary Tide in Europe, Peter N Stearns.