Come with me and I'll show you Seabreeze

My All 2020 Mathematics A to Z: Jacobi Polynomials published today! I've been wanting these to post earlier in the week --- it's bad work loading to have both my big things publish on Thursdays --- and for the first time I've managed it! Here's hoping I can get K published on Wednesday or even, dare I dream, a Tuesday.

And now something special: the 16th of June, 2019, when we visited Seabreeze Amusement Park in Rochester. Which was one year to the day, it turns out, after we had been to Lakeside Park in Denver. Which is especially heartening to me because I was posting Lakeside Park pictures when this calendar year started. So I have managed to cover twelve months' photographs in eight months of calendar time. Aided, yes, by not having anything to do most days so I can just throw a dozen or even more pictures up each day. But still. Another eight months and I'll be caught up to the present day! 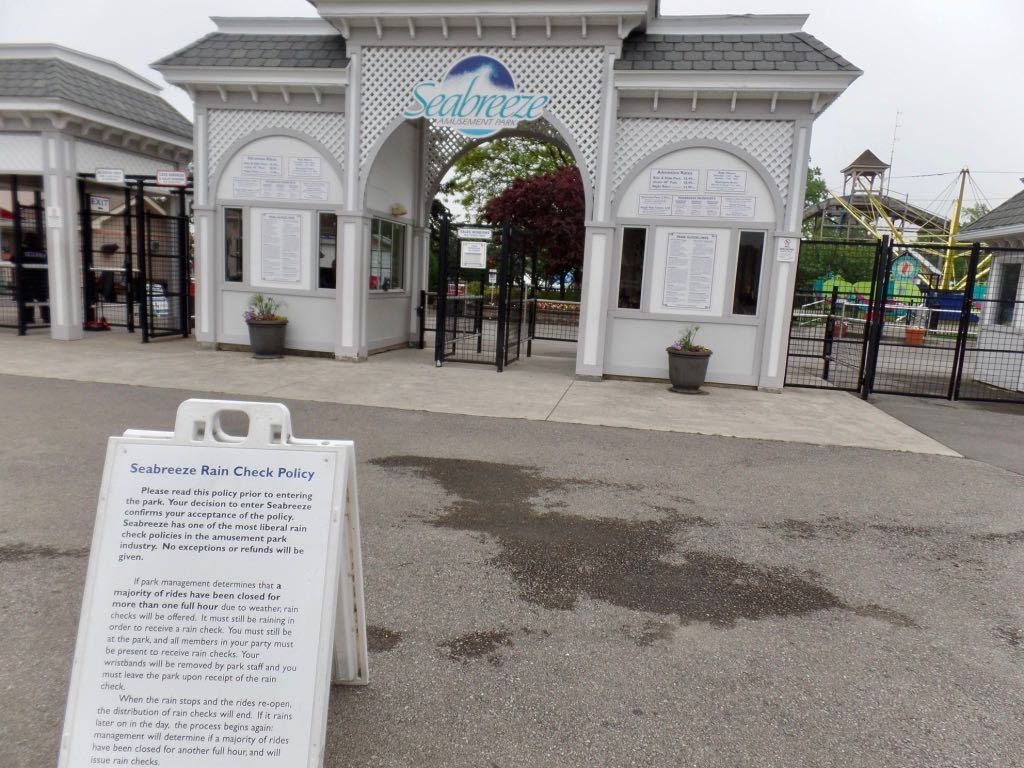 Seabreeze's entrance gate; they only became a gated park in the late 70s, when many of the older parks finally did. And, hey, the rain check policy too. 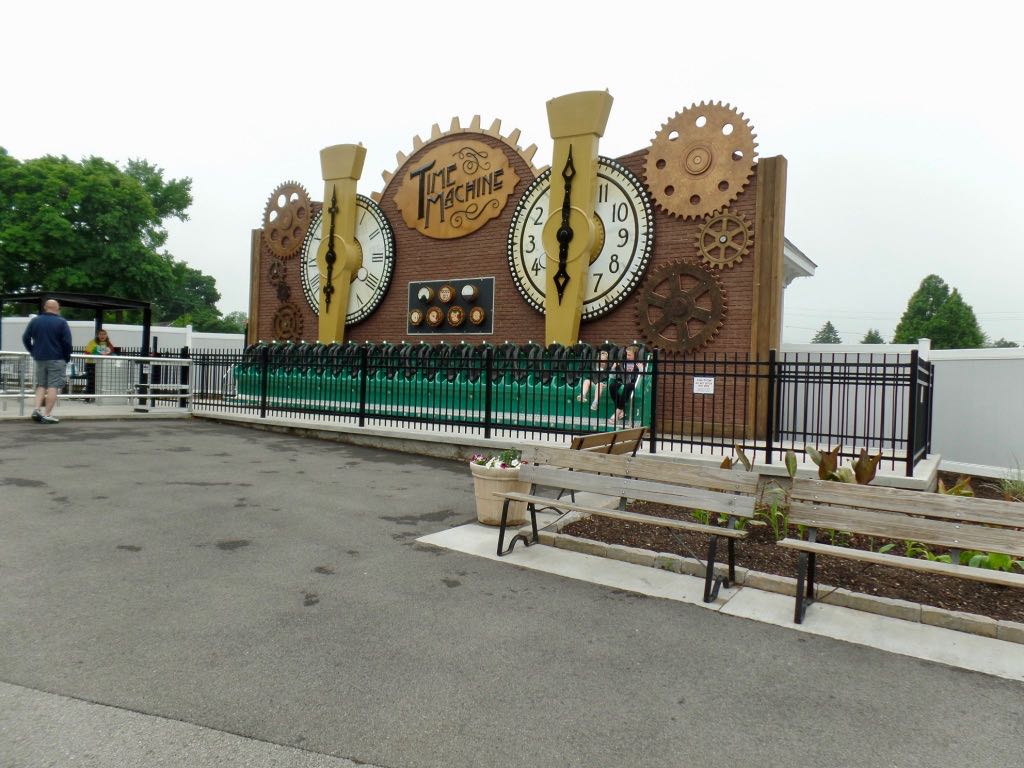 One of the first rides on the inside was this Time Machine, a Miami ride that swings you side to side in a circle. Fun ride and theme for it. 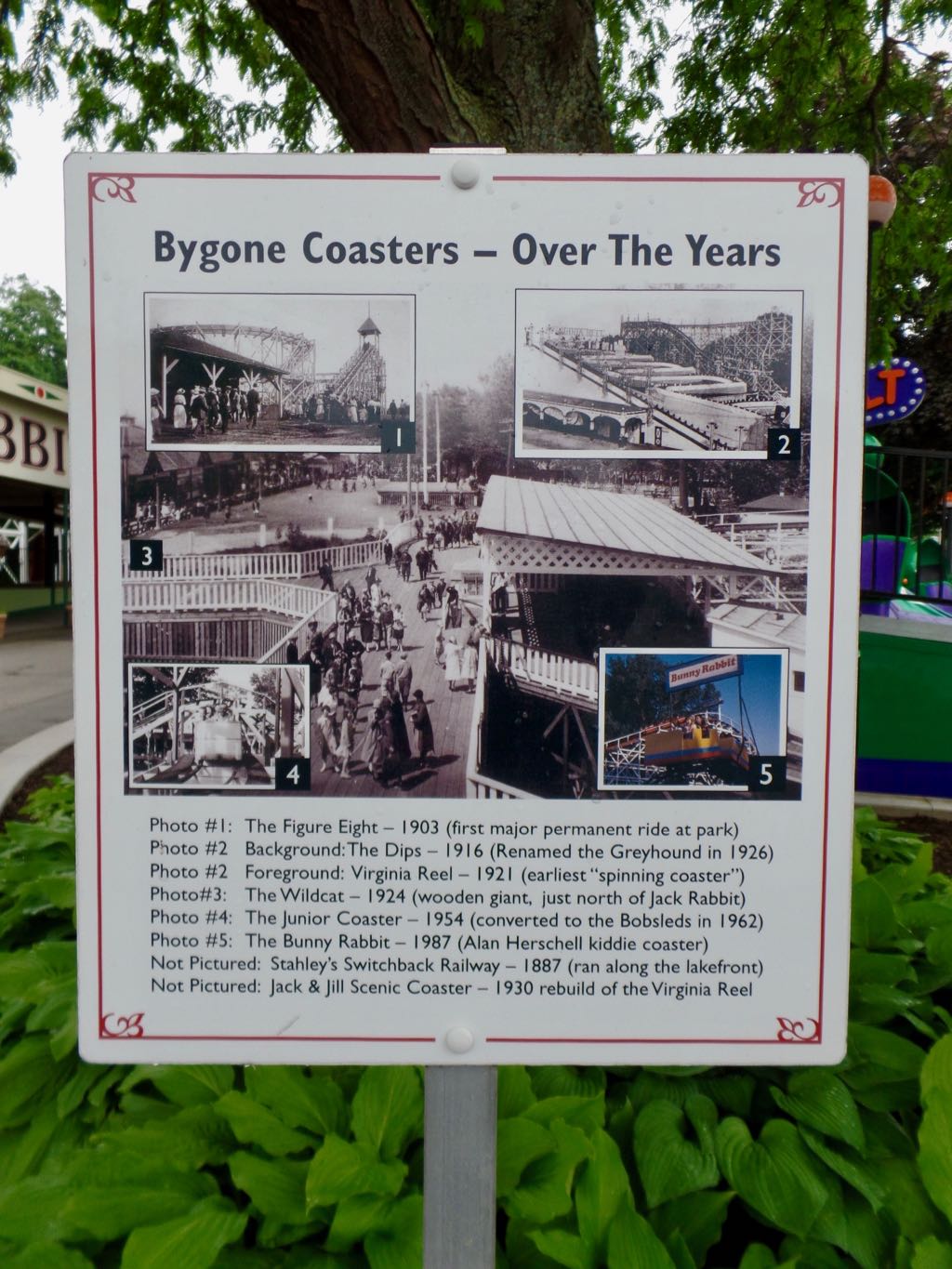 Any question about whether we would like Seabreeze was answered with this, the discovery of a sign about the park's history. It's one of many. Here, one of roller coasters that used to be at the park. Note photograph 5, the former kids ride counterpart to the park's big signature ride Jack Rabbit: the Bunny Rabbit. This is such a brilliant name that it's a pity they didn't use that for the modern kiddie coaster. 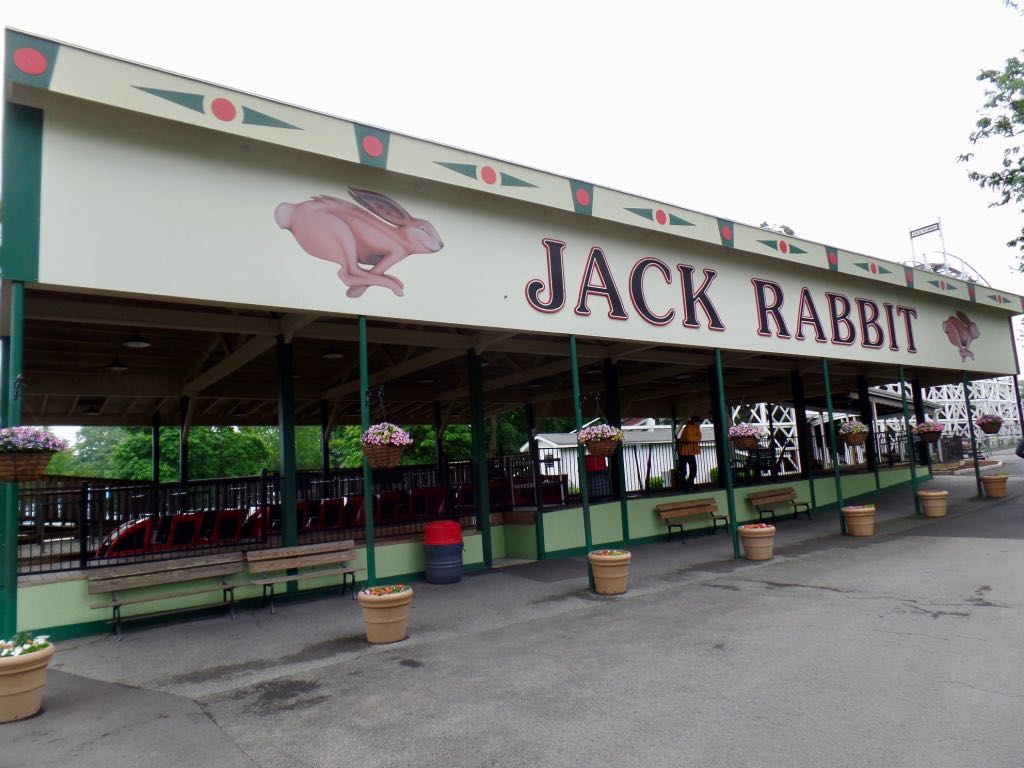 And here's what we came for: Jack Rabbit, which opened in 1920 ... we were there just short of its centennial year and were thinking already of whether we could come back for 2020. No, we could not. 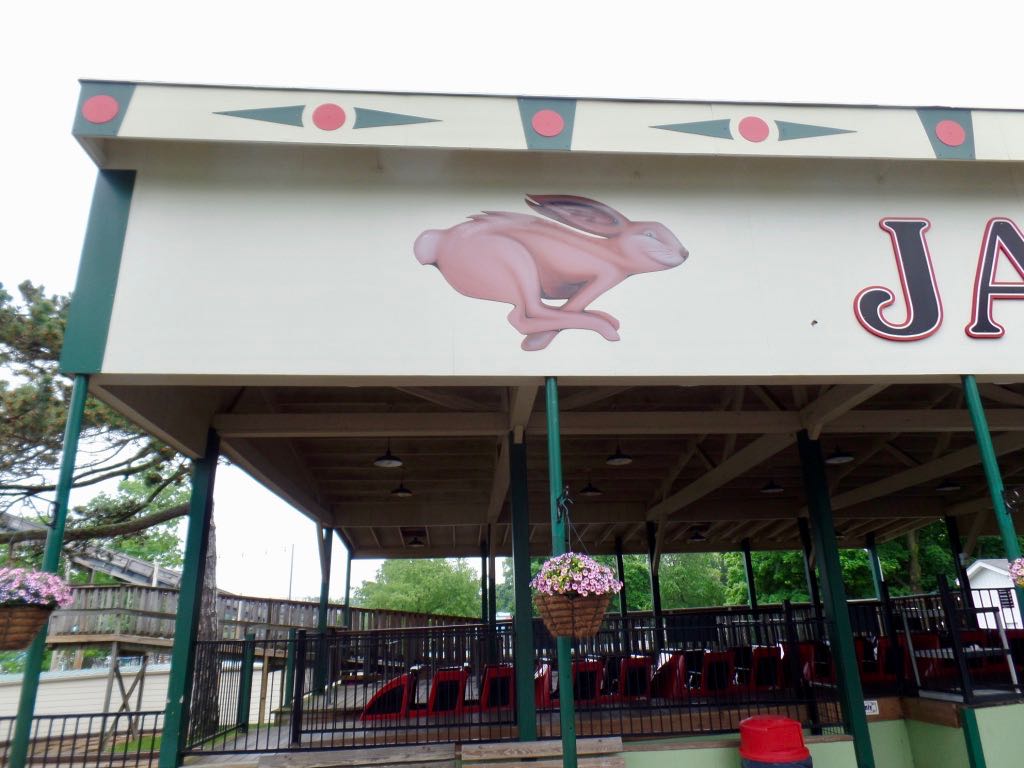 A look at the bright pink-red rabbit mascot for the station. I don't know how far back it goes but the style looks old-fashioned. The train was sitting at the station, apparently not running, so we feared it wasn't running yet. Someone else got on first, though, so we maybe missed the first ride of the day. 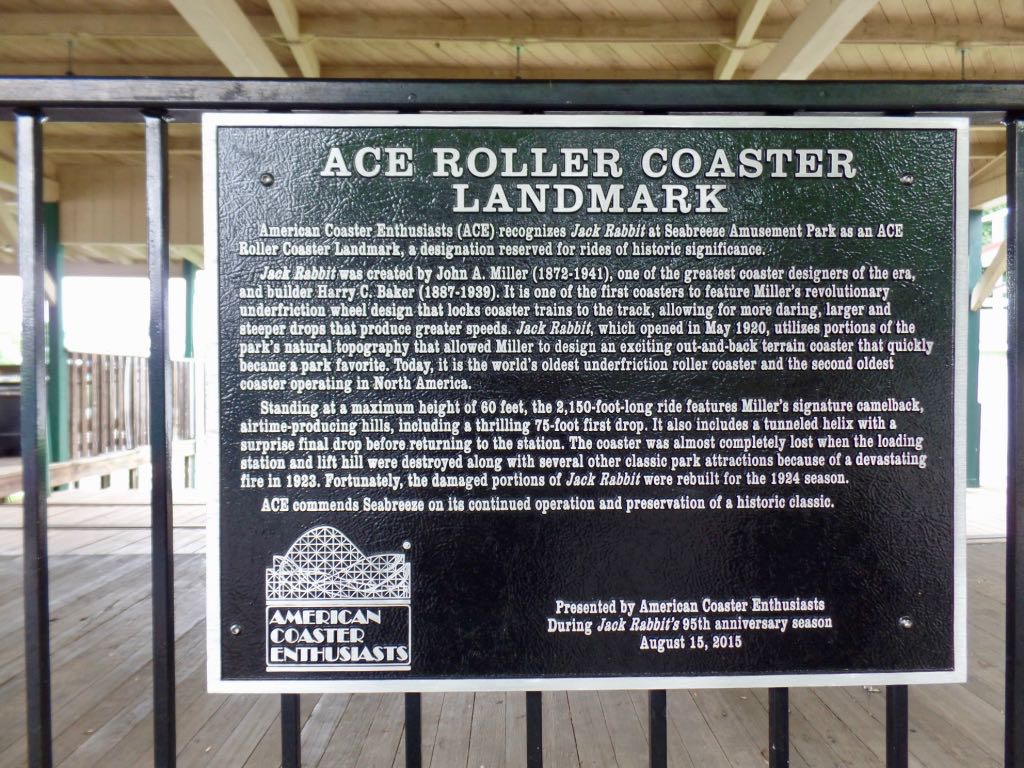 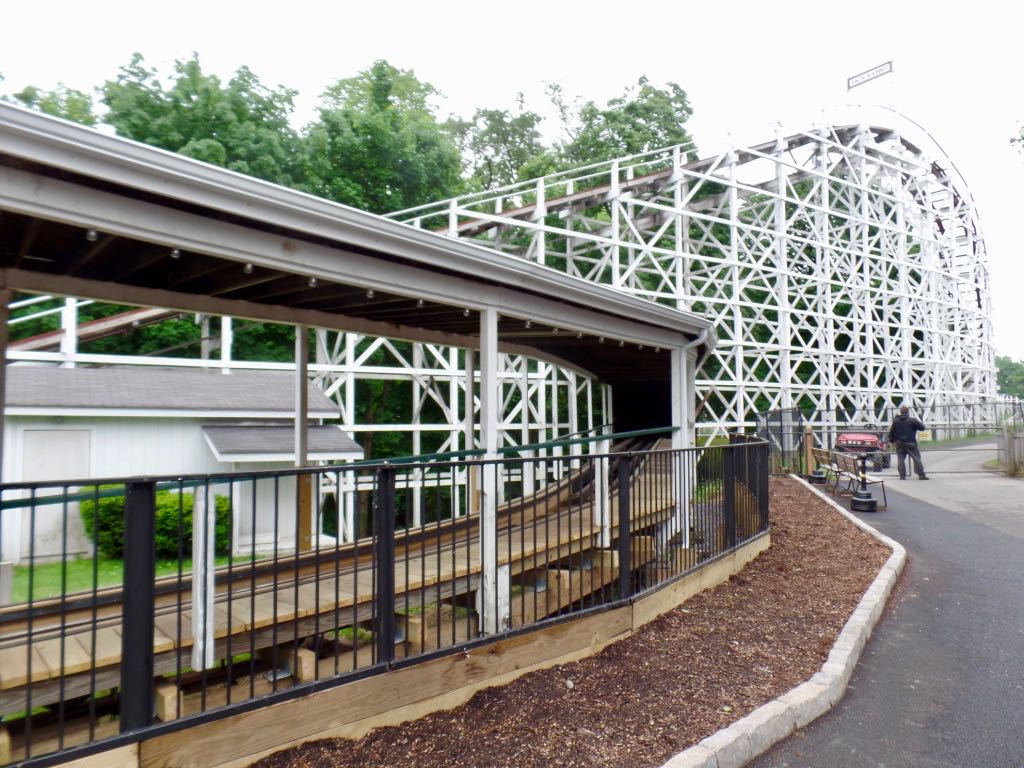 A look over Jack Rabbit's return leg and behind it the lift hill, with a sign for the ride's name at the very top. 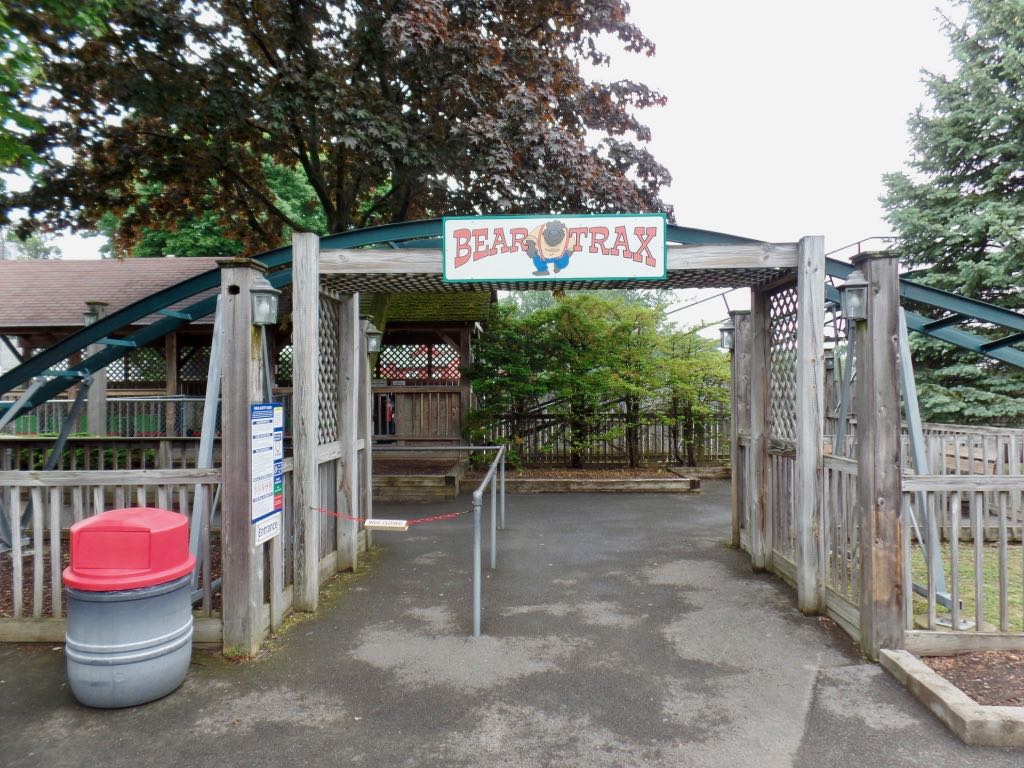 Across from Jack Rabbit's entrance is Bear Trax, their current kiddie coaster. It's a fine name but can't compare, in context, to Bunny Rabbit. 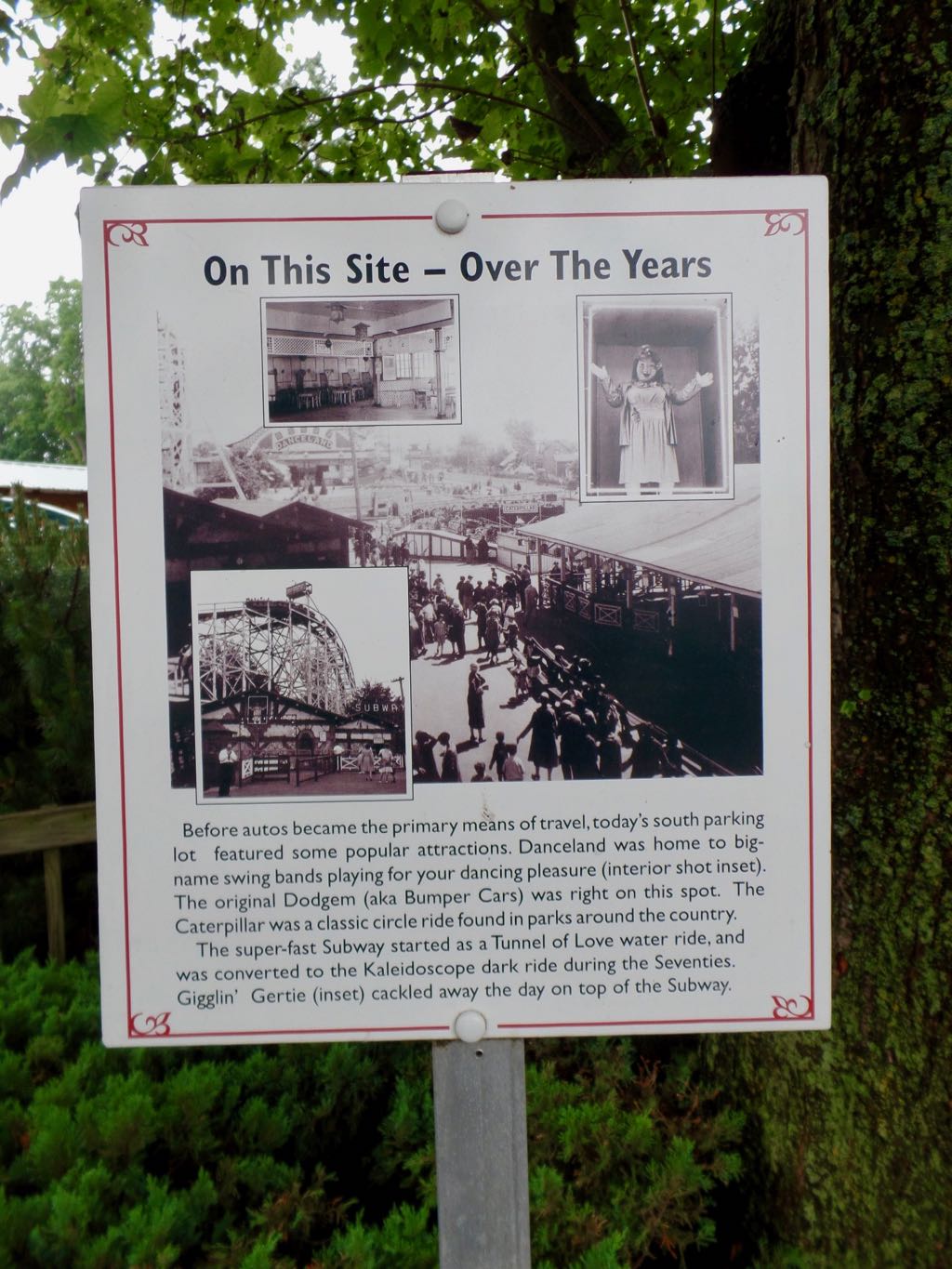 Another historical marker on the north side of the park, near Jack Rabbit. It shows off Danceland, the original bumper cars and Caterpillar ride, and their own Laughing Sal, a Gigglin' Gertie. Also a sign about what had once been a Tunnel of Love ride; those are all but extinct. 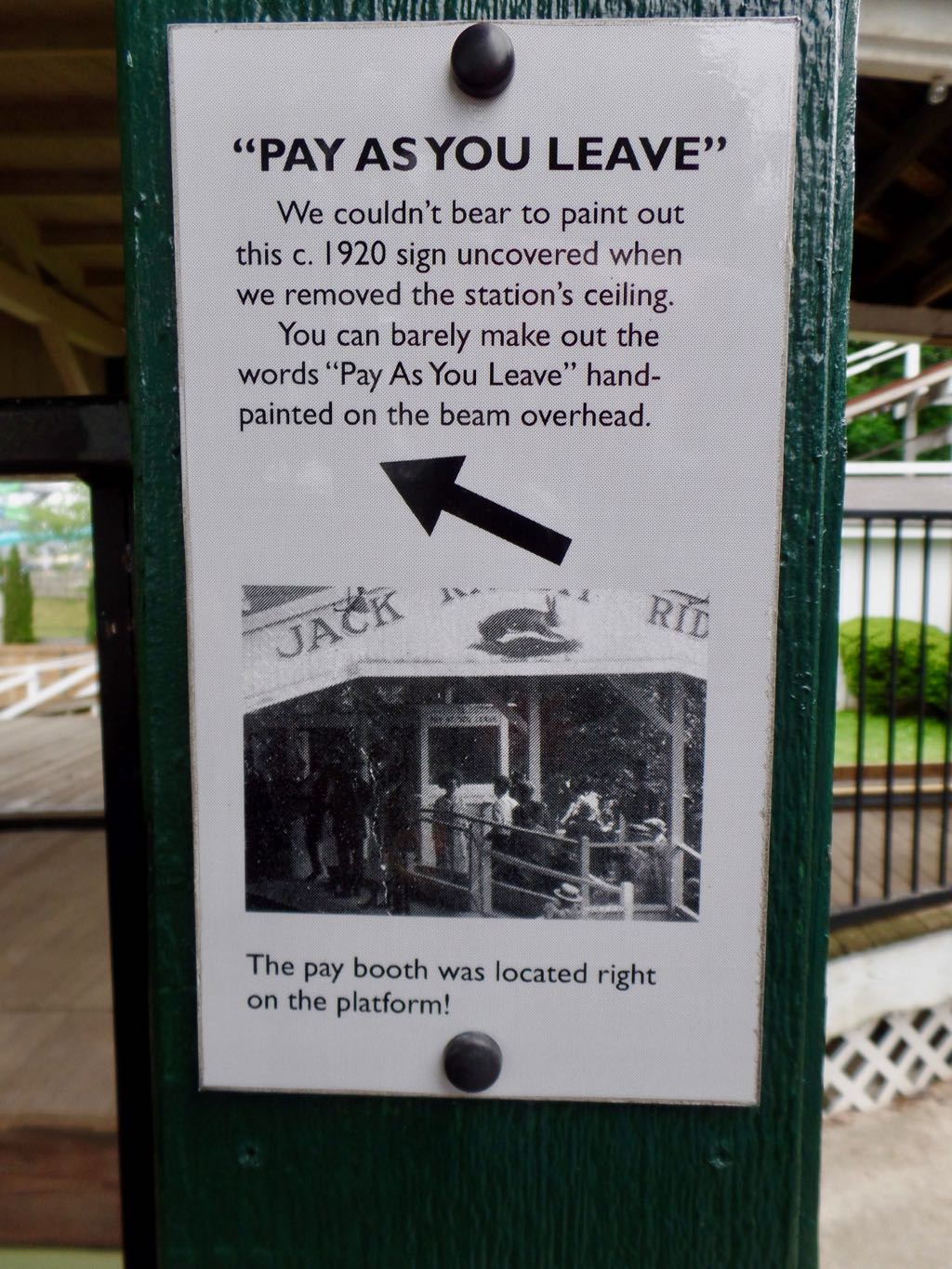 And, oh! So Seabreeze, like most parks, wasn't always pay-one-price, and they had a sign on the Jack Rabbit station to pay as you left. Which ... seems to present an obvious problem? But we don't know how they dealt with kids who didn't have their 15 cents on them. 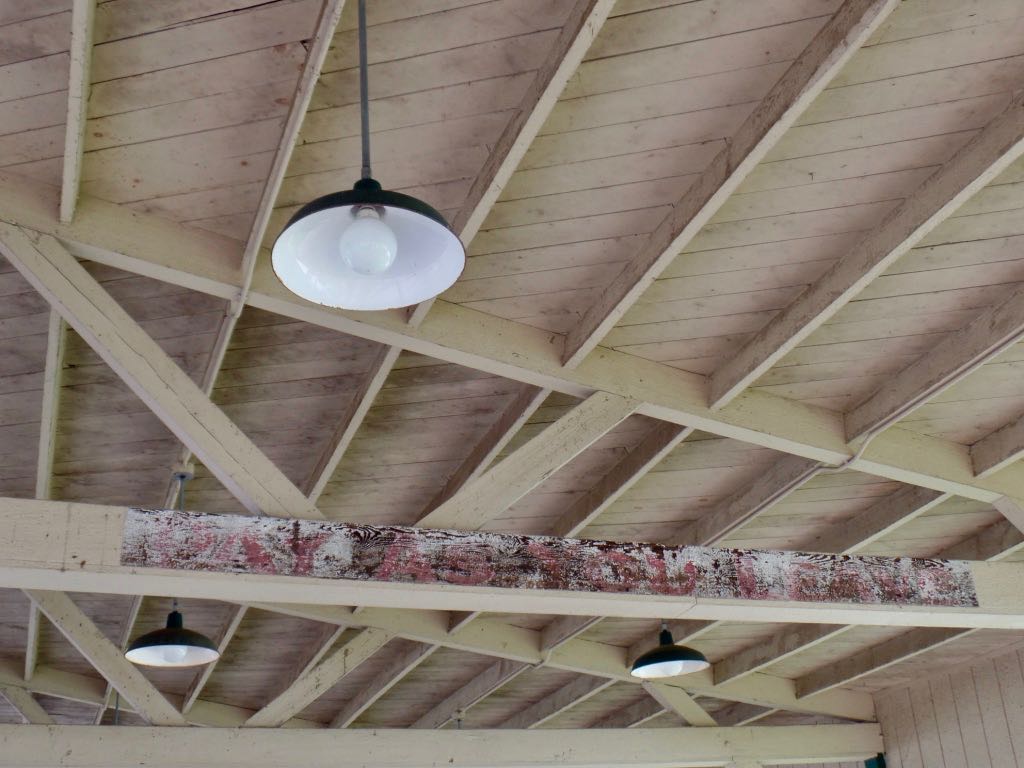 The 'Pay As You Leave' is not easy to read in any of the photographs I took, but is pretty clear when you're there on a bright overcast day. It probably reads pretty well in video too. You can see how well the station's been renovated and repaired, too. 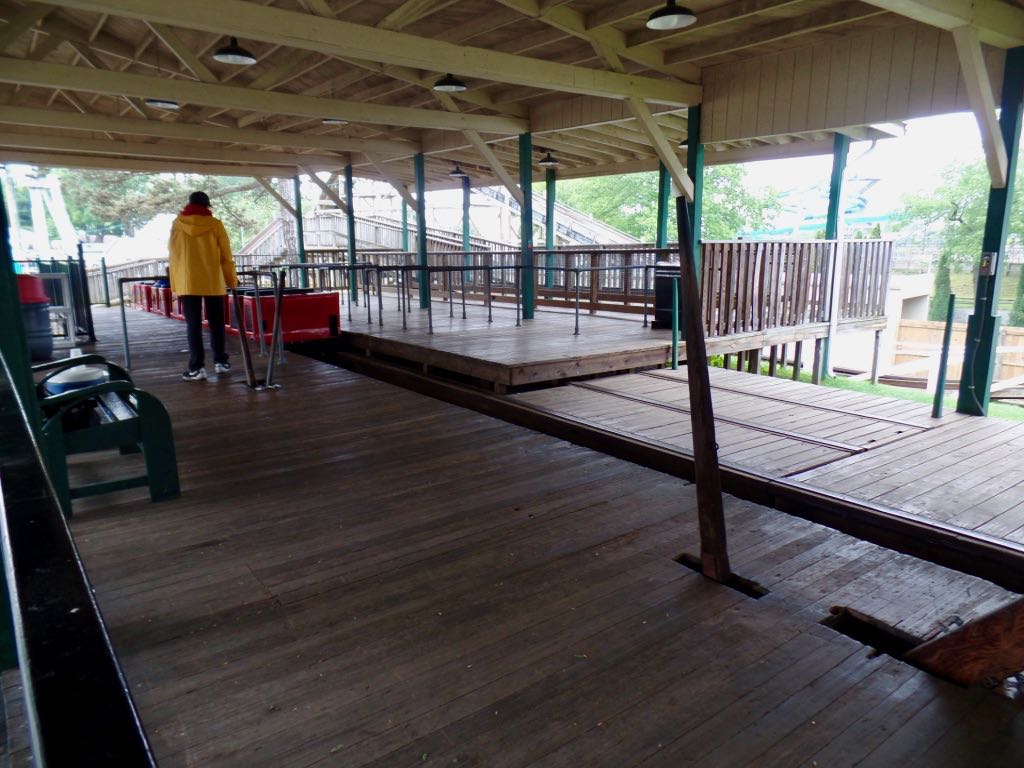 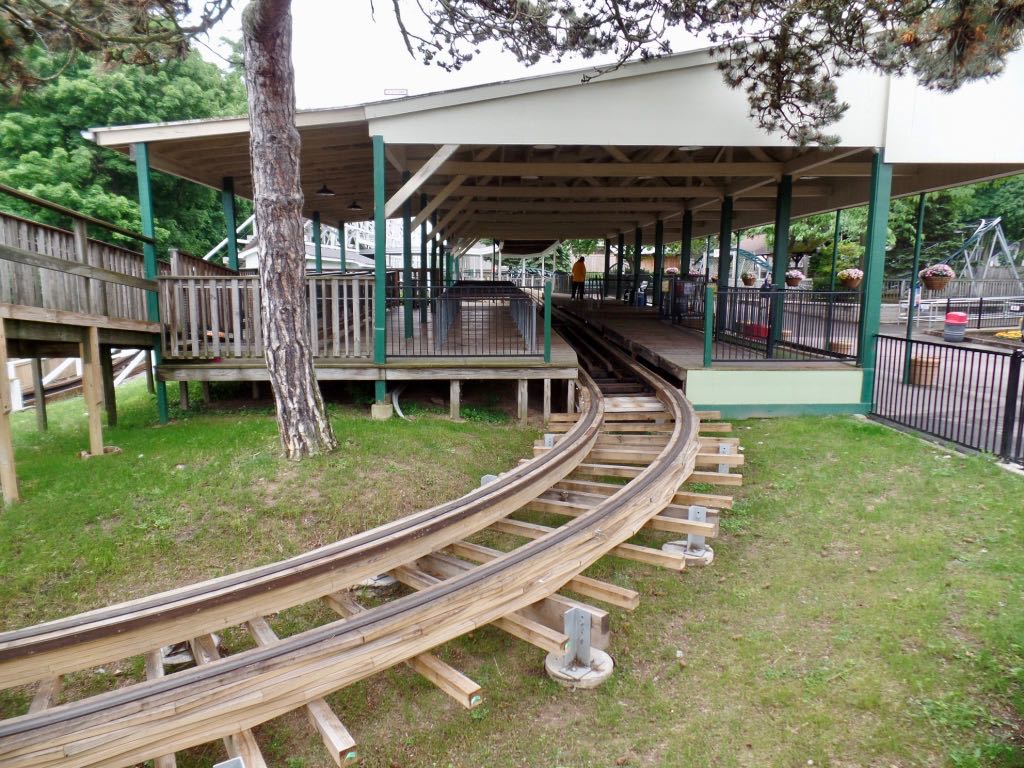 Since we saw it running we moved in! Here's the path the train takes on exiting the station, a slight drop and turn to go the lift hill. 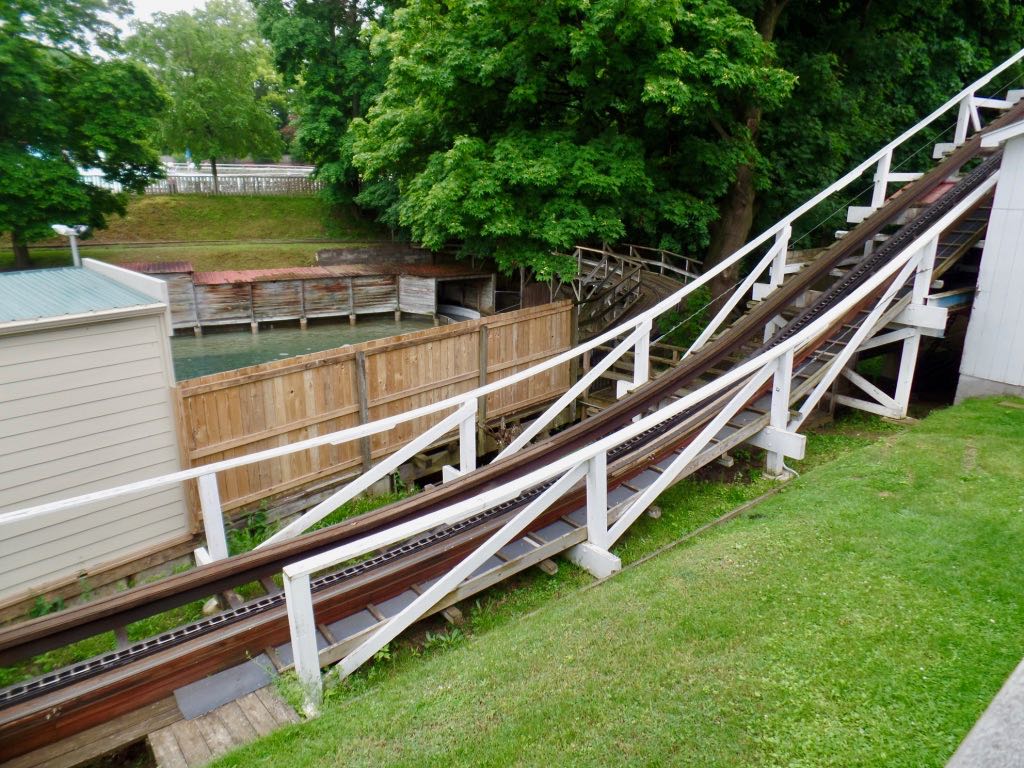 And the start of the Jack Rabbit lift hill. In the background is the scenic railway and the covered bridge it passes through. 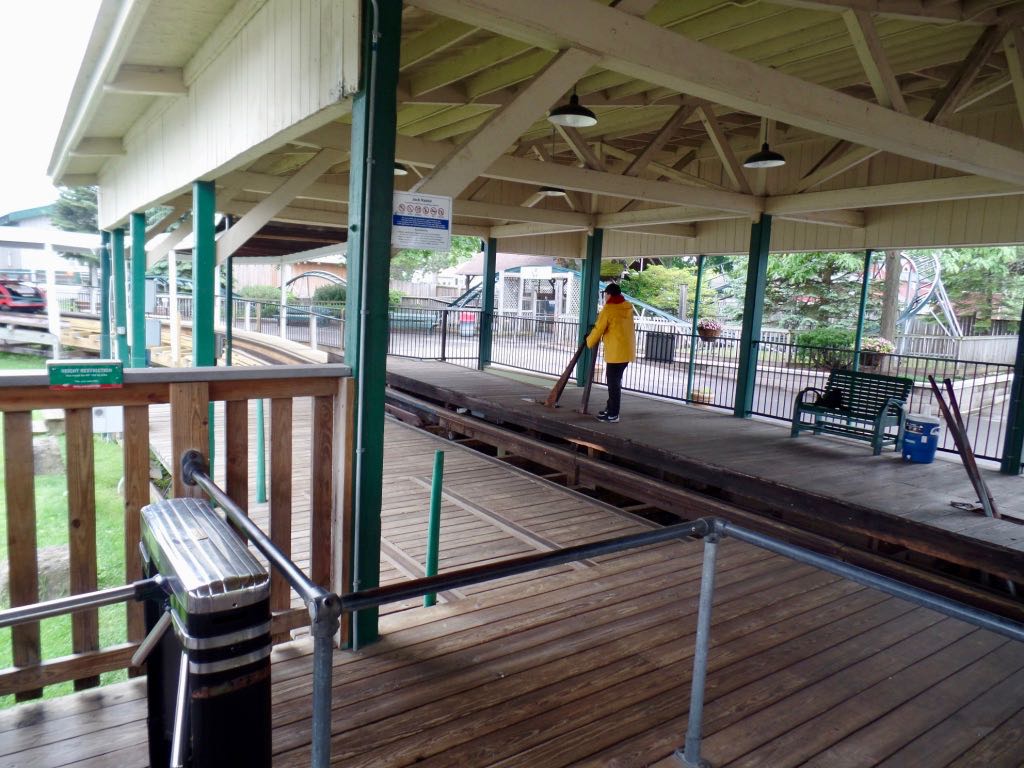 And the station! Operator sets the brake to stop the train as we figure out whether we can get a front-seat ride. (We could. We got there at opening for just this reason.) 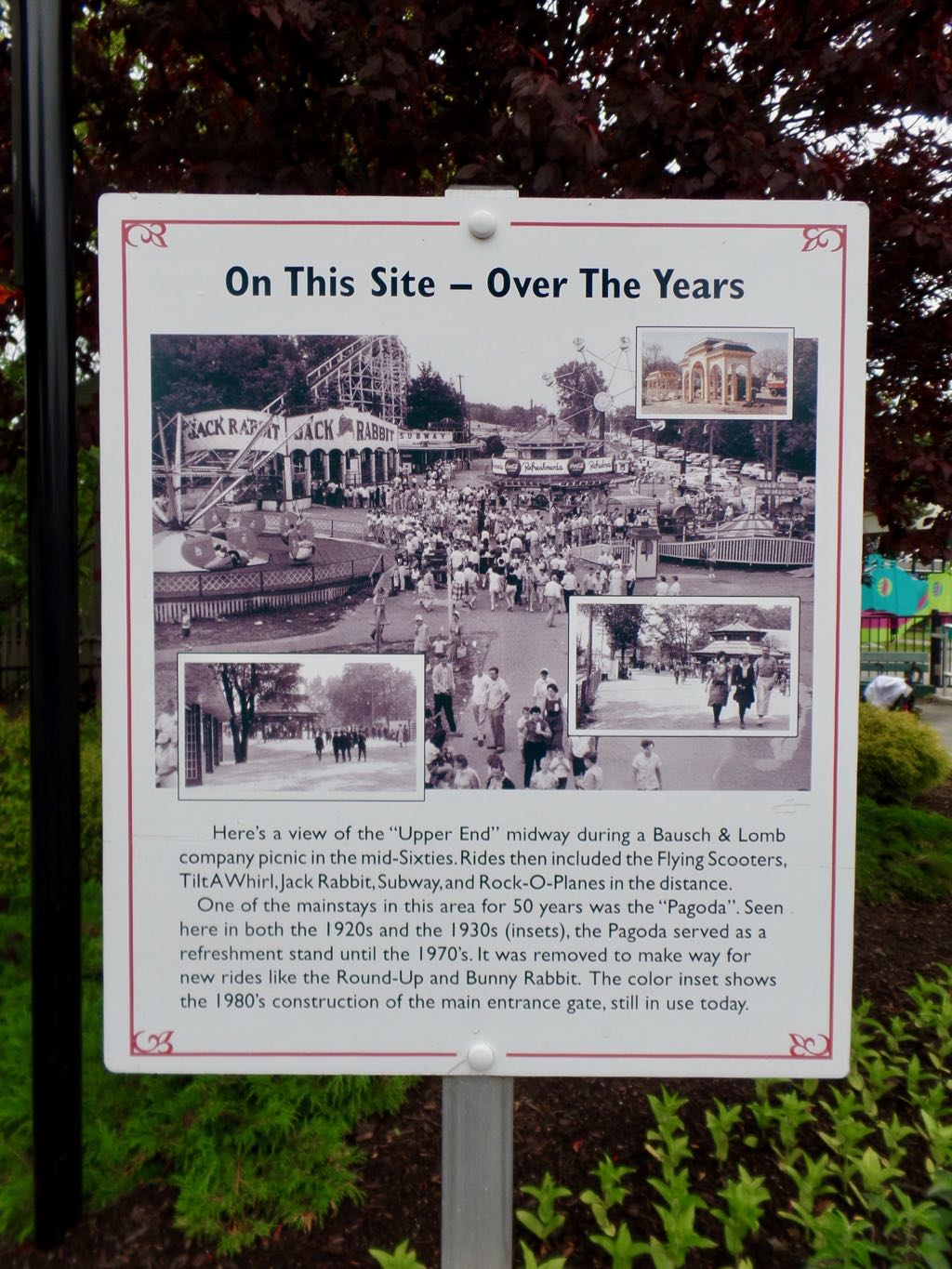 More park history, showing a mid-60s view of the northern end of the park.