If you don't believe what I've said is true

And now I take the chance to share my humor blog. It's got a piece that's utter nonsense this week and yet that I think will prove lastingly popular. We'll see. 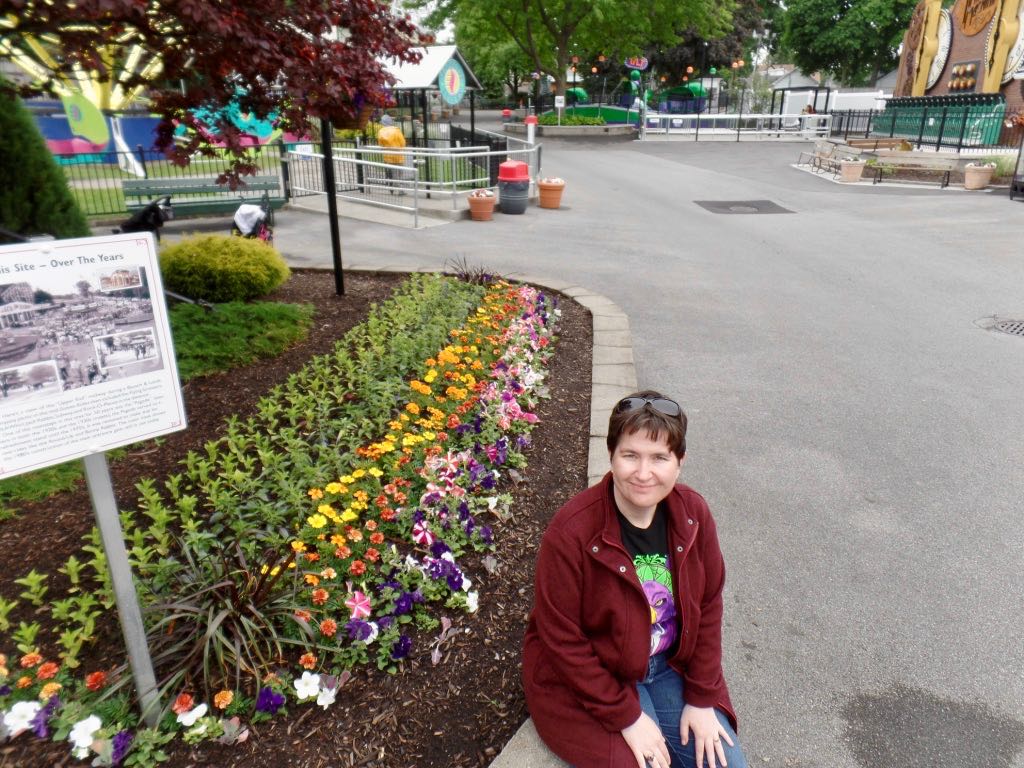 bunny_hugger sitting for a picture at one of the flower arrangements. Also notice she's wearing a jacket in June. It was a bit chilly. Jack Rabbit is not visible here, but it's above the picture frame, to the left. 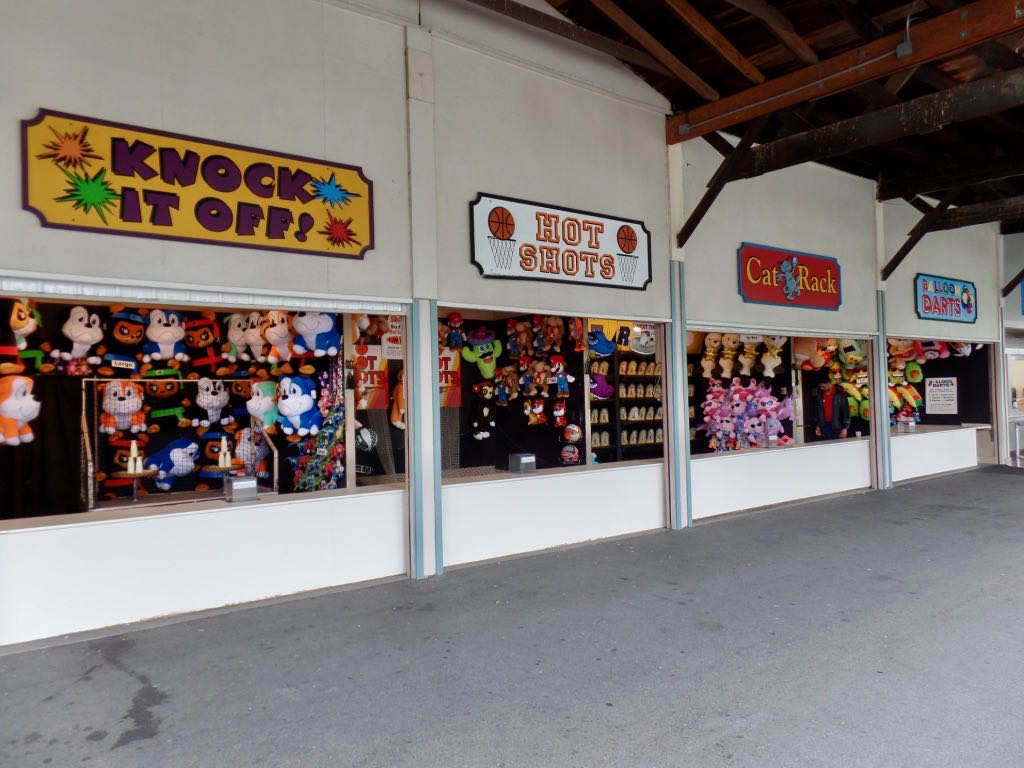 Some of the midway games. 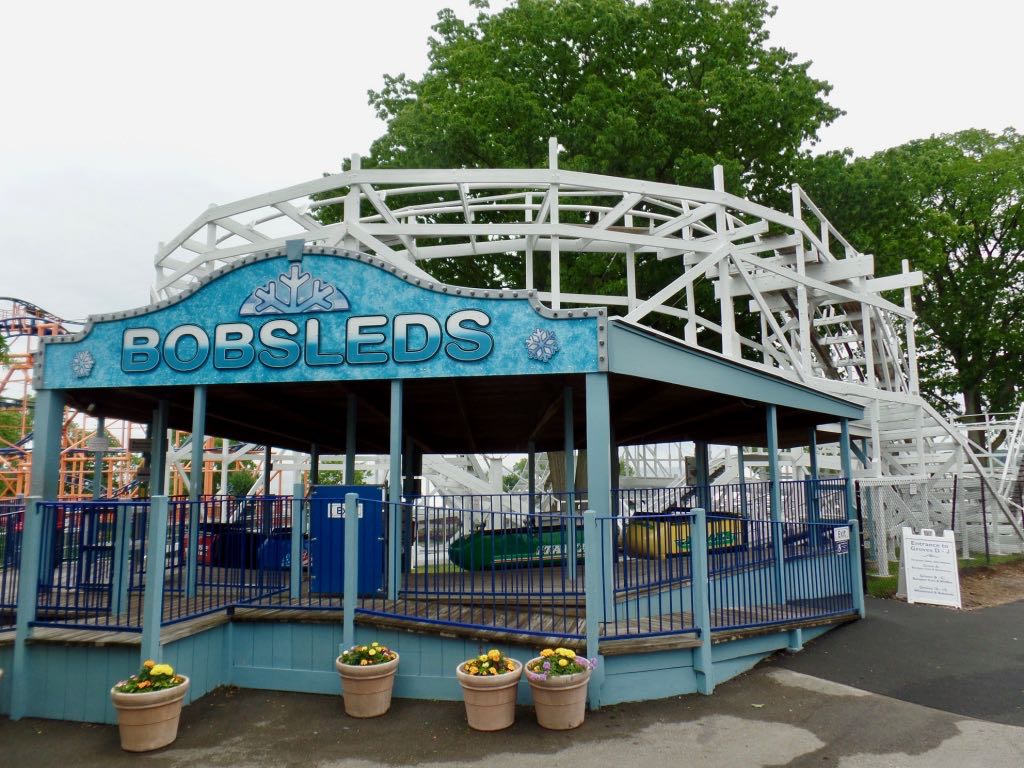 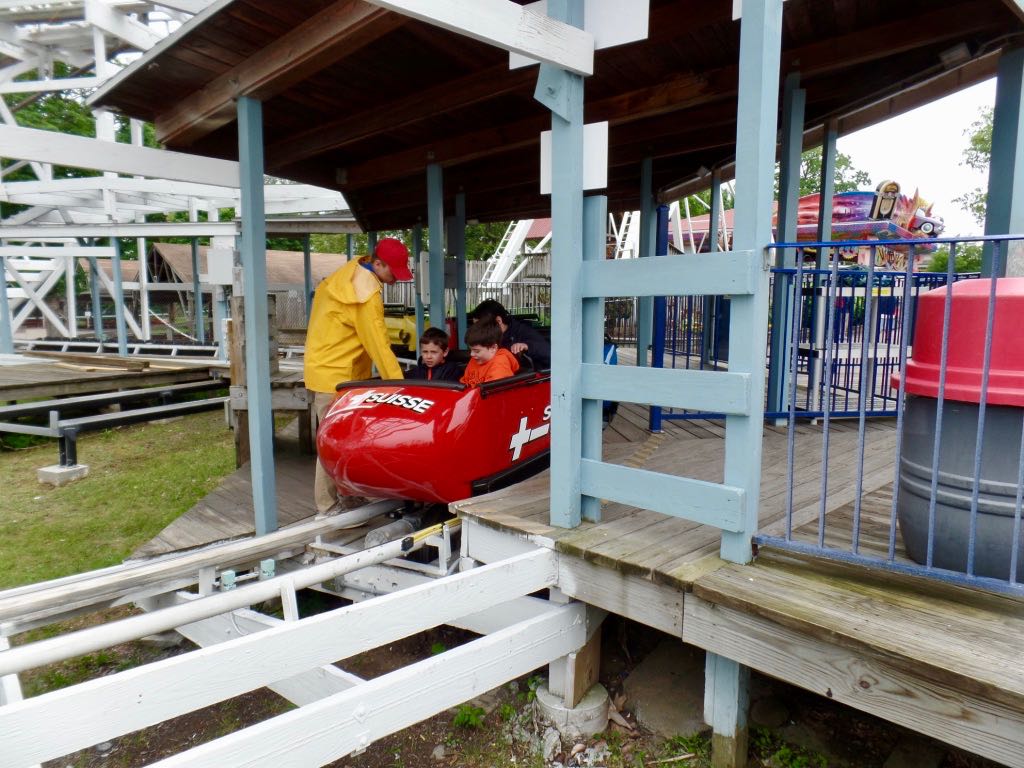 Bobsleds is a bobsled-themed coaster, although it's not a bobsled coaster. It's a small tubular-track roller coaster that's surprisingly fun. Here's a car about to leave the station. 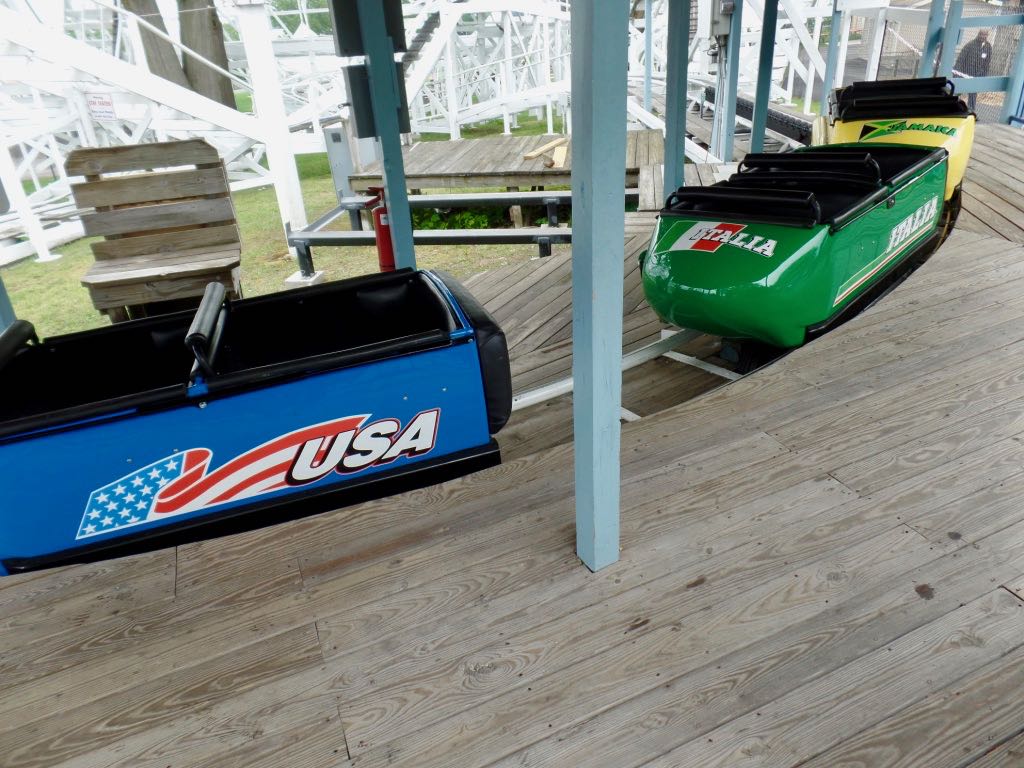 Each of the cars is a different country theme and of course Jamaica gets its entry. The coaster was originally a small junior wooden coaster, and then the park owner went to Disneyland and rode the Matterhorn and wanted some of that. So in 1962 they retracked it and expanded this ride. Whirlwind is Seabreeze's newest coaster. It's a spinning wild mouse, the same model as Steel Dragon at Waldameer. 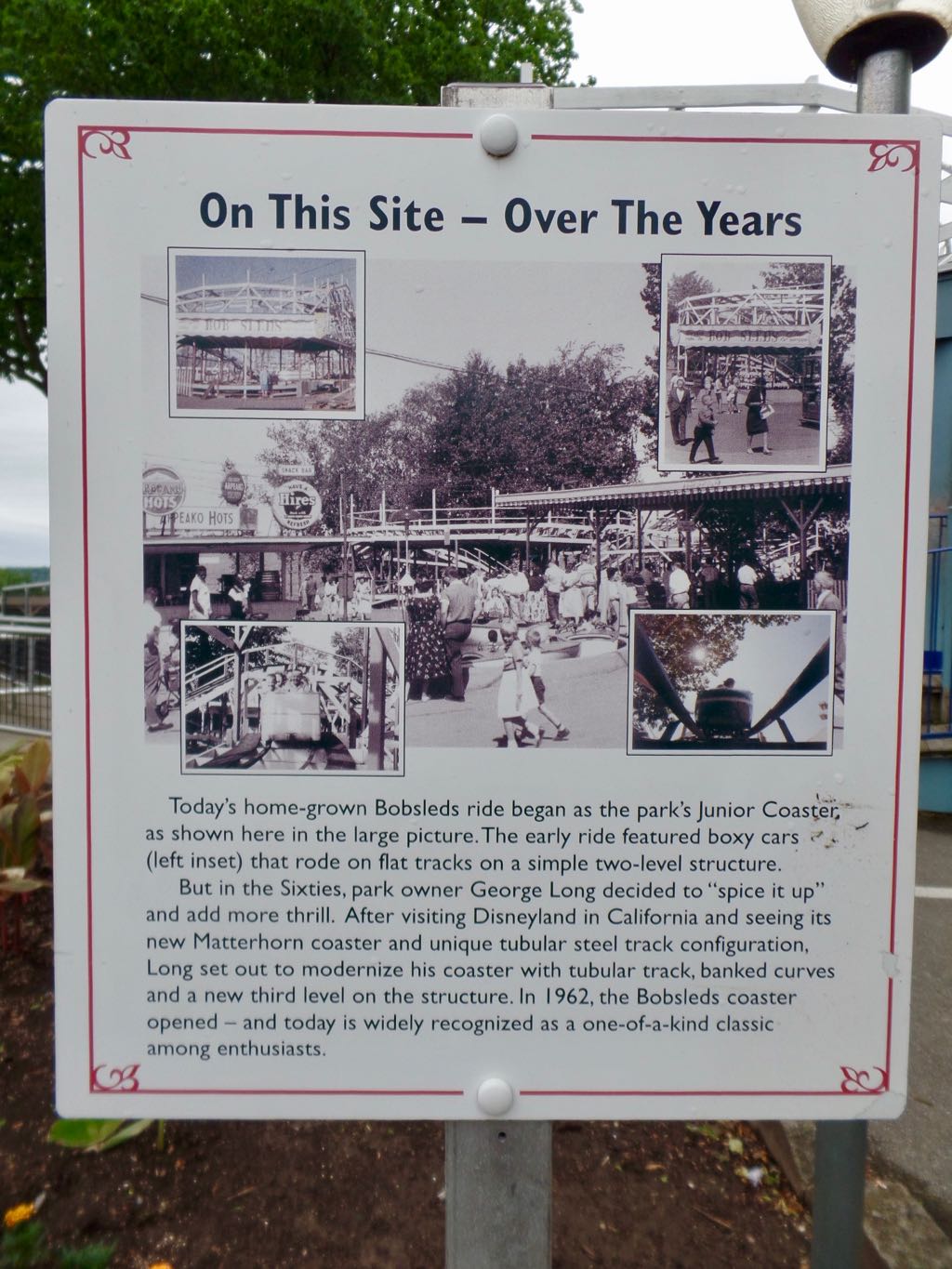 We had described Bobsleds to each other as feeling like the park wanted its own Matterhorn and then we came to this historical plaque explaining that's basically what happened. 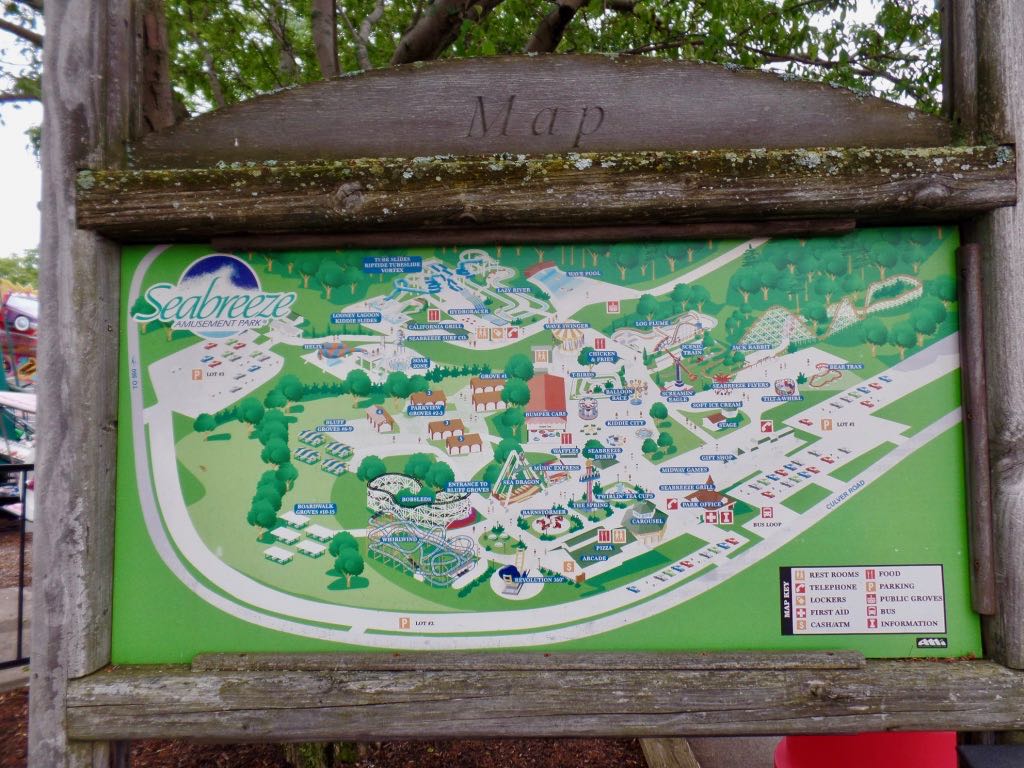 We did not find any printed park maps, so I took a photograph. I'll send a higher-resolution picture to anyone hoping to make their own replica of Seabreeze for Roller Coaster Tycoon. 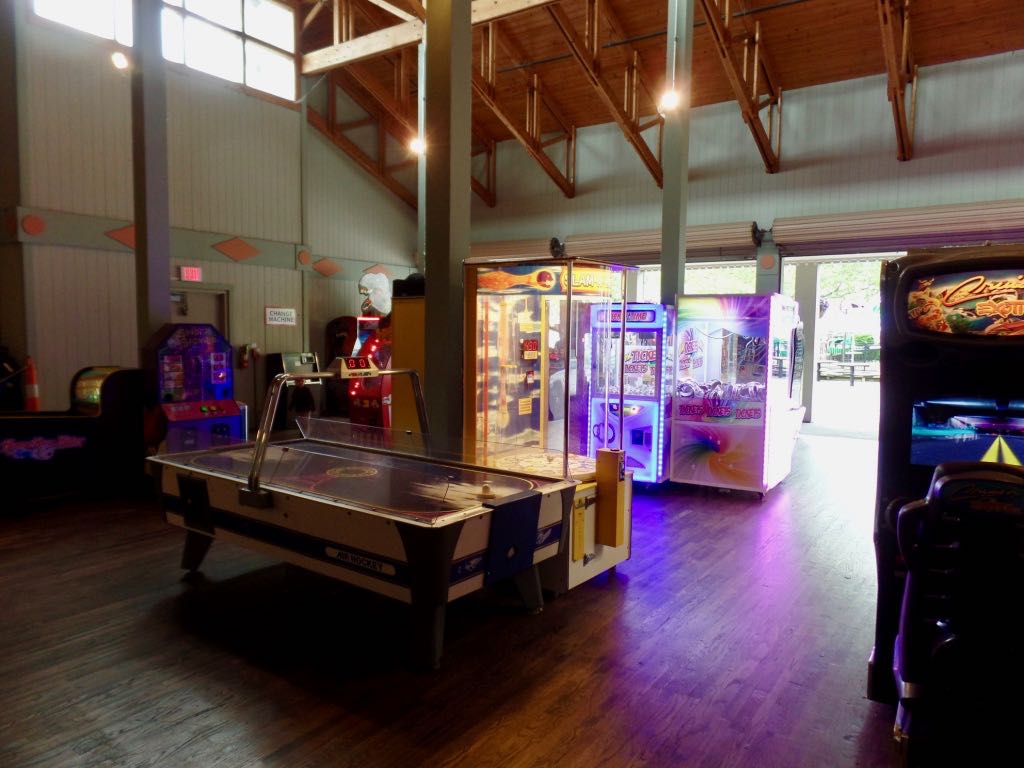 The arcade room at Seabreeze. We thought if any park we visited would have pinball this would, and were on this point disappointed. bunny_hugger playing the Killer T-Rex game. The goal's just shooting balls into the dinosaur's mouth, but it was a fun challenging one. 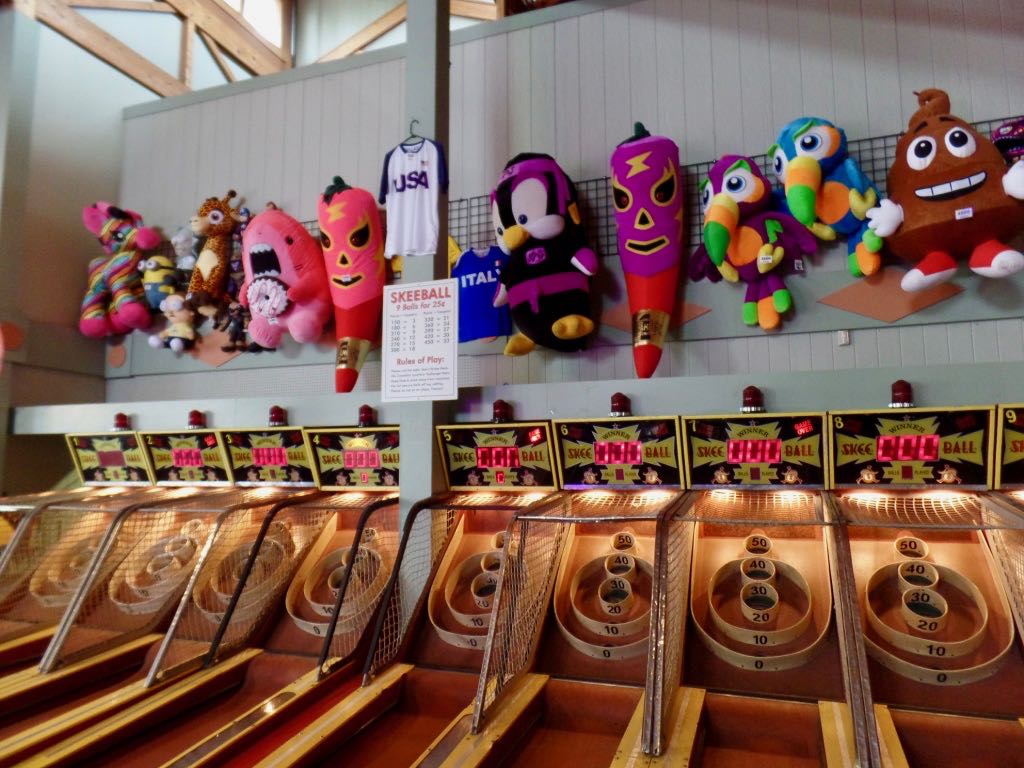 Skee-Ball and some of the prizes you could win, such as Mexican wrestler carrot. 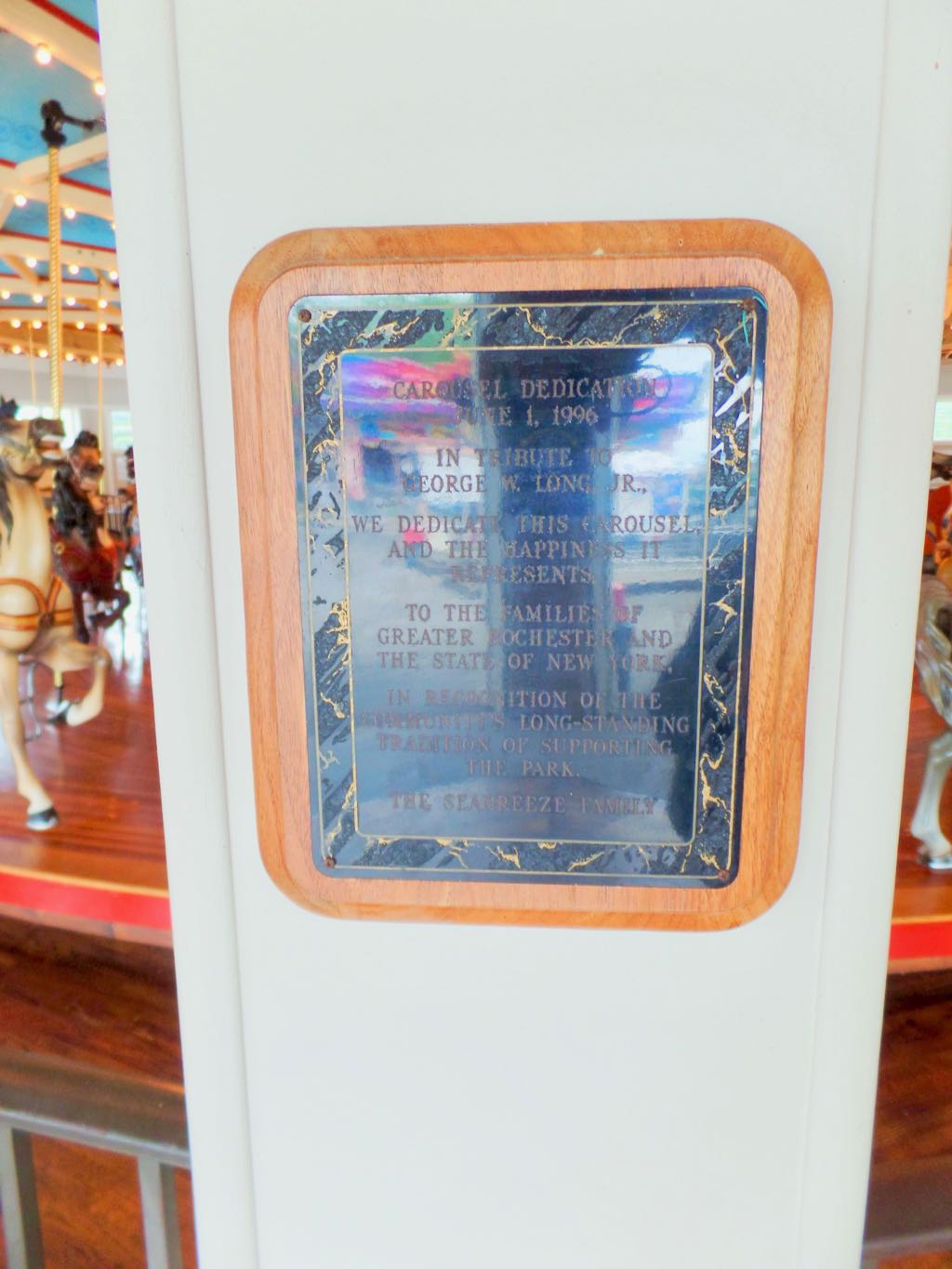 Seabreeze's antique carousel caught fire and burned in the 90s. Here's the dedication plaque for their replacement; ``Carousel Dedication June 1, 1996. In tribute to George W Long Jr. We dedicate this carousel, and the happiness it represents, to the families of Greater Rochester and the State of New York, in recognition of the community's long-standing tradition of supporting the park. The Seabreeze Family.''

Trivia: The September 1845 rules for baseball, published by the New York Knickerbockers Base Ball Club, specified that home and second base, and first and third bases, would be 42 paces apart. This likely assumed a pace of two and a half feet, for about 75 feet between bases, but is disputed. Source: Baseball Before We Knew It: A Search for the Roots of the Game, David Block. (Block points out, reasonably to my ear, that if by ``pace'' they meant something other than the common convention of two-and-a-half-feet, and meant just ``your average athlete's stride'', they would have used 40 or 45 paces rather than the un-rounded 42.)