People singing their song as they go along

I took my daily walk in the evening yesterday, as it's been hot. This put me in the right place and time to see a raccoon waddle out into the street, yoink some discarded junk food, and run back into the shrubs, which was great. Things went wrong when I got back.

First is the Nintendo Switch which, as yesterday's update mentioned, was not fixed. Not either problem. In my last series of go-rounds with Nintendo Customer Support hanging up on me I got a new number to call (1-855-349-9517) that's supposed to be a different zone of Customer Support and maybe able to explain why the Switch had been delivered by UPS, but not checked in by United Radio of East Syracuse, New York, for more than two weeks. I figured to call them again except that they're not open weekends.

Still. United Radio has a web site and lists a Consumer Electronics division and I e-mailed the General Manager, the Manager of Business Development, and the Operations Manager asking: do you fix Switches? If so, why not ours? And the General Manager answered me, first thing in the morning, asking for the repair numbers so he could investigate. I don't know that anything will come of it --- really at this point, what could they say or do that I would trust? --- but I am willing to make this a problem for more people.

And last came after

bunny_hugger had tried to go to bed. There was a bat in the room. So, sub-first, great job by the company we hired to exclude bats from the attic, although they would say the problem is that we re-roofed the house after their work. Sub-second, now I had to sit up and find the stupid bat who had gone into hiding in the curtains and disappeared. And after something like an hour waiting he finally emerged.

And was not a bat.

No, this was a katydid, which looks like a grasshopper and is the size of a VW Microbus, which is why in the dark I thought it was a bat. It makes clicking noises like a bat will do, too, which is why

bunny_hugger was frightened of the thing. And we ended up sinking all that time into it, I couldn't even get a picture, as the blasted thing was faster than my camera.

So, yeah, not been the best start to a weekend.

Well, let's spend some more time at Seabreeze Amusement Park, back in June 2019. 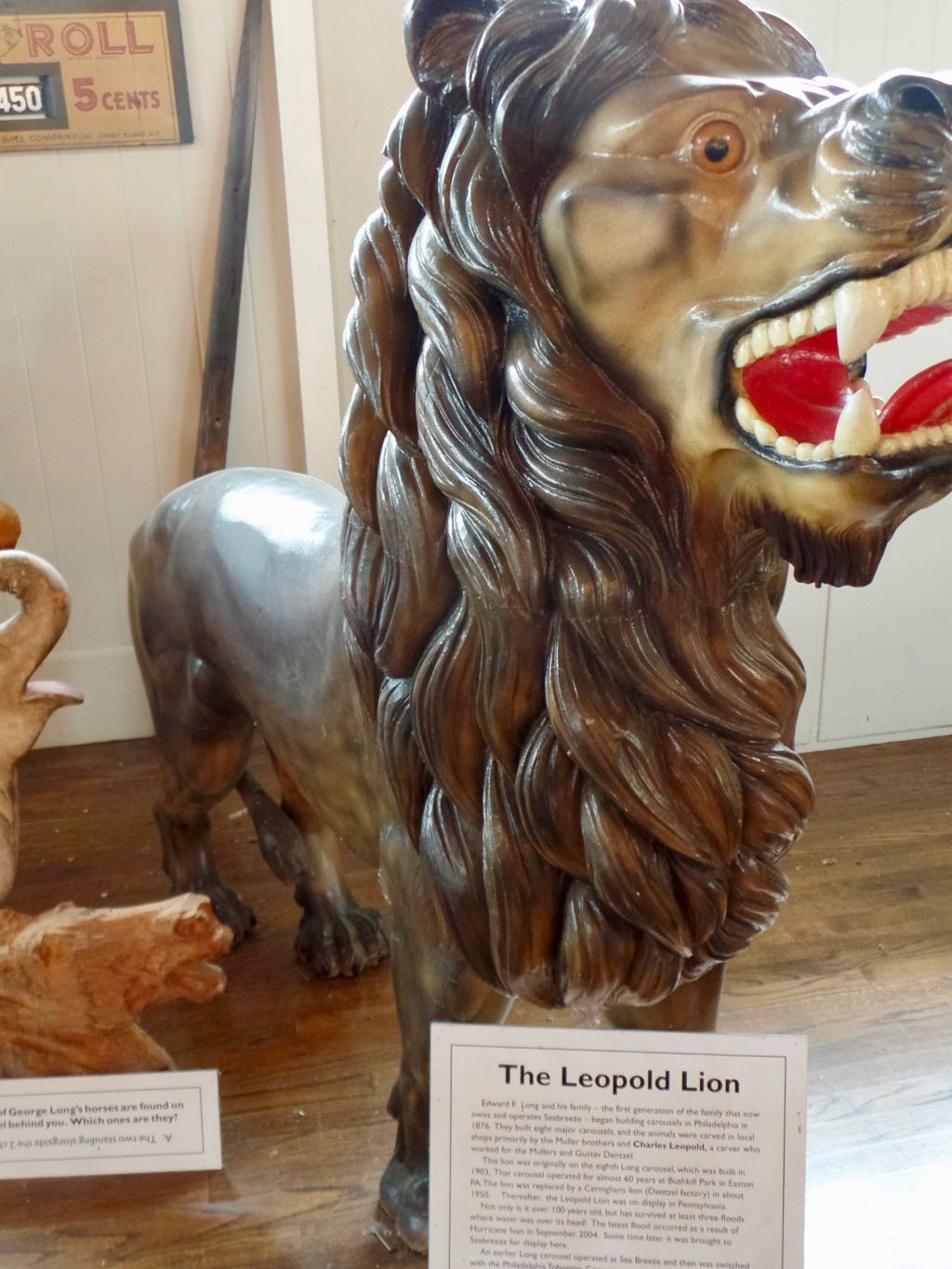 The Leopold Lion, named for Charles Leopold, a carver for the Muller brothers and Gustav Dentzel, 1900-era carousel makers. This one was carved in 1903 for the last of eight carousels that Edward F Long built. Long's family eventually took over Seabreeze, and still owns it, so carousels are a big part of the park's heritage. 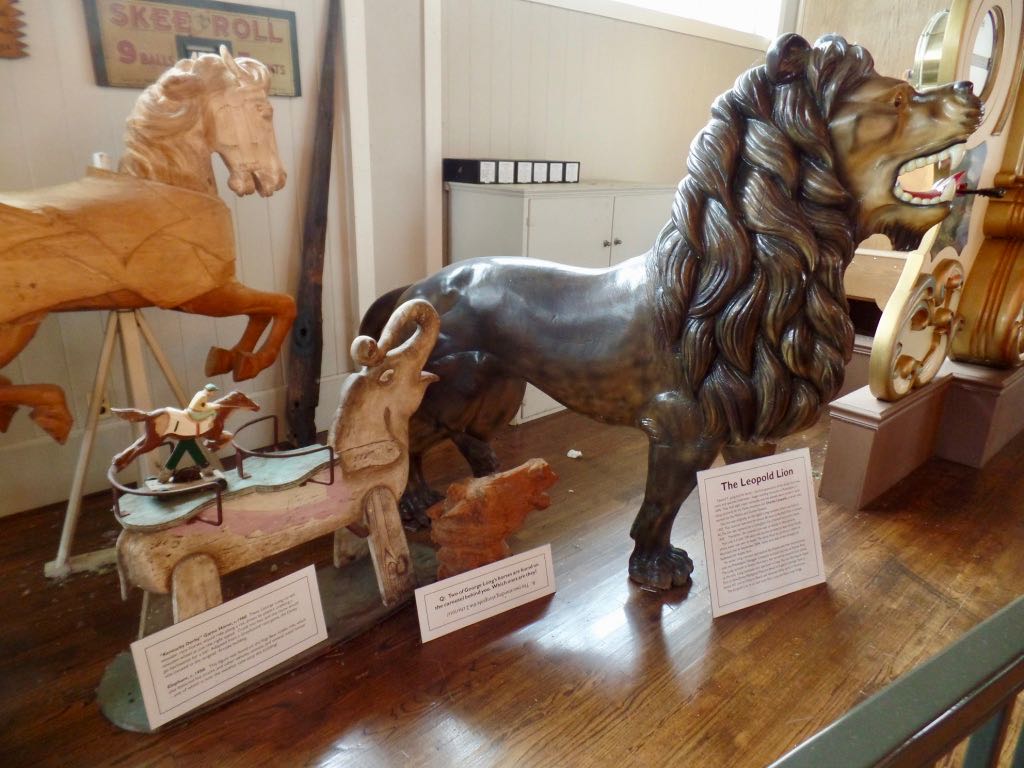 Here's the lion beside some other antique carousel pieces on display by the band organ. 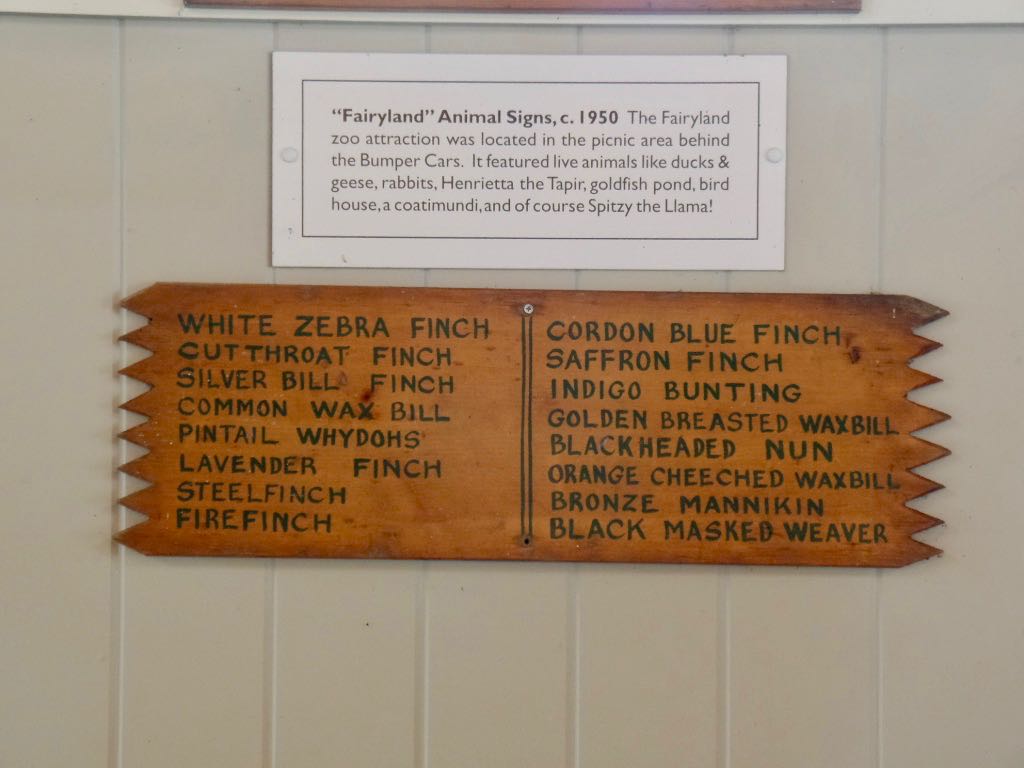 A sign from when the park operated a Fairyland Petting Zoo, here showing off the kinds of birds they had. And, oh, yeah, the zoo had animals you might expect to see like ducks and geese and rabbits and ... a tapir and ... a coati ... and a llama ... and boy am I not enthusiastic about the lives lived by exotic animals in a small, family-owned park in Rochester, New York, in the 1950s. They also had at least one raccoon, though I can't say when. The sign was of the same style as that one listing the many birds. 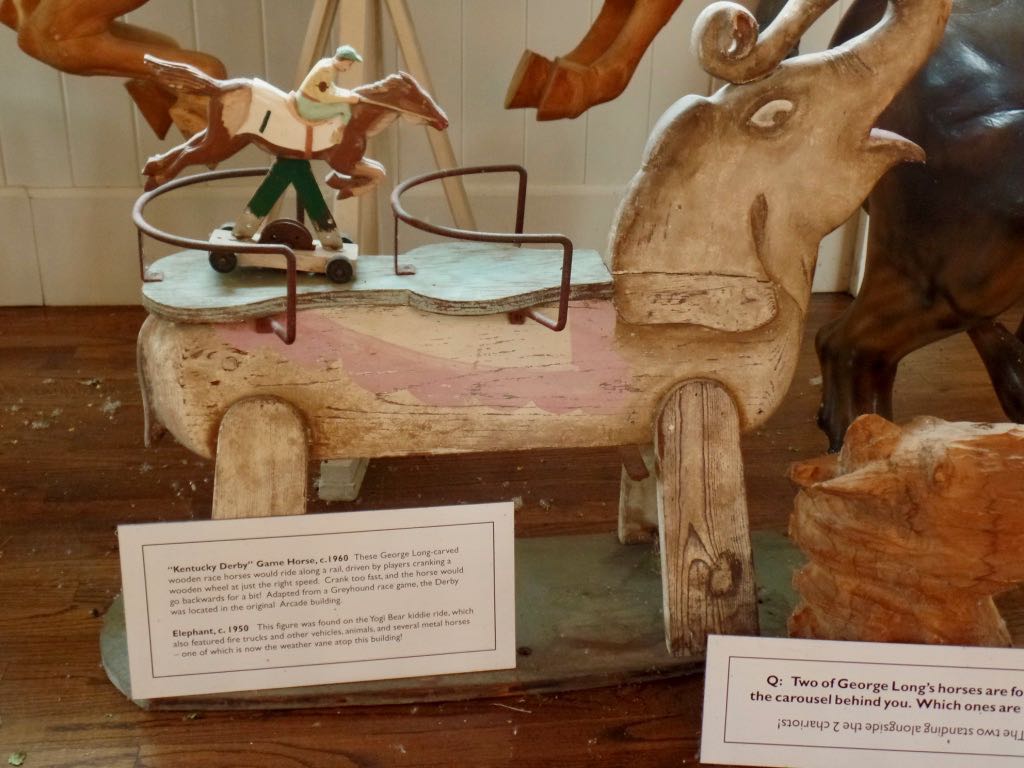 Better look at the carousel exhibits, though, including racehorses from a midway game that George Long carved, and an elephant figure which had been on the ``Yogi Bear kiddie ride'' and is dated to circa 1950. 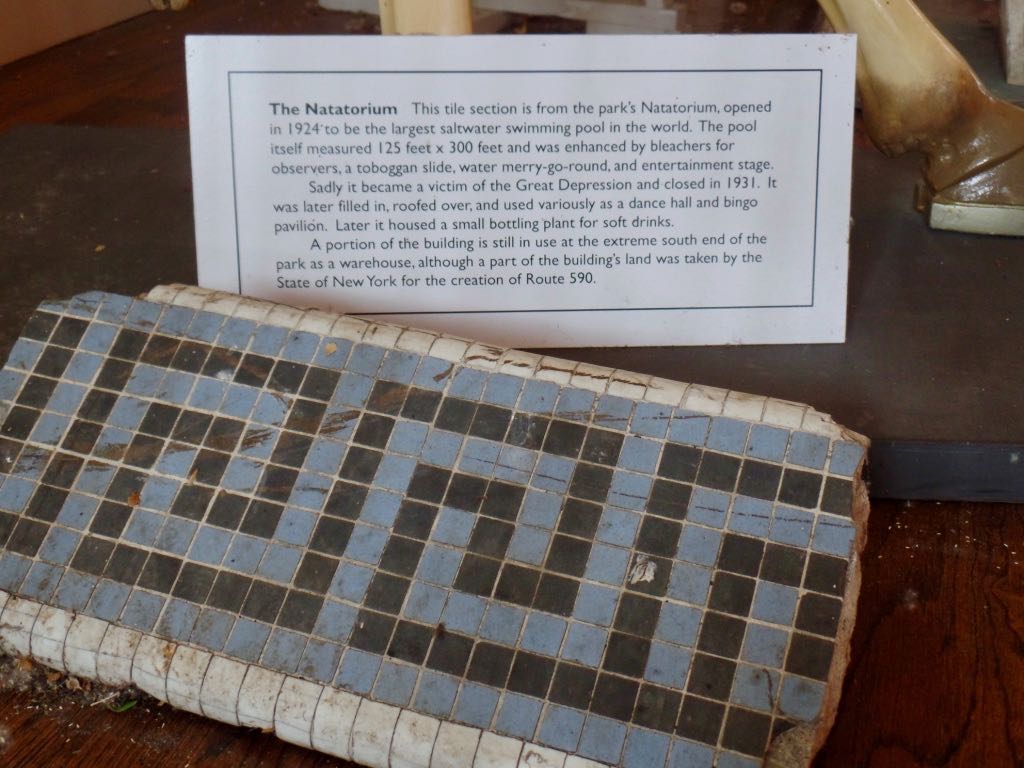 What first made Seabreeze was the ``largest saltwater swimming pool in the world'' and while I would think fresh water the more appealing, hey, they're on a Great Lake, you have to give something novel if you want to charge for it. 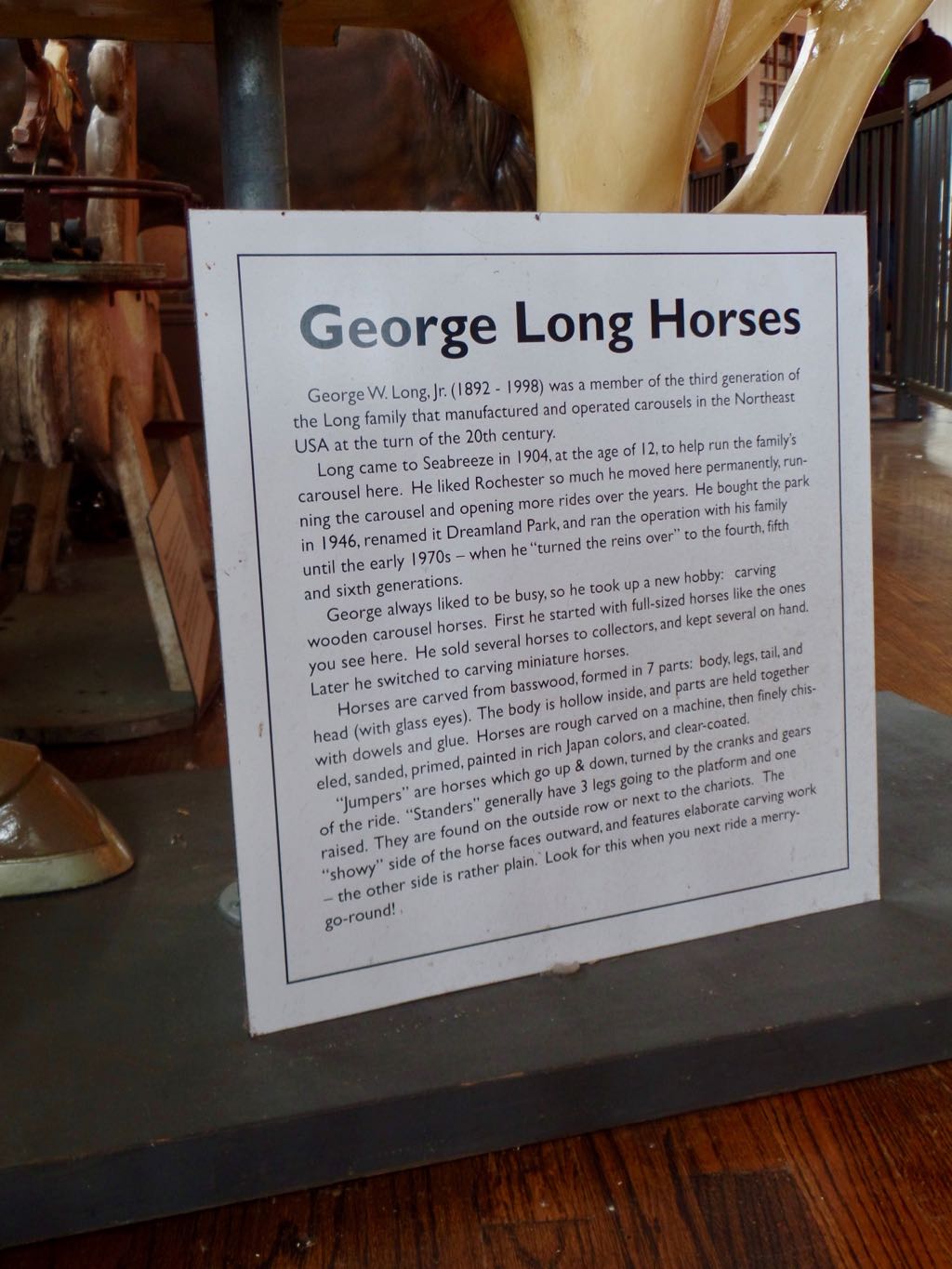 Here's a sign explaining more about George Long's carving and also about carousel horses in general. George W Long, you'll see if your eyesight is good, was the third generation of carousel makers-and-operators and he came to Seabreeze in 1904. Bought the place in 1946. The park's now in its sixth generation which is awesome considering these things usually fall apart by the third or fourth generation at latest. 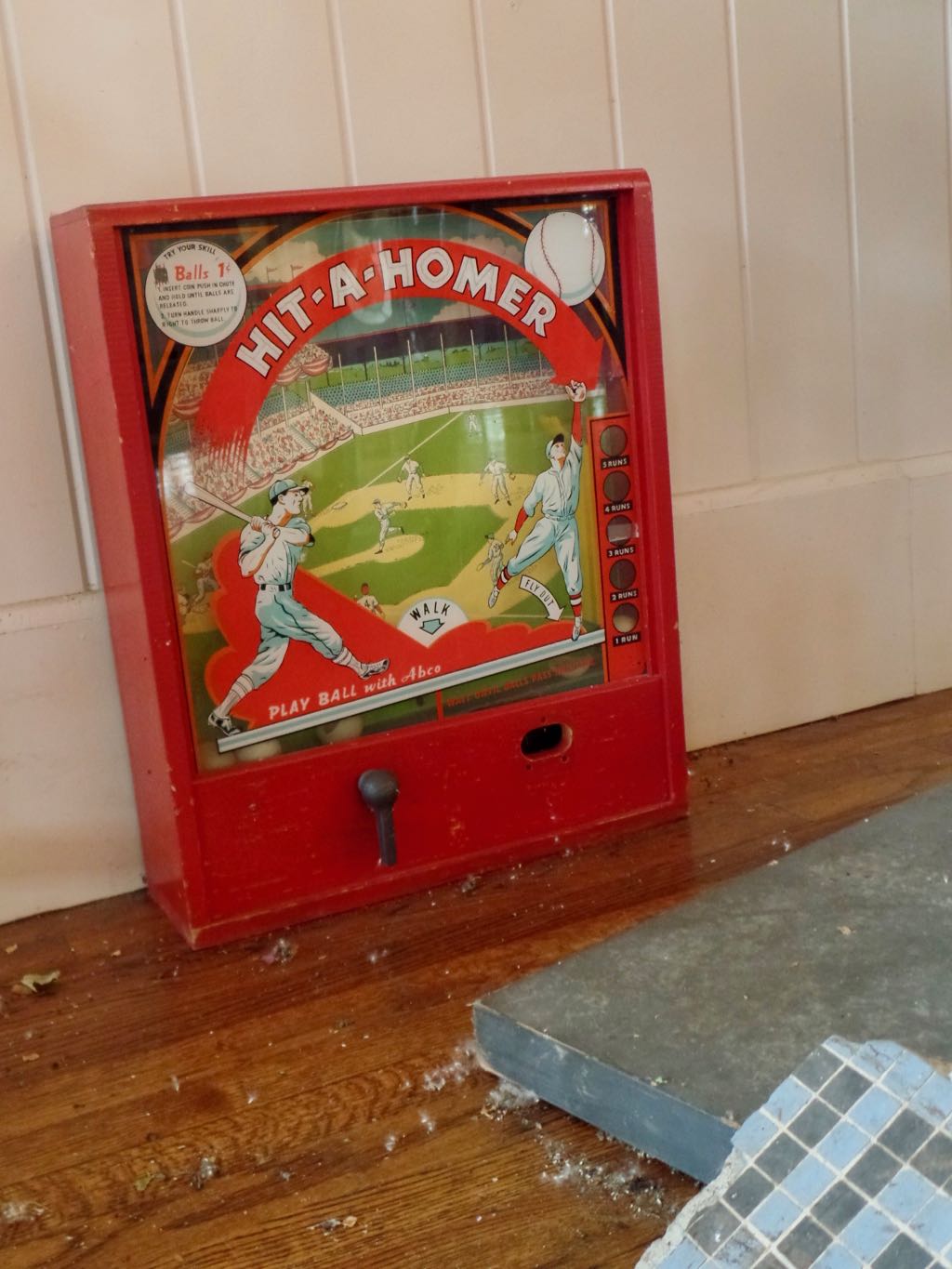 Hit-A-Homer, a once-operating arcade game. I assume it's a flipper game with the challenge of swatting the lever at just the right moment. 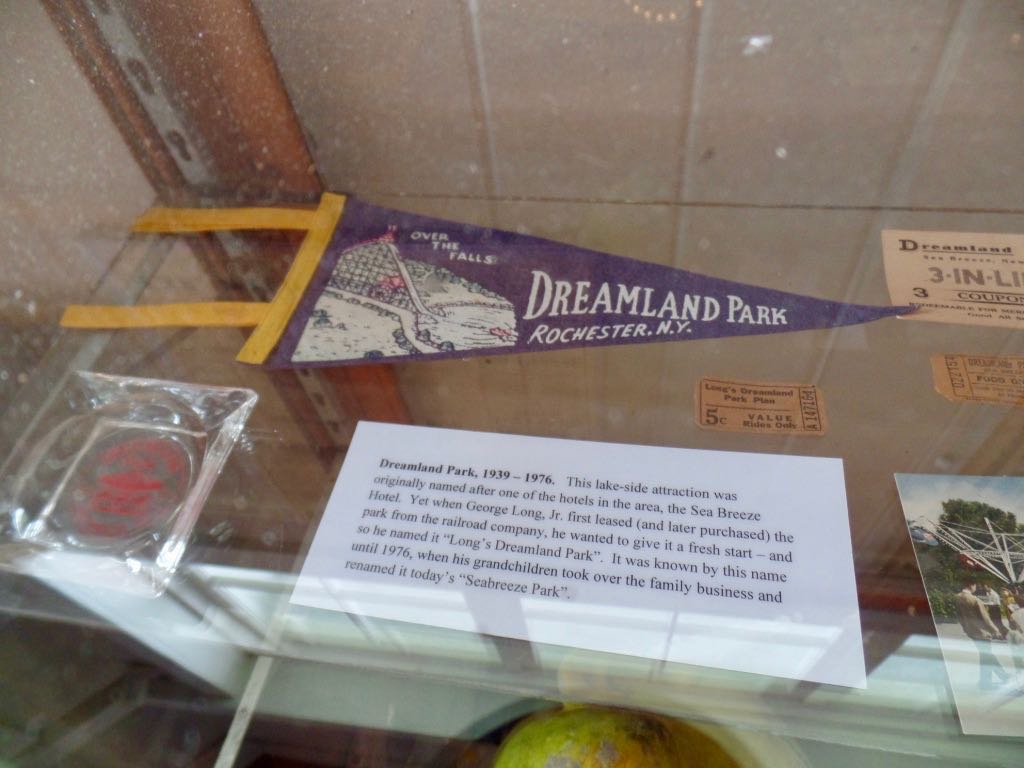 Some old Seabreeze souvenirs. For several decades the place was known as Dreamland. The Seabreeze name, it turns out, comes from an area hotel. s 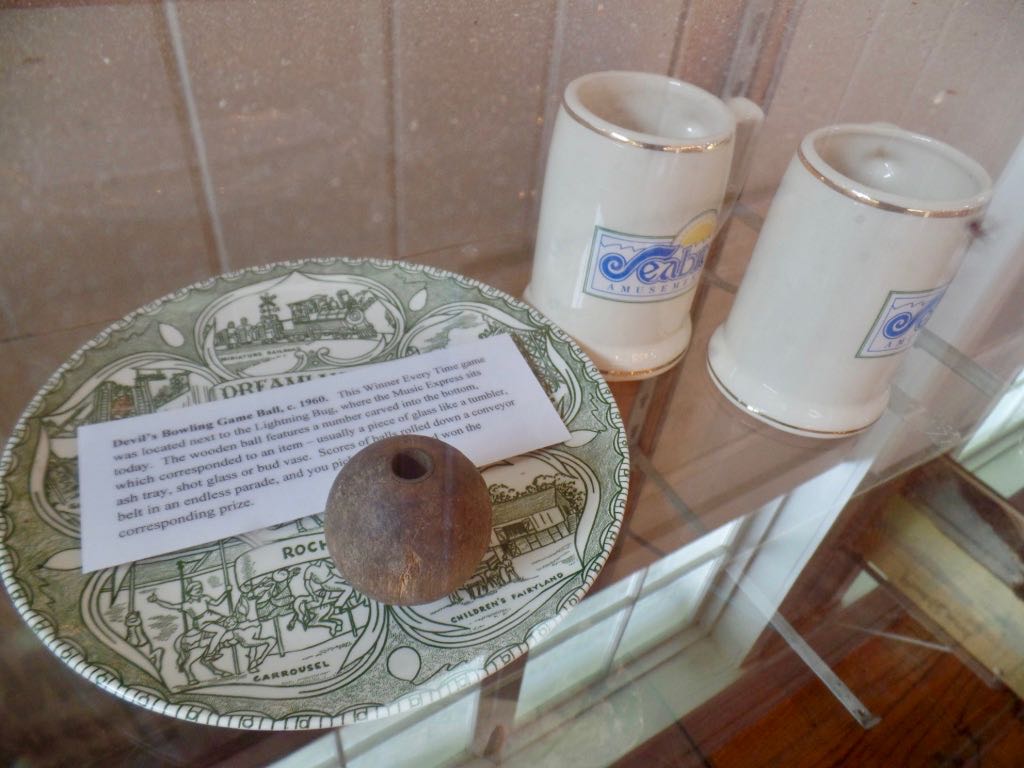 Vintage plates and glasses, plus the weight for a winner-every-time midway game. 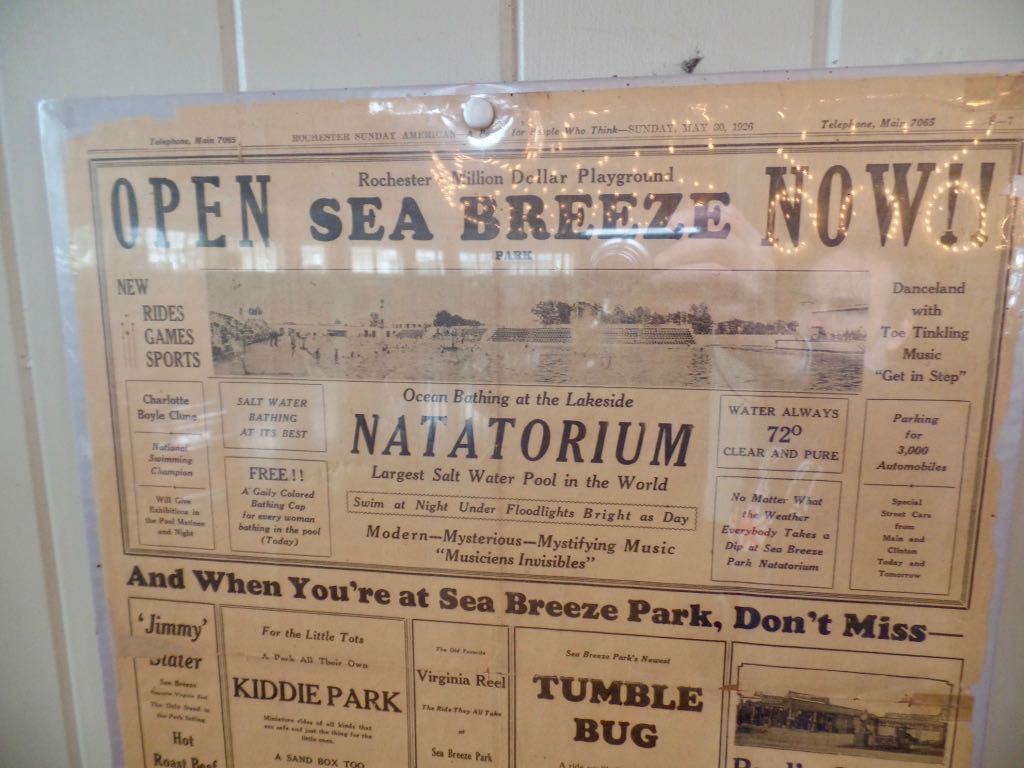 1926 newspaper advertising the opening of the Natatorium. Among the attractions, a free ``gaily colored bathing cap for every woman bathing in the pool''. Also, they had a Tumble Bug! Those rides are now all but extinct; the only two instances I know of are at Kennywood and Conneaut Lake Park. 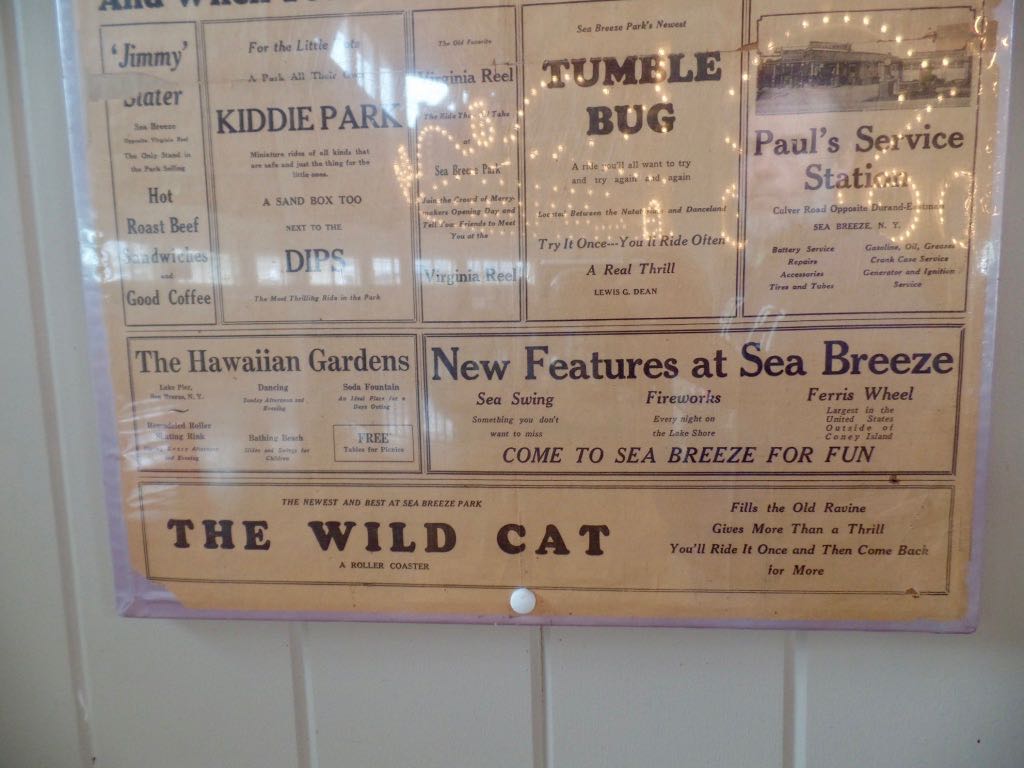 More of that newspaper page. Three roller coasters get featured here: the Dips (``the Most Thrilling Ride in the Park'', which Kiddie Park is next to) the Virginia Reel (``Join the Crowd of Merry-makers Opening Day and Tell Your Friends to Meet You''), and The Wild Cat, ``A Roller Coaster'' (``You'll Ride It Once and then Come Back for More'', which is some stronger ballyhoo for 1926). 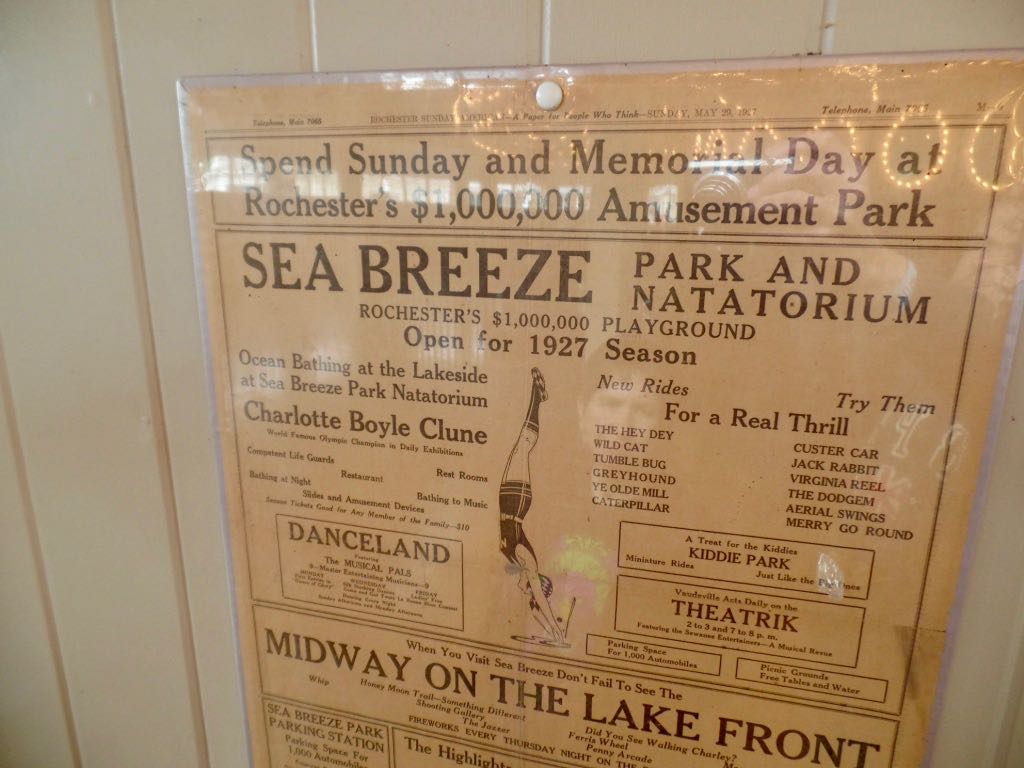 And an opening day newspaper for the 1927 season. Curious about that ``Hey Dey'' thrill? Watch this space, unless I forget.

Currently Reading: Origins of NASA Names, Helen T Wells, Susan H Whiteley, Carrie E Karegeannes. NASA SP-4402. ... There was a program of satellites named ``Injun'' (built by the University of Iowa, designed to observe ionosphere phenomena) and this doesn't rate even a sentence about what the, I'm assuming, very funny person who named that was thinking?