Where the stars shine bright

There's a GoFundMe up for Marvin's Marvelous Mechanical Museum, which is still closed per state orders and per all reason and sense. The place is a real treasure so if you are able to spare it and are able to support just a really precious thing of southeast Michigan please give it some consideration.

So, the Switch. I got an e-mail from one of the other people at United Radio that I e-mailed, and gave the repair numbers. Their claim was that the records say the first time around they replaced the Wi-Fi and Bluetooth, tested it and found everything was working fine. Then the second time around they were ``not able to find an issue'', and tested it again finding no issues with the Wi-Fi.

I do not know whether they are lying to me, or their records are lying to them. But my plan was to record a short video showing that, like, the Joycons do not work when taken off the base unit. This because there's no possible way to blame that on our router, or how we configured anything, or anything. You take the joycons off, they flutter around a moment, and they either connect or do not connect, and since they do not connect, bam. The only way that they could fail to reproduce the issue would be if they never did the test at all.

So we got that done and e-mailed that in. I did not actually specifically say they were lying, but I did say: this Switch never passed any tests. They e-mailed back to say they got the video, and passed it on to the technical manager of the department. And asked if I have a new repair order through Nintendo. So I went through an hourlong chat with Nintendo through their web site before they gave me another higher-level phone number --- +1(877)803-3676 --- to try. Also a satisfaction survey. I know that filling out anything besides ``this was the greatest experience of my life'' on these surveys gets someone who actually works punished, but I can't pretend that any part of this has been anything but excruciating and that nobody on Nintendo's part has done anything to make it less bad.

Story strip updating. Want to know What's Going On In Mark Trail? Is Mark Trail ever coming back? June - August 2020 saw the last new Mark Trail plot until ????? and the first of the rerun stories.

By this point in our day at Seabreeze we had been to all the adult-sized rides and we were going back to stuff that caught our interest. This was roller coasters, obviously, with Bobsleds and Jack Rabbit taking pride of place, but also the carousel which offers such nice little identity problems. (Like, if you replace the train on a roller coaster but not the track or mechanism, most people say it's the same roller coaster. But here? The frame and mechanism of this carousel had been Philadelphia Toboggan Company #31, formerly at Indian Lake Park in Ohio, but, like, it's not listed as a PTC carousel anymore. Fair enough in that none of its mounts were PTC-carved, but, if it had been PTC #31 and they just replaced one horse a year with a new-carved one, I bet it would still be listed.) 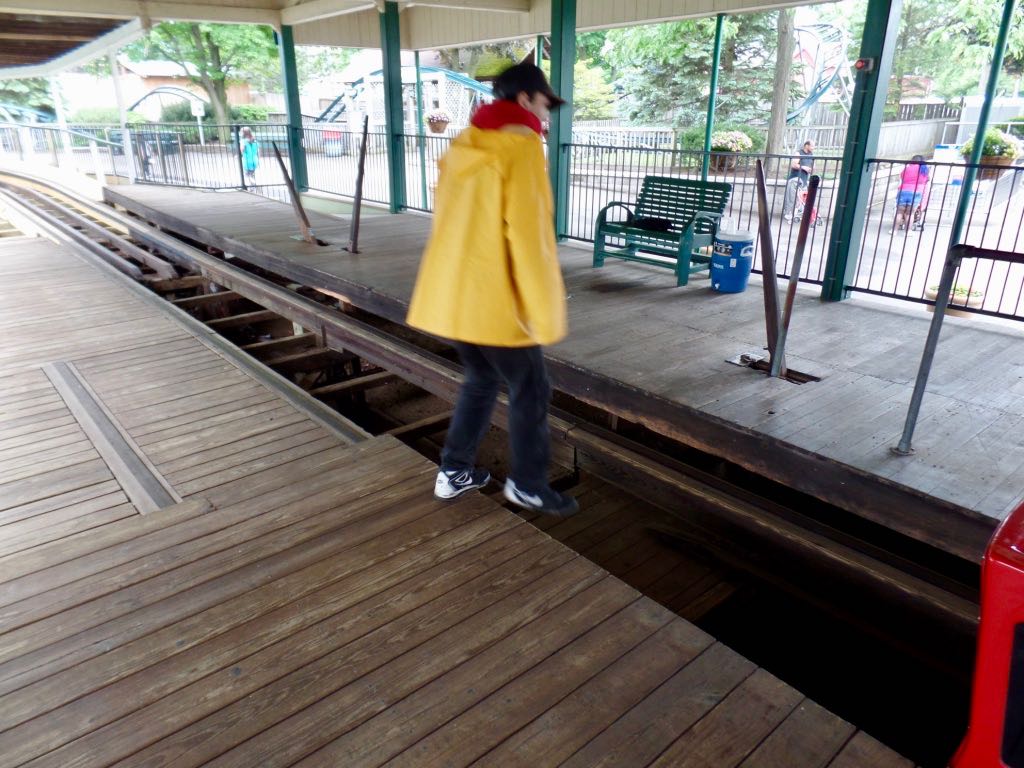 To Jack Rabbit! A ride operator crosses the track as the Jack Rabbit's just begun its cycle. 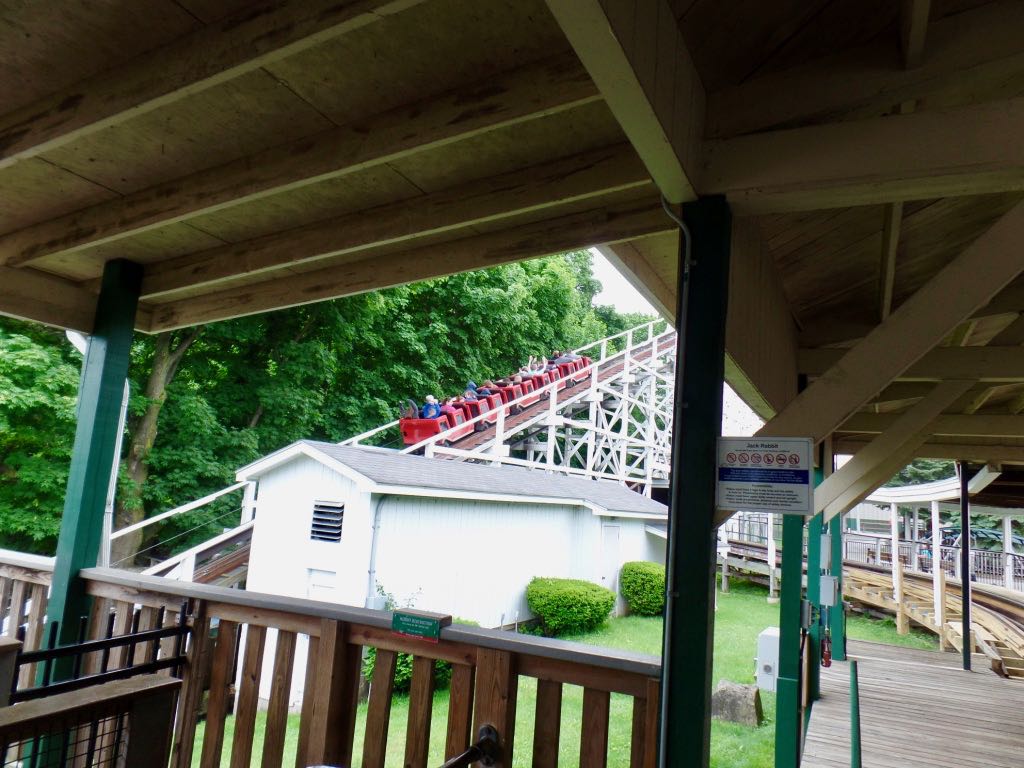 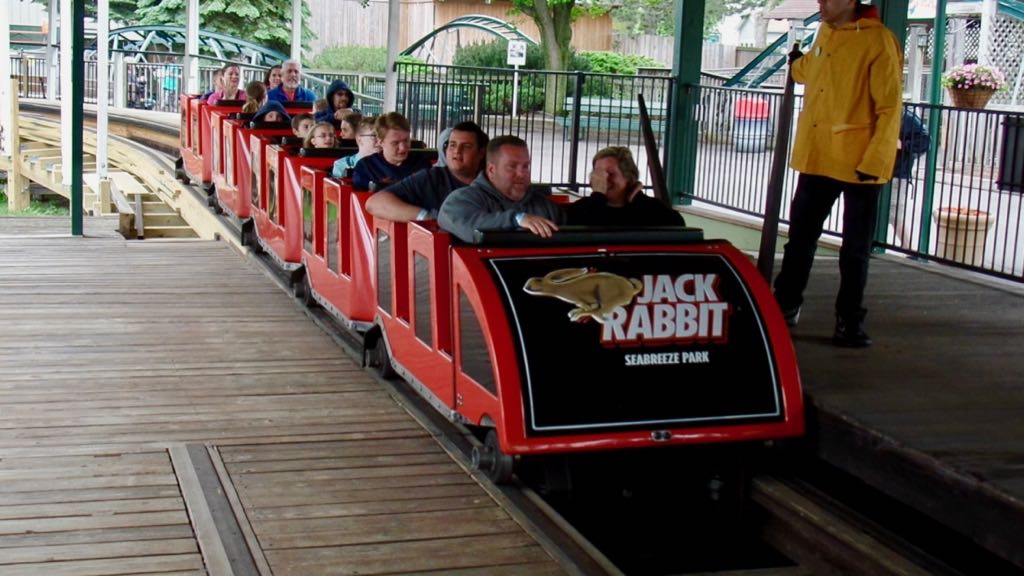 And here's Jack Rabbit returning to the station. Still from a movie showing off the ride operator working the brake levers. 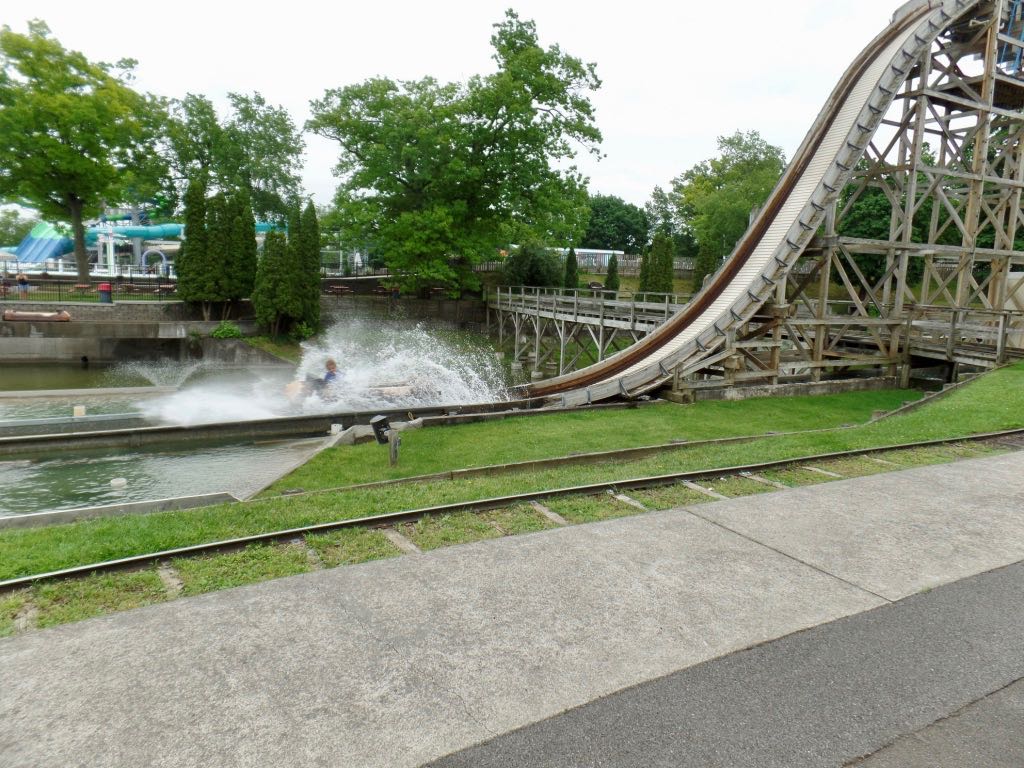 Some madman riding the log flume on a cold and rain-threatening day. Must be a completionist. 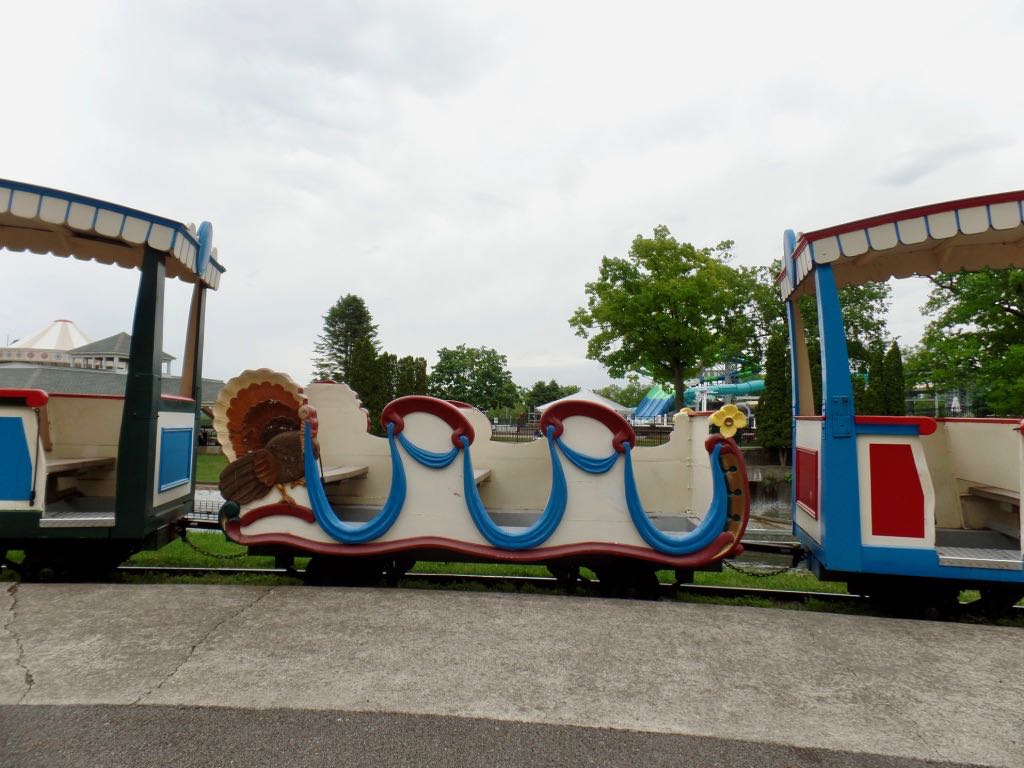 The railroad has this interesting car, with an open top and a turkey on the side. I have no explanation for this phenomenon. 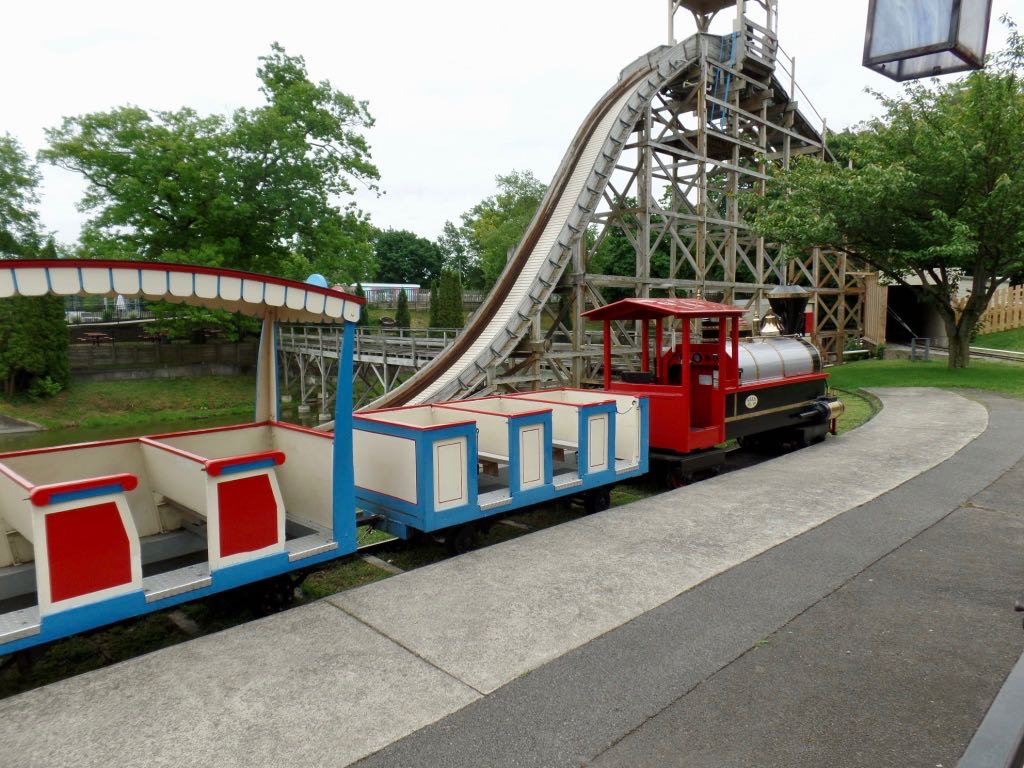 The front of the train. The other open-air car isn't nearly so decorated. 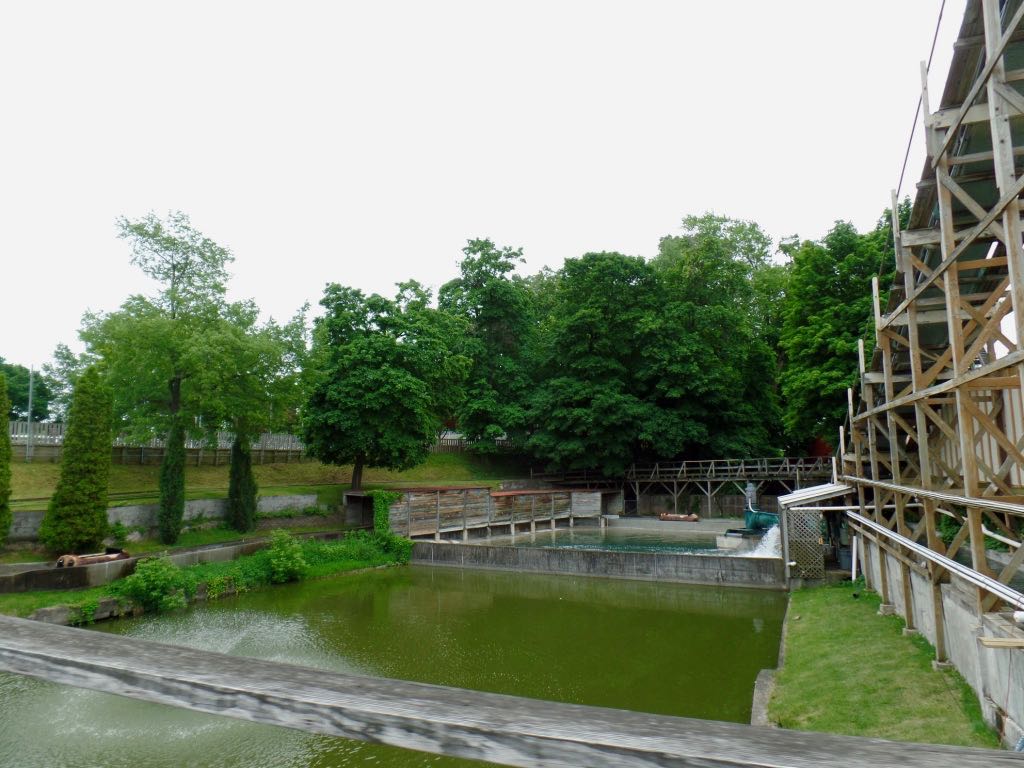 The railroad train goes across the pond; you can see the progression of logs for the flume going along that channel. 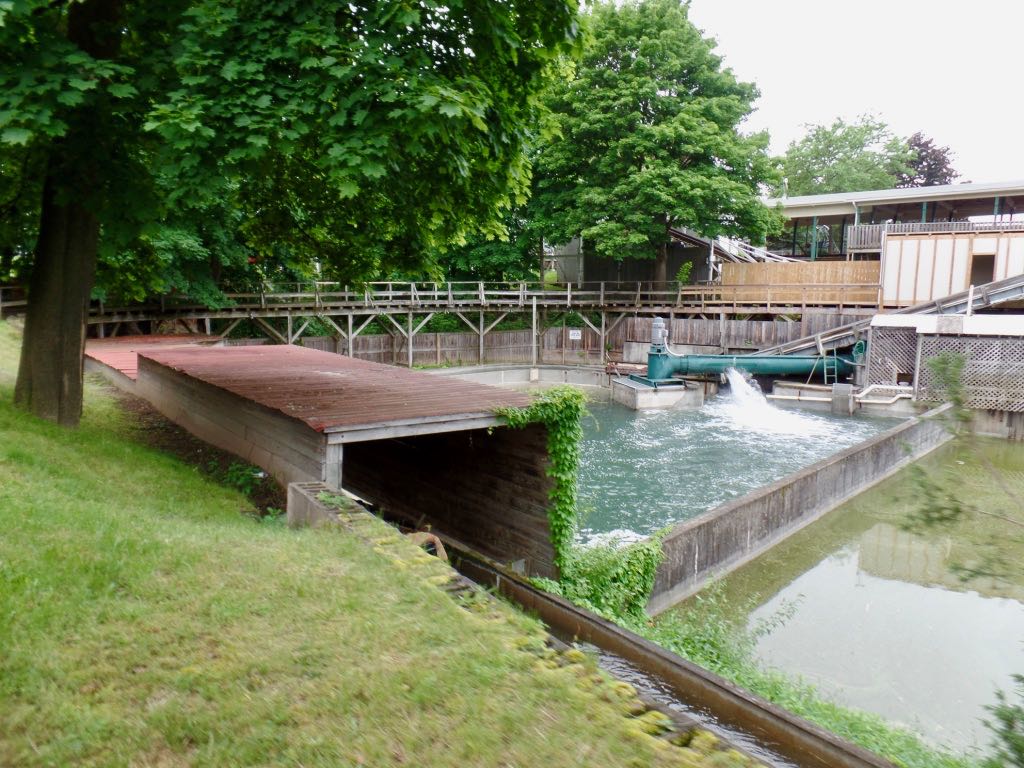 The tunnel for the log flumes (bottom), the track for the railroad (middle), and the lift hill for Jack Rabbit (top). We love a good packed park like this. 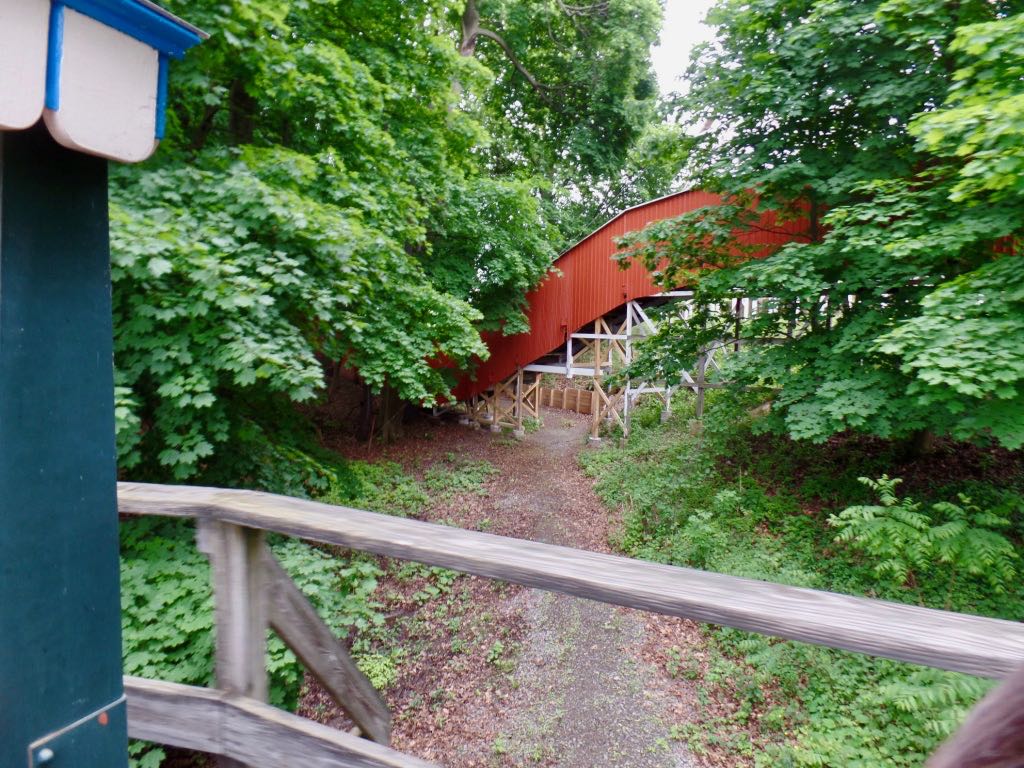 Jack Rabbit has a hill in a tunnel, on the return leg, and here's that tunnel! Nicely painted; it looked new. 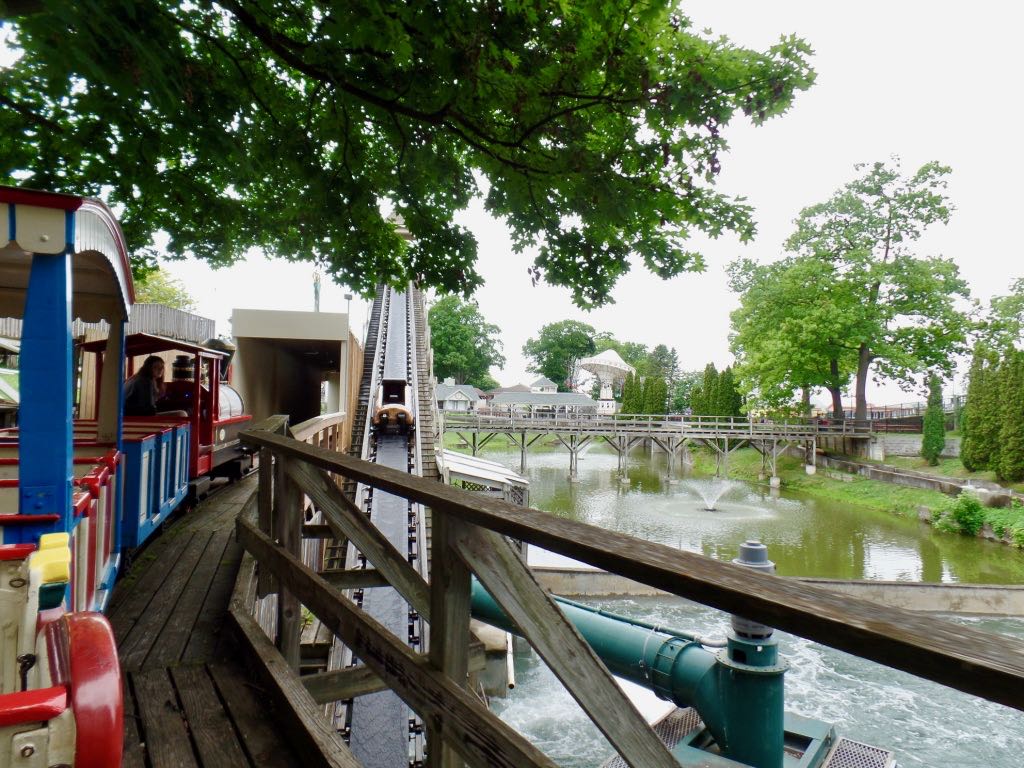 The train running along side the lift hill for the log flume. 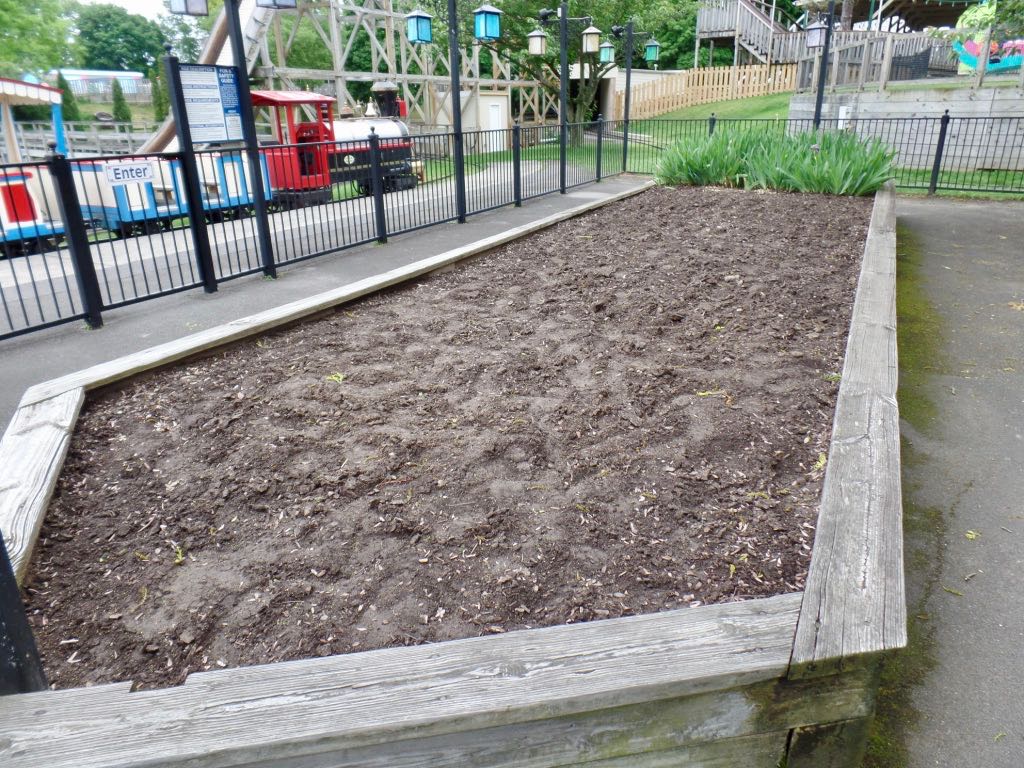 And the end of the train. Here's a flower planter that's almost all potential. 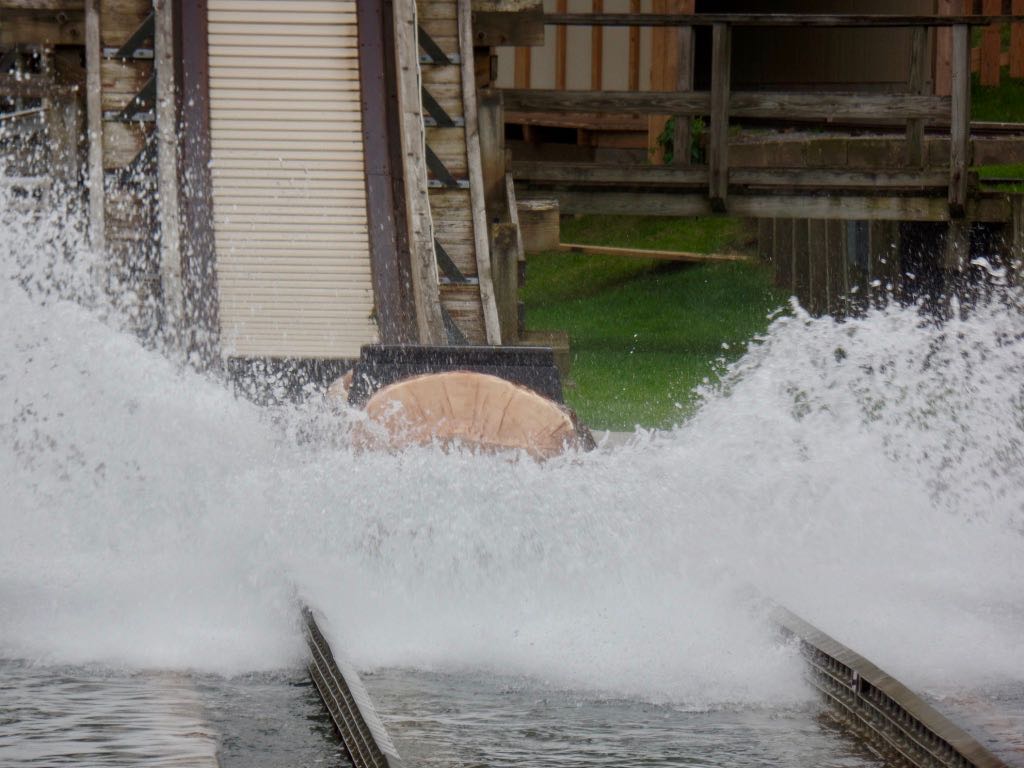 Another, this time empty, log fluming its way down.

Trivia: During the Revolutionary War, Thomas Paine planned a bridge across the Harlem River, which would have connected Manhattan with the mainland. Gouverneur Morris was to finance it. Source: Yankee Science in the Making: Science and Engineering in New England from Colonial Times to the Civil War, Dirk J Struik. (Struik implies but does not quite state that Paine figured this to be an iron bridge.)

Currently Reading: Computers In Spaceflight: The NASA Experience, James E Tomayko. NASA Contractor Report 182505. It's very amusing to see NASA, early on, having no idea how to manage a big software project like the Apollo Guidance Computer. Also that they discovered they could get MIT's Instrumentation Lab under control by making it a threat to MIT's self-esteem. That would never have worked with my alma mater of RPI, because we've never had self-esteem.