Birds are chirping, weather is good

We went to another drive-in! And one we haven't been to before, on US 23 near Flint. This brought us very close to our friend MWS's house, but he wasn't available so we couldn't sit in adjacent cars or anything. Our goal: watching Bill and Ted Face The Music. The gauntlet to get there: they showed it after the R-rated and quite violent Unhinged, because apparently every other movie they could possibly have paired it with was unavailable? Like, I could get deciding not to pair it with either of the first two Bill and Ted movies. But, like, why not Wayne's World, then? Or Airheads? Harold and Kumar? Any other genial-dopey-pair movie?

Also on the bill: light rain that turned into steady rain with a massive lightning storm, which was just lightly immersive as the first scenes in Unhinged took place at night in the rain, and the climactic scenes in Face The Music included a lot of alarming things in the sky.

I'll have more thoughts on Face The Music later. I want to vent some about Unhinged, which is coming to a bad-movies podcast near you. It avoids being offensive by virtue of being too dumb to make the audience think we should take it seriously. But, like, the opening credits is this long spiel explaining the phenomenon of ``road rage'', like this is 1992 and they're a special report for your Fear At Five local newscast. And even tosses in how with the deep cutbacks to police departments and thousands of police layoffs there's no way of handling increasing ``road rage''. So it starts off mis-reading the room so fully that you'd think it was working for the Biden-Harris campaign.

Anyway. Woman having a bad day gives the finger to a guy (Russell Crowe) who doesn't move his truck all the way through a traffic light. He pulls up, scolds her for her incivility and demands an apology. When she doesn't give it, Russell Unhinged decides to Make Her Have A Truly Bad Day. Which, since he had just come from killing his ex-wife and burning down her house, he's ready to do. Unhinged steals her phone, kills a bunch of people including her lawyer/best-friend, and her brother's fiancee. He also kills her brother but a closing tag declares he's fine so, buh? And then it's a bunch of suspense scenes where she has to figure out how to use every scrap of dialogue from earlier in the movie to kill him.

I will say it's an efficient movie. I think literally everything that's mentioned in the movie besides the fiancee clipping coupons comes back at least once. And it's over in like 90 minutes. And every few scenes you get something new to sigh discontentedly about. But, like, at the end when she finally gruesomely kills Unhinged she gives a quip and you know they thought this would be the moment the audience cheered.

And the loathsome end? When this is all over --- we get like three seconds of the cops ``taking her statement'' and send her off from this without, as far as we know, even recommending a grief counselor or anything --- she almost has an accident when somebody runs a red light. She almost honks, and refrains, and her kid says ``good choice''. Because, remember: women and children must never express a feeling, however justified the feeling or slight the expression, lest it provoke a white guy to turn violent. If the movie were smart it might end on that beat with an acknowledgement that this an evil of the world. As it is, it's just, ha ha we learned a little something about shaking it off when someone almost T-bones you at an intersection.

Still, like I say, the movie is efficient and fast and if you make up reasons for the stuff that doesn't make sense it's suspenseful enough. It mostly makes me think I really should get around to seeing Duel someday though.

Anyway this may be my New Jersey upbringing showing, but you have an absolute and unqualified right to give the finger to anybody who's screwing up traffic, and that person has to grimace and accept, yeah, that they deserved it.

Also an observation I made during the film: cars don't catch on fire and explode at the end of every accident the way they used to in the 70s and 80s anymore. Now they just go free-wheeling end-over-end while parts fly off. It's neat to recognize what stunt effects are going to date this era of film and to wonder what their replacement will be.

Oh also after both movies, I learned this drive-in has some demon lurking in the men's room. One of the sinks had a plastic bag duct-taped over it, and the thing was billowed out full as I started washing. And then the sink breathed. Like, the air inside evacuated and the bag fell down over the sink handle. A couple seconds later it billowed out again to full. And a couple seconds after that, the bag deflated again. So I don't know what extradimensional horror is lurking under there and breathing in the men's room sink at the US 23 Drive-In in Flint but I'm not stupid enough to stick around to find out, thank you. I warned

bunny_hugger about this but did not take her over to see it because I do not want our faces ripped off by some tentacled hell-beast THANK YOU. We drove home at 120 mph. 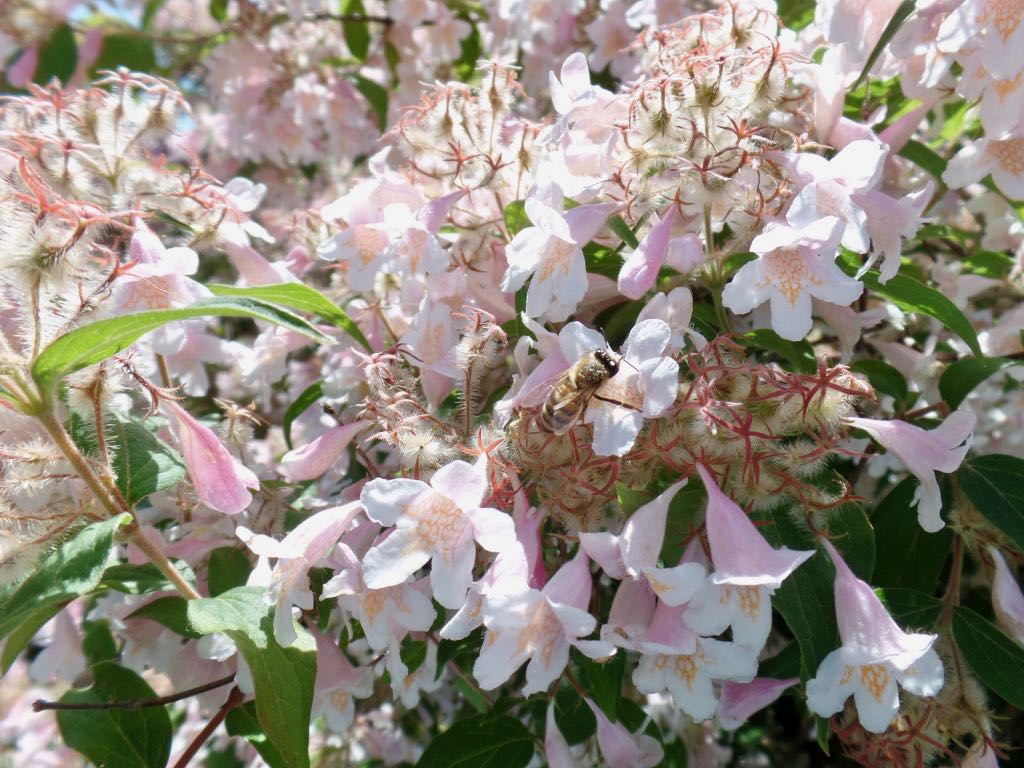 Bees! There's some wonderful bushes lining the queue to Viper and we were just admiring these when we overheard someone complain that the park put in all these plants that attracted bees.

bunny_hugger and I looked aghast at each other after hearing this. 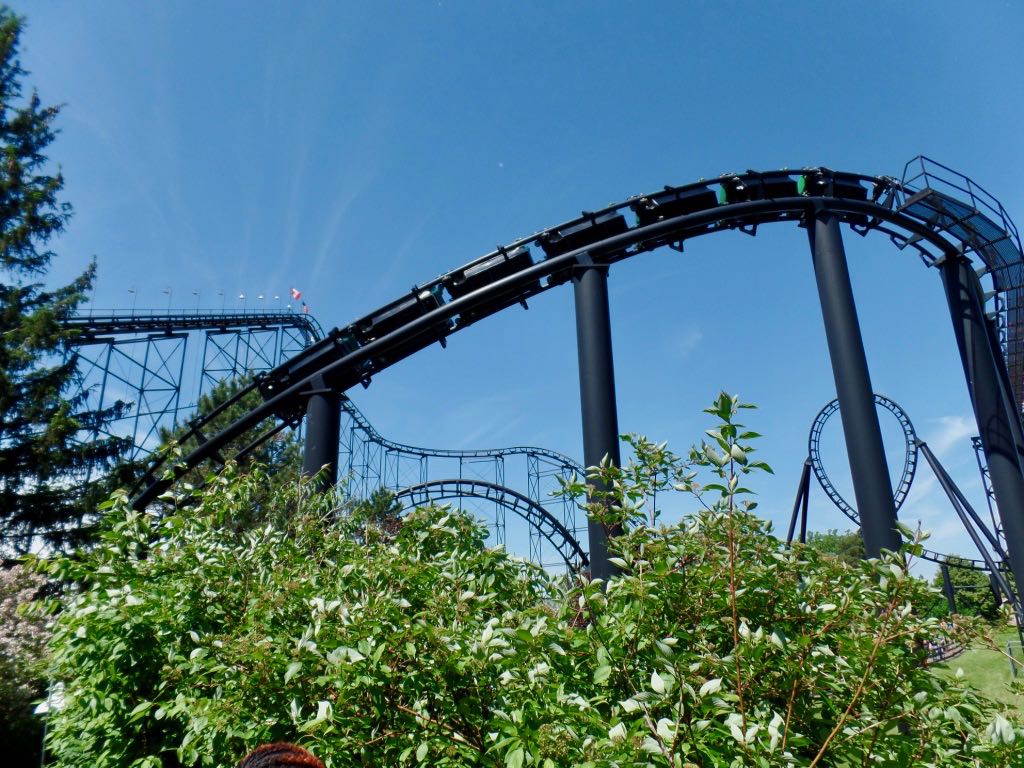 And here's Viper, lift hill on the left and its big loop to the right, with a train just past the brake point. 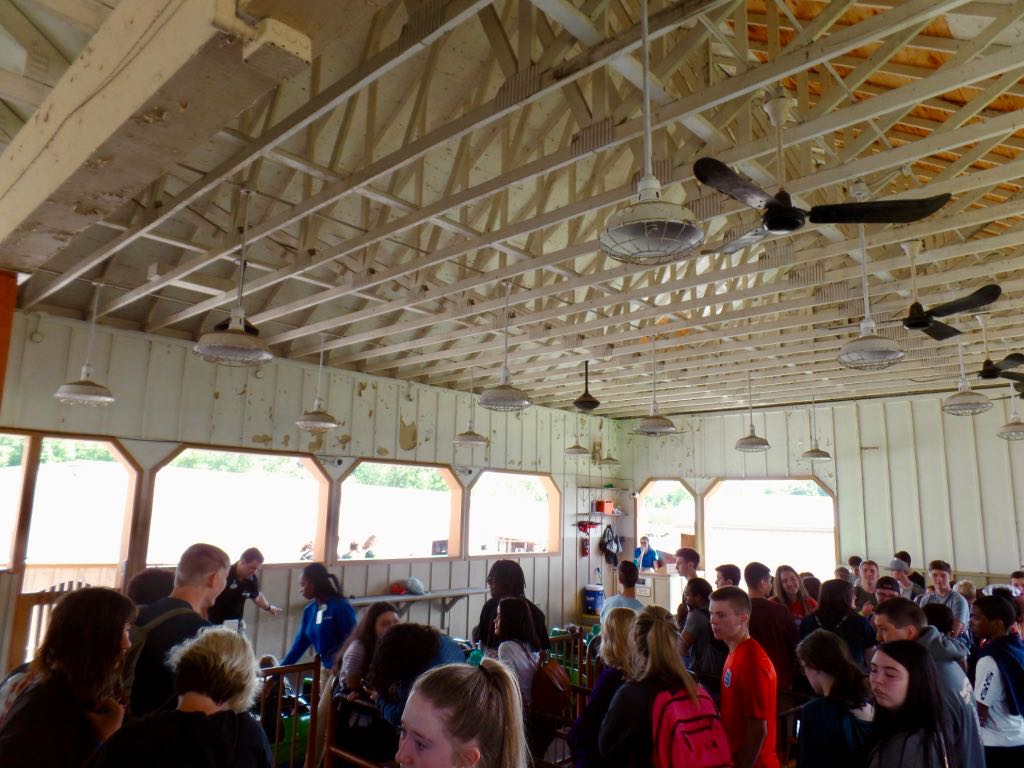 Viper's station is pretty airy, although the paint seems to be a bit old. 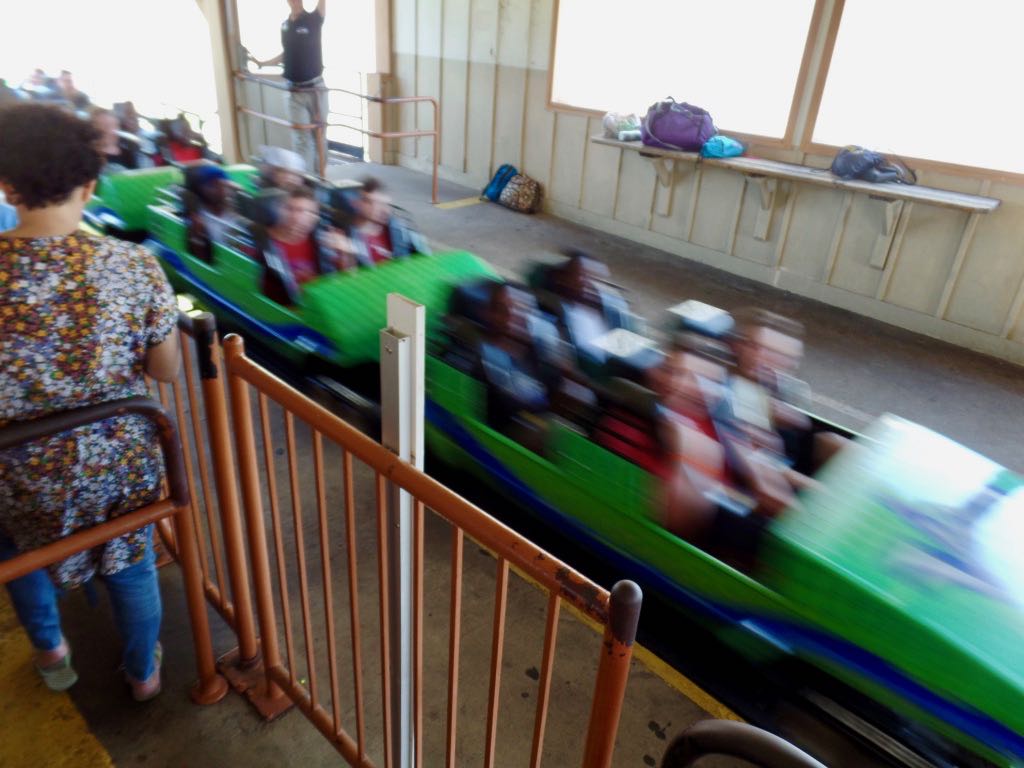 Viper arriving at the station. I think we got to skip ahead in line when they asked if there were any two-rider groups waiting. 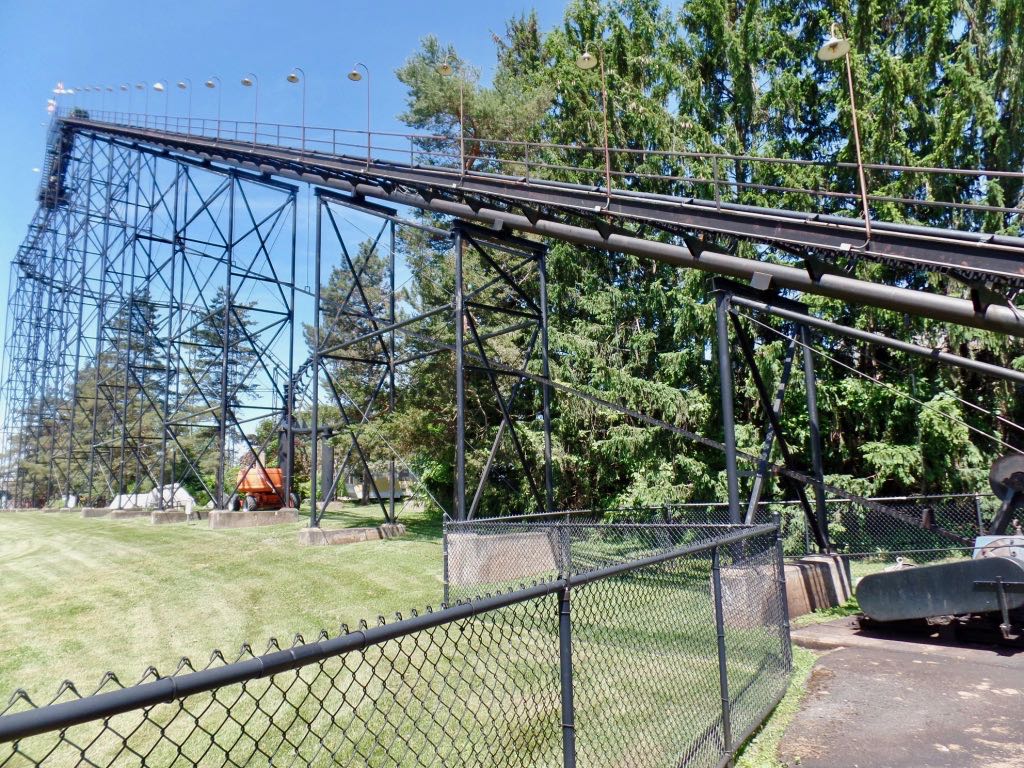 Viper's lift hill seen from the exit, which does wander through some surprisingly empty park space. 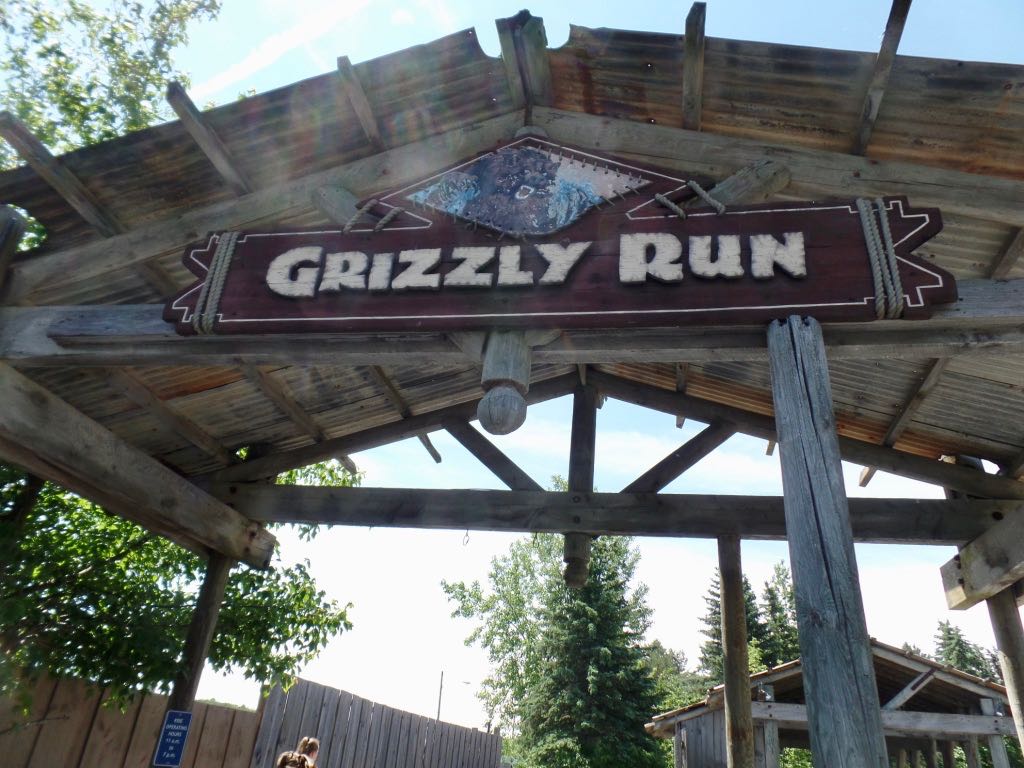 Big sign for Grizzly Run, which we thought was the name for an area of the park. No; that's just the log flume's name. The area? 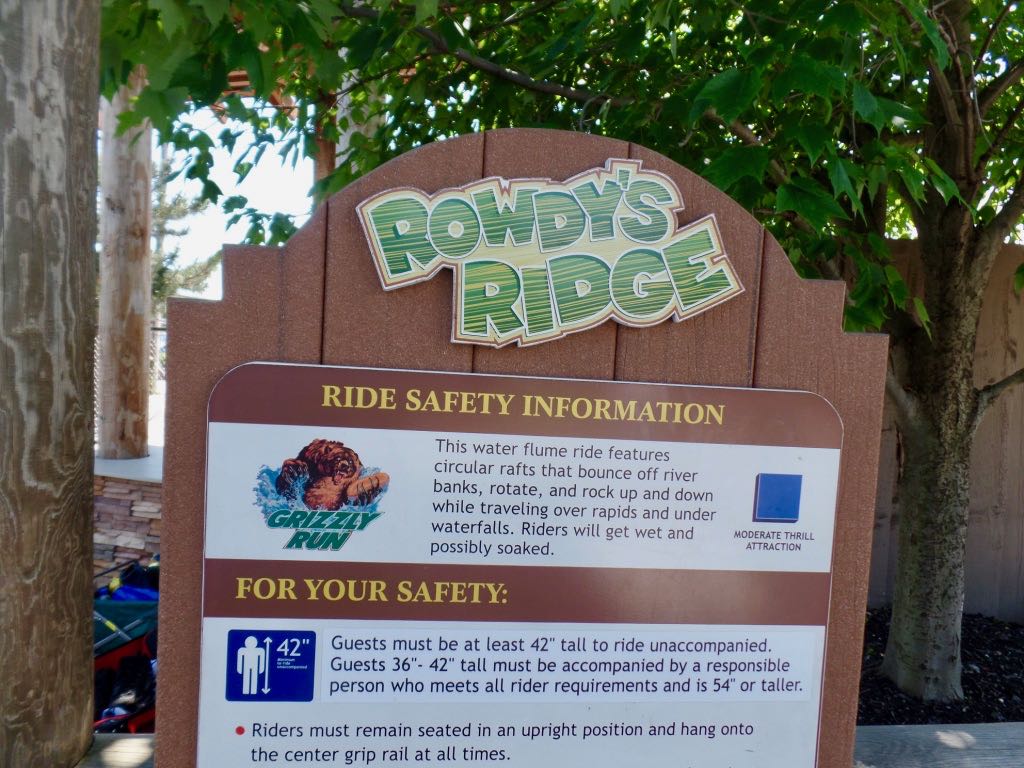 The area's called Rowdy's Ridge, and I like these ride safety signs for giving you both the area and the ride name. Also a pretty good view of the ride logo. 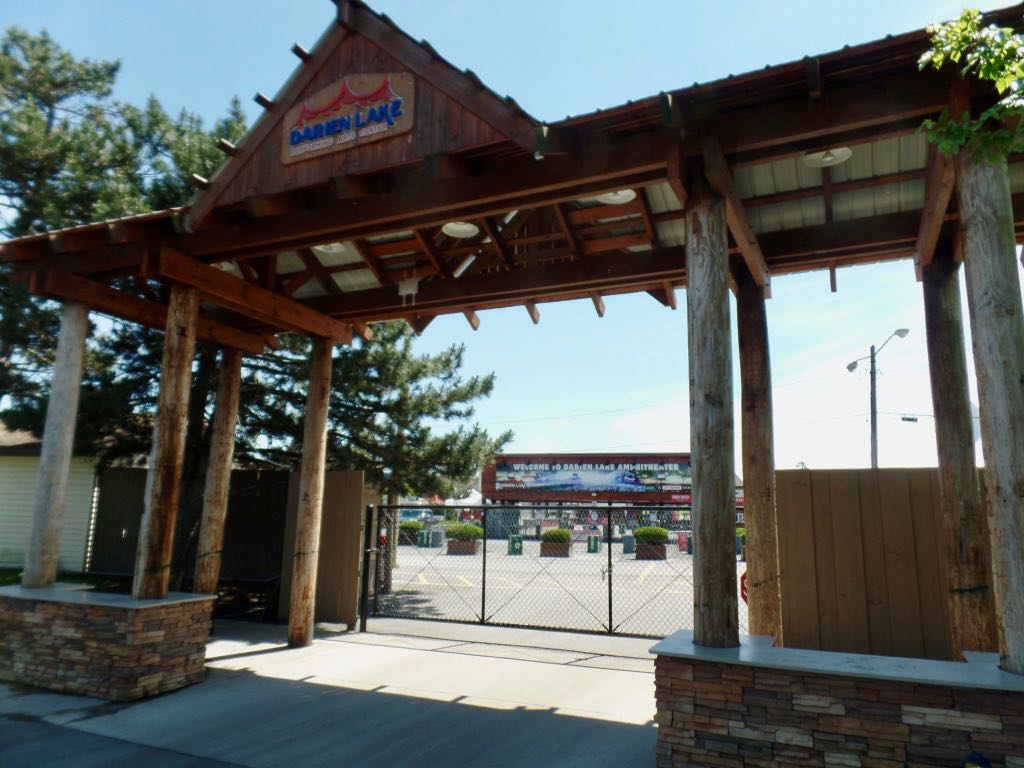 Darien Lake amusement park is adjacent to, and somewhat grown together with, the Darien Lake Performing Arts Center. Here's the gate that separates the two. There's also a campground that abuts both. 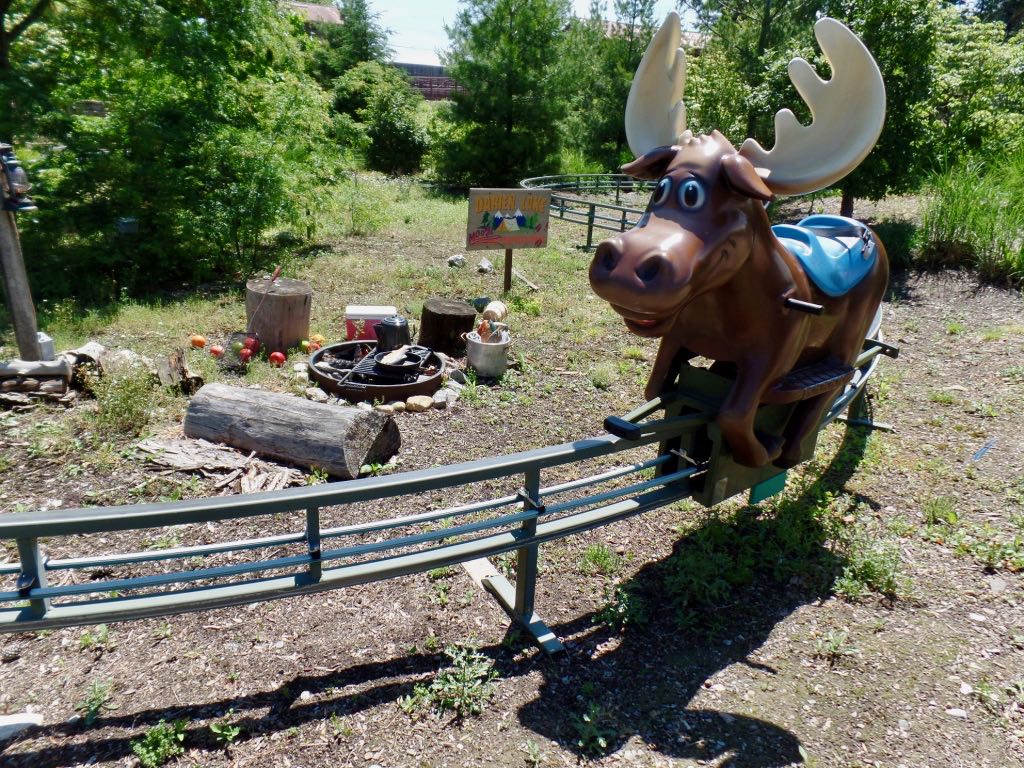 Moose! Moose! Moose on the loose! A surprisingly fun ride here. The mount goes along the track, rocking up and down, while a prerecorded audio tells you about the things you're passing, like this ``campground'', and tells corny jokes. The ride op talked about it as the best ride in the park and it is, certainly, the one we remember most fondly. We rode one like it, but serious and medieval-knight-themed, at Festyland in France and it's surprising that the ride doesn't have more installations that we can see. 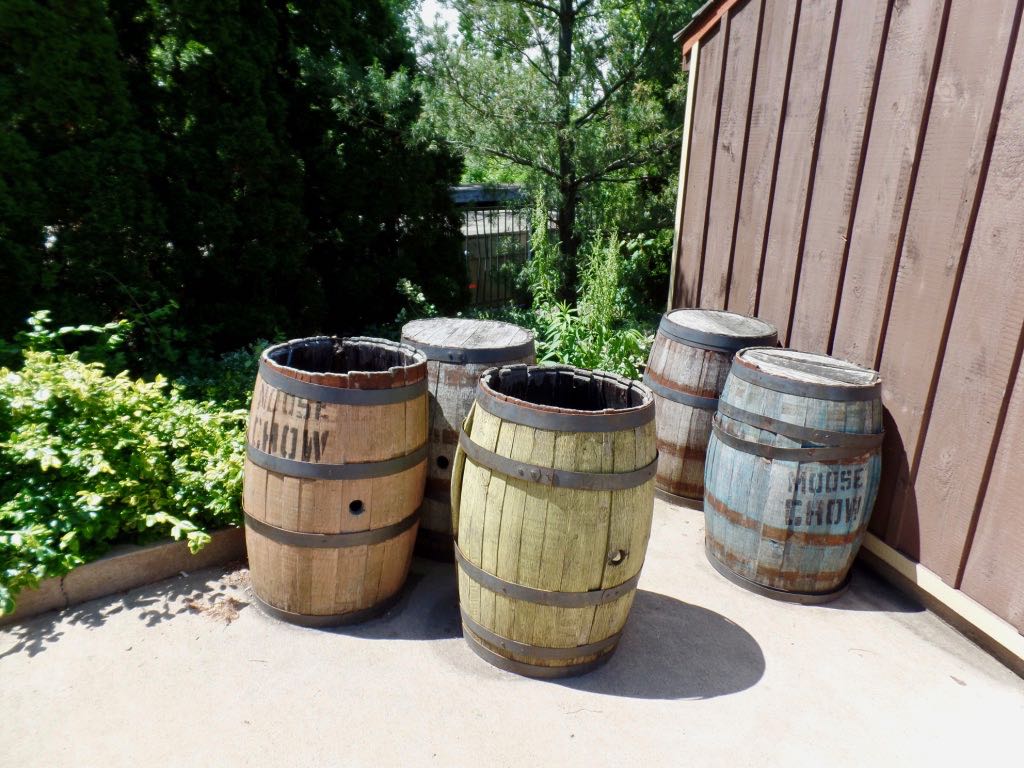 Props outside Moose On The Loose. It's the kind of ride where they talk about the chow. 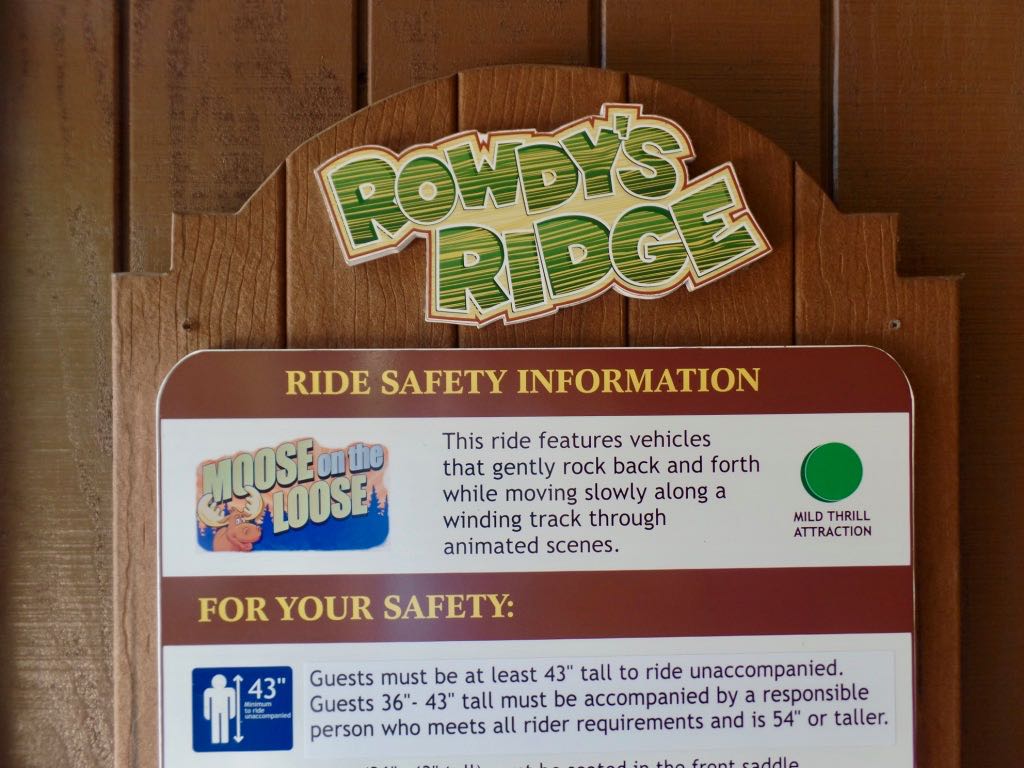 Moose On The Loose's logo and a pretty good description of what you get from the ride. 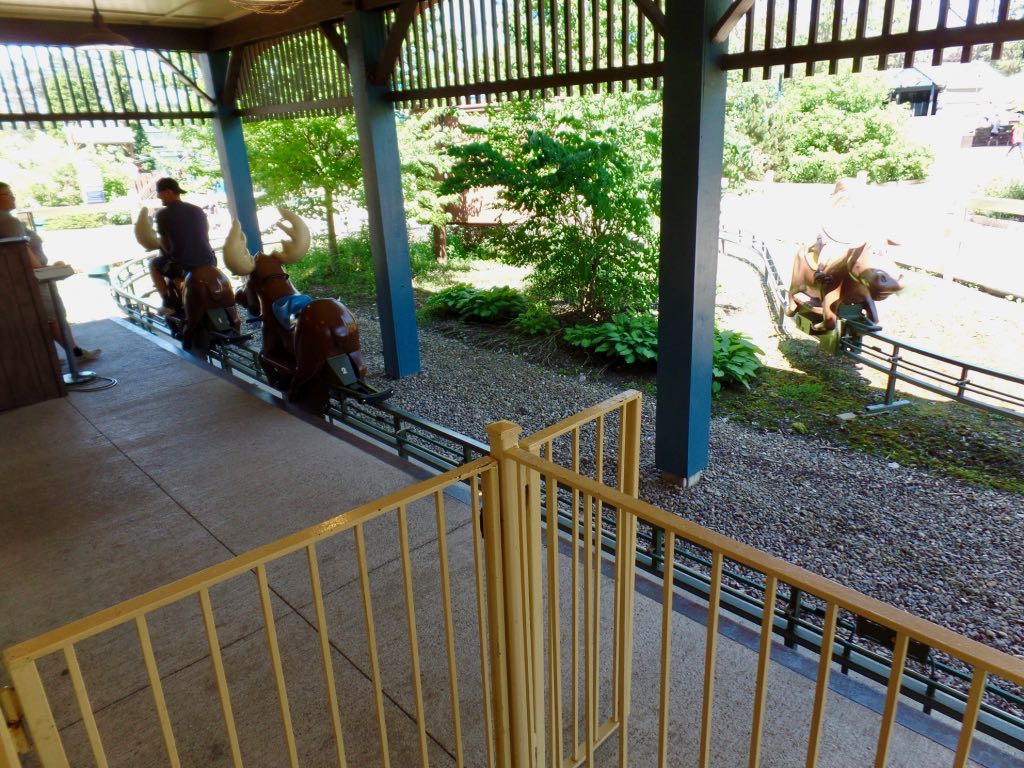 Loading station. The ride op insists on you putting your thumbs to your temples to make moose antlers before setting off. And was happy talking to us about other parks;

bunny_hugger had her Six Flags over Texas t-shirt on so the ride op knew exactly what sort of people we were.

Trivia: The Soviet Union went through seven military Chiefs-of-Operations between June and December 1942. Source: Why The Allies Won, Richard Overy.