Round and round like a horse on the carousel, we go

Near the start of summer we took the flowerbox off the front of the house, before it could fall off. We figured it was worth repainting the part of the house covered by that --- which had not been painted with the rest of the house --- before putting it back up. Plus the brackets we needed were on backorder. It turns out our metal window box was something like seventy pounds of metal, empty, and we needed even more brackets than we first realized. But between early-summer heat and

bunny_hugger's chronotherapy, which had her trying to sleep through so many daylight hours, it wasn't worth doing anything about.

Now, though? There's really no excuse, and so we finally got started working on this. The first step is scraping down the old paint and that is going ... rrrf. Big enough chunks of the old paint can be coaxed off with razor, scraper, and sander to make it feel like the rest should go, and it doesn't really want to. Today I tried getting the hair dryer --- we don't have a proper heat gun --- and that helped at least one patch. Then the skies darkened and the air cooled and I got everything hurriedly packed inside just in time for the first drops of rain. Also the last drops, since the storm just grazed us and we got literally seconds of rainstorm.

At some point I will give up on scraping all the paint off down to bare wood, although there is a good bit of bare wood exposed. After all what's important is that the paint not come off too readily, and if it's resisting all this assault it's probably on pretty good. And, of course, will be covered by flowerbox for years to come, too. I'm thinking maybe tomorrow to declare the wood prepped and then we can look into primer and real paint.

For our last full day of the June 2019 trip we didn't go to any amusement park. We did go to some amusement-park-adjacent stuff, though, one of which was extremely us. Want to see? Look along ... 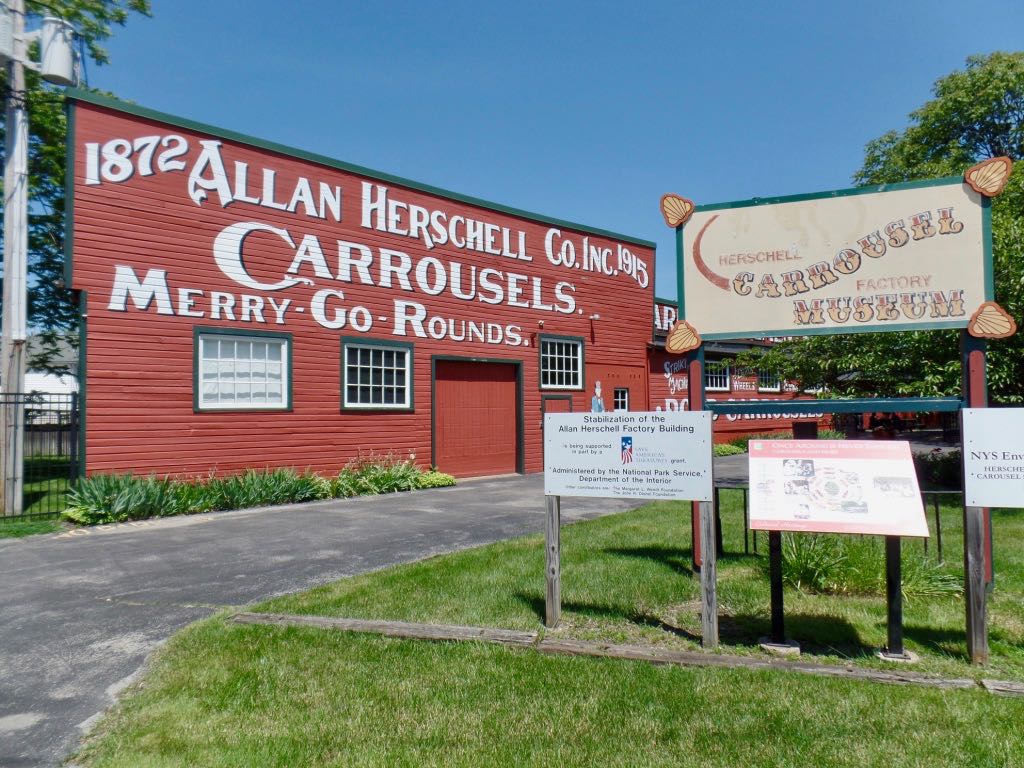 The entrance to the Allan Herschell carousel factory museum. It is the spot that housed the Herschell factory, a century ago, though it's a long time since it was a working factory. Note they were going with a two-R spelling of carousel. The Seaway Trail poster explaining the site, with a history of the factory. We didn't see other things from the scenery trail, but this does at least give you a clear idea why you might want to visit the place. More of the side of the factory, with some of the wares that used to be on offer. 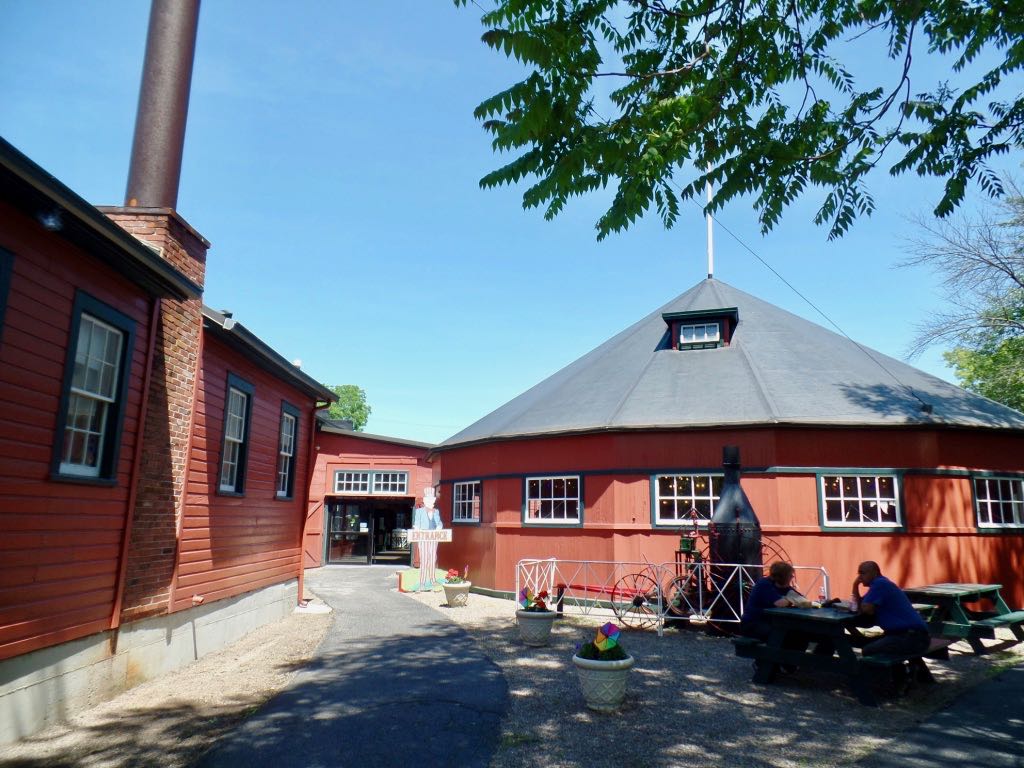 And here finally is the entrance. The carousel test building is on the right. 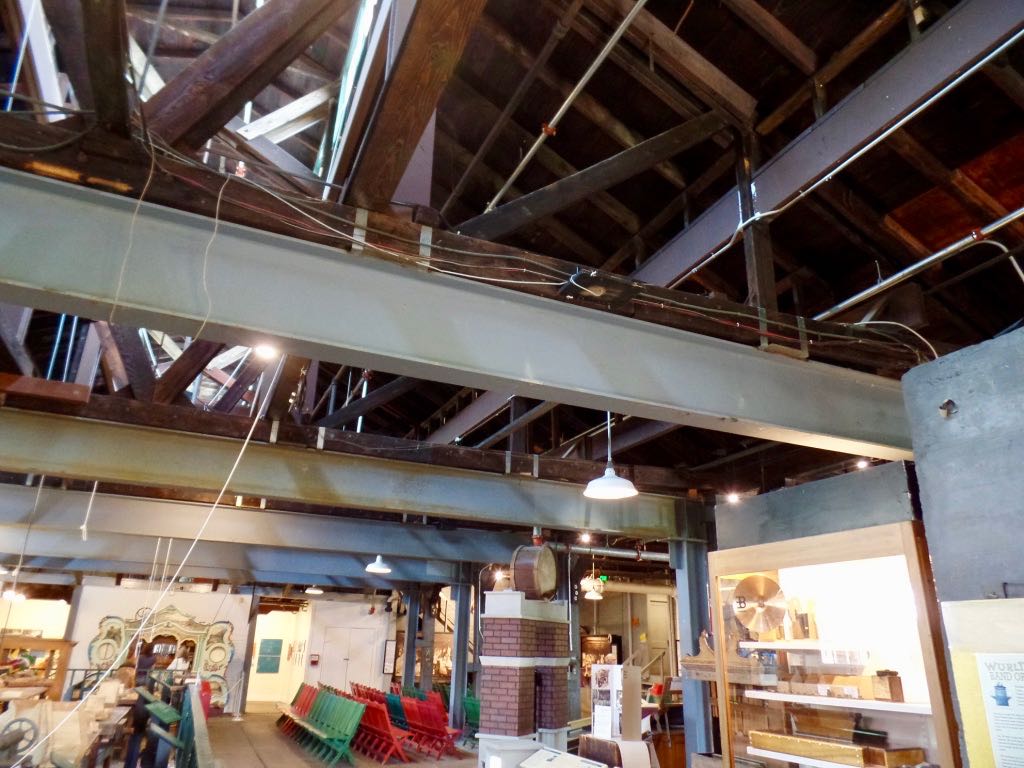 Looking up into the rafters of the main carving room. 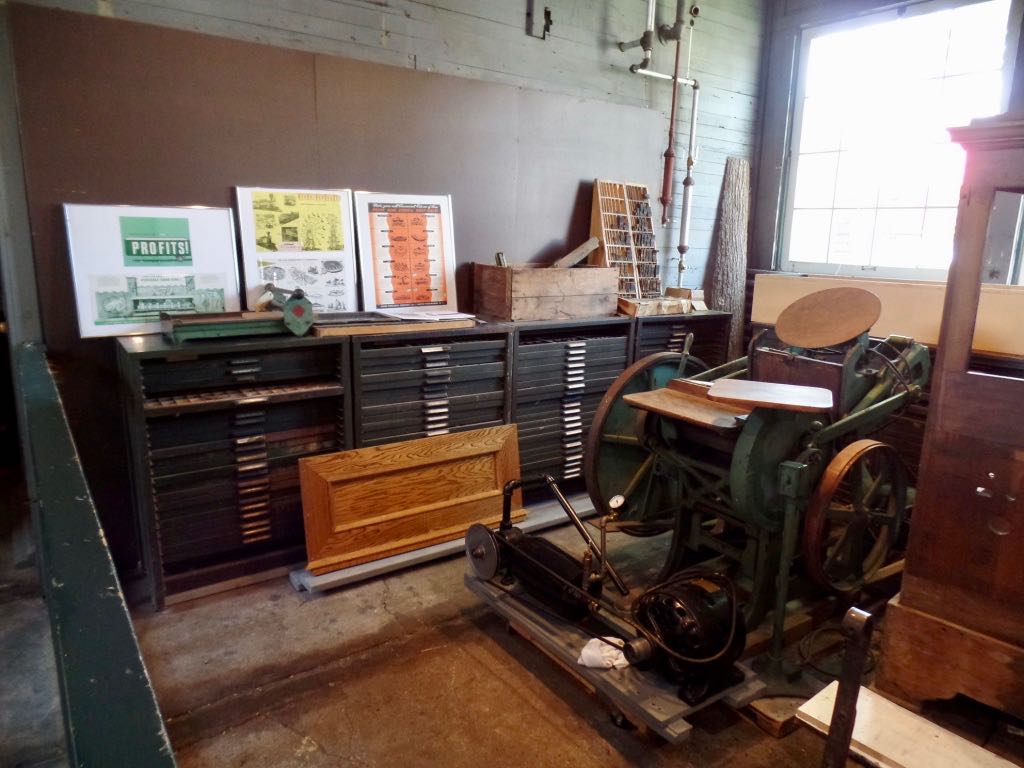 Carving equipment, none of which was original to the factory, but which was representative of what they'd use when carousel horses were carved here. 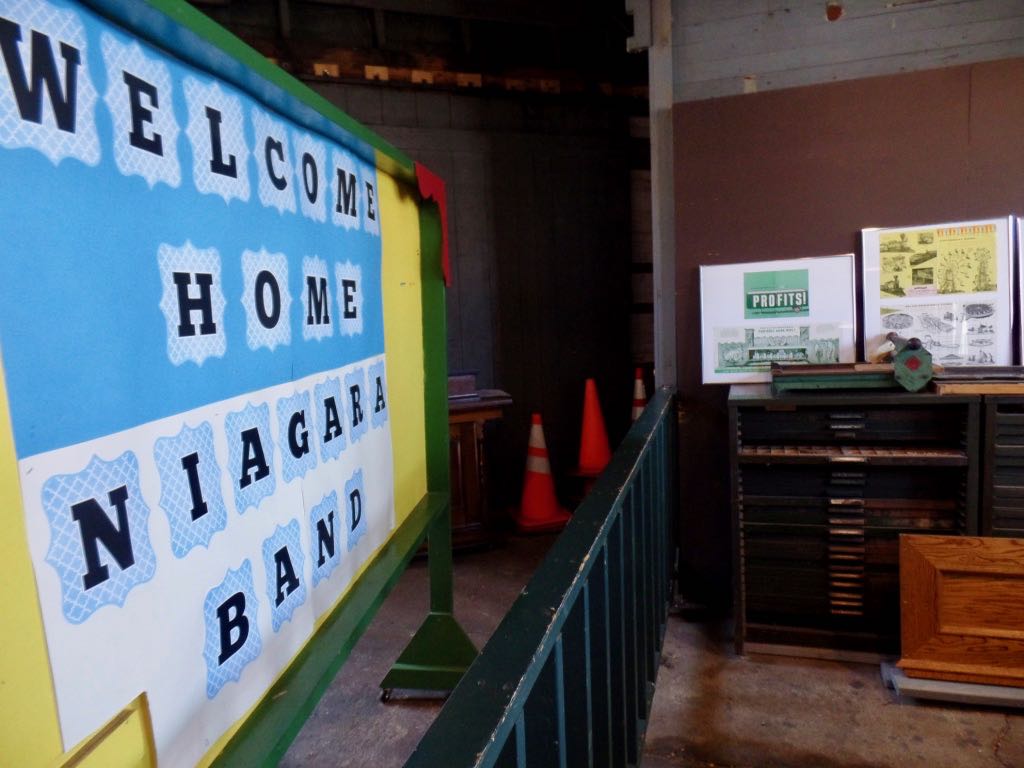 The welcoming home of the Niagara Band, on a sign facing away from the general public, is one of many things I didn't understand. 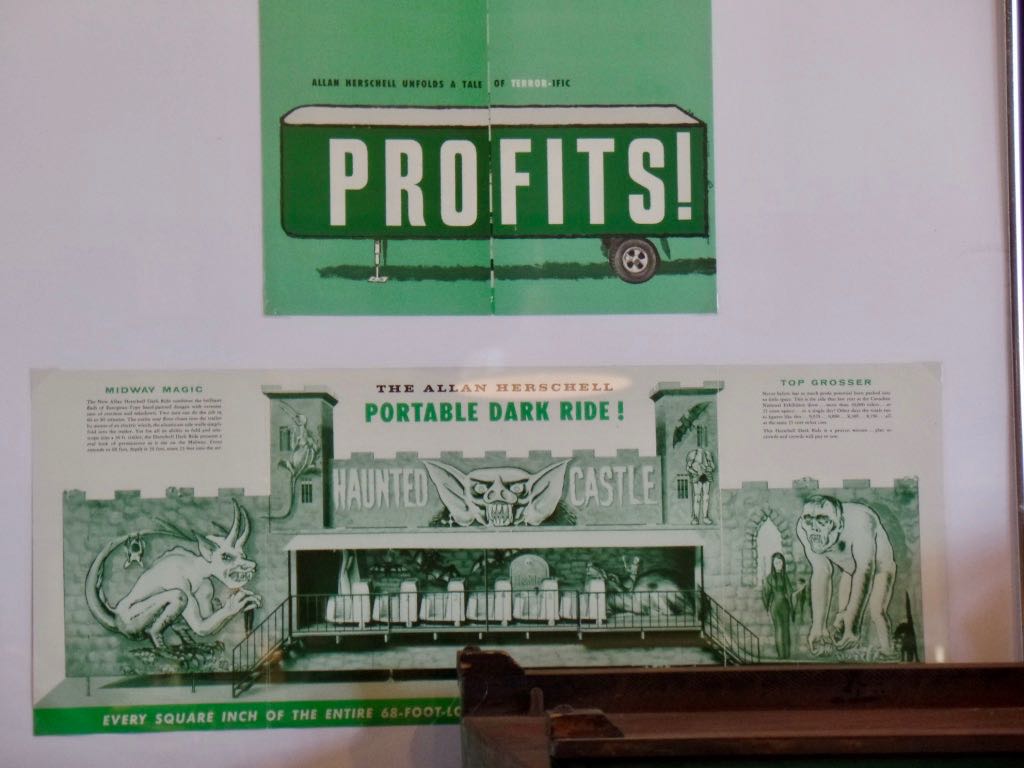 Allan Herschell Portable Dark Ride flyer, showing the basic facade for a portable dark ride and the promise that this will make money. 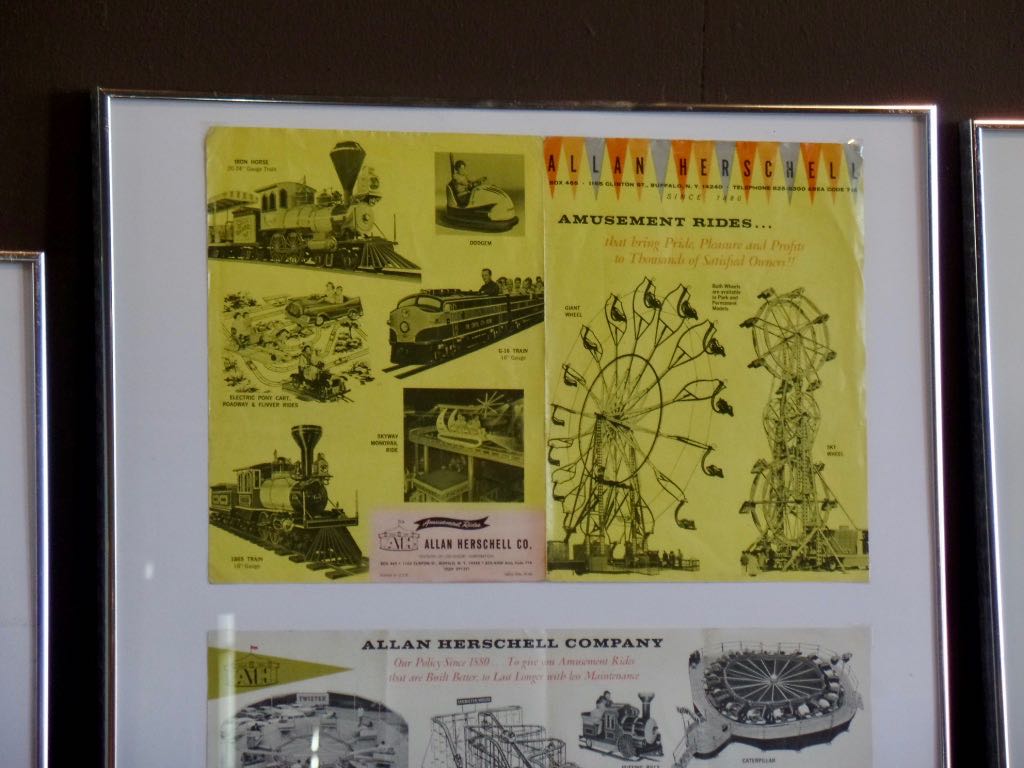 More advertising material; this looks like the covers of a catalogue to me. 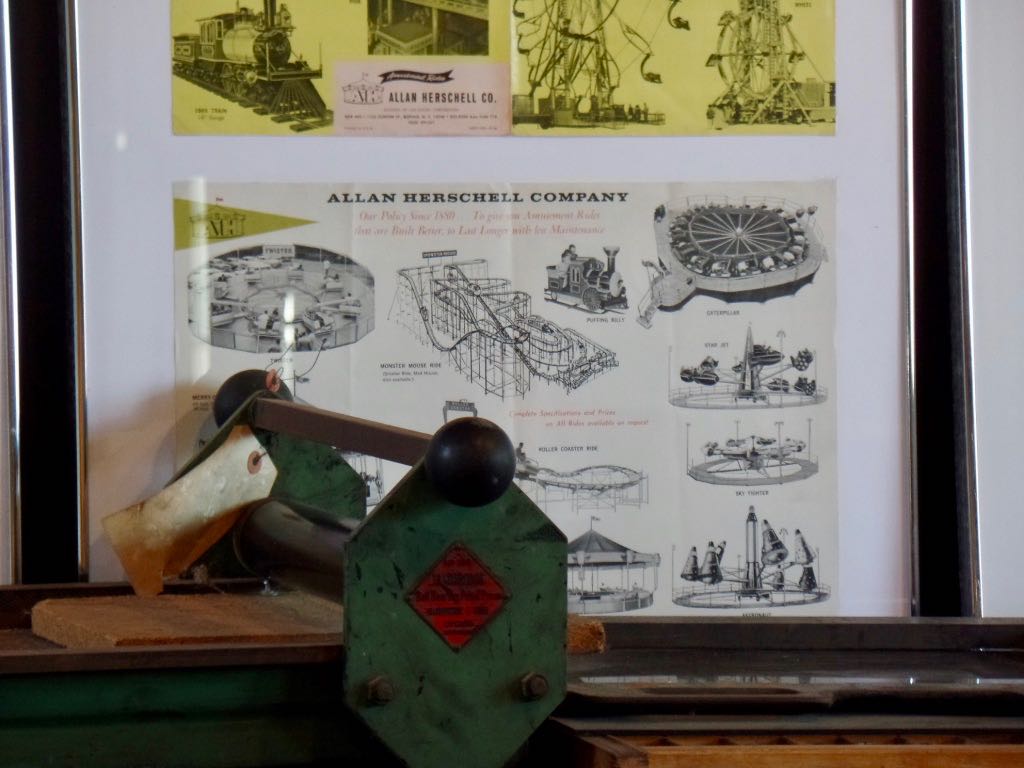 And more rides! The roller coaster's billed as a Monster Mouse. I'm fascinated to see a Caterpillar, almost extinct nowadays, offered at what has to be the early 60s based on the Mercury Capsule-like ride in the lower right corner. 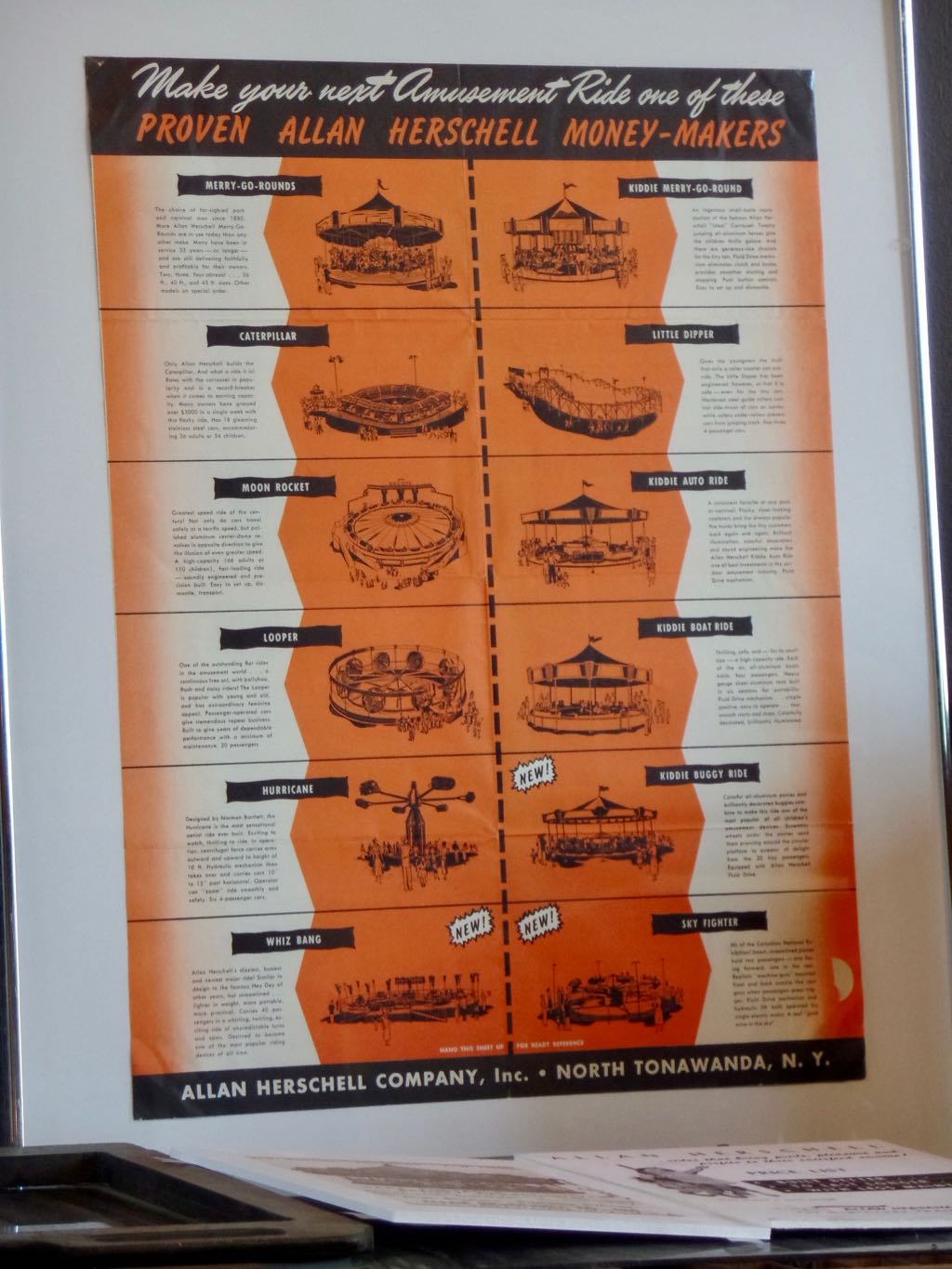 Another poster offering sure money-maker rides. The Little Dipper, second row right, is their kiddie coaster that they offered from like 1950 on. Looper, fourth row left, is all but extinct now; the one at Knoebels is the only instance I know of that still exists. I can't date this but the typesetting looks to me late-50s/early-60s. 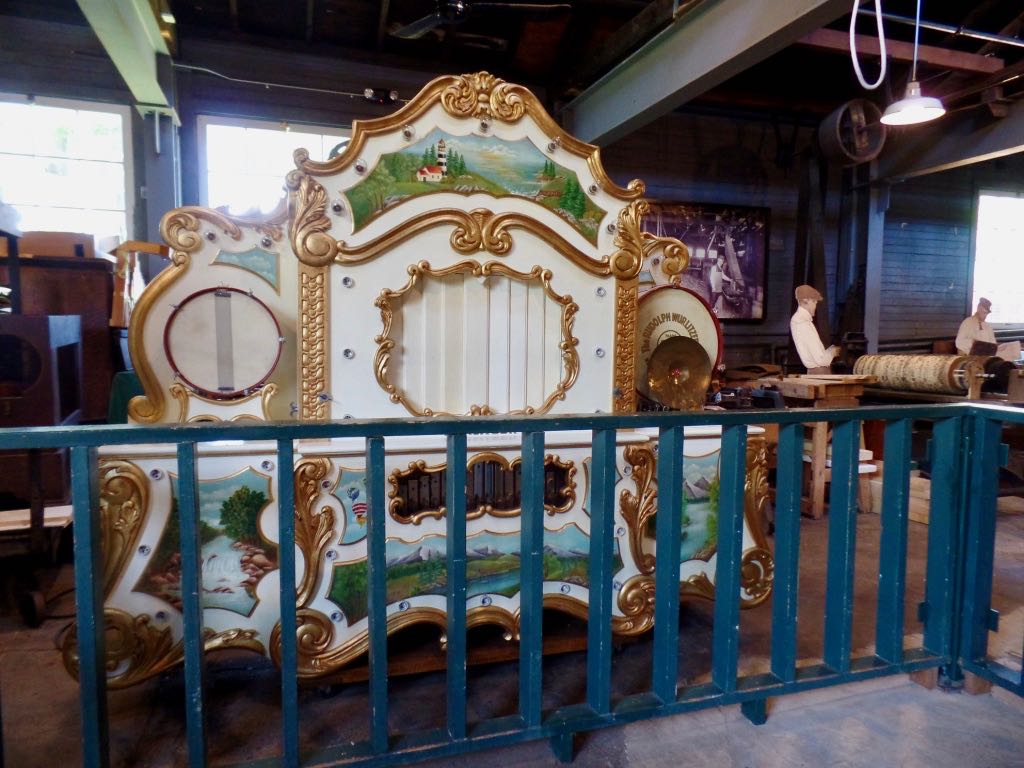 And a band organ. We had not before this visit appreciated the ties between the Allan Herschell company and the Wurlitzer band organ company. We would learn!

Currently Reading: Enchanted Rendezvous: John C Houbolt and the Genesis of the Lunar-Orbit Rendezvous Concept, James R Hansen. So this actually reprints Houbolt's famous ``voice in the wilderness'' memorandum pleading for NASA to study Lunar Orbit Rendezvous seriously and I have to say, uh, you can see why in the memo he takes pains to insist he is not a crank, which does not by itself convince.