Feel like I'm glued on tight to this carousel

So what we did do Labor Day was ... we wanted to go to the beach. But Lake Michigan's two hours away and if the beach turned out to be crowded --- and we've got a low tolerance for crowded these days --- we'd have sunk four hours into doing nothing much. The alternative? Go to Lake Lansing Park, which is not in Lansing but is like 15 minutes away and have a picnic there. That too would risk a crowd, but if it was crowded, we could bail out and go somewhere else, or come home, and not have lost much at all.

And this was a good plan. There was a fair crowd at the park, but not a capacity one, and not one too packed for safety. We set up our beach chairs on the lawn and wondered at the sawhorses with the warning signs, ``No Glass Ball, or Frisbee Playing Past This Point''. Even granting the missing comma, the parallel construction there is messed up. Also it implies sometimes there's times glass is fine closer to the beach, or only OK farther away from the sand?

We spent the whole afternoon into evening there, having the curried fake-tuna sandwiches that

bunny_hugger had made the night before. And doing some walking around, exploring ... the thing is the park used to be Lansing's city amusement park. It closed in 1973. The carousel building is still there, used for ... office and maybe storage stuff. The carousel itself moved, first to Cedar Point and then to Dorney Park. There used to be a roller coaster there, location unknown to us. We've never seen, like, a park map or a other guide to what was where, other than the carousel.

bunny_hugger observed the track for a kids' trike ride is just .. too much for a county park. It's this paved shape, with its heart a figure-eight loop that rises on a hill so it goes over itself, and has a modest tunnel. And there's a bench beside it that just looks exactly like the queue area for a Turnpike Cars ride. Could it be a remnant of the park?

One last piece. The concession stand had a set of posters, with information that they'd been able to find about what was in the park and when. Among the rides added to Lake Lansing Amusement Park in 1958: the Turnpike, Flying Scooter, Pretzel, Tilt-a-Whirl, Kiddie Boats and Auto Rides, and Atomic Bomber. Now ... we could find it plausible that a piece of the amusement park still lives. (More on this to come.)

We stayed until sunset, and a bit longer. It got chilly, although the thermometer said it was still 68 degrees Fahrenheit. I had only shorts on, though, and forgot to bring a hoodie.

bunny_hugger had her light, Darien Lake, hoodie, but that was also a bit light. It was a good time to go home.

There's not any good reason for us not going to Lake Lansing Park more than we do. It's nearby, and easy to get to, and sometime it might even be warm enough to want to swim or something. And, now, we have our own curious bits of archeology to do.

And now let's look back at the Allan Herschell Factory Museum, with some more descriptions of rides and the appearance of working stuff. 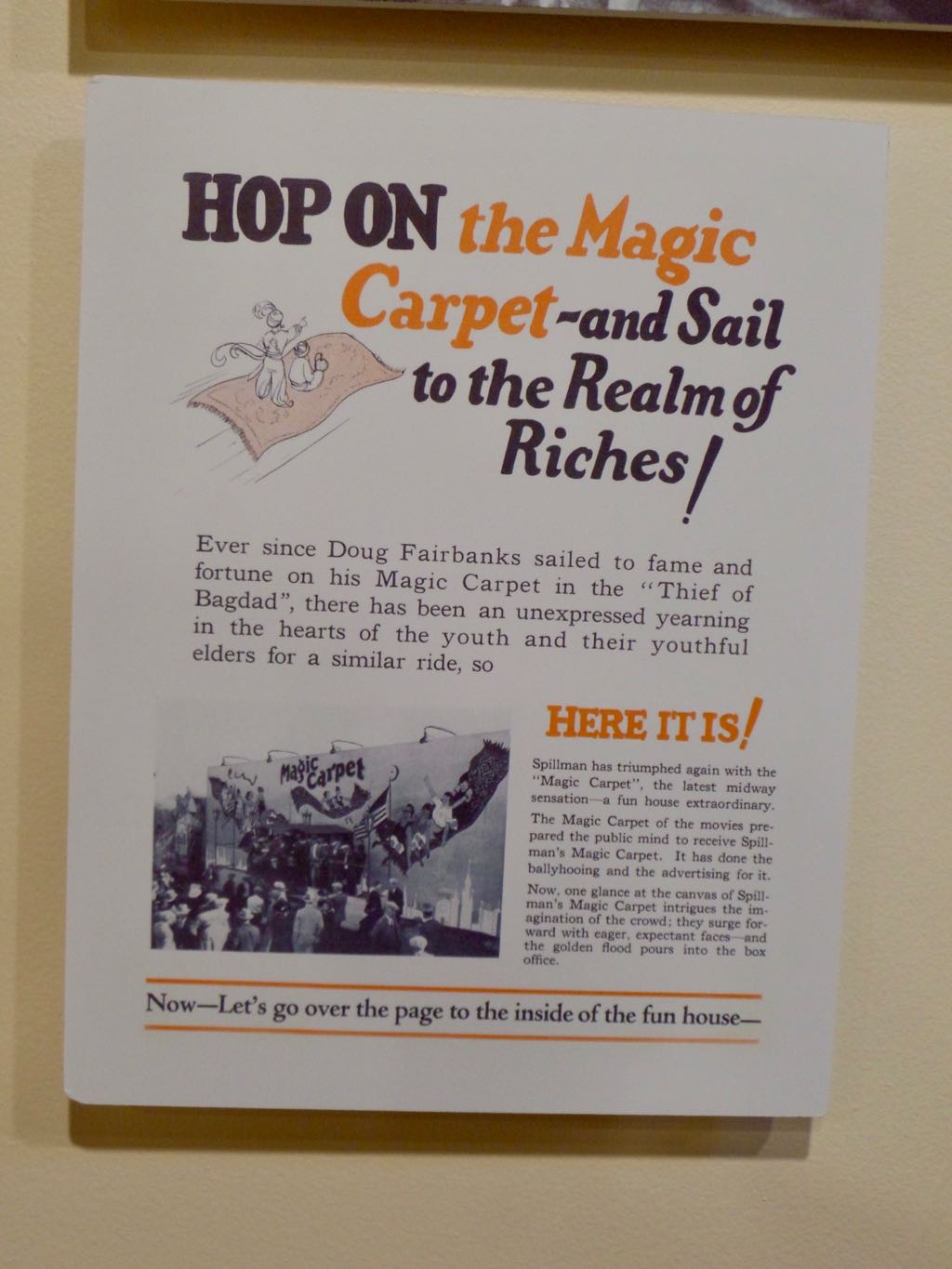 I have no idea what to think the Magic Carpet here might remotely have been. Unfortunately they don't show the interior pages of this brochure and the flat ride sites I know don't go back to 1920s rides. 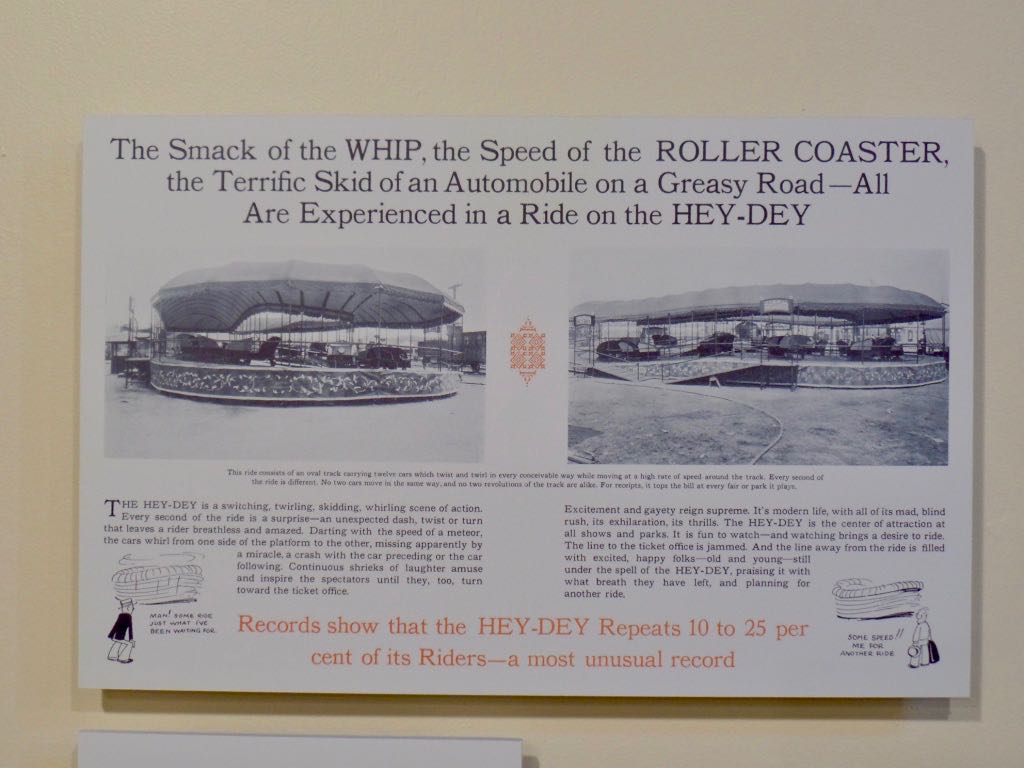 The Hey-Dey has a great name and we saw one mentioned in those old Seabreeze advertisements. It promises that ``excitement and gayety reign supreme'' and this repeat rate of 10 to 25 percent sounds like a lot, but also a bit of a range? 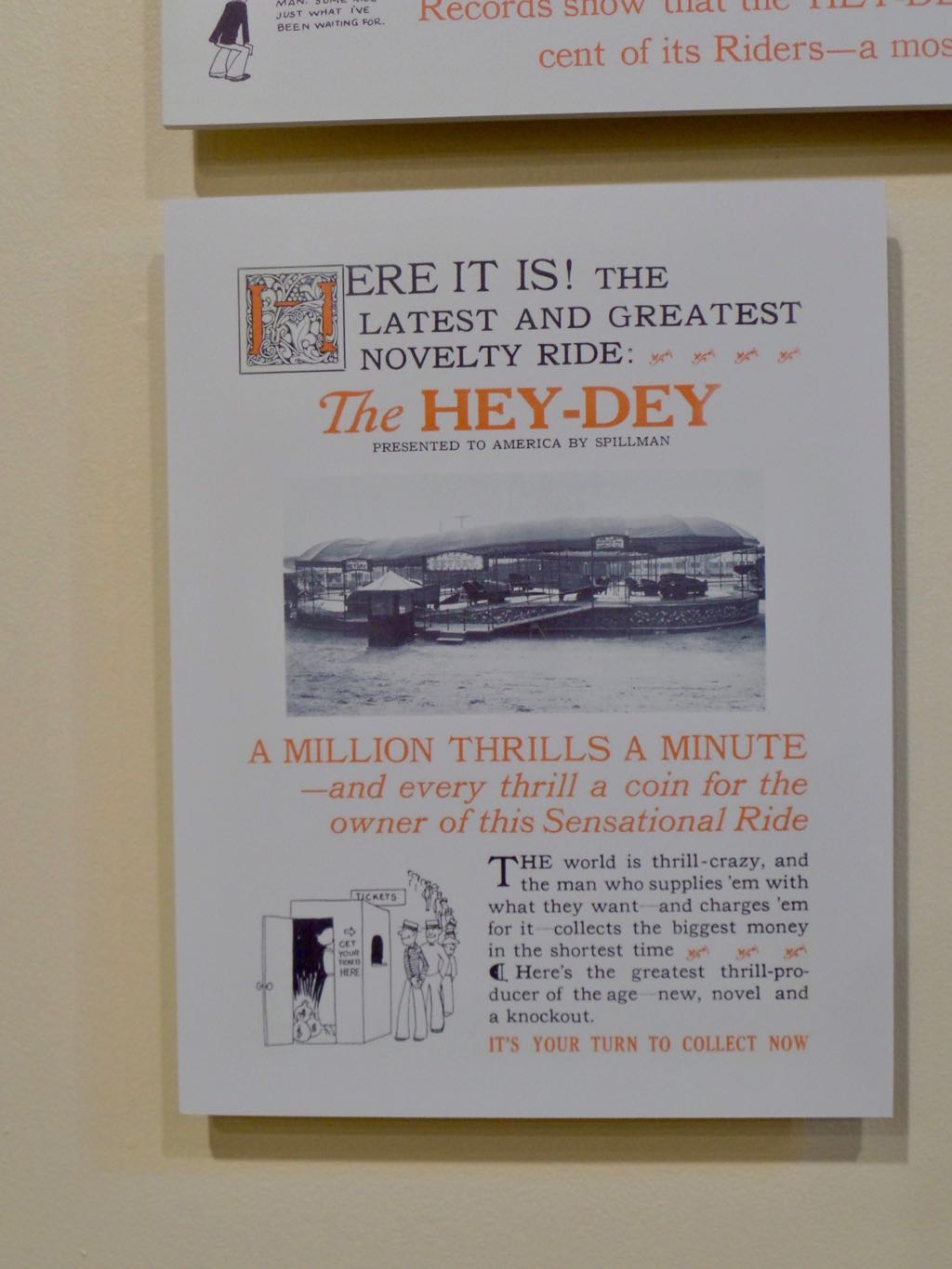 But the pictures don't give a lot of direction about what the ride just was. I think it seems to be something like a Tilt-a-Whirl? This is why we need a Roller Coaster Tycoon: Turtles in Time edition. There's so many amusement park rides of a century ago we just don't imagine anymore. 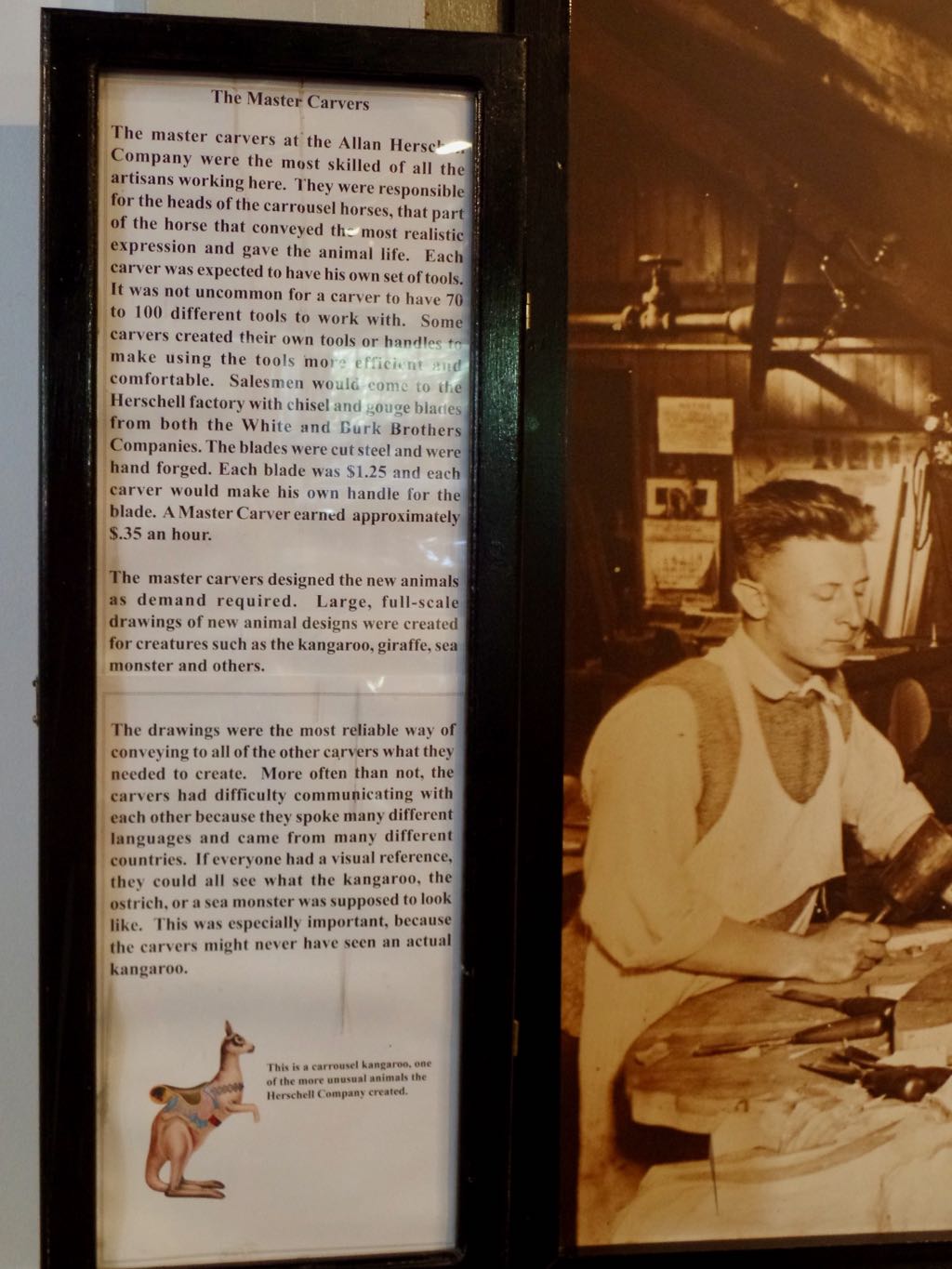 Sign at the museum that explains The Master Carvers, part of a series explaining the relative positions and roles of people carving horses in the Golden Age of Carousels. 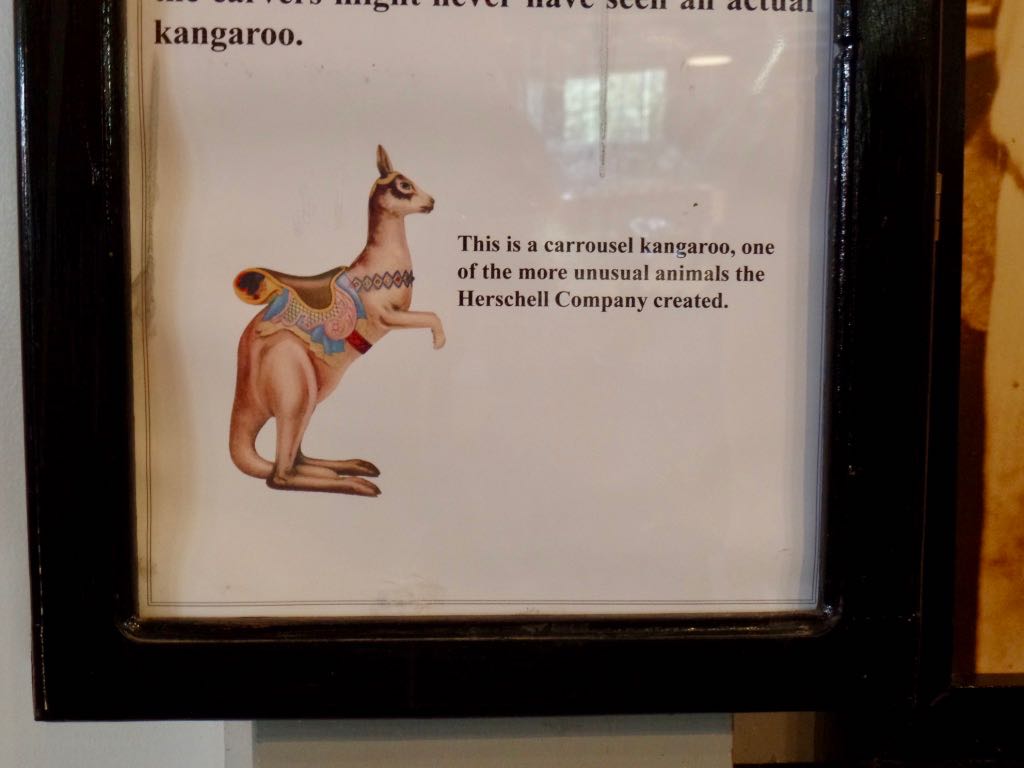 A picture of their carousel kangaroo. Seems like a natural, right? But you never see them. Probably because they're standers and you can't ride in the pouch. 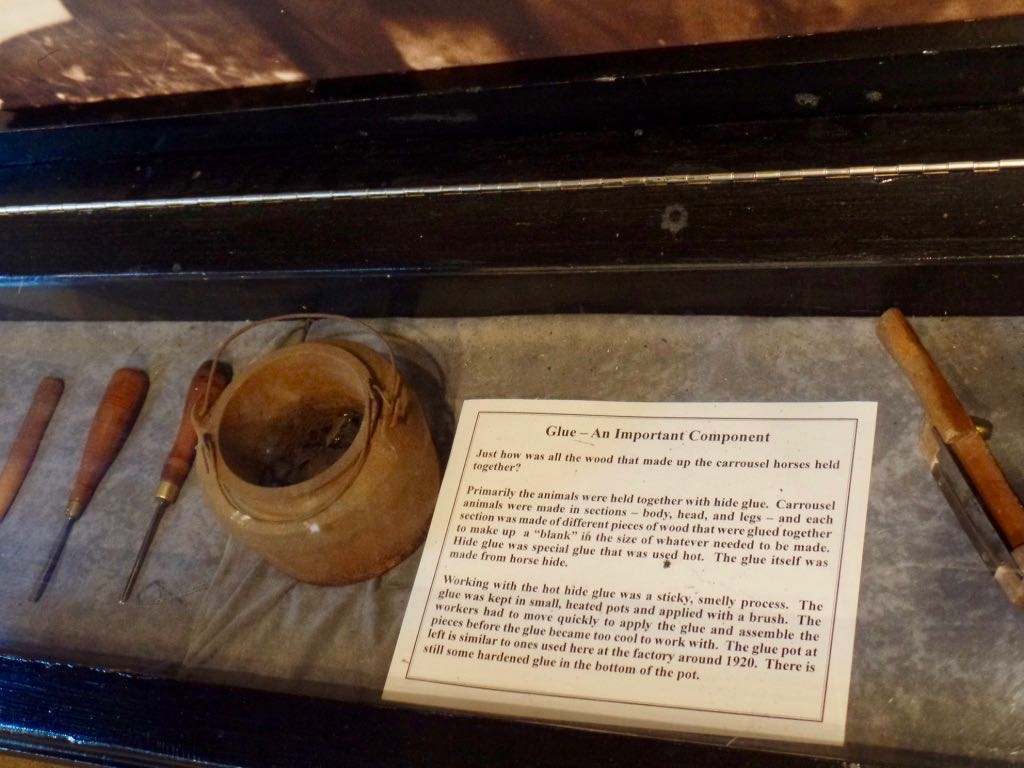 Museum sign explaining the importance of glue. ... Although yeah, it turns out glue was really important and for many purposes better than nails or screws would have been. 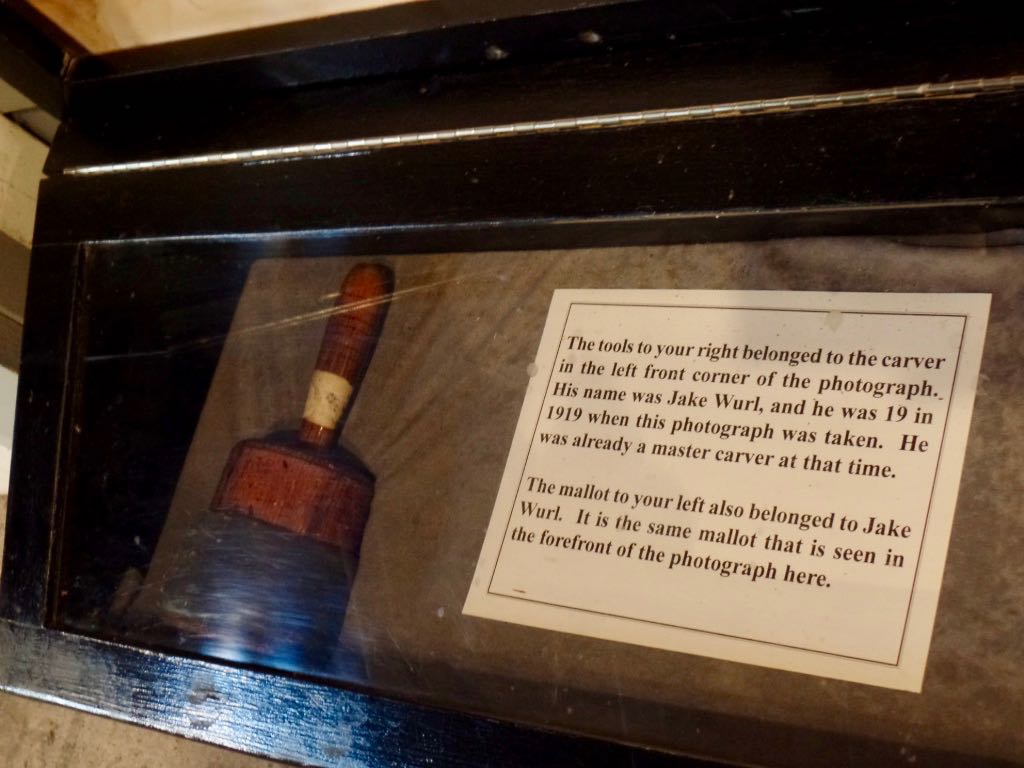 The factory had, when it became a historical site, essentially none of the tools that it had when it was a working building. I think just the paint can sealer was left. But they got tools of the kinds used at the factory and, for a couple cases, actual tools. 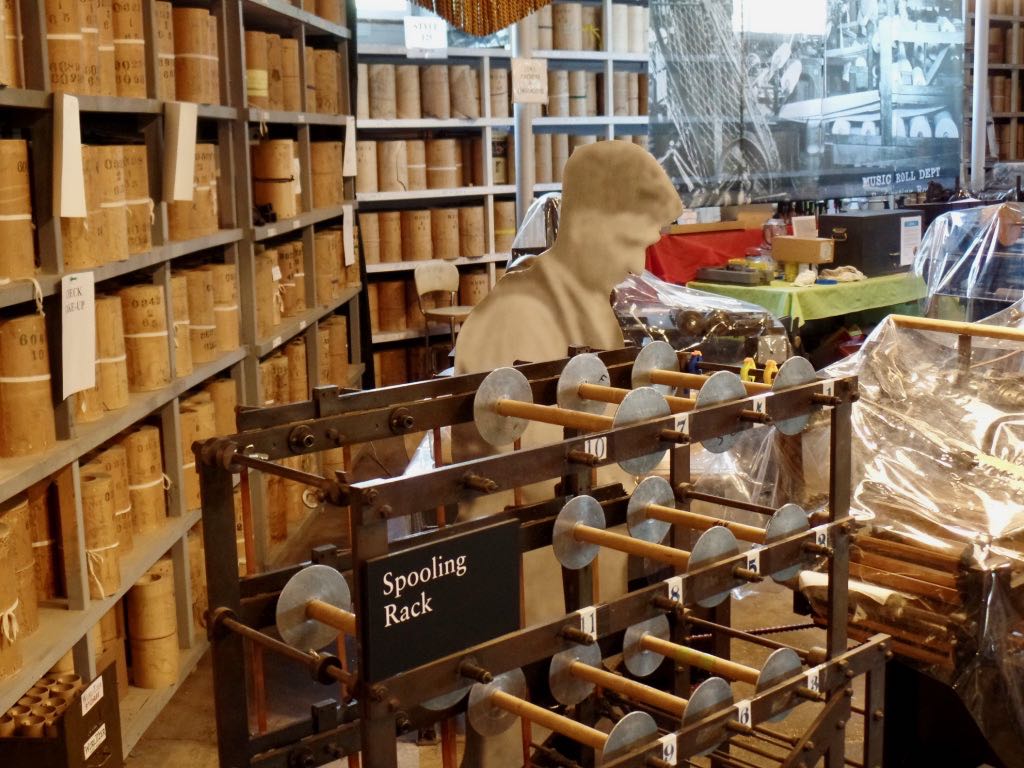 Ghost worker here in the scrolls for the band organs. 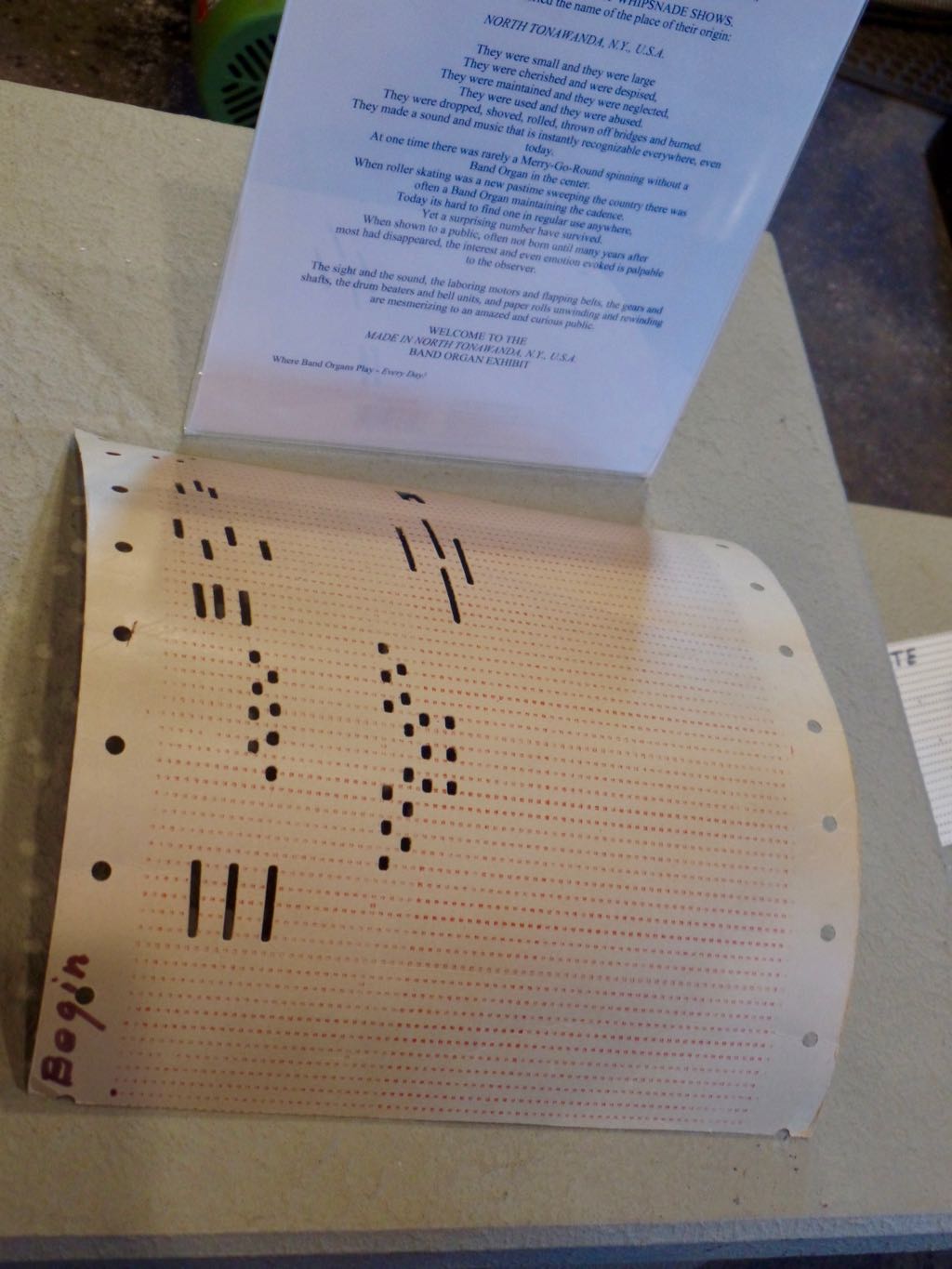 An example of the master scroll for a band organ's program. 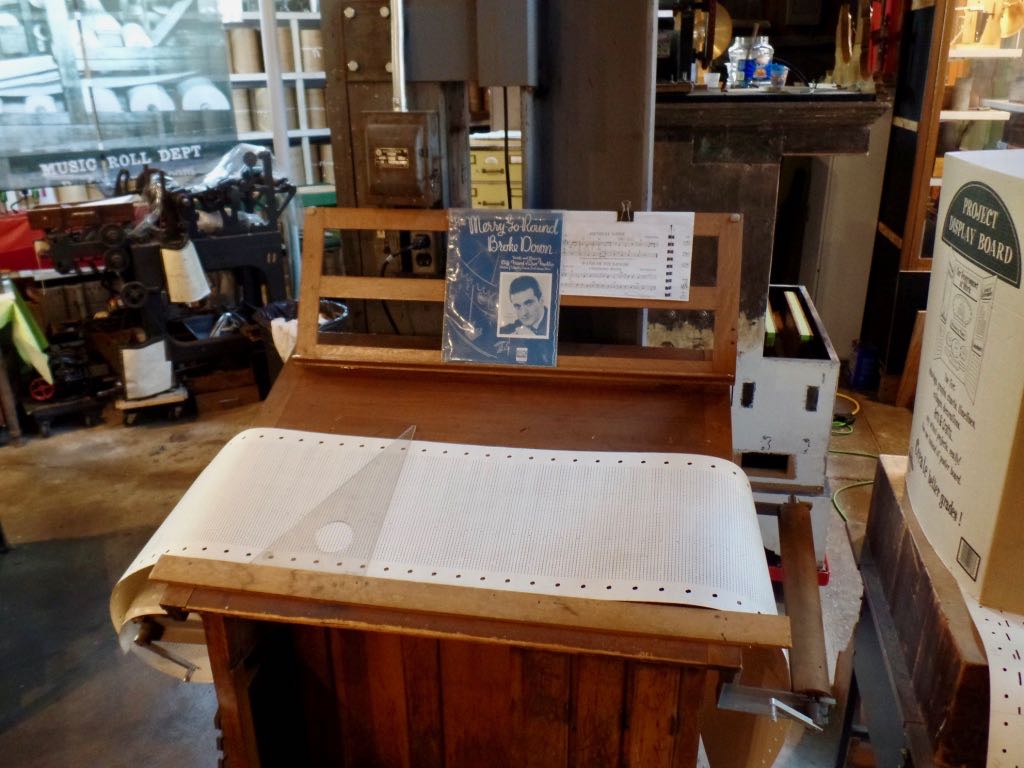 More samples of a music scroll-to-be. And, yeah, that sheet music is for The Merry-Go-Round Broke down. The other sheet is the ``Birthday Theme'', Happy Birthday To You (and credited ``Traditional''), with ``Waves of the Danube (Anniversary Theme)'', Jan Ivanovici, beneath it. 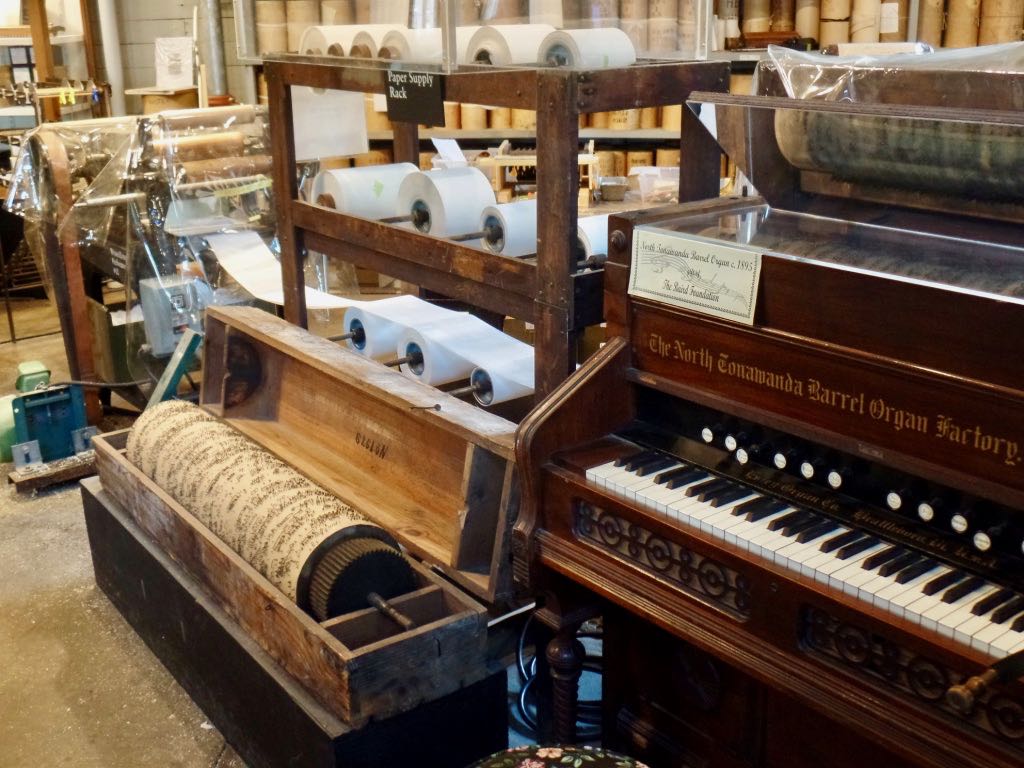 I think the thing on the left is the pins that record a whole song's player-piano performance, as part of turning this into a music scroll. 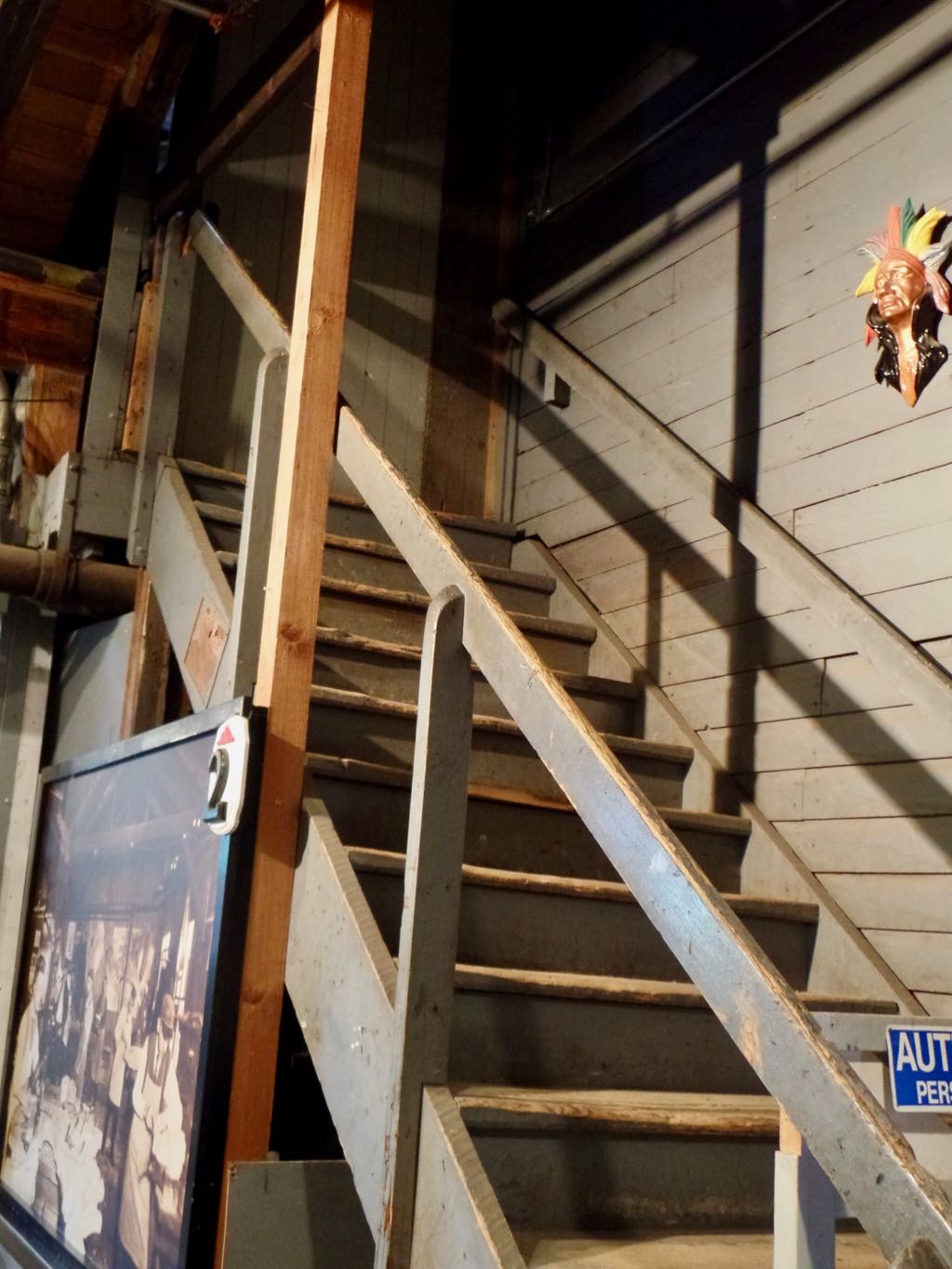 Stairway to nowhere. Well, it probably was a supervisor's office or something back in the day. You can see the start of its Authorized Persons Only sign.

Trivia: The first cartoon with Mighty Mouse under that name, rather than Super Mouse, was The Wreck of the Hesperus, released the 11th of February, 1944. Source: Terry Toons: The Story of Paul Terry and his Classic Cartoon Factory, W Gerald Hamonic.