Come, come one, come all

I have exciting mathematics for you! My All 2020 Mathematics A to Z: Möbius Strip covers a topic I honestly would have sworn I'd written an essay about before. But I hadn't, and so have fixed that now.

Lake Lansing Amusement Park closed after the 1973 season. Could there be pieces of it still alive? Trivially, yes: its merry-go-round moved first to Cedar Point, where it became the Frontier Carousel. That carousel building still exists, though it's used only for a haunted house at Halloweekends. (No idea what they're doing with it this year. We likely will not see it.) The carousel then went to Dorney Park, where it still runs. And the Superior Wheel, a fast-running Ferris wheel, moved to Crossroads Village out by Flint. We ride that every year when we visit for the holiday lights. (We hope we'll be able to go there this year.) But ... anything else?

bunny_hugger thought to look at the slightly disorganized collection of Water Winter Wonderland, ``The Best of Michigan, Past and Present''. It has a page of memories of lake Lansing Amusement Park, including simple photographs. It hasn't got a map of the park, unfortunately. But it has got enough pictures to let us piece together a couple parts of it. The Ferris wheels they had. The Dodgems, underneath the lift hill of the Roller Coaster. The Carousels. Tilt-a-Whirl. Kiddie boat ride. Skee-Ball. Flying scooter. And ... A-ha! The roller coaster and the Turnpike track. Using that, and the roads, and other photographs showing the carousel building ...

Yeah. That track we saw has got to have been the Turnpike ride. And an unusual one. We're accustomed to Turnpike rides where the cars run over a vertical metal rail, with bumpers so that cars can't go too far one way or another. Not so at Lake Lansing Park's. They had short wood-rail walls, and metal car bumpers that would push the car back from going off the track. But you could roam freely within the whole cement area and it looks like you might even be able to overtake another car. It must have been really exciting.

There's maybe more. Next to the Turnpike track is another small paved track. Maybe this was for the kiddie auto ride? Or some other attraction, gone nearly a half-century now, but also not vanquished.

I would rather have been able to go to an amusement park, but I am glad to learn so much about this vanished park.

With one mystery settled how about discovering something about another mysterious feature of a different and now-vanished park? 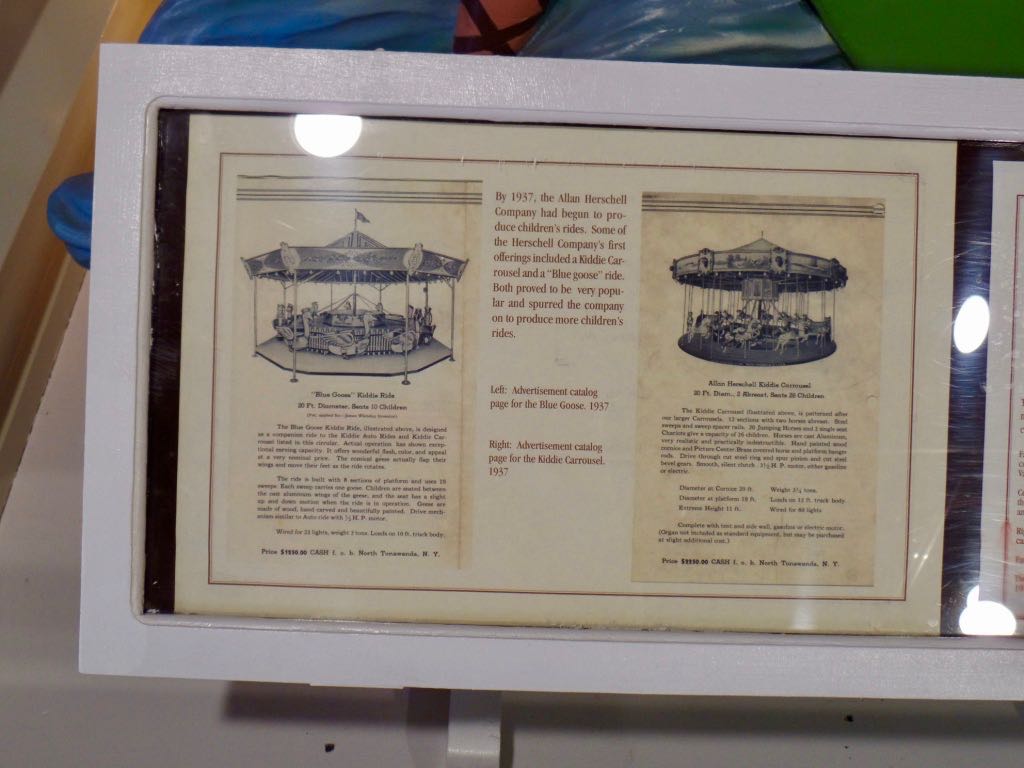 And here we see the Blue Goose ride explained. Remember, we saw one at Fantasy Island? So, here's advertisements. They geese ``actually flap their wings and move their feet as the ride rotates''; price $2250 cash FOB North Tonawanda, at least in 1937. 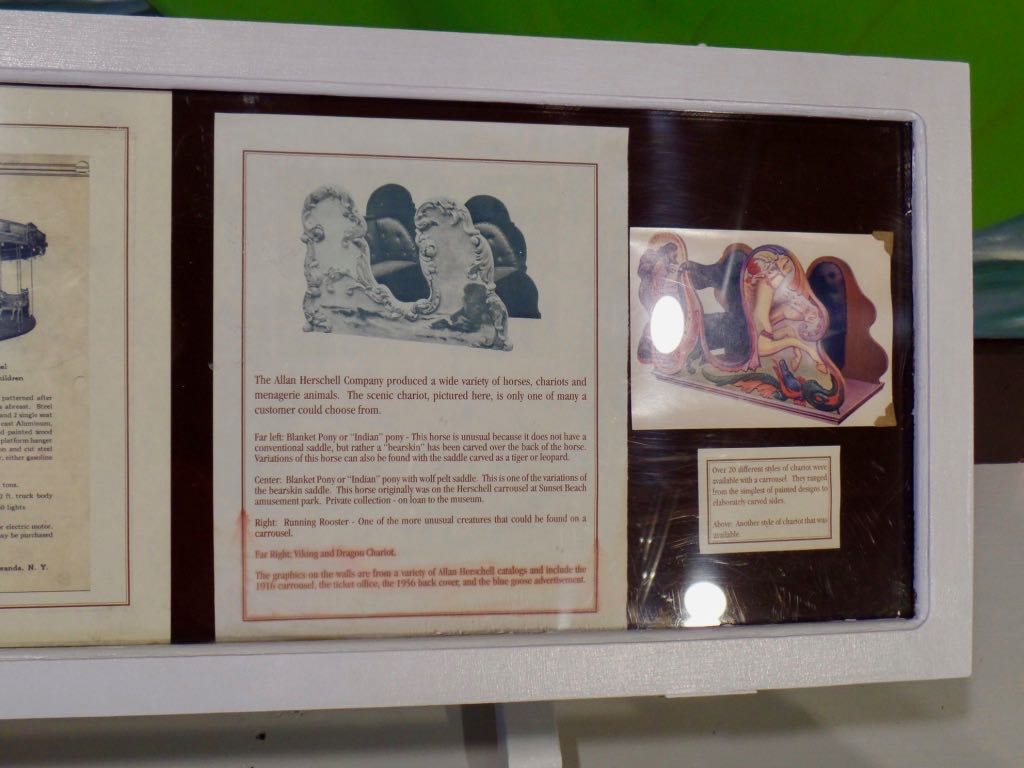 And pictures showing off some of their chariots; they offered more than twenty styles. 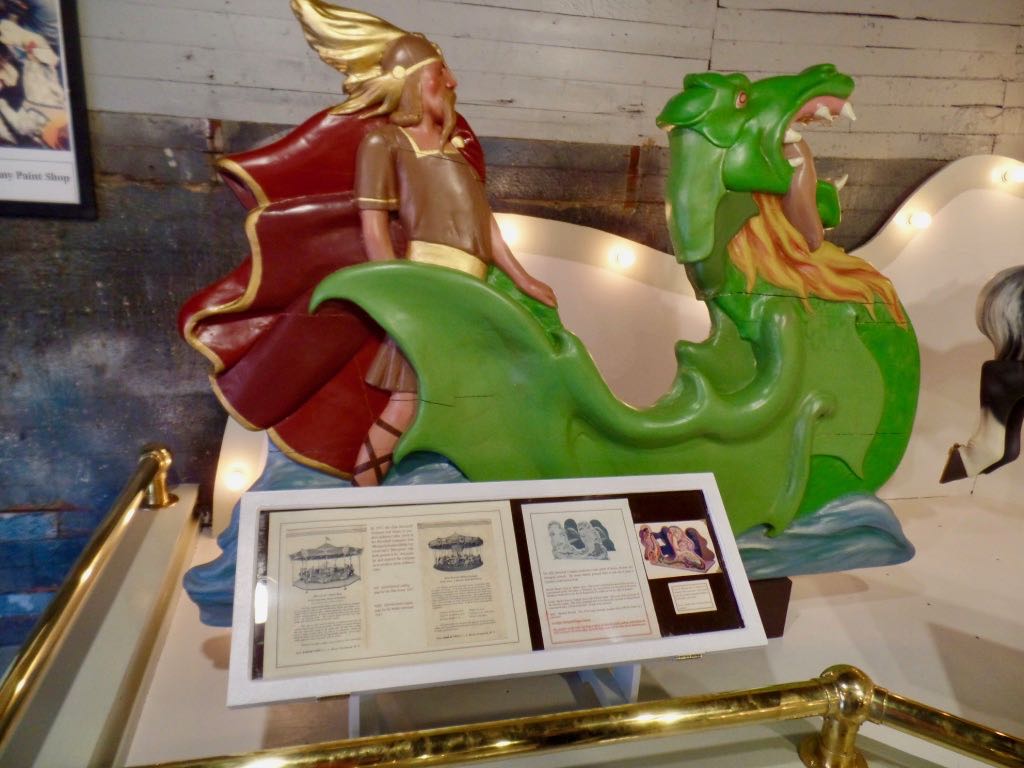 Here's one of your classics with a dragon or sea serpent, as you like painting it. 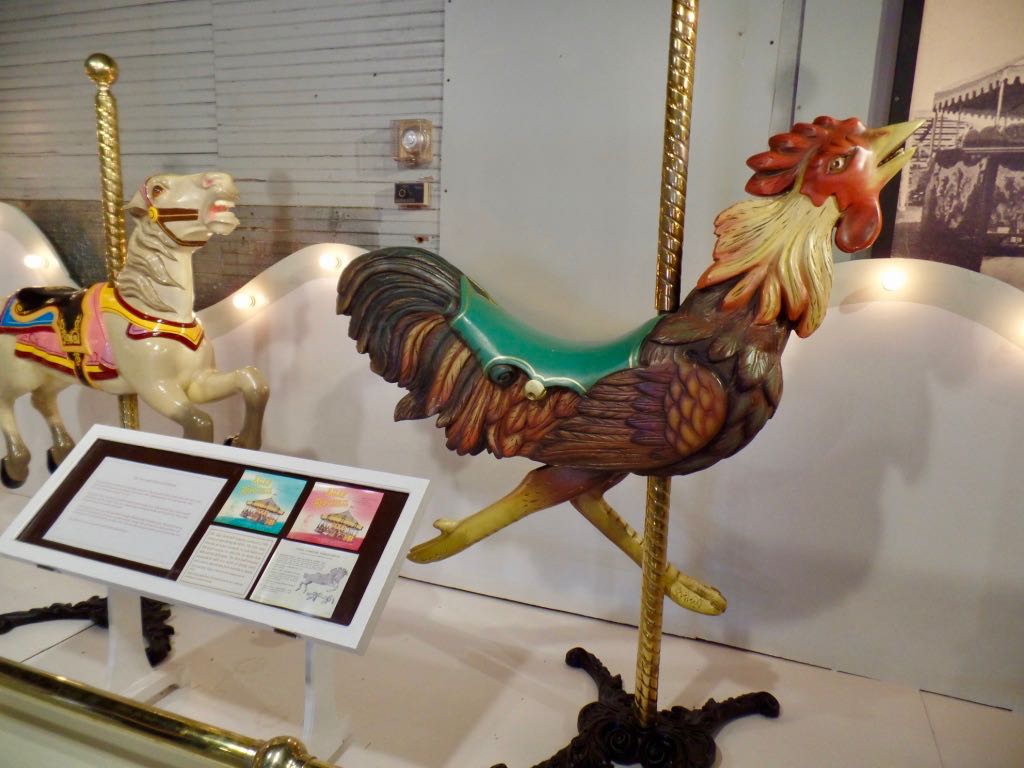 A horse and a rooster; roosters are probably the most common birds to be on merry-go-rounds. 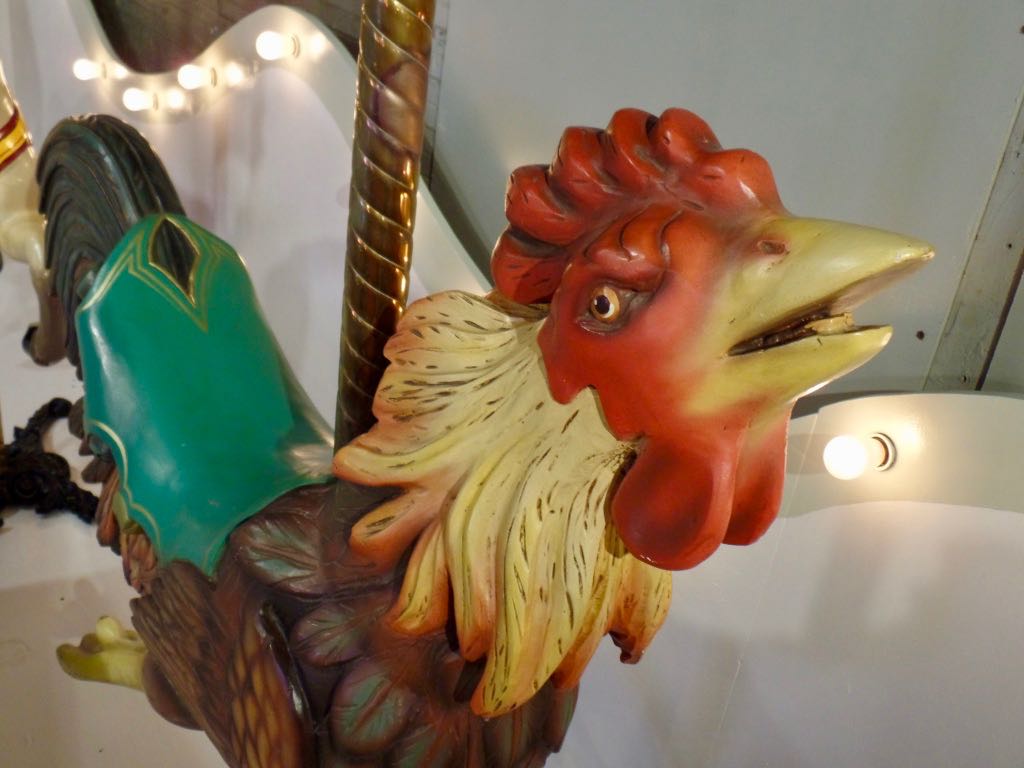 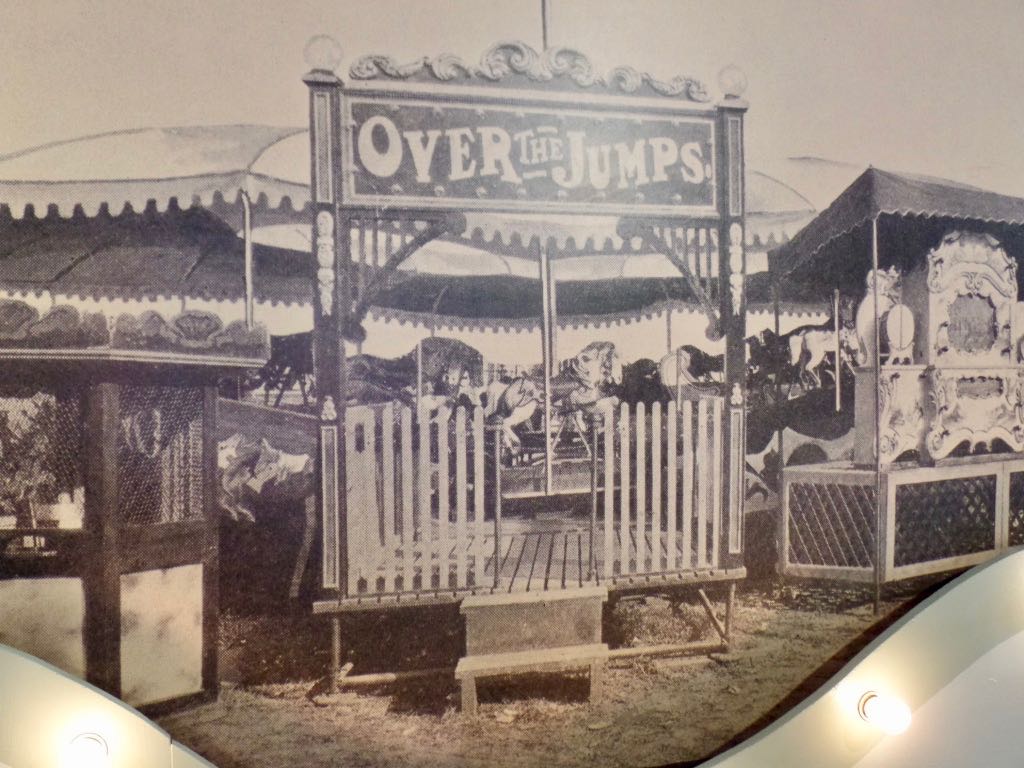 ``Over the Jumps'', offered from 1923, was a new kind of carousel. Its platform wasn't flat; the horses were on a moving platform with hills and dips. You can maybe make out that the horses are mounted to the bottom, with grasshopper attachments, rather than poles hanging from the top. 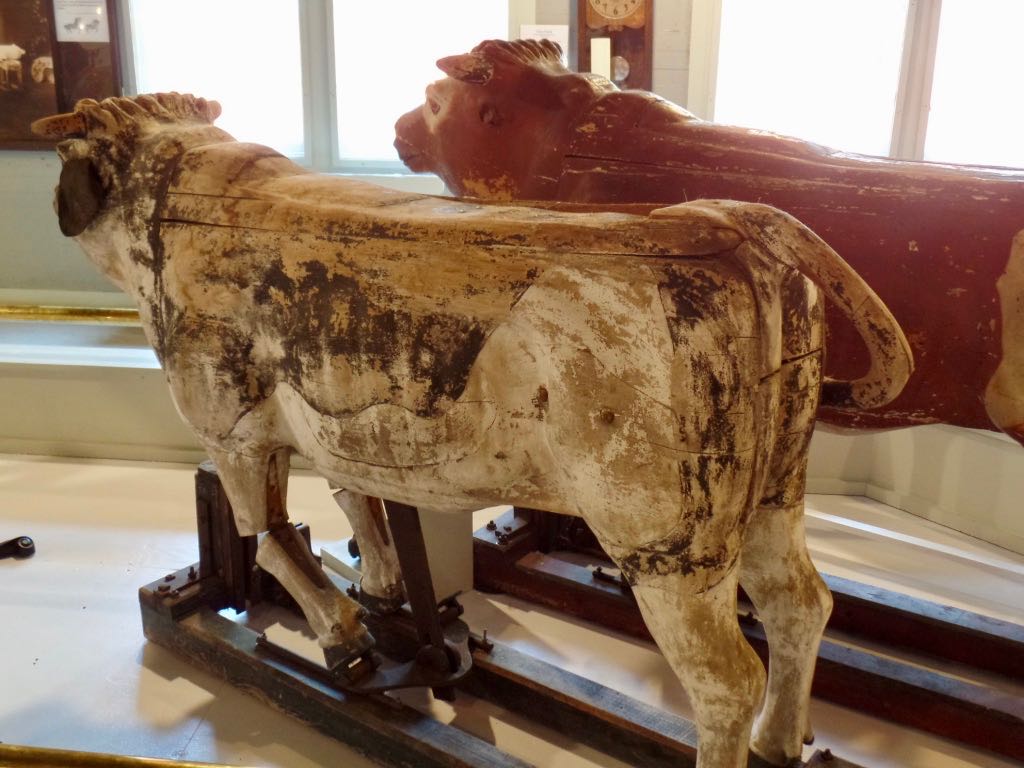 Cows! You almost never see them on American carousels and I'm not sure if these were Herschell or Spillman mounts to start with. 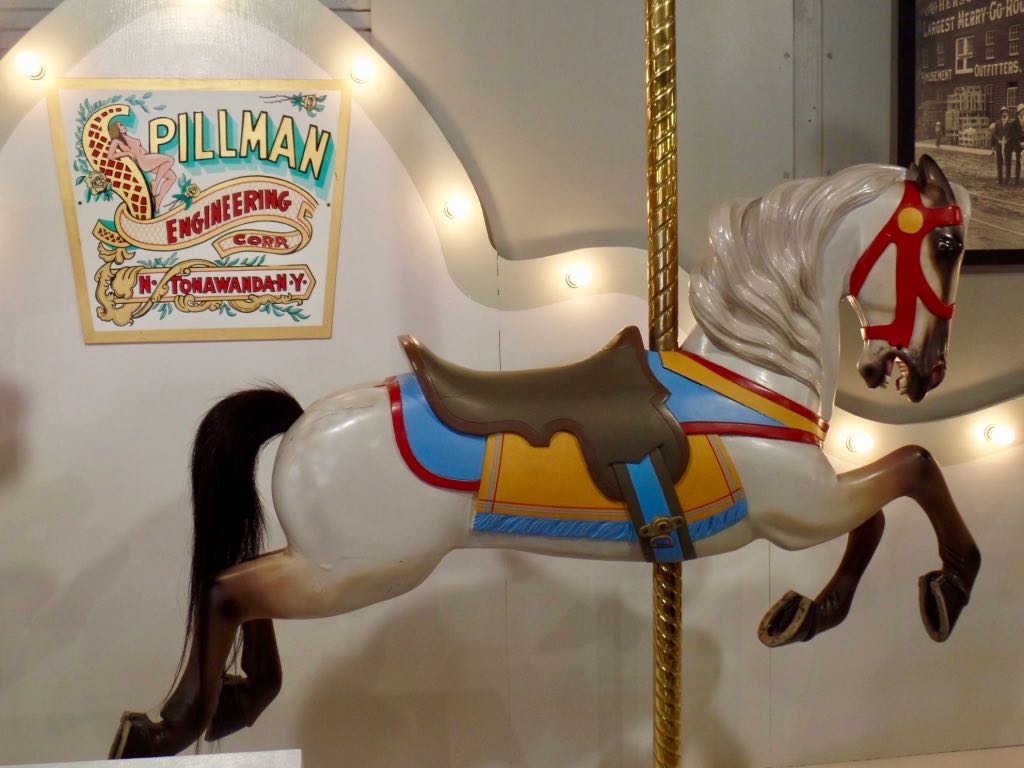 Spillman's logo alongside a jumper. 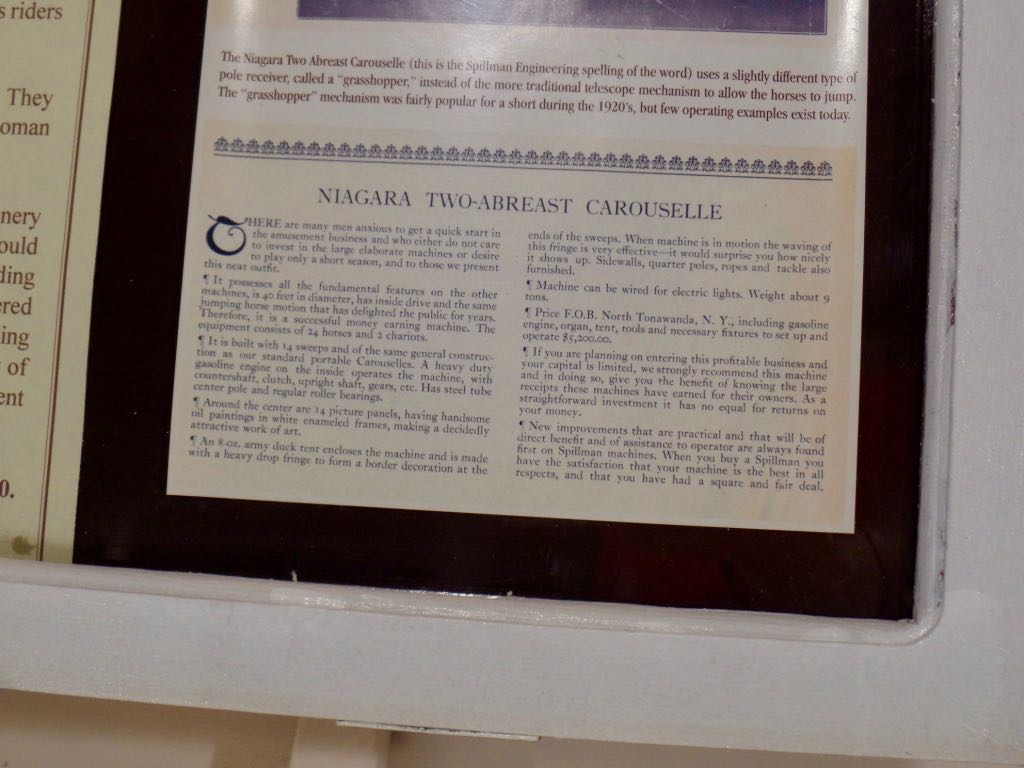 What the catalogue offered if you wanted to buy the two-abreast carouselle, and note how Spillman engineered another new way to spell the word. 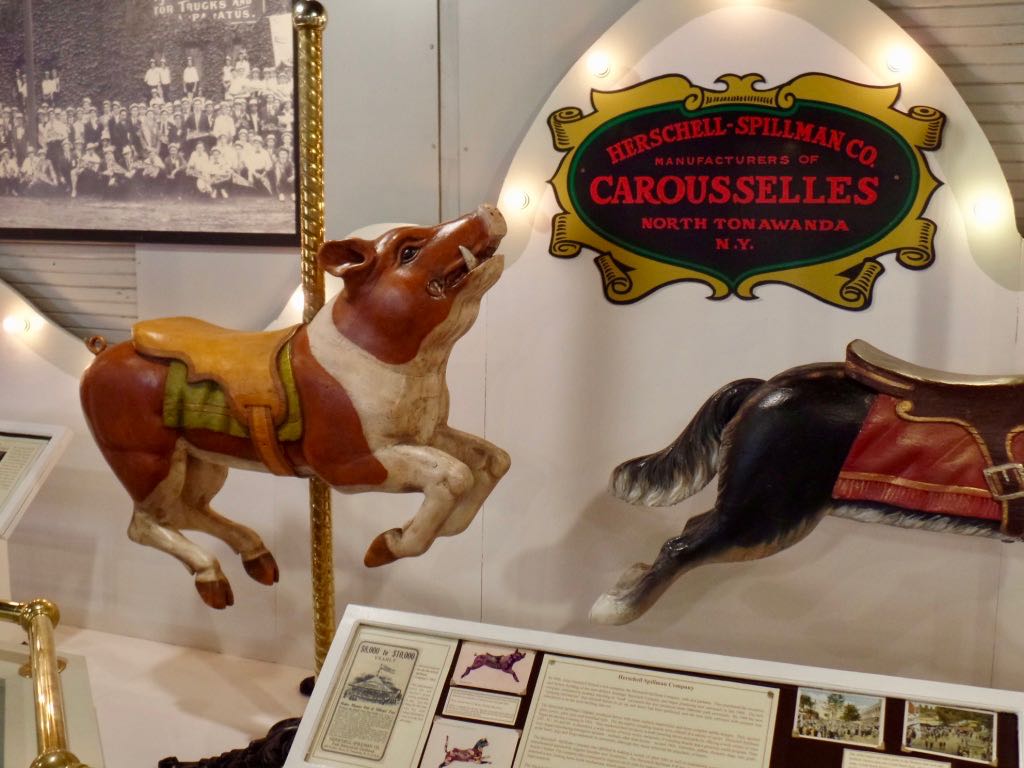 When Herschell and Spillman merged they just threw even more letters together into 'carousselle''. Also made a pig. 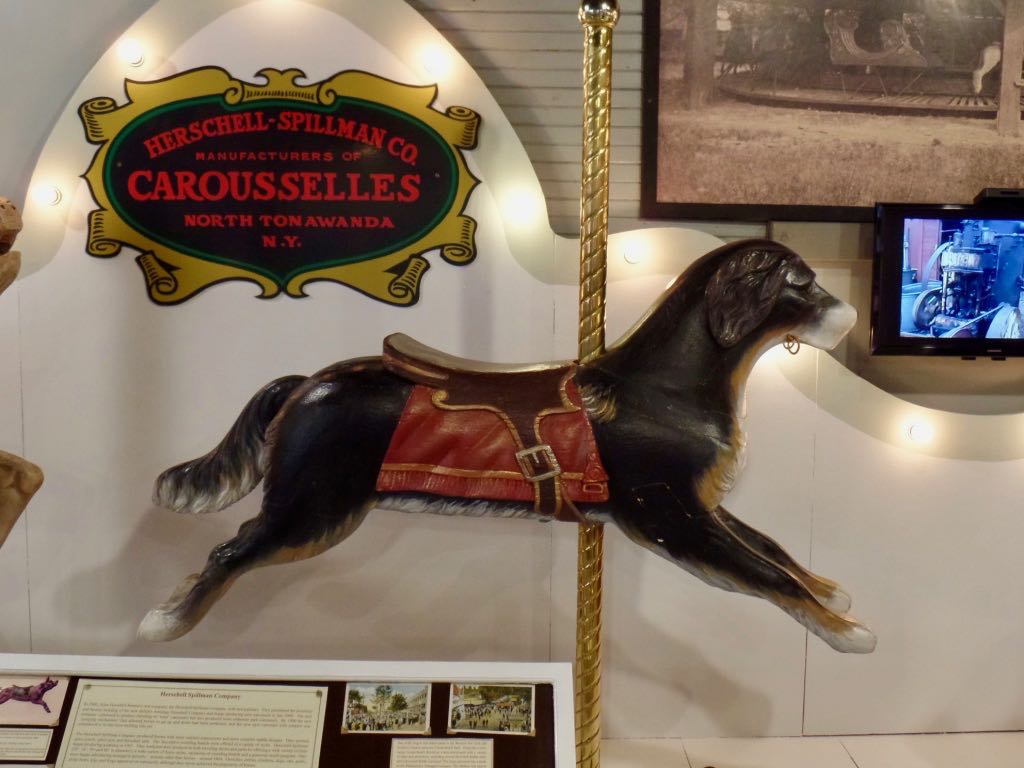 And a dog, which you almost never see on carousels. 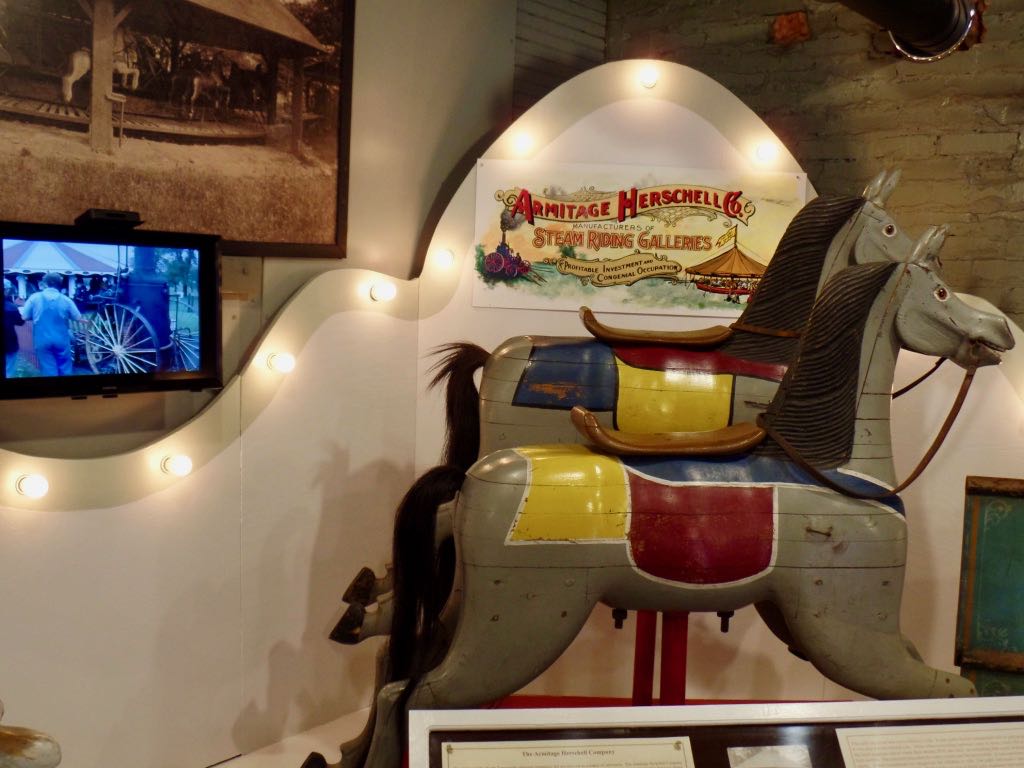 A couple of fairly plain-looking horses --- I wonder if they were made for travelling carousels that would need to take more handling --- with a banner for the company, promising that its Steam Riding Galleries gave ``profitable investment and congenial occupation''.

Trivia: The first nationwide strike in American telephone history began the 7th of April, 1947. The Long Lines department, handling long-distance telephone service, settled with strikers on the 8th of May for a $4.40 weekly pay increase. (The strikers' original demand was for $12 per week.) Source: Telephone: The First Hundred Years: THe Wondrous Invention that Changed a World and Spawned a Corporate Giant, John Brooks.

Currently Reading: No Poems, or Around The World Backwards and Sideways, Robert Benchley. A real actual book I bought at my first trip into a used bookstore since the pandemic started and that the owner admitted he'd never seen before either.