I have a big project for my mathematics blog that I hoped would publish this weekend and who has the time for that? I should get to it tomorrow. But, meanwhile, recently running on it have been:

And then in cartoon-watching we have 60s Popeye: Seer-ring is Believer-ring, which isn't about Wimpy offering to pay somehow? Seriously, the cartoon is basically all right except the Wimpy thing is hard to understand.

So now I would like to bring you to the Cirque Italia, an (animal-free) circus that came to town last summer and that we discovered through their coupons at the Asian grocery we get ramen from. But there's a surprise too ... 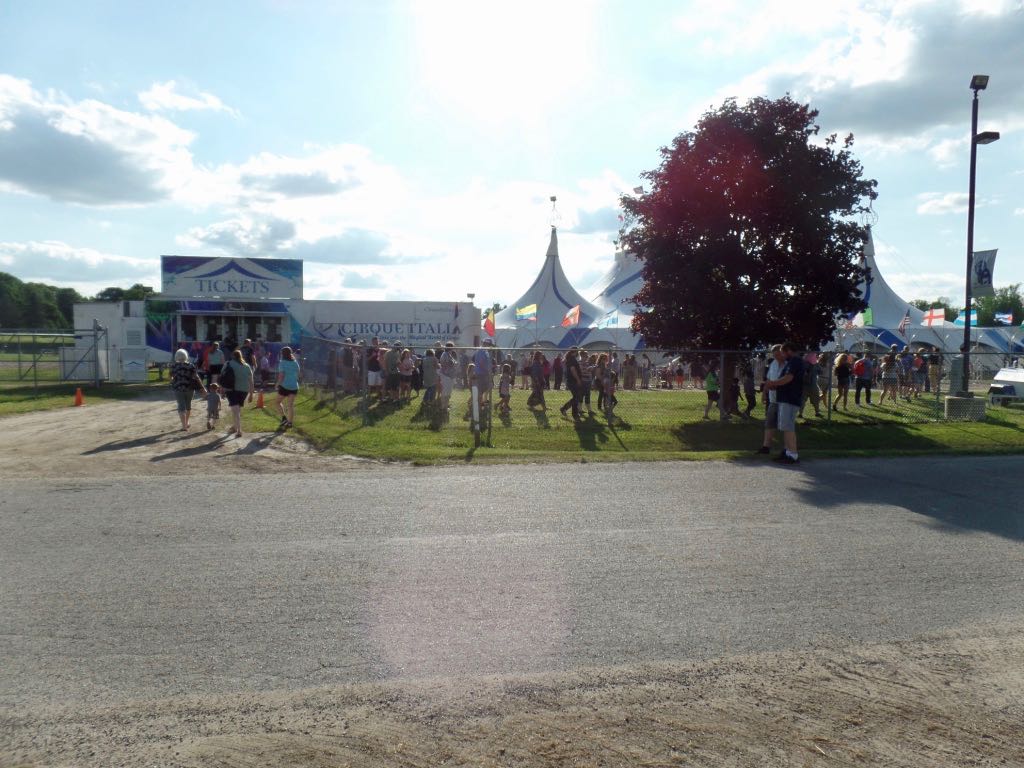 Cirque Italia set up on the Ingham County fairgrounds. 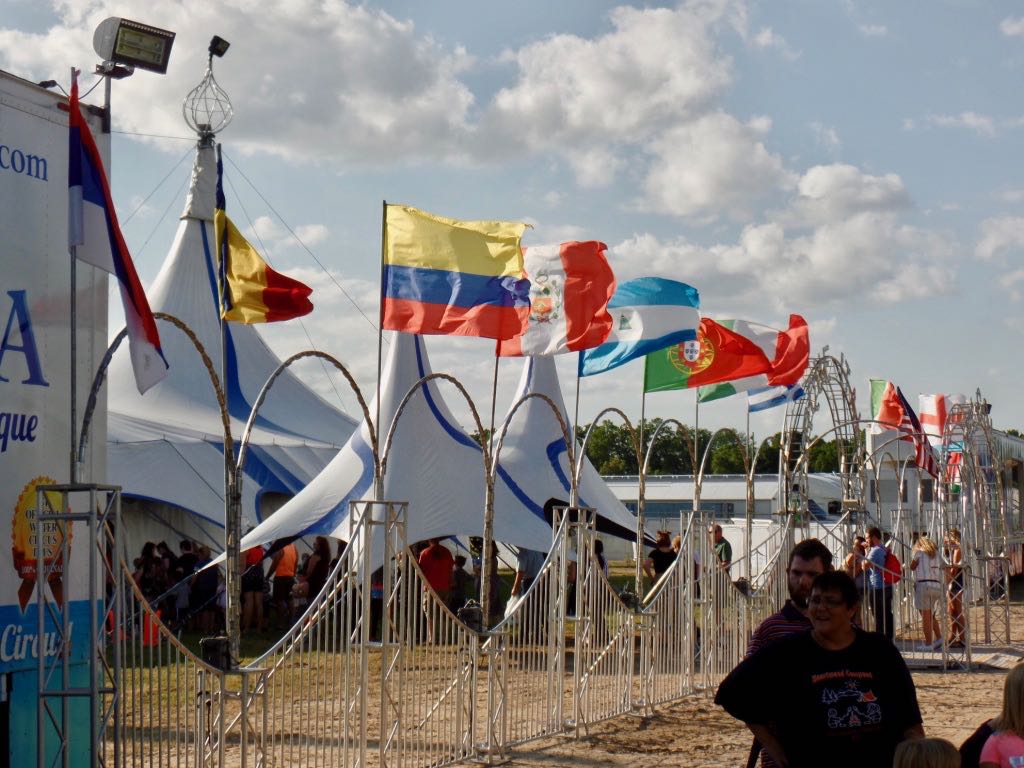 Flags of many lands set up outside the entrance. And then I saw the sign that no photography was allowed. I hid the camera in my cargo pockets and complied, although I know everybody had cell phones and was taking pictures anyway. 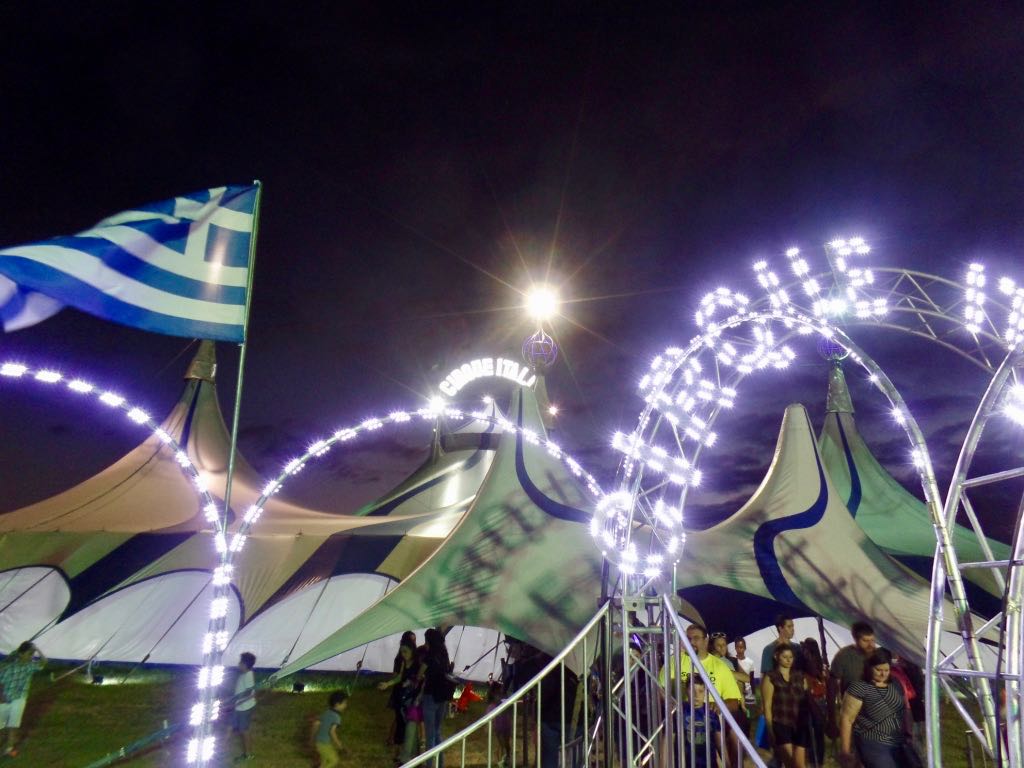 Looking at the entrance after the show, and as it's illuminated by night. 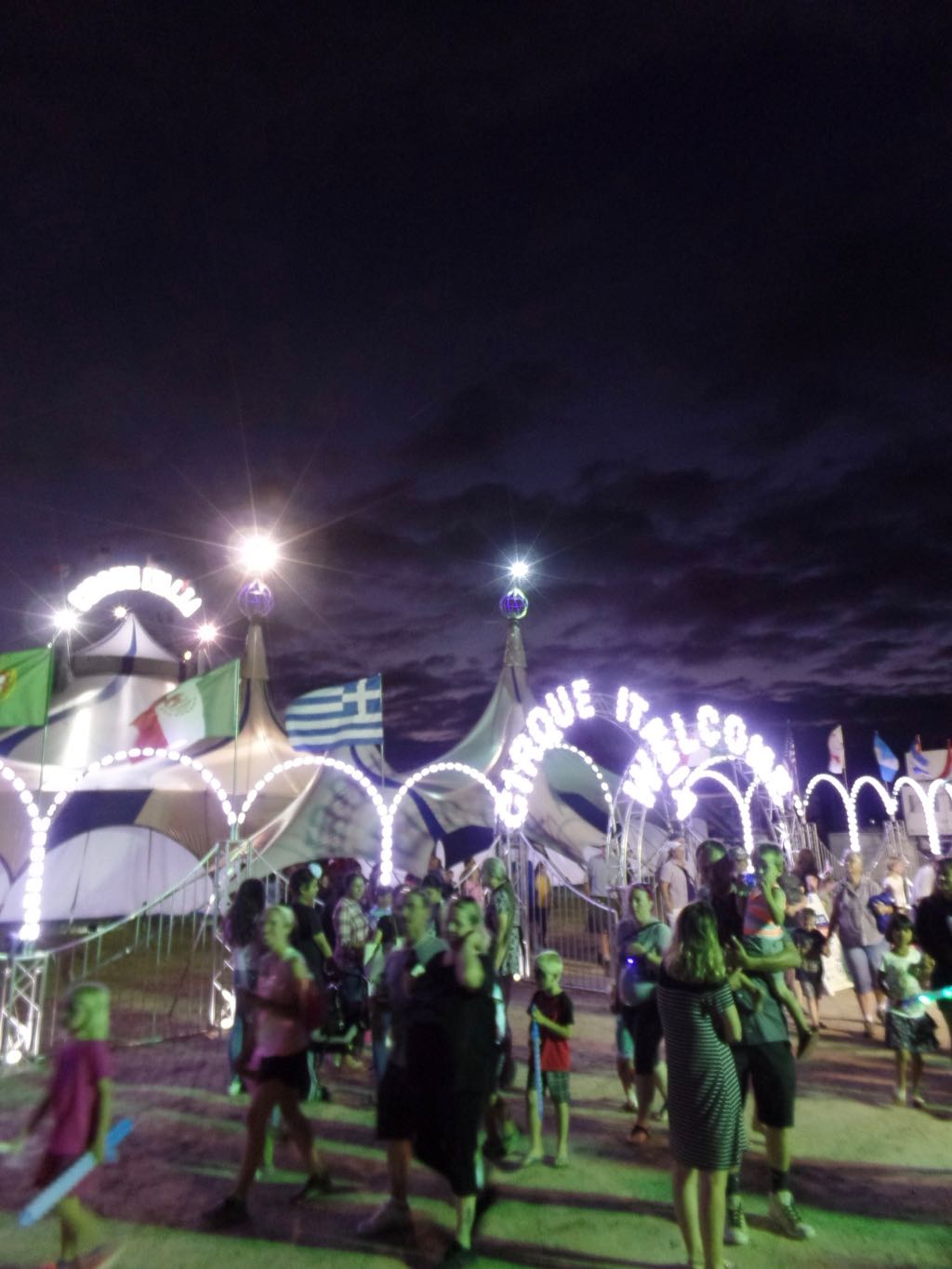 Although it was about 10 pm, it was also summer, so the sun was barely over the horizon. And it all combined to give us a nice purple sky background which adds so much to the circus atmosphere. 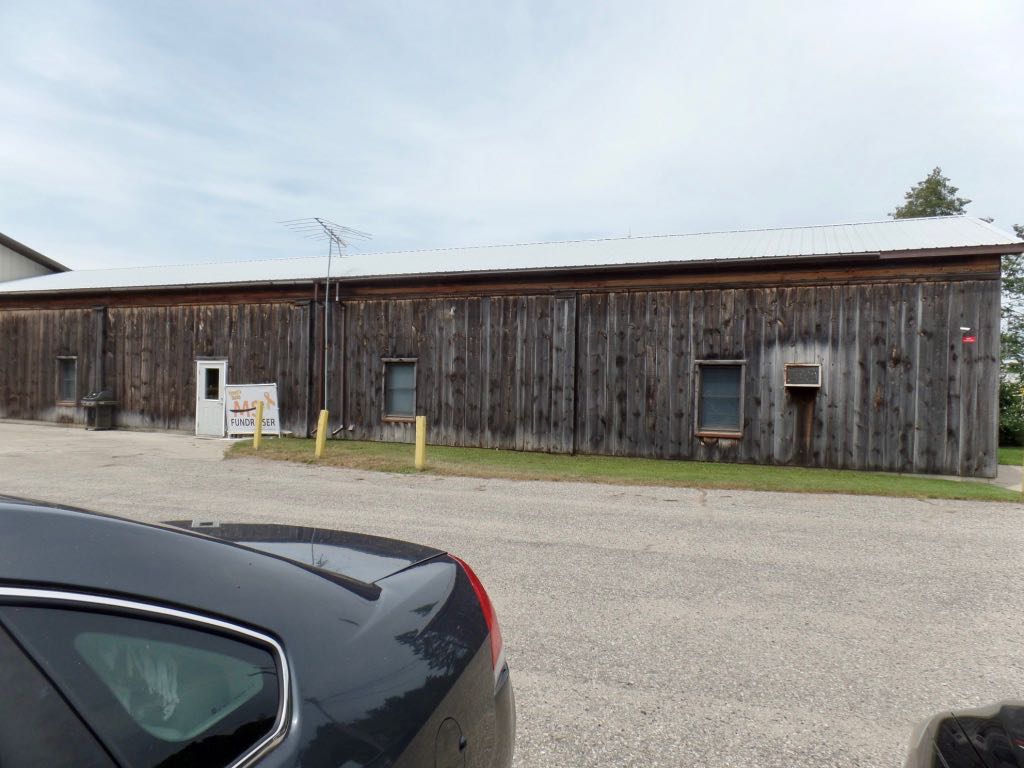 So that's that. Well. Coming up next, after so much time away from these pages, some pinball! The State Games of America, held as part of Fremont's Baby Food Festival. For the first time they weren't held downtown in the main strip, which kept us unfortunately away from the festivities. This was the old Special When Lit facility; they'd move to a new one in August. 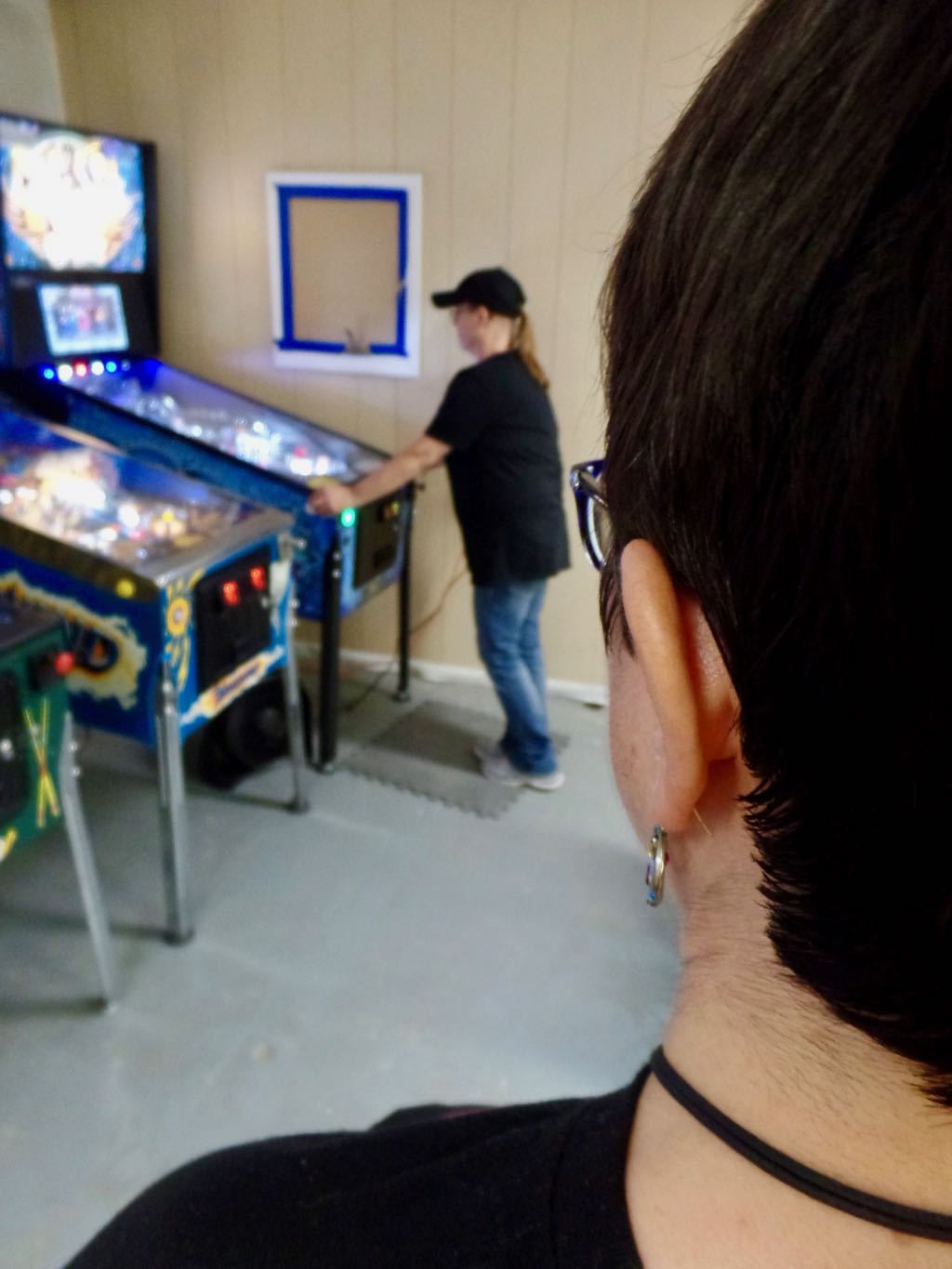 bunny_hugger watching the competition in the Women's Division. 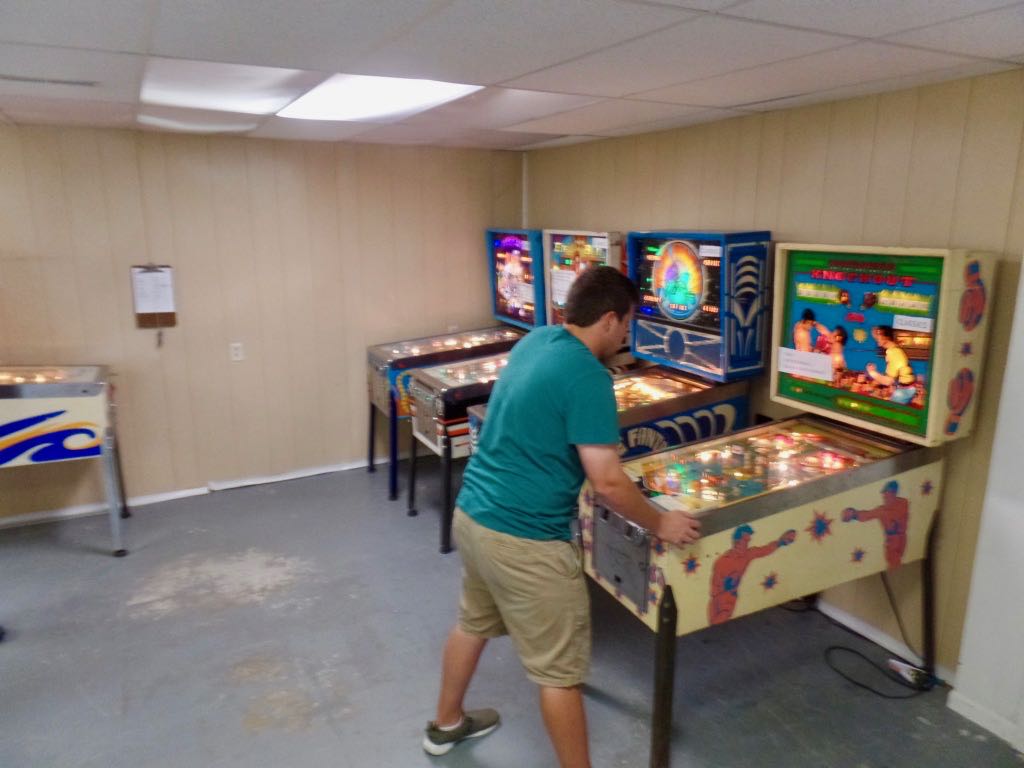 Here's the Classics tables. Knock-Out is a pretty fun electromechanical that took me just forever to get the hang of. Once you do get the hang of it, it's almost impossible to score under 100,000 points but, believe me, it took so long for me to break out of dismal 40,000-point scores. 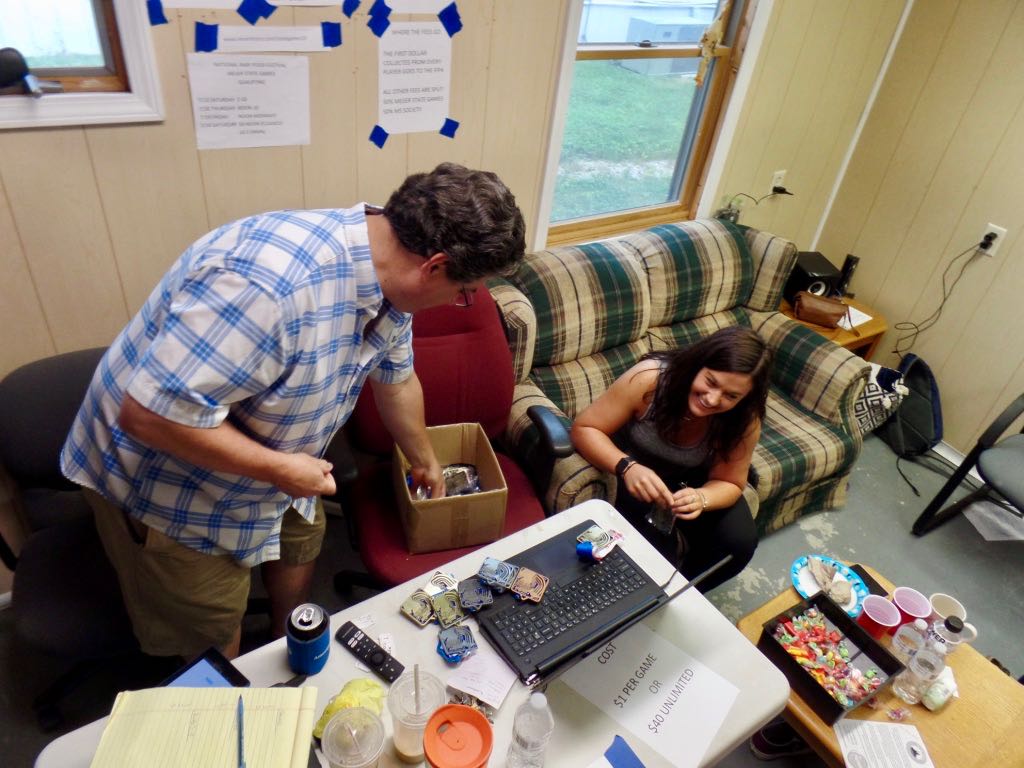 Tournament organizers getting medals organized, and surrounded by paperwork and a lot of snacking. Note in the background how many people are charging stuff, too. 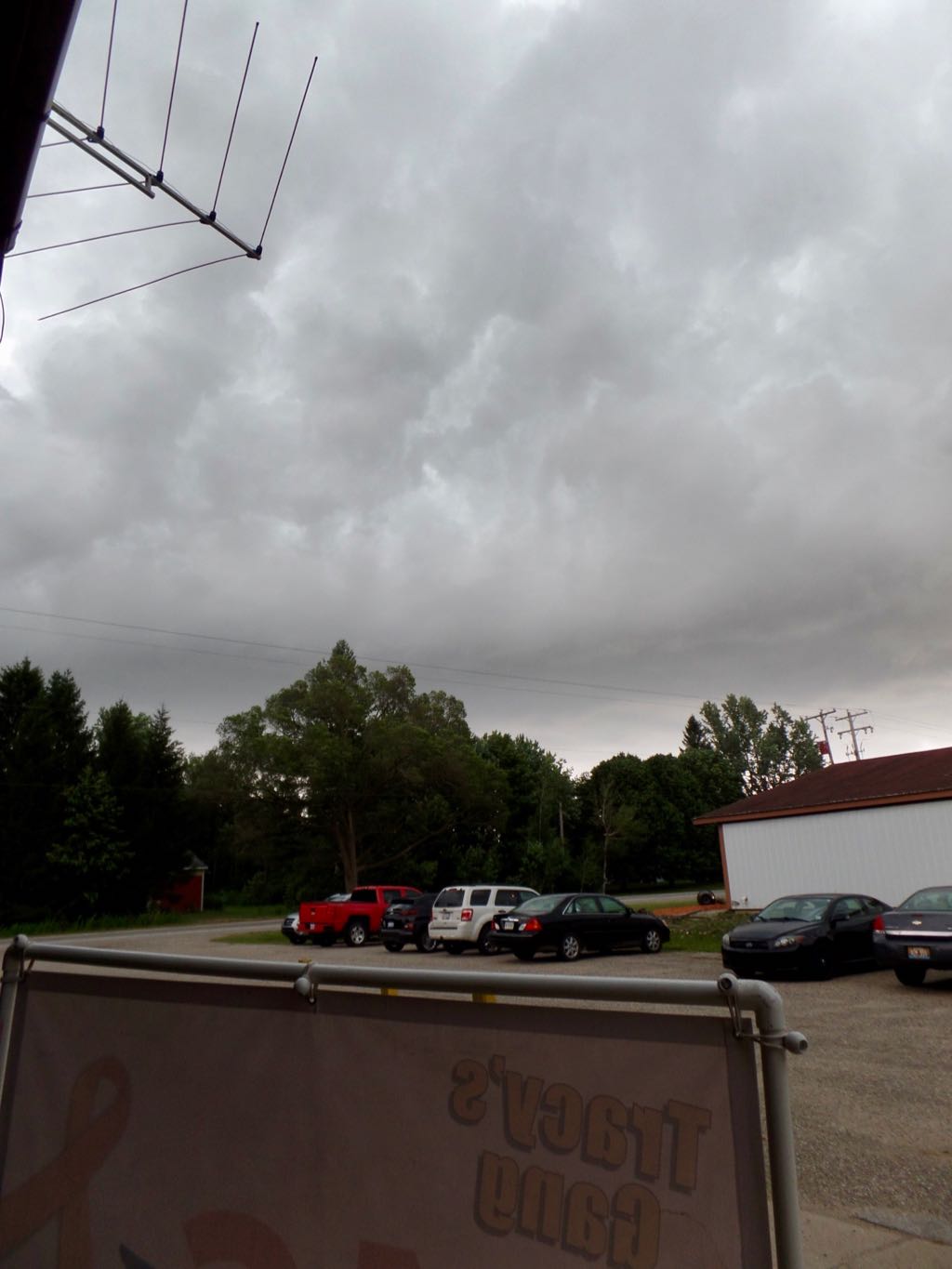 Storm rolling in! It's not the case that the Baby Food Festival always attracts storms, but I can think of three times it's been hit by rain in the six years we've seen it. 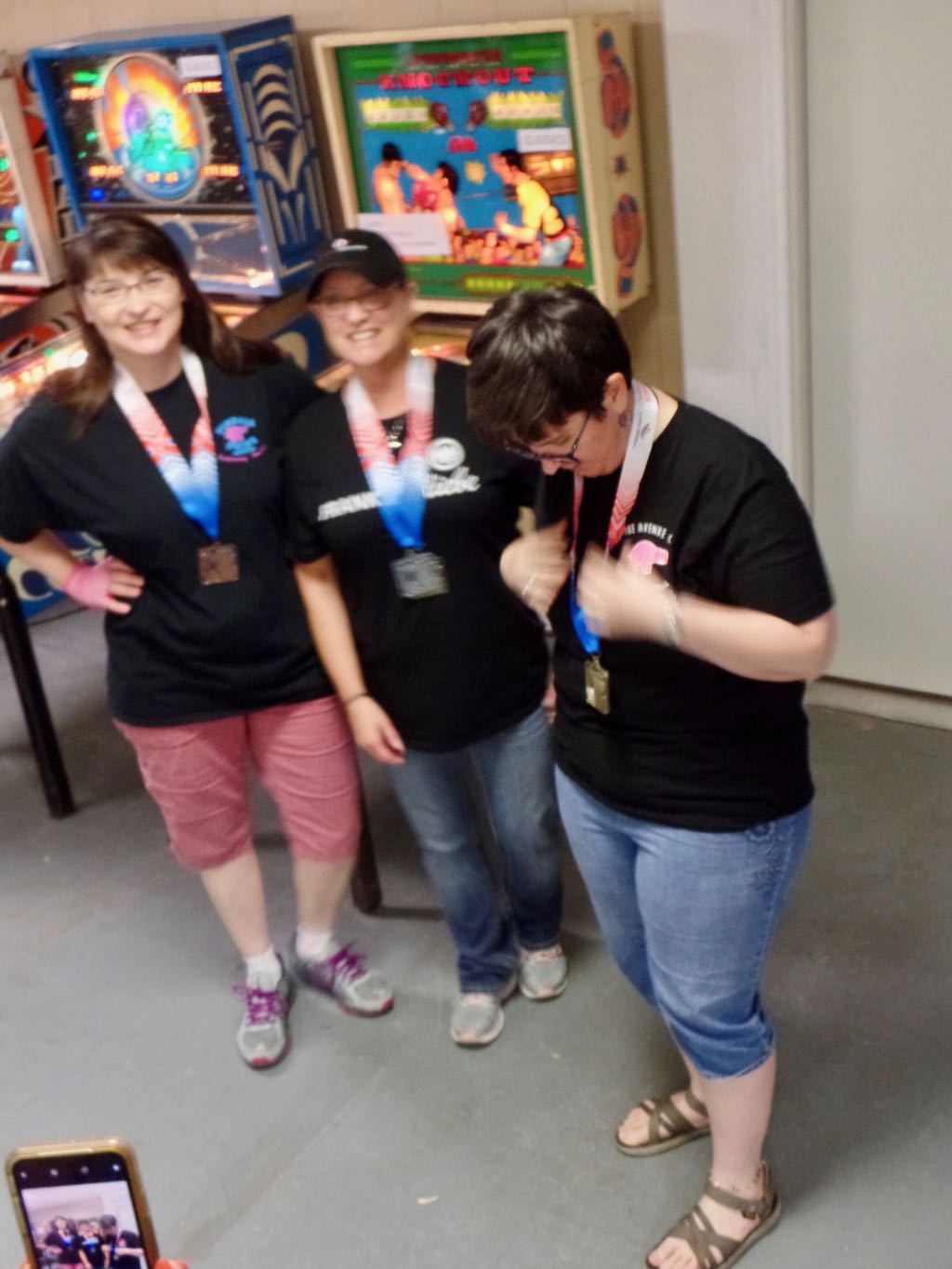 bunny_hugger taking home the gold in the Women's tournament. She had a dominating win, as I recall securing first place before the final game of the match was done, but she was unaware because she plays so much better when not aware of the standings. 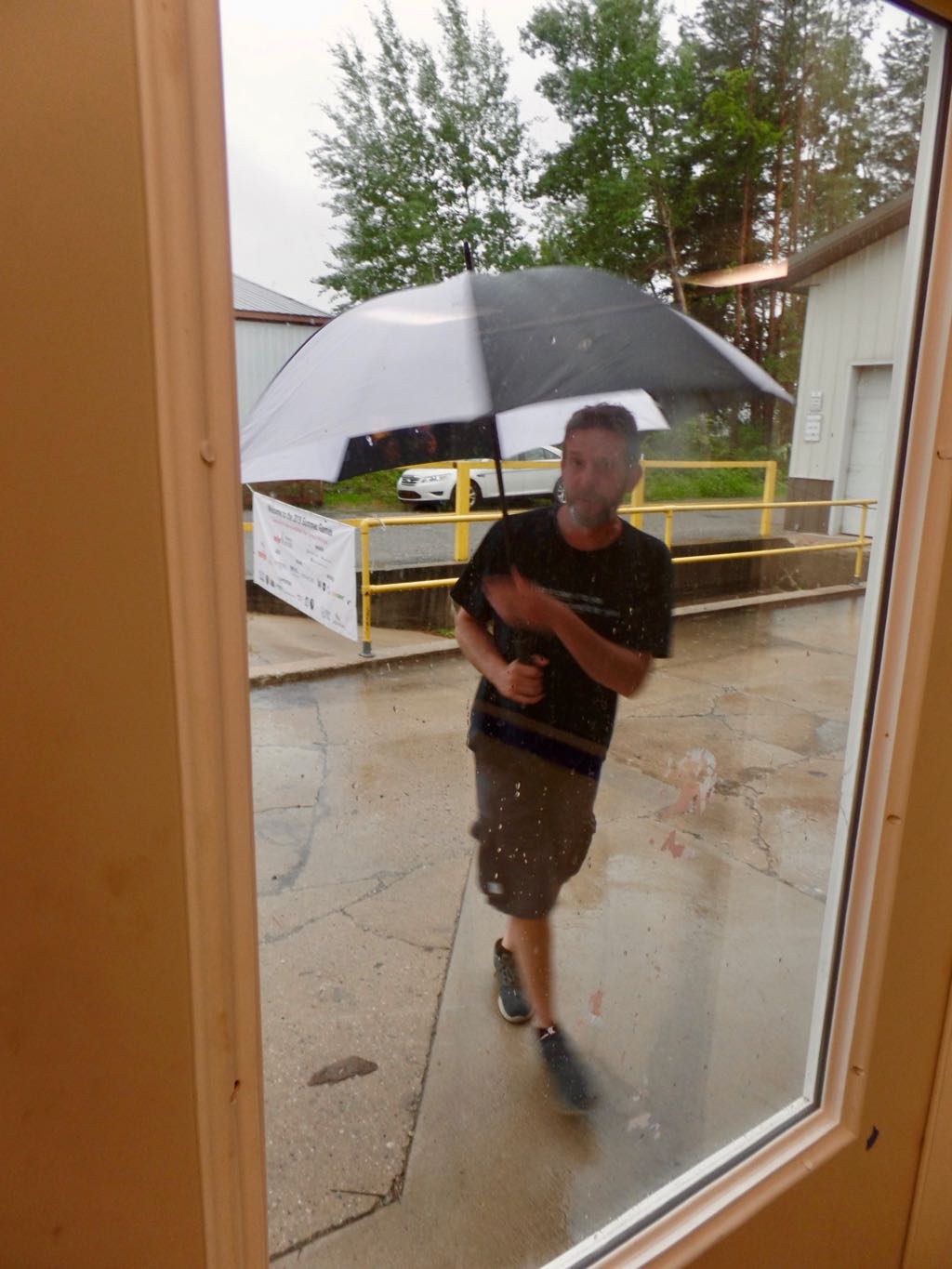 BIL has the sense to come in out of the rain. 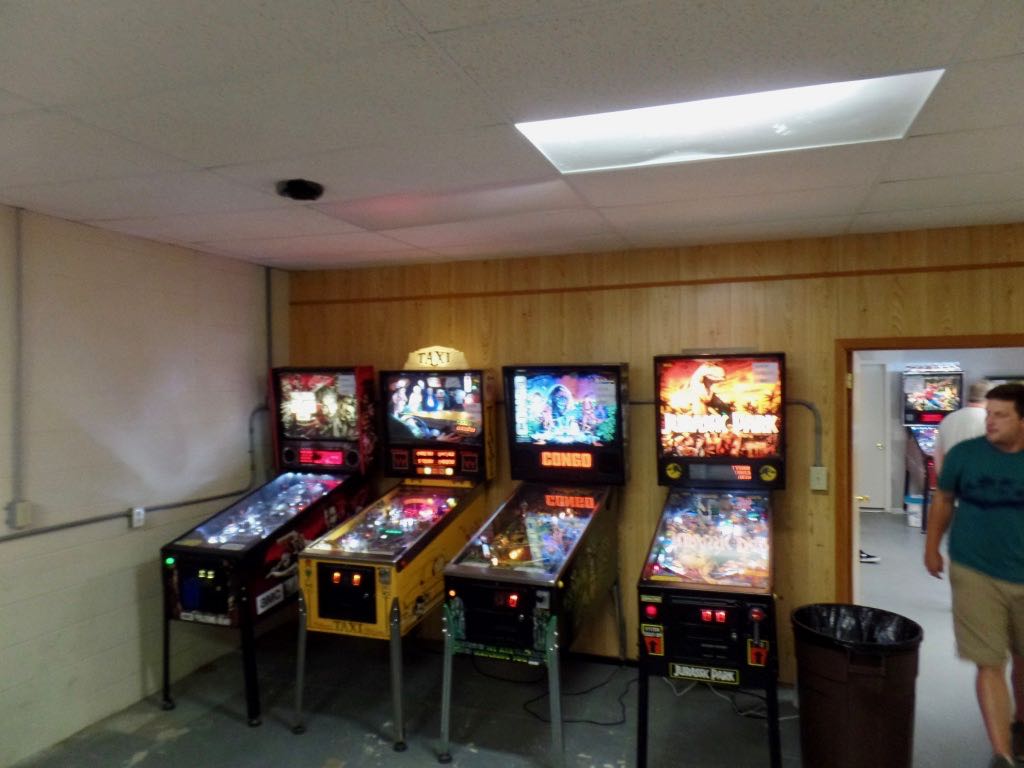 The old Special When Lit facility had two rooms; this was the second and ... you know, that Walking Dead on the left end there was always surprisingly good to me. I could beat better players than me, such as MSS, on it. 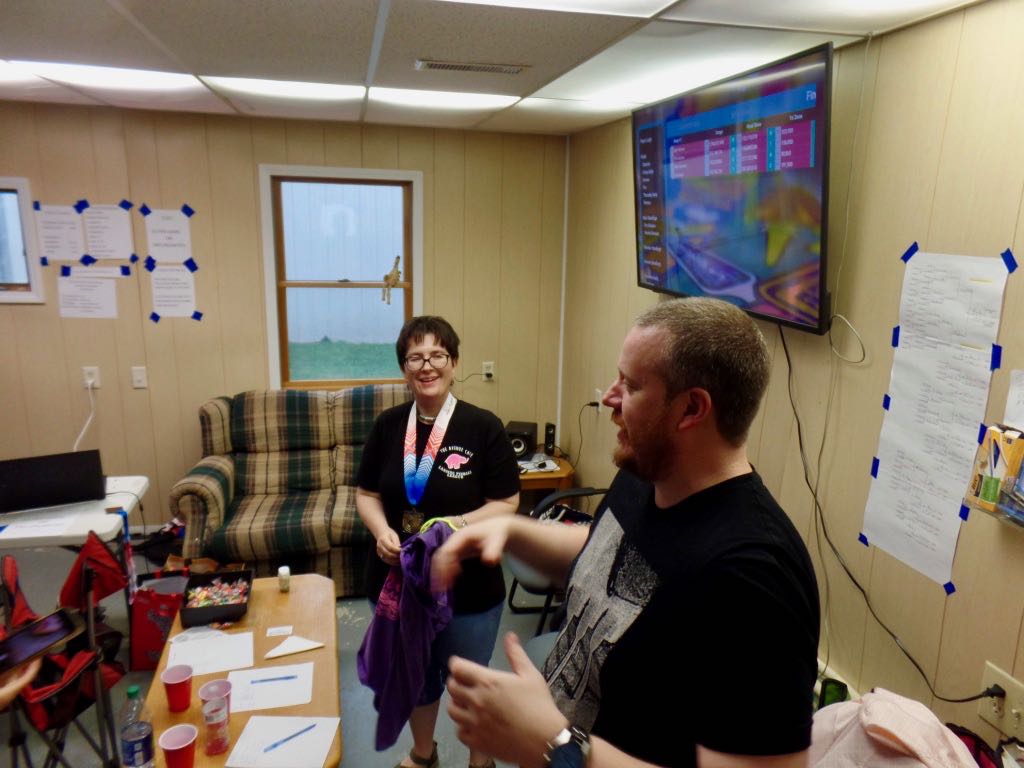 bunny_hugger all casually showing off her hardware while we figure whether there's time to pop over to Michigan's Adventure for a couple rides. (There was not.)

Trivia: The first chocolate sold in North America, in Boston in 1712, was imported from the West Indies to England and then from England to Massachusetts. Source: The World of Caffeine: The Science and Culture of the World's Most Popular Drug, Bennett Alan Weinberg, Bonnie K Bealer.