We walked from our house to the zoo, something that took a little longer than I expected, in part because we stopped to watch a freight train going under the road's bridge. It was our first visit to the zoo outside winter in a couple years. Unfortunately we couldn't get into the gift shop. Last time we visited they had a nice purse but it was right before Christmas. This time, given occupancy limits, there was a line literally out the door and several people deep. We thought we might get back later and of course they closed the gift shop before we did. There's free admission non-holiday Mondays before noon, so we could check the gift shop then, but she's also teaching Monday mornings.

The zoo turned 100 years old this year and so had a string of centennial signs. These put out some of the zoo's history and evolution. It started as a gift of some of the rich people in town, albeit with the provision that a trolly line be run out to the cemetery. And it started with what almost sound like ``the animals that happened to be on the grounds when we opened'', but that they said were gifts of a bear, a deer, a pair of raccoons. Also some elk.

For the Halloween season the zoo was decorated with, you know, comical gravestones and skeletons peeking around and giant spiderwebs. For the pandemic, the zoo was bisected, with chains and temporary partitions and other things to give the place a clear orientation and path. It wasn't far off the path we normally walk for the holiday lights, although part of me was bothered that it was pressed upon me. There were also a couple spots labelled the shortcut to the front of the zoo, or where to go to take another orbit around the park.

Also, it was kind of a busy day. Maybe not so busy as would normally be for a sunny, warm Saturday in late September but, really we would have been more comfortable going mid-week. There were a lot of people and while they never got close to us, it's still a lot of people. Also a couple areas were signed 'One Family At A Time' and people were not good about respecting that. At least once a family went ahead of us, too; I don't know if they didn't realize we were waiting, or didn't know what we were waiting for, or if they just didn't register that two people without a child were a family.

None of the indoor enclosures, the ones that have animals in December, were open. But then animals were out and on display, and since we were there in daylight, we could actually see the otters or the grey wolves clearly for the first time in ages. Also seen for the first time: Jaali, their baby black rhinoceros. He was born Christmas Eve last year, and was just about ready to be seen by the public when the pandemic started.

We got some nice views, for example, of the kangaroos; they have a couple red kangaroos, grey kangaroo, and wallabies. Plus some emus who hogged the front of the enclosure by the window. The red pandas were looking in good shape too. They also had the meerkats and banded mongooses and porcupines, in a couple enclosures that the centennial signs mentioned were built by the WPA and while seen as progressive for 1938 were now understood to be too small and not well-designed for most animals. Could be worse; they had pictures of some 1960-era enclosures that were just big rectangular concrete boxes, easy to clean but surely a nightmare for the bears and other large animals stuffed into them.

We spent more time than I expected in the farmyard exhibit, in good times the petting zoo, watching animals very like what we'd have seen at the petting zoos in an amusement park. Particularly they had a pair of Flemish giant rabbits, both with enormous dewlaps. This suggests they're both female, so, neat that they've got female rabbits together who like one another. There was also a rooster hanging around and we wondered what his deal was. He hopped up the fence and over to the adjacent enclosure, one with many more chickens and goats and whatnot, so I guess he just comes over and visits the rabbits when he's had enough of the local politicking.

We did look over the tiger and the lion enclosures and notice, particularly, the very steep drop in front. We wondered if in the past there might have been water at the bottom of the enclosure, maybe to make it safe to have an open-air viewing patio, rather that one protected by plexiglass walls.

The last thing we really saw were the spider monkeys, taking their feast of lettuce off to eat. This was fine enough to watch, but the kid in another family came over and declared they were boring, not even doing anything cute. Fun to hear. A bit later we overheard (the same?) kid explaining bat bites to their adult, that how a bat doesn't really want to bite you and if it does it's by mistake or maybe trying to be a friend. So

bunny_hugger had the honestly winning idea that zoos should sell an audio tour guide to their zoo, animals as explained by enthusiastic kids. If you're telling me you wouldn't pay six bucks to listen to eight-year-olds say everything they could think of about wallaby psychology, you're fibbing.

Our reservation time of 2:30 would give us two and a half hours before the park 'closed', which was just no longer admitting people; they wouldn't kick anyone out for another hour. We had finished a full circuit of the zoo by about 5:30 and, really, we could have used another two hours or so. We're like that. Might be worth making another trip sometime before the weather turns nasty.

On the way back we passed a house that already had a pumpkin, bale of hay, and a signpost for 'Spooky Street' and 'Ghoulish Garden' and 'Haunted House' and all that. Watching over all this was a mostly black cat who watched us with withering contempt. Nice to see a place getting so into the spirit.

So we'd gotten to the wooden roller coasters of Knoebels. What was next? 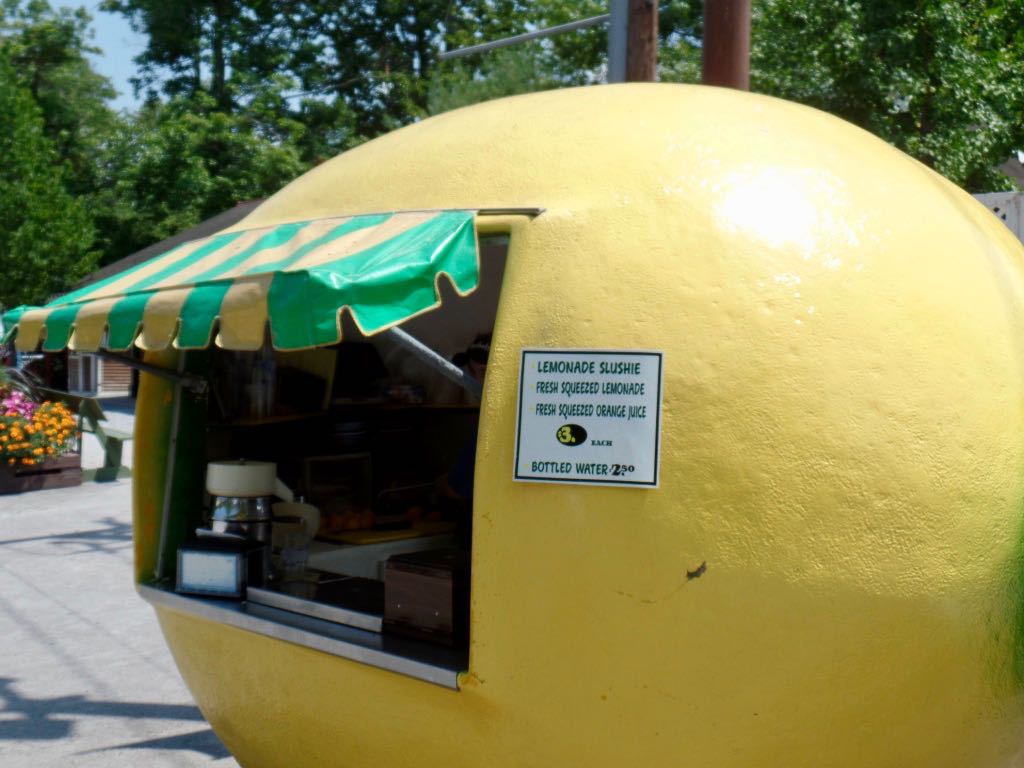 The lemon chill stand! It's another great bit of coffee-pot architecture and a reminder that Roller Coaster Tycoon can happen in the real world. 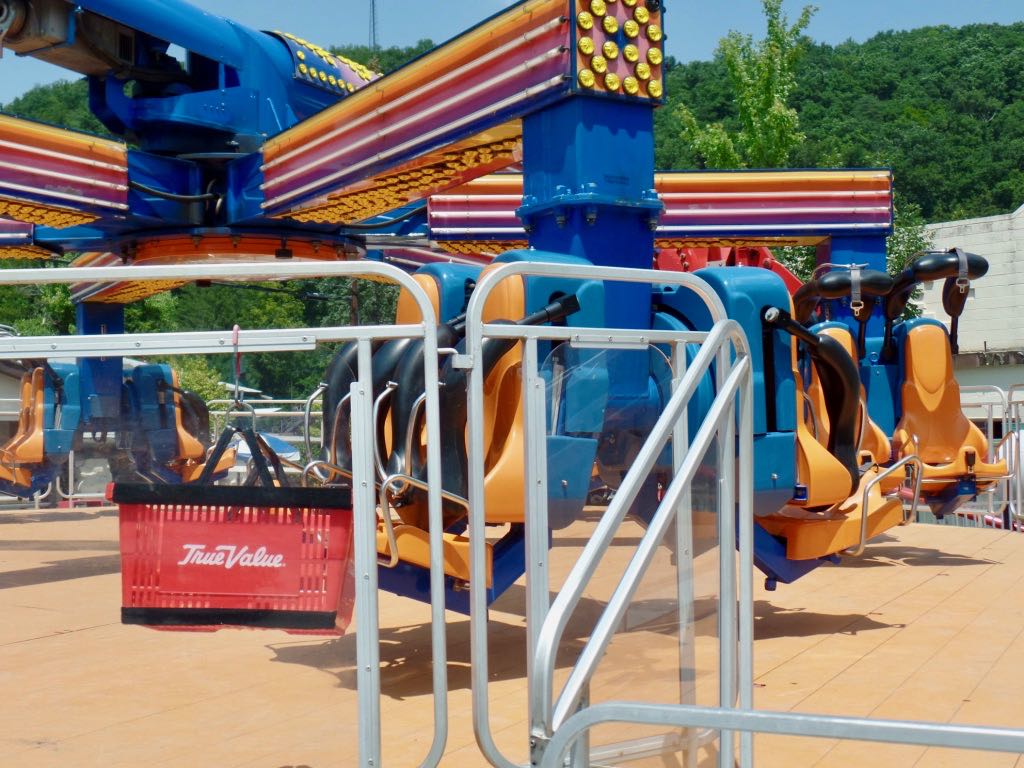 Somewhere along the way Knoebels snagged a basket from True Value hardware. 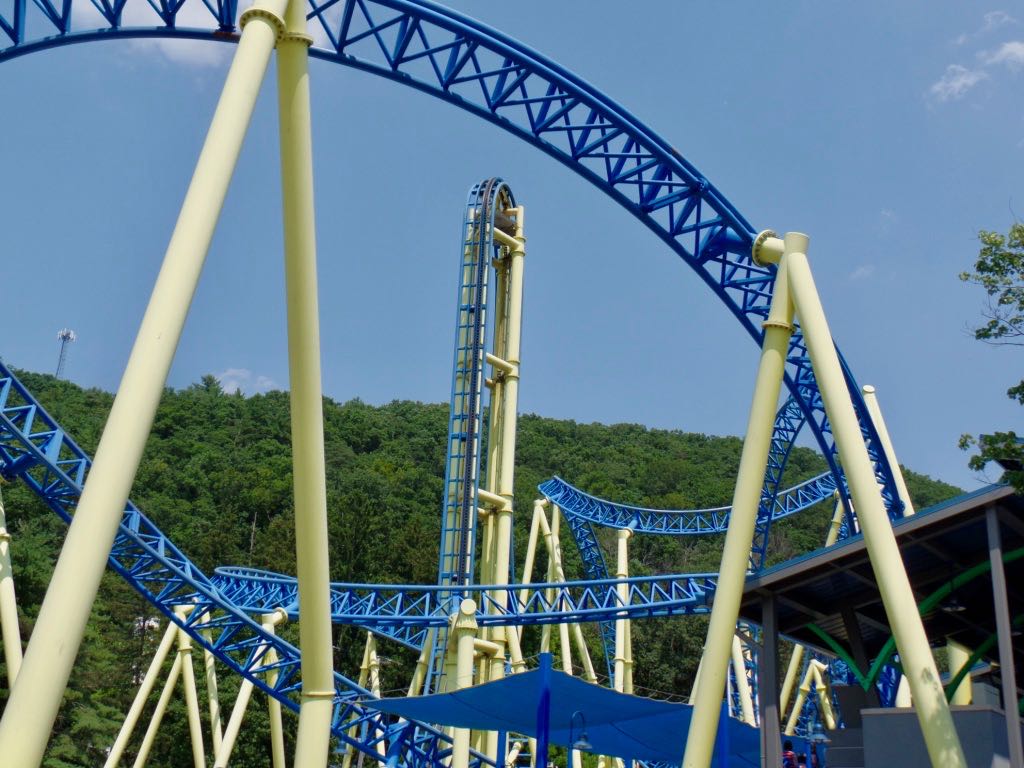 And here's a look at Impulse, and particularly its lift hill. 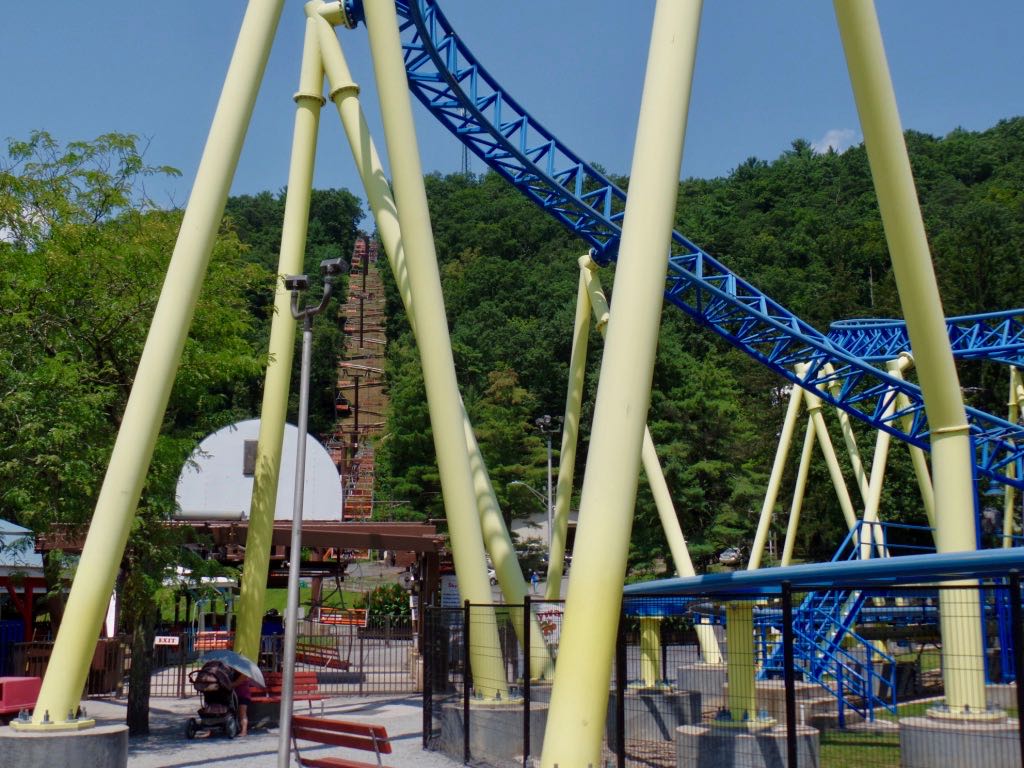 Approaching Impulse. In the backround you can see the ski lift chairs that lead somewhere we will never know as

bunny_hugger is not a ski lift sort of rider. 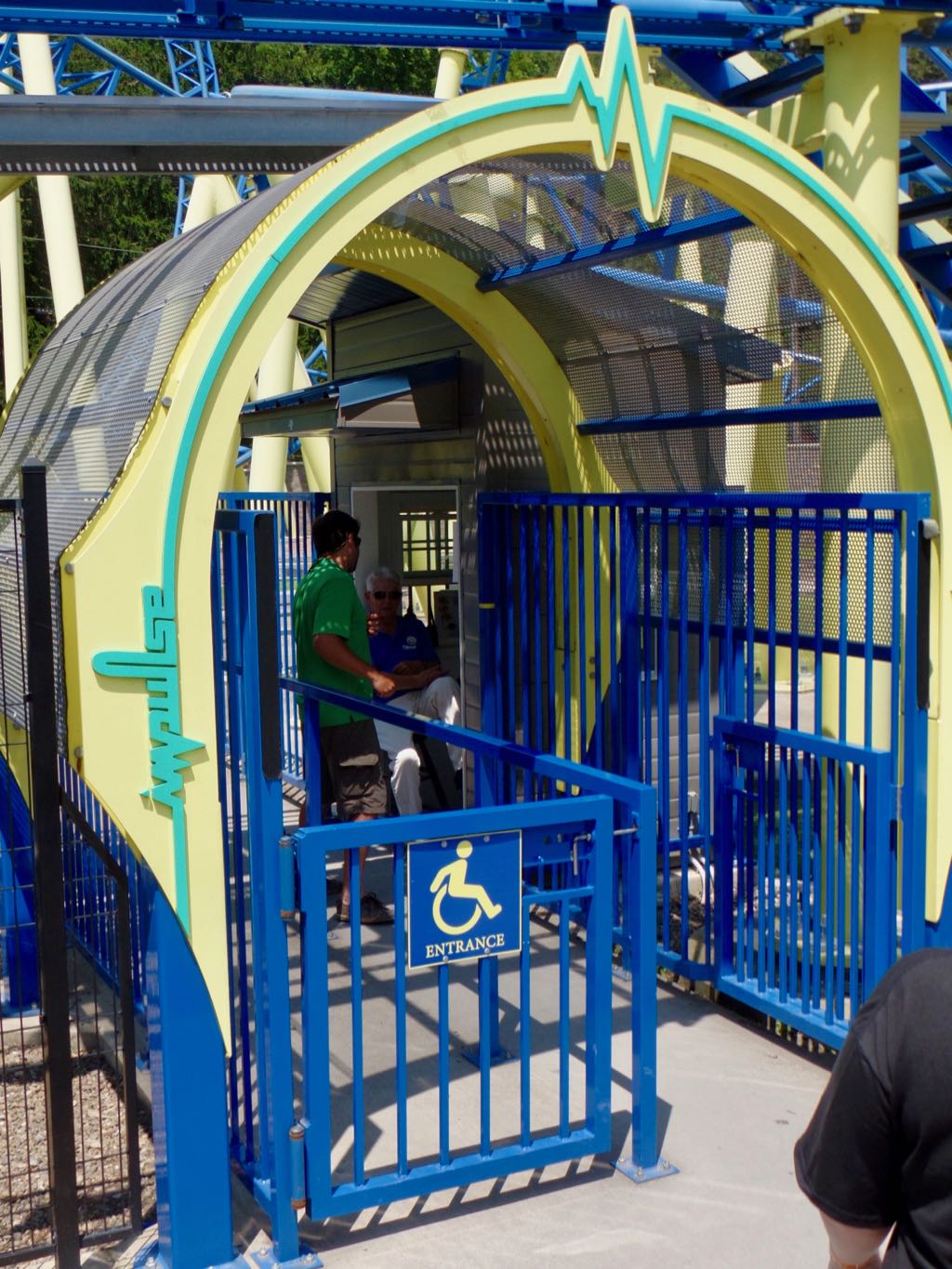 The arch leading into Impulse's queue. 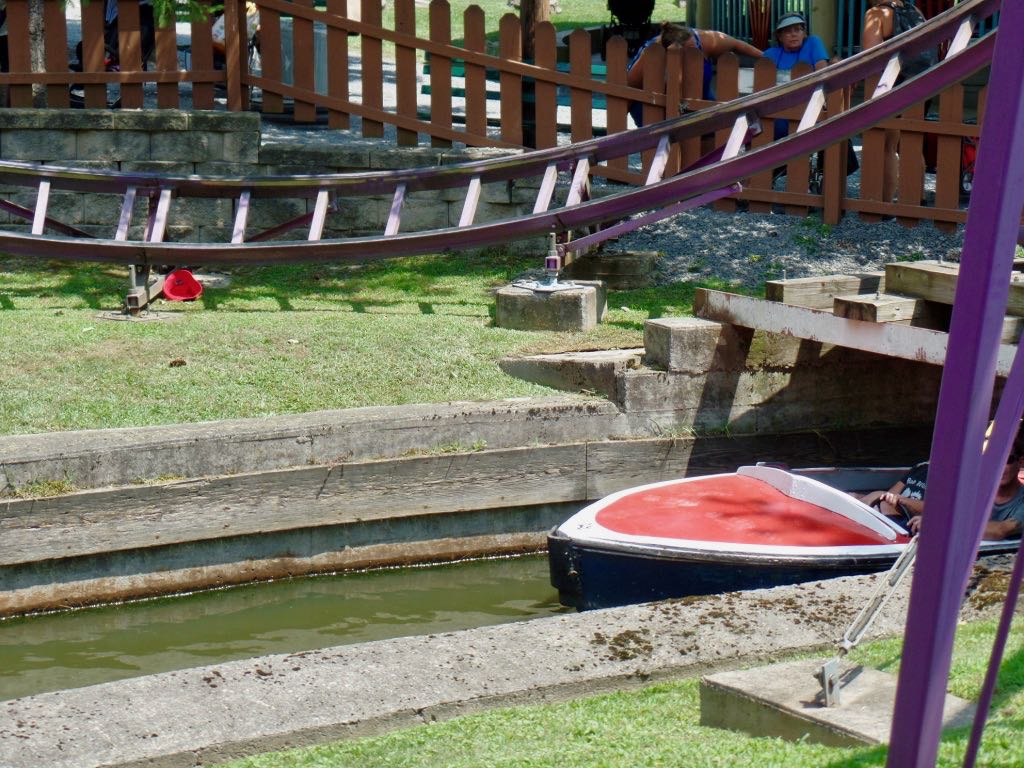 Kozmo's Kurves is the roller coaster in the background. It's the kiddie coaster, nothing too intense, but someone lost their hat. And there's the Motor Boats ride through a channel underneath it, which is a lovely little ride. 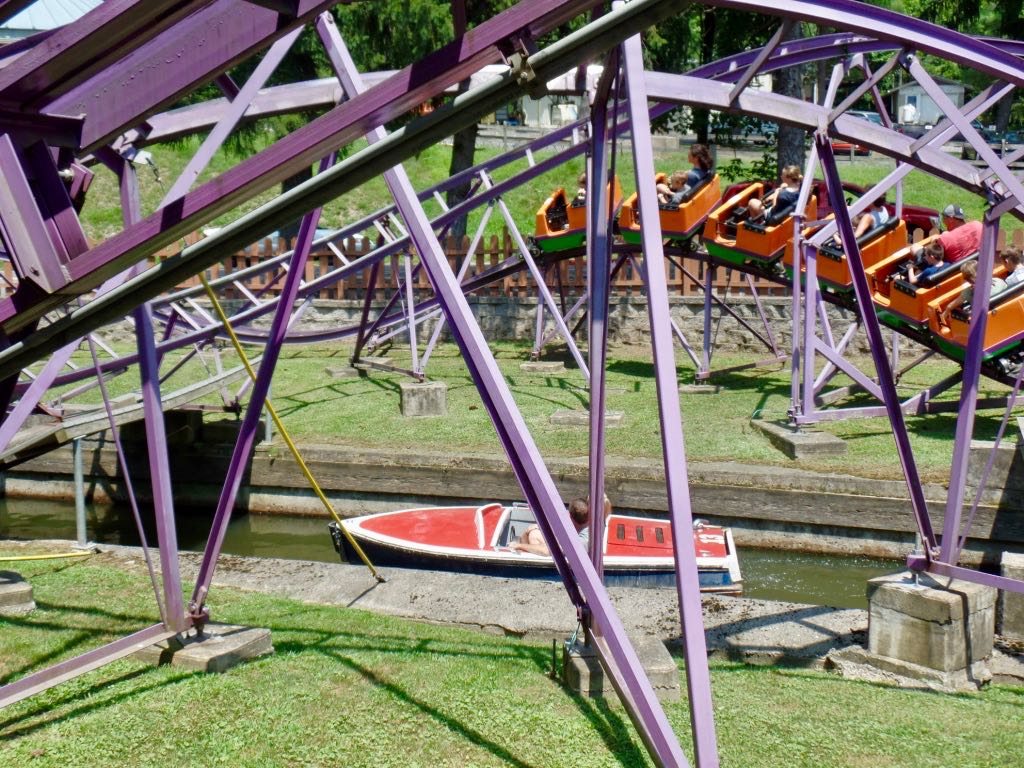 Kozmo's Kurves and the Motor Boats ride going past together. 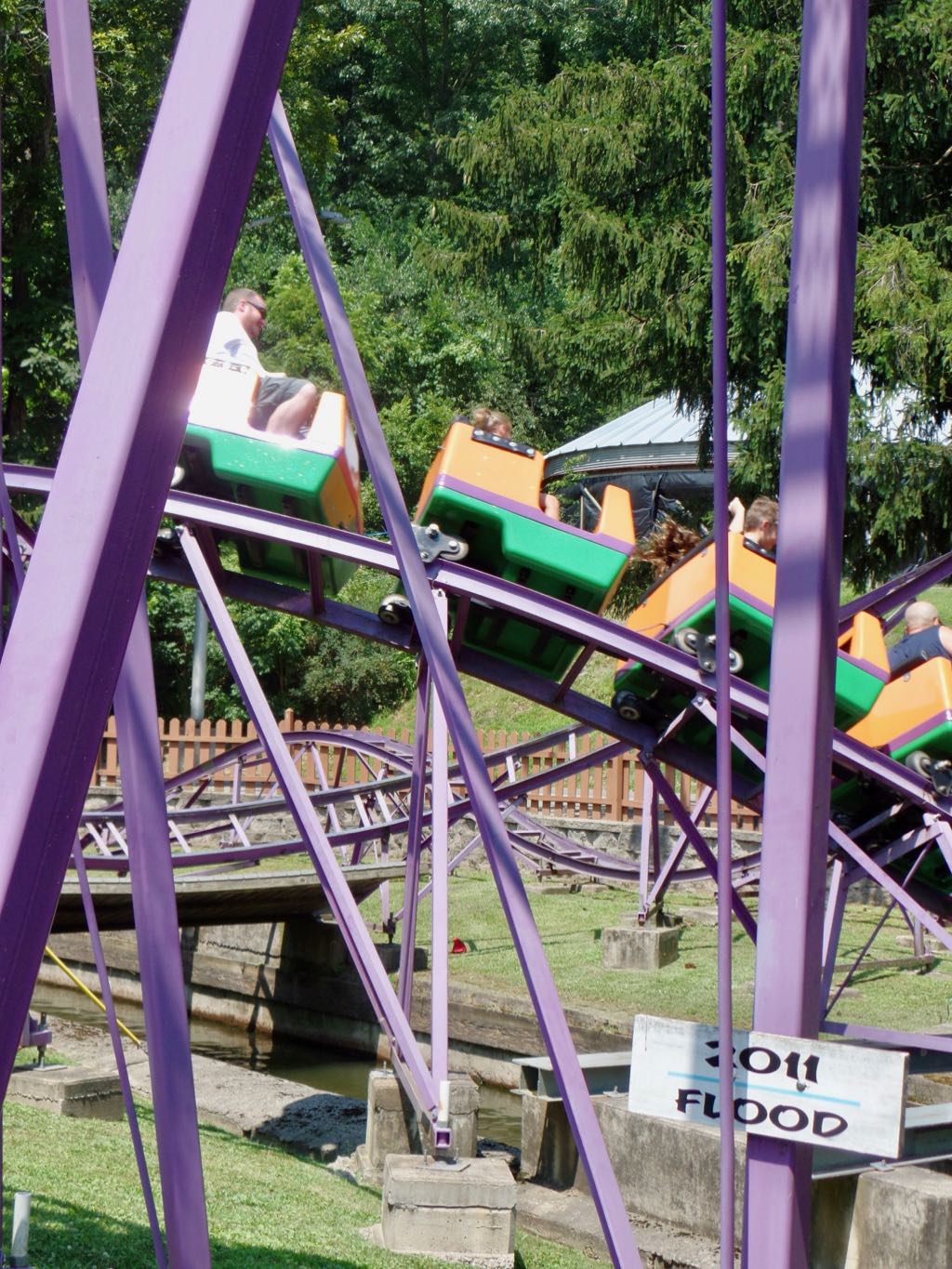 Kozmo's Kurves train and a high-water mark for the 2011 flood, the one that (if I have it right) gave us Dexter Raccoon's backstory. 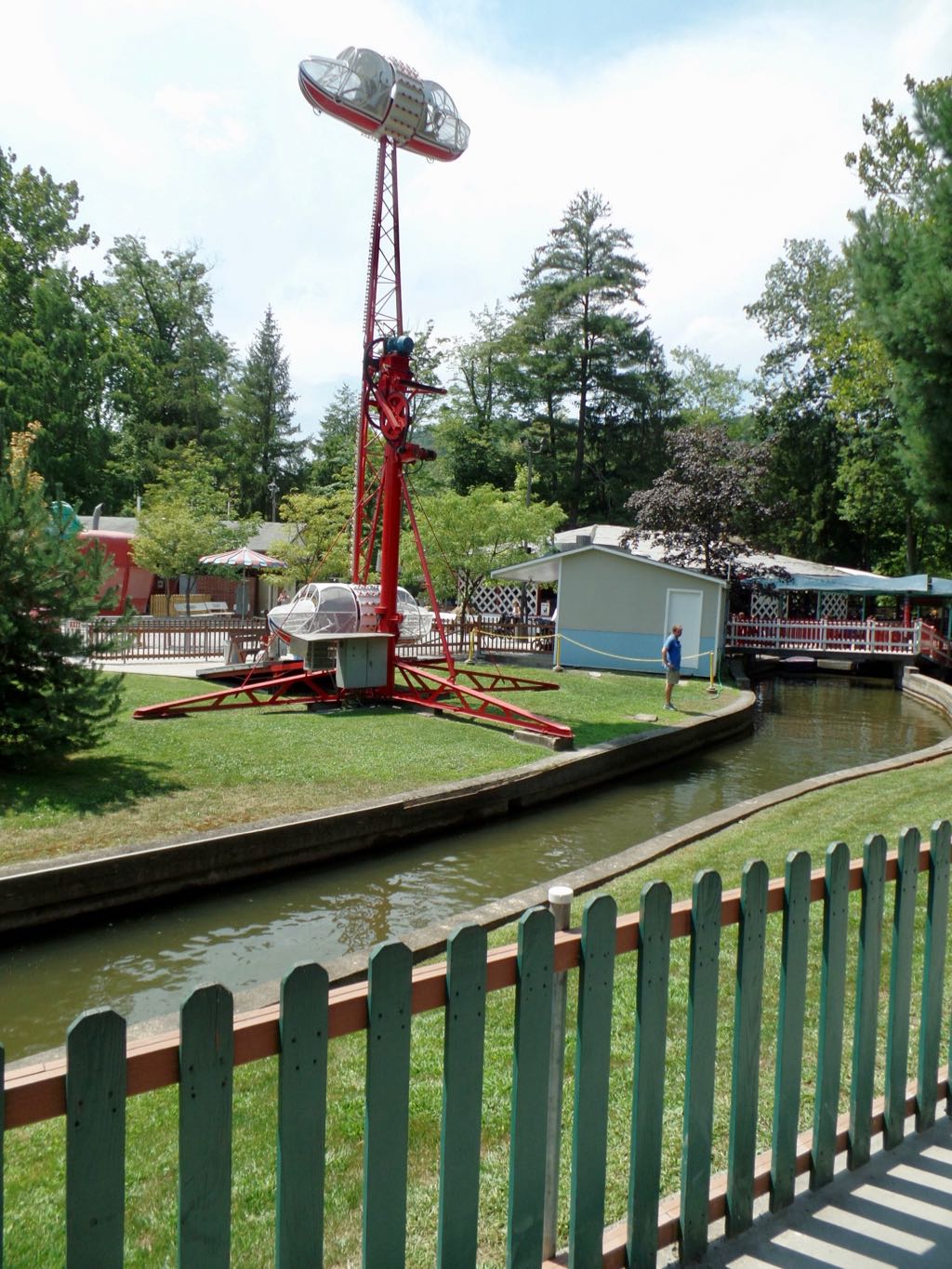 An Eyerly Roll-O-Plane. The once-common fairground ride only has a few instances left; one of the others was at Lakeside in Denver. There's one at Sylvan Beach Amusement Park, which we had been thinking about visiting this year. 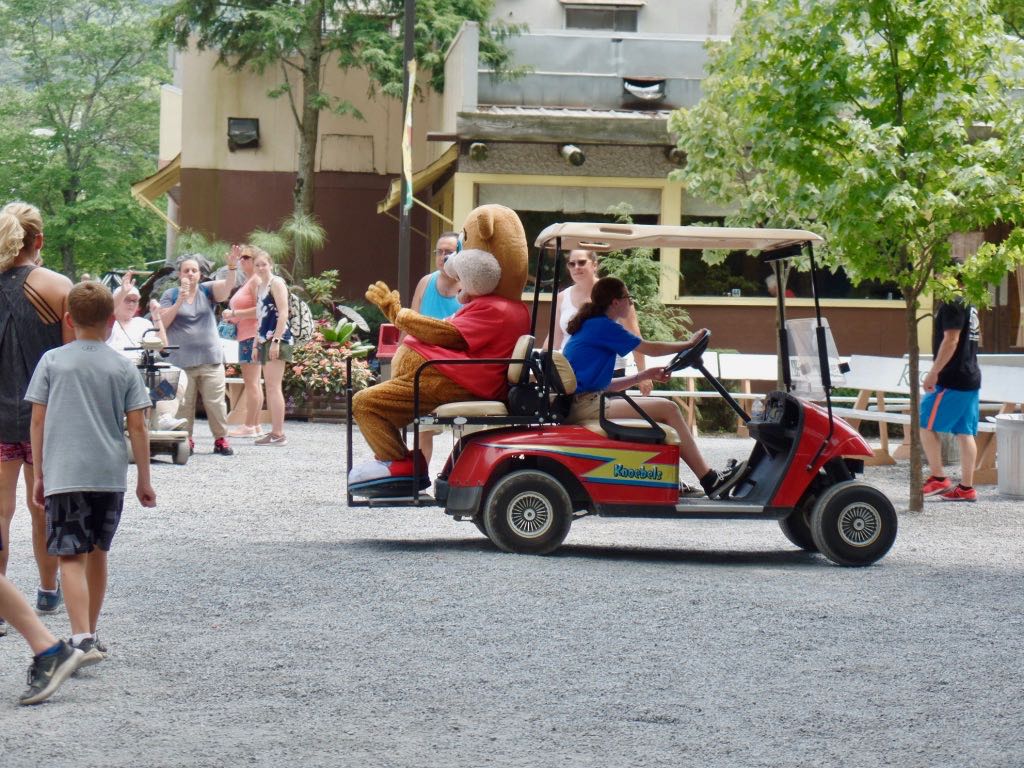 We sat down a while to get something to drink and who went by but Kozmo! He was strapped into the back of this cart to go off to some encounter; we don't know where. This was the best view I got of him. 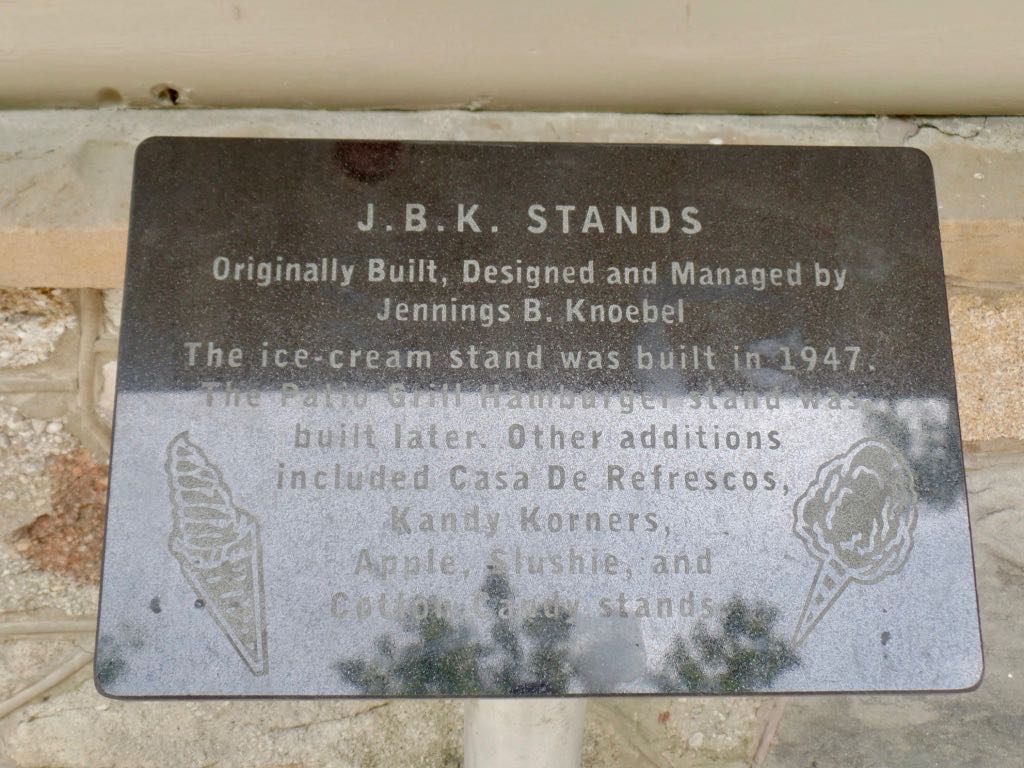 Another explanatory park, here for an ice-cream stand that goes back to before the Marshall Plan was a thing. 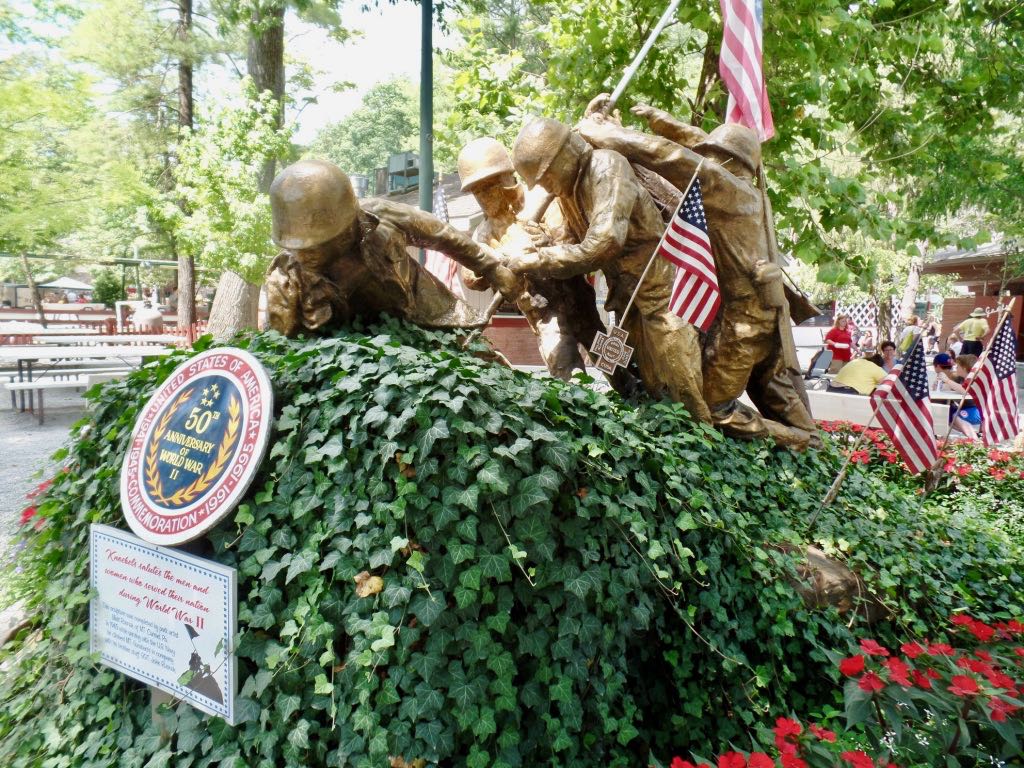 PS: Using my A to Z Archives: Proper, a quick useful word and a surprisingly short essay for me.