And so the conversation turned until the sun went down

Busy today; will report next week. On to pictures. Those are coming now to the end of our day at Knoebels. We didn't have much night time, as the park closed about 9:30, not very long after sunset even given that the sun just had to hide behind mountains. 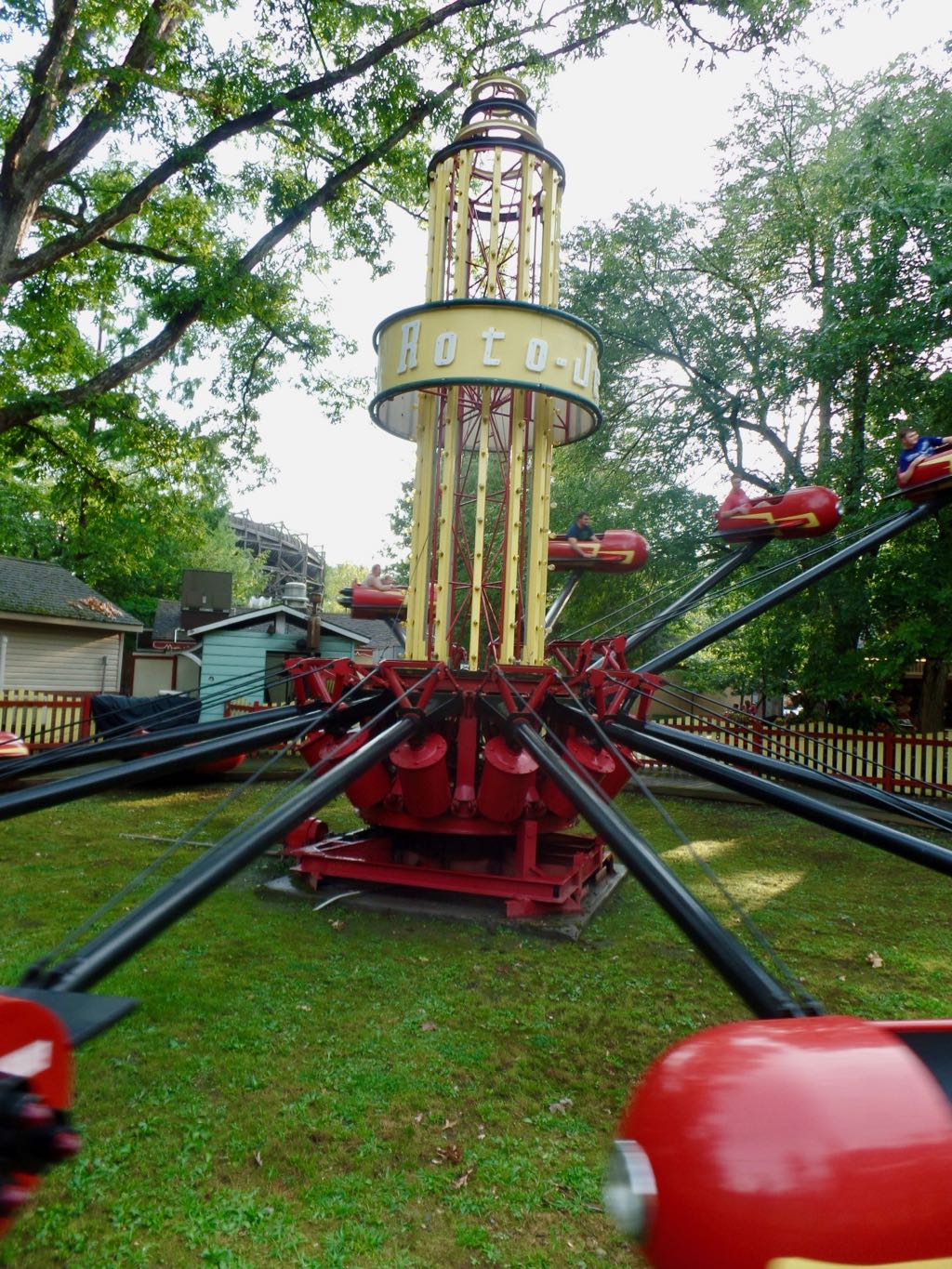 Knoebels's Kasper Klaus-model Roto-Jet. This fan site lists only four parks which as of 2013 still had Roto-Jets. We've been to three of them, and rode it at Knoebels and Lakeside. I don't believe we rode it at Hershey. But now that we know it's significant we'll be sure to get to it next time we're at HersheyPark. 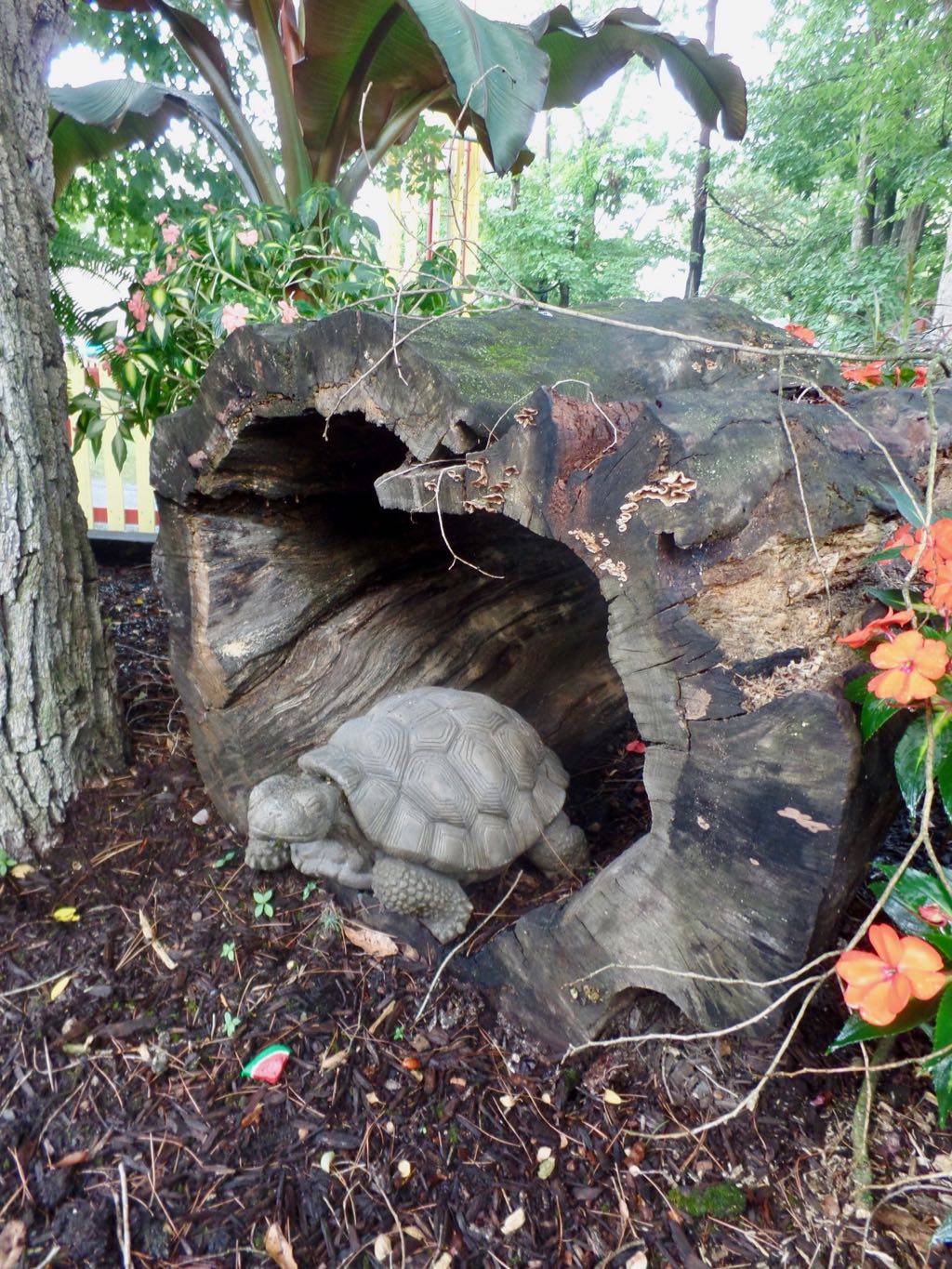 Scenery! A turtle statue crawling through a log. Knoebels doesn't have the abundance of sculpture that Waldameer has, but ... 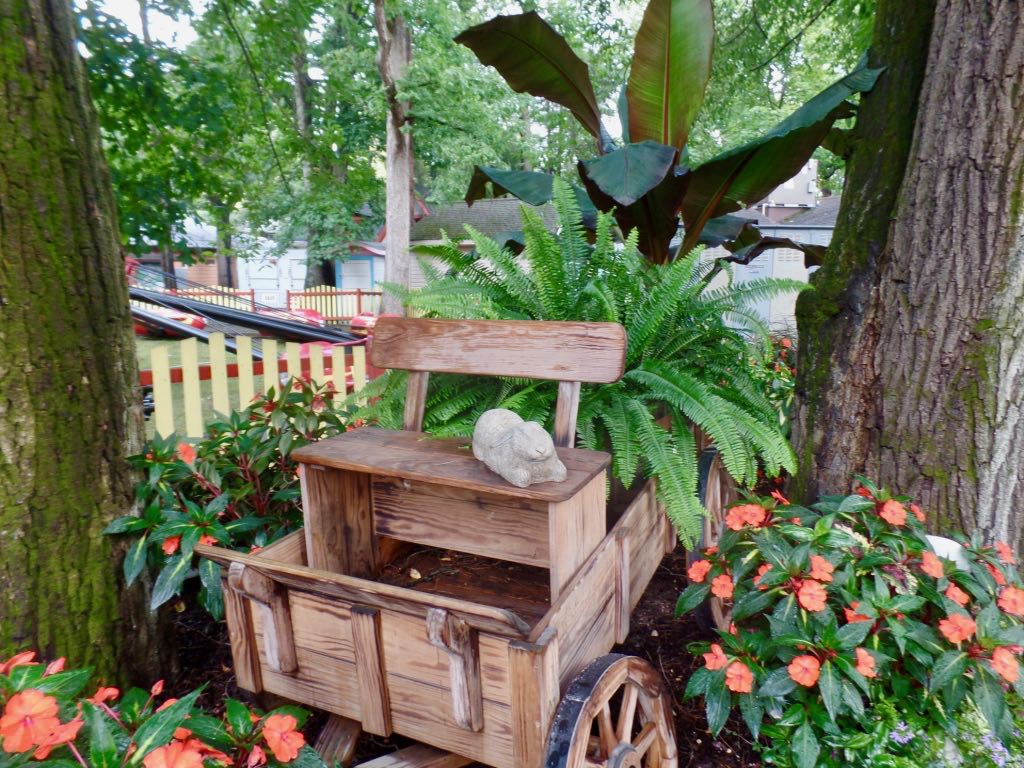 Yup, they have a hare to go with the tortoise. A relaxing bunny, at that. Hm. 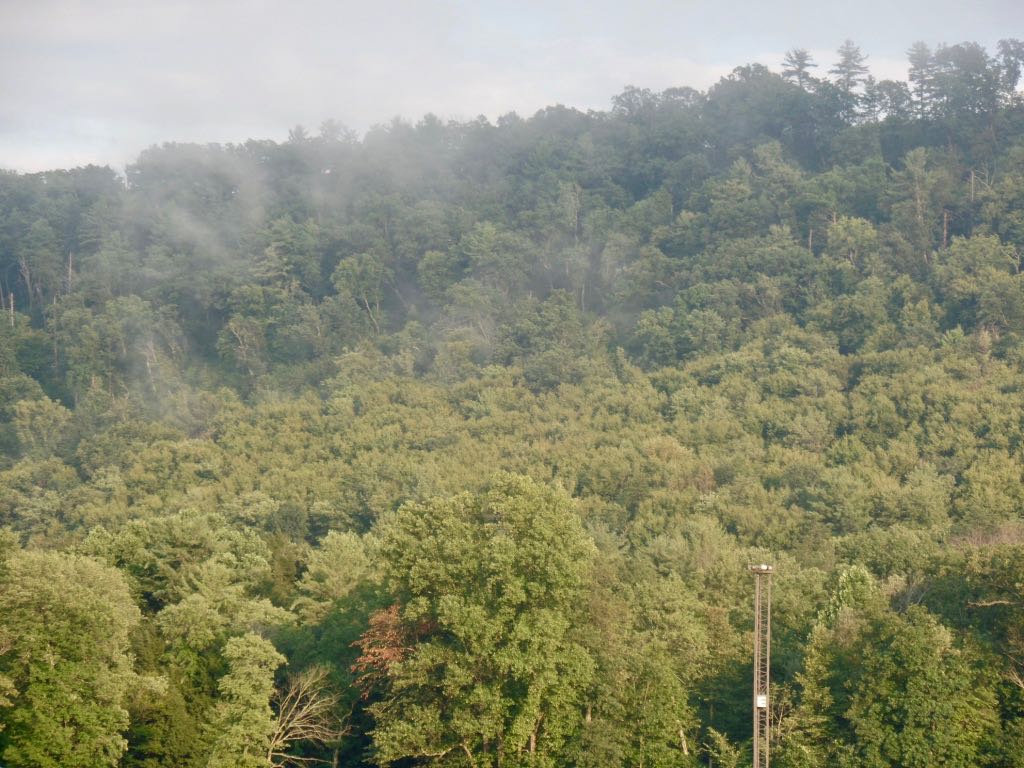 Knoebels, like most Pennsylvania parks, has the benefit of great hills all around it and here's a look up at them into the clouds left over from the rain. Note the drop tower in the lower right corner, for scale. 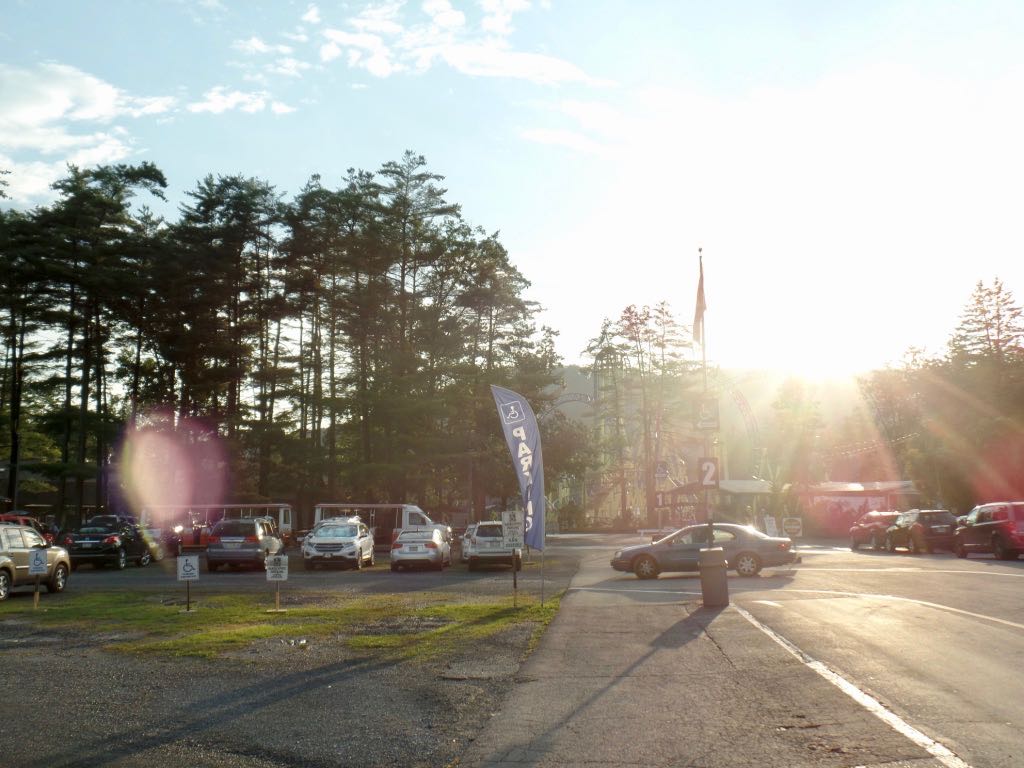 We'd popped out to the car for something and so got a look at the setting sun over the amusement park. 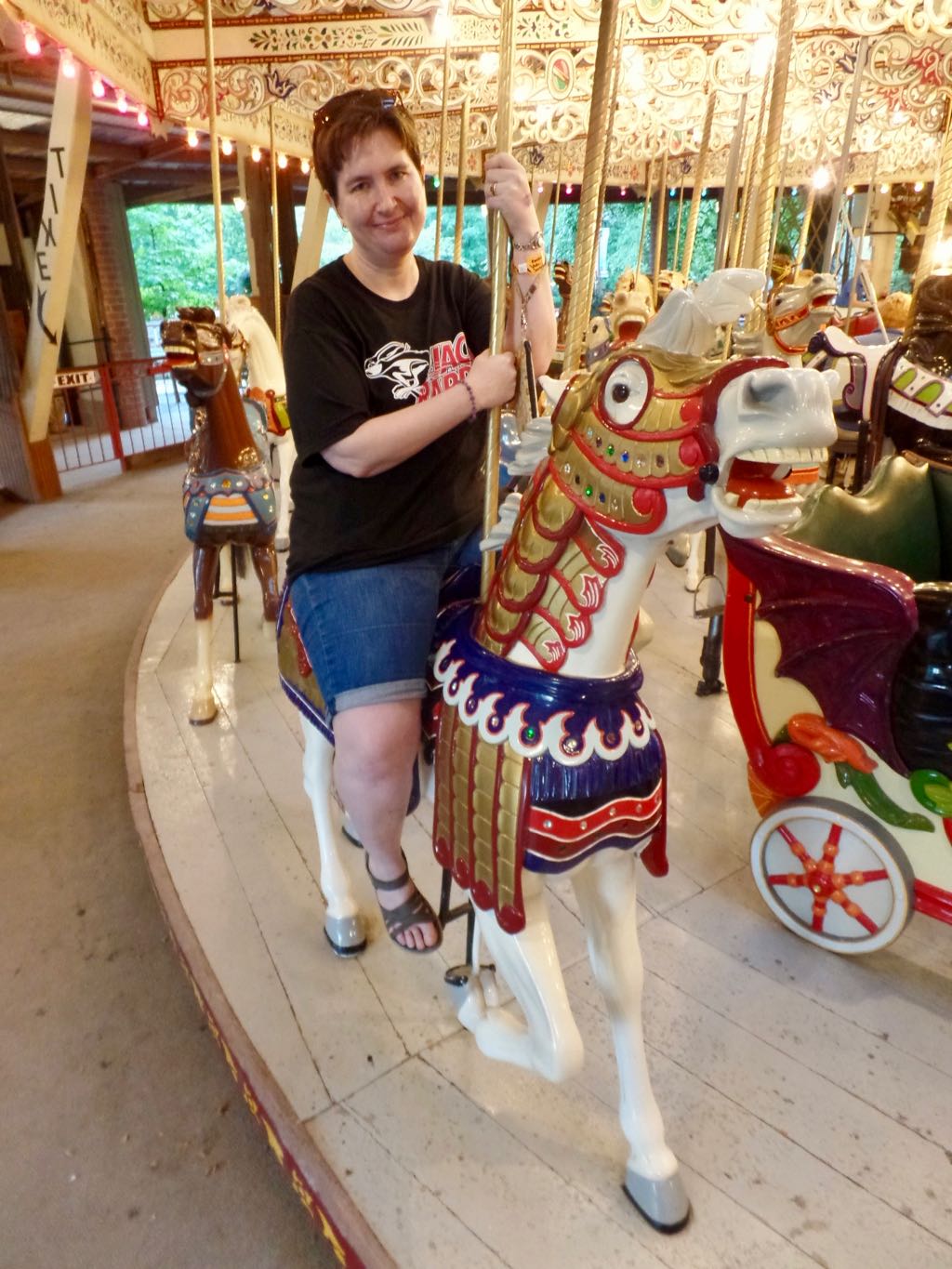 bunny_hugger getting a ride in on what I'll assume is the lead horse of the Grand Carousel. 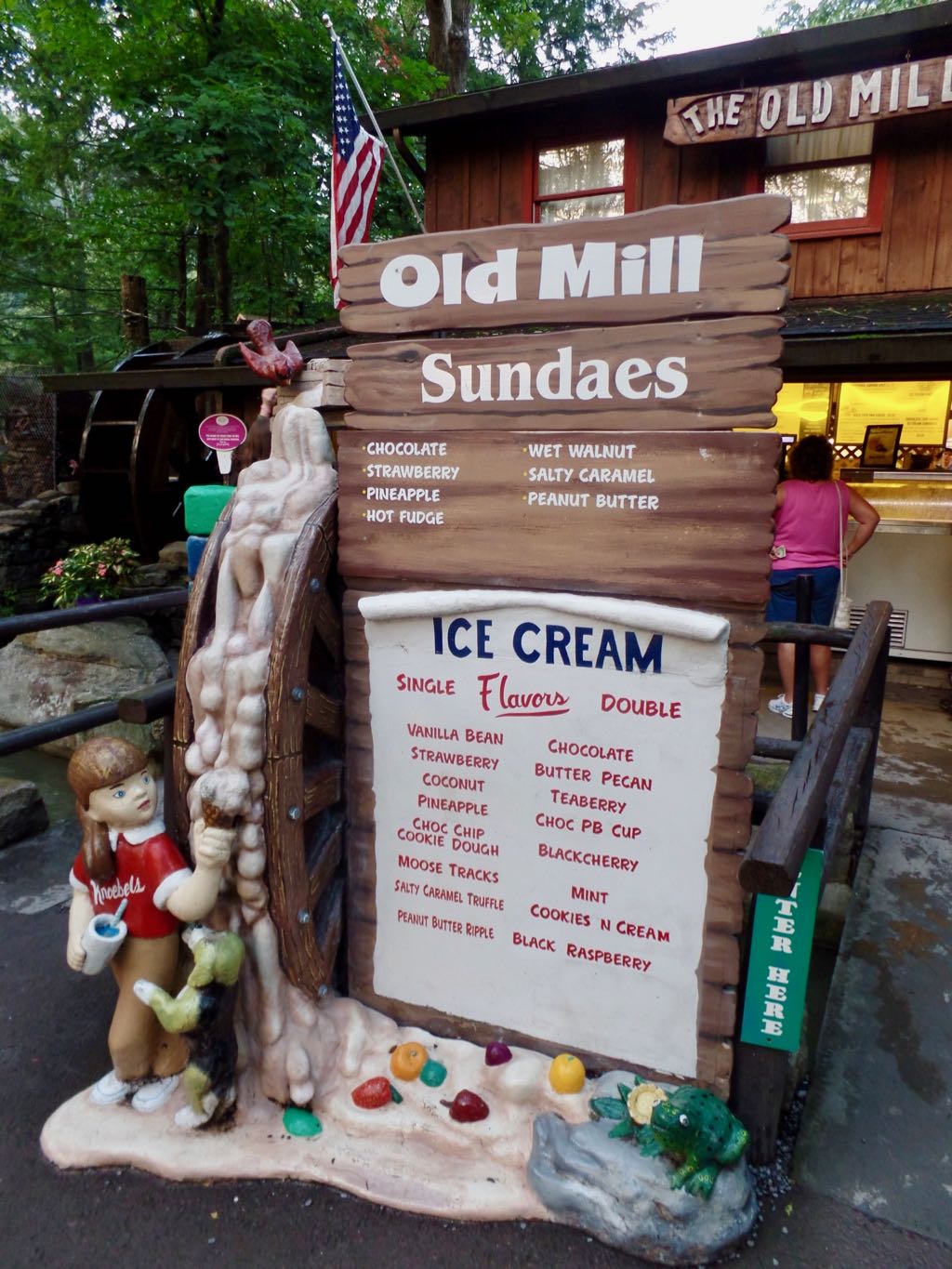 Menu, and sculptures, outside the Old Mill Sundaes. There is a water wheel on the creek and apparatus that transfers that energy to rotating the roof of an eating pavilion. 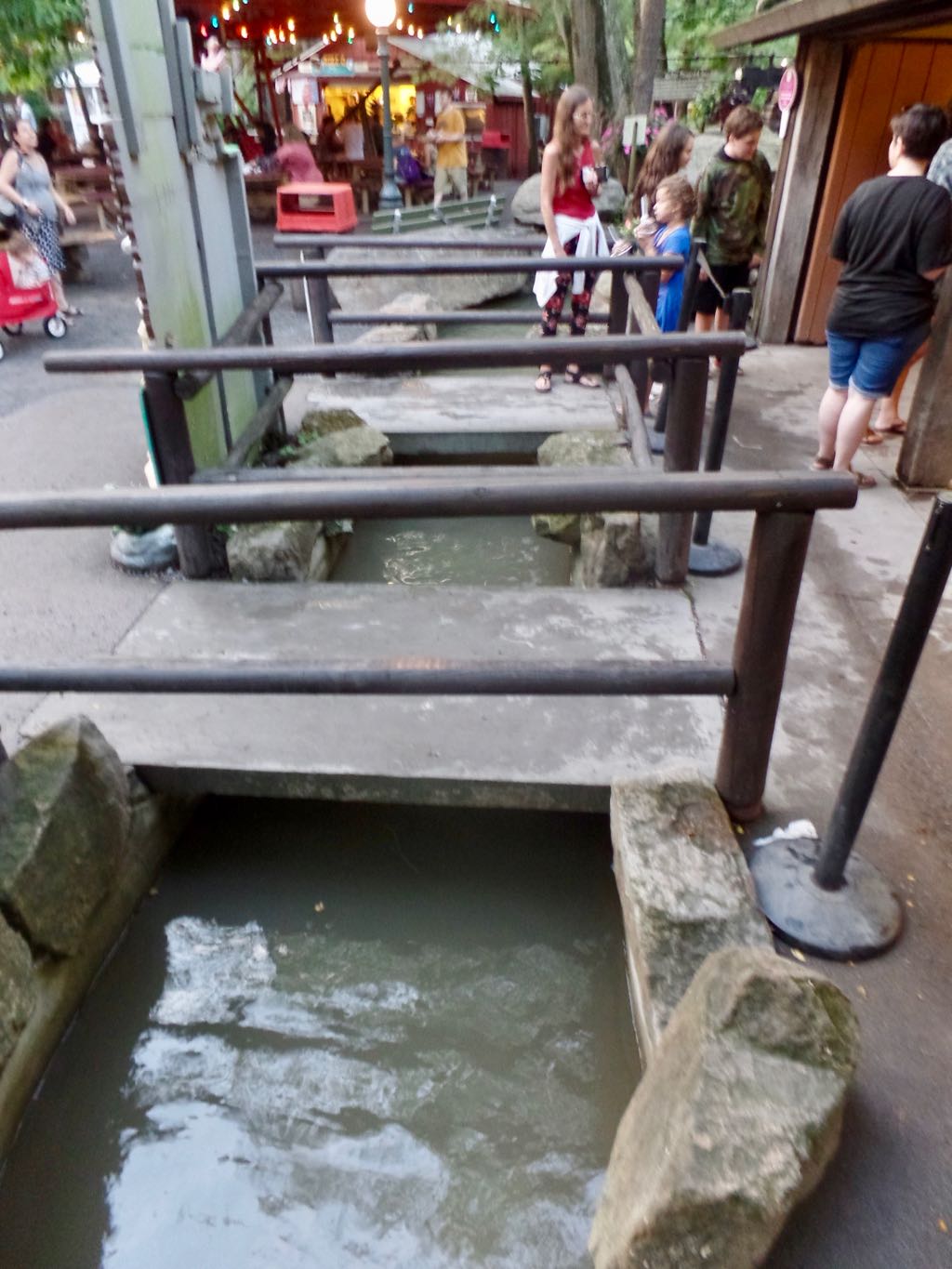 Also, you have to go over a slight creek as you go through the ice cream sundae line. In hindsight, you maybe understand why the park floods every 38 days. And here's the rotating pavilion, and a good bit of shelter from the rain. 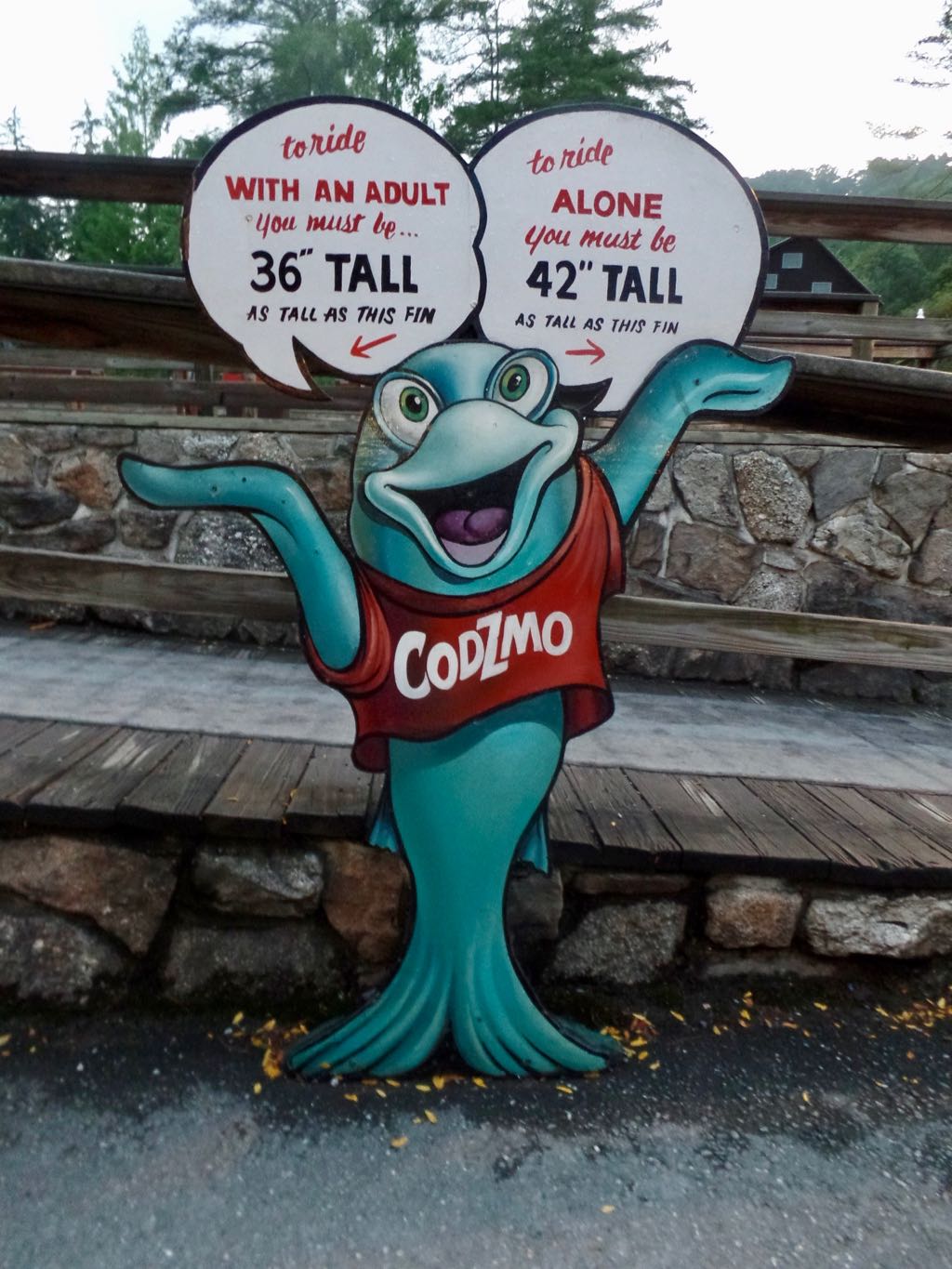 Kozmo Chipmunk appears outside most rides with a you-must-be-this-tall sign. For the log flume, though, he shapeshifts into Codzmo. 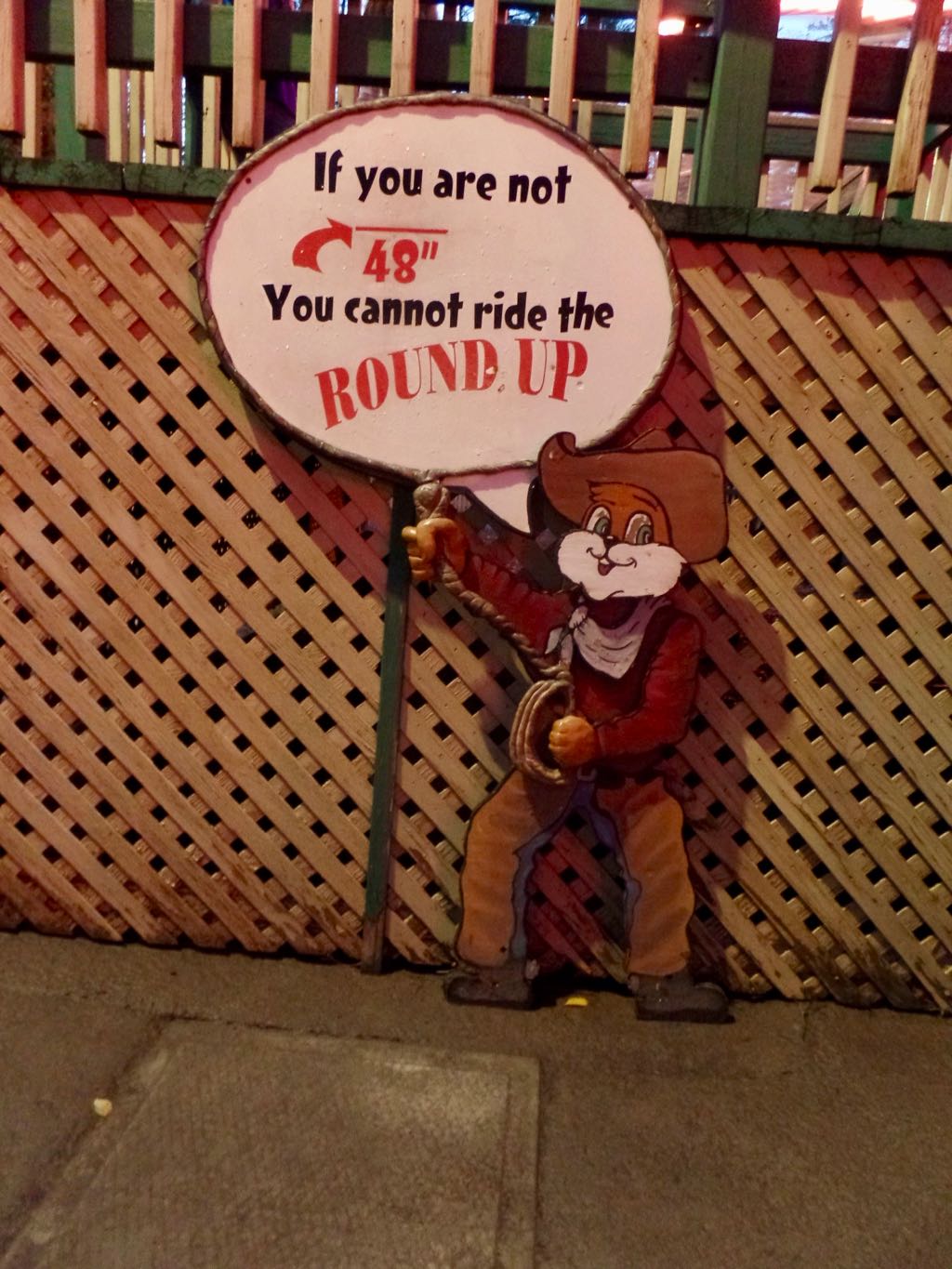 Here's Kozmo back in his normal body, but dressed up for the Round Up ride. 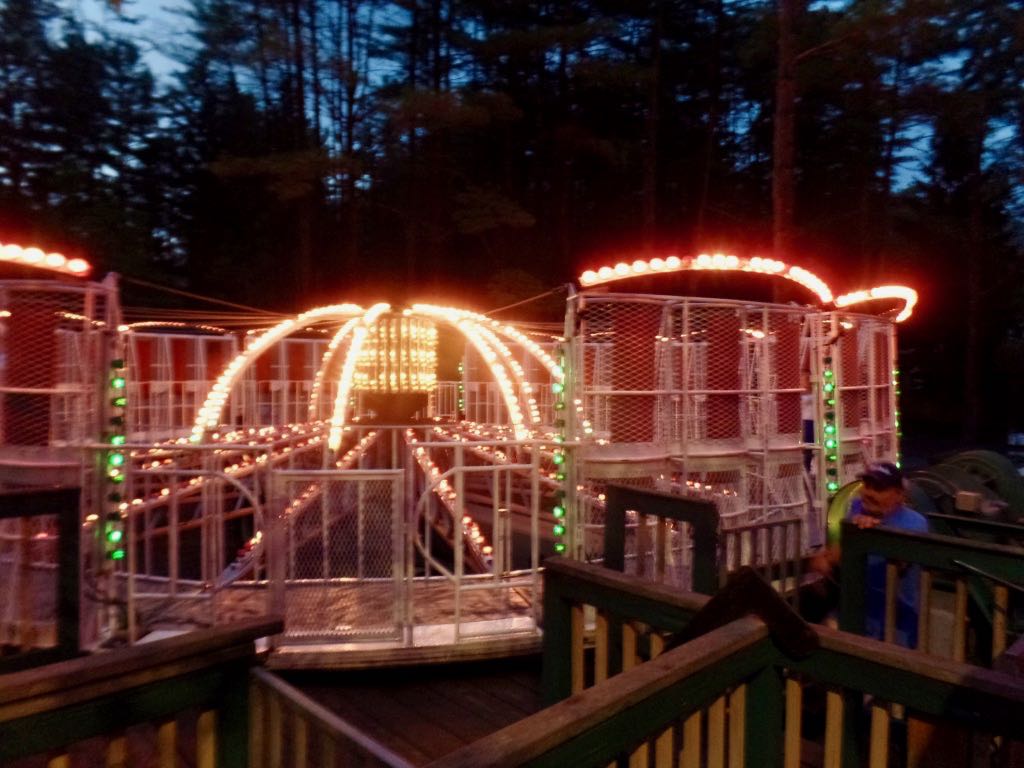 Round Up ride in the twilight, which MWS and

bunny_hugger were kind enough to humor me with by suggesting we ride. Phoenix as seen by twilight. Notice there's a little lighted crown at the top of its lift hill, on the left. 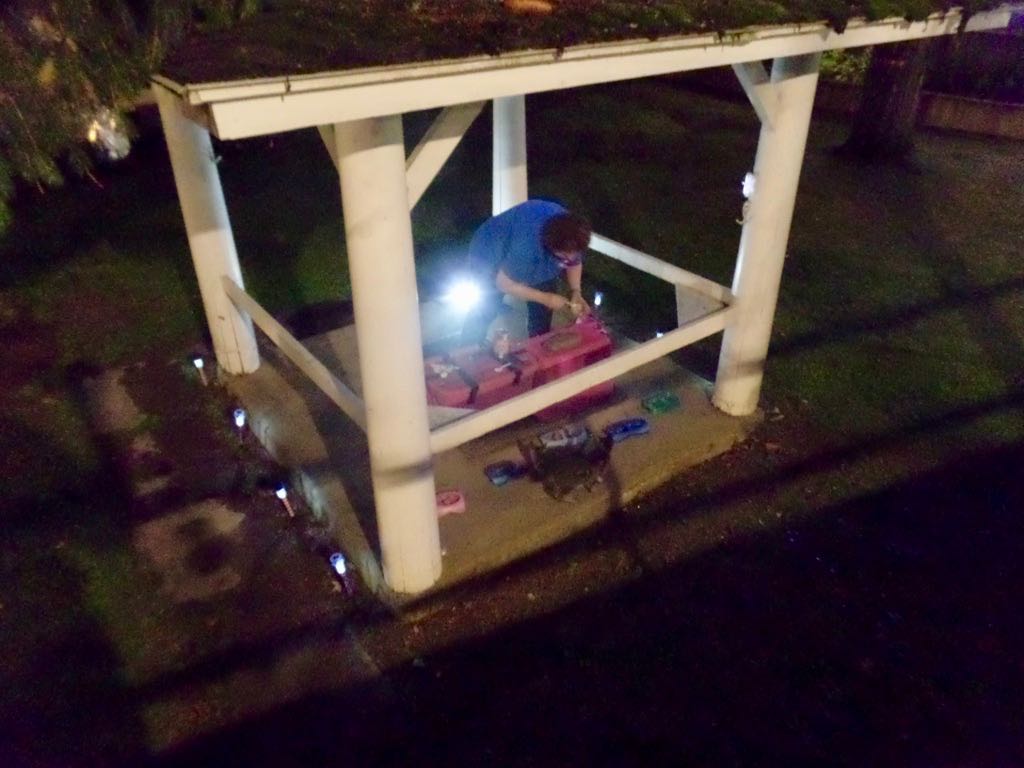 Spotted from Phoenix's station: a park worker trying to do something I could not make out, not from that distance. It doesn't seem like an exhibition but it's also a weird place to be doing legitimate work too.

Trivia: In the early 19th century Camden, New Jersey, was famous for its floating bathhouses anchored at Windmill Island, with patrons changing in unscreened accommodations visible to ferryboat riders from Philadelphia. (Windmill Island is, today, Soupy Island, which is not an island but has an antique carousel.) Source: This Is New Jersey, John T Cunningham.