If I'm not mistaken, as of a couple hours ago it has been 25 years since I first logged in to a muck (Brazilian Dreams II) as Austin Dern. That's a heck of a time to spend at anything. Thanks to all of you for being part of that journey.

So, the Switch. We did not have time to open it Friday or Saturday.

bunny_hugger was hard at work until the evening on Sunday too, when she finally dared open it. Would the joycons work, once taken off the base unit? Would the Wi-Fi work? The letter from United Radio said that we had a replacement unit, and that our user data had been transferred over. Also that they investigated and were unable to duplicate the problems. This is a lie, unless the know some way of ``take the joycons off the base unit'' that we don't know. Still ... so, would it work?

At least Sunday night, yes. The joycons worked when taken off the base unit, at least until they complained that they didn't have enough power. Given some time on the Switch to charge, they seem to behave all right. The Wi-Fi, too, seems to be working. It connected to our home network promptly and loaded the big fall update to Animal Crossing. When she started the game up,

bunny_hugger had the game's e-mails, and it reported friends being online, and it just ... played, like it should. Also all her residents talked about how she had vanished and they missed her so, which is an unwelcome guilt trip considering it's not like we chose to leave the game abandoned on a shelf in East Syracuse for a month.

I am not calling this fixed. Not until we have a track record of good behavior from what does appear to be a new Switch. But it's a hopeful start.

Meanwhile today, my iPod Touch crashed and died so hard during my walk that it would not come back at all. It's been doing this a lot the last two months. This weekend I tried a factory-reset wipe-and-reinstall, and that did nothing. I also tried taking it out of the protective Otter Box in case that was setting off issues and, no, apparently not. The Capitol Mac people had recommended using Sketchy iPhone Fixers out in Okemos and I think I'm going to go check to make sure I know the name of the place right and see what they'll do. But, like, replacing this with a brand-new iPod Touch would only be $200; there's a limit to how much repairing would make sense. Also a limit to how much energy I have for repair shenanigans, although I suppose if it's a place in town there's a natural upper bound to that.

The day after Knoebels we drove west, hoping to get to two parks in one day. The first park was DelGrosso's, in Tipton. Yes, as seen in the famous syndicated newspaper comic strip Take It From The Tinkersons. 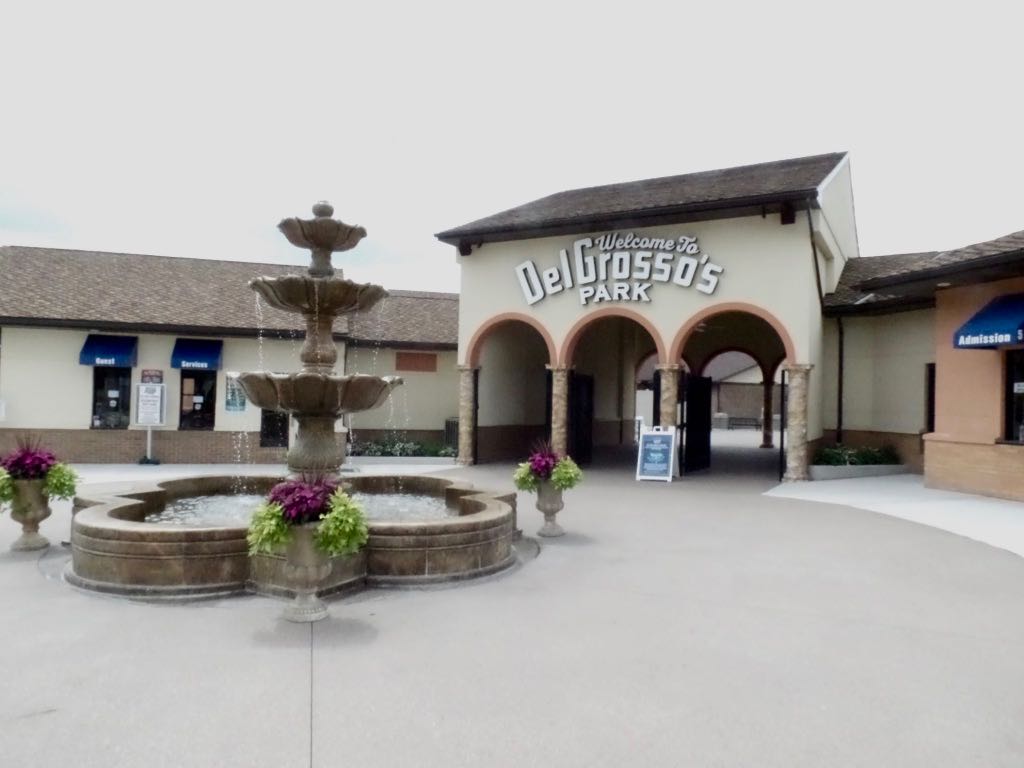 The new-to-us entrance to DelGrosso's Park. It got a major facelift when the Laguna Beach waterpark got a big expansion, since the last time we visited. I'm sorry it's washed out. I had forgotten to change the camera settings from the super-sensitive low-light modes I used at the end of the day at Knoebels. 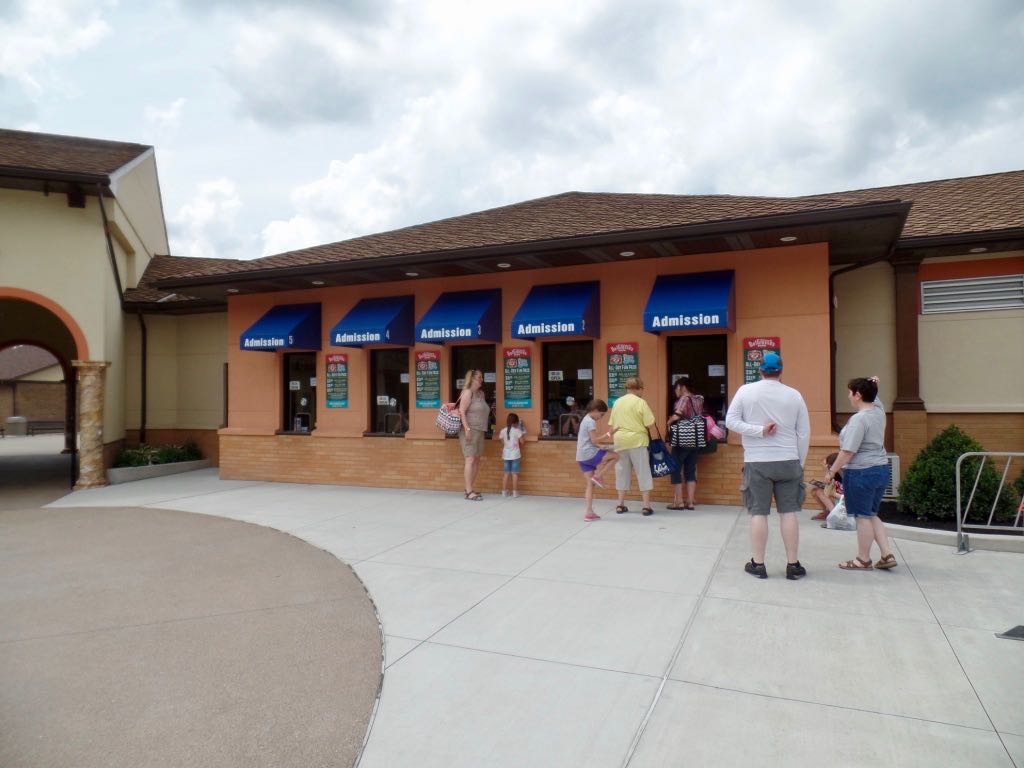 Here I get the sensitivity appropriate for early afternoon so you can see what the colors should be. I'm surprised I didn't re-photograph the entrance gate but, mm. 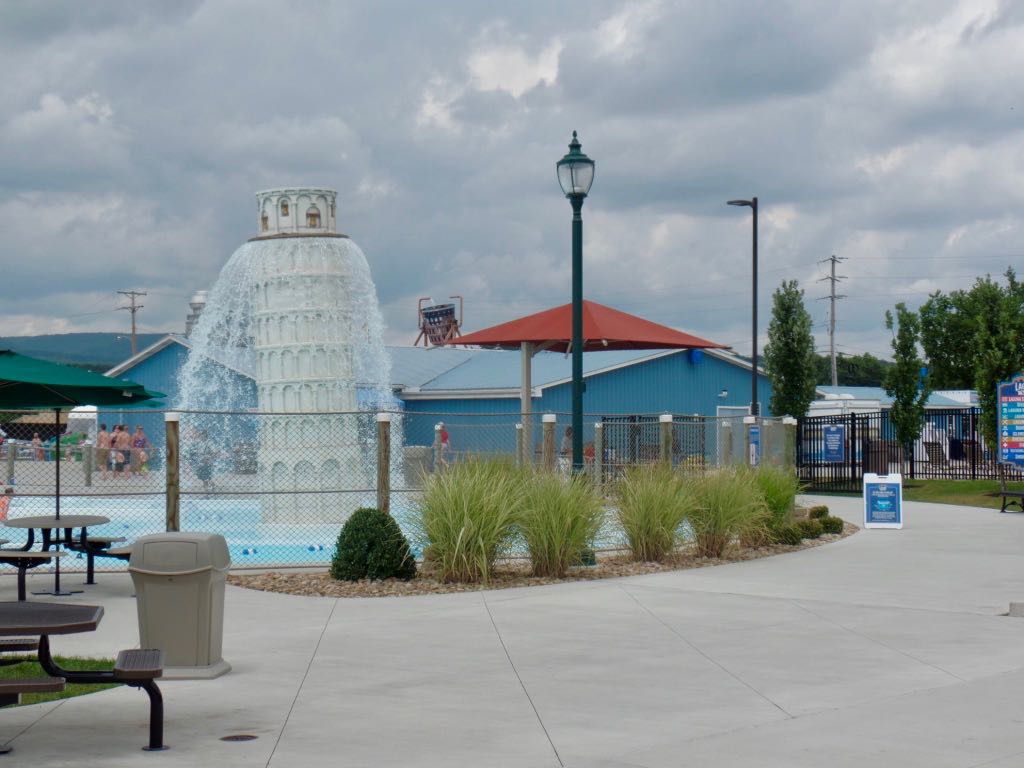 Part of Laguna Beach is this Leaning Tower of Pisa waterfall. 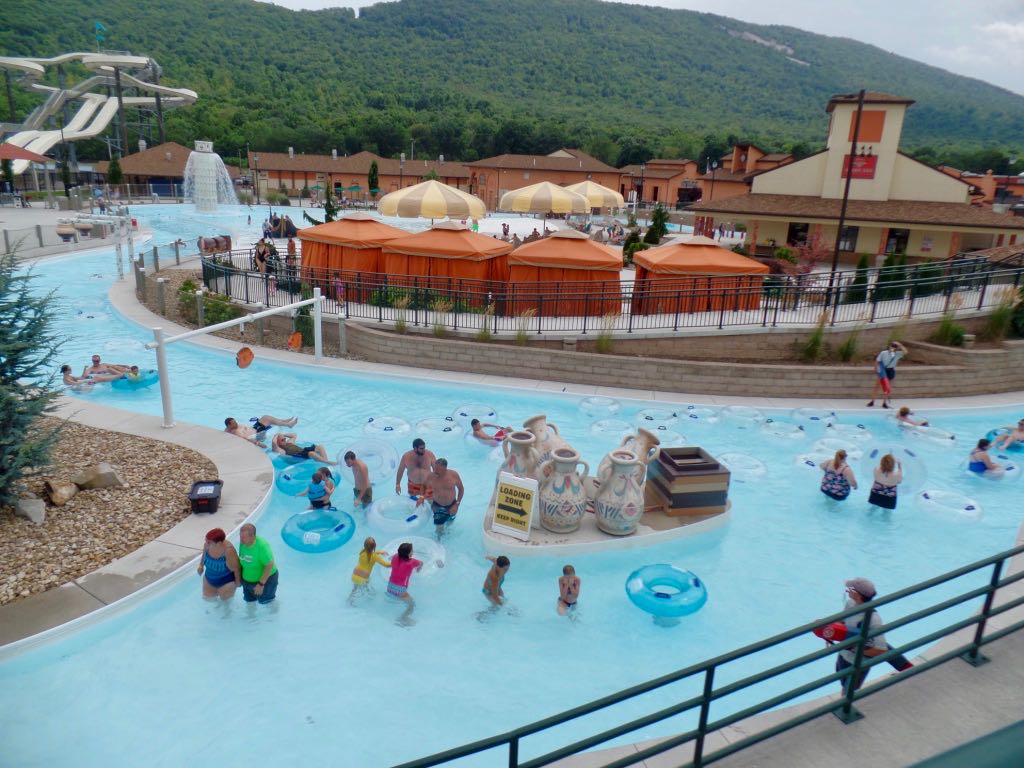 Some of the Laguna Beach water park as seen from the elevated walkway to DelGrosso's. 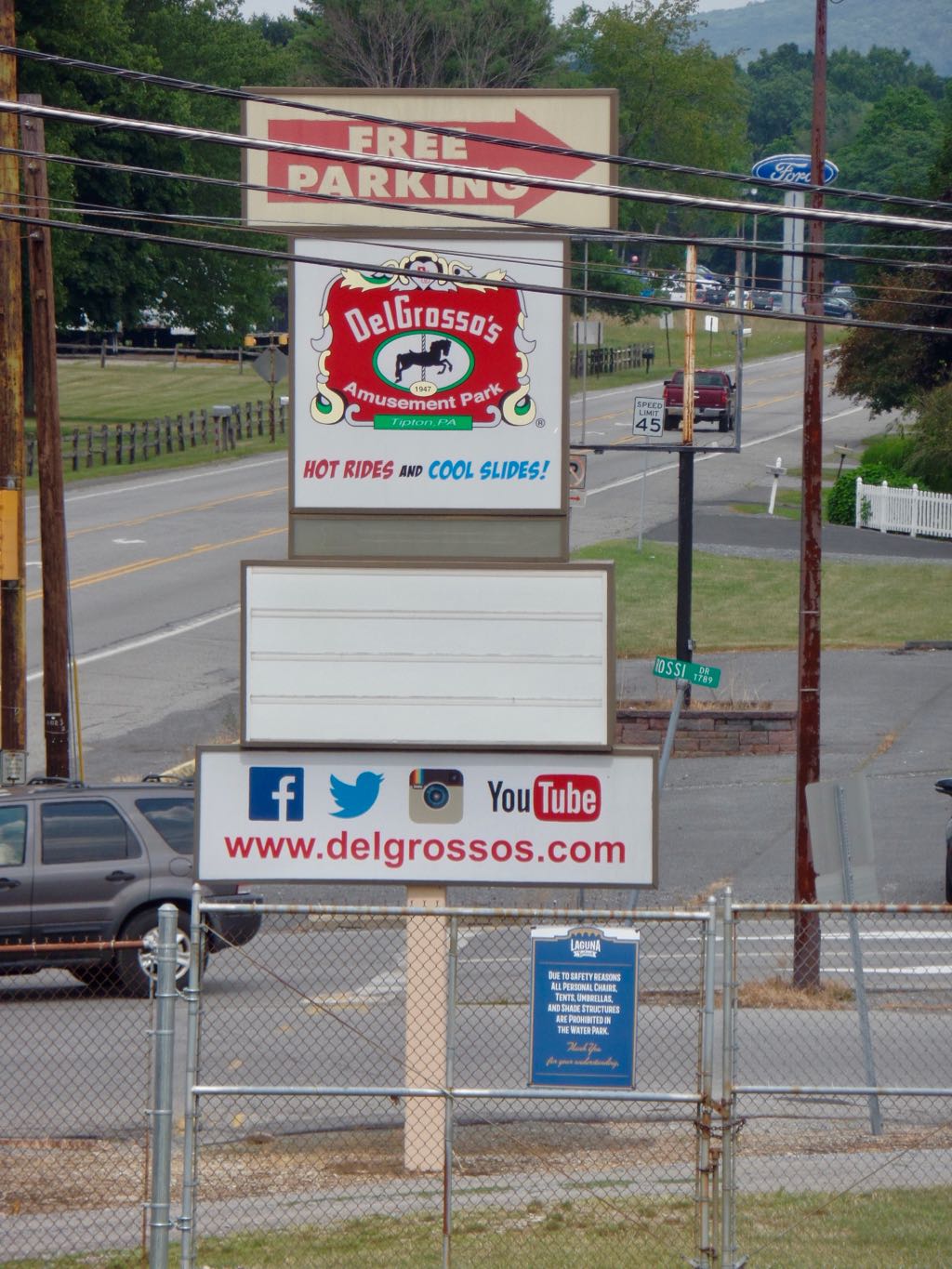 Free parking! DelGrosso's is ungated, but the parking lot is across a busy road from the rides park so that's why there's a pedestrian overpass. 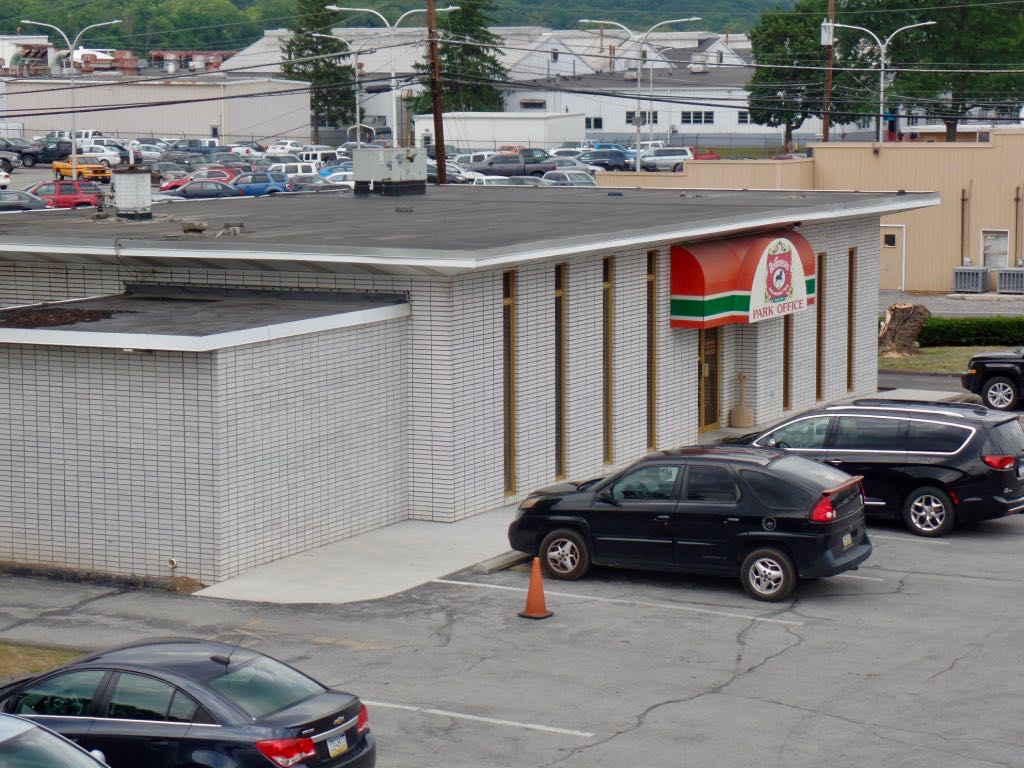 Looking down at the Park Office, where you can do ... park business, I guess ... as seen from the pedestrian overpass. 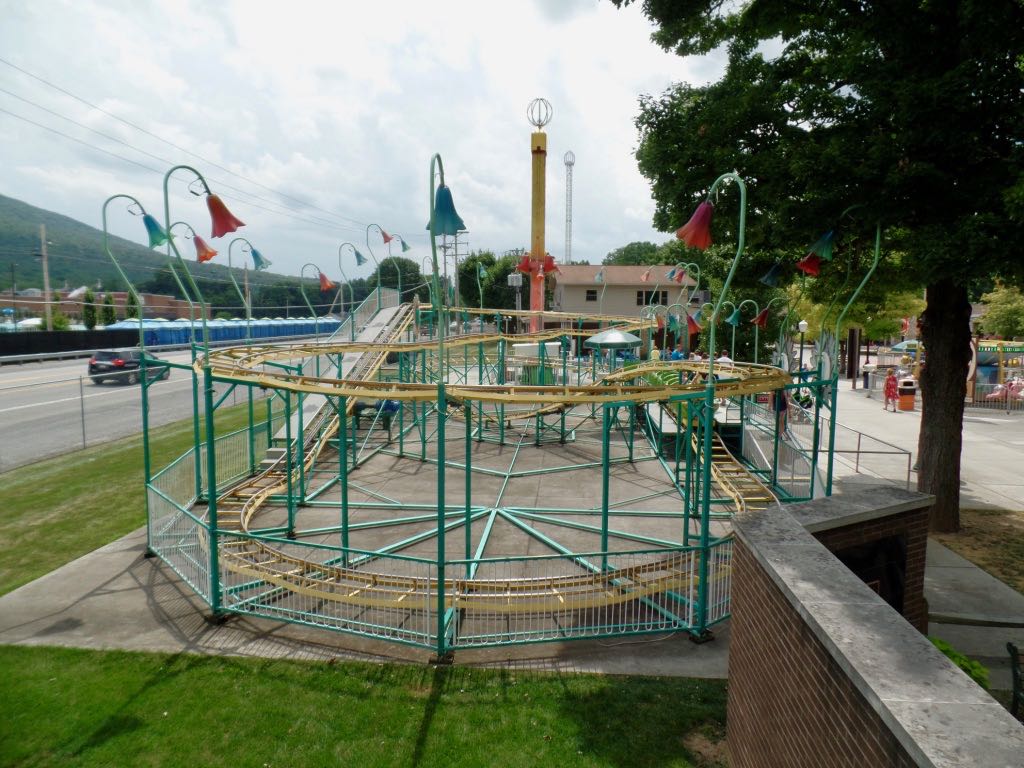 Wacky Worm kiddie coaster, twin to the one we rode at Fantasy Island, although this time we didn't ride it.

bunny_hugger and I did ride it when we visited in 2013, though. 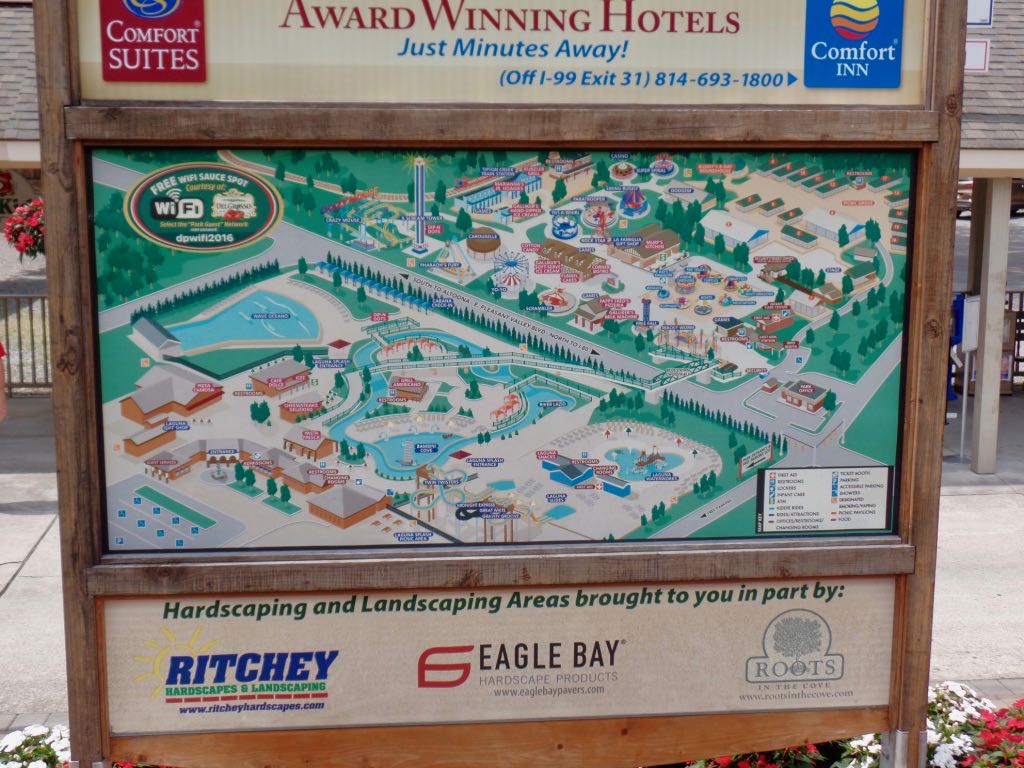 Photograph of the park map, since there were no park maps given out to my knowledge. 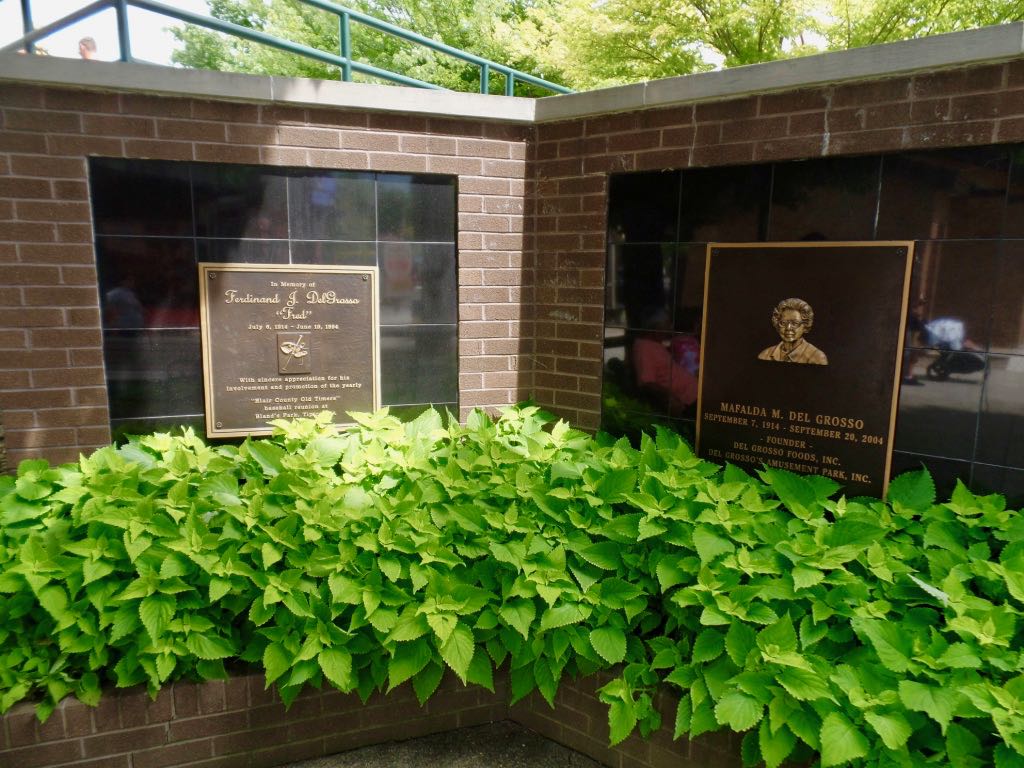 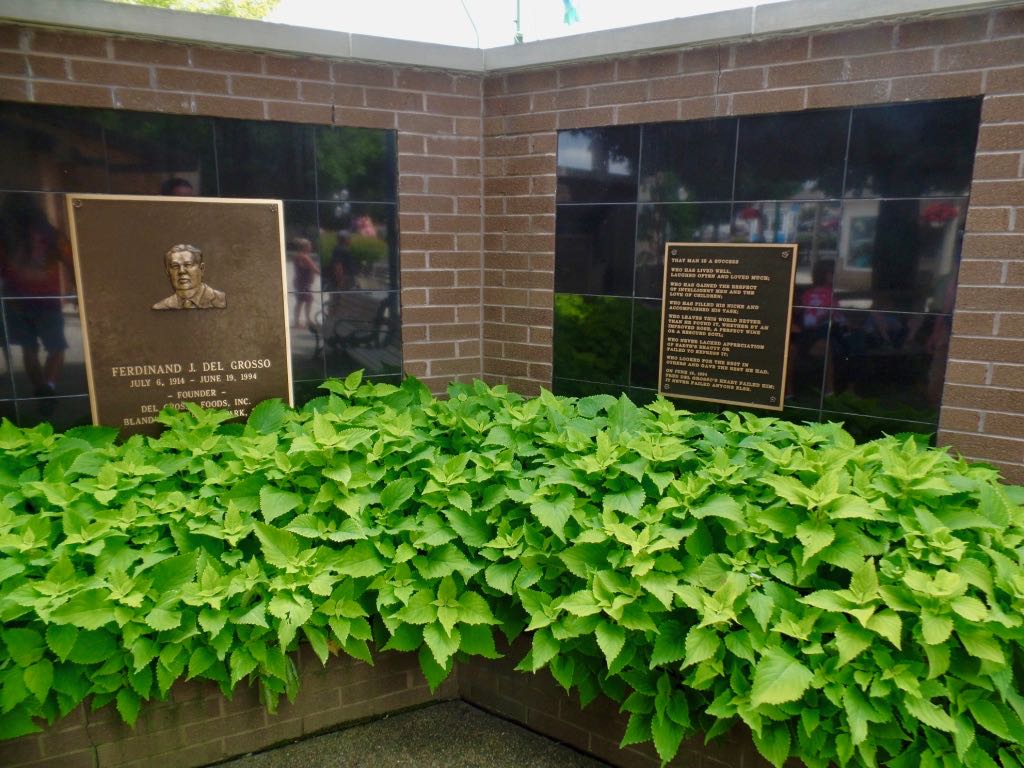 More of the memorial park, commemorating Ferdinand J DelGrosso (again) and a plaque about what makes a life well-lived; it ends with how in 1994 ``Fred Del Grosso's heart failed him; it never failed anyone else''. 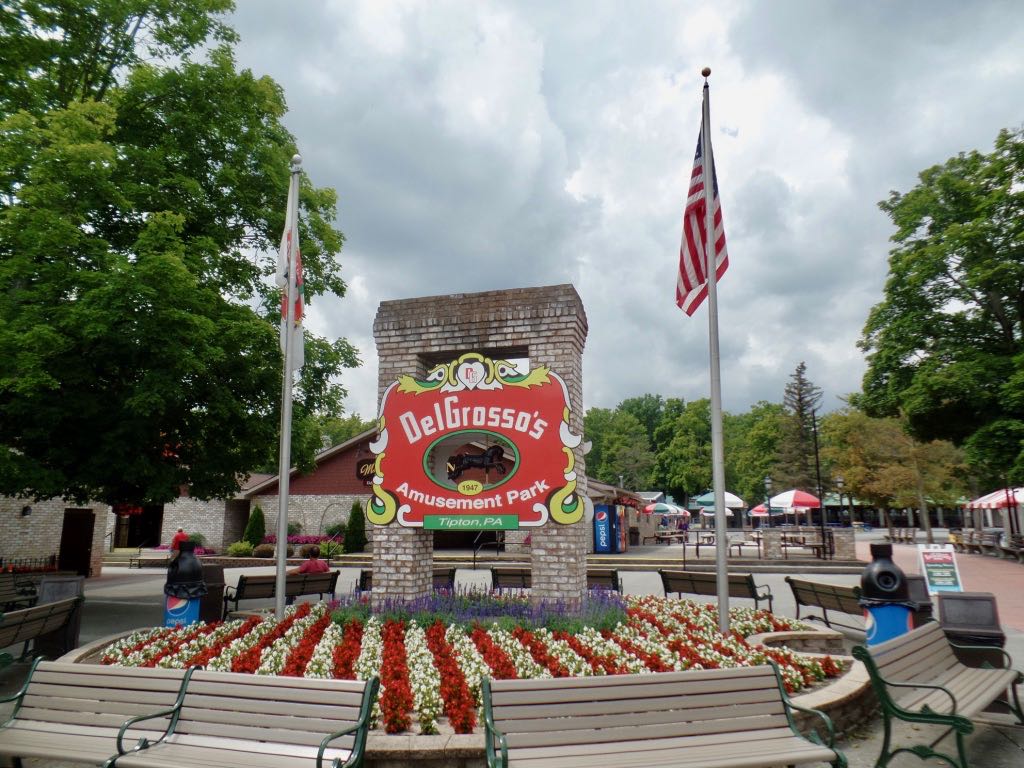 Floral garden and sign giving for the center front of the rides park. 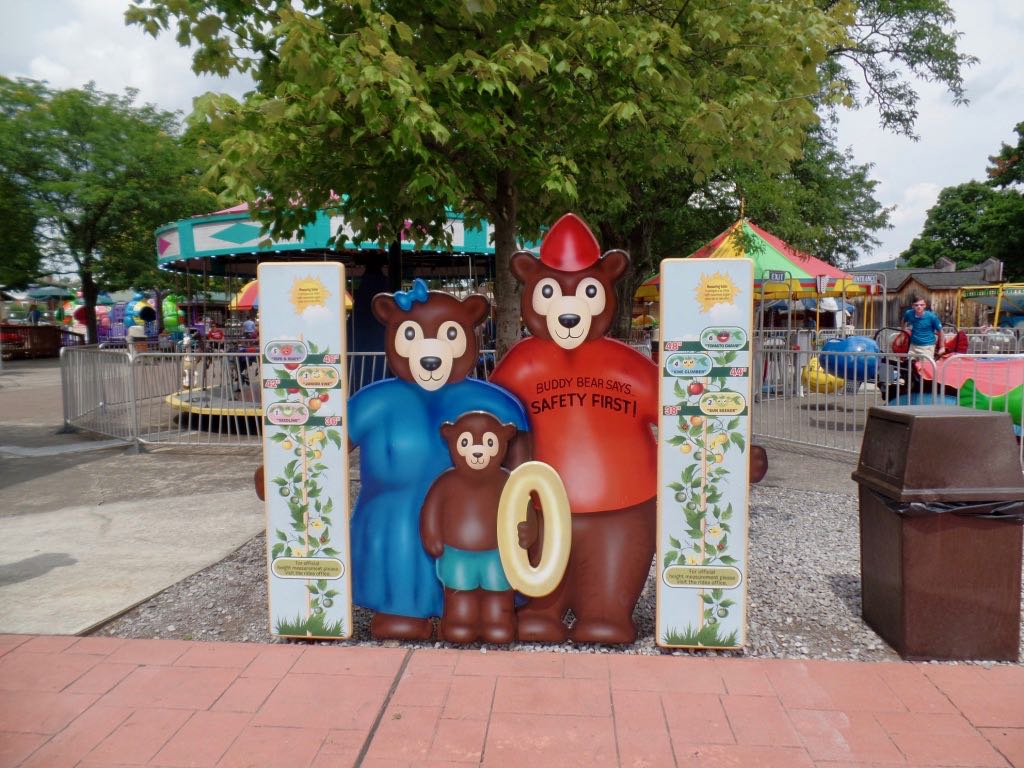 Trivia: Australian vaudeville performers during the Great War referenced the SS Dimboola, a ship deemed unfit for transport duty, but which was used to bring performers between Adelaide and Perth, across the Great Australian Bight and its rough seas. Comedians referenced it enough that audiences recognized the name and laughed at it. Source: Fred Allen: His Life and Wit, Robert Taylor.

PS: Using my A to Z Archives: Quotient Groups, or how to make even-and-odd numbers hard again.