The city clerk's received my ballot. Glad to have that in, and also glad that the Democrats can save the expense mailing things to me for a couple weeks. Put the advertising budget to somewhere it can do good. Now I just have to hope the Republican partisans on the state Supreme Court decide to allow the counting of ballots this year.

Took my iPod Touch to the off-label Mac repair store in their new Downtown East Lansing location, my first time setting foot in Downtown East Lansing since the students came back and set off the plague wave. (The place looks like a Rustic-Lodge-Themed Apple Store, and it has a popcorn maker, not in use.) Couple hours later they called the with the evaluation: they believe it's a bad battery. I'll be getting it repaired, for about $90, or about half what a replacement iPod Touch would cost. ... I should probably also take the chance to buy a new OtterBox as the old one's been pretty battered by the years.

Saturday we drove to

bunny_hugger's parents. This weekend was looking to be sunny and warm and who knows how many weekends like that we're going to see until 2021? It happens Saturday was the most overcast day of the weekend, but it was still really good weather. Maybe our best overall day of weather for sitting out in the yard while the dogs run off their anxieties since the pandemic came upon us.

It was a day for chillin-and-grillin, they'd put it. The grilling here being a bunch of BeyondMeat sausages and bratwurst. We'd tried to get regular Italian sausage, but the stores only had Hot Italian. We think they only make Hot Italian. This is trouble only for

bunny_hugger's father, who does not care for anything spicier than having a shaker of black pepper on the table. So bratwurst was the backup and was pretty well-received. I ended up having two Italian sausages myself. Also we had a lot of potato salad that her mother made and that she'll never believe is as good as we say.

The dogs were, really, doing better than average. Pookie particularly was not all that freaked out by me hanging around, though she much preferred the times that

bunny_hugger's father was nearby. Peewee has hyperactive as usual and ran enough that I could see the phenomenon

bunny_hugger's parents described. She'll sometimes run on three legs. No idea what would drive her to this.

We stayed through to sunset, and left them with a couple of things. This includes snapdragons not going back into our window box and a bunch of dog toys that

bunny_hugger earned as thanks for a virtual 5K run she did recently. Returned some Tupperware of theirs and took some of their Tupperware home with leftover potato salad. That kind of thing.

bunny_hugger's mother mentioned how Thanksgiving was obviously off. I guess we'd known that was likely, since the United States chose to pretend that if we didn't do anything the virus would go away. It's hard, though. Given how scrupulous both we and

bunny_hugger's parents have been about quarantining it really seems like it'd be safe for us, for this time. But it would certainly be safe to have dinner over FaceTime instead.

And then there's Christmas. Because

bunny_hugger's school goes to Christmas break early this year it's viable for us to completely quarantine, not going out for anything, for fourteen days. It might be worth it to have something be normal for this year.

Now back to our short visit to DelGrosso's, the last day of July 2019. 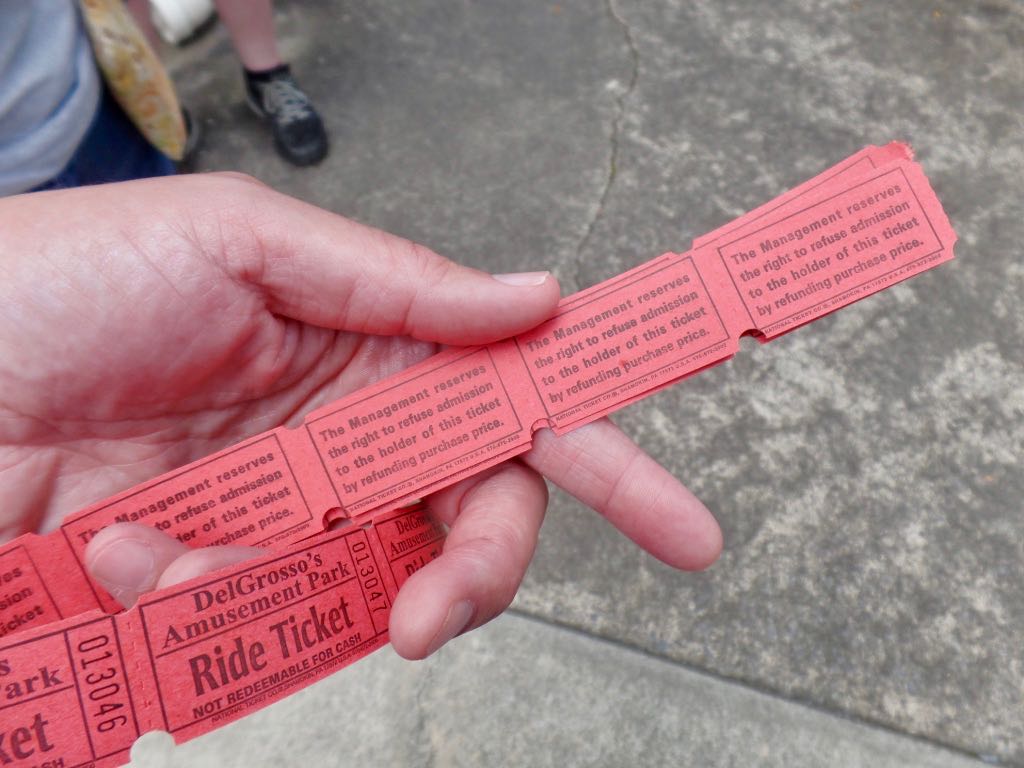 We couldn't possibly be there long enough to justify getting a ride-all-day wristband. So we got ride tickets instead, and here's what they look like. 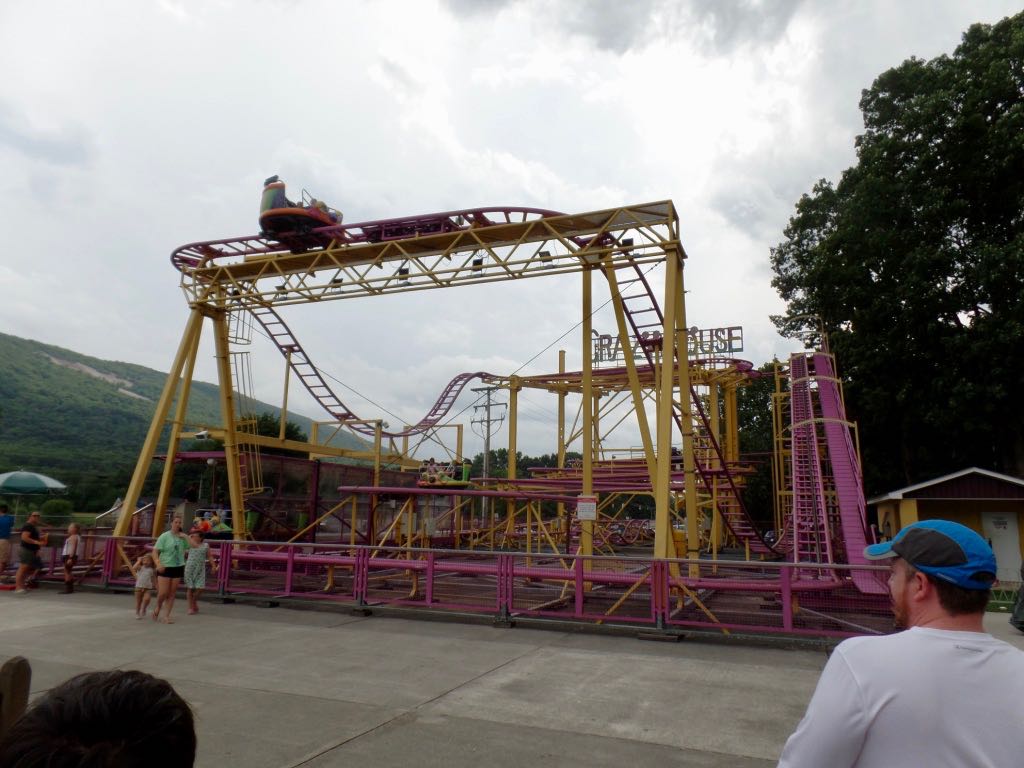 DelGrosso's bigger roller coaster is this Crazy Mouse, the same model as Kennywood's (indoors) Exterminator, La Feria's Raton Loco, and many other parks. 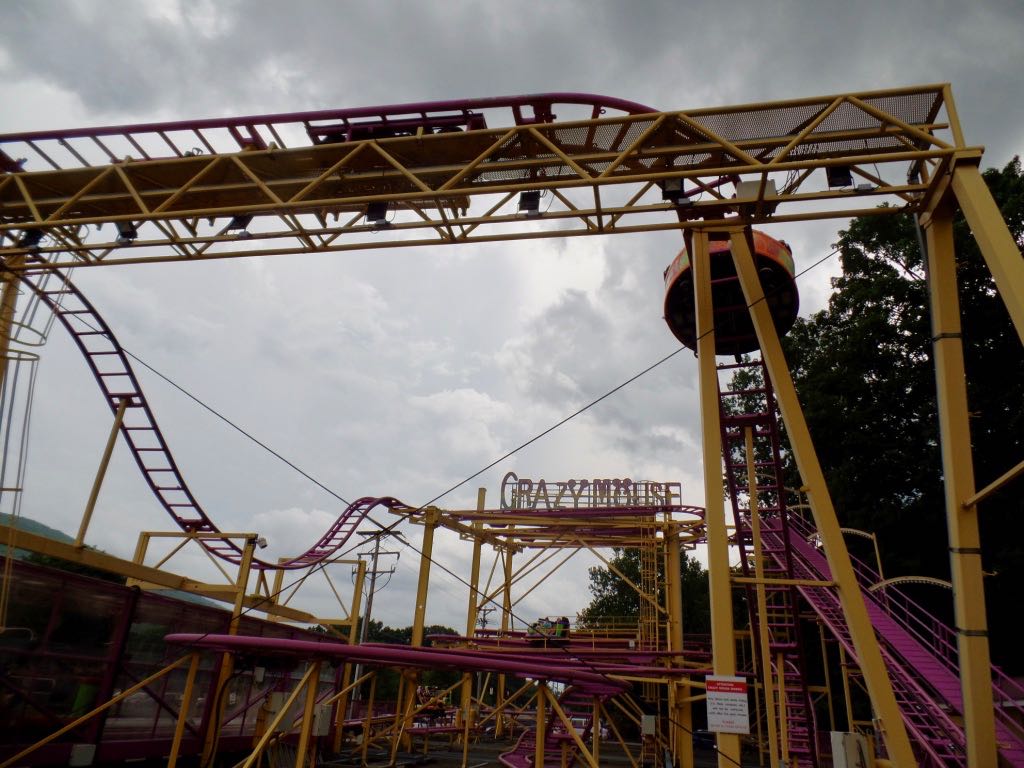 So, uh ... yeah, the ride came to a halt when something or other got stuck. This is a picture of right after it came back, following a pretty long downtime, but it had to stop shortly after again. 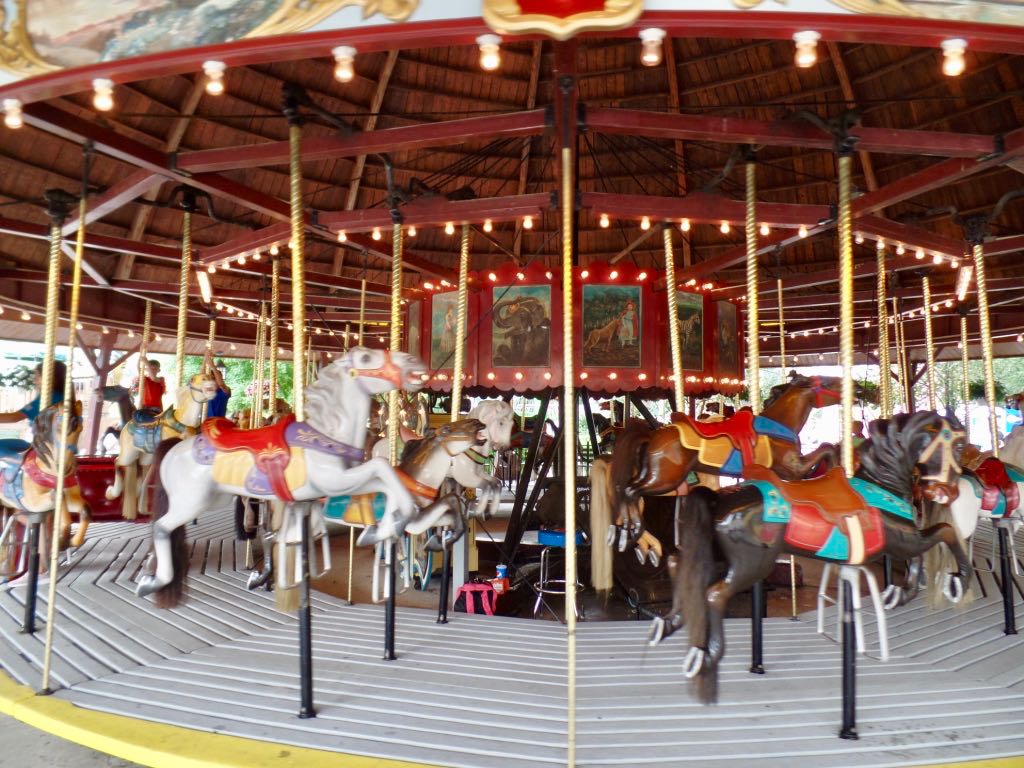 So we went to the carousel! DelGrosso's has an antique carousel, bought in 1924(?), and I believe it's the oldest carousel we've ridden that's still in its original location. 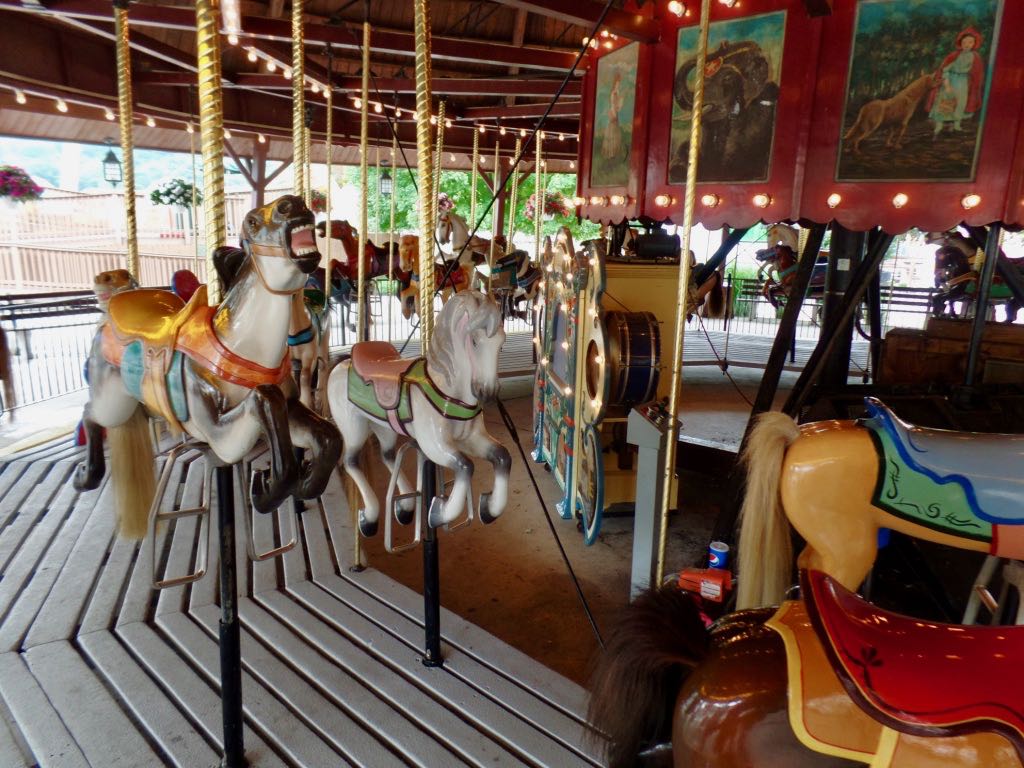 View of the carousel with a glimpse at its band organ. Notice the Little Red Riding Hood scenery panel in the upper right corner. 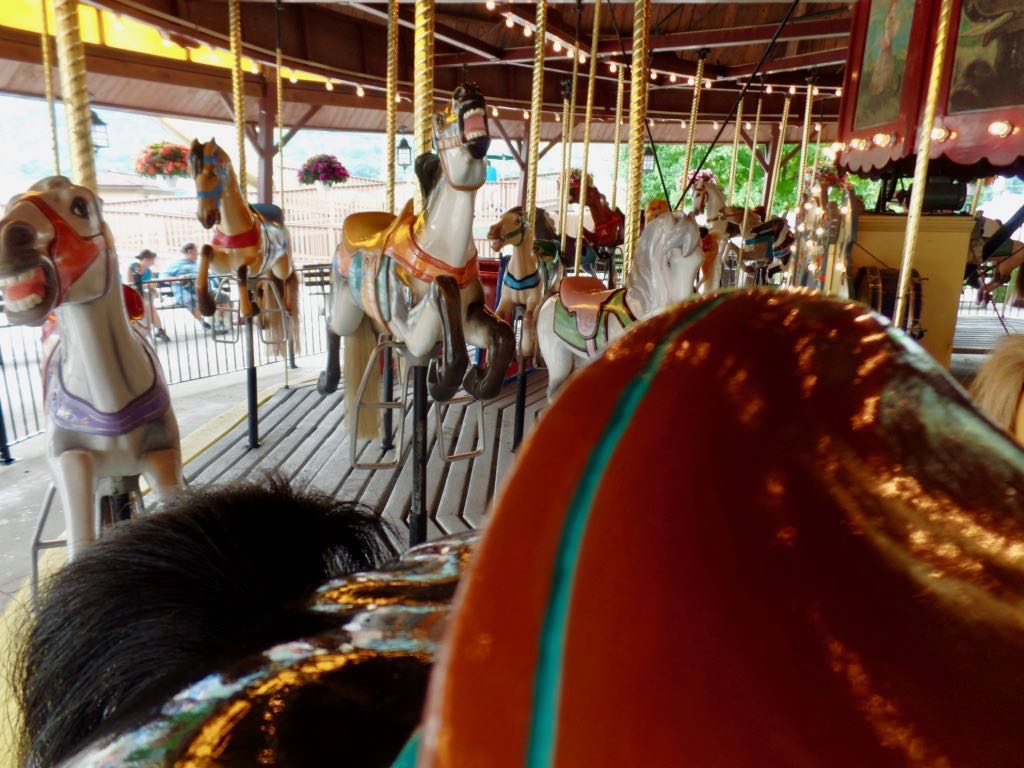 Extreme close-up look at the saddle of one horse and the animals behind. 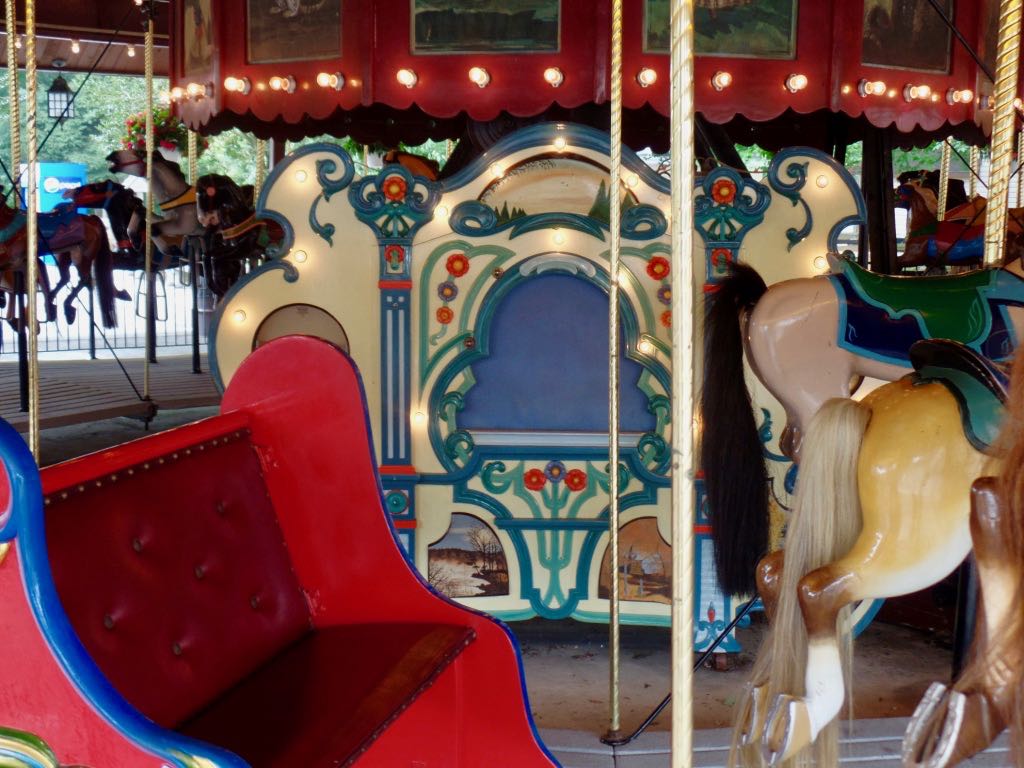 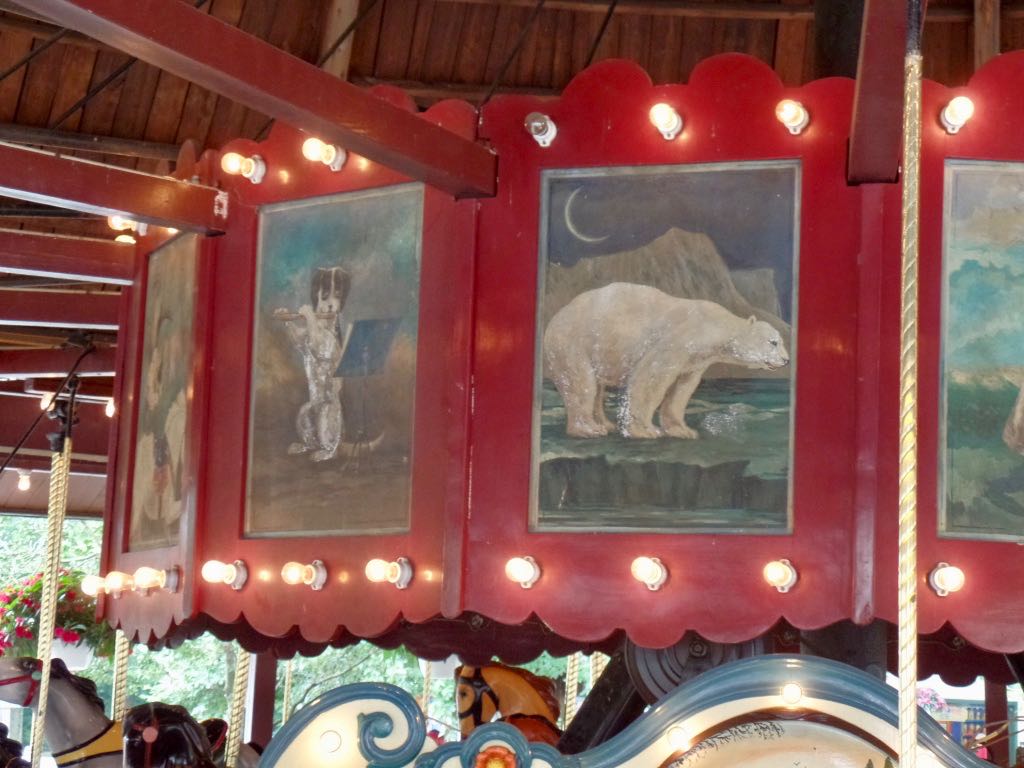 And here's scenery panels. The dog playing a flute sure seems like it's referencing some fairy tale; possibly the Bremen Town Musicians? No idea about the polar bear. 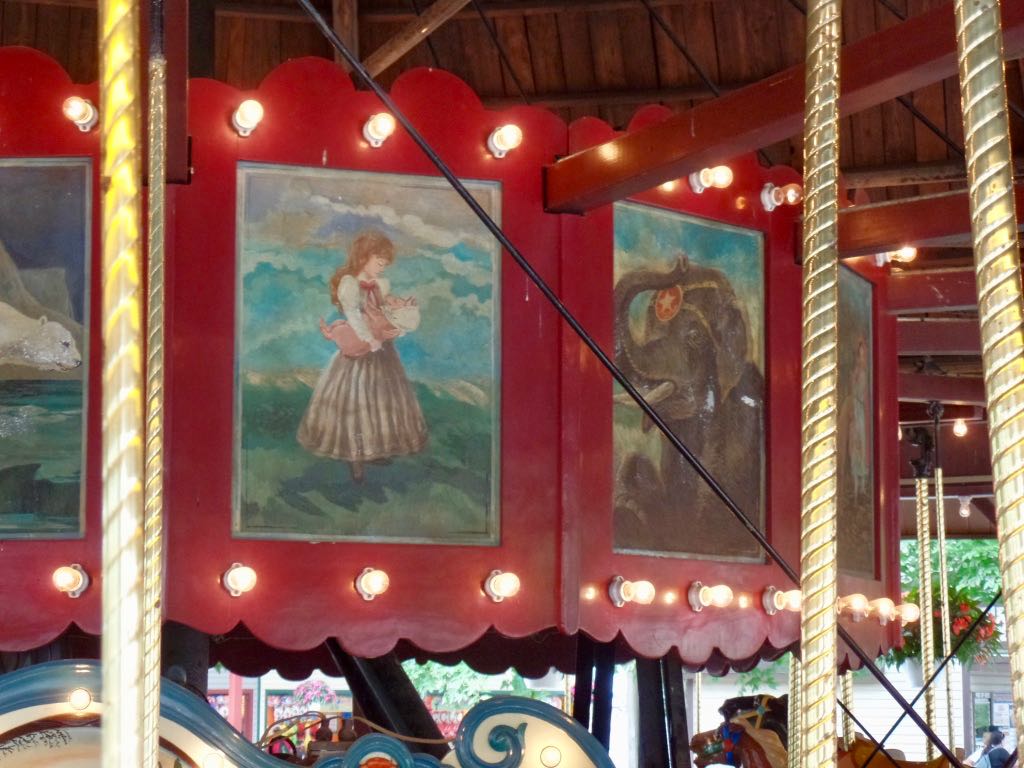 Scenery panel with ... I don't know, possibly Mary and a Little Lamb? The elephant could be anything, I suppose. 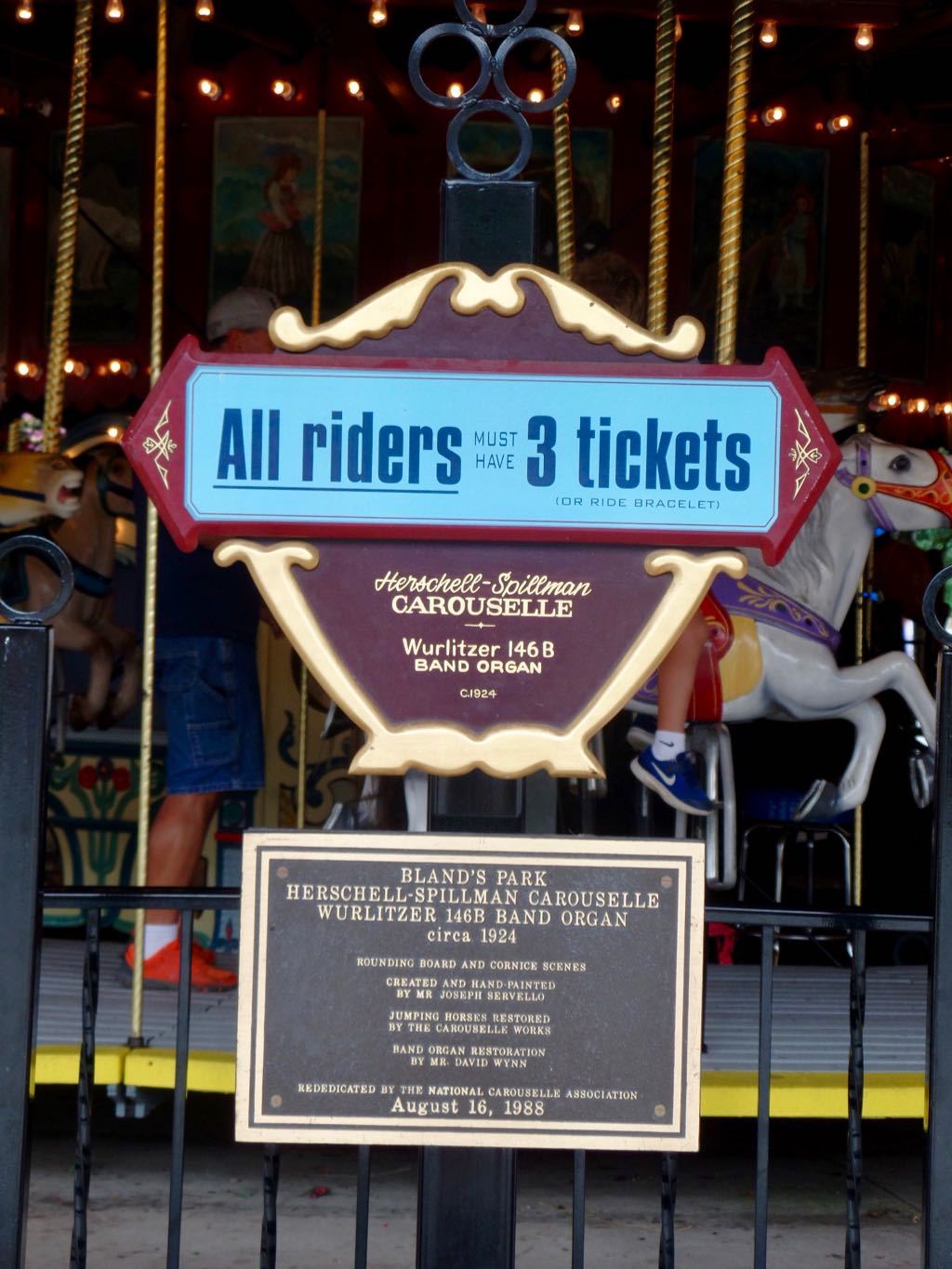 Sign with some historical information about the Carouselle, another spelling encountered this trip. So the Bland's Park thing: the location was named for the Blands, the family farm on which the Rinard Brothers opened the park around 1907. Fred DelGrosso bought the park in 1946, but kept the Bland's name until 2000 because of the reasons. 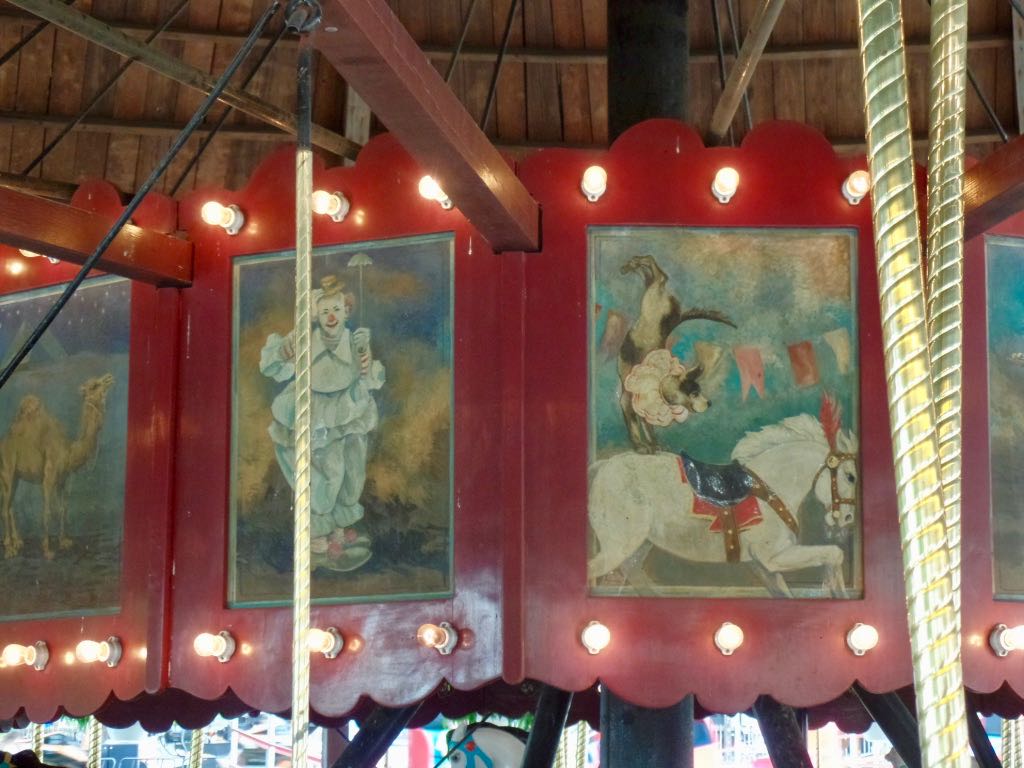 Some more scenery panels, including a clown and a dog-and-pony show. 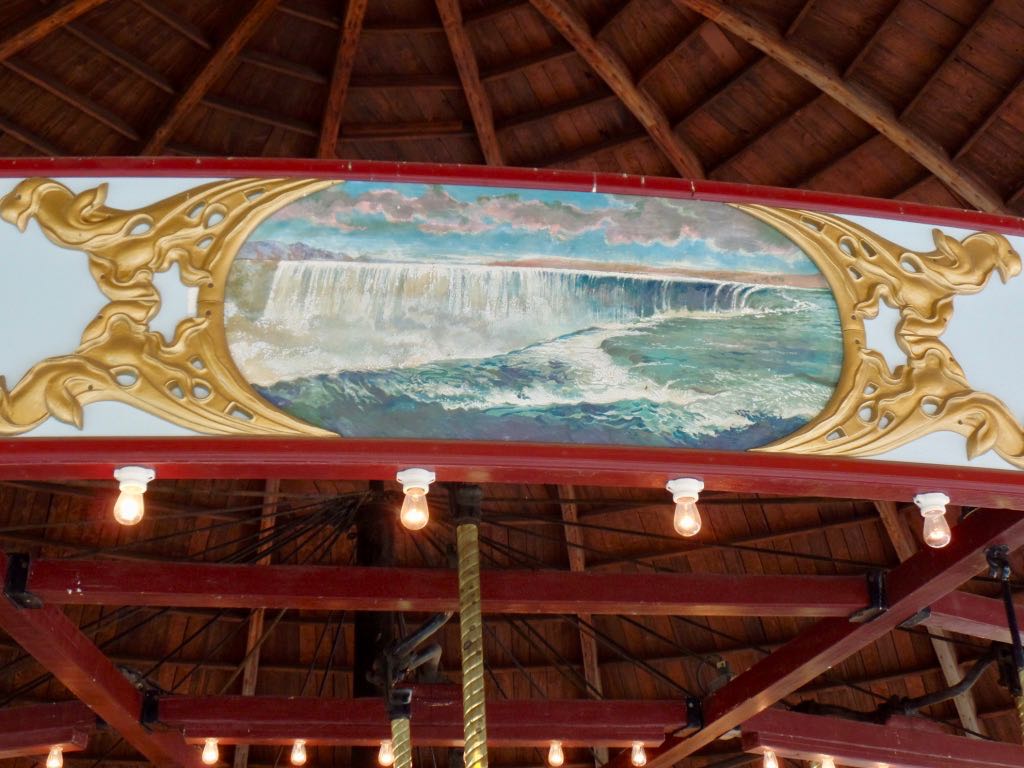 Yet one of the scenery panels has Niagara Falls, which reminds you this is a Herschell-Spillman carouselle.

Trivia: For the 1963 astronaut candidate selection NASA received 71 applications from the Air Force, Navy, and Marine Corps, and 200 applications from civilians. Source: The Astronaut Maker: How One Mysterious Engineer Ran Human Spaceflight For A Generation, Michael Cassutt.

PS: I'm looking for V, W, and X topics for the All 2020 A-to-Z in case you'd like to see me talking mathematics some more.