Where the supermarket used to stand

Before my walk yesterday I joked, ``I'll be out five minutes and they'll call to say my iPod's fixed''. It was not that close; I was back an hour or so when they called. But the important thing is, they fixed my iPod! At least, they replaced the battery and tested to confirm that now it would run on the battery for hours without crashing. That's a good sign. Didn't even lose any data; I could resume my podcast from right where I dropped it off on Tuesday.

The Minding Animals conference, scheduled for July 2021 in Australia, is indefinitely postponed. Covid-19, of course. We were expecting the announcement since international academic conferences need a lot of lead time, and it's hard to imagine Americans being able to even travel overseas as soon as July. We had planned to attend;

bunny_hugger had been to three of the four so far, and we'd used attending it to support our honeymoon in the Netherlands and Britain in 2012, and going to Mexico City in 2018.

Still, uh, I guess the good thing is we don't have to worry about a schedule conflict with Pinburgh 2021, also expected for sometime in July. We can go to that without worrying.

Back to Lakemont Park, and crawling all over Leap The Dips and oh, what a exciting ride it would have been. Had it been running it would have been MWS's 100th roller coaster, in his personal log. He expected 100 to be the only roller coaster milestone he'd be likely to make and with Leap The Dips out of service he'd have to save it for Kennywood's new coaster, Steel Curtain. 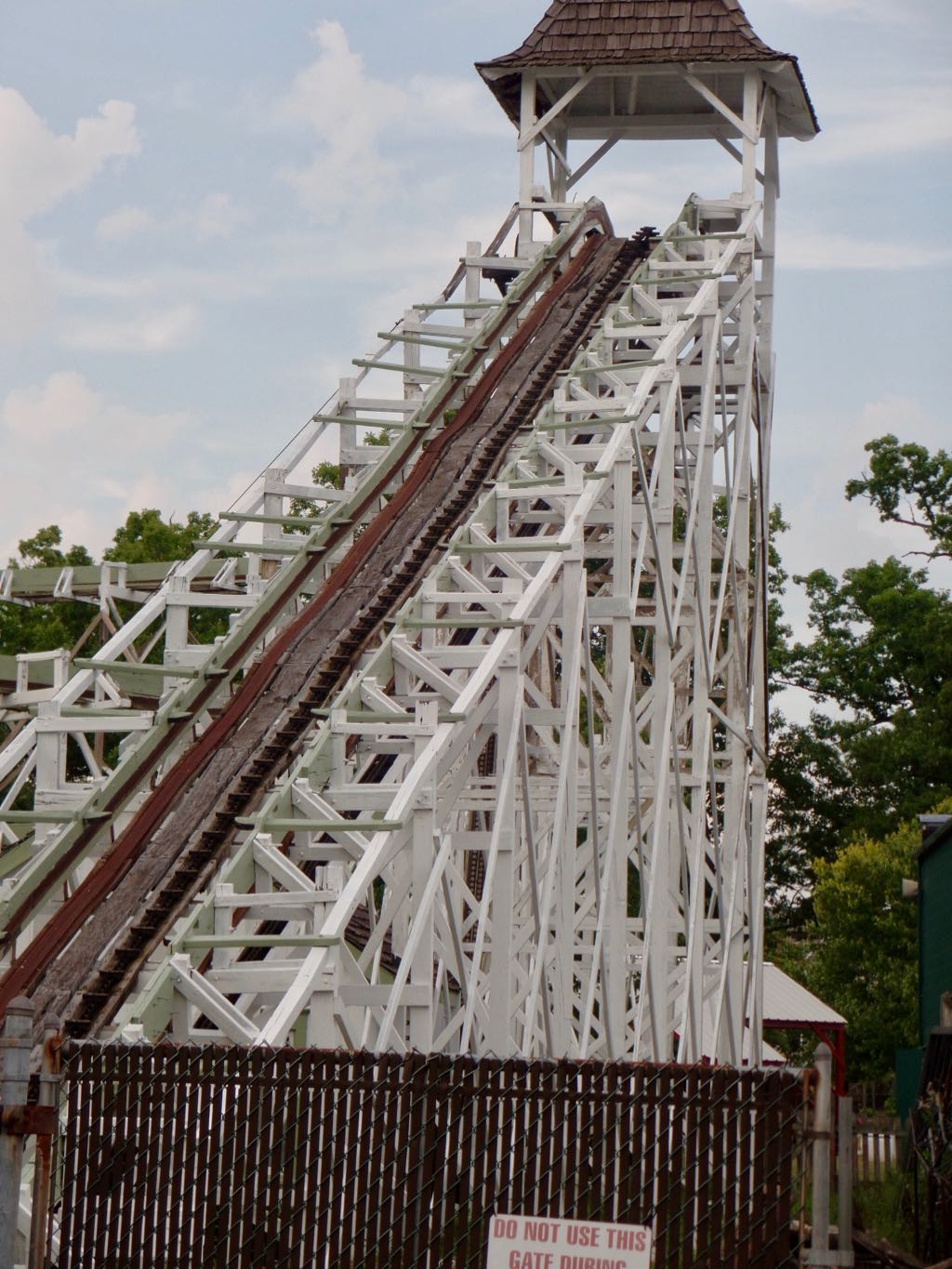 Nice view of the lift hill for Leap The Dips. Note the grey-green horizontal slats; that's the mechanism to keep the car from sliding back downhill if the lift chain slips. 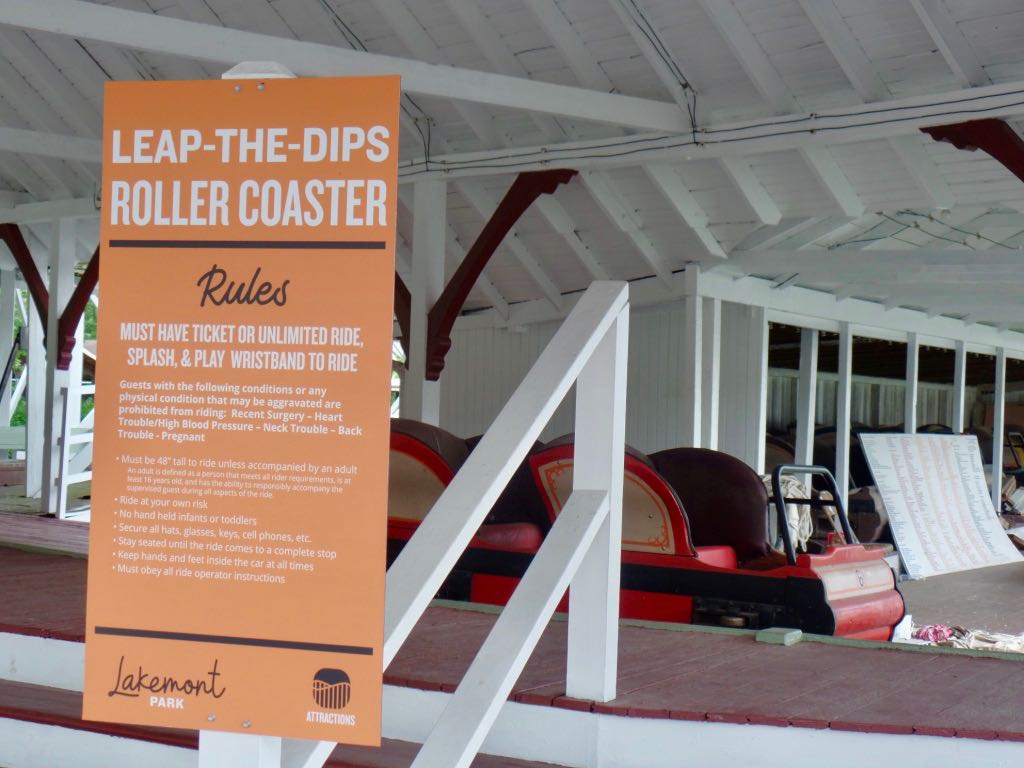 The ride sign and rules for Leap The Dips, along with one of the cars --- practically a sleigh --- at the loading station. 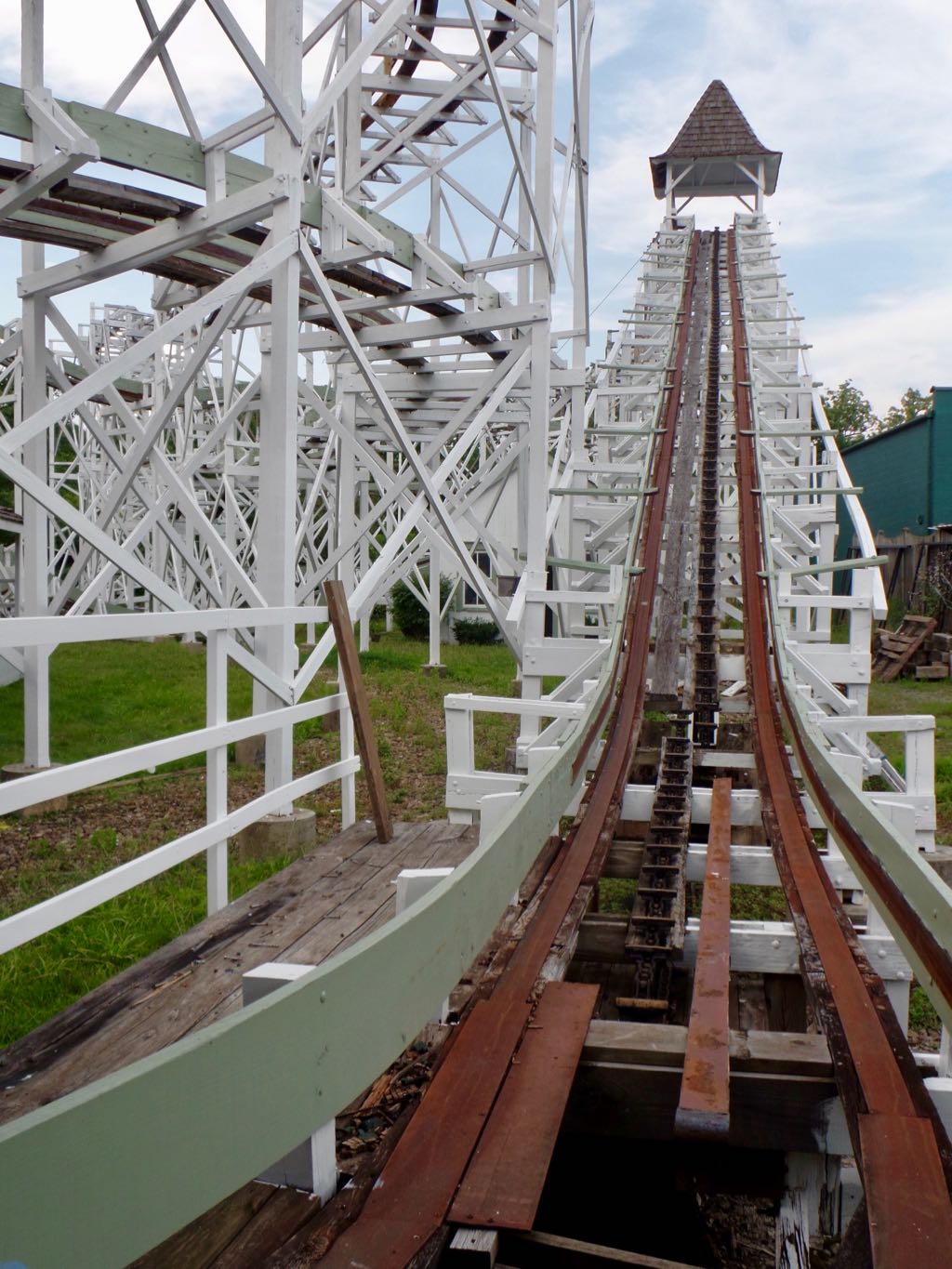 Looking up Leap The Dips's lift hill, and two of the figure-eight turns that it makes as part of the dip-leaping ride. 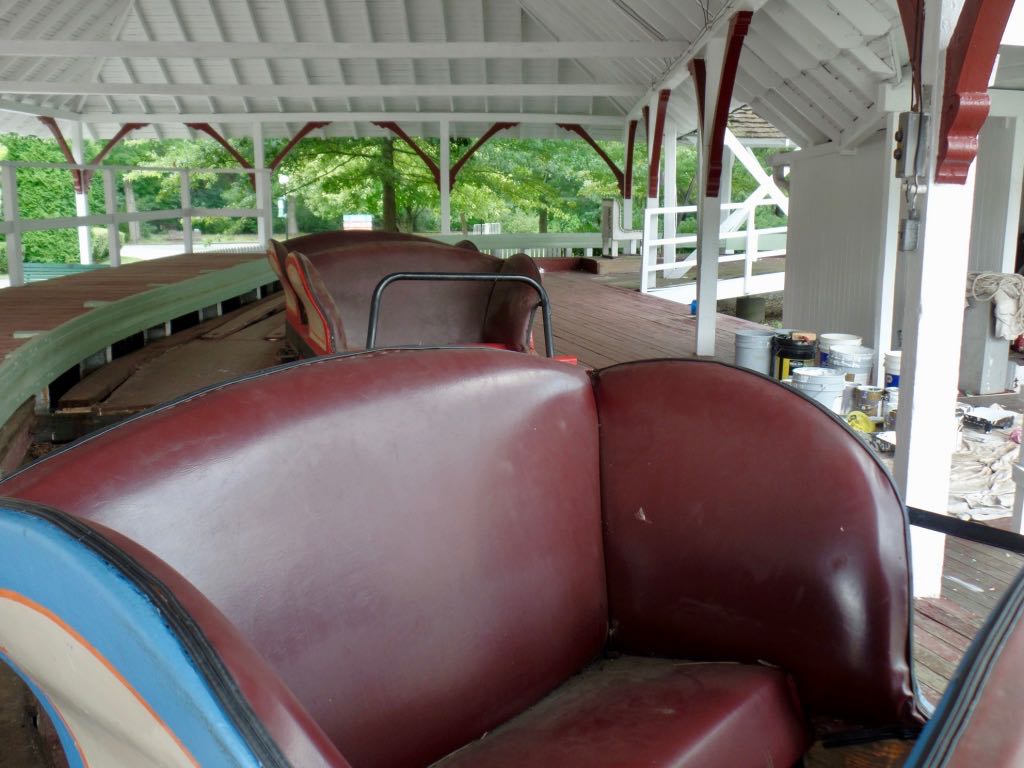 They had two cars out here, where they might be set to ride. It's hard to imagine they'd ever run two cars at once --- no brakes, never mind that it's not a busy park --- but they clearly are ready for the possibility. 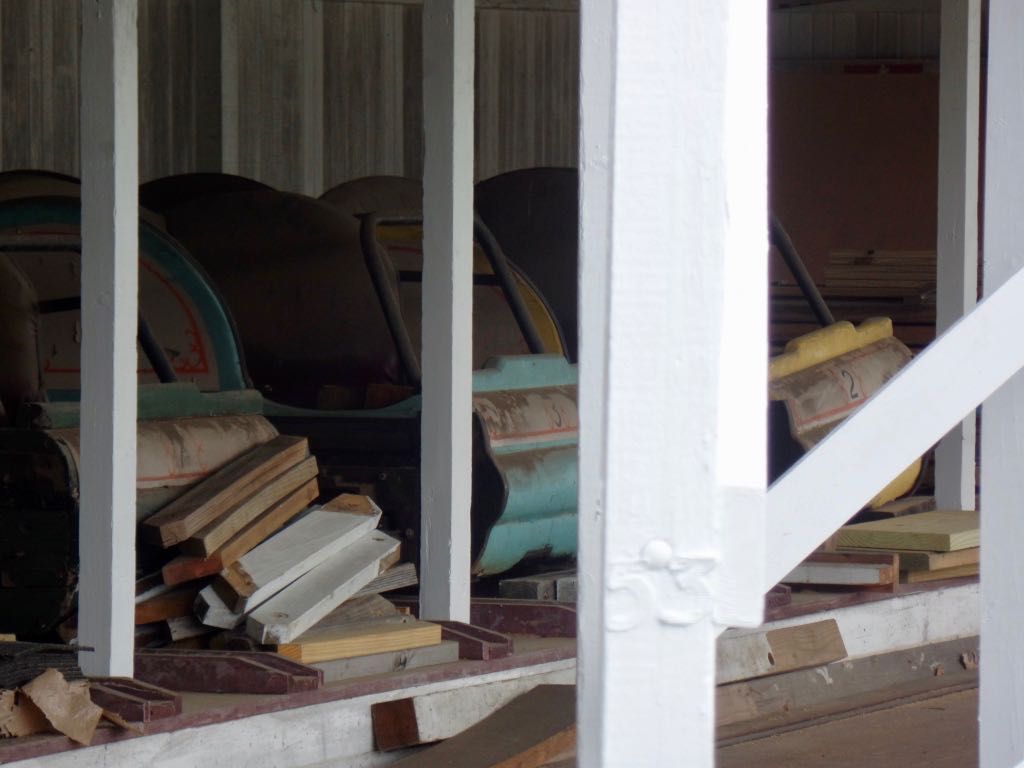 And in the deeper recesses, other cars. I assume they're used for parts or anything now, and maybe also kept for fear of losing historically interesting parts of the ride. 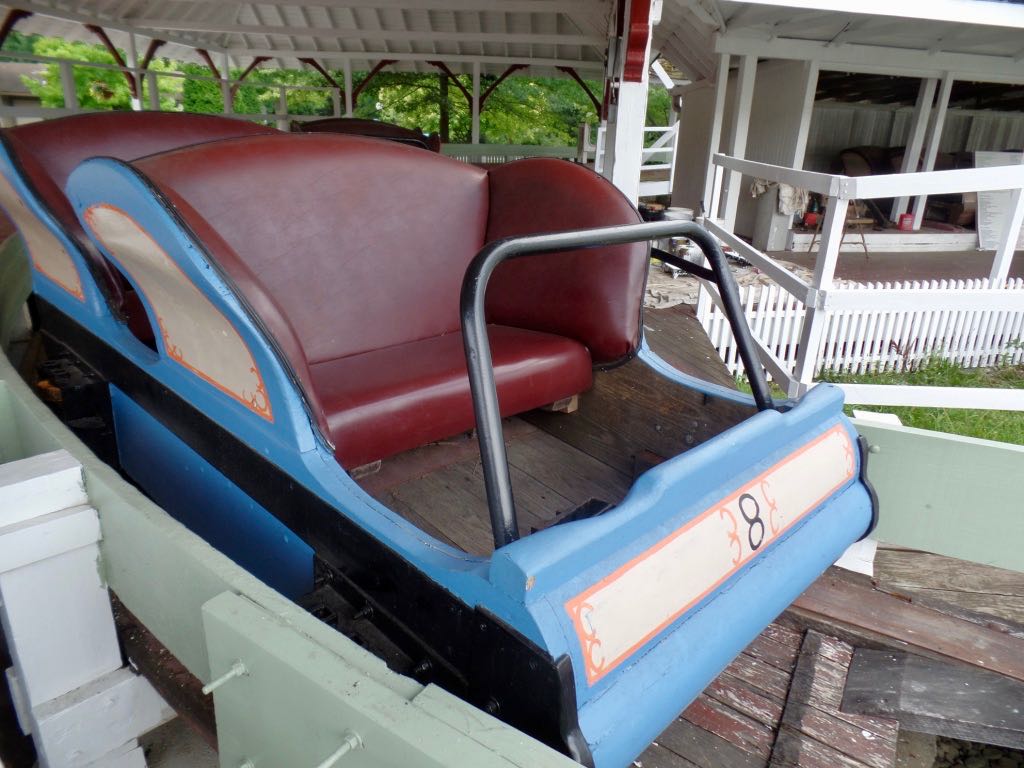 Car number eight, which I think is the one we rode in 2013. And imagine a time when they might have run eight cars on this not-at-all-large roller coaster, which hasn't got any brakes except at the end of the track, at a time. 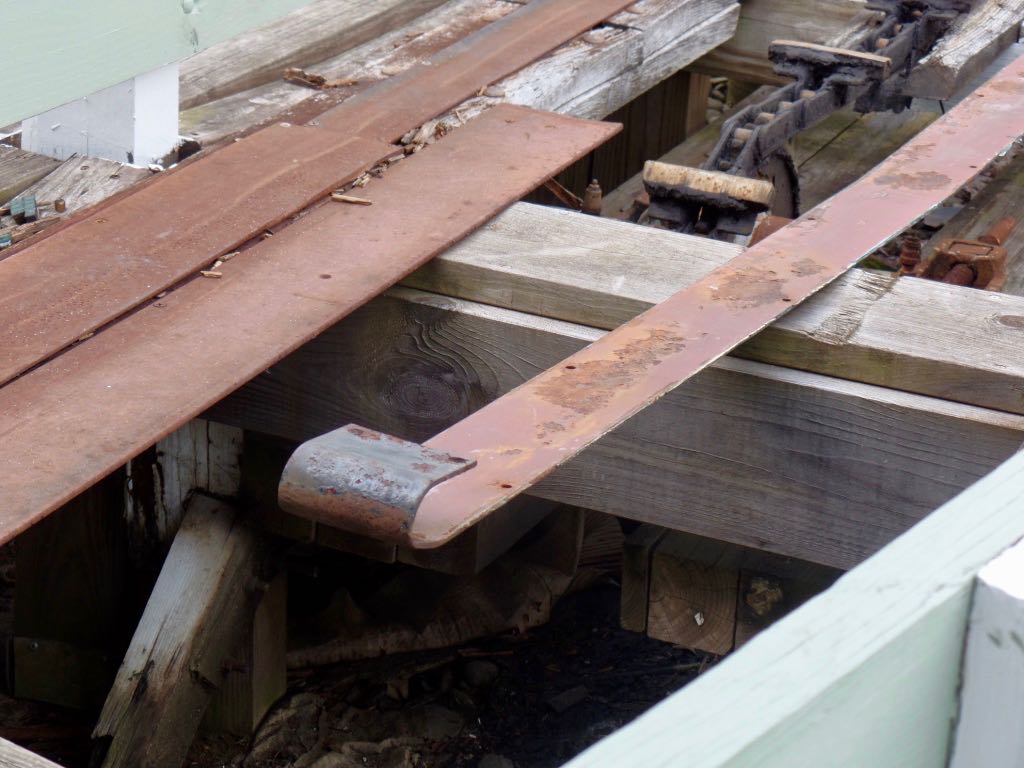 Little metallic hook at the start of the lift hill. I believe this is meant to make sure a car can't roll back from the end of the hill and crash into a car waiting at the station. 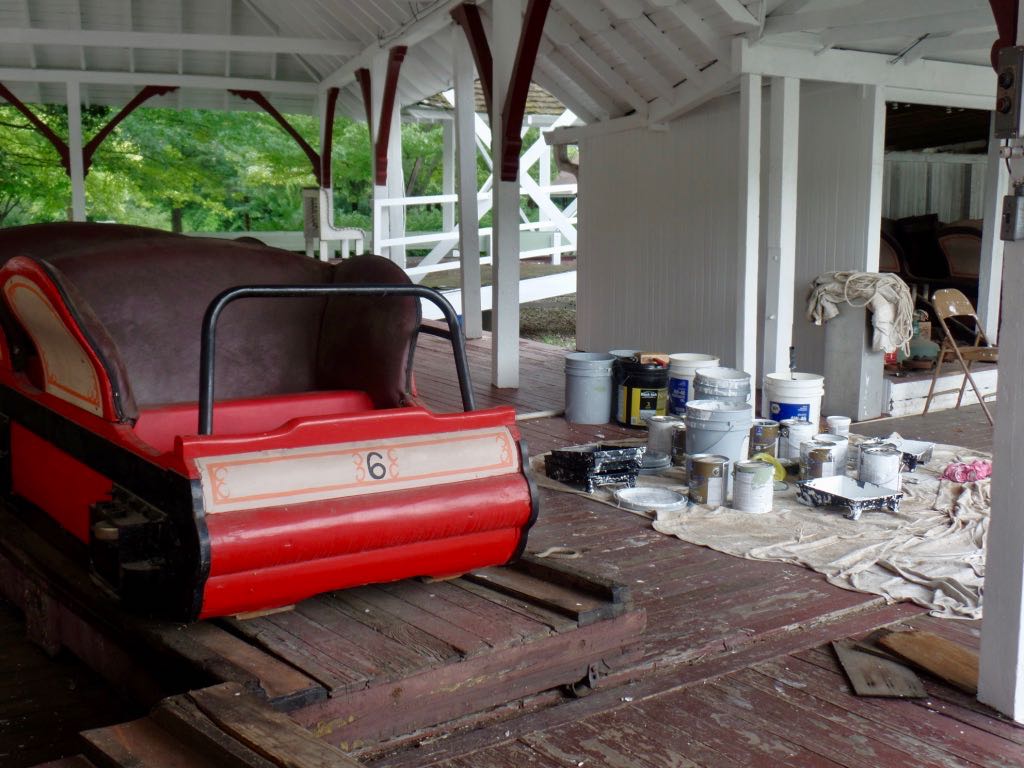 Car number six and, as you can see, a lot of wood-maintenance equipment. Unfortunately, Leap The Dips was not running when we visited, or at all during 2019. They were making repairs and doing maintenance and all, though, and the ride opened in July 2020 making it the only roller coaster it actually seems kind-of plausible to responsibly visit this year. 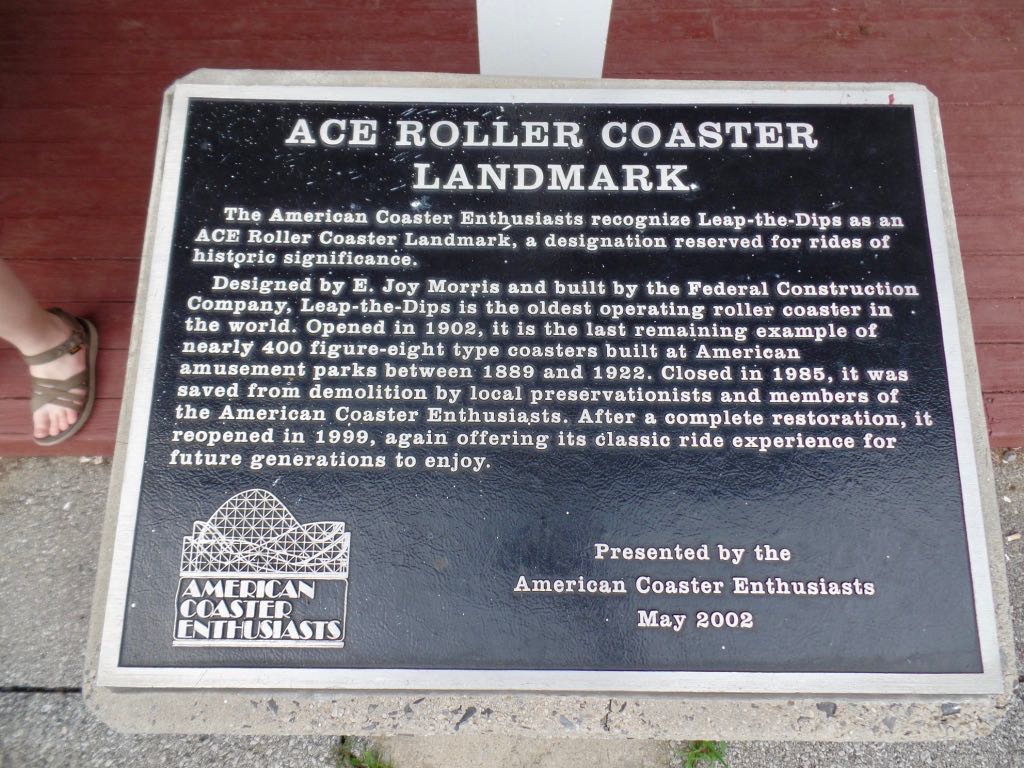 Landmark plaque put up by the American Coaster Enthusiasts when Leap The Dips turned 100. 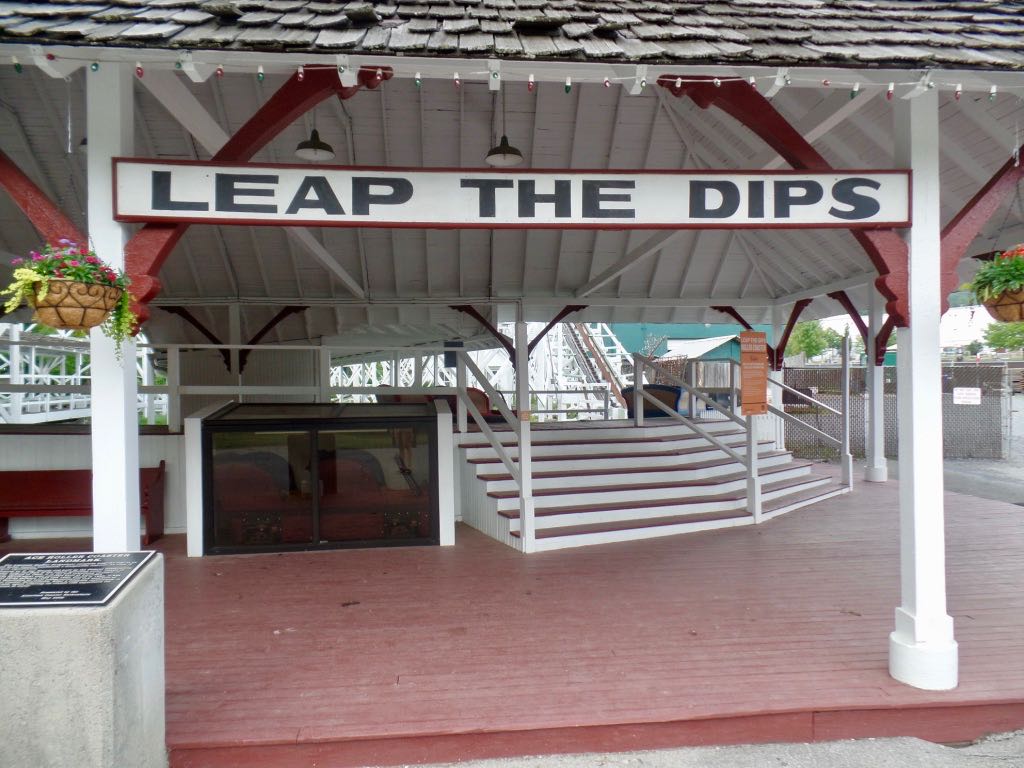 And the sign, and general entrance, for Leap The Dips. It's a very open thing, no long queue lines or anything evident. There's also a car concealed within dark glass and unexplained. I assume it's maybe the oldest car or one that had some notable event happen but, as I say, it's not explained. 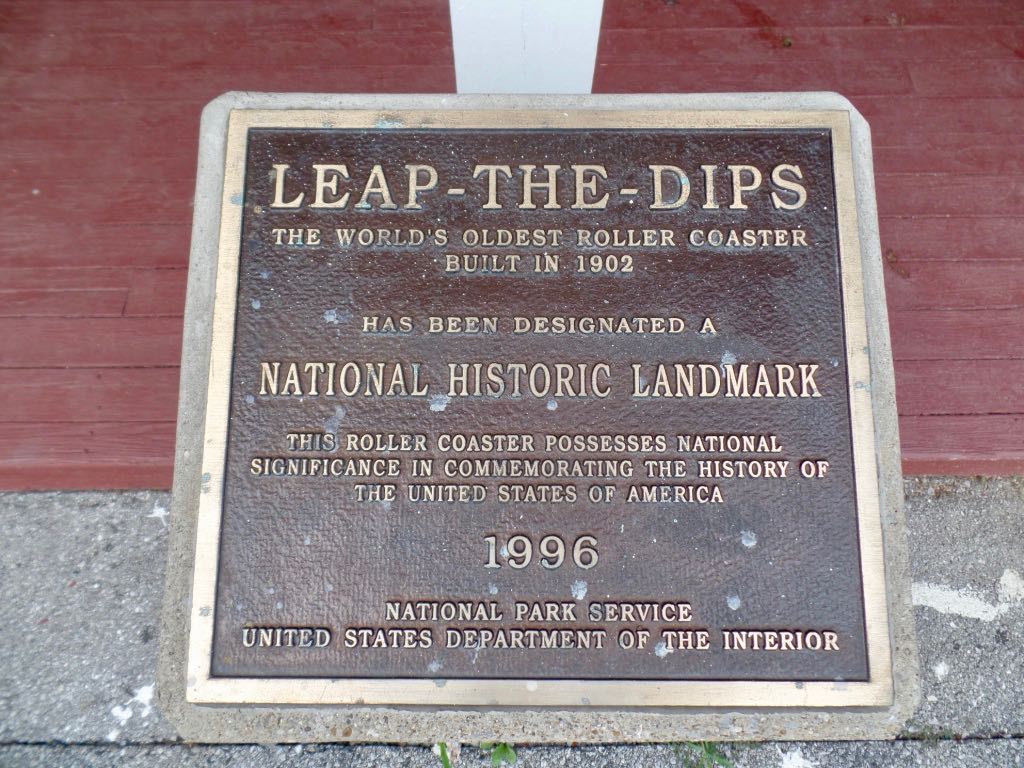 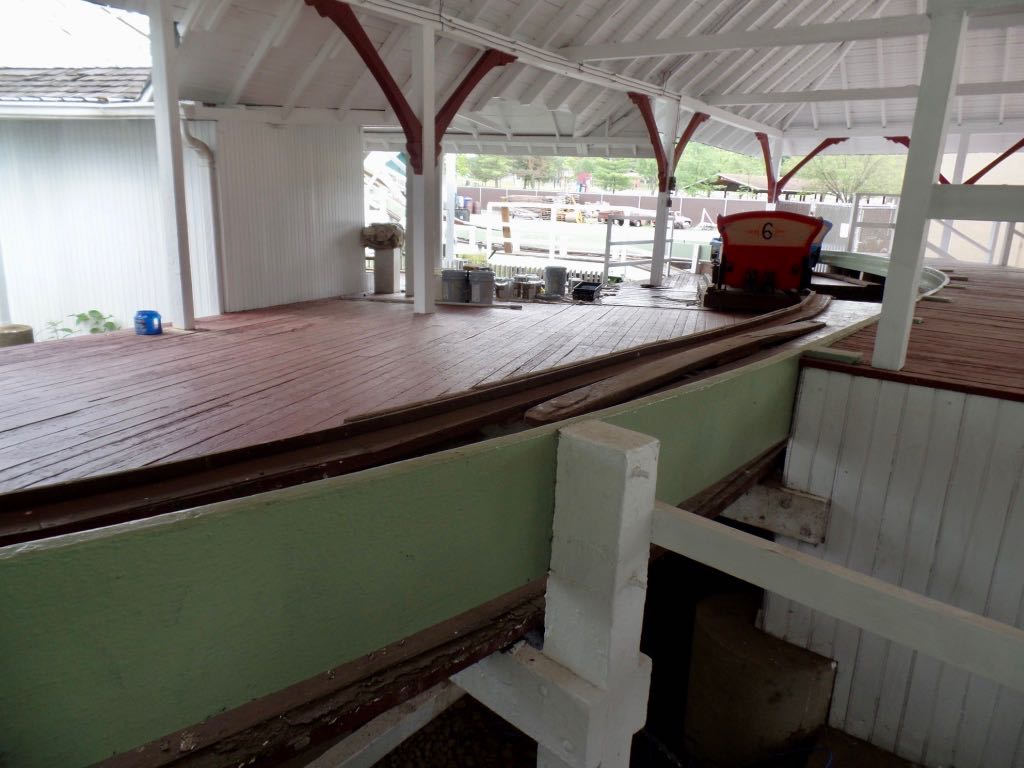 And a look from behind the loading station, at what I think of as the exit even though you can really just come and go from anywhere along the ride's length.

Trivia: In January 1791 President George Washington wrote Virginia Governor Beverly Randolph of his backing away from schemes to entice British artisans to break emigration laws and come to America: ``I am told that it is a felony to export the machines, which it is probably the artist contemplates to bring with him, and it certainly would not carry an aspect very favorable to the dignity of the United States for the President in a clandestine manner to entice the subjects of another nation to violate its laws''. Source: Smuggler Nation: How Illicit Trade Made America, Peter Andreas. Still, Washington did not mean to discourage other people from encouraging British subjects to bring badly-needed industrial skills and machine tools to the United States.

Currently Reading: Popeye And The ``Jeep'', Elzie Segar. Early-80s reprint of the tail end of the story where Popeye is the ruler of Spinachovina, and most of the first two stories with the Jeep. The stories read a little better than they did in daily form, even for just a couple redundant strips (or half-strips) being dropped.