On the site that used to be the local palais

Saturday we went to a drive-in. The Capri, down in Coldwater, which was showing a double feature: The Nightmare Before Christmas and Hocus Pocus. The first we've seen a bunch of times, the second we'd never seen. A pop-up drive-in in town was also showing Nightmare, but just as a single feature, so we decided to go for the full experience instead. Plus, who knows how much longer the Capri will be open this season? It would be a bit chilly, but going this late in the year has advantages. For one, the bill could start about 7:45, two-plus hours earlier than a midsummer show. That and the shortness of the movies meant we were home by midnight, a novel event.

Nightmare, now ... I guess I haven't seen in the past decade. The second-biggest change in my impression of the movie is that, oh, yeah, for a musical animation it doesn't really have any songs, does it? It has a lot of music but almost all of it is kind of tuneless. (Also we learned that Jack Skellington has different speaking and singing voices; who knew?) Even when something has a tune (``Kidnap the Santy Claws'') do you remember any of the lyrics?

The biggest change is, uh, yeah, the Oogie Boogie Man is not a good look. I guess Halloween Town has to have a villain who's actually scary or else the end of the movie ... comes ten minutes earlier? Did we actually need this plot thread? But he does end up pushing just a couple too many old-racist-stereotype buttons. I'm willing to accept it was accidental, the result of, like, figuring he should evoke the Cab Calloway Betty Boop cartoons and needs a good jazzy/boogie-woogie soundscape and such. But mixing that together without mindfulness, especially with making his gimmick being crooked gambling work, just stumbles over the line in a way that I'd like to think we wouldn't do now, or wouldn't do if there were a non-white person in the writing room. I feel like, for me, this doesn't spoil the movie yet. But it does mean what should be an exciting climax is instead awkward and embarrassing and, you know, did we really need this to finish Jack Skellington's story?

So while he's the centerpiece of Halloween, Jack Skellington is not the Mayor of Halloween Town. So, who's the mayor of Christmas Town? Santa's obviously the center character there but is he the mayor? Is Father Christmas? Someone else? Also, that rabbit that Lock, Shock, and Barrel abduct by mistake: the Easter Bunny, or just a red rabbit who happened to be in Easter Town? Also, did they actually return him? (I vote they returned him, on the grounds that if they didn't, we'd see a follow-up joke about that.)

And hey, imagine a version of the story where Sally ever talks about something that isn't one of the two guys in her life. Also, like, did Sally and Jack know each other before the movie started? I had had the impression they didn't, but watching the movie again I'm not sure.

Really, though, what does the story gain by having the Oogie Boogie Man in it?

On my mathematics blog I'm Using my A to Z Archives: Riemann Sum, which is different from the Riemann Sphere mentioned last week. Promise.

So we're not done with Lakemont Park yet, for all that there's only a few things there.

Gosh, I didn't remember the loading station being this curved. Best of like four attempts at taking a panoramic shot here. 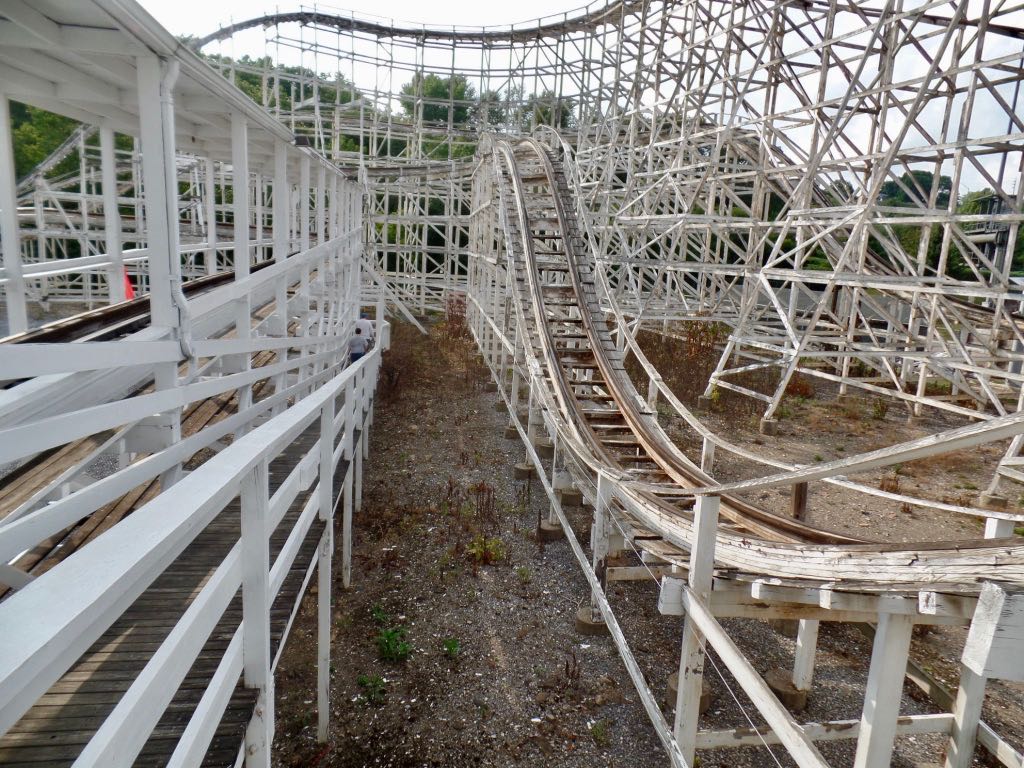 Walking down the exit ramp and getting a look at the lift hill, and the second turnaround where it goes out and back again. 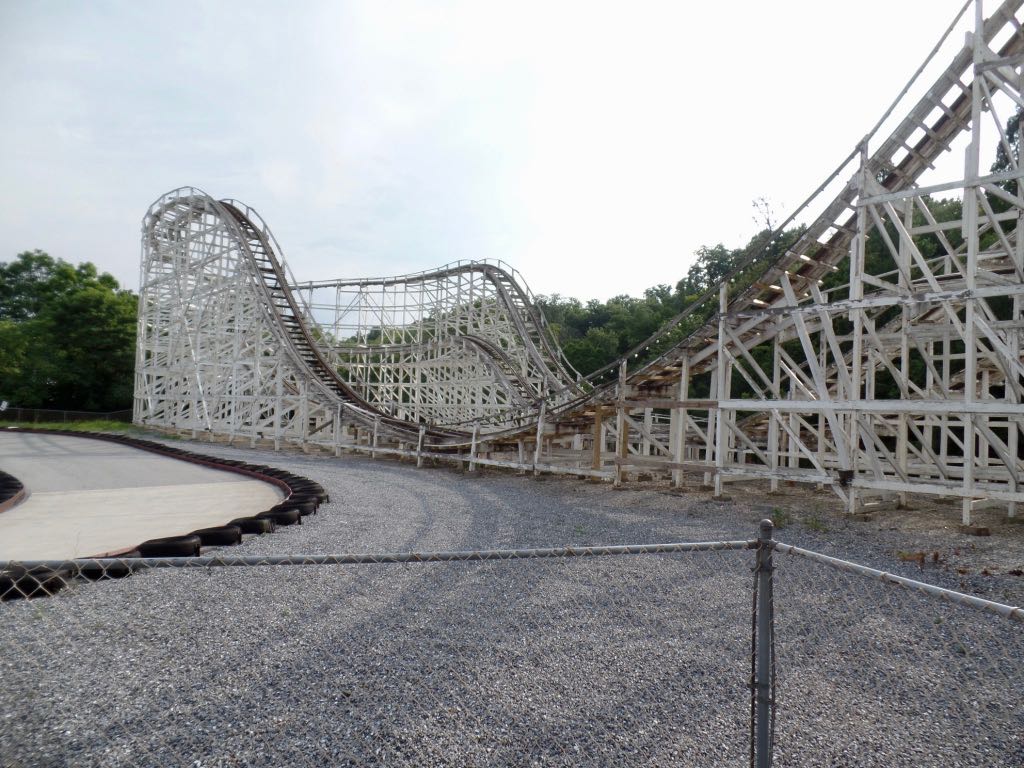 Looking back at the main turnaround and a glimpse of the go-kart track that wasn't being used. 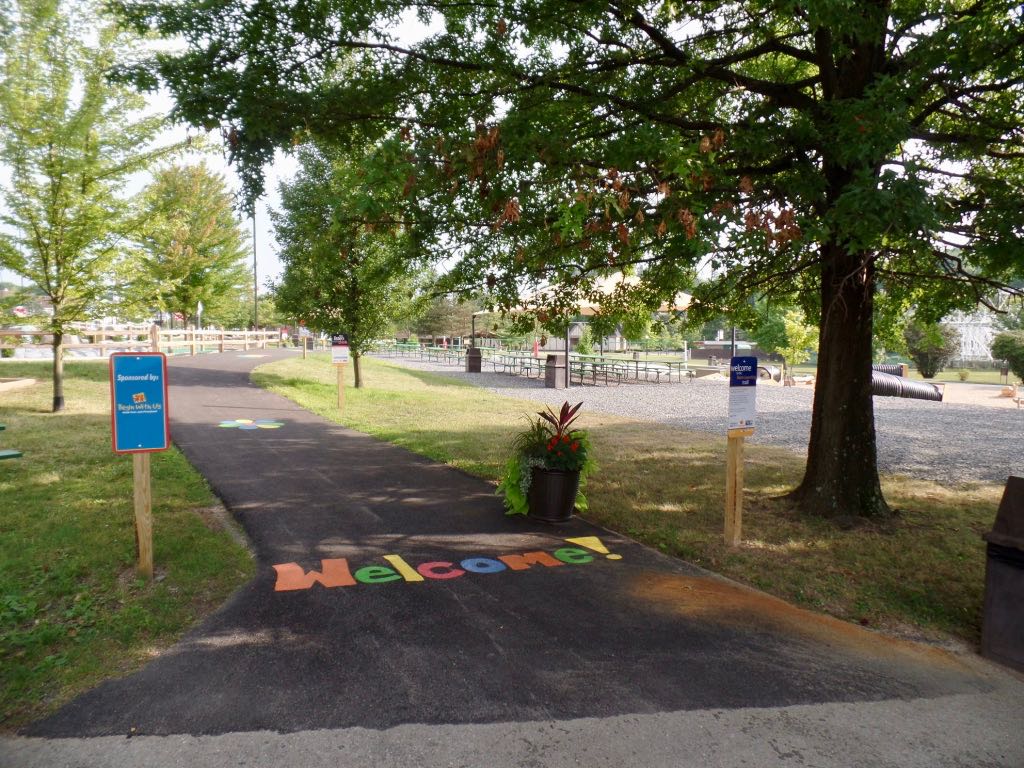 Oh well that's nice, we're welcome to things. I believe that off to the right was where the Toboggan, the tiny carnival-grade roller coaster they had last time, used to be. 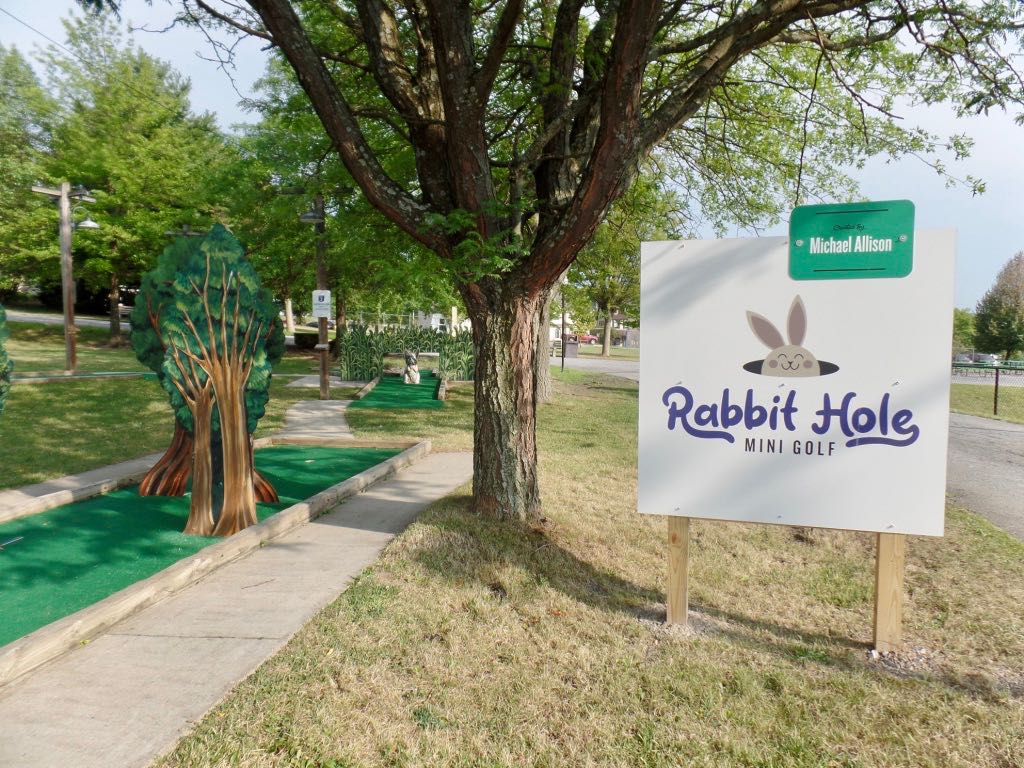 The park has got a couple miniature golf courses and we were obviously drawn to this one. 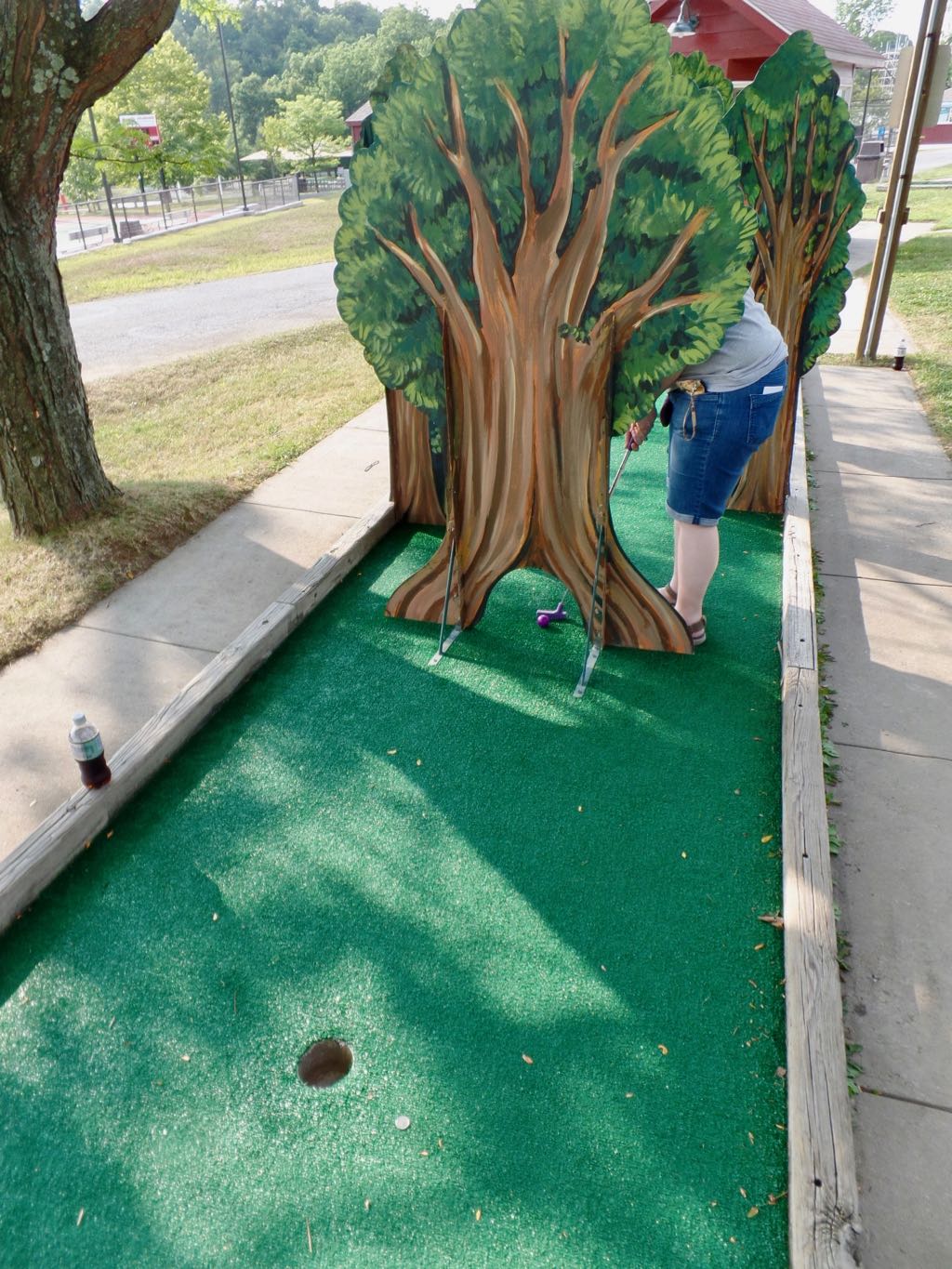 ... OK, whose great idea was playing miniature golf? The course and its props were new that year, though. 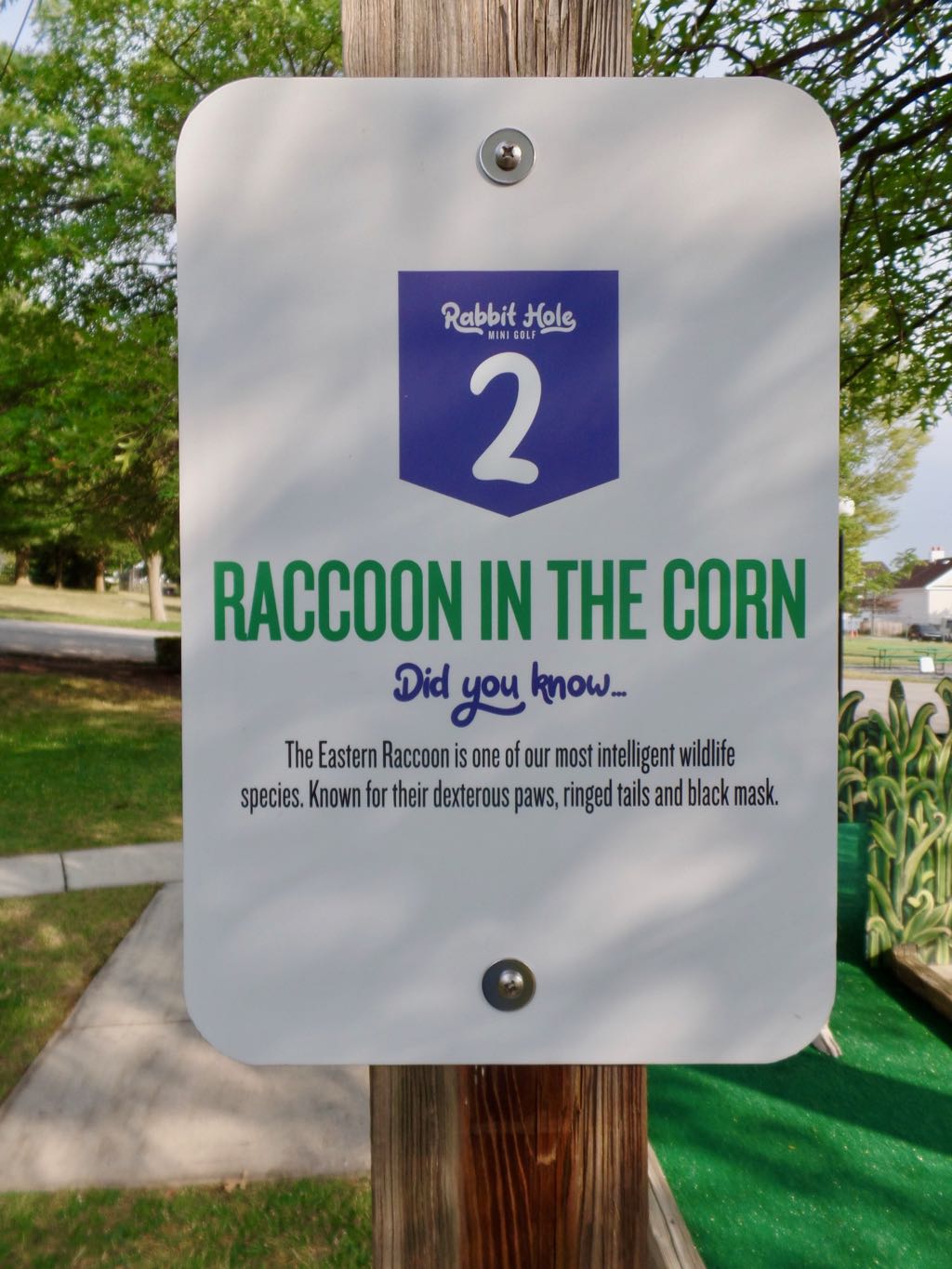 Most of the holes were themed to some mid-Pennsylvania wildlife, or plant life, and offered some facts that might even be true. Not sure what they think makes an Eastern Raccoon, though. 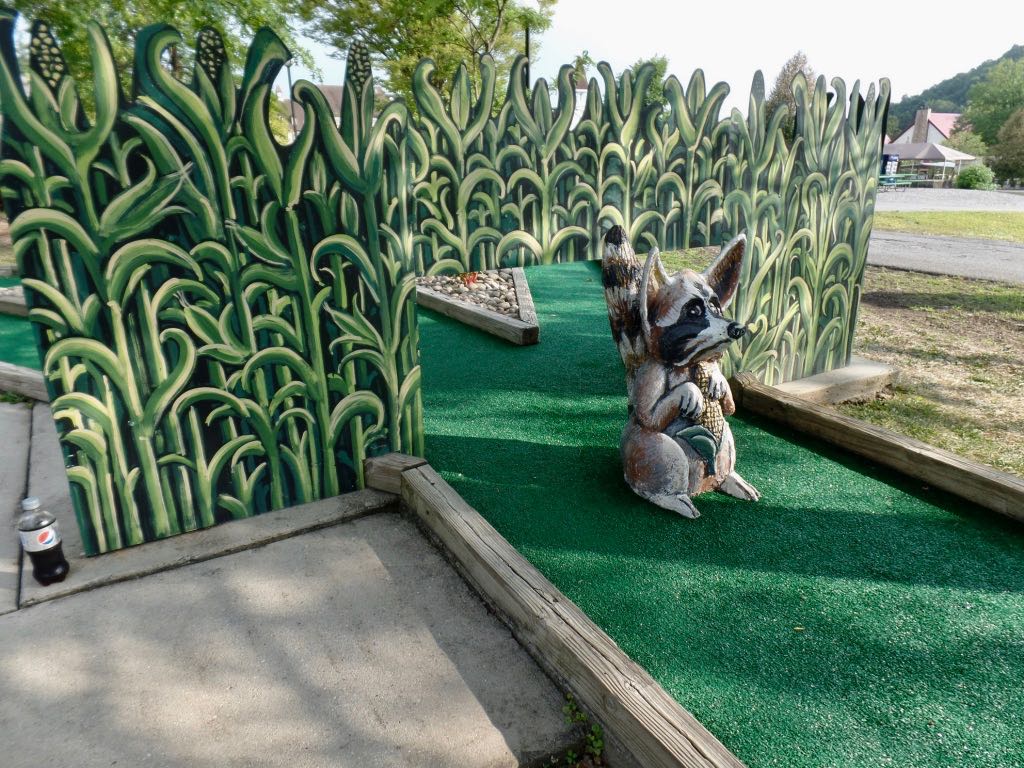 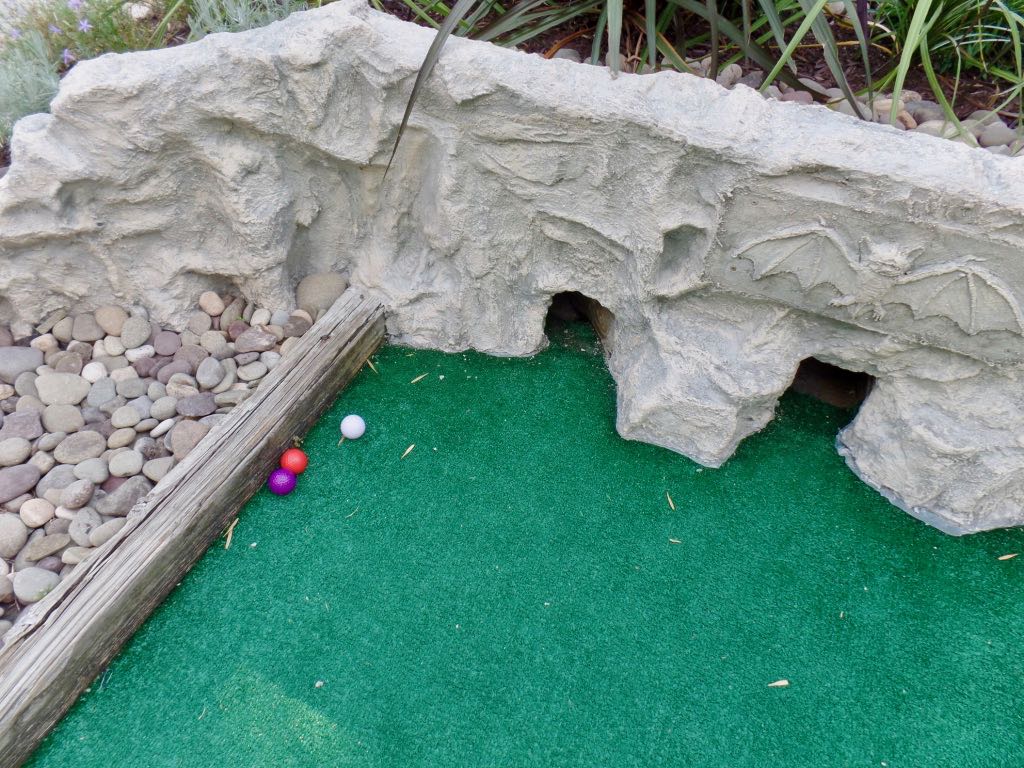 Oh, for crying out loud ... gang, can we spread out a little? 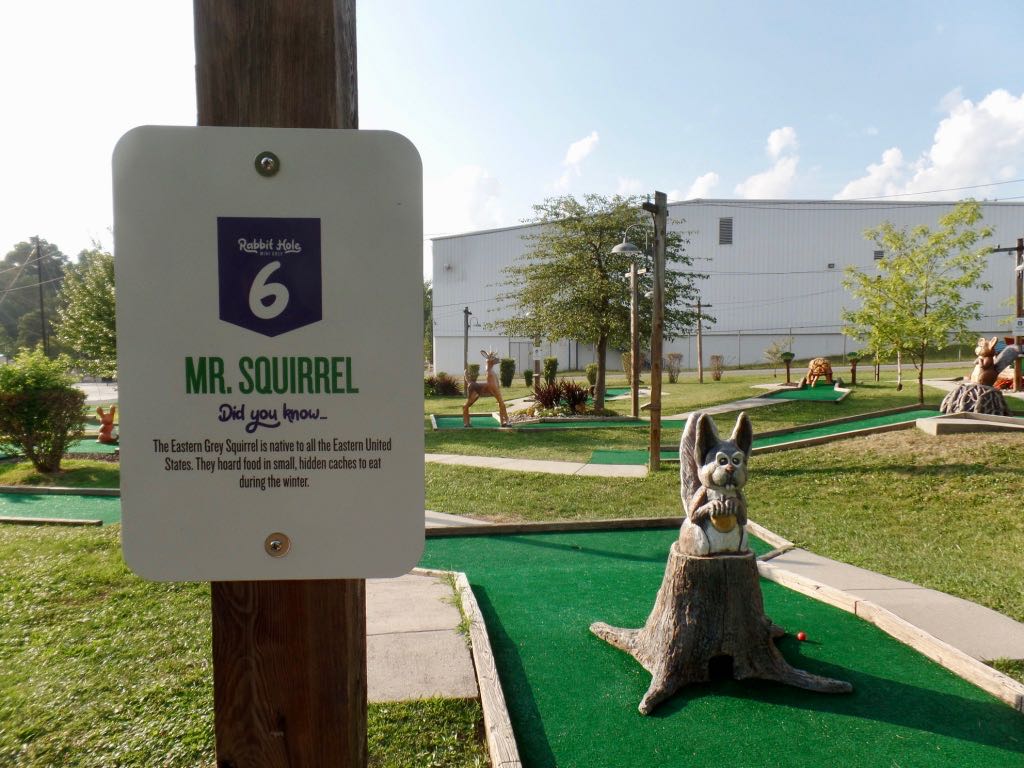 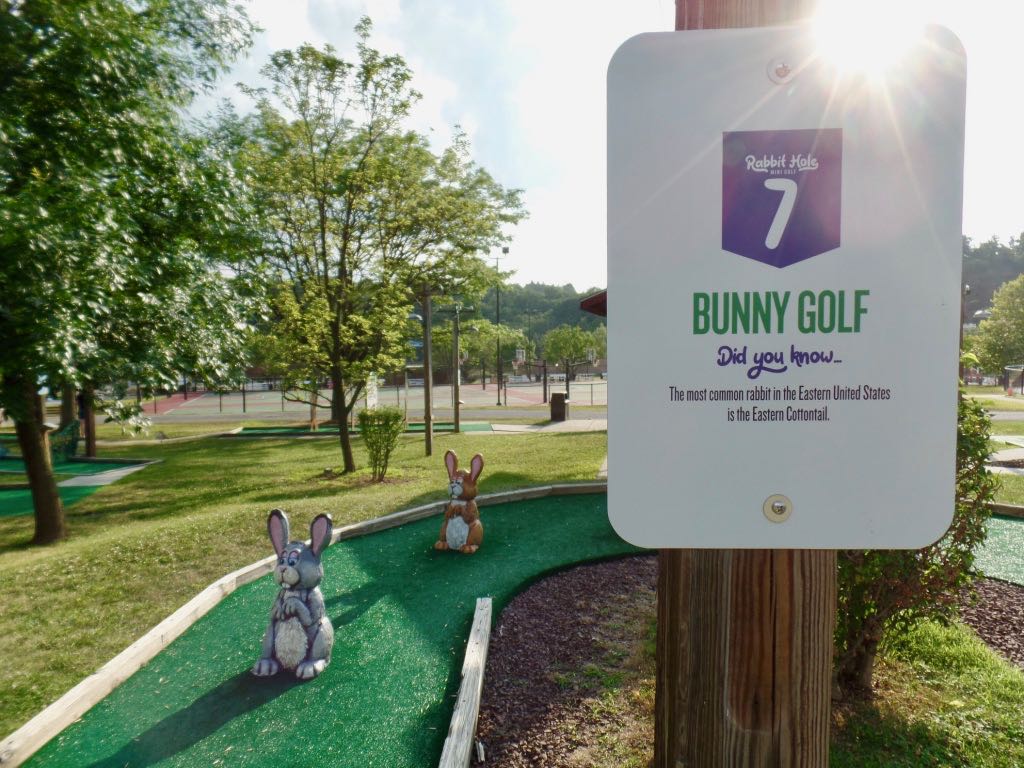 And here's the Bunny Golf hole that does not quite give the course its name. 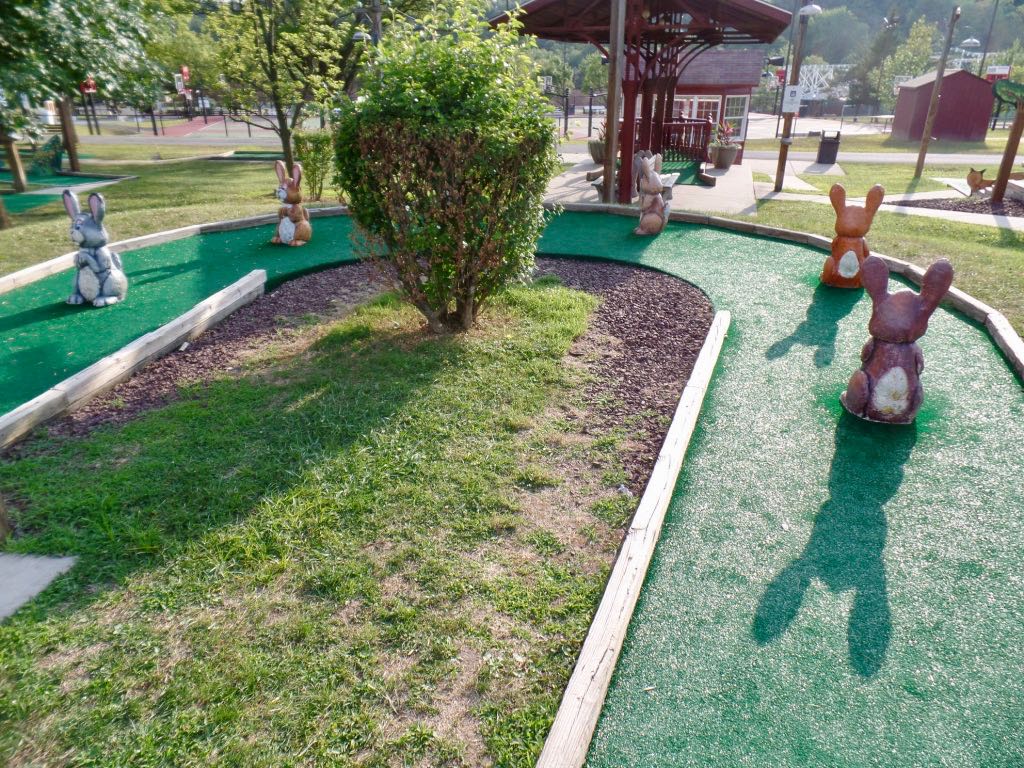 That's ... a lot of bunnies, all in a curved file like that.

Trivia: From 1954 to the end of its independent existence the Pennsylvania Rail Road paid no federal income tax, and had enough annual tax-loss carry-forwards to shelter its subsidiaries from income tax also. Source: The Wreck of the Penn Central: The Real Story Behind The Largest Bankruptcy In American History, Joseph R Daughen, Peter Binzen.