I was tense, I was nervous

Cedar Point has four more operating days this season, the coming two Saturdays and Sundays. And ... I'm thinking about going.

I know the reasons not to. Going out to inessential things spreads the disease. And there is nothing essential about an amusement park. One could argue that, like, going to the Merry-Go-Round Museum in Sandusky serves the purpose of propping up their shabby finances. But Cedar Point's parent company thinks it has enough cash on hand not to be in a crisis even with another year of being closed. We would be going because we want to go an amusement park.

I can rationalize why it's all right. Although I have insisted the amusement parks should not have opened, it does appear that no park can be traced to any real outbreak of Covid-19. That they're running at lowered capacity, and not doing indoor events, surely helps. An amusement park is mostly people being outside. A late October or early November day? If the weather is not good? If it's like our previous November-closing-day experiences that's some sparse park-going. It's easy enough to wear a mask --- we'd likely have a scarf over our faces anyway --- and with gloves all day won't even be touching metal bars other people have rubbed.

But I recognize the motivations behind this reasoning too. A big part is that

bunny_hugger and I have been really good, possibly the best of any of our friends, about not doing inessential stuff. We've gone to drive-ins. We went to the zoo once. We've had a friend over to sit outside, at a distance. We've visited her parents and sat outside, at a distance. Weather Underground has completely forgotten my ``Recent Cities'' profile, places like Fremont and Sandusky and Muskegon and Columbus that we don't see anymore. I think maybe

moxie_man is the only one more abstemious. As we see through Facebook or other means that friends are just ... going out, hanging out in bars, acting as though wearing a facemask is all they have to do, as opposed to the minimum you must do ... it feels like, you know, why don't we get a fair share?

I mean, if everyone had been as good as we've been --- we haven't even had take-out or delivery through the pandemic! --- there wouldn't be a pandemic by now. But there is still a pandemic, and it's worse than it was in April, and it's not like bad choices now won't make it worse still.

Pressing on me is the realization that, jeez. We've had nothing normal since March. We aren't going to have anything for ages to come. We can't go to Bronner's for

bunny_hugger's mother has rejected our getting together in person for Thanksgiving. There won't be any competitive pinball --- nothing sanctioned, anyway --- for, jeez, it's got to be another half-year at least. It's possible that we might yet talk

bunny_hugger's mother into an in-person Christmas, maybe, but even so it'll be impossible to talk her into having

bunny_hugger's brother in from Brooklyn. It would take a miraculous collapse in Michigan Covid-19 rates for MJS to hold his pole barn New Year's Eve party, or for us to attend. Maybe we'll be fortunate, we'll get Democrats into every position of power, we'll get a vaccine. But --- consider the Copernican argument. There is a better than 50% chance we are not yet at the halfway mark of this. Even if we are at the halfway mark then it'll be June before things are normal and July before we can finally have Motor City Fur[ry] Con. Maybe. If things start going well.

In light of that, is it wrong to grab selfishly at being able to spend eight shivering hours at Cedar Point?

That I am making excuses for why it is all right is probably a clear argument it's not. And, like, even if we do go, the best that can happen is we don't cause anyone to get sick; it's not like we will have a life-affirming experience on the Mine Ride. But there are reasons we have celebrations in the middle of winter. A bit of festival makes more bearable a long and cold and barren stretch.

And it would be so nice to do something normal.

Well, let's look at something without any but the usual moral quandaries: Friday at Pinburgh 2019. This, too, closes out the day as I took few pictures apart from stuff like scorecards, none of which were amazing enough that I want to share them. 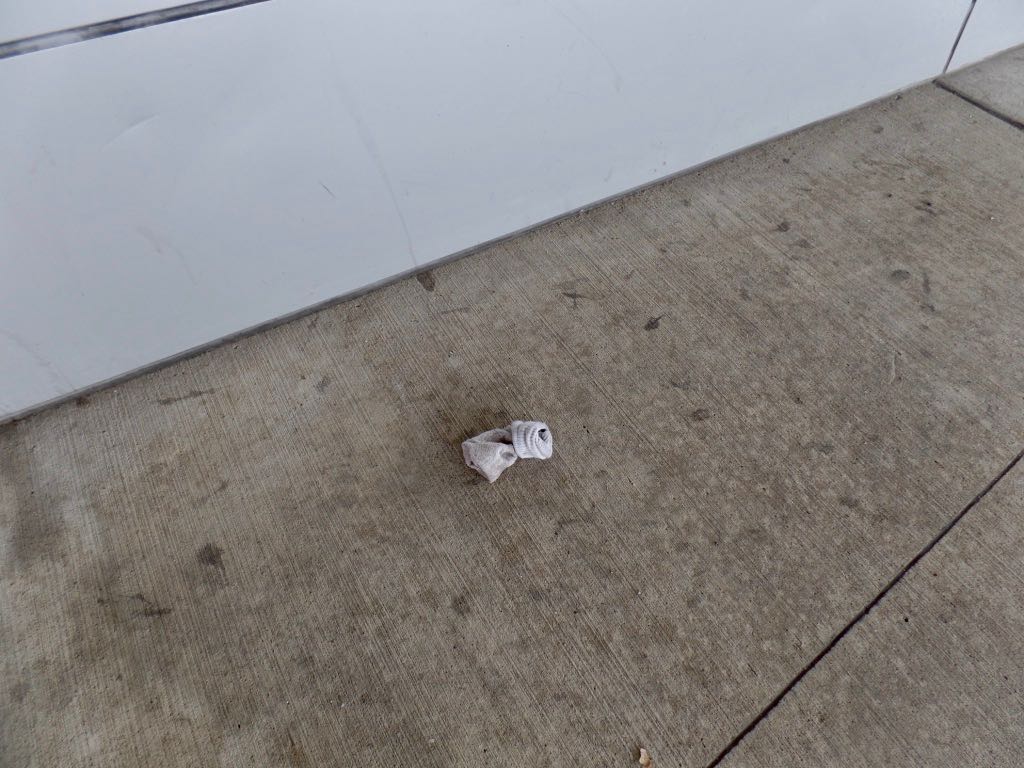 And there on the sidewalk, as we walked from lunch at the pierogie place: one lone used sock. Its origin and purpose still a mystery. 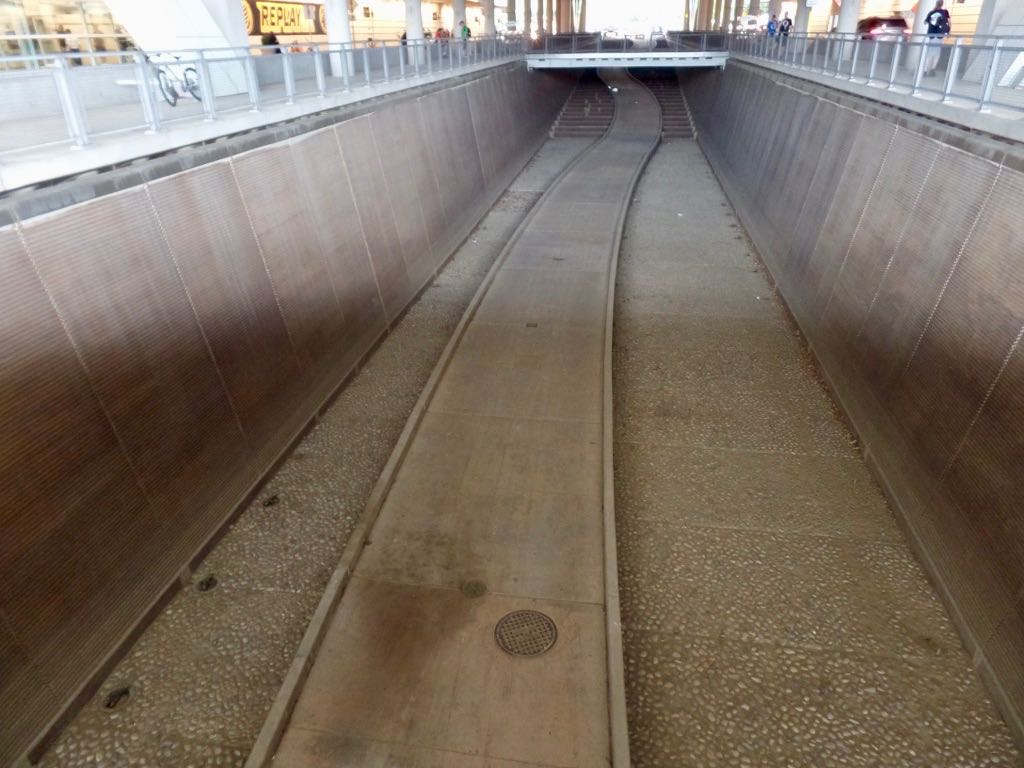 The waterfall and 'river' through the median underneath the convention center was shut down, for some kind of work going on. We were looking forward to seeing it back in normal operation in 2020. 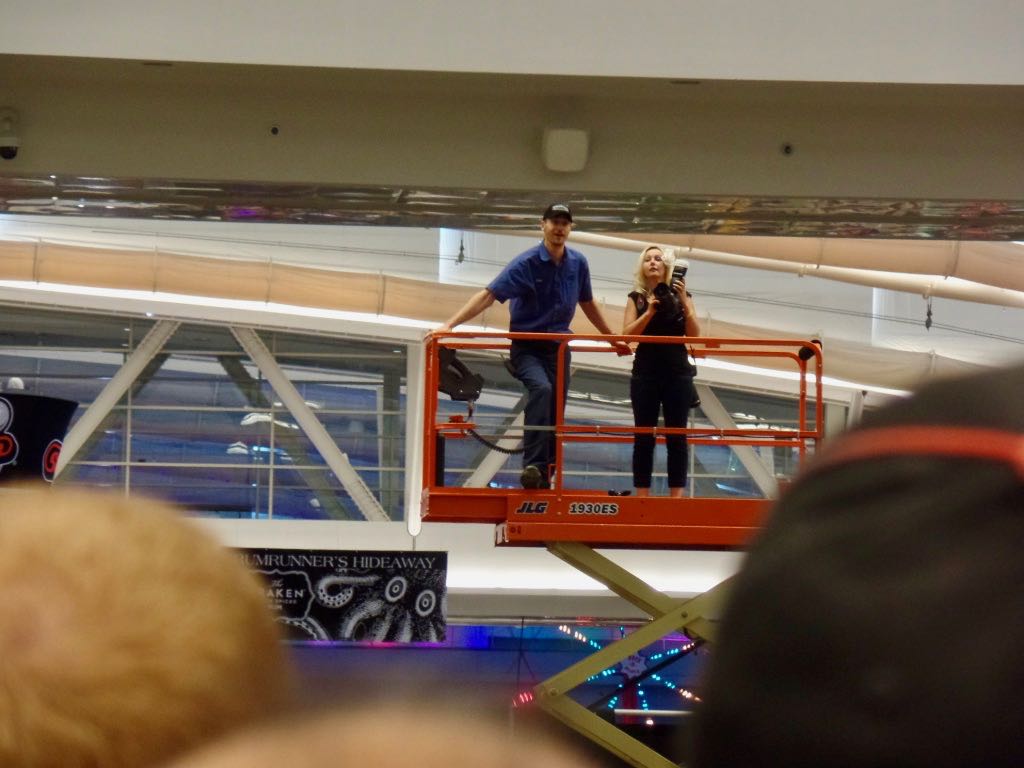 They got us all together for a group picture so I went and took a picture right back at them. 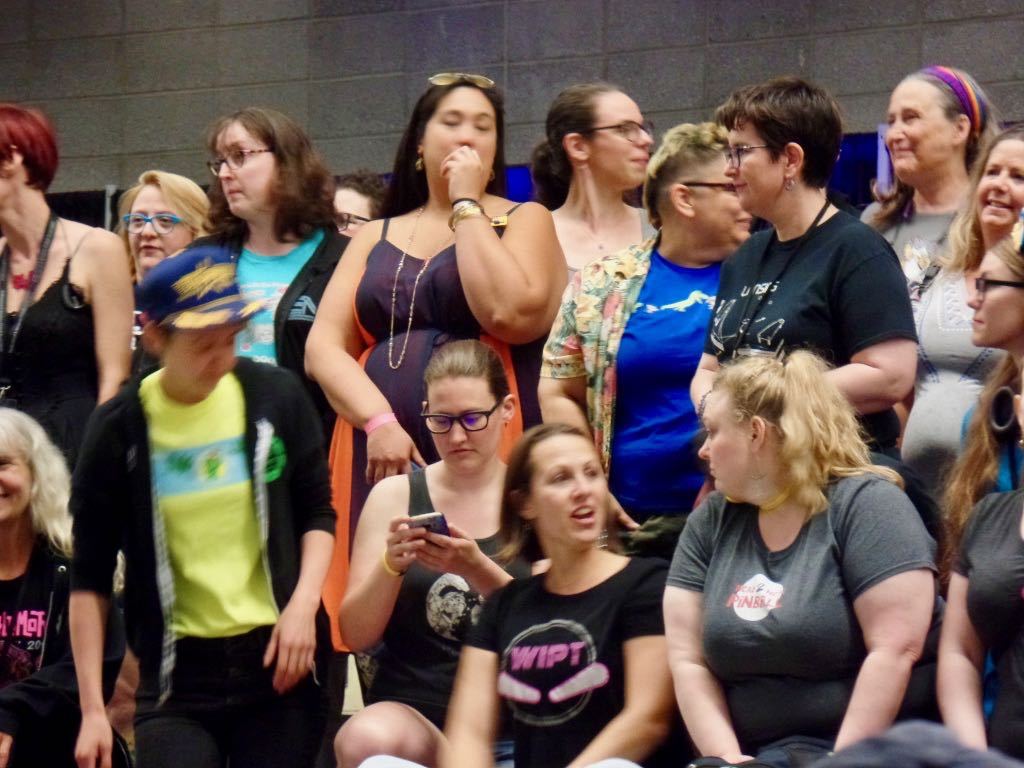 bunny_hugger joining the other women on-stage for the group women's shoot. 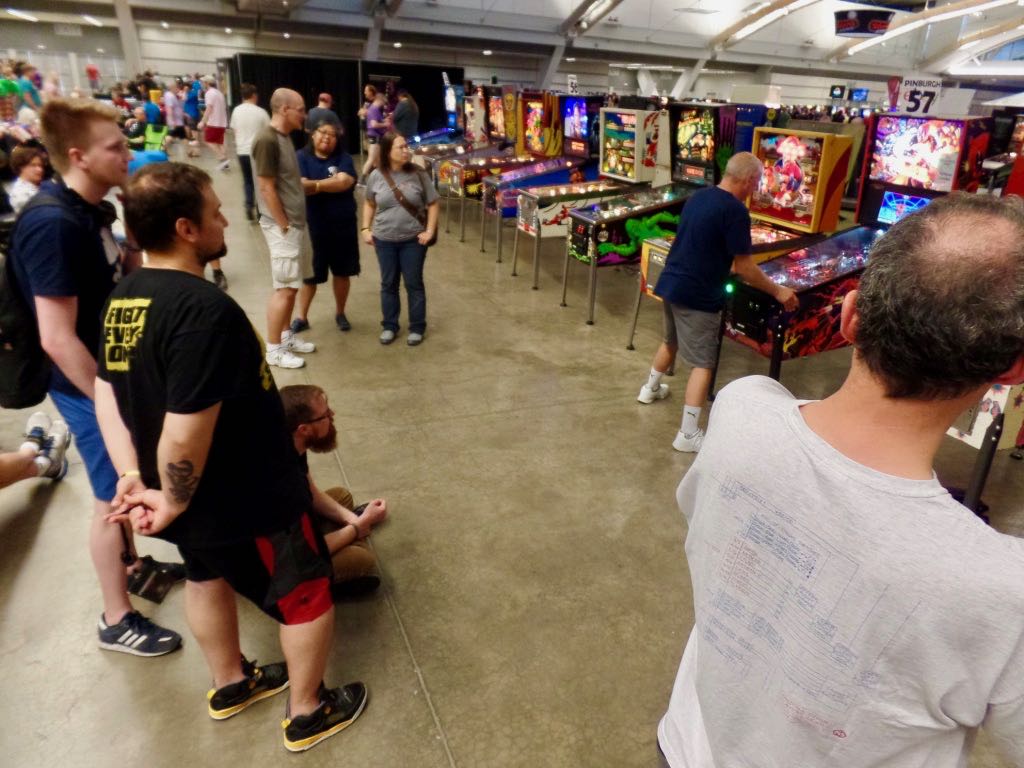 Yeah so some groups are just going to keep on taking their time playing Deadpool and hold up the tournament from the next round. (Not actually, not this time; it was a different group that ran so long on one game that even after Pinburgh invoked its new you-can-stop-now rule, it delayed the next round for everybody by a half-hour plus.) Fourth bank for the second day. Rolling Stones I worked out how to play using the base logic of 'this is a Stern pinball game. There's some shot that, repeated, will start multiball. Pick one and try it' and what do you know but it worked. Minizag I feel like I play every Pinburgh, and I always feel like I should be good at it, and I am not. 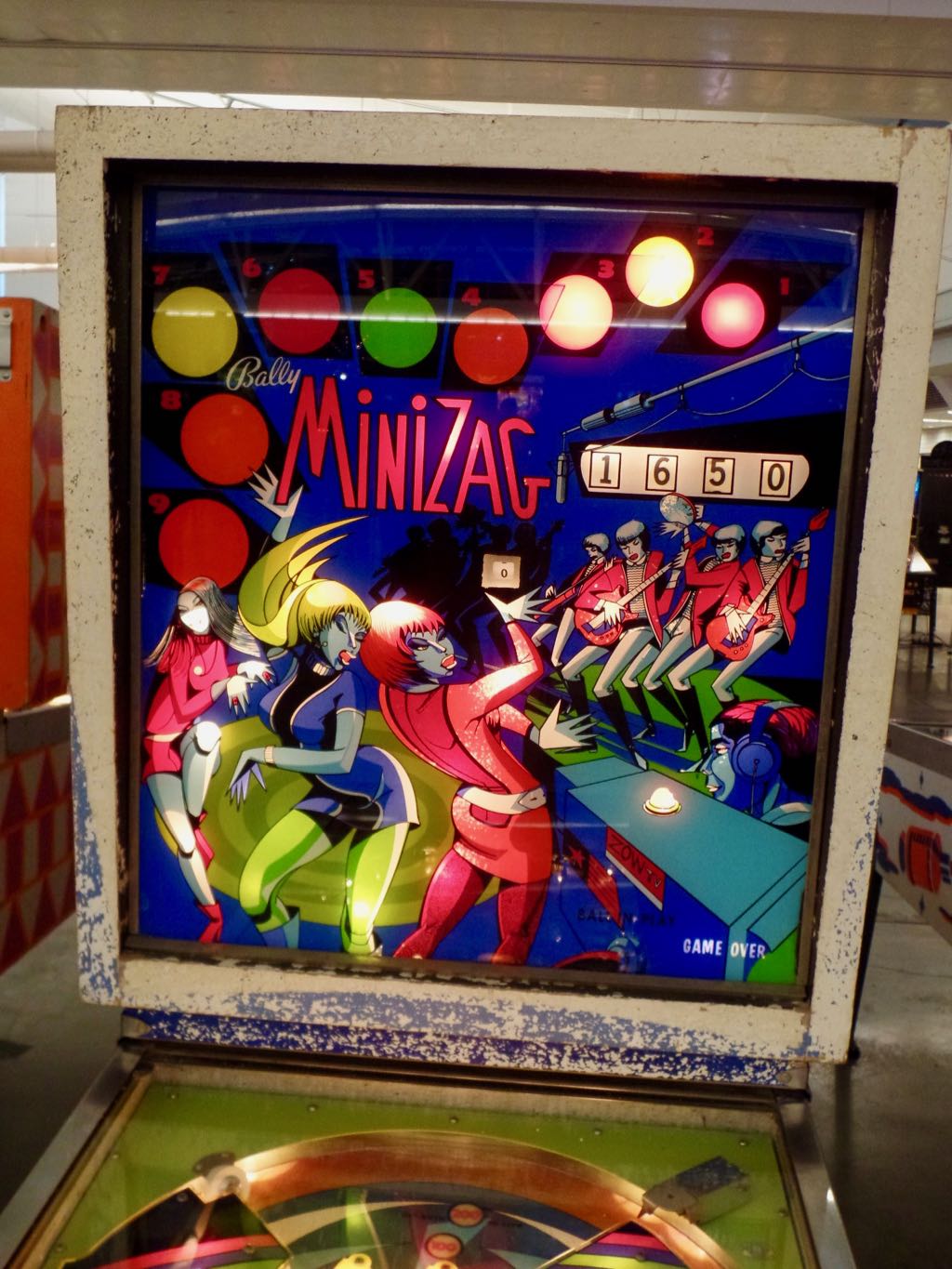 Still, that's some great stylized art there. Look at those bodies. 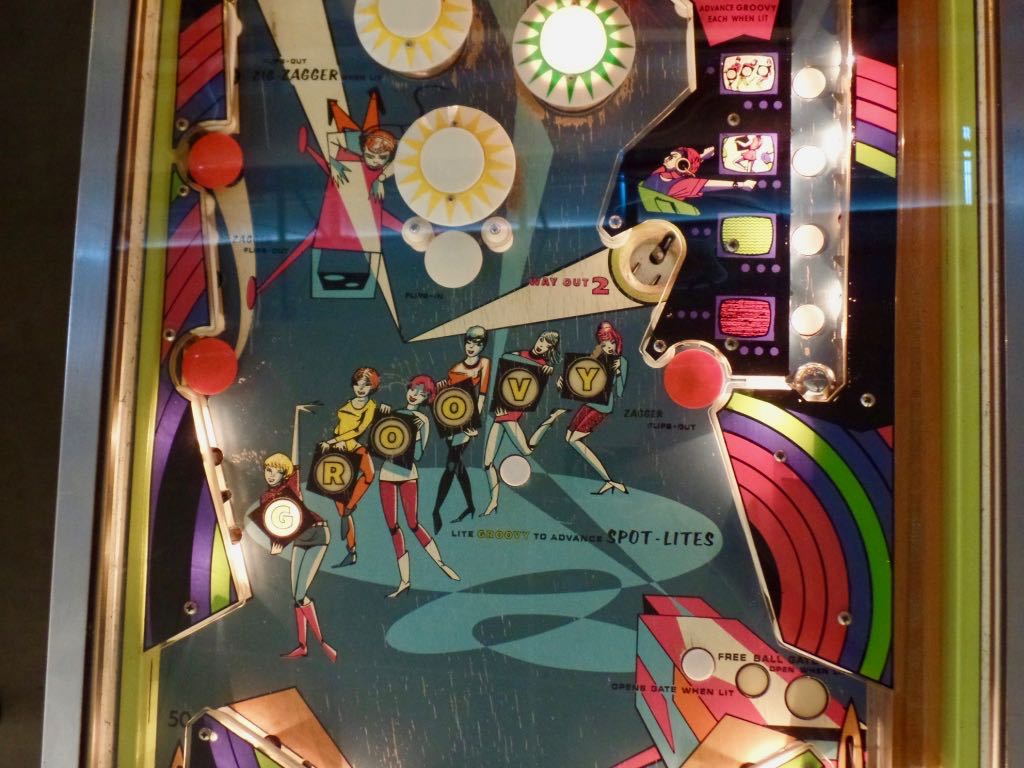 Middle playfield for MiniZag. Again, great, spectacularly pop-art bodies and a message for their time. 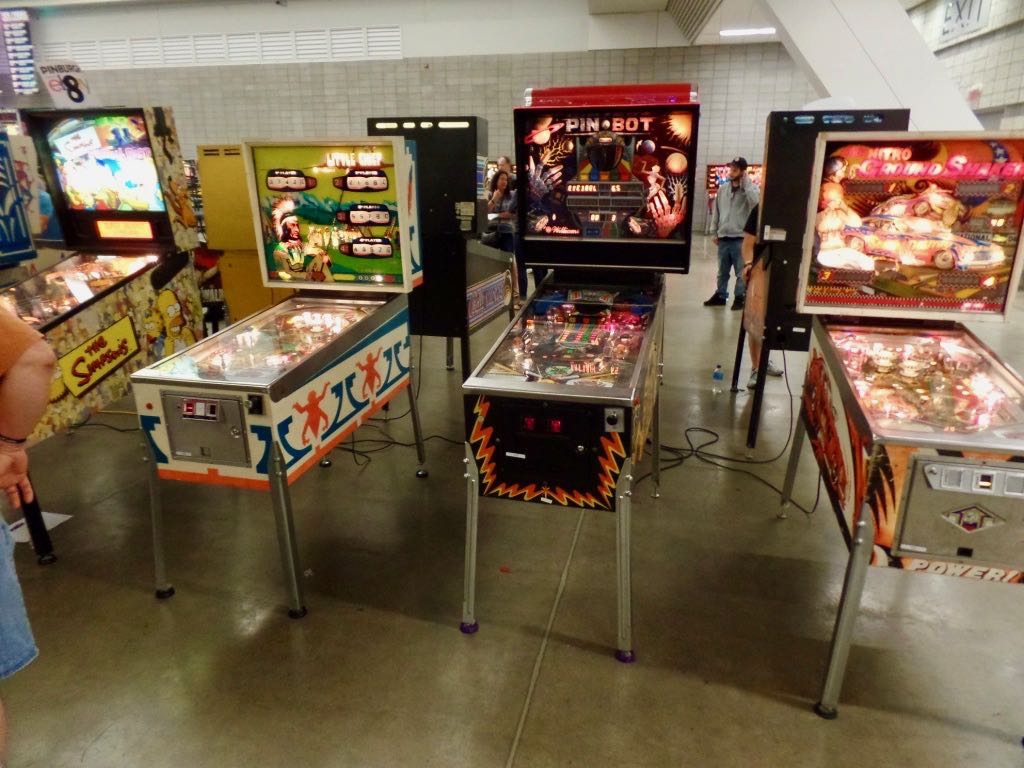 So Pinburgh 2018, on that Simpsons, in my famous and controversial two-player group, my opponent put up 22 million --- always a good score on that table and absolutely spectacular for one in Pinburgh tournament conditions --- and I went and put up 40 million on the poor guy. Anyway, so, this time around? I put up the worst game of my life. (Not quite, but close.) (Sigh.) FINE, Pat, you can play pinball, can we just FINISH and GO HOME some of us have playoffs in the morning? 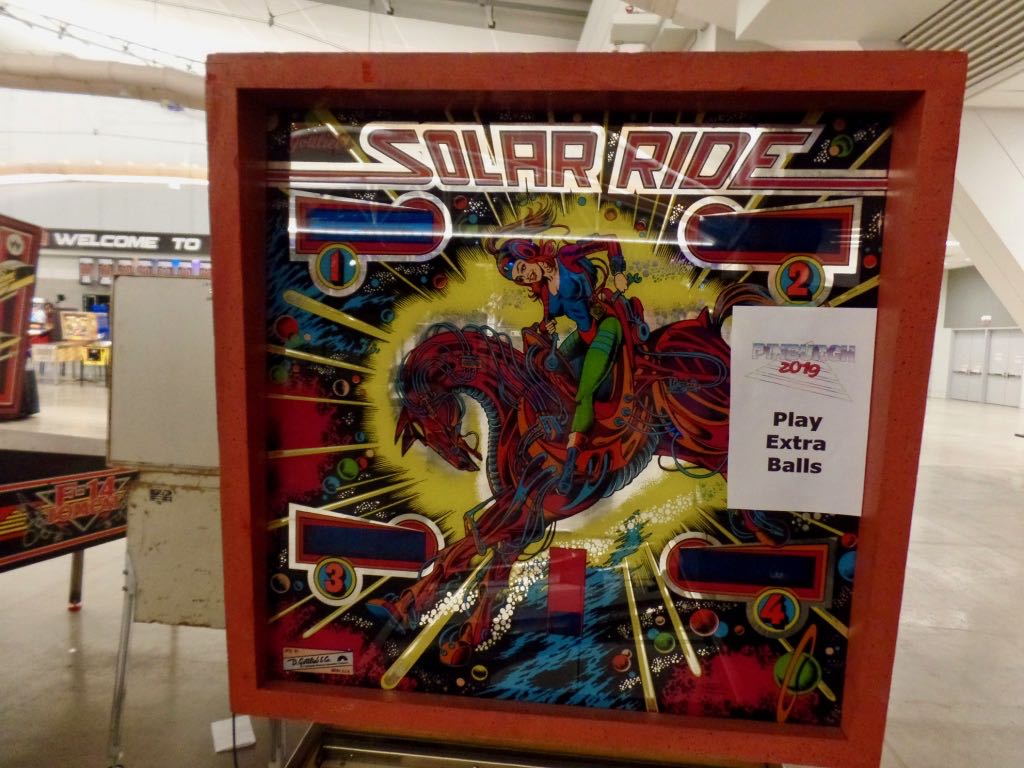 Early-solid-state game, from the era of making backglasses that would rather be the covers for bonkers science fiction novels of 1978. 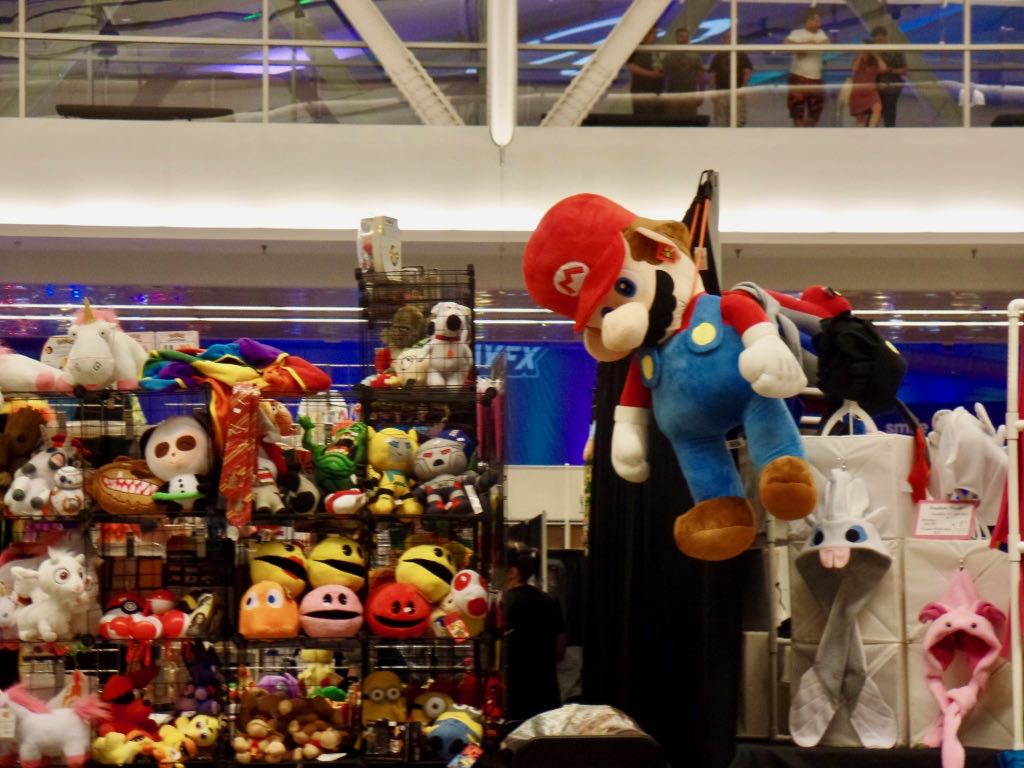 Merch table that also looks like Mario refused to heed the Syndicate's warnings.

Trivia: In 1801 the New York State Assembly declared there should be a translation of old colonial records from Dutch into English. In 1818 the work began with one man, Francis Adrian van der Kemp, translating twelve thousand pages into English over the following four years. van der Kemp was going blind and had a faulty command of English to start with, and his translation was apparently quite bad. The sole manuscript was eventually lost to a fire. Source: The Island at the Centre of the World, Russell Shorto.

PS: Using my A to Z Archives: Smooth, maybe the first time anyone has noticed this essay since I published it.